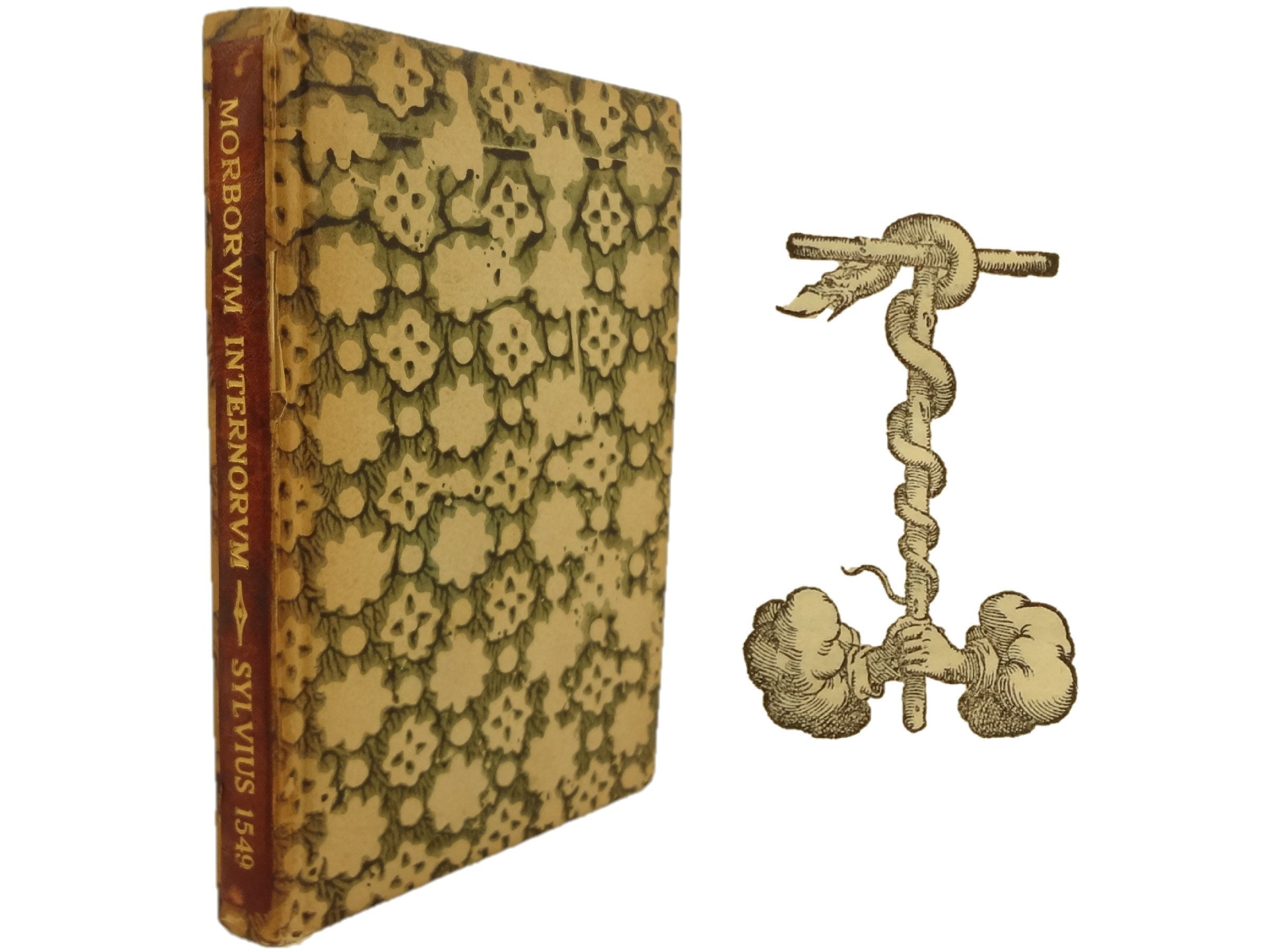 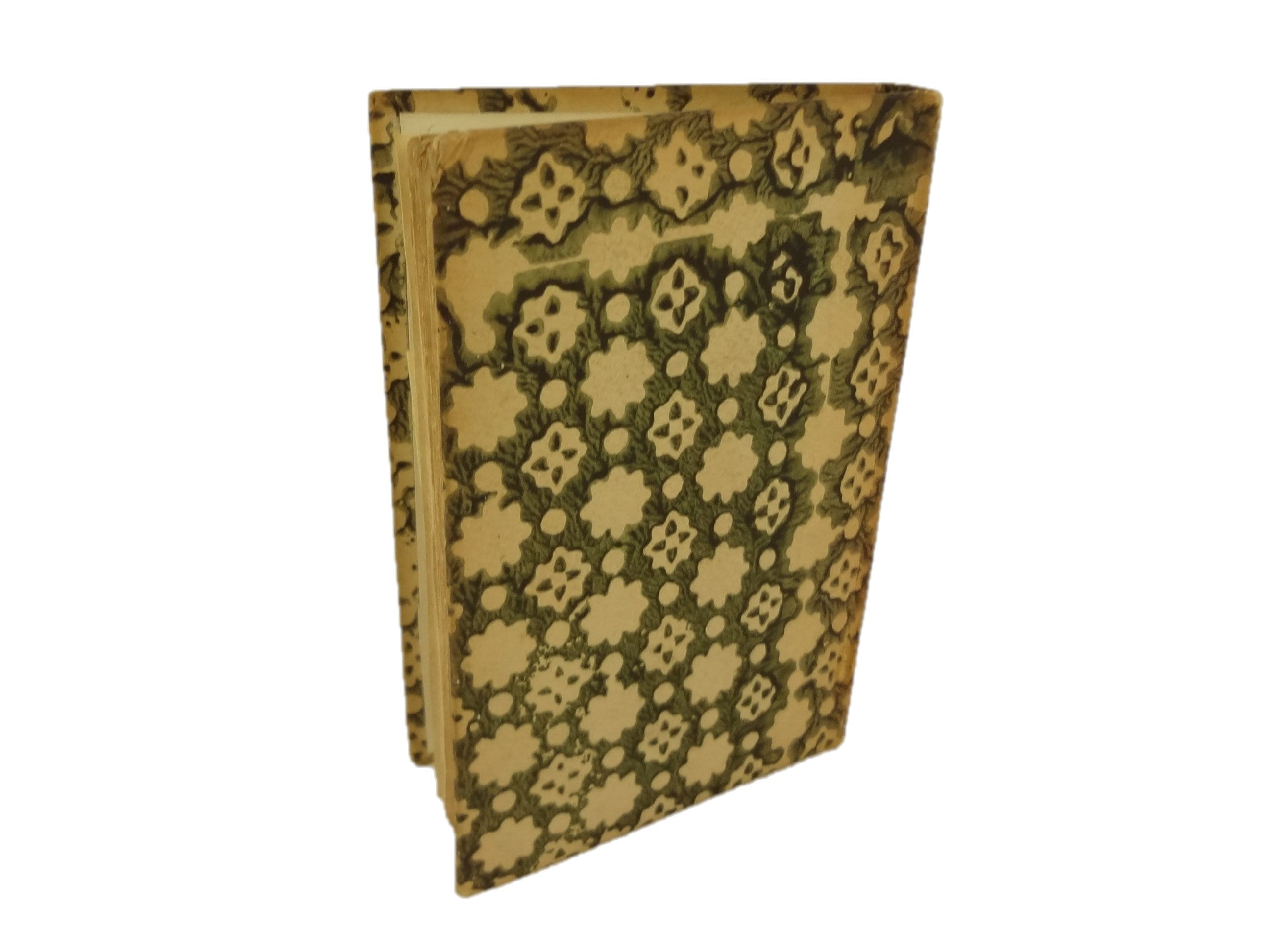 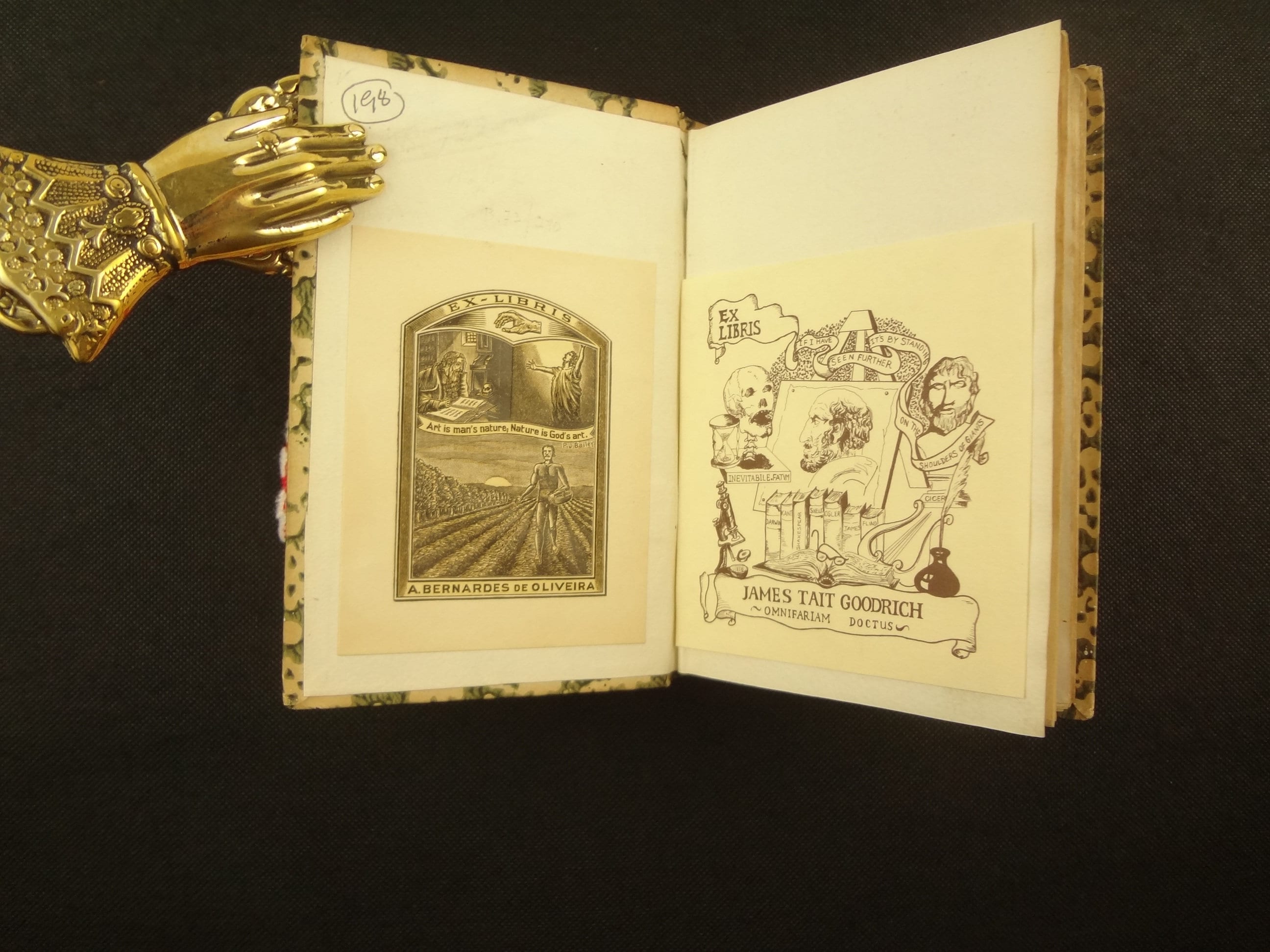 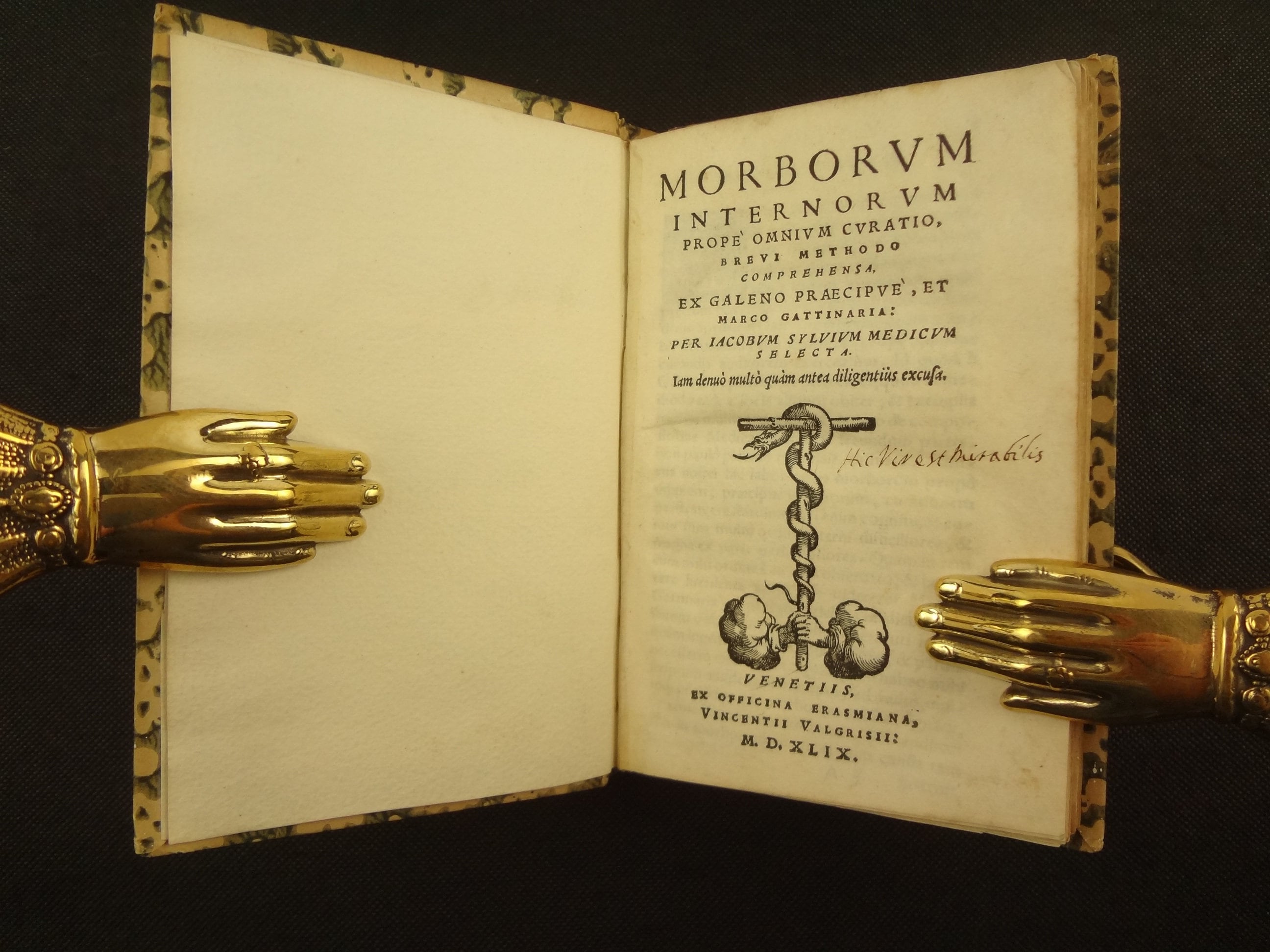 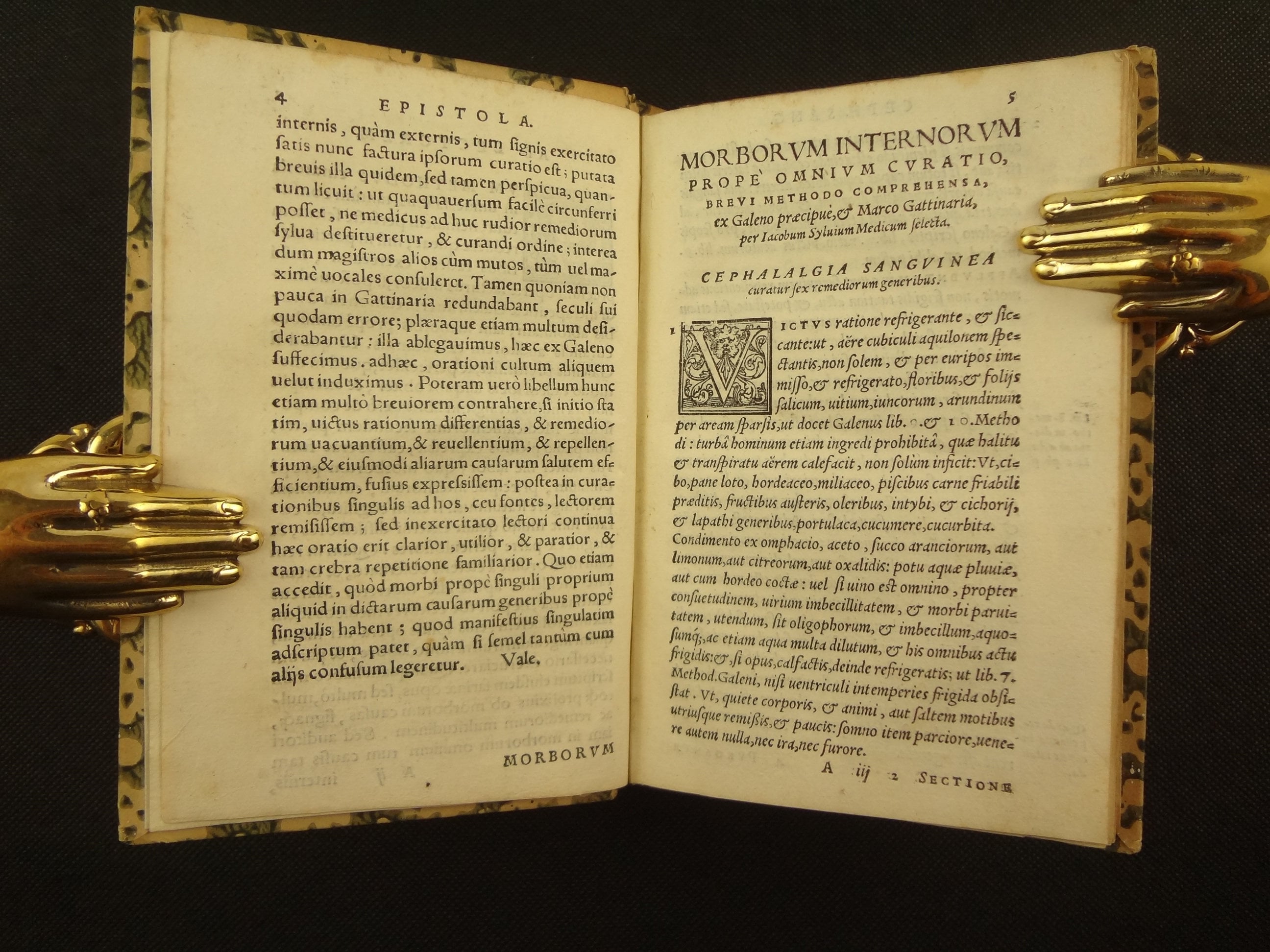 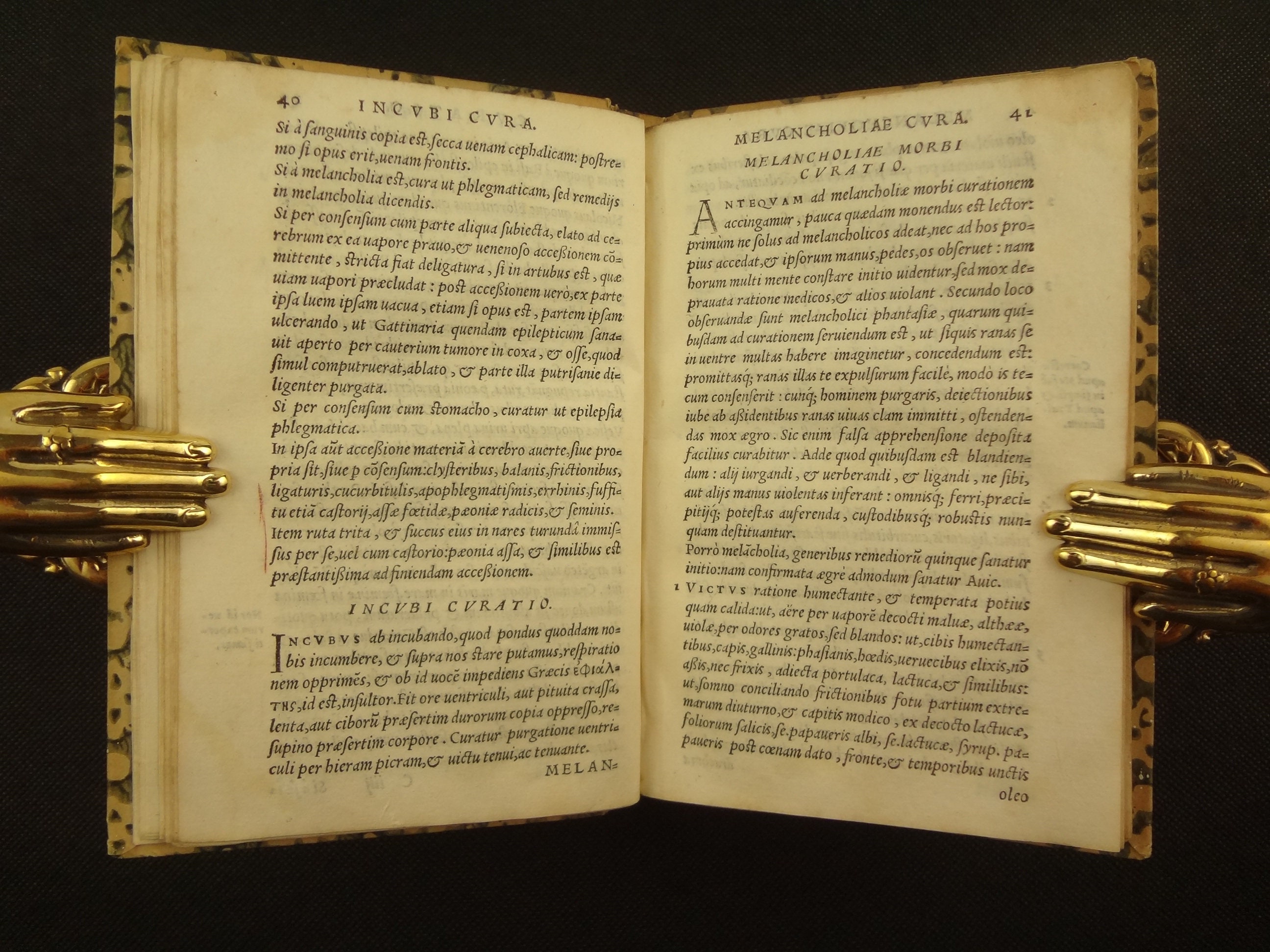 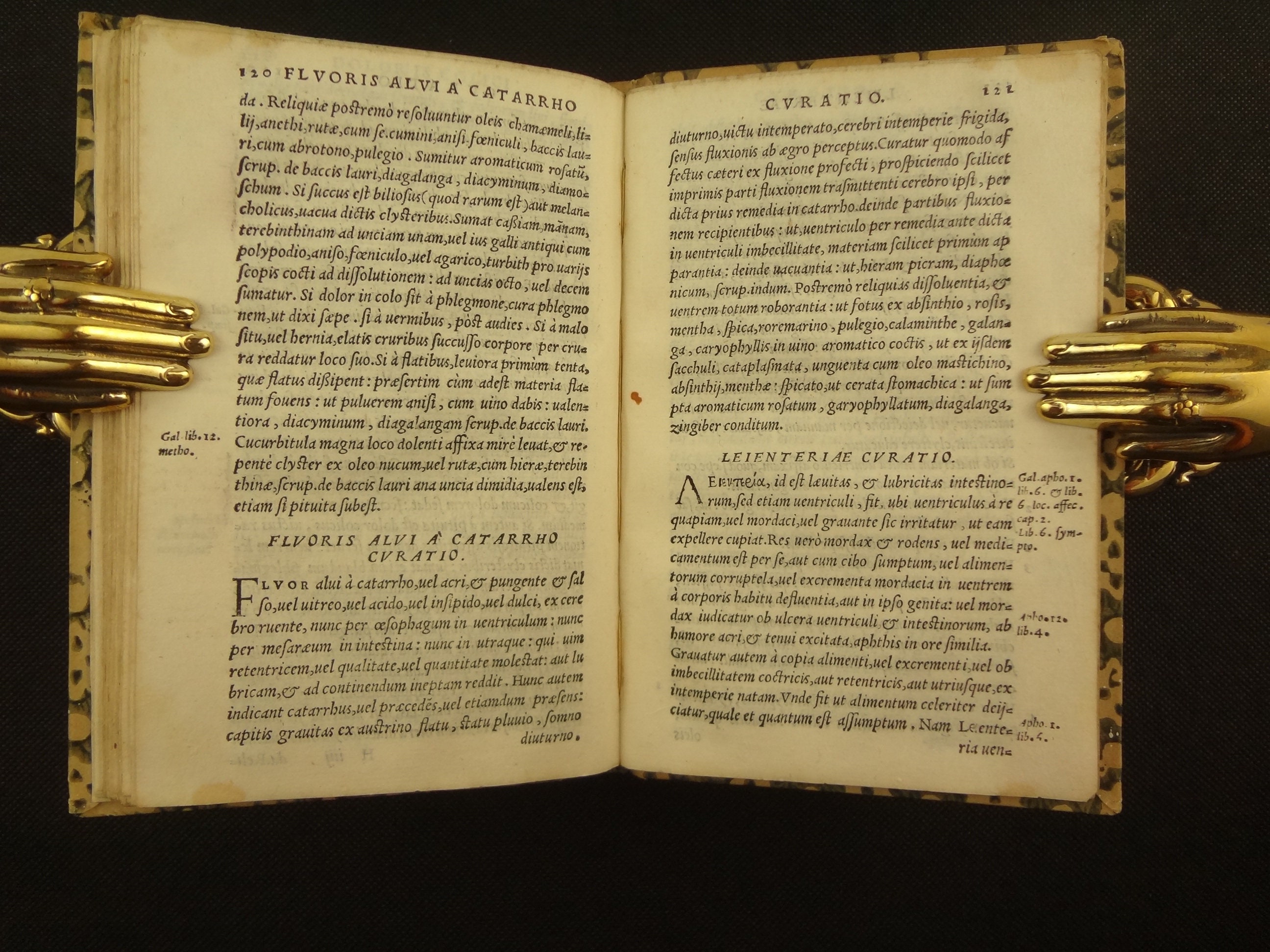 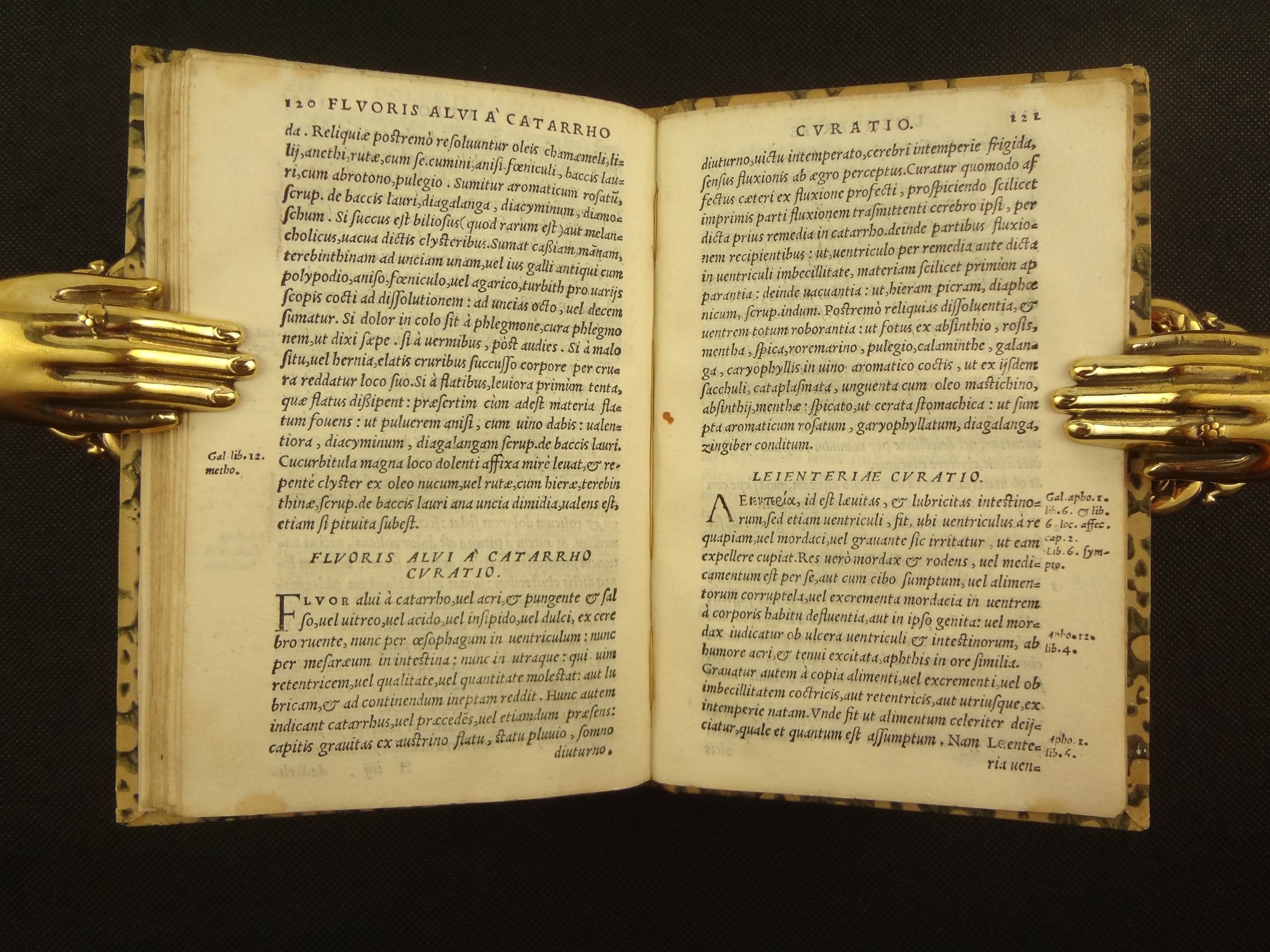 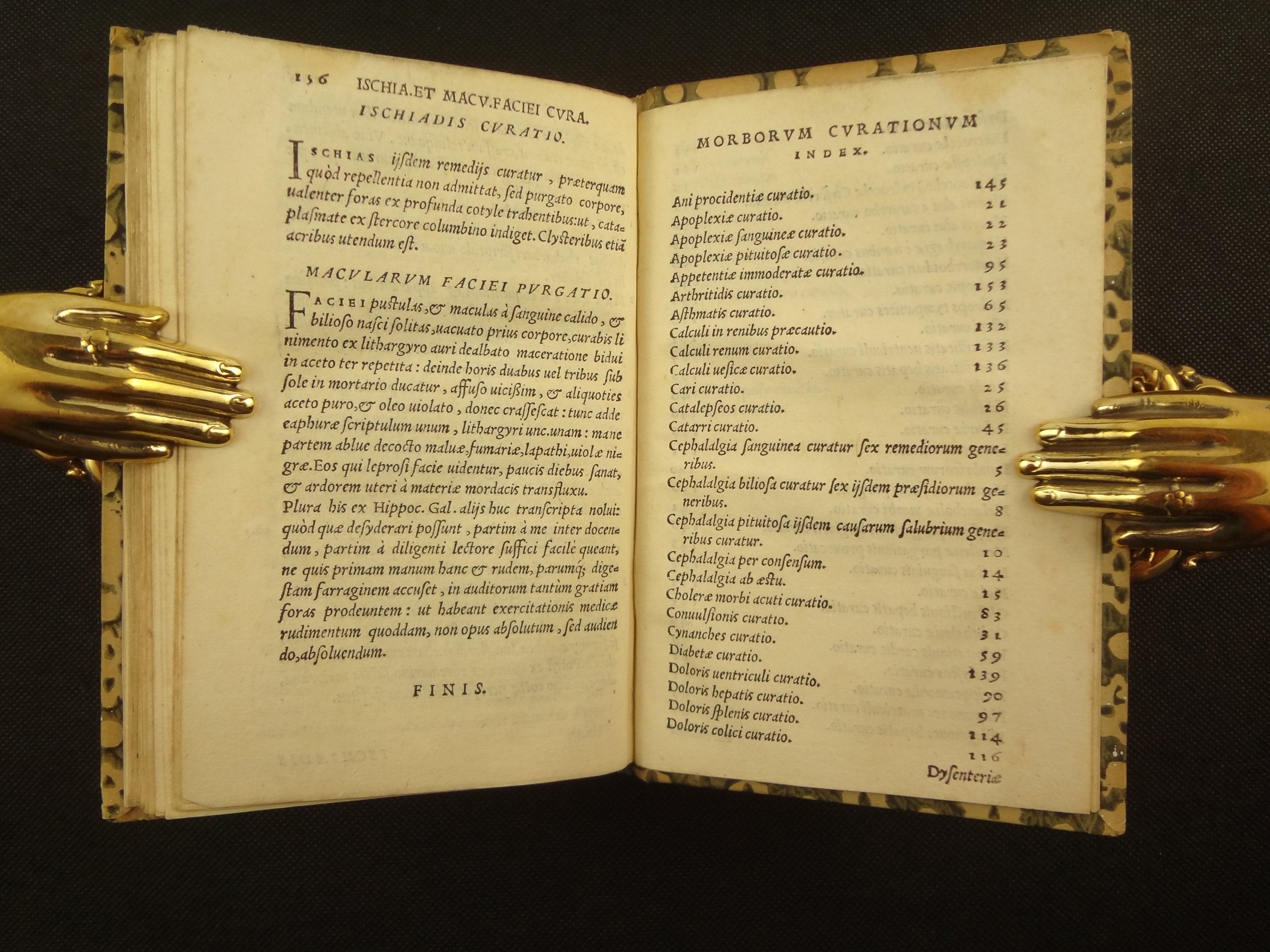 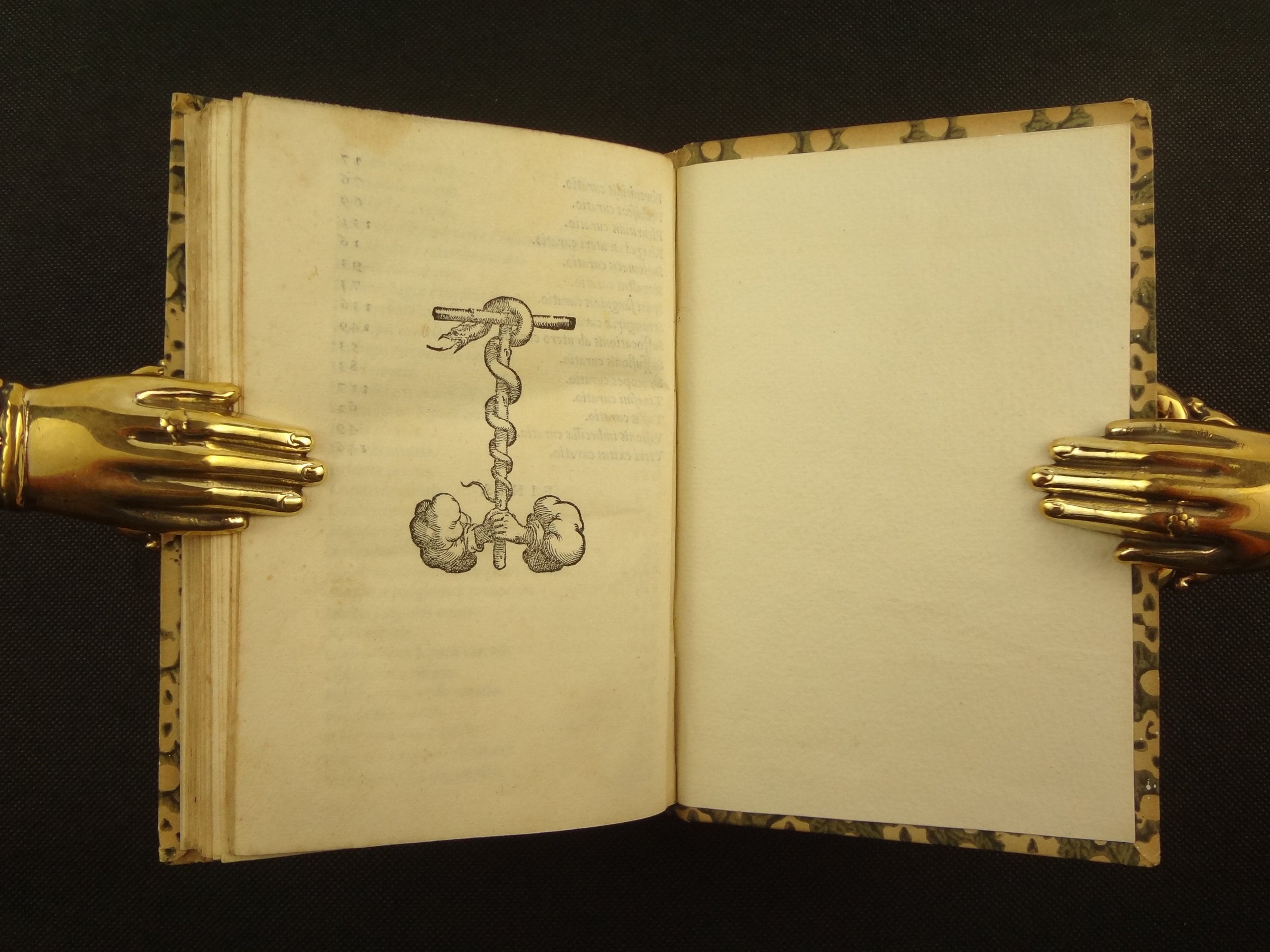 A to-the-point work, meant to be used in the diagnosing and treating of many maladies. The title best describes the work, roughly translated as, "The treatment of all internal diseases, comprised by a short method, chiefly from Galen and Mark Gattinara, selected by the physician Jacob Sylvius.

The format is similar to a modern medical encyclopedia, with a heading naming an illness, a short description of the characteristics, followed by the actions to be taken. At the rear is an index with a list of the illnesses.

Jacques Dubois (Sylvius) was born in 1478, and became a French physician and anatomist. He was fiercely loyal to the teachings of Galen. He taught medicine, and is attributed to having over 400 students; his first engagement was at the College de Treguier, and then he moved to the Royal College in 1553. His funeral was marked with a scandal, as the following epitaph was found on his grave:

"Here lies Sylvius who, during his lifetime, never gave anything for nothing. Dead, he is still sorry that we can read this line for free."

Yes, despite this, in an "old hand", the title page of this copy states, "Hic vir est mirabilis", roughly translated "This man is marvelous".

Valgrisi was an important Venetian printer, with over 200 works attributed to him. An act-of-sale documents that Valgrisi acquired a bookshop at the sign of The Head of Erasmus in 1532. In 1570 the Roman inquisition fined him 50 ducats (about 6 oz of gold) for selling prohibited books, including his imitation of Holbein's Dance of Death.

Bookplates of A. Bernardes de Oliveira and James Tait Goodrich, 20th century doctors. Oliveira was also an author, and Goodrich was also a bookseller.

See pictures. Some wear at corners and edges of binding; spine discolored from sunning. 1" crack along front joint, very narrow and the joint is holding well. Pencil (and most erased) bookseller notes on the pastedown. Ex libris of A. Bernardes de Oliveira on pastedown, plate of James Tait Goodrich loose. Some toning near the edges, occasional thumb, dog-eared page, fox spot, etc.. throughout. Title page with "Hic vir est mirabilis" written next to the printer's mark. Some marginal annotations, marking and underlining throughout. Occasional moisture intrusion at edges, touches marginal printed notes, headings, etc. near edges.