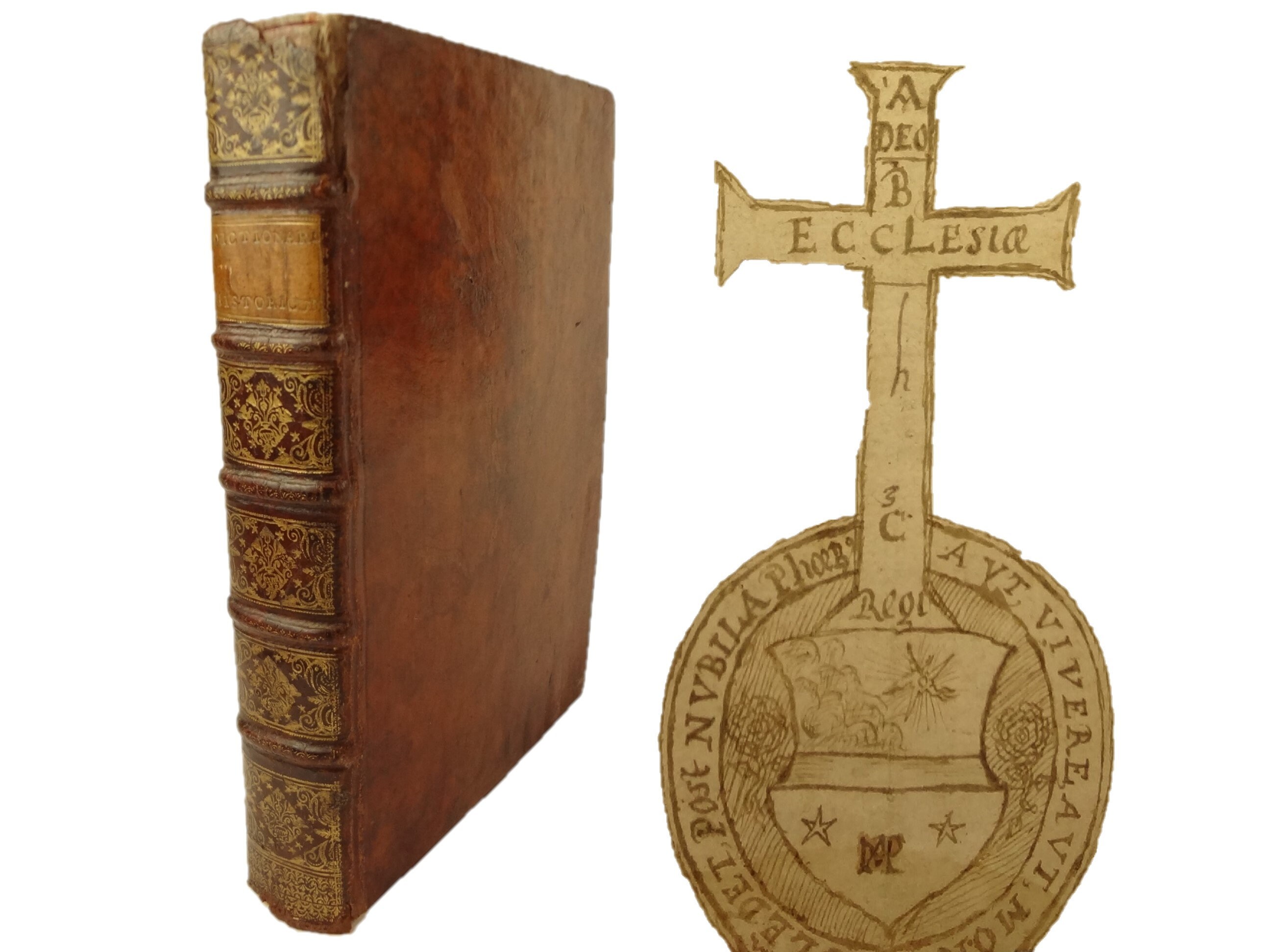 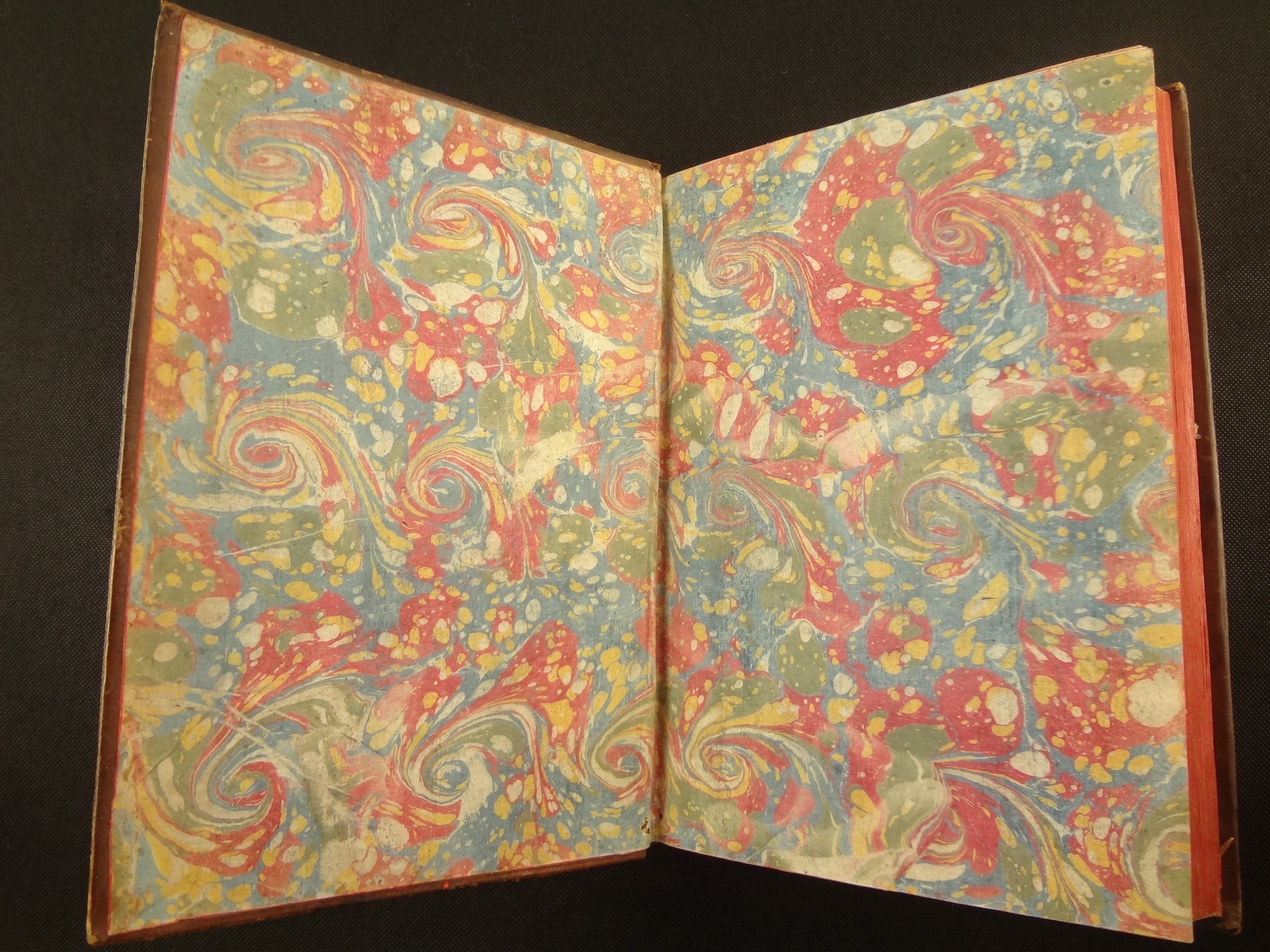 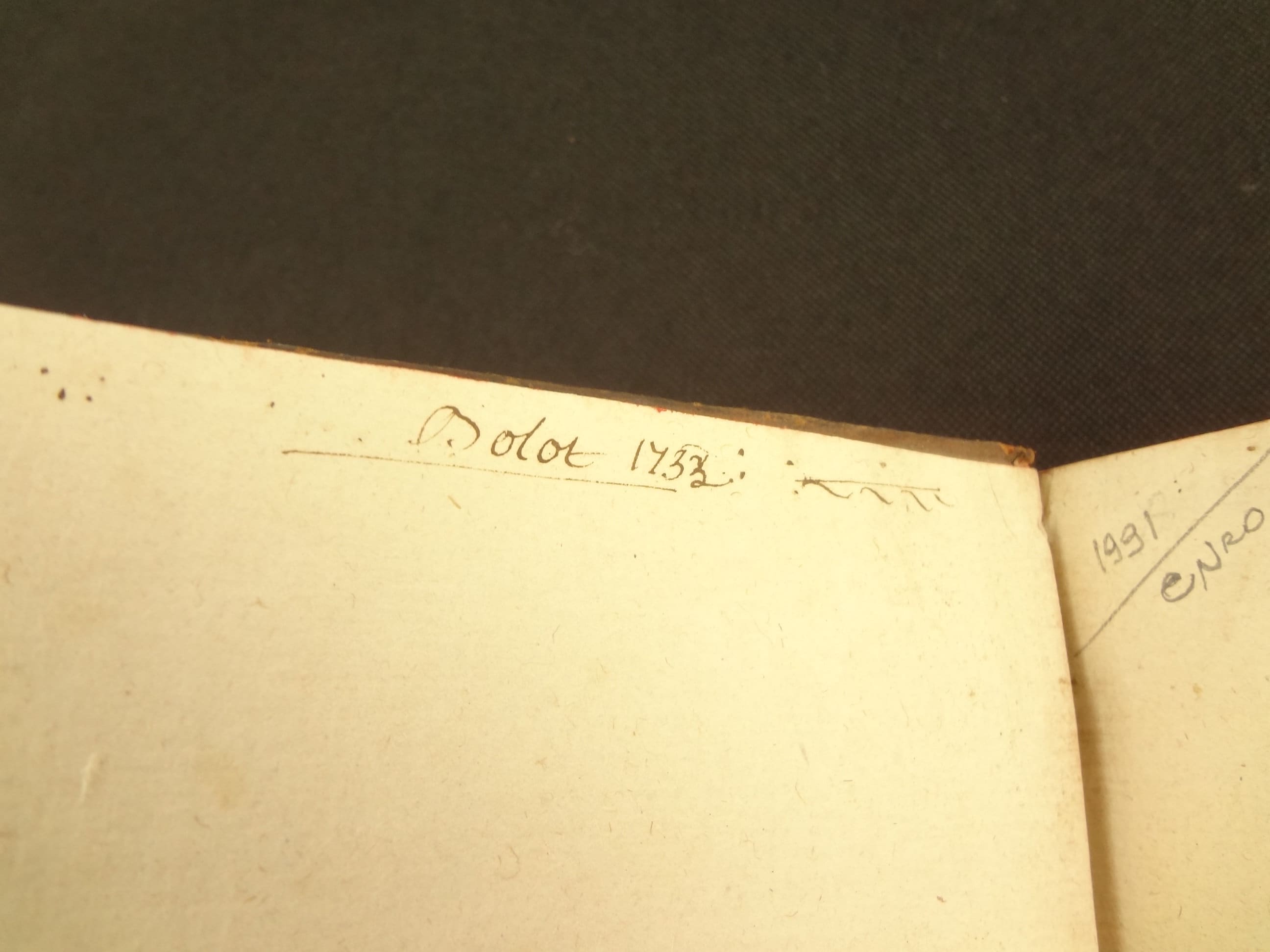 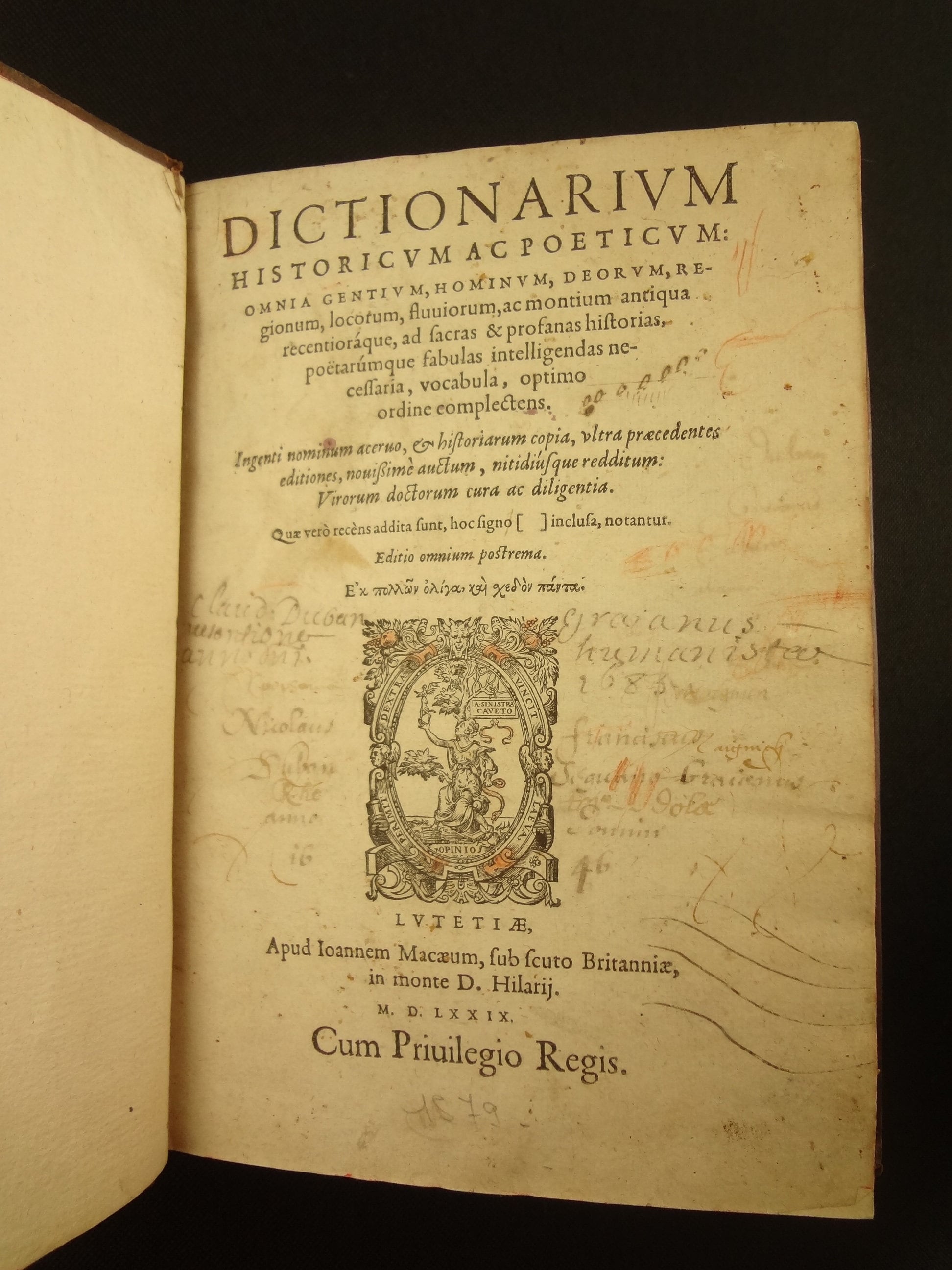 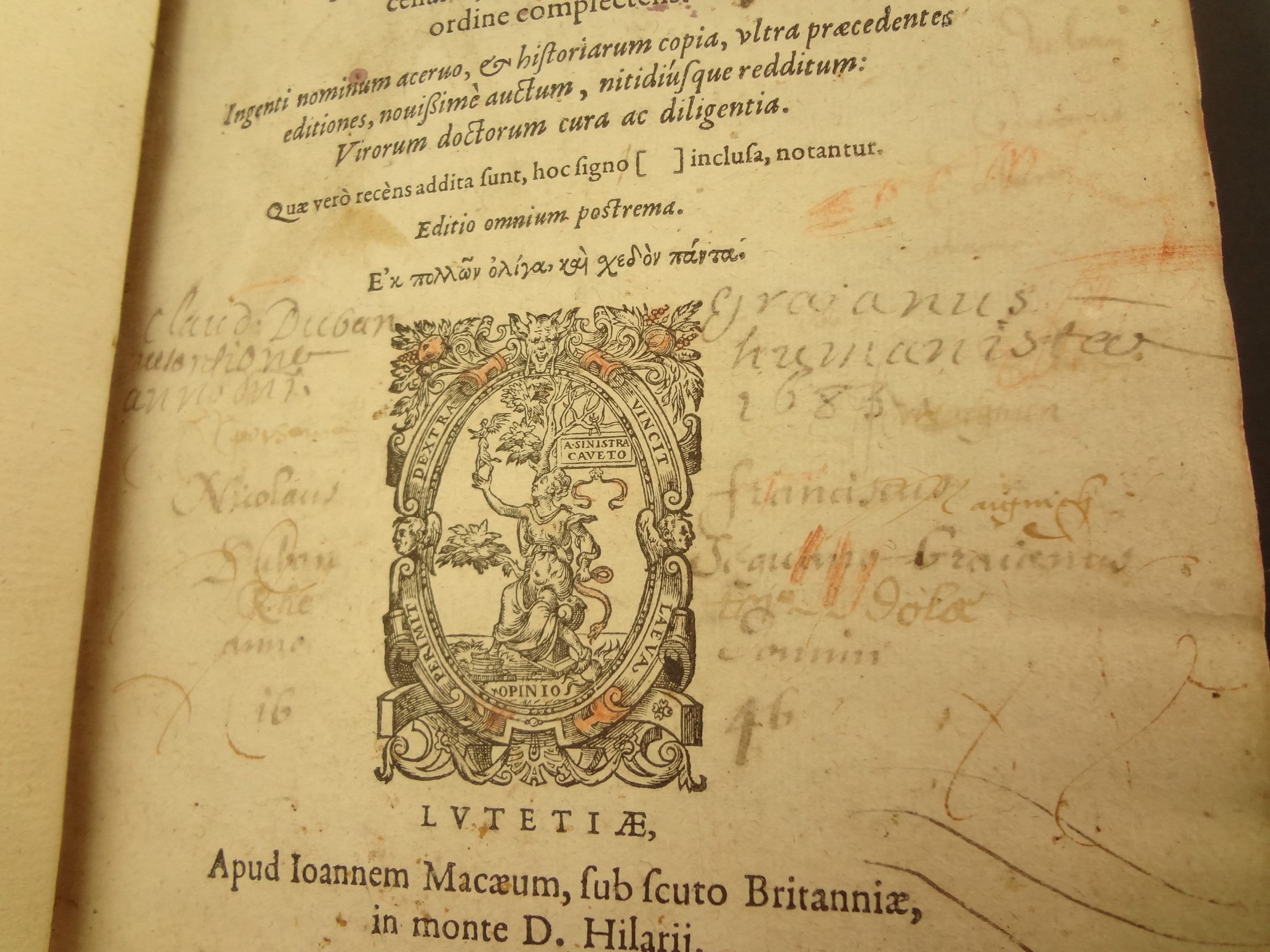 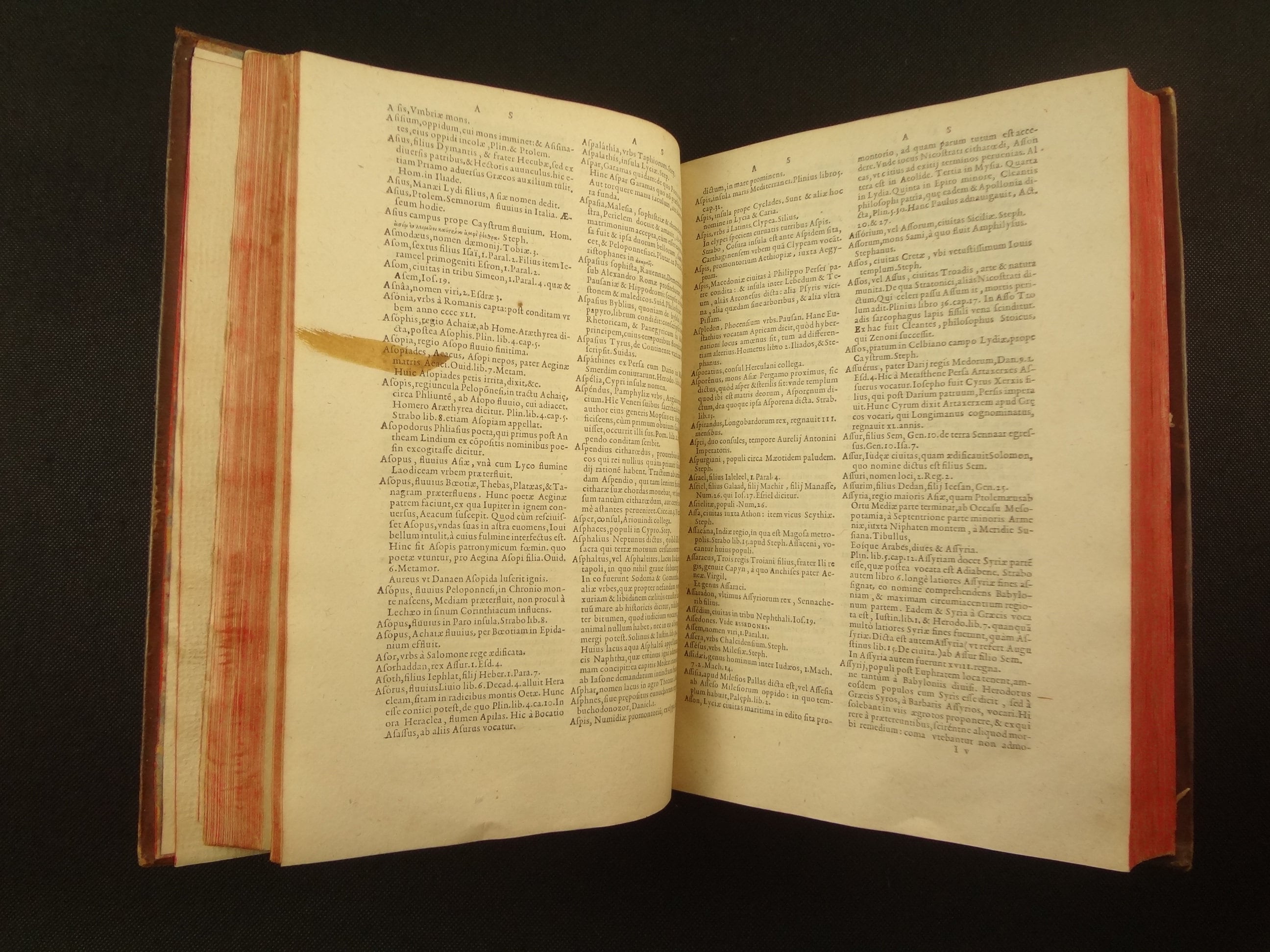 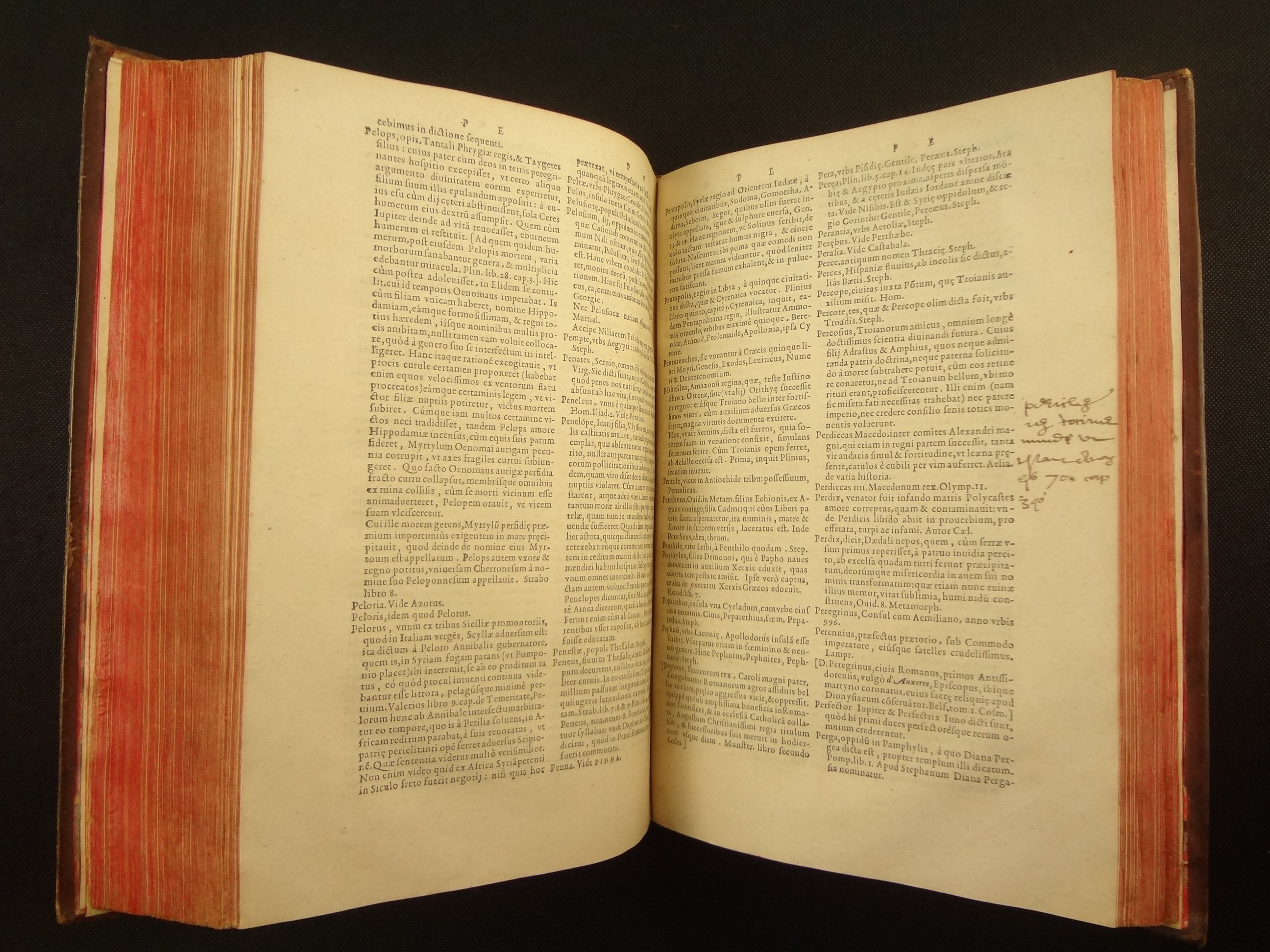 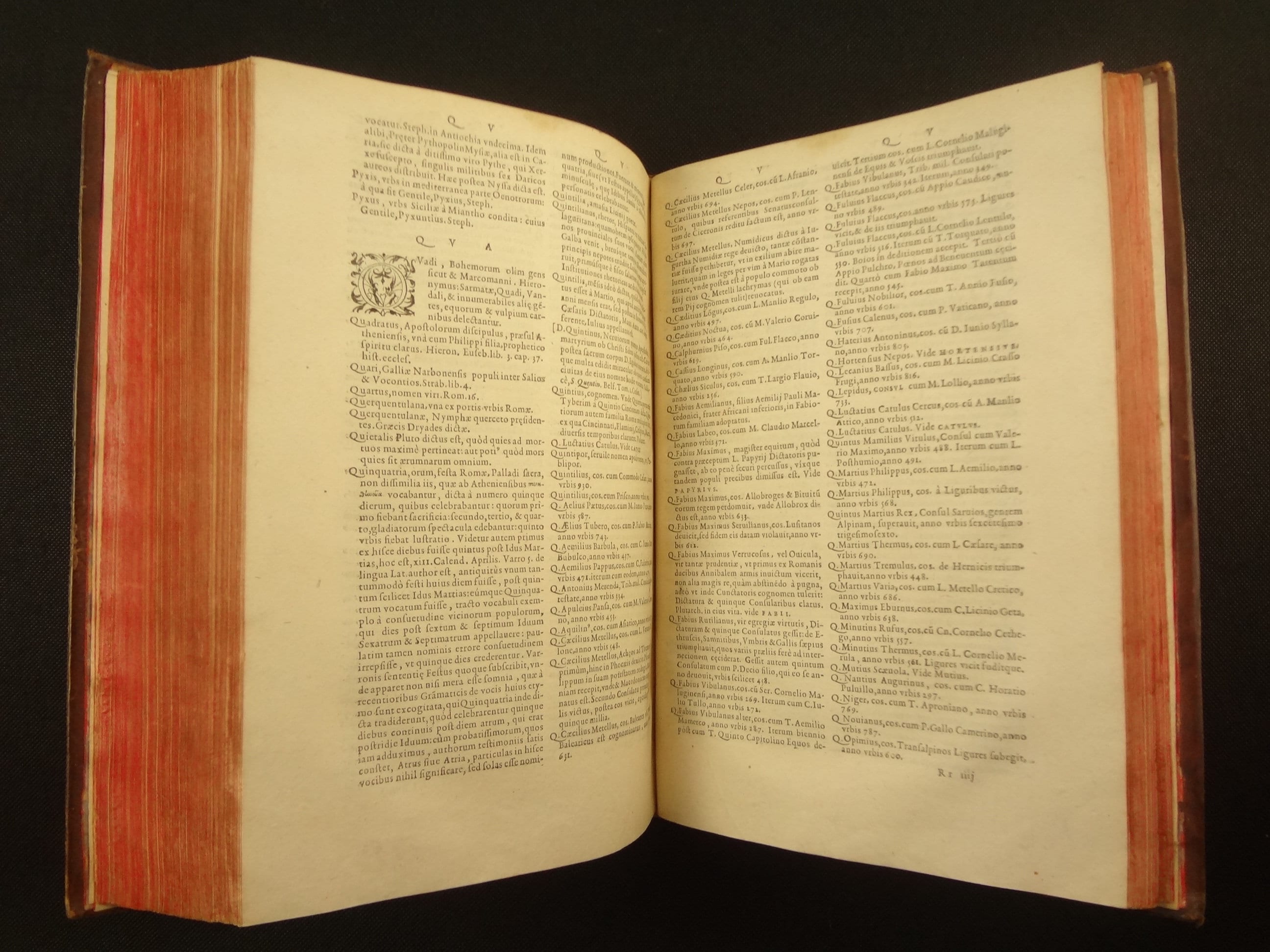 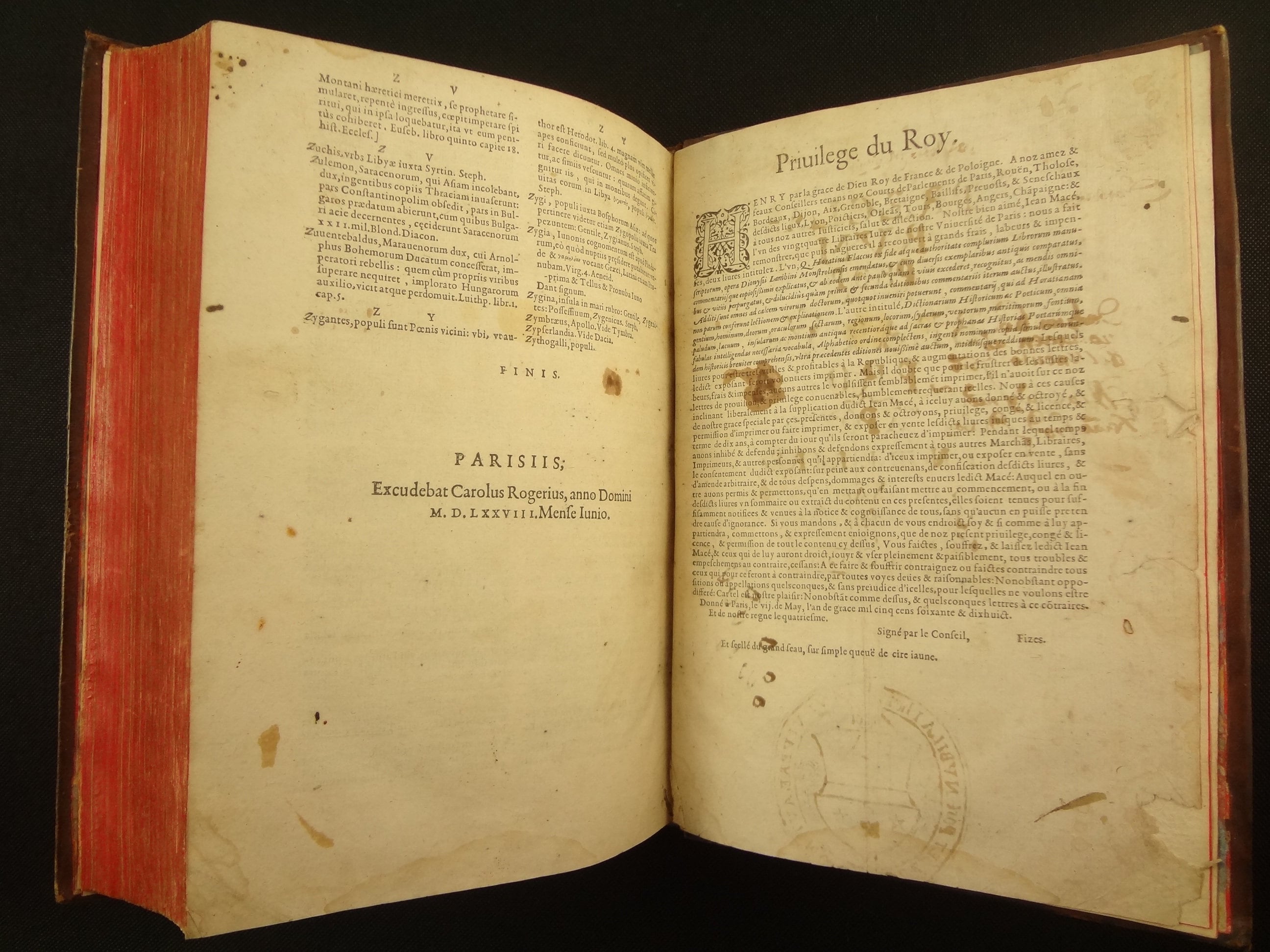 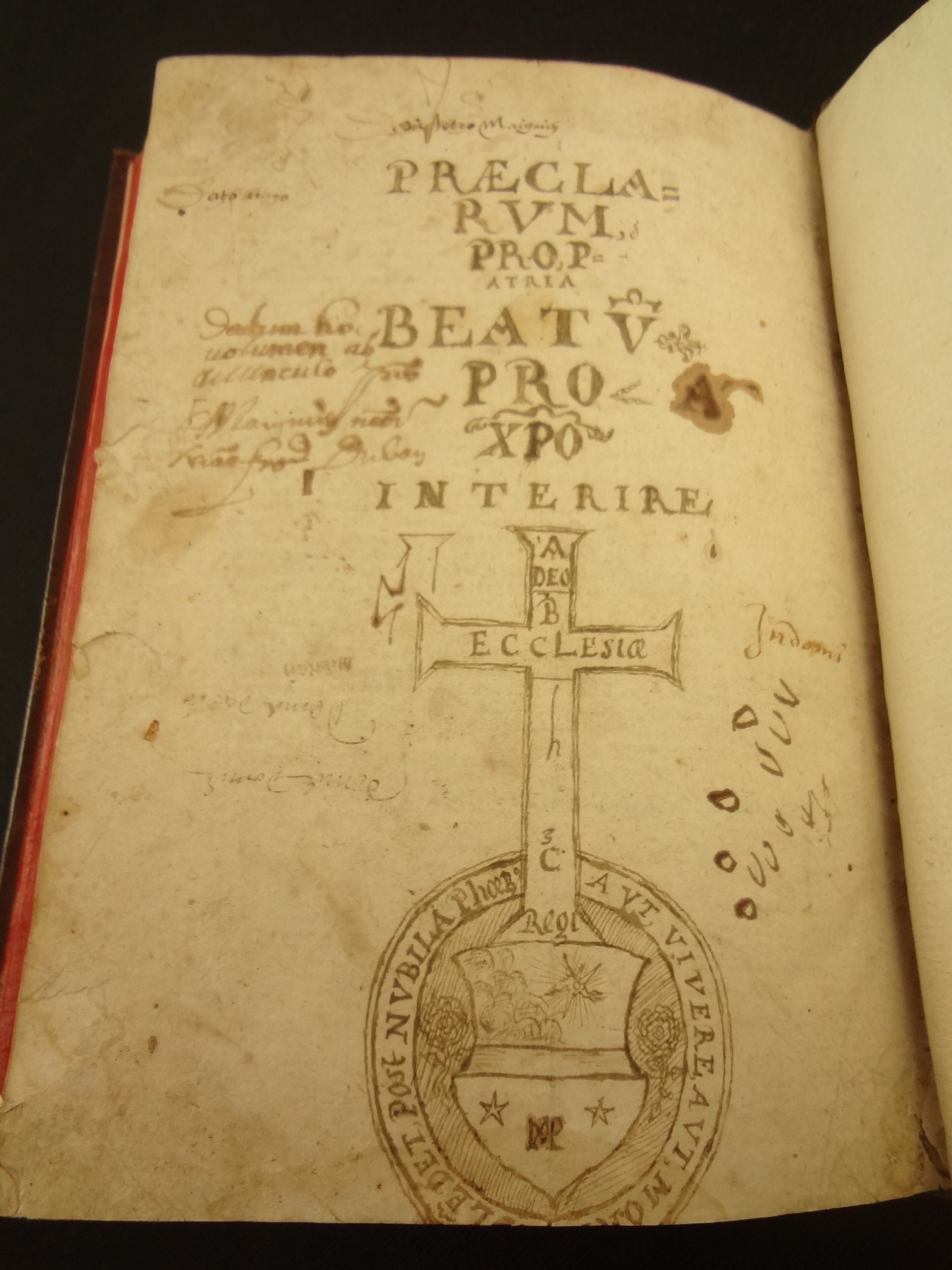 Charles Estienne's Encyclopedia, printed in Paris in 1579 by Macaeum. One of the earliest encyclopedias produced in France (some claim it is the first, but I struggle with such labels).

I've compared it to the 1553 first edition, and it is somewhat updated.

Three printers issued this work in 1579, Stoer, Gallum and Macaeum. This is certainly the rarer of the three. I find only one physical copy listed in OCLC, at the Staatsblibliothek zu Berlin, #250125713 (there is a second OCLC entry, but when you drill into it there is no hard copy associated with it, #915397066).

The drawing at the back is quite interesting. I haven't been able to find what it was drawn from. I thought it might be the watermark, drawn in over itself, but I looked back many gatherings and didn't find a matching watermark. I can clearly see, "Post nubila phoeb(us)" on the left side of the seal, and "aut, vivere, aut (presumably "mori")" on the other side, but exact word searches for those two phrases used together bring up nothing... zero results. Likewise with other exact word searches based on the (crest?).

Charles Estienne, born in 1504 in Paris and died in 1564,was a French physician, printer and writer. He is also known by the Latin name of Carolus Stephanus. He belongs to the large family of printers of the same name (third son of Henri Estienne),and was the son-in-law of Simon de Colines. He was brought up with a knowledge of belles-lettres and ancient languages. He worked a little in the studio and then studied medicine in Paris with Jacobus Sylvius at the same time as Vesalius. Before becoming a printer himself, he had devoted himself to ancient languages and then to medicine, like Rabelais.

Two centuries of previous owners is documented by ex-libris marks and one impressive illustration. In 1733 a "Bolot" signed two front endpapers. In 1646 Nicolaus Duban signed the title page, and in 1683 Claud Duban. Also, a Duban wrote, "Duban" (just to the left of the "XPO" on the rear page, also allegedly producing the drawing.

Measures approx. 25 x 17.5 x 4.5 cm. Calf binding in the 18th century style. Spine with five raised bands; five compartments richly tooled in gilt with a central motif of flowers extending from a vase, surrounded by stars and vines with leaves, one compartment with the title in gilt on tan morocco. Edges of the boards rolled in a gilt design. Marbled endpapers. Printer's mark on title page.

See pictures. (c) 18th c. binding. Chipping at top and bottom of spine. 1.5" crack at top of front joint, some rubbing to boards. A little dust on top-edge, silk ribbon expired. Will not stand by itself.

This book is holding together well, but was certainly used as an encyclopedia in history.