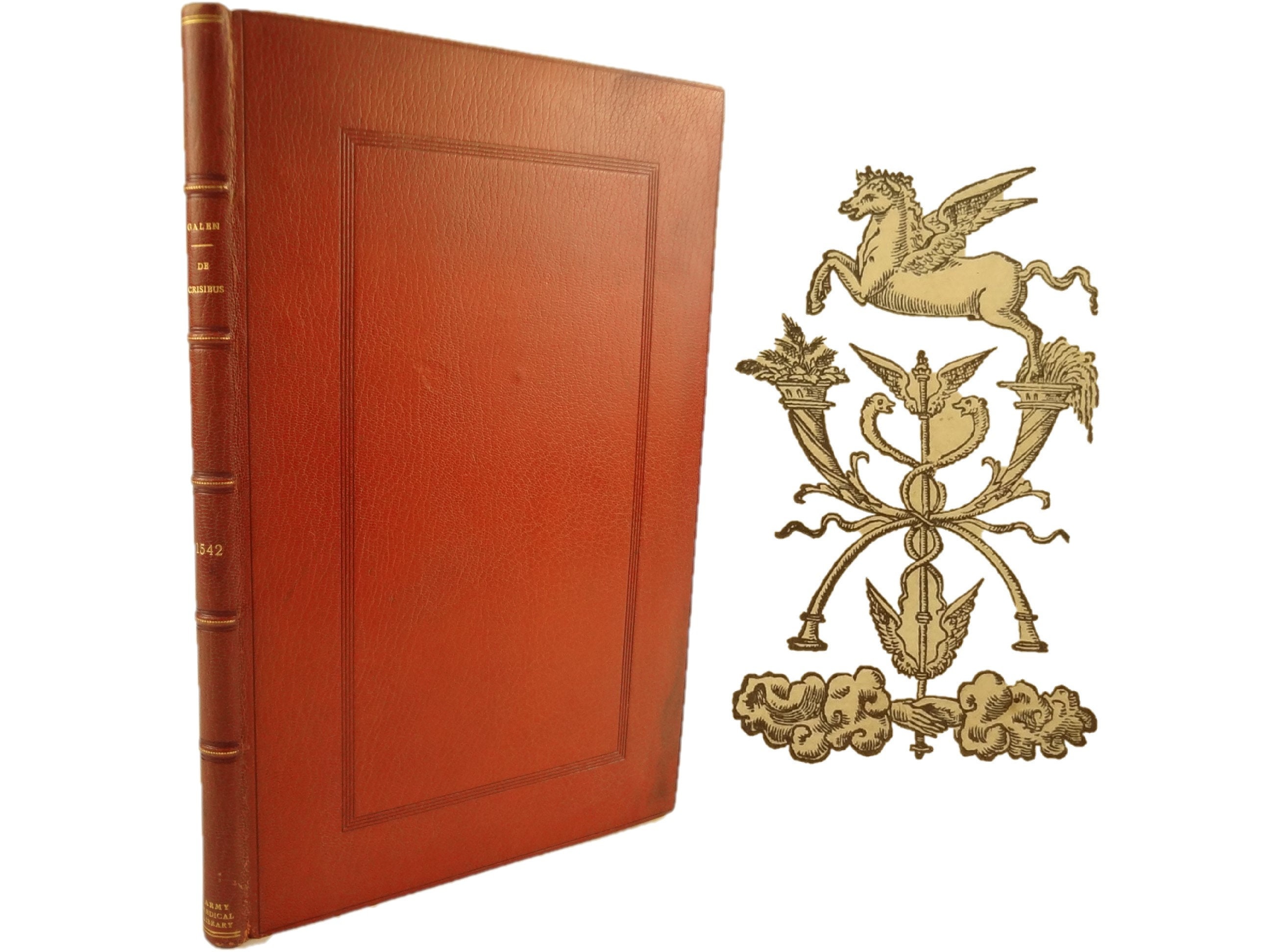 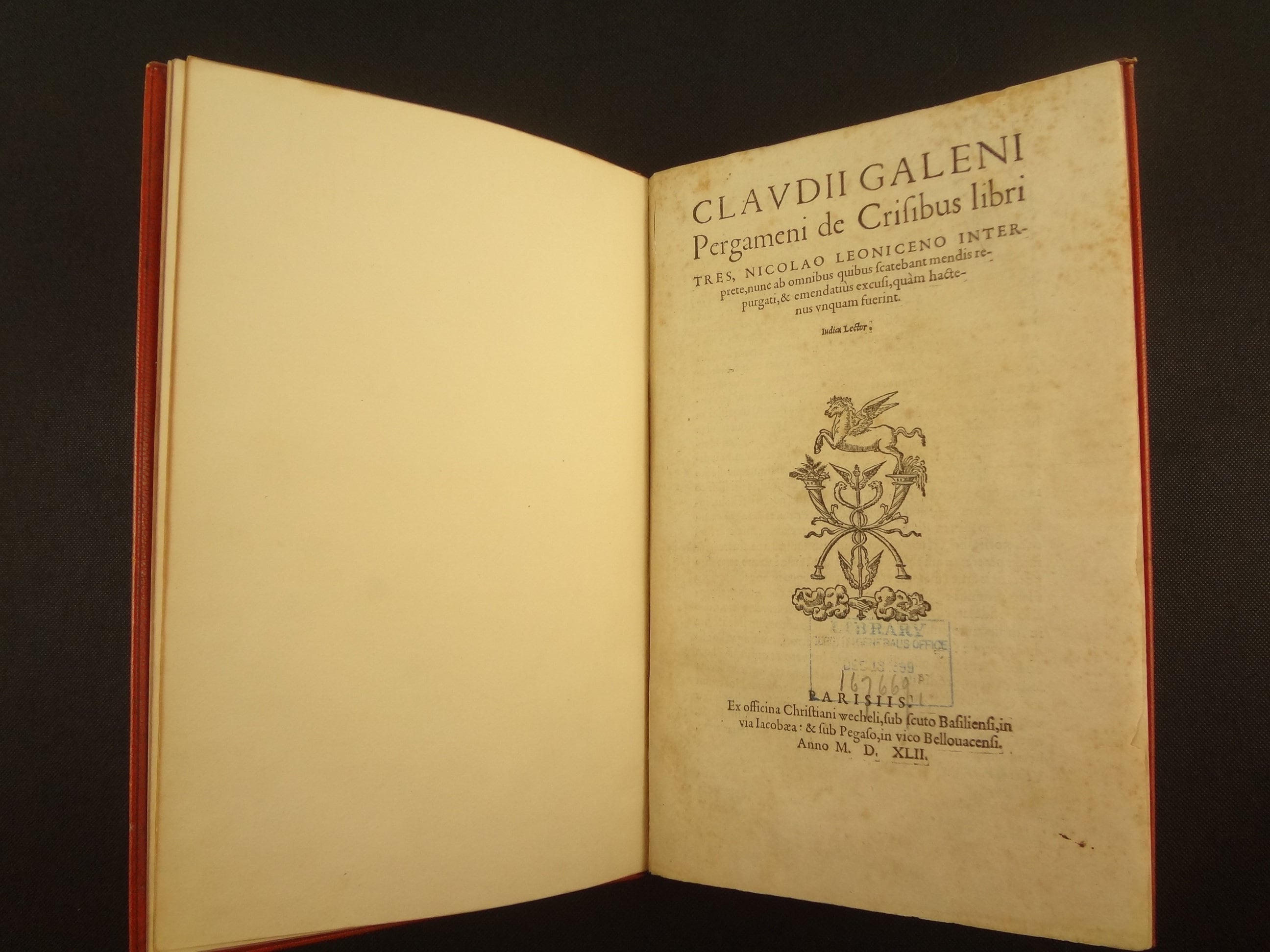 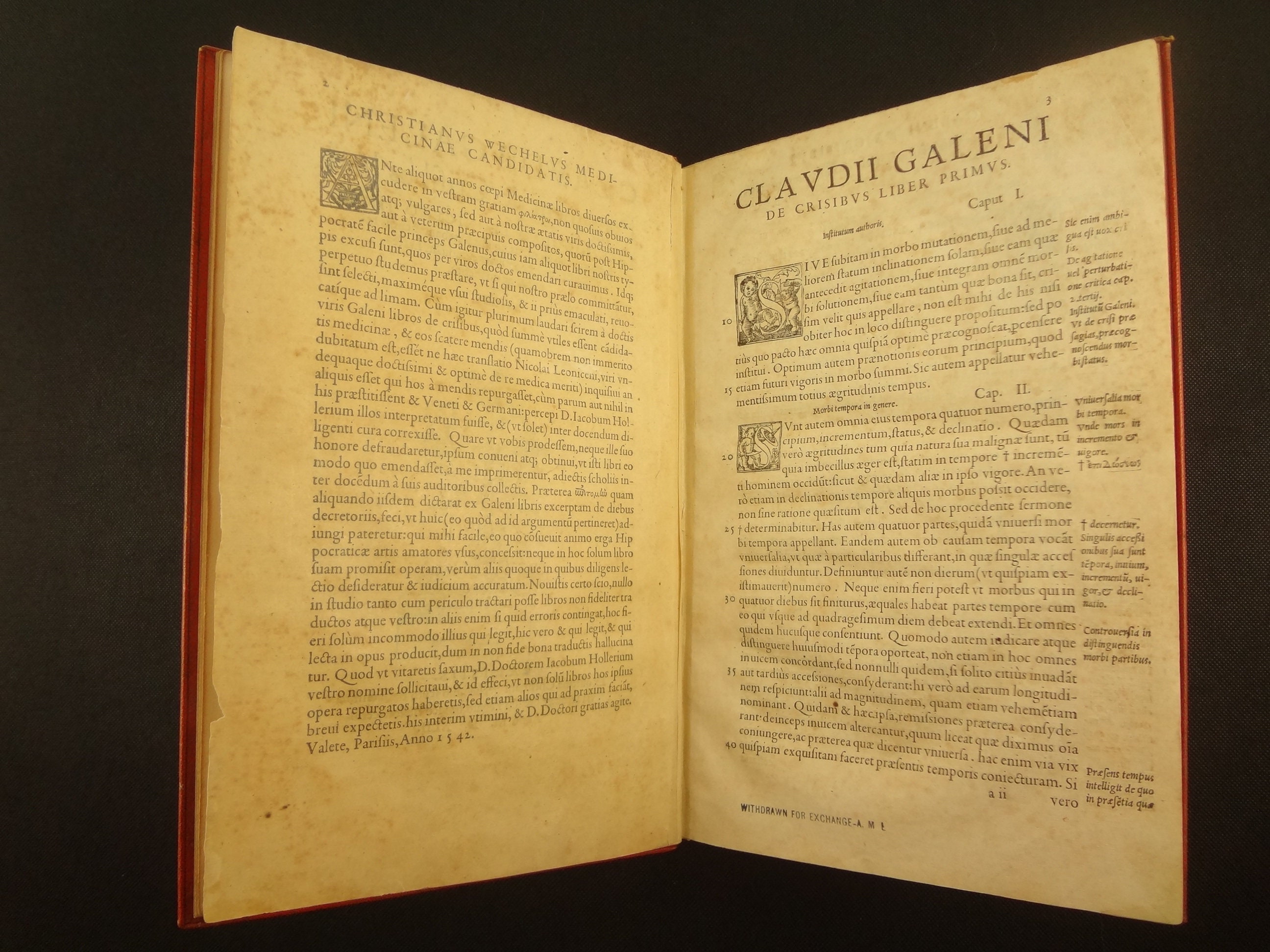 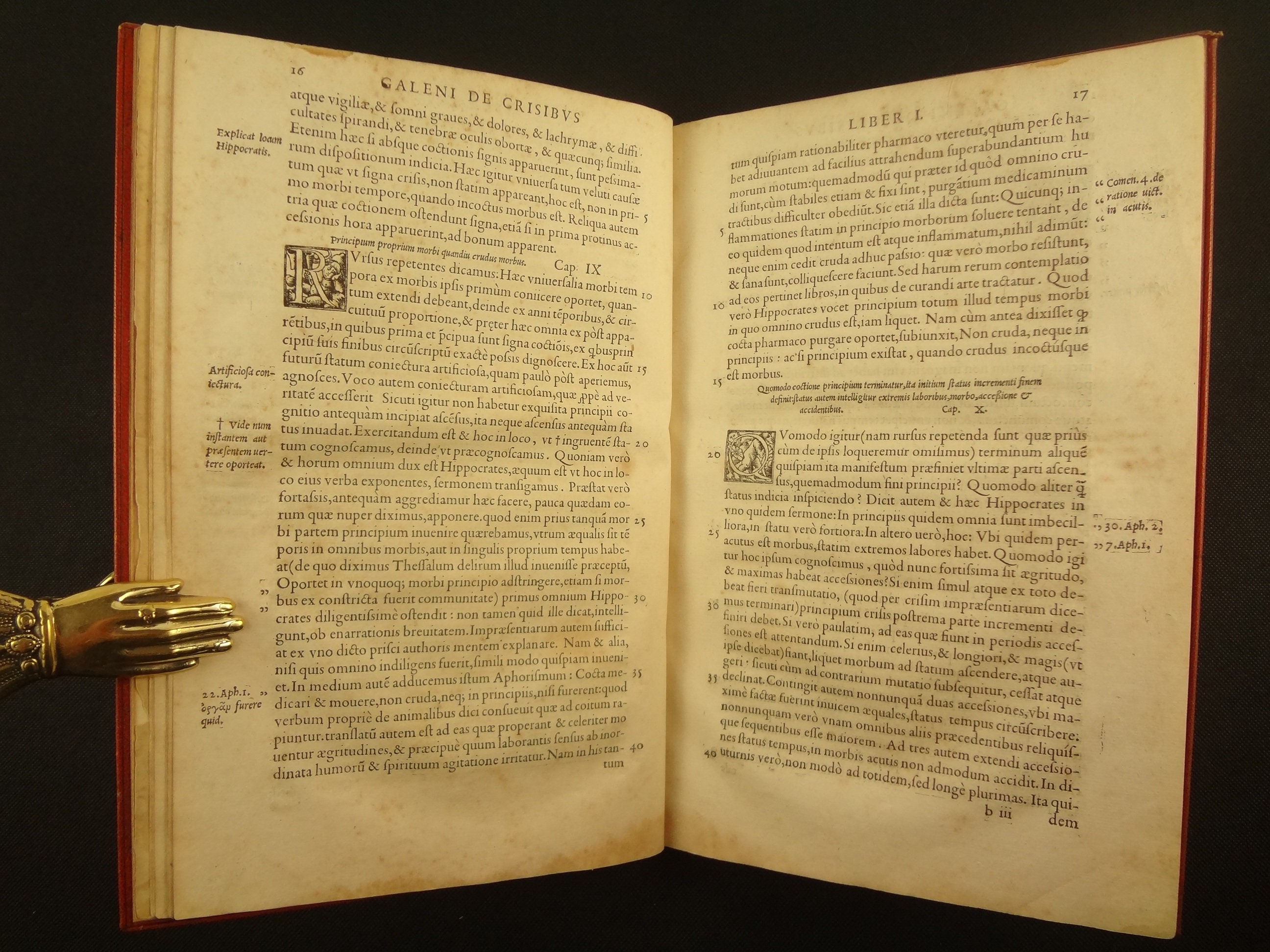 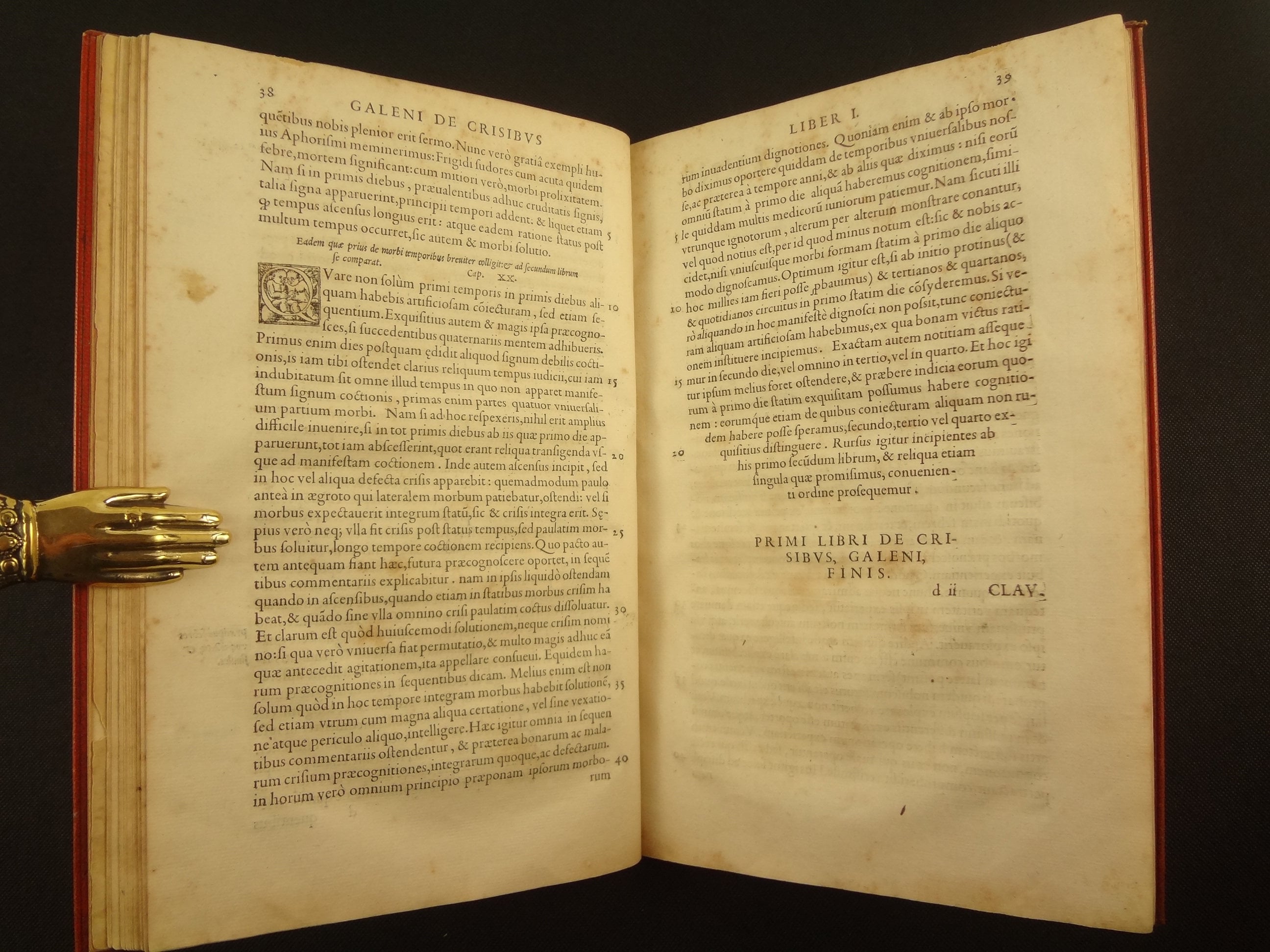 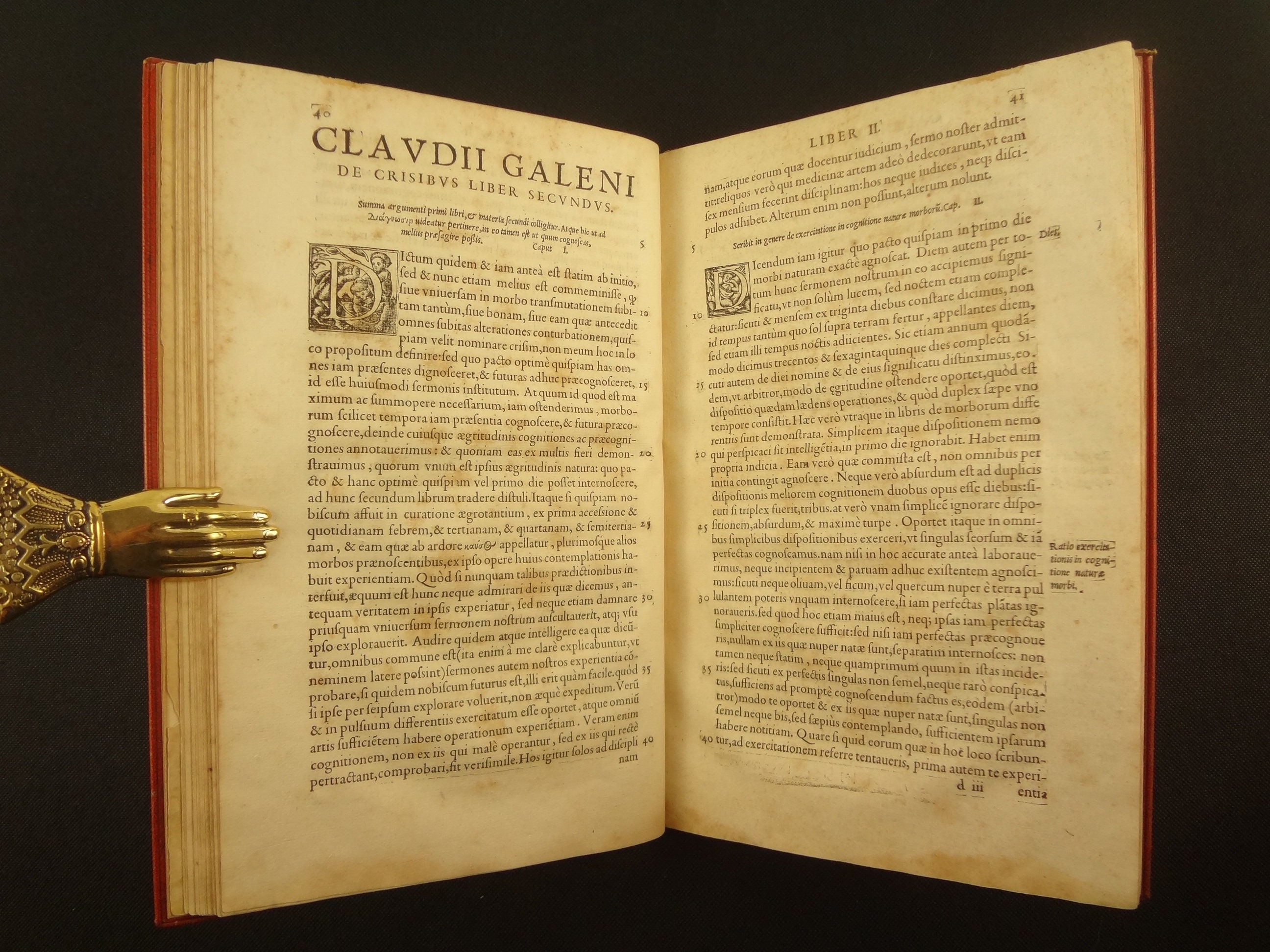 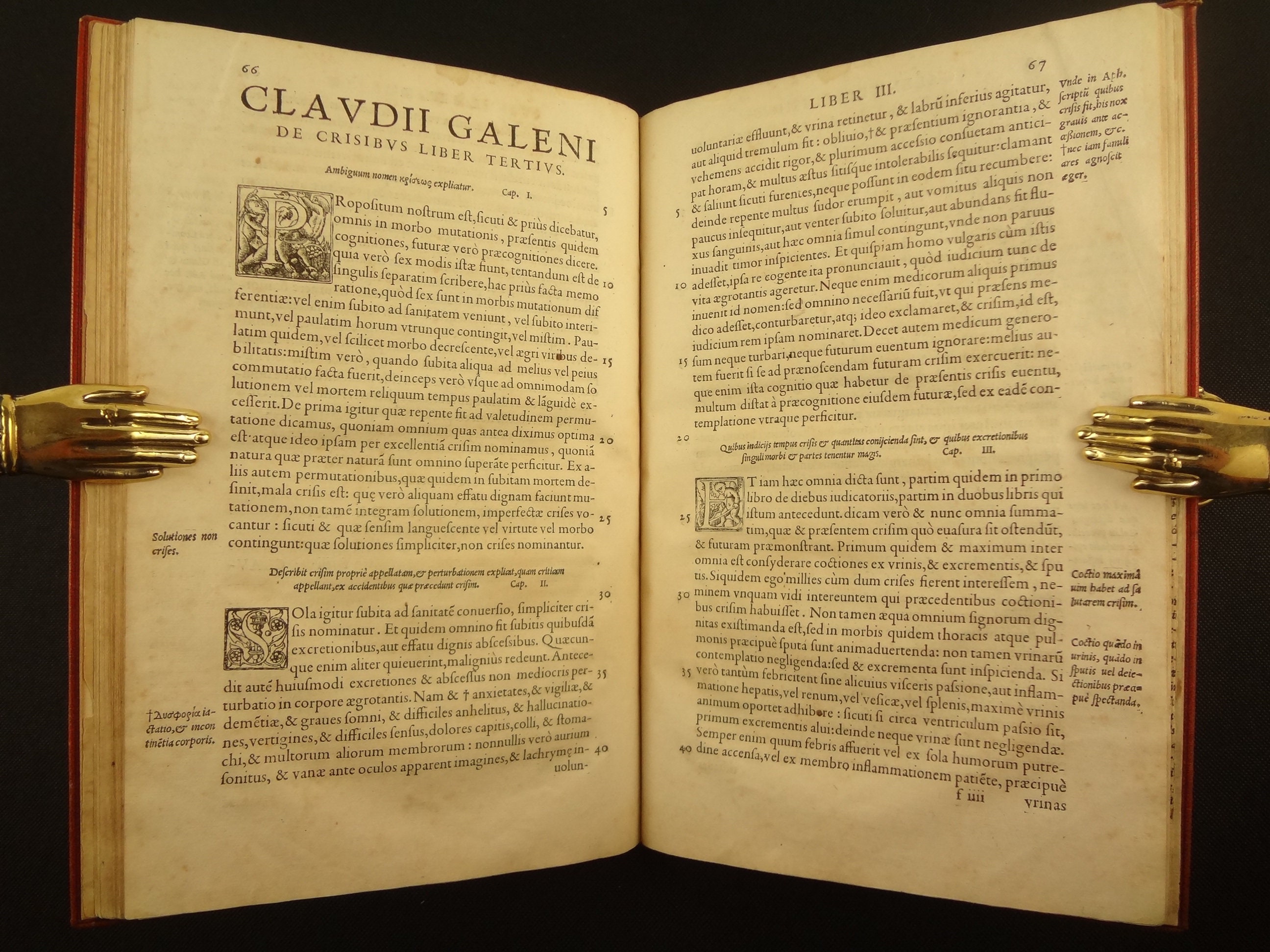 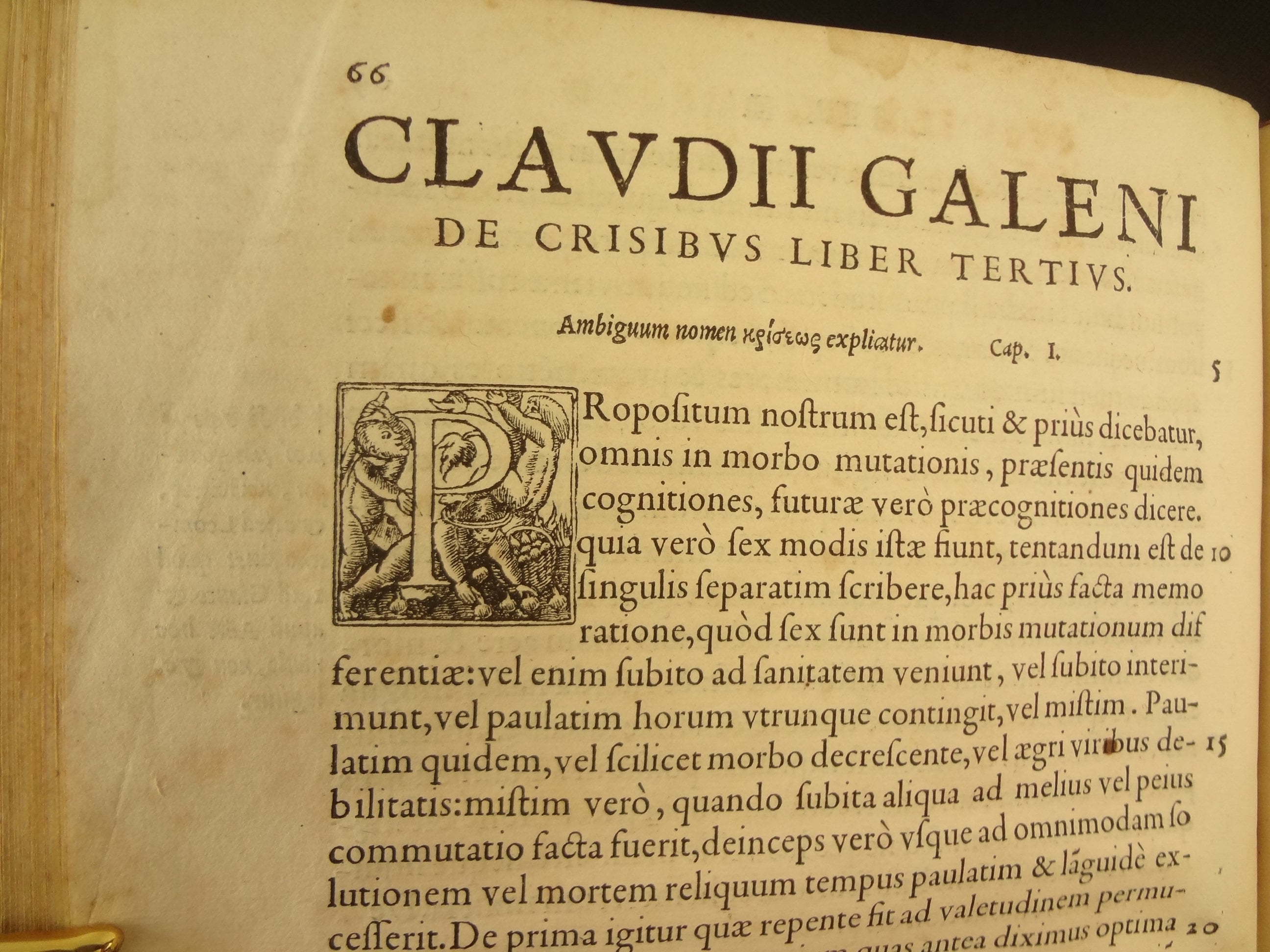 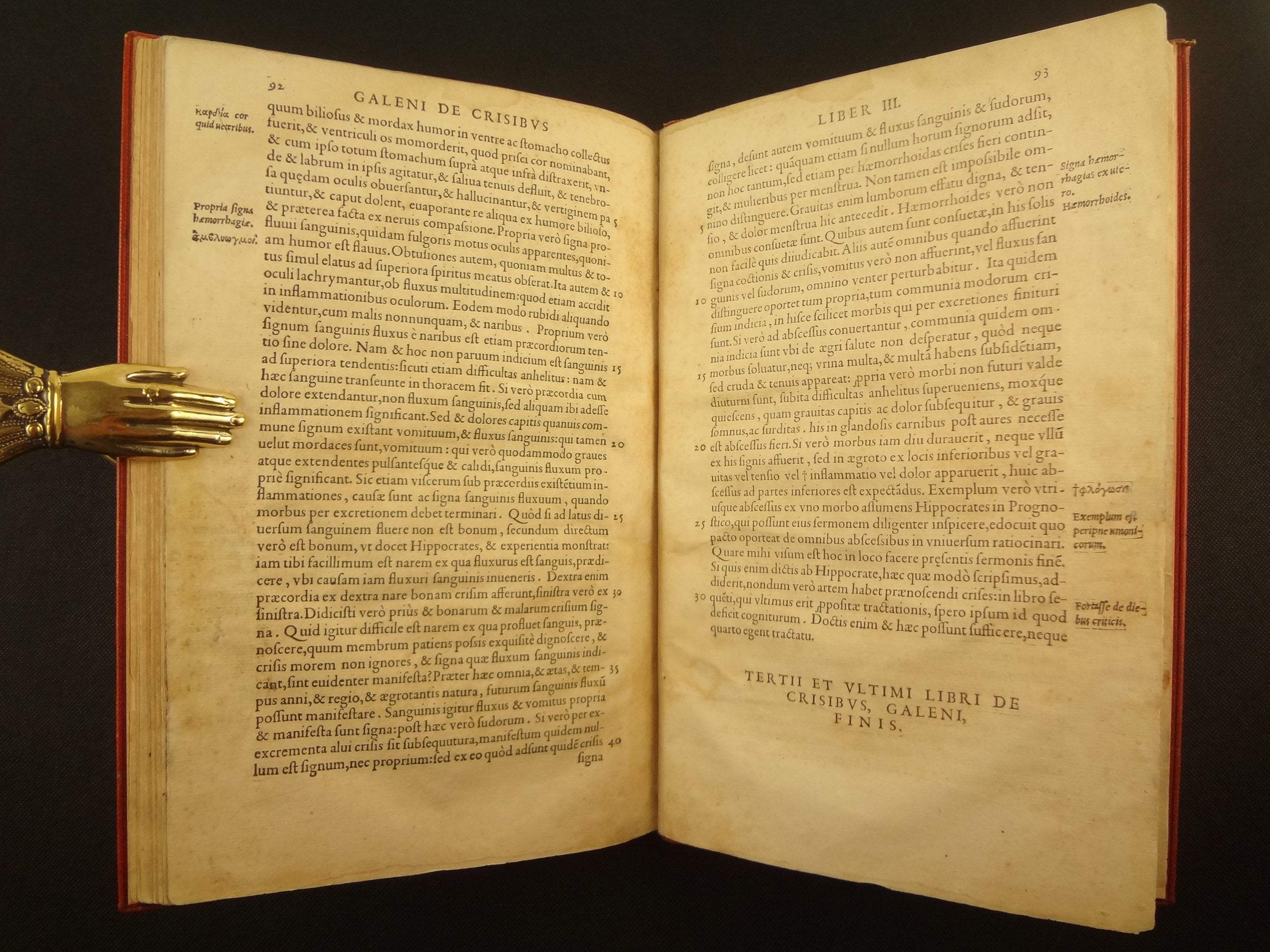 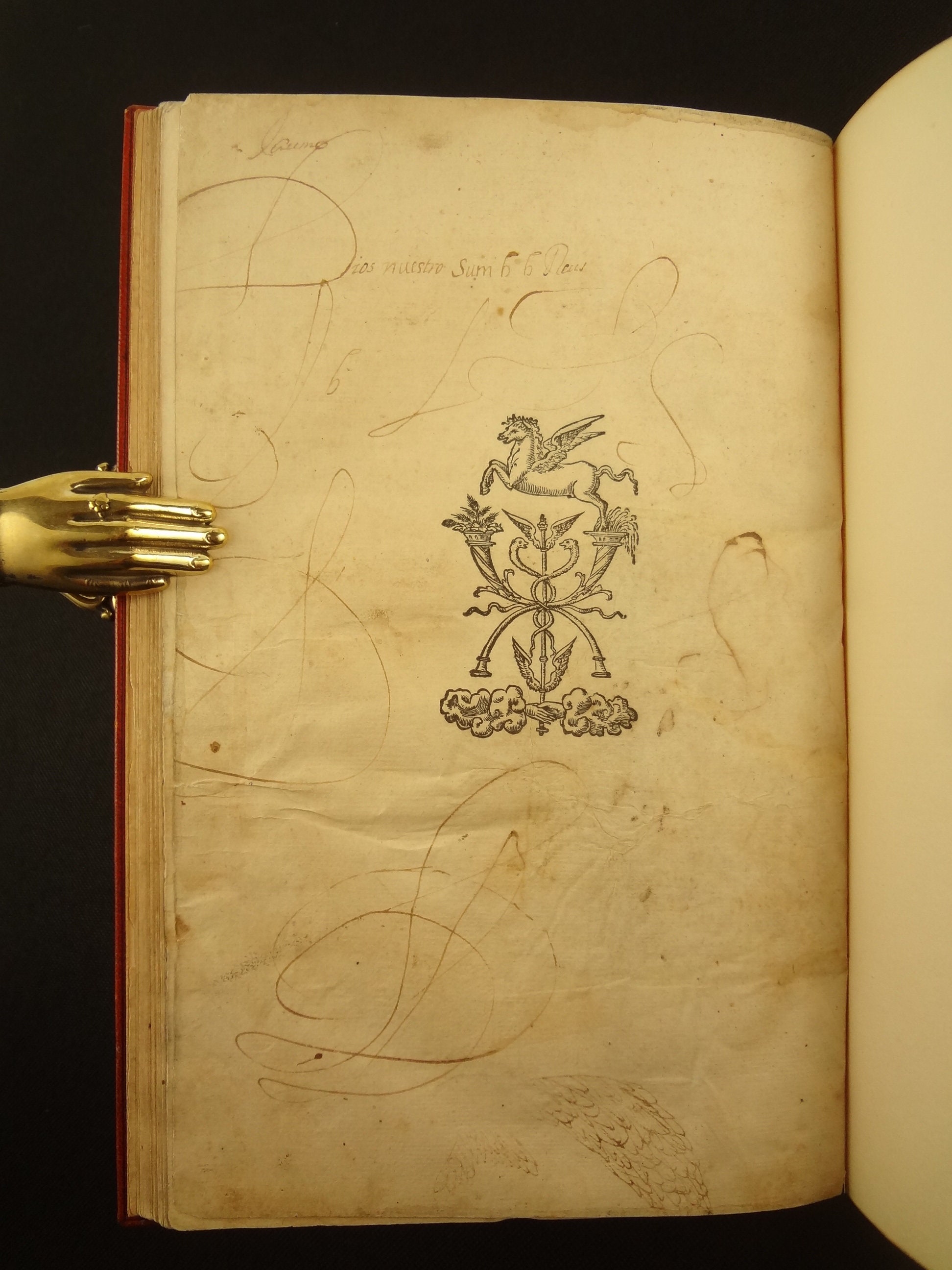 1542 edition of Galen's De Crisibus, complete in "three books", printed by the Parisian printer Wechel (at the sign of the Pegasus) as Claudii Galeni Pergameni De Crisibus libri Tres.

Niccolo Leoniceno edits this edition, from Arabic sources, of Galen's treatise on astral influences on the critical points on an illness, called 'De criticis diebus' or 'De diebus decretoriis' ("crisis").

Galen's understanding of anatomy and medicine was principally influenced by the then-current theory of the four humors: black bile, yellow bile, blood, and phlegm, as first advanced by the author of On the Nature of Man in the Hippocratic corpus. Galen's views dominated and influenced Western medical science for more than 1,300 years. His anatomical reports were based mainly on the dissection of Barbary apes. However, when he discovered that their facial expressions were too much like those of humans, he switched to other animals, such as pigs. The reason for using animals to discover the human body was due to the fact that dissections and vivisections on humans were strictly prohibited at the time. Galen would encourage his students to go look at dead gladiators or bodies that washed up in order to get better acquainted with the human body. His anatomical reports remained uncontested until 1543, when printed descriptions and illustrations of human dissections were published in the seminal work De humani corporis fabrica by Andreas Vesalius, where Galen's physiological theory was accommodated to these new observations.

Niccolò Leoniceno (1428–1524) was an Italian physician and humanist. He was a pioneer in the translation of ancient Greek and Arabic medical texts by such authors as Galen and Hippocrates into Latin. Leoniceno began his career in what has been referred to as the age of the manuscript. At this point in time knowledge was acquired primarily through the examination of existing texts. Leoniceno’s library was most impressive, and its contents reflected the textual approach to scholarship popular at the time. An inventory taken after his death revealed 345 volumes comprising 482 individual works.

Book printer, originally from Germany but set up his business in Paris. Founder of a printing dynasty, succeeded by his son Andrew who fled France after the massacre of St. Bartholomew's Day. Christian himself had run into trouble when he published Erasmus' 'De eso interdicto carnium' (1534).

1899 stamp of the "Surgeon General's Office", and a ticket at the rear "Army Medical Library". Stamp on page 3 reads, "Withdrawn for exchange - A. M. L.. Loose advertisement from James Tait Goodrich, doctor and antiquarian bookseller ($1000).

OCLC lists only one copy of this printing in the world's libraries, at Yale University Library (OCLC 83684264). This is listed in Durling's Medical Library catalogue as number 1868.

Measures approx. 29 x 19 x 1 cm, signed in 6 (but likely a large quarto). Light brown morocco binding; board with a single blind fillet outside border, and inner frame of four blind fillets. Spine with five raised bands; title in gilt in one compartment, year in gilt in one compartment, and Army Medical Library in gilt at bottom of spine. Renewed endpapers. Printer's mark at title page and last leaf. Some inhabited initials.