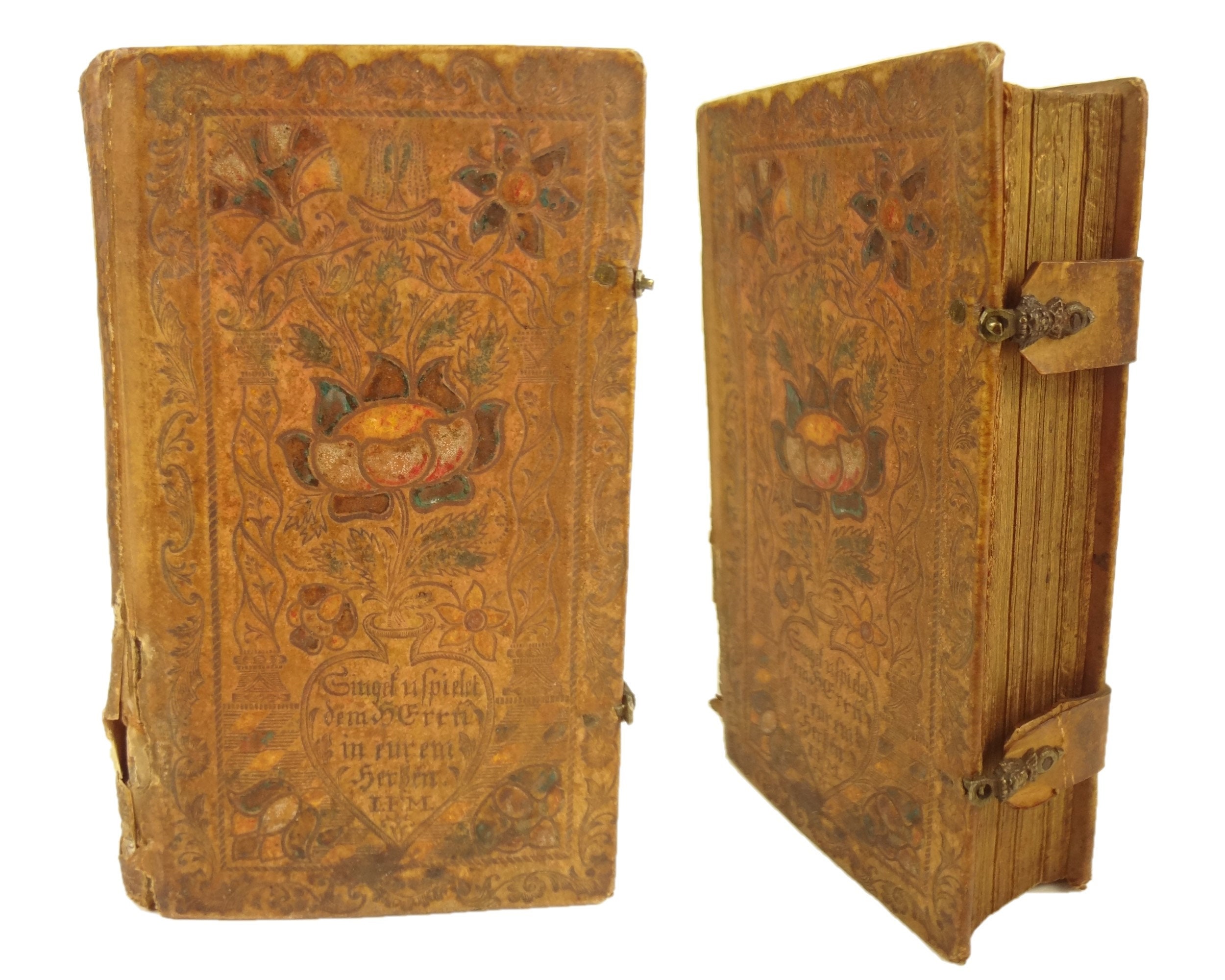 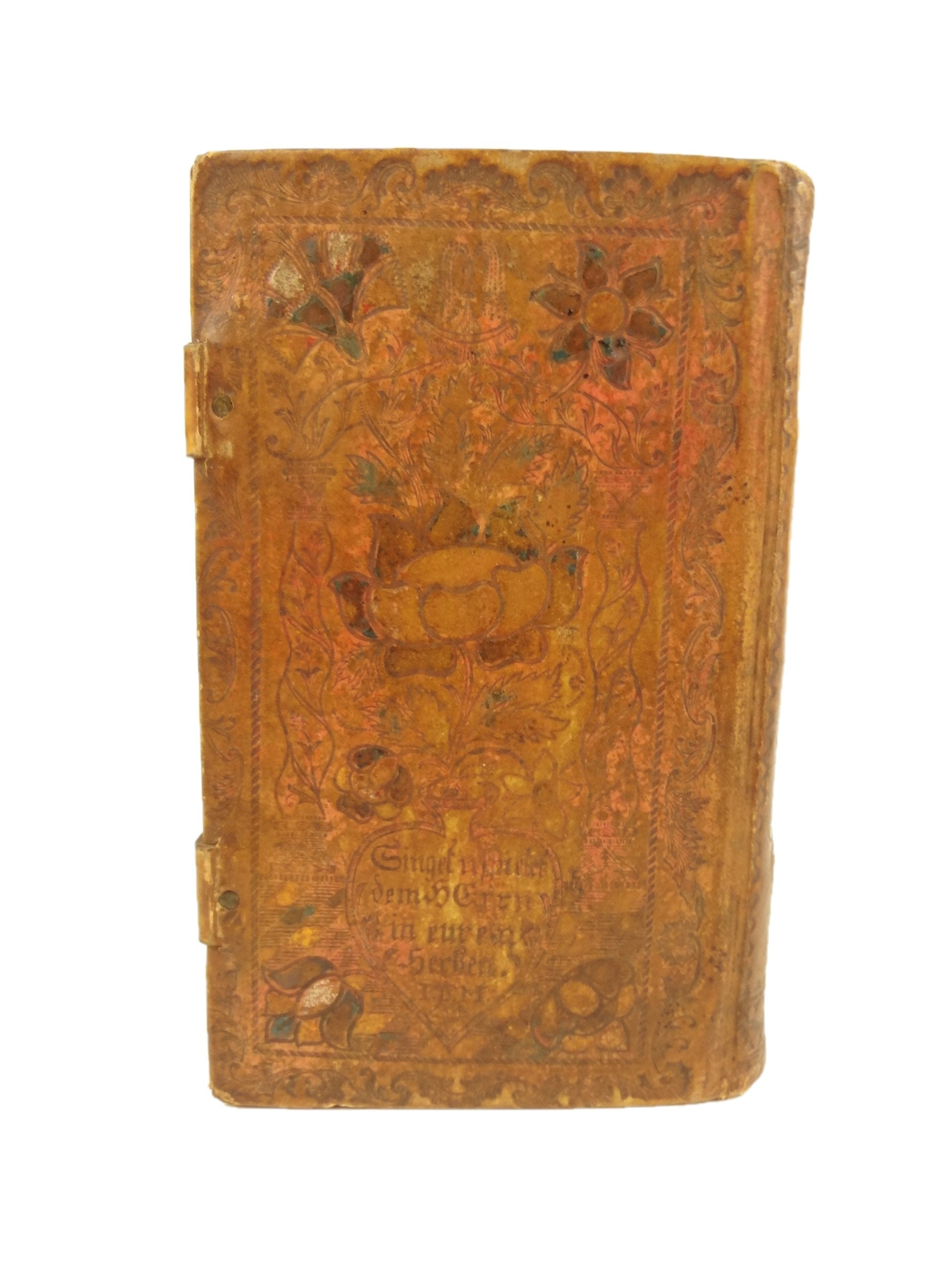 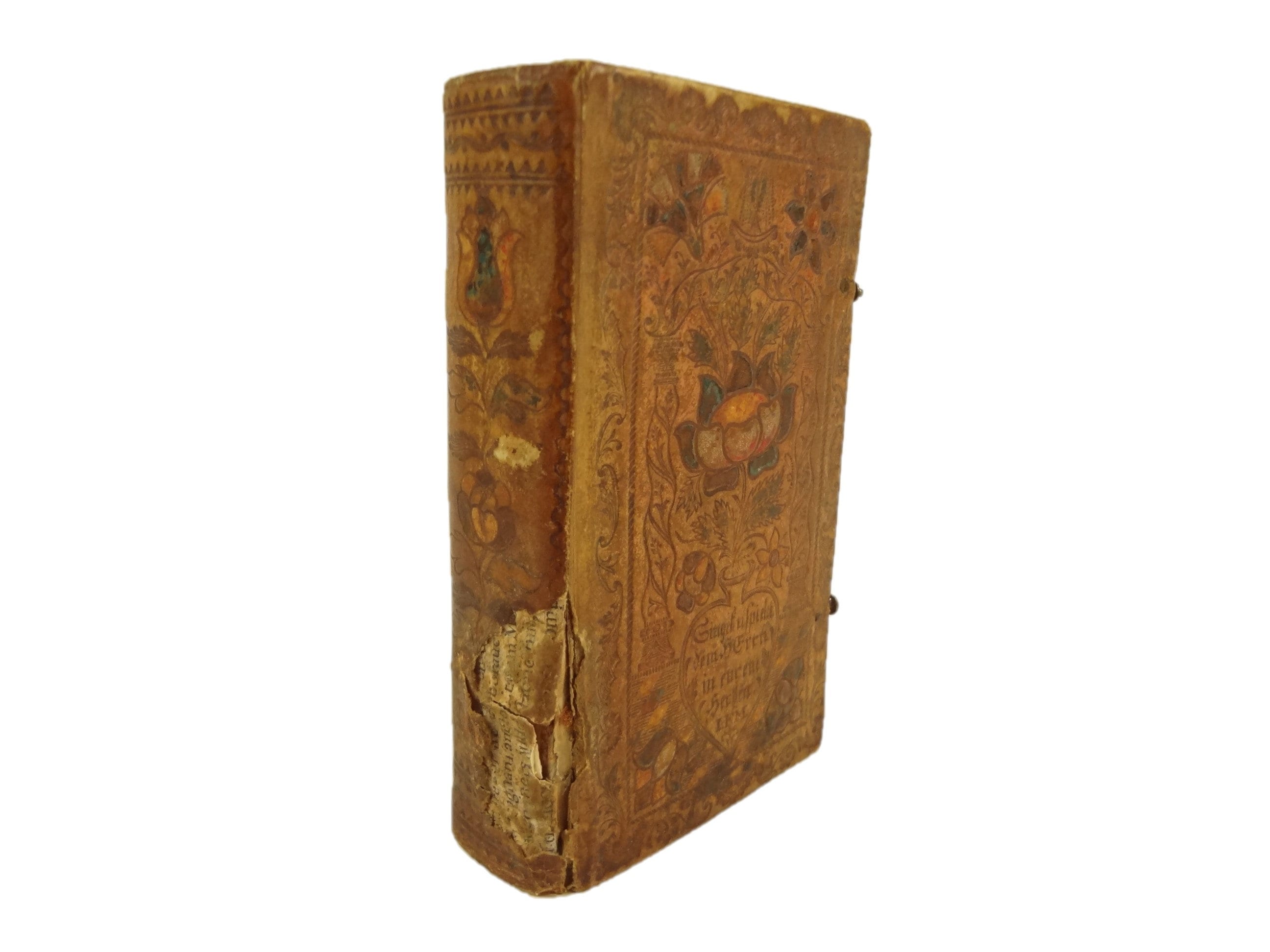 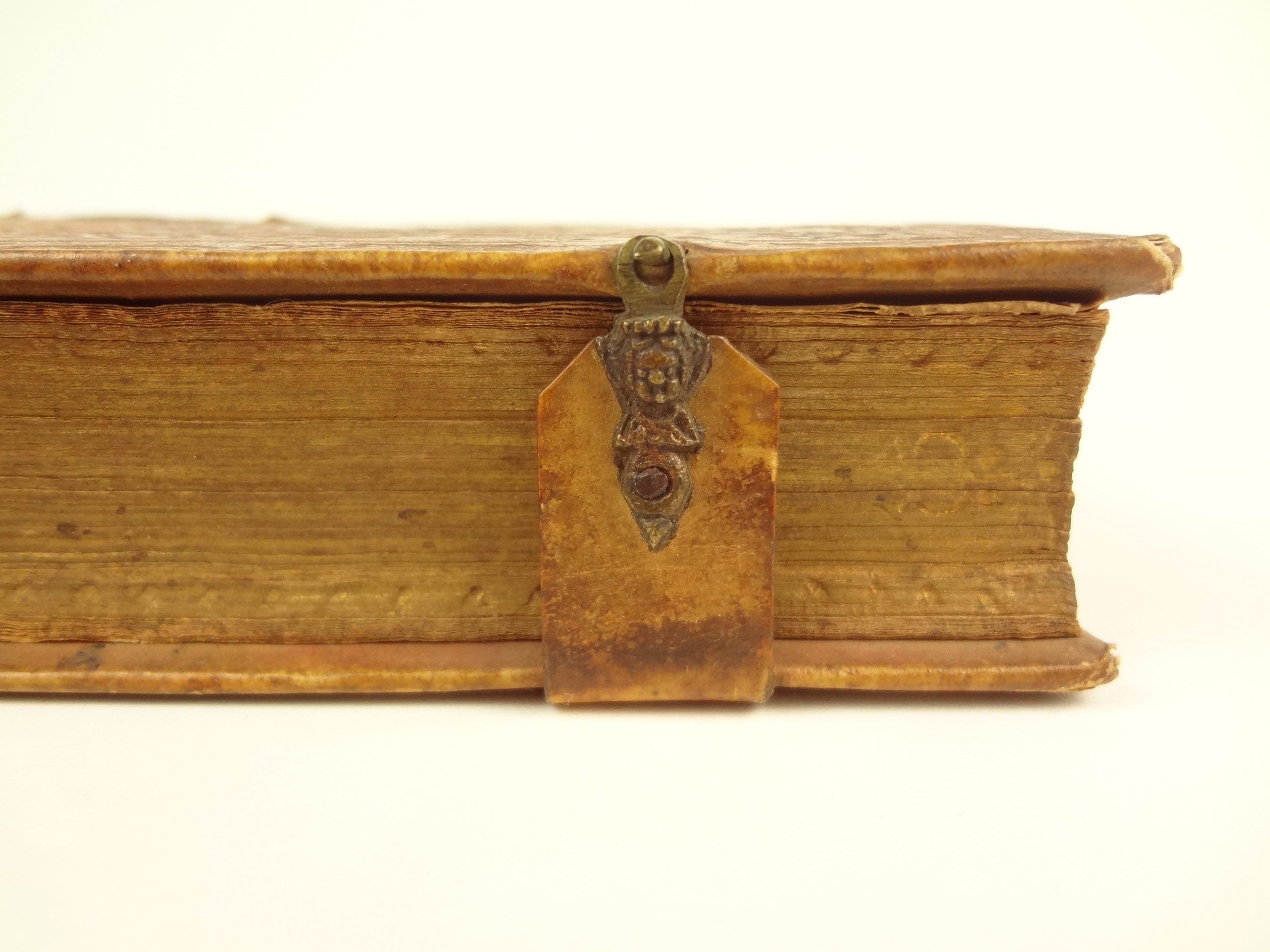 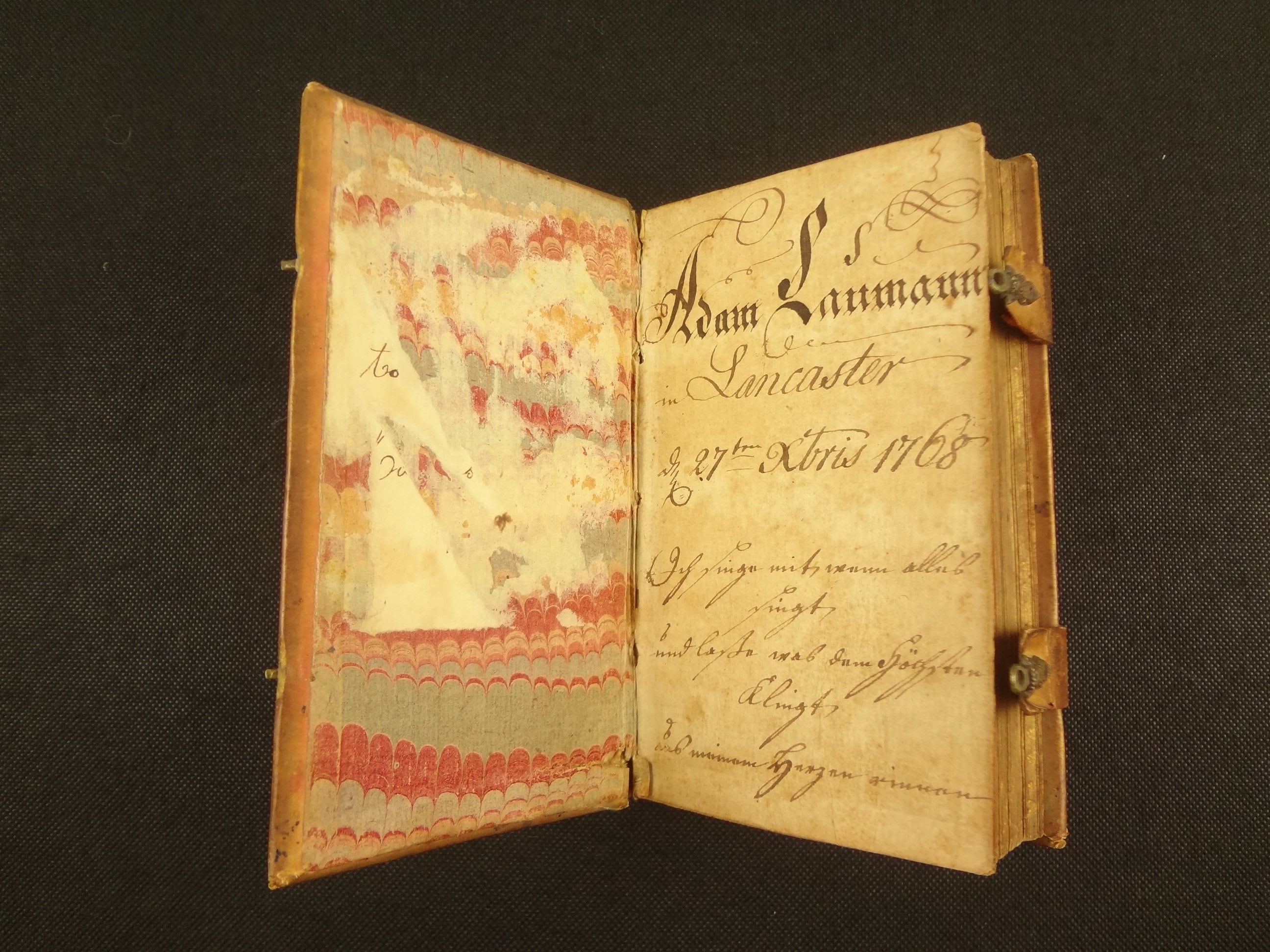 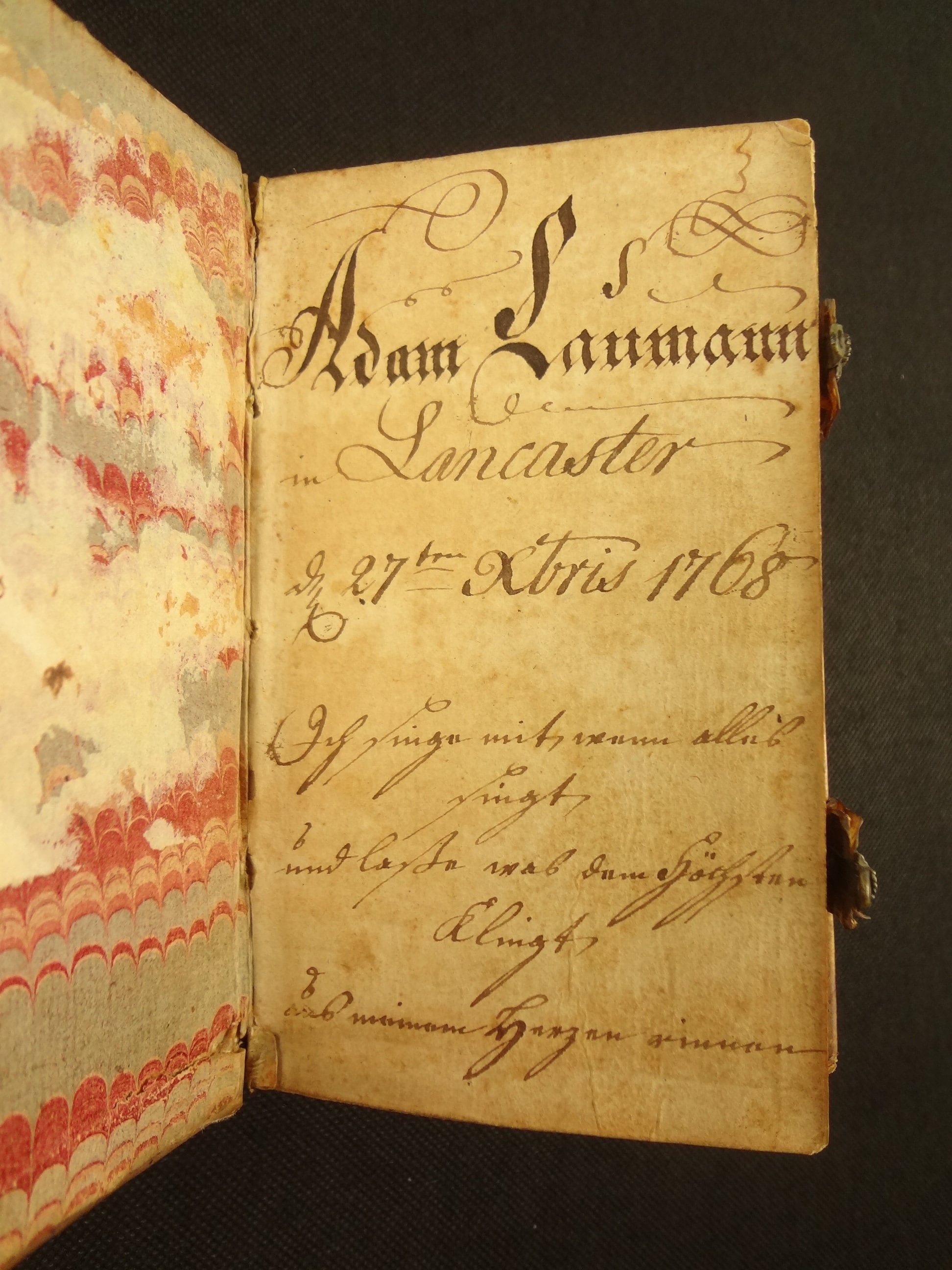 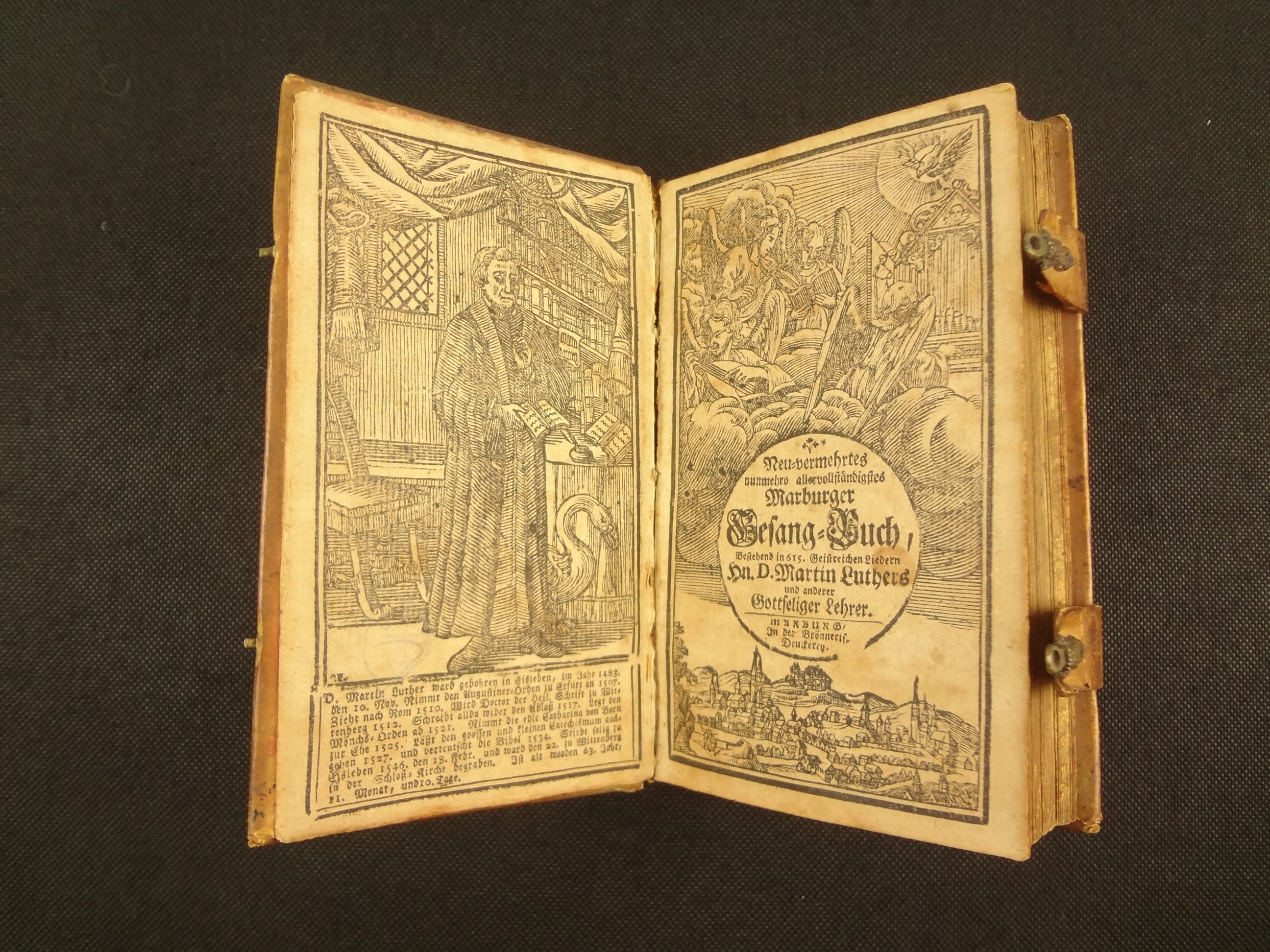 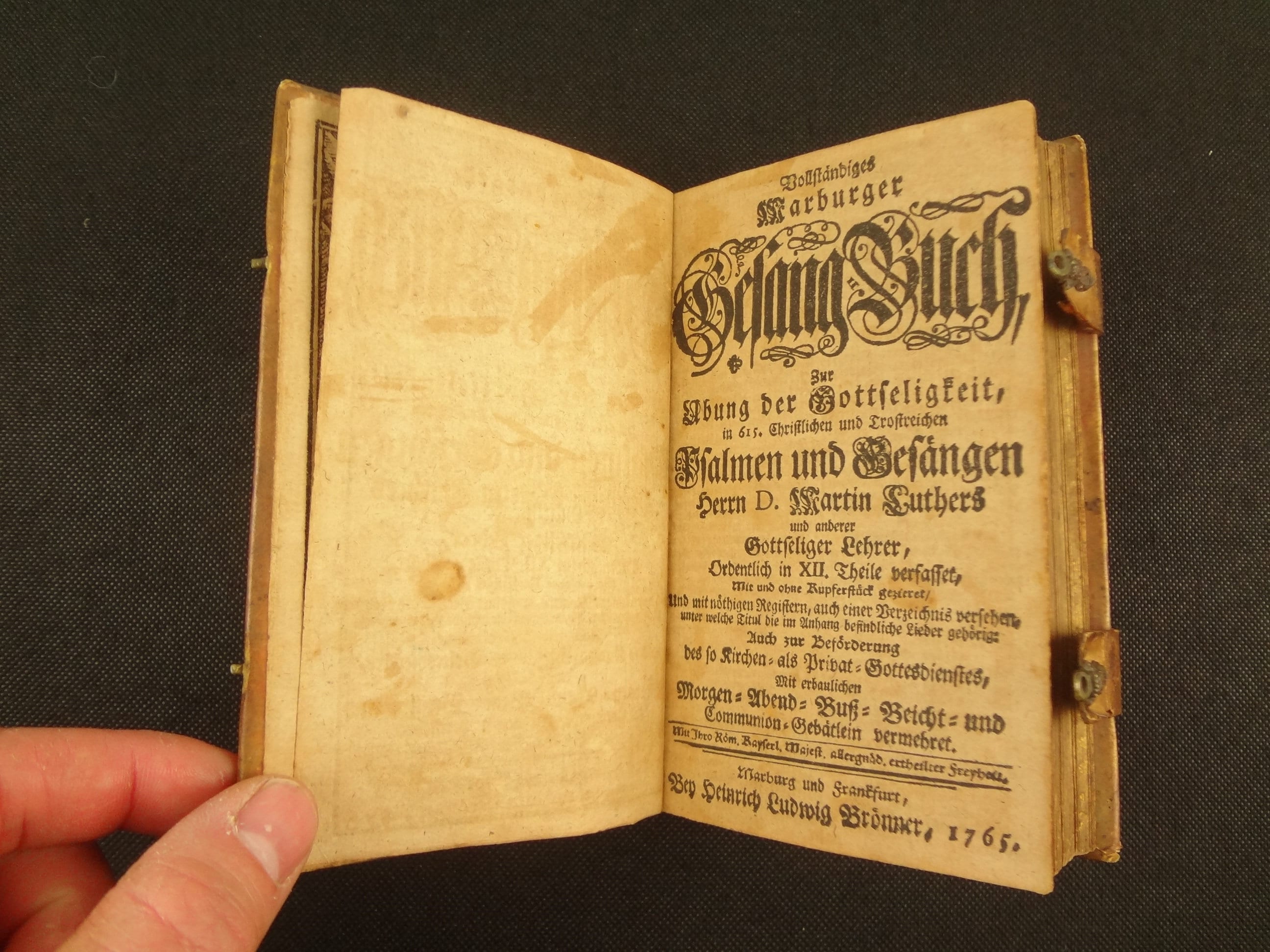 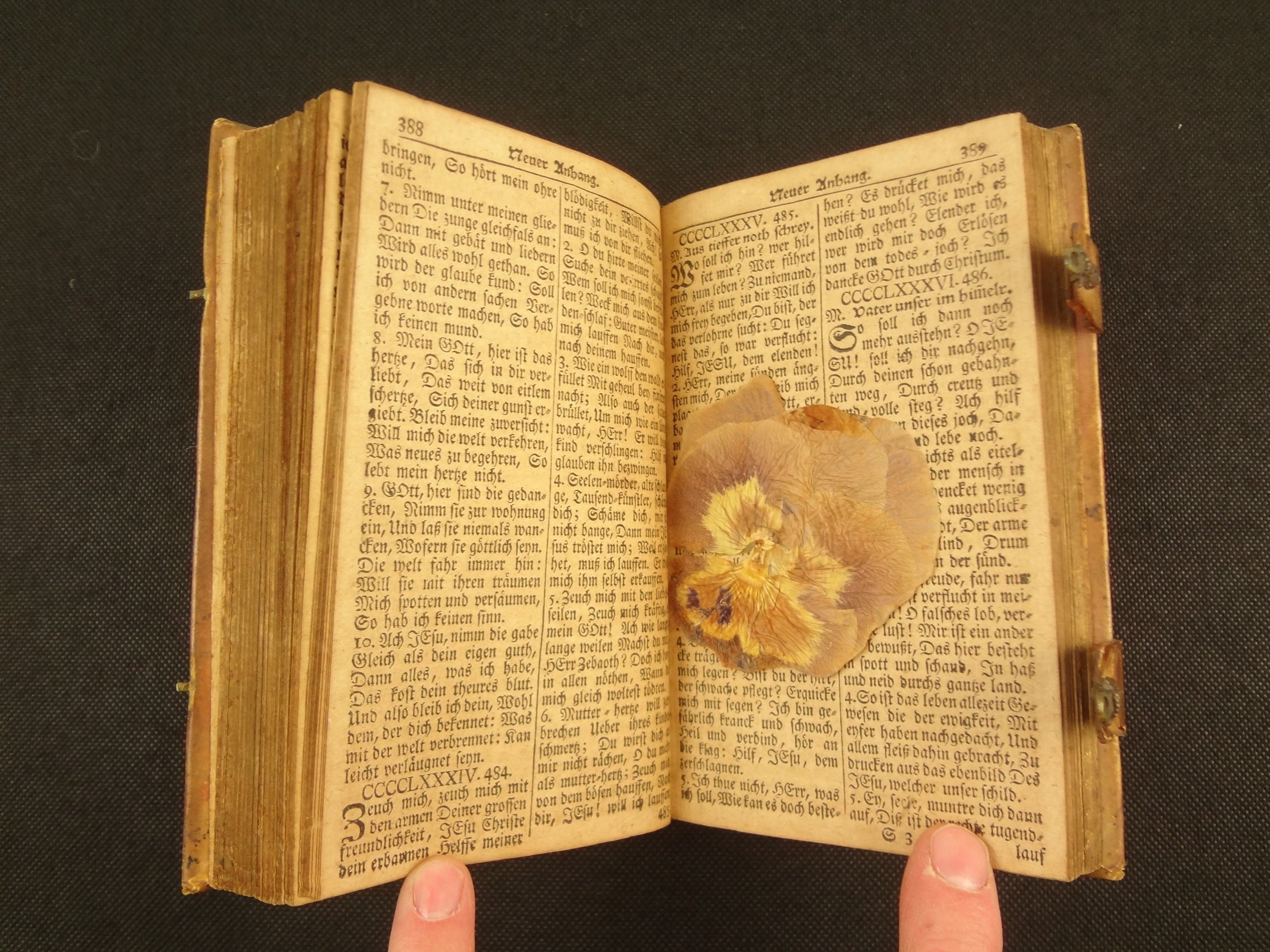 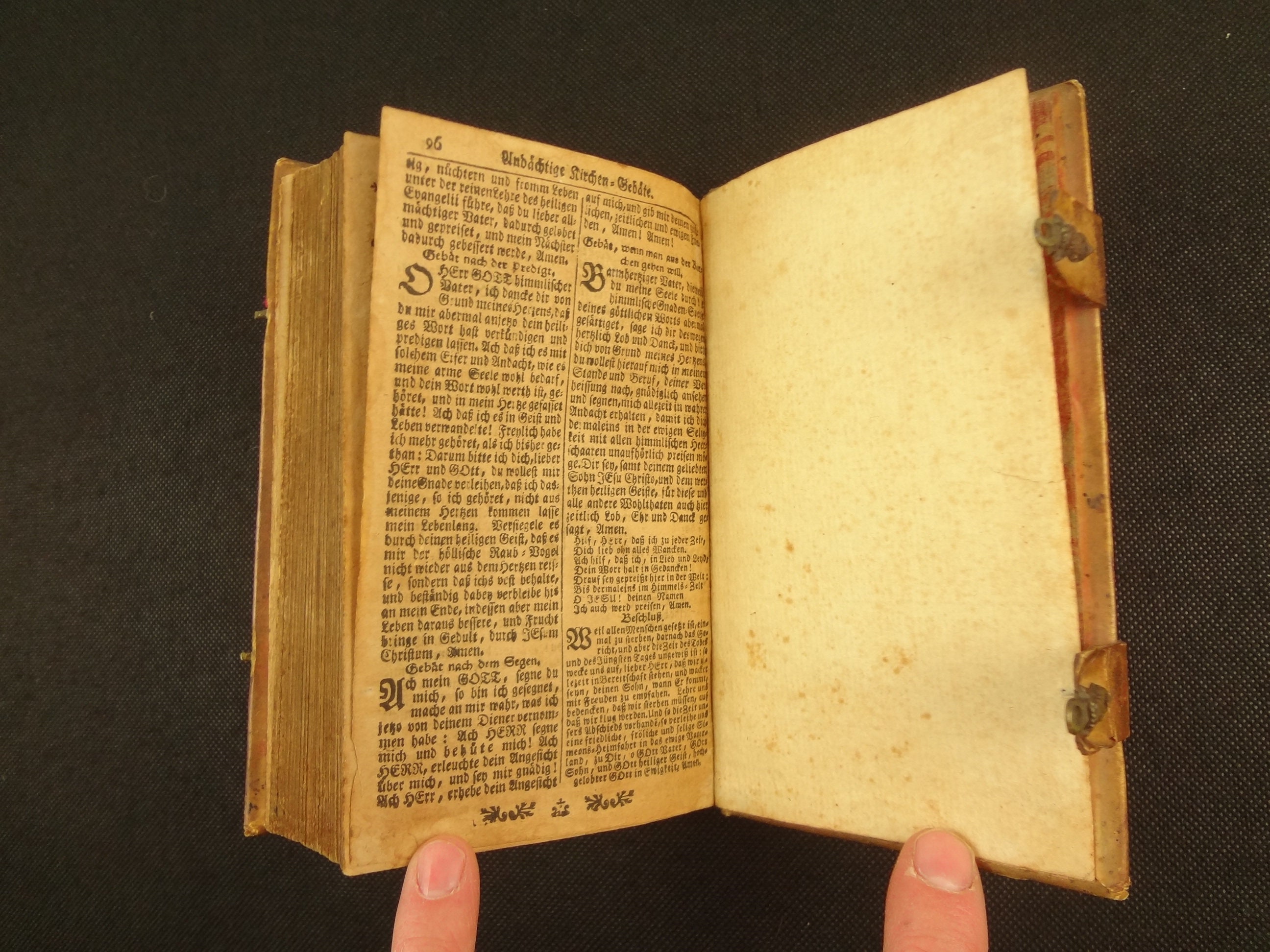 A handsome "peasant binding", with delightful traces of paint, holds this 1765 Gesang-Buch (hand-book) attributed to Martin Luther, with the provenance inscription of a Pennsylvania German Lutheran family, Laumann, located in Lancaster.

Gesang-Buch's were popular German devotional books of the time; this edition has the Psalms and chants of Martin Luther, along with other godly teachers (rough translation of the title).

This copy is bound in a handsome "peasant binding" - these bindings were mass-produced in Germany, but to the stylistic taste of the popular contemporary culture.

The Bridwell Library writes, "Although such bindings betray the strong influence of folk art, they are by no means bindings for peasants. Since they often incorporate gilt edges and brass clasps, we must assume that the people who purchased them were not only literate, but also possessed disposable income. The style originated in Hungary, spread through Germany, and also became popular in Scandinavia and the Netherlands for Bibles, prayer books, and hymnals presented as wedding gifts."

This example is quite attractive! The decoration of the boards is extensive. Some of the paint still remains, in a pleasingly patinated way. The clasps are cherubim and still function. The edges are gilt, with gauffering.

A heart-shaped vase, the flower extends out of, is stamped with "Singet u Spielet dem Herrn in Eurem Herken", taken from Ephesians 5:19, "sing and play (instruments) to the Lord in your hearts".

Yes, there is damage at the base of the spine, price reflects condition; I would have asked for $200 more if it wasn't there. This is a lovely example of a peasant binding, with great PA German provenance.

The blank unpaginated front endpaper holds a calligraphic inscription, dated 1768, of Adam Laumann in Lancaster (PA). The gothic nature of Adam Laumann's written name, the Pennsylvania German provenance, and the folk art styled binding all hints largely at art called "fraktur", although I'm not sure you can technically apply the term to this book since the binding wasn't executed in PA. You could probably make a strong argument either way, and I'm not hesitant to throw the word "fraktur" out, but I won't say that it is "fraktur".

Perhaps bitter-sweet, genealogies (Pennsylvania Settlers website) record that Adam Laumann, born in 1760, only lived until May 3rd, 1776. He was the son of Ludwig Laumann. Ludwig was a noted Lutheran elder, whose name is recorded at the building of the Lancaster church (Lancaster County, Pennsylvania, A History, Klein, 1924, p. 705). Ludwig also had his hand in printing, the 1761 Der Hoch-Deutsche Americanische Calender... listing him as one of the publishers, "in Lancaster bey Ludwig Laumann".

See pictures. Paint quite faded. Some rubbing at edges and corners. There is damage at the bottom half of the front joint and spine (see pictures); reflected in price with a $200 discount from where I would have otherwise priced it.

Free front endpapers not present (continuation of marbling from pastedowns).

Ex libris plate removed from pastedown but remnants remain. A little separation between frontis of Luther and title page illustration at gutter. Some toning, thumbing and fox spots throughout. Blank rear endpaper with a 2 cm tear at fore-edge.