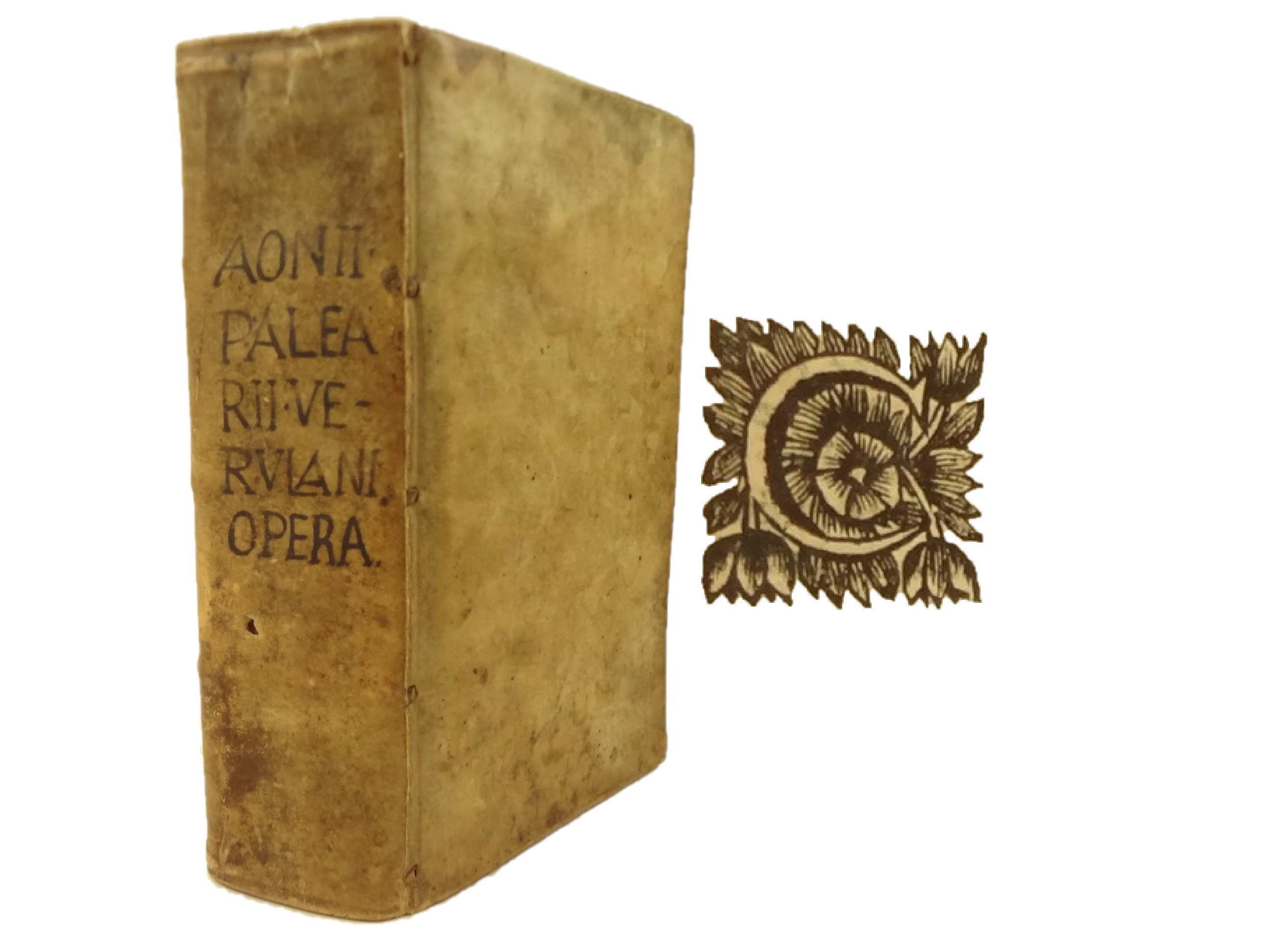 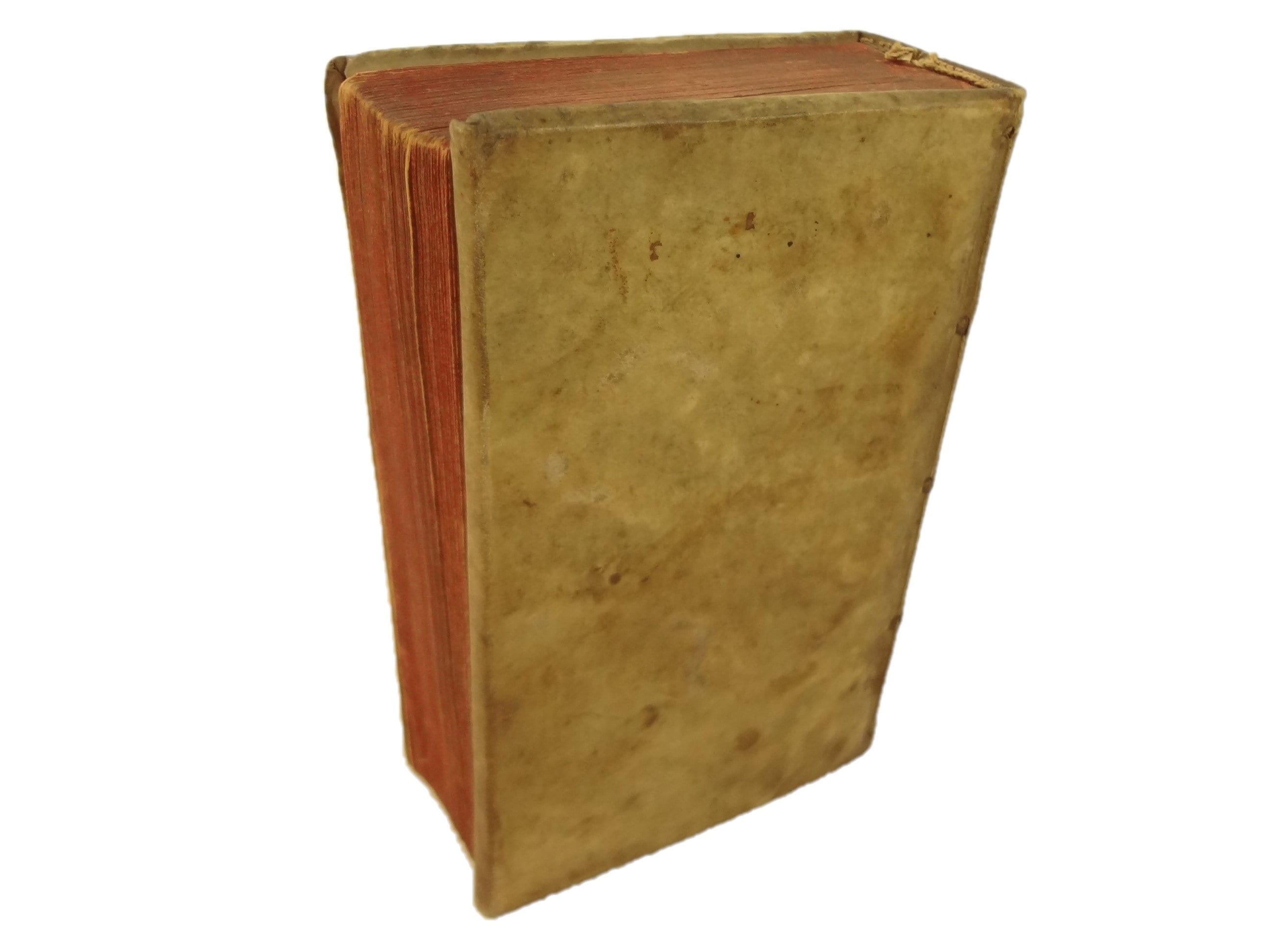 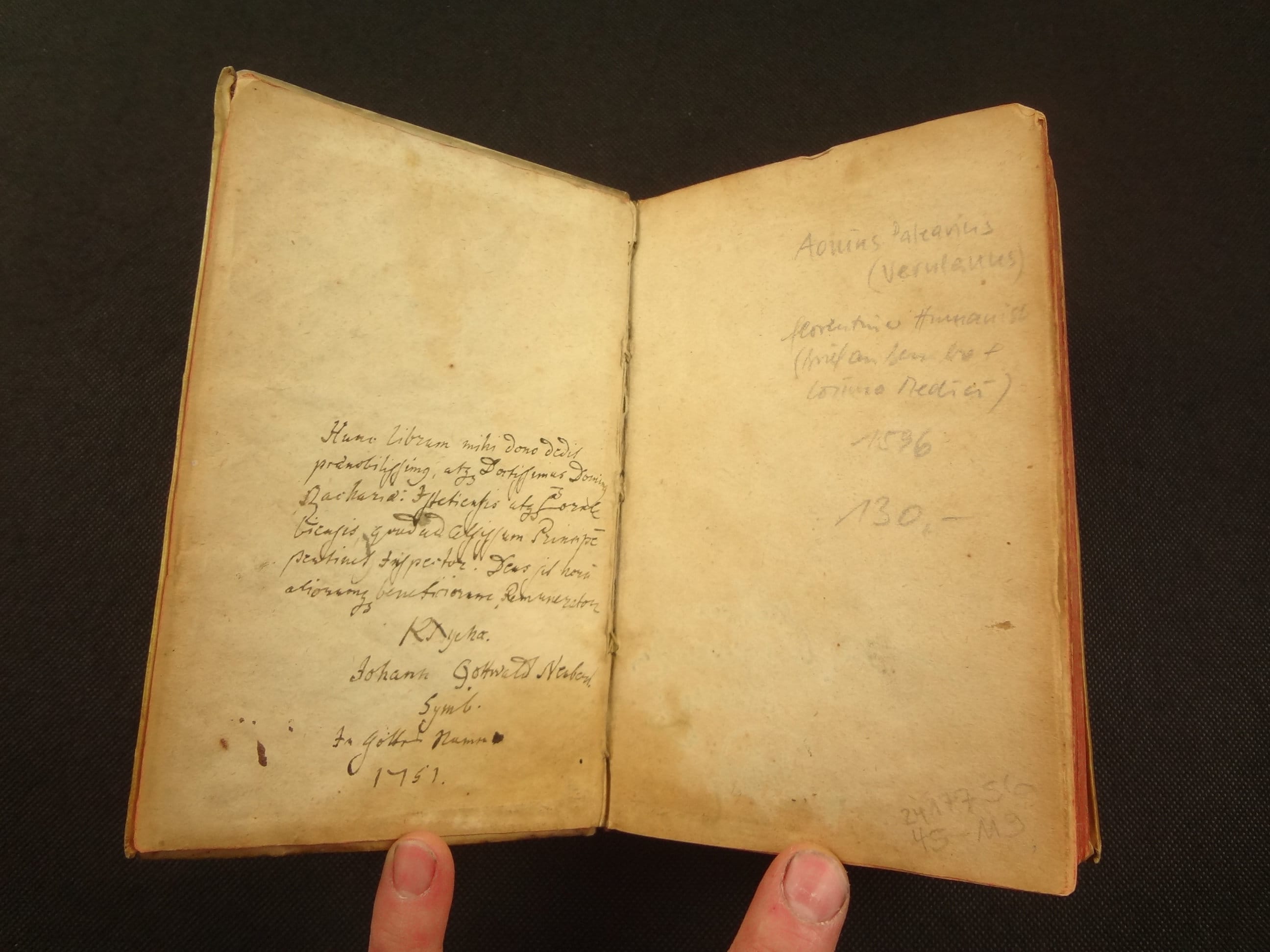 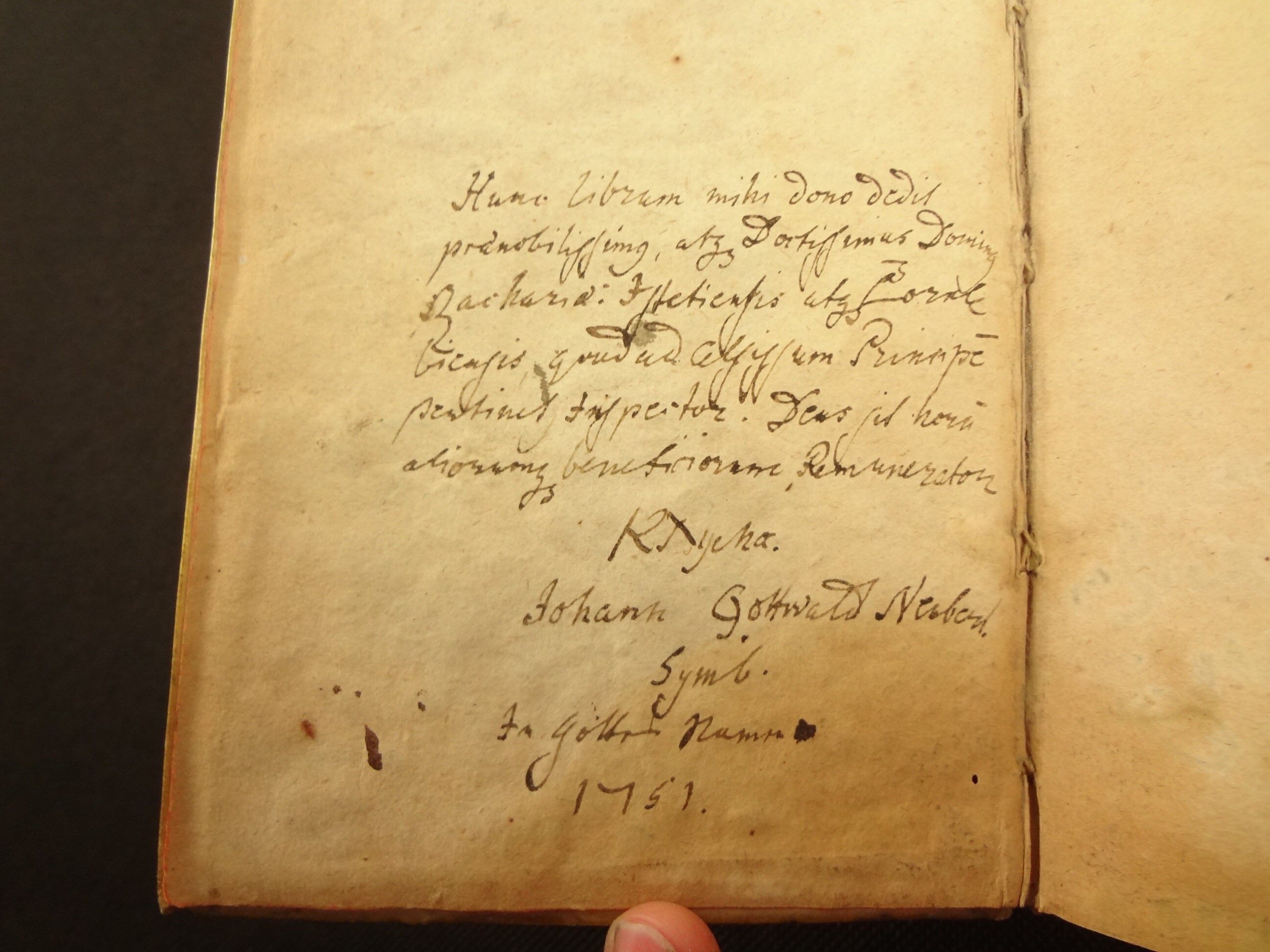 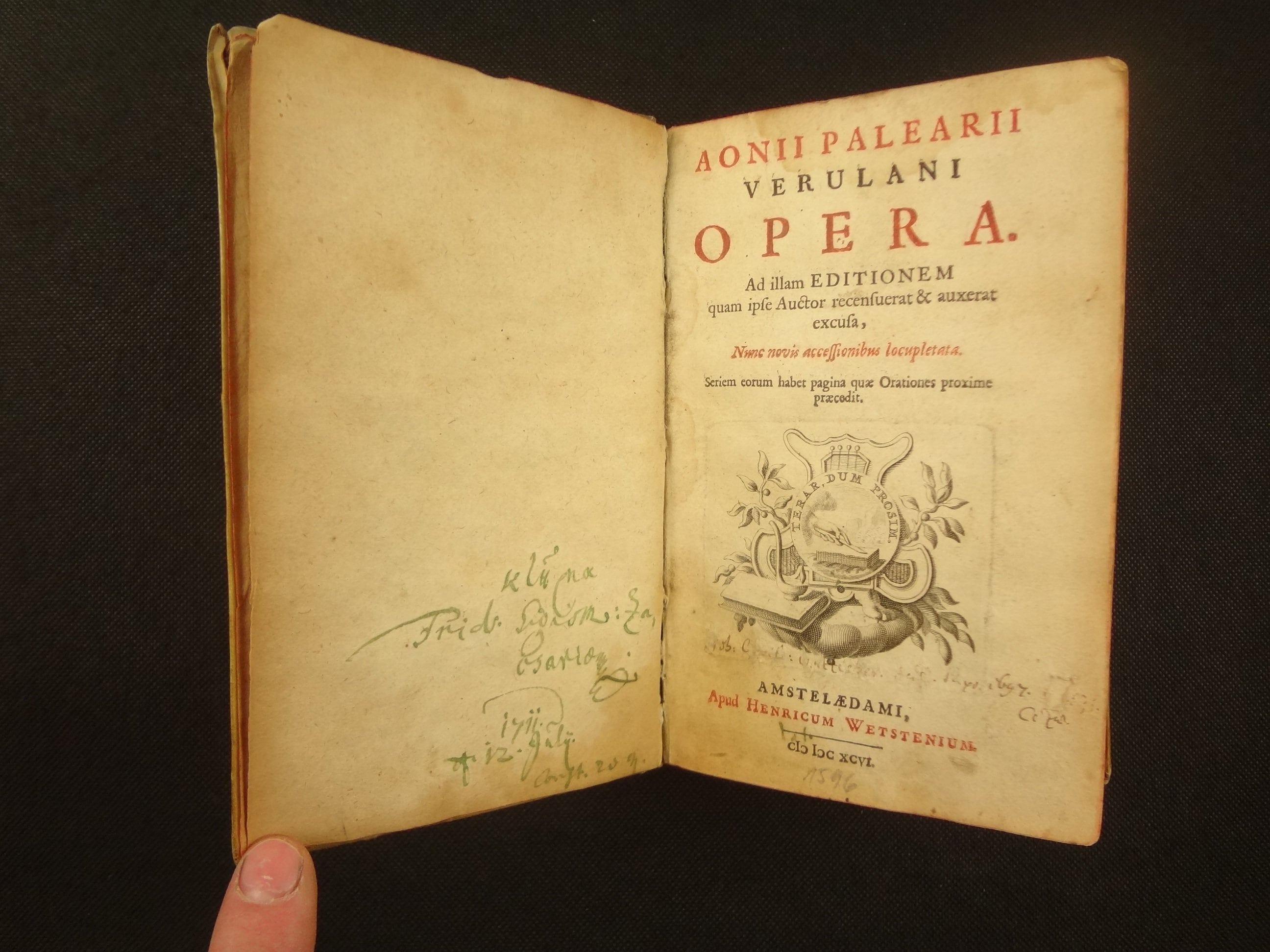 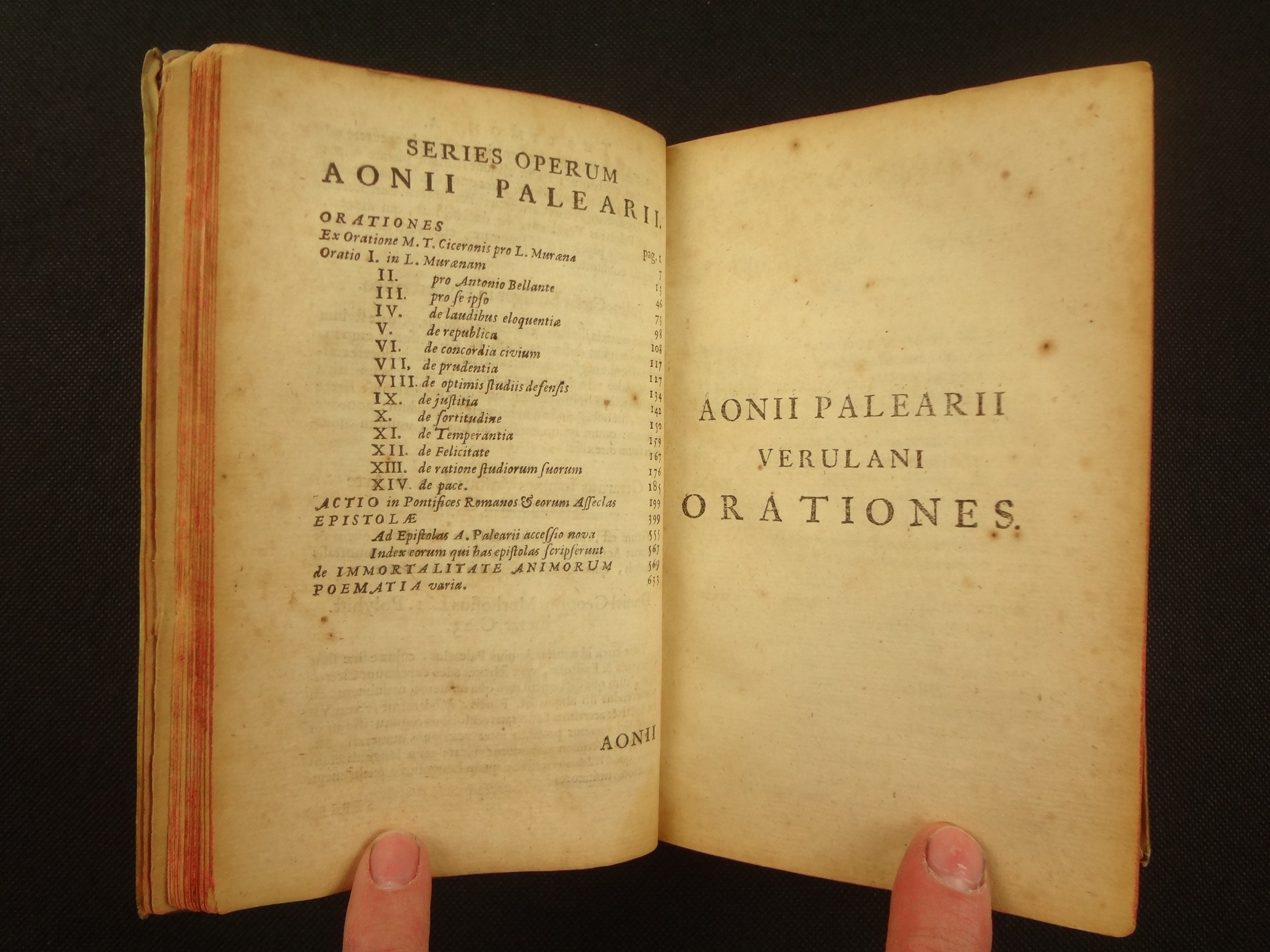 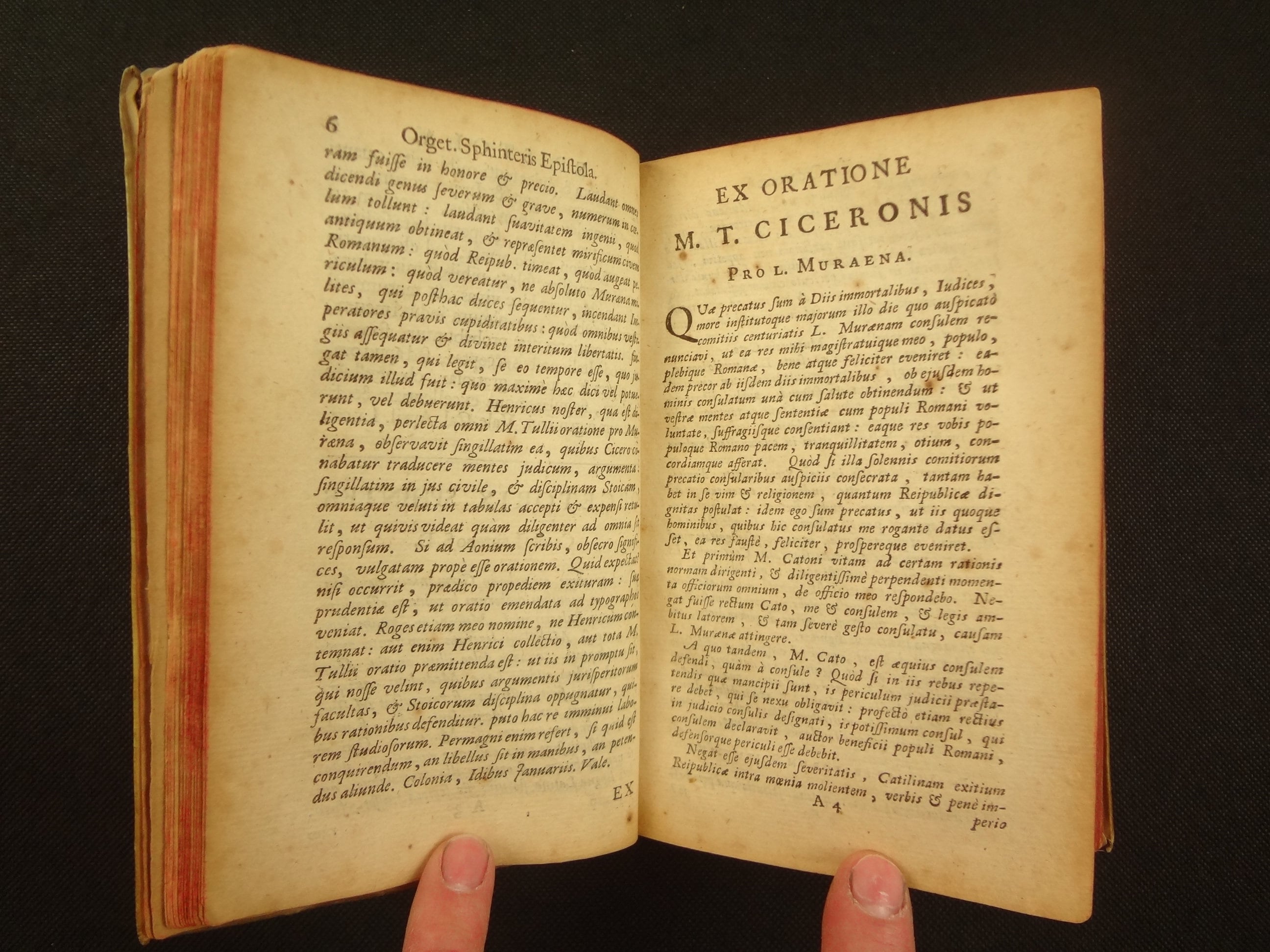 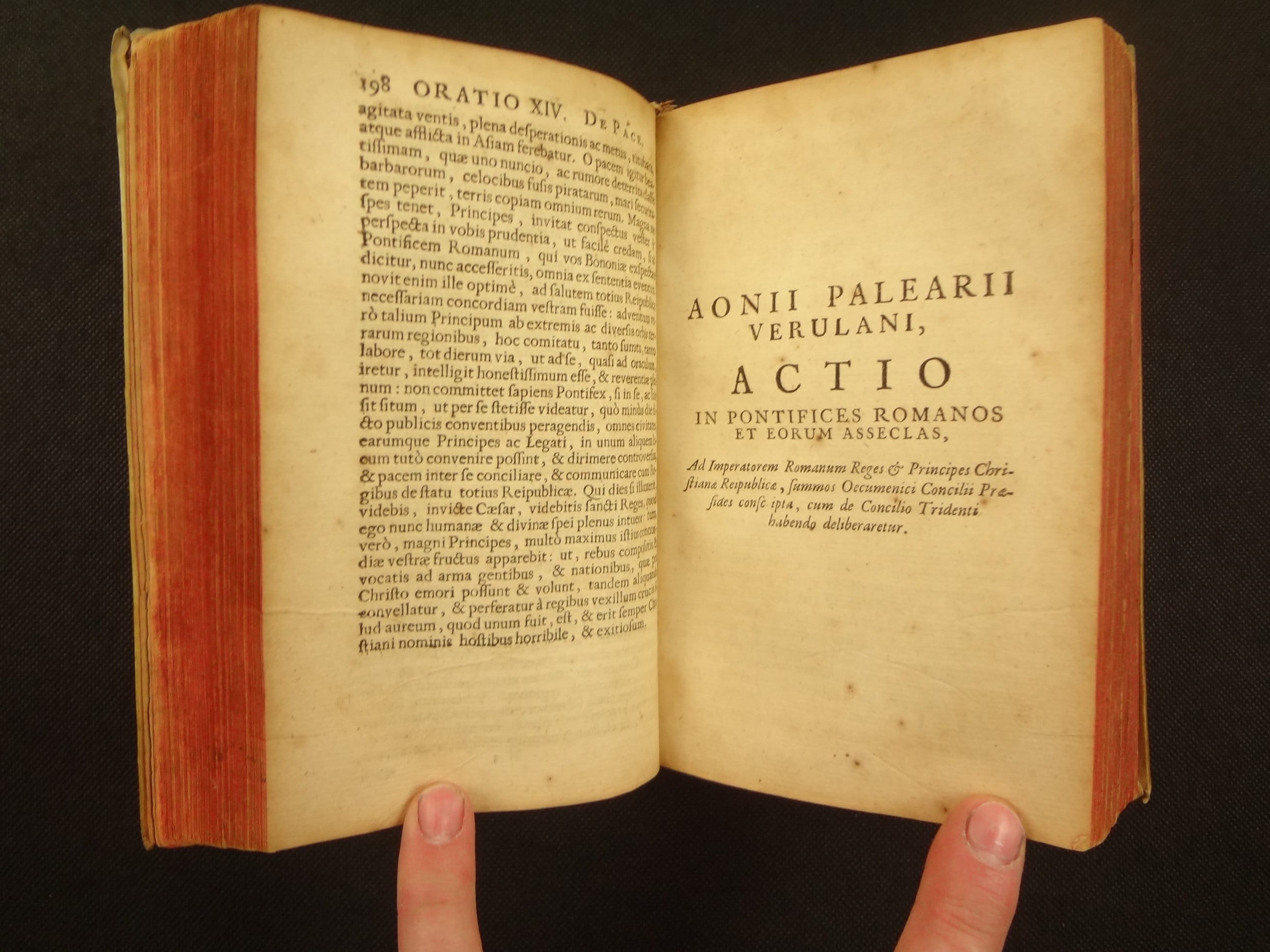 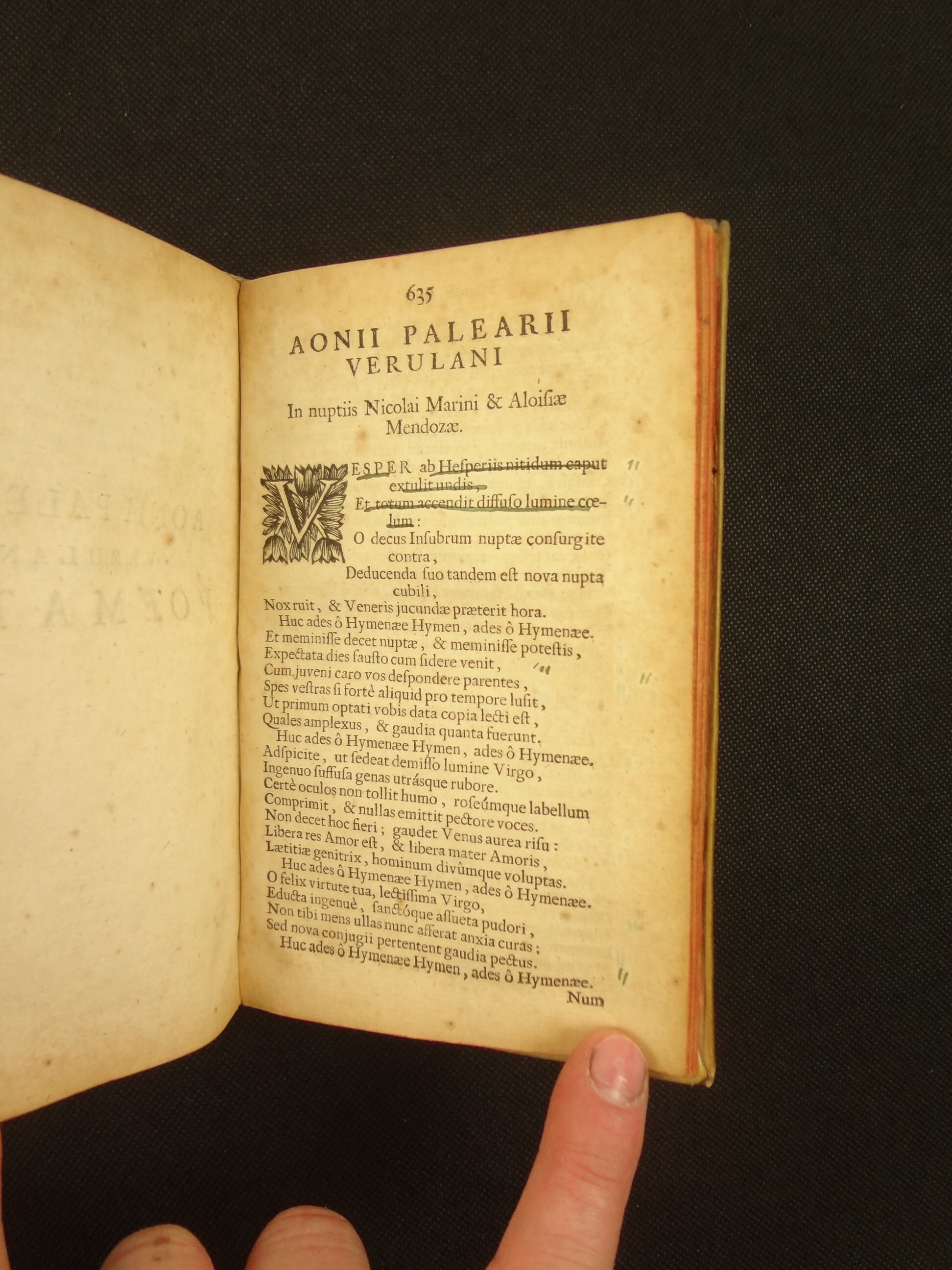 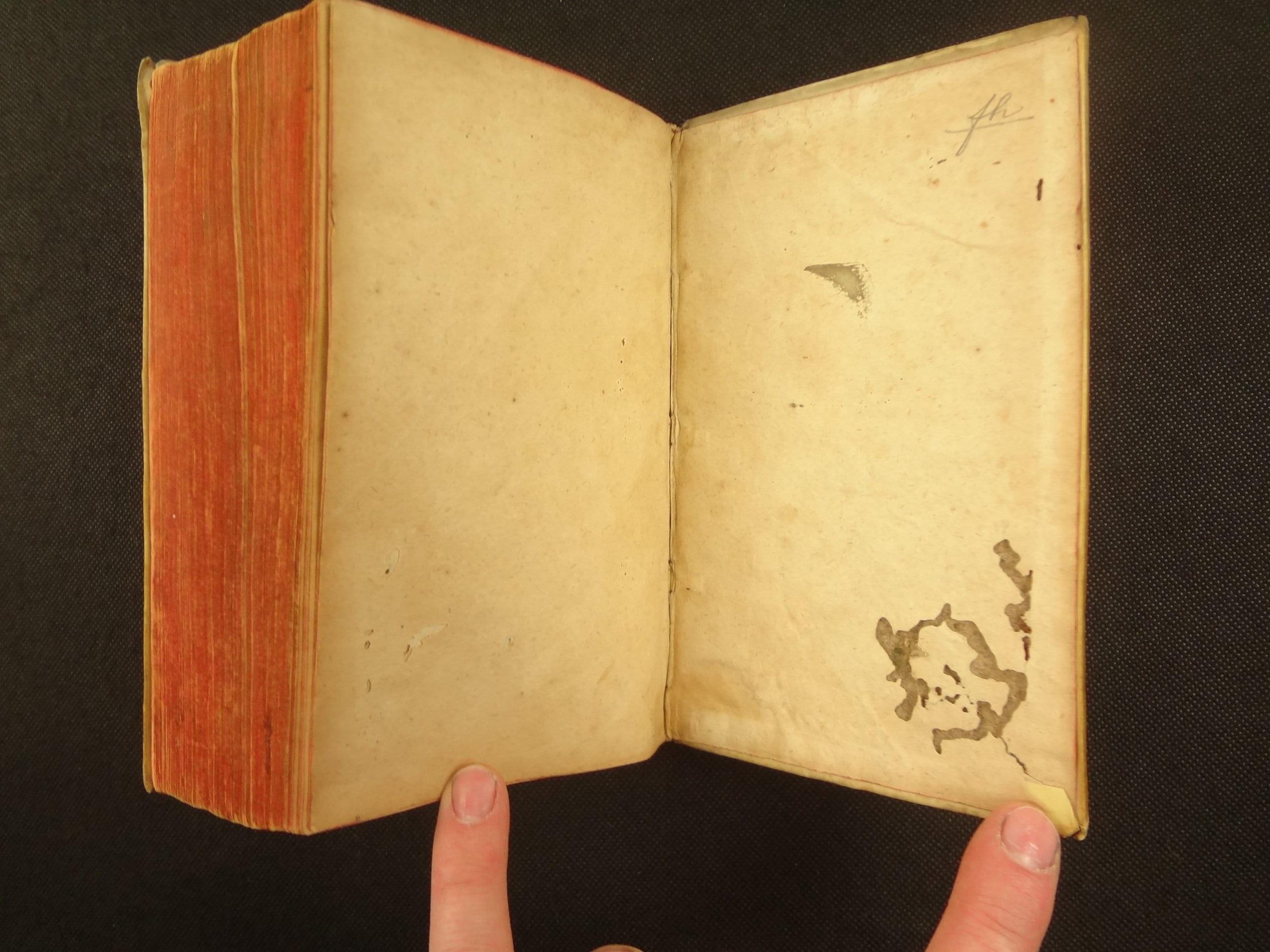 The Encyclopedia Britannica calls this 1696 edition of the 16th century Opera ("Works") of the Italian protestant martyr Aonio Paleario the "fullest". This copy with an interesting gift inscription from the 18th century German professor and author Johann Gotwald Neubert.

"He was born about 1500 at Veroli, in the Roman Campagna. In 1520 he went to Rome, where he entered the brilliant literary circle of Leo X. When Charles of Bourbon stormed Rome in 1527, Paleario went first to Perugia and then to Siena, where he settled as a teacher of Greek and Hebrew."

"In 1536 his didactic poem in Latin hexameters, De immortalitate animarum, was published at Lyon. It is divided into three books, the first containing his proofs of the divine existence, and the remaining two the theological and philosophical arguments for immortality based on that postulate. The whole concludes with a rhetorical description of the occurrences of the Second Advent."

"In 1542 the Inquisition made his tract Della Pienezza, sufficienza, et satisfazione della passione di Christo, or Libellus de morte Christi (The Benefit of Christ's Death), the basis of a charge of heresy, from which, however, he successfully defended himself. In Siena he wrote his Actio in pontifices romanos et eorum asseclas, a vigorous indictment, in twenty testimonia, against what he now believed to be the fundamental error of the Roman Church in subordinating Scripture to tradition, as well as against various particular doctrines, such as that of purgatory; it was not, however, printed until after his death (Leipzig, 1606). In 1546 he accepted a professorial chair at Lucca, which he exchanged in 1555 for that of Greek and Latin literature at Milan. Here about 1566 his enemies renewed their activity, and in 1567 he was formally accused by Fra Angelo, the inquisitor of Milan. He was tried at Rome, condemned to death in October 1569, and executed in July 1570." - Wikipedia (but mostly Encyclopedia Britannica)

The pastedown has a lengthy Latin gift inscription from the 18th century professor and author Johann Gottwalt Neubert. Neubert has three titles, on Latin subjects, recorded in OCLC. The title page from one of his works (De Splendide Apud Romanos Natorum in Litteras Promeritis) states, "S. Disciplinae Cultore et Societatis Lat. Jen. Collega Ordinario", so it seems he was associated with the University of Jena. The 18th century was a high point for the university of Jena, with such notable professors as Schiller.

See pictures. Well-worn vellum binding with much thumbing, soiling, etc.; title on spine in an old hand. Lengthy 1751 gift inscription on pastedown. Bookseller notes on flyleaf recto, "1711" date on verso of flyleaf. Erasure of ex-libris inscription on title page has left a little damage, including a 1 cm hold at the fore-edge, no text affected. Moisture marks from the edges occasionally throughout; mostly only marginal and at the top-edge. Some thumbing. Some fox spots throughout. Toning to pages, more near edges. A handful of manuscript annotations, strikethroughs, etc. Worm tracks in rear board, which also reached the facing pages, leaving several small holes on last printed leaf.