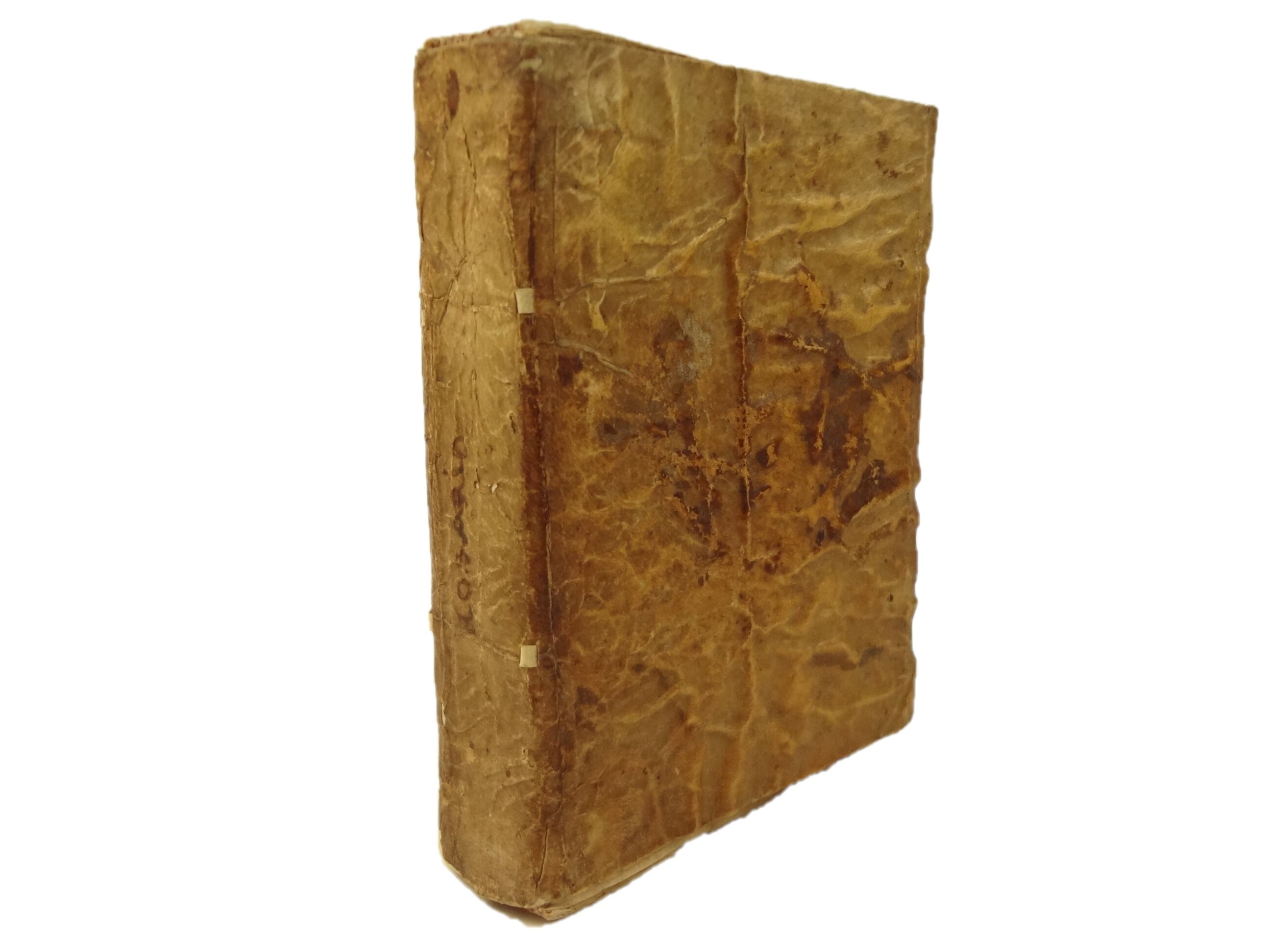 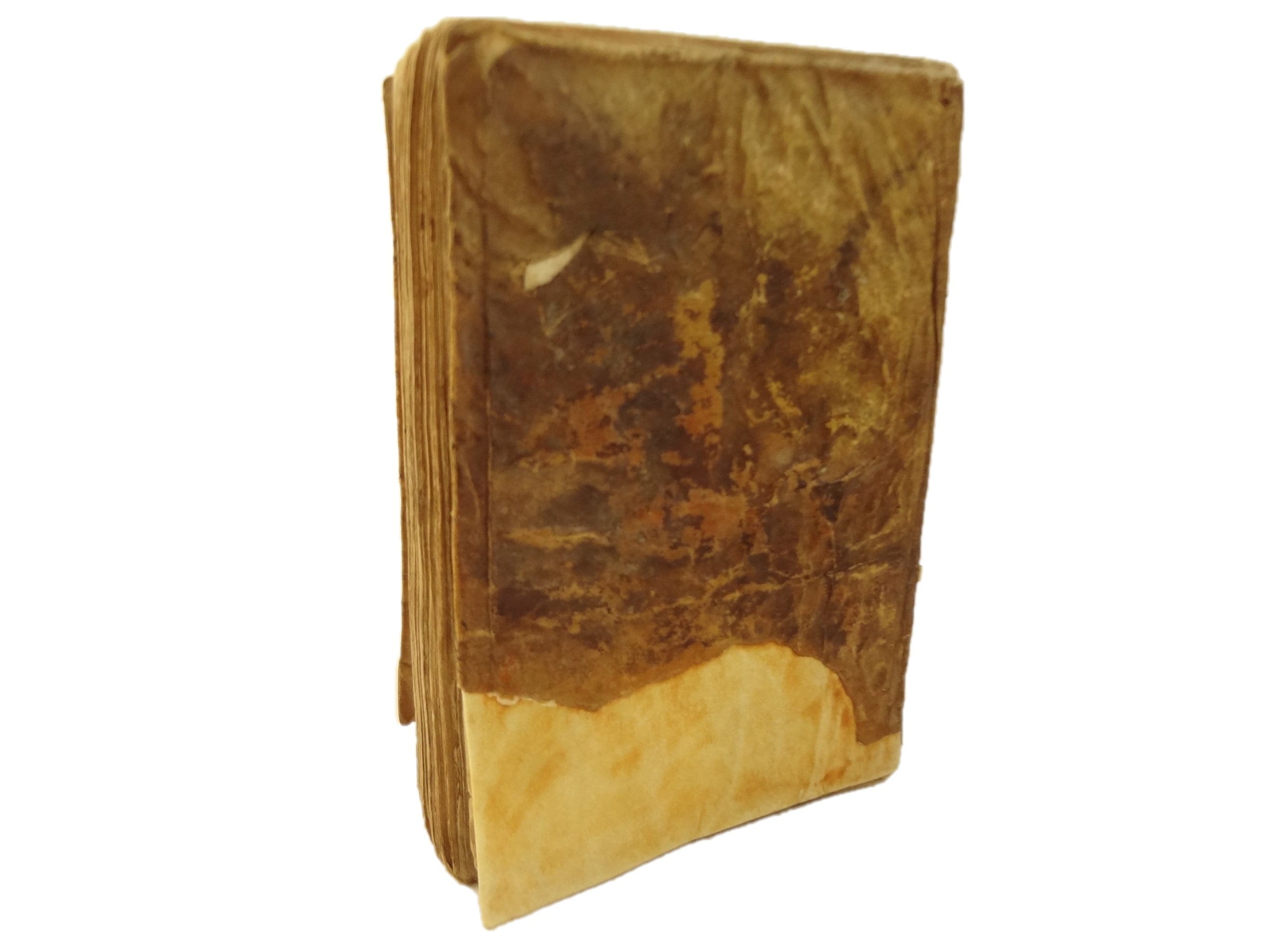 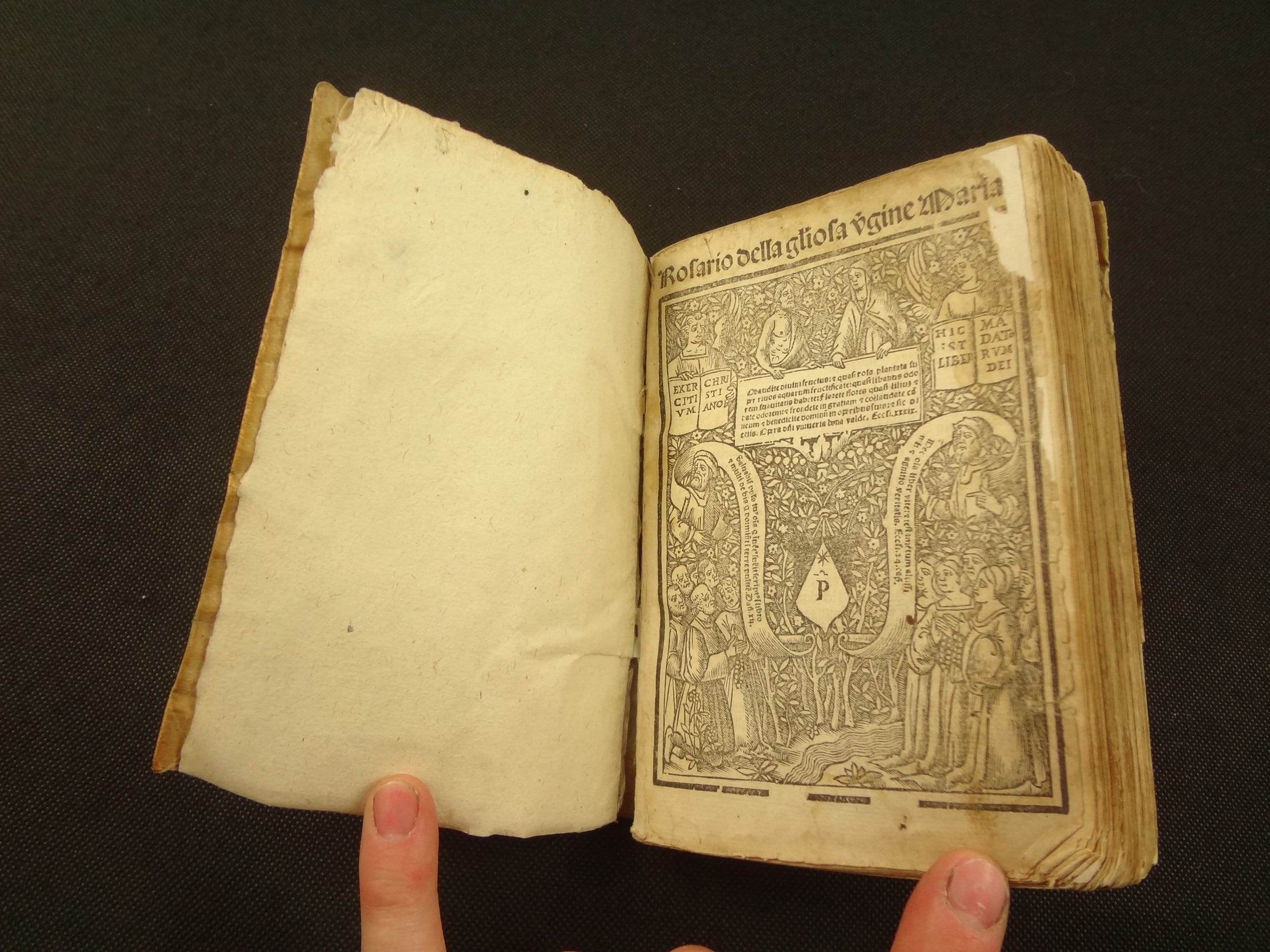 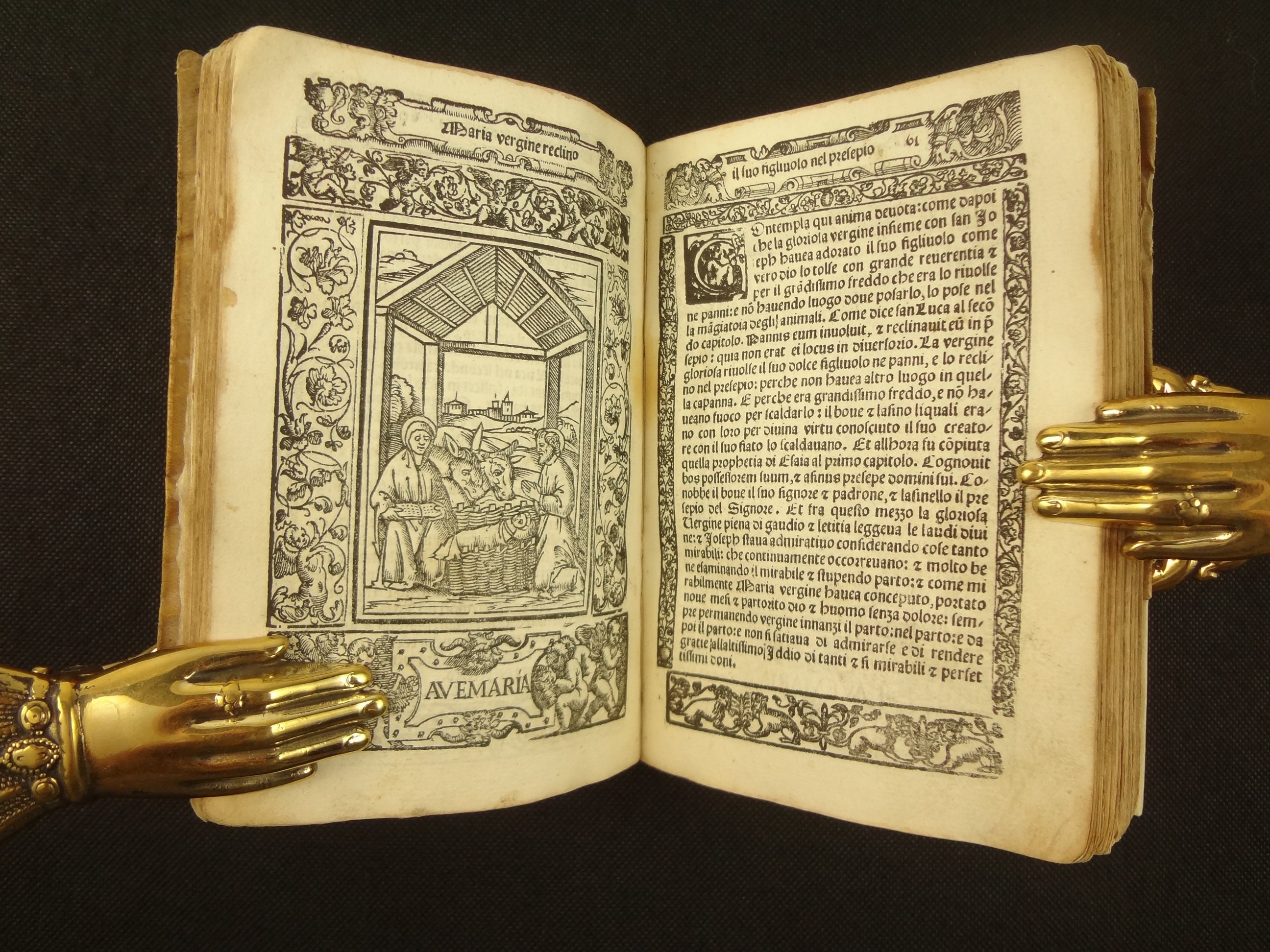 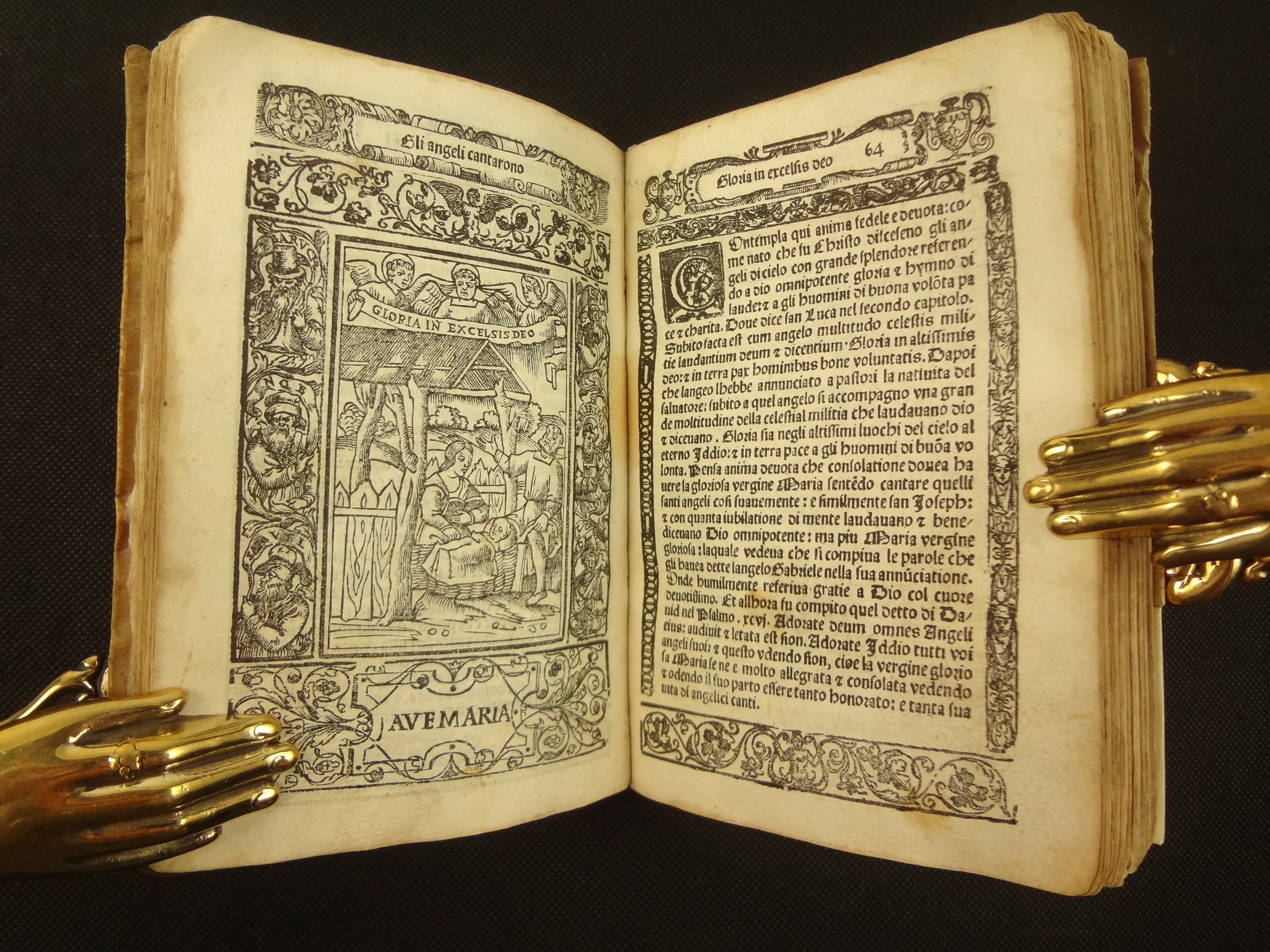 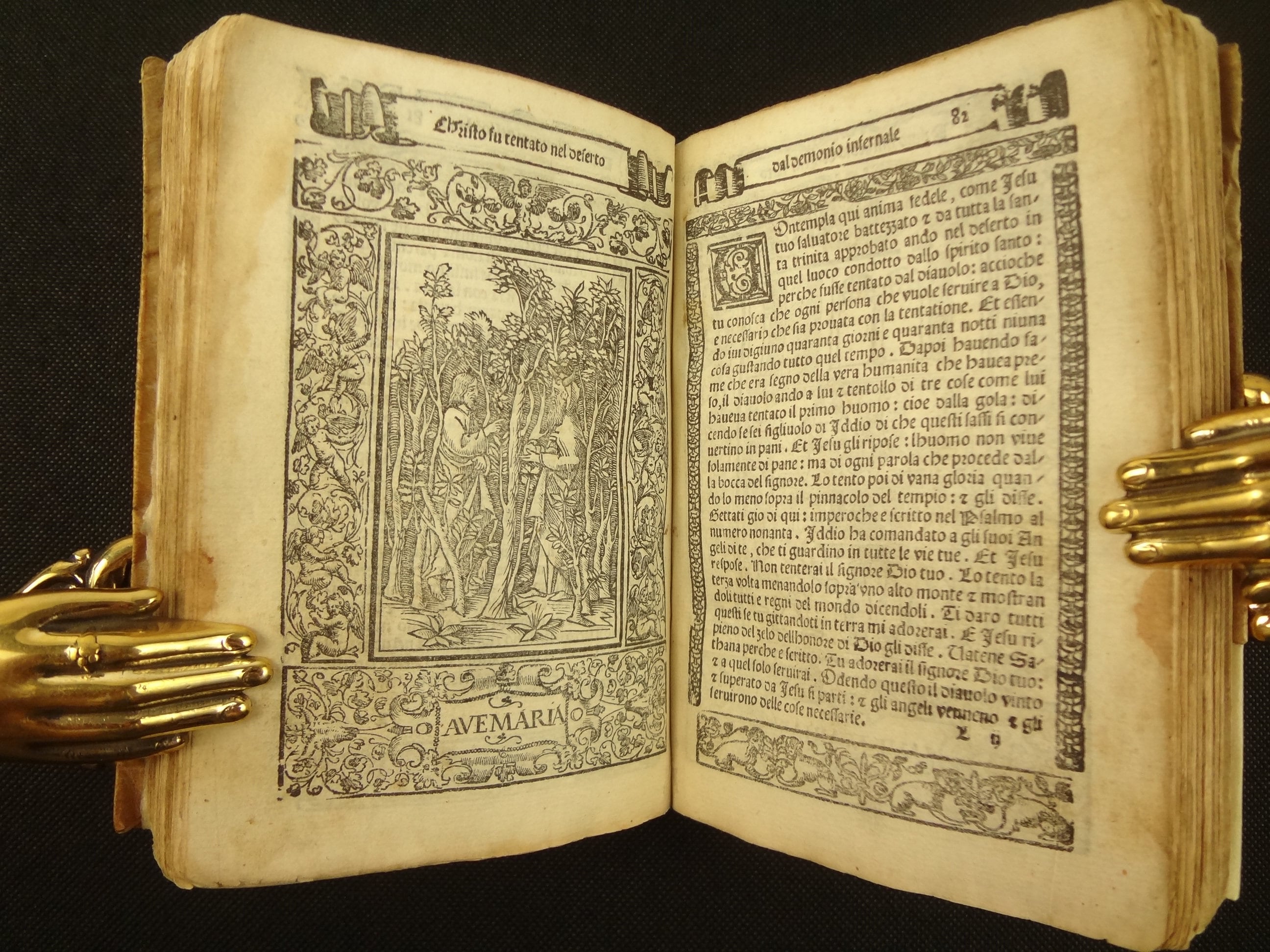 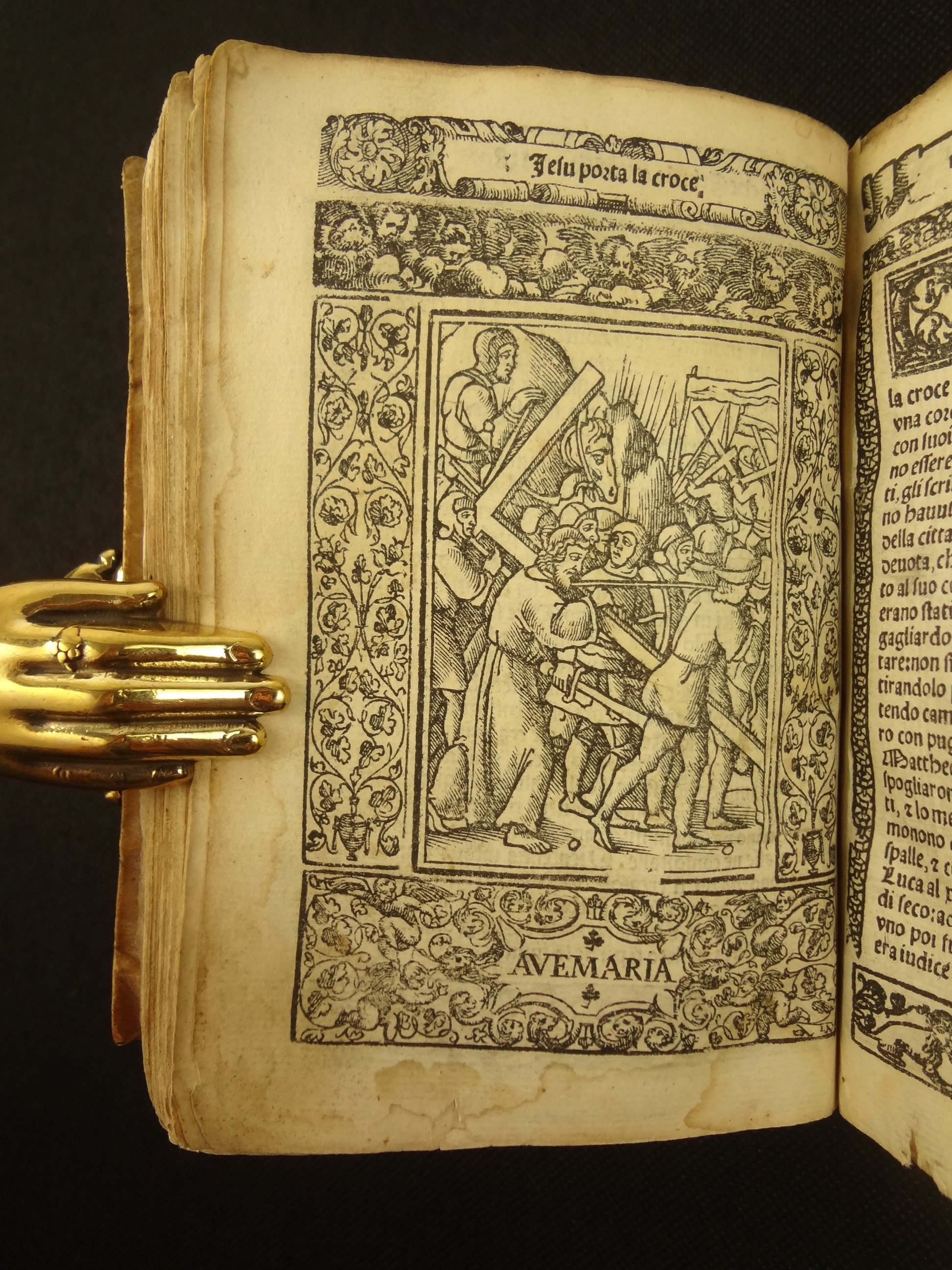 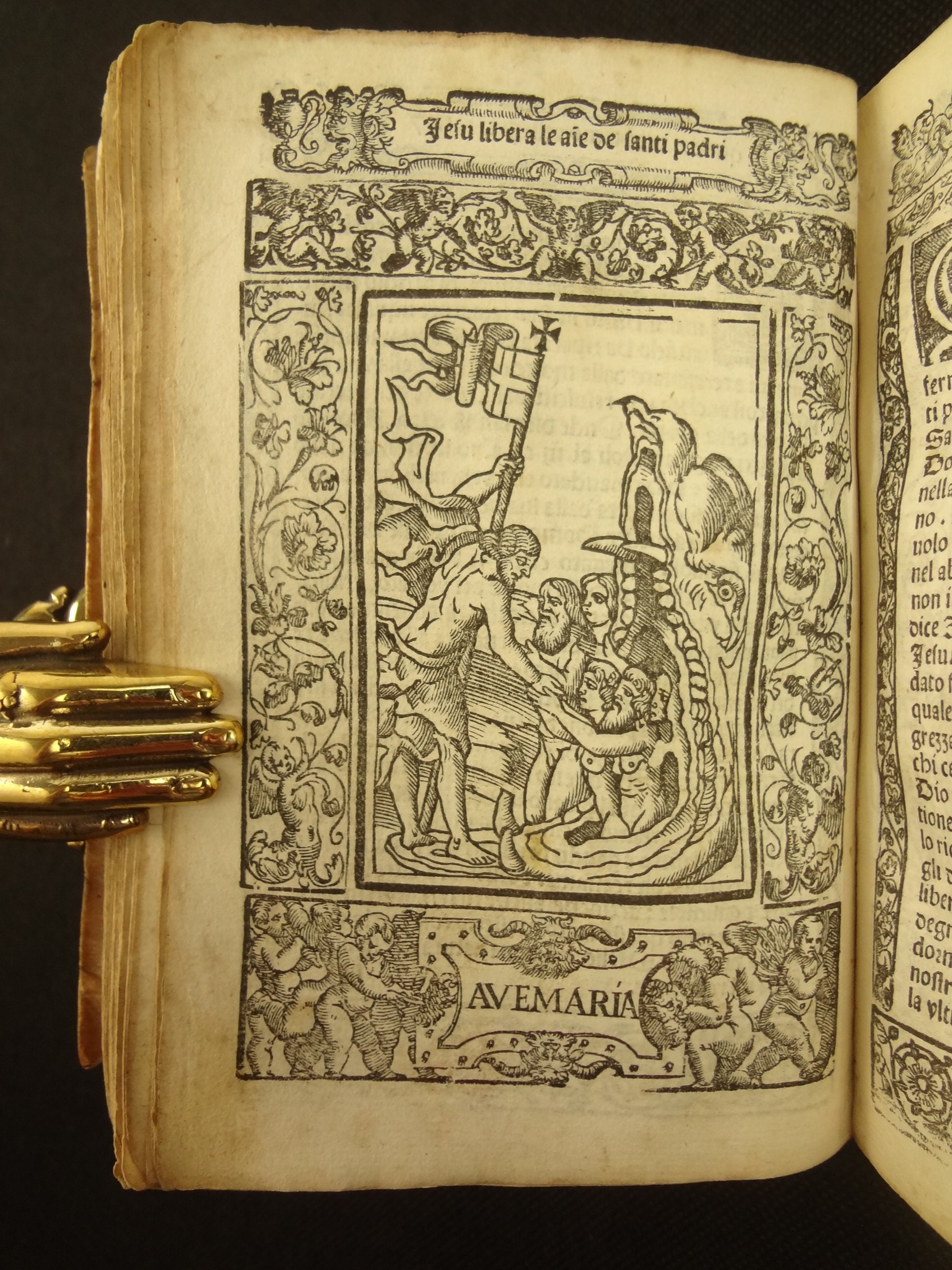 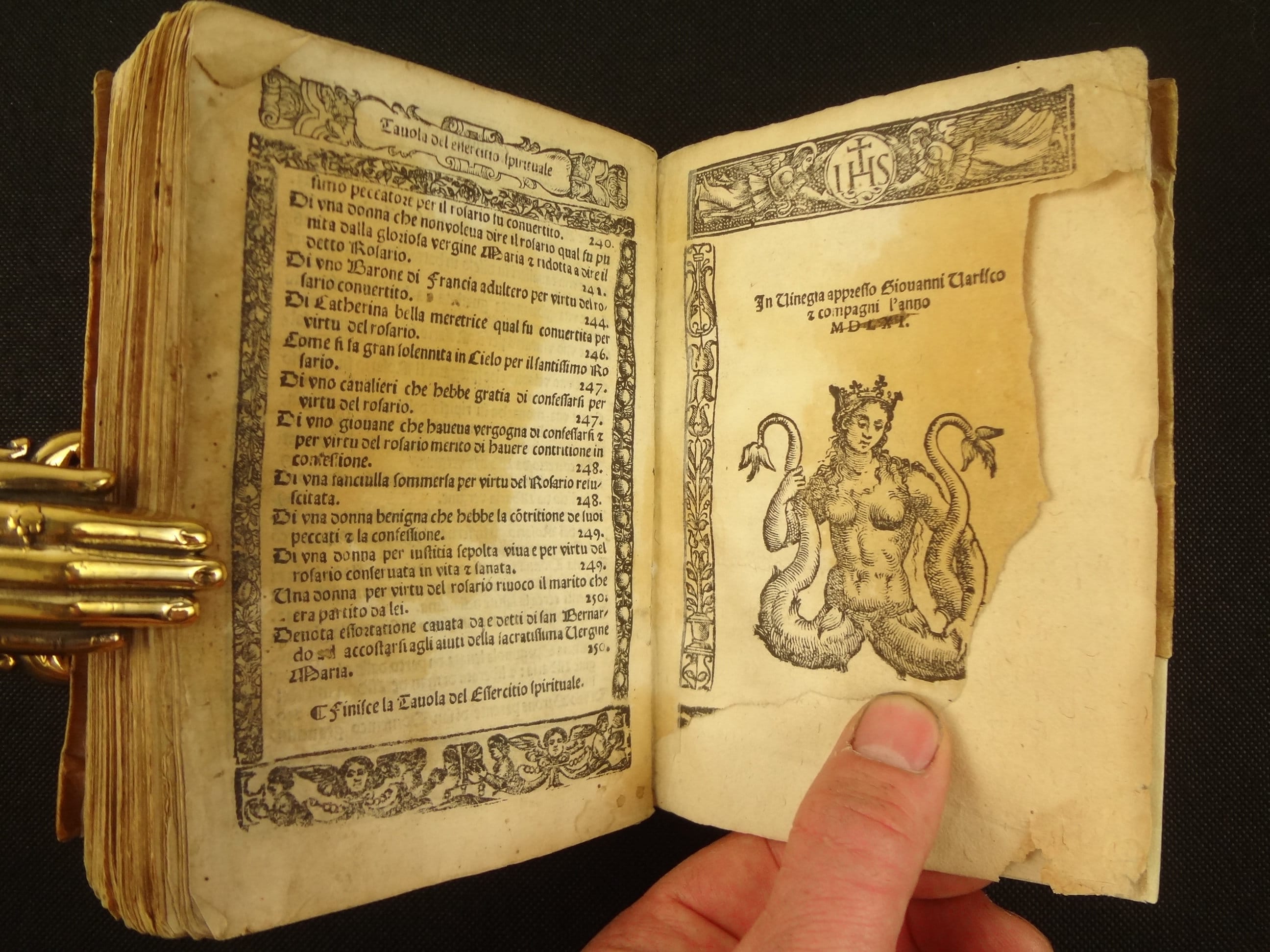 A fascinating, popular and important 16th century devotional work, now difficult to acquire. First printed in 1521, this work was designed to appeal also to the illiterate, per the author's introduction (Epistola Prohemiale) with heavy use of woodcuts and iconography. Nearly all the pages of devotion are accompanied by a related full-page woodcut. A large portion of the population was illiterate in the 16th century, so this work became immensely popular (estimated 40 editions) as a visual guide to the rosary and life of Christ.

Unfortunately, 51 of the 256 leaves have been harvested from this copy (but, in a strange way, also a fascinating tangent on bookselling). While this copy is missing 20% of the work, I'll price it at a 75% discount. Using Vialibri, the most affordable copy I can find is offered by Libreria Scripta Manent and is roughly $5,250 USD.

This edition is printed using the 1st edition of 1521, sharing many of the same woodcuts (including the title page), with only a few changes to the typology. Later 16th century editions were updated with new woodcuts and design.

"From the beginning, publications on the Rosary came accompanied by lavish xilographic illustrations. The most striking of these can be found in the edition of the Rosario della gloriosa Vergine Maria by Alberto da Castello from 1521 which contains a wealth of illustrations. (It) enjoyed great success, as shown by the approximately forty editions that were printed during the century. The events of Christ's life are represented in words for those who can read and in images for the illiterate, which also served for visual meditation." - (Erminia Ardissino, Domestic Devotions in Early Modern Italy, p.347-351, 2019)

Alberto da Castello, born in the middle of the fifteenth century in Venice, joined the Dominican order around 1470 and wrote several devotional, liturgical, historical and canonical texts. In the Epistola prohemiale of his Rosario della gloriosa Vergine Maria he says that he wrote the meditations and organised the images 'acciò che gli idioti che non sanno legere habbino el modo de contemplare gli divini beneficii et de questa contemplatione ne habbino qualche frutto spirituale'.( fol. 6r. 'So that even the illiterate have a means to contemplate gifts from the divine and to receive spiritual fruits from such contemplation' (translations are mine).He states that he writes especially for the 'ignoranti, illetterati, idioti', and that a good Christian must hold the mysteries of the Rosary deep in his heart. (Ardissino, p. 347)

The Universal Short Title Catalogue, and Worldcat, combined, show only four copies of this year's printing in the World's libraries (Libraries of Asti, Bergamo, Udine and UCLA) .

Searching Vialibri for copies on the market, for all editions with this typography, I find only three copies, all priced above $5,000 USD (Libreria Scripta Manet, Livraria Castro e Silva, James Gray Bookseller).

About the Stolen Pages -

Books are printed in large sheets, then folded and cut; in this book, each printed sheet formed eight leaves. Each of these folded sheets are called gatherings. Whoever harvested this work specifically took from the beginning and end of the gatherings. When the gatherings were gathered together and bound, this left the theft undetectable unless you paid attention to the pagination and signatures (small guides for the printers and binders at the bottom-edge). Many of the first and last leaves of a gathering were taken. This particular technique allowed them to sell many woodcuts, but also sell the book; I find the practice absolutely nefarious.

Based on the age of the repairs, and a 1938 ticket inside the book, I'd guess the harvesting happened sometime in the early 20th century. At this time, there was a different opinion on "breaking" books and putting woodcuts, prints, manuscript leaves, etc. into the hands of the public at reduced cost. Otto Ege's work on distributing manuscript leaves is probably the most famous example from this time period.

"Large woodcut title vignette, with inset verses from the Old Testament, and insignum "P", all within black ruled border; running titles within woodcut ribbons at head of each page; text within 5-panel borders decorated with birds, fruits, leaves, and cherubs; large grotesque initials on black criblé backgrounds; smaller ornamental initials; text illustrated with full-page woodcuts of scenes from the life of Christ; Varisco's device on recto of final leaf, featuring a crowned Siren, with bifurcated mermaid tail, holding a tail in each hand" - Worldcat entry

Missing 51 leaves, mostly harvested at the beginning and end of signatures. Complete list at end.

Vellum binding shrunk, cockled (wavy), soiled, etc.; it has been repaired with an insert on the back leaf. Pages toned throughout with occasional dog-eared page, page edge chip, fox spot, and thumb. Corners lightly bumped (due to softcover vellum binding not extending to edges).