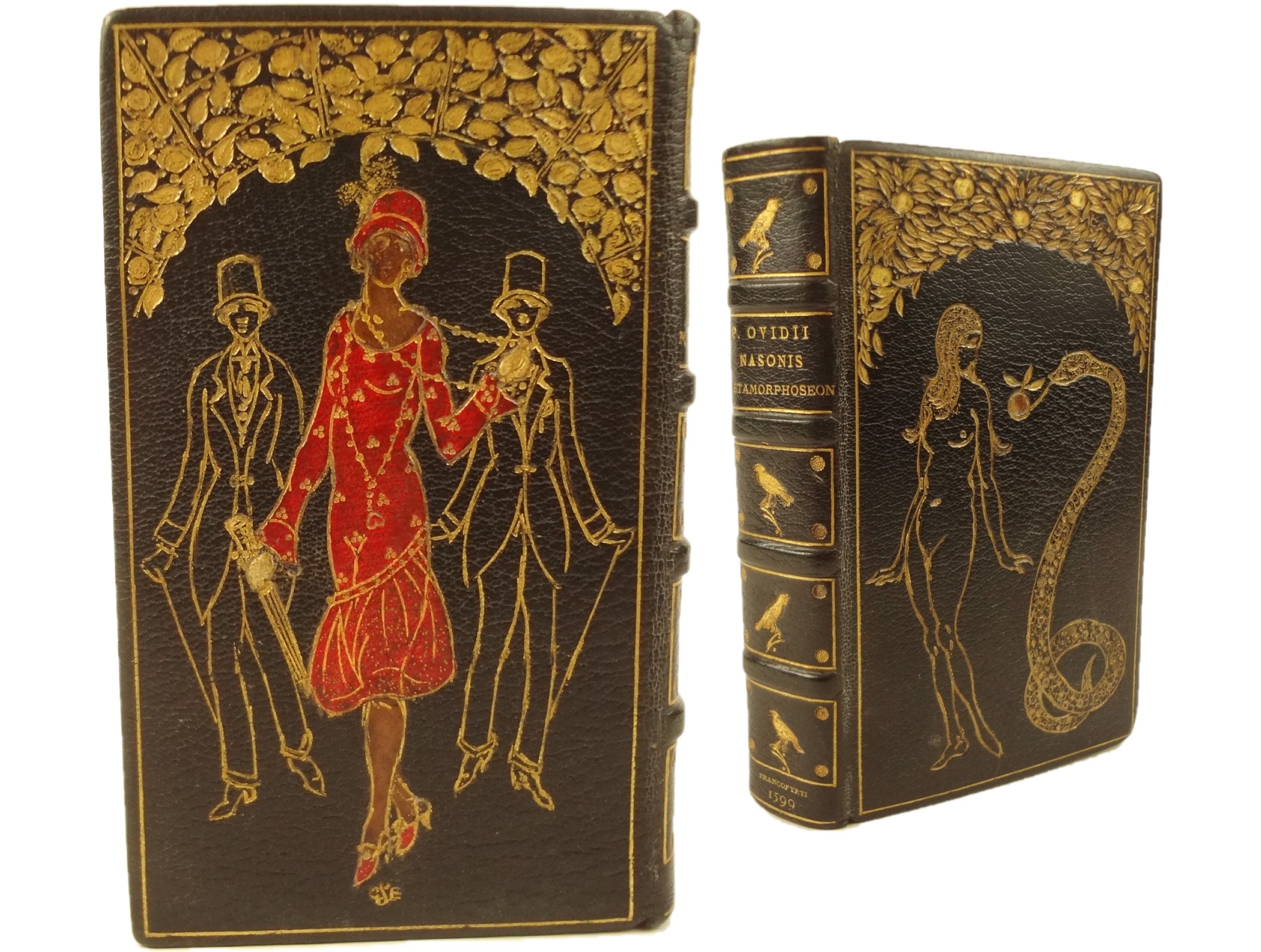 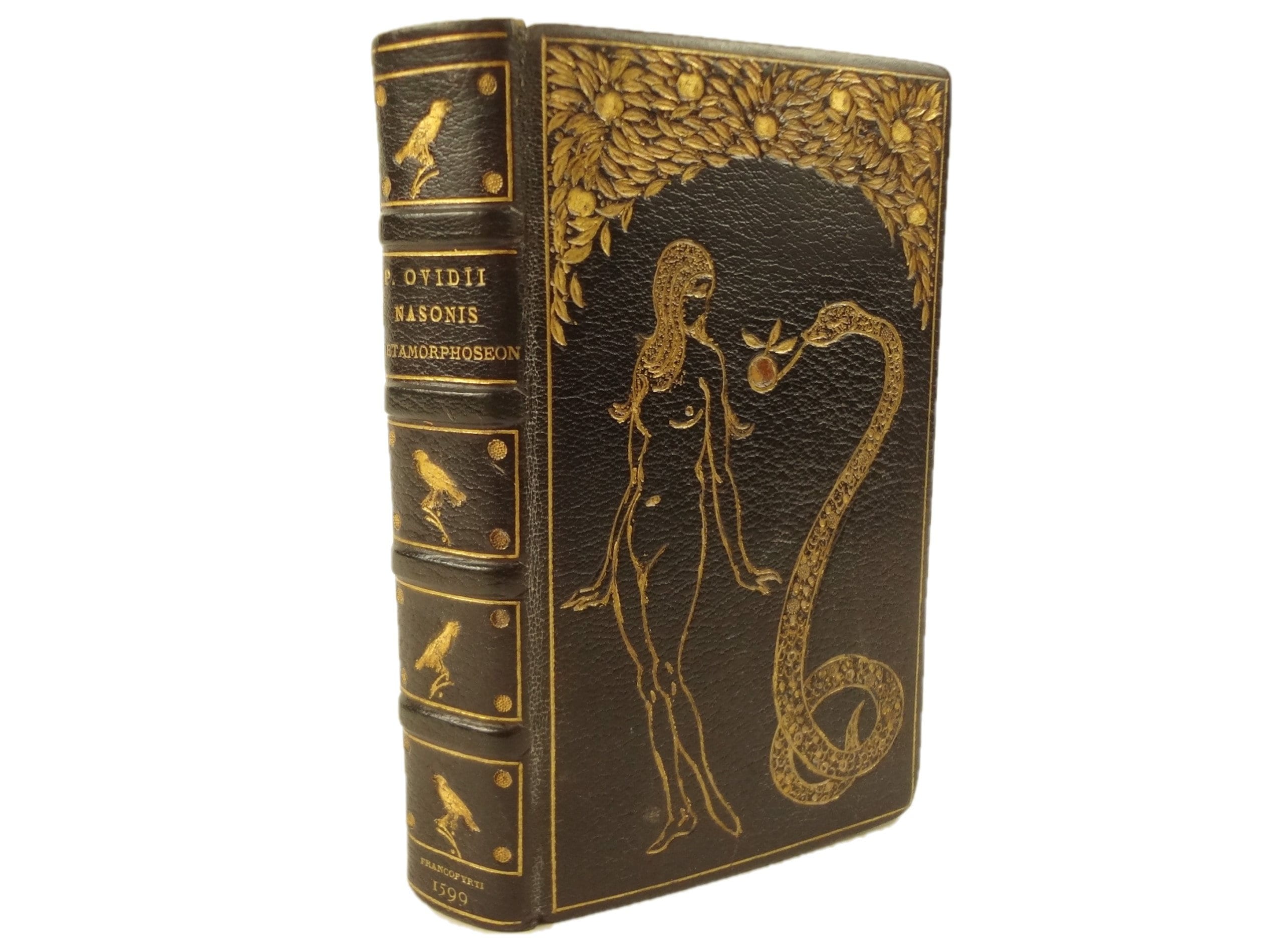 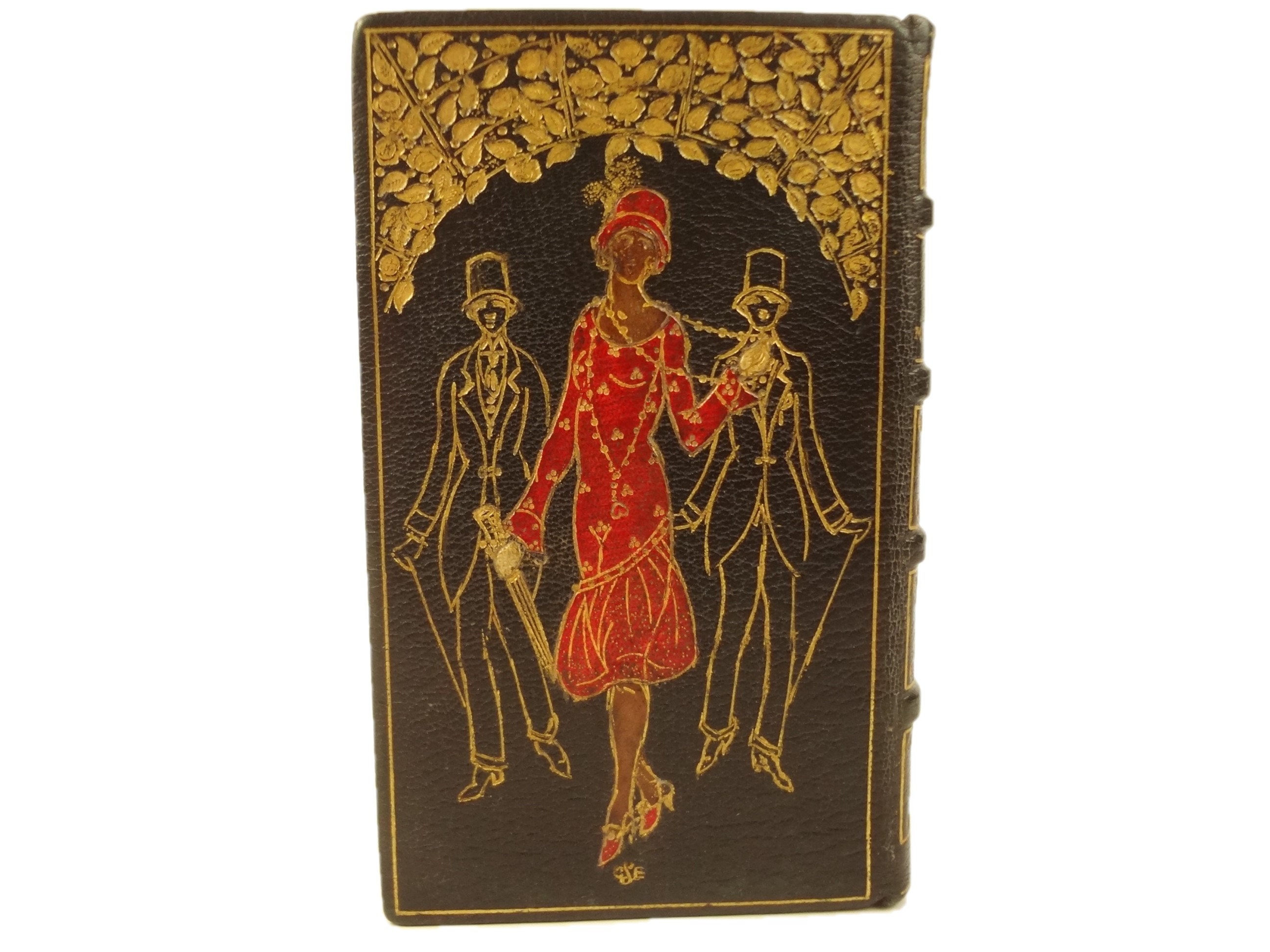 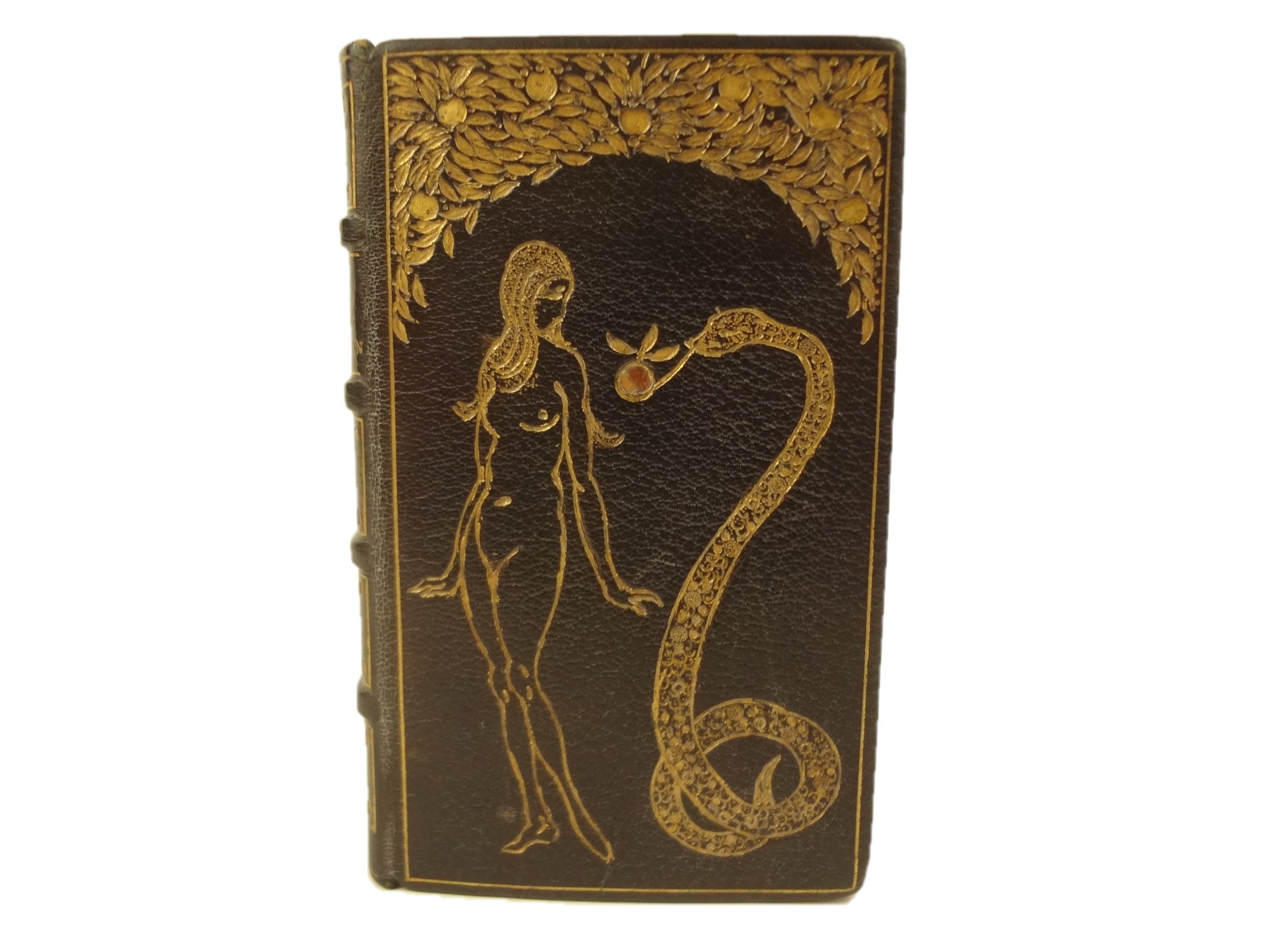 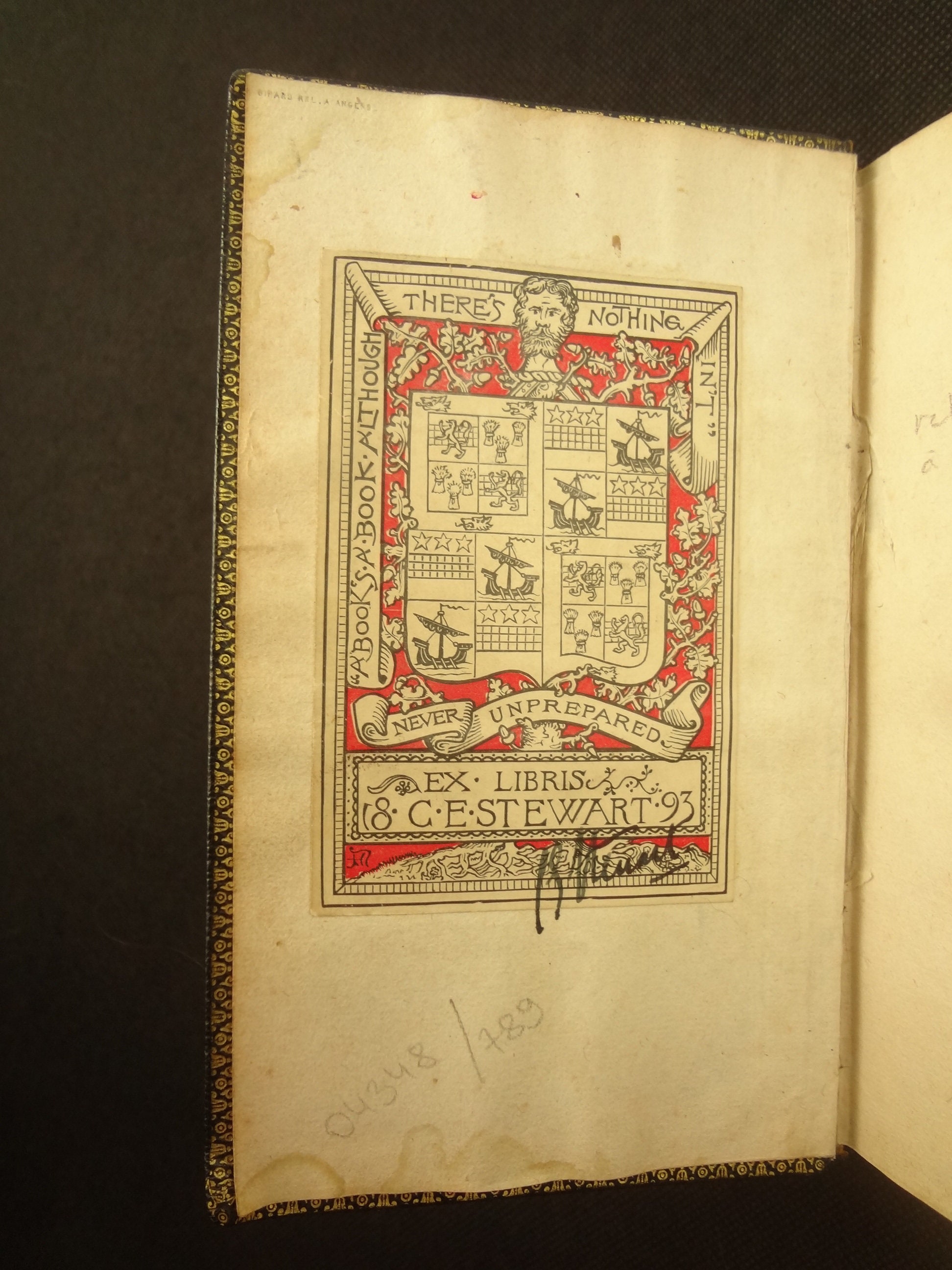 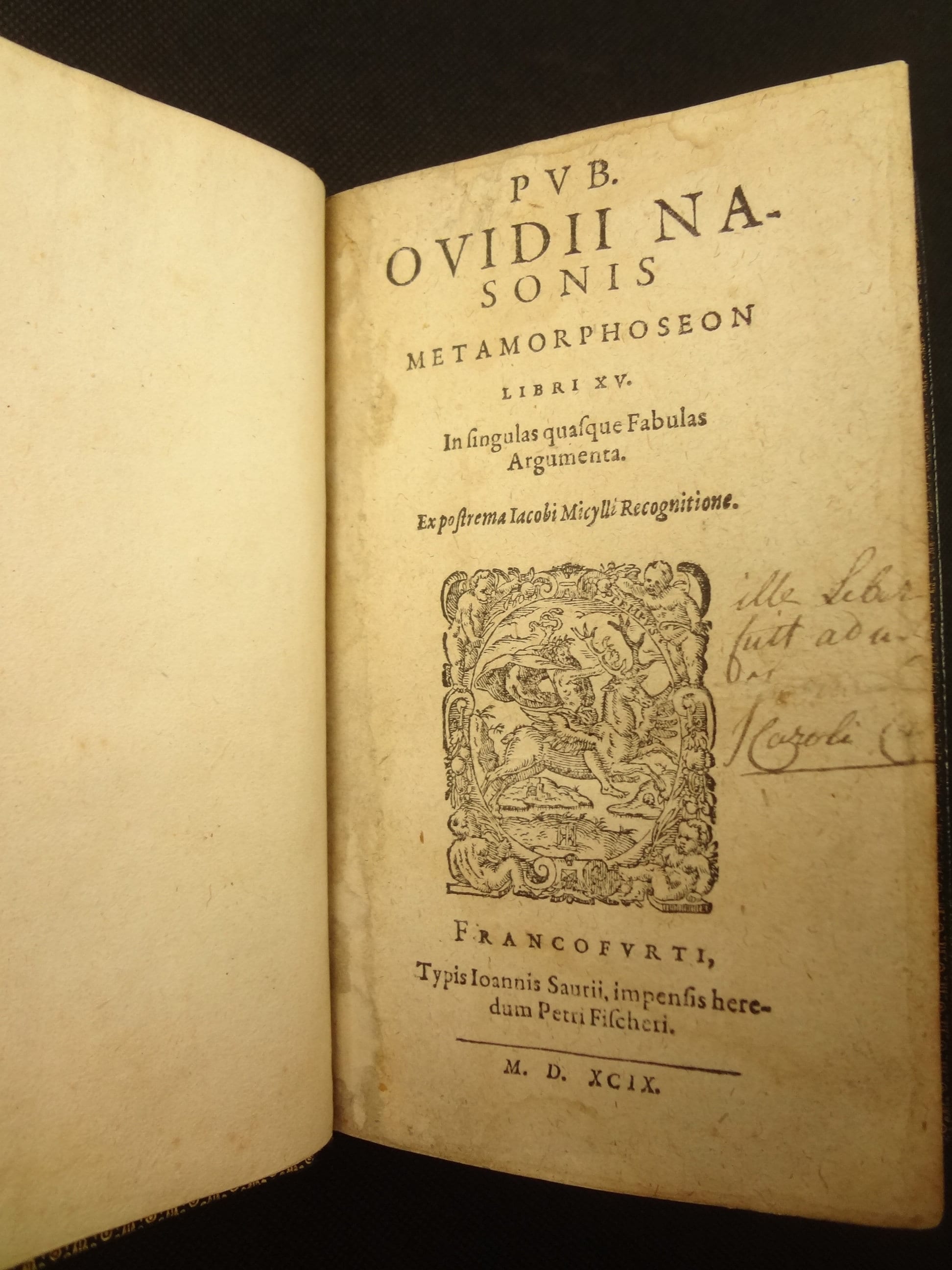 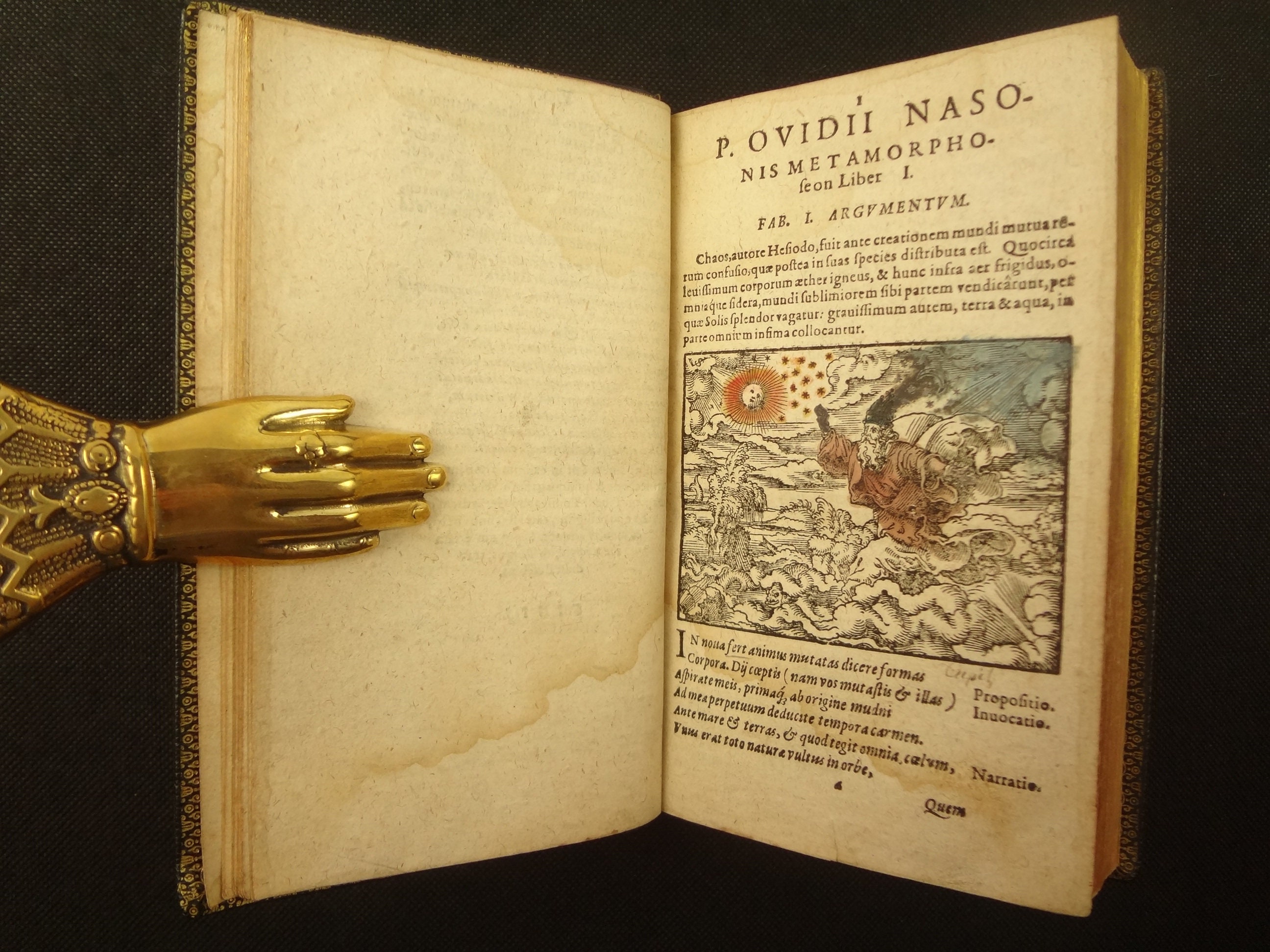 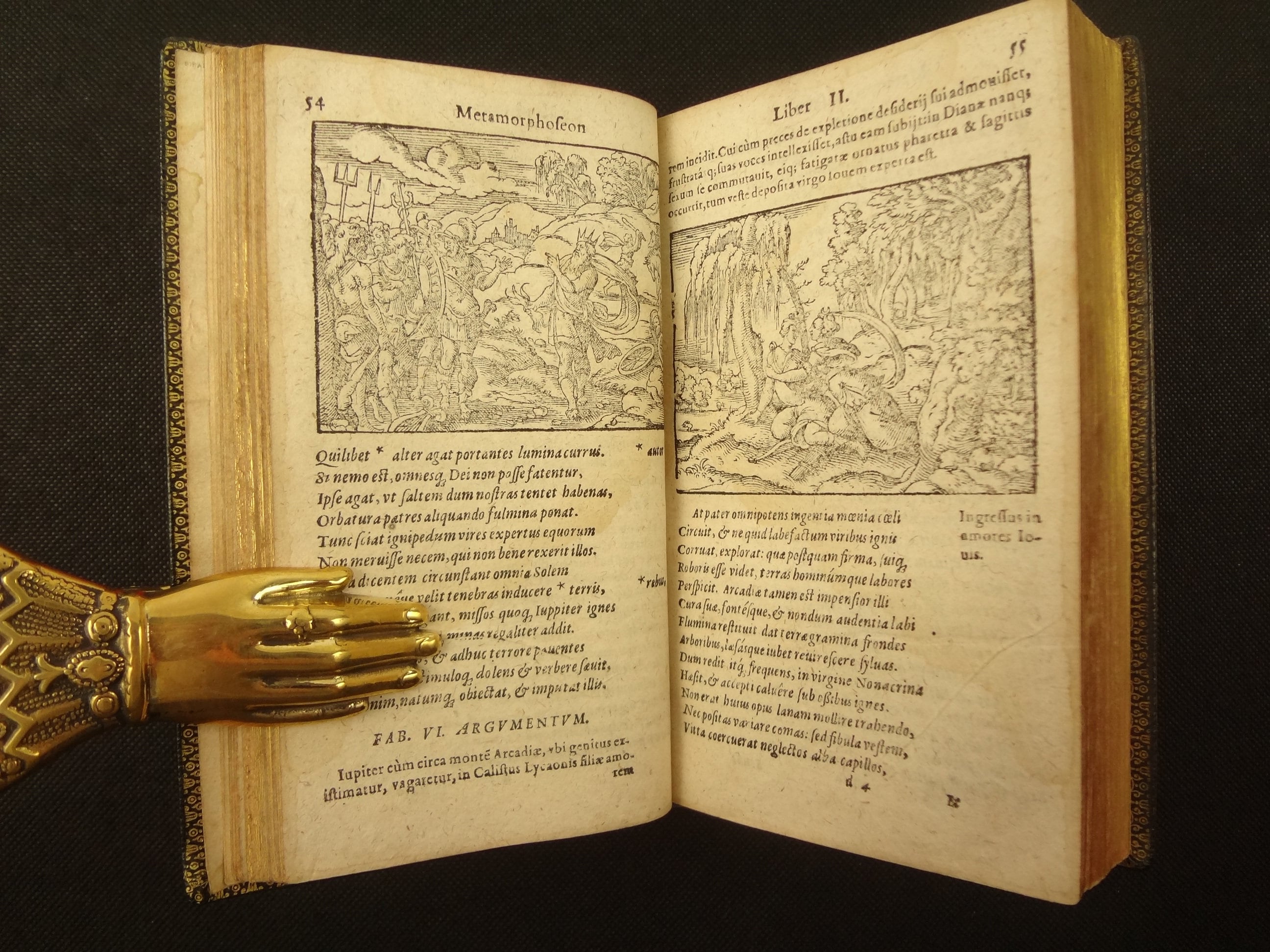 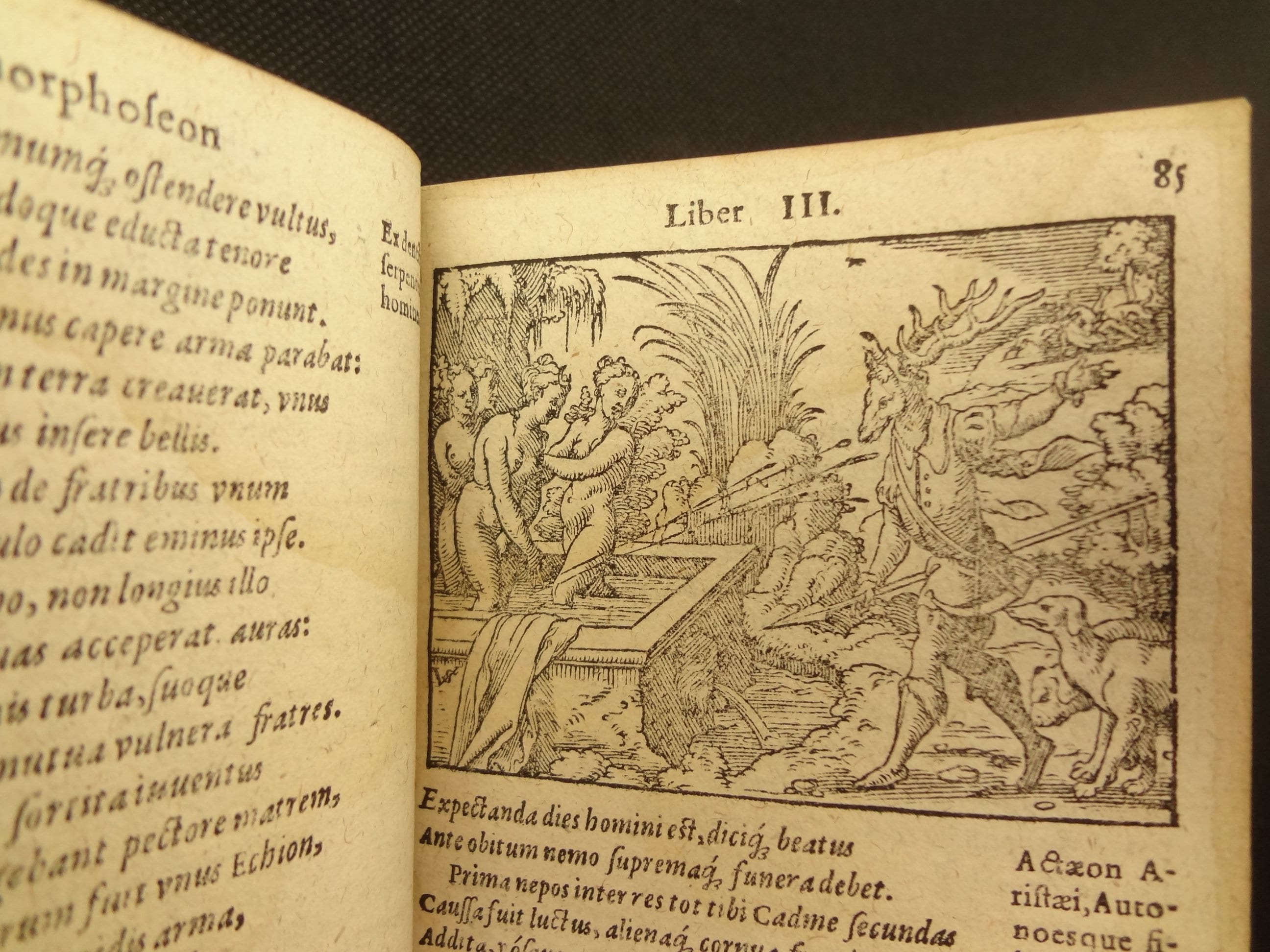 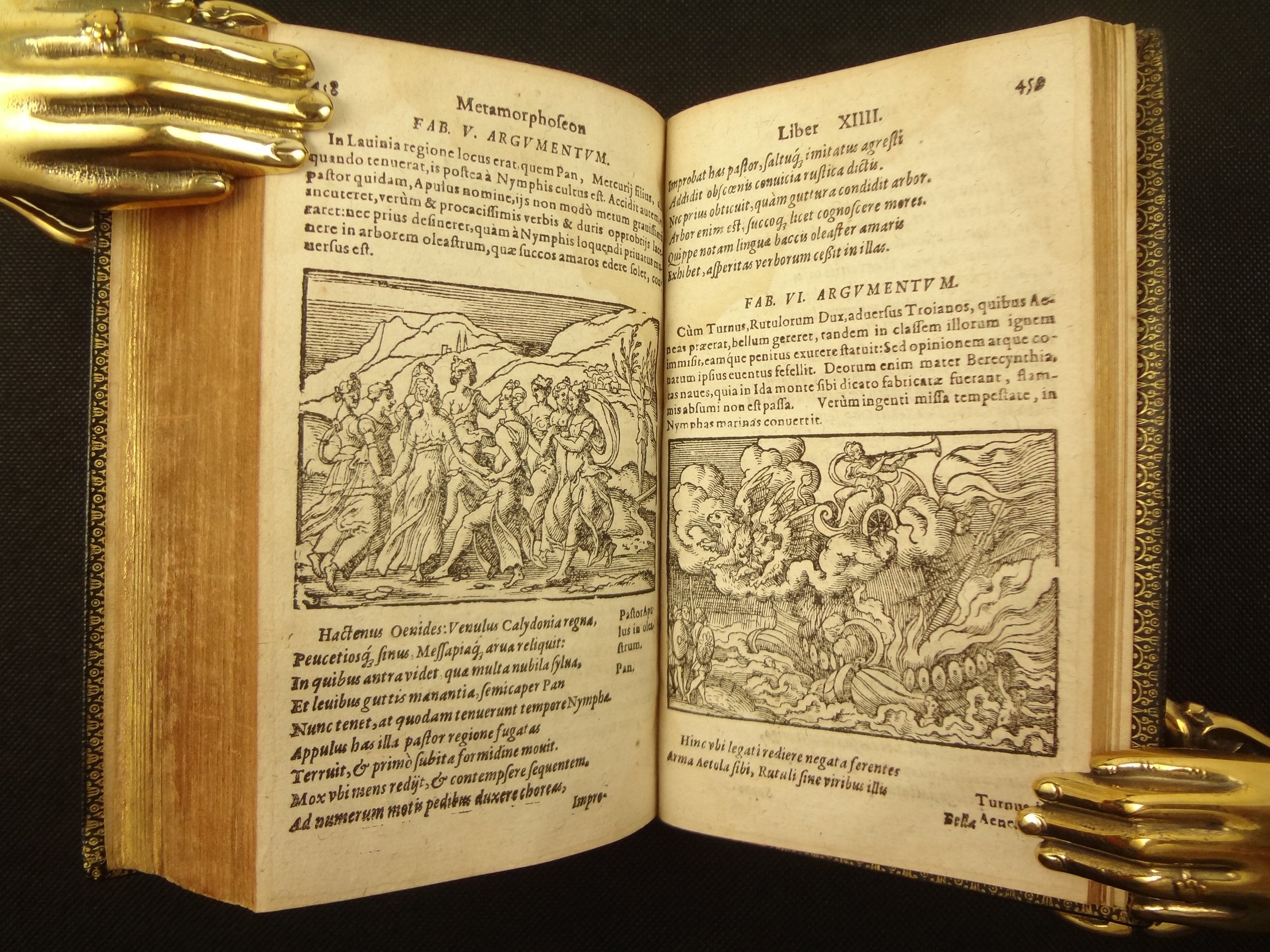 Beautifully bound, well-illustrated (by the venerable Virgil Solis' firm) 1599 edition of Ovid's Metamorphoses. The circa 1900 French binding is beautifully executed, and the first Solis woodcut has some (presumably) contemporary coloring. The ex libris plate of Charles Edward Stewart is found within; in Stewart's Ex Libris Society article, he reveals that he is of the Stewart (Stuart) family of nobility in the United Kingdom.

About Metamorphoses (in extreme brief) -

The Metamorphoses is an 8 AD Latin narrative poem by the Roman poet Ovid, considered his magnum opus. Comprising 11,995 lines, 15 books and over 250 myths, the poem chronicles the history of the world from its creation to the deification of Julius Caesar within a loose mythico-historical framework.

“The first edition of the Metamorphoses bearing Solis' cuts appeared in 1563, a year after the artist's death. It was published by the consortium of George Corvinus, Sigmund Feyerabend and the heirs of Wygand Galli. Solis designed 178 woodcuts in all for this version of the Metamorphoses. However, examining earlier illustrated editions of the work reveals that his designs are in fact close copies of those produced by the Lyonese artist Bernard Salomon for an edition printed by Jean de Tournes in 1557. Solis depicts exactly the same 178 fables as can be found in Salomon's edition. The resemblance between the cuts is obvious in comparing the illustrations. Solis's cuts are reversed and larger than the originals from which they were modelled.” – University of Glasgow, September 1999, Ovid: Metamorphoses Illustrated by Virgil Solis, Julie Coleman

The binding is stamped "Girard Rel. A. Angers" on a blank unpaginated endpaper; the Girard shop was a bookbinding shop in Angers France. This binding was produced specifically for Charles Edward Steward, as evidenced by his monogram on the rear board; this dates the binding to approximately 1900.

The first appearance of Solis' woodcuts was in 1563, but in a different format, with borders around the woodcuts and printed/laid out in an oblong shape. This is a later edition with a more standard 8vo format, which can be traced through other Frankfurt printings in the last half of the 16th century.

The Universal Short Title Catalogue (no. 688672) records eight copies in Germany and Austria, but most of them are in the State Library of Germany, who seem to double-count their copies. Worldcat adds Grinnel College, Ellis Library, Howe Library, Danish Union, Royal Danish, U of Kansas, and St. Pancras (OCLC 17428443, 465887071, 562277117, 312079836). Approximately a dozen copies in the world's libraries registered between OCLC and USTC.

This copy is missing its "Index Fabularum", which was found at the end of the work.

Measures approx. 16.2 x 10 x 3.2 cm. Black morocco fine binding with overlays (circa 1900). Front board with gilt leafy apple tree at top, with Eve and the snake conversing below. Rear board with gilt rose flowers and leaves at top, with three ladies in French fashion, one with overlays of red and flesh. Spine with four raised bands; four compartments with central birds in gilt, and one with the author and title in gilt, "Francofurti 1599" in gilt at base of spine. All edges gilt. Marbled endpapers. Printer's mark on title page. Illustrated throughout by Virgil Solis (178 woodcuts). Missing the index of fables at the rear.