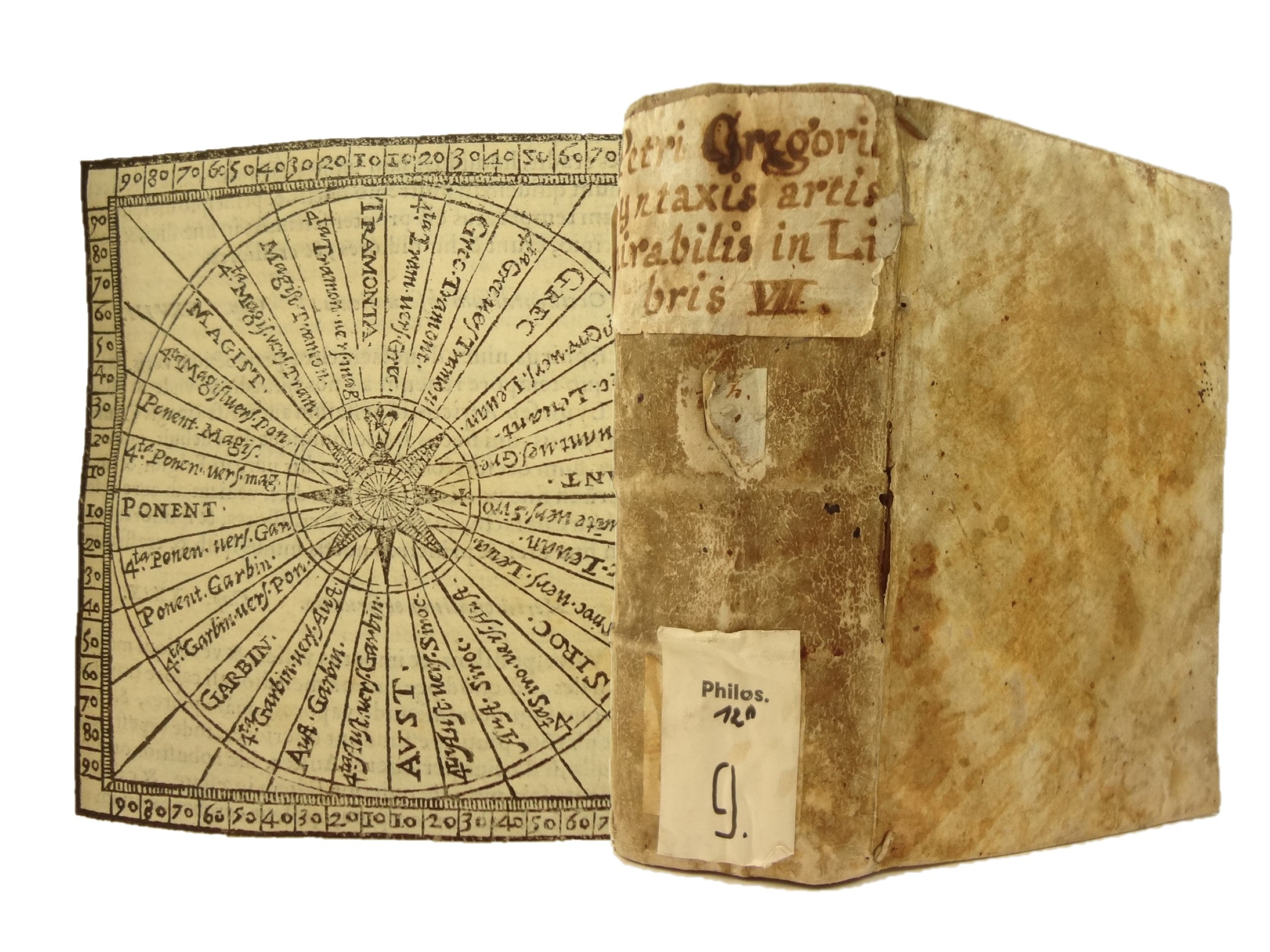 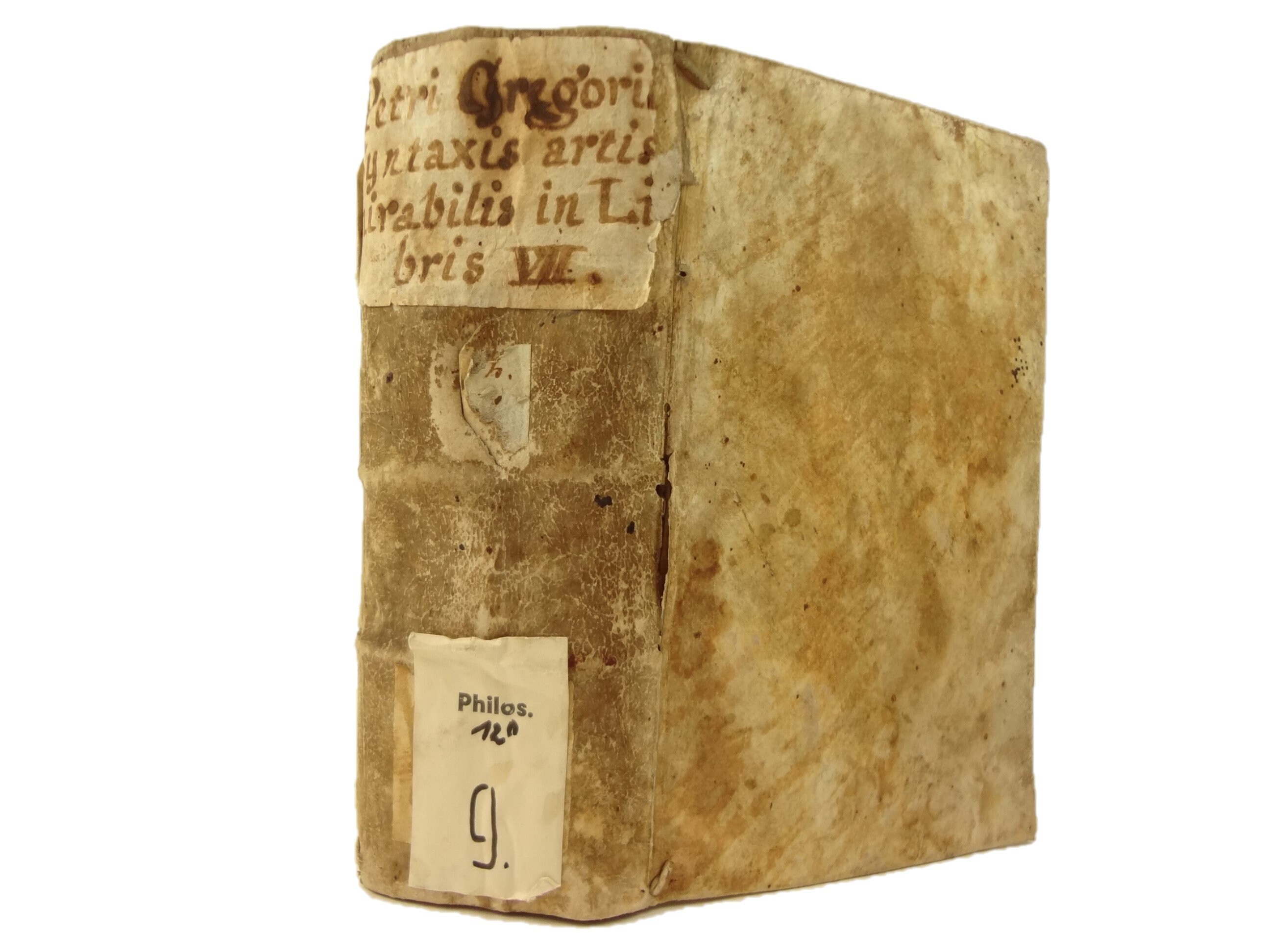 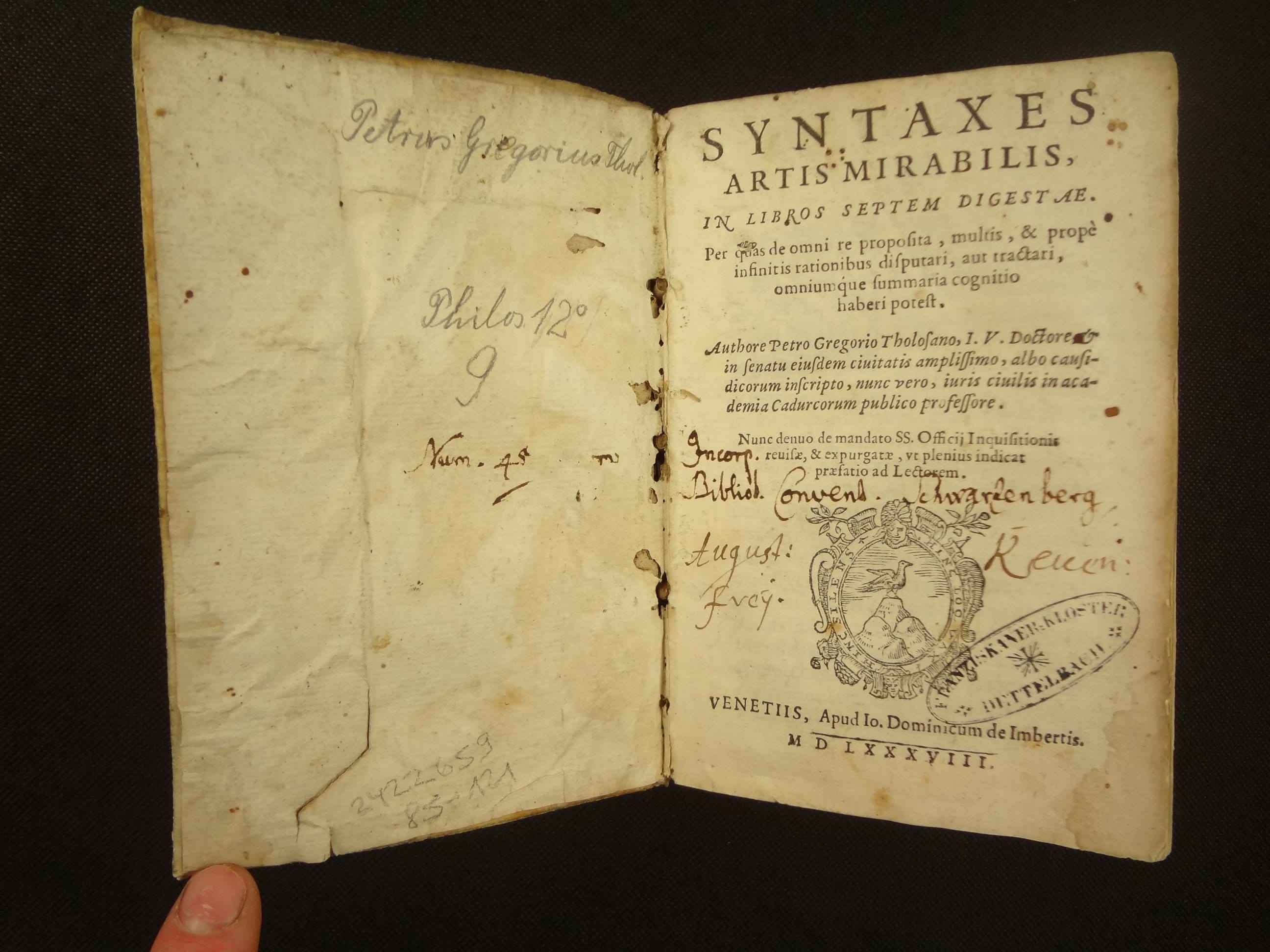 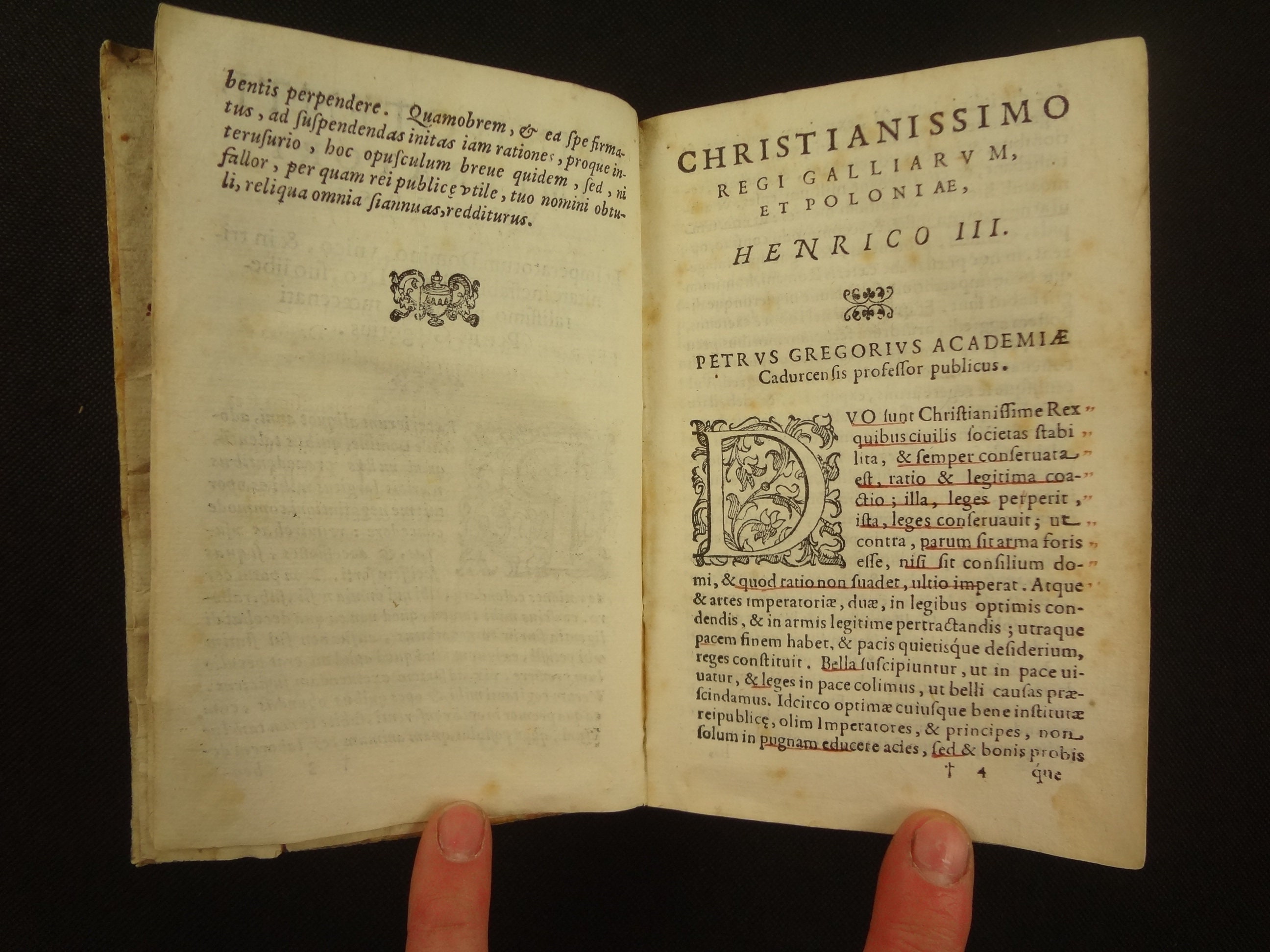 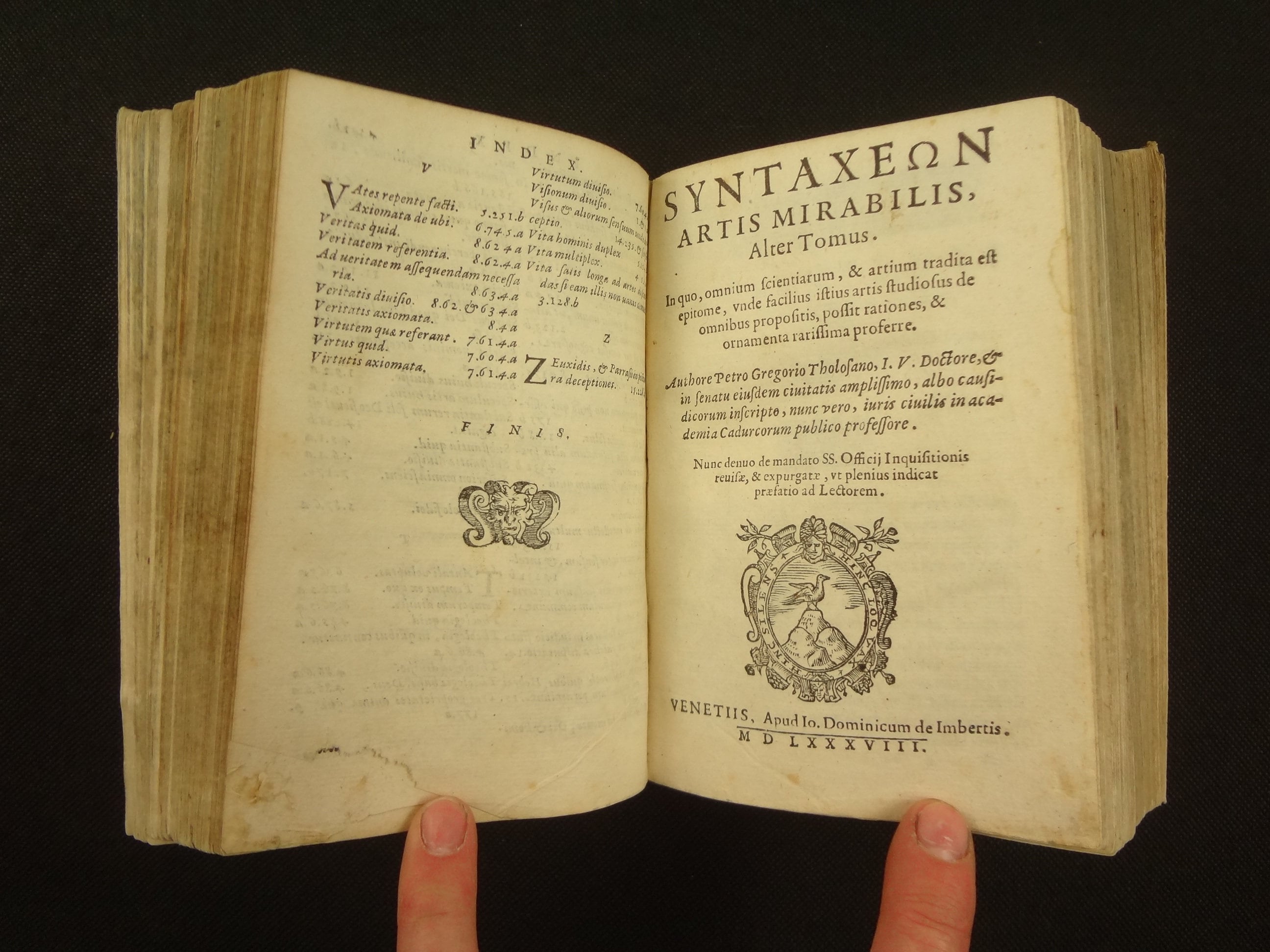 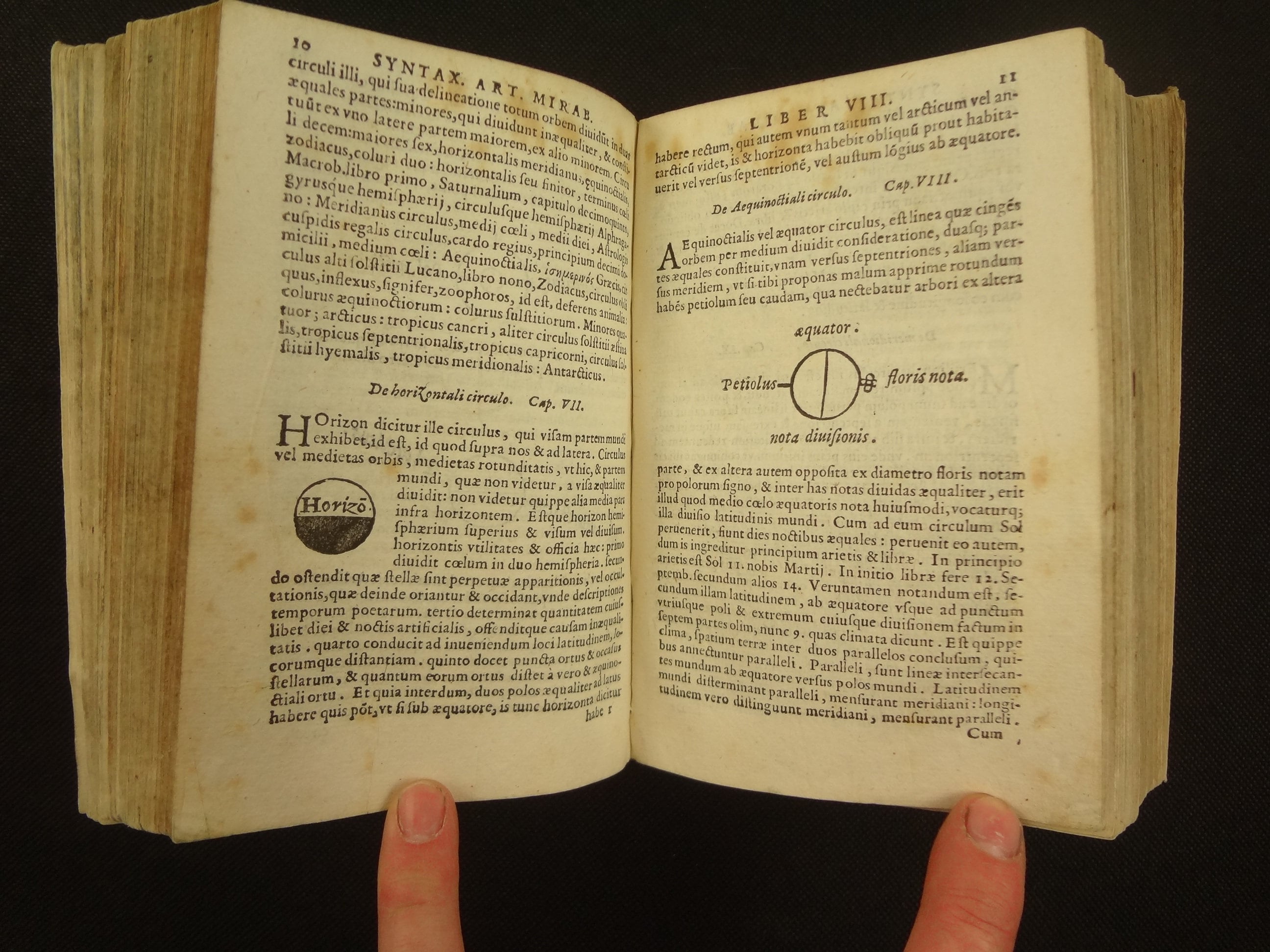 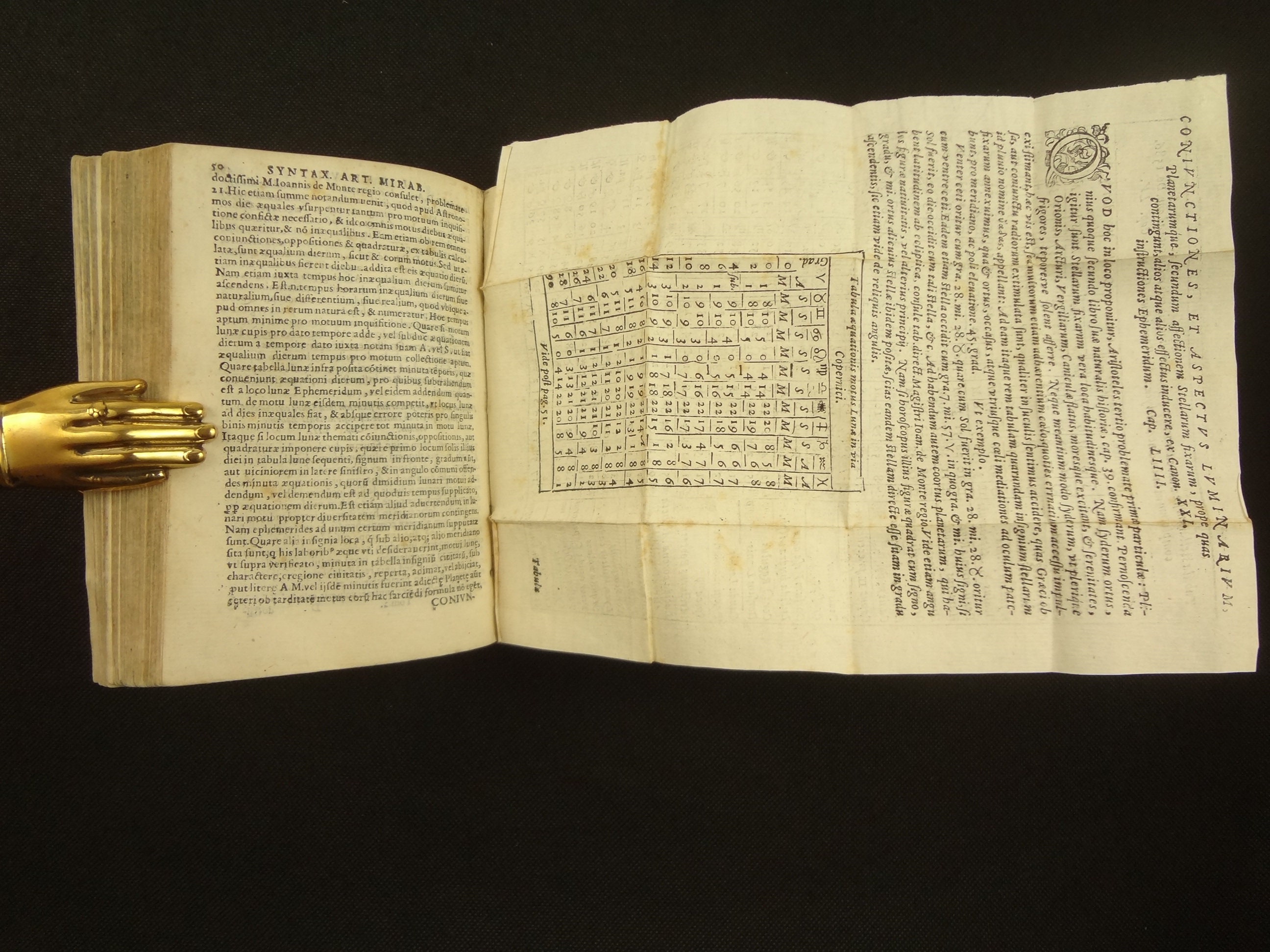 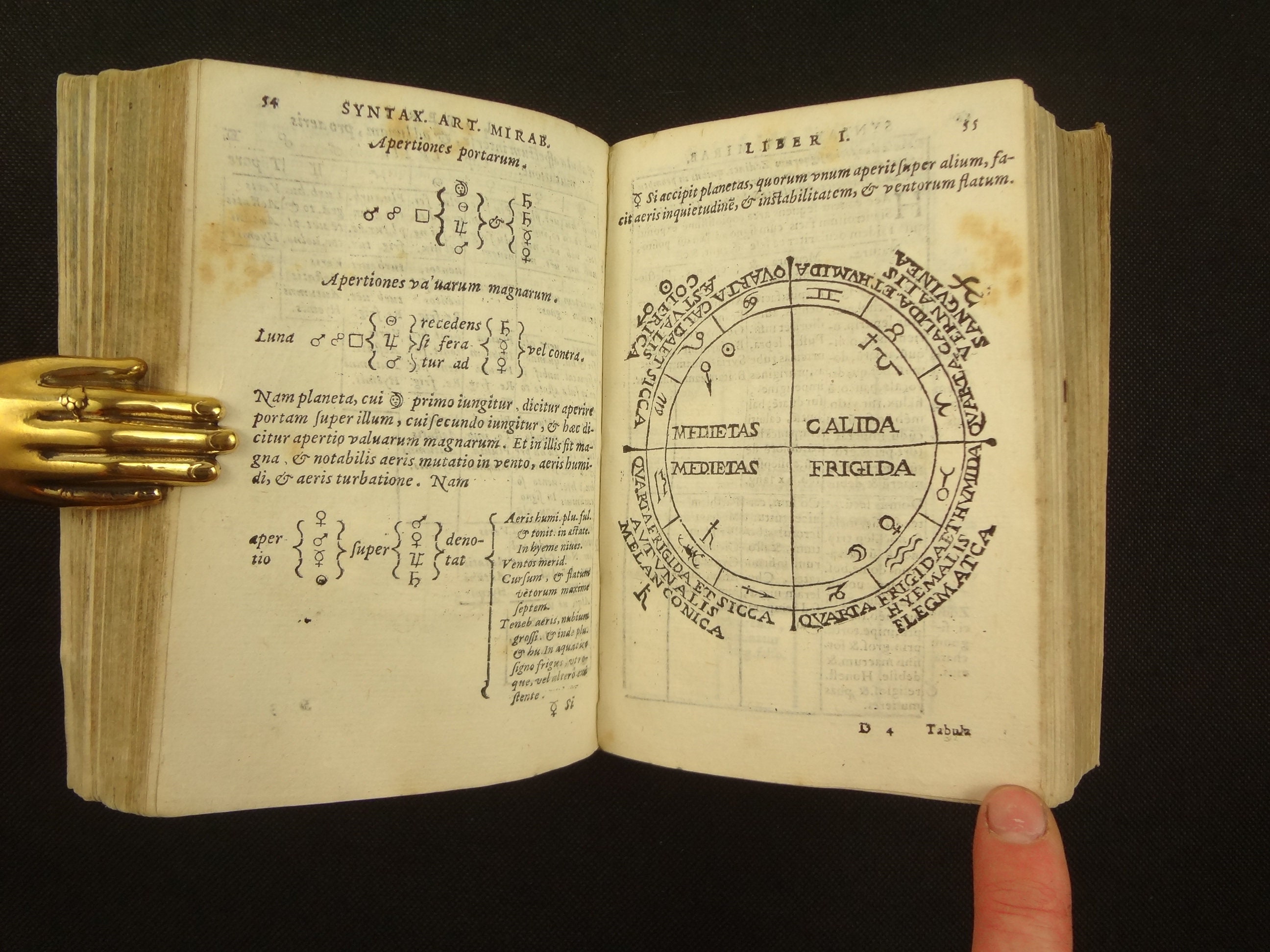 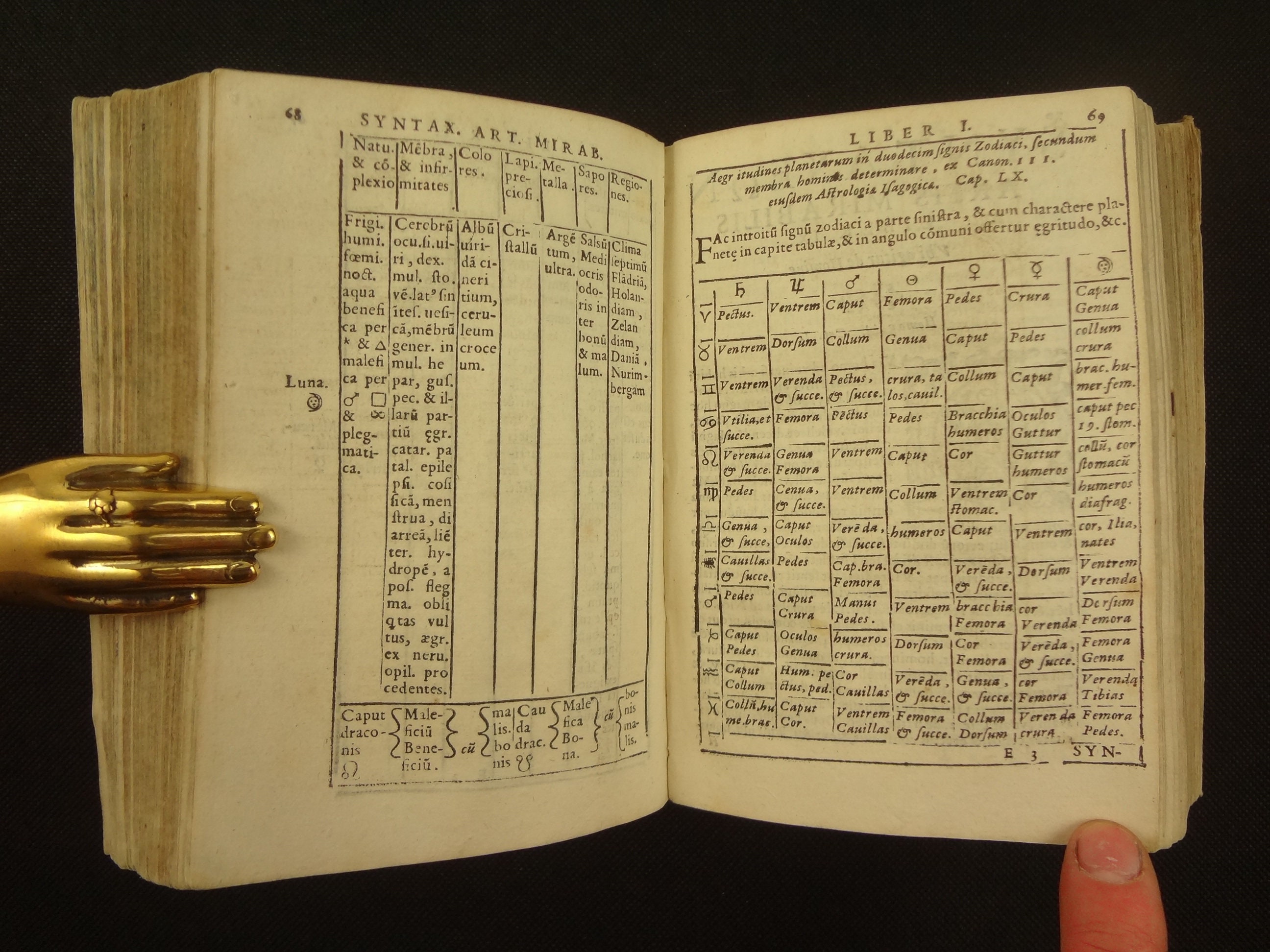 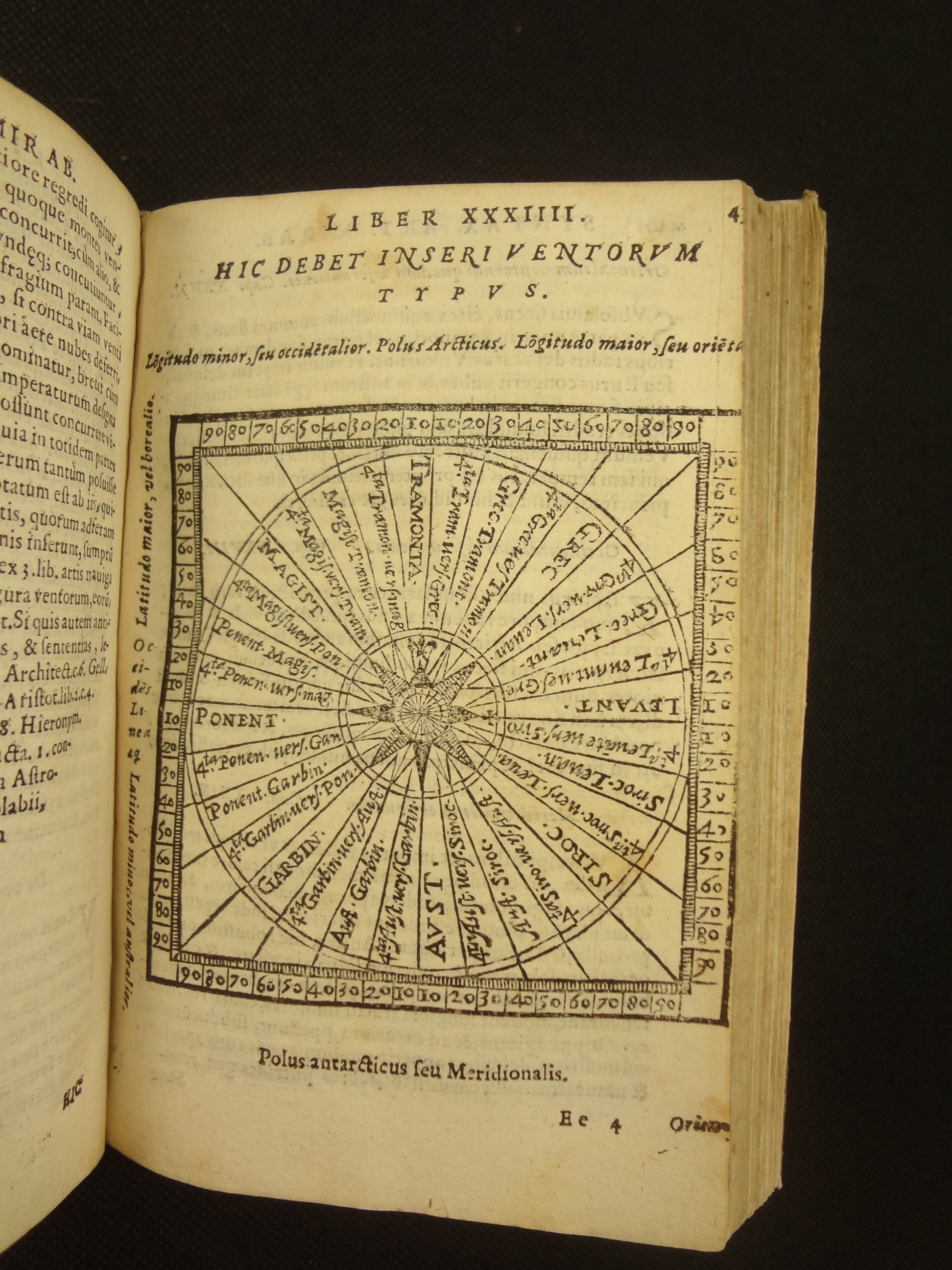 16th century "veritable encyclopedia of science" (French wikipedia), Syntaxes Artis Mirabilis, by Pierre Gregoire, which included some "magic" and astrology subjects, which put the book on the Catholic list of prohibited (banned) books.

Gregoire stated, "Since, as Cicero affirms, there is nothing sweeter than knowing everything and examining everything, I have come to the conviction that the particular precepts of each science, distinct from each other, can be brought together in a unique and general art, thanks to which they can communicate with each other in a reciprocal way." - French Wikipedia

Grégoire was born to a poor Catholic family in Toulouse. He studied the law and made a career for himself as an influential and at times controversial Catholic jurist. He taught law at Cahors and Toulouse from 1566 until 1582 when his patron, Charles III of Lorraine, procured a professorship in civil and canon law for him at the university of Pont à Mousson. Here Grégoire found himself colleague to the Scottish jurist William Barclay, best known for his invention of the term ‘monarchomach’ and his political treatise De Regno et Regali Potestate (1600). Barclay and Grégoire jointly entered into a dispute with the Jesuit masters of the university, and Grégoire famously threatened to abandon Pont à Mousson altogether in protest at their governance. He was reintegrated into the law faculty in 1587 and remained there until his death.

This book spent time in several German Catholic libraries, despite once being on the index prohibitorum. The title page shows that the book resided in the library of a convent in Scharzenberg, and also in the "Kloster" at Dettelbach. Dettelbach was probably the later owner, I see that the Franciscan Monastery at Dettelbach was dissolved in 2017.

See pictures. Vellum binding with the signs of centuries of use; numerous library labels on spine, some ink spots, occasional worm holes, a few annotations some cockling, a (tea?) stain on rear board, etc., moisture mark at fore-edge. Moisture mark in paper at bottom corner throughout, and an occasional mark from other edges. Pastedown with numerous library call numbers. No flyleaf. Some worming at pastedown and gutter. Some ink spots and annotations on title page. Library stamp on title page. One small hole on title page and following two leaves. Occasional annotations, underlining, ink spots, etc. throughout. Some thumbing, corner/page edge chips, occasional fox spot and other signs of an ex-library book. Bottom corner of 31 missing, no text affected. Corner of 1st book, last leaf missing, no text affected. Plates trimmed tight (like at 439). Moisture mark at top edge at last gathering. Rear colophon with some letters in an old hand. Rear pastedown with worming.