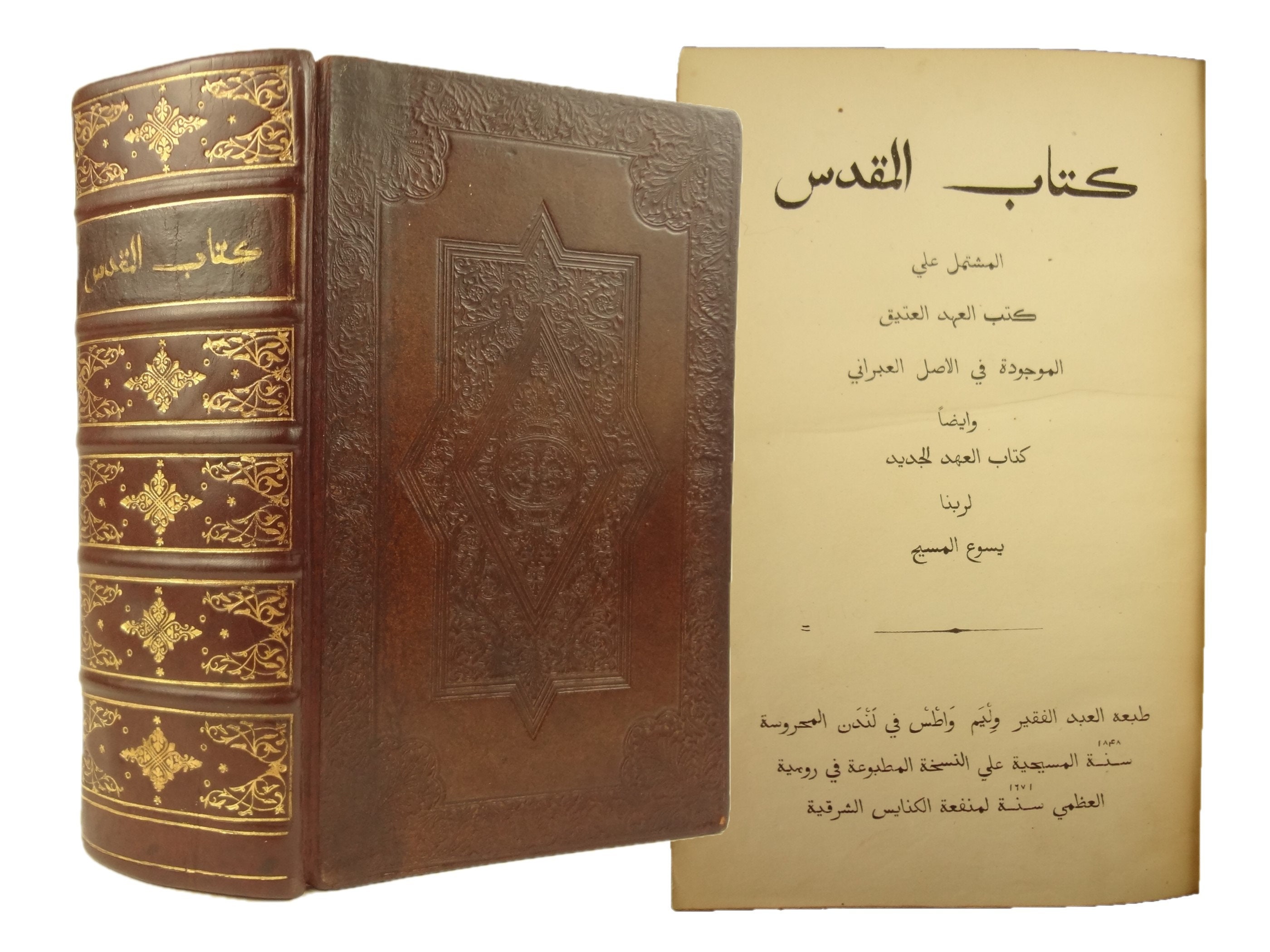 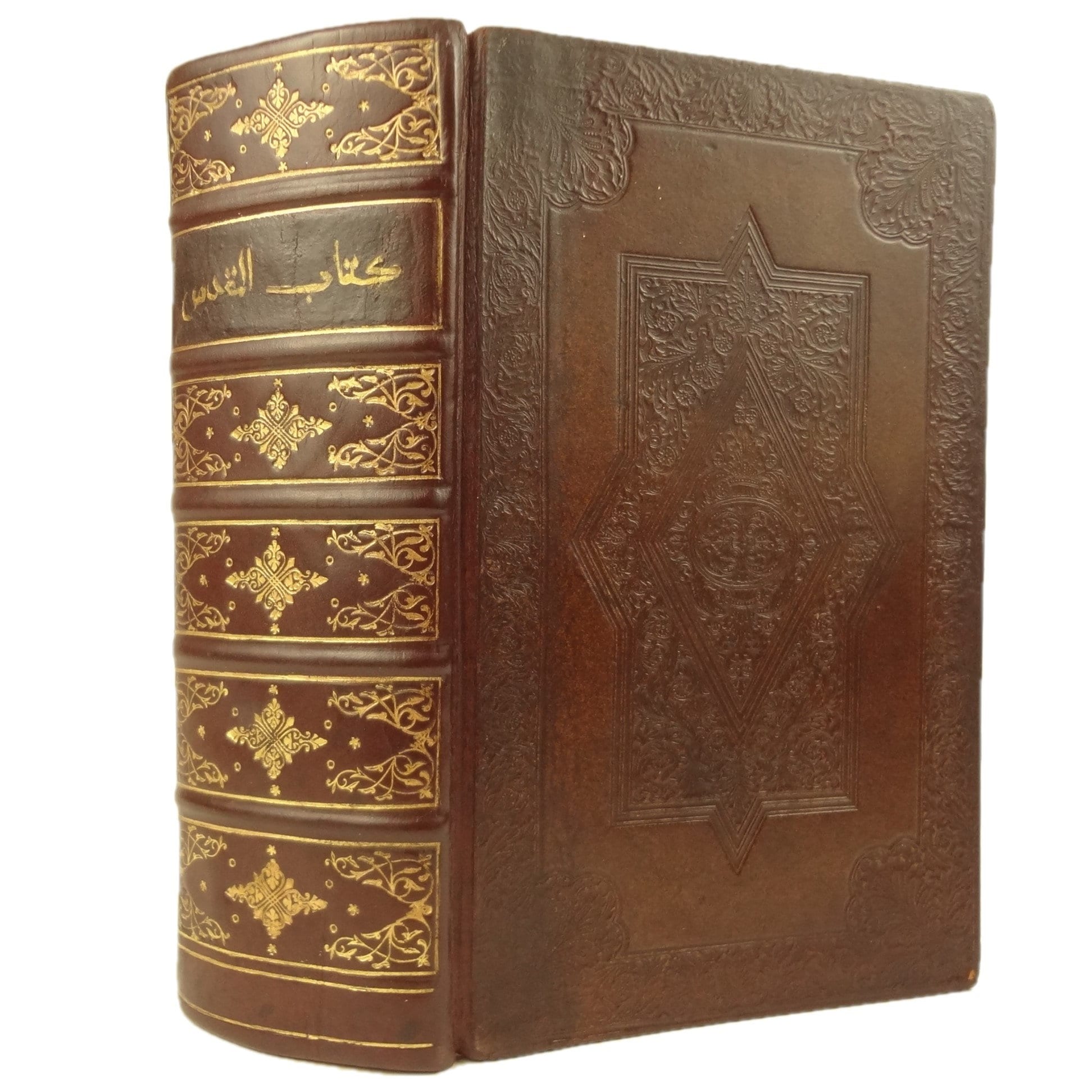 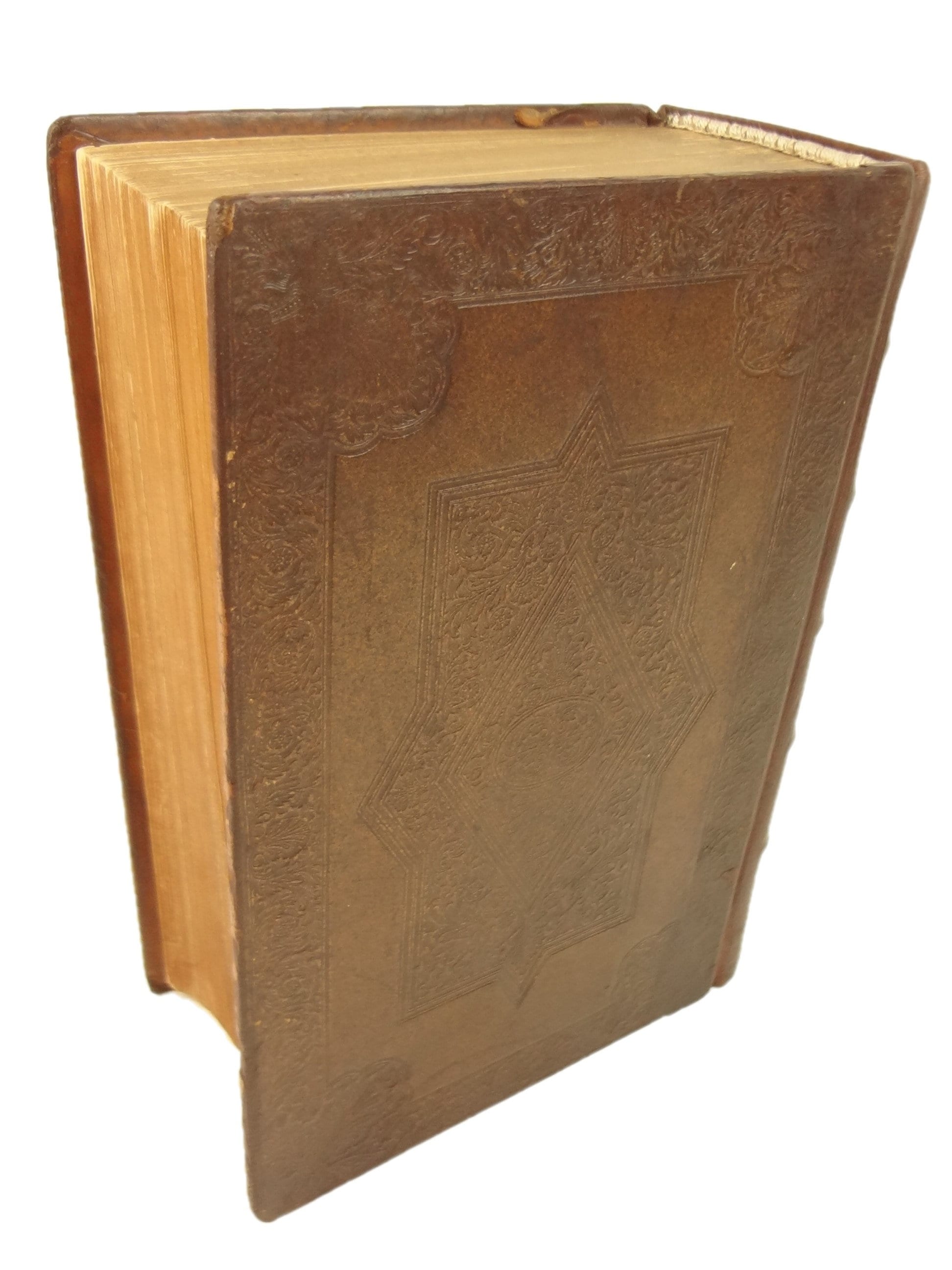 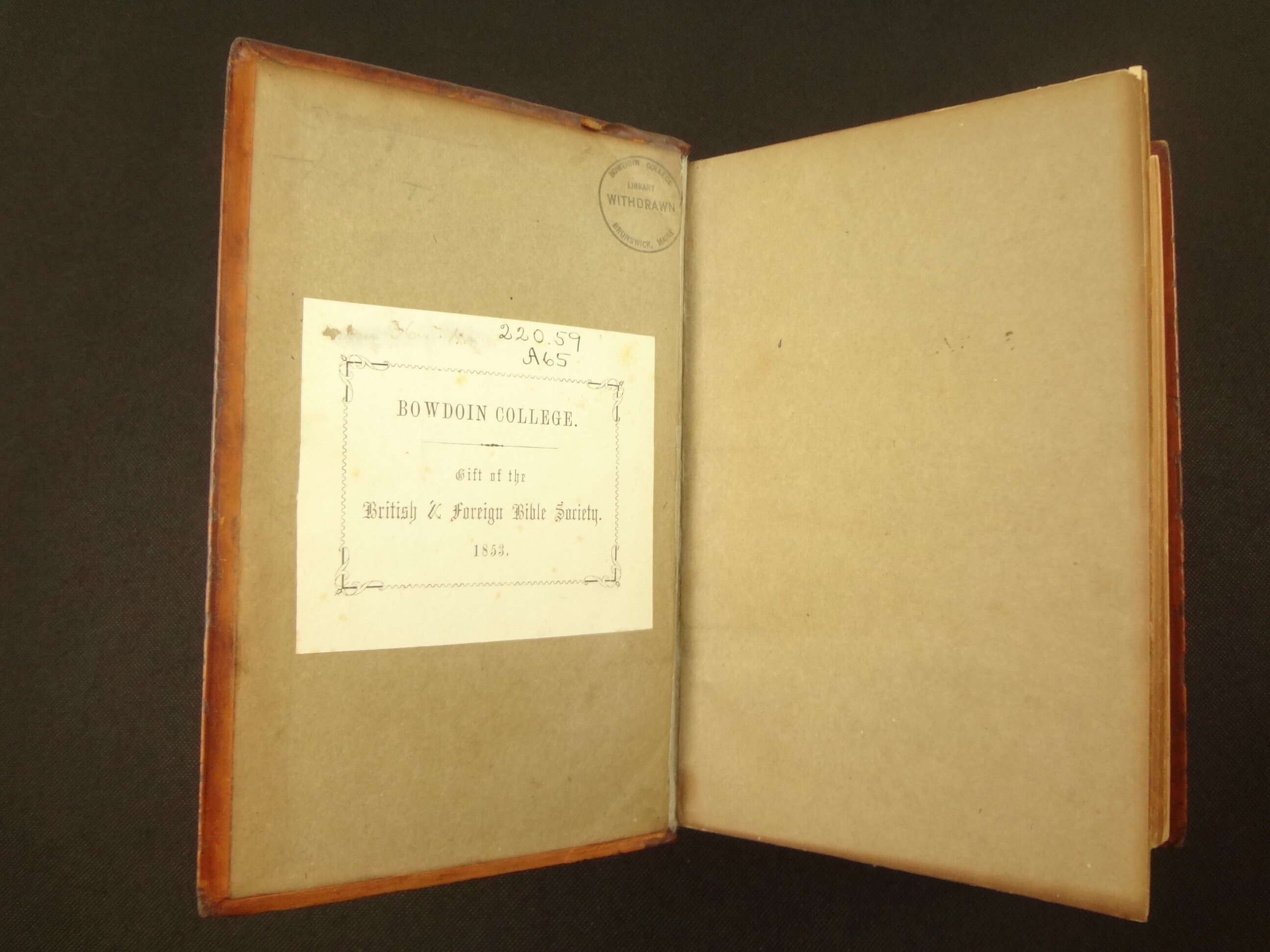 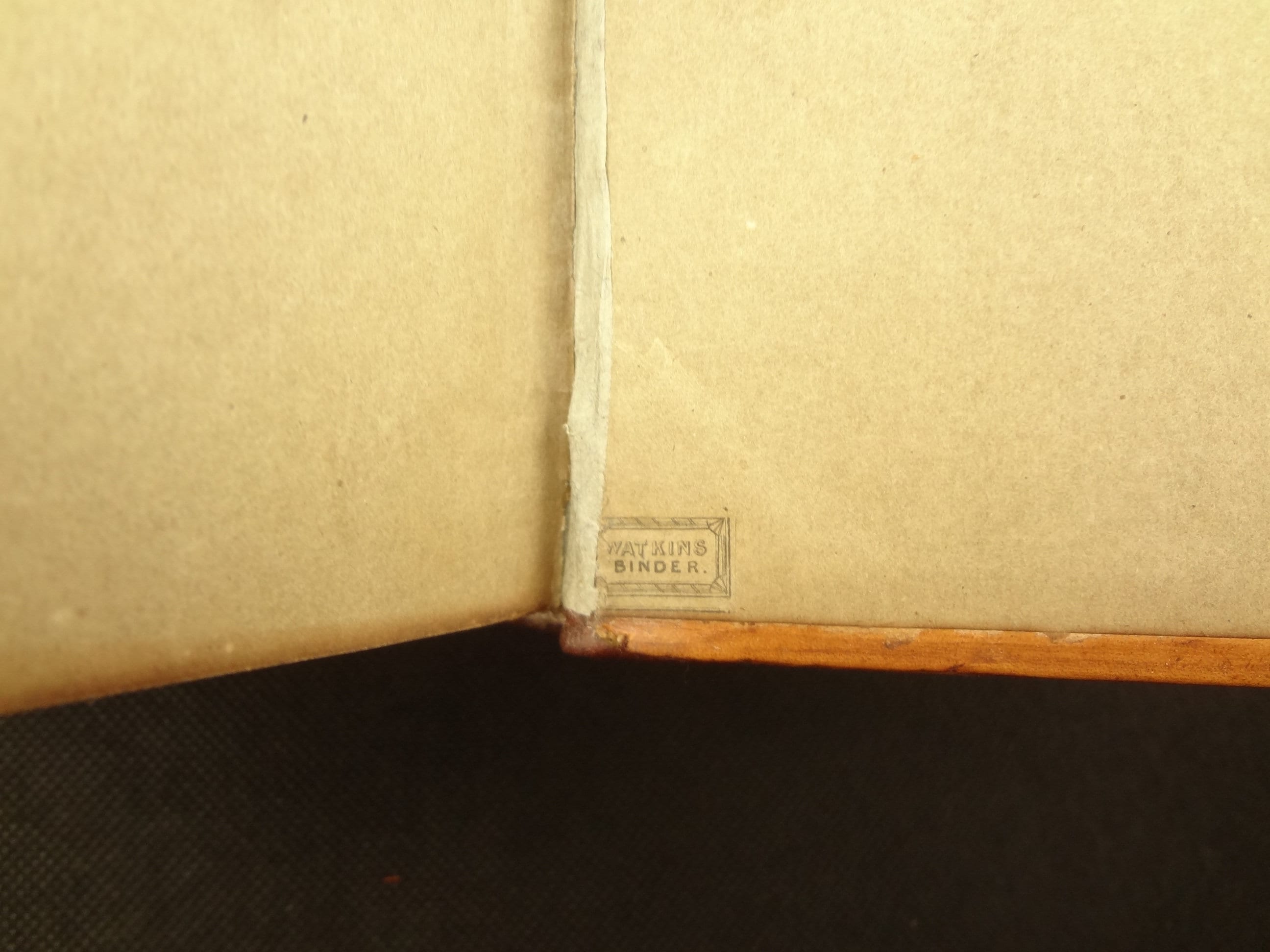 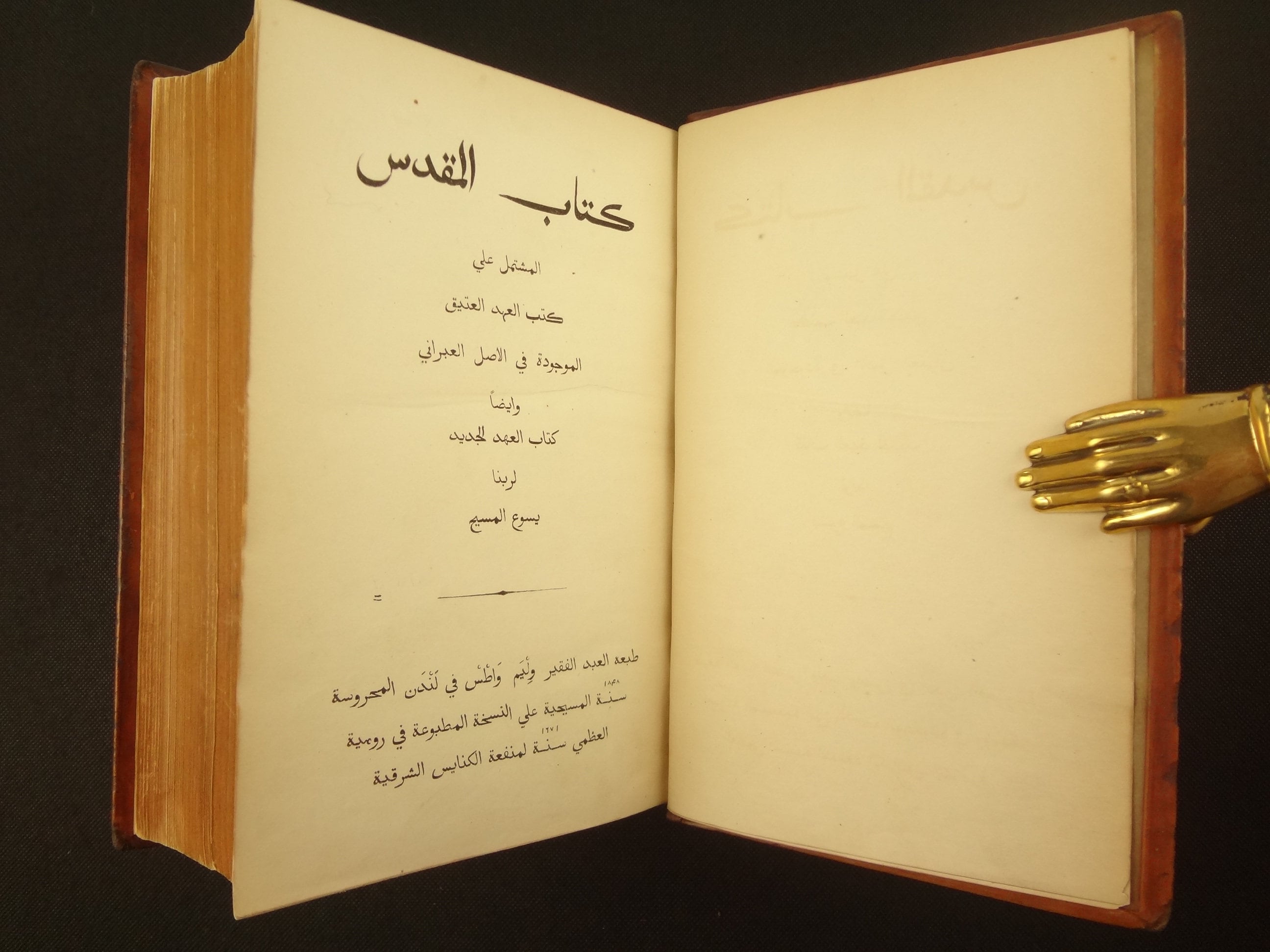 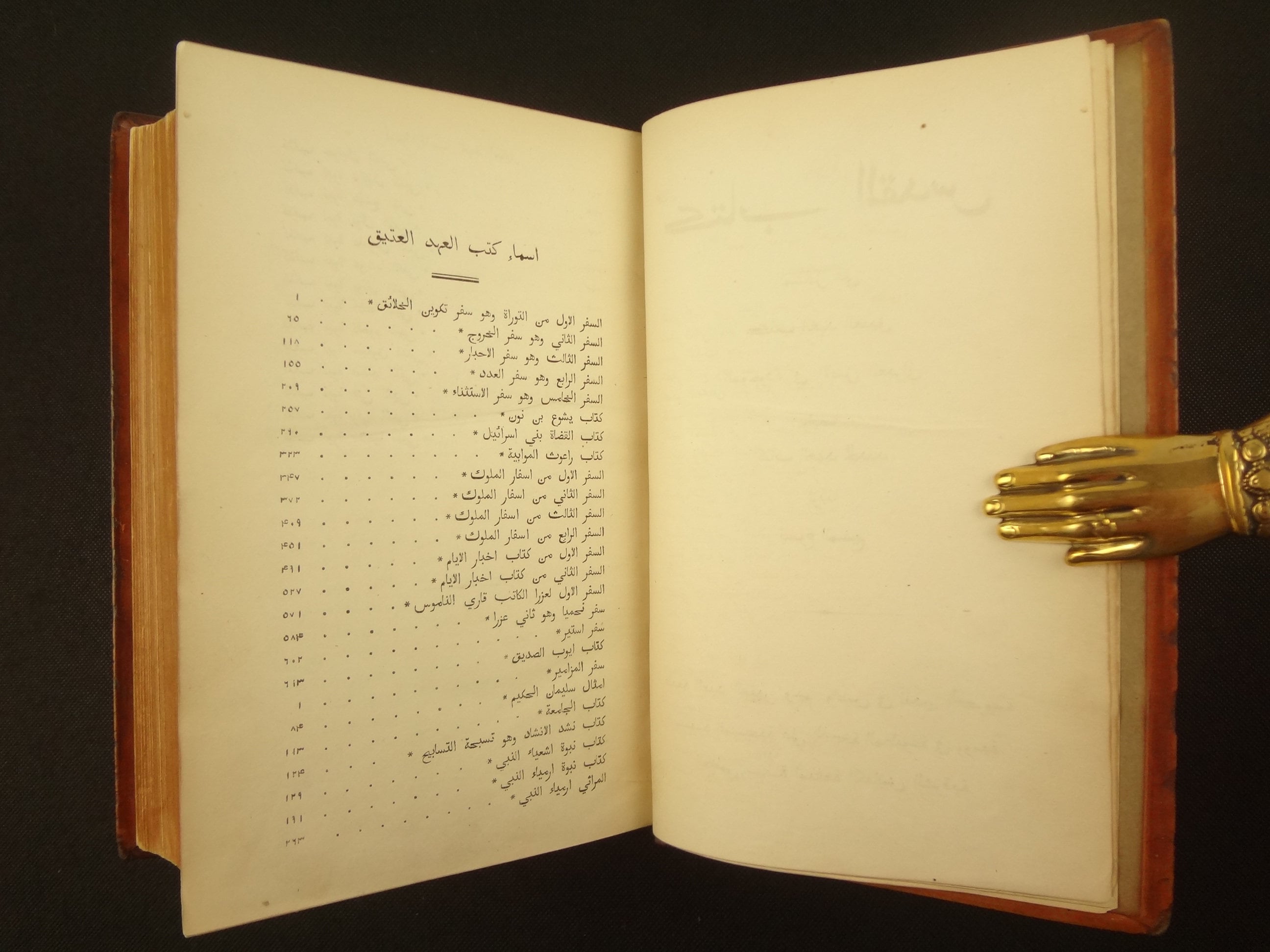 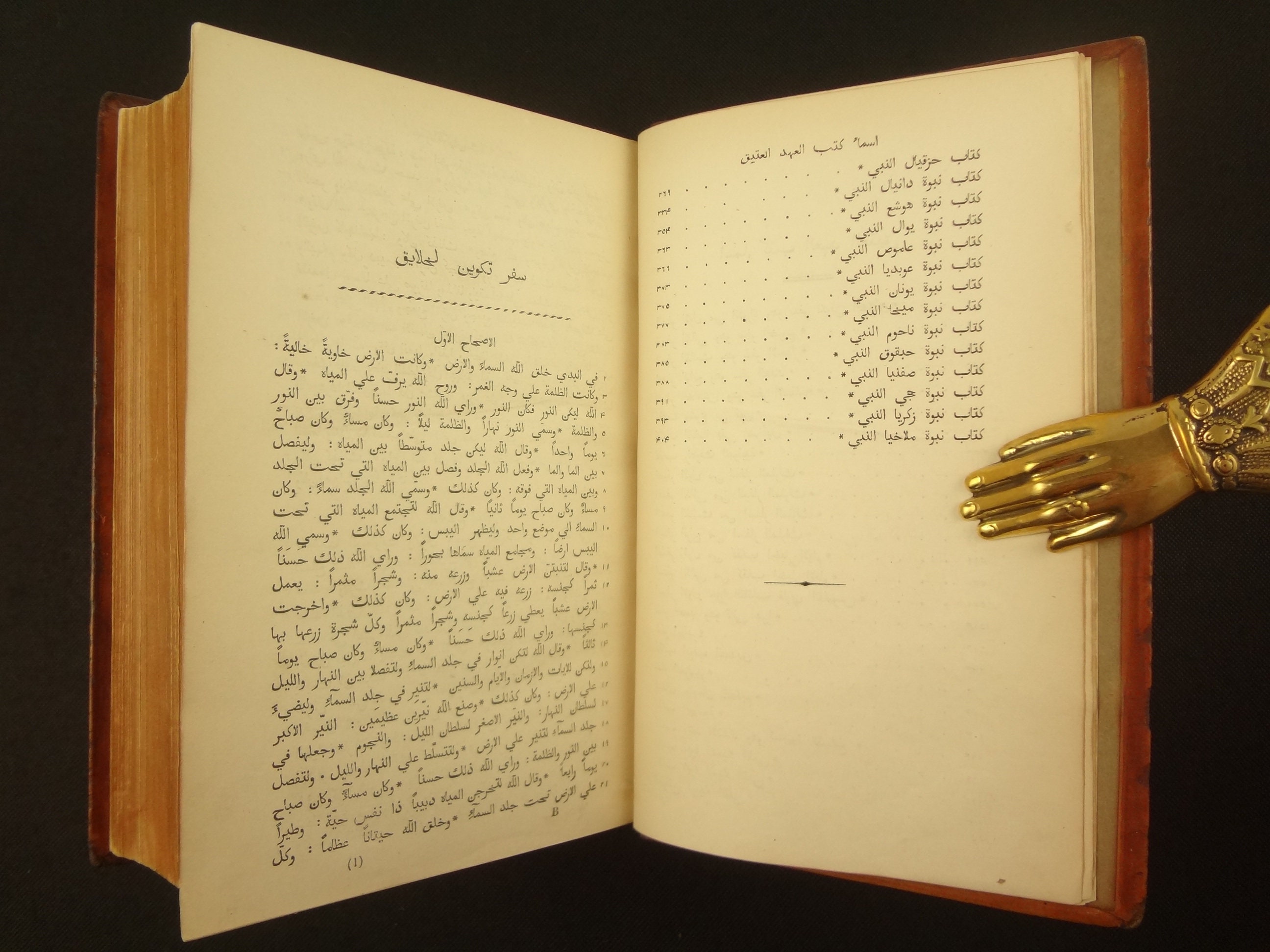 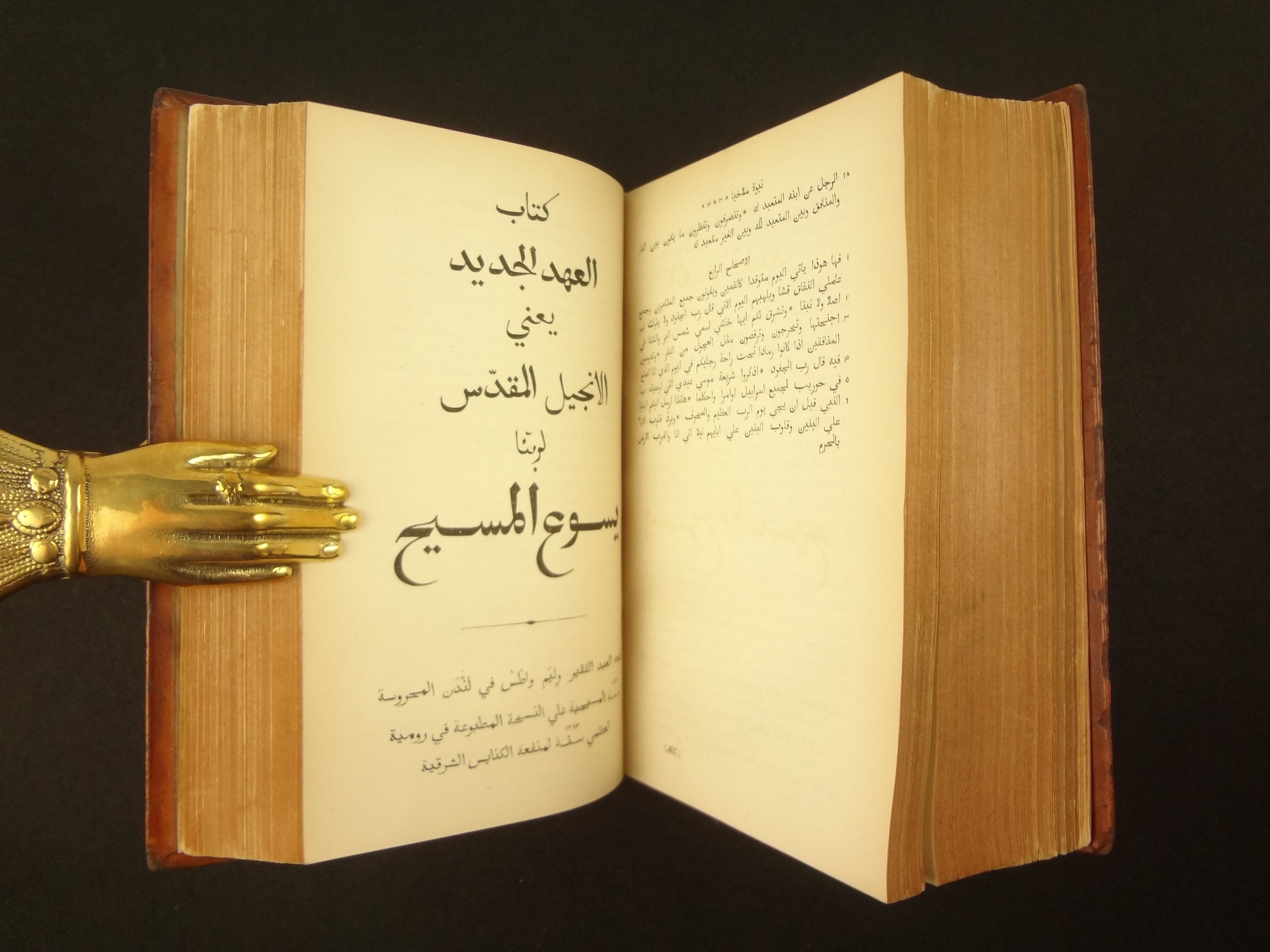 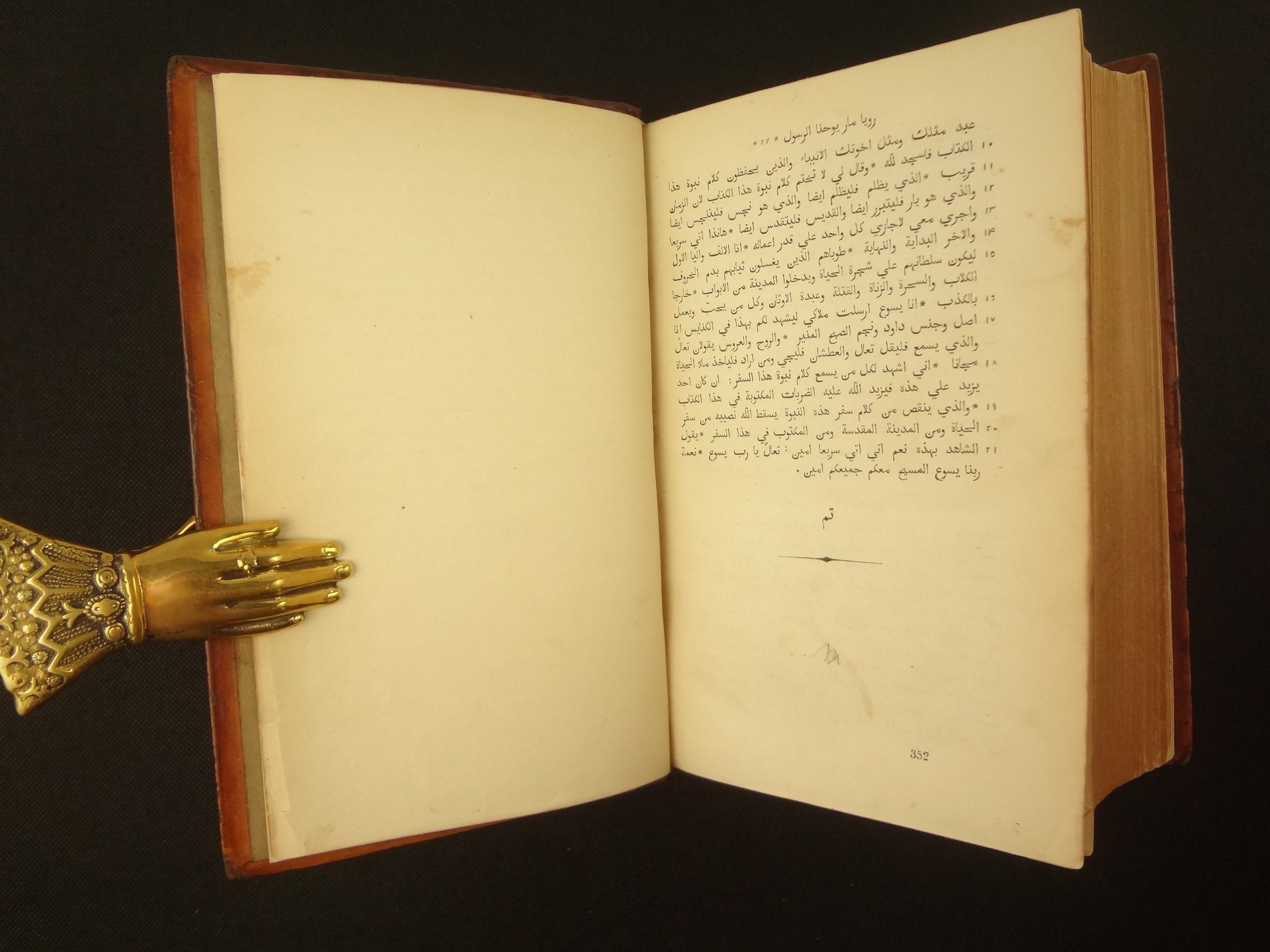 Rare, and beautifully bound, 1848 edition of the Holy Bible (Old and New Testaments) printed in Arabic.

This is a rare edition, OCLC recording no copies in the world's libraries. This Bible's background, development and printing history are notable.

Per the title pages, the text was taken from the 1671 Biblia Sacra Arabica (the first complete edition of the Arabic Bible; referred to as the Propoganda Bible, because it was produced by the Congregationis de Propoganda Fide in Rome).

The Catalogue of Arabic Printed Books in the British Museum (p. 364, 1894) notes that for this edition the 1671 text was edited by Samuel Lee and John David Macbride.

"Professor Samuel Lee (1783-1852) of Queens' College, Cambridge, the Evangelicals also drew on the resources of the Company's college at Haileybury for their proselytizing purposes. For Lee occasionally visited the East India College from Cambridge (whence it was well-connected by coach) to visit his linguistic helper on his Persian Bible, the Indian munshi at the college Mirza Khalil (who apparently remained a Shiite Muslim). In his translations of the Gospel into Persian and Arabic, Lee also seems to have drawn on the linguistic expertise of an Iranian scholar, Mirza Salih Shirazi, who studied in England between 1815 and 1819 and recorded his meetings with Lee in his Persian diary. Their collaboration was of mutual benefit, for Mirza Salih in turn drew on the skills of Lee's principal English collaborator, the printer and type-founder Richard Watts, to learn the art of printing for himself during a six month apprenticeship at his workshop."

Lee collaborated with "John David Macbride (1778-1868), Lord Almoner's Professor of Arabic at Oxfords. In 1819 Macbride had guided an Arabic Psalter (itself based on an earlier edition printed in Mount Lebanon) through publication by the BFBS, again through the services of Richard Watts.” - The Development of Arabic-script Typography in Georgian Britain, Nile Green, Printing History, Issue 5, 2009

A rare printing, Worldcat finds no 1848 editions in the world's libraries. That being said, there is an entry in Worldcat without an associated book at a library. OCLC #47944799

The title page identifies the printer as William Watts. William inherited the type-set for the Arabic Bible from his father, Richard Watts. An 1831 edition of Richard Watts' Bible is scanned to Google Books, and it is the same layout and text. See the scanned "1831 Kitāb al-muqaddas ilakh" on Google Books.

It's clear that the printings Darlow and Moule (Historical Catalogue of the Printed Editions of Holy Scripture Volume 2, 1911) note as published by the British and Foreign Bible Society, are these Watts family printings. In Darlow and Moule, this 1848 Bible is entry #1678, noted as a reprint of #1669.

1. The Bowdoin College bookplate states that the Bible was a gift of the British and Foreign Bible Society (BFBS)

Looking at catalogue entry #1669, we learn that these later Watts impressions also included corrections by Garcin de Tassy. Looking to the first edition/first state of these printings (entry #1666), we find a note that the BFBS used the 1671 Propoganda edition's text at the suggestion of the Syrian Archbishop of Jerusalem.

About the Printing family Watts -

Richard Watts developed a reputation as "a cutter and founder of Oriental and foreign characters, of which he accumulated a considerable collection". His Oriental Type-Foundry was also the oriental printer for the Church Missionary Society, the Bible Society, the Prayer Book Society, and the Homily Society.

"William Watts made his name well known as a printer who could undertake to set up copy in almost every language, and turn out his work in thoroughly artistic style. The founts of type he possessed, available for the printing of works in almost every known language, would have done honour to the wealthiest and most learned of academies." - The Athenaeum, Mr. Mavor Watts' Printing Office, 2213, p.422

"The valuable matrices of the numerous founts of type, embracing nearly every known written language in the world, and produced by Mr Watts with much assiduity and at great expense, were fortunately preserved. Some of the founts were cut under the personal superintendence of celebrated Oriental, classical, and missionary scholars, and are much used by the British and Foreign Bible Society in distributing the Holy Scriptures all over the world. There are considerably over two hundred of these languages, not to speak of the different dialects... Swatow, Pwo-karen, Lepcha, Kinika, Nupe, Bullom, Batta, Lifu, Tchuwash, Tukudh, Wuch, Ossetian..." - E. C. Bigmore, C. W. H. Wyman, A Bibliography of Printing (Cambridge University Press, 2014), p. 265

The bookplate states that the book was given to Bowdoin College, in 1853, by the British and Foreign Bible Society.

Measures approx. 22.2 x 14.5 x 7 cm. Leather binding, re-spined. Spine with five raised bands; five compartments with a central gilt medallion surrounded by leafy corners, one compartment with Holy Bible in gilt, re-laid from the original spine. The boards are blind panel-stamped with a central arabesque design and a frame that has corner palm fronds.

Withdrawn stamp and bookplate of Bowdoin College on pastedown.

Book reads in Arabic style, front to back when compared to Western printings.

Gatherings signed in eights, but small quarto in size.

See pictures. Rebacked, with original spine label retained. Corners a little worn. A few tiny flecks of gilt on the boards. The binding was repaired well; it's a very nice looking binding. The top edge of the front board turn-in has a little leather chip. The pastedown has a library stamp and an ex libris plate of the library. Hinges have been repaired with tissue, not toned to match endpapers. Thumbing and a little edge chipping to the 1st blank unpaginated leaf at the rear of the volume. Also, the last printed page has a small graphite mark at the bottom edge, no text affected. Moving to the Arabic front, the pastedown has a binder's ticket. "Arabic Bible" is written in graphite at the rear of the free endpaper. First dozen leaves have a light crease at center. Some toning and occasional rust spots throughout. Very little signs of use, with little to no thumbing.