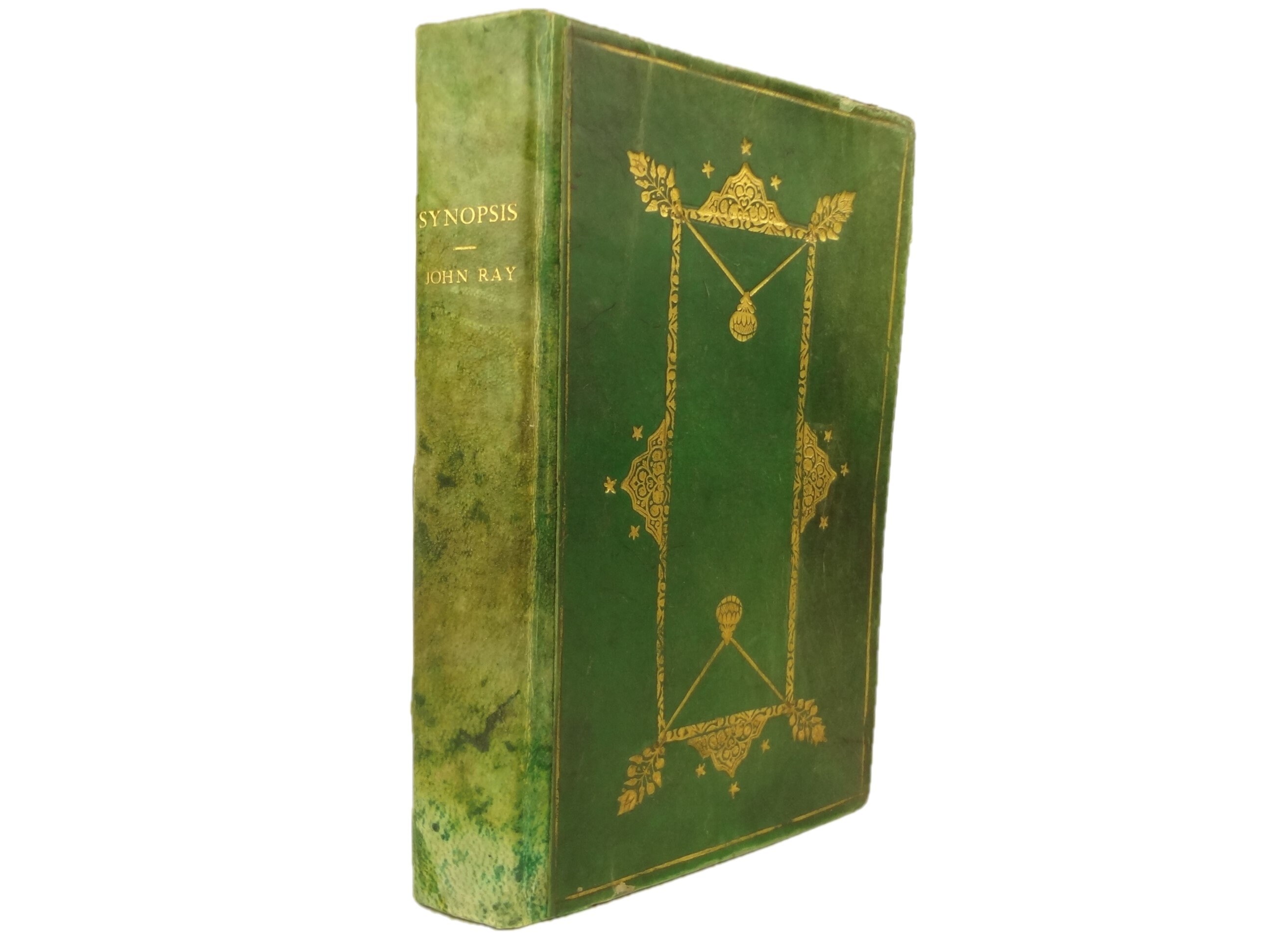 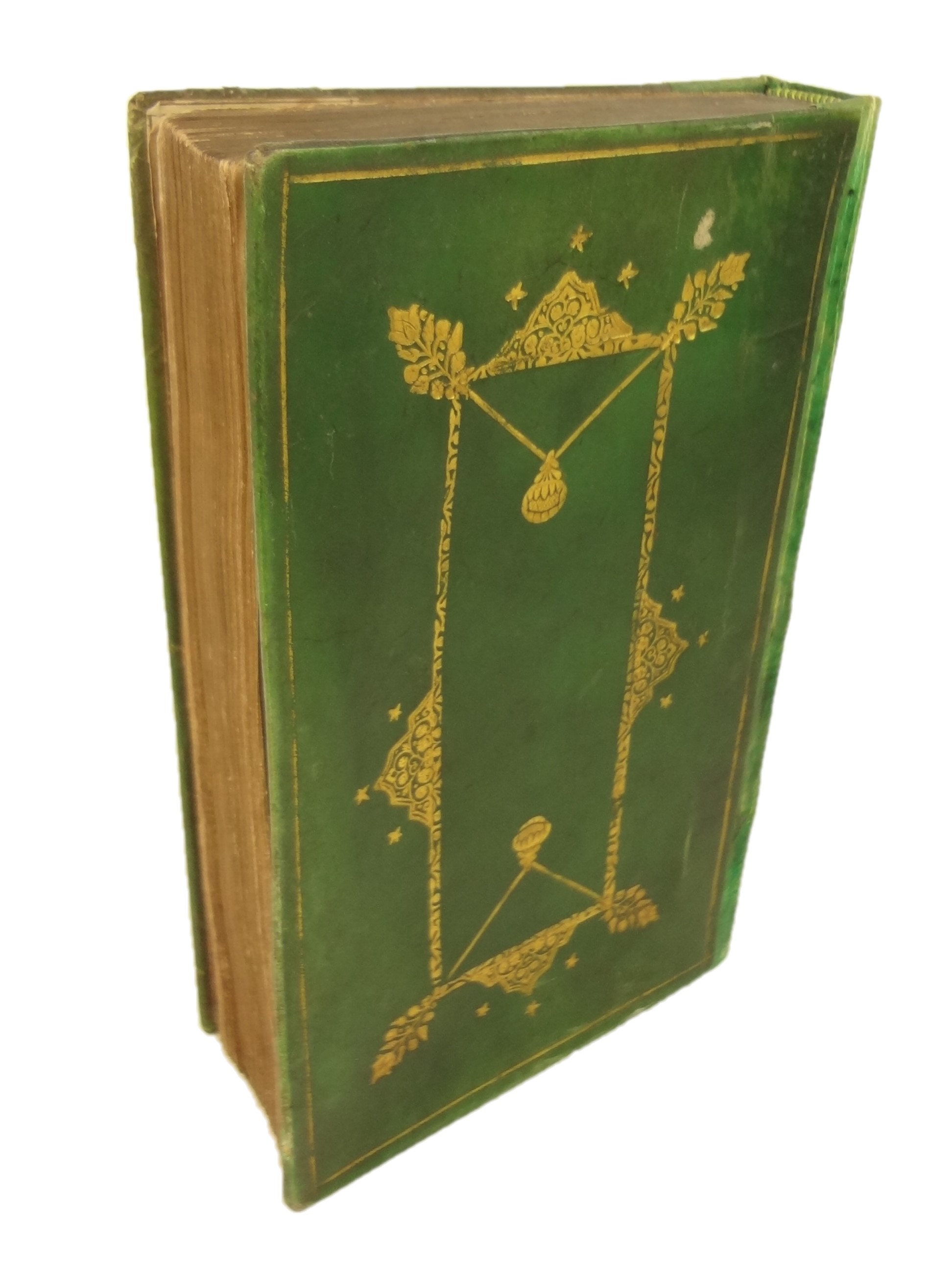 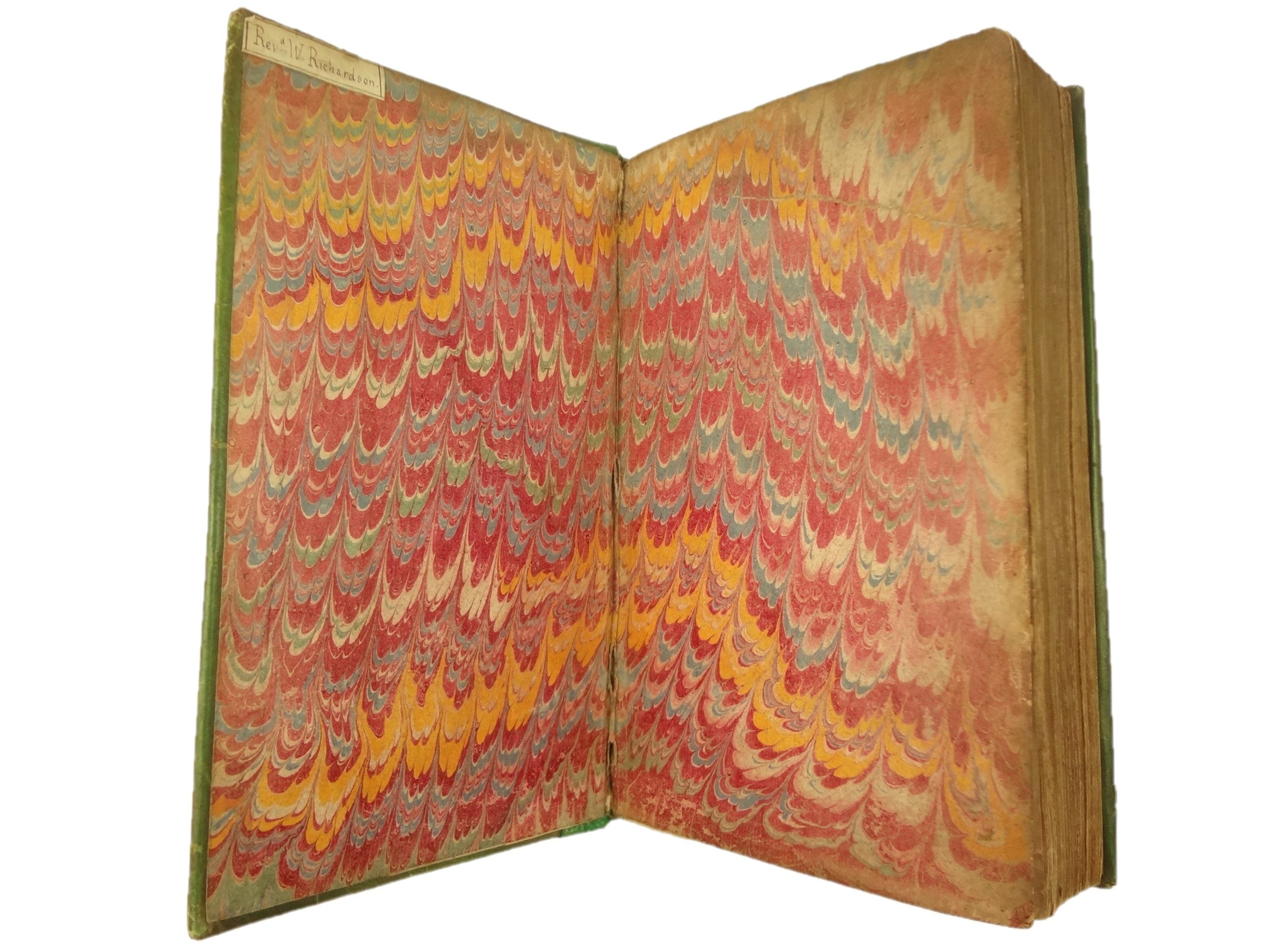 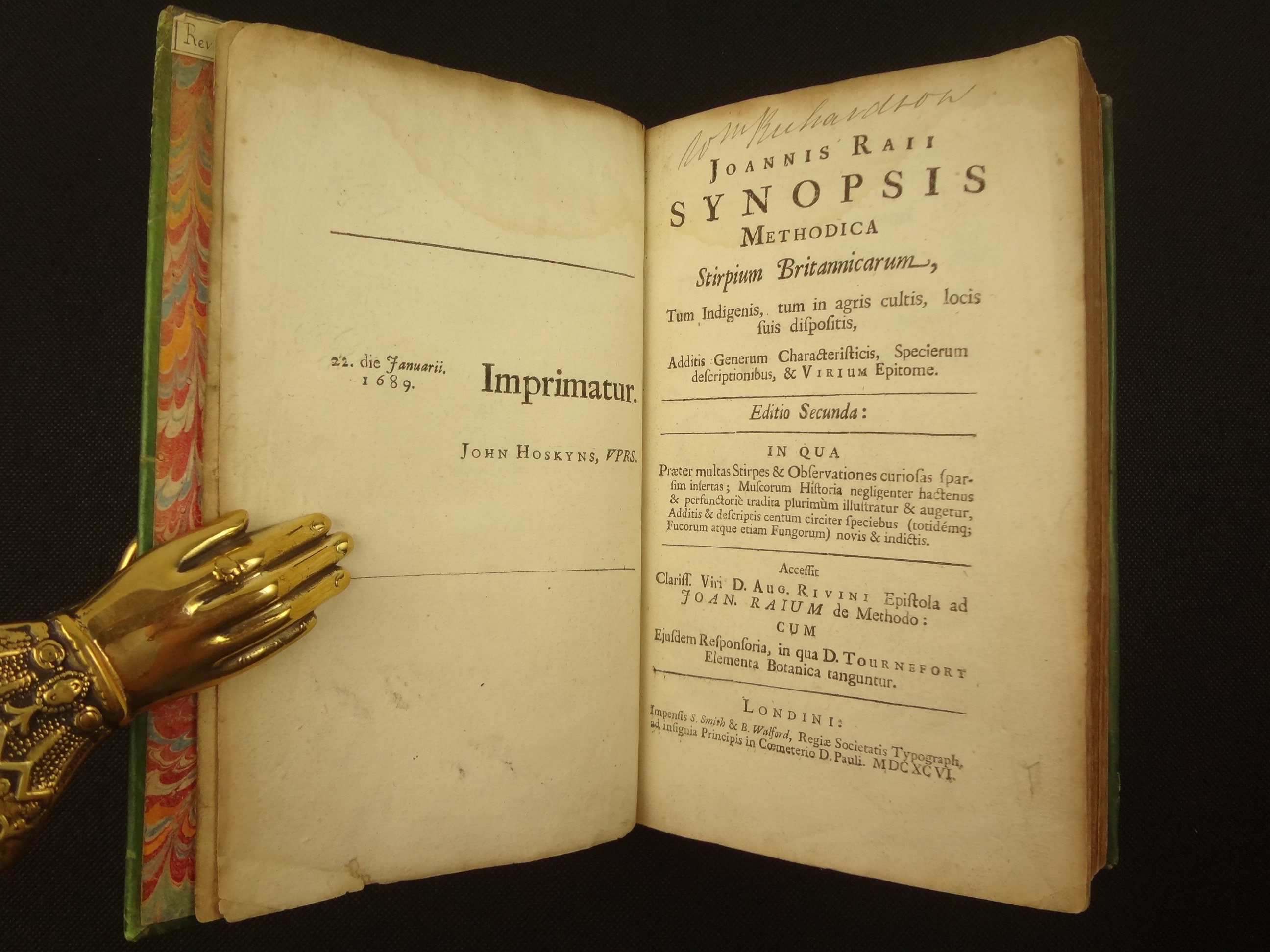 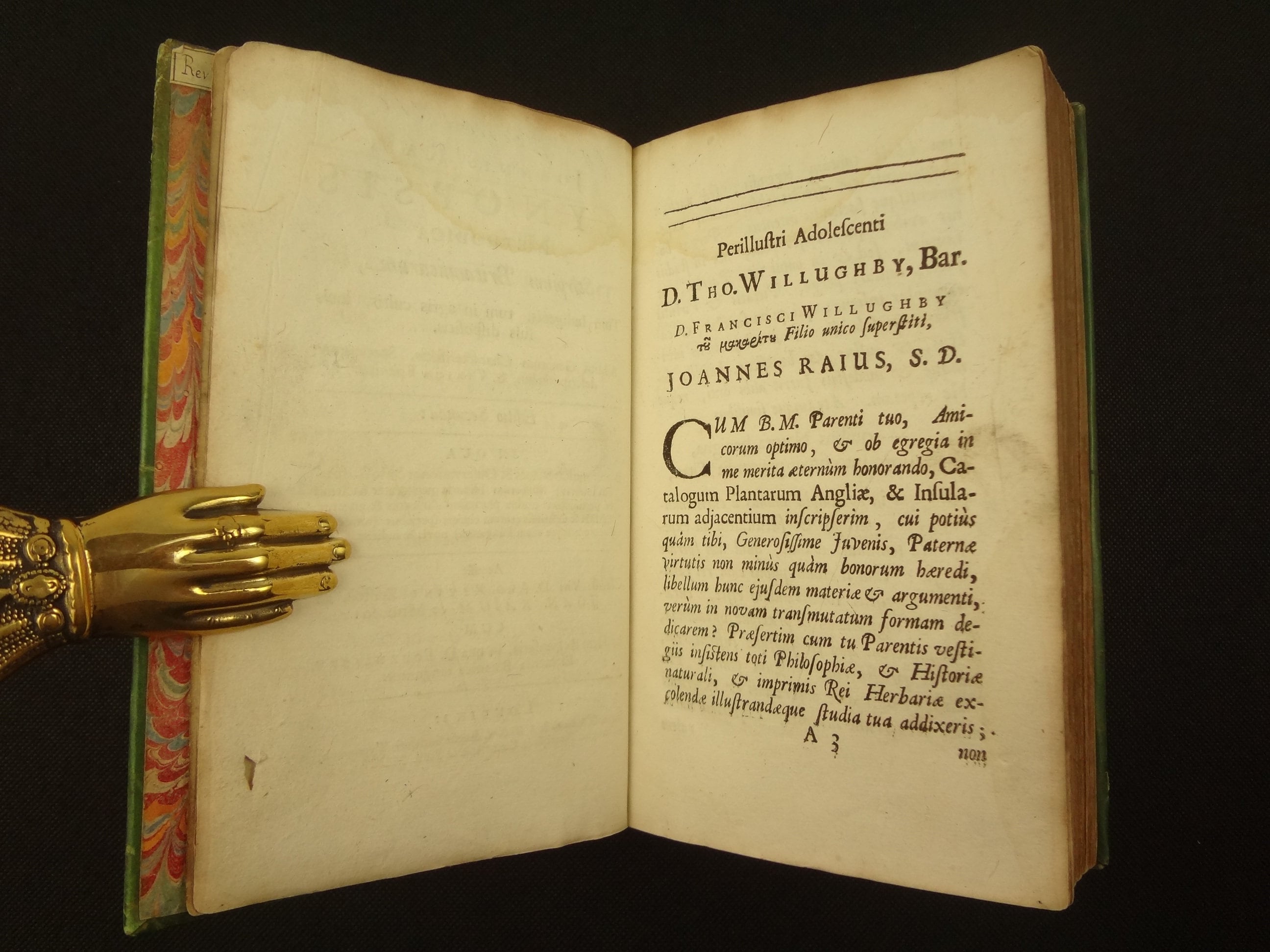 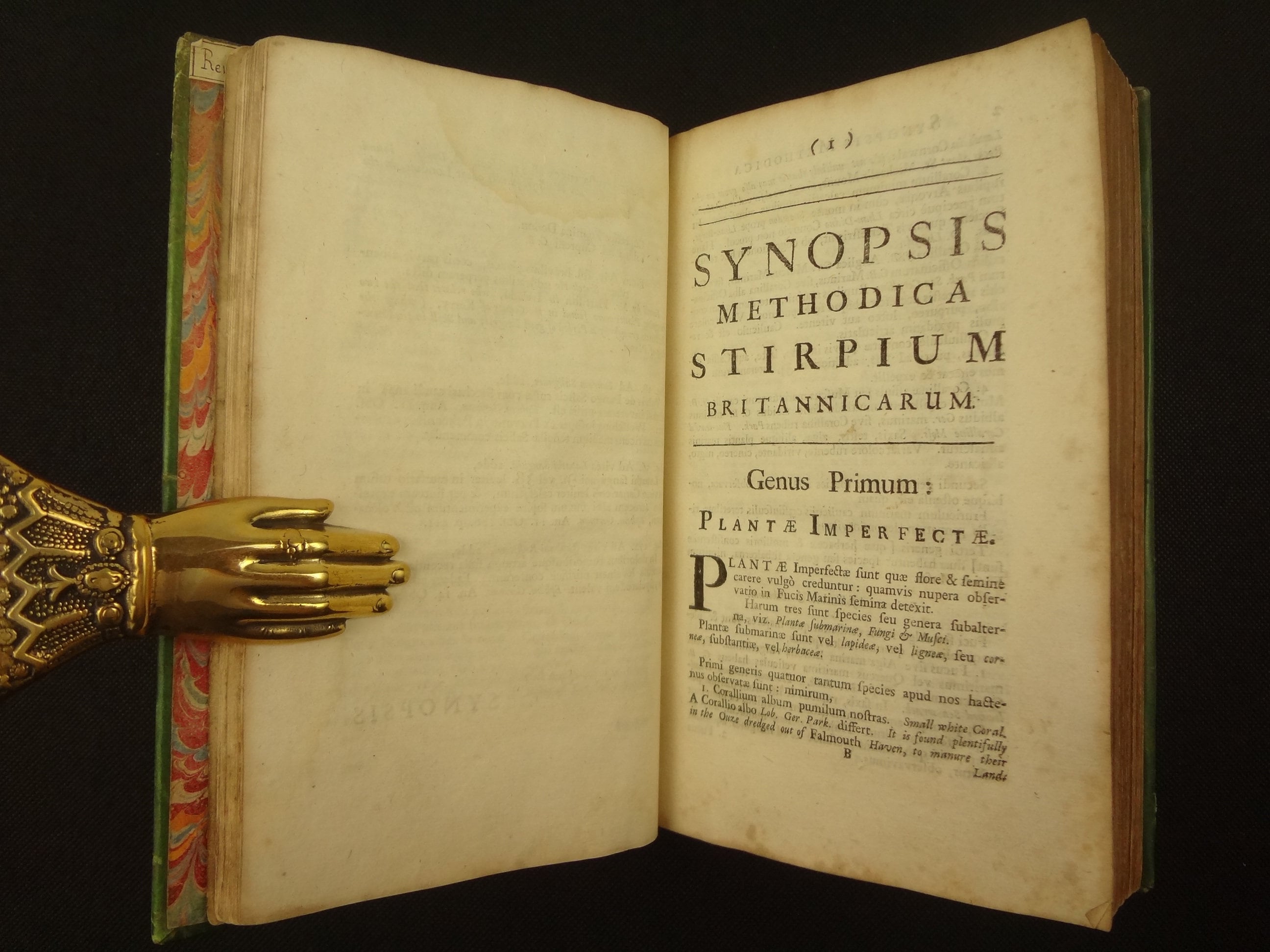 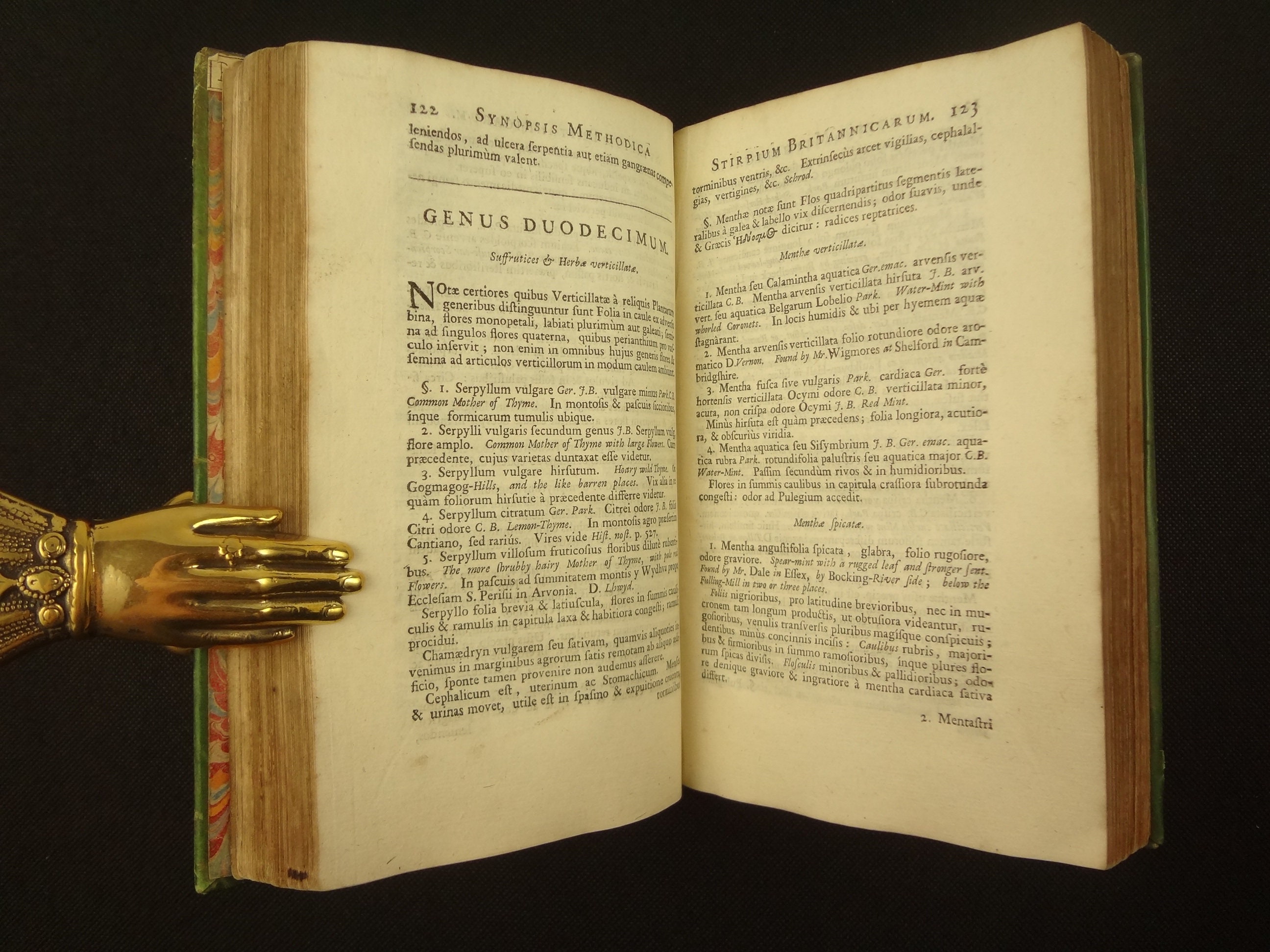 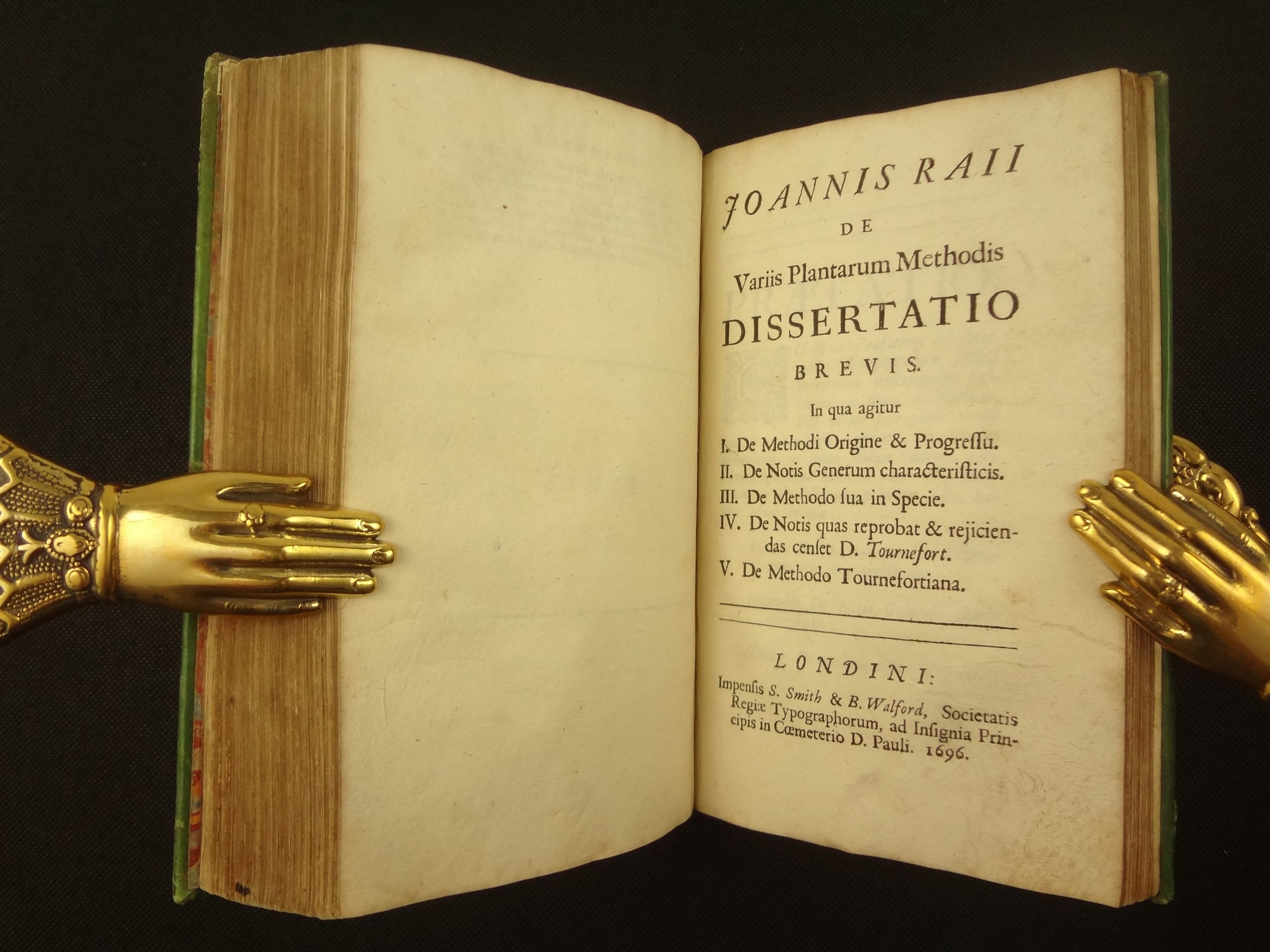 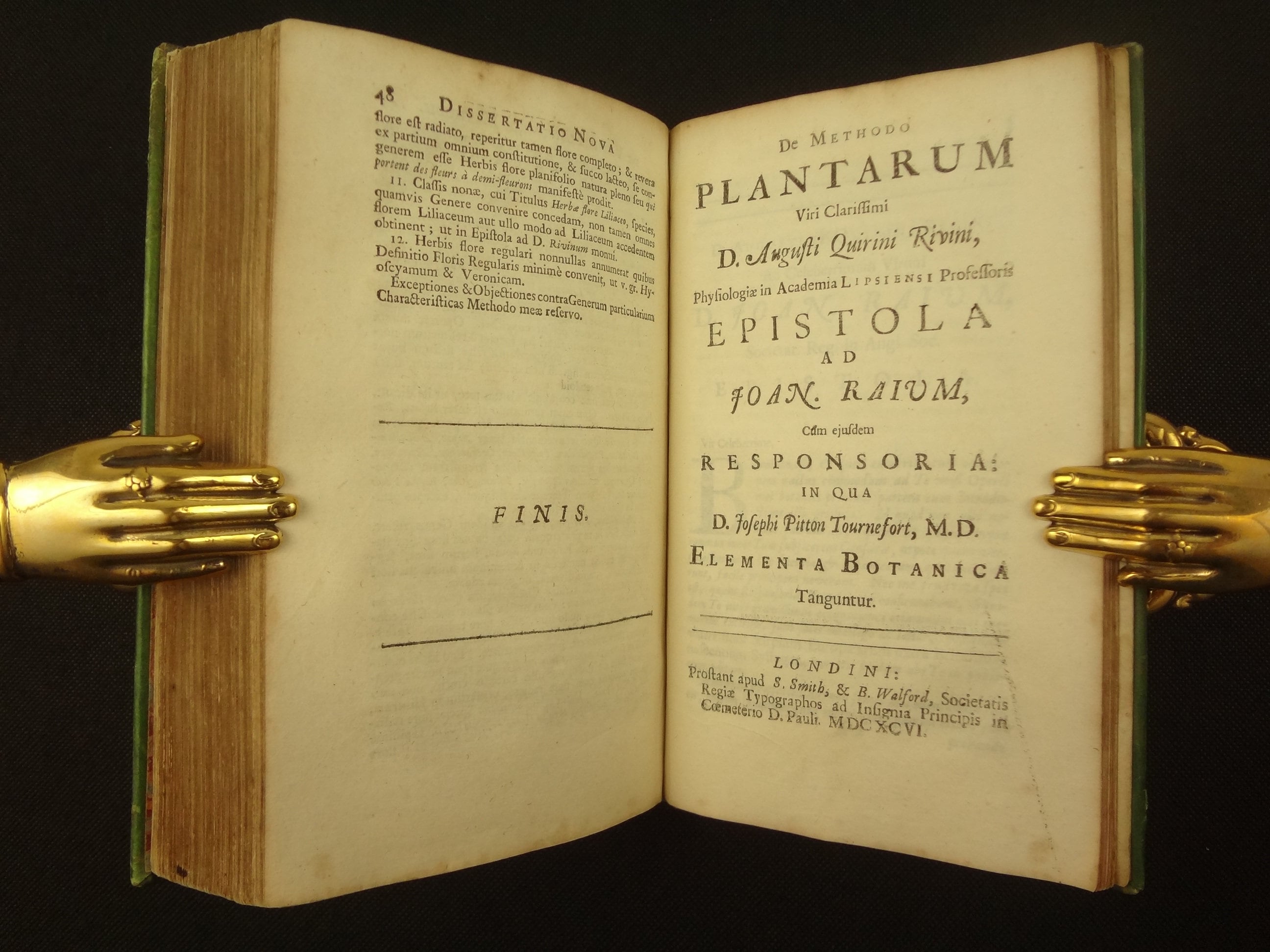 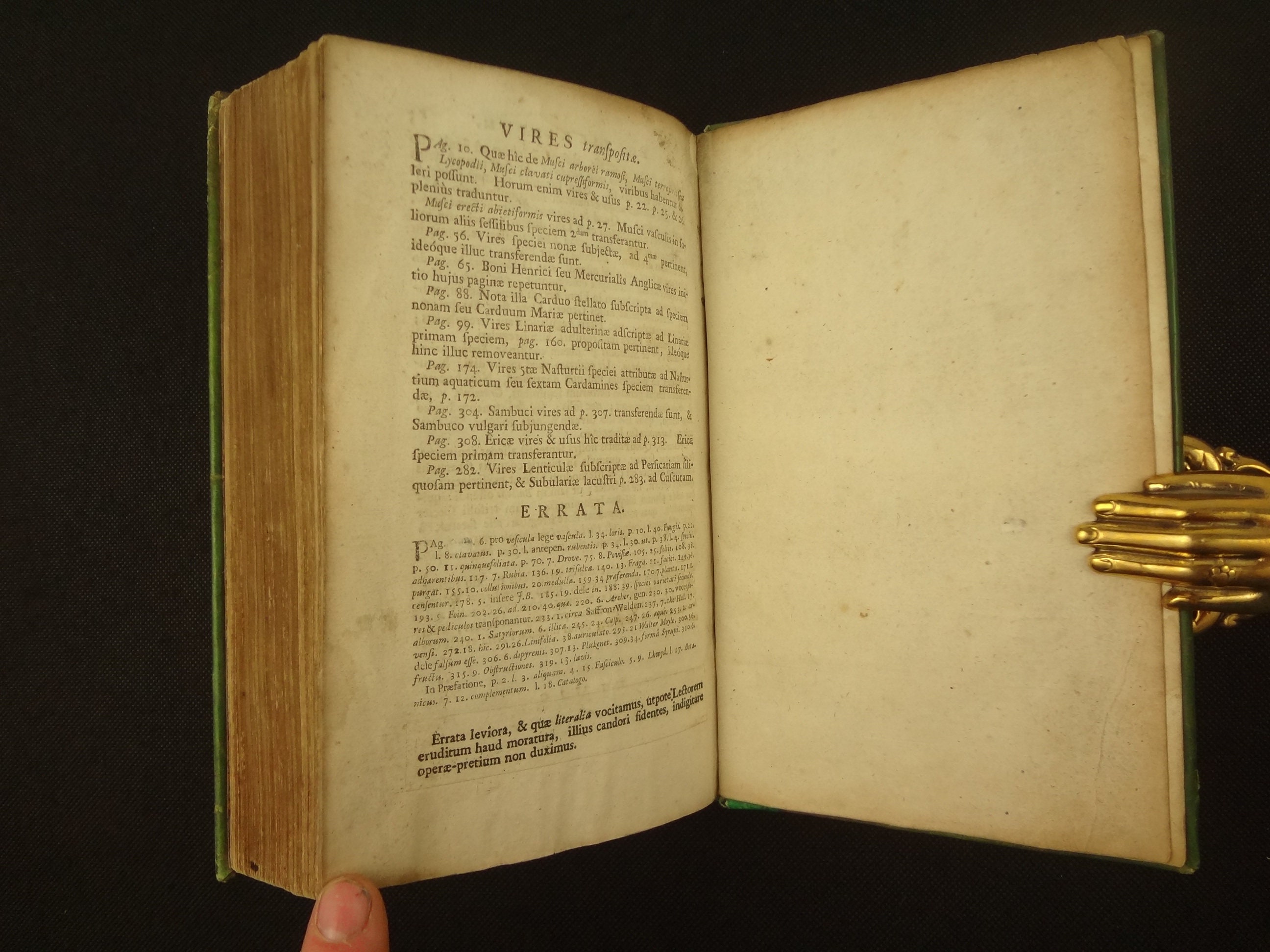 The second edition (1696) of John Ray's seminal work on classifying the plants of Great Britain, in a possibly poisonous arsenic-laced green binding. Also bound in are Ray's Variis Plantarum Methodis Dissertatio Brevis and a printed correspondance between him and the German naturalist August Rivinus; three works bound in one binding.

“In 1670 John Ray published anonymously the first edition of his Catalogus Plantarum Angliæ, which , though only alphabetical in its arrangement , and confined to flowering plants, far surpassed in accuracy Merrett's Pinax , its chief predecessor. In 1690 he recast the Catalogus Plantarum Angliæ into a systematic form under the title of Synopsis Methodica Stirpium Britannicarum , the first systematic English flora , which was for more than seventy years the pocket companion of every British botanist.” – Dictionary of National Biography, page 341, 1896

The second work is a short dissertation on plant order, in five sections. Ray discusses origin, characteristics, species, the methods of Tournefort, etc.

The last work is a publication of a letter to Ray from Augustus Rivinius (on plant classification method) and a response from Ray.

Together a wonderful look at late 17th century plant classification, with the biggest names represented (Ray, Tournefort, and Rivinus).

Pre-1900, arsenic was often used in the production of green. The University Library of Southern Denmark recently published a work where they studied green binding on antiquarian books, and found that many of them contained arsenic (Poisonous Book: Analyses of Four Sixteenth and Seventeeth Century Book Bindings Covered with Arsenic Rich Green Paint).

From their abstract - "Eforts to read medieval manuscript waste recycled as bookbinding material in the sixteenth and seventeenth centuries have resulted in the chemical analysis of four books housed at the University Library of Southern Denmark and the Smithsonian Libraries in Washington DC. Four green coloured book bindings have been investigated by optical microscopy, micro X-ray fuorescence, X-ray difraction, Raman spectroscopy, mass spectroscopy, and laser ablation inductively coupled plasma mass spectrometry. The results show that the green pigments used to obscure the manuscript waste in all four cases contain orpiment (As2S3) and indigo (C16H11N2O2)."

The publication establishes that arsenic was a common ingredient in green paints (for centuries), and that green was used to cover imperfections in cheap/reused parchment bindings. Some German binding advertisements of antiquity advertise green parchment as the cheapest option, for this reason.

I do not own the tools to test this book for arsenic, but until proved elsewise, the binding should be handled as if it is poisonous. It should be handled with gloves, and hands should always be watched after use. It needs to be stored in a dry environment and care must be taken to not breathe in any dust that might come off the binding.

Worldcat OCLC number 14313332. Not rare, found in many of the world's best libraries.

Measures approx. 19 x 12 x 3.5 cm (but splayed). Green vellum binding, re-spined. Boards with (partial), cottage roof-like design, with central florets and corner leaves; single gilt fillet around edges. Spine with "Synopsis, John Ray" in gilt. Quires signed as if three printed works (I did not find reference regarding whether they were printed together).

Moisture mark throughout from top edge, sometimes in text. Several names and bookseller notes on verso of flyleaf and recto of imprimatur. Small hole near bottom of impimatur and title page. Some thumbing throughout. Occasional toning, dog-eared corner, fox spot, page edge chip, etc. Rev. W. Richardson written in manuscript at head of title page. Moisture mark intrusion from fore-edge also. Inky thumb and spot at bottom margin of 307. Errata note pasted at bottom of verso of last leaf of the bound work (letters between Rivinus and Ray). Another bookseller note on recto of rear flyleaf.

Despite notes, a handsome book with a colorful (and possibly dangerous) binding.