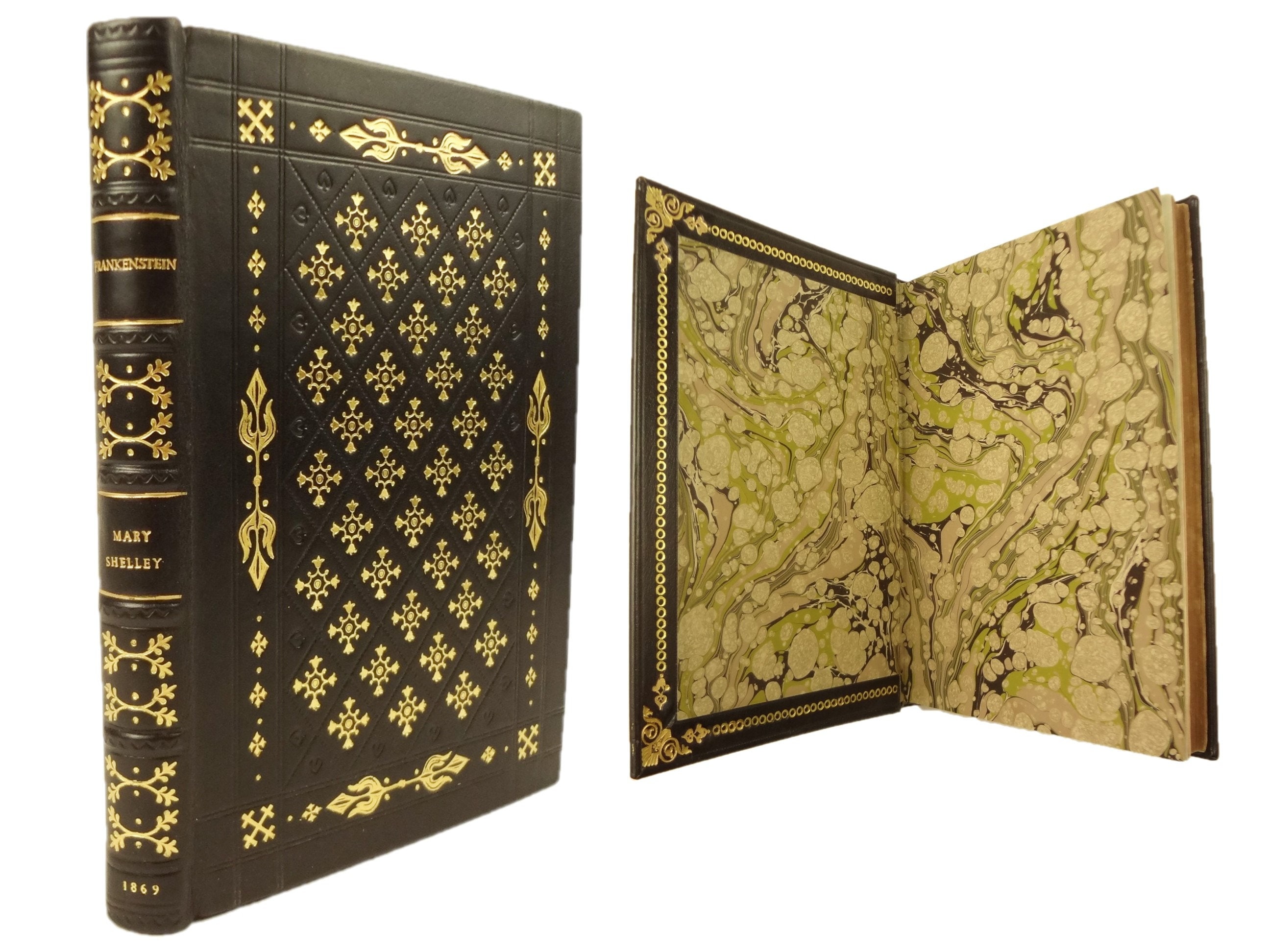 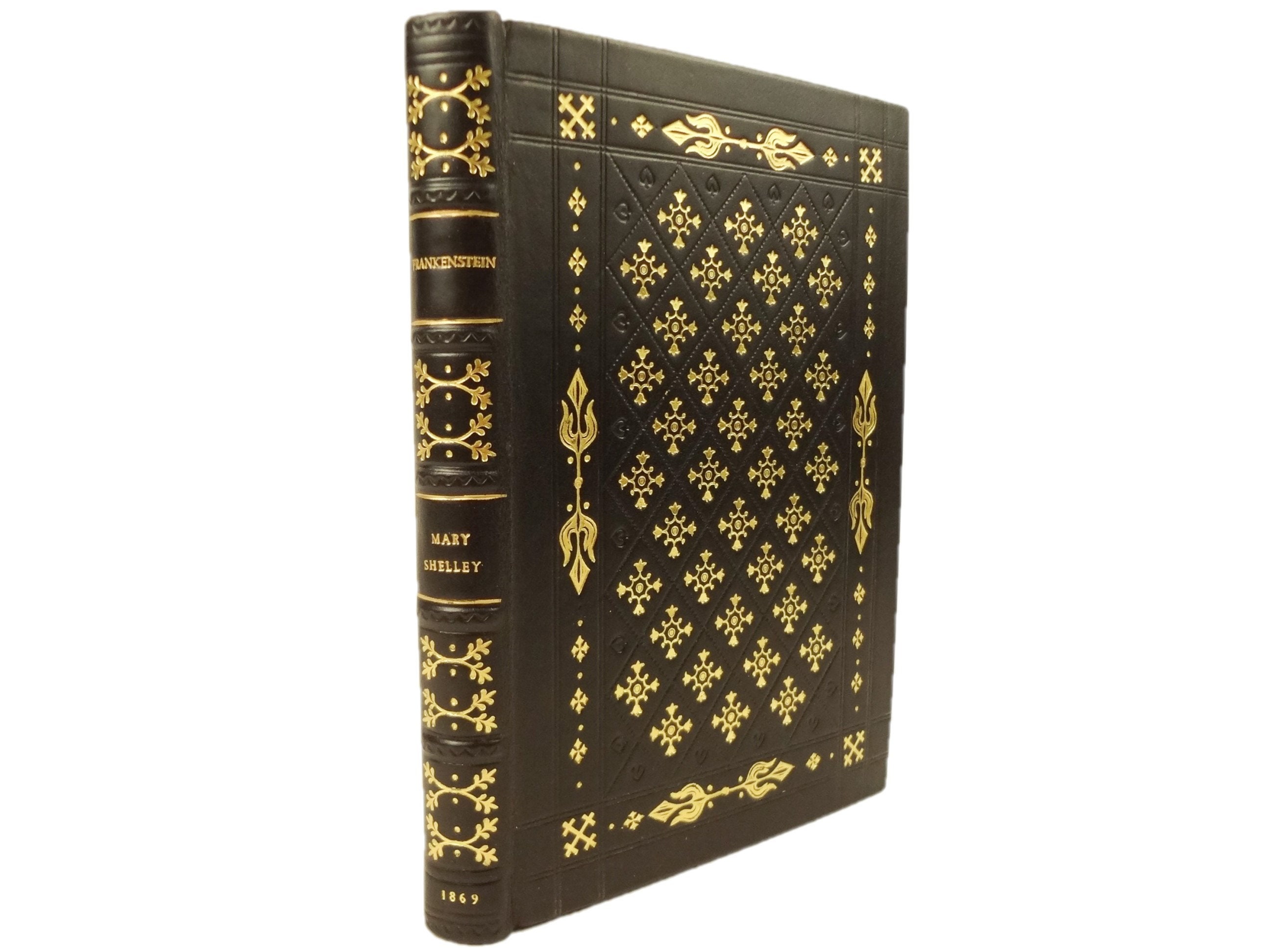 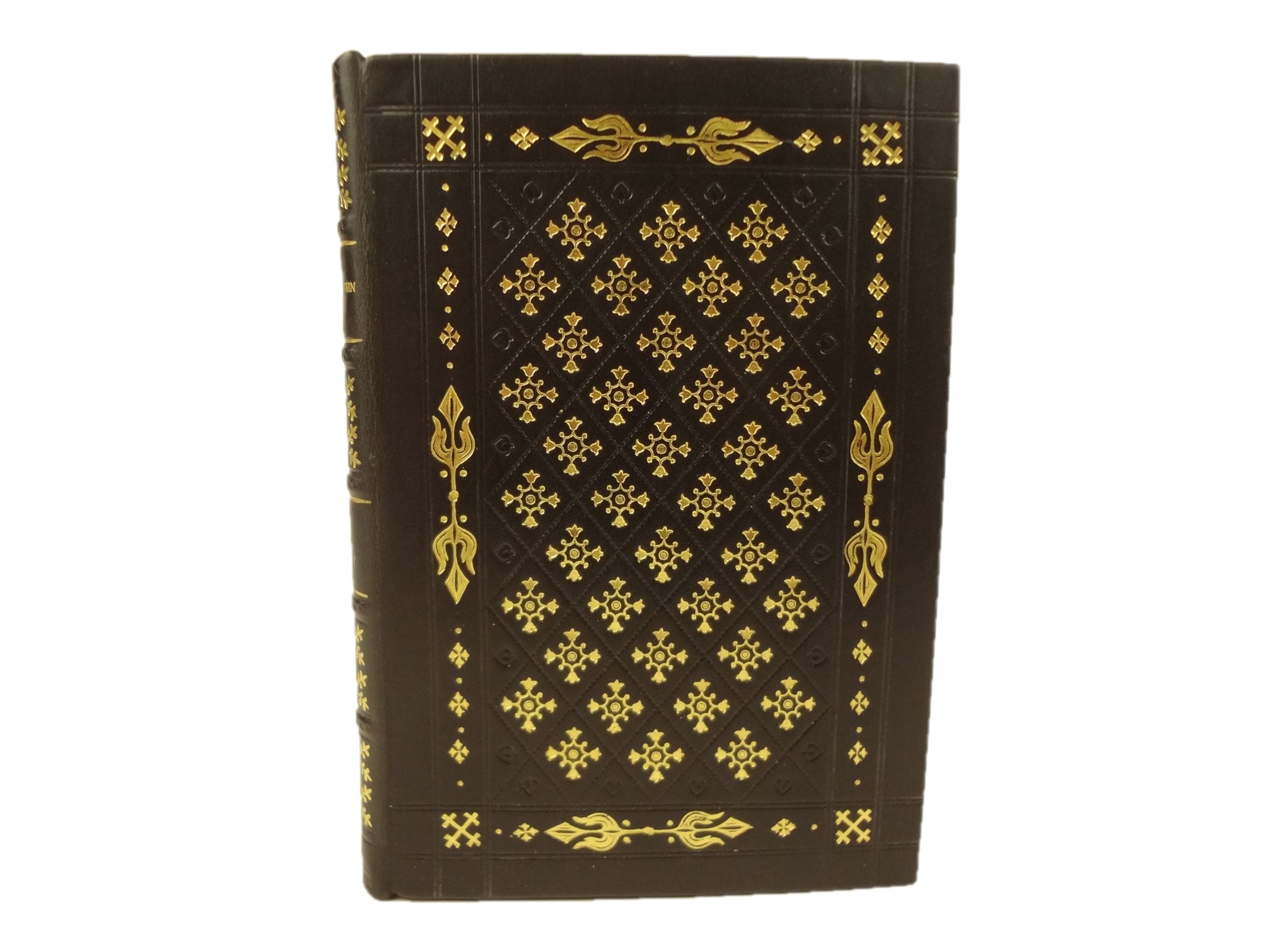 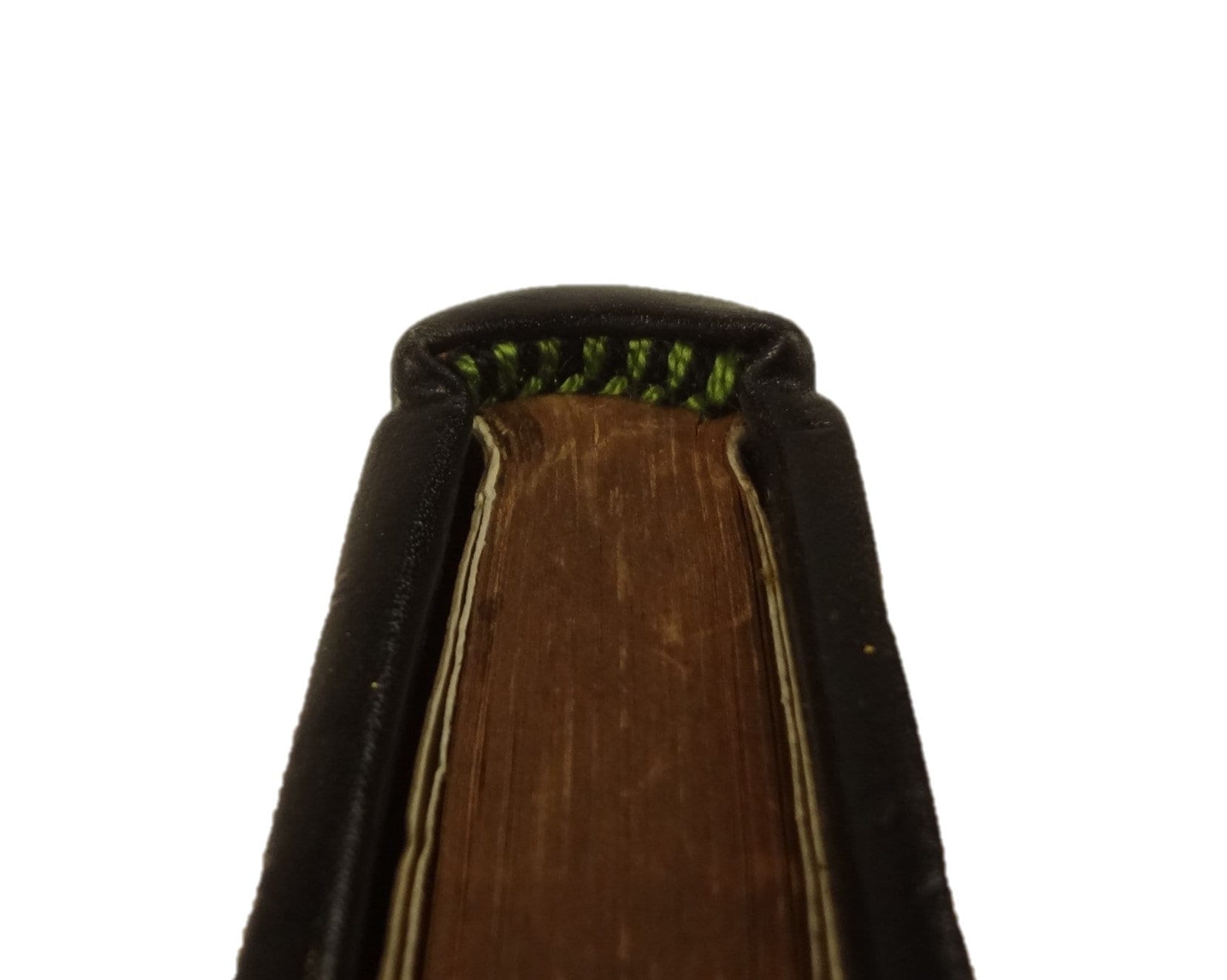 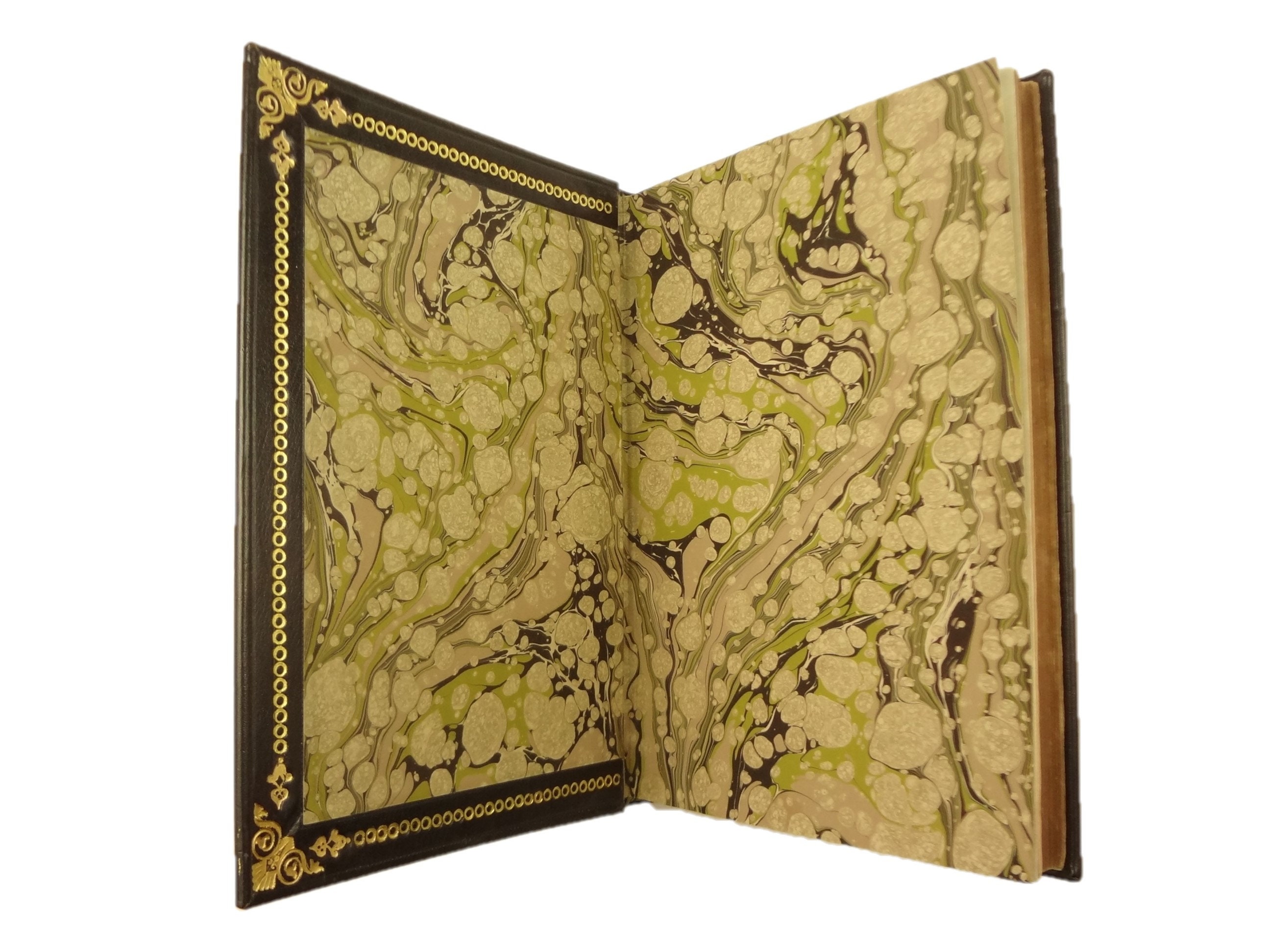 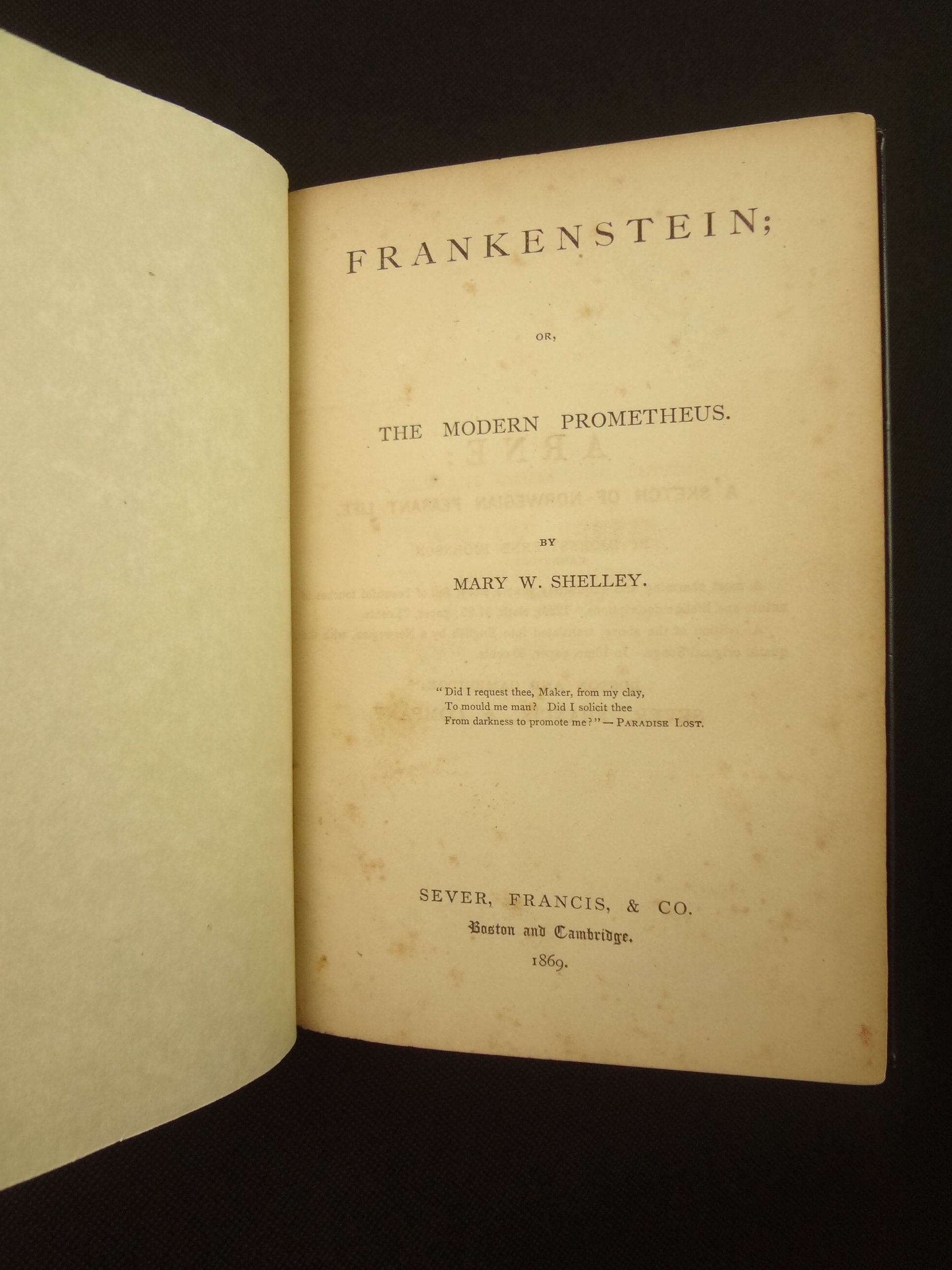 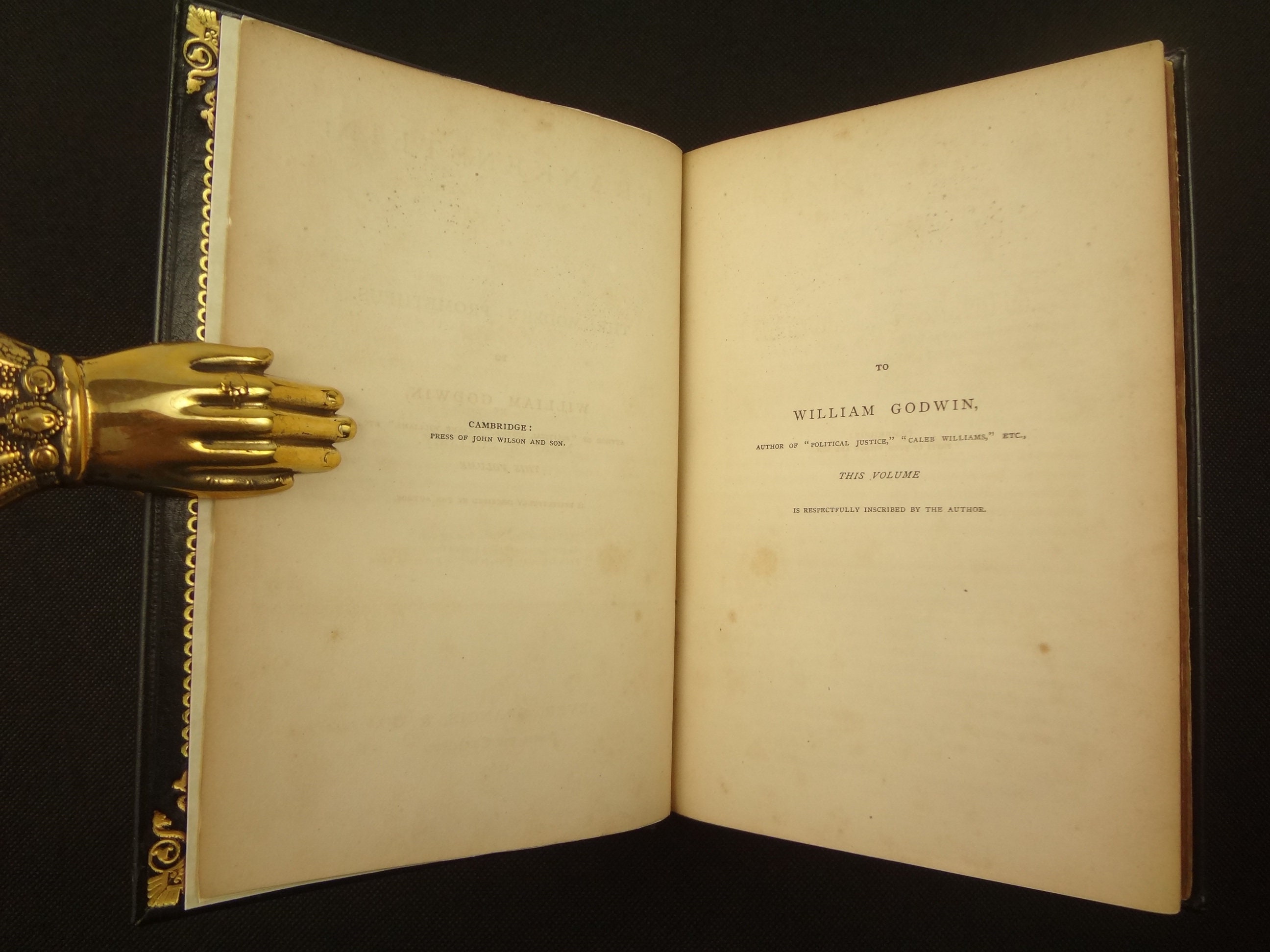 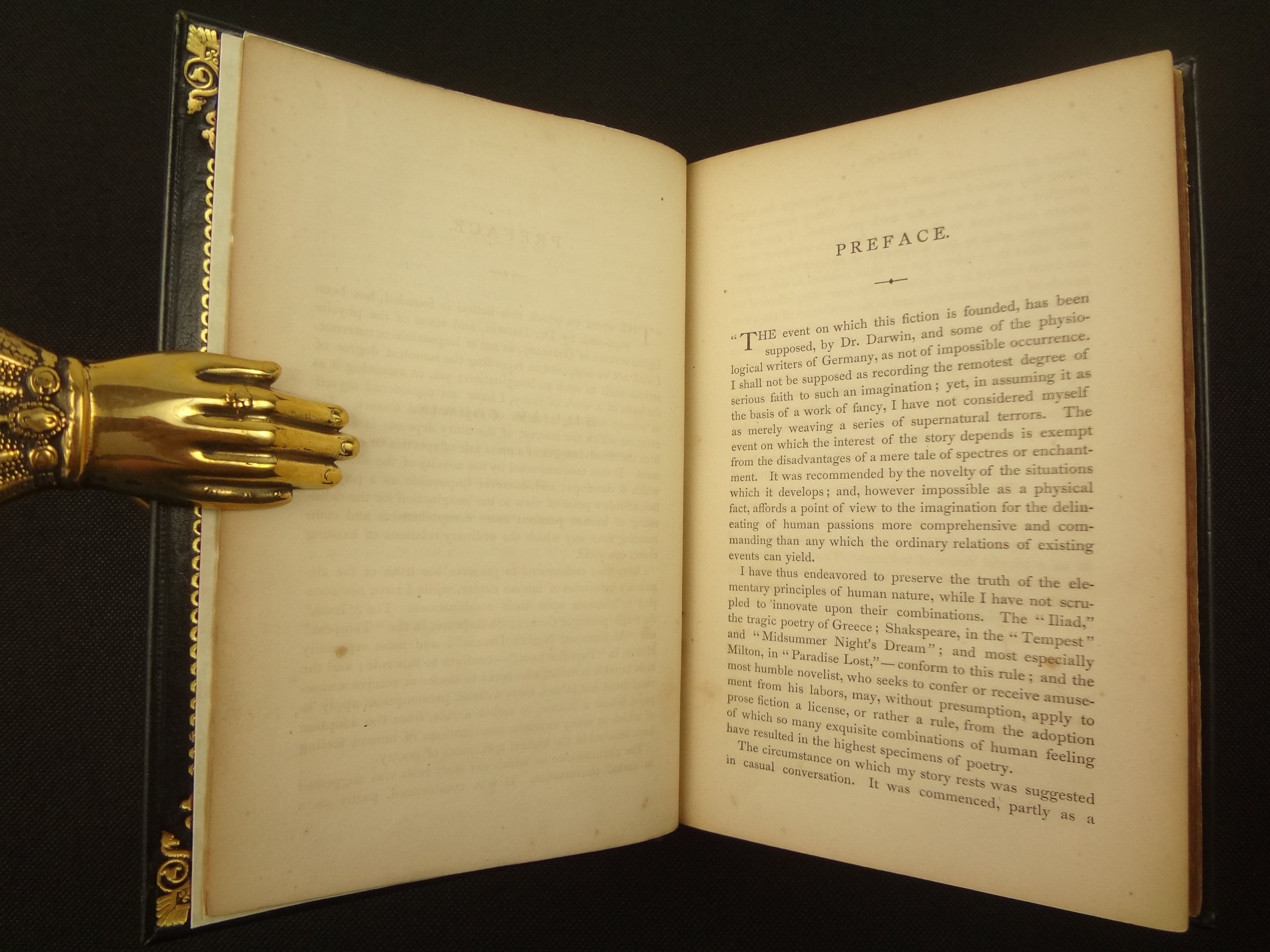 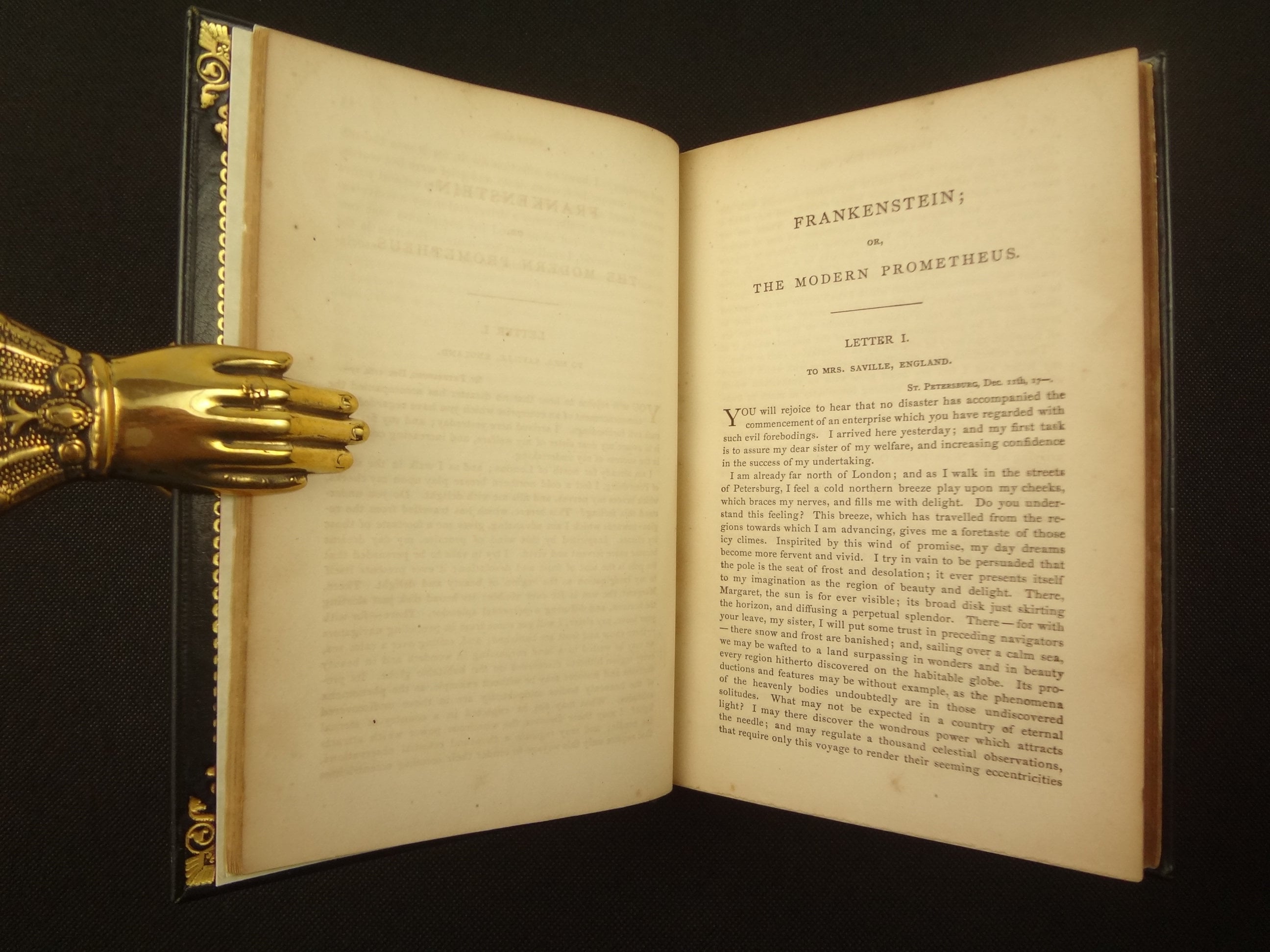 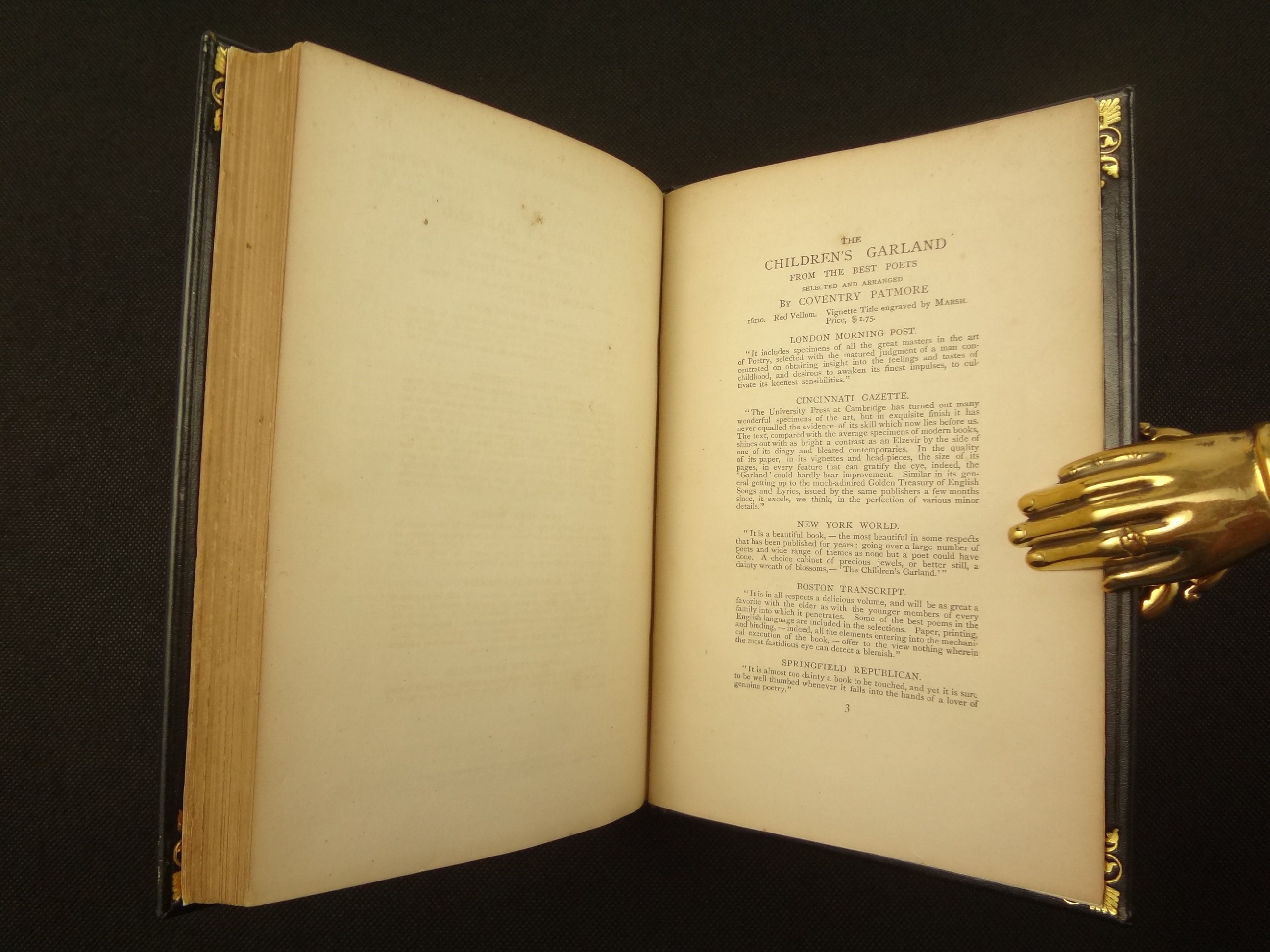 The third American edition of Frankenstein; or, The Modern Prometheus, by Mary W. Shelley, printed in 1869 by Sever, Francis and Co. of Boston and Cambridge. This copy in a beautiful signed binding.

About Frankenstein (in extreme brief) -

Frankenstein; or, The Modern Prometheus is an 1818 novel written by English author Mary Shelley. Frankenstein tells the story of Victor Frankenstein, a young scientist who creates a sapient creature in an unorthodox scientific experiment. Shelley started writing the story when she was 18, and the first edition was published anonymously in London on 1 January 1818, when she was 20. Her name first appeared in the second edition, which was published in Paris in 1821.

Shelley travelled through Europe in 1815, moving along the river Rhine in Germany, and stopping in Gernsheim, 17 kilometres (11 mi) away from Frankenstein Castle, where, two centuries before, an alchemist had engaged in experiments. She then journeyed to the region of Geneva, Switzerland, where much of the story takes place. Galvanism and occult ideas were topics of conversation for her companions, particularly for her lover and future husband Percy B. Shelley.

In 1816 the largest eruption recorded in history occurred, Mount Tambora, causing “The Year Without a Summer”. Temperatures plummeted across the globe. Crops struggled and stories abound of the hardships of 1816. That year, while travelling, Mary, Percy and Lord Byron had a competition to see who could write the best horror story; it is told that they couldn’t recreate outside due to the weather. After thinking for days, Shelley was inspired to write Frankenstein after imagining a scientist who created life and was horrified by what he had made.

Shelley completed her writing in April/May 1817, and Frankenstein; or, The Modern Prometheus was published on 1 January 1818 by the small London publishing house Lackington, Hughes, Harding, Mavor, & Jones. It was issued anonymously, with a preface written for Mary by Percy Bysshe Shelley and with a dedication to philosopher William Godwin, her father. It was published in an edition of just 500 copies in three volumes, the standard "triple-decker" format for 19th-century first editions.

A French translation appeared as early as 1821. The second English edition of Frankenstein was published on 11 August 1823 in two volumes (by G. and W. B. Whittaker) following the success of the stage play Presumption; or, the Fate of Frankenstein by Richard Brinsley Peake. This edition credited Mary Shelley as the book's author on its title page.

On 31 October 1831, the first "popular" edition in one volume appeared, published by Henry Colburn & Richard Bentley. This edition was heavily revised by Mary Shelley and Percy Bysshe Shelley, partially to make the story less radical. It included a lengthy new preface by the author, presenting a somewhat embellished version of the genesis of the story. This edition is the one most widely published and read now, although a few editions follow the 1818 text.

This edition includes Shelley's prefaces to both the 1818 edition and the 1831 Bentley's edition.

The Davidson College Archives posted an article, Frankenstein: the Anniversary showing photos of their copy of the 1869 Boston edition. Their copy shows a variant in the bindings, with advertisements printed on publisher supplied colored paper at the front and back. This copy (here for sale) is from a different binding style, that was simpler and lacked the advertisements on publisher's paper. It does have printed advertisements at the rear.

More on the Editions -

This is the third American edition, after the 1833 Philadelphia edition and the 1845 New York edition. It is estimated to be about the 10th printing of the book, when you include all the internationally issued editions.

At a recent Christie's auction, a first edition 1818 printing sold for $1.17 million.
About the Binding -

The binding is stamped "K.M.M." and was executed by Karen McGuire, a second-generation book binder.

Black morocco fine binding. Boards framed in double blind fillet frame. Gilt tools inhabit the frame. The central compartment is diapered (diamond shapes) in blind by a pontille device, with hearts around the edges (in blind) and central gilt florets in each diamond. Five raised bands to the spine, with blind tooling; four compartments with leafy gilt decorations, and two compartments with the title and author in gilt. Year at base of spine in gilt. Black and green endbands. Original page edges (not recut). Turn-ins with gilt decoration and corner florets. Green and black marbled endpapers. Fresh blank unpaginated leaf at the front and rear.

Collation - Signed in eights. Signatures 1 through 10 have 8 leaves. Sigature 11 has 10 leaves (to include the last leaf and advertisement). Signature 1 extends through the first leaf of chapter one (slightly odd; they normally cover the introductory works, but the prefatory material ends at the 7th leaf, or page 14 in this printing).

See pictures. See pictures. Binding is recent, with very little wear; opens easily and well-done. There is toning and foxing as normal to 19th century paper, throughout; more towards ends and edges (it is not excessive). Page 77 corner dog-eared. Occasional opened-edge (but well-done); this means the binder didn't successfully cut all the folded edges, (from the publisher) and the reader had to open the page with a knife (the fold was still there until they cut it). I see a few tiny candle-ember black spots.