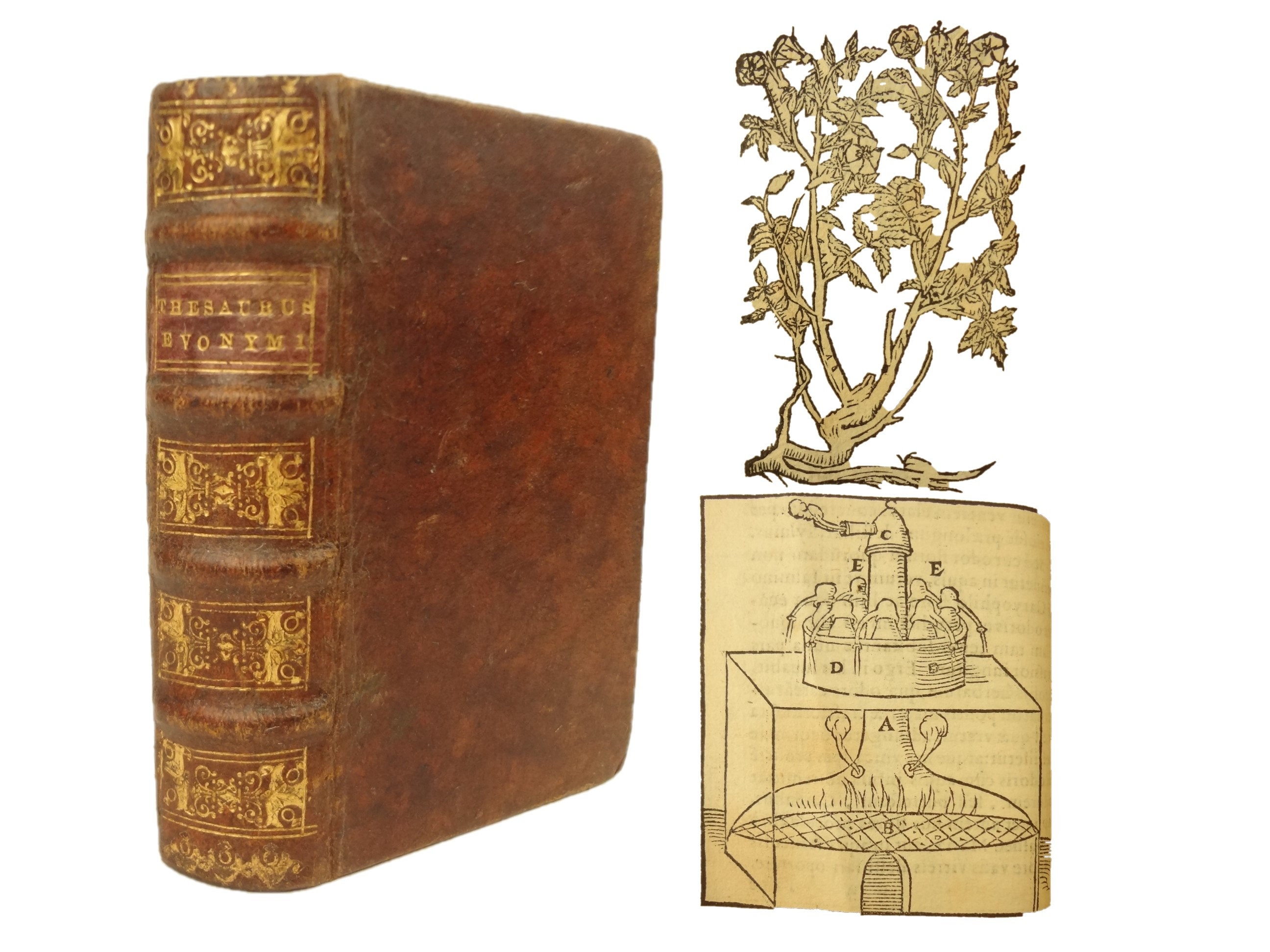 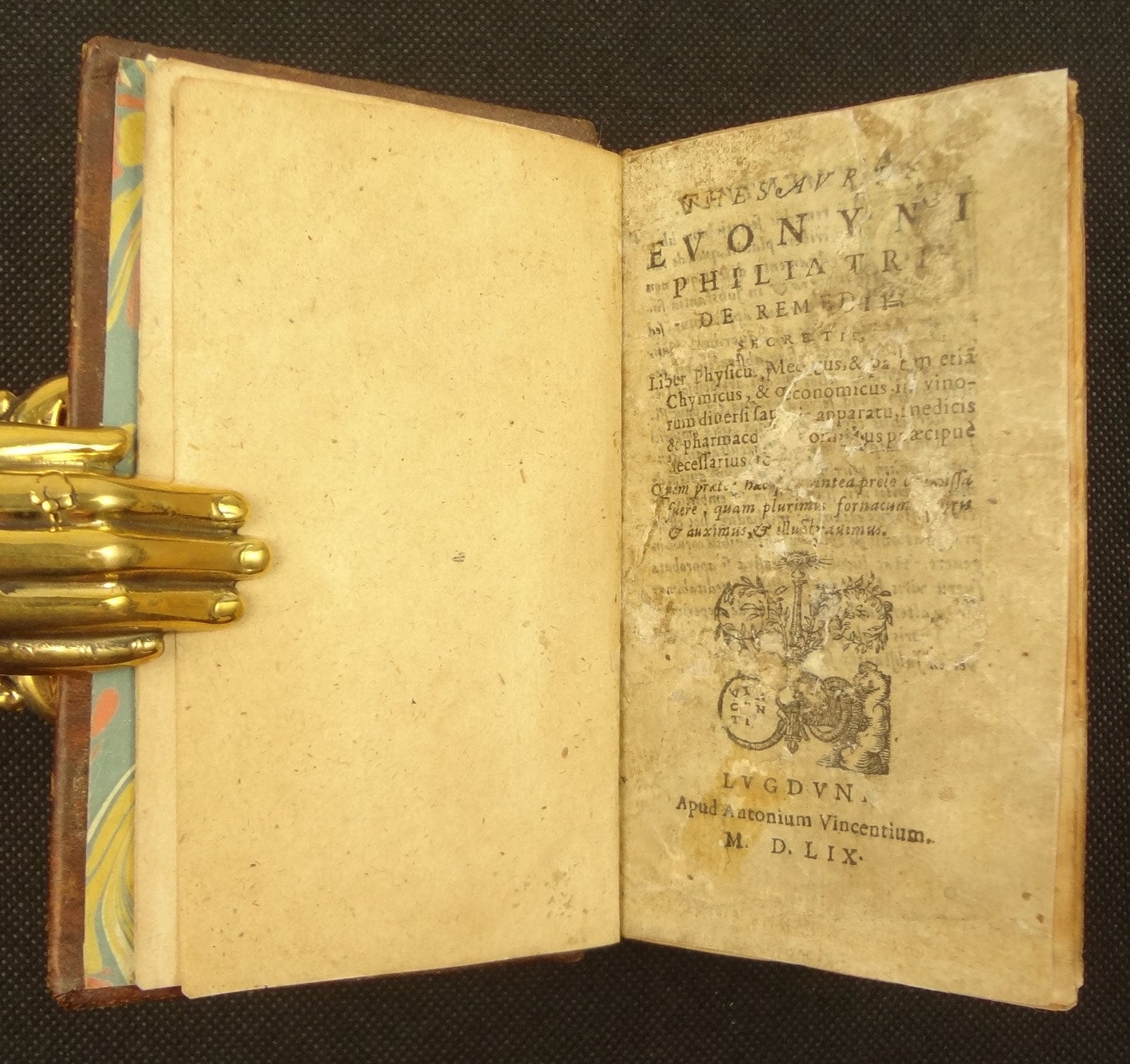 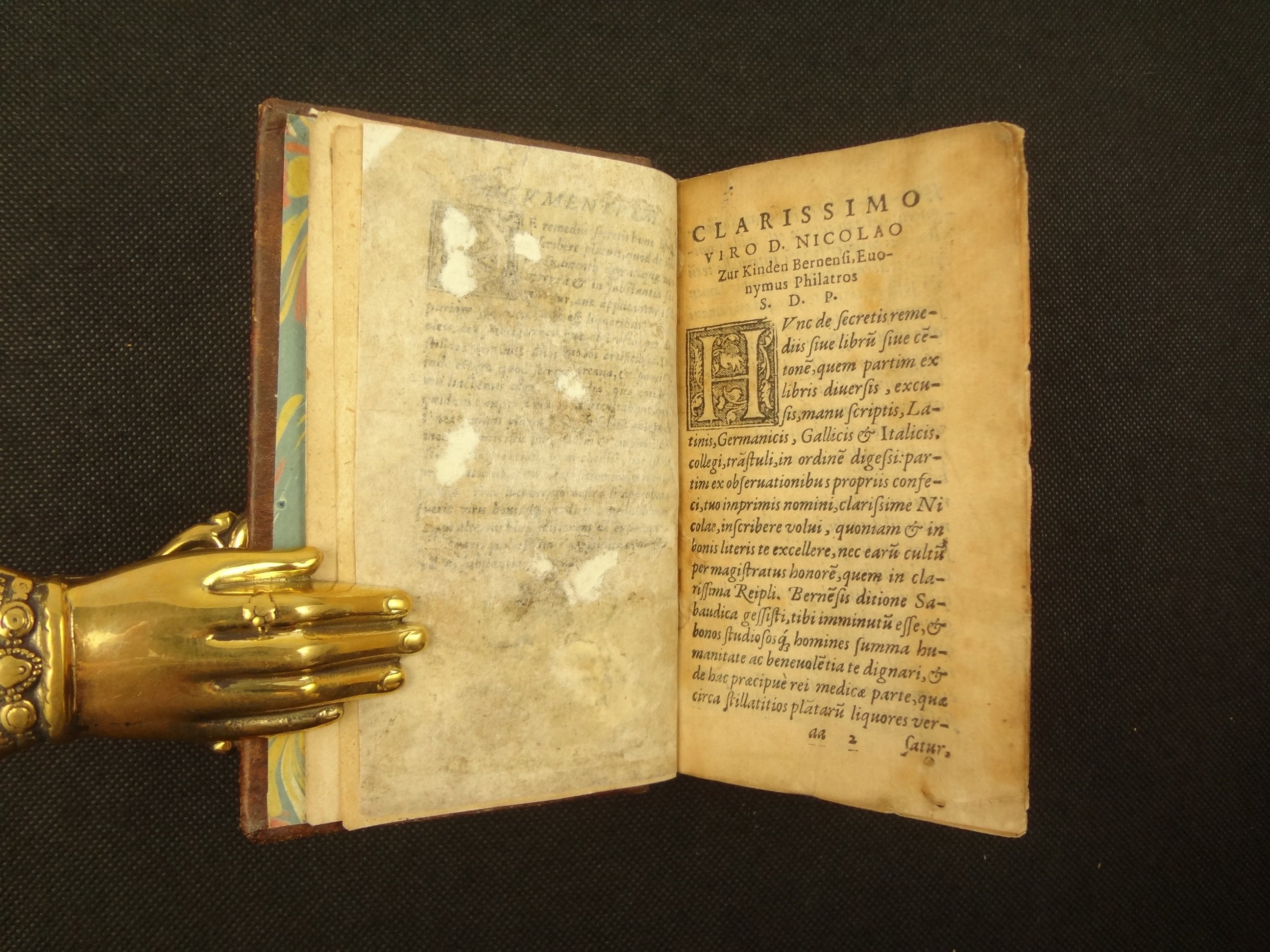 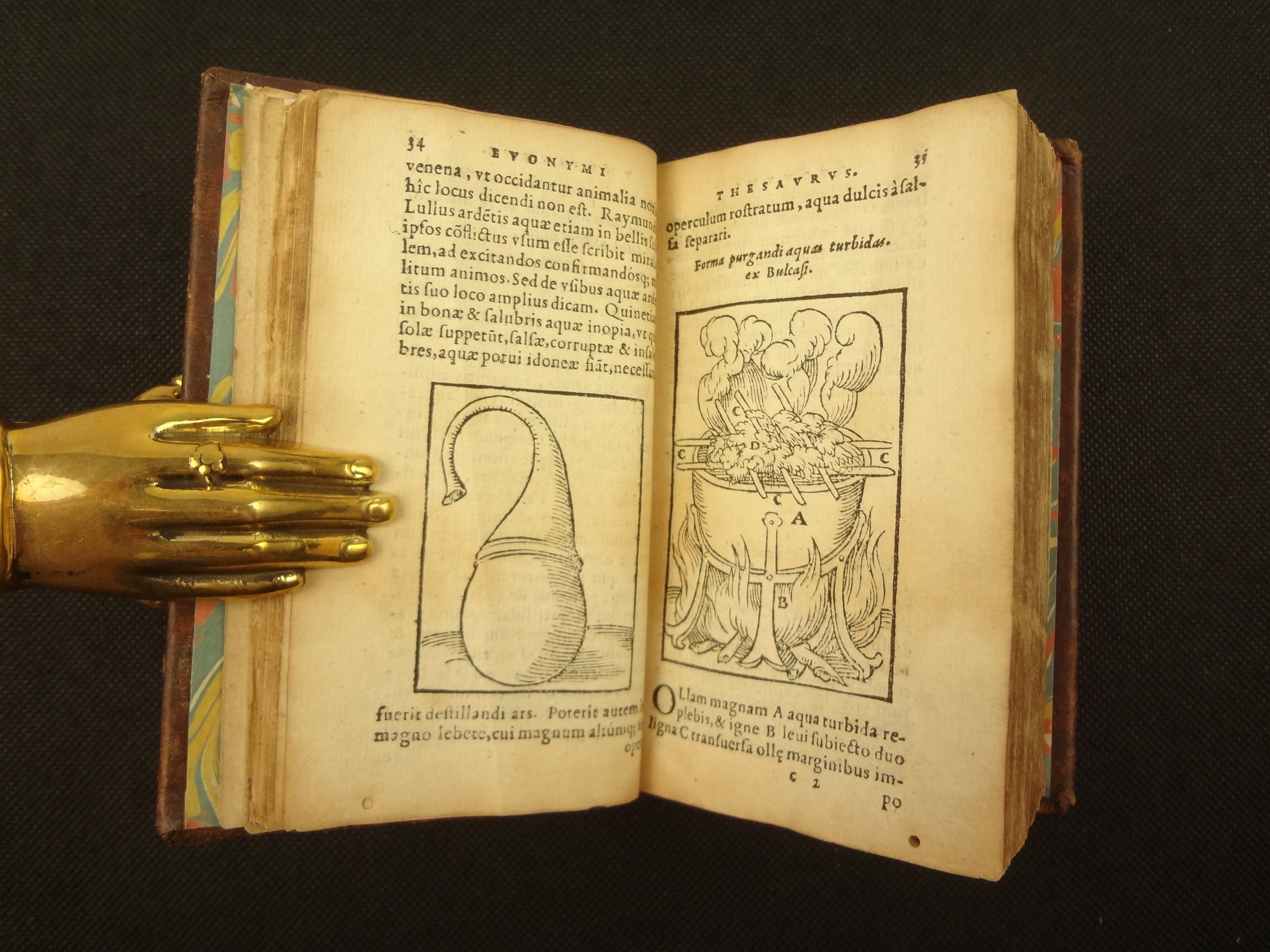 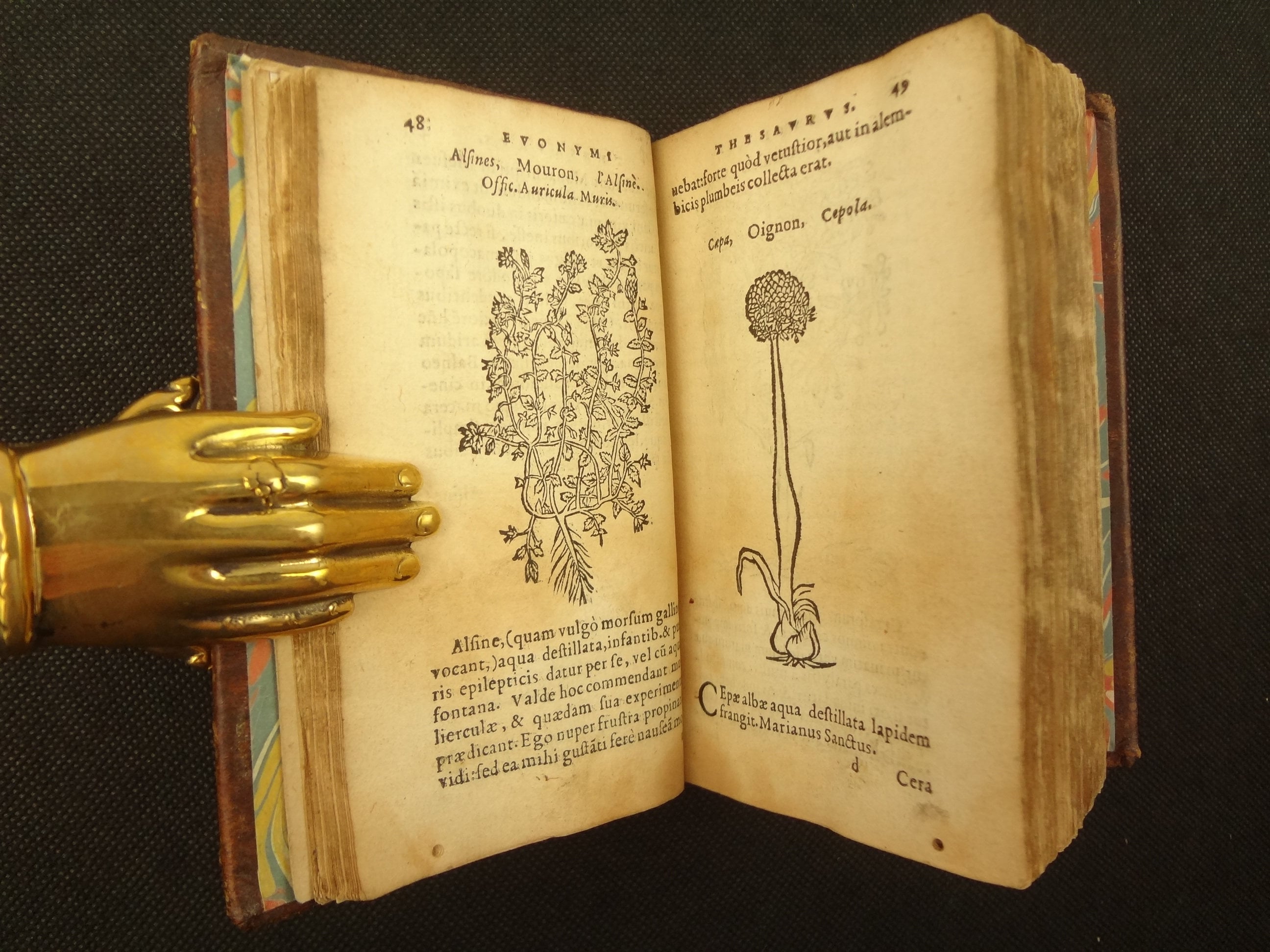 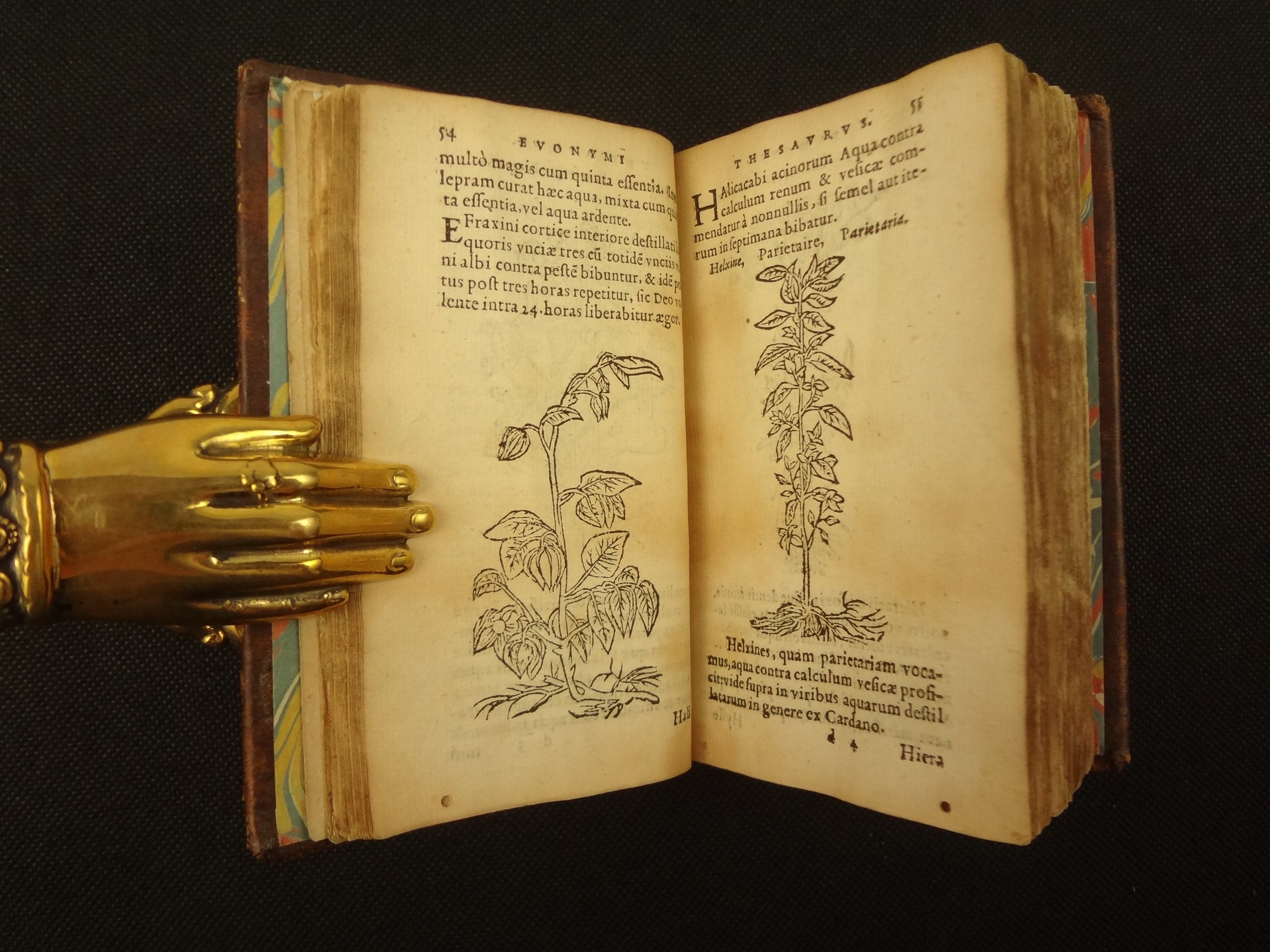 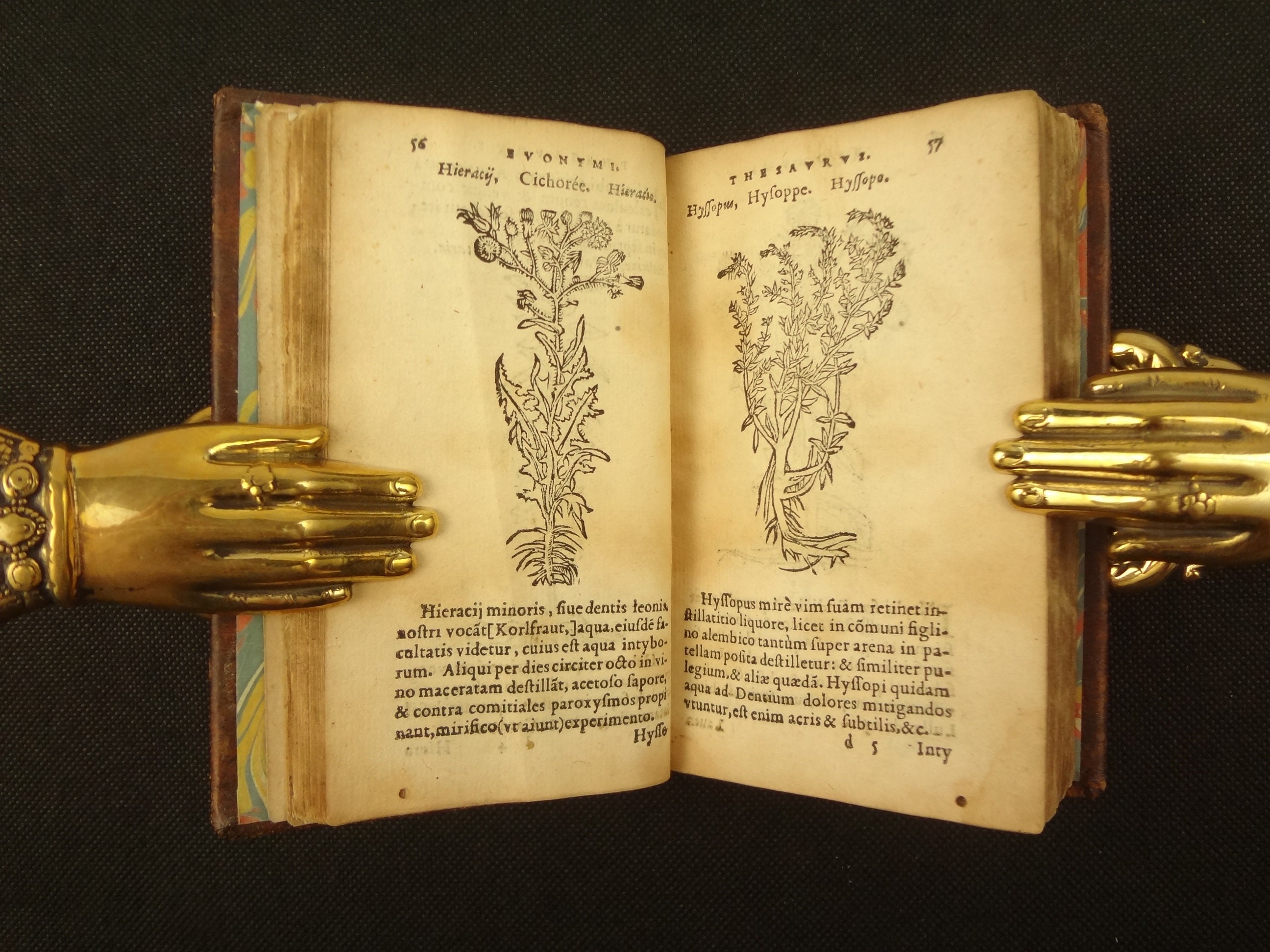 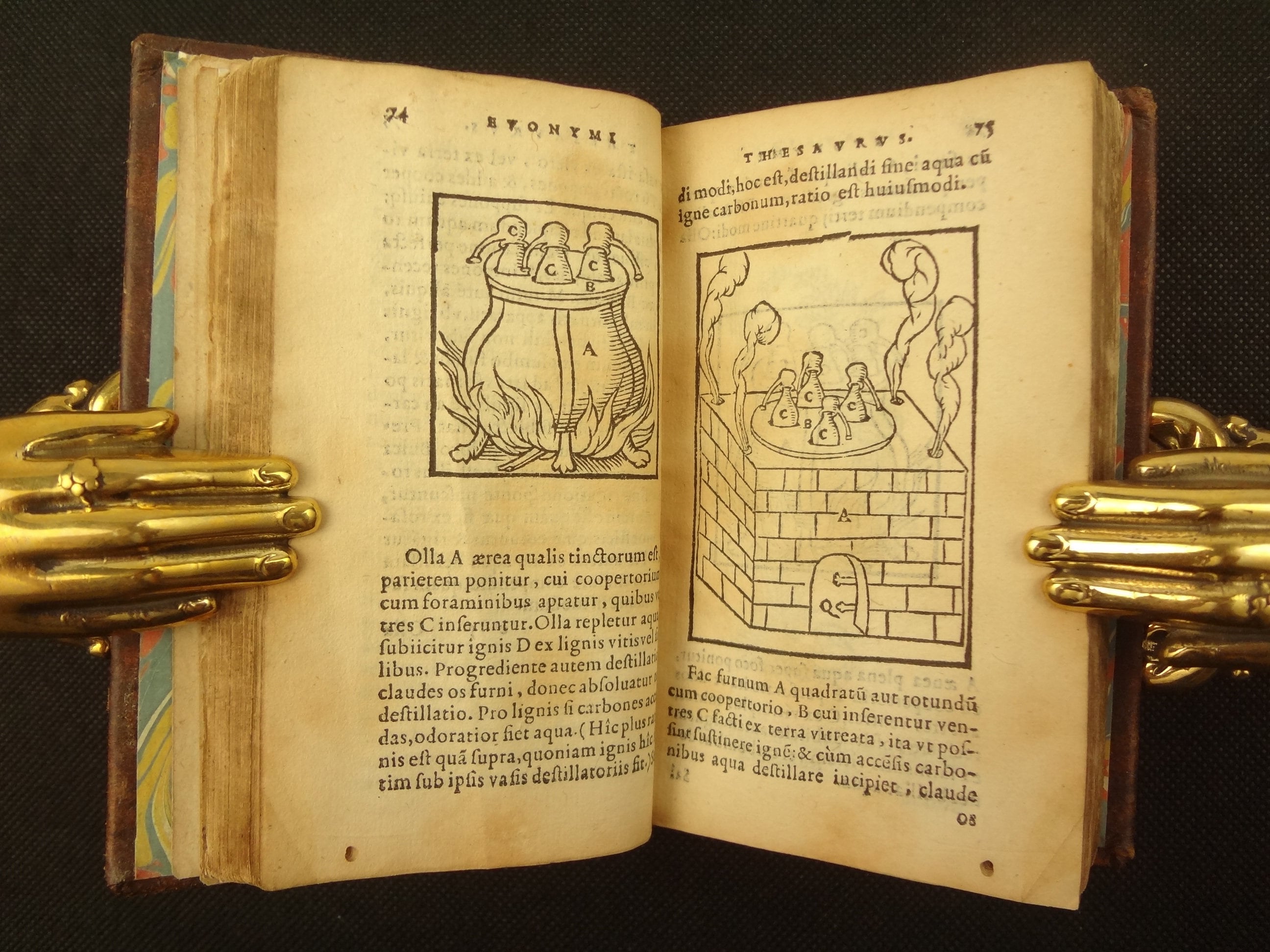 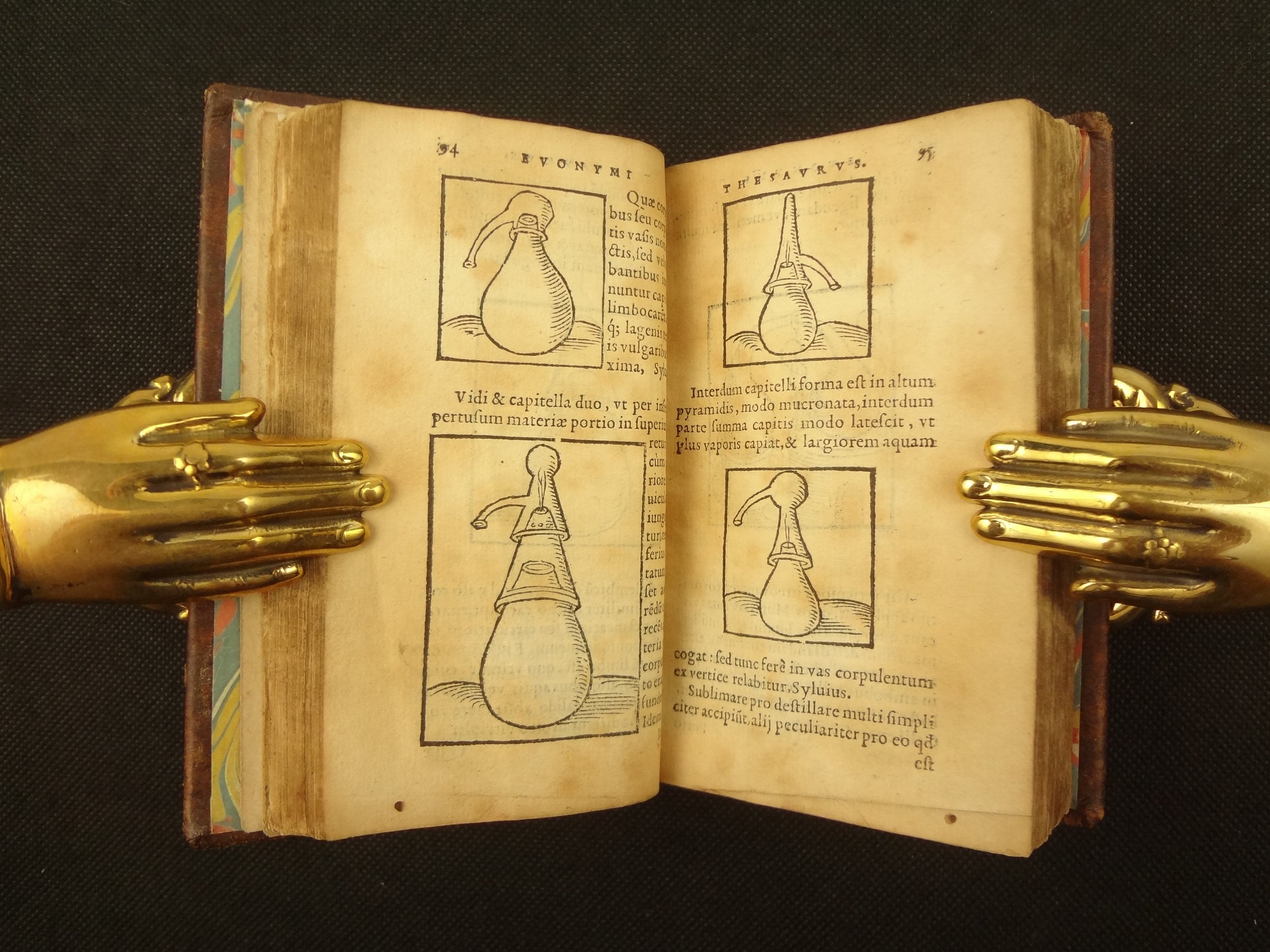 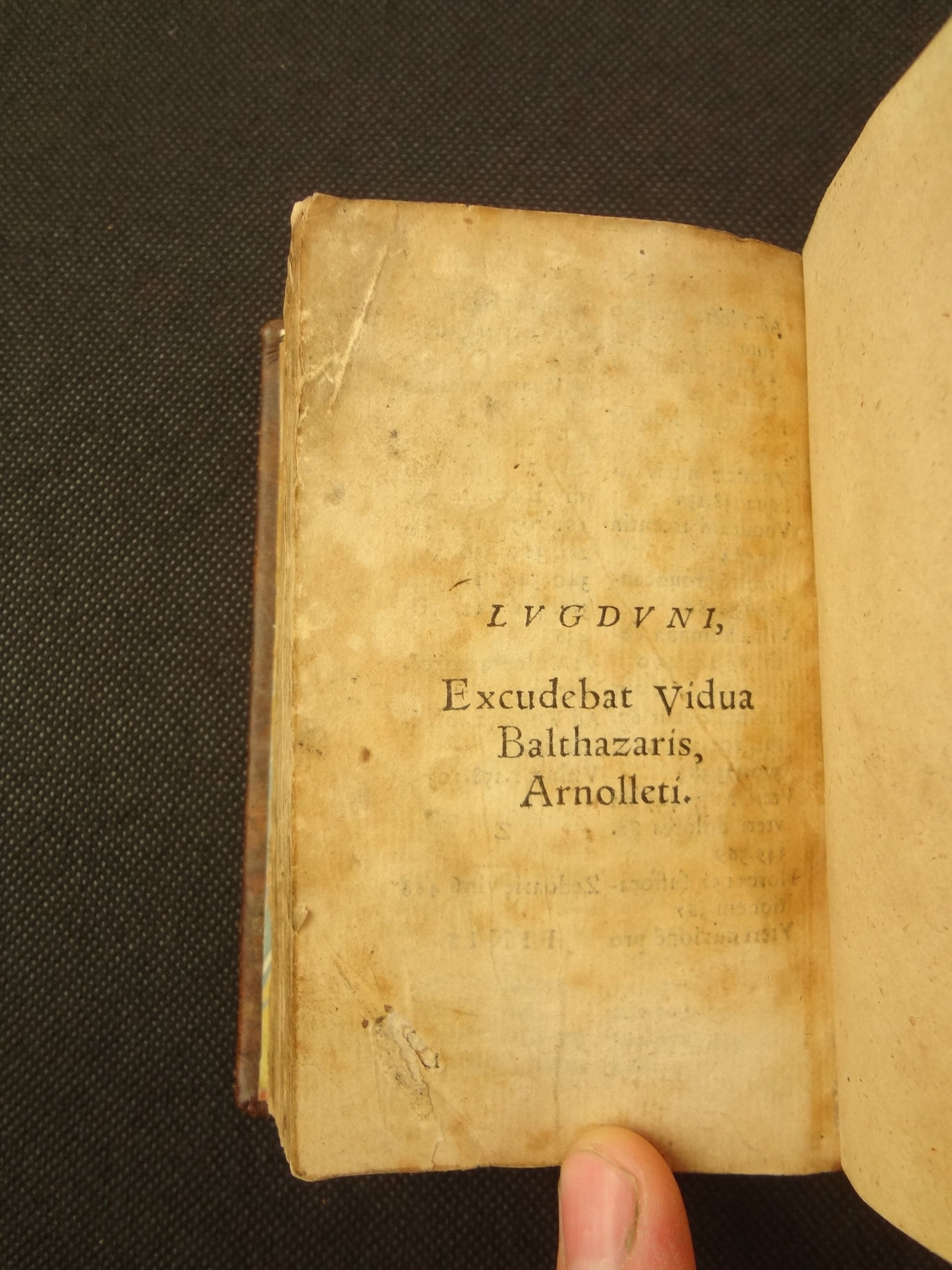 "The book is interesting as a record of the Chemistry known by Gesner, the greatest naturalist, polyhistor and bibliographer of his time. It deals with distillation and is the forerunner of the books of Glauber and French, as it is the successor of those of Brunswicke and Ulstadt . It gives an account of plants to be distilled (with drawings of them), of furnaces and other apparatus, and the methods of getting the virtues out of plants, animals, and minerals, and their uses in effecting cures. It evinces considerable knowledge of practical pharmaceutical chemistry as then practised , especially as the author admits his want of skill in the art. It contains some singular remedies, and some curious ideas." - (p.315, Bibliotheca Chemica, John Ferguson, 1906)

I counted 61 plates; the book collates complete (all pages present). While the furnace depictions are somewhat rudimentary, the plant depictions are attractive.

Gesner issues the book under the pseudonym Euonymi Philiatri because he didn't feel that he commanded the topic as forcefully as he would have preferred. Still, it met with great success immediately undergoing additional editions and translations.

Page 128 includes a recipe for Aqua Vita (vitae), which has gained some fame as the "water of life". "The term was used by the 14th-century alchemist John of Rupescissa, who believed the then newly discovered substance of ethanol to be an imperishable and life-giving 'fifth essence' or quintessence, and who extensively studied its medical properties."

Conrad Gessner (1516 –1565) was a Swiss physician, naturalist, bibliographer, and philologist. Born into a poor family in Zürich, Switzerland, his father and teachers quickly realised his talents and supported him through university, where he studied classical languages, theology and medicine. He became Zürich's city physician, but was able to spend much of his time on collecting, research and writing. Gessner compiled monumental works on bibliography (Bibliotheca universalis 1545–1549) and zoology (Historia animalium 1551–1558) and was working on a major botanical text at the time of his death from plague at the age of 49. He is regarded as the father of modern scientific bibliography, zoology and botany. He was frequently the first to describe species of plants or animals in Europe, such as the tulip in 1559. A number of plants and animals have been named after him.

The colophon (verso of last page) states that this was printed by the widow of Balthazar Arnoullet. The work The Barbou of Limoges (Erin K Lichetenstein, 2014)... reveals that Denise's life was encompassed by printing; her father, Jean Barbou, was a printer, her mother Guillemine was married to a Parisian printer before being widowed and marrying Jean, and their son Hugues also became a printer. Denise, Jean and Guillemine's daughter and Hugues older sister, married Balthazar Arnoullet and issued books as his widow after his death.

One of the last Lyon editions after the first edition. The first edition appeared in 1552 and it rapidly went through a handful of editions. This is the third Arnoullet edition, after a quarto in 1555, and another octavo in 1557.