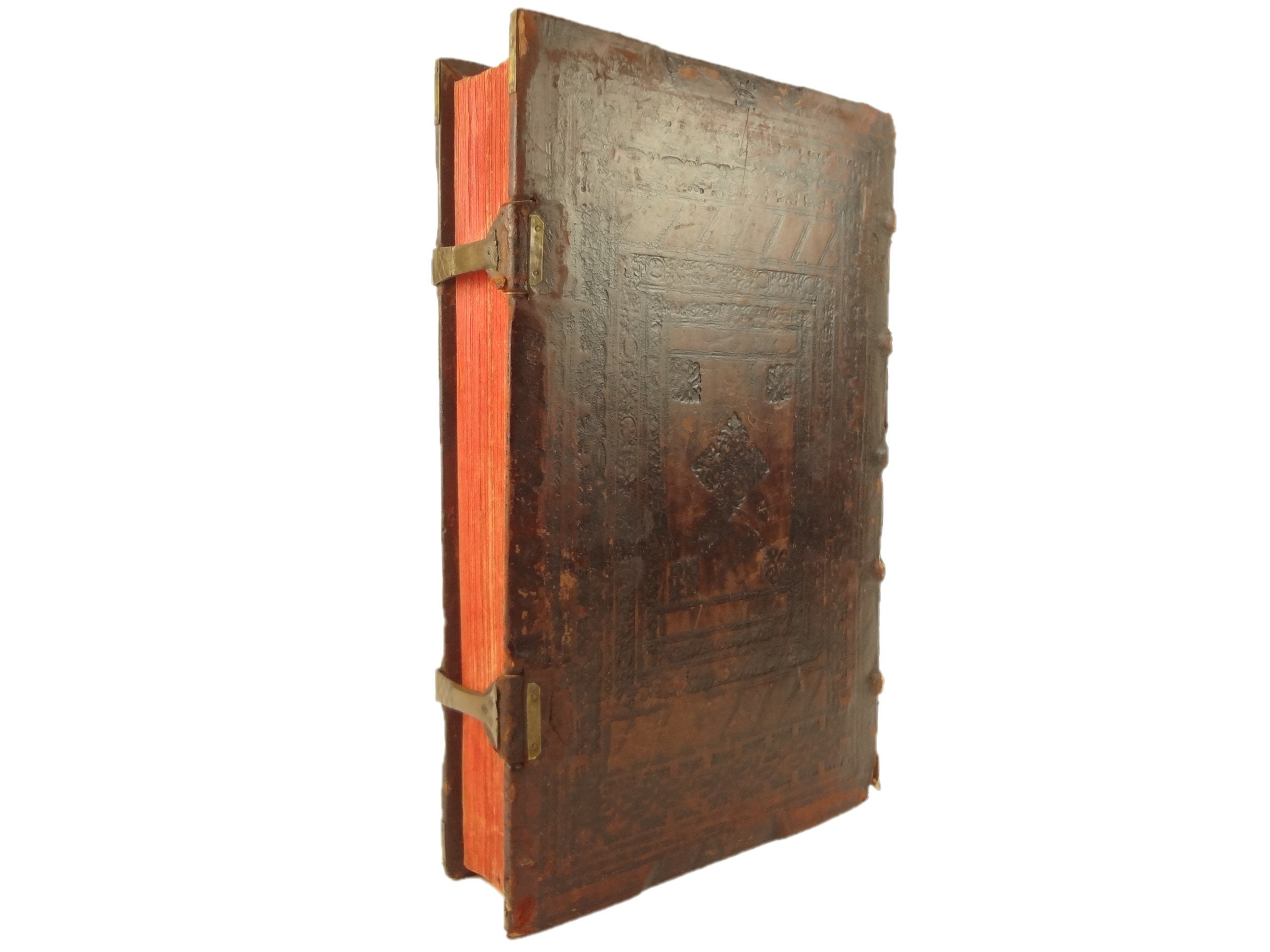 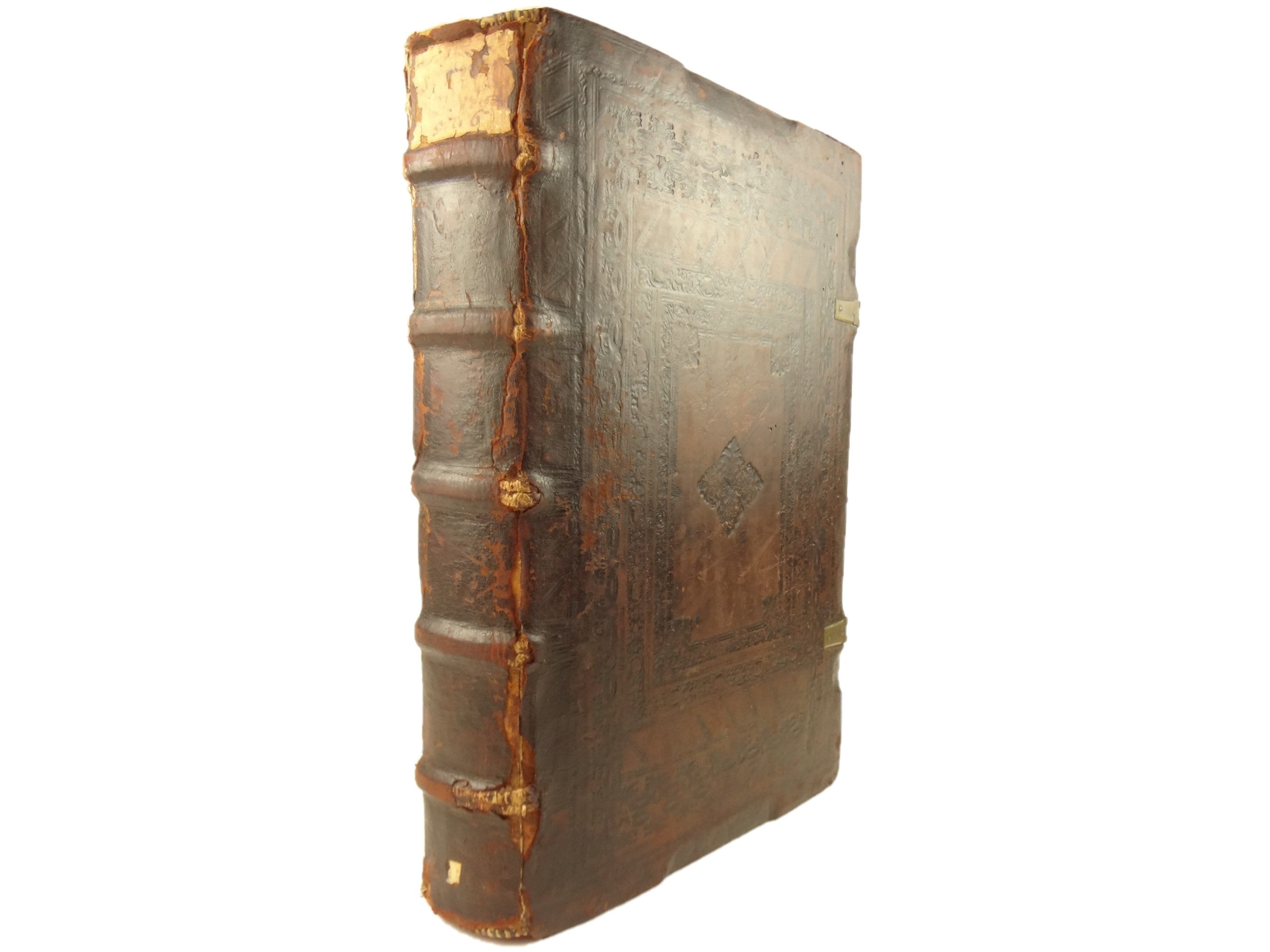 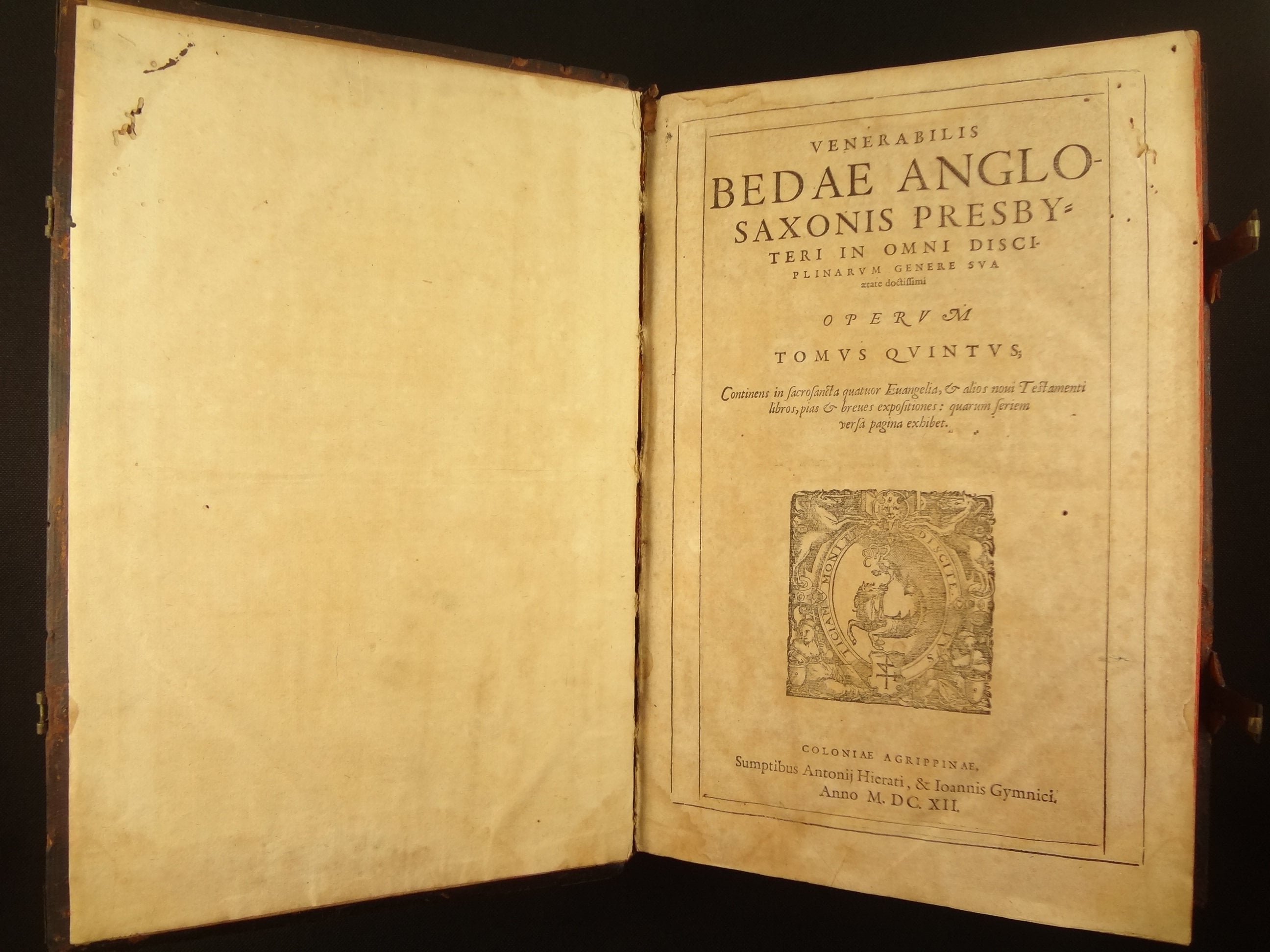 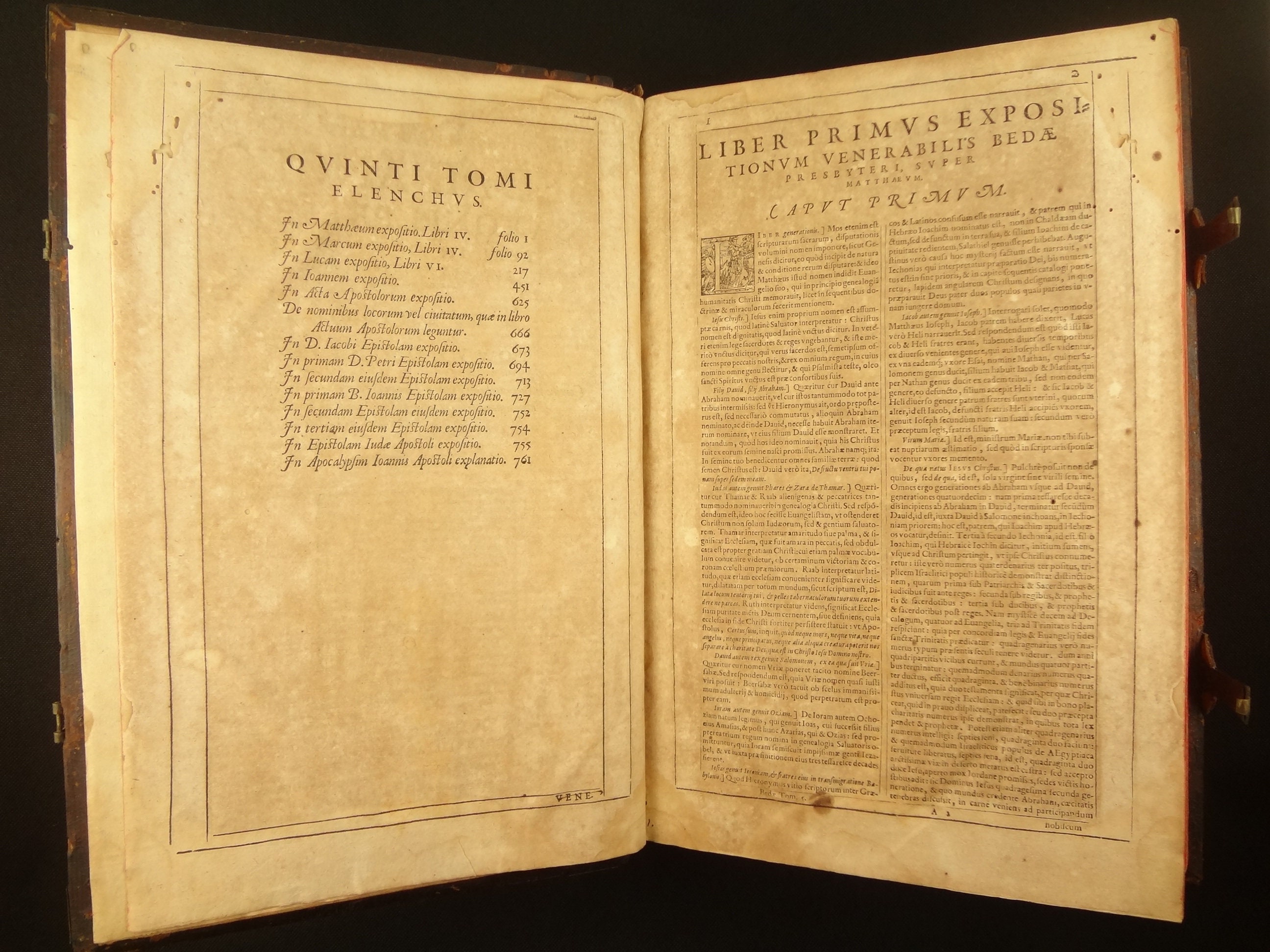 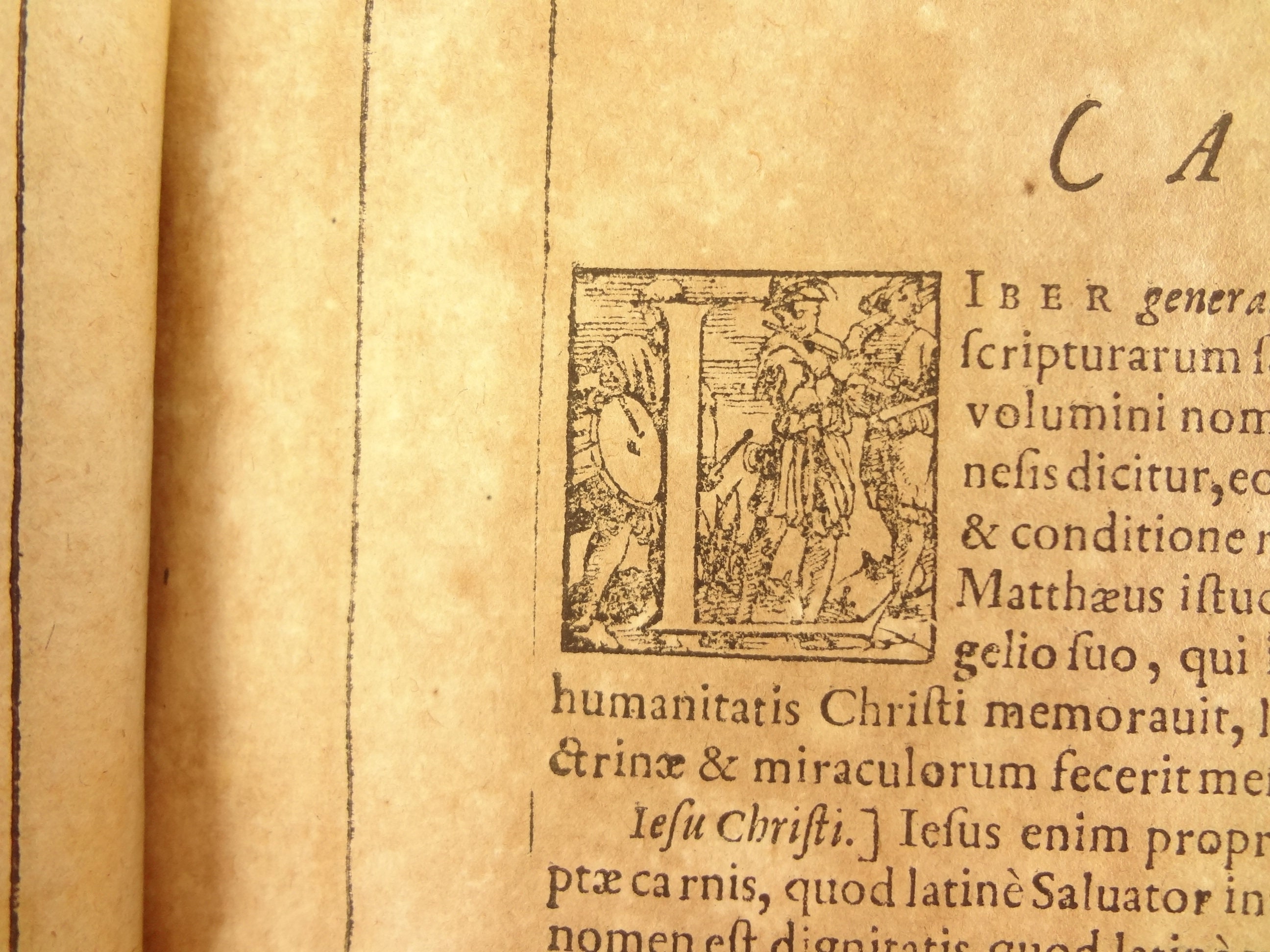 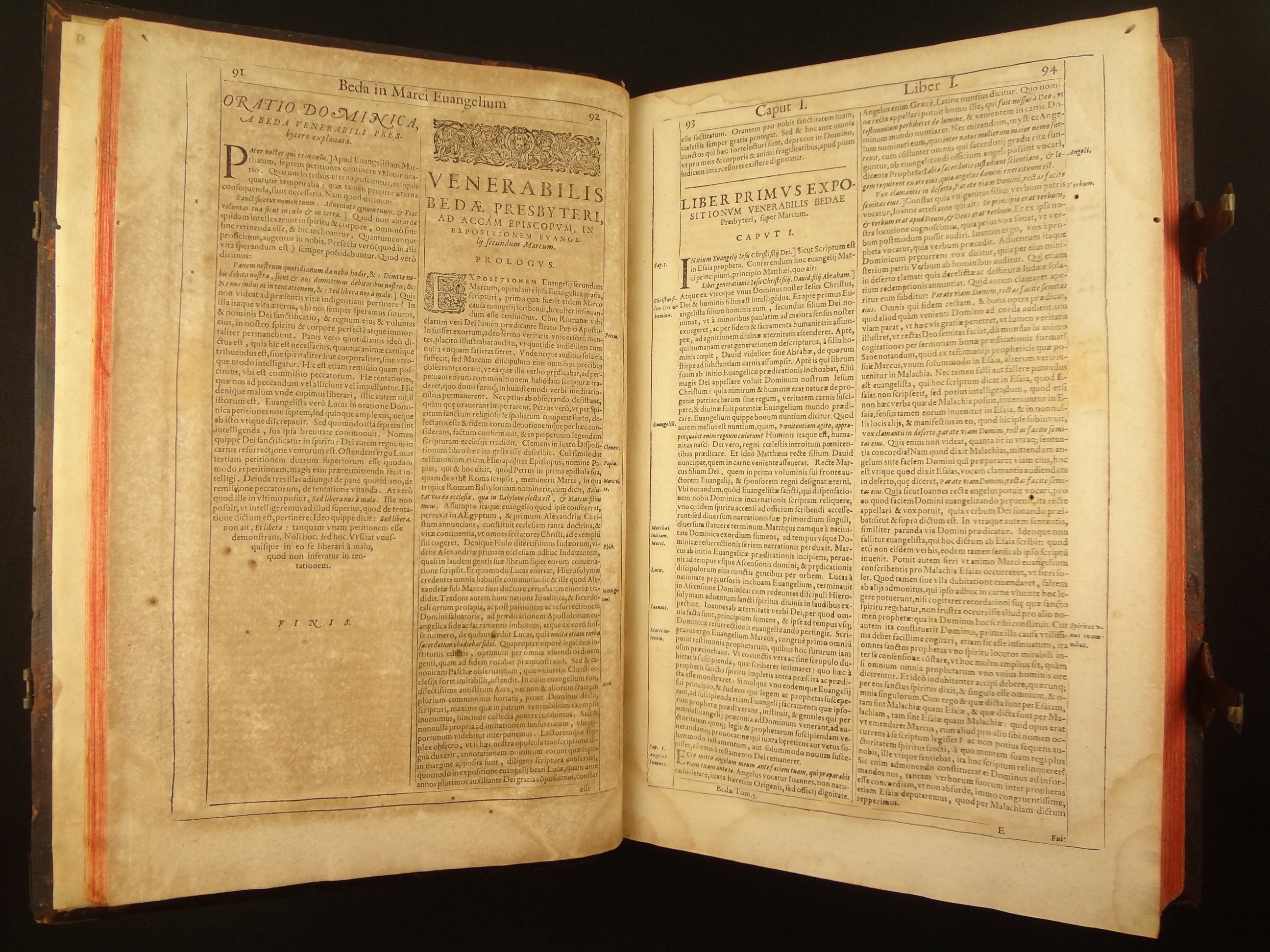 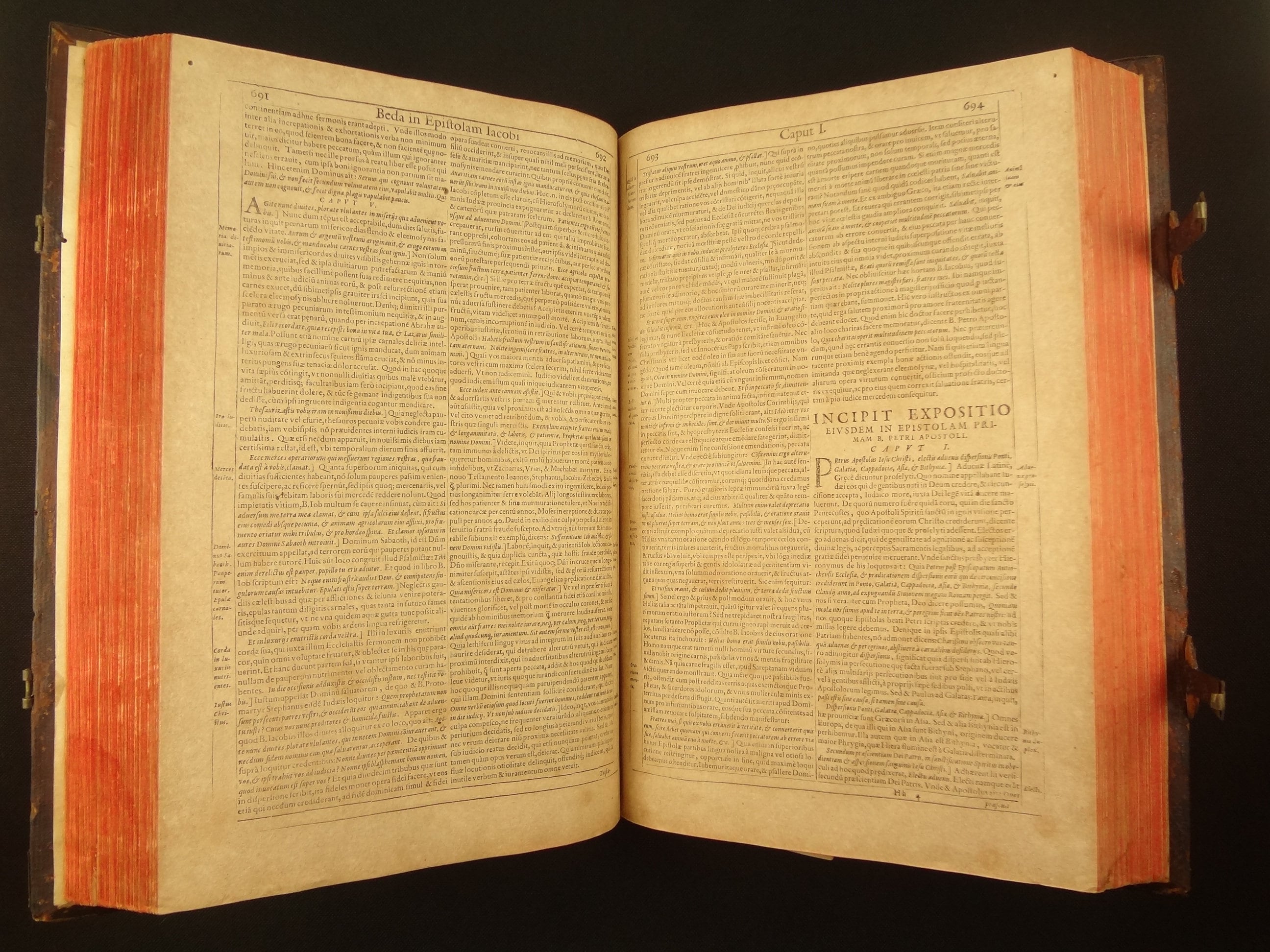 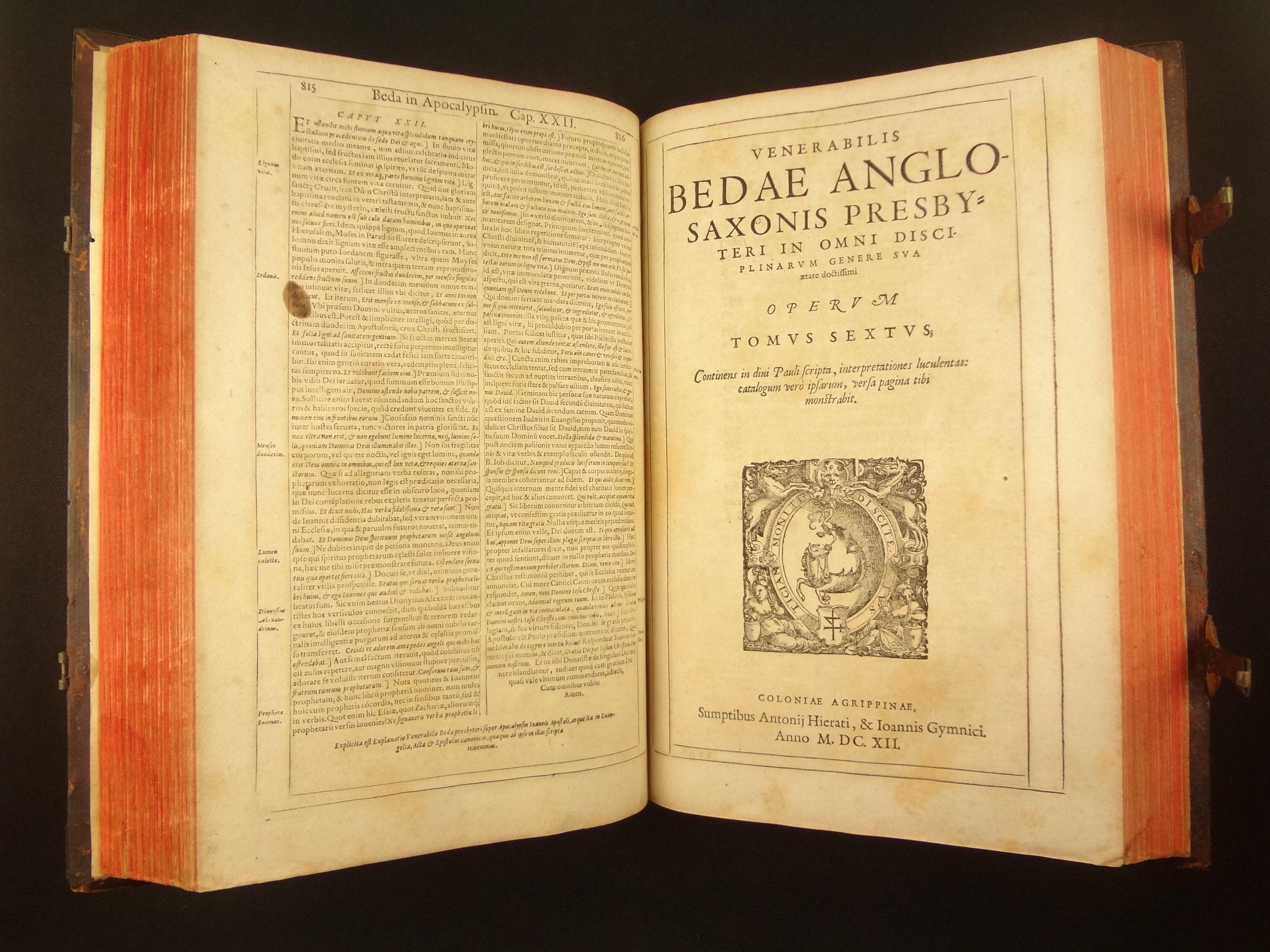 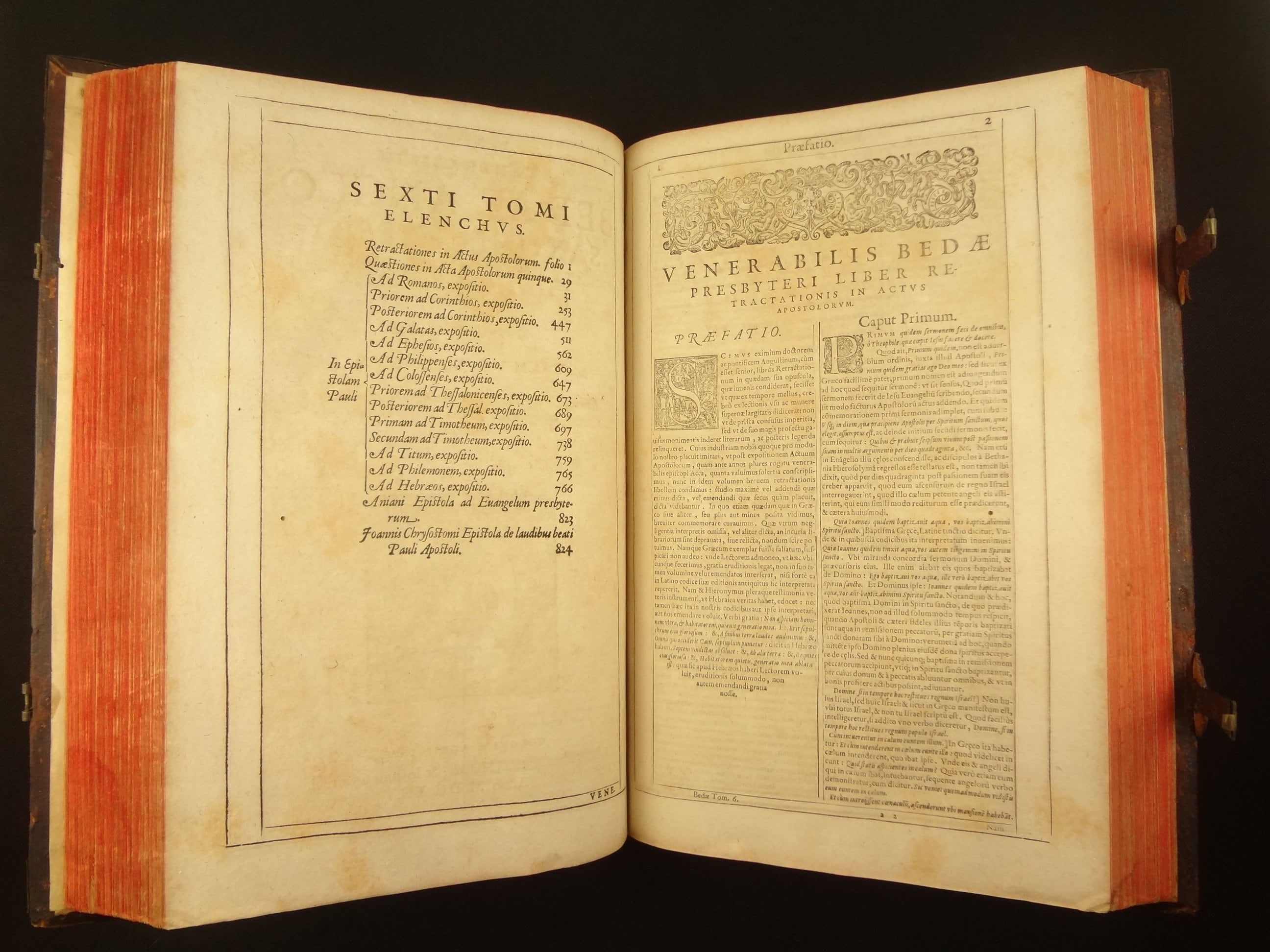 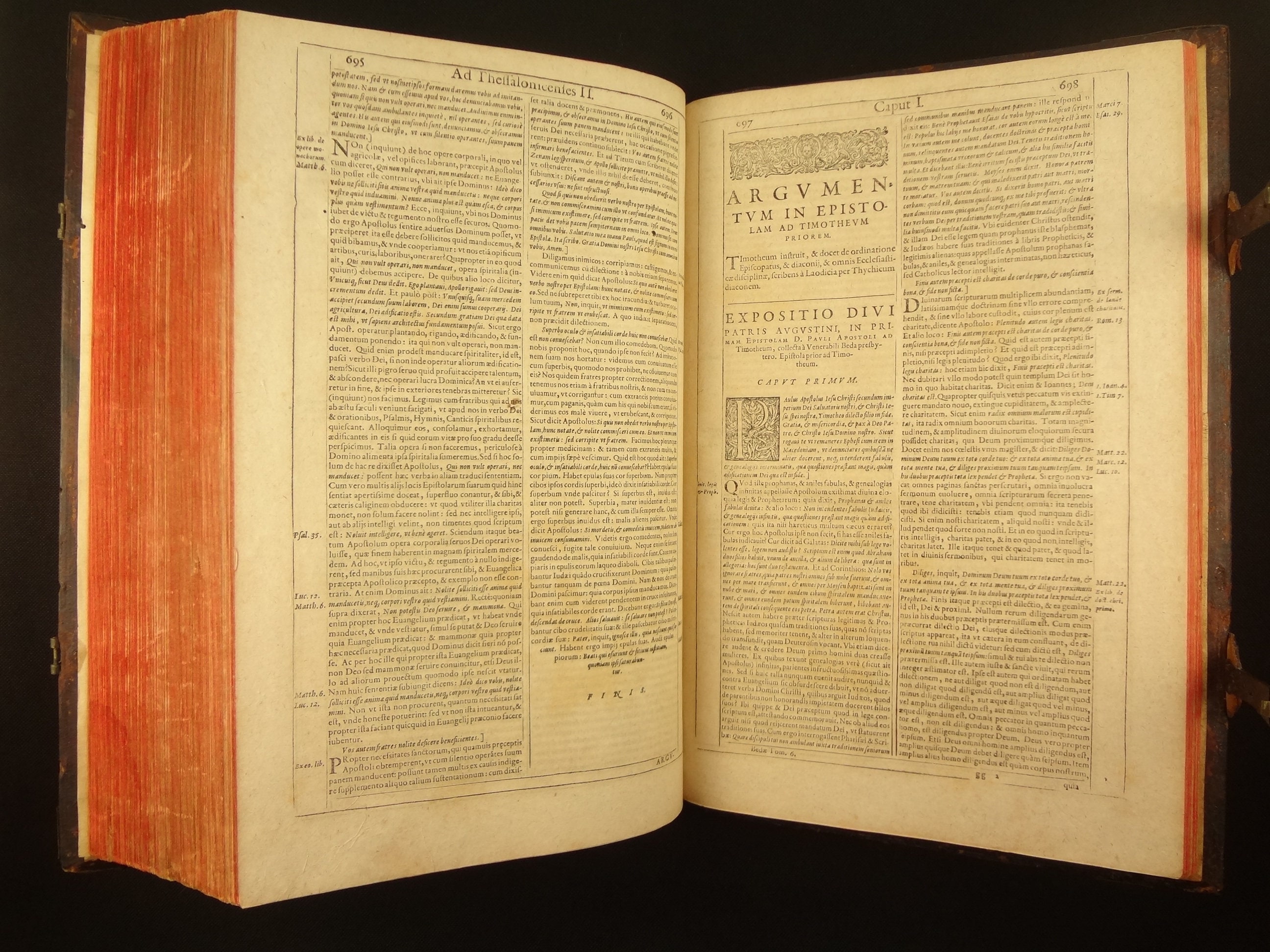 Two tomes, in one handsome binding with functioning closure clasps, Tomus V and VI the Opera (Works) of Bede, printed in 1612. Notable for its (likely) contemporary beveled wood binding and corner hardware.

Printed in 1612 as the full works of Bede, this is the fifth and sixth "tome". Tome V is Bede's commentaries on the Gospels, Acts, and the shorter letters, "breves expositiones" (Peter, 1-3rd John, Jude, Revelations, etc). Tome VI focuses on the Pauline works, with Bede's commentary on Galatians, Ephesians, Philippians, etc.

The binding is a real draw here, showing the craftsmanship which William Morris so adored. The boards are made of true wood, beveled at certain areas. The boards are stamped in blind, with (likely) the heads of the reformers forming one frame. The closure hardware still works, and most of the corner brass is present. While the joints are cracked, that only serves to expose the massive and impressive bands used to bind the work, and the handsome two-color endbands. A partial library plate, in one compartment of the spine, written in an old-hand, gives further character to this impressive period piece.

About the Venerable Bede -

Bede (672/3 – 735), also known as Saint Bede, The Venerable Bede, and Bede the Venerable (Latin: Beda Venerabilis), was an English monk at the monastery of St Peter and its companion monastery of St Paul in the Kingdom of Northumbria of the Angles (contemporarily Monkwearmouth–Jarrow Abbey in Tyne and Wear, England).

Born on lands belonging to the twin monastery of Monkwearmouth–Jarrow in present-day Tyne and Wear, Bede was sent to Monkwearmouth at the age of seven and later joined Abbot Ceolfrith at Jarrow. Both of them survived a plague that struck in 686 and killed a majority of the population there. While Bede spent most of his life in the monastery, he travelled to several abbeys and monasteries across the British Isles, even visiting the archbishop of York and King Ceolwulf of Northumbria.

He was an author, teacher (Alcuin was a student of one of his pupils), and scholar, and his most famous work, Ecclesiastical History of the English People, gained him the title "The Father of English History." His ecumenical writings were extensive and included a number of Biblical commentaries and other theological works of exegetical erudition. Another important area of study for Bede was the academic discipline of computus, otherwise known to his contemporaries as the science of calculating calendar dates. One of the more important dates Bede tried to compute was Easter, an effort that was mired in controversy. He also helped popularize the practice of dating forward from the birth of Christ (Anno Domini—in the year of our Lord), a practice which eventually became commonplace in medieval Europe. Bede was one of the greatest teachers and writers of the Early Middle Ages and is considered by many historians to be the most important scholar of antiquity for the period between the death of Pope Gregory I in 604 and the coronation of Charlemagne in 800.

Two Tomes in one binding, Tomes V and VI.