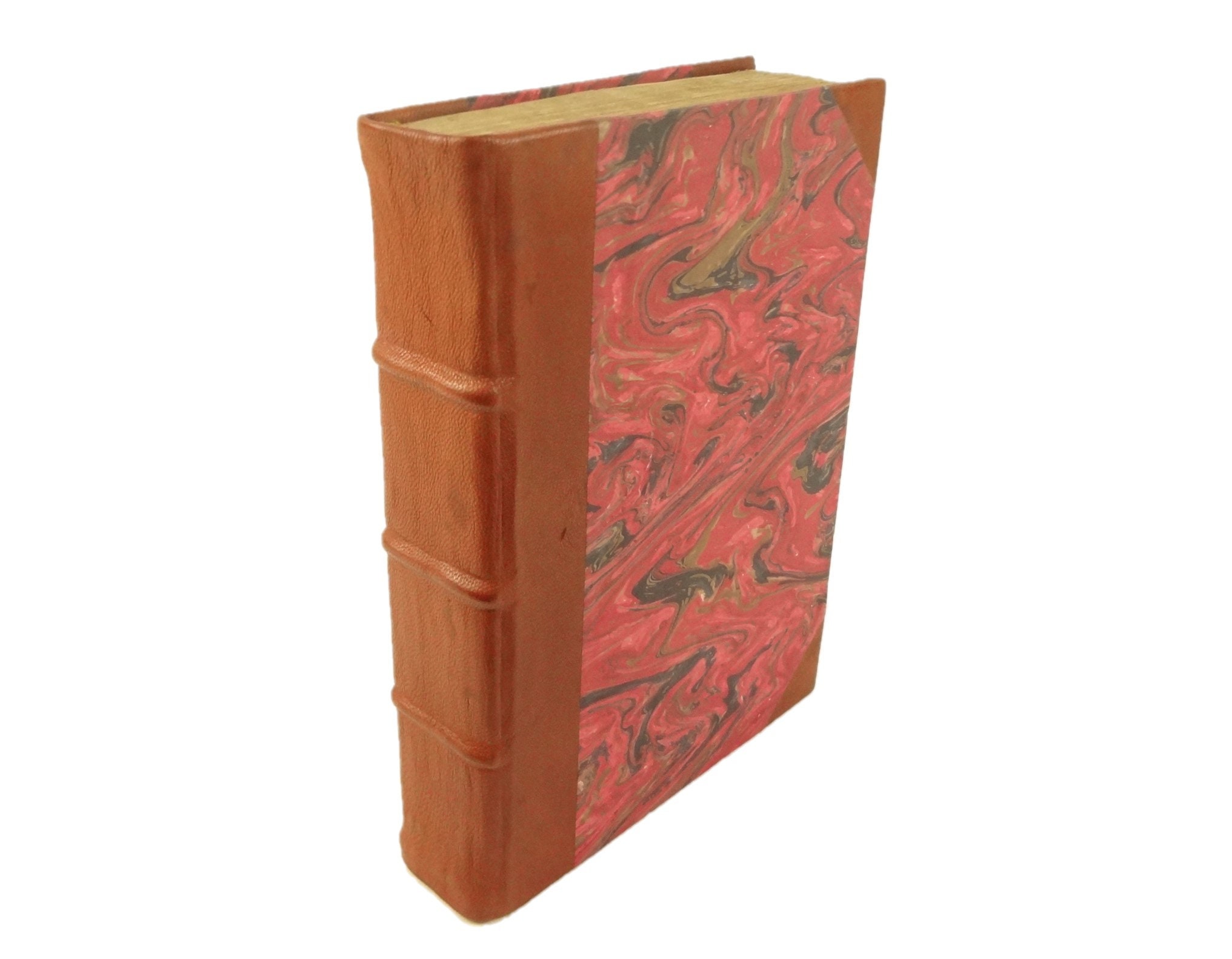 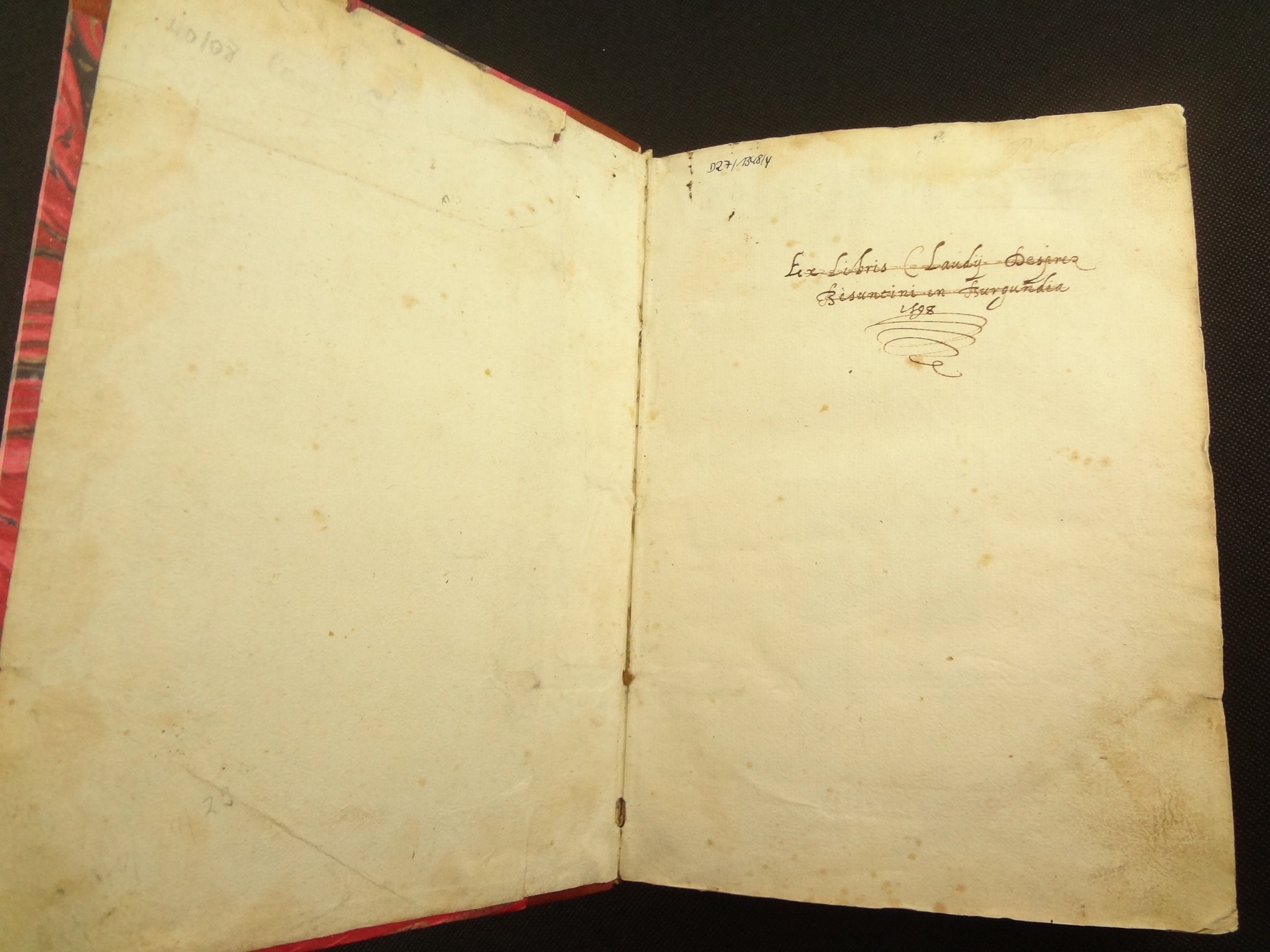 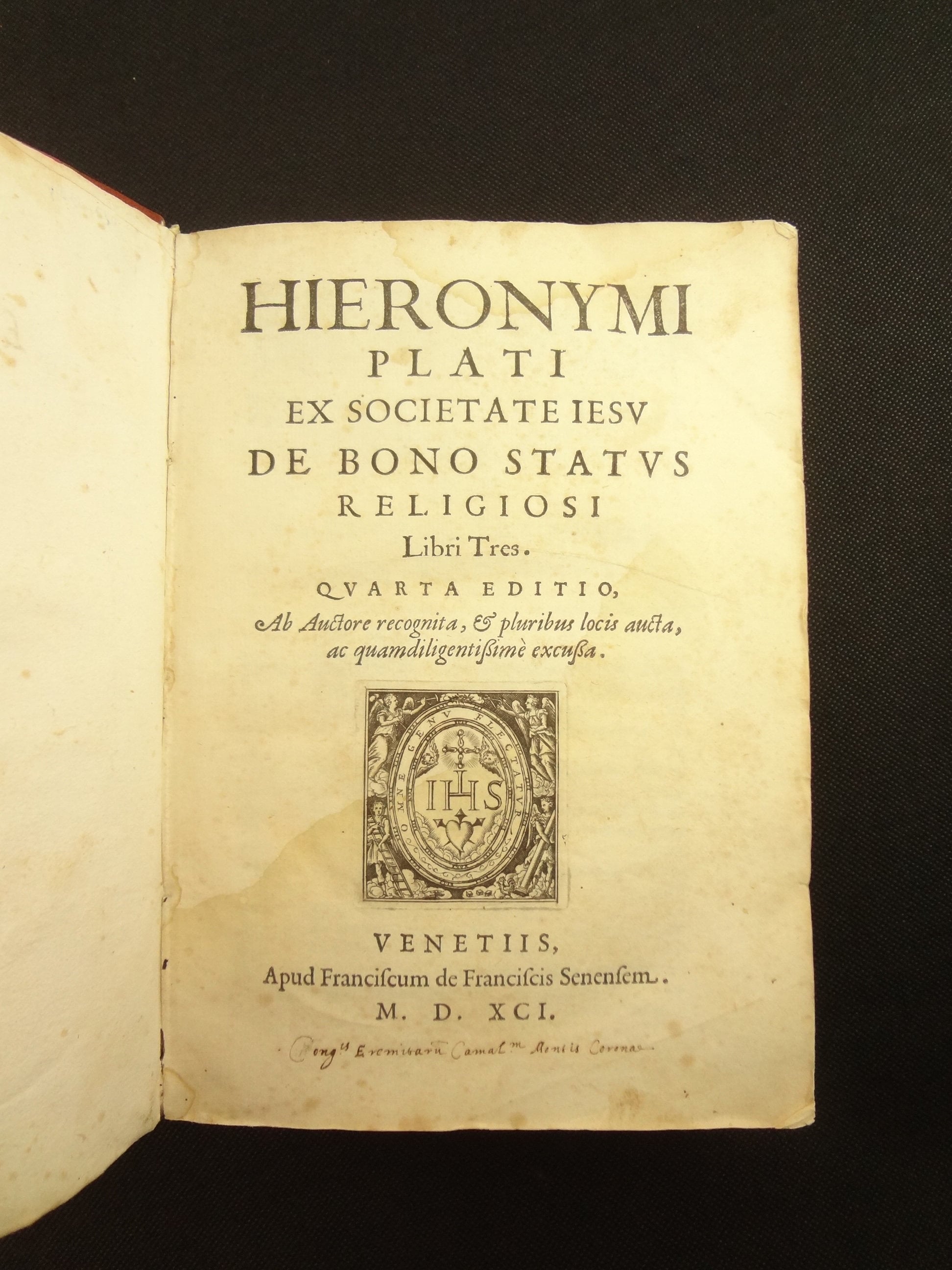 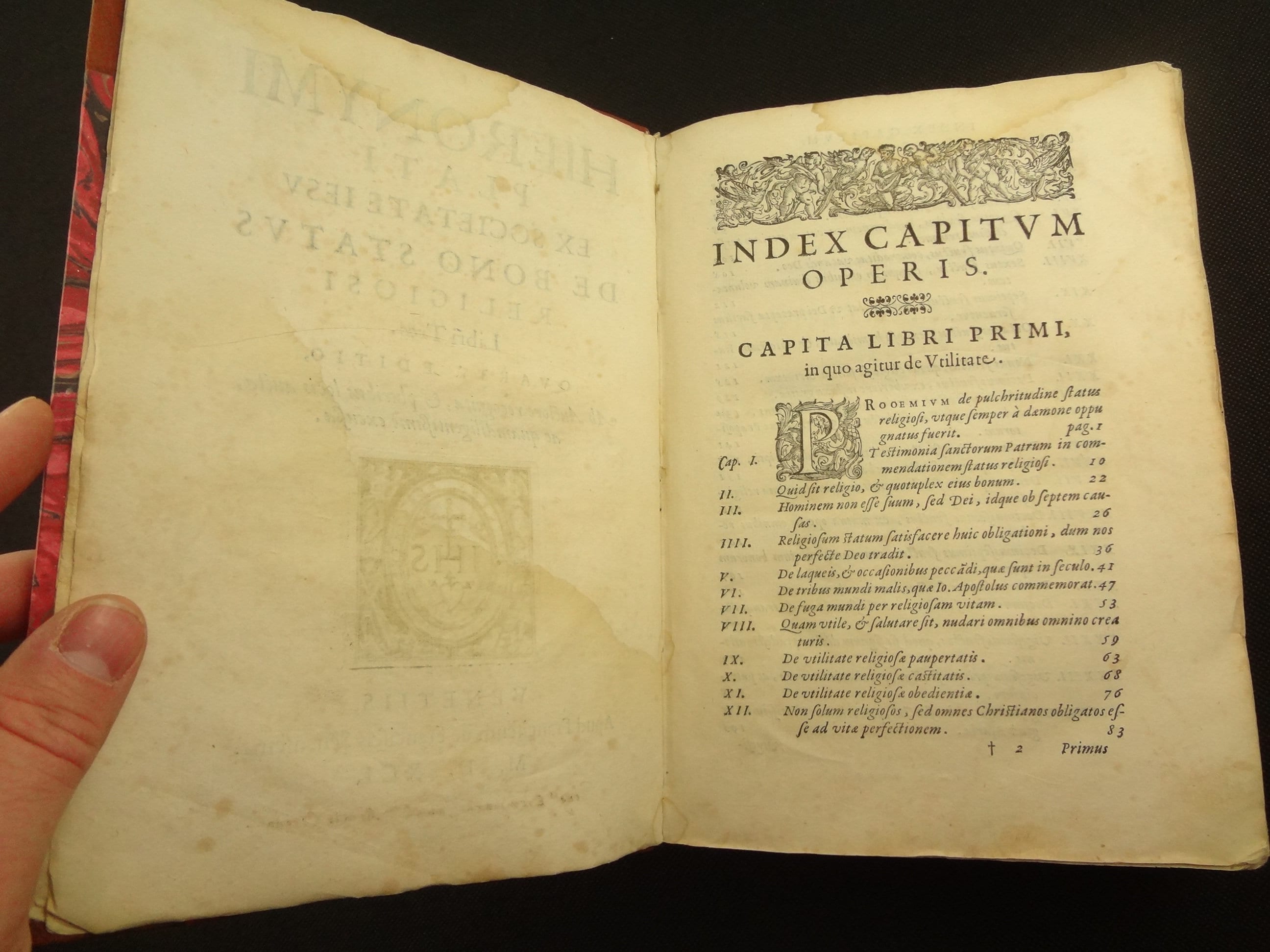 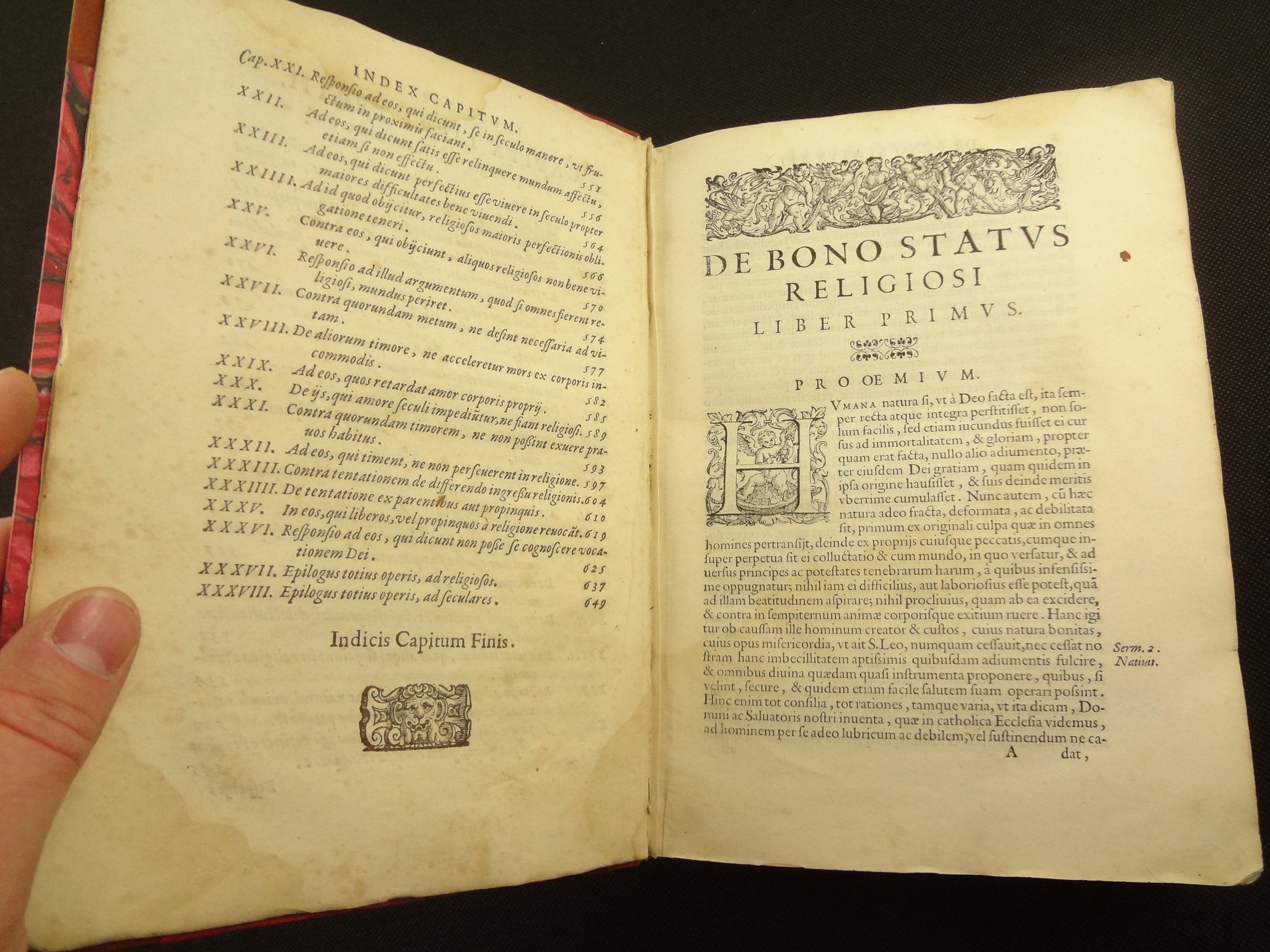 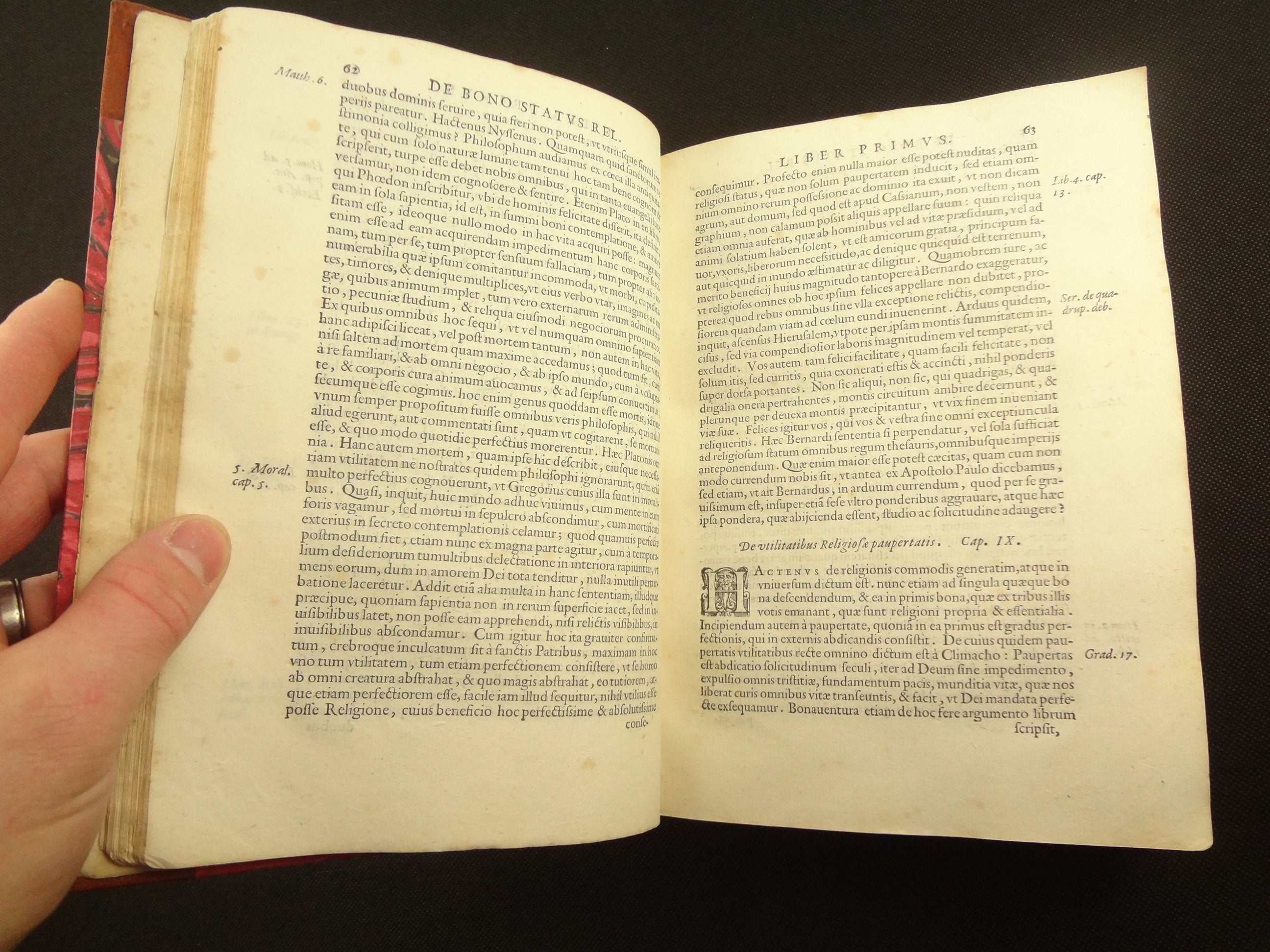 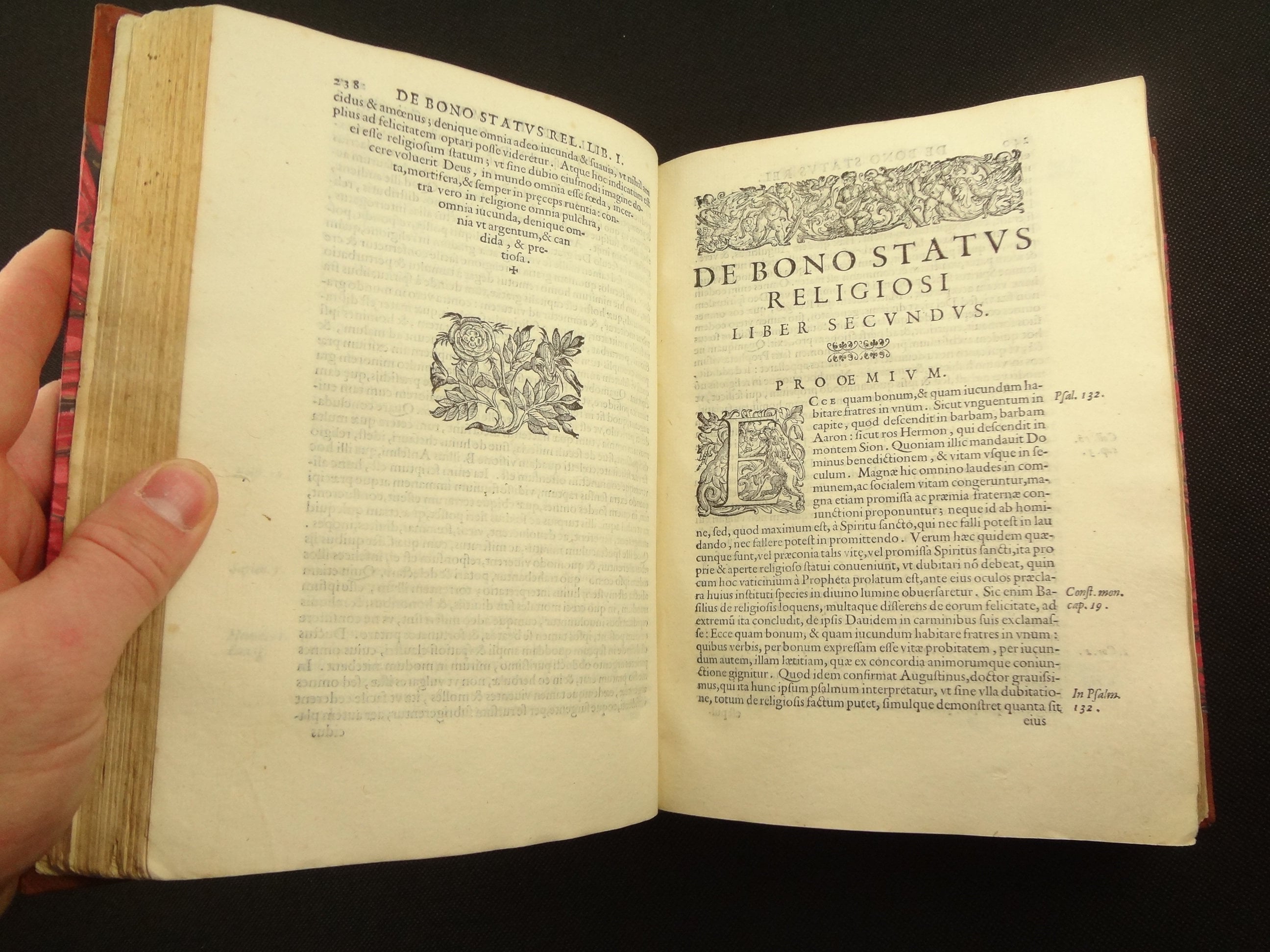 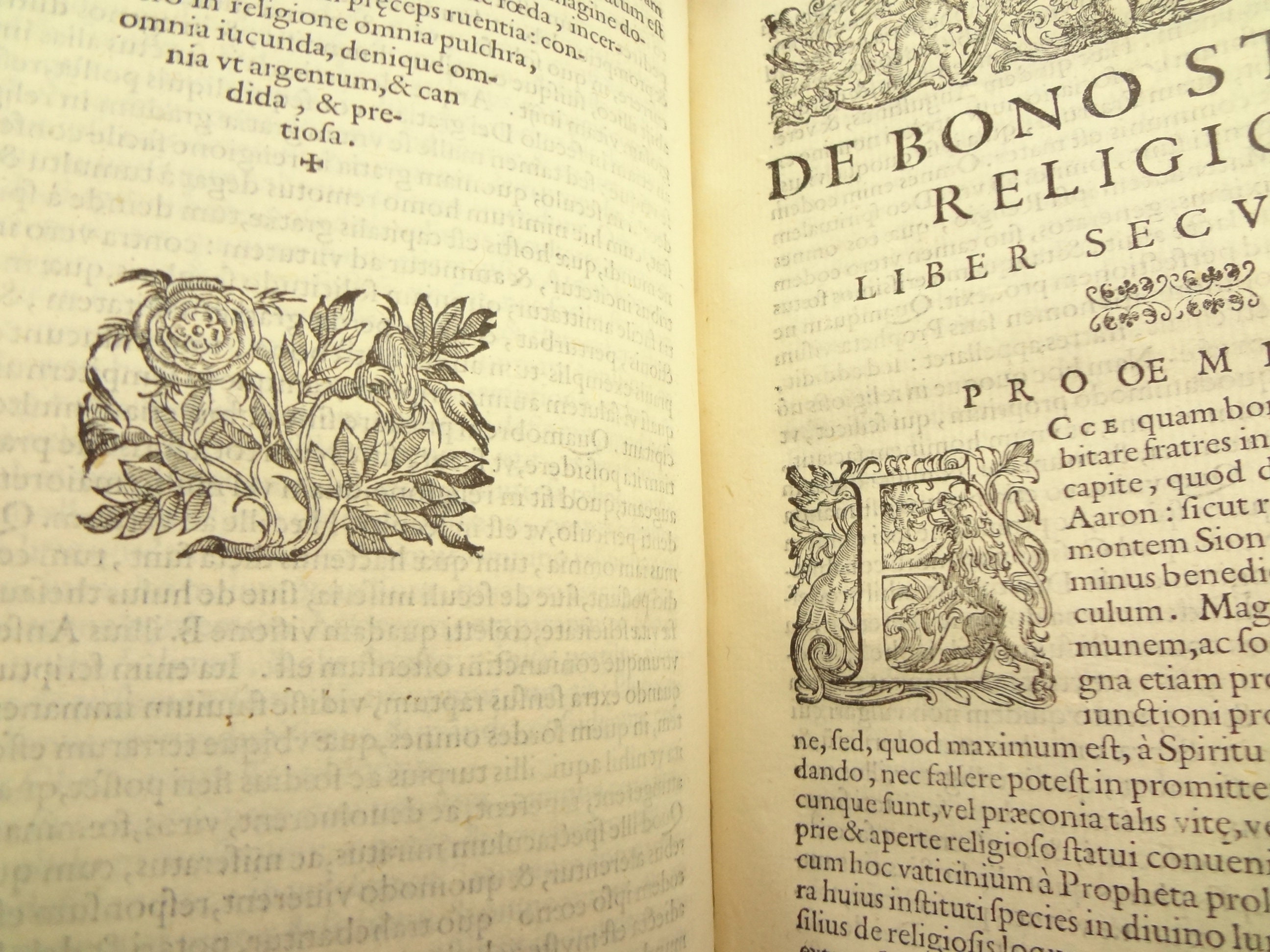 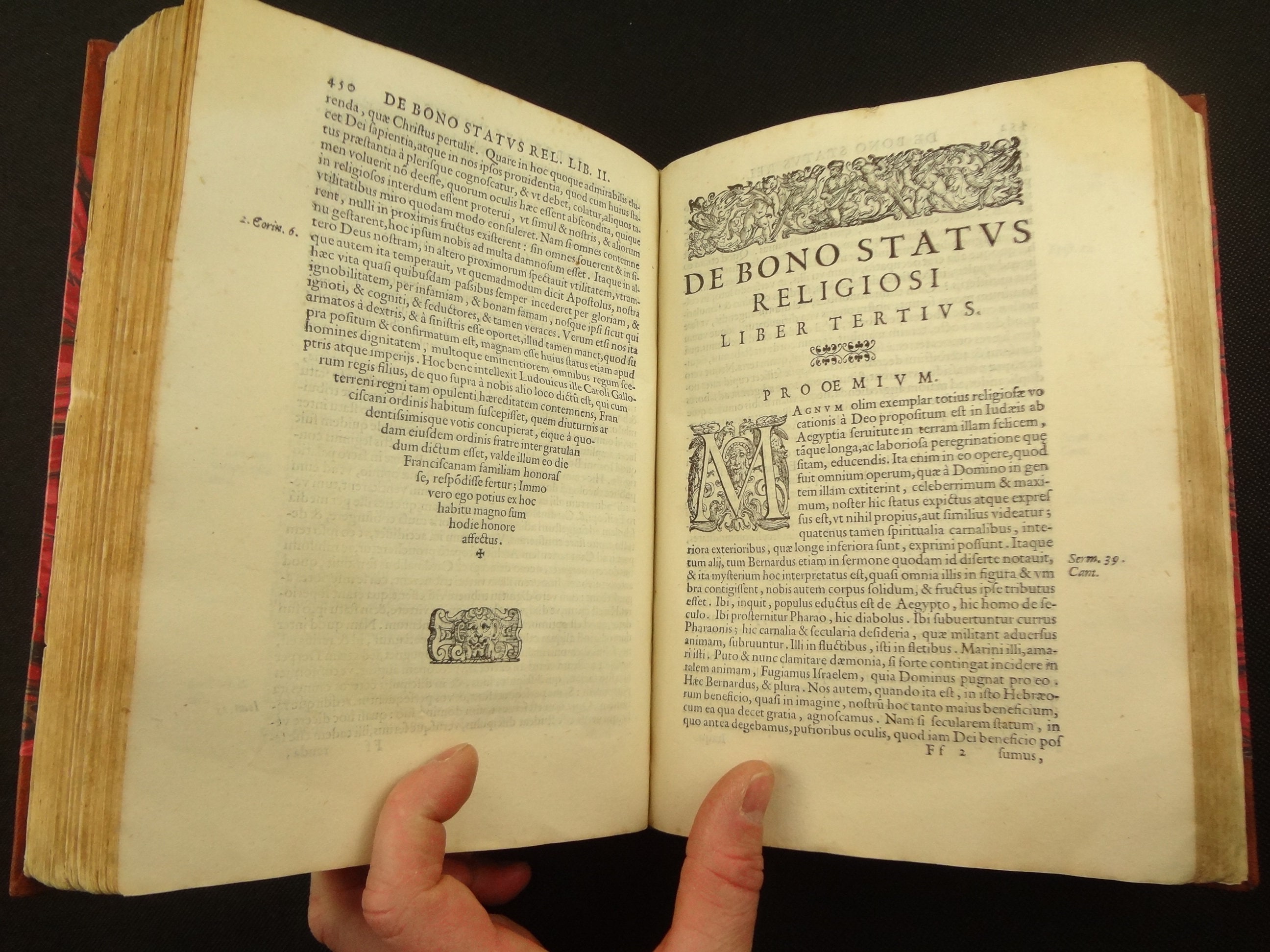 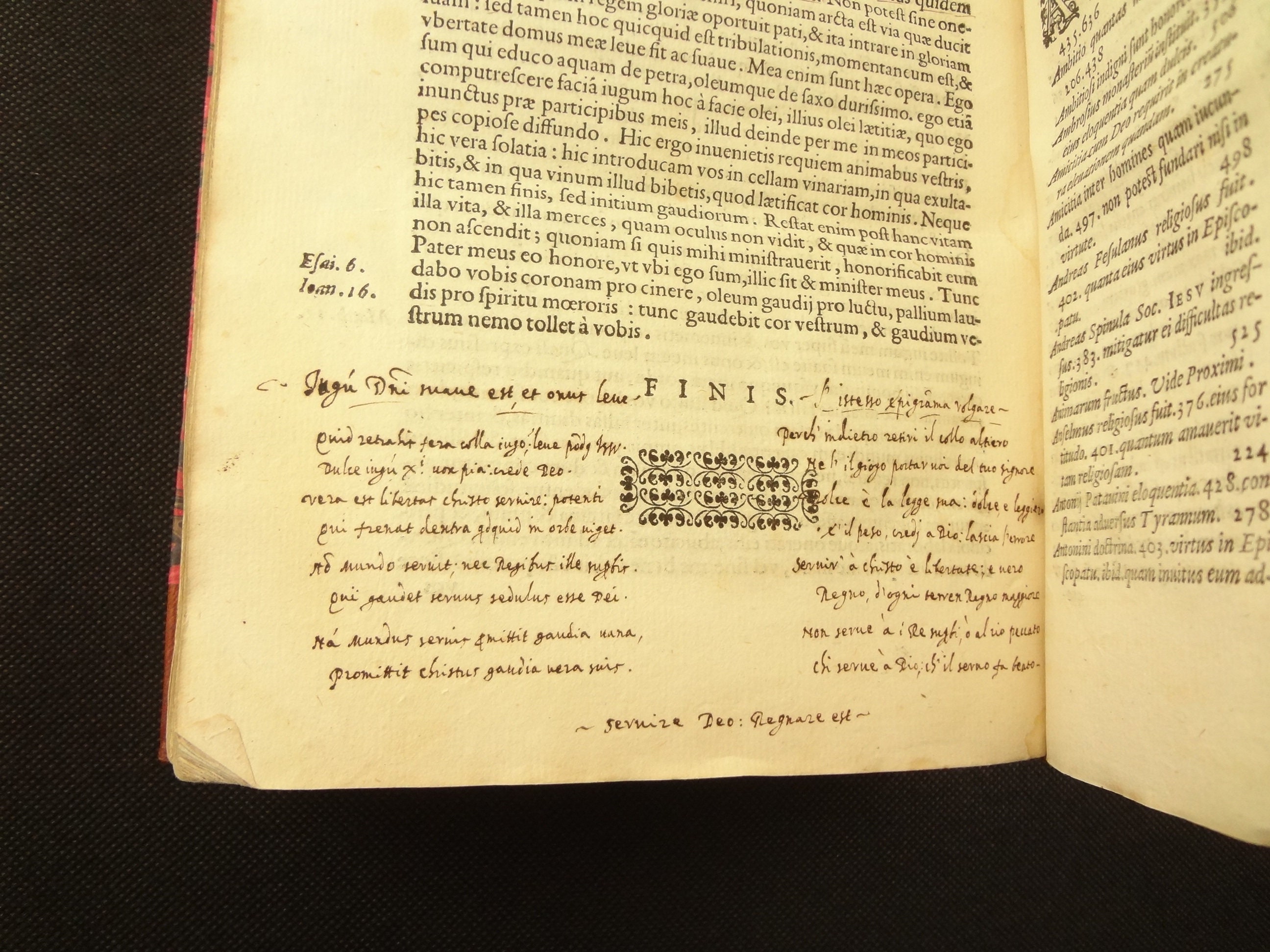 A colorful binding housing a unique Jesuit work detailing the glorious nature a religious state might offer. Once belonging to a Carmelite hermitage in Italy, this beautiful work can now grace your libraries shelves. Written in Latin, the author is noted for his strong & beautiful use of the language, as well as his ability to quote fathers of the church and the Bible.

19th Century Review of the Book

In 1868 Patrick Mannock authored commentary for De Bono Status Religiosi (which can be seen at https://play.google.com/store/books/details?id=jJVeAAAAcAAJ) providing the following introduction to the book:

“A valuable old work, entitled, The Happiness of a Religious State, ﬁrst written in Latin by one of the Jesuit Fathers, and translated into English in 1632 ; a perfect cyclopaedia of itself on that all important subject. The gifted and, most likely, sainted author quotes largely from the Fathers and Doctors of the Church, as well as from a great number of other ancient writers, eminent for learning and holiness of life. His own reasoning is also terse and conclusive, and such as might be expected from so learned a source, where nearly every chapter abounds with so many passages from the Sacred Scriptures, the writings of the ancient Fathers and others. “

“The Work is divided into three books, in one quarto volume. But ﬁrst we had better give the last paragraph of the preface to this book, premising that the translator’s style, though antique, will be found clear and impressive, and that the subject is of such importance as to deserve to be perused with deep and intense interest.”

“’Having therefore, ‘ he says, ‘ discoursed in the two preceding books of the advantages, the excellence, and the dignity of a Religious life, we will now, in this third book, show the pleasure which is found in it that every body may see, that all kind of happiness and perfection attend it. And we have somewhat more reason to enlarge on this subject of the sweetness of a Religions state, because it is generally less known; and secular people hardly believe there can be any pleasure in such a life. They will easily grant that a Religious life is an excellent course ; and much more easily will they grant that it is a proﬁtable and safe kind of life for the soul ; but as for pleasure, they utterly deny there is any in it, and rather conceive it to be extremely harsh and full of insupportable difﬁculties. This error, we have here undertaken to confute, and to prove, that this state is not only pleasant but much more so than a secular life. St. John Chrysostom often spends his eloquence in commendation of a Religious course, and particularly in one of his homilies on St. Matthew, he prefers by far the sweetness of it, to the pleasures of the world, and held in the greatest esteem among worldly-minded people ; to the pageants which were wont to be represented publicly in the Theatres at great cost, and to animal pleasure ; showing clearly that there is as much difference between these two kinds of life and delights, as between the harmony of the Quires of Angels sweetly singing, and hogs in their ﬁlth confusedly grunting. And because the cruel and unrelenting Pharoah, (the avowed enemy of man,) never ceases to pursue and molest those that ﬂy from the servitude of the world into the Desert of Religion, either by himself or his followers, armed with weapons of his own forging, we will disarm and take away all the weapons we can from him and them, and show that the deceitful reasons and fallacies with which they are wont to pervert men’s judgments, are of no force or solidity ; to the end that drowning our enemies in the Red Sea, all 'devout souls that either purpose to get out of Egypt or have already got loose and forsaken it, and arrived in the Desert of this happy Land of Promise, may enjoy the pleasures thereof with more satisfaction of mind, and more com posed assurance.’”

Provenance of this Book

Under the publisher info on the title page in manuscript hand, “Cong.s Eremistaru’ Camal. m Montis Coronae”. This is reference to the Carmelite site on Mount Corona. A fascinating community and provenance.

“Camaldolese Hermits of Monte Corona was established by the Renaissance reformer, Paolo Giustiniani. This group lives solely in hermitages, usually with a very small number of monks comprising the community.” - Wikipedia

Condition of this Book

Rebound as a ¼ leather with marbled board. Not a recent rebind as it shows signs of wear and aging. Quite pretty, for lack of a better work. The purple marbling is bright and exquisite. There are a couple of scratches on the back board. The leather shows an occasional spot.

Inside the original paste-down, or an antique heavy hand-made paper was used as the paste-down/flyleaf.

Several bookseller marks inside each cover. On the flyleaf I read “Ex Libris Claudij Desjires, Resuntini en Burgundia, 1598”. The 1598 is hard to read, but I think it’s 1598 because of the spelling of “Claudij” and “Burgundia” for Burgundy, both quite antiquated.

Hint of a damp stain on title page but it quickly disappears just several pages back. There are occasional damp stains here and there as you go through the work but they are light , and a handful of pages in depth, and I’m having a hard time finding/seeing some of them. There is light foxing throughout, but as you get deeper into the book it’s mostly on the margin and the pages are in good condition, reading and thumbing through the book is done with ease. The paper is not brittle. Occasional small dog-ears.

I find about 10 pages with annotations in the margins, but such was the writer’s reverence that he finished many of his notations with the square cross symbol, adding a unique touch to this book from a Carmelite hermitage.