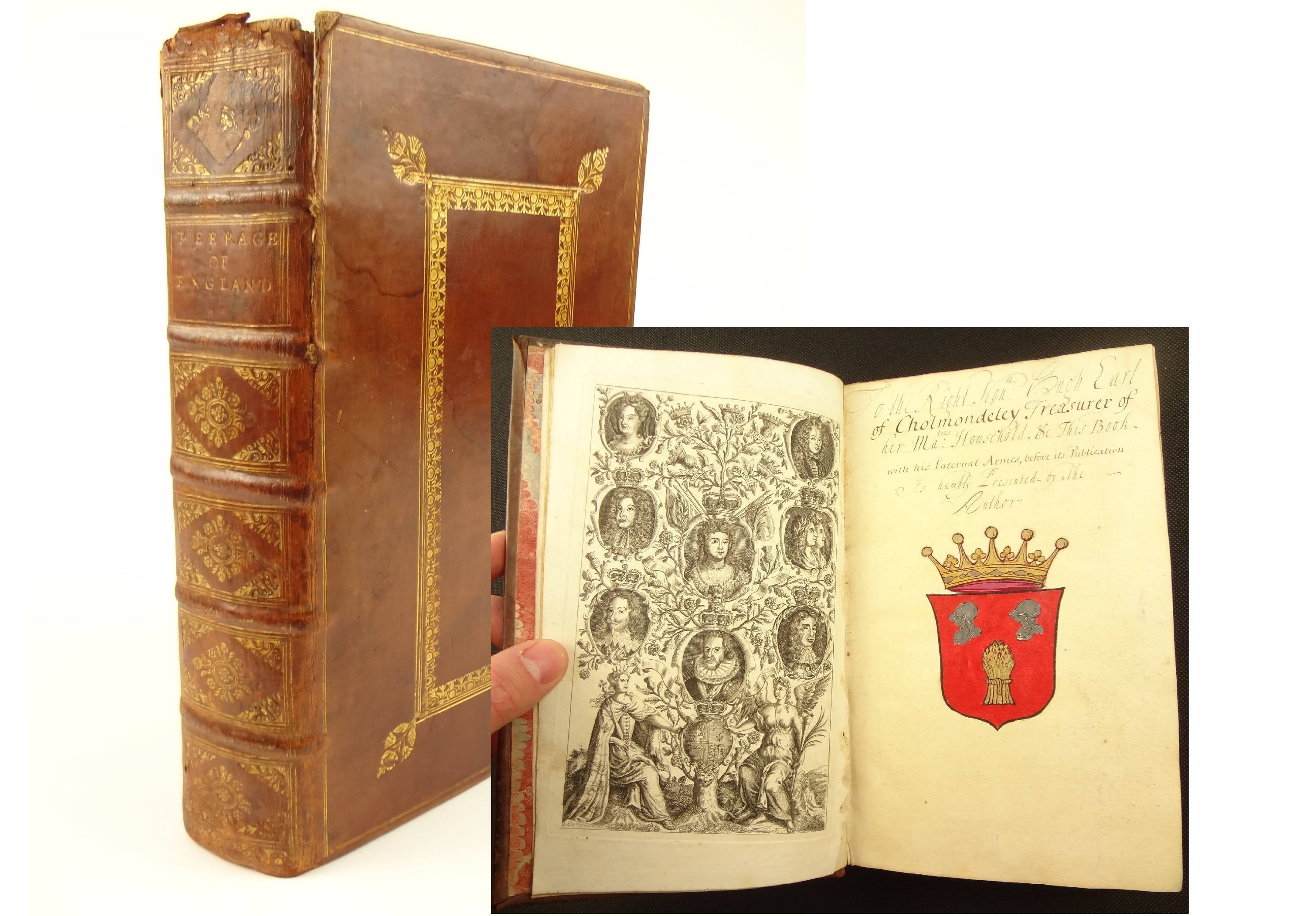 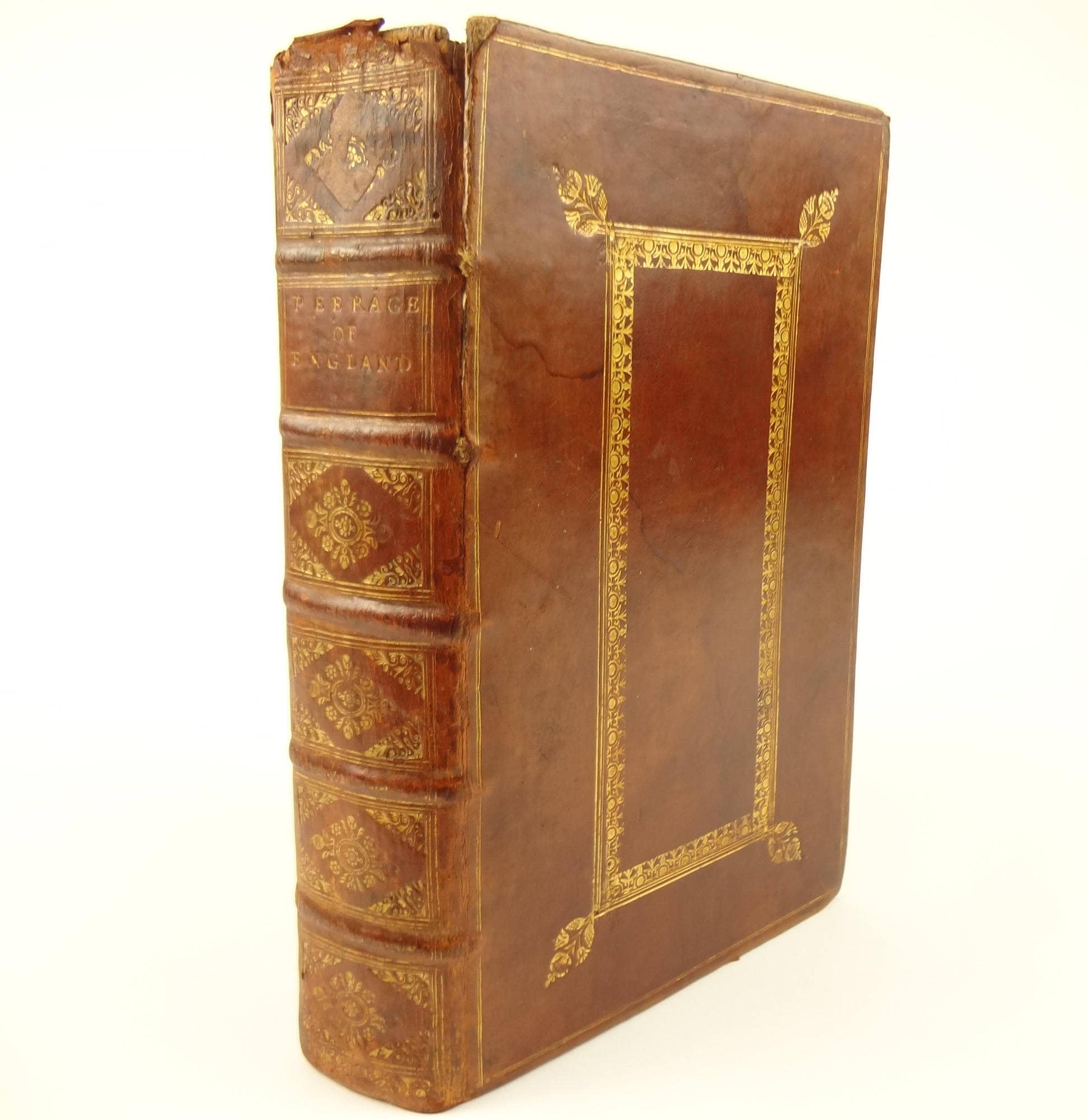 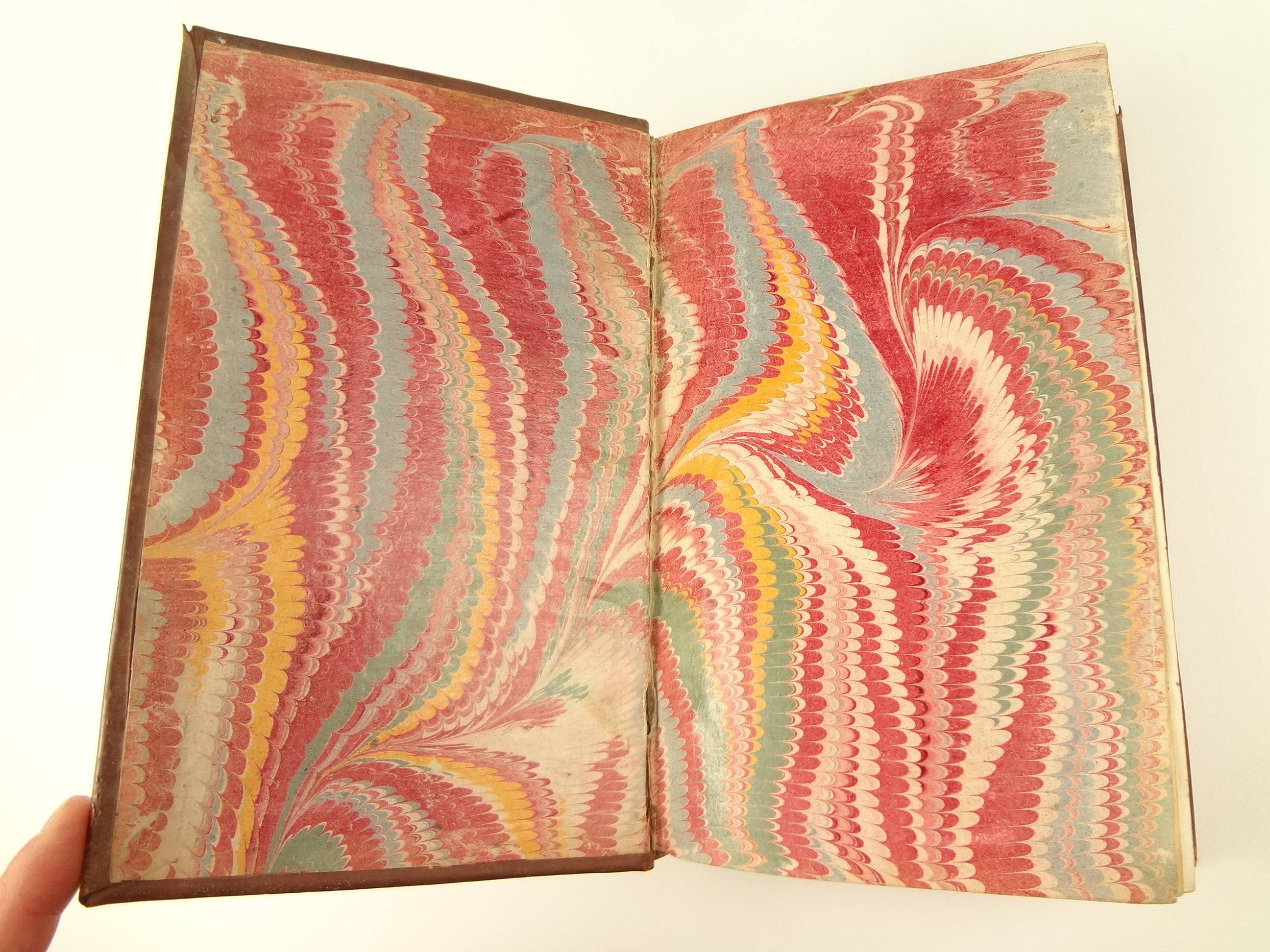 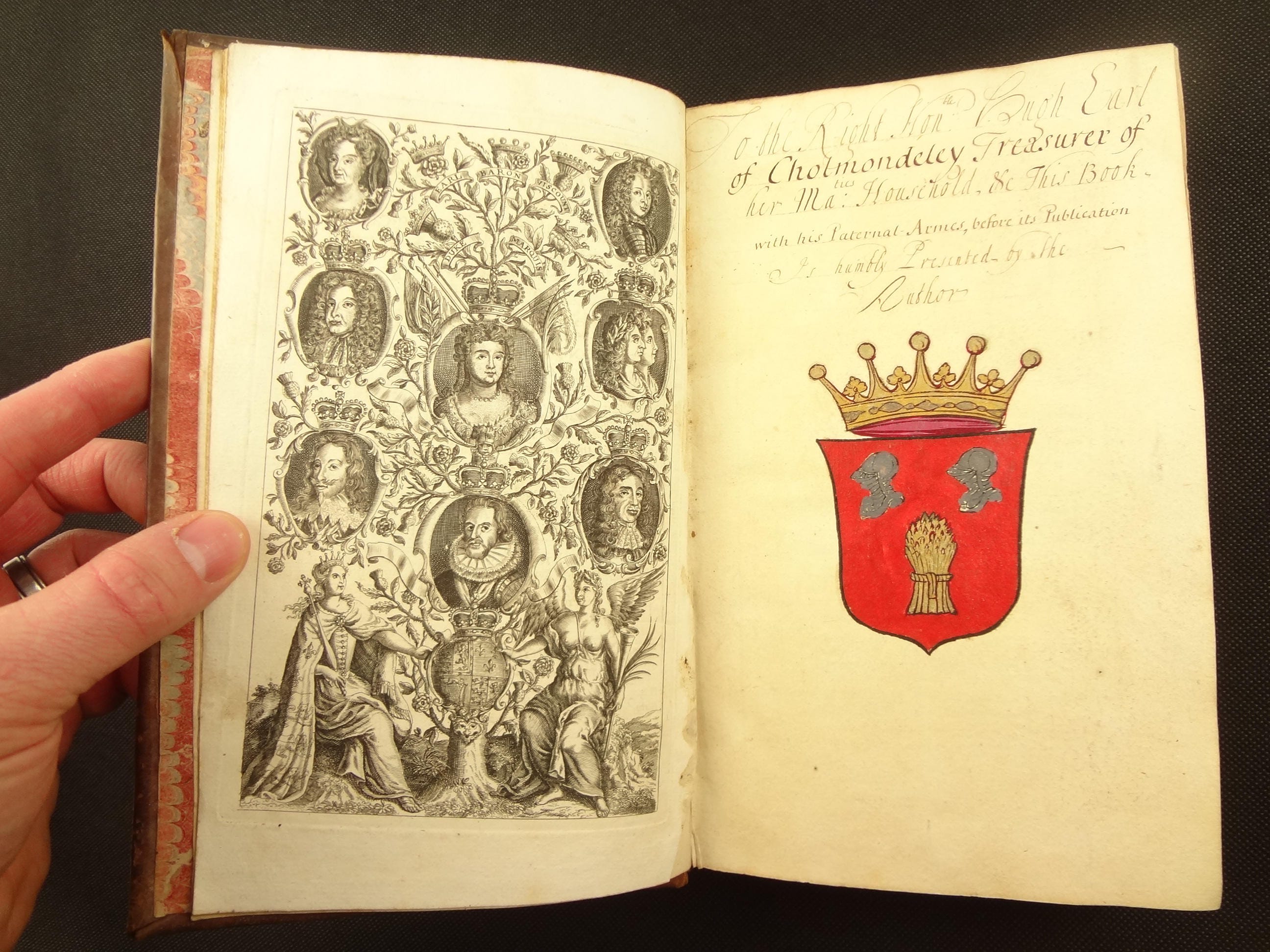 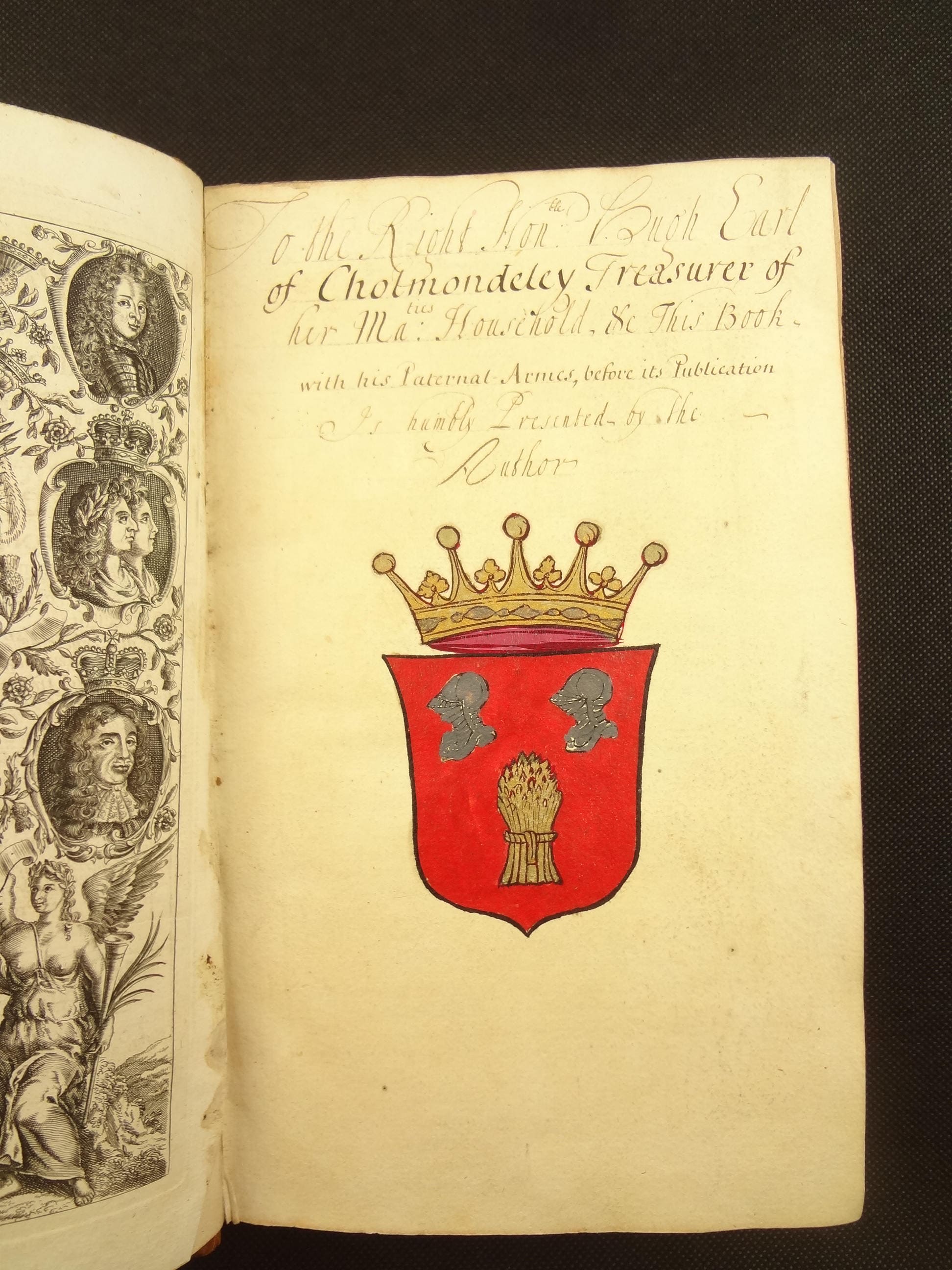 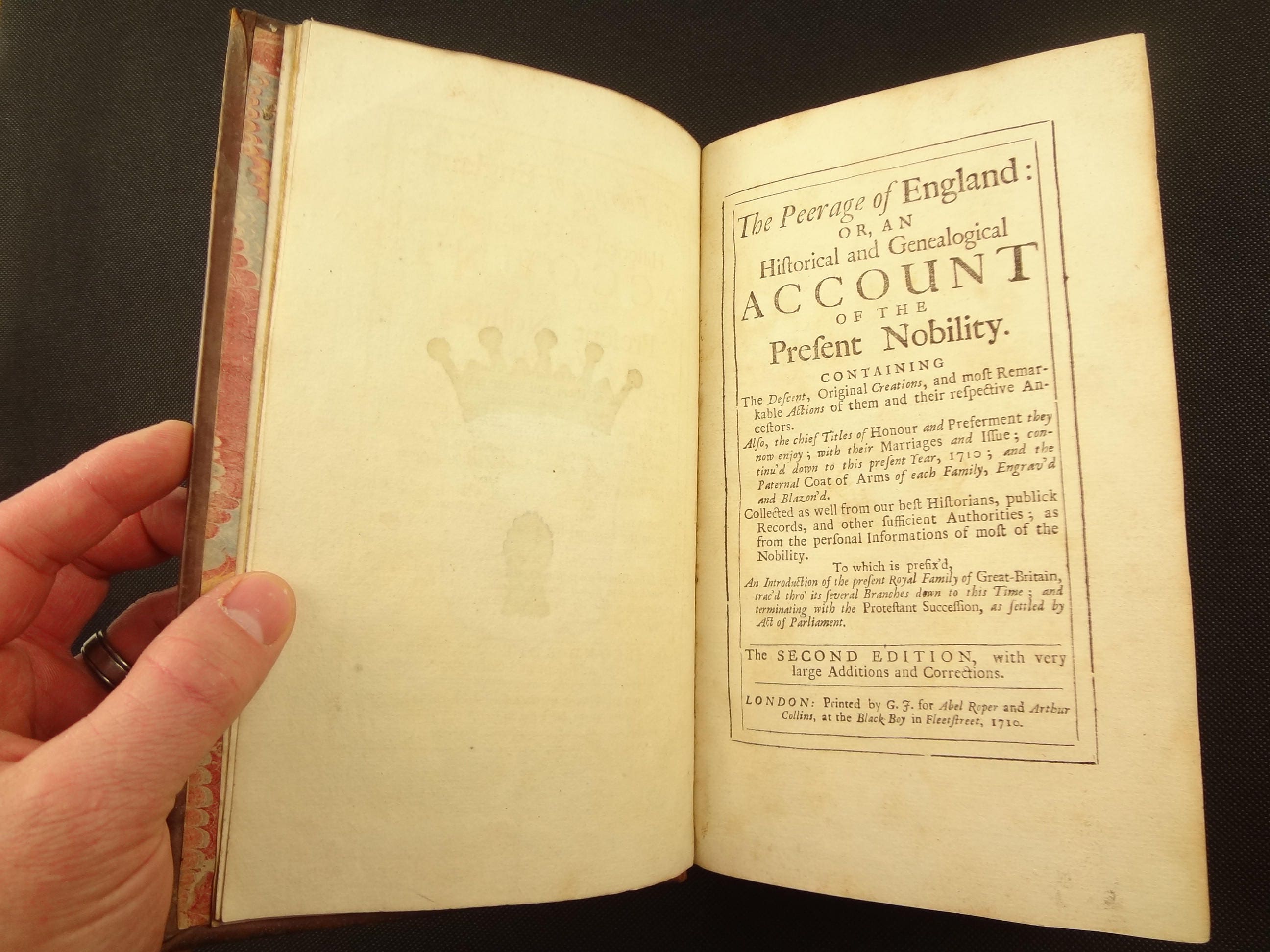 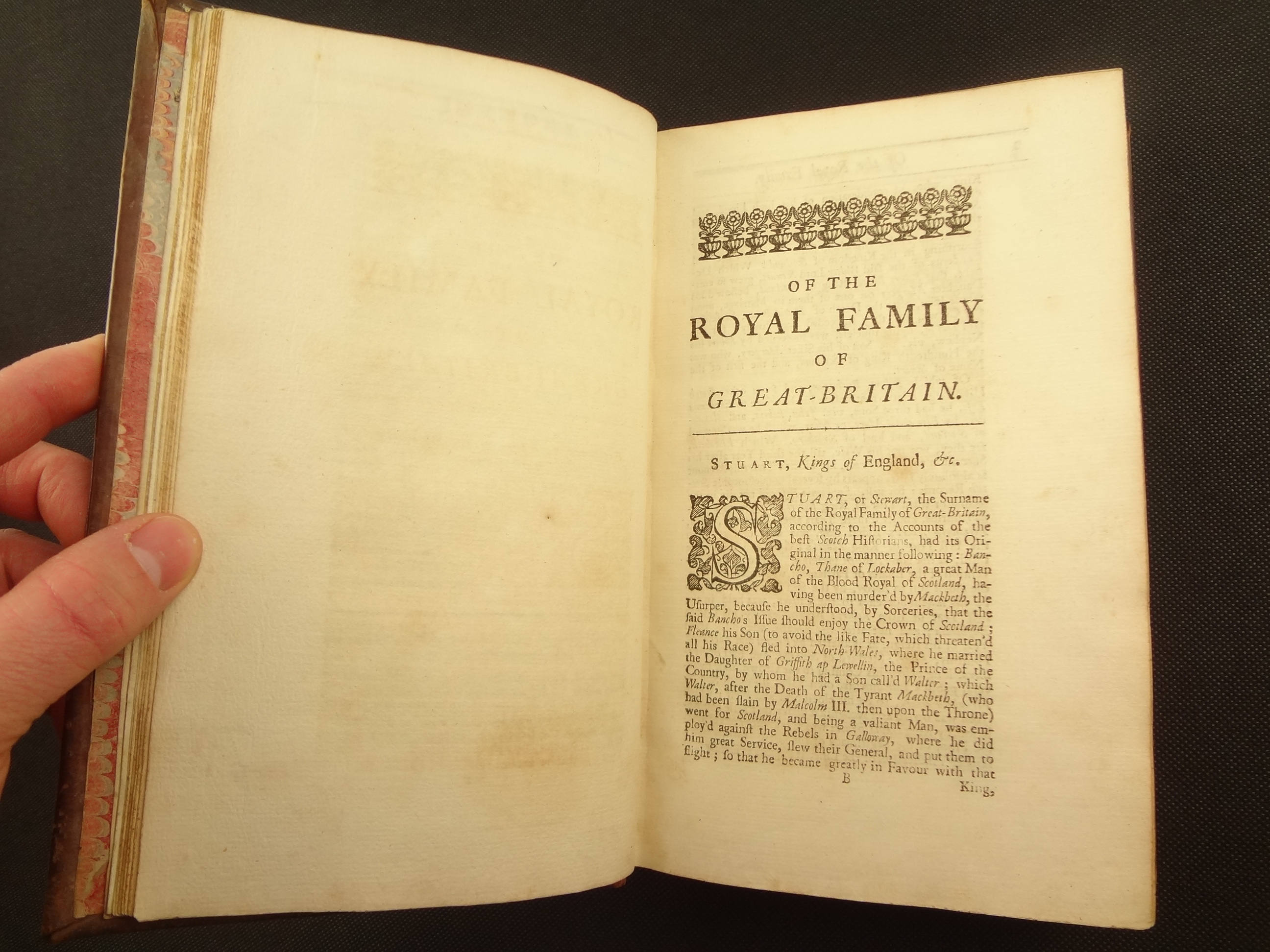 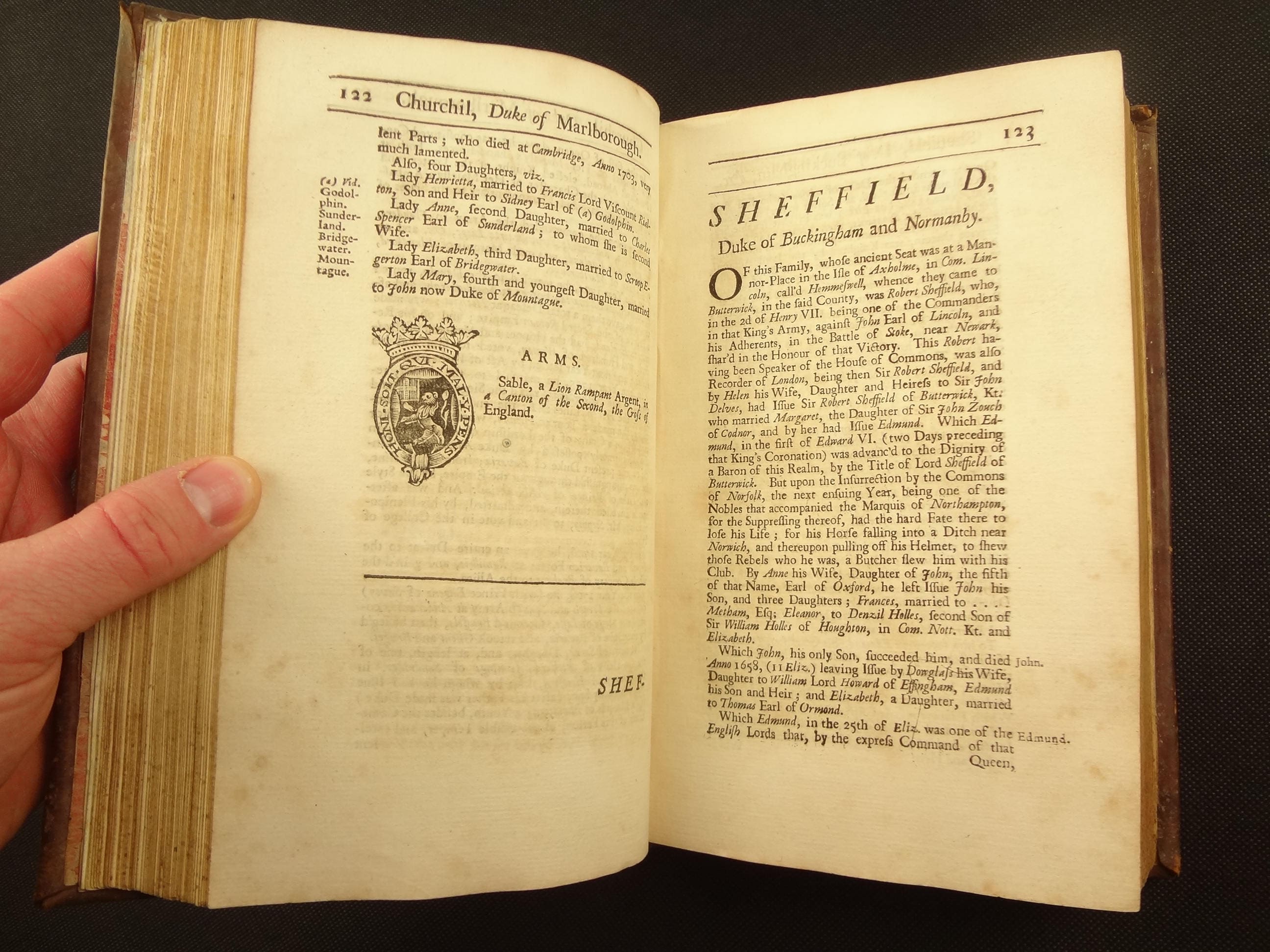 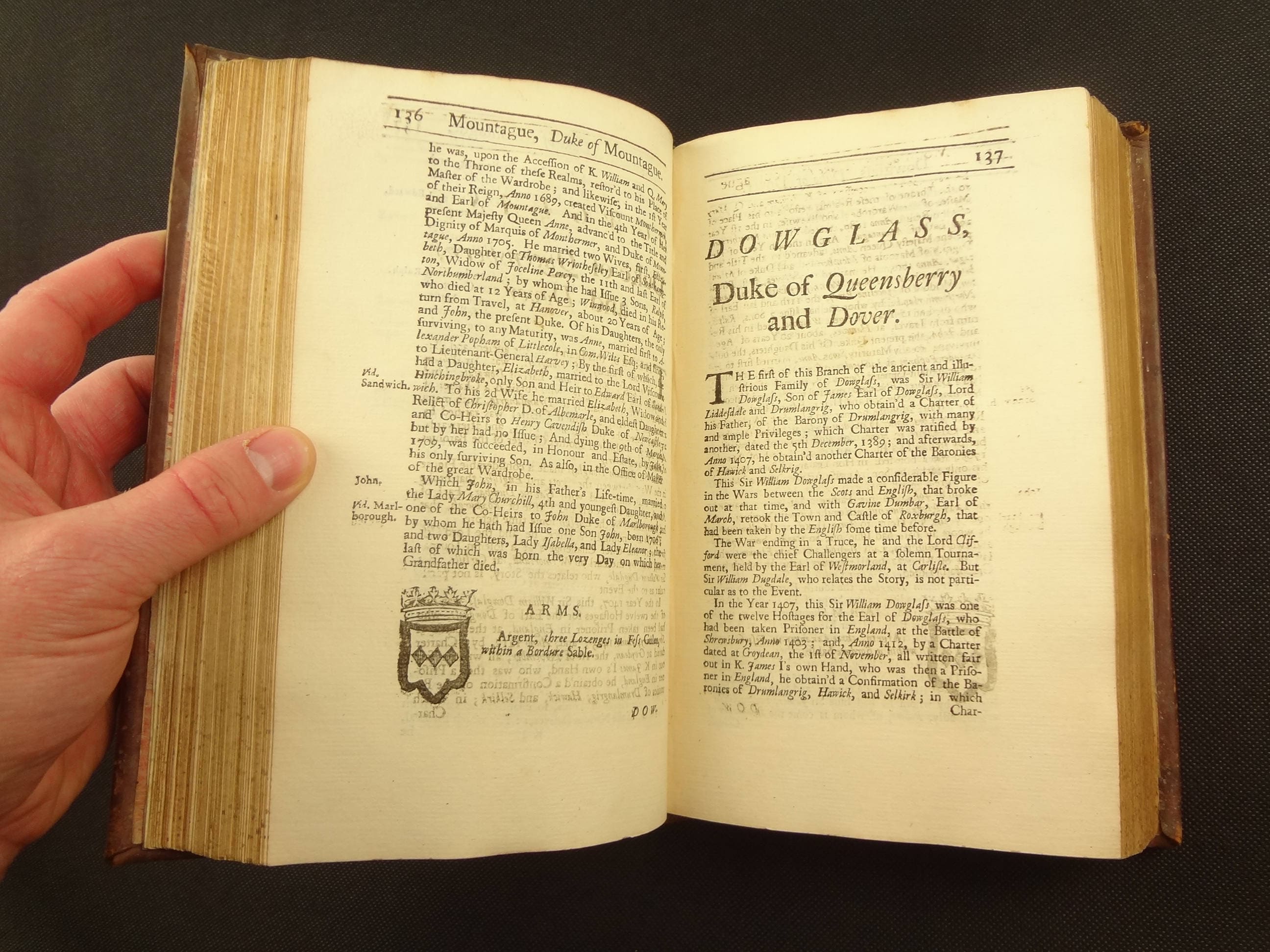 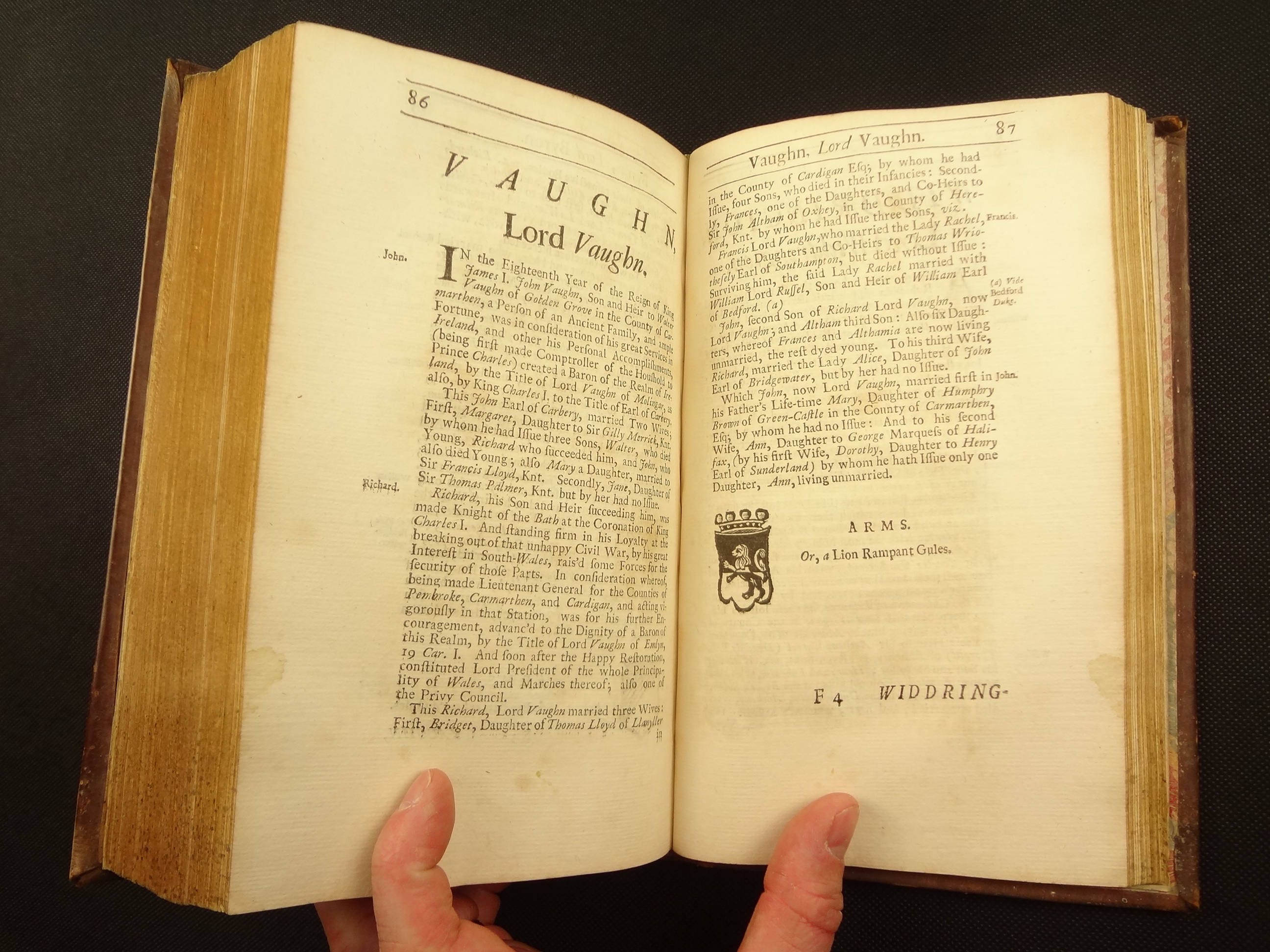 Handsome presentation copy of the second (much enlarged) Peerage of England by Arthur Collins. Presented by the author to Earl Hugh Cholmondeley, with his arms emblazoned (painted) on the presentation insert.

About the Author & Literature -
Arthur Collins (1682–1760) was an English antiquarian, genealogist, and historian. He is most known for his work Peerage of England. It contains a "Historical and genealogical account of the present nobility" including discussions of reputed ancestors, and the coat of arms of each family "engraved and emblazoned"; also with an introduction of the royal family. Samuel Egerton Brydges released a later edition in 1812, bringing all of the book's contents up to date and describing Collins as "a most industrious, faithful, and excellent genealogist" whose only failing was a habit of regarding rank and titles with "too indiscriminate respect and flattery."


About the Provenance -
Presentation reads, "To the Right Hon.(orable) Hugh Earl of Cholmondeley Treasurer of her Ma(jesties): Household, & c(urator?) This Book, with his Paternal Arms, before its Publication It's humbly Presented by the - Author".

As Cholmondeley was only lately an Earl, his being included in this publication was sure to ingratiate him to the author.

Although I can't find record of this work being previously sold, I do find that Collins also presented a presentation copy to both the Earl of Wharton (item 790 in John Bryant's advert., Gentlemen's Magazine v.35 1834) and the Earl of Sunderland (Bernard Quaritch item 13534 in 1882 catalogue Civil and Ecclesiastical).

18th century calf, 19th century ads claim this is a "large paper" example and it seems so, with wide margins. 8vo signatures. Binding style of the period, boards with central gilt compartment with several fillets and a roll as borders, and corner flowers. Spine with six compartments with central floral and acorn decoration and fillet borders; one compartment has "Peerage of England" in gilt with fillet borders. Pages - (2), viii, 408 pages, numbering restarts at "Barons" and counts 158, one leaf advertisement, (2). Pages numbered 165 to 168 not present, but appears printer's error as signature on 164 "Earls" matches title on 169 (or perhaps a family was deleted late in printing). Collation complete, all other pages numbered appropriately except (Barons) 154=104.

See pictures. Shelf wear,some marks to boards and spine and a little corner rubbing. Moisture mark on front board. Front boards joint cracked to third spine rib. Chipping at top of spine. Small old label covering part of top compartment at spine. 2 small gouges at bottom of rear board. 1 cm crack to top rear joint. Endpapers yellowed. Text block has slightest hint of yellowing/foxing throughout book as is typical of English paper of this period. The presentation plate has some loss of silver on the helmets. Pages 1-19 have a spot of moisture mark at the bottom fore-edge (light), doesn't touch text). .5 cm burn hole on page 97 (reading by the fire in days gone by).Pages 115-122 have a little darker foxing than the rest of the book (still easily readable and not bad).Pages 162-178 dog eared right at the upper corner. 185 - printer's error, stripe. Small spot at bottom of 315.Another .5 cm small burn hole at 321. Pages 145 (Barons) to end, slight wave. Rear endpapers deckled upper right.