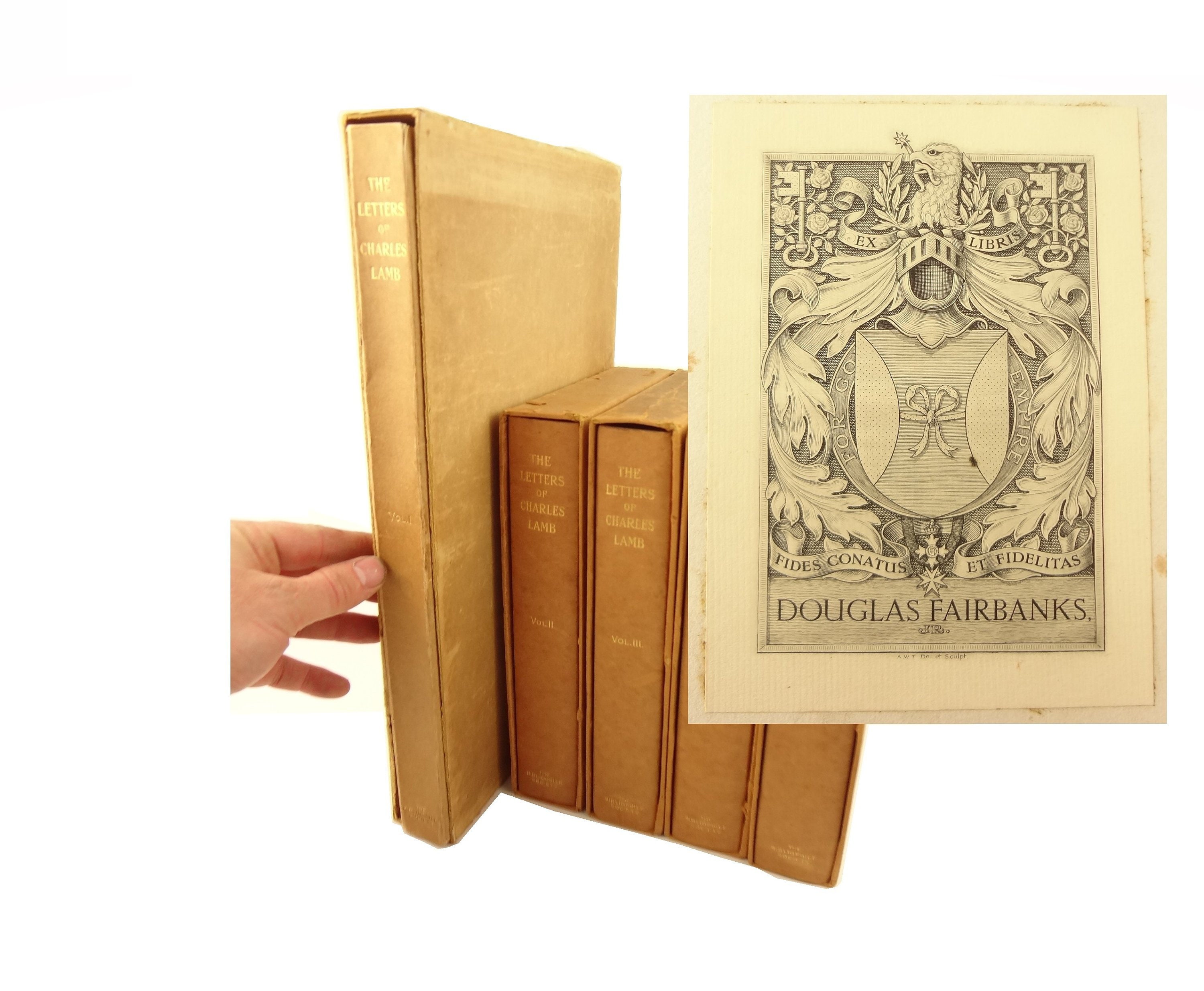 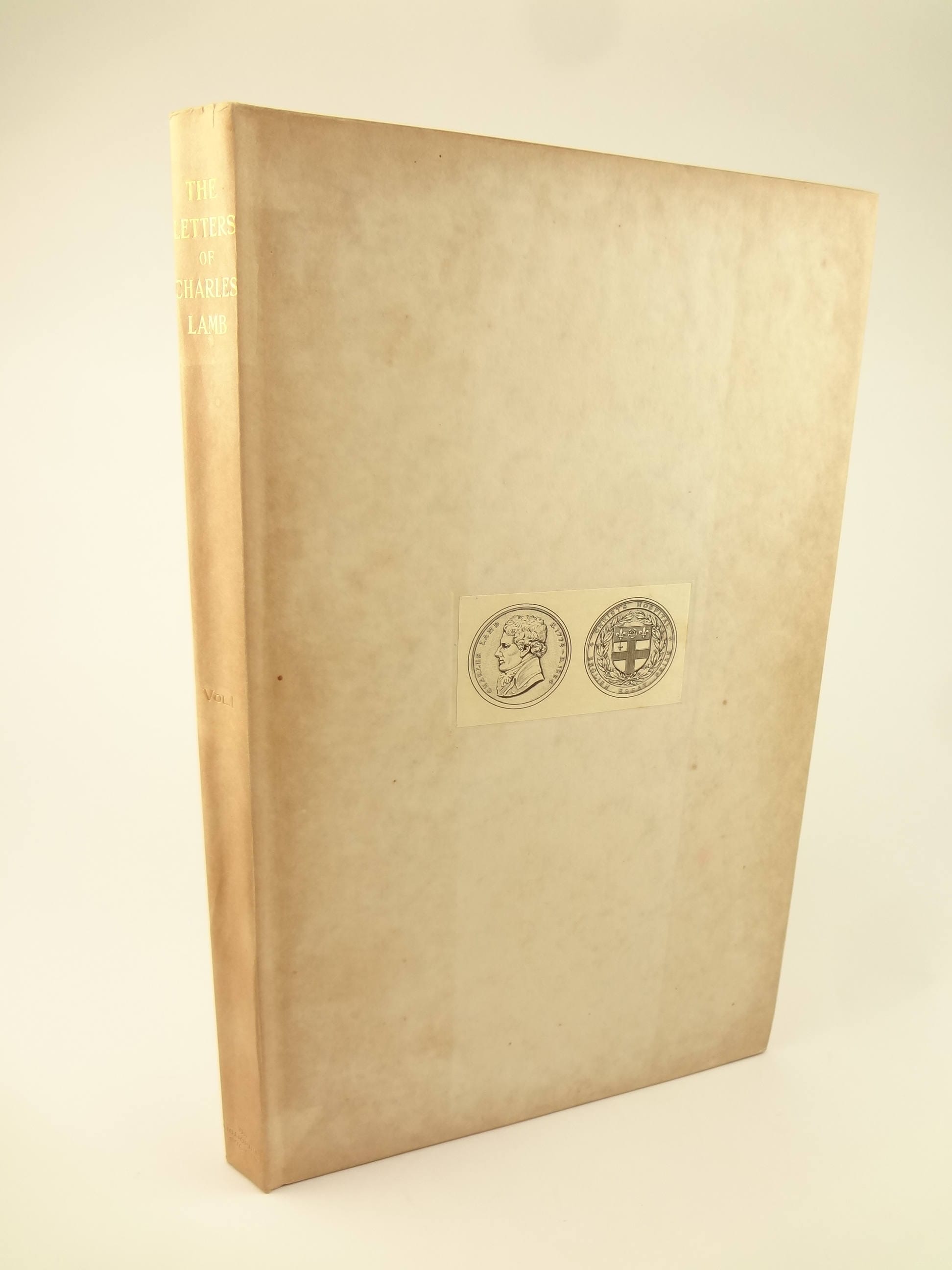 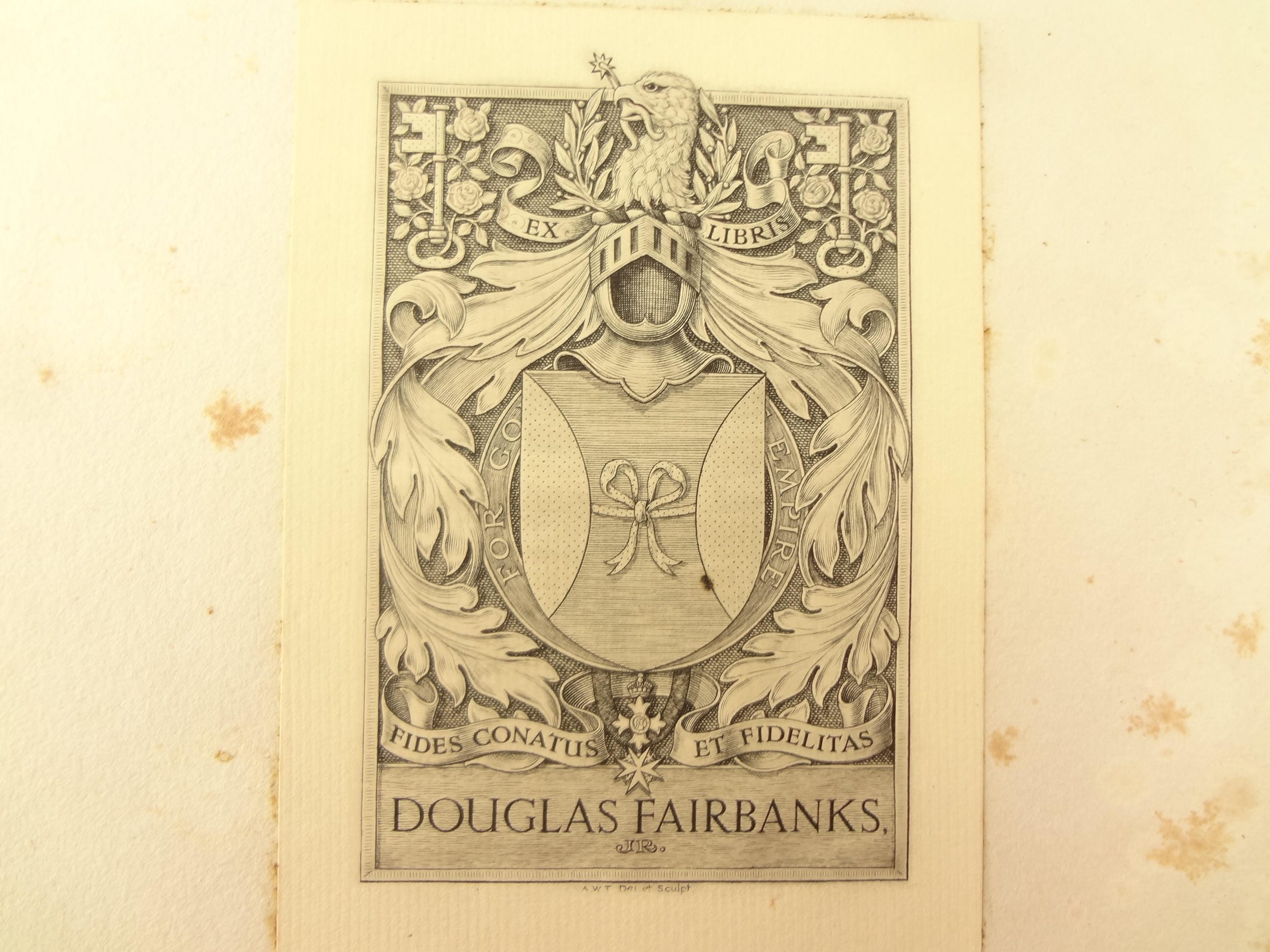 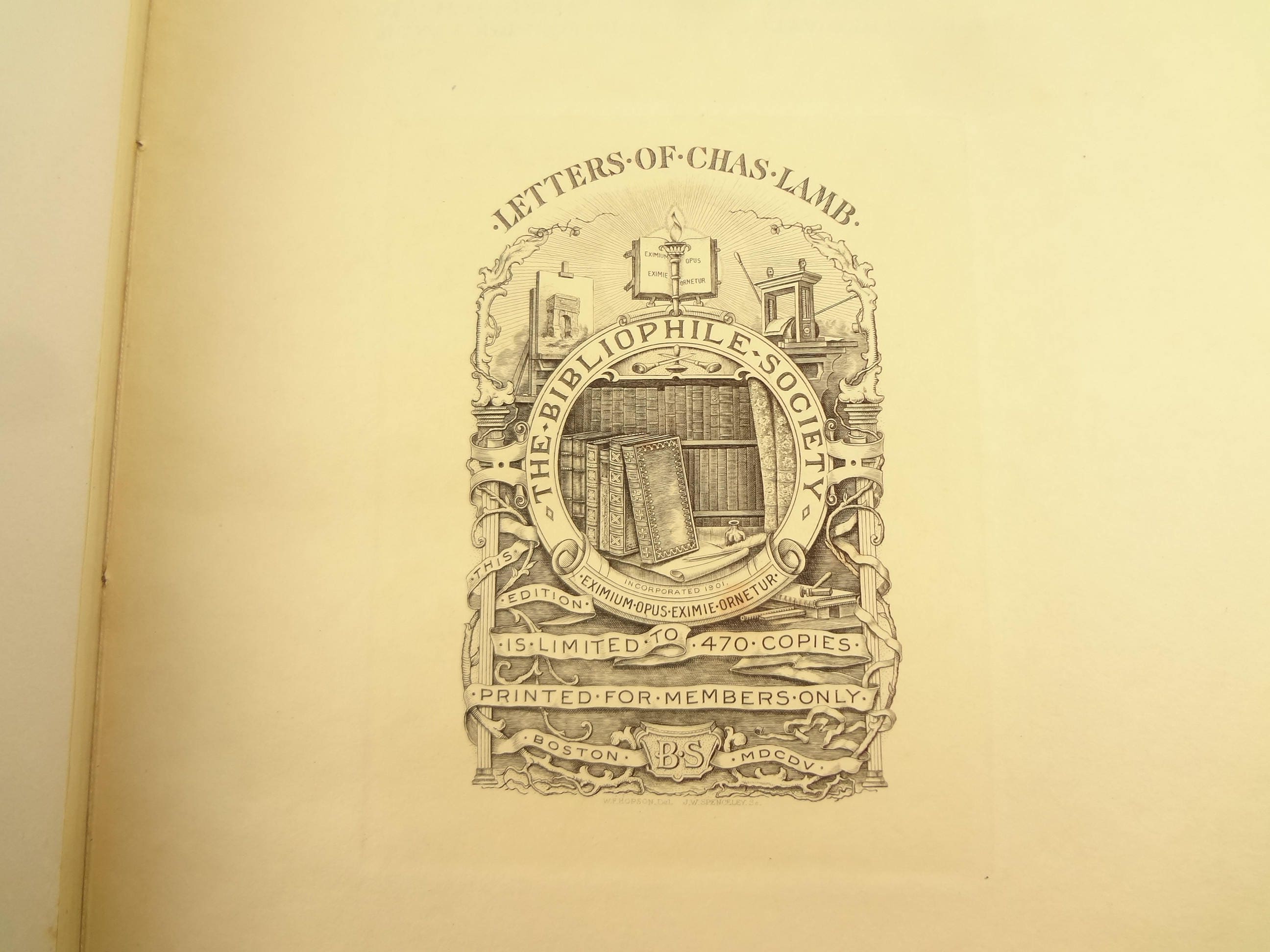 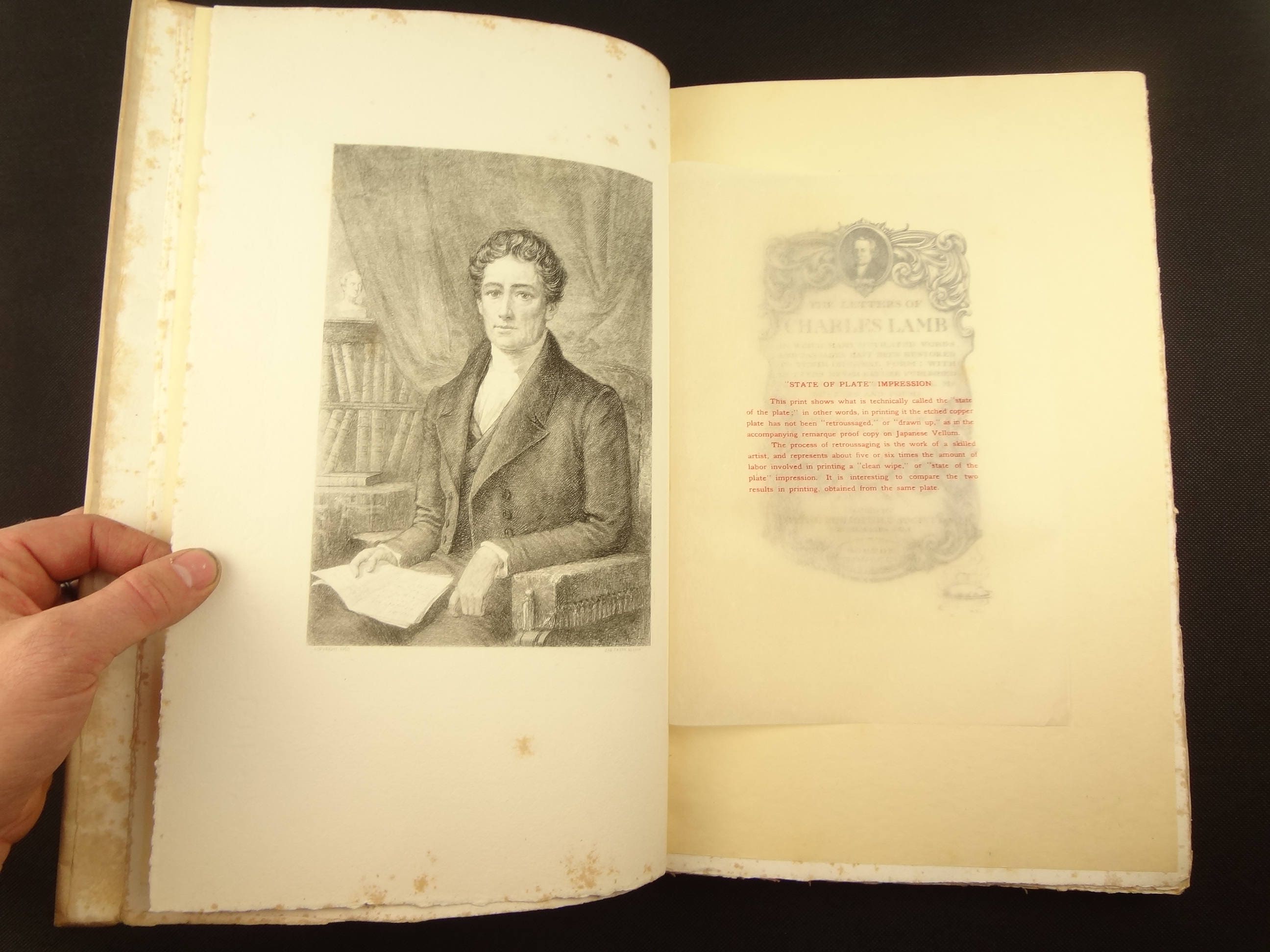 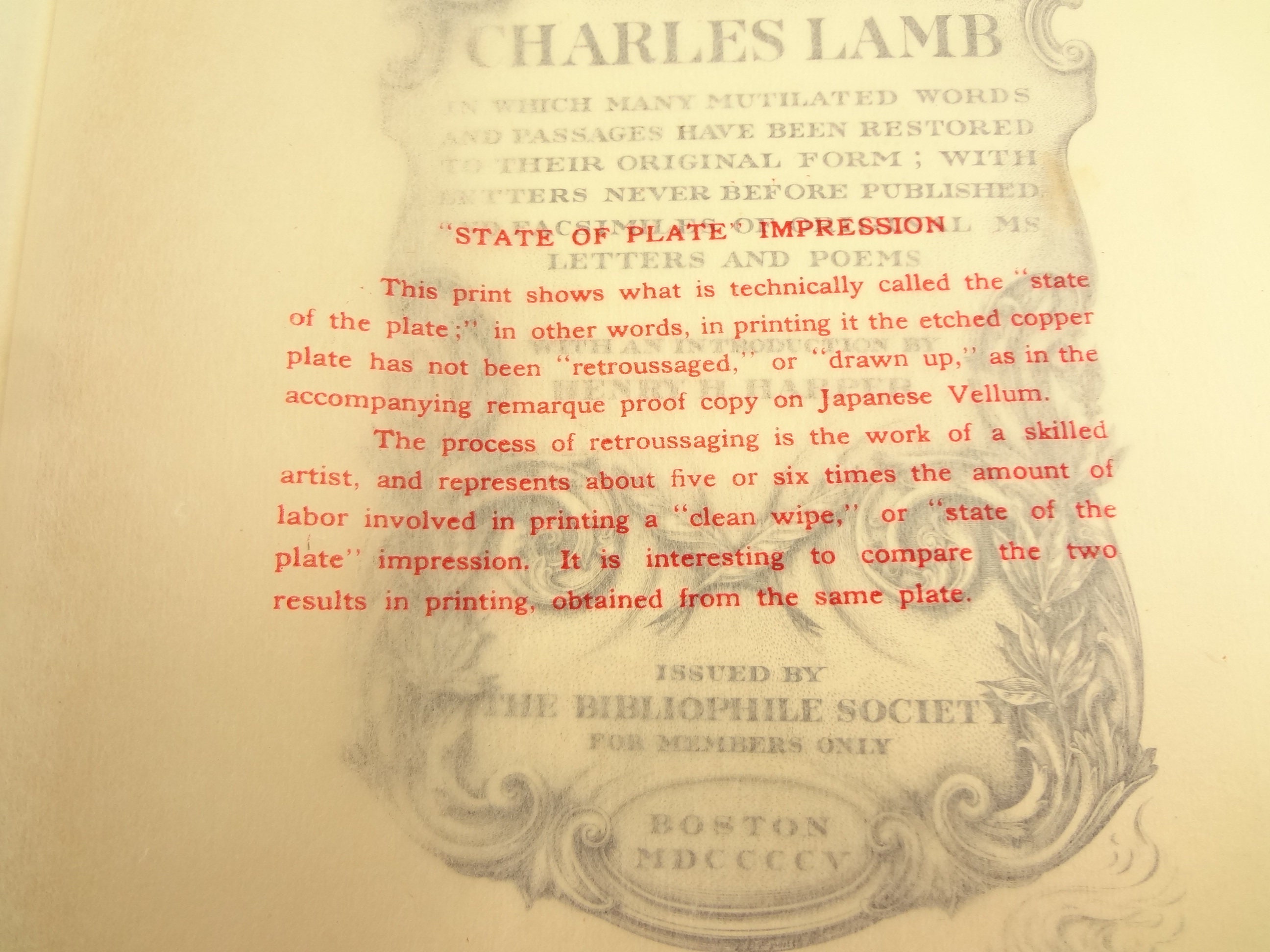 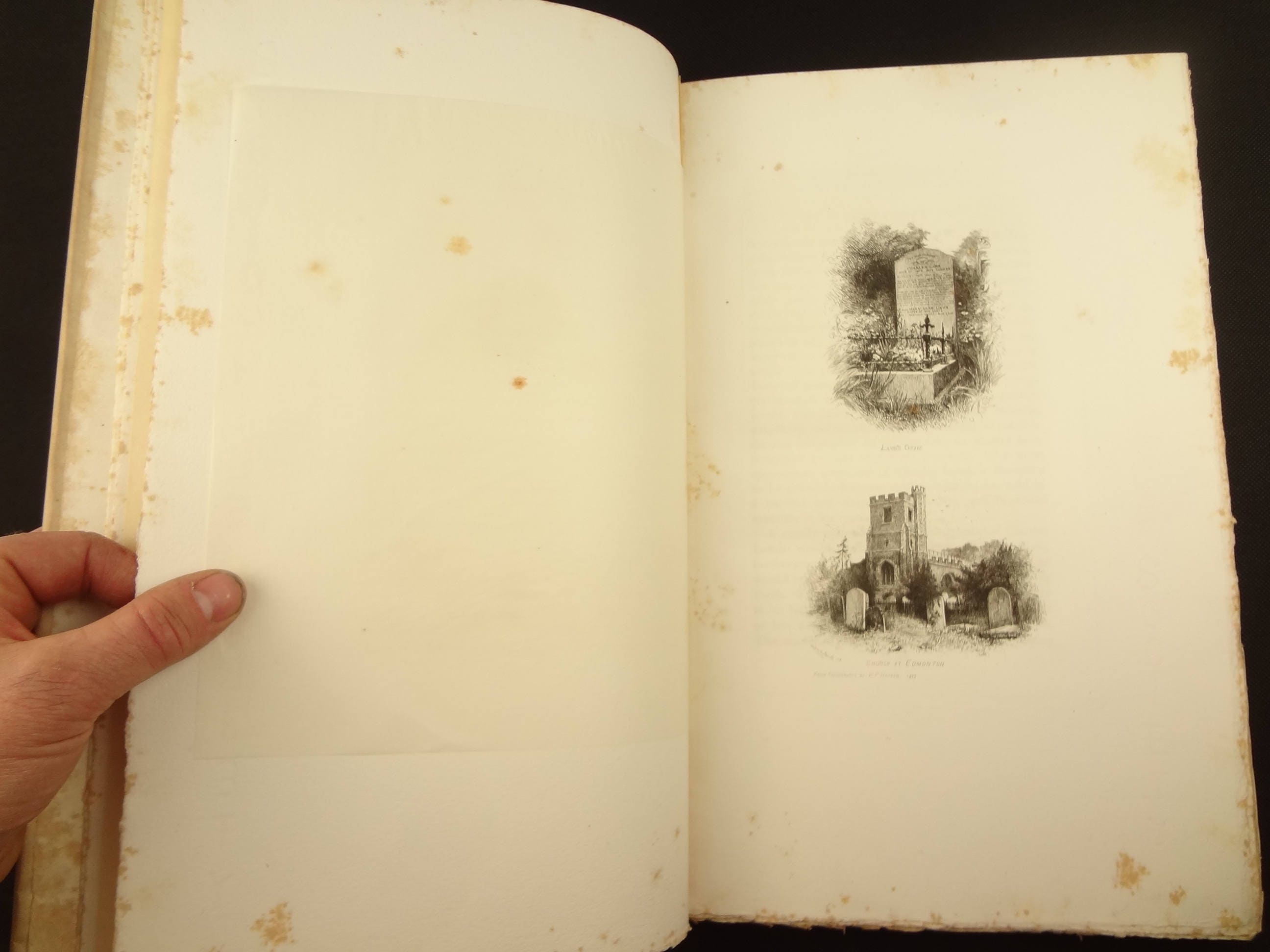 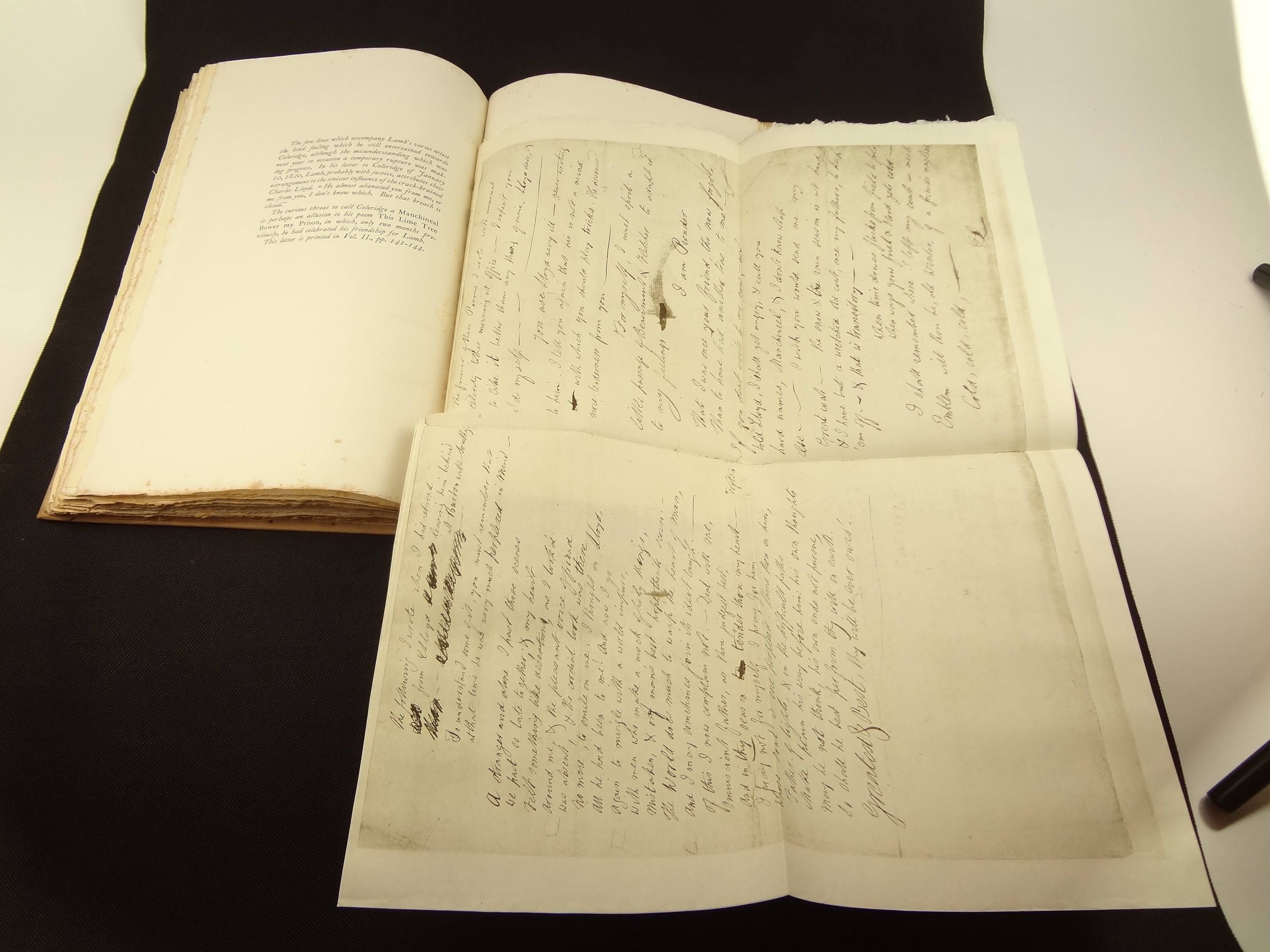 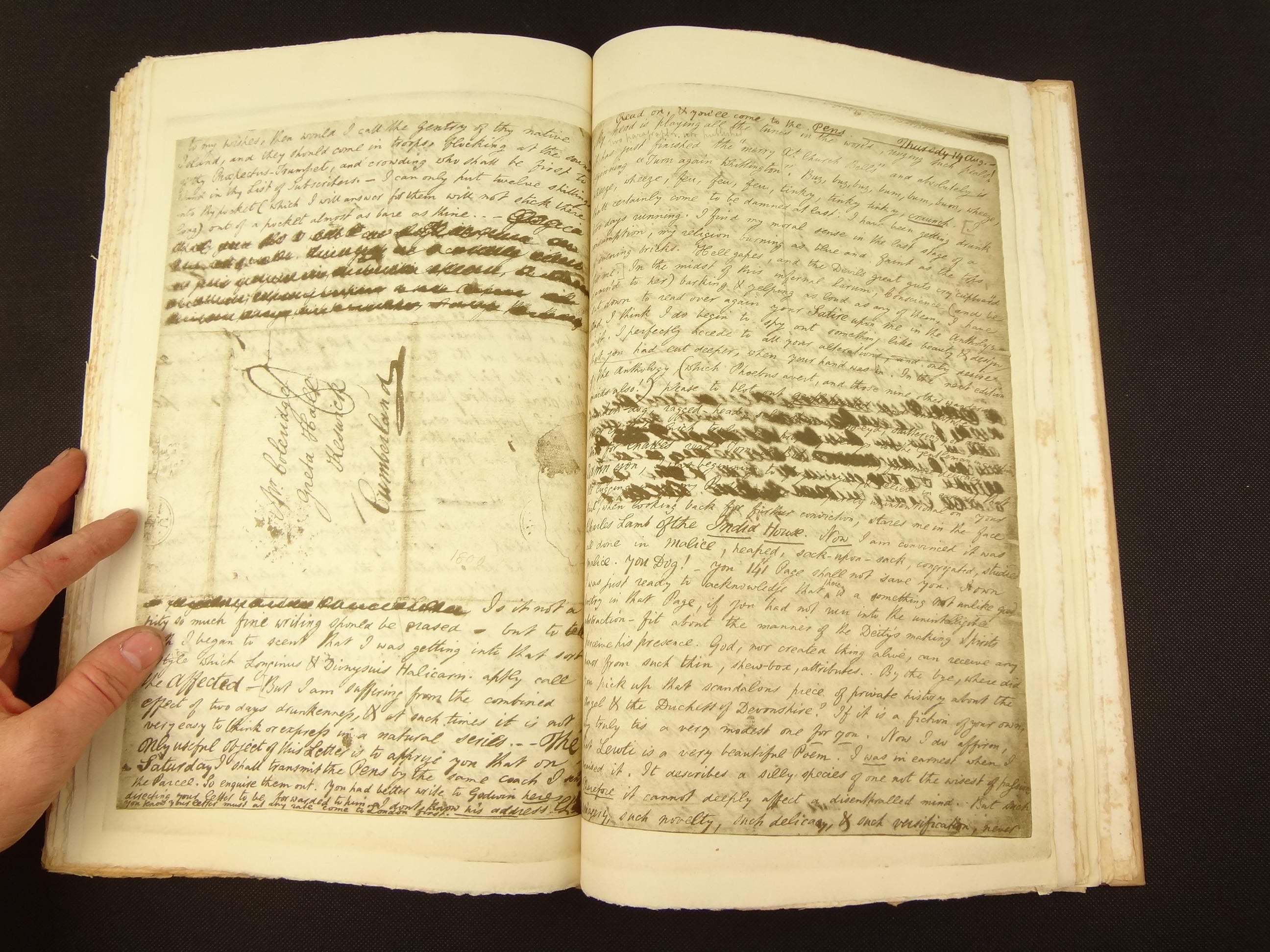 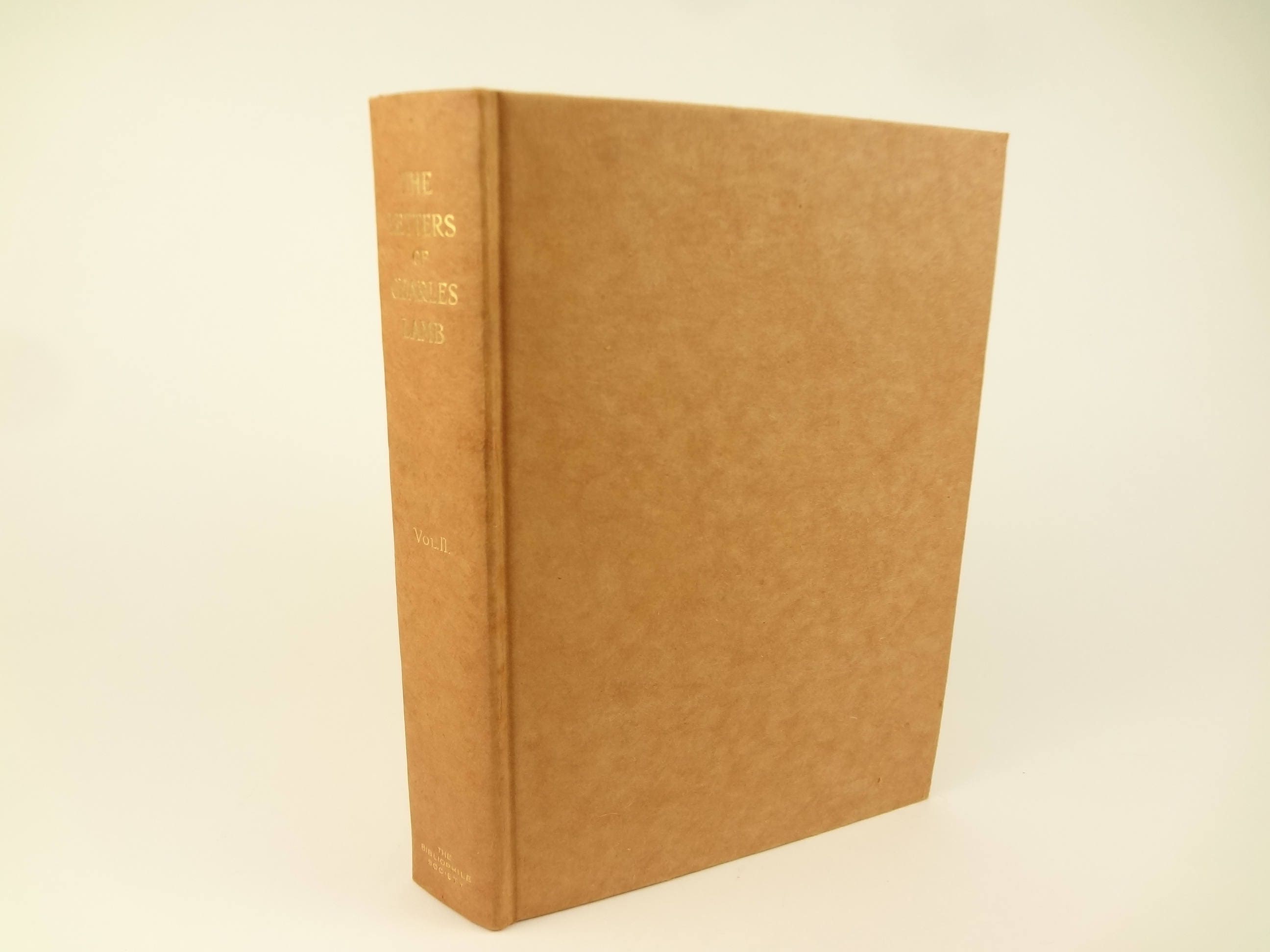 Volume one is oversized and contains many facsimile reproductions of Lamb's letters blown up and in fold-out format.

Special effort was taken by the Bibliophile Society to gather Lamb's letters, thus this is a first edition of this specific gathering of his correspondences, and may contain letters not otherwise reproduced.

"Charles Lamb (1775 –1834) was an English essayist, poet, and antiquarian, best known for his Essays of Elia and for the children's book Tales from Shakespeare, co-authored with his sister, Mary Lamb. Friends with such literary luminaries as Samuel Taylor Coleridge, William Wordsworth, and William Hazlitt, Lamb was at the centre of a major literary circle in England. He has been referred to by E. V. Lucas, his principal biographer, as 'the most lovable figure in English literature'."

The bookplate of Douglas Fairbanks Jr., the noted American actor and decorated World War II naval officer, decorates the pastedown of each volume.

Printed by the Riverside Press for the Bibliophile Society of Boston in 1905, and limited to 470 copies. Printed on handmade Dutch paper. Page edges are deckled and the top edges are uncut (still).

Volume one measures 37 x 23 x 2 cm, folio. 19 facsimile reproductions of his letters, enlarged (and in some cases fold-out), as discussed and printed in the following volumes. Also includes an introduction to the work.

Volumes 2 to 5 are the bulk of the work. The letters are printed and discussed. These volumes are in quarto and measure 23 x 16.5 cm. The paper is the same as used in Volume one, still deckled and uncut.

See pictures. Quite a bit of shelf wear to slipcases. Fairbanks plate is in every volume on pastedown, and has ghosted to facing flyleaf. Volume one slipcase cracked. Inner butterfly slip has original wrapper in it, which is starting to come apart (wax paper). Volume one paper foxed throughout, but the plates/illustrations are in better shape. Throughout all five volumes the foxing is the same. Pages are largely uncut (not opened). No writing or tears that I see.