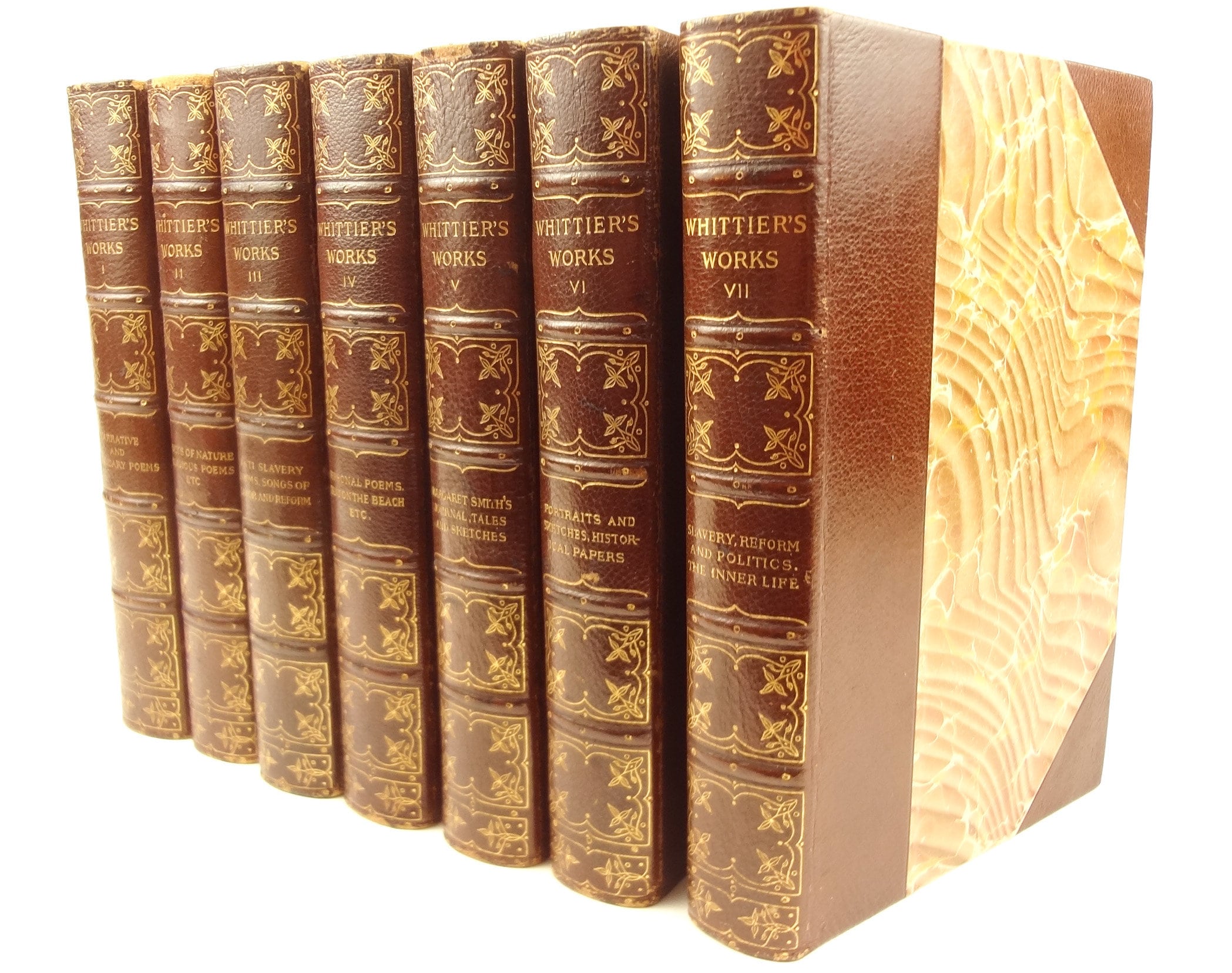 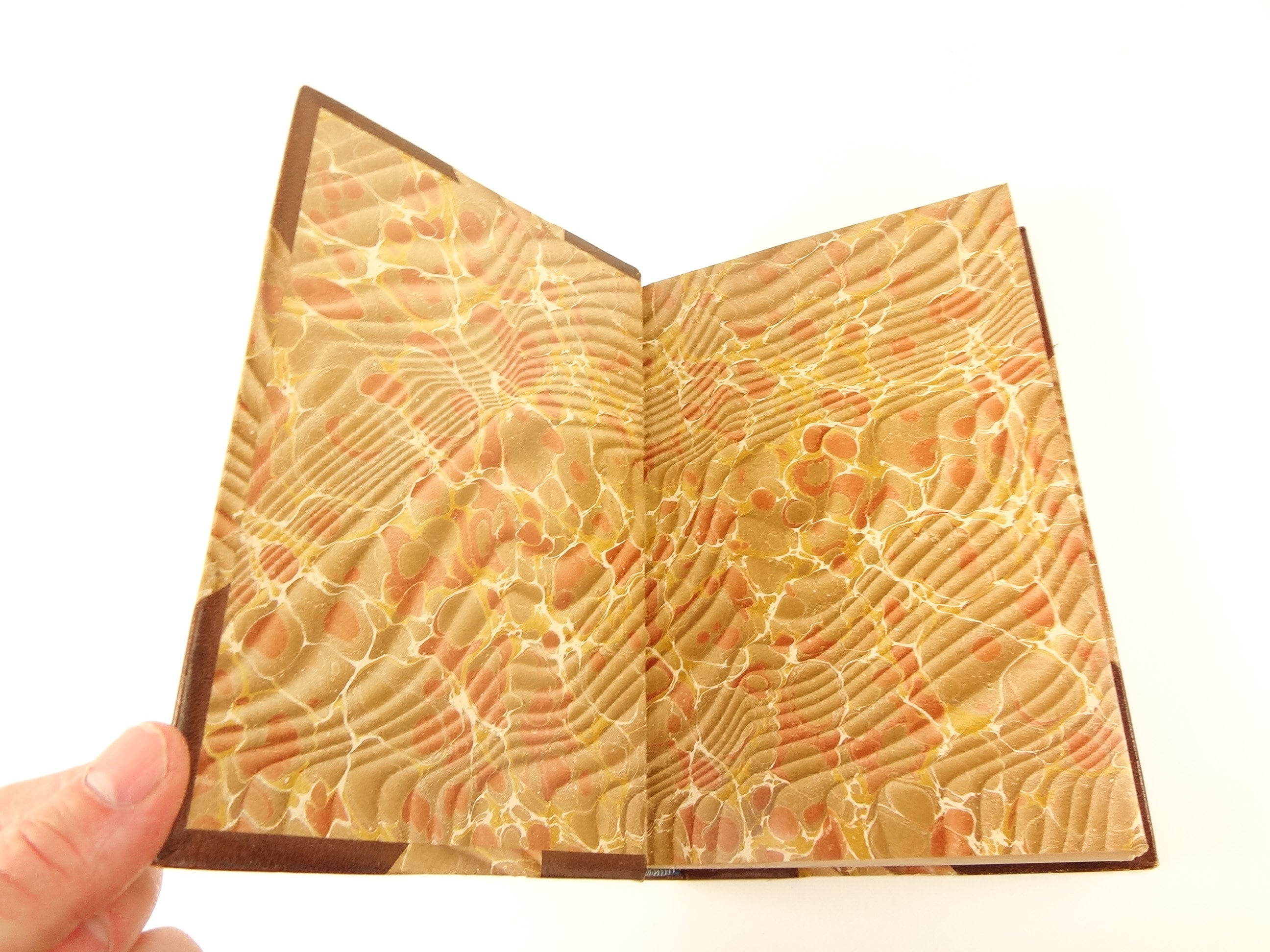 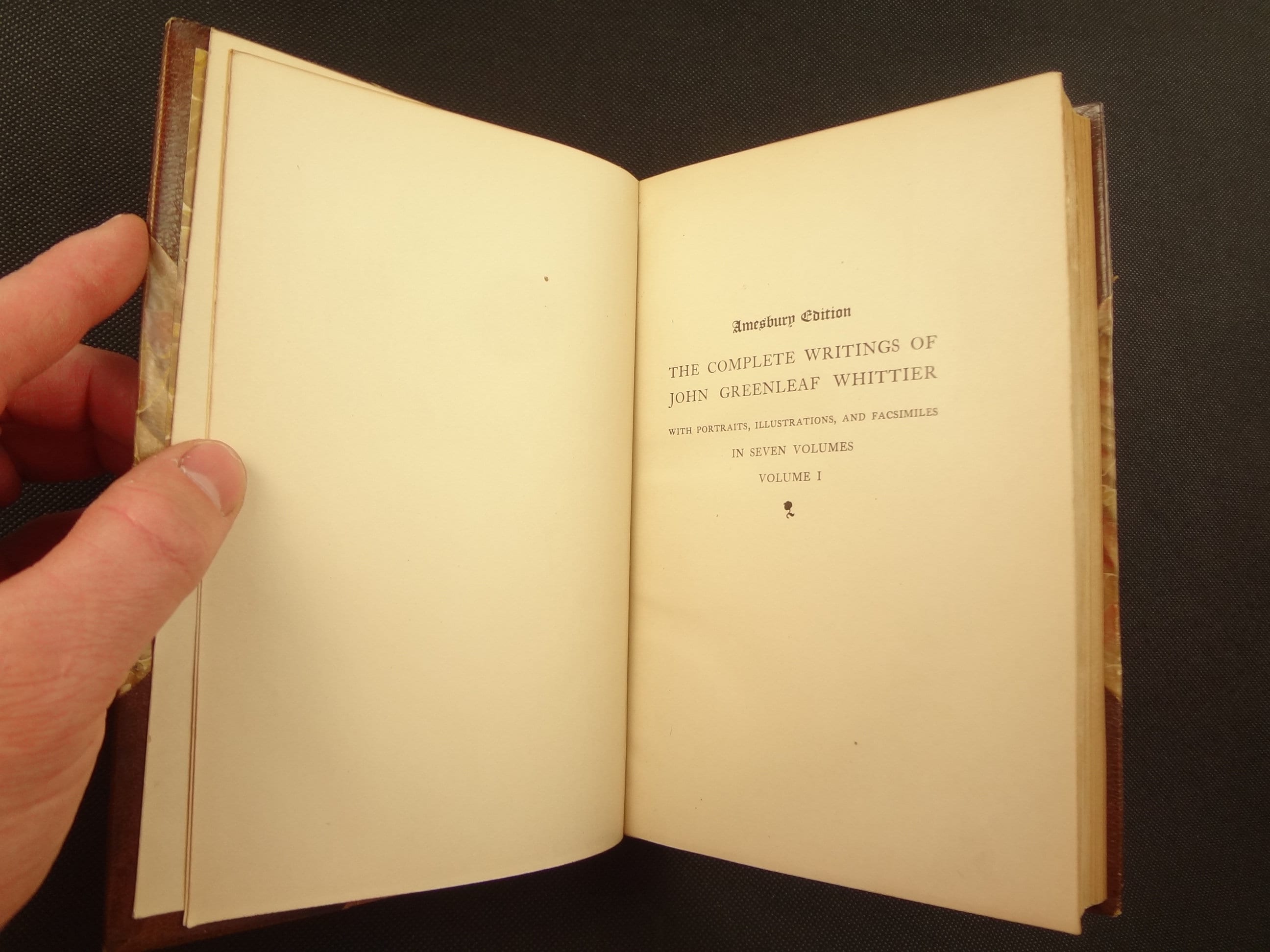 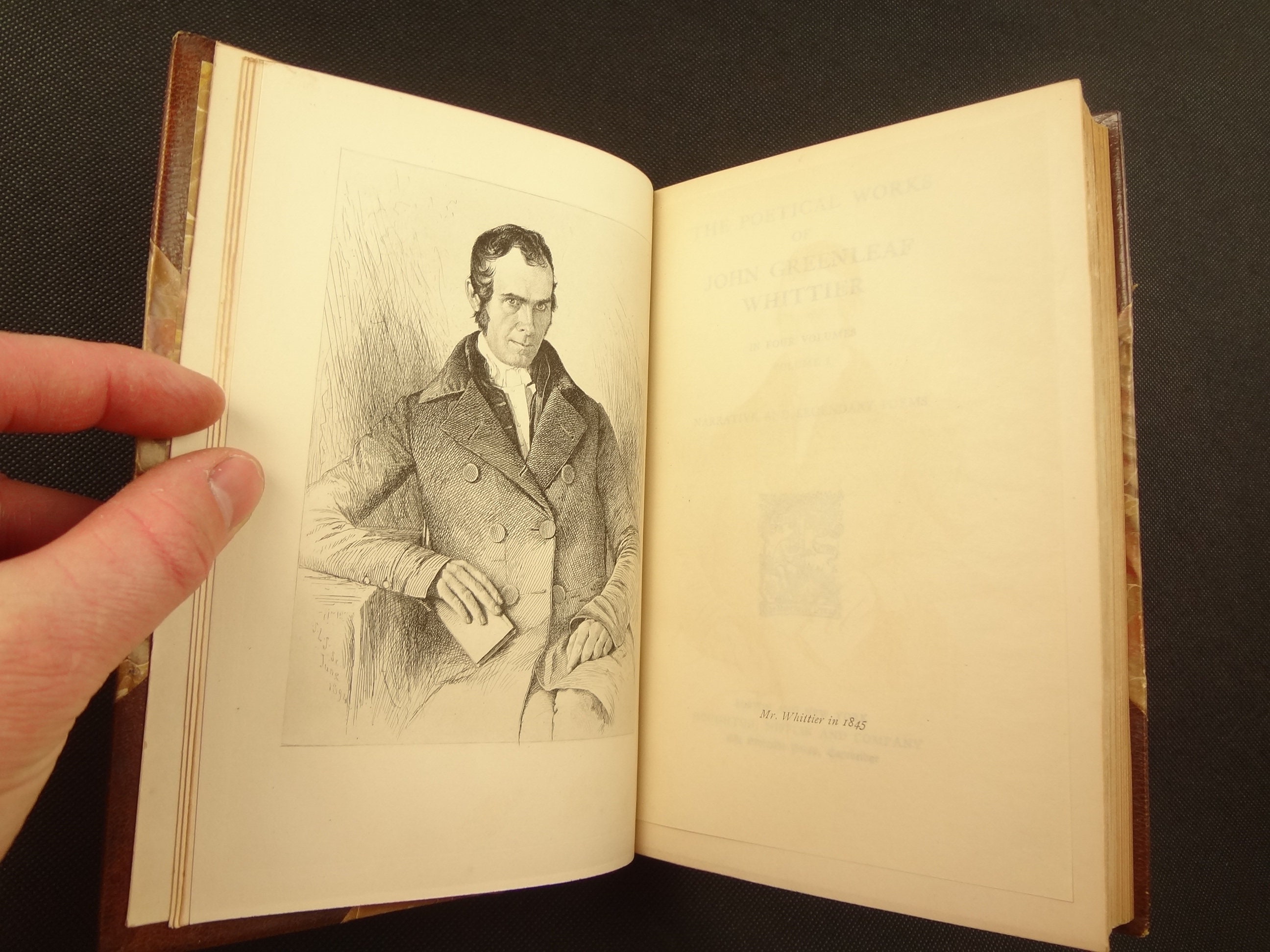 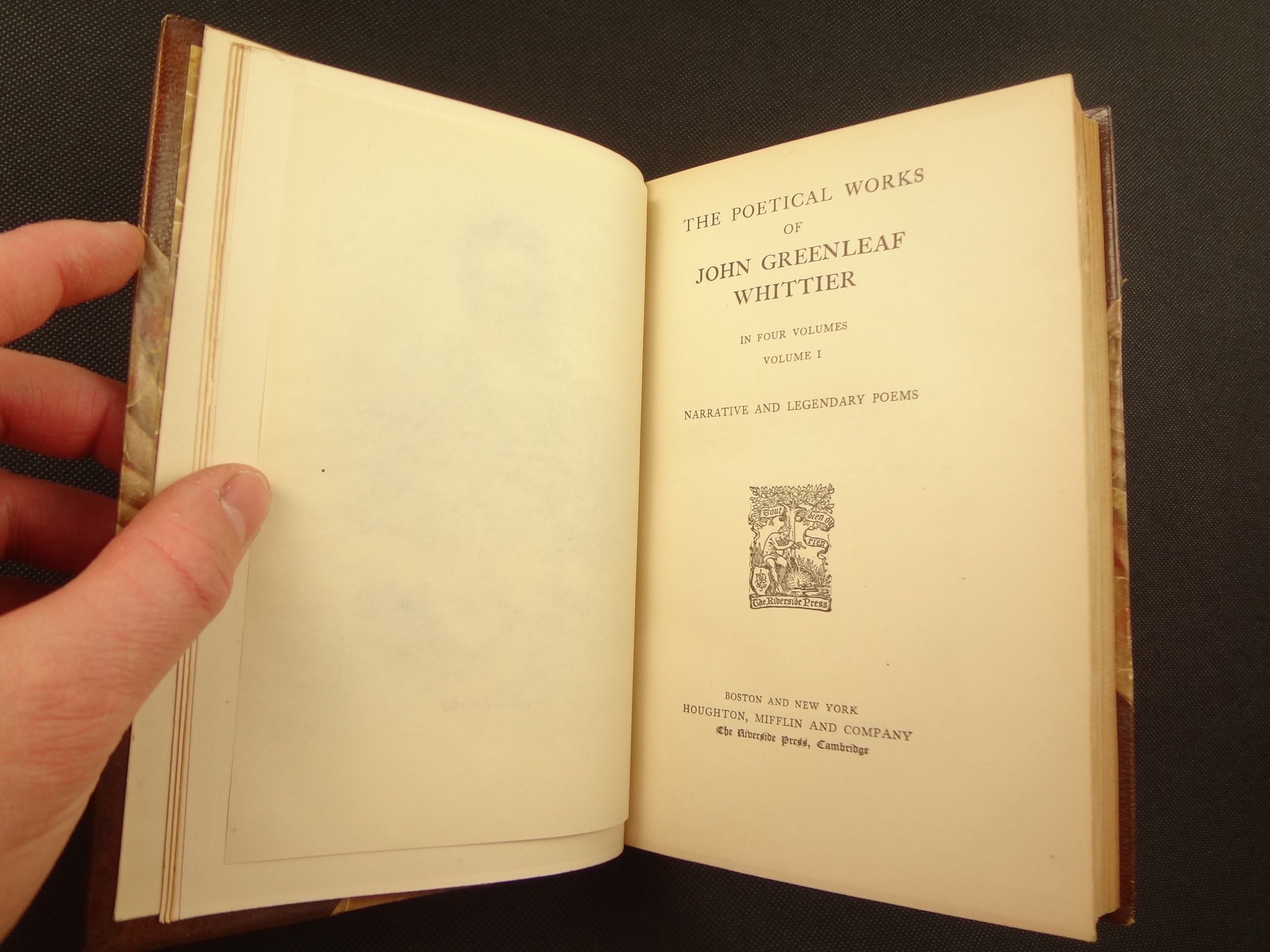 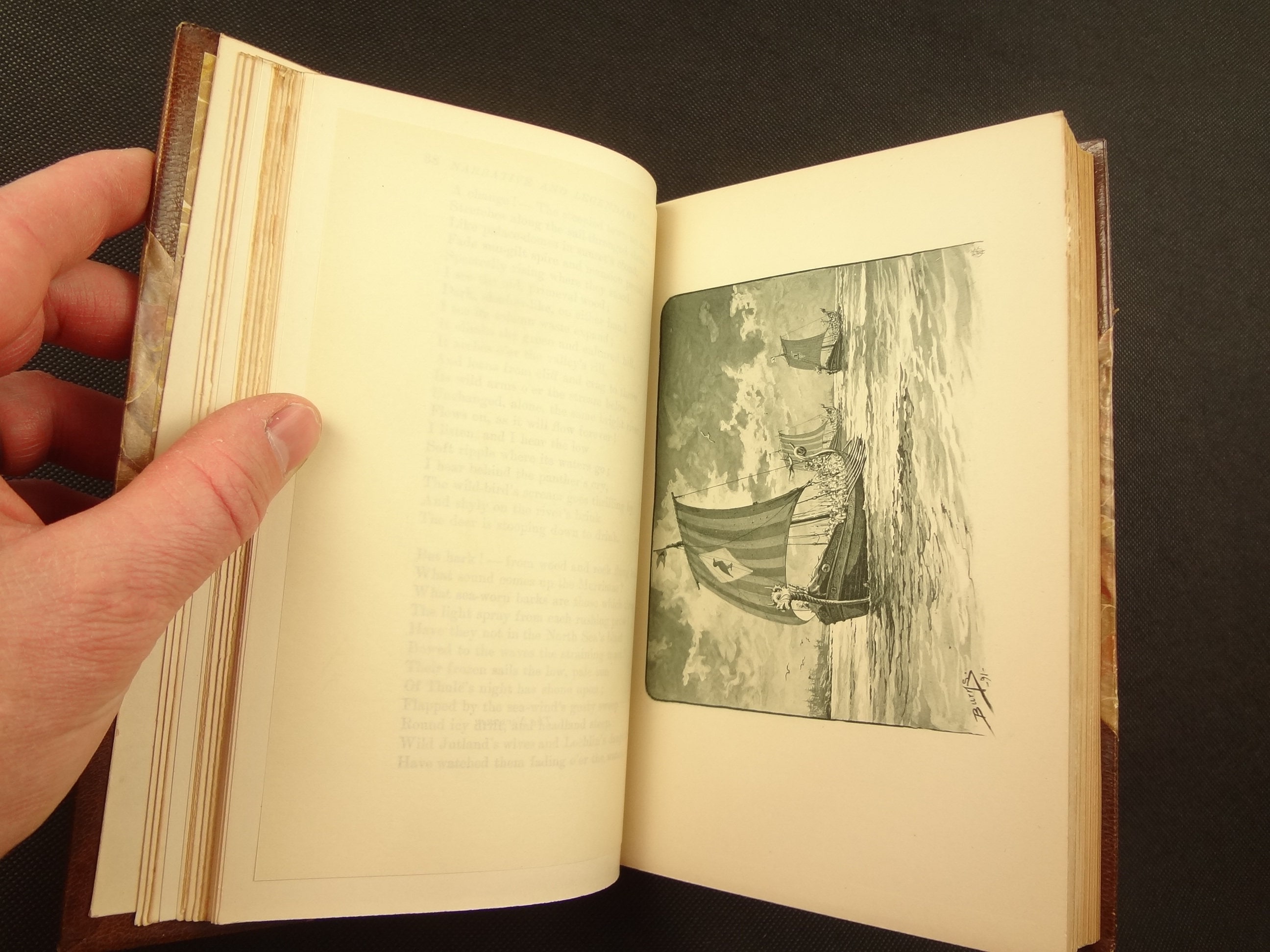 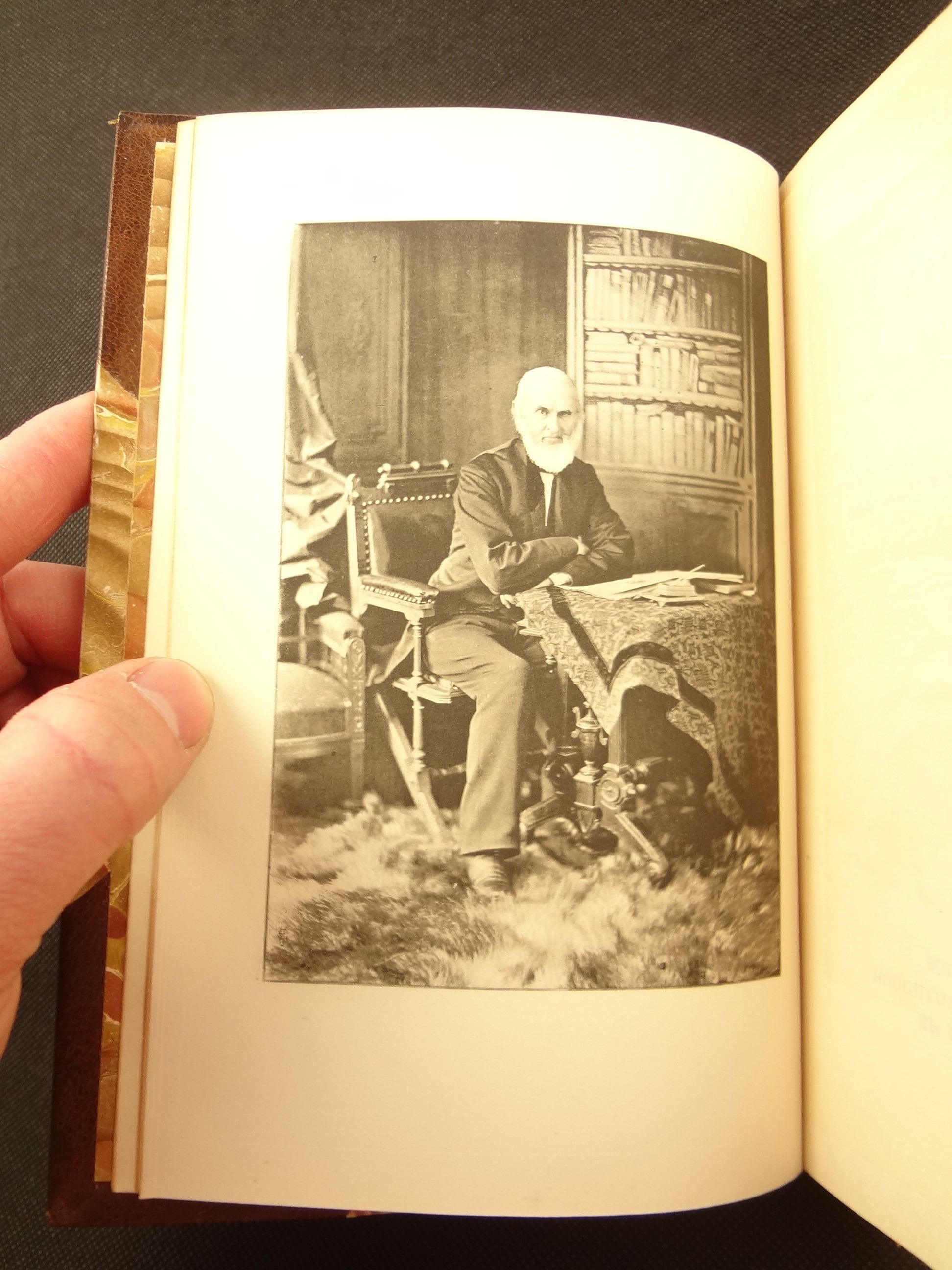 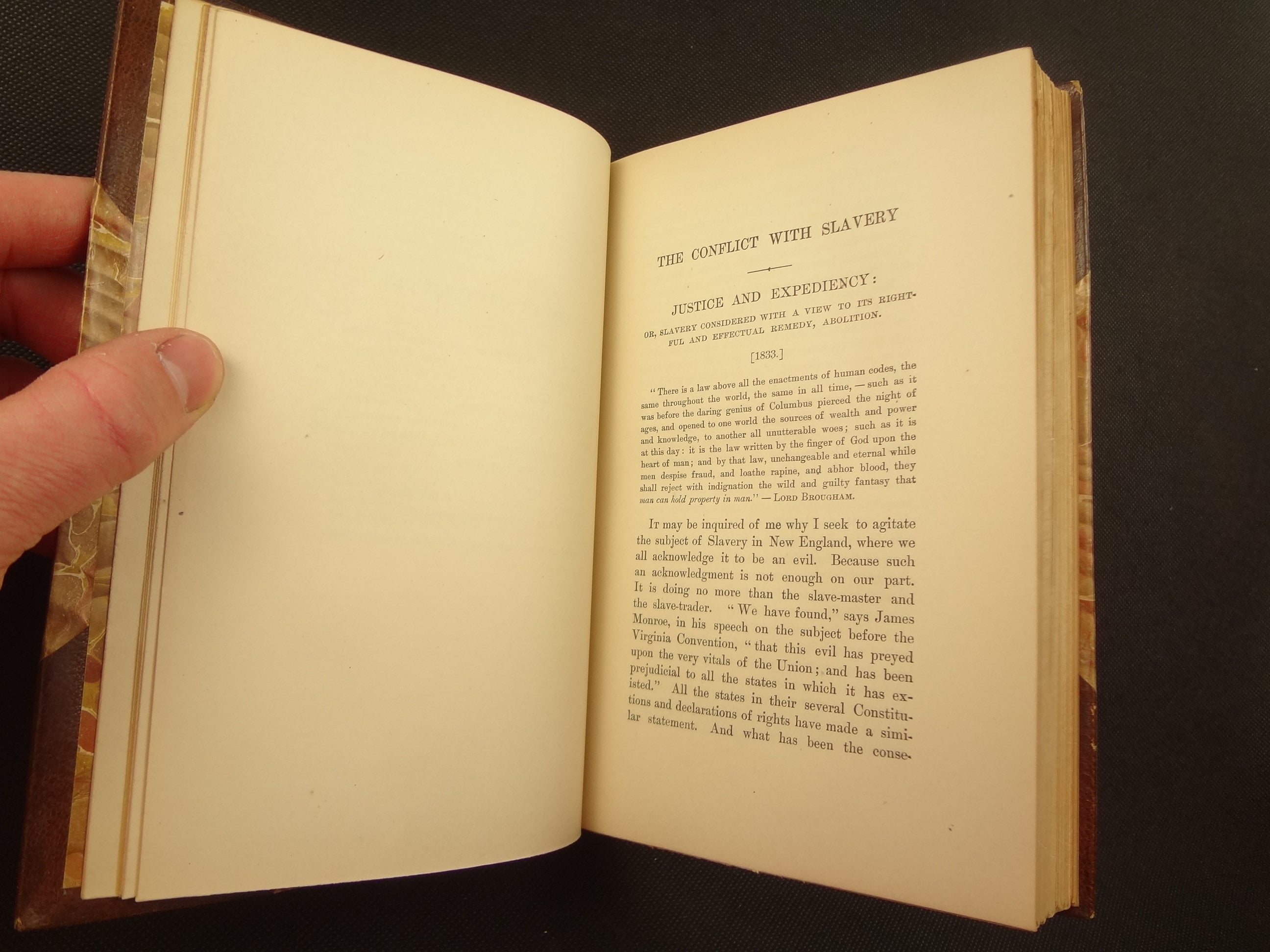 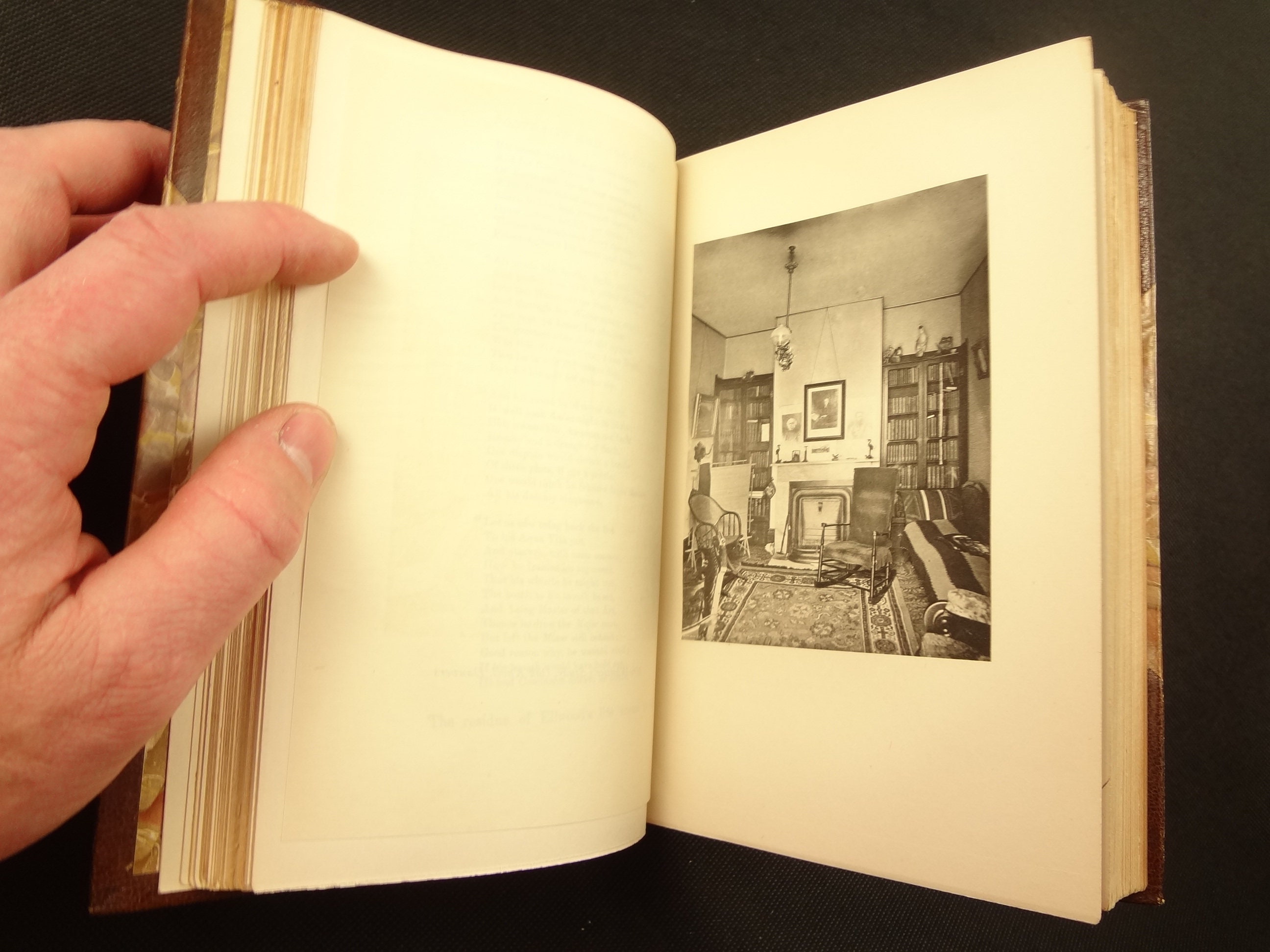 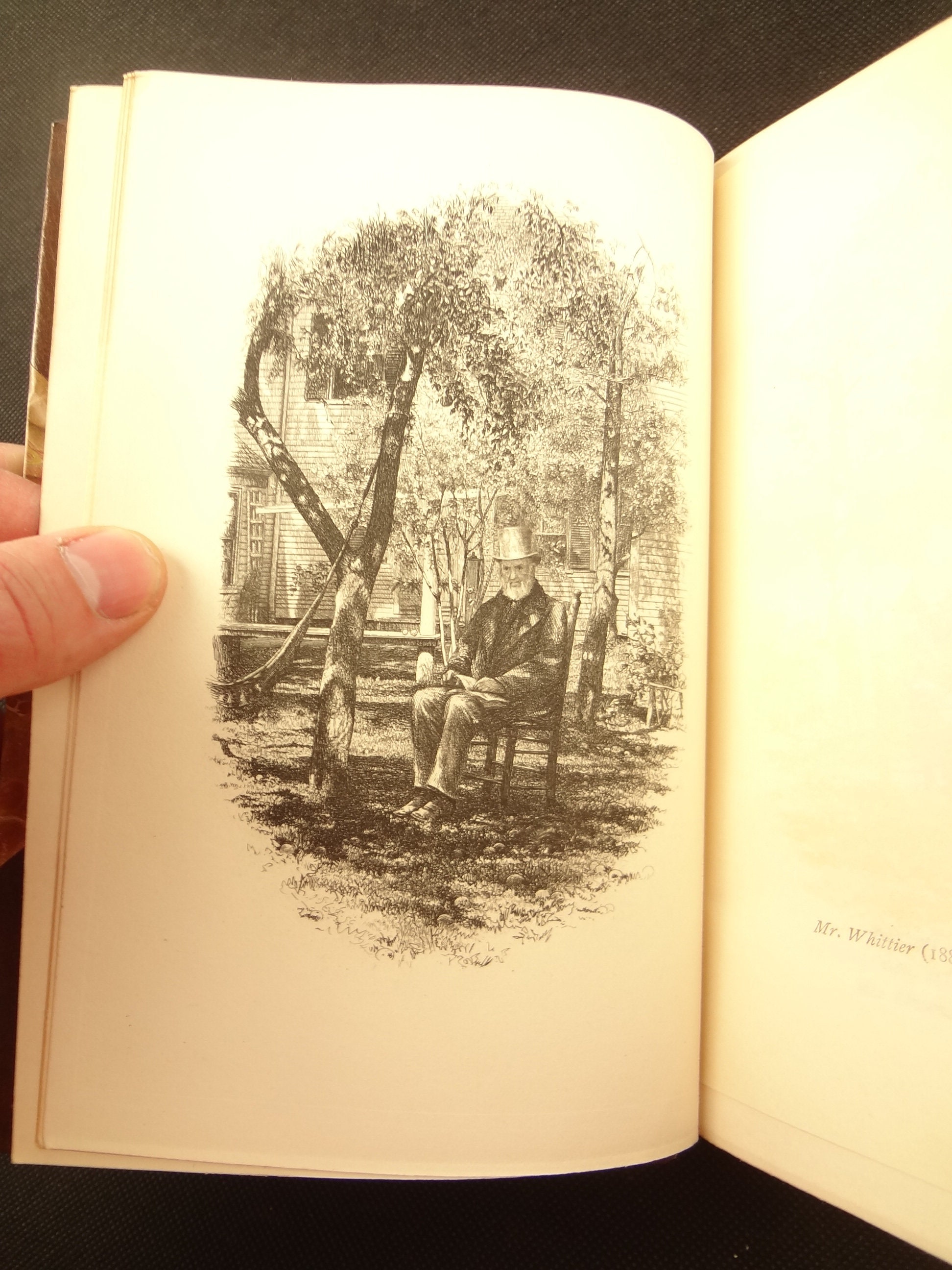 A handsome, finely bound, well-kept, complete works of John Greenleaf Whittier. Volumes one through four are poetical works. Volumes five through seven are prose works. The works include portraits, illustrations and facsimiles. These seven volumes are labelled the Amesbury Edition (1892) and are from Houghton's premium press, The Riverside Press (likely bound there as well; the Riverside Press had an on-site bindery).

About the Author and His Work -

John Greenleaf Whittier (December 17, 1807 – September 7, 1892) was an American Quaker poet and advocate of the abolition of slavery in the United States. Frequently listed as one of the Fireside Poets, he was influenced by the Scottish poet Robert Burns. Whittier is remembered particularly for his anti-slavery writings as well as his book Snow-Bound. Editor George Ripley found Whittier's poetry refreshing and said it had a "stately movement of versification, grandeur of imagery, a vein of tender and solemn pathos, cheerful trust" and a "pure and ennobling character". Boston critic Edwin Percy Whipple noted Whittier's moral and ethical tone mingled with sincere emotion. He wrote, "In reading this last volume, I feel as if my soul had taken a bath in holy water."

Whittier was particularly supportive of women writers, including Alice Cary, Phoebe Cary, Sarah Orne Jewett, Lucy Larcom, and Celia Thaxter. He was especially influential on prose writings by Jewett, with whom he shared a belief in the moral quality of literature and an interest in New England folklore. Jewett dedicated one of her books to him and modeled several of her characters after people in Whittier's life.

Each measures approximately 20 x 13 x 3 cm (8to). Although many consider this binding 3/4 leather, based on actual leather coverage I would claim them 1/2 leather. Marbled boards and endpapers. Top edge gilt. Spines have elaborate gilt decoration, with five raised bands; the title, volume and a description of the works within are found within various spine compartments in gilt. Alternating white and blue endbands.

See pictures. Bindings have a little wear, and when there is wear it is normally at a edge/corner; they are handsome. Internally there are no ex libris marks, there is no writing, and no tears. The hinges and joints are good, with no cracks. A nice set. They have been well-kept as evidenced by the white and blue alternating endbands at the top of the spines which have retained their color nicely (not dust stained brown, as is often common).