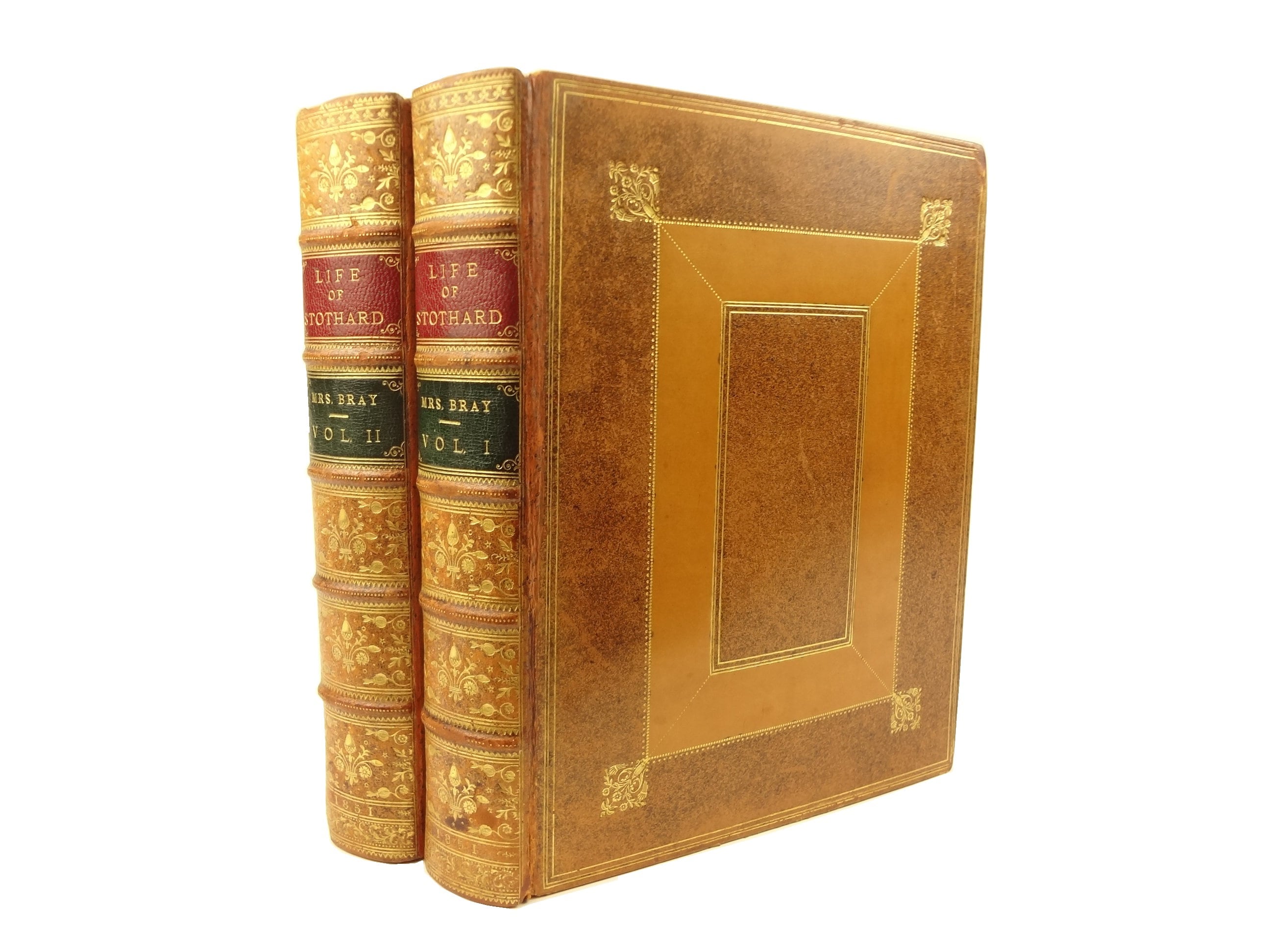 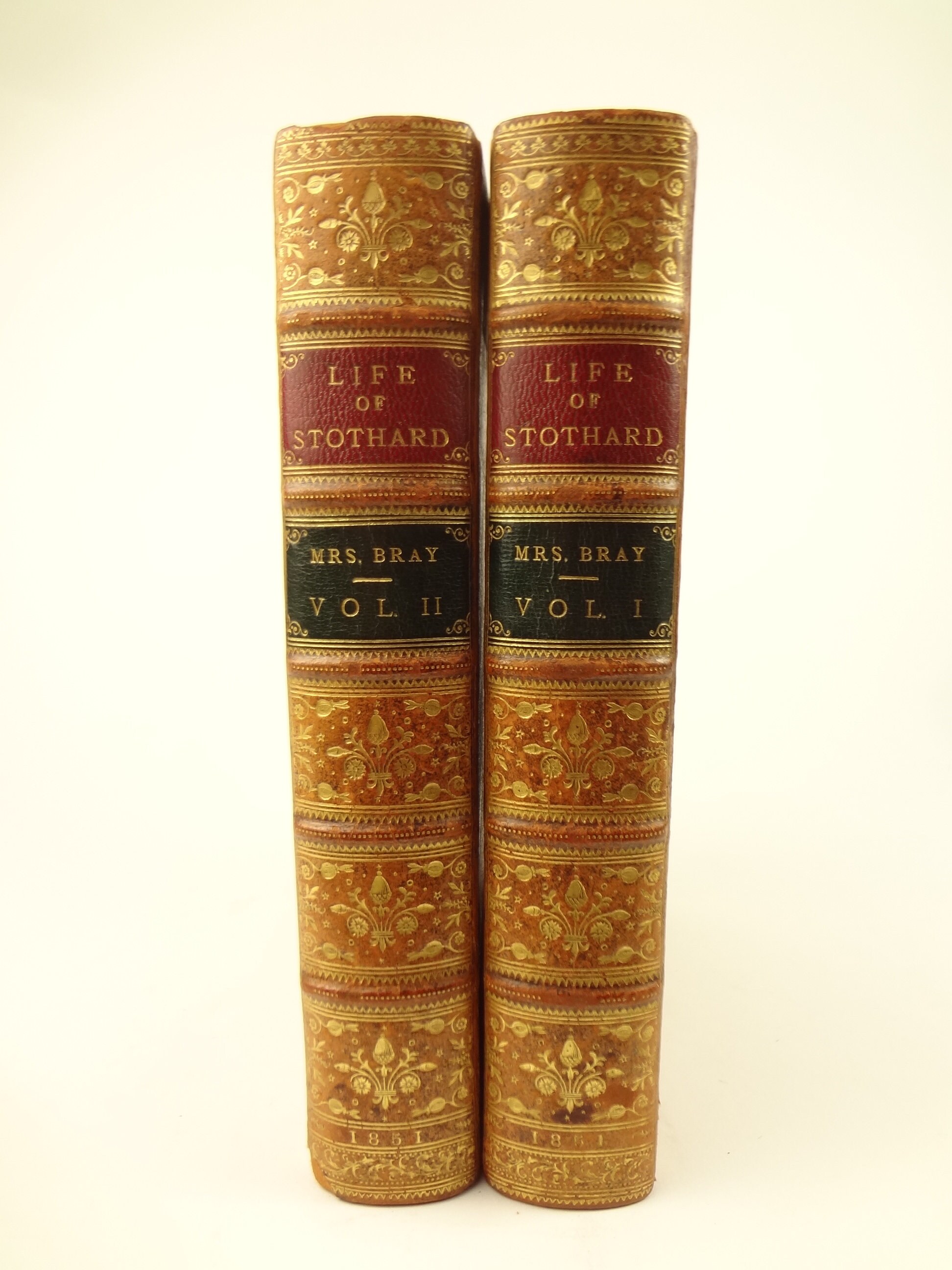 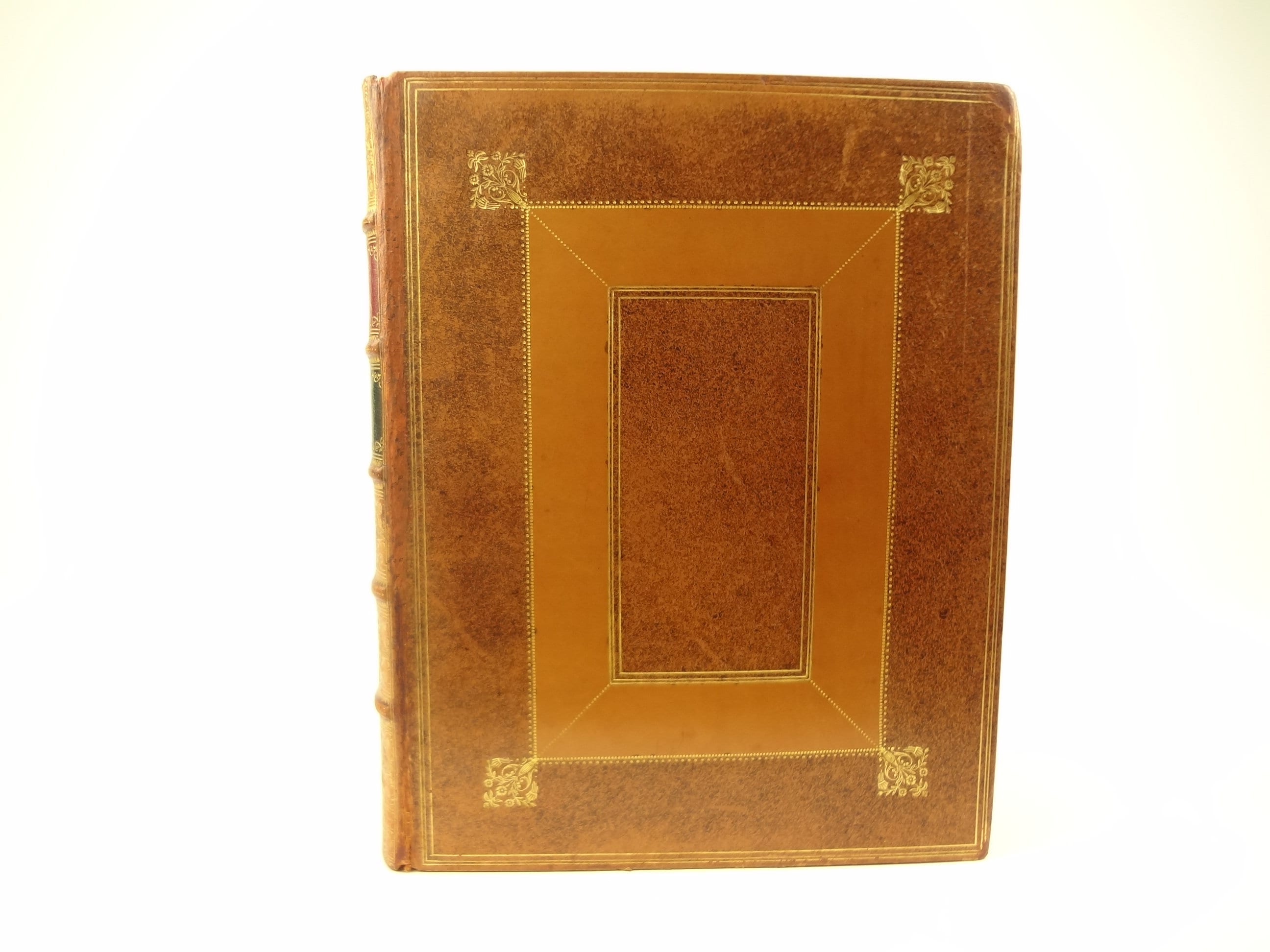 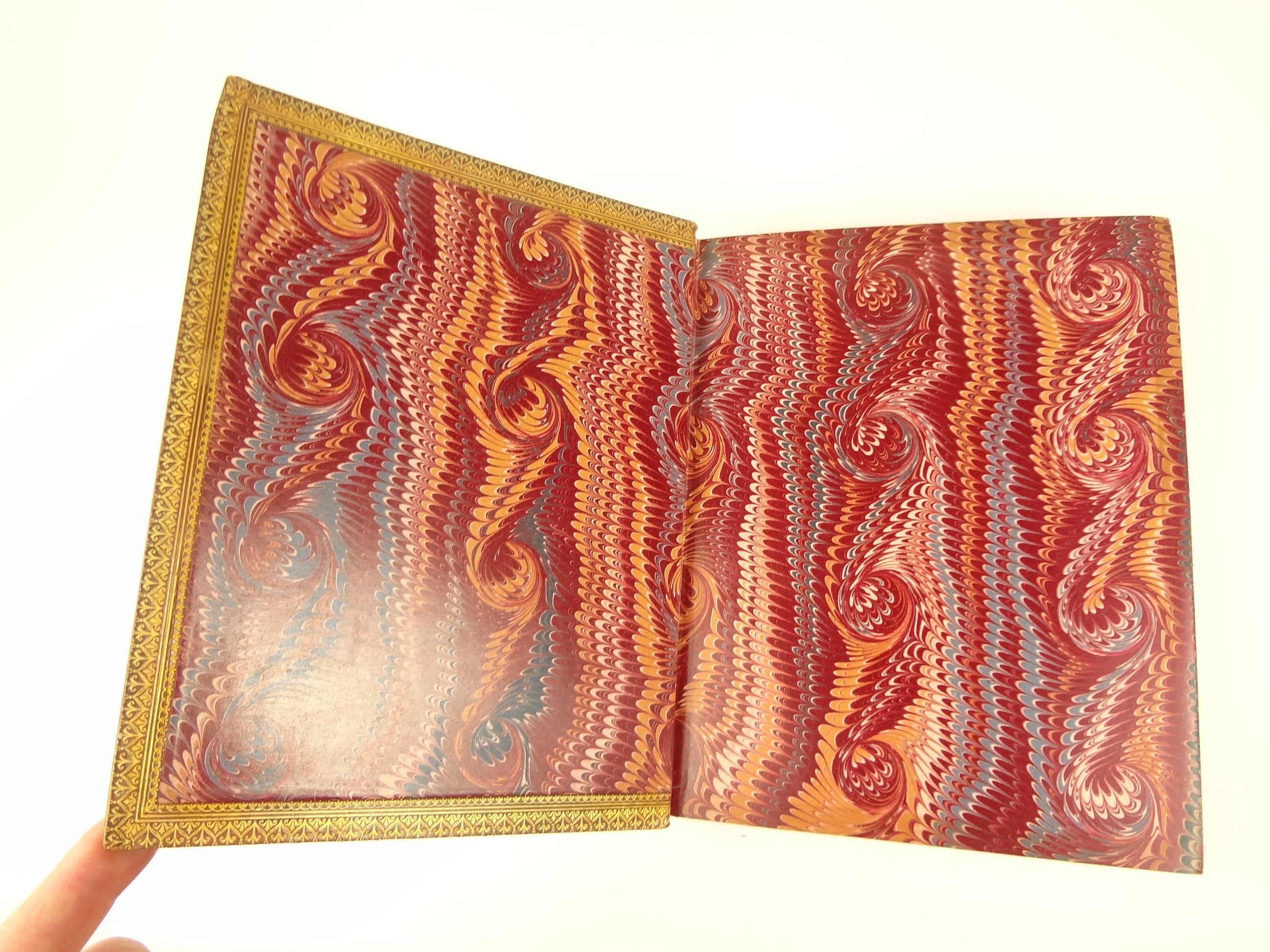 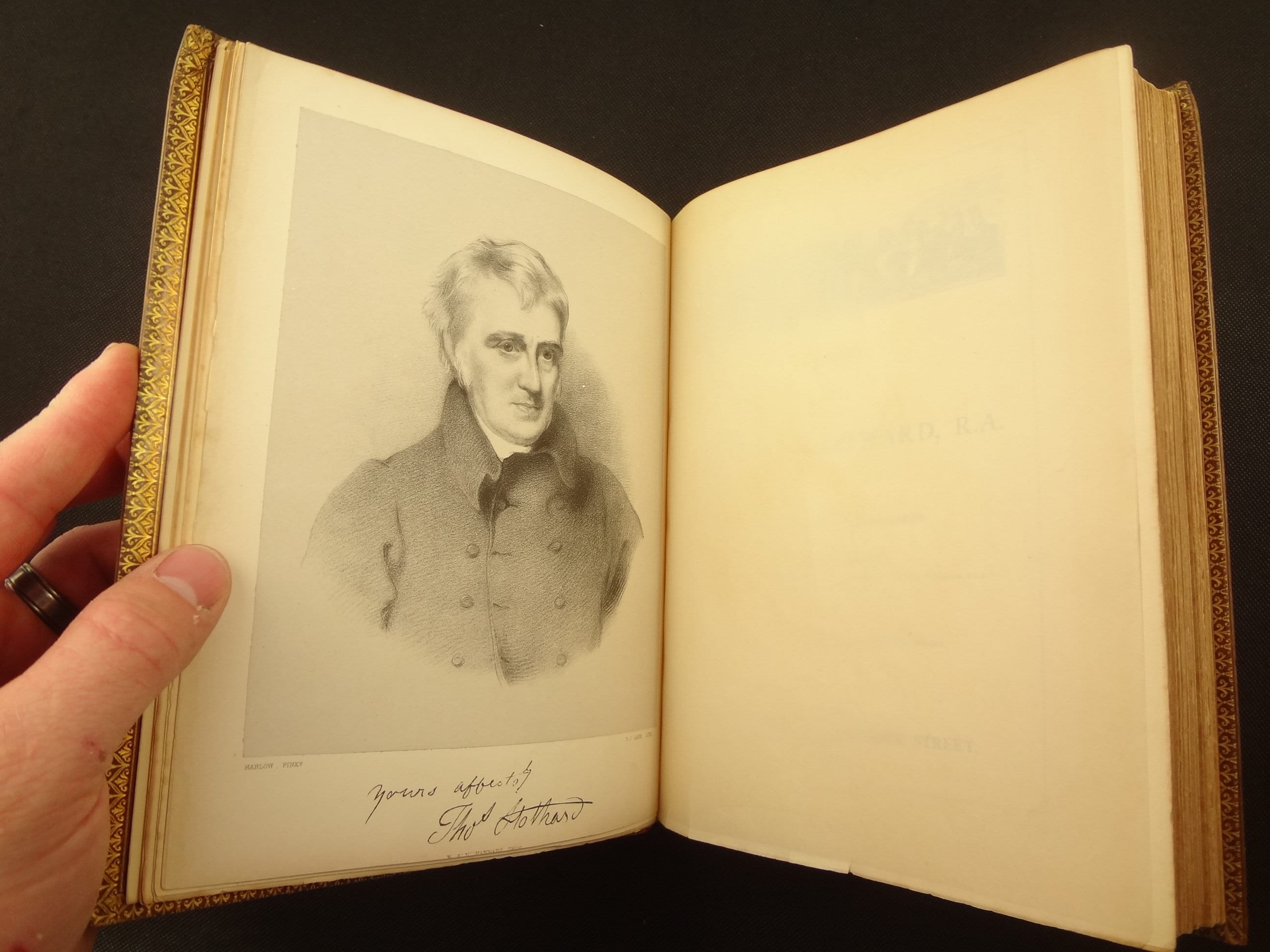 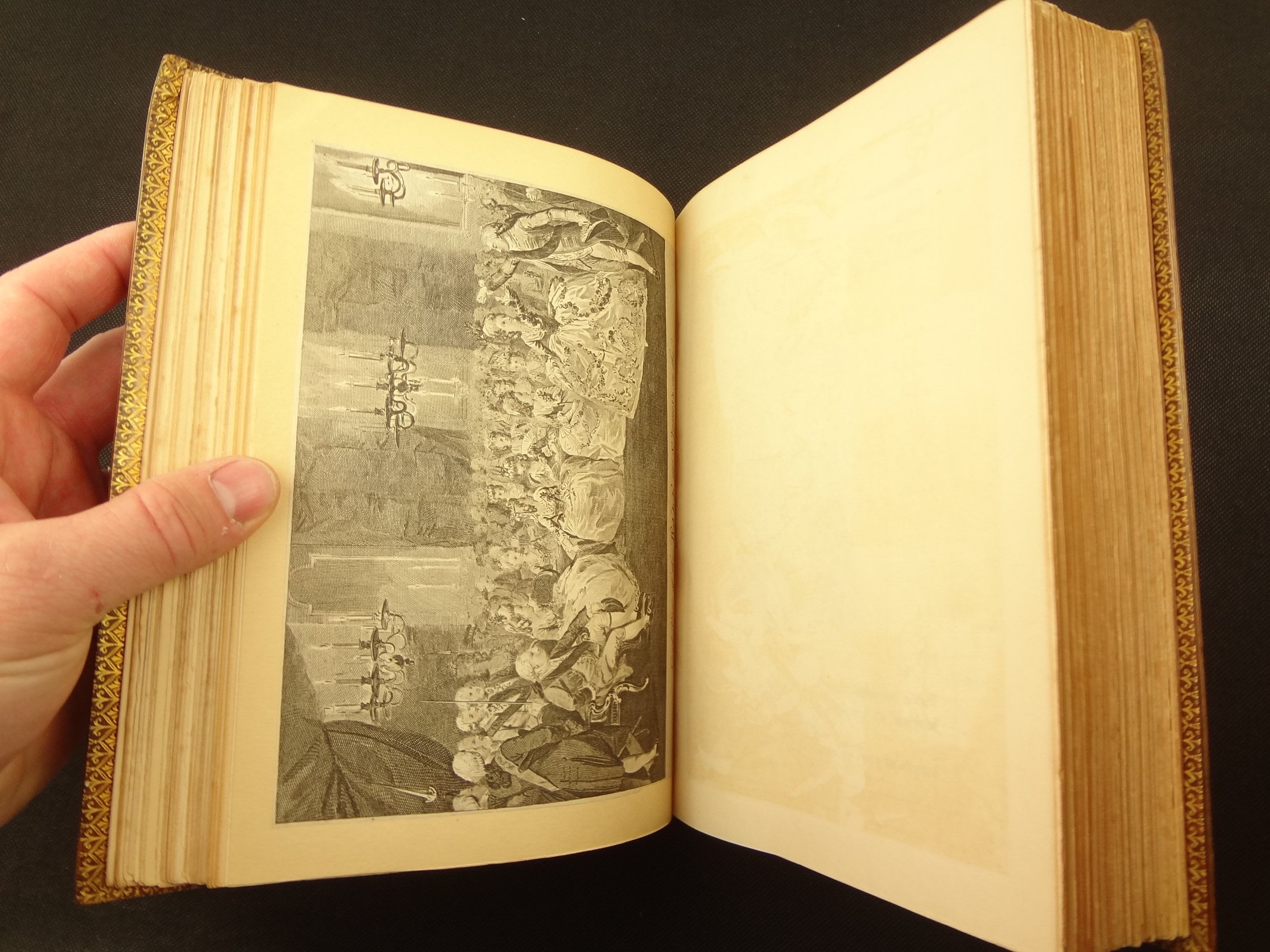 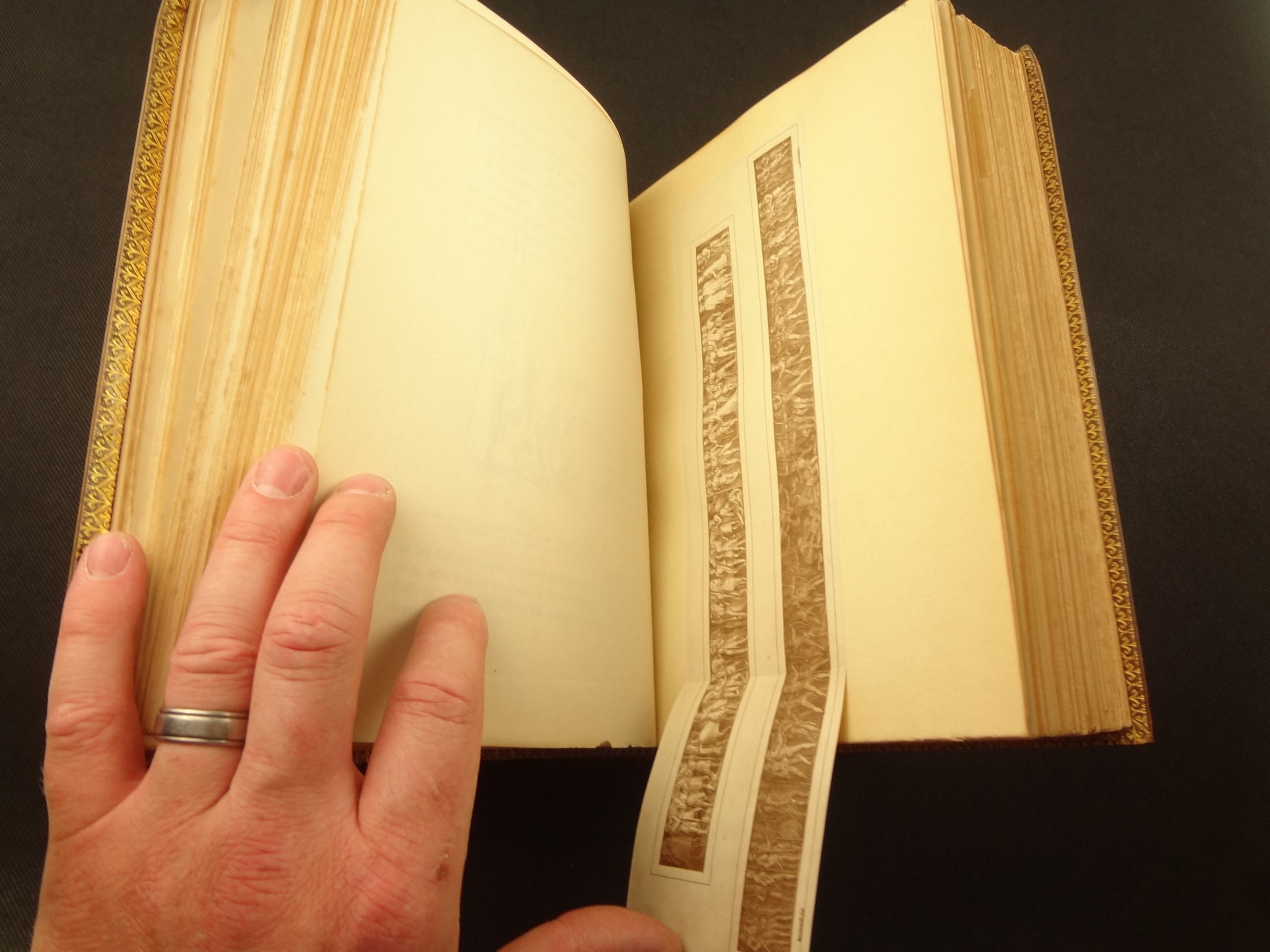 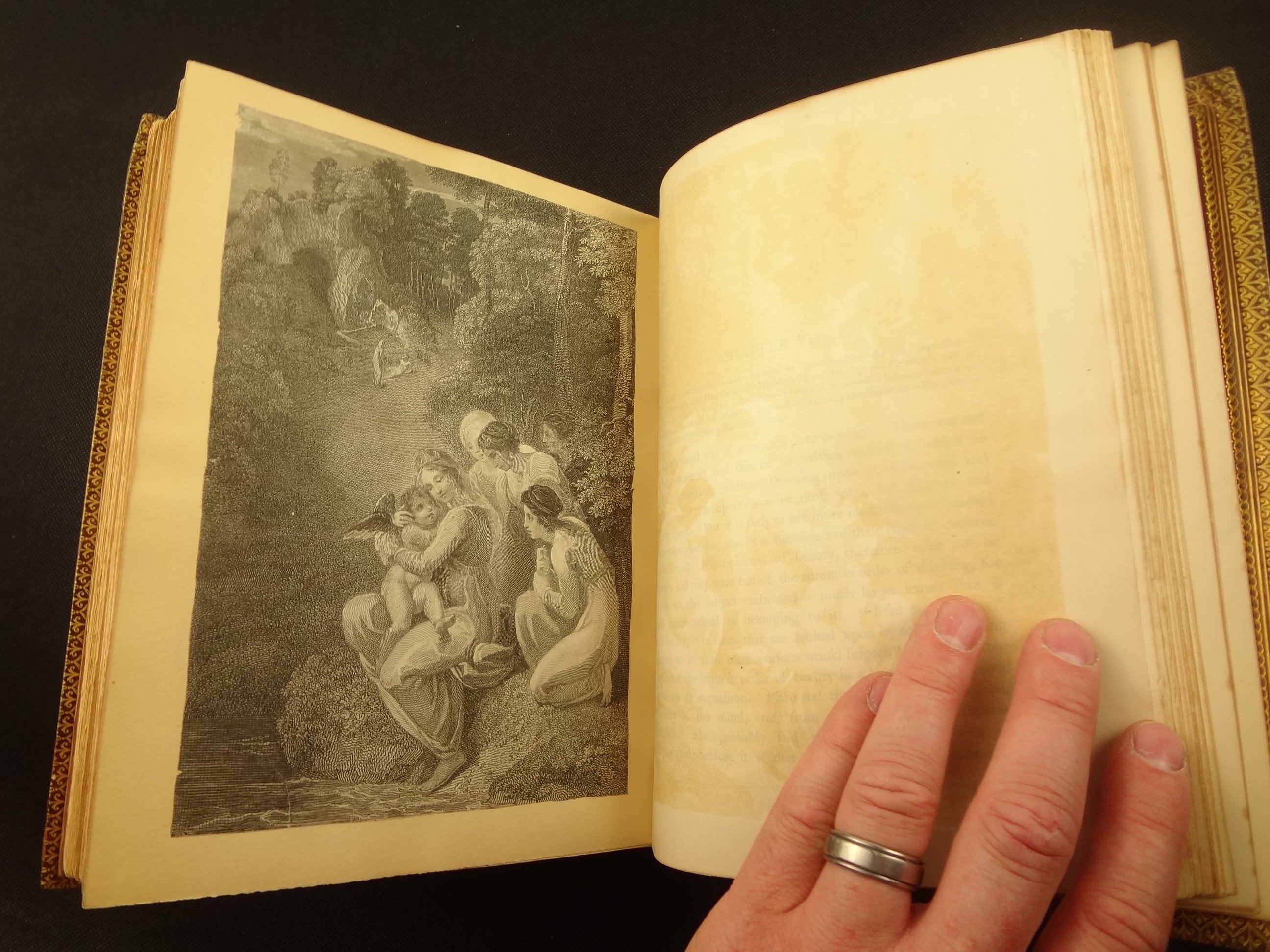 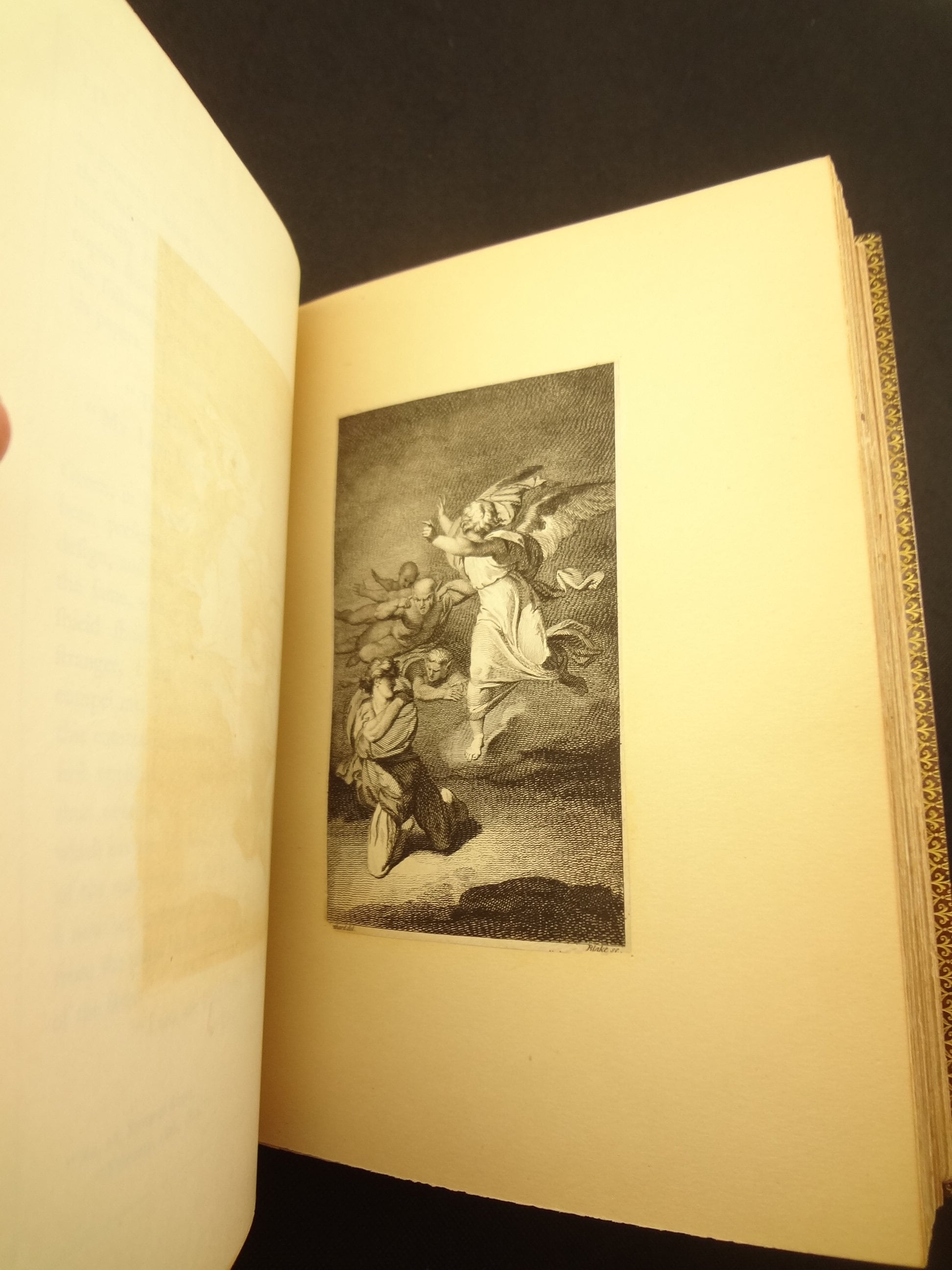 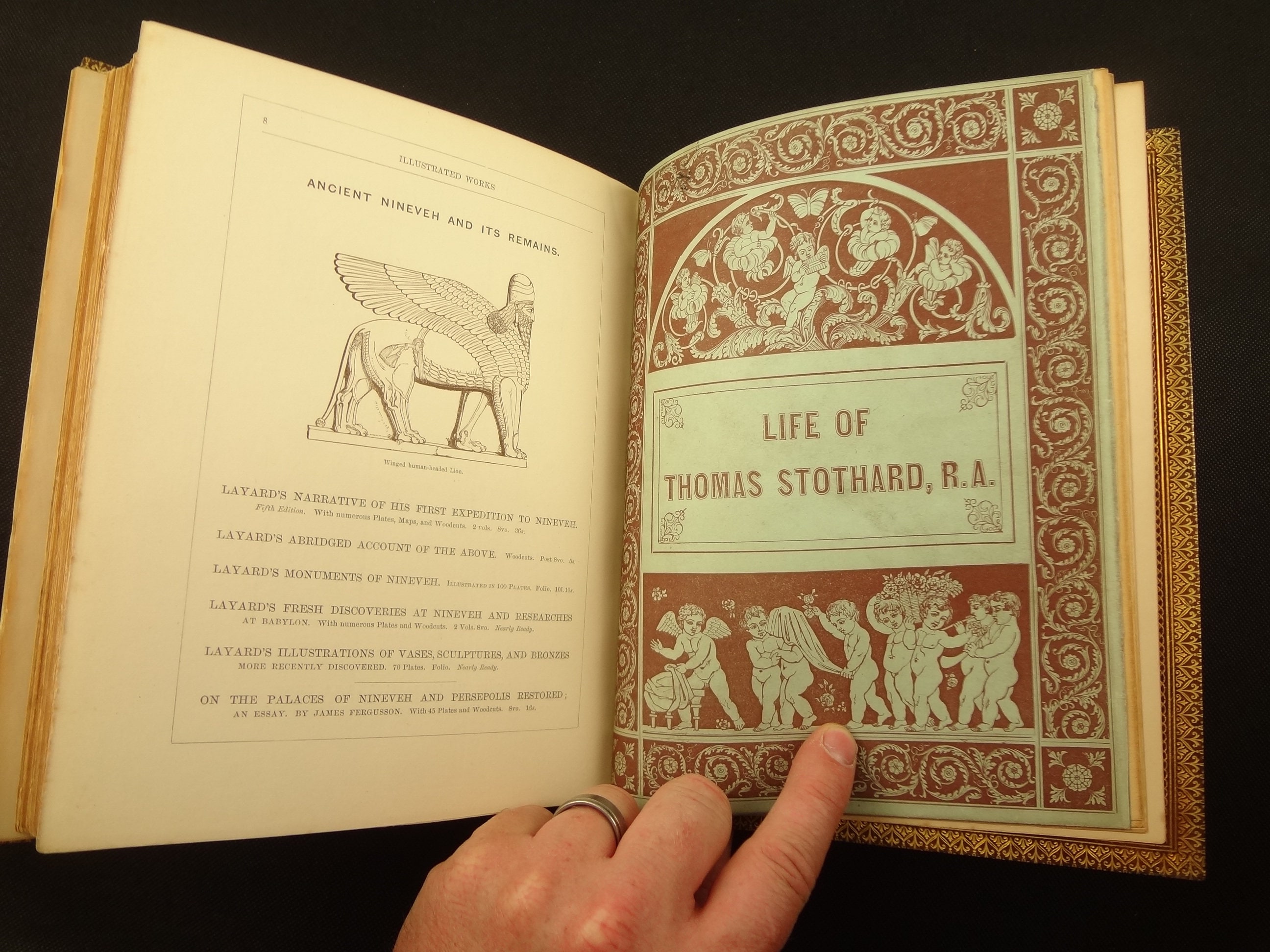 An extra-illustrated edition of Mrs. Bray's 1851 Life of Stothard, with 126 added plates taken from other books (all after Stothard); at least three of the plates were executed by William Blake, including two states of Clarence's Dream. The "Grangerized" engravings were mounted and then bound into these volumes by L. Broga, whose stamp is found at the rear of the flyleaves.

Many of the engravings of Stothard's works are by Heath. I was unable to reference all of the plates, but I did see examples from: Economy of Human Life, Stern Reflections, Moore's Melodies, Robinson Crusoe, Harding's Shakespeare, Astolpho, the Decameron, Rokeby and Don Quixote.

The author, Mrs. (Anna) Bray married Charles Alfred Stothard, son of the distinguished painter Thomas Stothard R. A. They travelled to France, and her first work consisted of Letters written during a Tour in Normandy, Brittany, &c., in 1818. As an artist, her husband was devoted to illustrating the sculptured monuments of Great Britain, but on 28 May 1821 he died from falling off a ladder in St Andrew's Church, Bere Ferrers, Devon, while collecting materials for his work, The Monumental Effigies of Great Britain. In 1823 she produced a memoir of her late husband, and she undertook to complete the book he had left unfinished, with the aid of her brother Alfred John Kempe. She eventually achieved this and the work was published in 1832. Many years later she provided the Gentleman's Magazine and Blackwood's Magazine with reminiscences of her father-in-law, Thomas Stothard, R. A., and these were afterwards (1851) expanded into a life of that artist.

Each volume measures approx. 22 x 18 x 3.5 cm. Calf, sprinkled, in the Cambridge style. Five ribs to spine, with title and author in gilt on Moroccan overlays; "1851" in gilt at bottom of spine, gilt acorn motif in the other four compartments.Tri-colored endbands. Marbled endpapers. Pages volume one - 104. Pages volume two - 105 to 246, with advertisements at the end. Extra-illustrated with 126 additional plates taken from other books. The original paper boards are also bound in.

See pictures. Handsome set. A little shelf wear with light rubbing. Difficult to see repair at front joints (Japan tissue painted to match). Small chips at top and bottom of Vol. 2 spine. Top corners of Vol. 1 boards lightly bumped. Pencil bookseller and binder notes on the unpaginated blank endpapers. Some of the plates have a note on the backs. Plate at page 71 has "E. Middleton" written on the bottom edge. Very occasional yellow spot. Some of the pages in Volume 1 have the very top right corner with a crease. Tissue guards in place.