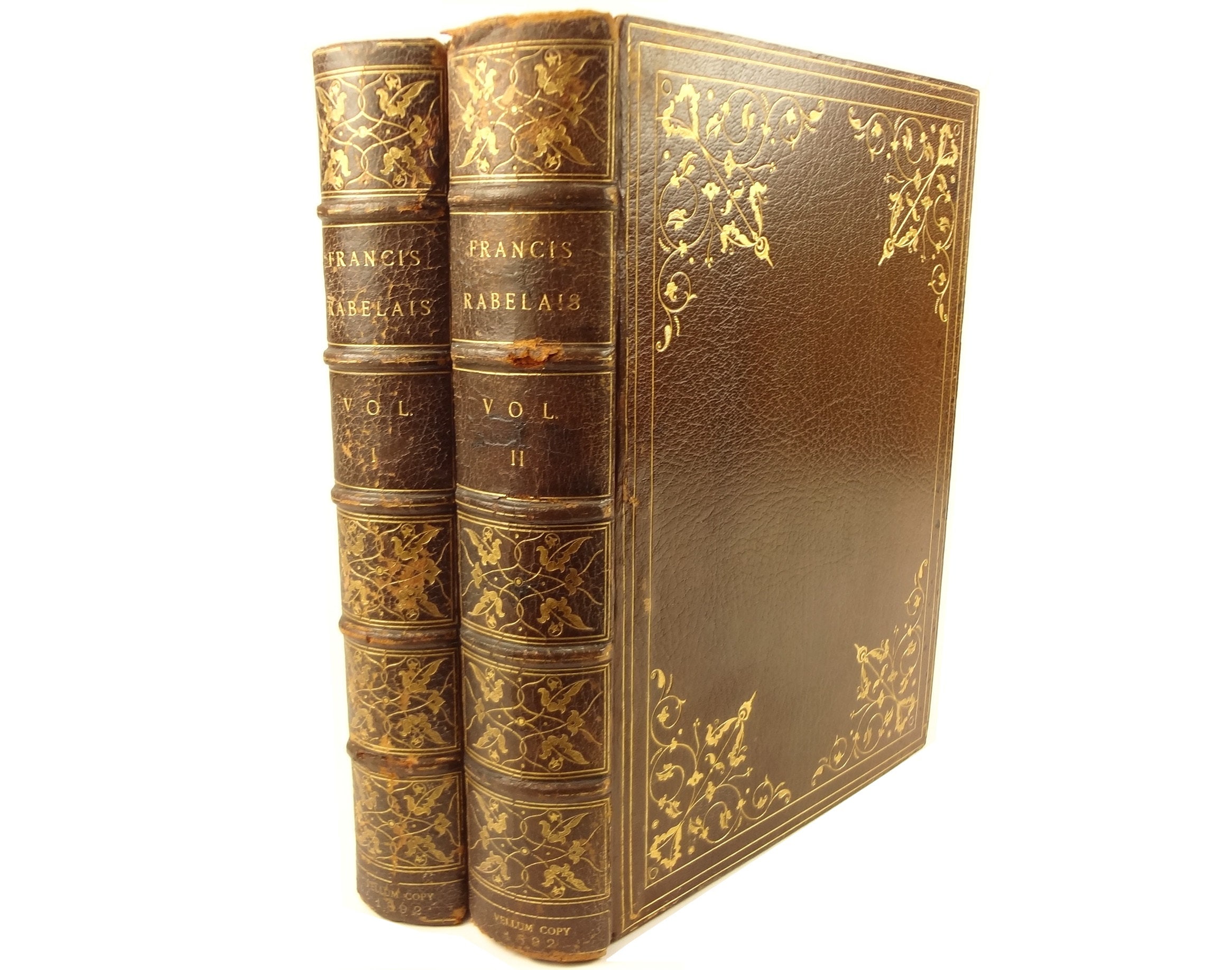 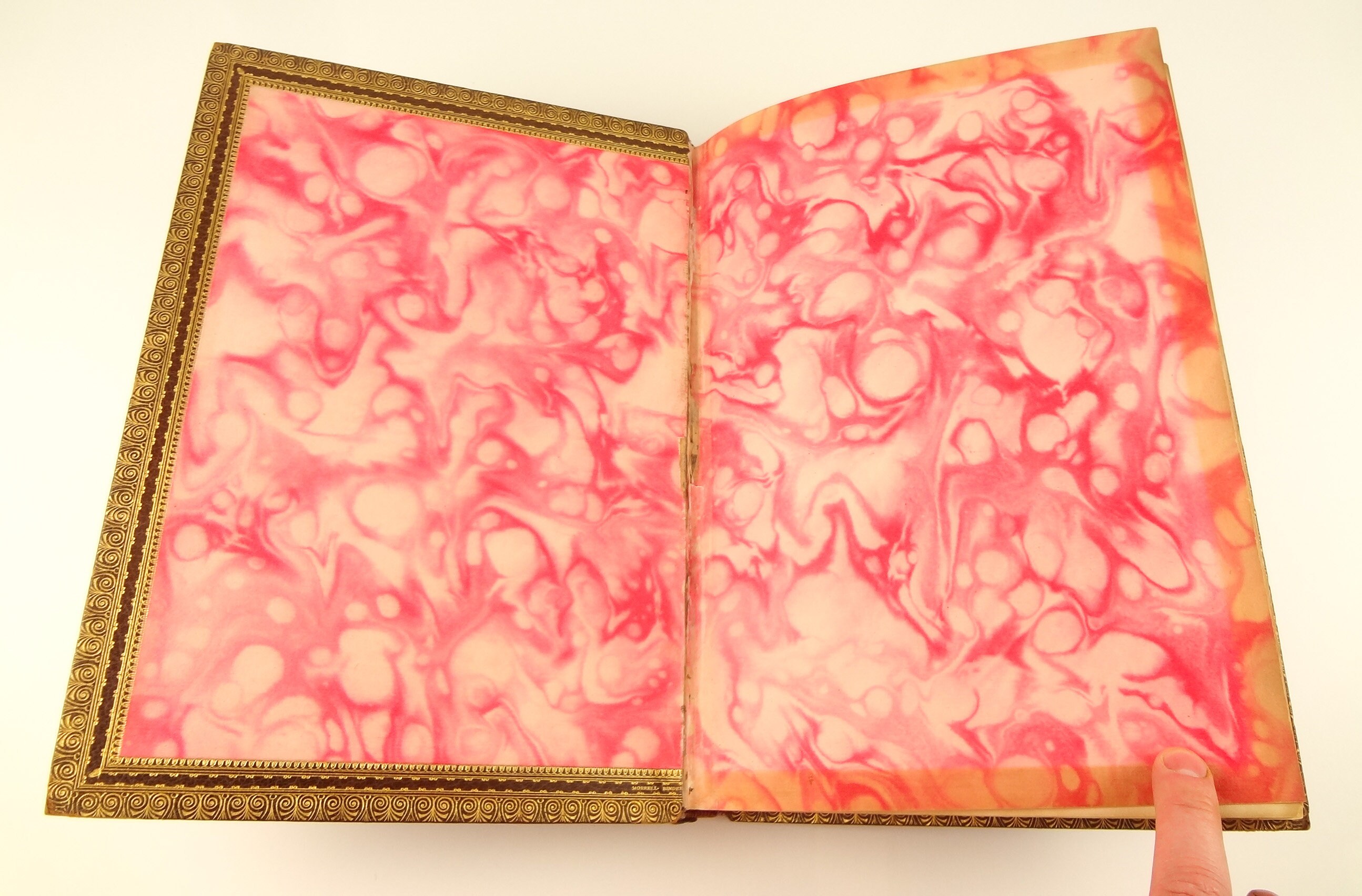 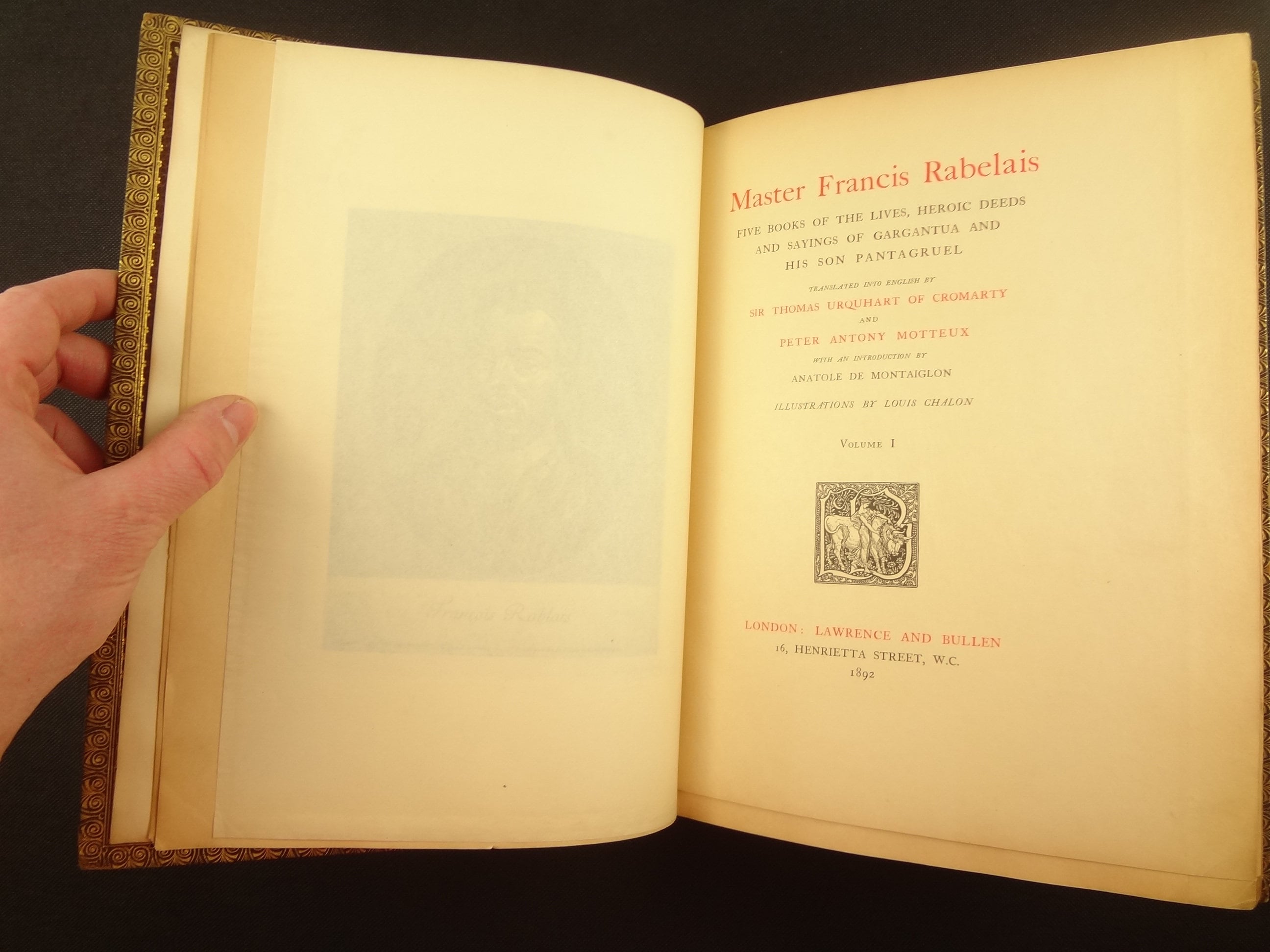 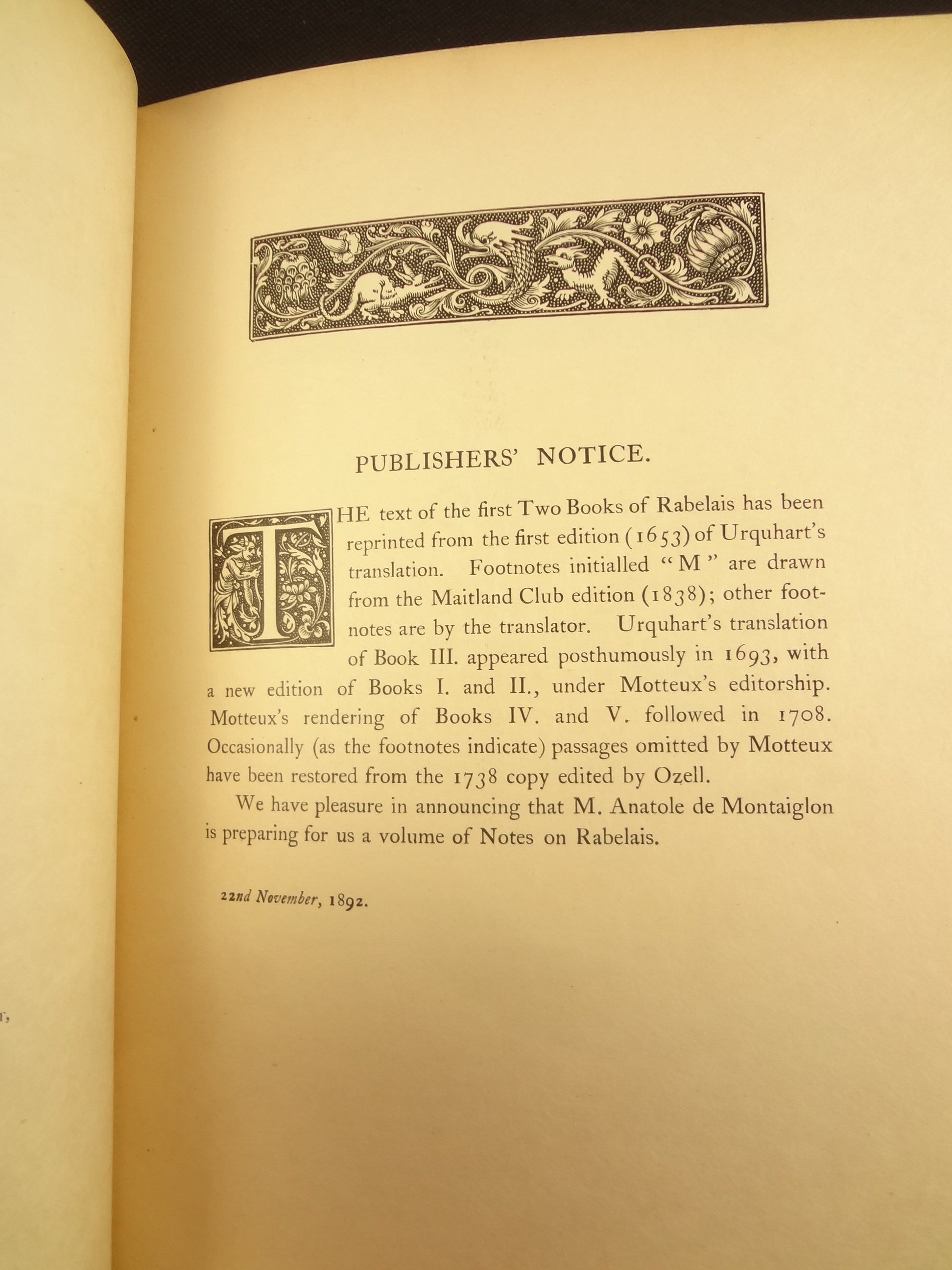 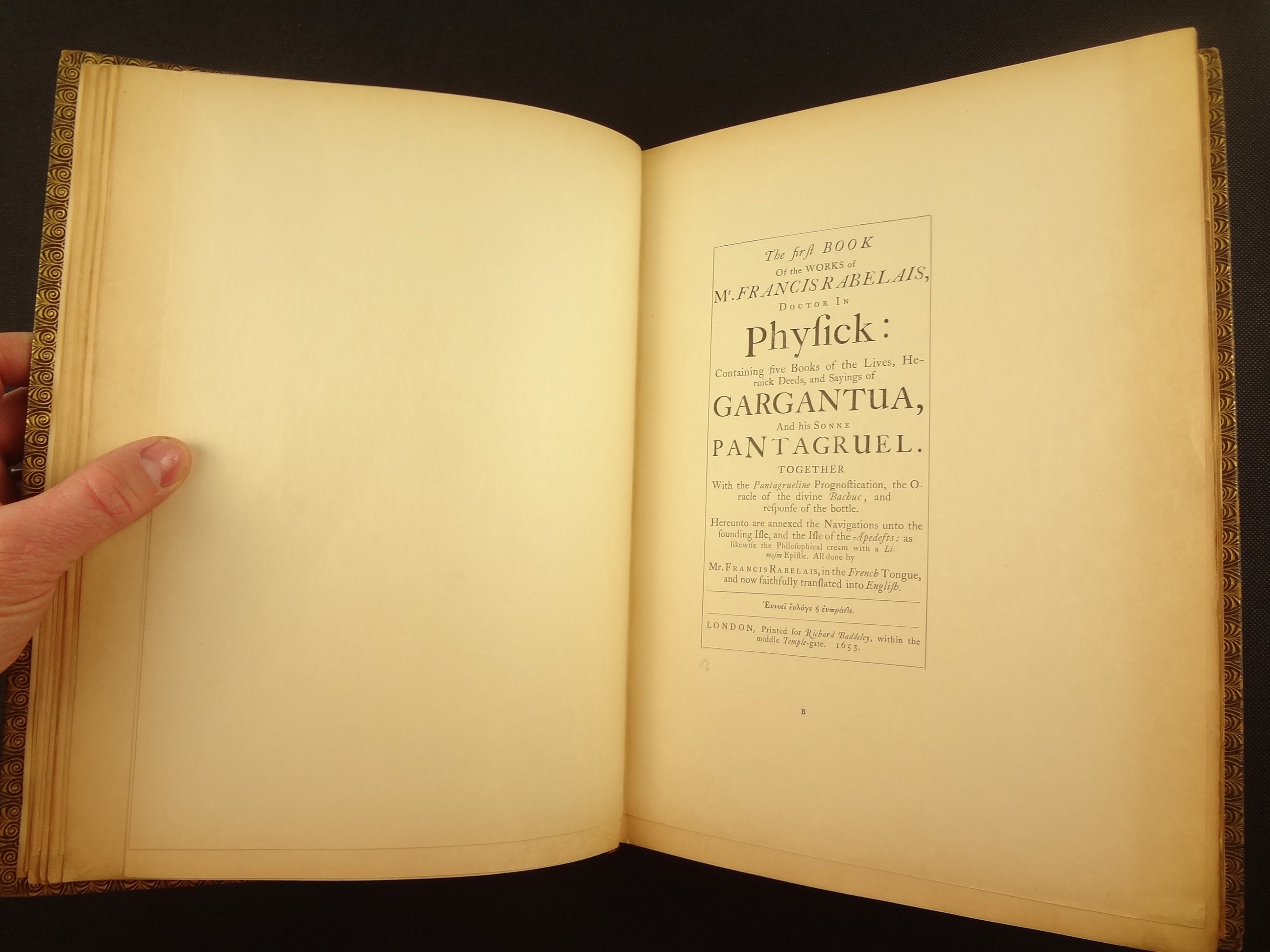 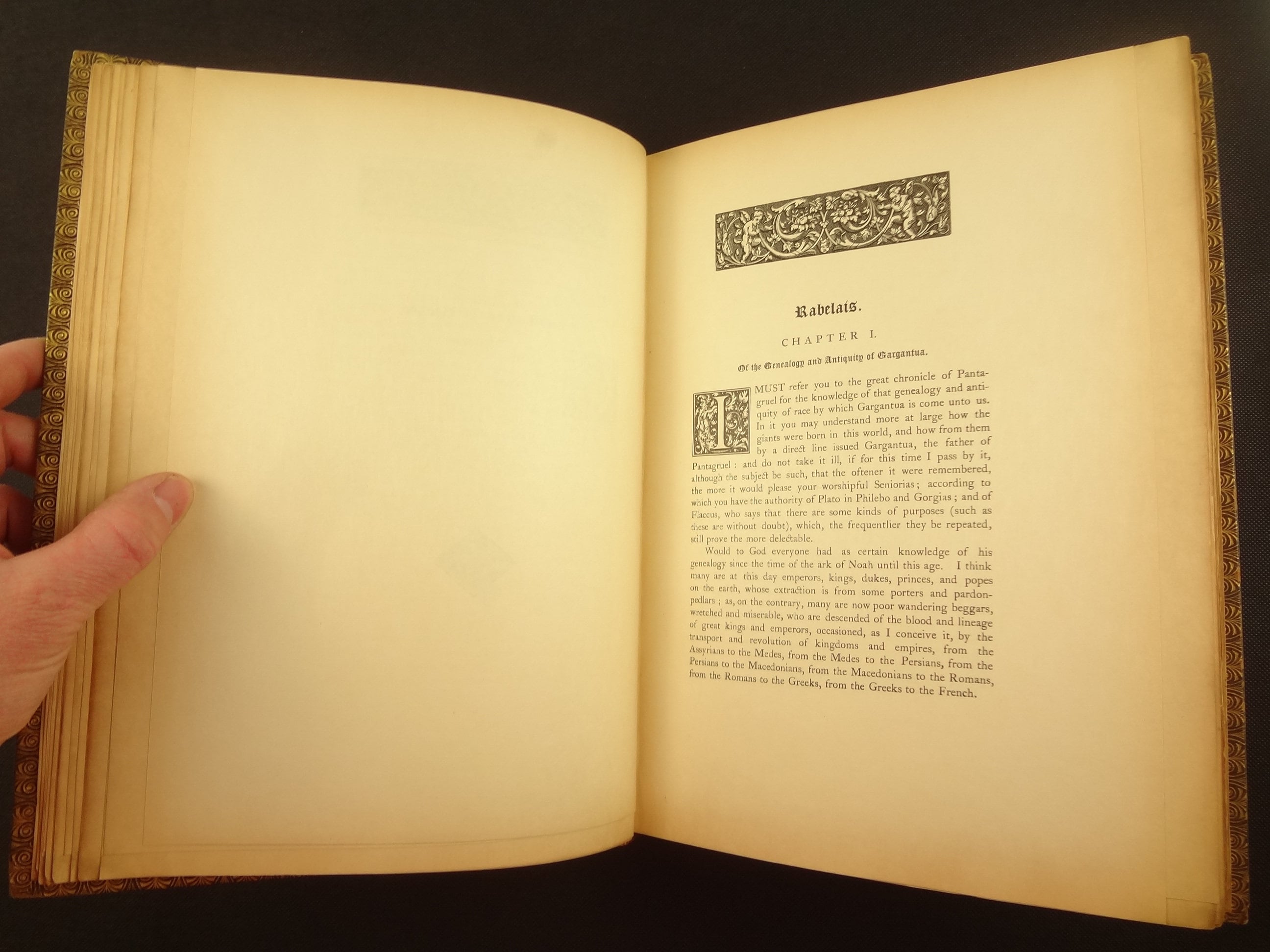 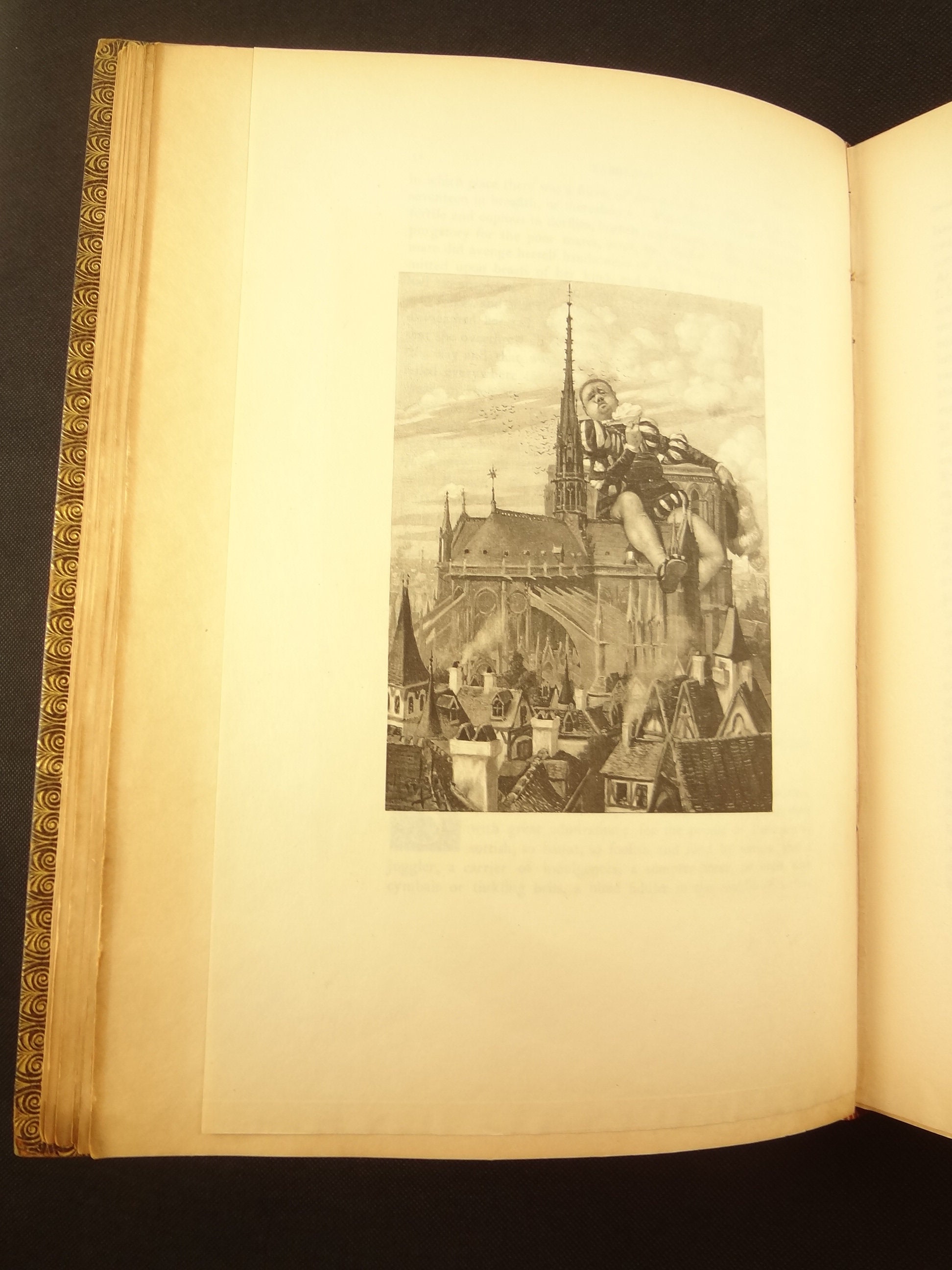 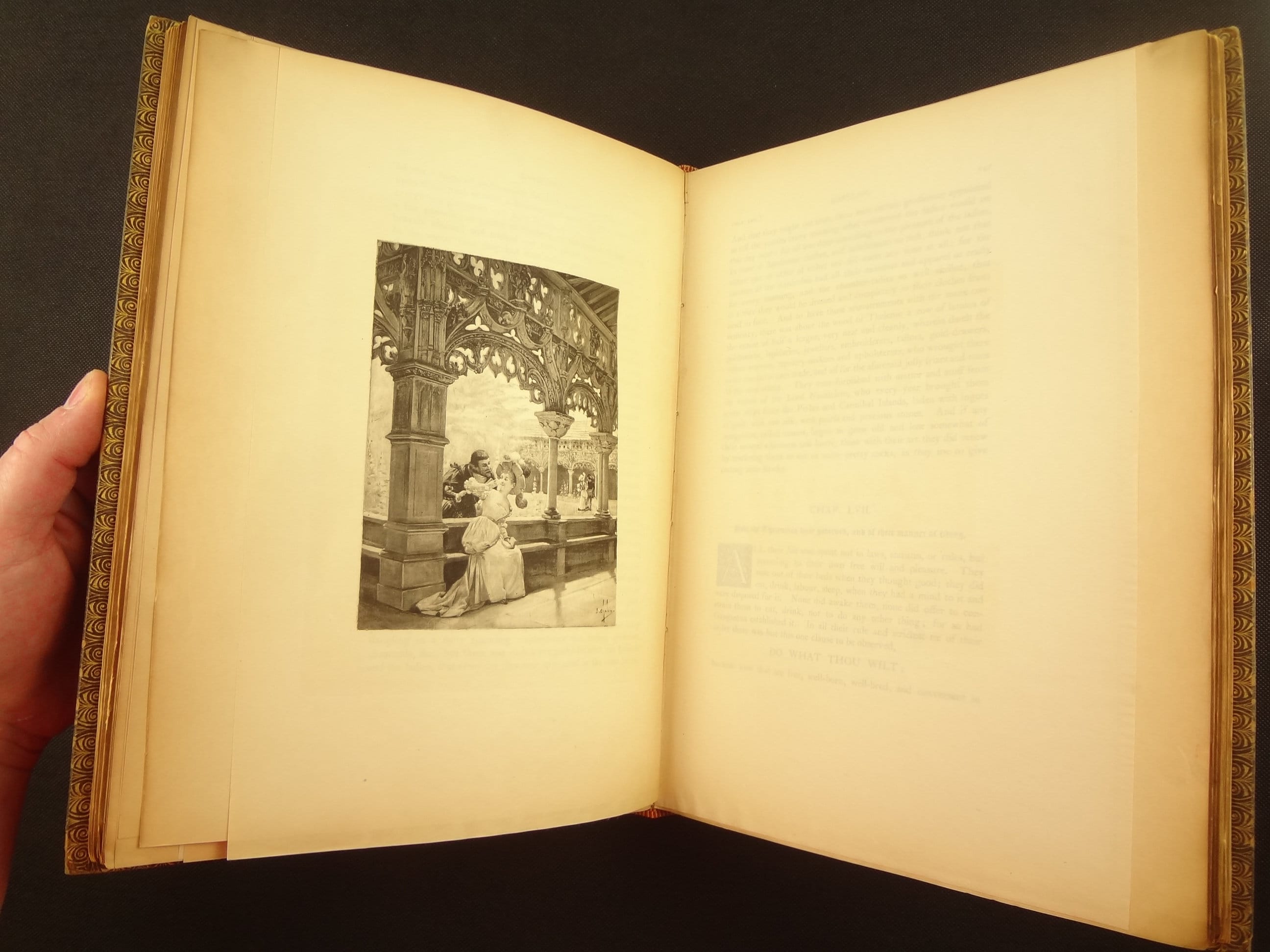 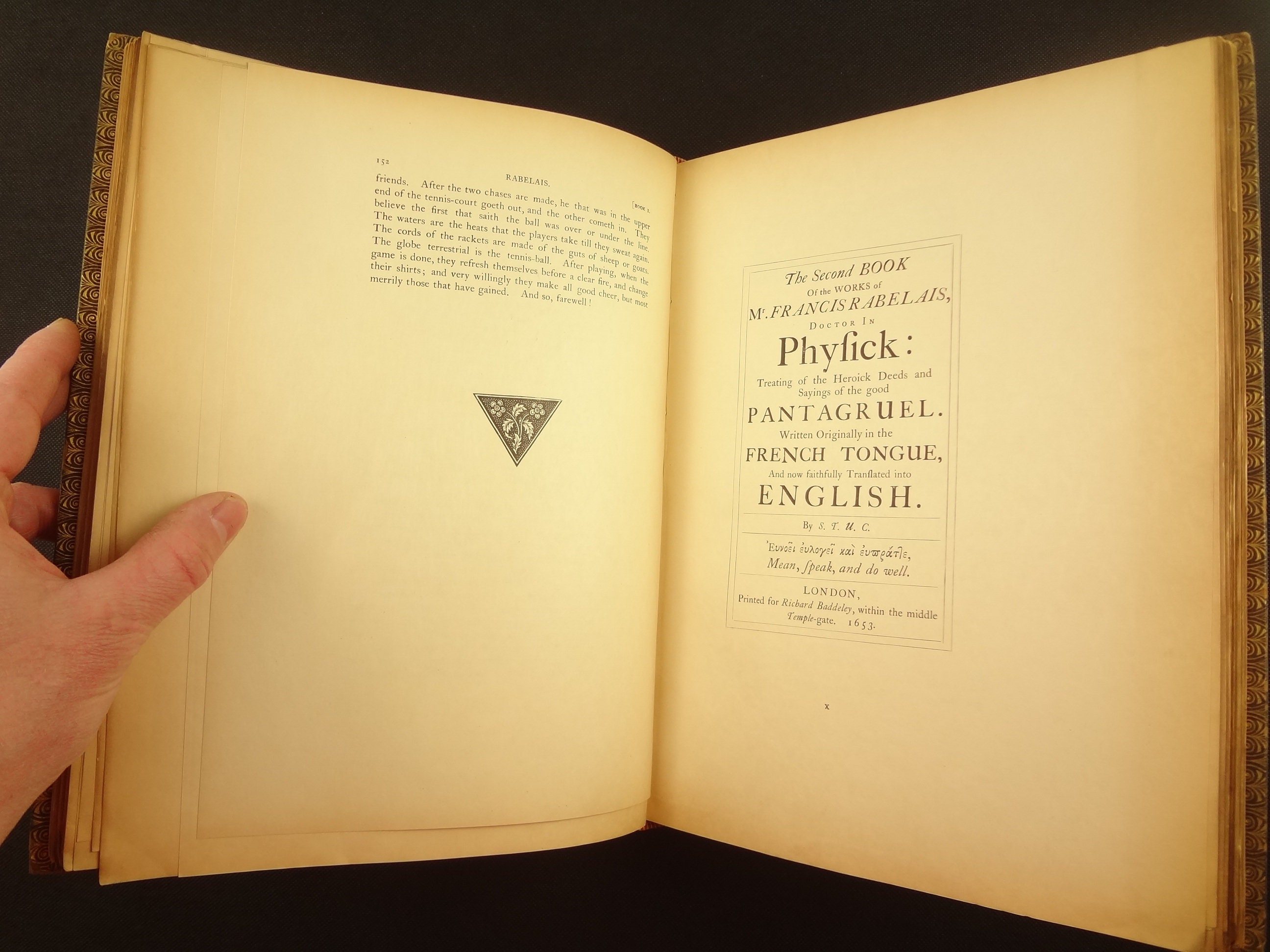 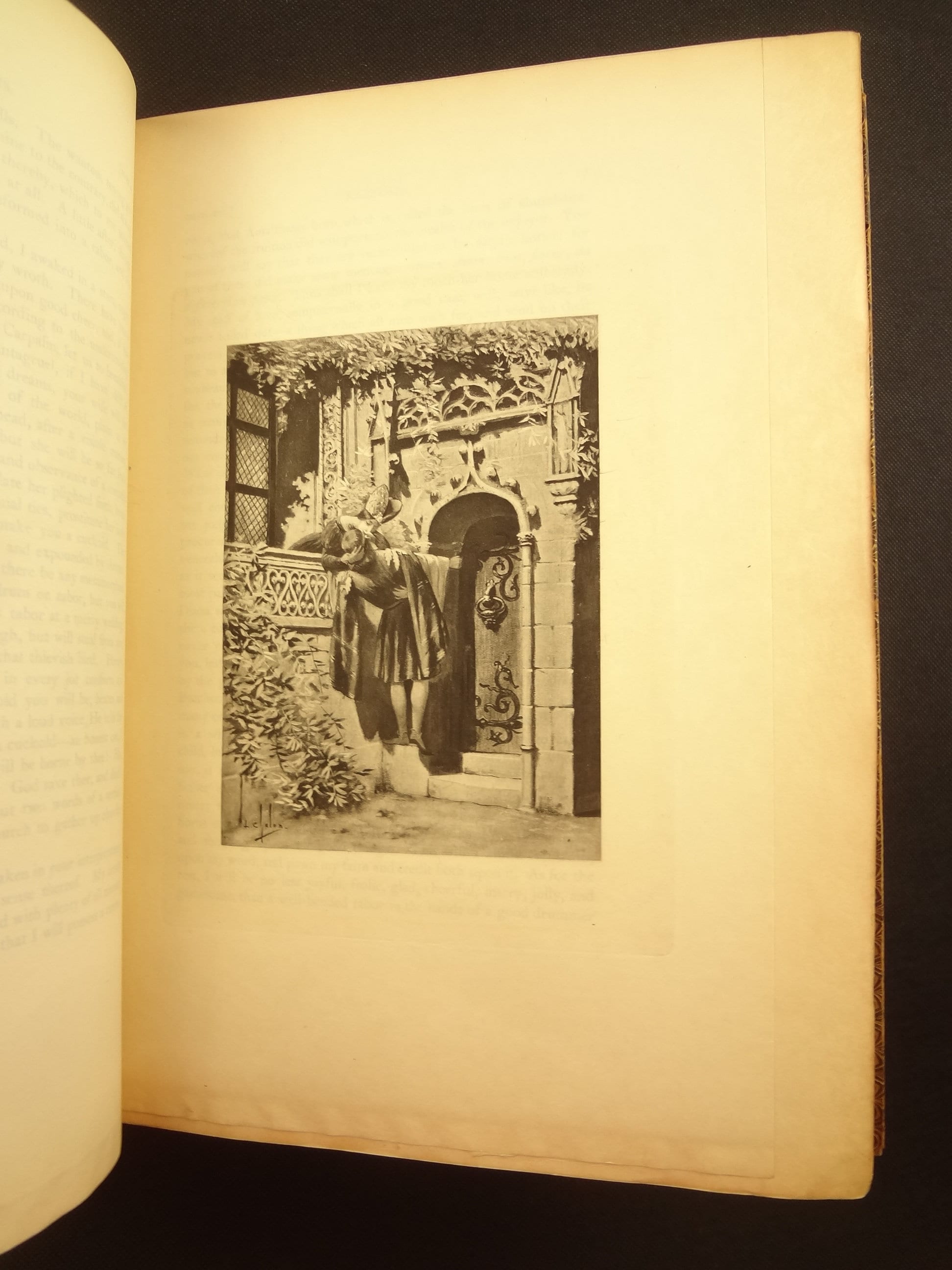 The Works of Master Francis Rabelais, well-illustrated by Chalon, in signed fine-binding, on Japanese Vellum paper, and limited to only 210 copies, with two illustrations specific only to this "Vellum" edition.

François Rabelais (? – 9 April 1553) was a French Renaissance writer, physician, Renaissance humanist, monk and Greek scholar. He has historically been regarded as a writer of fantasy, satire, the grotesque, bawdy jokes and songs. His best known work is Gargantua and Pantagruel. Because of his literary power and historical importance, Western literary critics consider him one of the great writers of world literature and among the creators of modern European writing.

Gargantua and Pantagruel relates the adventures of two giants, Gargantua and his son Pantagruel. The tales, celebrating the spirit of "Pantagruelism", are ribald, bawdy, satirical, mock-extravagant, mock-pedantic, and lustily irreverent yet heartily devout. The Author's Prologue opens with fair warning: "Most noble boozers, and you my very esteemed and poxy friends—for to you and you alone are my writings dedicated ...". While the first two books focus on the lives of the two giants, the three books that follow are mainly devoted to the adventures of Pantagruel and his collection of friends—such as Panurge, a roguish, erudite maverick, and Brother Jean, a bold, voracious and boozing ex-monk—on a rambling sea-voyage in quest of the "divine Bottle".

Although most chapters are humorous, wildly fantastic and frequently absurd, a few relatively serious passages have become famous for expressing humanistic ideals of the time. In particular, the chapters on Gargantua's boyhood and Gargantua's paternal letter to Pantagruel present a quite detailed vision of education.

Signed binding by Morrell. From an 1891 The Bookbinder, Volume 4, January 1 -

"A glance round one binder's workshop is so like to a glance round another, that the eye soon takes in any little important difference worth noting, but we were hardly prepared for such an absence of machinery as we found here, although Mr. Morrell had previously informed us that he had demonstrated to the trade the wisdom of hand work, and that no decent book, even for trade work, need be touched by machinery. All the work is done by hand, even half-bound work. The forwarding and ﬁnishing departments are well lighted, being under a long V-shaped glass roof. Every forwarder has his press and plough, and every book is cut in boards, the boards as well being cut by the plough. All the headbands are hand-worked, the colours of the silks being arranged to harmonise with the general details of the work. Japanese vellum papers are in much request for ﬂys, and on leather-jointed books, where silks are used for ends, there is usually a second —marble paper—underneath, as in French work. A great deal of the work is sewn on bands, ﬂexible, not sawn in. All the marbling and gilding is done indoors, a separate shop having been ﬁtted up on the premises for this purpose."

See pictures. Although still handsome, the bindings have been loved and needed restorative work.
For two of the boards, strong Japan paper straps were extended from the spine and into the boards (between the lowest pasteboard layers), then an upper joint of Japanese paper was applied and color matched between the boards and spine. For the other two boards, some small strips of Japanese paper were applied at the joint (and also color-matched) to help strengthen them. The joints/hinges are working well now. The board edges are worn. The spine edges and raised cords have some chipping. Books should be cradled when opening (V-shape).

The endpaper hinges were not repaired to retain originality. The turn-ins have ghosted onto the nearest pages. Some toning near page edges. Occasional thumbing (thumb wear at right bottom margin). The endpapers have occasional binder notes.

Despite wear of time and use, still very handsome and attractive books. A pleasure to have on the shelf.

I used British Museum polish; it is supposed to be the most nourishing and protecting for the leather, but if you do apply your nose to the boards there is a smell of polish.