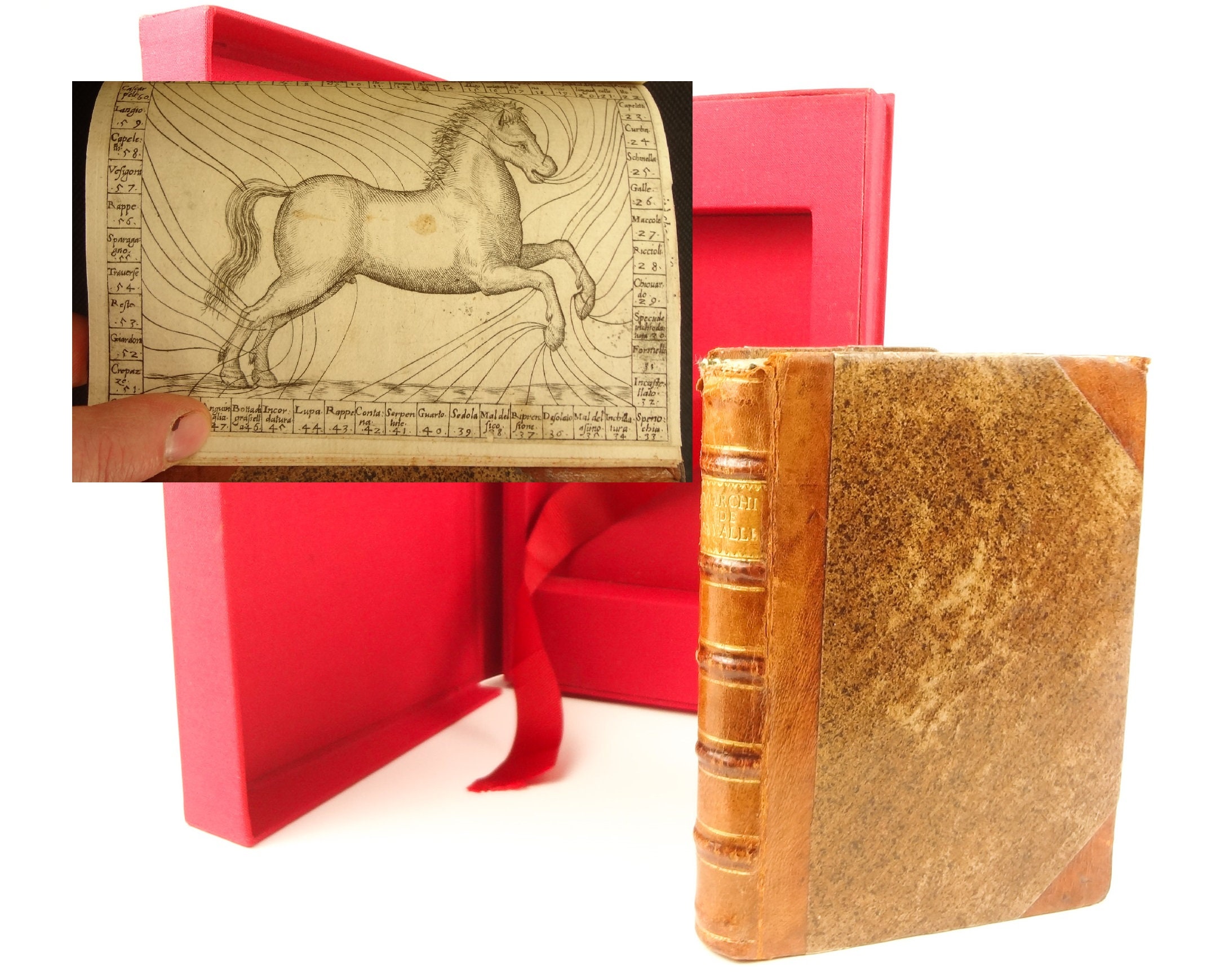 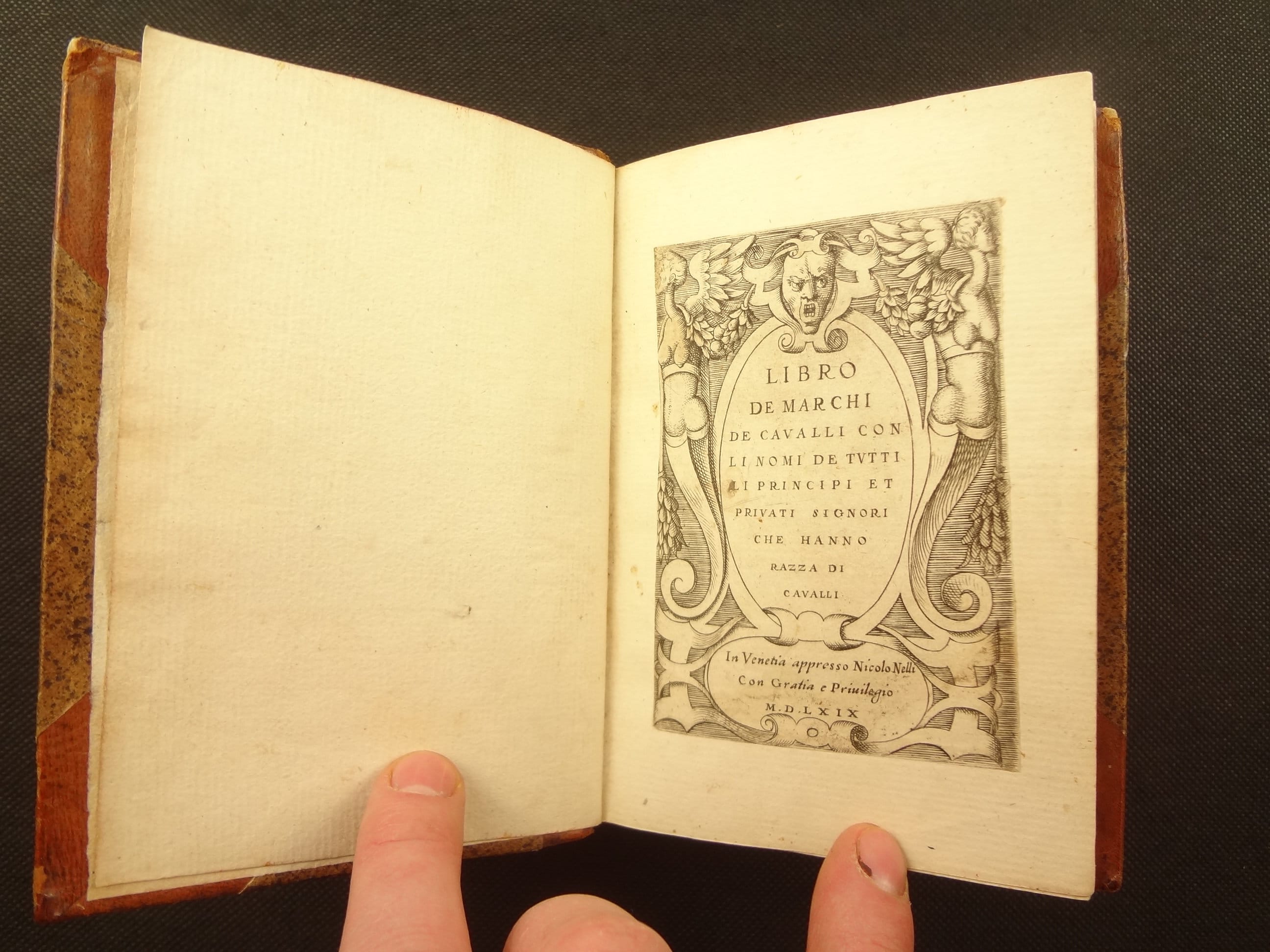 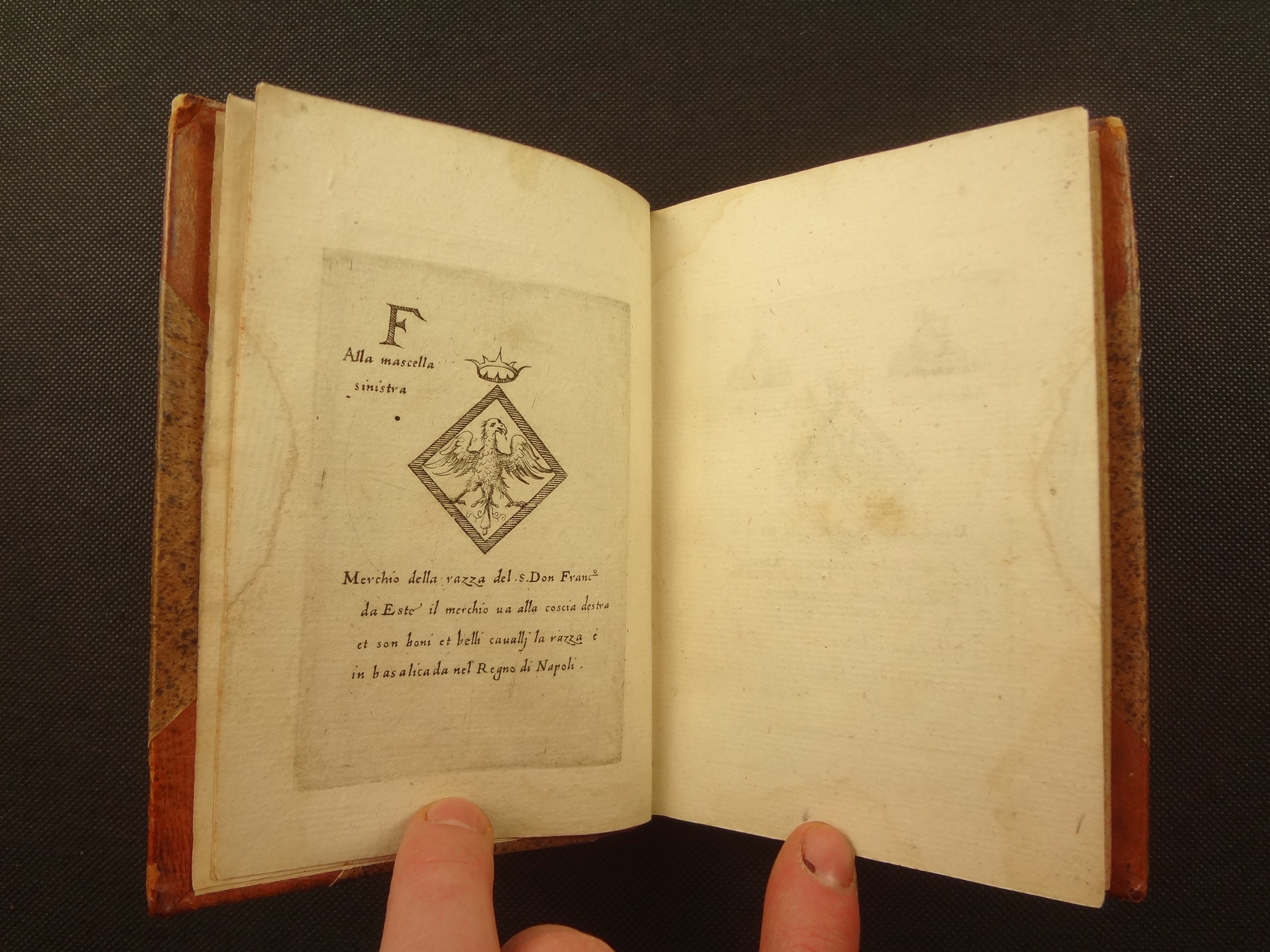 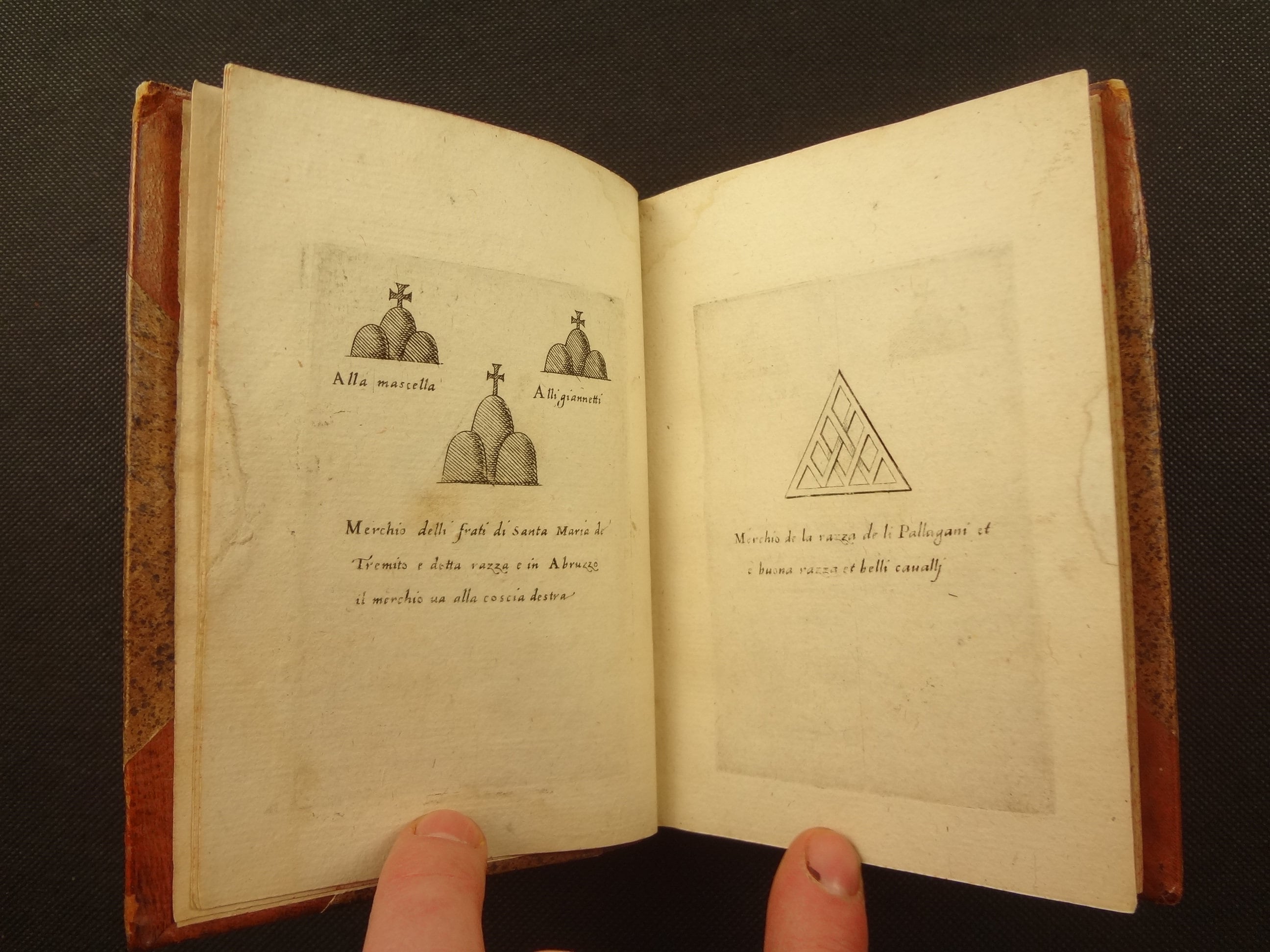 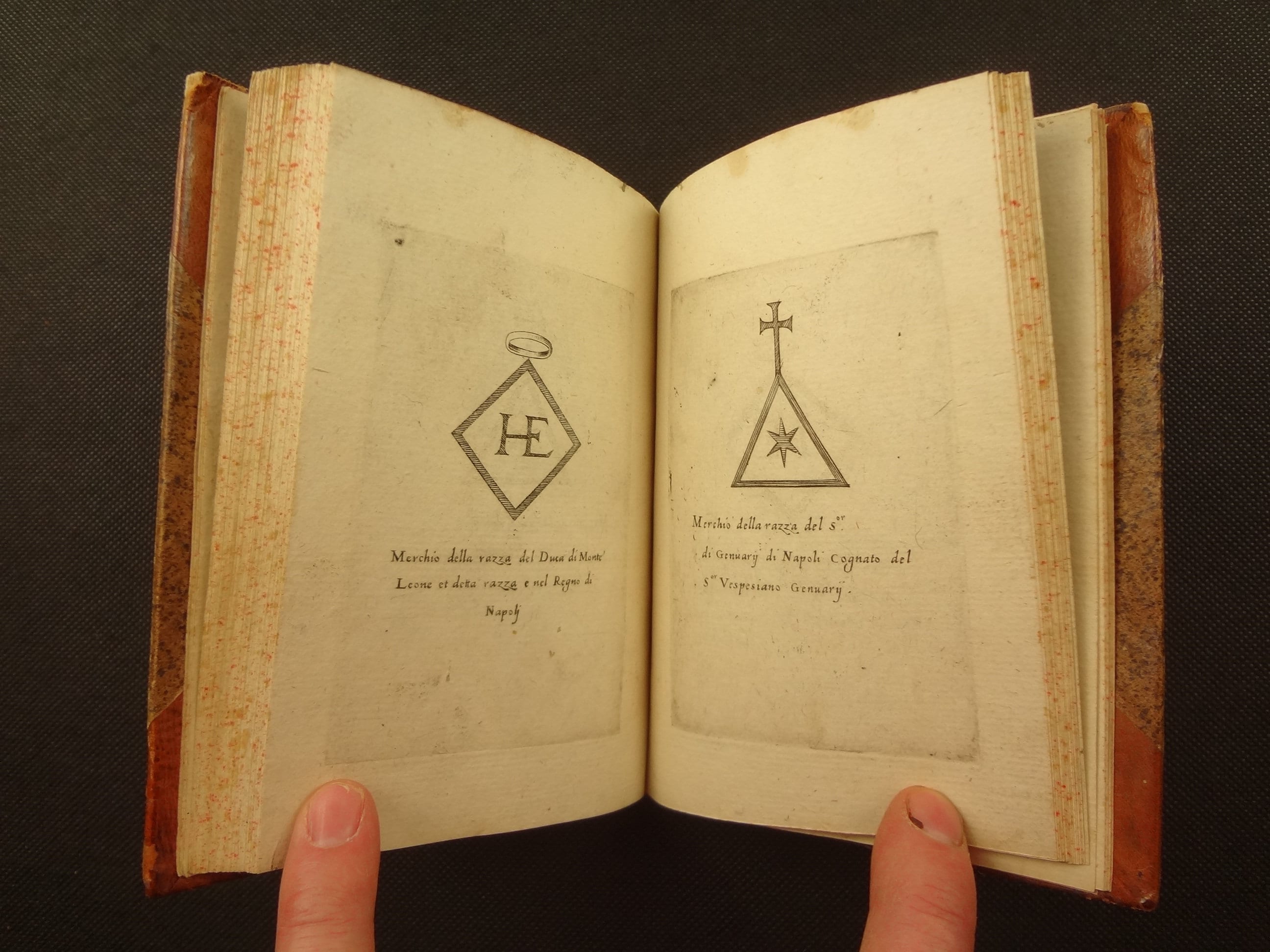 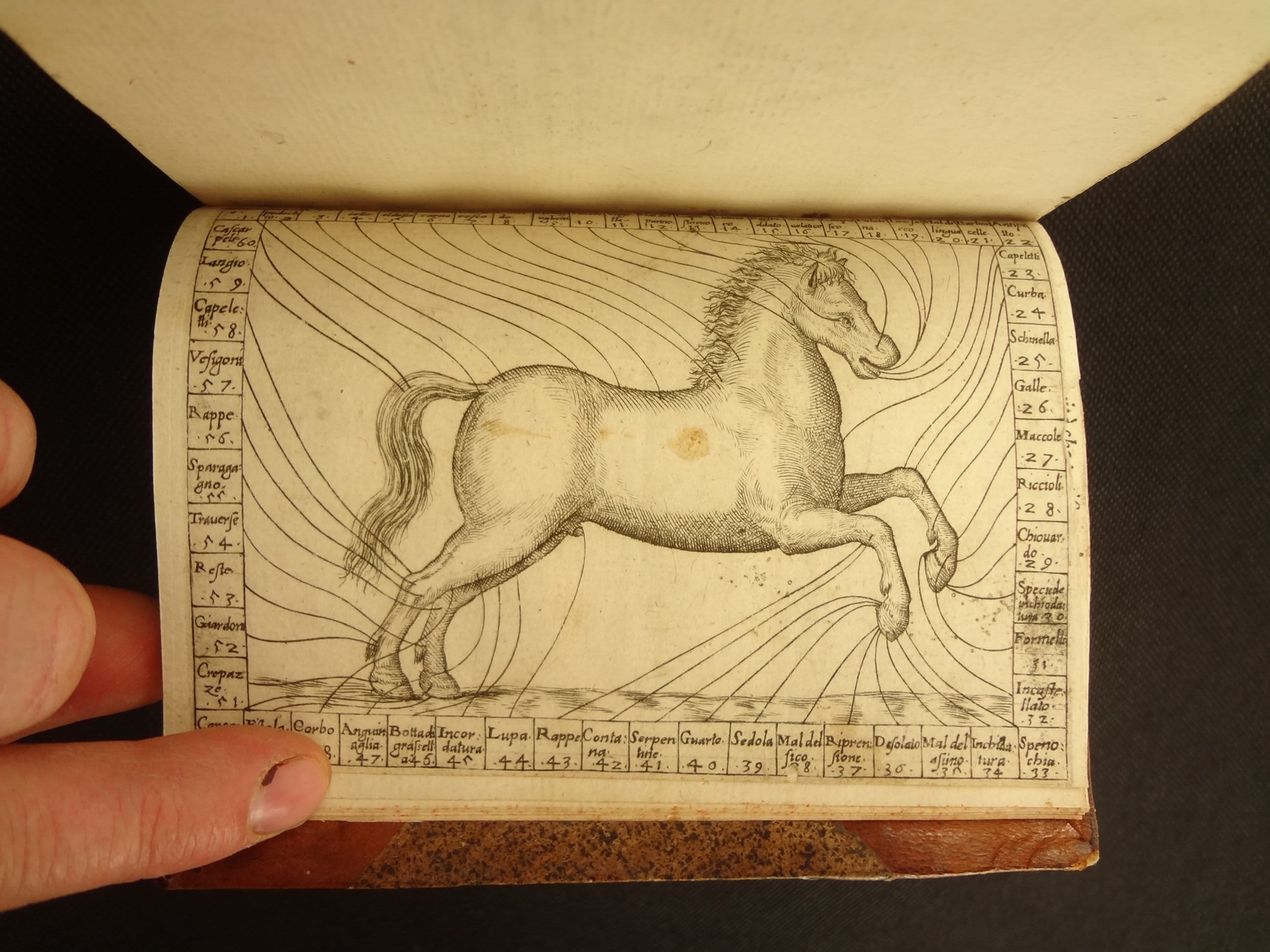 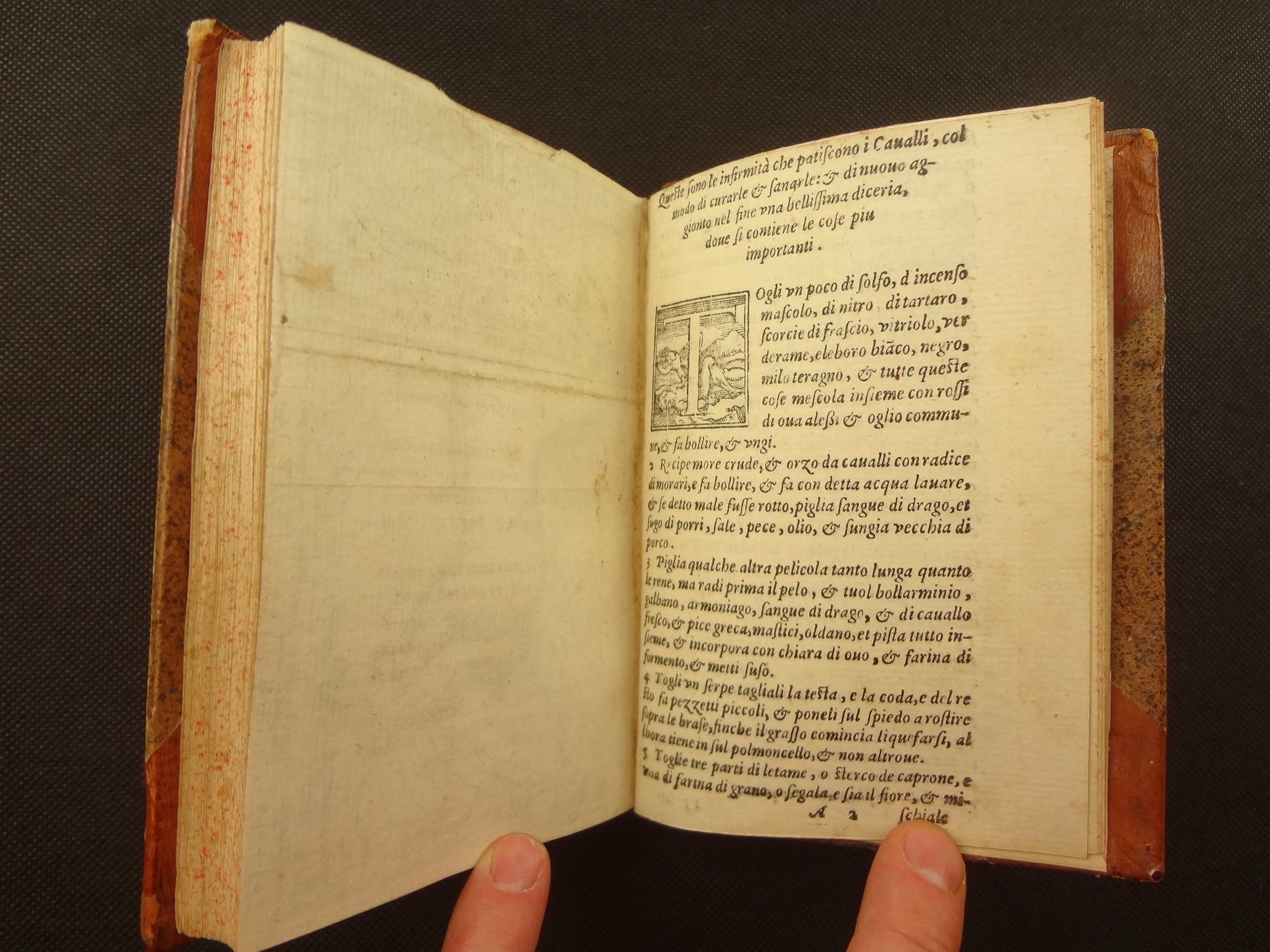 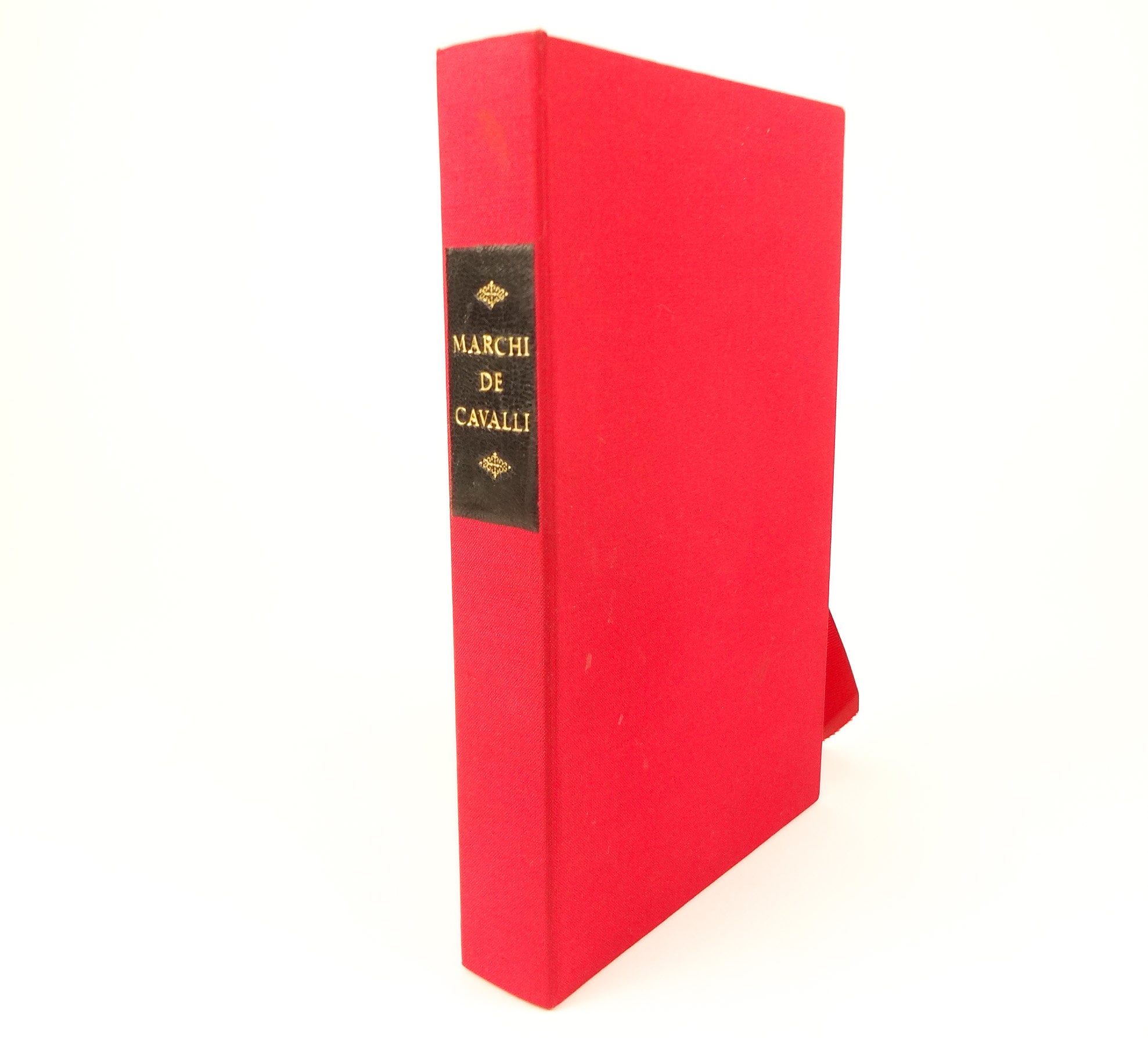 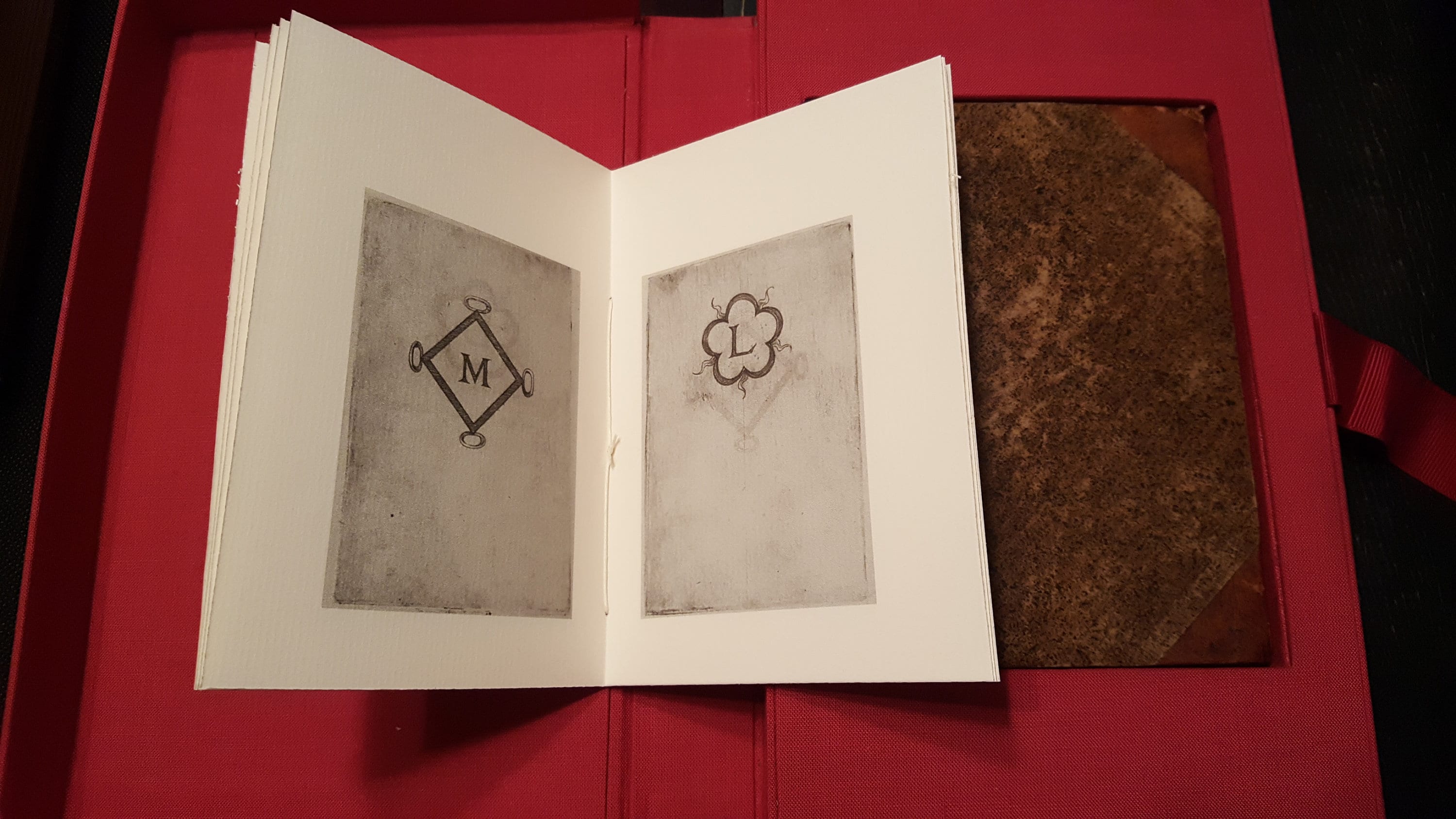 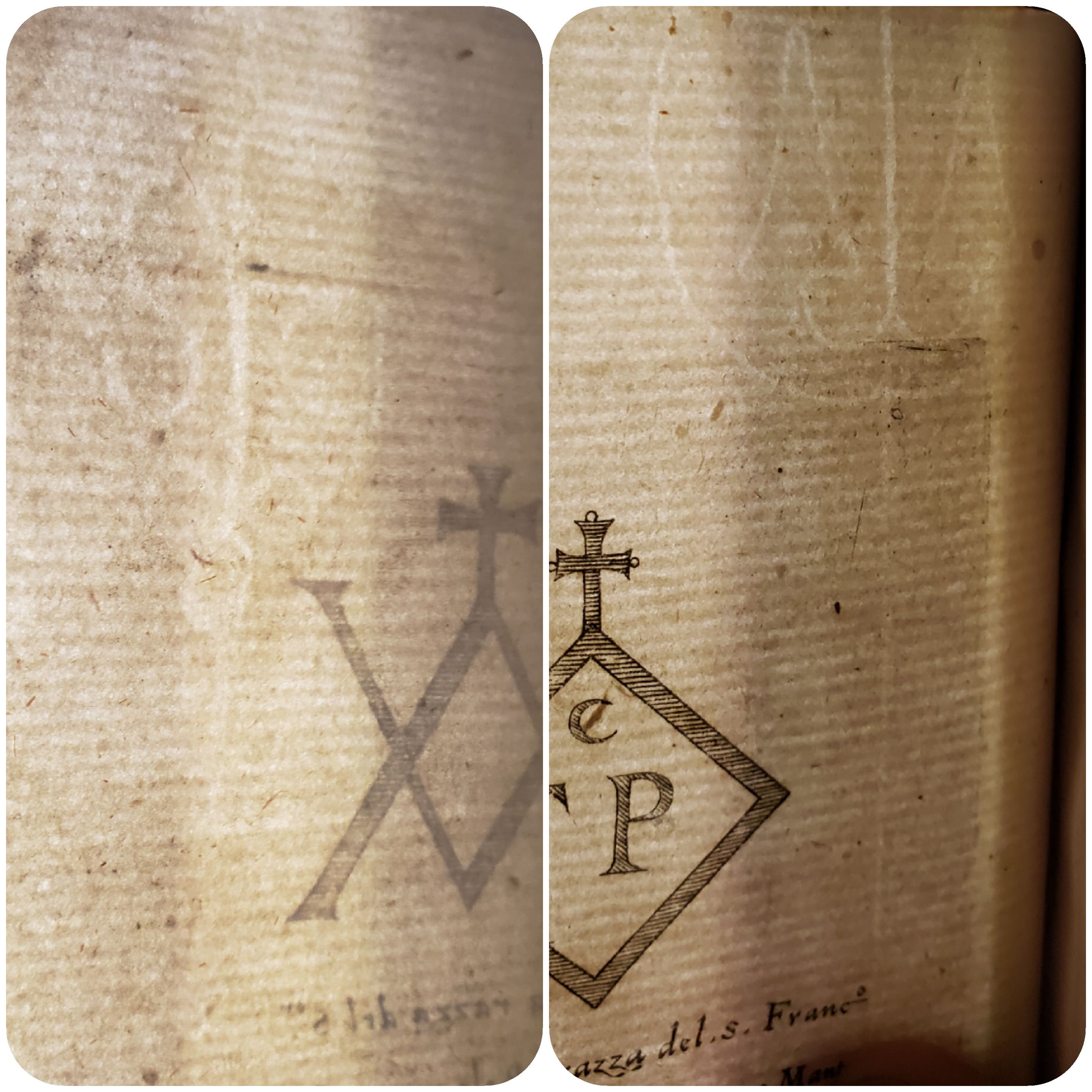 The first known catalogue of agricultural brands. The brands cataloged here were applied to horses of the rich and royal, mainly in Italy. This work includes a well-known 16th century engraving showing the names of various ailments of parts of the horse body.

This copy has 72 brands. At first I thought my copy was incomplete, but when I came across the Austrian copy scanned online (can be seen in Google Books) I realized that my text was a different variant (different type, different initial capital, etc.); the text in my copy does not match the 2nd edition of 1588's type. Although it's likely my copy is missing a few brands, it is a different variant. There are two variants in the bibliographies, one with 76 plates and one with 87 plates. The Austrian Library copy would be of the larger variant, due to the number of plates. I have not been able to review a copy of 76 plates to see if the type matches.

I produced a facsimile gathering of the fourteen plates the Austrian copy has, which mine does not. This gathering was printed on acid free paper, with a similar weave. I sewed the gathering and trimmed it to fit within the box (see pictures). With those fourteen plates added, I believe all the brands of the 1st edition are demonstrated (86 brands, and one horse plate, totaling 87 plates). The added gathering is not for sale, but will be provided (free-of-charge) to the purchaser of my book.

In my copy are several examples of an anchor within a ring, and a countermark over three rings. As recorded in the Gravell watermark database (record "anchor.510.1", among others) these watermarks indicate the paper is from Venice in the mid-16th century.

The Getty Research Institute also hosts an online copy; if you look at the back of the title page you'll see the same three ring watermark and a countermark visible. Regarding the countermark, the Gravell entry notes tells us the initials vary because they are indicative of the panel beater and as many as thirty different beaters have been recorded.

This book seldom reaches the market. Princeton's Rare Books and Special Collections refers to their copy as a "highlight". In an article entitled "Brand Books in the Princeton Collections of Western Americana" (William S. Reese), the author writes:

"The earliest example known is the Libro de marchi de caualli . . . (Venice, 1569), a copy of which is in the Princeton collection. Although the plates are elegant examples of Venetian engraving, the format of the book anticipates later developments in its duodecimo size, intended for pocketsized portability in the field, and its clear presentation of the branded patterns. Entirely devoted to horses, it always illustrates a primary brand, and often a secondary one to be found on the opposite flank or some other part of the horse. Most of the brands seem to be modified versions of family symbols, or in some cases simplified versions of coats of arms. A few of the letters or patterns anticipate ones later popular in the West, such as the letter “W” in lazy loops, what would later be called a “running W.” The eighty-six plates record brands from all of Italy, primarily those of great magnates and princes. Its use may have been more for identifying post or war horses than commercial purposes, but in this little volume the idea of the brand book achieved its basic form."

More on the Brands -

I haven't studied all the plates, but I did focus on the 25th plate because it was in my copy, but not the Austrian National Library copy. The 25th plate shows a diamond surrounding "CR"; the information given lists the brand as "Carlo Rouina Gentiluomo Bolognese". Upon study, I found that this was the brand of Carlo Ruini, who produced the well-regarded 1598 work Anatomia del Cavallo (published posthumously), with many anatomical horse images influenced by De Fabrica Corporis Humani.

I'm sure many of the other plates would provide for interesting study.