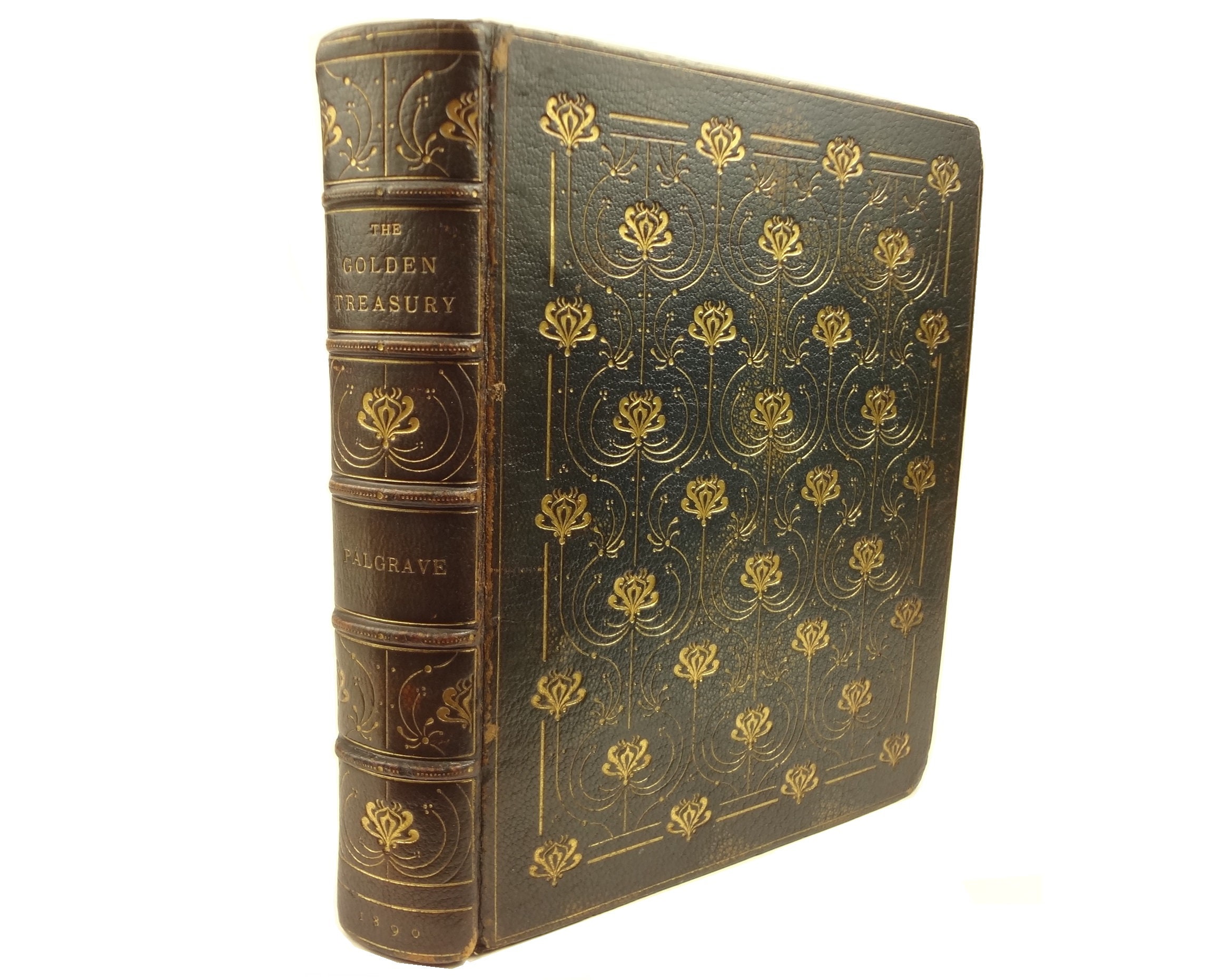 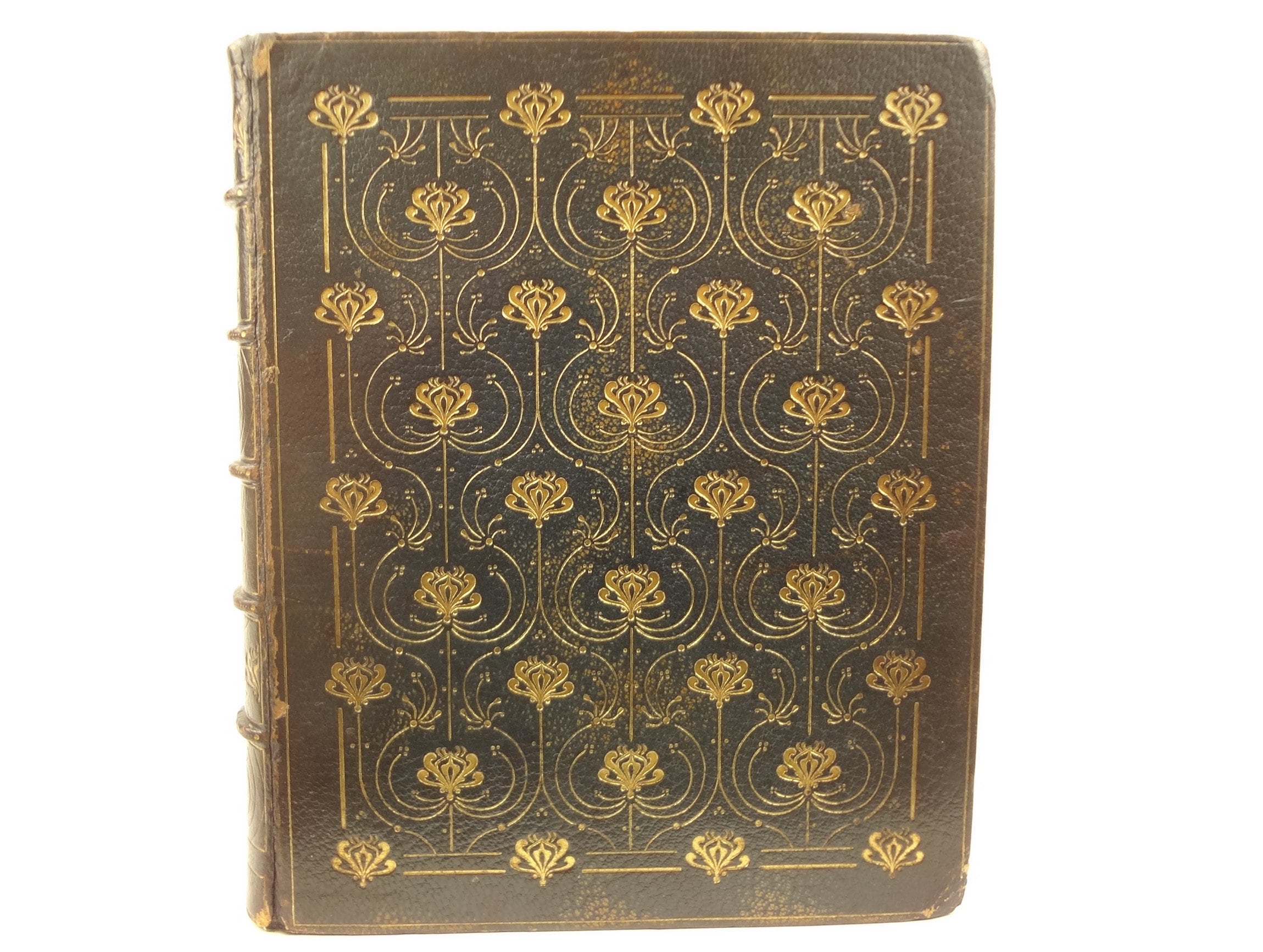 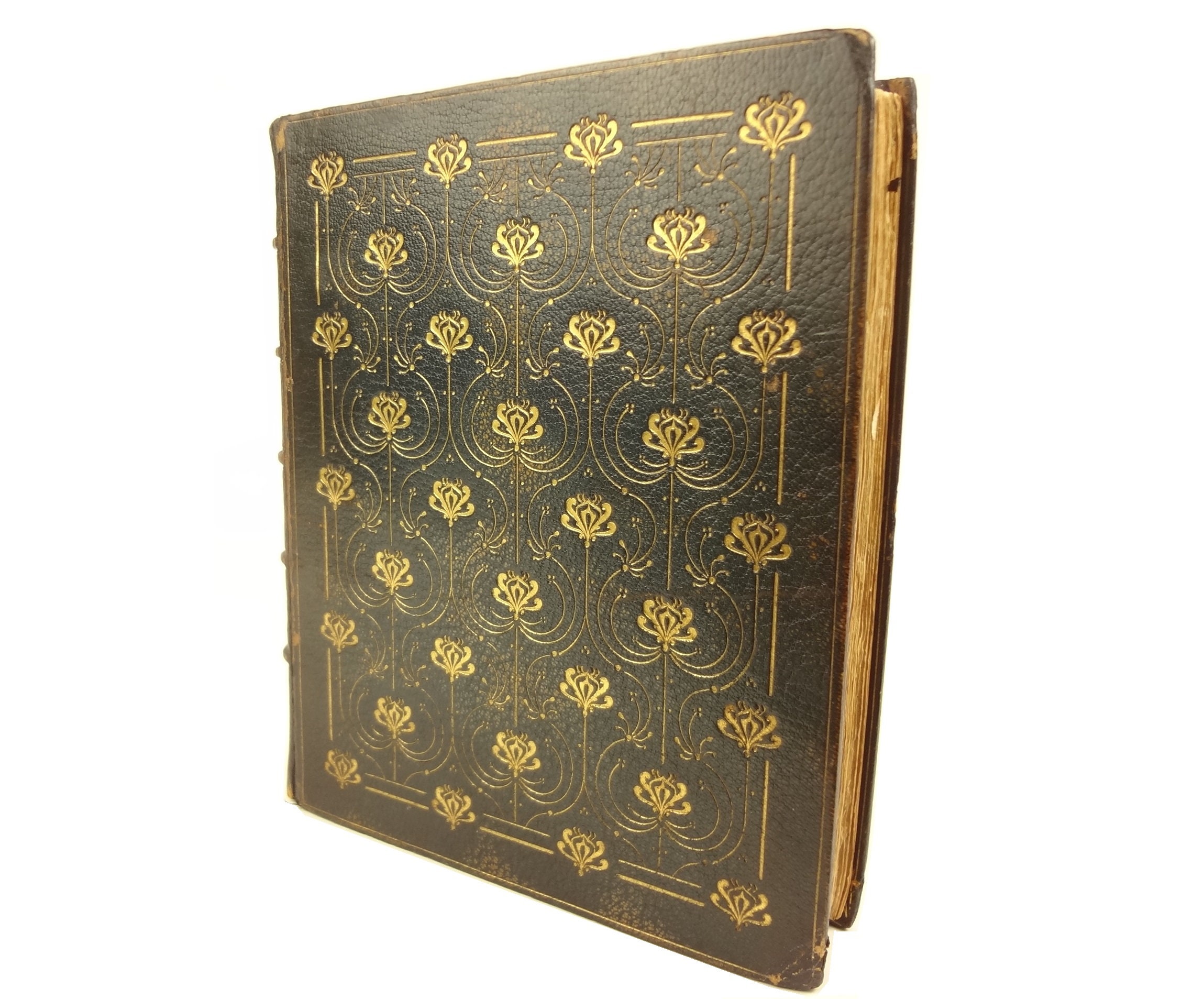 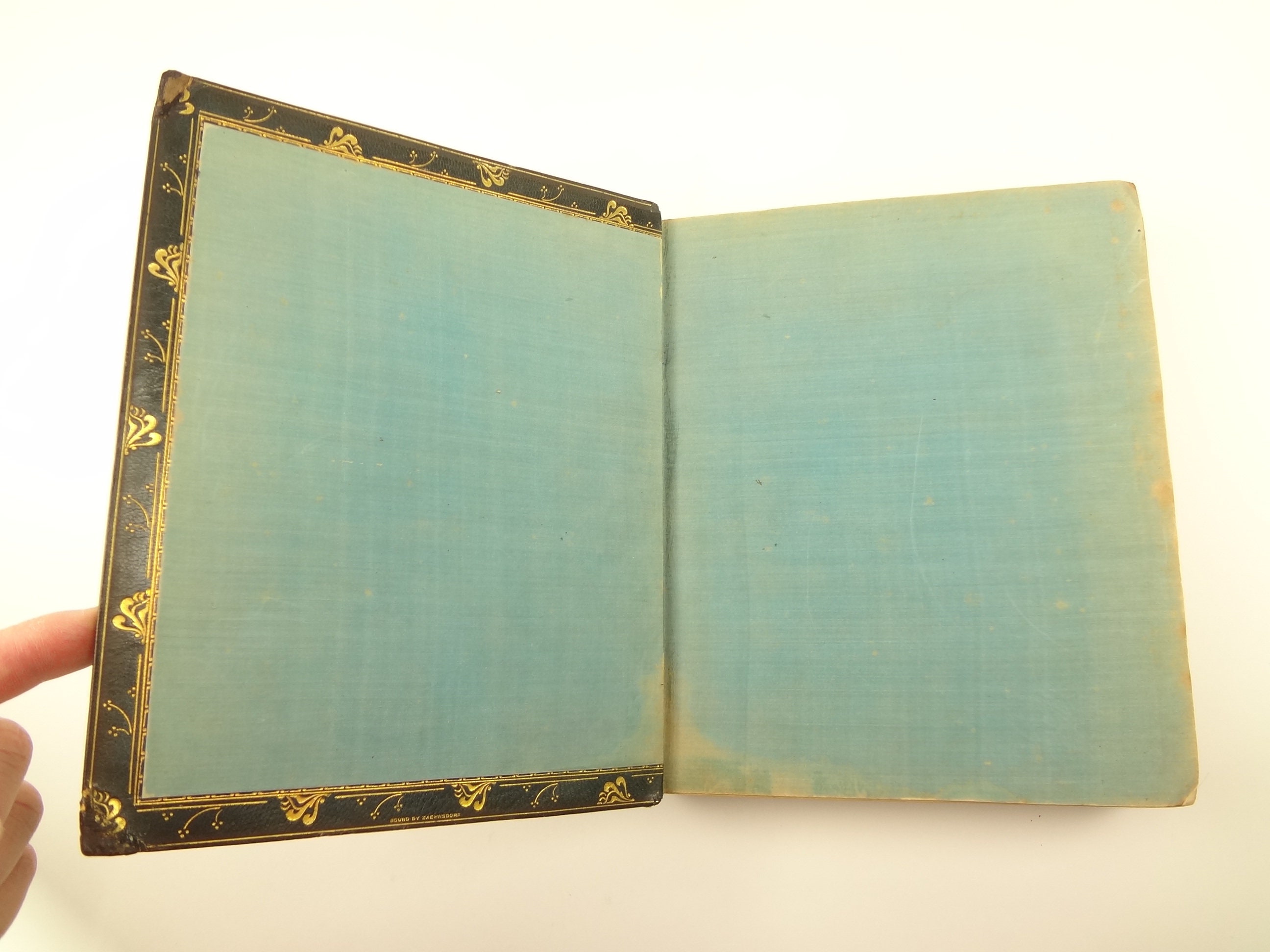 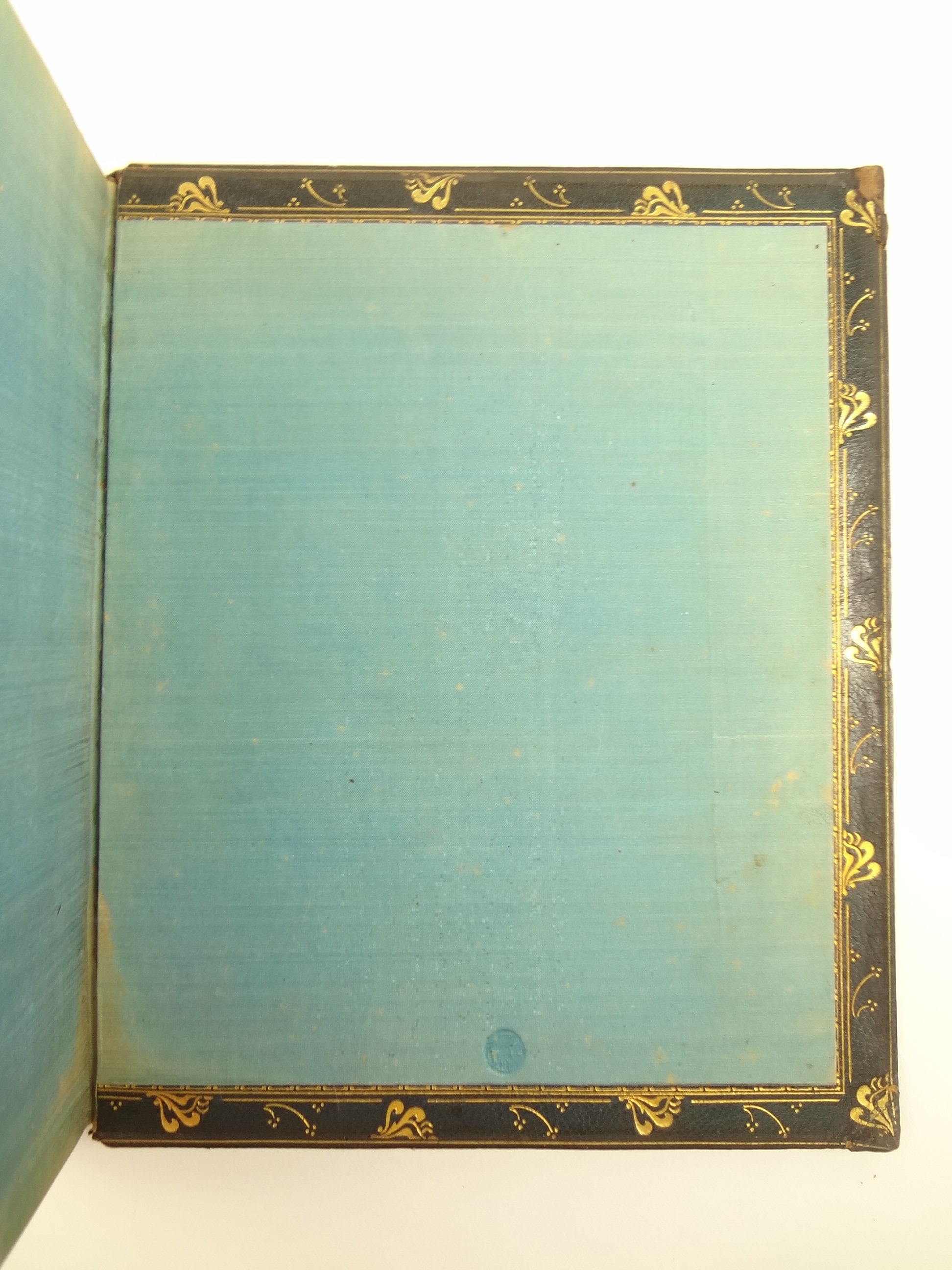 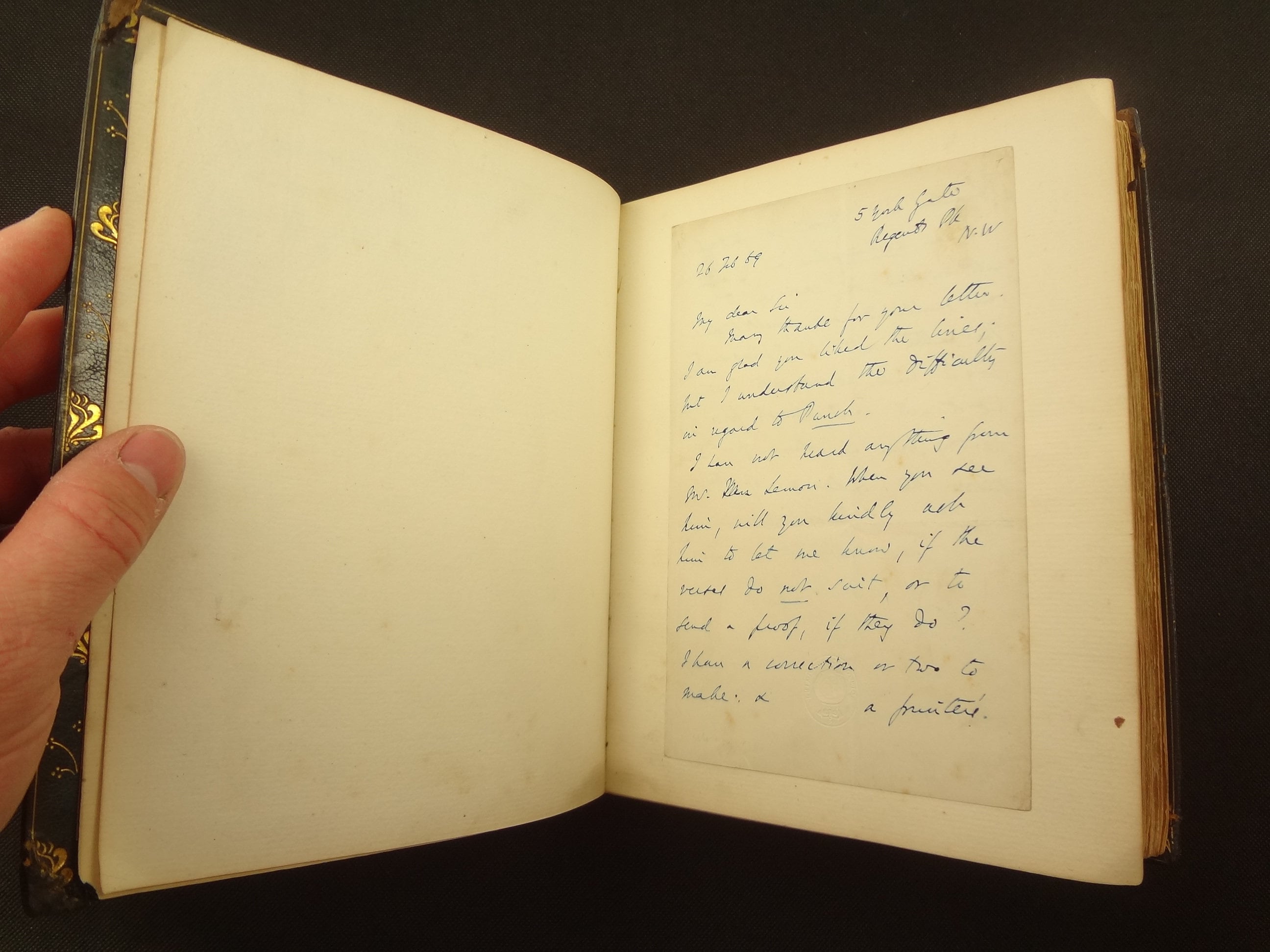 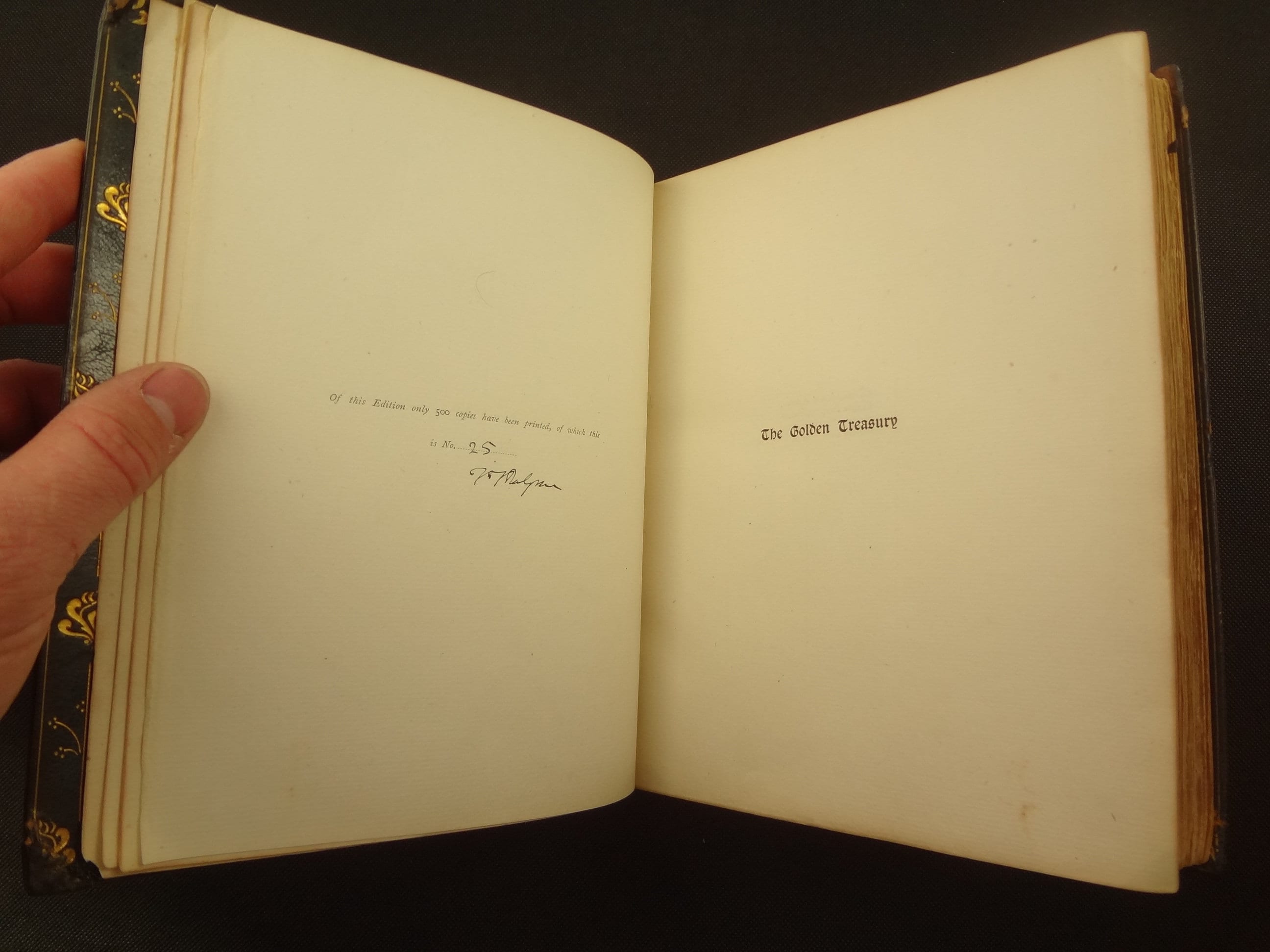 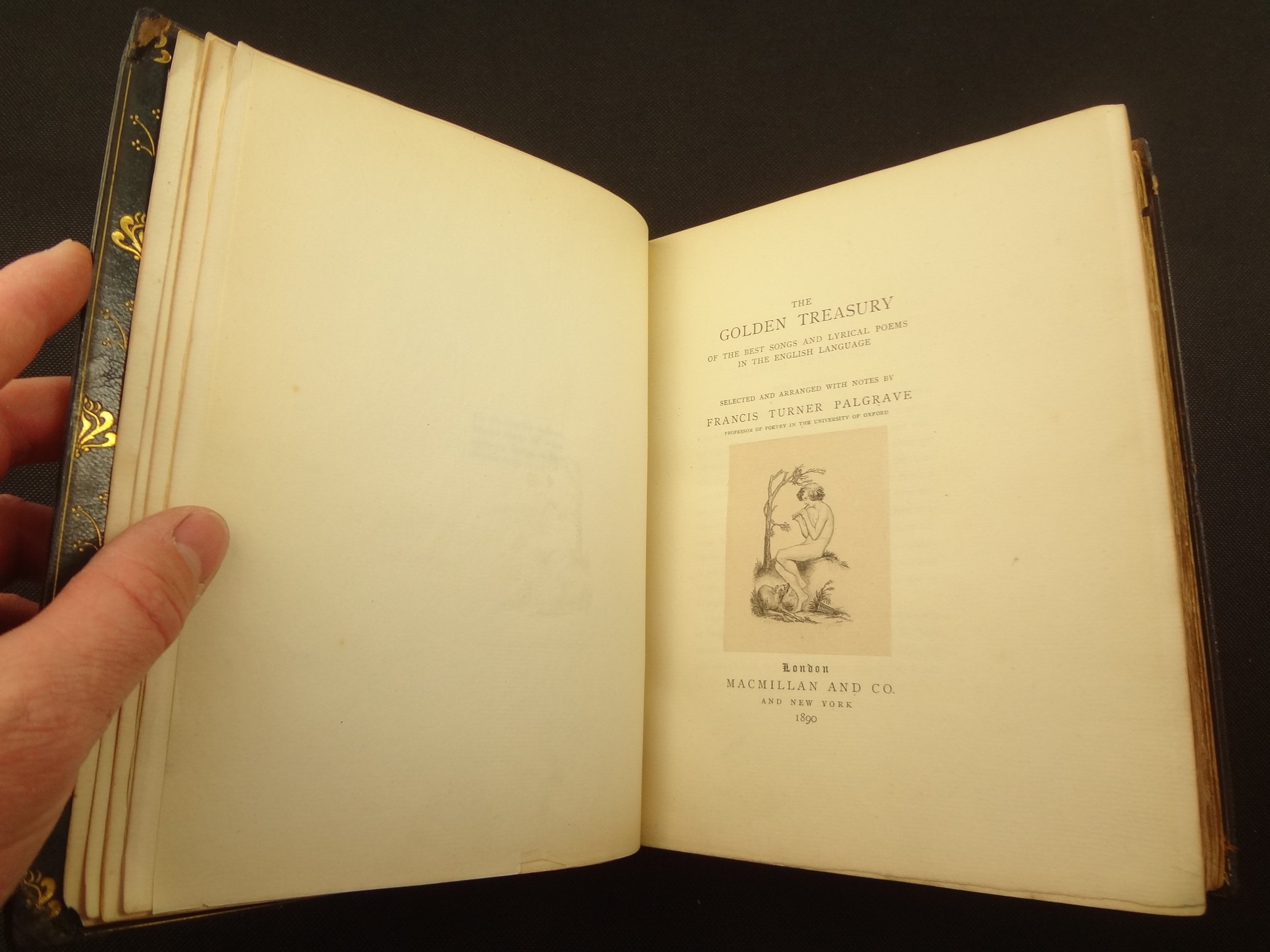 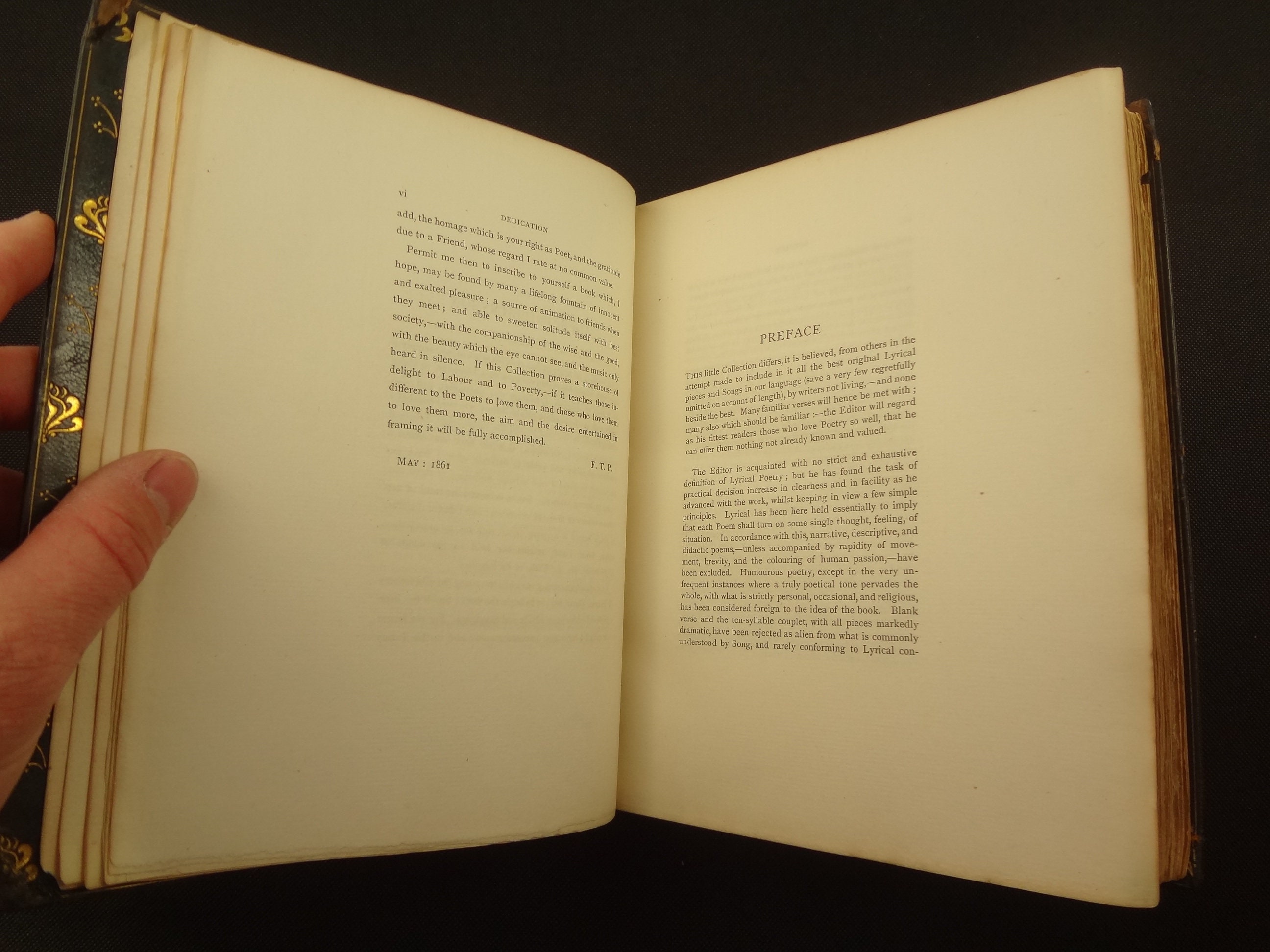 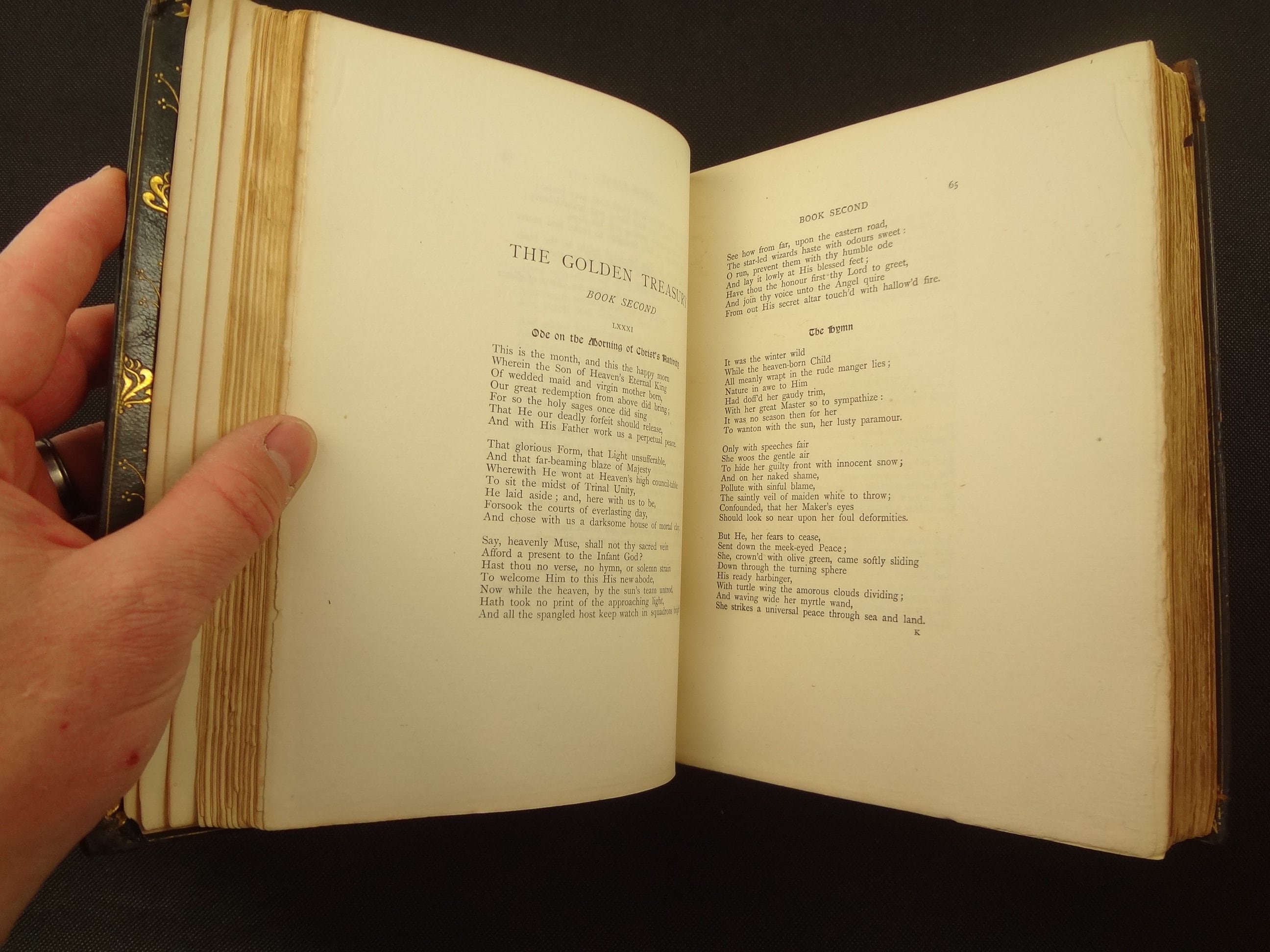 The small imprint on the rear doublure (silk, in lieu of paper, covering rear board) was Zaehnsdorf's method of delineating their bindings that were displayed at an exhibition.

A fascinating manuscript letter dated 26 Feb '69, signed, is tipped-in indicating that Palgrave submitted to Punch but may have been unsuccessful (I find no reference to Palgrave in regards to Punch, but it may have been published anonymously). A small pencil note on the letter reads that the letter was given to Shirley Brooks, who in 1870 became editor of Punch (at the death of Mr. Lemon).

"My Dear Sir, Many thanks for your letter. I am glad you like the lines, but I understood the difficulty in regard to Punch. I have not heard anything from Mr. Lemon. When you see him, will you kindly ask him to let me know, if the verses do not suit, or to send a proof, if they do? I have a correction or two to make, & a printer'sblunder in a poem is fatal. I fear Archangel & (?) will indeed by caviare to a very multitudinous multitude! The latter with his 'innocent joy' made me cry with laughing but it will want a vast force of poetry pure in volume four to restore the balance of the ideal."

"When Palgrave published The Golden Treasury , the most significant anthology of the nineteenth century, he had many reasons to dedicate it to Tennyson. Beyond mere admiration, his acknowledgement proclaimed the considerable aesthetic debt owed to the Poet Laureate. From the anthology’s inception in 1860 to the final selection of poems published the following year, Tennyson had offered encouragement and poetic judgement. As Palgrave himself commented in 1861, referring to Tennyson’s involvement with the selection, the entire book ‘fairly represents his taste’. More even than William Allingham’s lyric anthology, Nightingale Valley , which Palgrave mischievously plundered, the selection became an initiation into verse for many future generations of poets. In the thirty-five years before Palgrave’s death, over 140,000 copies of The Golden Treasury circulated through Victorian society; by the Second World War the number had reached more than half a million." - (Michael J Sullivan, Essays in Criticism, Volume 66, Issue 4, 1 October 2016, p. 431)

See pictures. Beautiful, but with a little wear. Corners of boards bumped. Edge wear to binding at fore-edges and corners. On close inspection there is a line at the joints, indicating it may have been respined, but it was expertly done, almost imperceptible.

Despite the notes on condition, it is a beautiful book, very pleasing to see and will add wonderfully to any library.