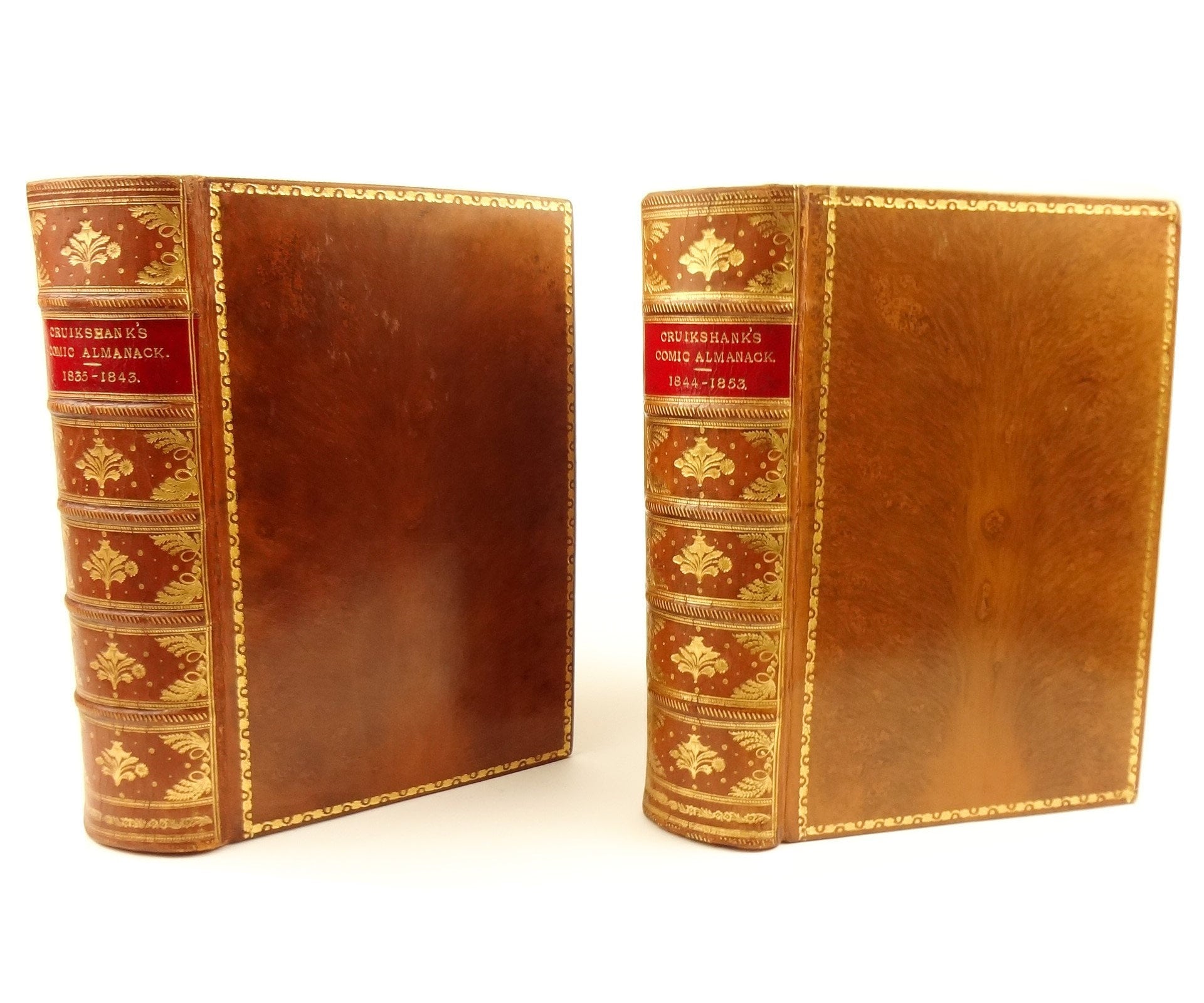 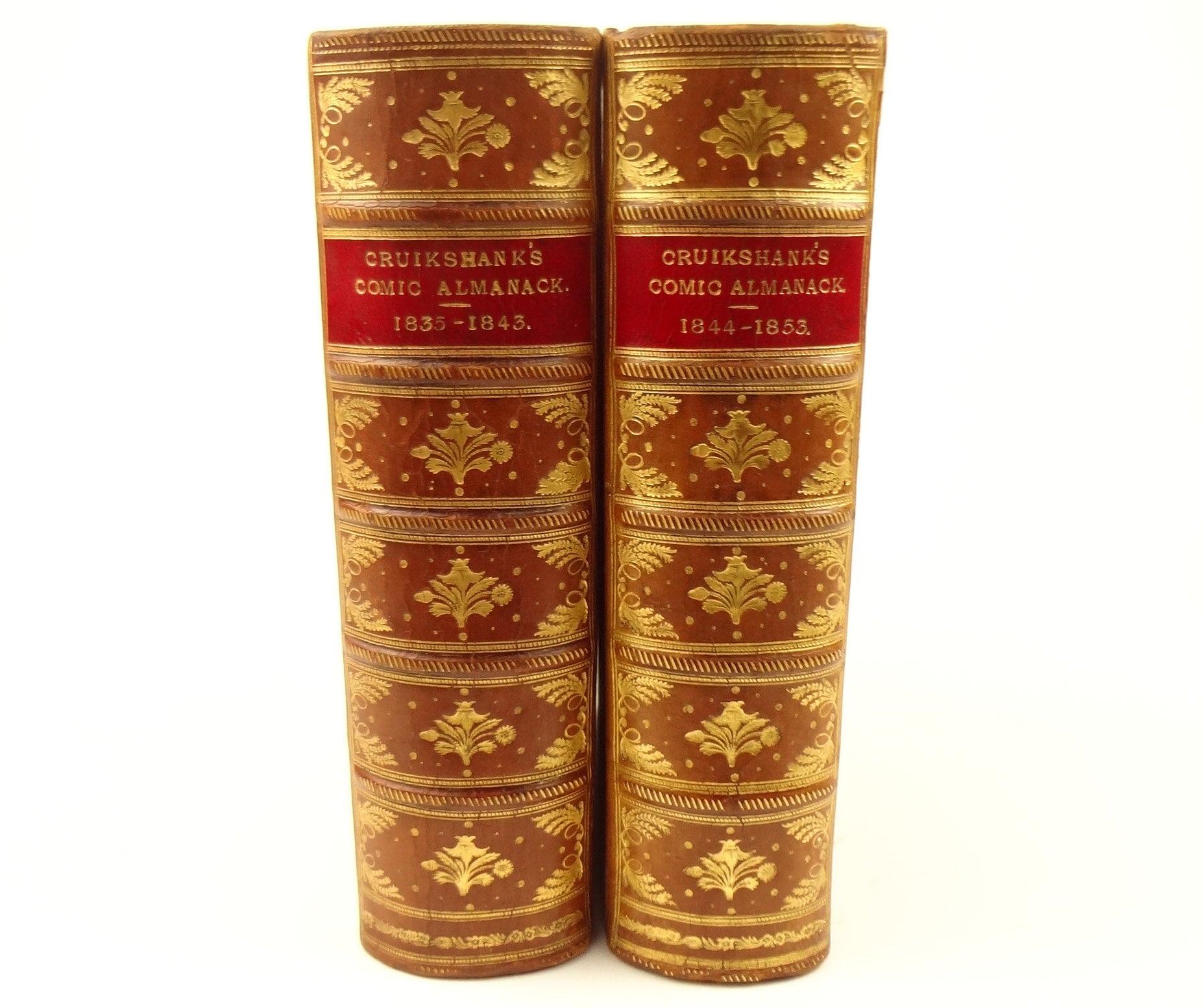 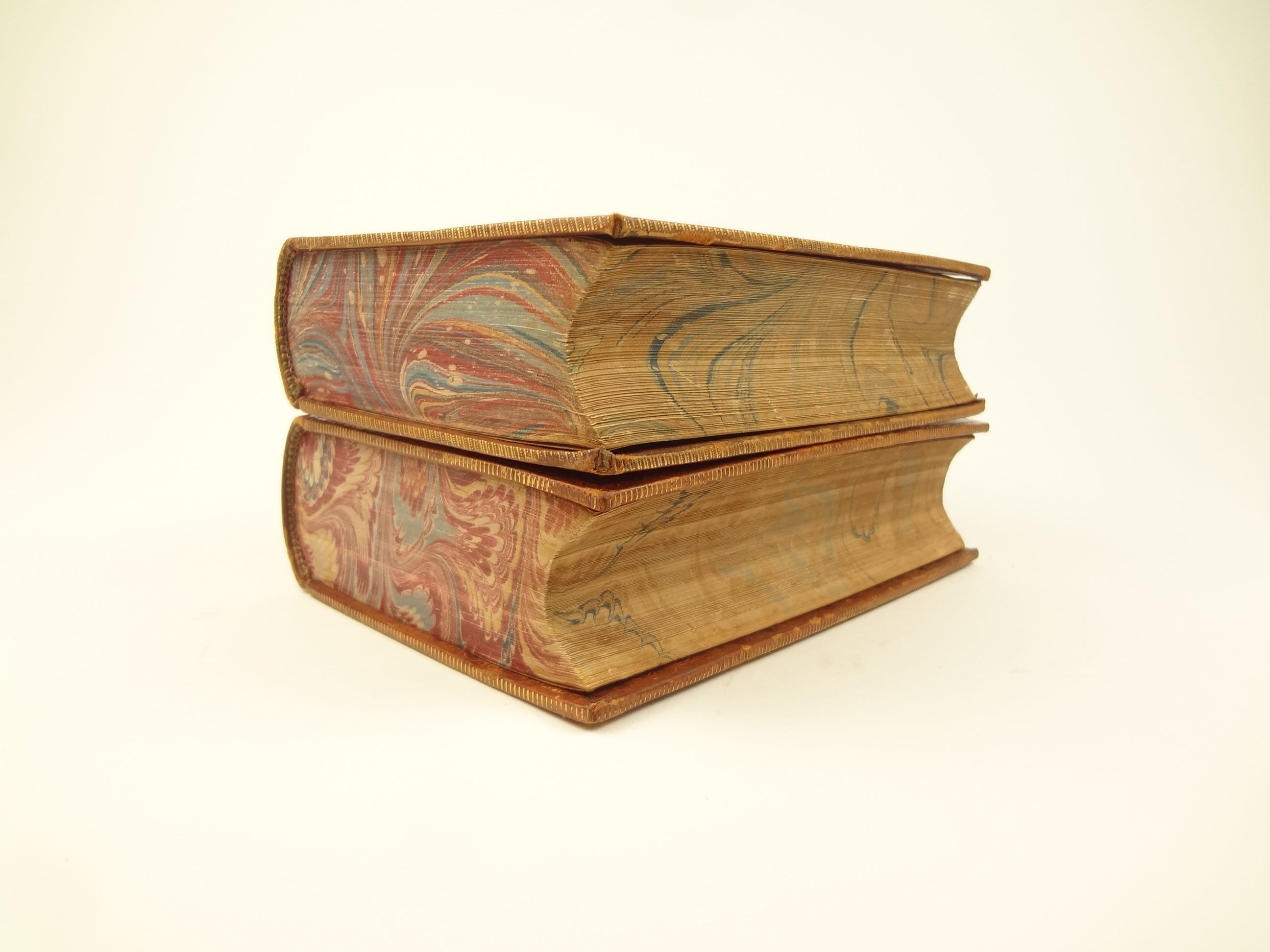 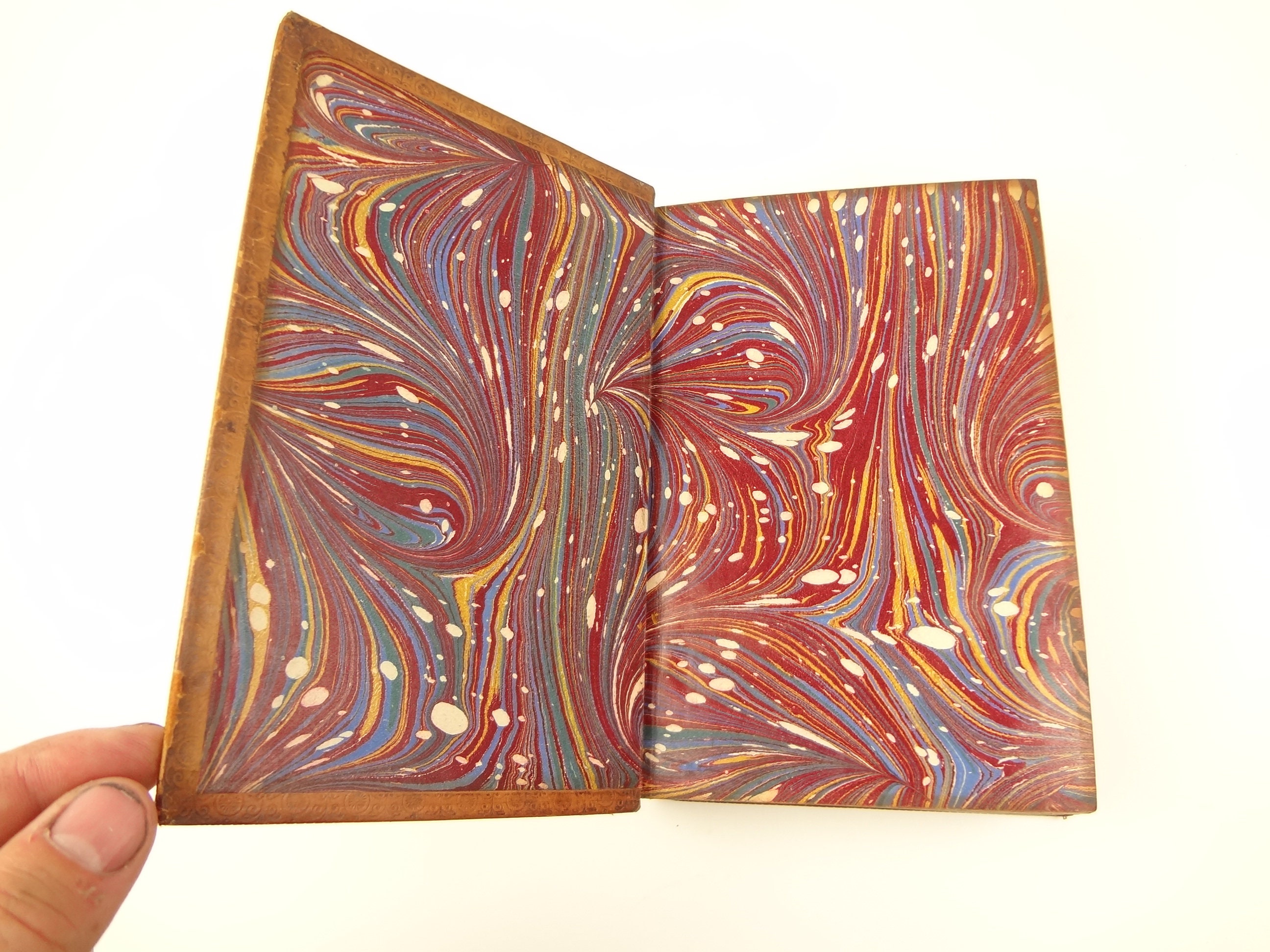 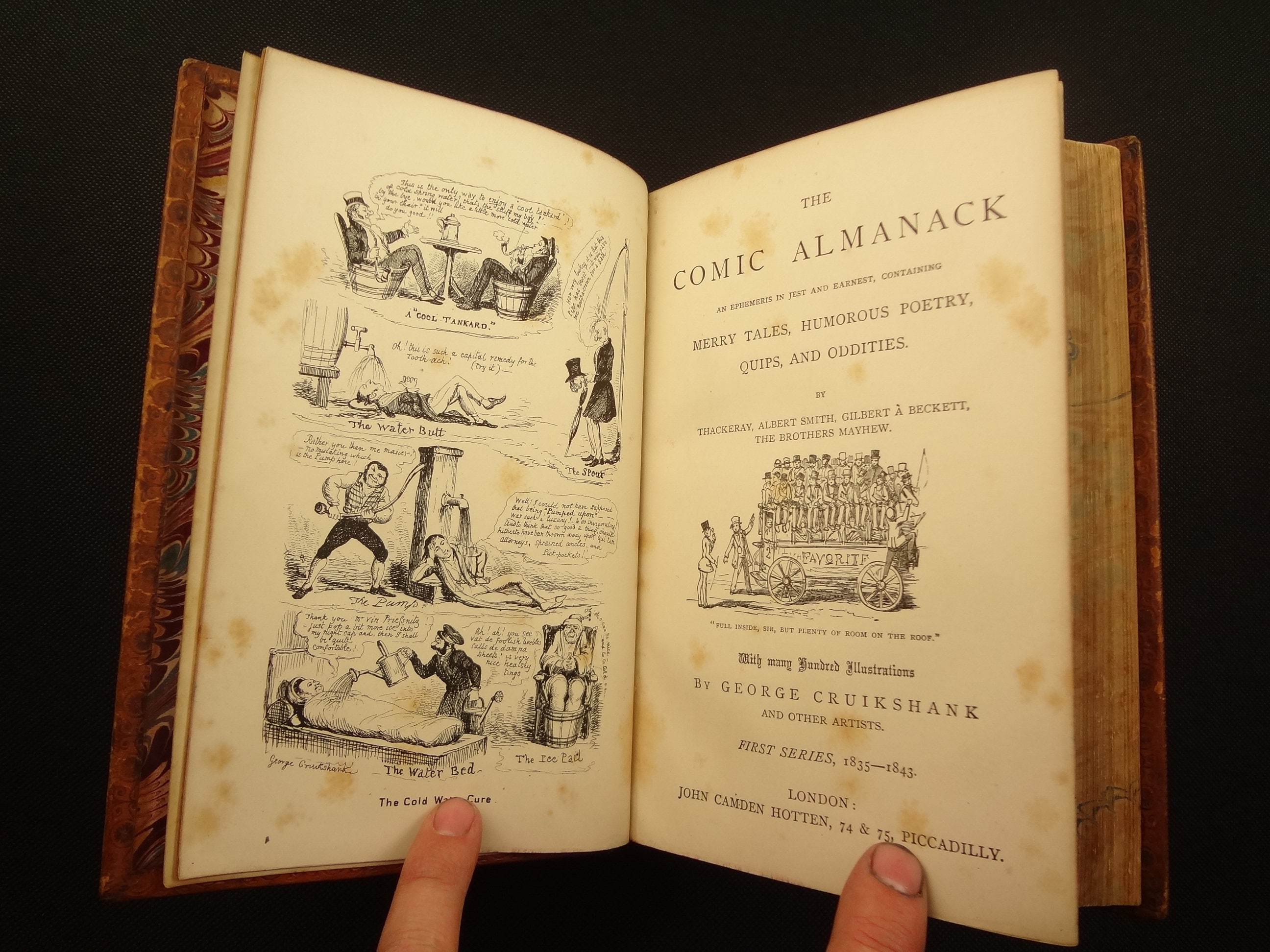 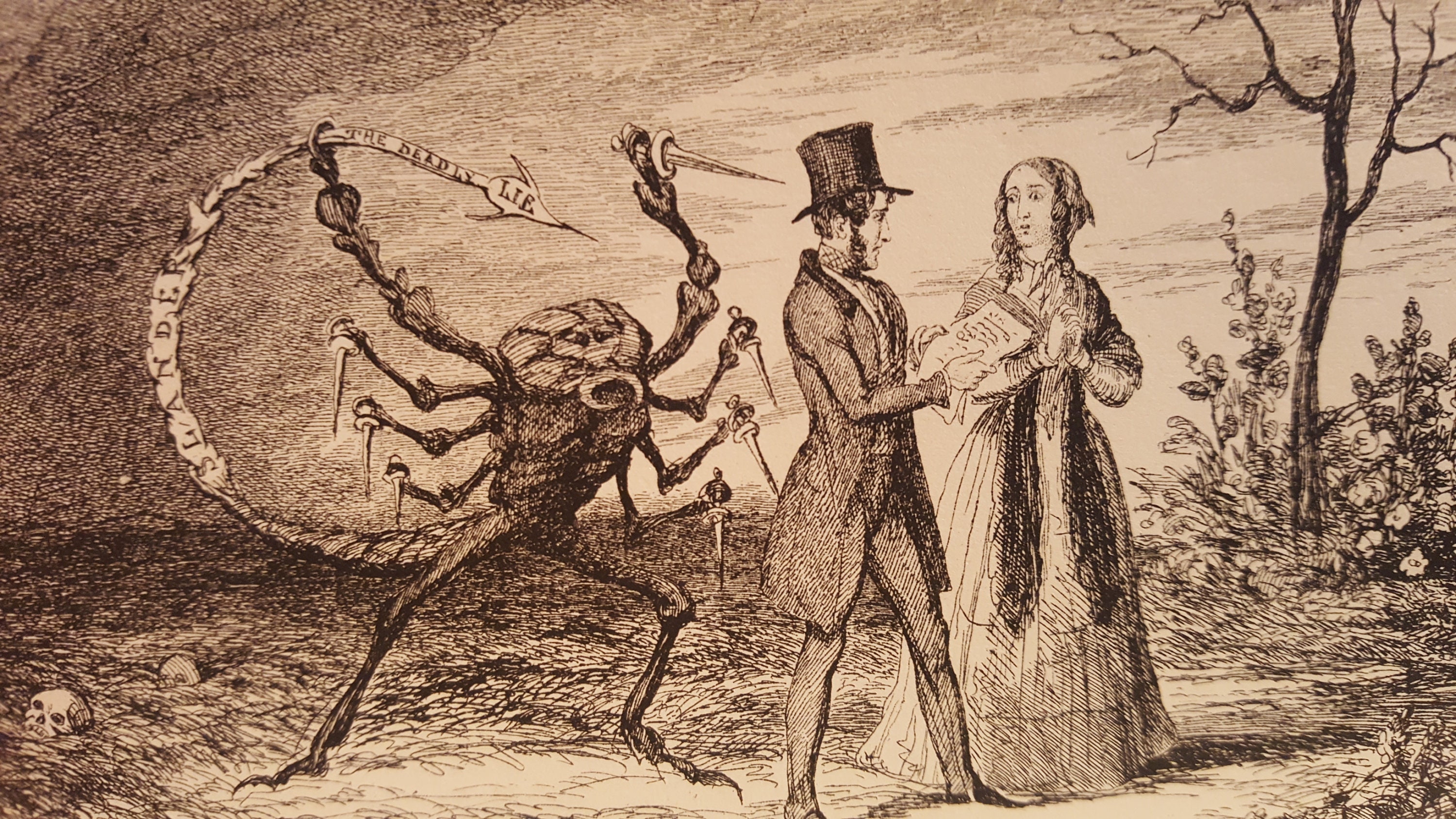 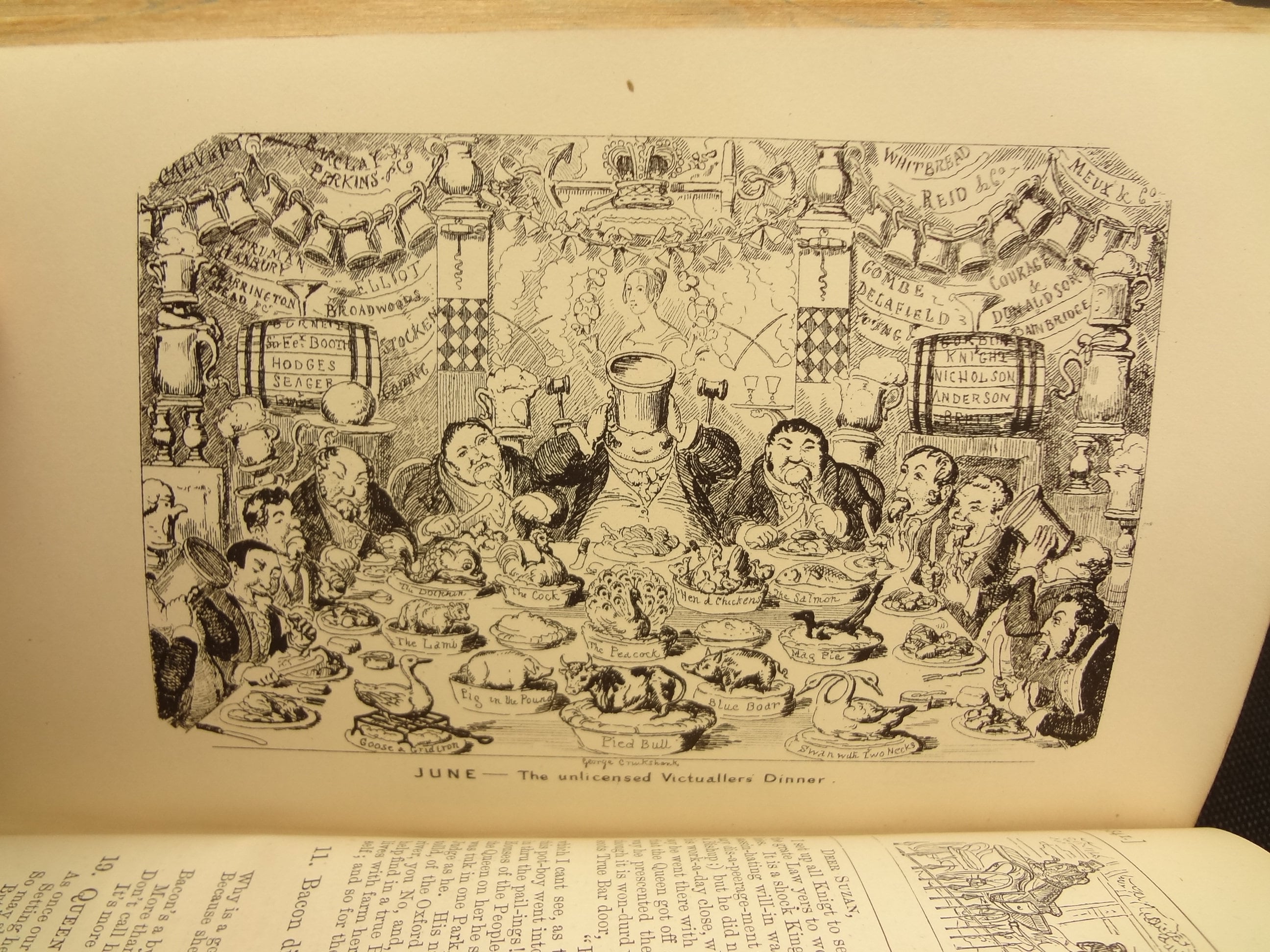 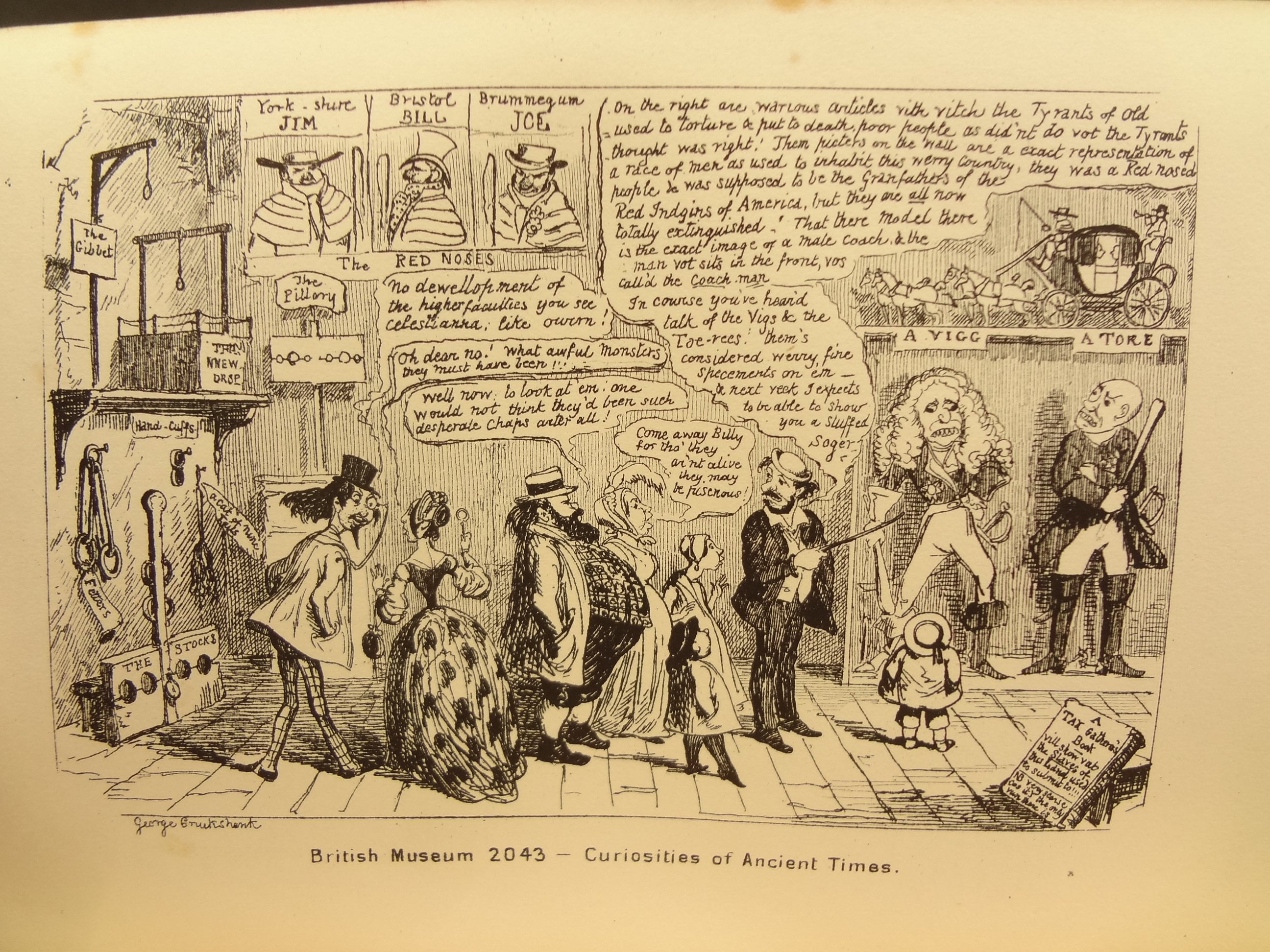 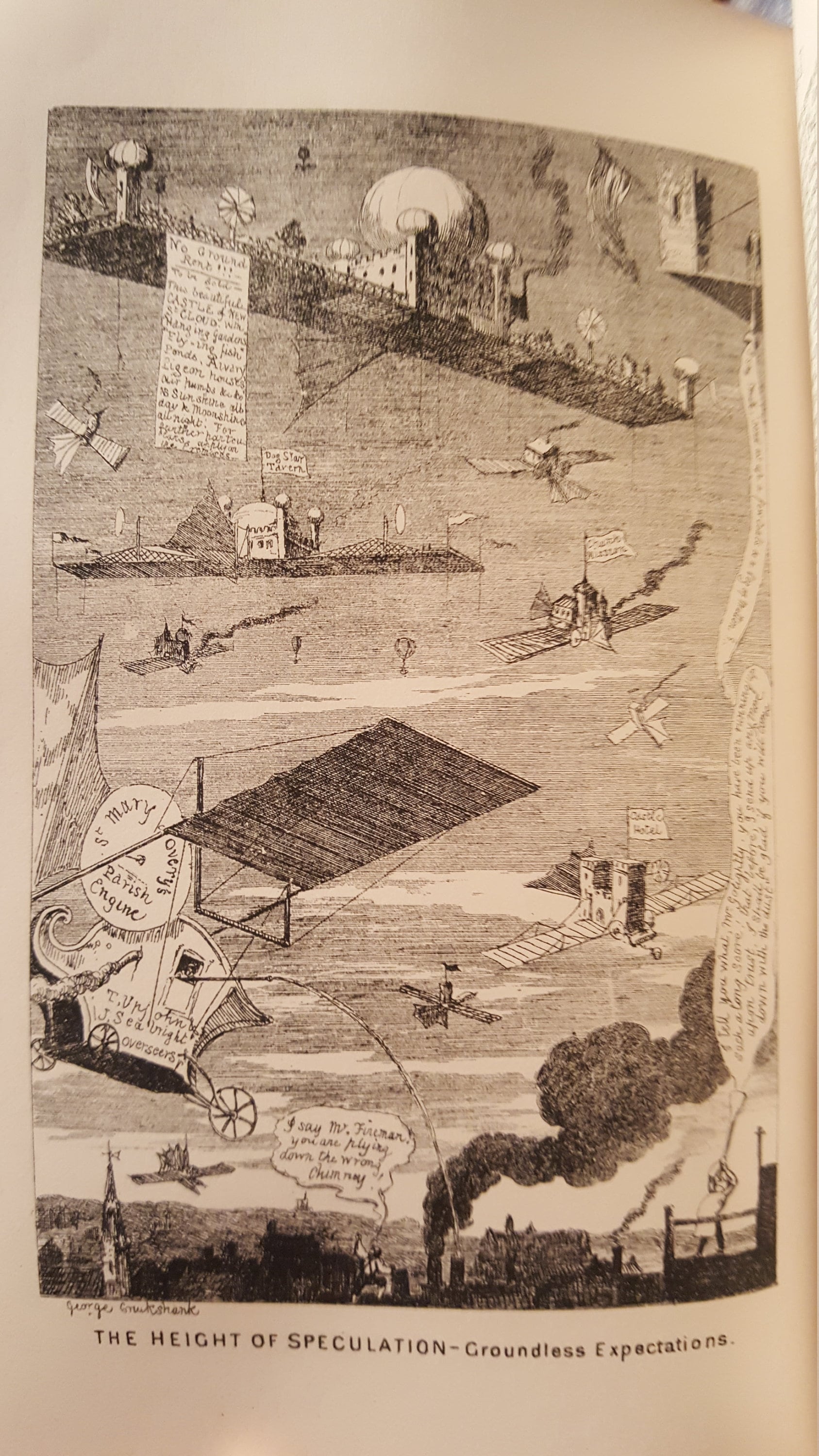 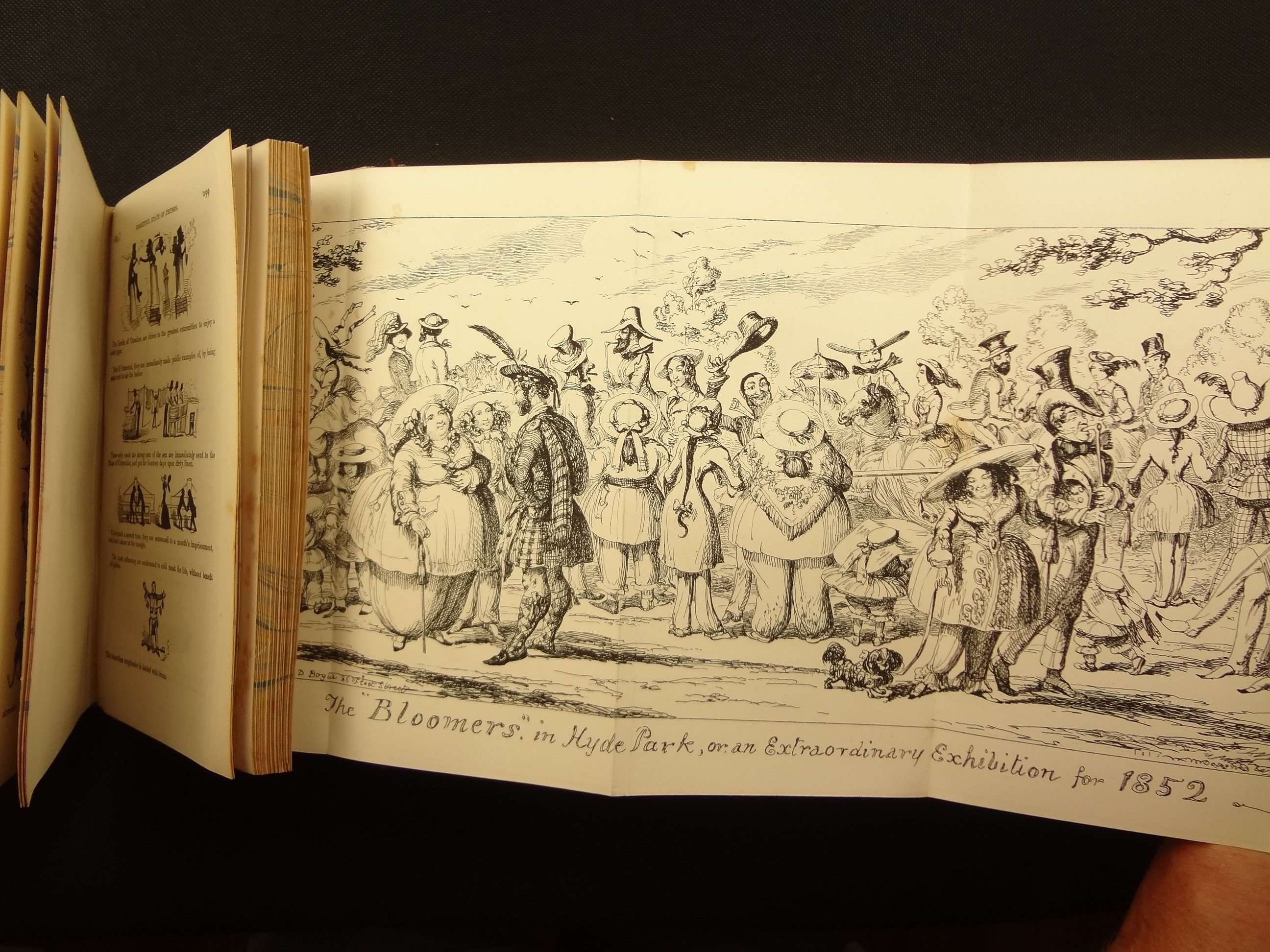 Two handsome tree calf bindings house the first and second series of the Comic Almanac (1835 to 1853), reprinted in the later 19th century in London and including the original illustrations (including fold-outs) by the venerable and humorous George Cruikshank. These are two volumes of humor and mirth, laid out year-to-year, and month-by-month, they present an interesting and enjoyable take on 19th century culture, as well as presenting poems, illustrations, etc. relevant to the changing seasons of the year and human character.

George Cruikshank (1792 –1878) was a British caricaturist and book illustrator, praised as the "modern Hogarth" during his life. His book illustrations for his friend Charles Dickens, and many other authors, reached an international audience. He gained notoriety with his political prints that attacked the royal family and leading politicians. In 1820 he received a royal bribe of £100 for a pledge "not to caricature His Majesty" (George IV of the United Kingdom) "in any immoral situation". His work included a personification of England named John Bull who was developed from about 1790 in conjunction with other British satirical artists such as James Gillray, and Thomas Rowlandson. Cruikshank replaced one of his major influences, James Gillray, as England's most popular satirist. For a generation he delineated Tories, Whigs and Radicals impartially. Satirical material came to him from every public event – wars abroad, the enemies of Britain (he was highly patriotic), the frolic, among other qualities, such as the weird and terrible, in which he excelled.

The comic annual was a collection of humorous anecdotes of the seasons, short stories, calendar,illustrations, etc.. A man named Rigdum Funnidos is given credit for a number of the issues of the Comic Almanack, but who was he? Did George Cruikshank use the name rather than credit himself for the editing (compiling?) of Comic Almanack from 1935-48, when Horace Mayhew took over. Cruikshank served as the principle illustrator for most of the annual’s nineteen years, creating issues “adorned with a dozen of ‘Righte Merrie’ cuts, pertaining to the months.”

Each measures approx. 18.5 x 12.5 x 5 cm. Tree calf bindings with a rolled border on the boards, in gilt. The spines have five raised cords and five of the compartments have a central floret with foliage in the corners; one compartment has the title and years in gilt on red Moroccan. Board edges are rolled in gilt. Turn-ins are rolled in blind. All edges are marbled. Marbled endpapers. Pages Volume 1 - (1) viii, 388, (1). Pages Volume 2 - (1) iiii, 428, (1)

See pictures. A little wear to bindings. Some light surface cracks to spine leather. 2 cm crack at top of volume two front joint (between spine and board at top). Slightly dusty top edge. Some ownership names and bookseller numbers on blank front endpapers. Endpapers have foxed and foxed the text block pages closes to them, which includes the frontis and title pages; there are only occasional spots of fox throughout (see pictures) but it is not excessive. Bookseller graphite note on the back of volume one rear flyleaf also. A handsome duo, very enjoyable to peruse.