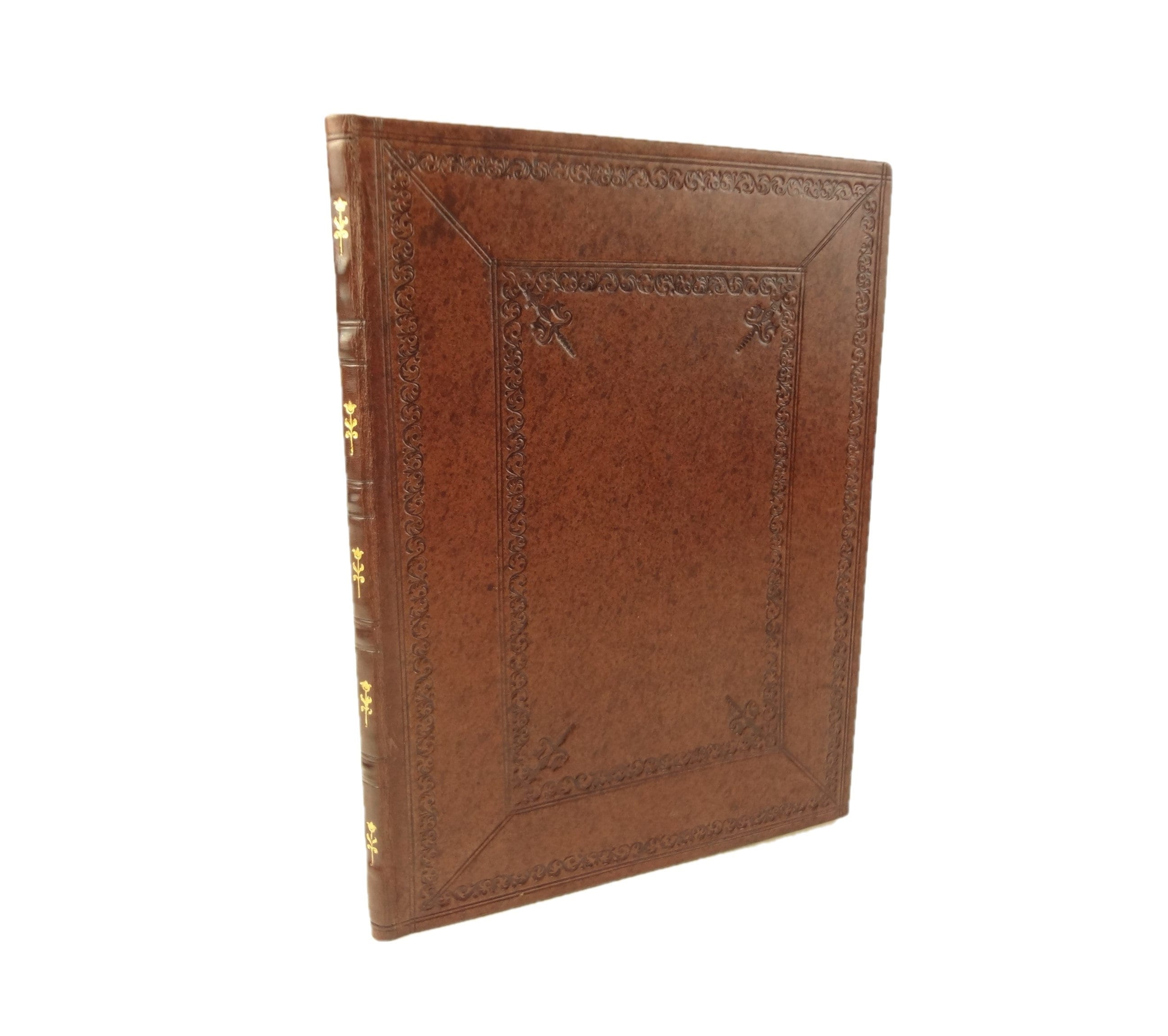 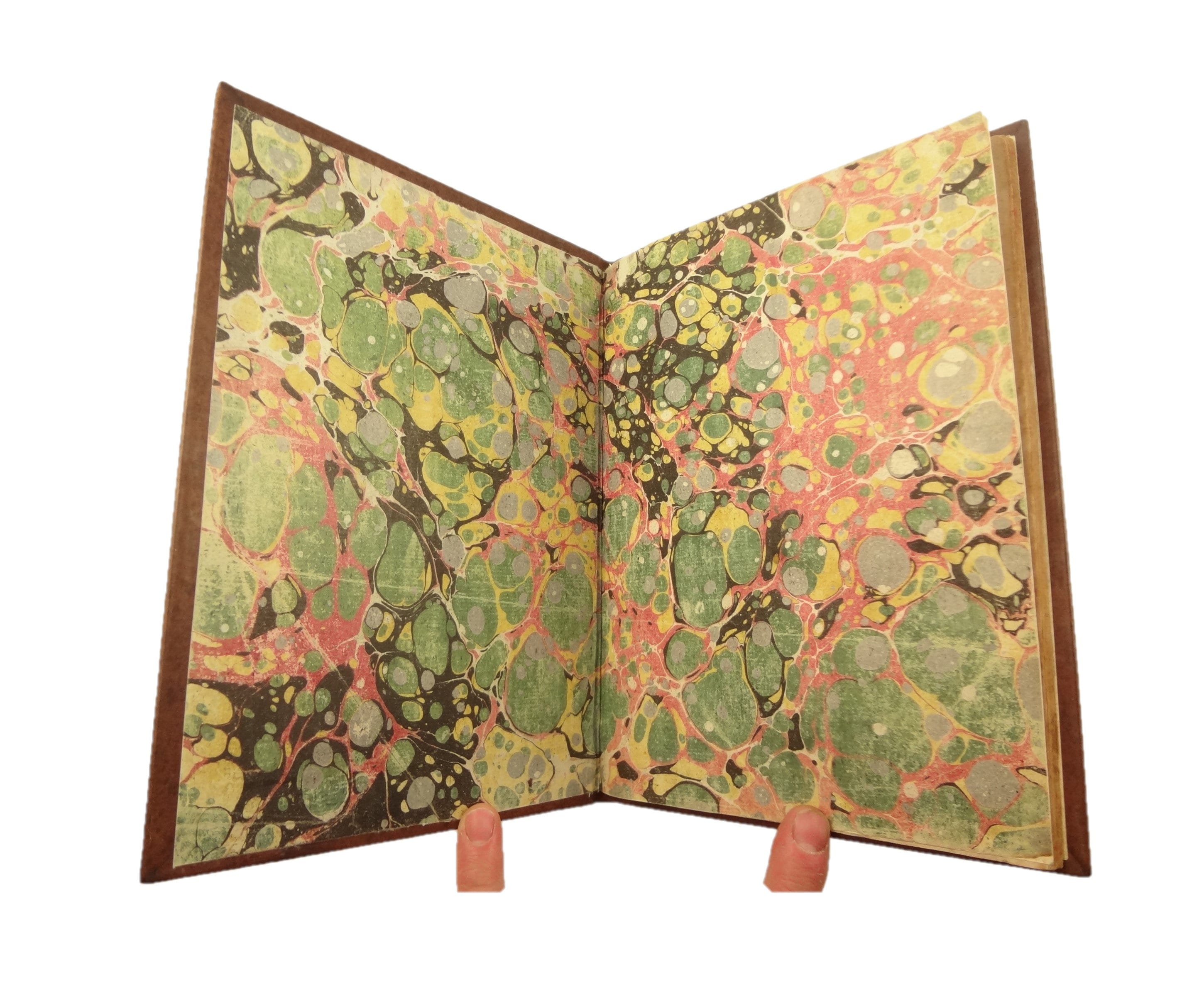 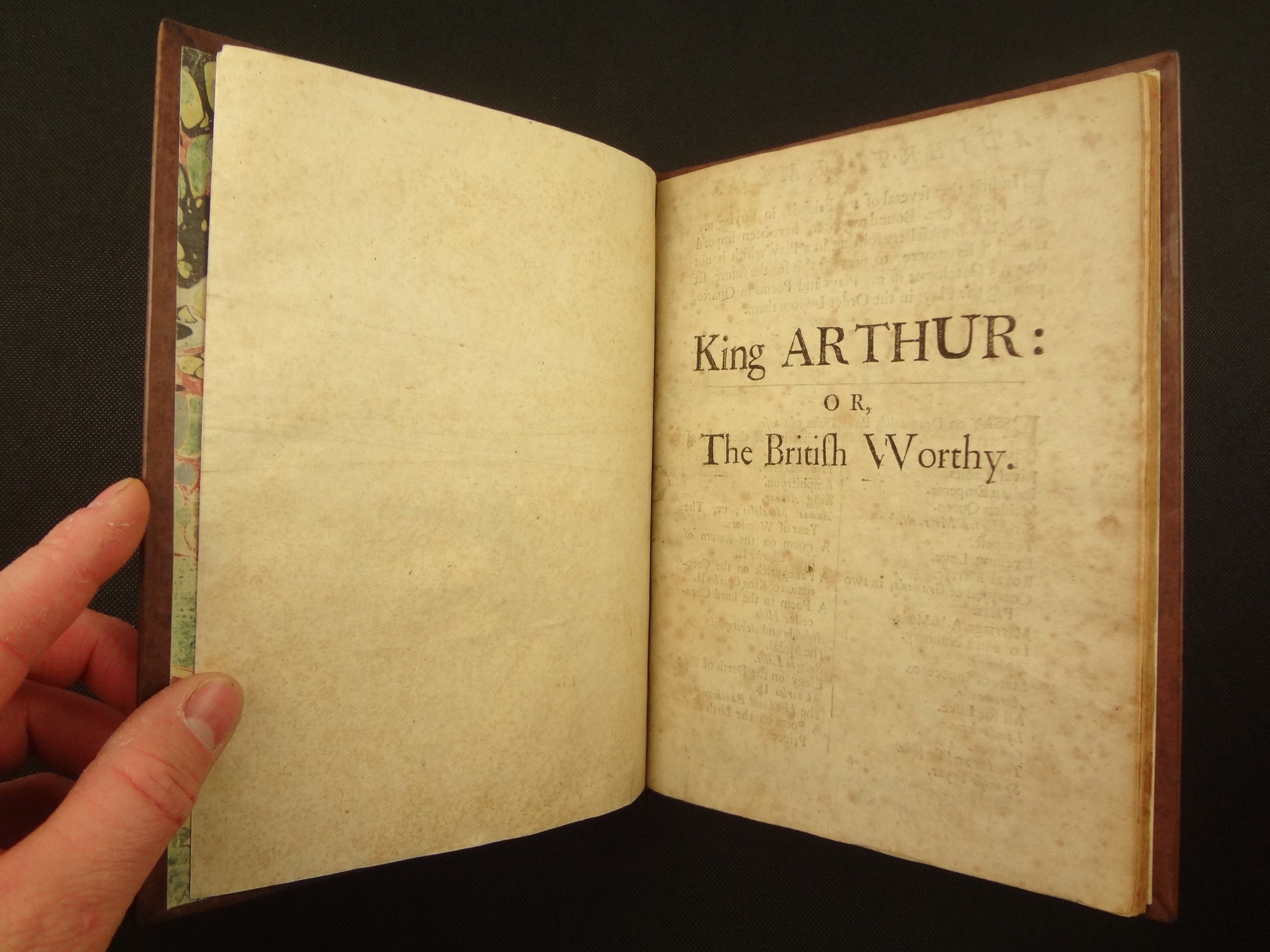 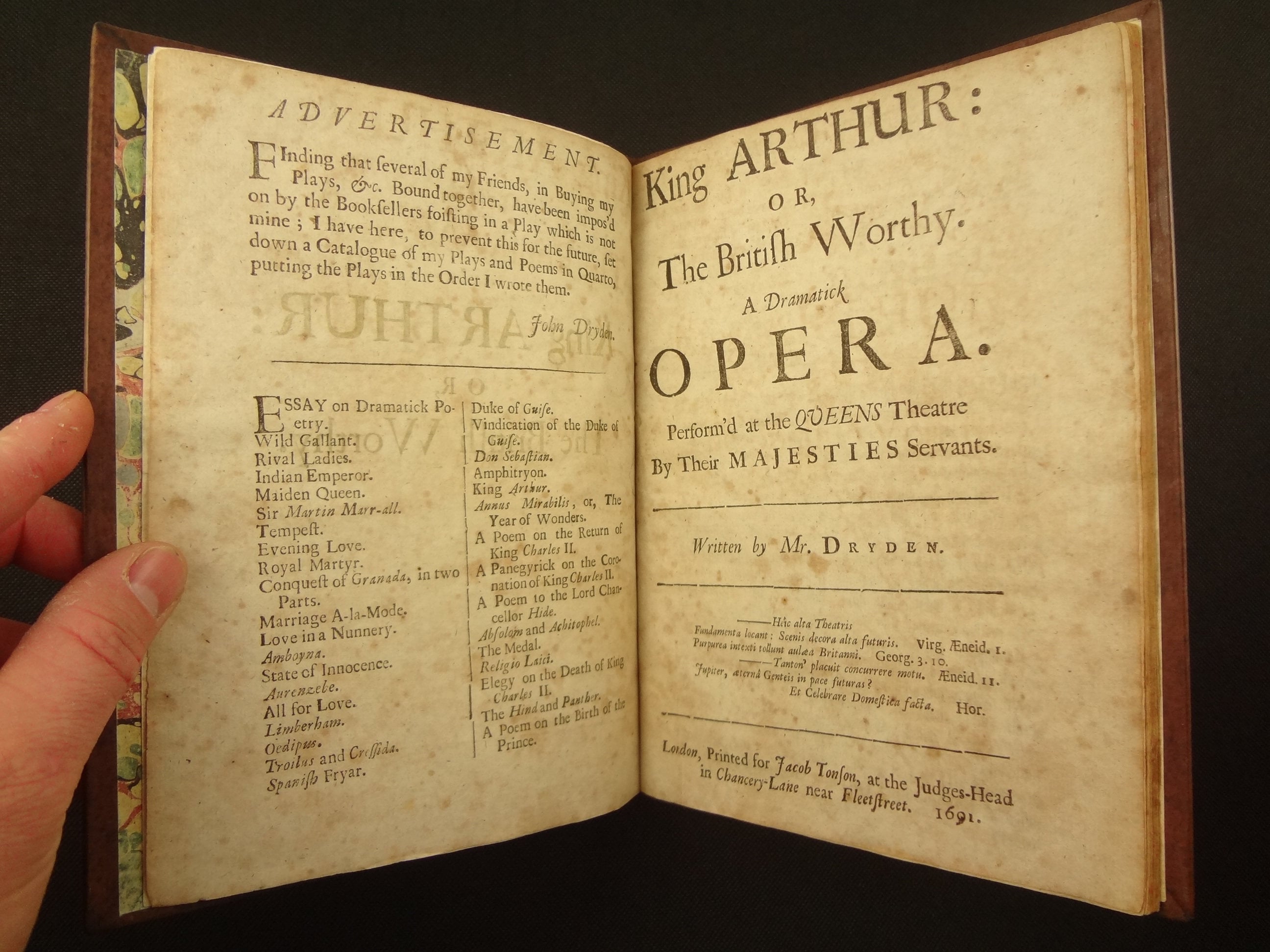 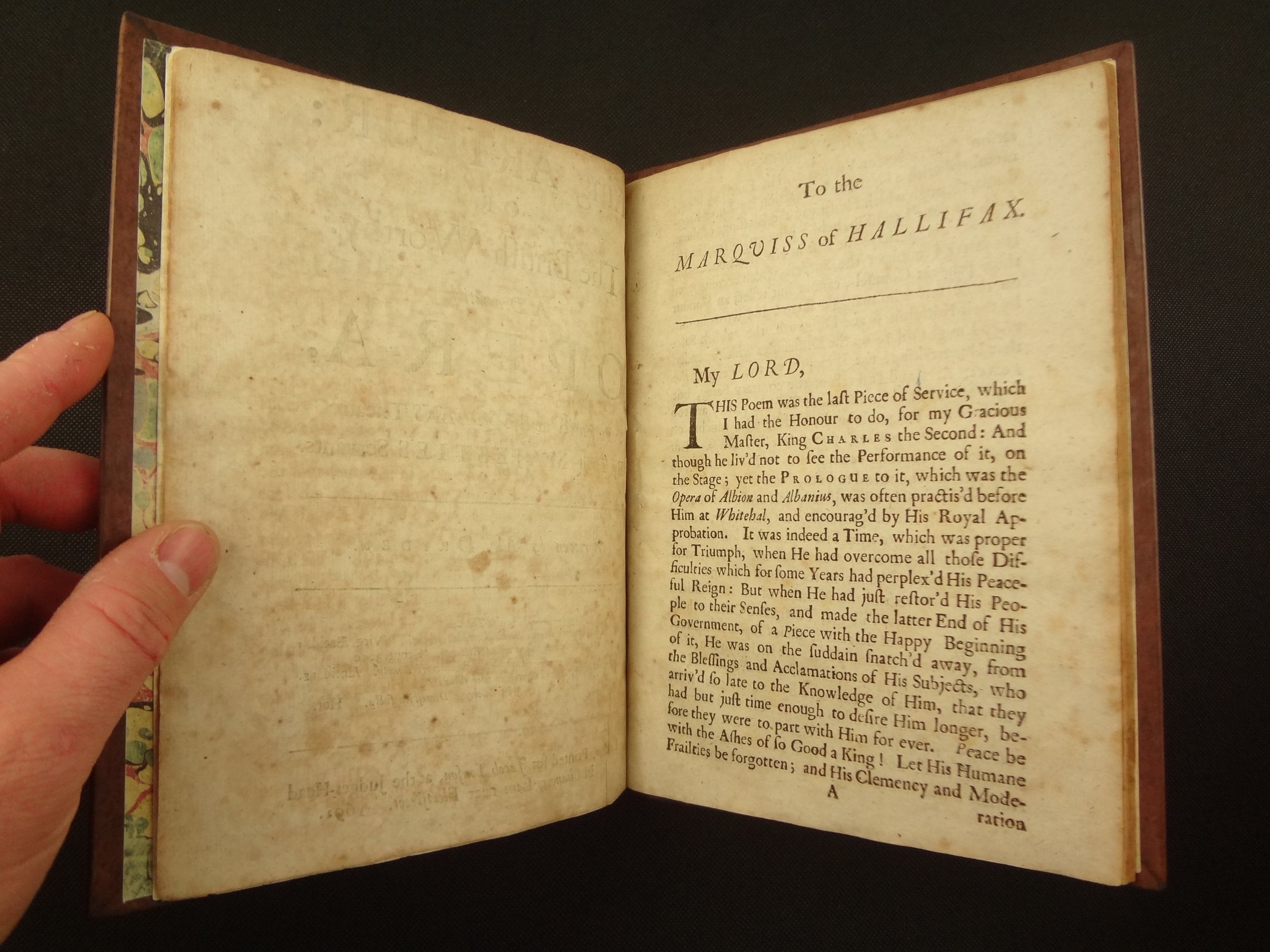 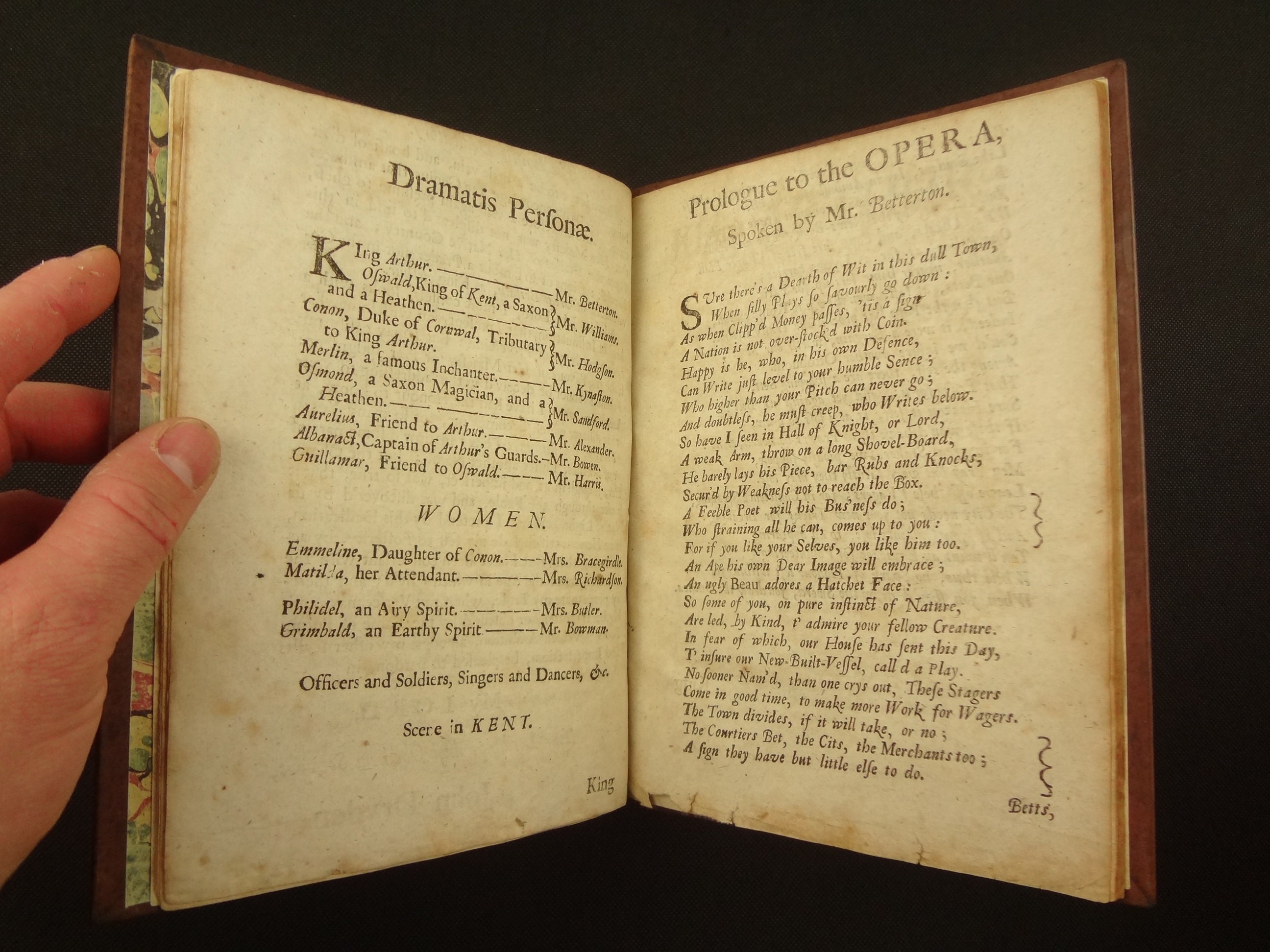 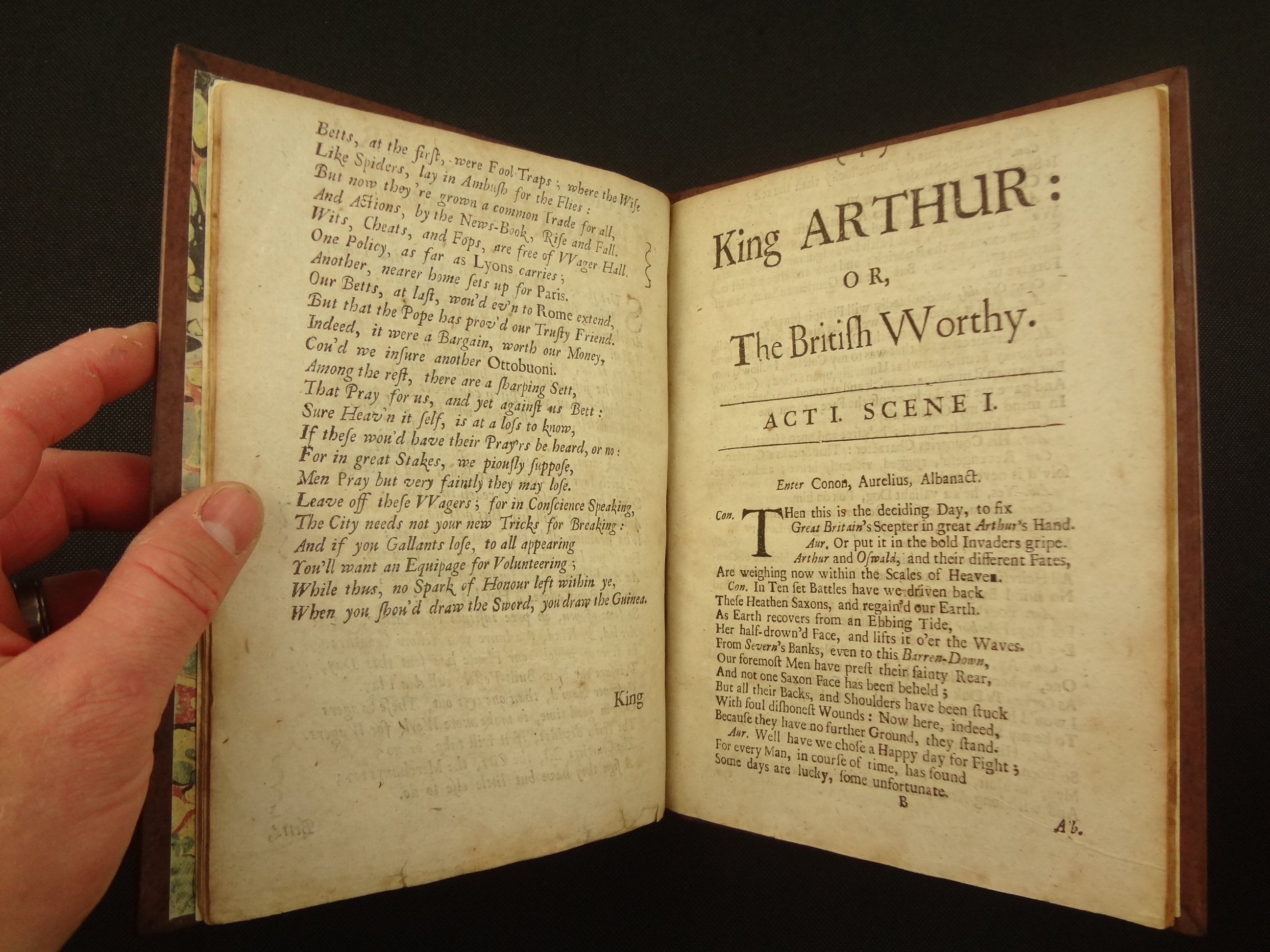 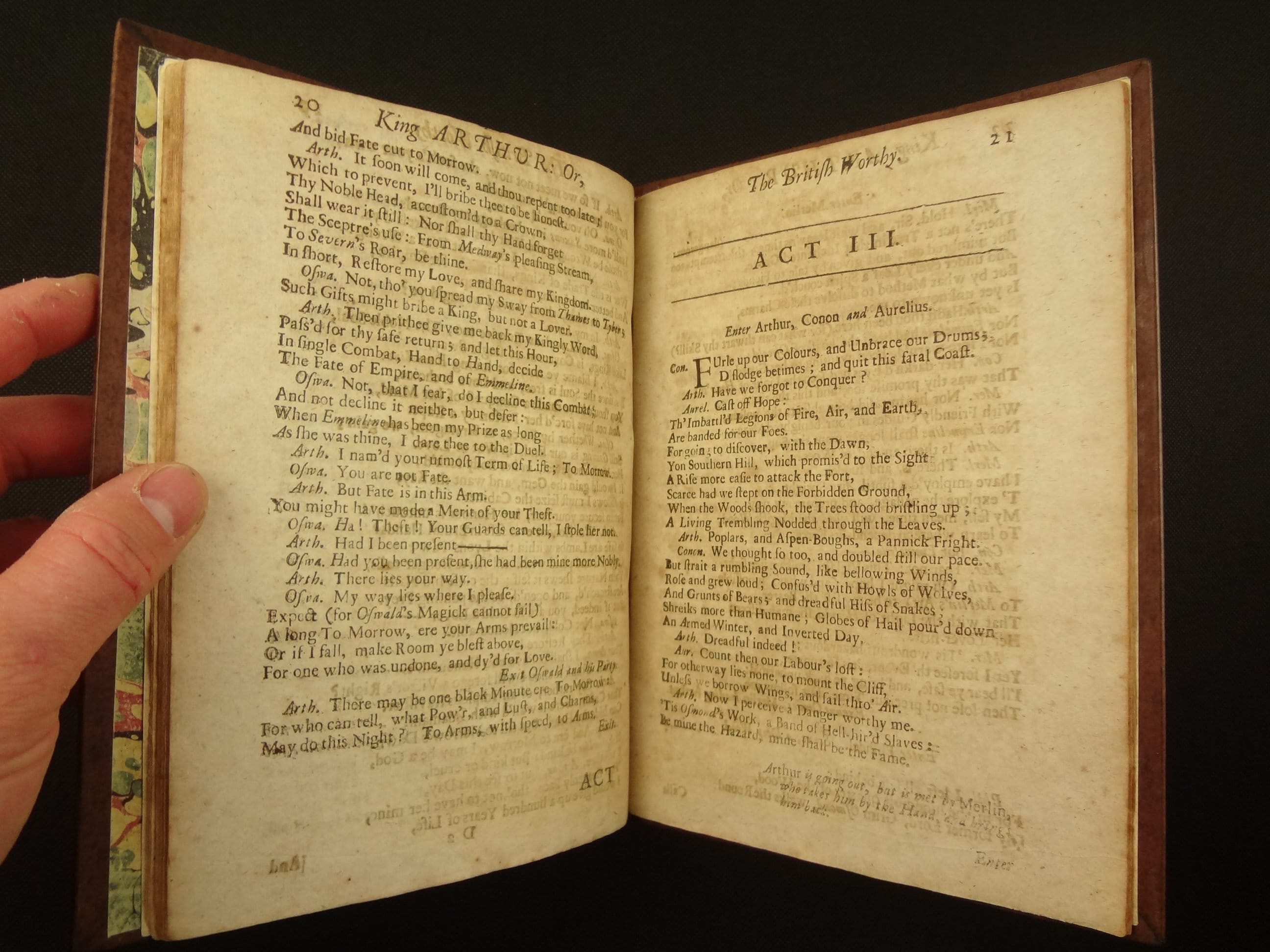 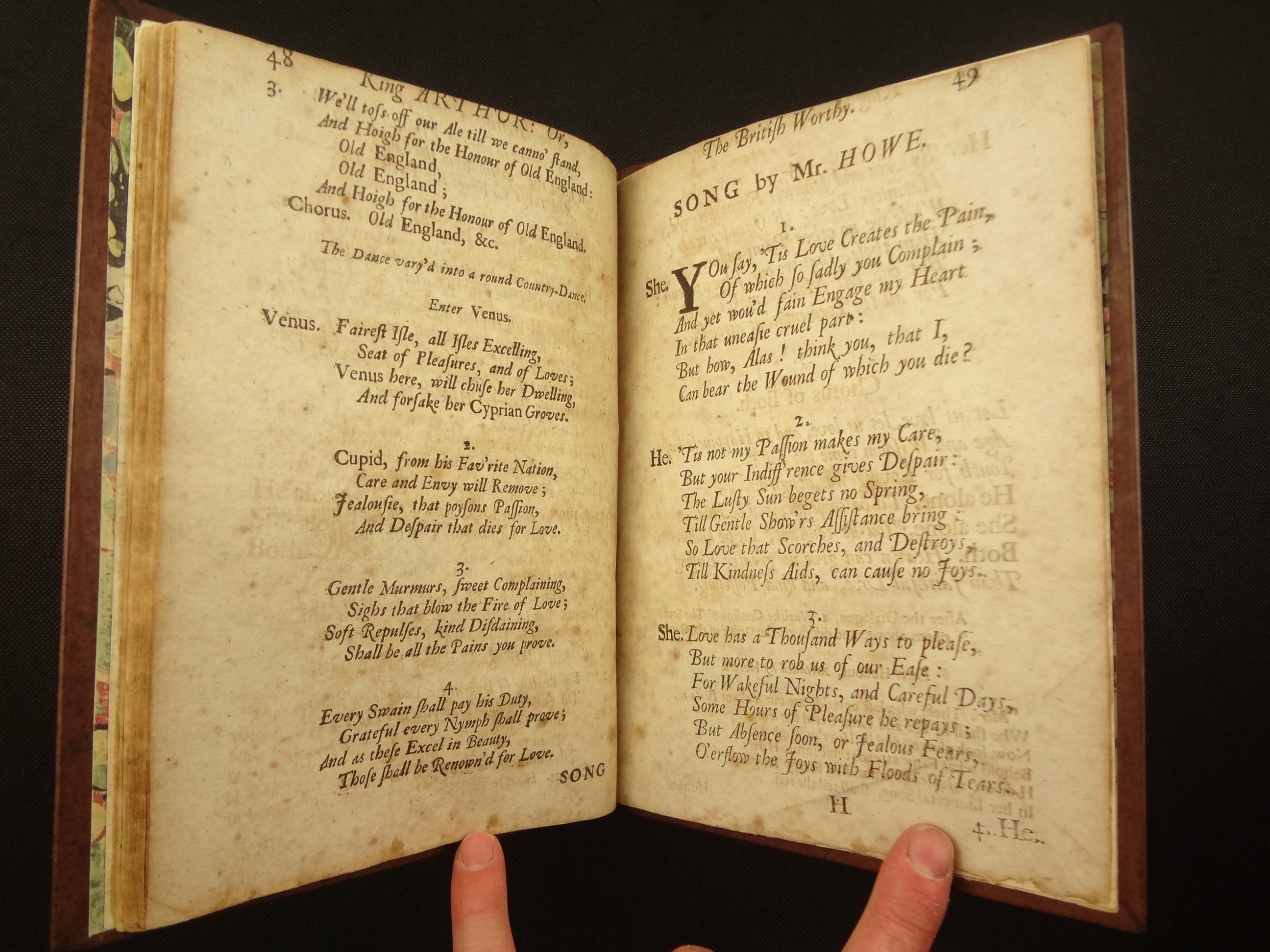 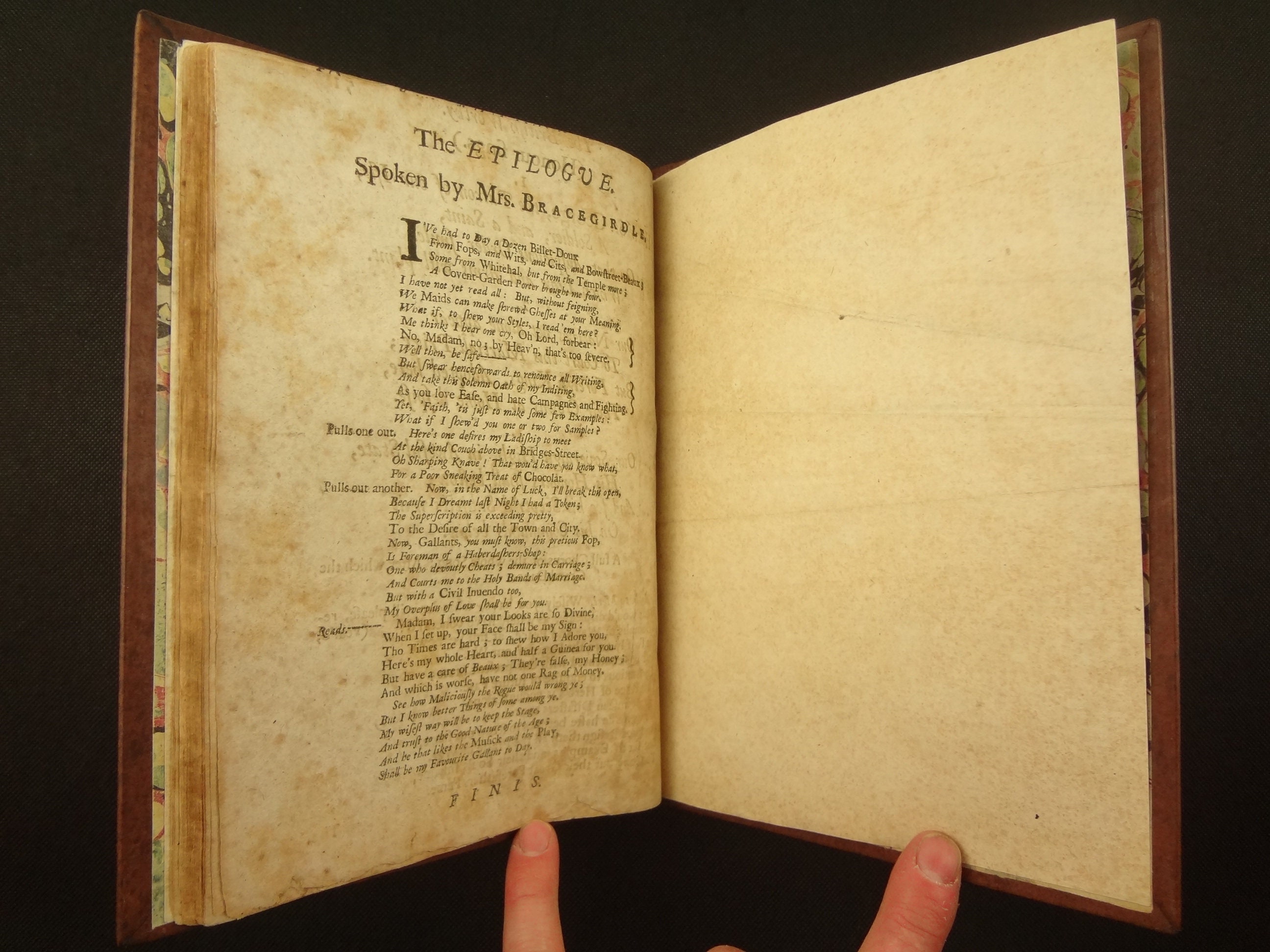 1st edition of John Dryden's King Arthur: or, The British Worthy, printed in 1691 for Jacob Tonson. An early, hard to find, Arthurian tale.

"The plot is based on the battles between King Arthur's Britons and the Saxons, rather than the legends of Camelot (although Merlin does make an appearance). It is a Restoration spectacular, including such supernatural characters as Cupid and Venus plus references to the Germanic gods of the Saxons, Woden, Thor, and Freya. The tale centers on Arthur's endeavors to recover his fiancée, the blind Cornish Princess Emmeline, who has been abducted by his arch-enemy, the Saxon King Oswald of Kent."

"King Arthur is a 'dramatick opera' or semi-opera: the principal characters do not sing, except if they are supernatural, pastoral or, in the case of Comus and the popular 'Your hay it is mow'd, drunk'. Secondary characters sing to them, usually as diegetic entertainment, but in Act 4 and parts of Act 2, as supernatural beckonings. The singing in Act 1 is religious observance by the Saxons, ending with their heroic afterlife in Valhalla. The protagonists are actors, as a great deal of King Arthur consists of spoken text. This was normal practice in 17th century English opera." - Wiki

When first printed, this work did not have a prologue and epilogue, they were added later. This is a rare example, noted by Fredson Bowers, Times Literary Supplement, 10 April 1953, p. 244, where the last leaf and the epilogue have been placed on the same leaf (perhaps a replacement leaf). This is also noted in the OCLC notes for 76963166. There are several OCLC entries for this work; entering into each one I counted seven physical copies registered in the world's libraries:

OCLC #559928817, at the British Library, as well as a second copy (different epilogue) which is scanned into Google; the rare non-cancelled copy. OCLC #76963166 at University of Illinois, National Library of Australia, and State Library of Victoria, OCLC #221431844 at the University of Sydney (although I wonder if this is a duplicate of the other Australia entry), OCLC #1011791787 at the Victoria and Albert Art Library, and OCLC #24299906 at Bayerische Staatsbiliothek.

Measures approx. 22 x 16 x 1 cm, small 4to. Modern calf binding in the Cambridge style; four raised bands to spine framed in blind double fillet, with a tulip in each of the five compartments. Boards in blind, with double fillet outer and inner borders, each with a leaf roll within them, and the inner compartment has corner fleurons. Marbled endpapers. Page edges marbled (very faded). Pages - half-title/advertisement, title page, [10 - Dedicatory, Dramatis Personae, Prologue], 51, [1 - epilogue]. Pagination - 1/2 title, title, A4, Prologue, B to G4, H2

The recent binding wonderfully respects the work, even retaining the (faded) original marbling on the page edges.