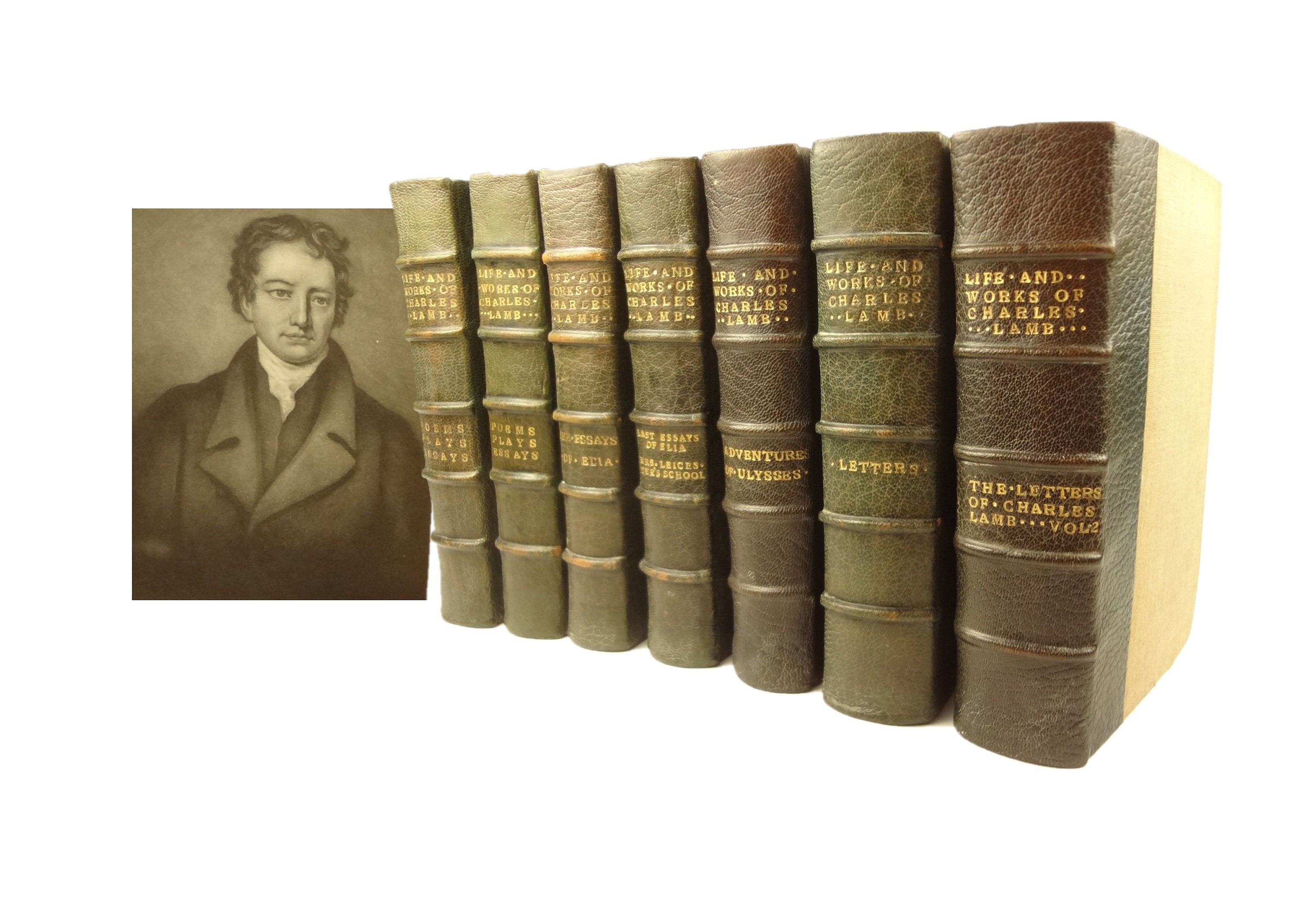 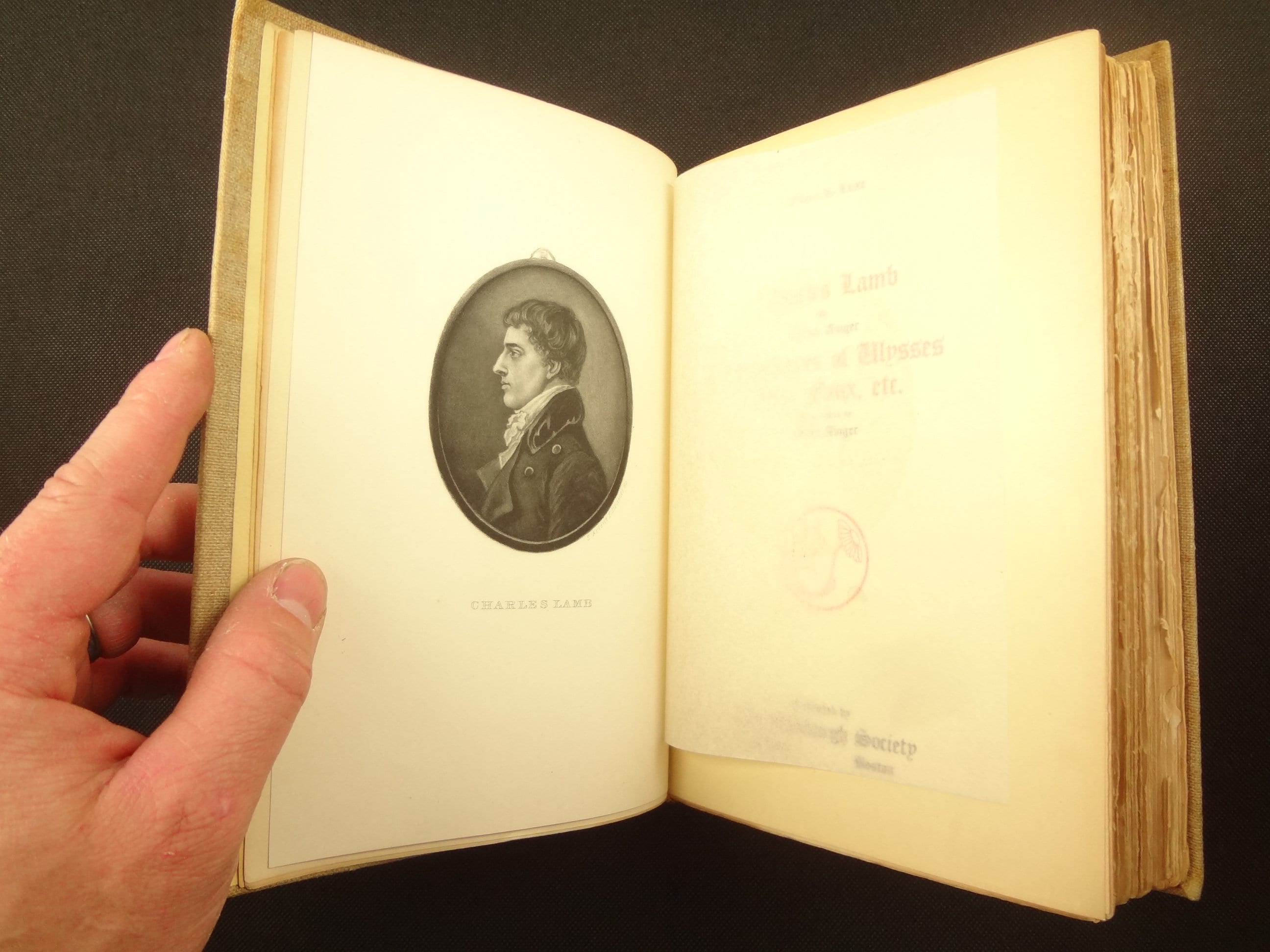 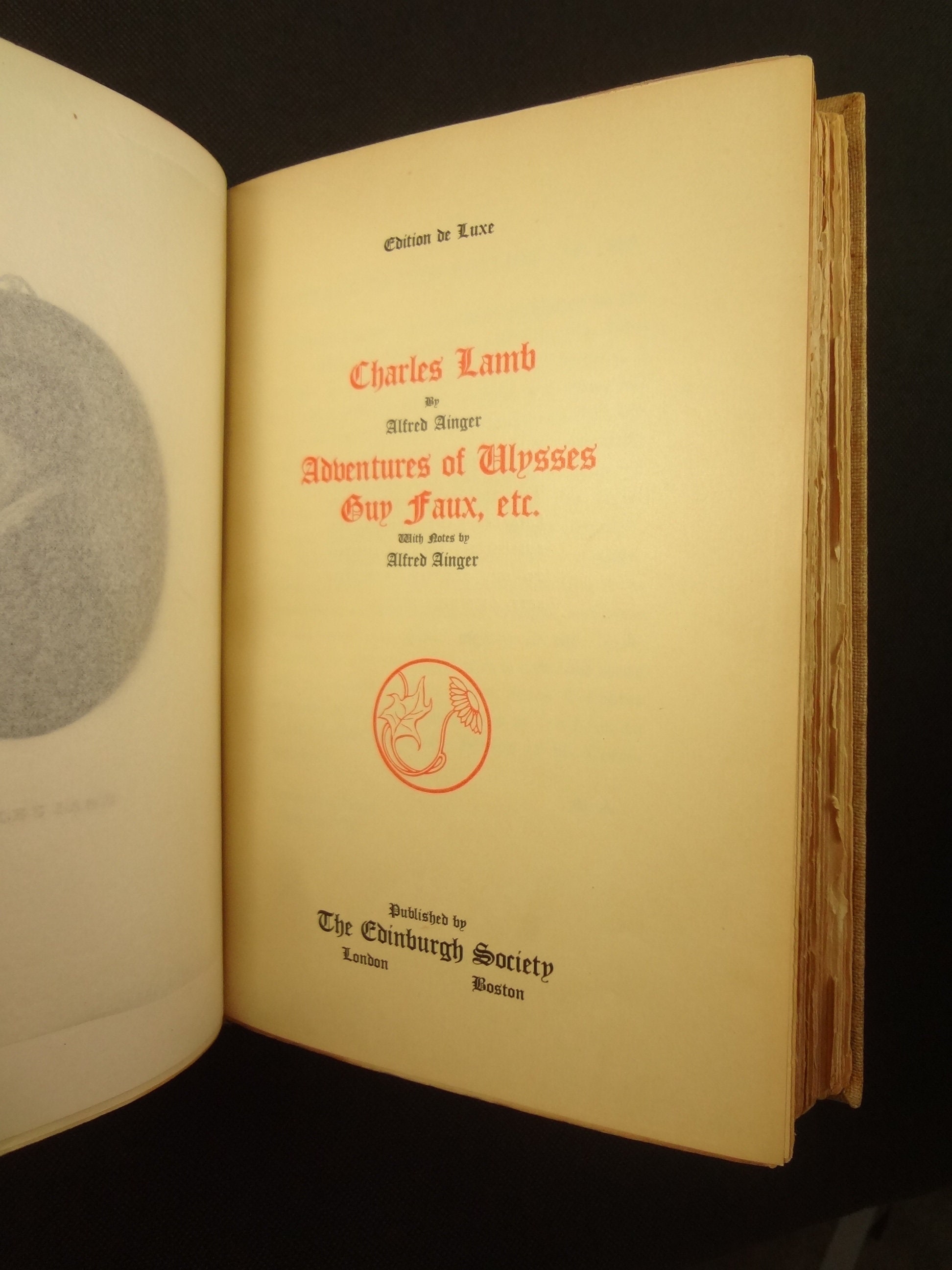 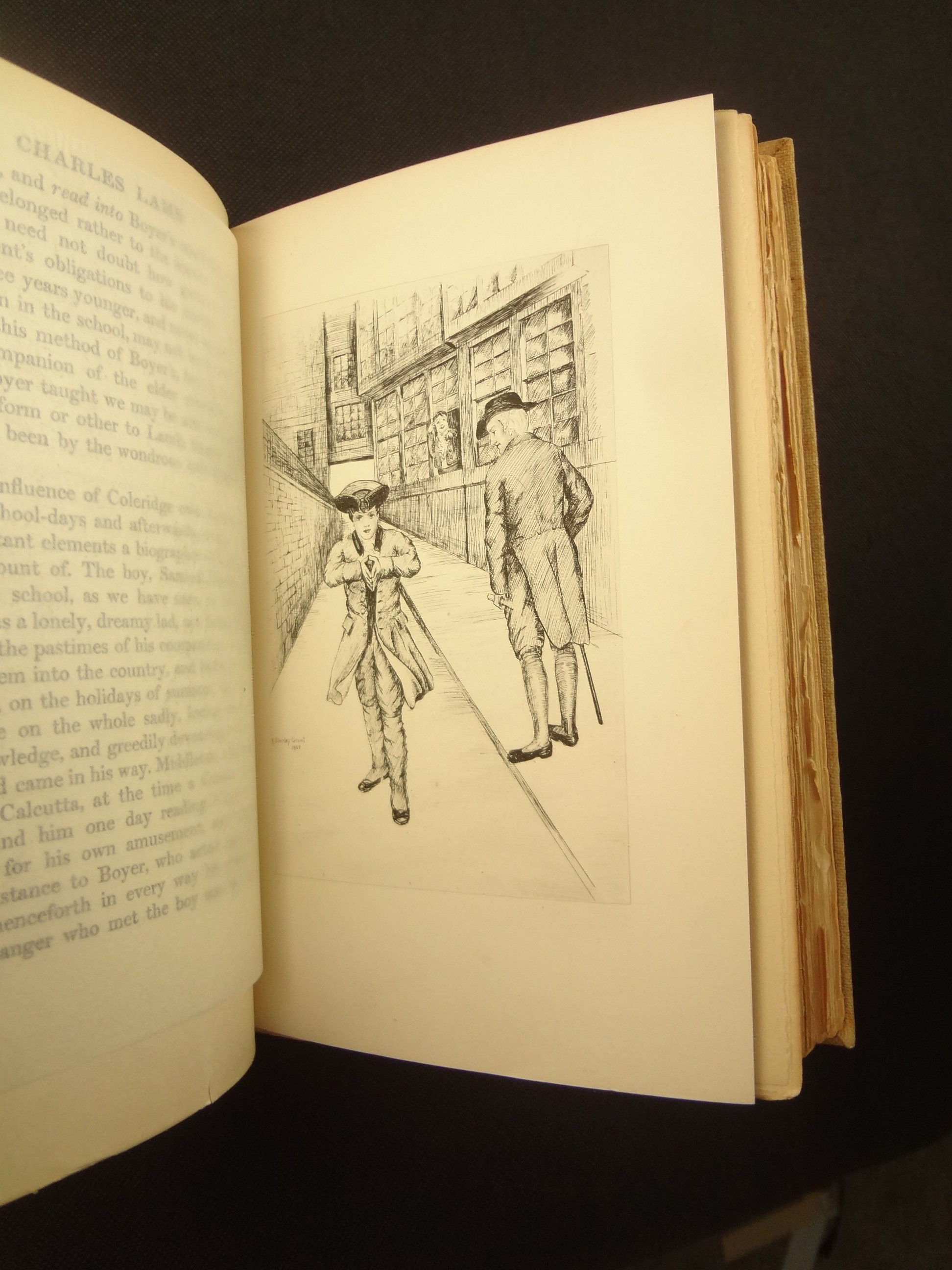 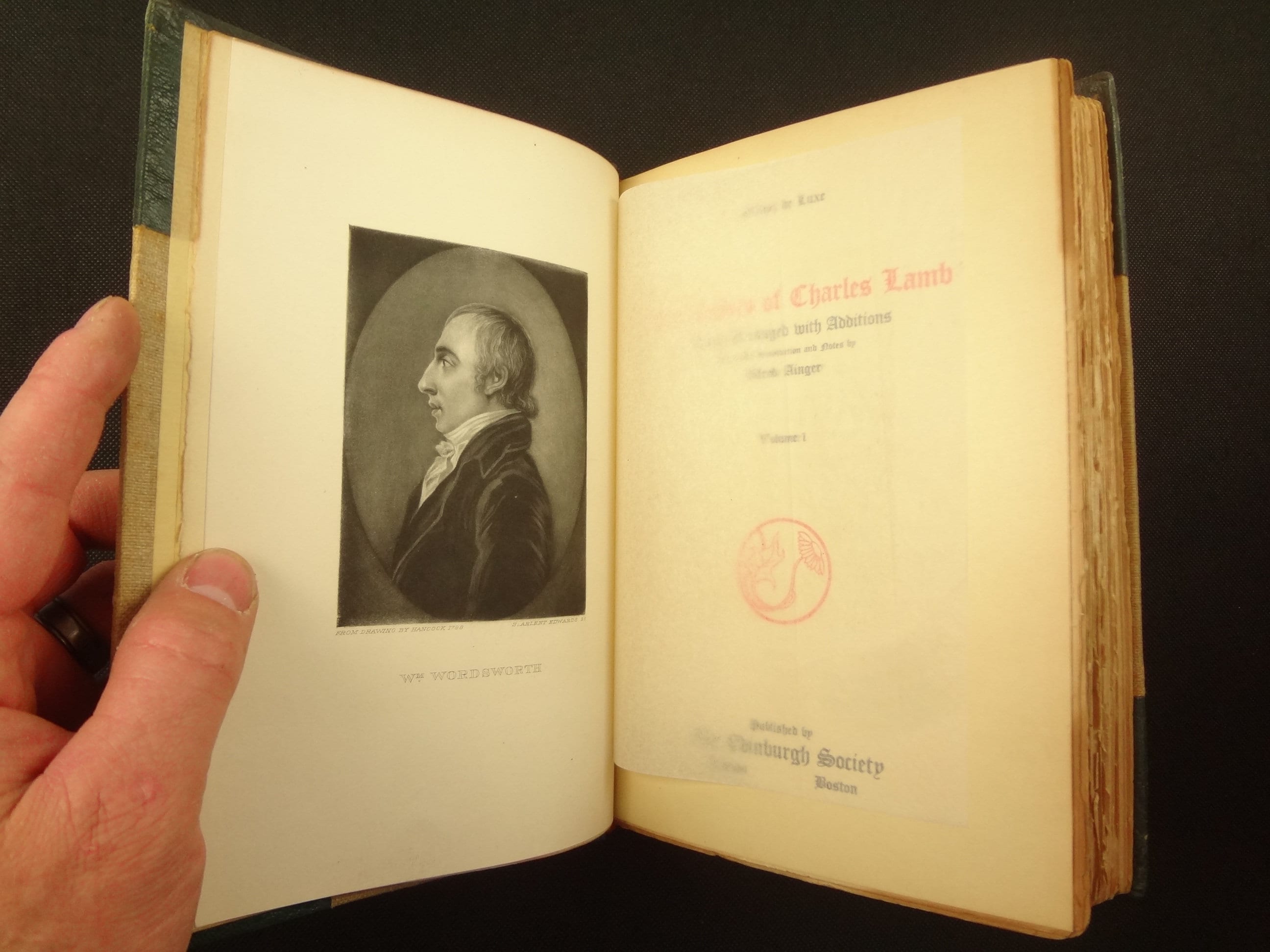 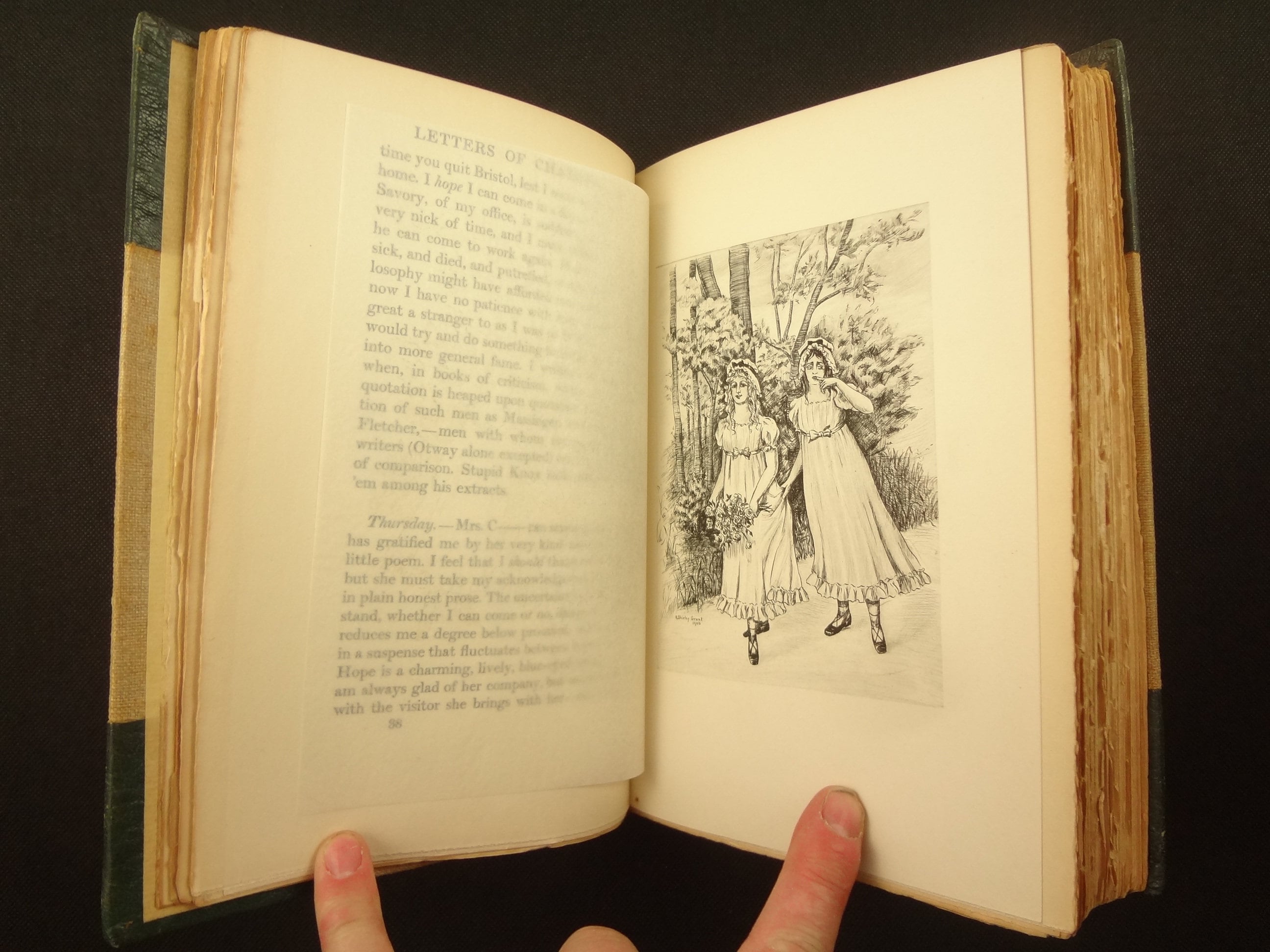 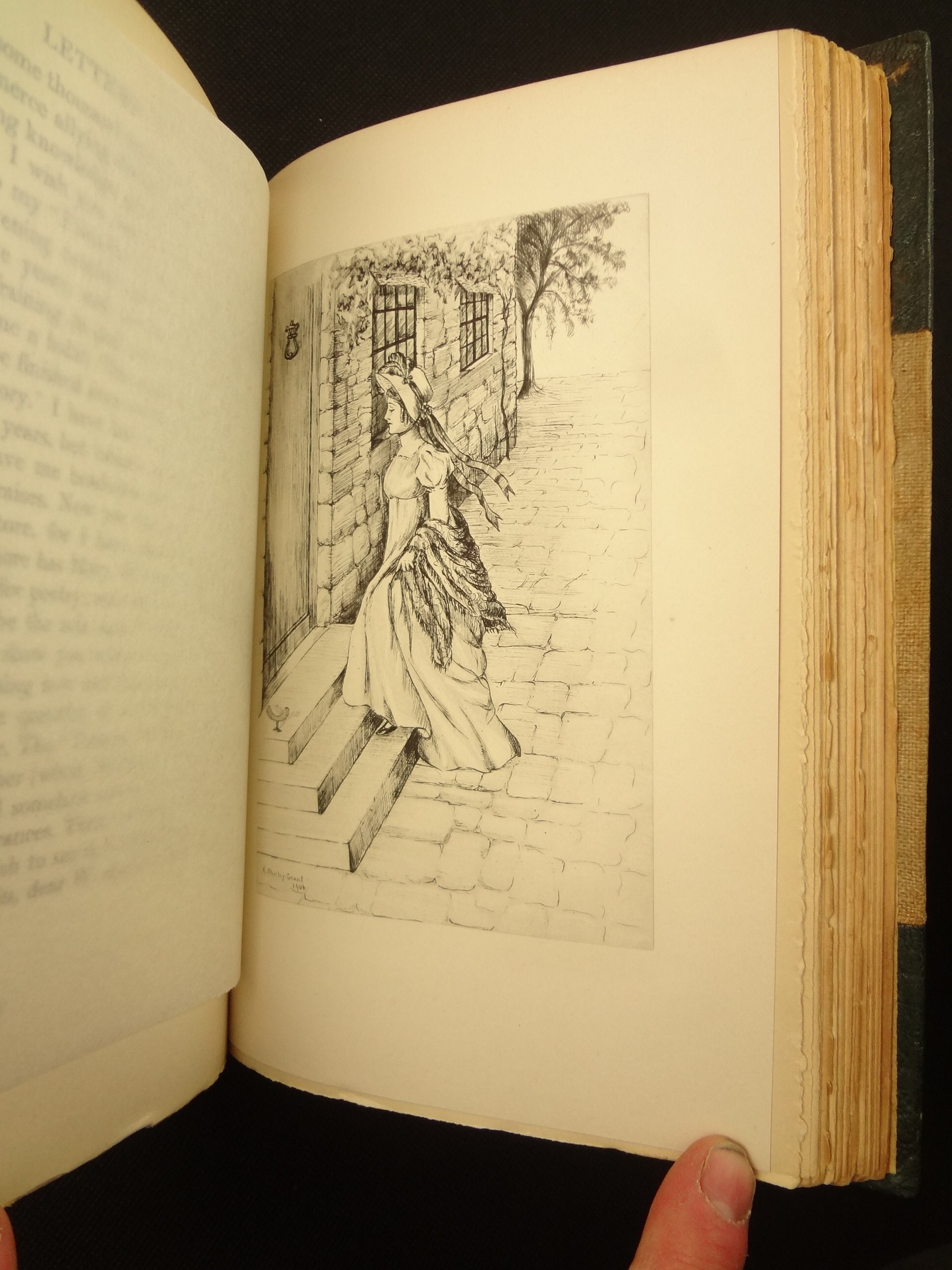 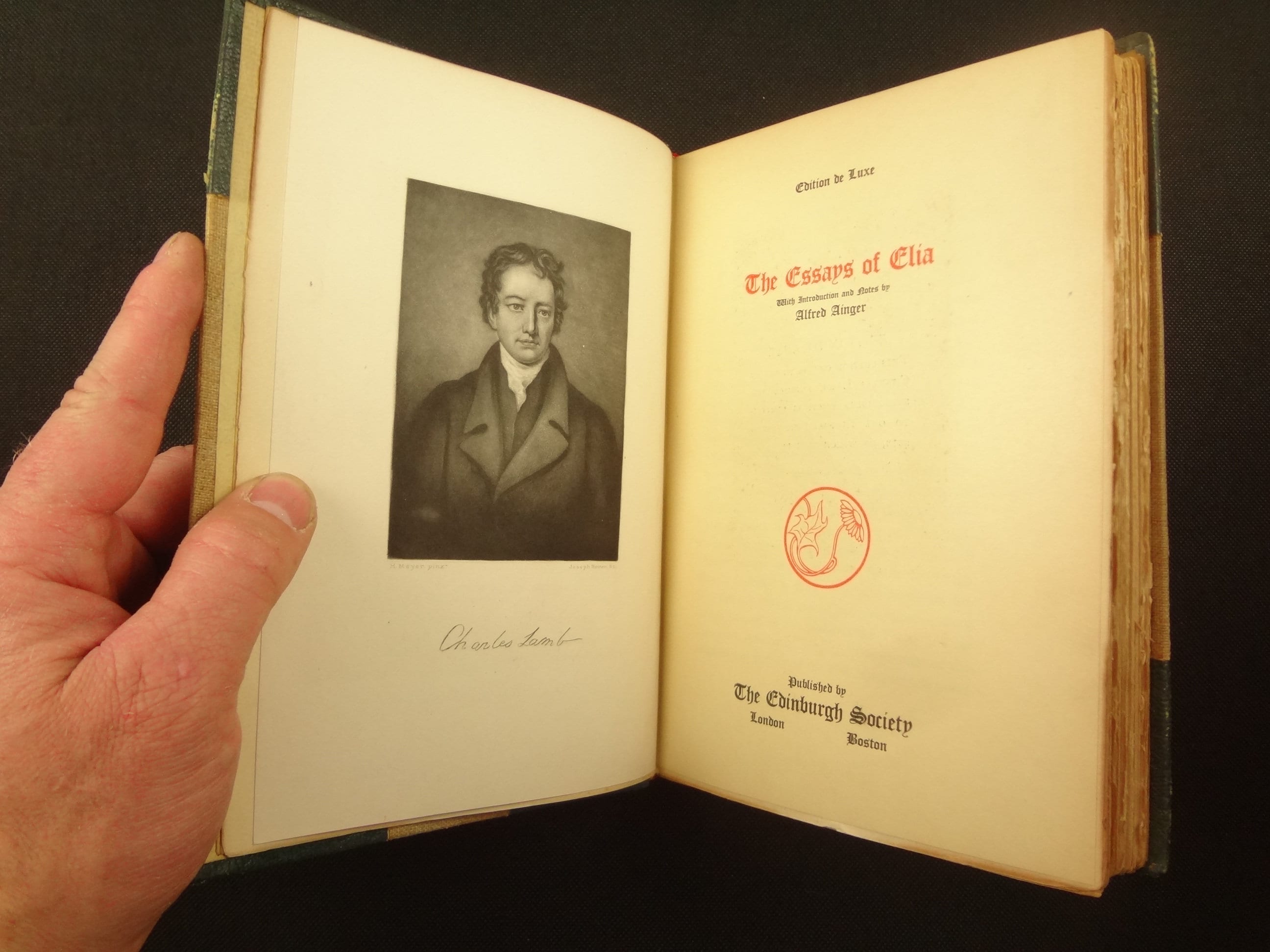 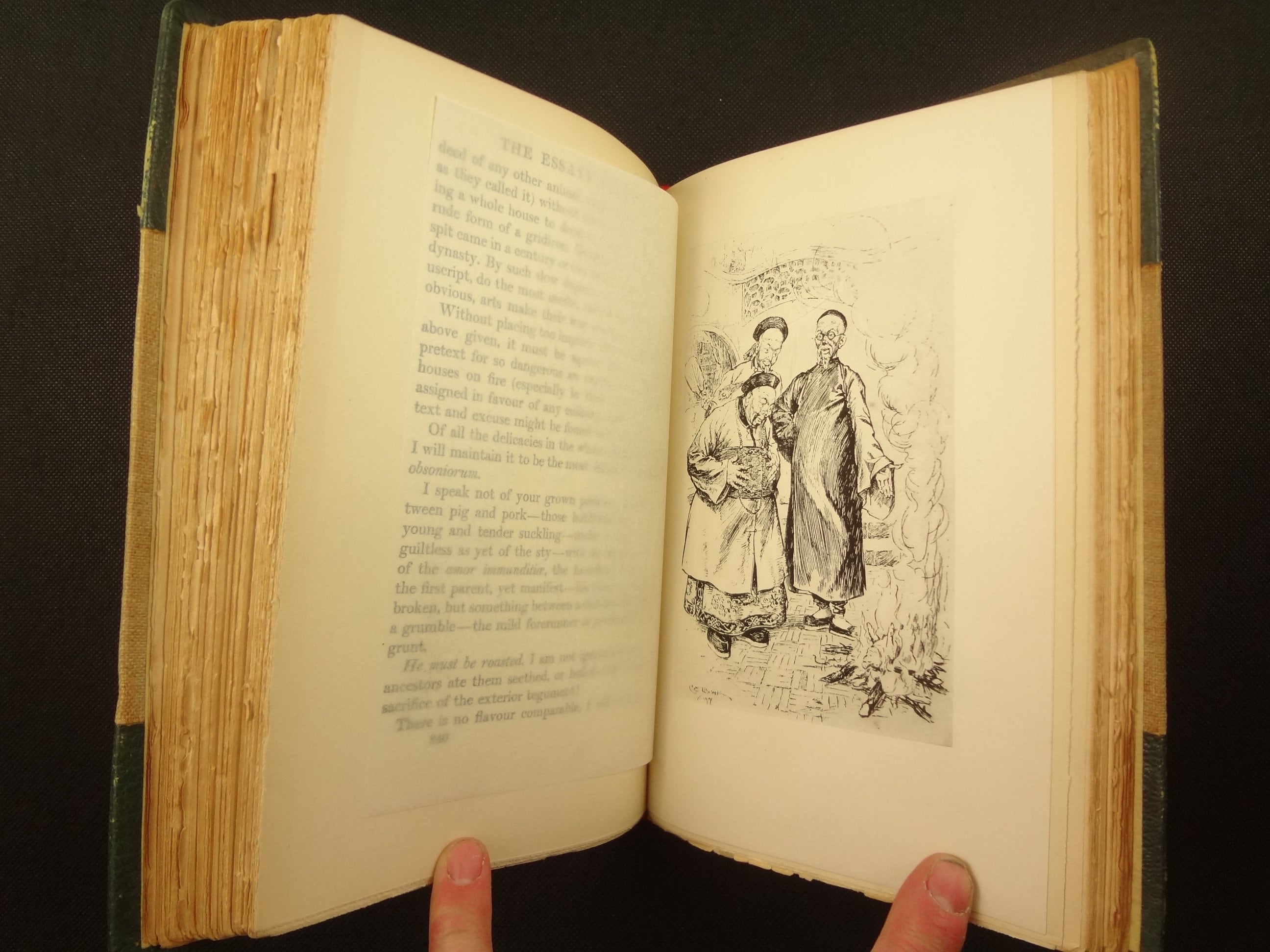 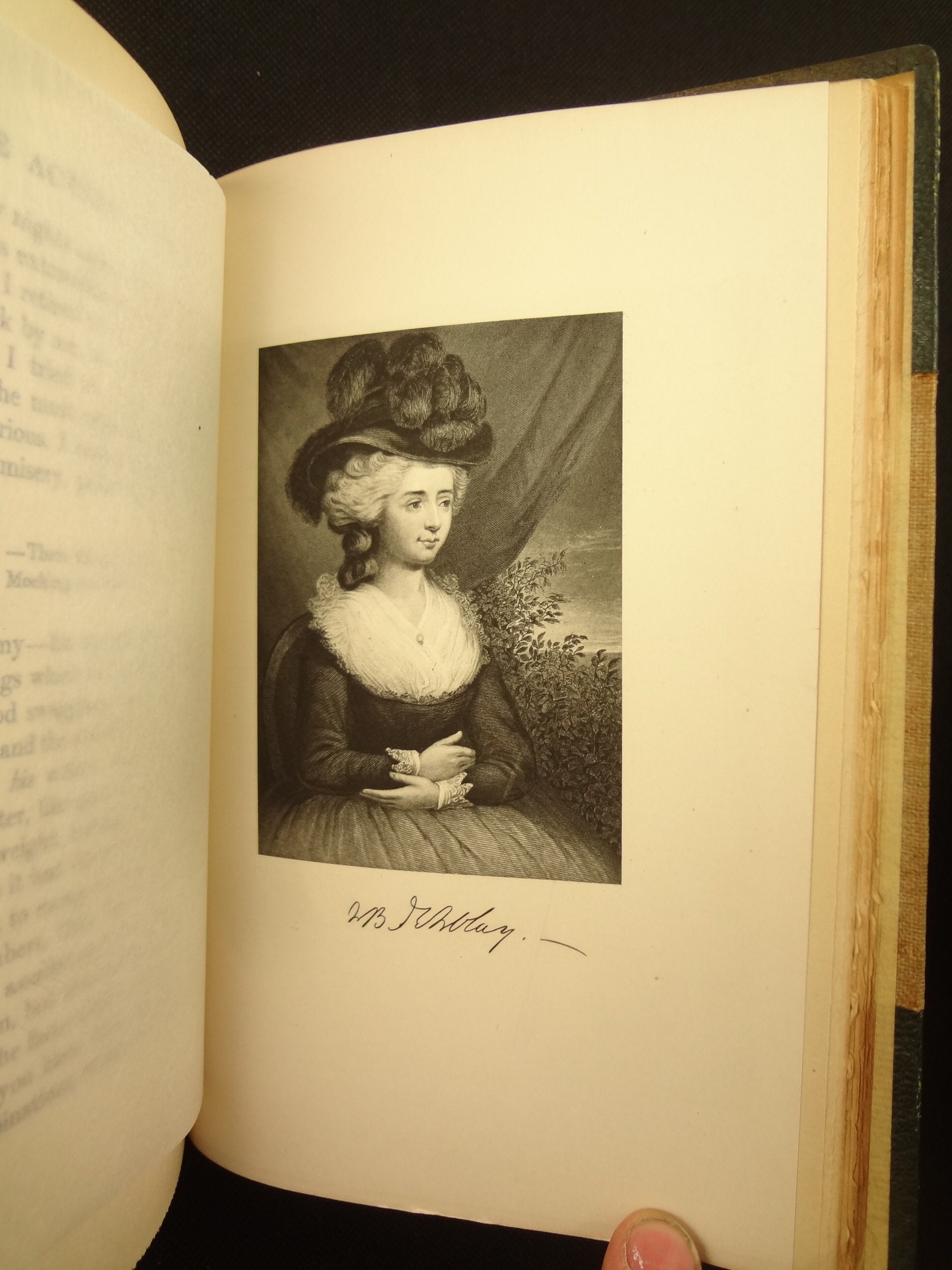 Life and Works of Charles Lamb, limited "Deluxe Edition", limited to one thousand copies, of which this is numbered 215. In strong bindings with gilt tooled spines that display well.

Included are:
Poems, Plays and Essays in two volumes
Letters in two books (but three volumes, two bound in the second binding).
The Essays of Elia
The Last Essays of Elia and Mrs. Leicester's School in a shared binding.
The Adventures of Ulysses, Guy Faux, Life of, etc.

“Charles Lamb was an English essayist, poet, and antiquarian, best known for his Essays of Elia. Friends with such literary luminaries as Samuel Taylor Coleridge, Robert Southey, William Wordsworth, and William Hazlitt, Lamb was at the centre of a major literary circle in England. He has been referred to by E. V. Lucas, his principal biographer, as ‘the most lovable figure in English literature’.” (Wikipedia)

“Lamb achieved lasting fame as a writer during the years 1820-1825, when he captivated the discerning English reading public with his personal essays in the London Magazine, collected as Essays of Elia (1823) and The Last Essays of Elia (1833). Known for their charm, humor, and perception, and laced with idiosyncrasies, these essays appear to be modest in scope, but their soundings are deep, and their ripples extend to embrace much of human life—particularly the life of the imagination.” (Poetry Foundation)

Each measures approx. 22 x 15 cm, ranging from 3 to 5 cm thick. The spine leather is thick, with strong red endbands as well. Four of the books also have leather corners on the boards. The cloth is also strong, almost buckram like. Several different endpapers (pastedown/flyleaf) were used; perhaps these were bound over a period of printing time? Top edges a faded gilt, others uncut but mostly opened. Spines with five raised bands, "Life and Works of Charles Lamb" in gilt in one compartment, title in gilt in second compartment.

Limited "Deluxe Edition", with the first volumes of the Poems/Plays/Essays volume numbered 215; the other volumes did not have the number filled in.

There is no date and very little information in Worldcat (OCLC #253369). I dated them to 1909 based on the gift inscription.

See pictures. A handsome and strong set. Oddly, three of the volumes were not bound with corner leather (on the boards). The spines are slightly faded. Some edge wear. The cloth shows a little dust. Some dust to top edge. Leather is thick and feels healthy (not dry). Thumb sized spot on back of v.2 plays. Turn-ins have ghosted the flyleaves.

Pages clean with a very occasional spot. Slightest toning at edges. Uncut fore and bottom edge, sometimes with a rough or chipped edge from opening, and with an occasional unopened quire. Thumb mark at title page of v2 poems and very small indent (1 cm wide) at fore-edge of first 25 pages. Front endleaf of V1 Letters slightly foxed; 1909 gift inscription on back of frontis portrait. Not all illustrations have a tissue, but most. Last Essays front endpaper lightly foxed; small marks at top of title page in upper margin.

Despite condition notes, the books have a pleasing patina and seem like they've been well taken care of.