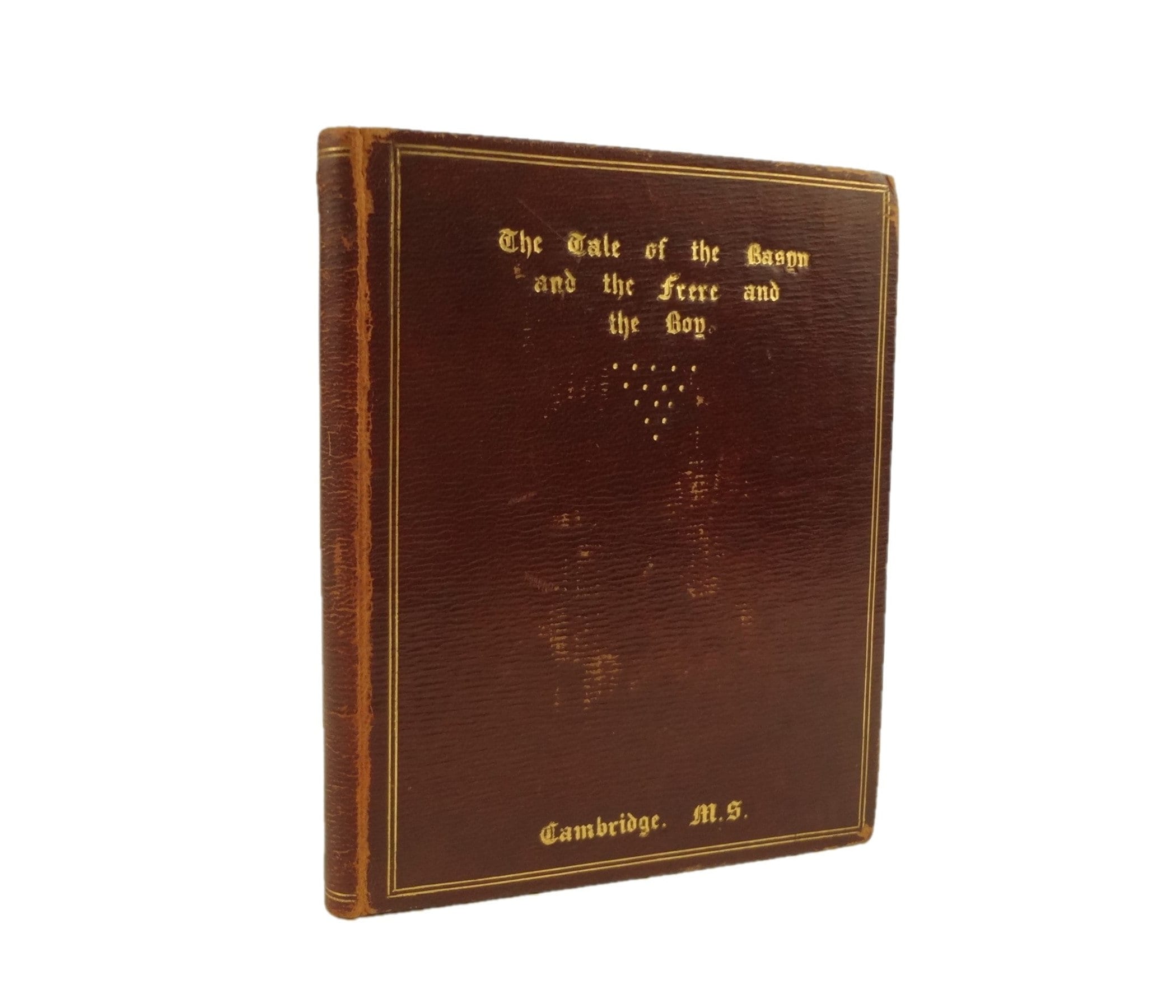 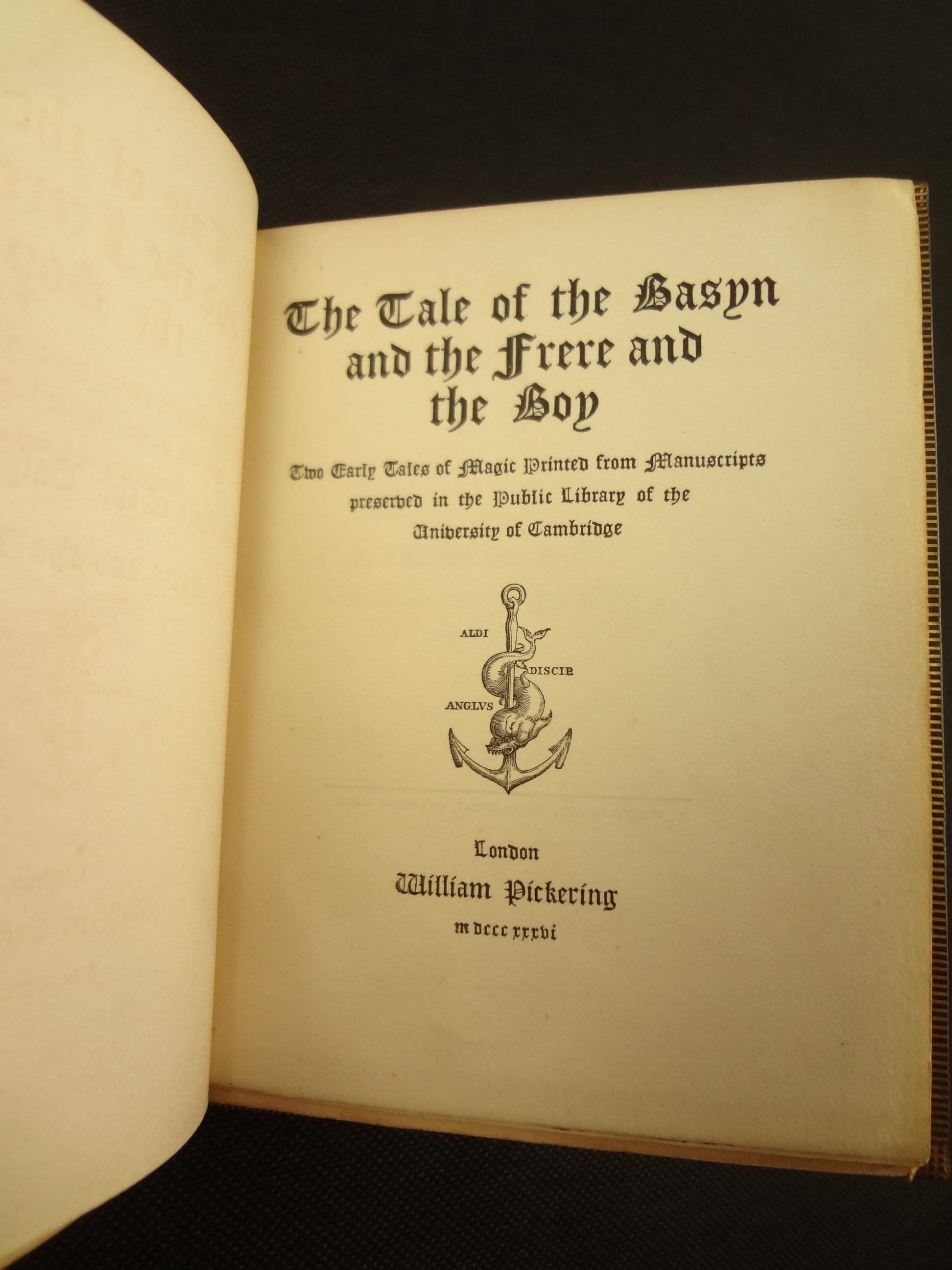 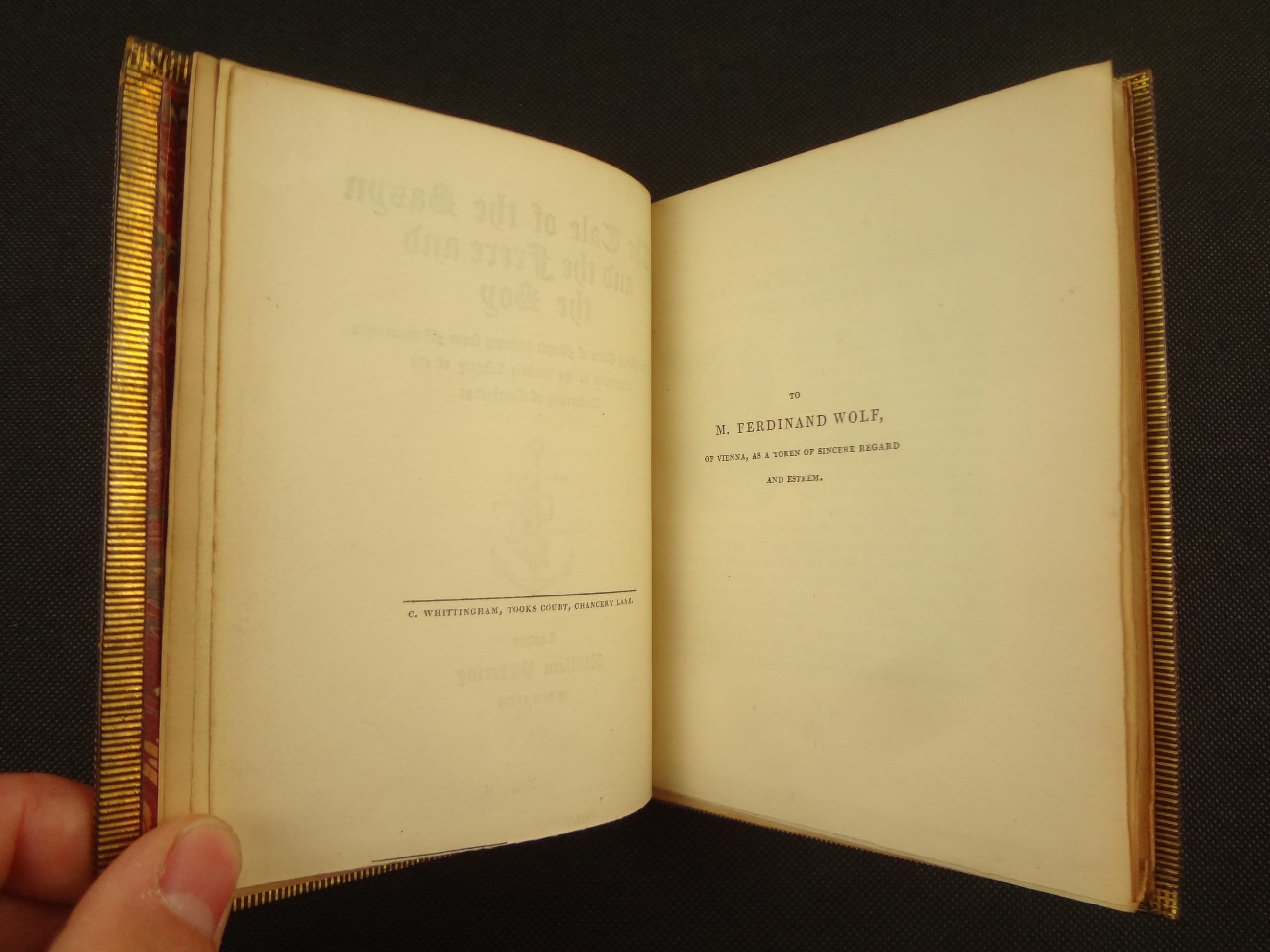 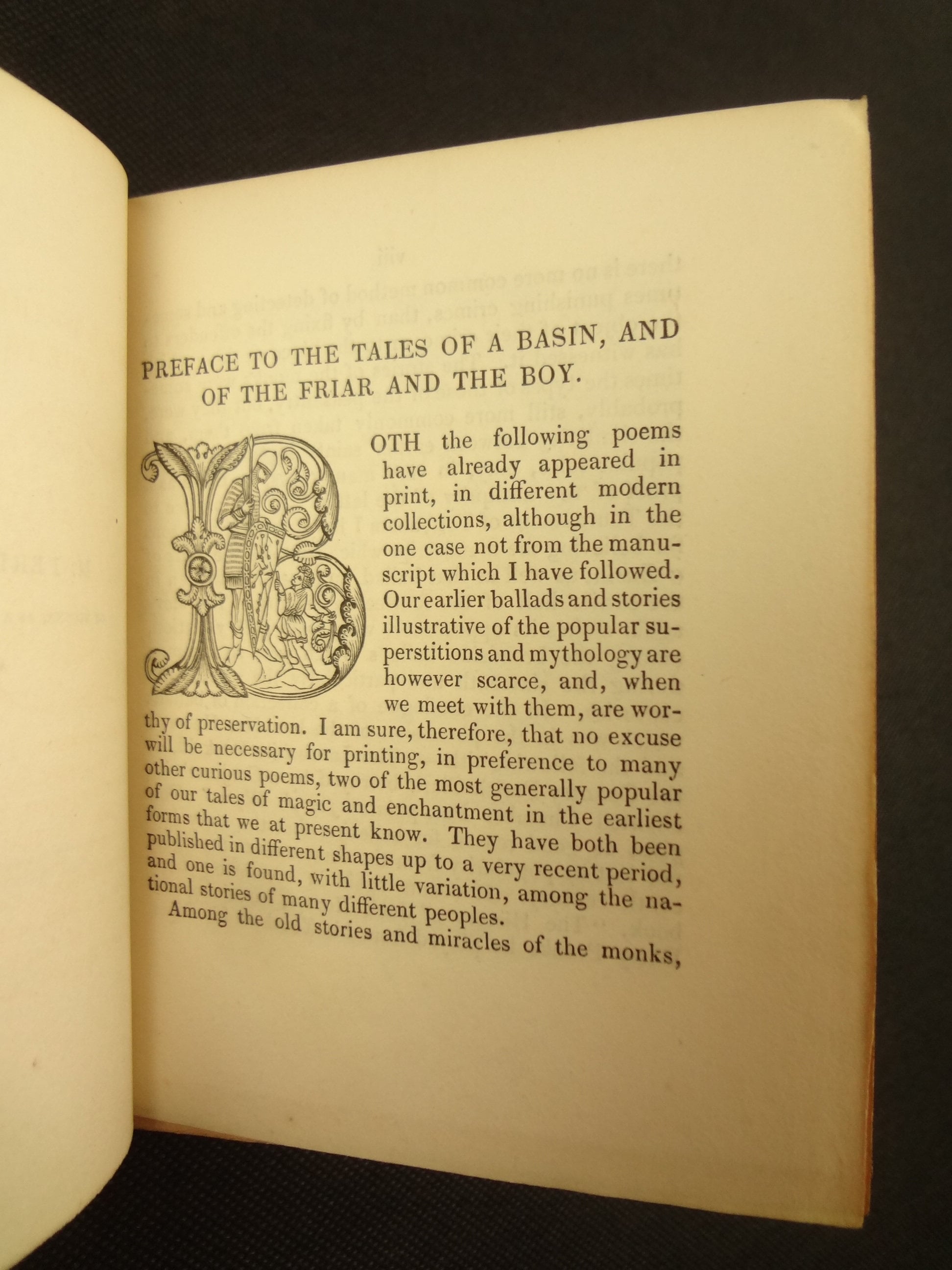 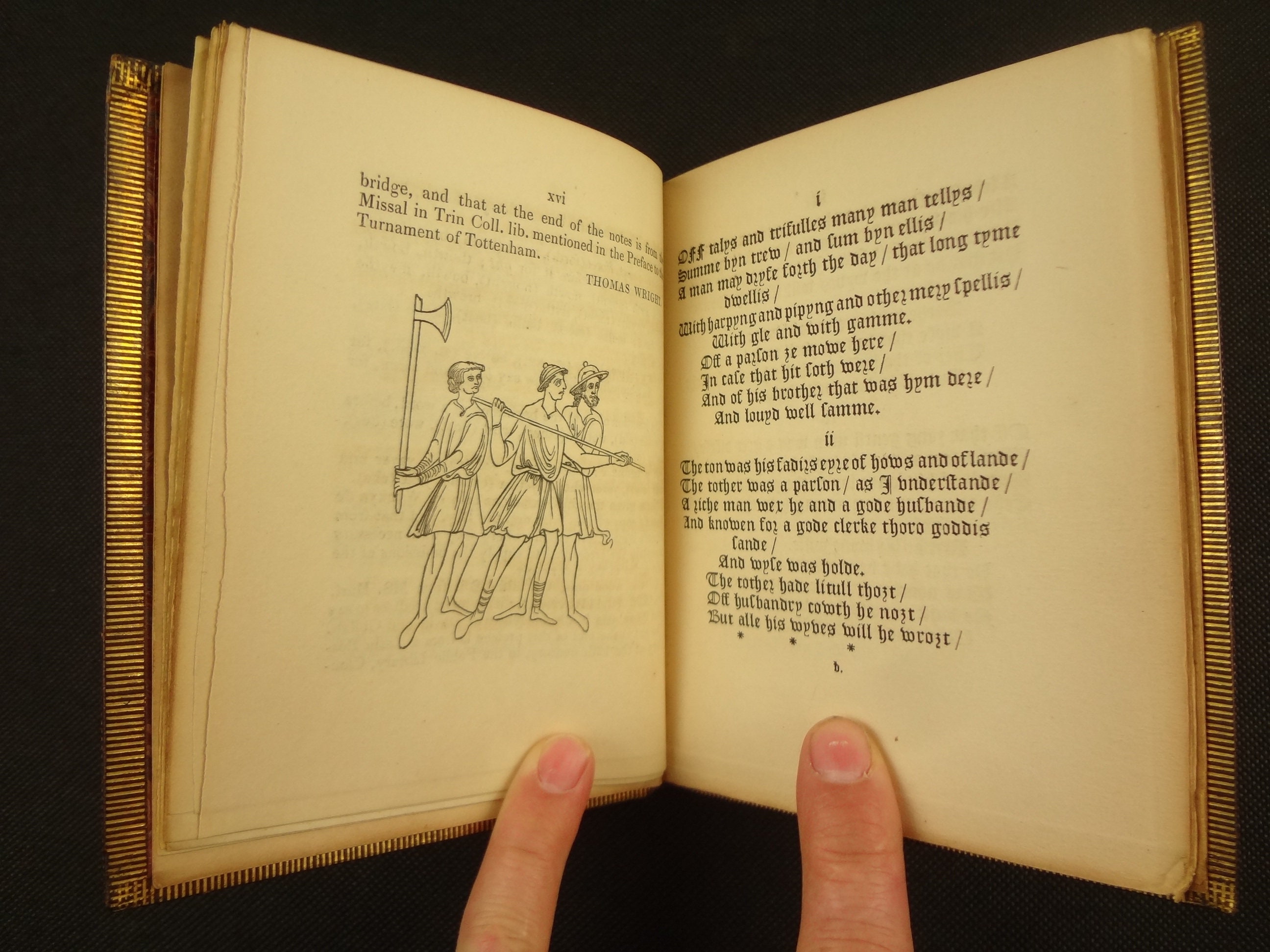 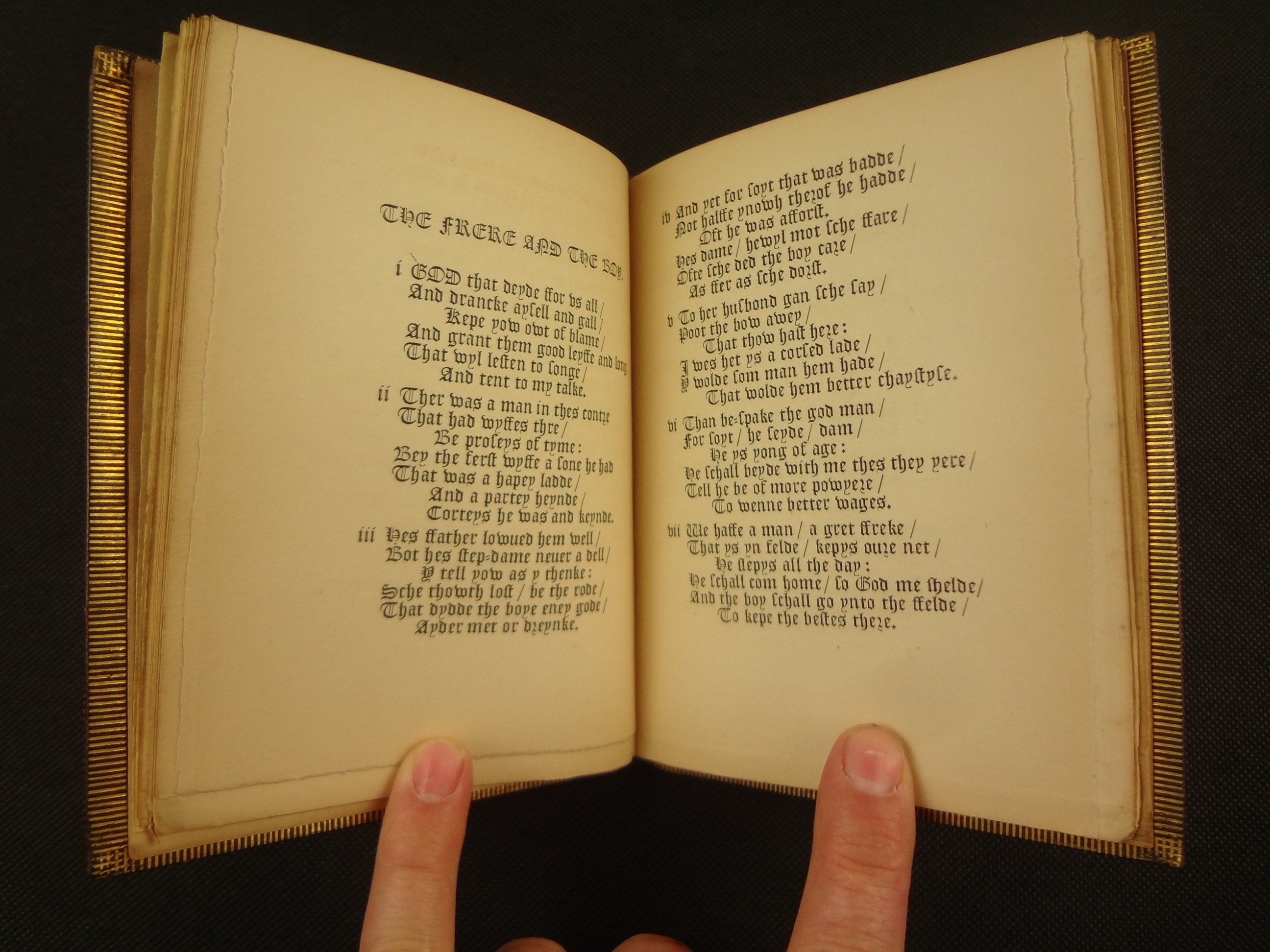 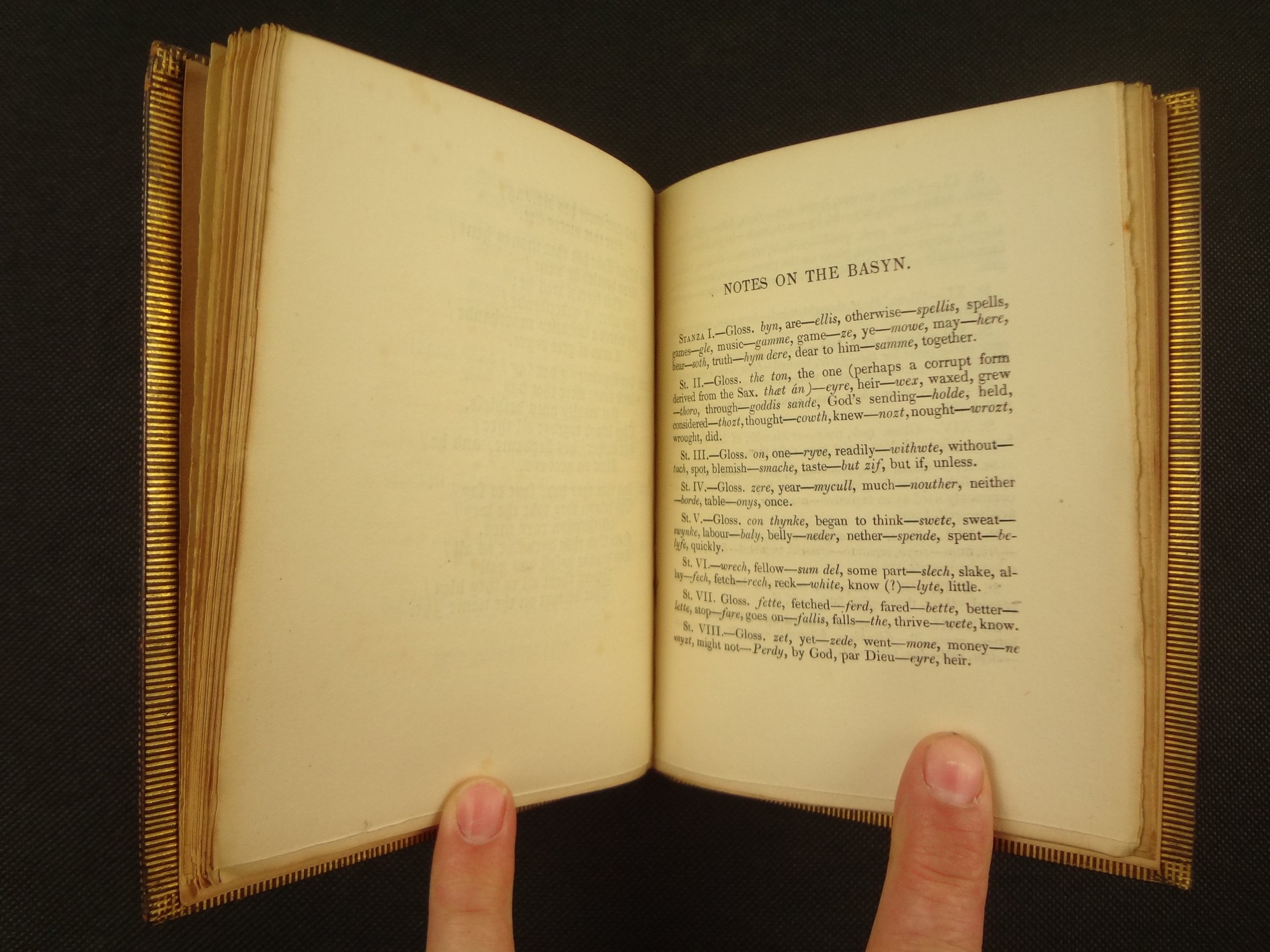 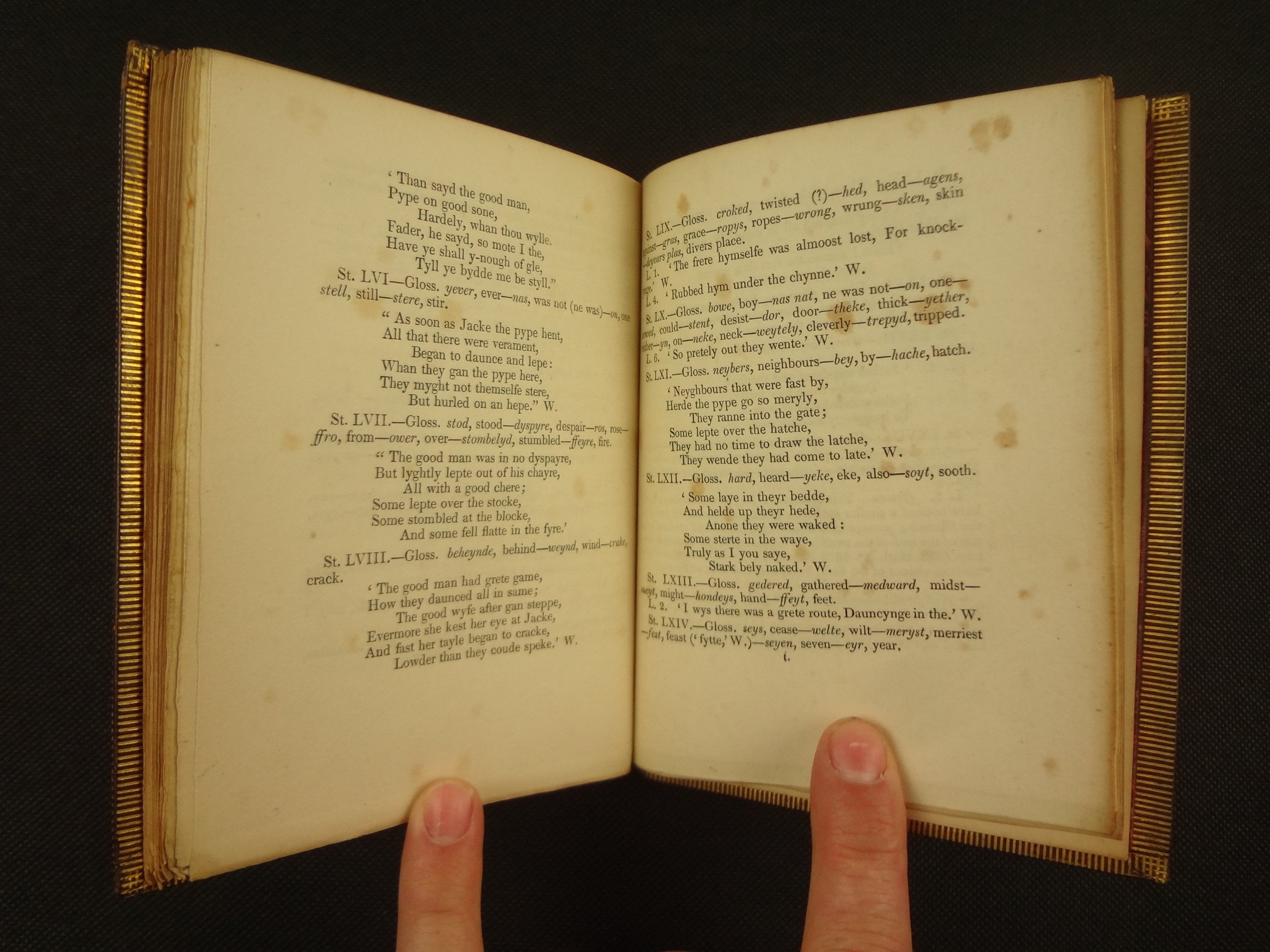 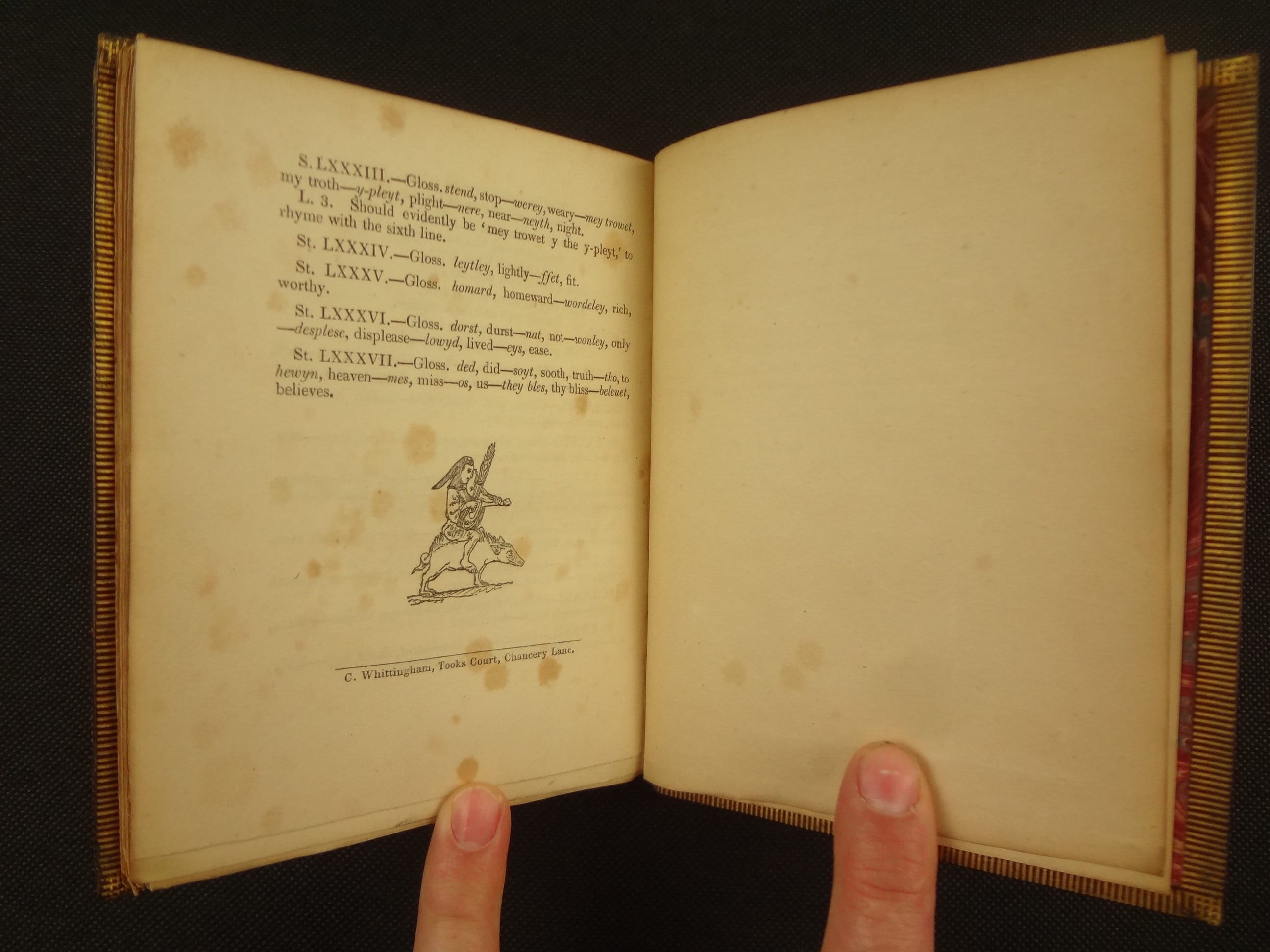 1836 The Tale of the Basyn and the Frere and the Boy. Pickering. Medieval tales.

A "scarce" work, an 1836 presentation, edited by Thomas Wright, of several moralistic medieval magic tales held in the Cambridge University Library, printed by the venerable Pickering. This copy notable for it's full crushed leather binding, noting that it's from Cambridge M.S. (manuscript), executed by Kerr & Richardson in Glasgow.

The editor, Thomas Wright, notes (in the introduction) that two others had presented this manuscript before him, but they had done so poorly. Well, stronger than that, he writes, "I ought to add that the Tale of a Basin has been printed by Mr. Hartshorne, in his Early Metrical Tales, but with its full share of the blunders by which that book is disfigured and rendered worse than useless. It had been previously printed by Jameson, with about equal accuracy."

From the University of Rochester's Middle English Team -

"A brief poem, The Tale of the Basin presents few clues as to date and origins, let alone poet. Since the manuscript is late fifteenth-century, the poem can be no later. The poem likely belongs to the North or north Midlands area, as demonstrated by the rhymes wyfe/stryfe/fyfe at lines 220–22. Forms of five with –f(f)(e) are found in those areas (LALME Q126). This localization is compatible with the third person singular verb ending –ys (–is) seen in rhyme in lines 1–4 (tellys/ellis/dwellis/spellis; LALME Q59). The form “thou may,” in rhyme at lines 148–50 (fay/may/awey), suggests a northern origin, though if the poet is from the North, it is surprising that far from treating descendants of Old English long a as rhymes with long a from other sources, he rhymes them instead with long close o."

From the Cambridge Companion to Children's Literature -

"The Friar and the Boy, first printed about 1510 though circulating in manuscript beforehand, has sometimes been called perhaps the first story appealing directly to children, because of it's account of a boy's use of a magic amulet to make his cruel step-mother fart uncontrollably."

See pictures. General wear, including edge, joint and corner rubbing, as well as a few rubs on the boards. 1 cm crack start at top of front joint. The hinges don't appear cracked and the binding isn't fragile. Pencil bookseller note ("...scarce and a few copies printed") on verso of flyleaf, and a binders stamp (Kerr & Richardson, Glasgow). Intermittent foxing throughout, more at rear. Pages a little toned. Occasional thumbing. The very tip of the top-right corner seems bumped. I don't see any tears or writing in the text block.