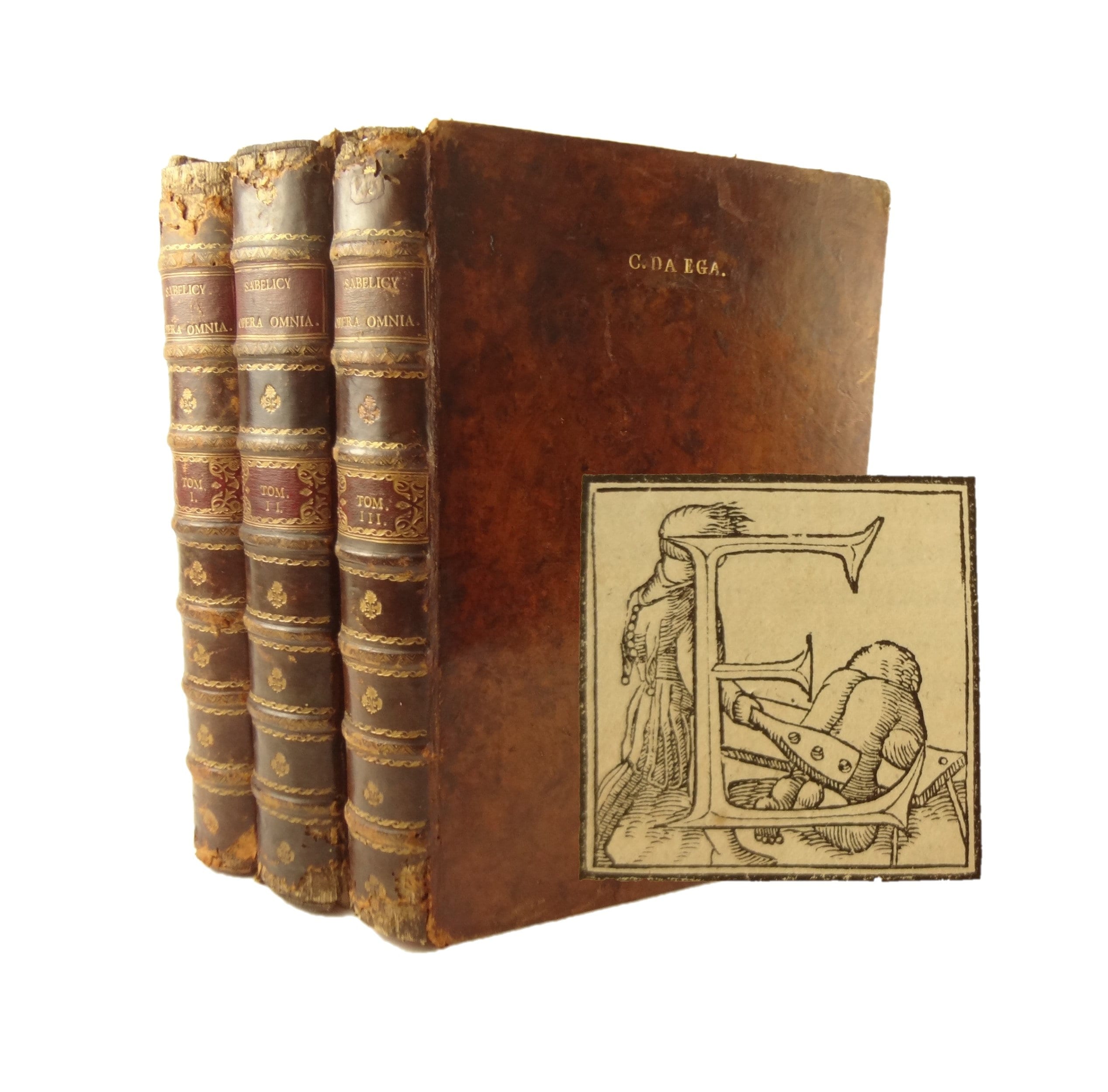 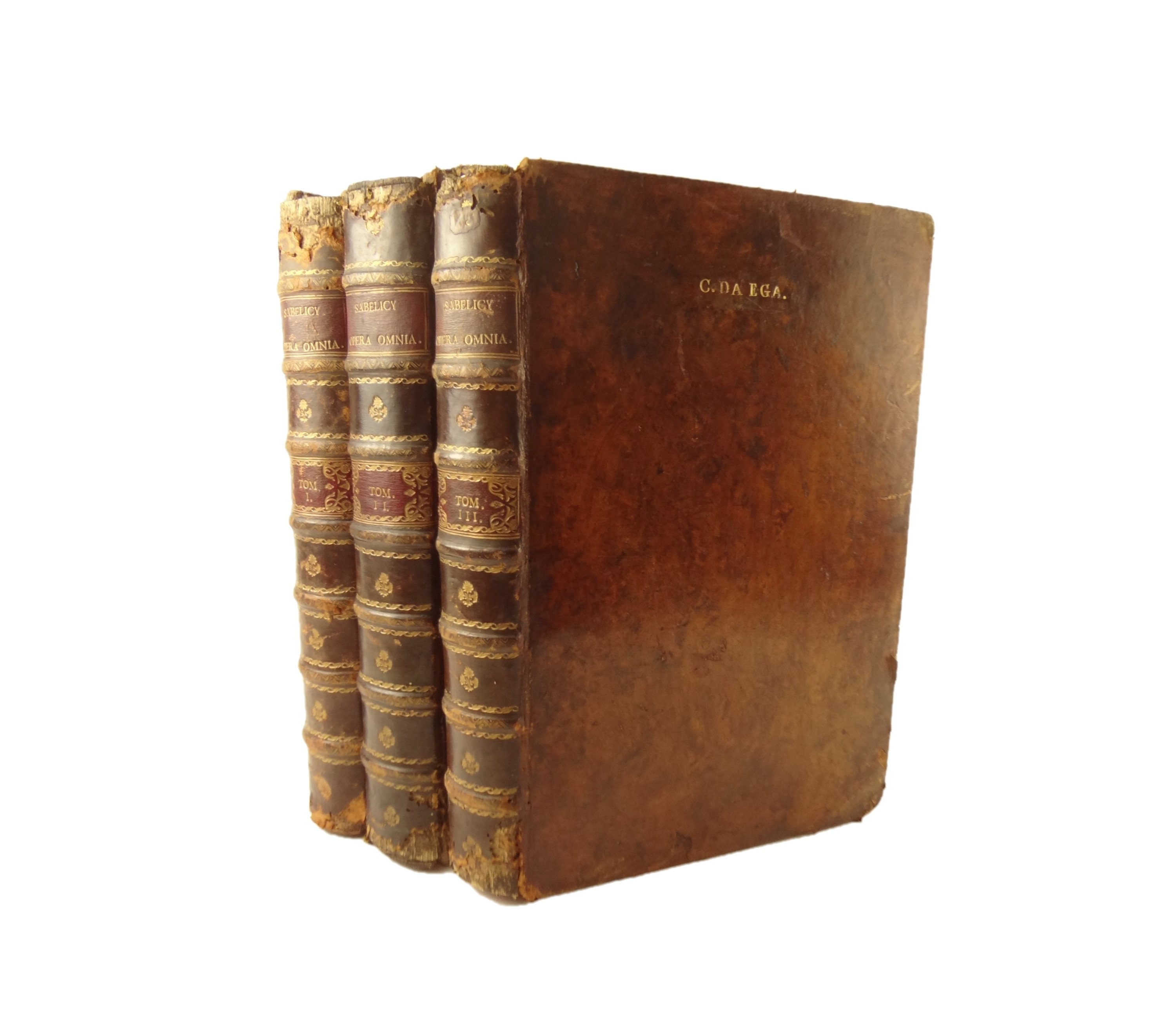 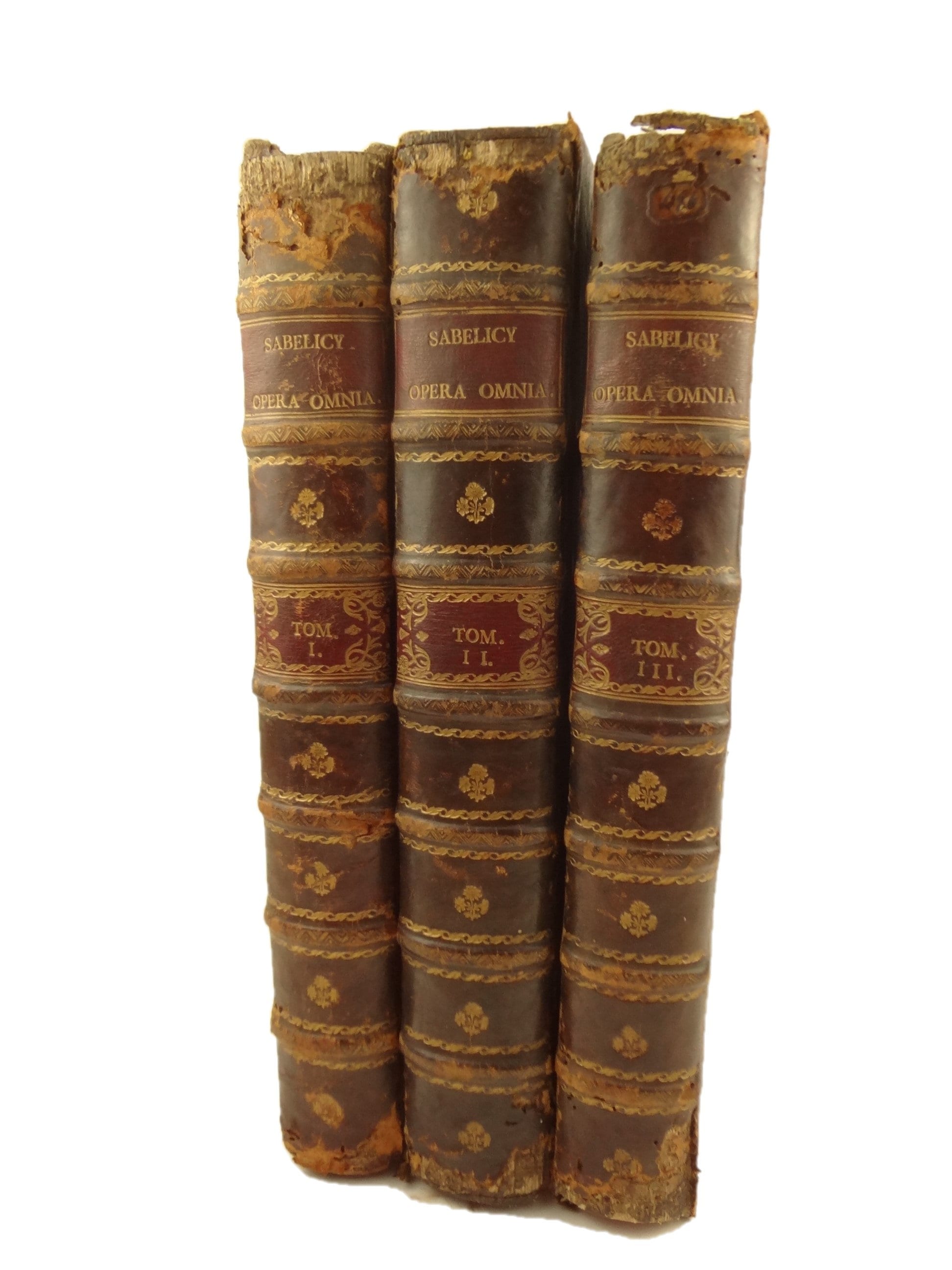 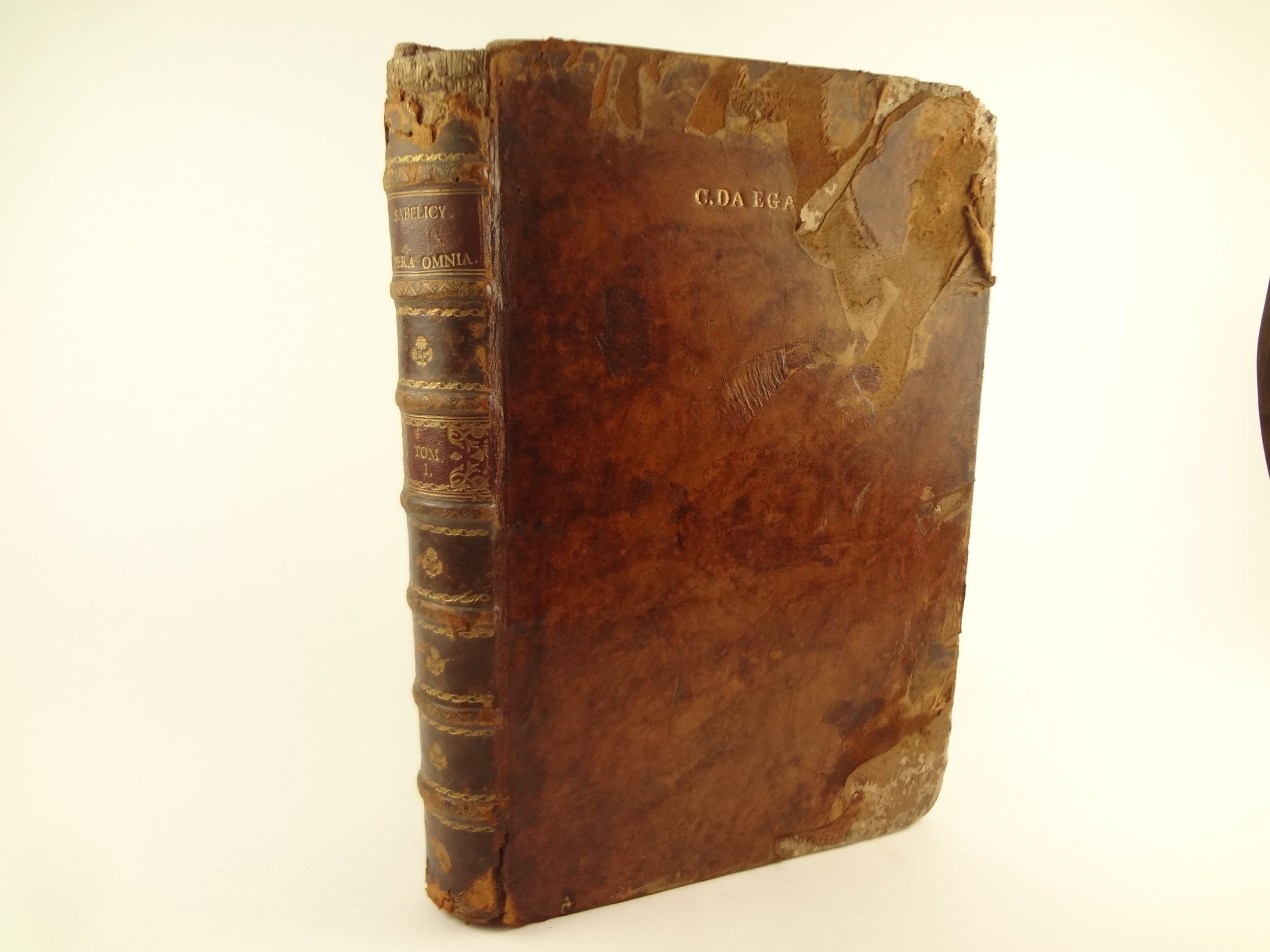 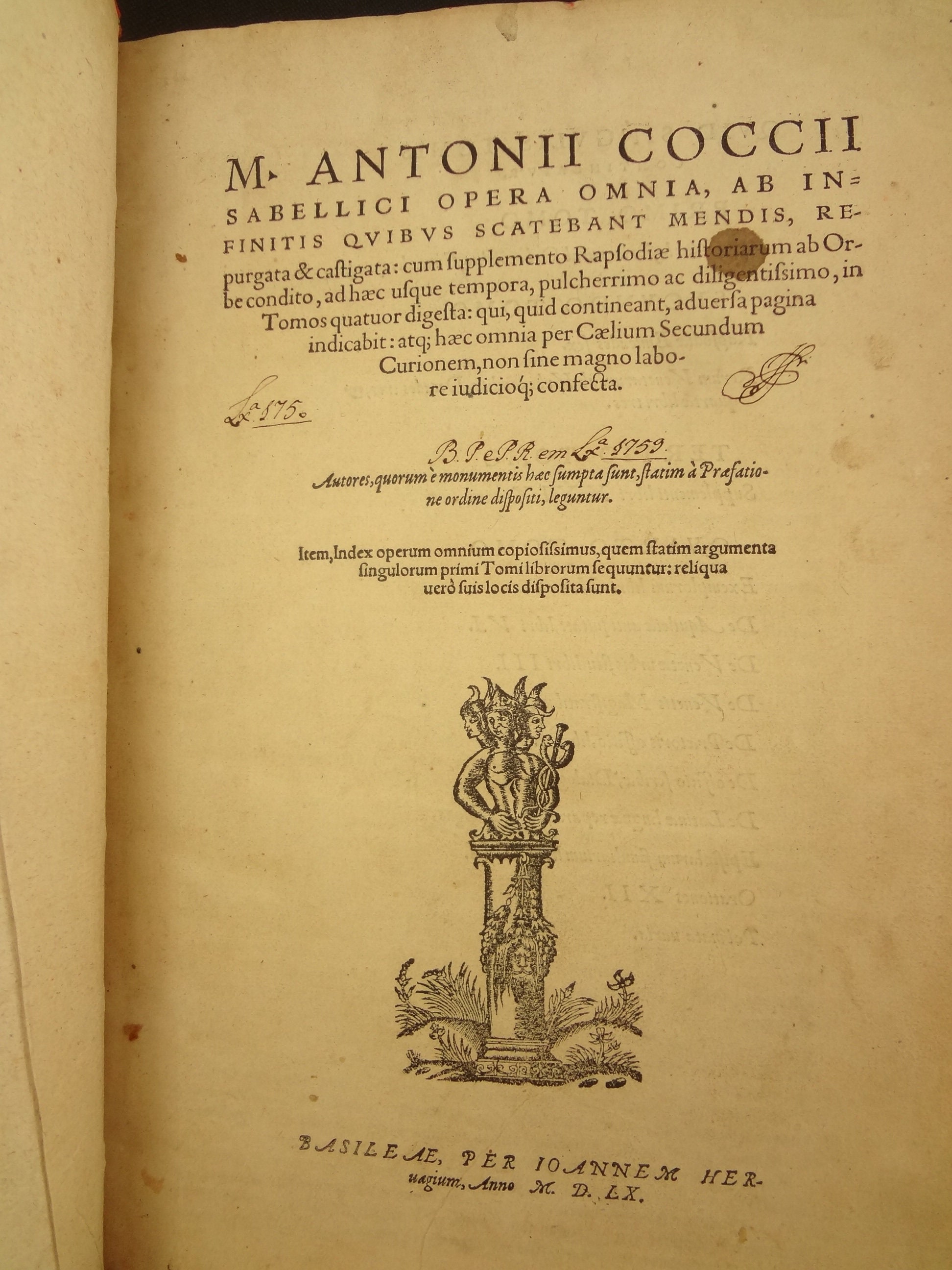 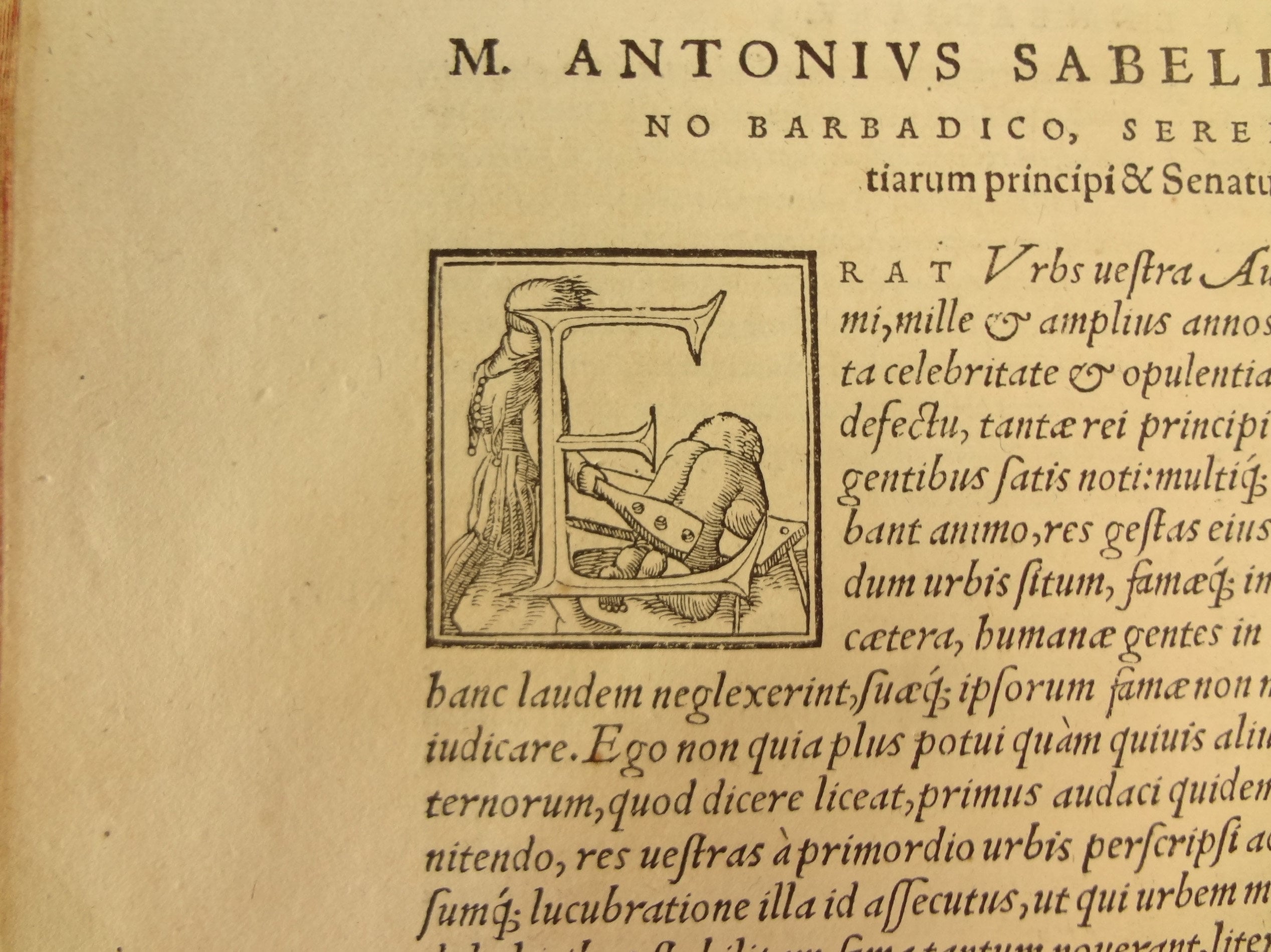 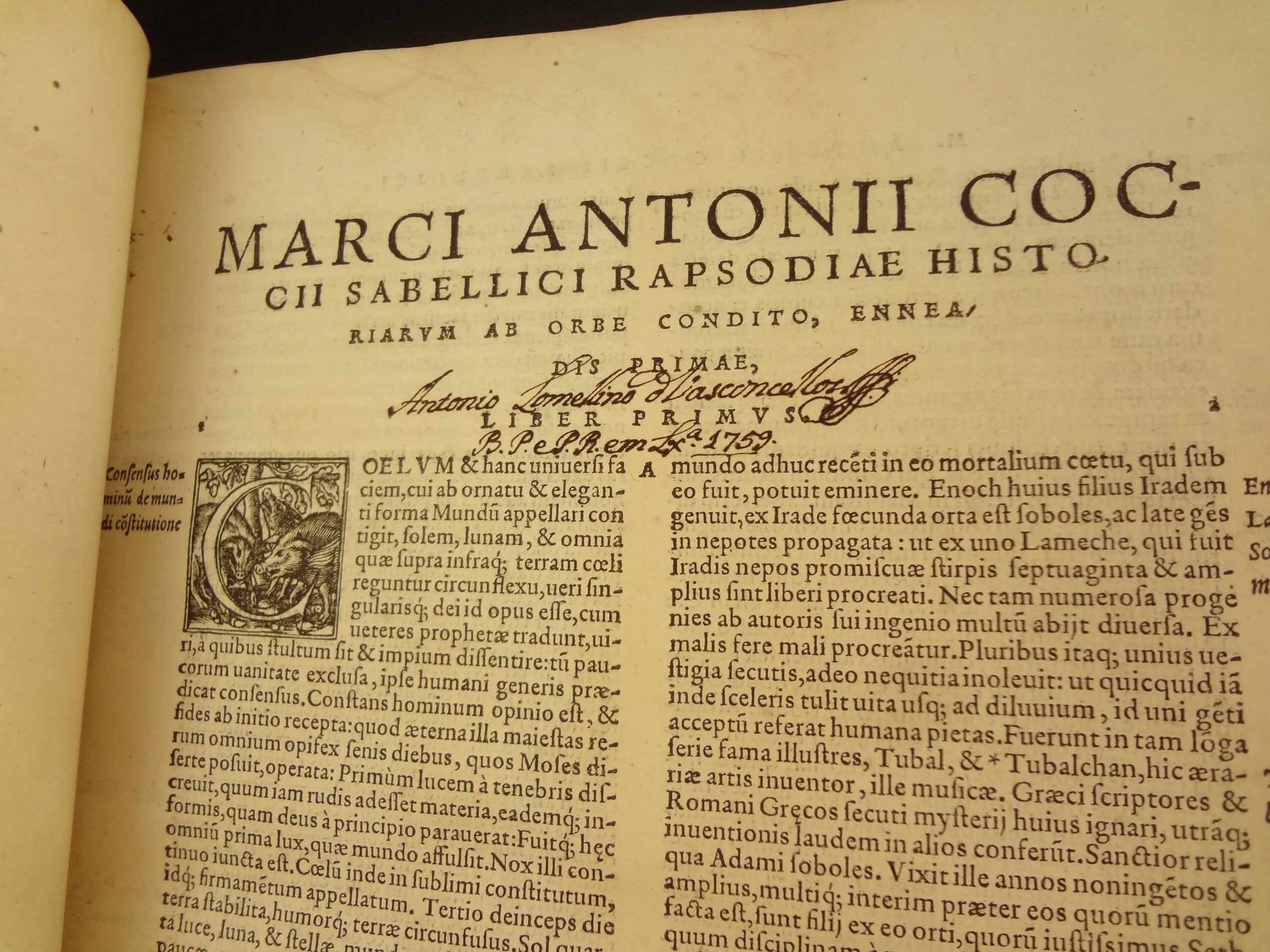 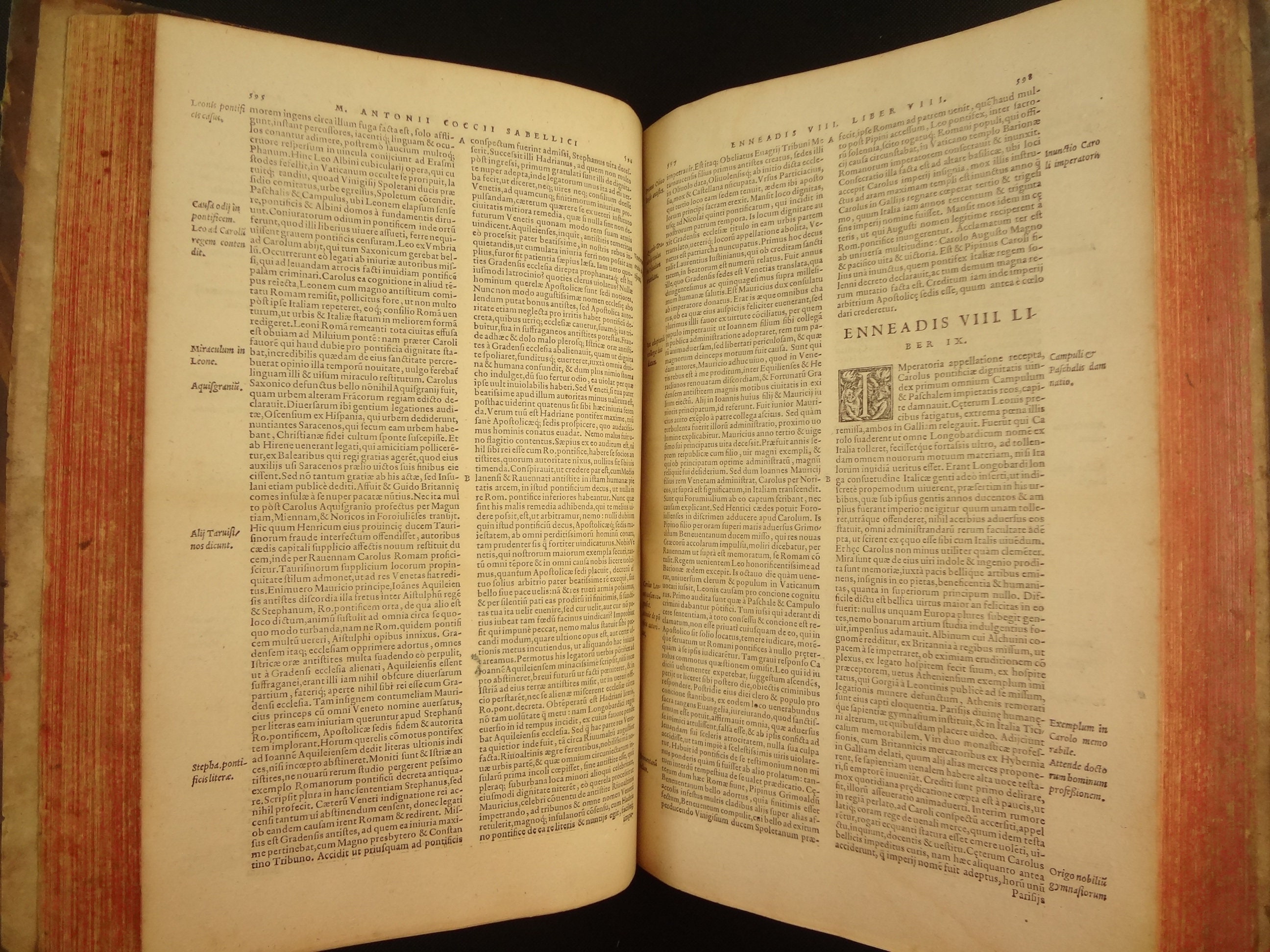 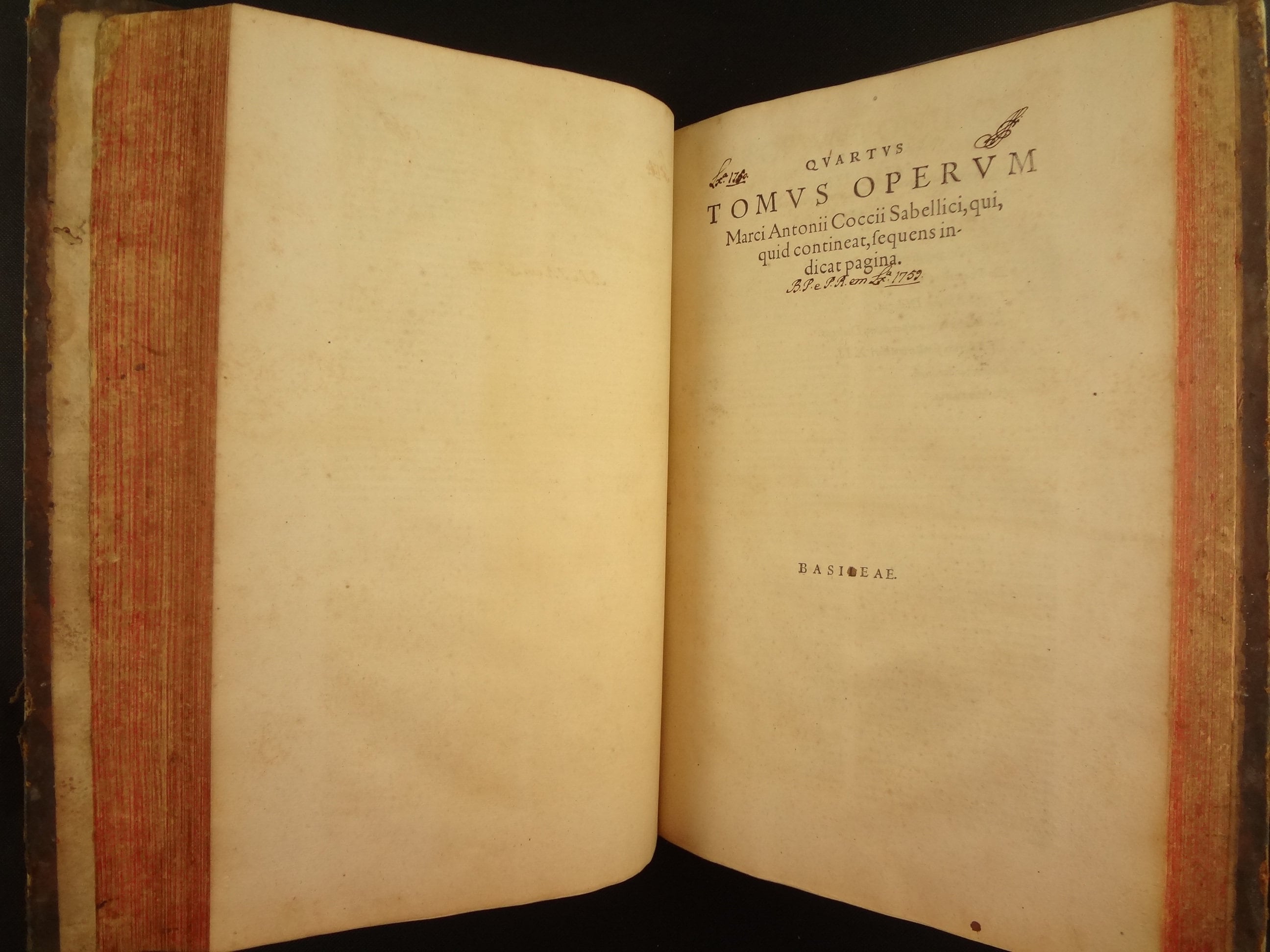 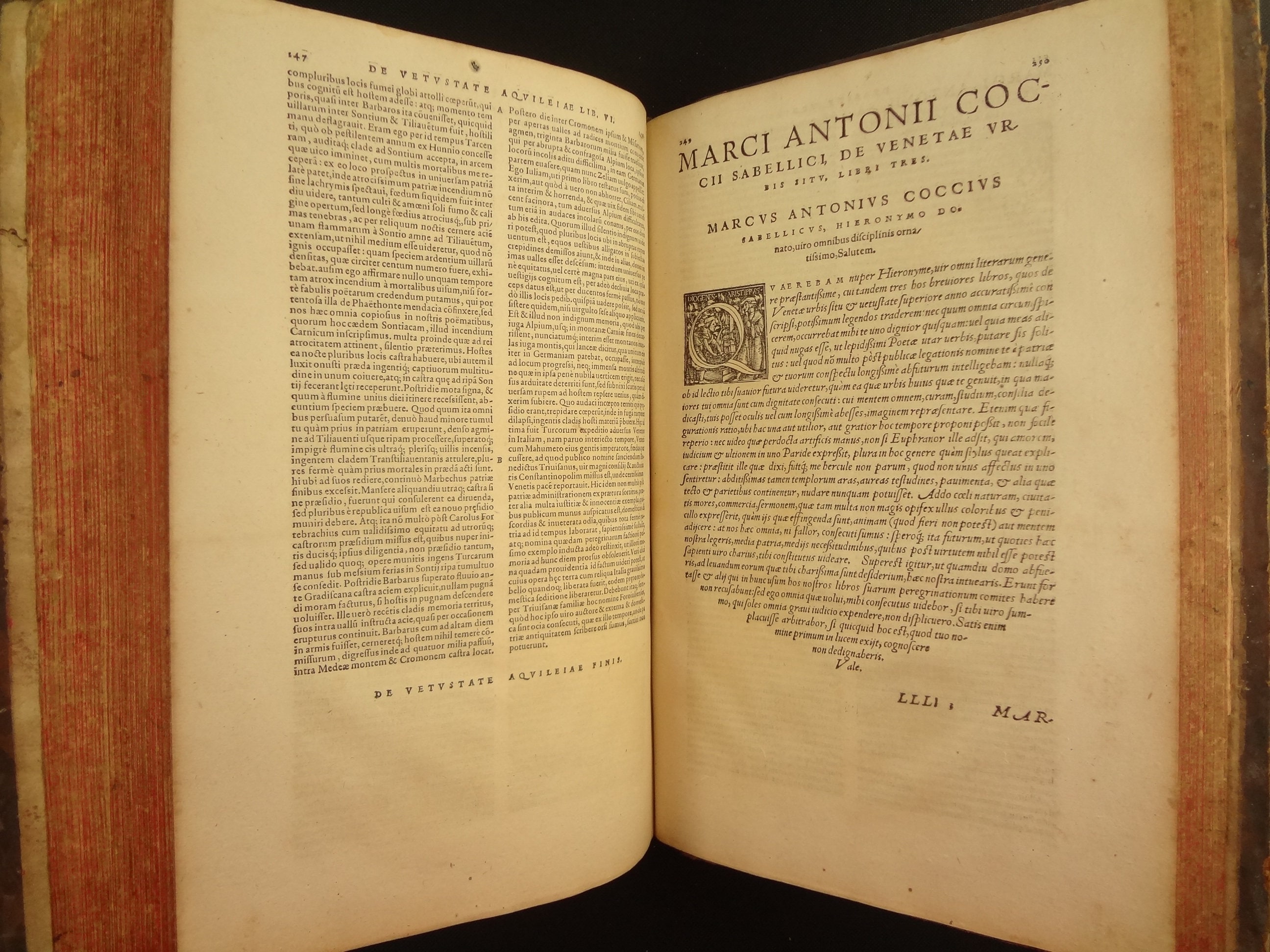 The recognized first edition of the collected works of Marcus Antonius Coccius Sabellicus, edited by Celio Secondo Curione, complete in four books (bound in three volumes), with the provenance stamp of the Count de Ega decorating each board (and more provenance within).

An earlier "opera" (1538) was published, but lacked much of Sabellicus' work. The noted scholar Celio Secondo Curione gathered, and edited this work, published in Basel, Switzerland, at the printing house of Hervagius.

Sabellicus (1436-1506) was a scholar and historian of Venice, best known for his universal history, Enneades sive Rhapsodia historiarum. Early in his career he wrote a history of Venice, which led to him being given a teaching position in the city. In 1487 he was appointed curator of the Biblioteca Marciana (National Library of St. Mark) and began preparing for the eventual historic library building next to the Doge's Palace.

A well-regarded grammarian, editor, historian and humanist who spent many years exiled from Italy in Switzerland (Basel).

Antonio Lomelino de Vasconcelos placed his name and date (1759) on many of the title pages, colophons, etc. throughout the three volumes. He was a scholar, who became the Regius Professor of Latin Grammar in 1771 (which probably explains why most the notes correct Latin words).

"(He) is said to have been a curious and diligent bibliophile. This important bookstore later passed to the Count of Ega, Aires de Saldanha, and by the sequestration that was made in 1808 to the estate of this nobleman, was sold in public to different buyers" - 1904 to 1915 Portugal Historical Corographic Heraldic... Dictionary, Volume VII, p. 317.

The front boards of these bindings still bear the stamp of "C. de Ega.". Based on dating, the second Comte de Ega. His estate was sequestered because in 1808 he joined Napoleon's camp in France.

Each book measures approx. 36 x 24 x 4.5 cm, folio. Three volumes holding four books (each with their own pagination). 18th century leather bindings, with the stamp of "C. DA EGA" in gilt on each board. Seven raised bands to the spines, with a central gilt floret in six compartments, and the author, title and tome in gilt on red morocco in the other two. Edges painted red. Text in two columns with some inhabited and decorated initials, headbands and tailpieces. Printer's device on volume 1 title page.

See pictures. Vintage patina, with a pleasing look of history. Bindings are well worn, with edge wear, corner bumps, rubbing, chipping at spine ends, etc.. Volume one has some pealing of the leather (in pictures). Some hinges cracked, a few joints starting.

All volumes have some toning, occasional spots/dog ear/foxing, occasional worming in bottom margin, and name/date on the title page/at the colophon and etc.. V.1 - Ex libris ticket on pastedown, also bookseller notes on pastedown and flyleaf. Inkspot on the title page, 3 cm, and another 1 cm that has turned into a hole. Several fore-edge chip repairs. V. 2 - shared condition notes, nothing exceptional to it. V. 3 Title page has some creasing. All volumes have a very occasional underline and marginal note; there are not many, most only correcting the Latin. Despite the condition notes, these books present themselves well and add presence to a shelf with their tall classically decorated spines.