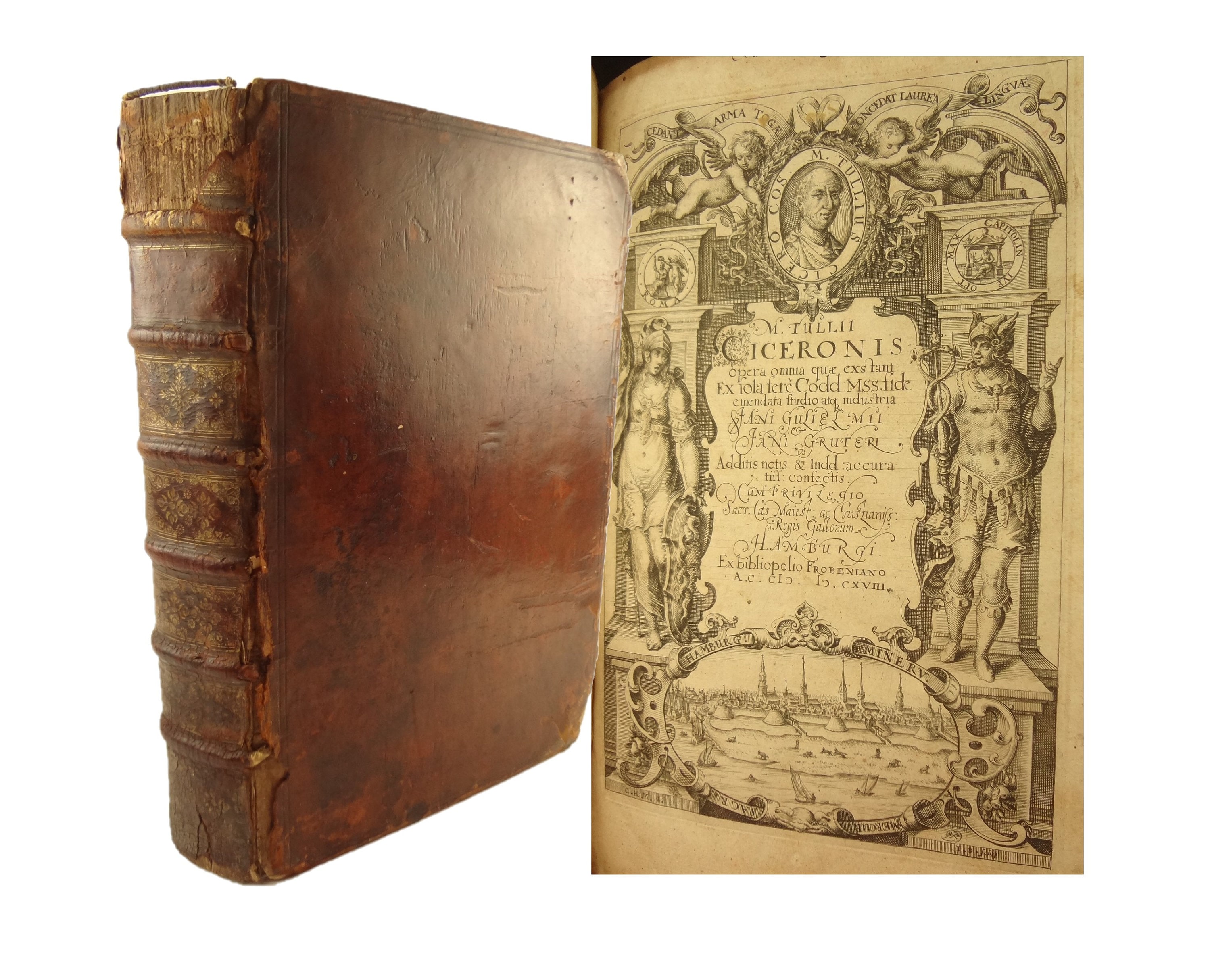 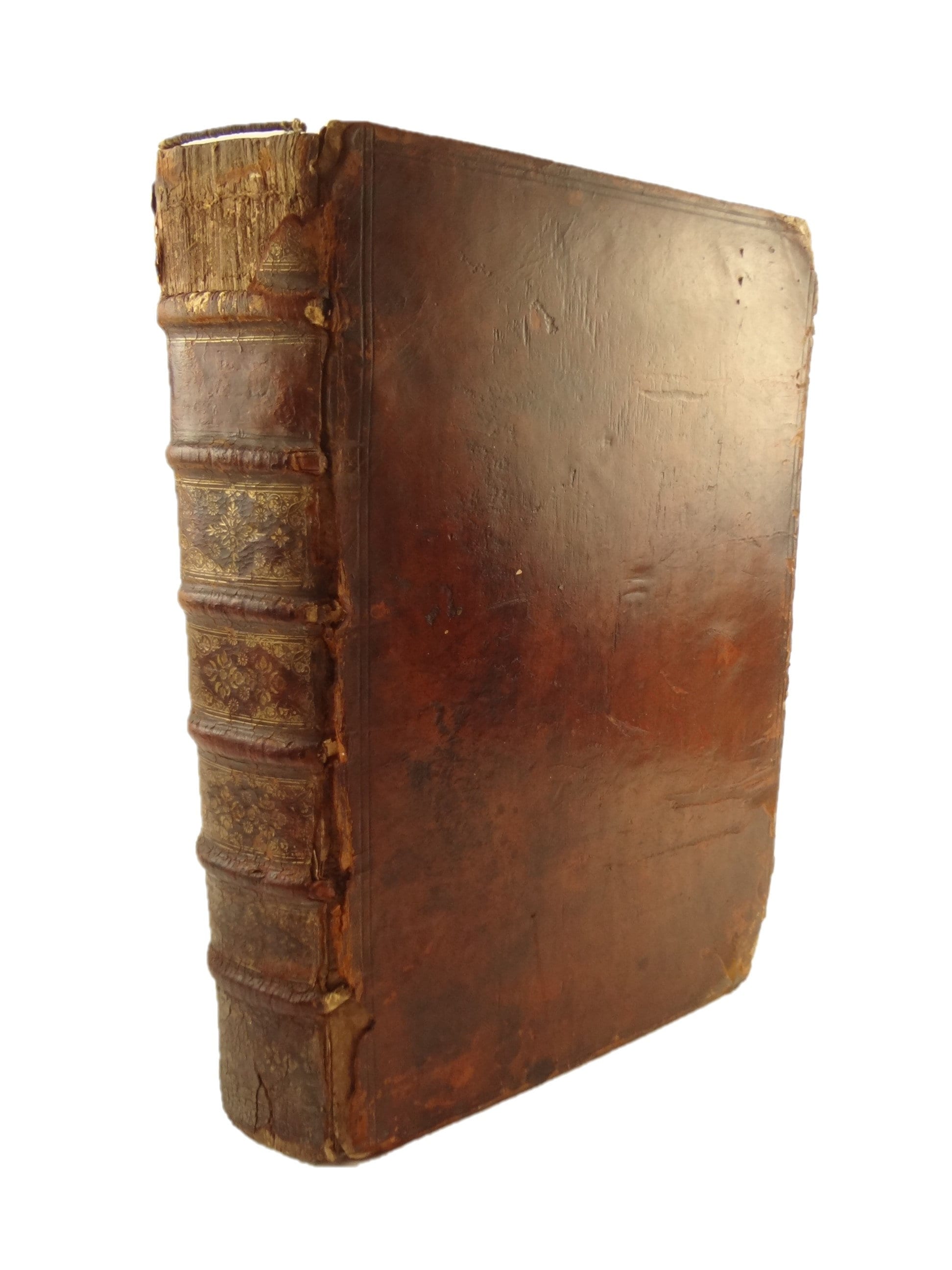 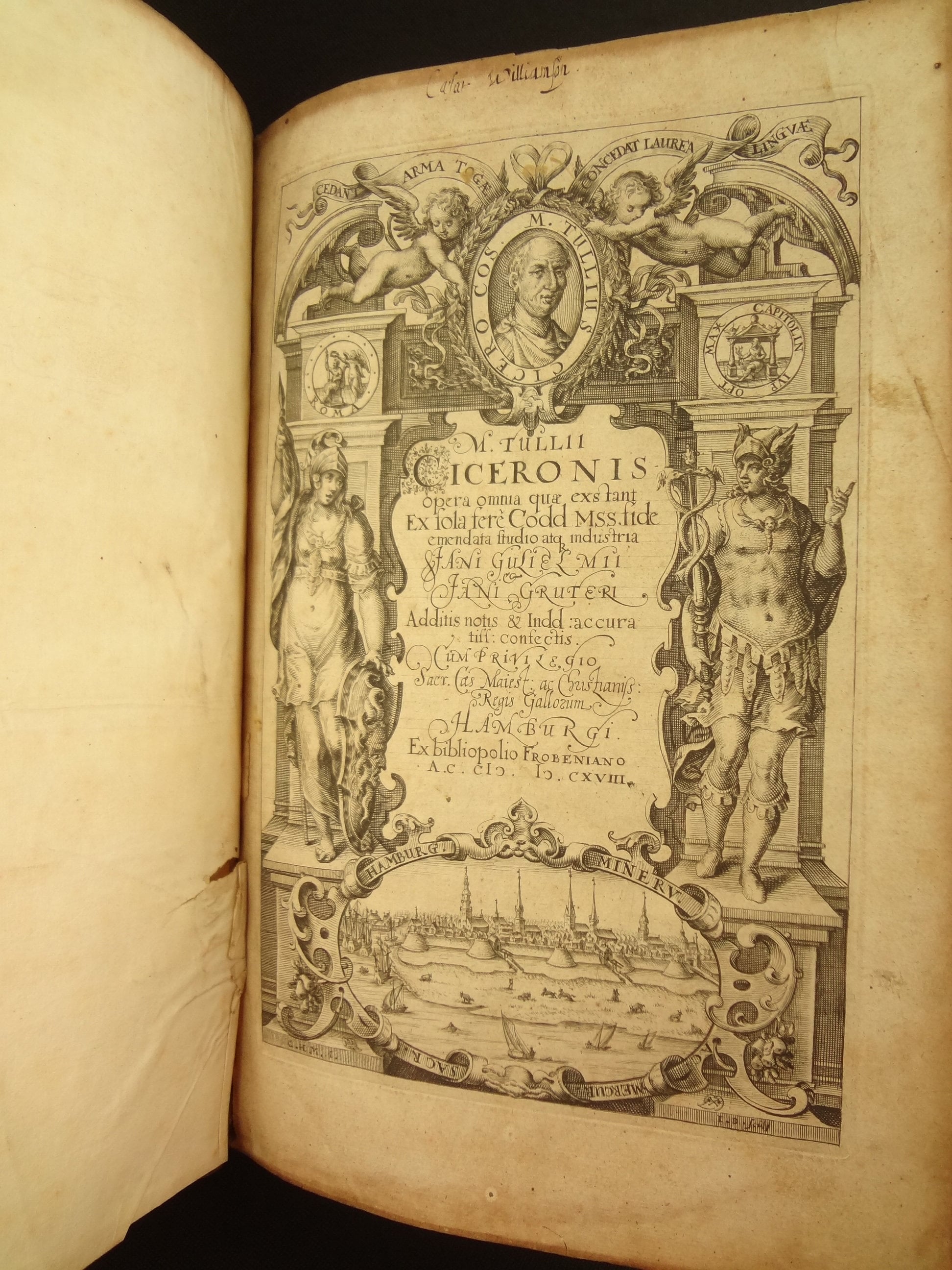 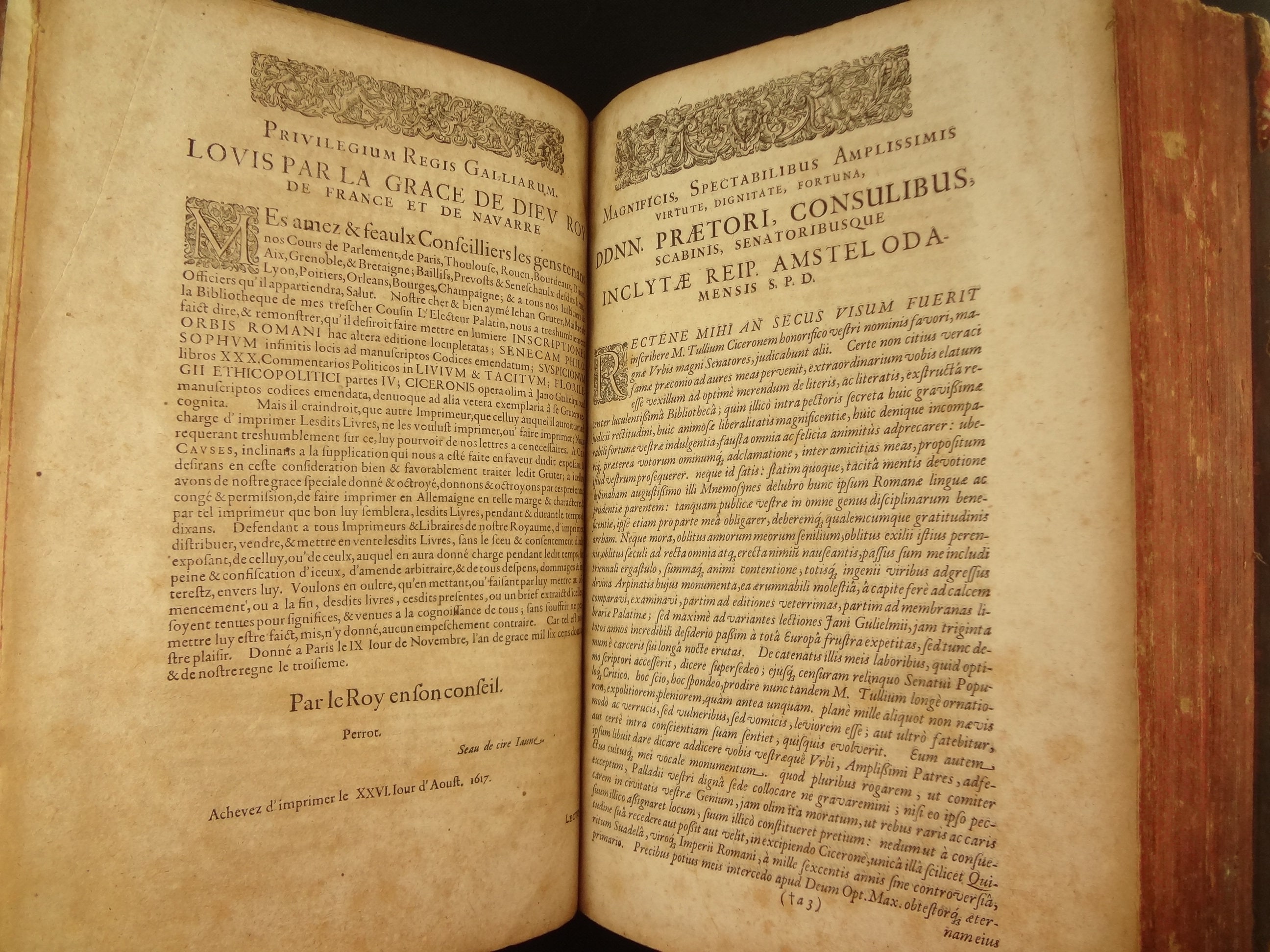 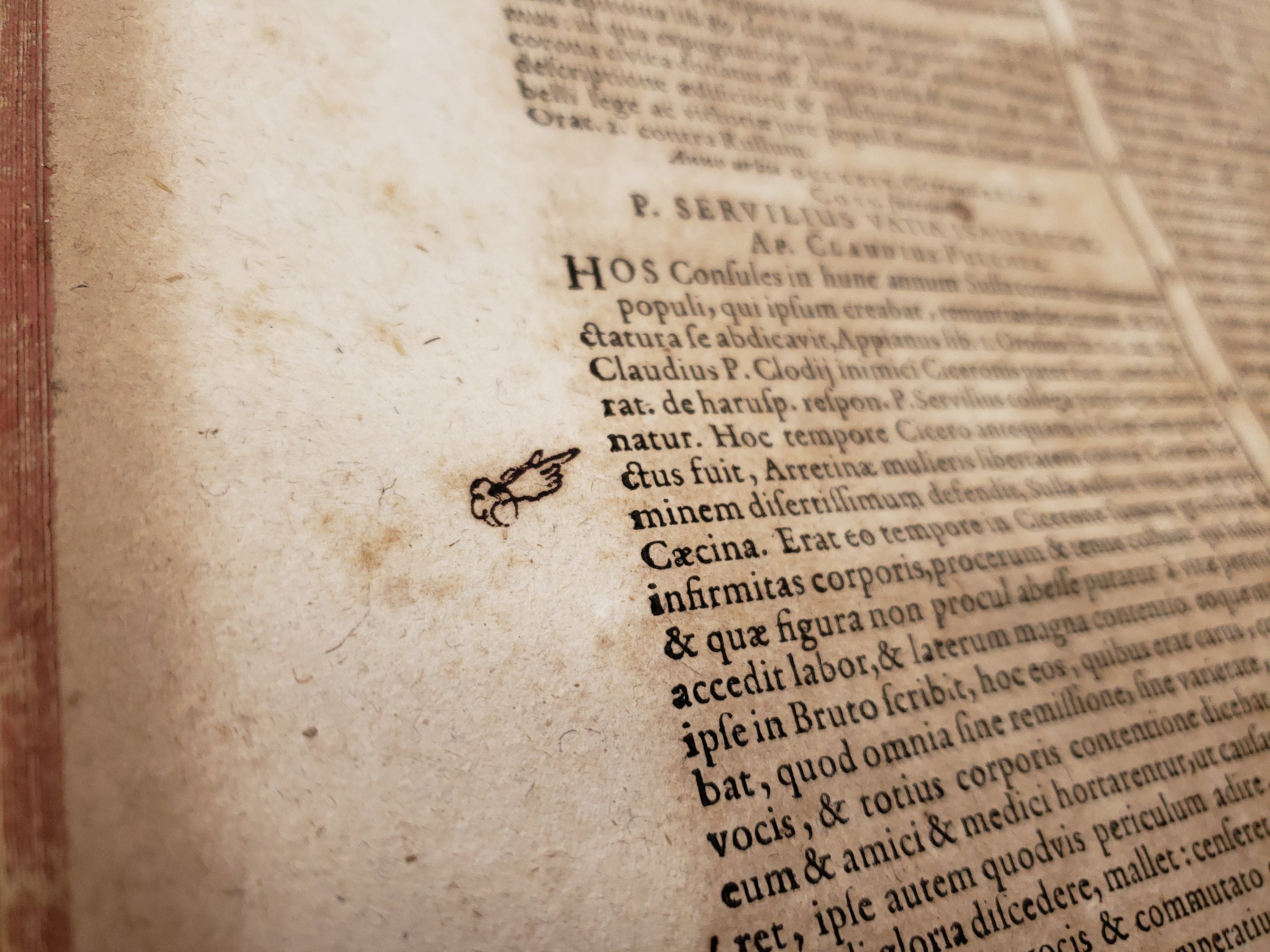 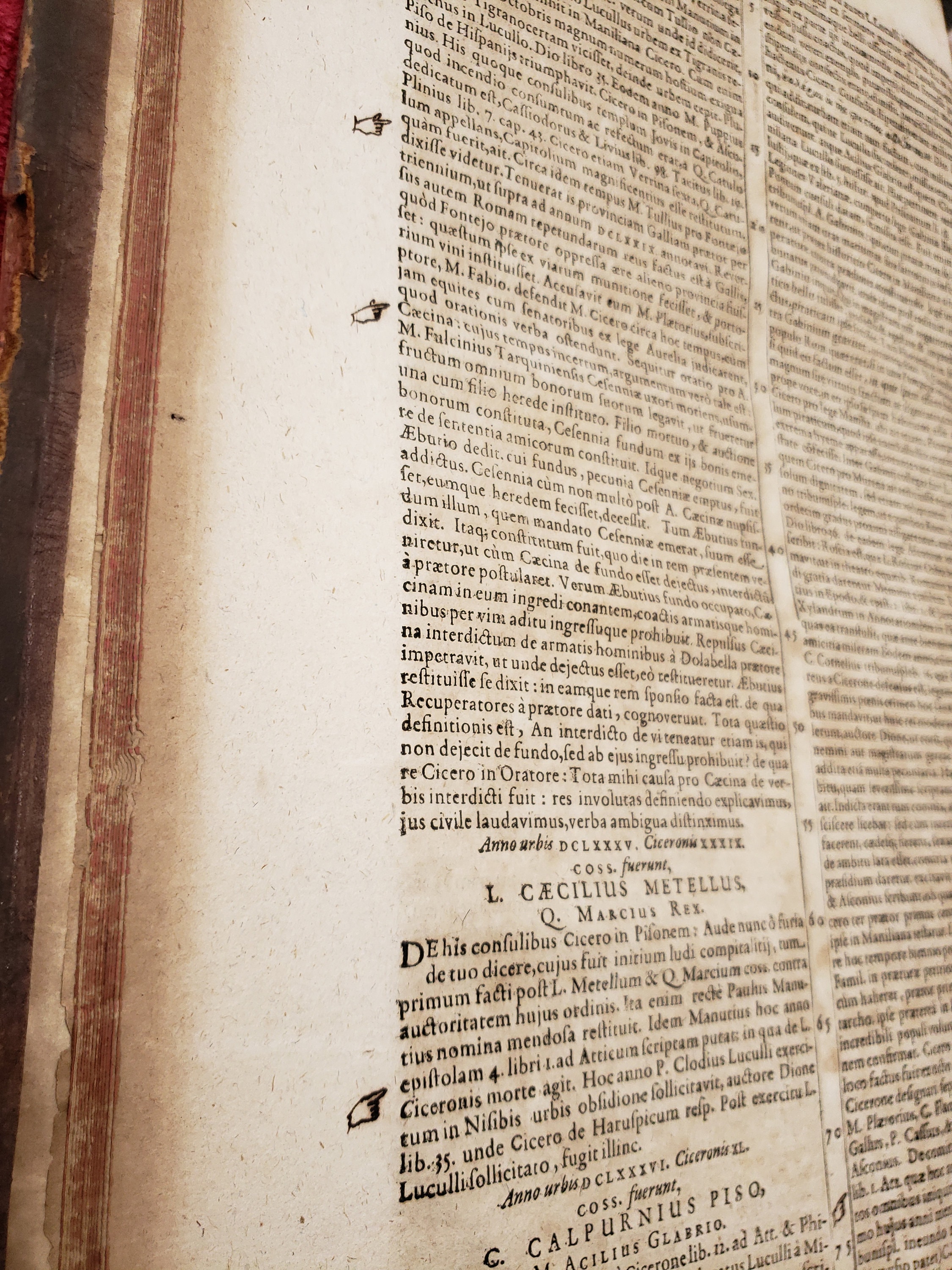 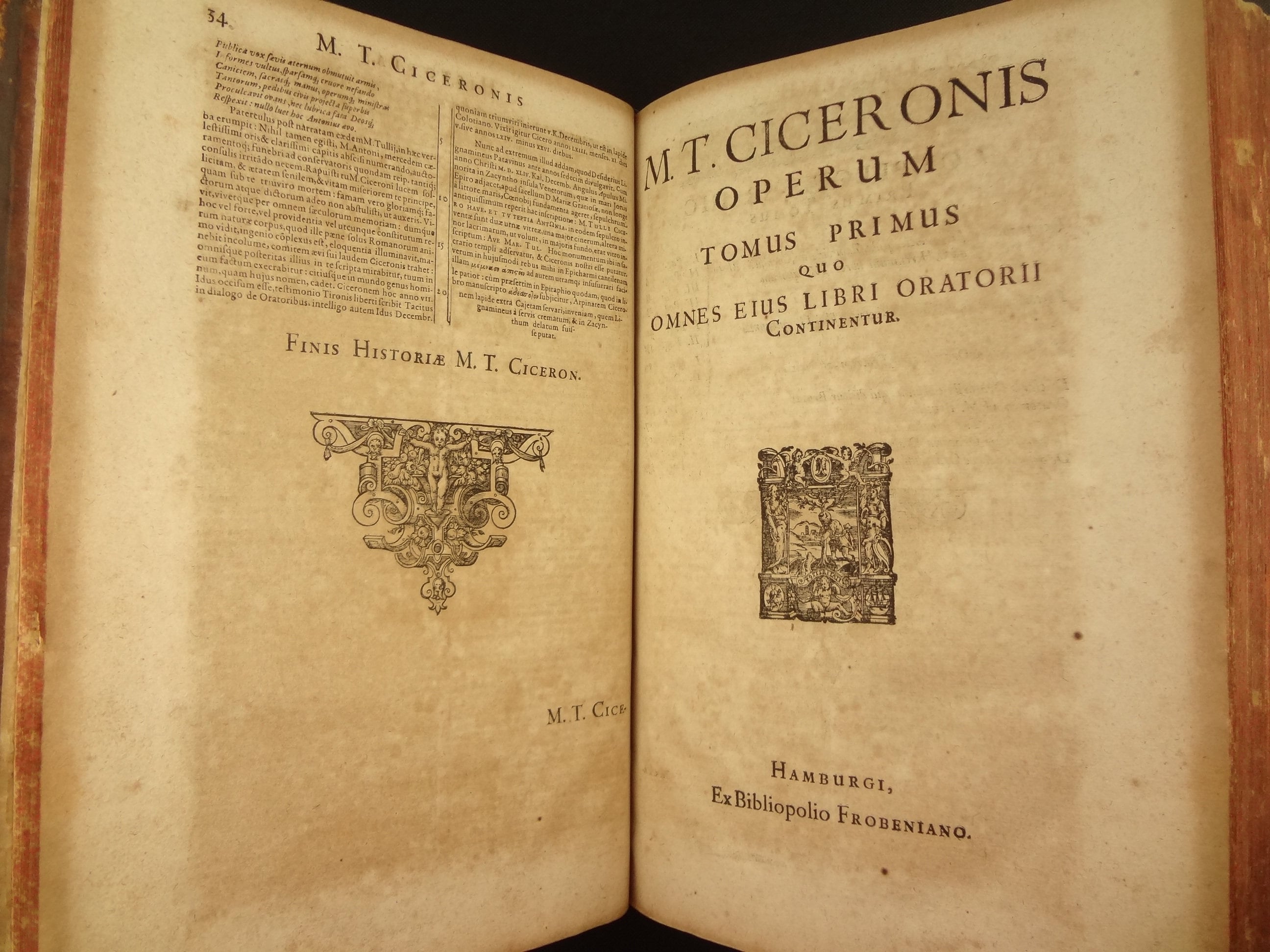 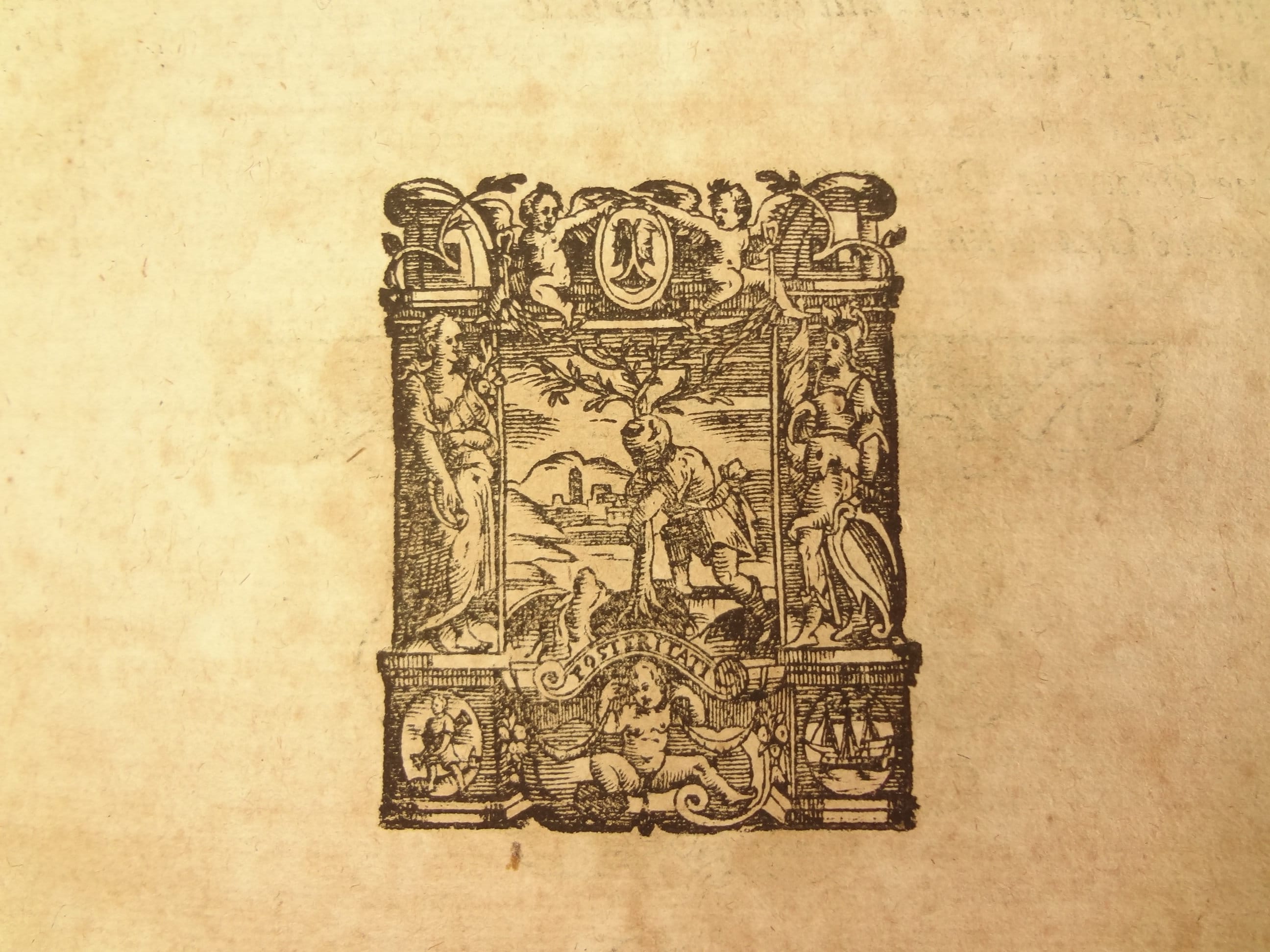 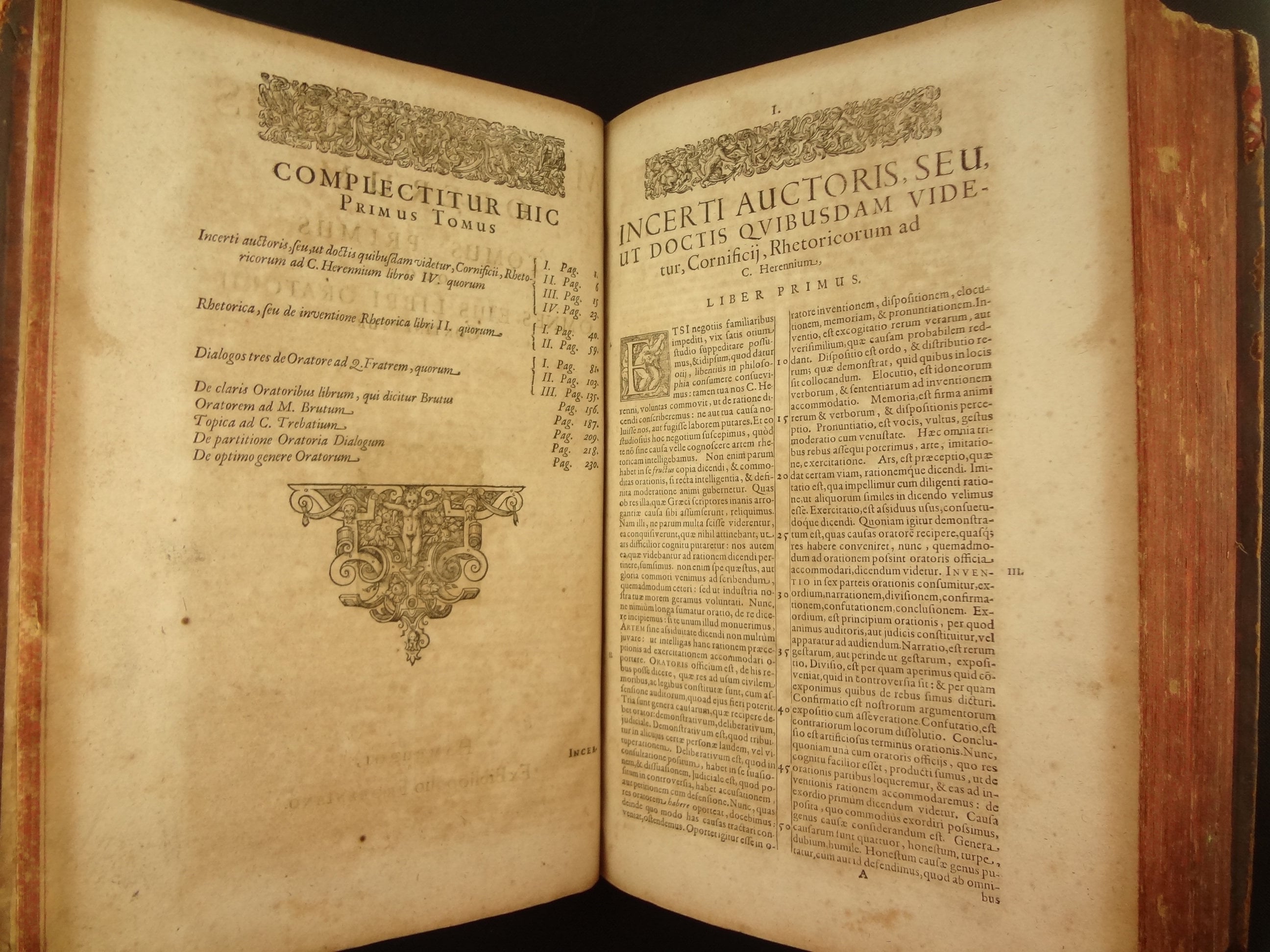 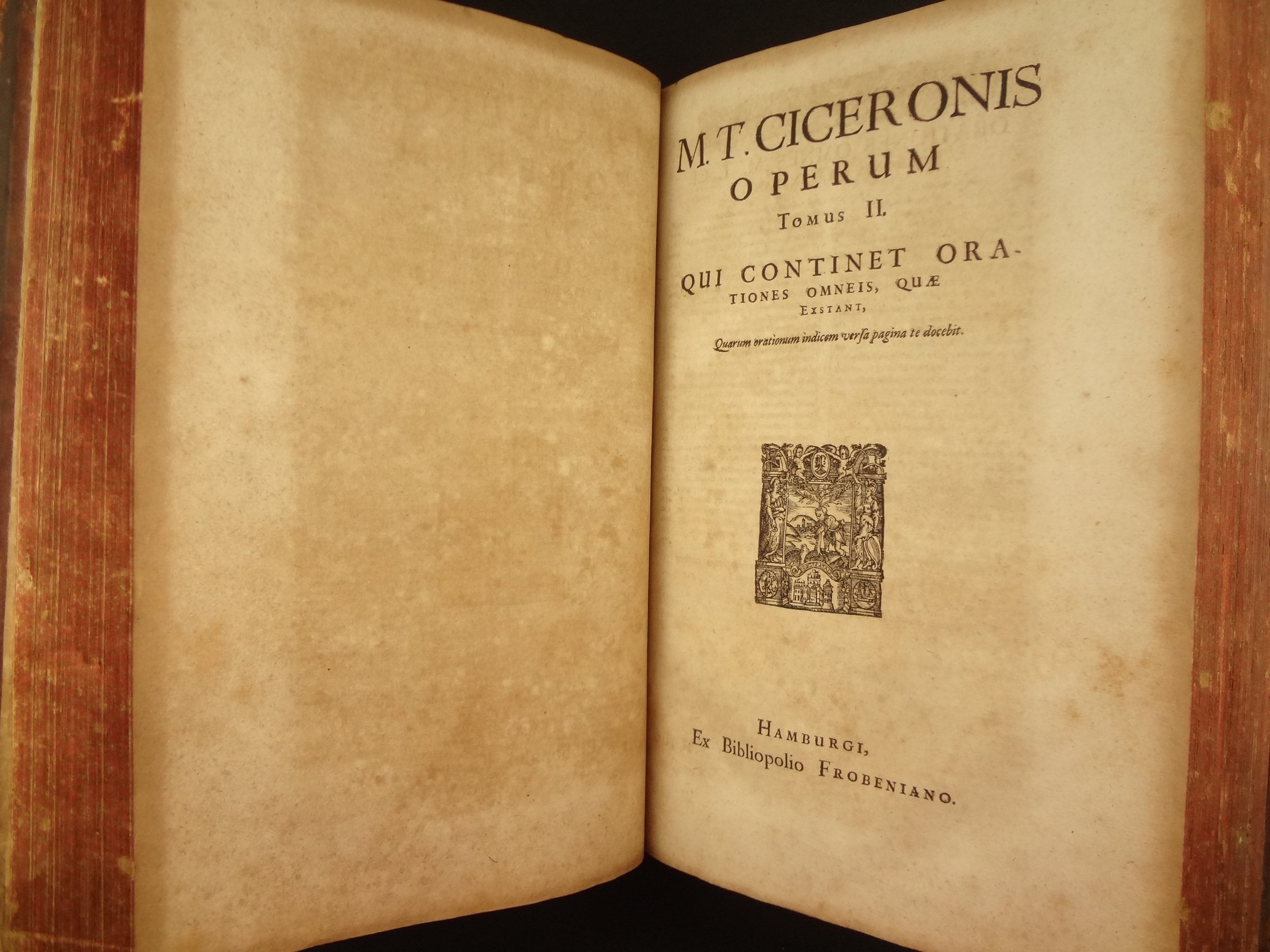 The Oratorii and Orationes of Cicero, printed by G.L. Froben in Hamburg in 1618. In this binding are the first two volumes of Cicero's Opera Omnia (Works); Froben printed a volume 3 & 4 which included his letters and some other misc. works.

In this copy, the Historiae M.T. Ciceron is richly annotated with many manicules, an early and attractive form of pointing direction to important passages with a hand-drawn hand.

This edition was edited by Jan Gruter.

"Cesar Williamson" at top of title page. Likely the late 17th century scholar. "Williamson was educated at Westminster School, Trinity College, Cambridge, Magdalen College, Oxford and Trinity College, Dublin. A noted author he held livings at Wappenham, Ardstraw, Dromiskin and Kilsaran from 1660. He was Treasurer of Christ Church Cathedral, Dublin from 1664 until 1671."

Marcus Tullius Cicero (106 BC – 43 BC) was a Roman statesman, orator, lawyer and philosopher, who served as consul in the year 63 BC. He came from a wealthy municipal family of the Roman equestrian order, and is considered one of Rome's greatest orators and prose stylists.

Petrarch's rediscovery of Cicero's letters provided the impetus for searches for ancient Greek and Latin writings scattered throughout European monasteries, and the subsequent rediscovery of classical antiquity led to the Renaissance. Subsequently, Cicero became synonymous with classical Latin to such an extent that a number of humanist scholars began to assert that no Latin word or phrase should be used unless it appeared in Cicero's works, a stance criticized by Erasmus.

His voluminous correspondence, much of it addressed to his friend Atticus, has been especially influential, introducing the art of refined letter writing to European culture. Cornelius Nepos, the 1st century BC biographer of Atticus, remarked that Cicero's letters contained such a wealth of detail "concerning the inclinations of leading men, the faults of the generals, and the revolutions in the government" that their reader had little need for a history of the period.

Among Cicero's admirers were Desiderius Erasmus, Martin Luther, and John Locke. Following the invention of Johannes Gutenberg's printing press, De Officiis was the second book printed in Europe, after the Gutenberg Bible. Scholars note Cicero's influence on the rebirth of religious toleration in the 17th century.

Cicero inspired the Founding Fathers of the United States and the revolutionaries of the French Revolution. John Adams said, "As all the ages of the world have not produced a greater statesman and philosopher united than Cicero, his authority should have great weight." Jefferson names Cicero as one of a handful of major figures who contributed to a tradition "of public right" that informed his draft of the Declaration of Independence and shaped American understandings of "the common sense" basis for the right of revolution. Camille Desmoulins said of the French republicans in 1789 that they were "mostly young people who, nourished by the reading of Cicero at school, had become passionate enthusiasts for liberty".