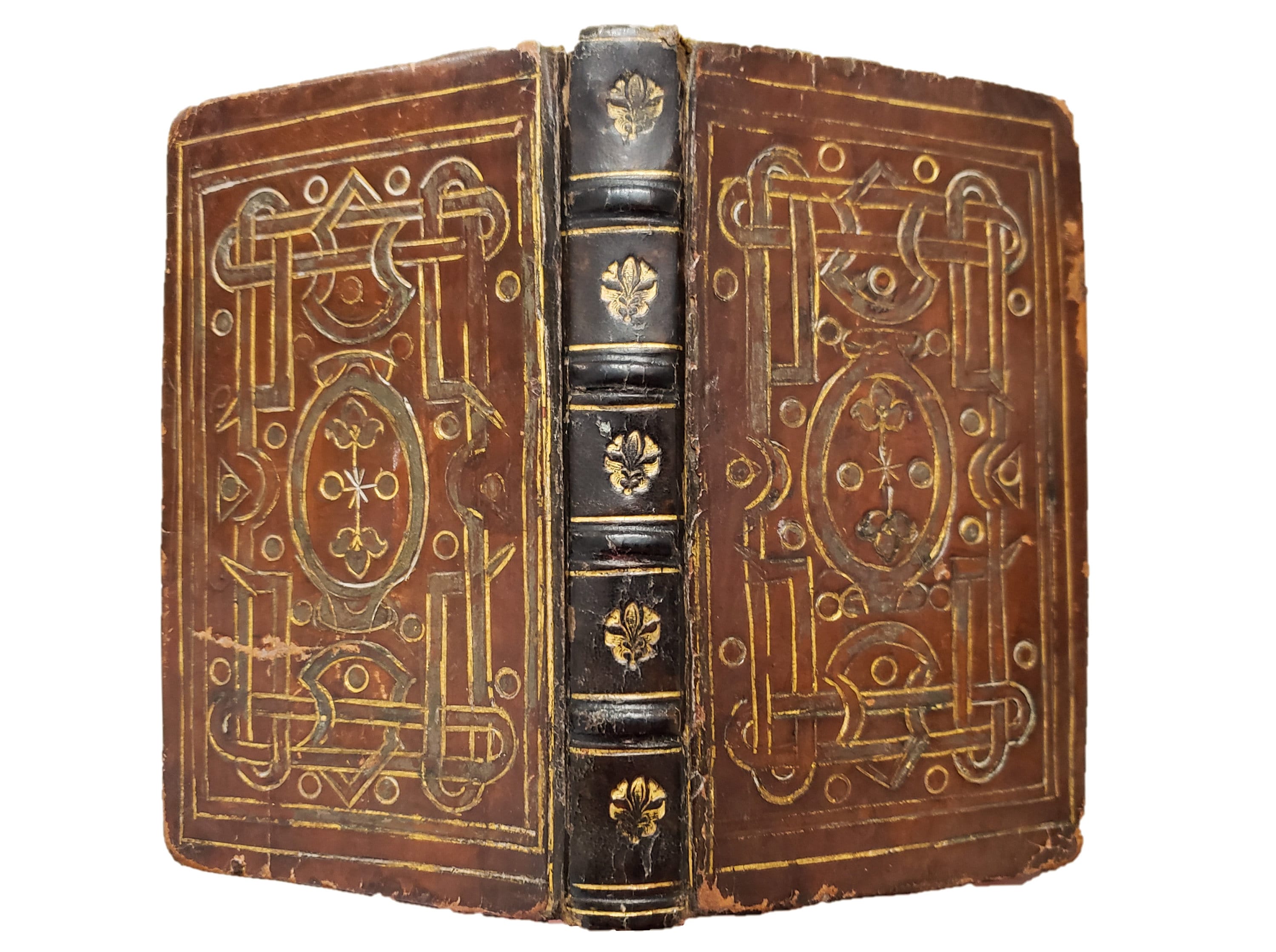 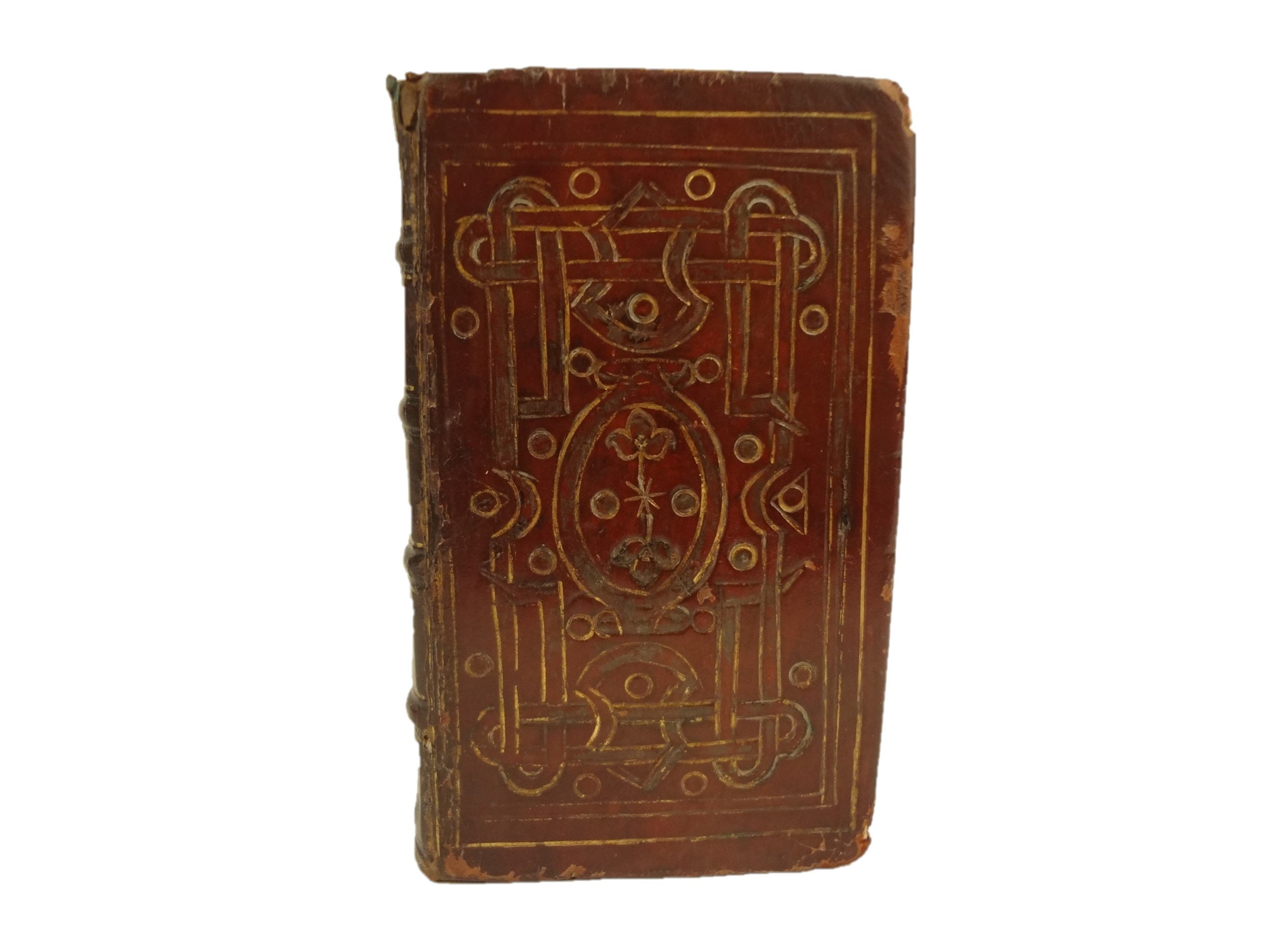 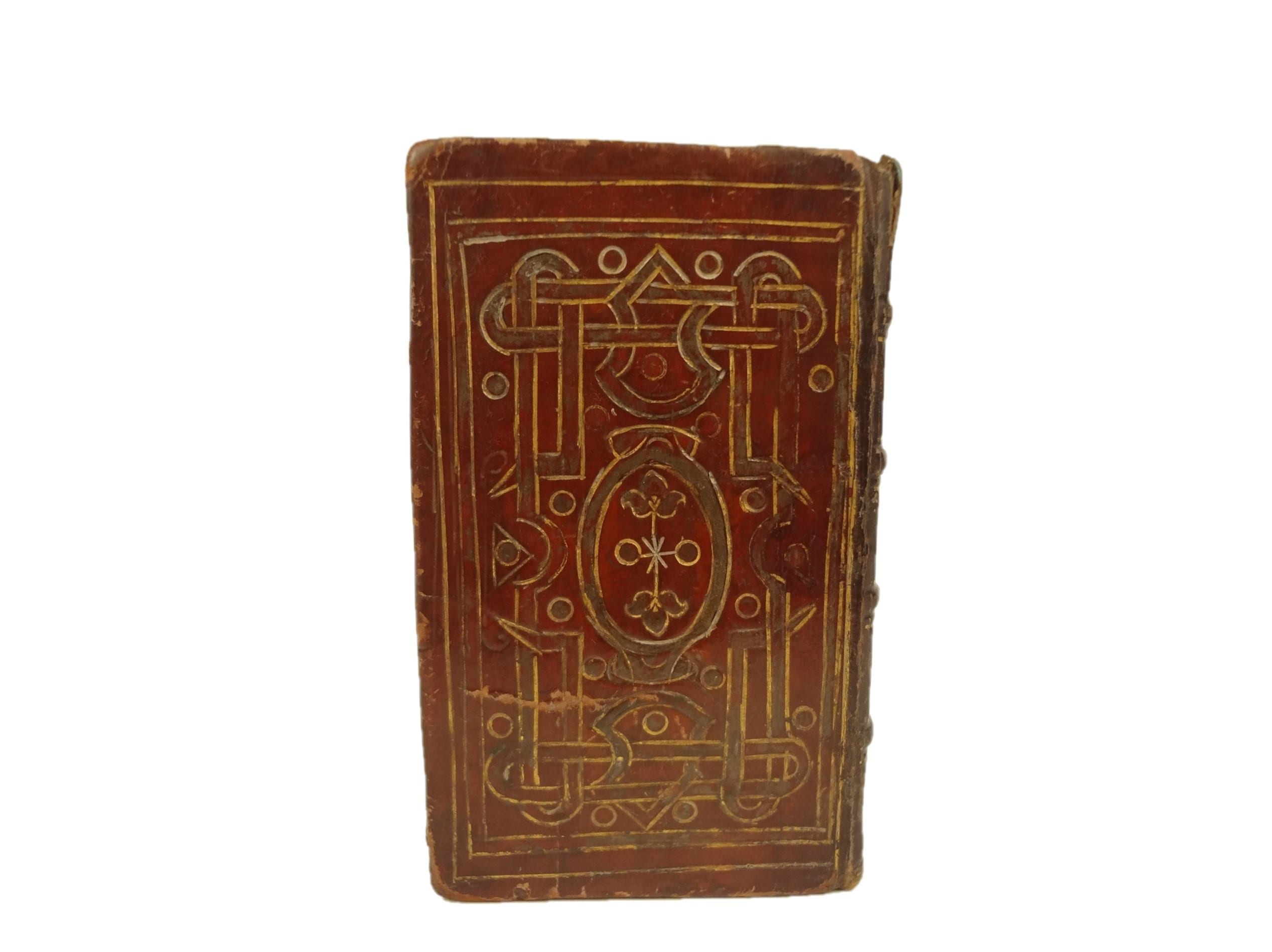 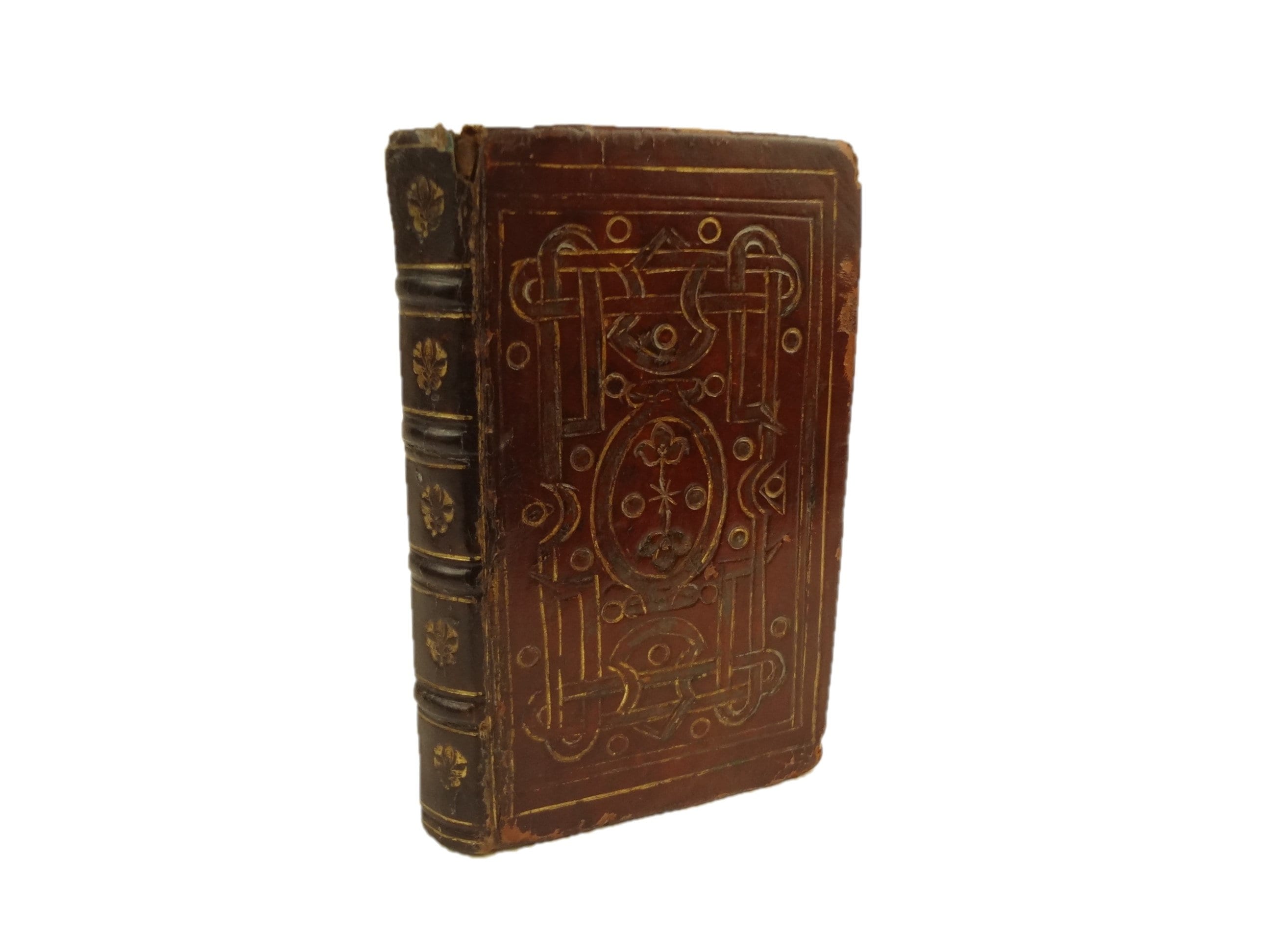 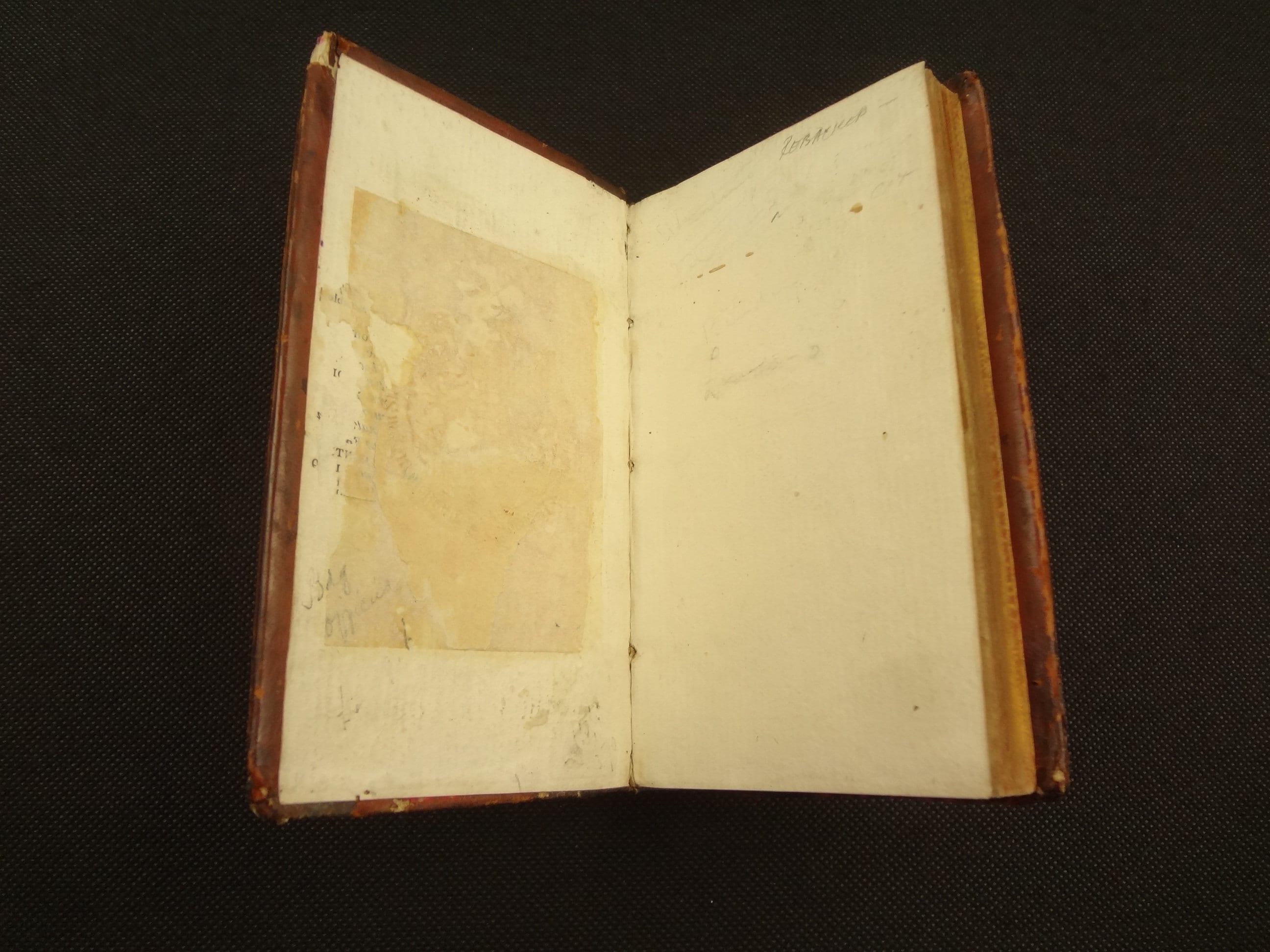 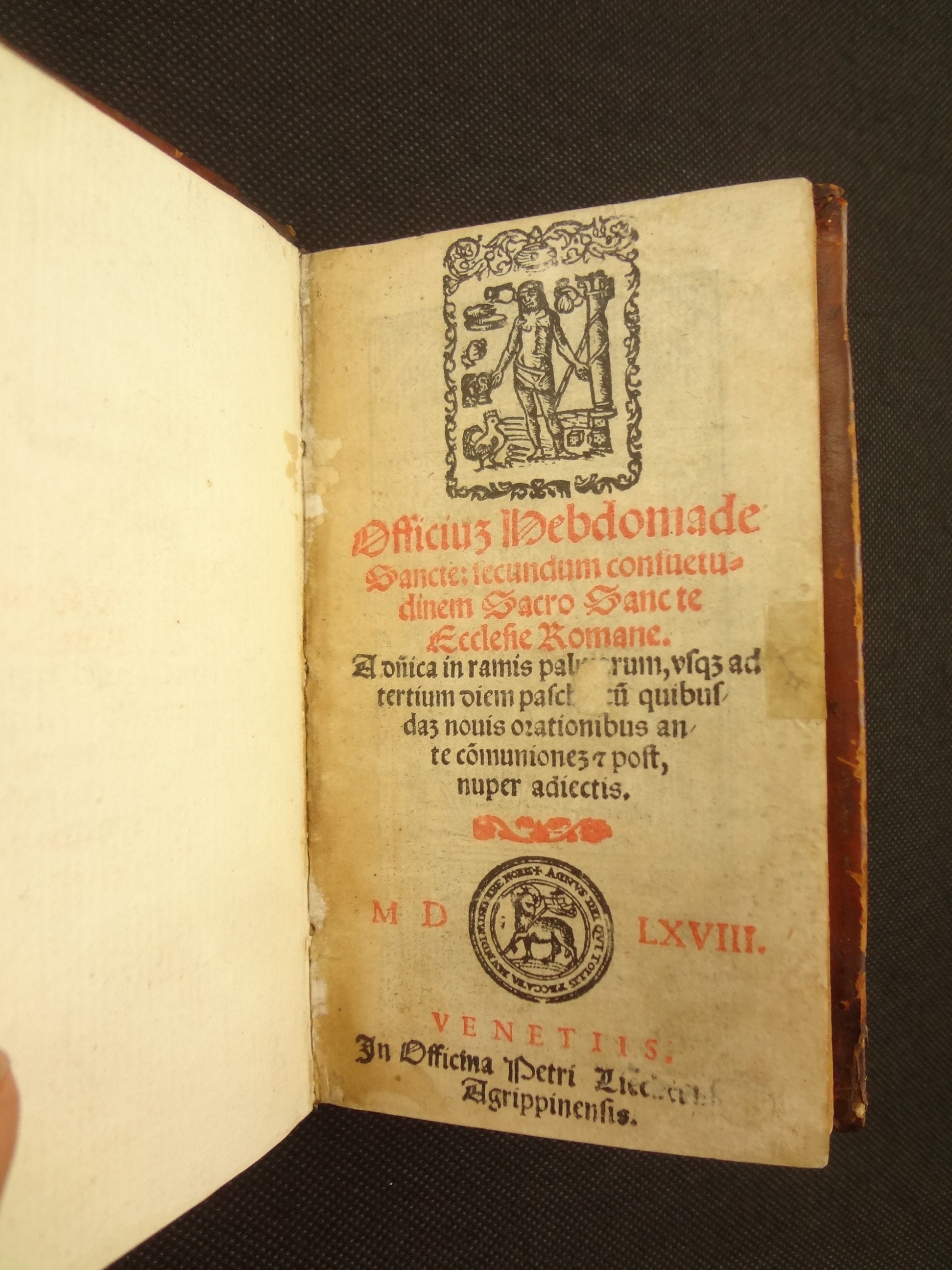 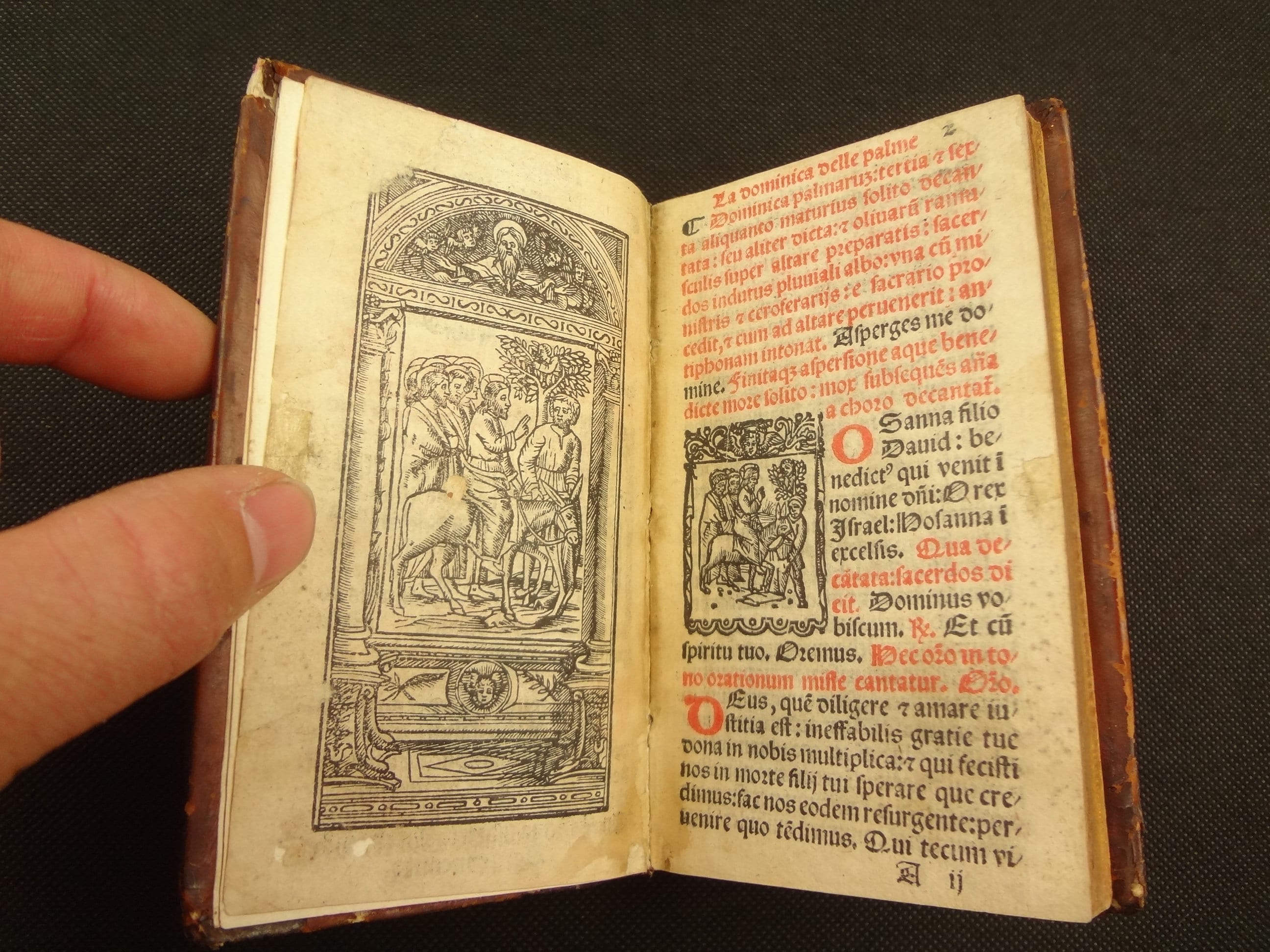 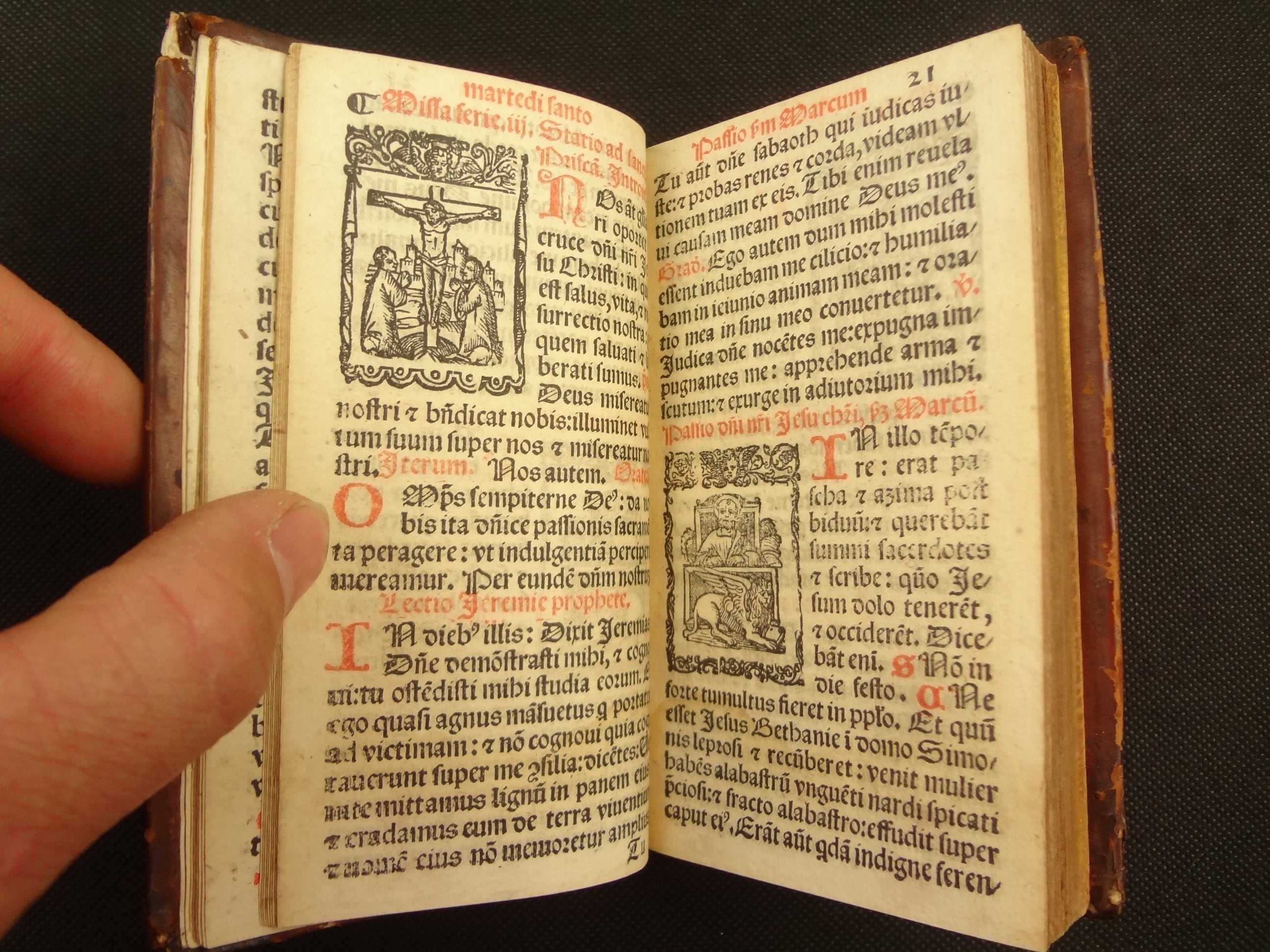 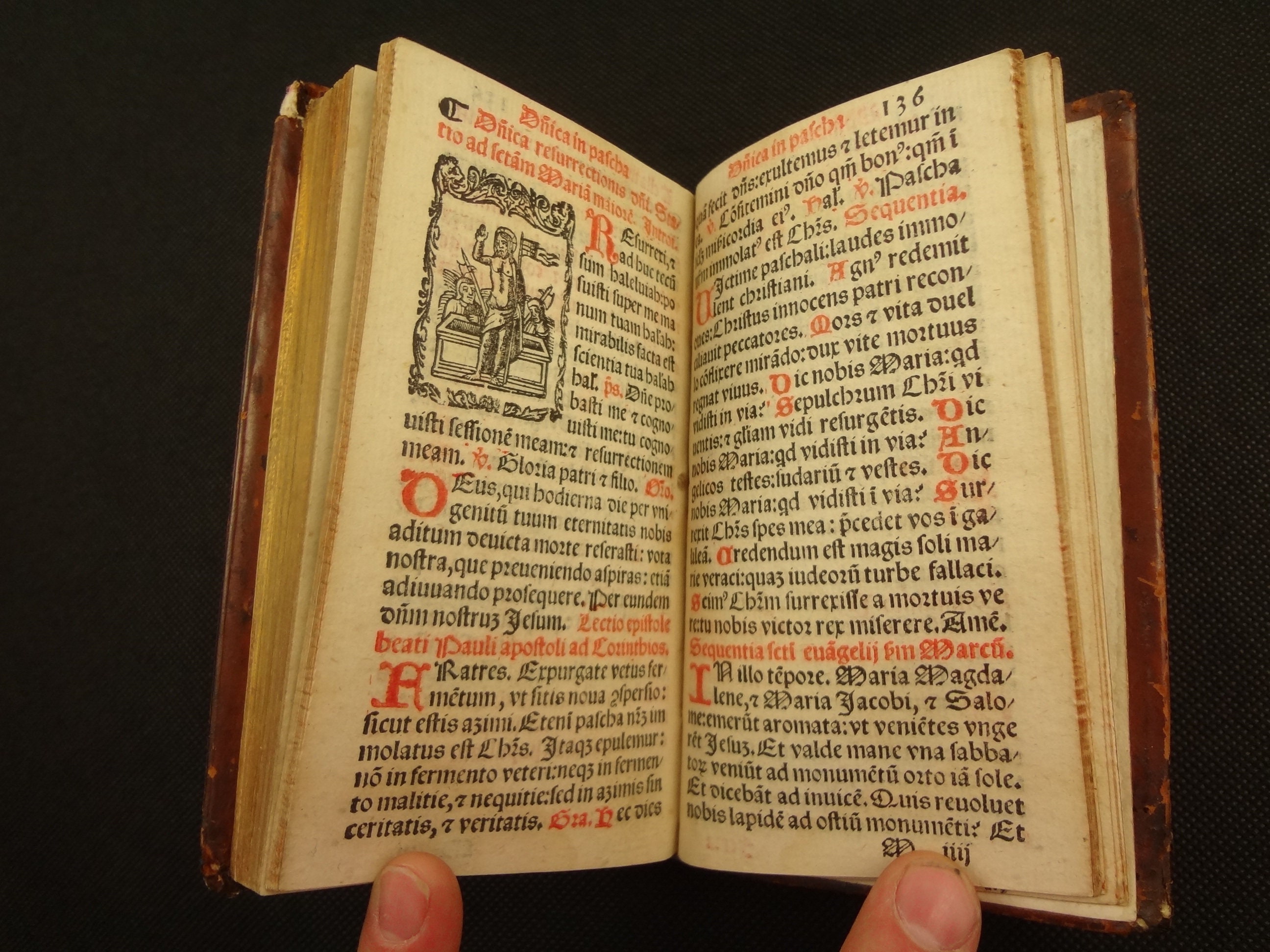 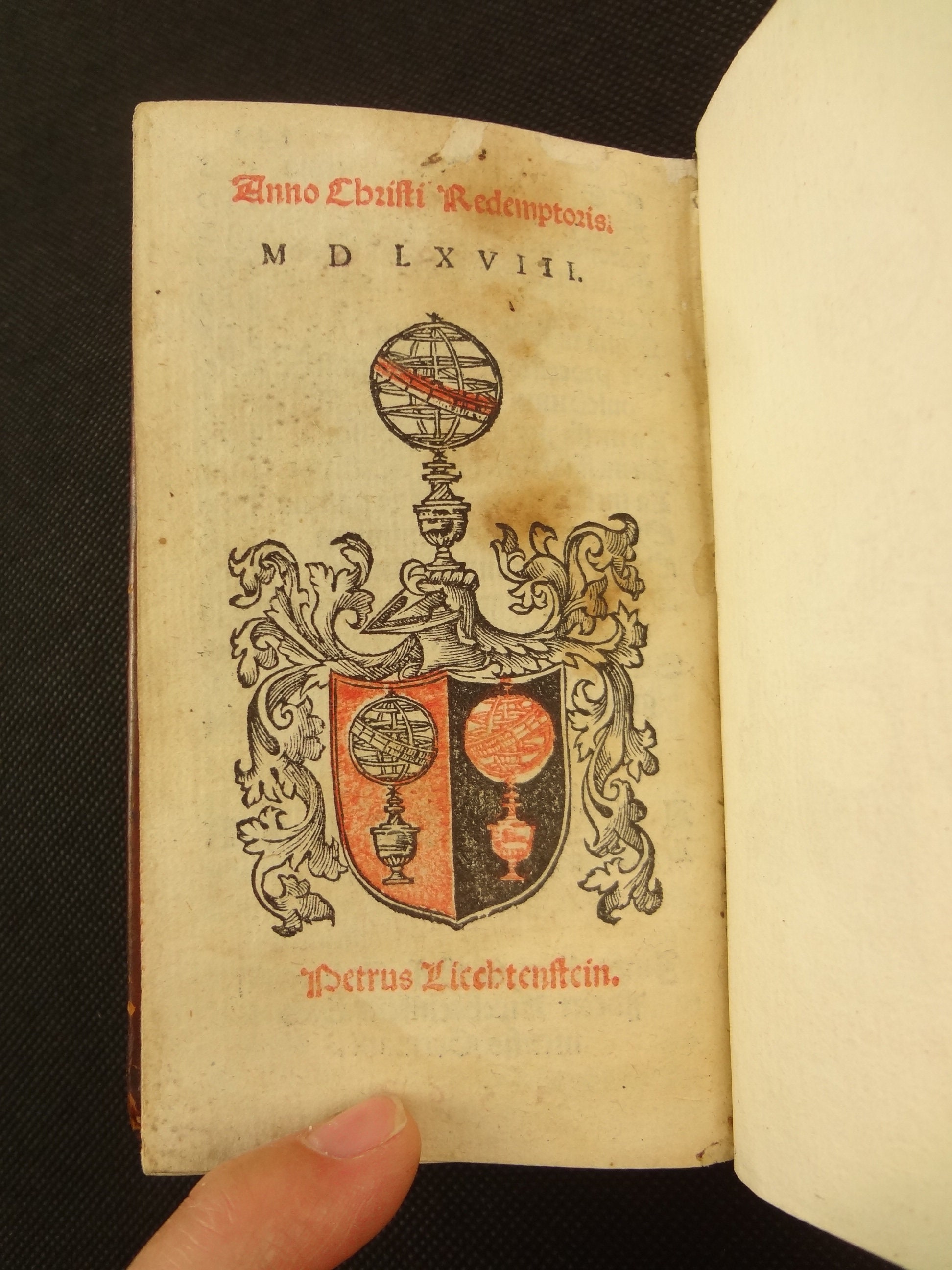 A very rare edition, printed in red and black by one of the earliest printers, with historiated woodcut illustrations, and bound in the beautiful 16th century entrelac strapwork design.

The entrelac binding has its origins in the geometric artwork of the Islamic world. The interlocking designs were found in some of the finest libraries in the 16th century and is attributed to binders in Italy and France (though mostly France). The libraries of Henry II, the Medicis, Jean Grolier and Thomas Wotton all had examples of entrelac bindings (causing this design to sometimes be labeled Grolieresque). If you examine the pictures you'll see the remnants of a darker (paint?) decorated the strapwork, though largely extinguished now.

The work homed within is quite rare and provides the Offices of the Holy Week (Palm Sunday until Easter Morning). It was printed by the printing house of Petri Leichtenstein, a venerable incunabular printer, and includes his well-regarded colophon at the rear.

Measures approx. 13.5 x 8 x 2 cm, 12mo. Calf binding with gilt tooling in the entrelac style en-circulating a central motif of flowers, with outer gilt fillet borders to the boards. Board edges also have a fillet. Spine is later, with four raised bands, and each compartment with a central flor-de-lis. All edges gilt (AEG).

Printed in red and black, with many smaller woodcuts, a full-page woodcut of Jesus on the donkey at the back of the title page, and a full-page colophon at the rear.

See pictures. Vintage patina, with the pleasing look of history. Respined, likely 19th century. Use wear, with edge chips, rubbing, corner wear, etc.. Crack at top 1 cm. of both joints. It seems that paint remnanats, or something, exists above strapwork. Endpapers renewed with respining. Several ex libris plates removed (but remnants remain) on pastedown. Someone erased the bookseller notes on the flyleaf, still several remain. Some toning to pages throughout. 2x.5 cm repair at fore-edge of title page (tape?). Two tiny holes at bottom edge, in printer's name. Tiny repair to fore-edge of following page. Fox spots page 140 to end (see picture of colophon). No annotations. Lacking leaf 145 (n1). A very handsome book, with some signs of wear, but still entirely functional and not fragile.