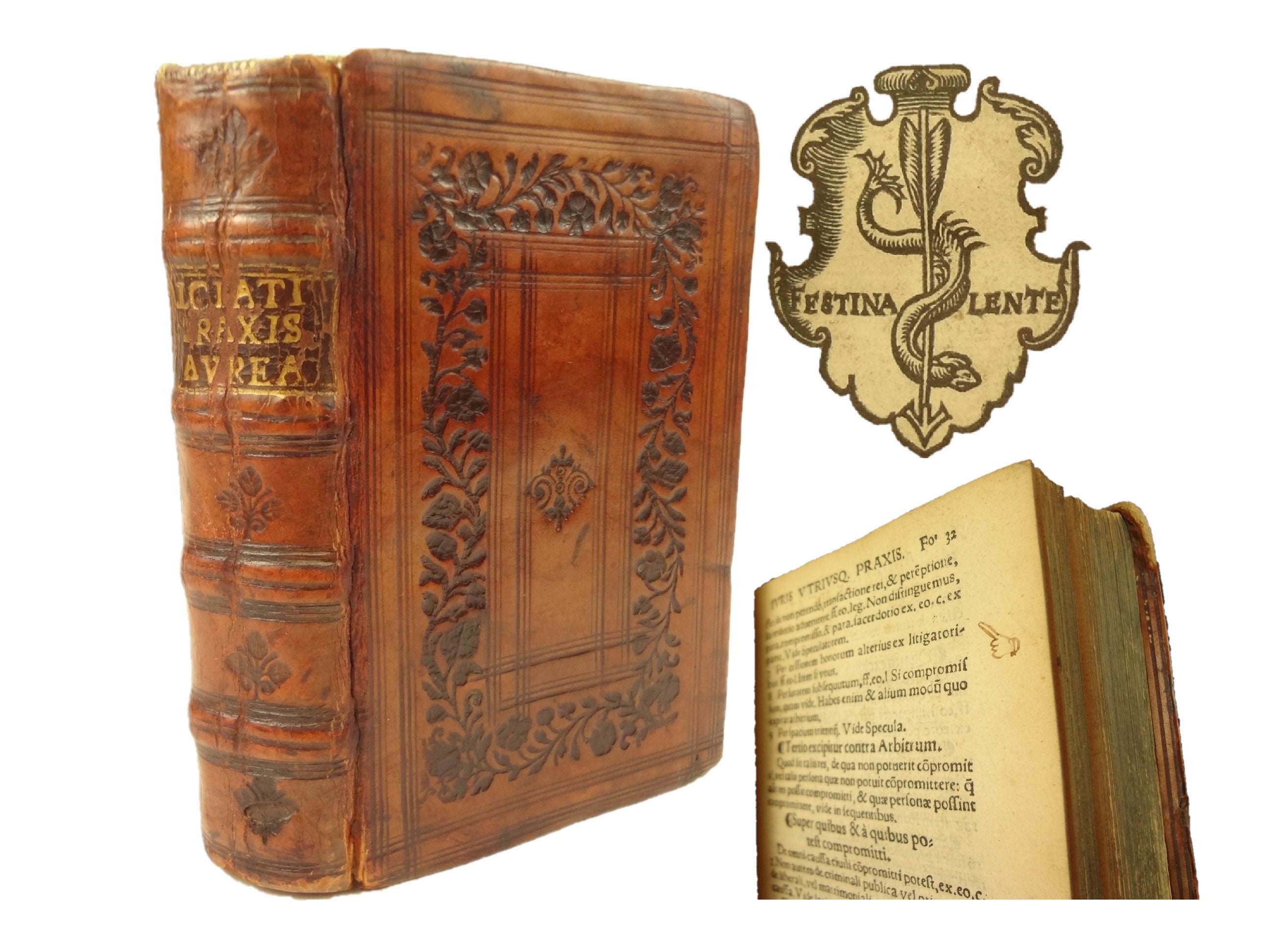 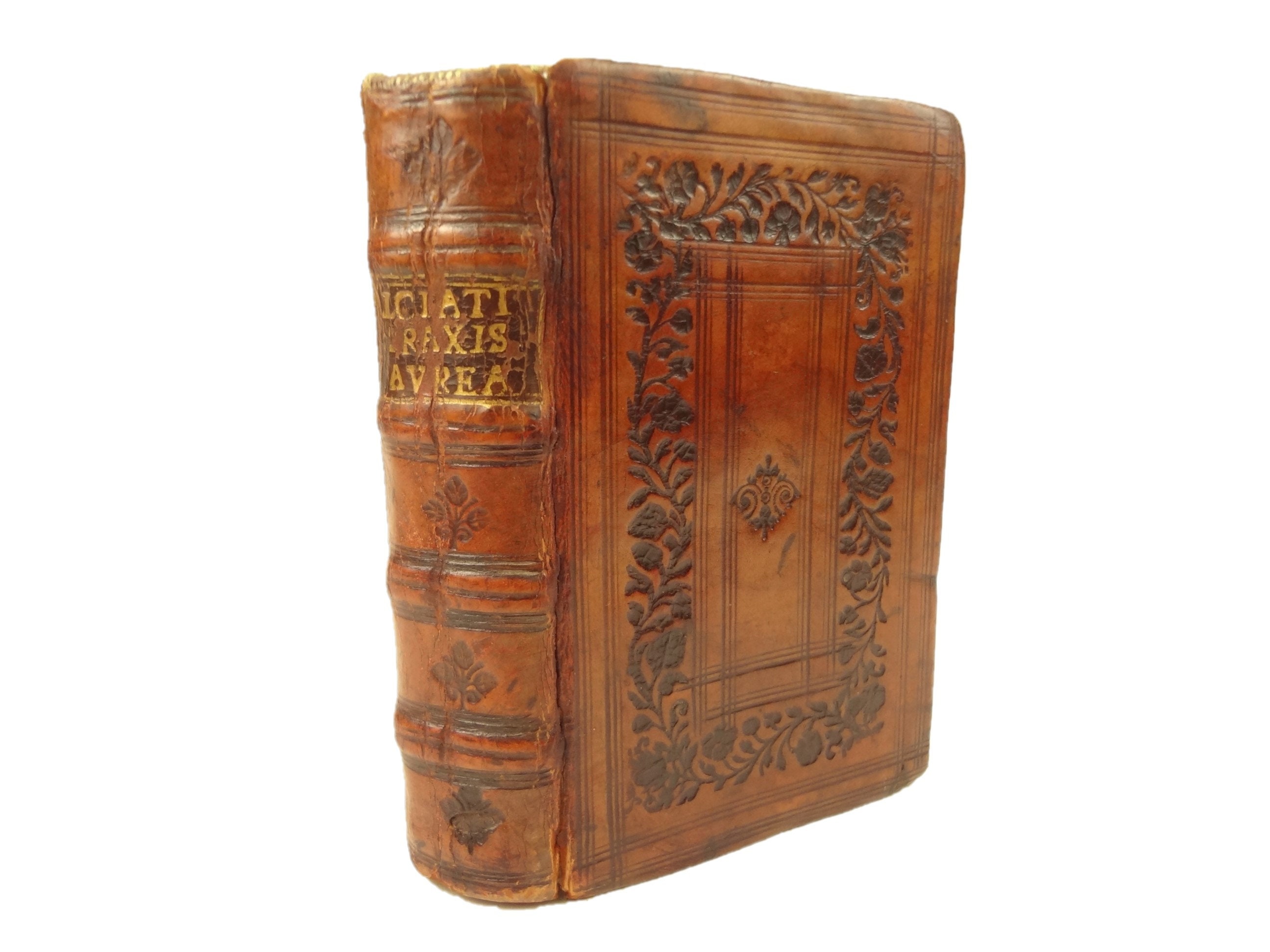 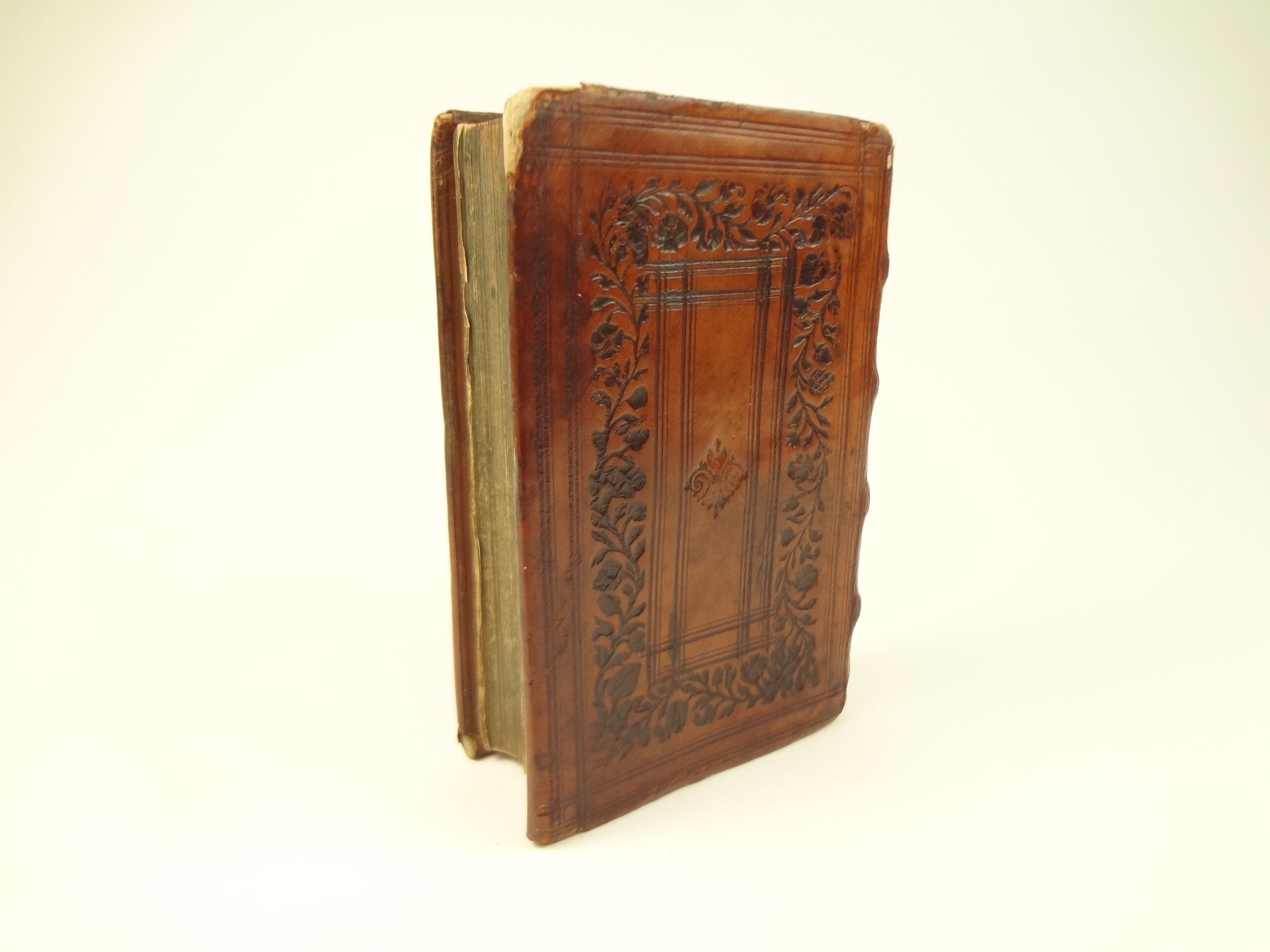 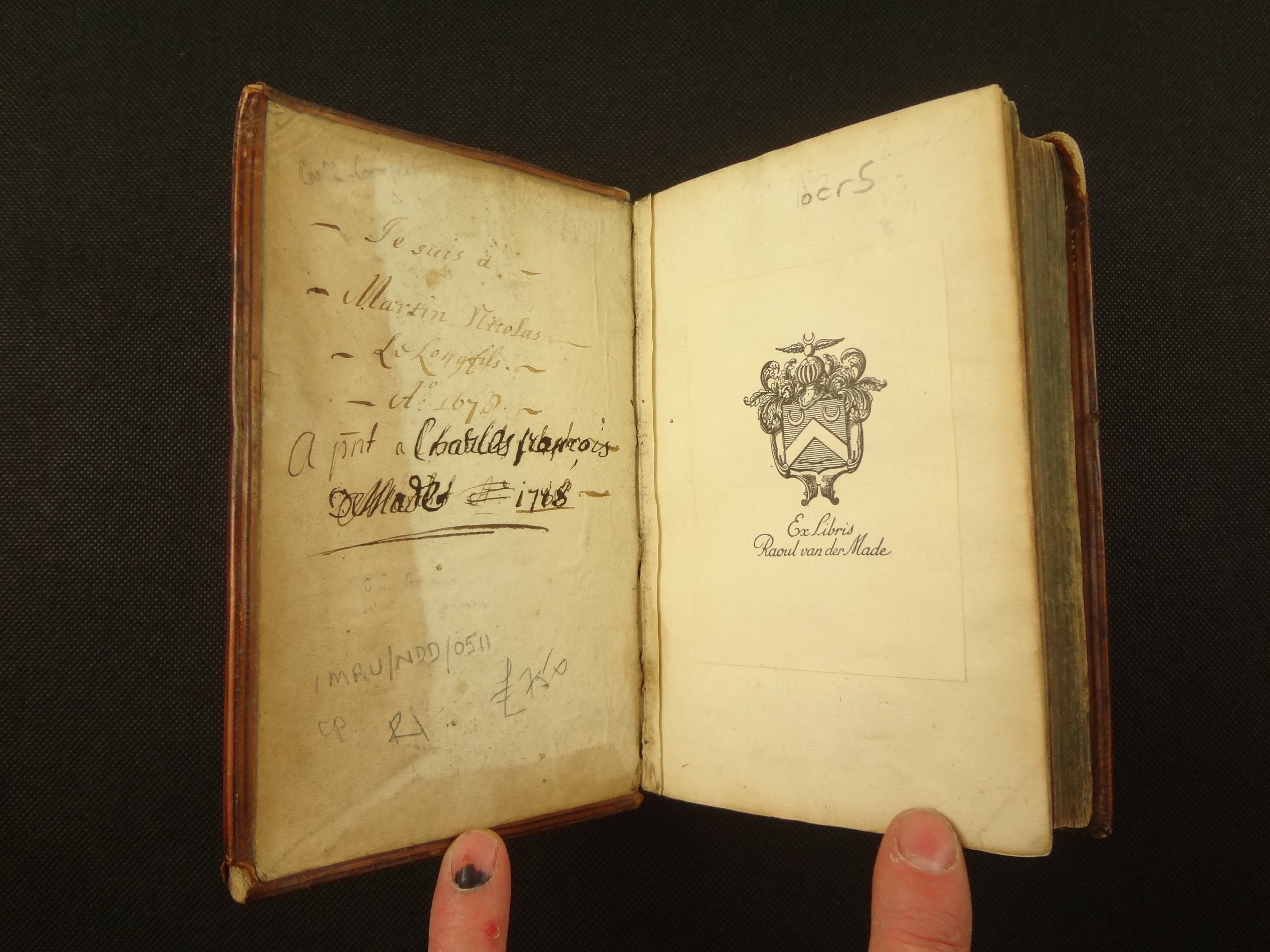 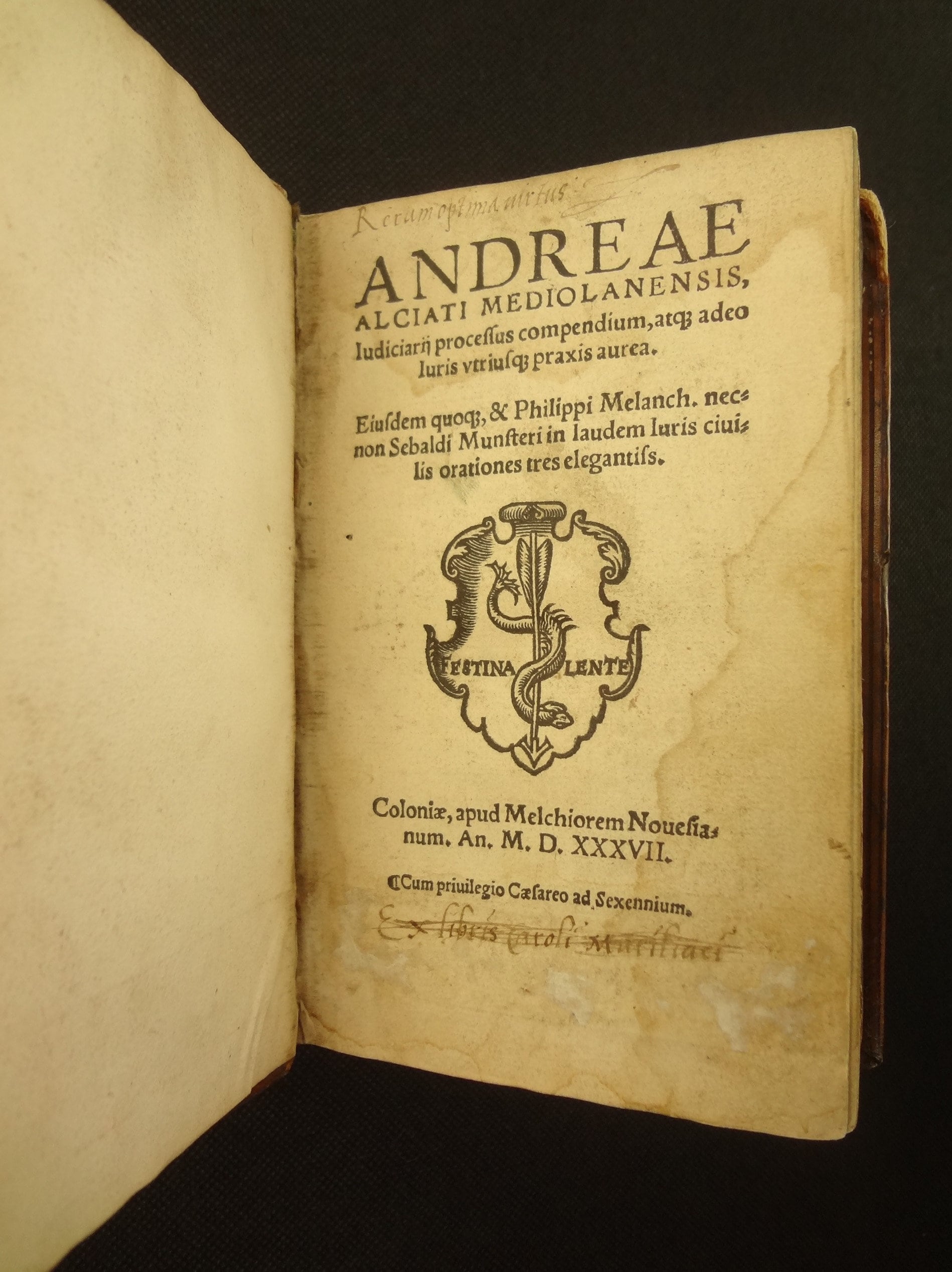 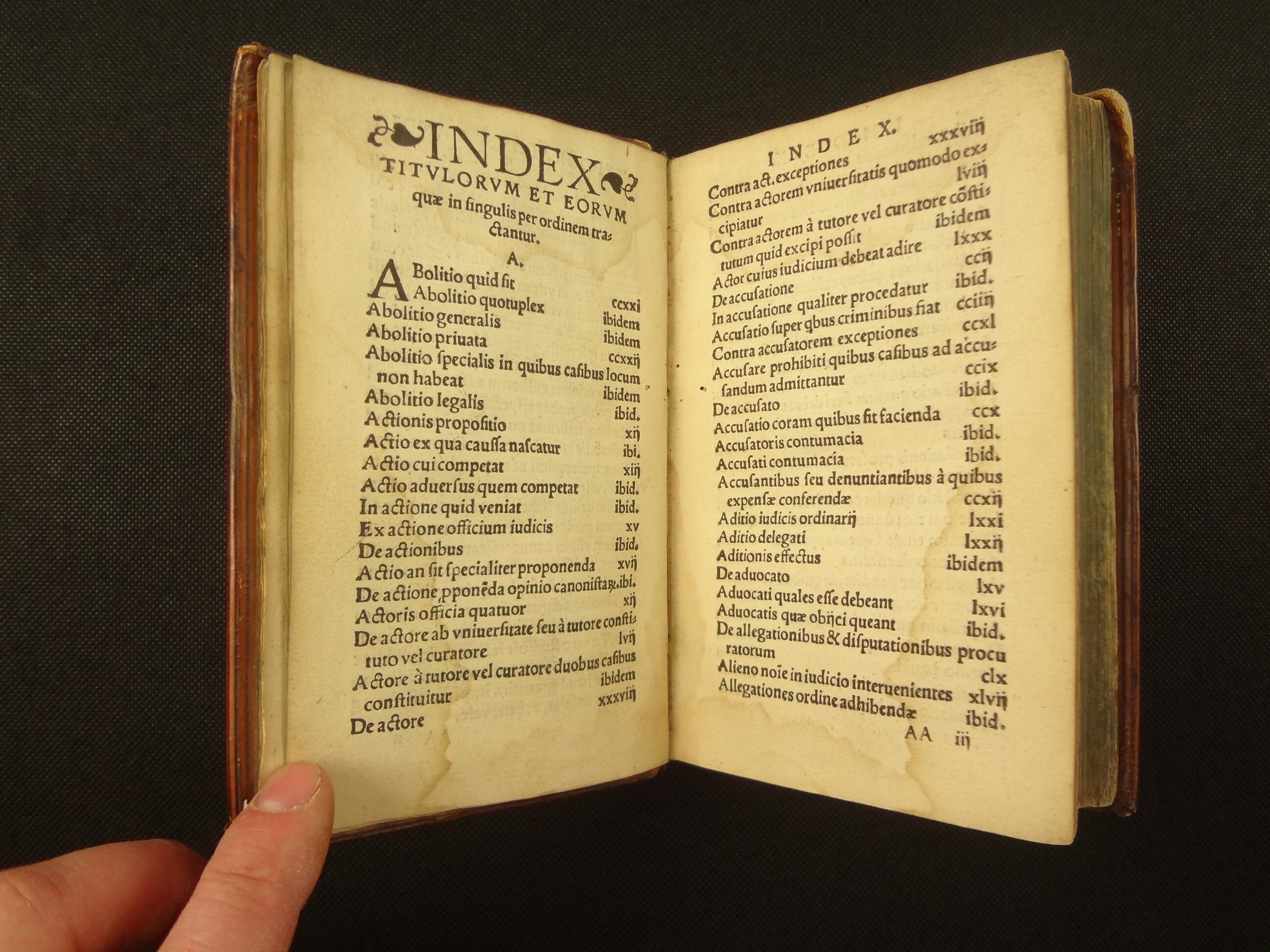 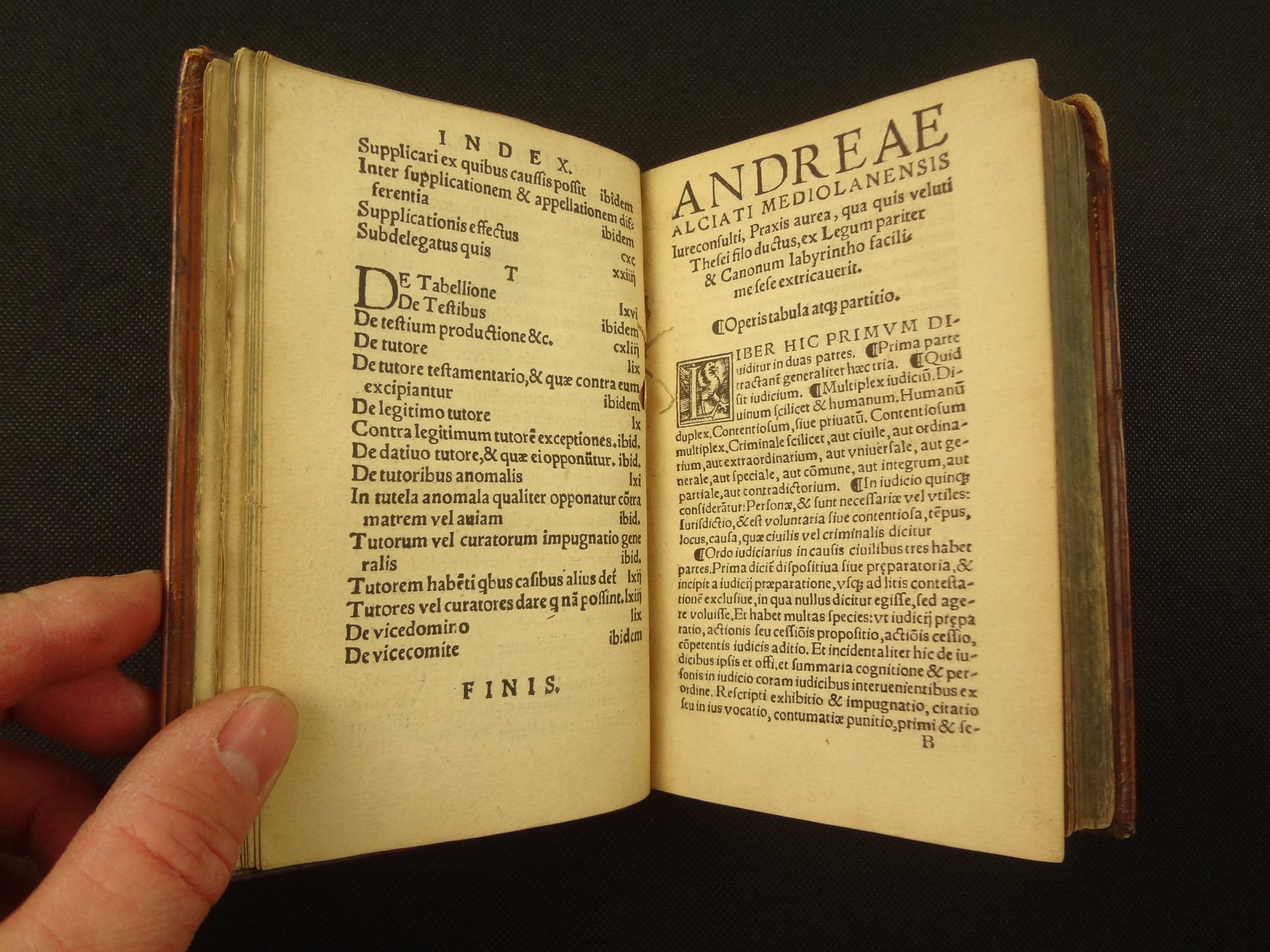 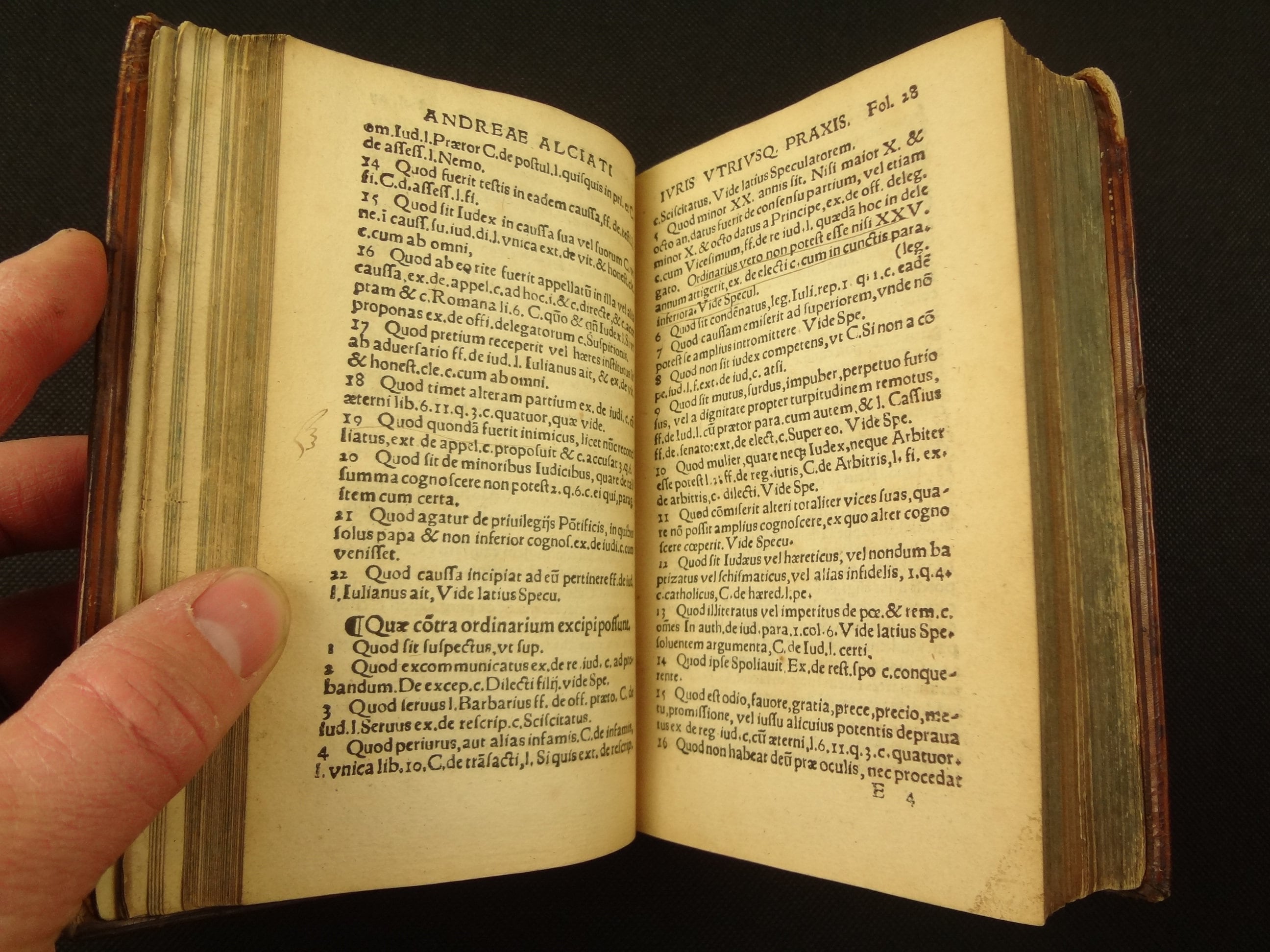 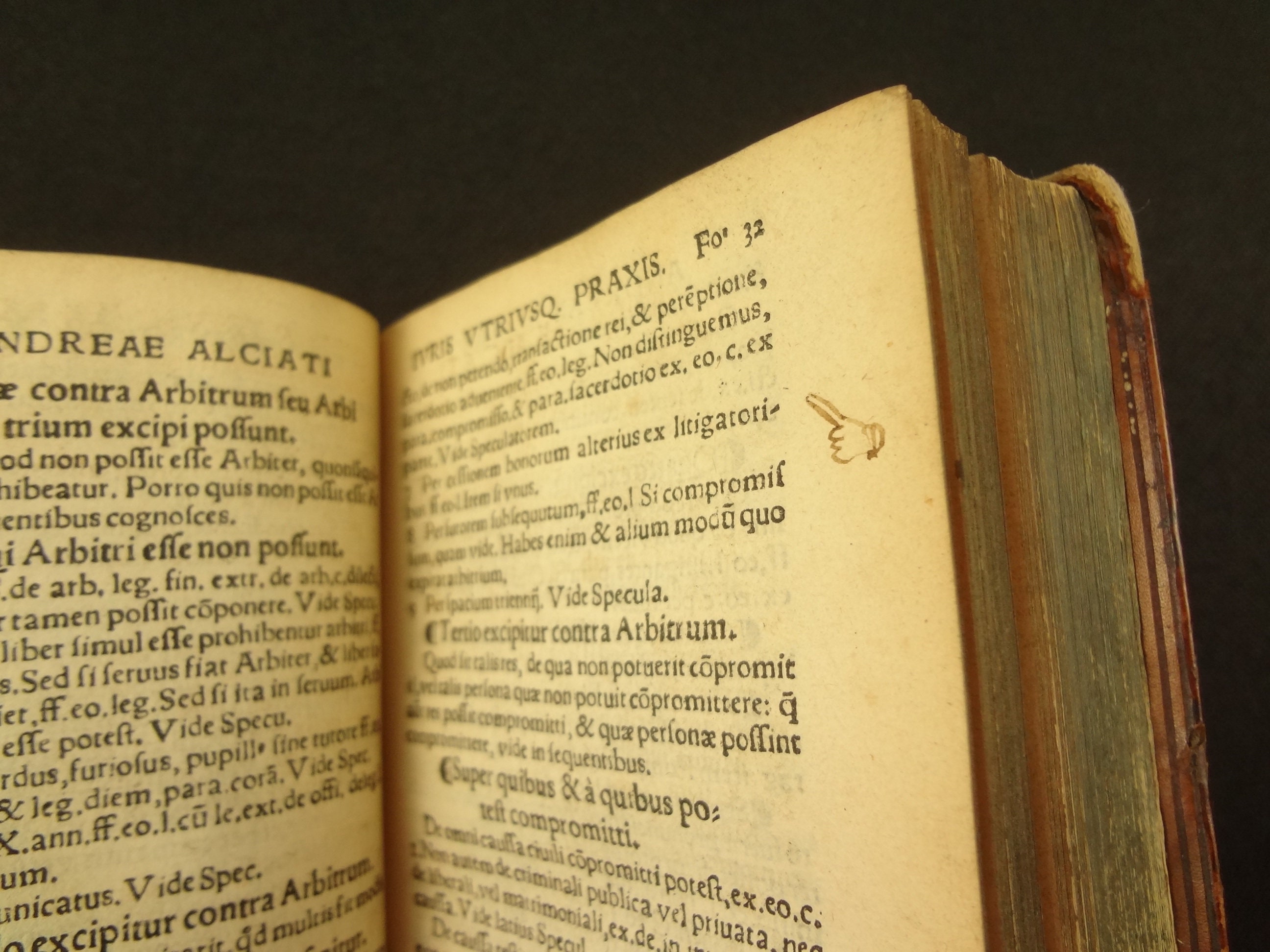 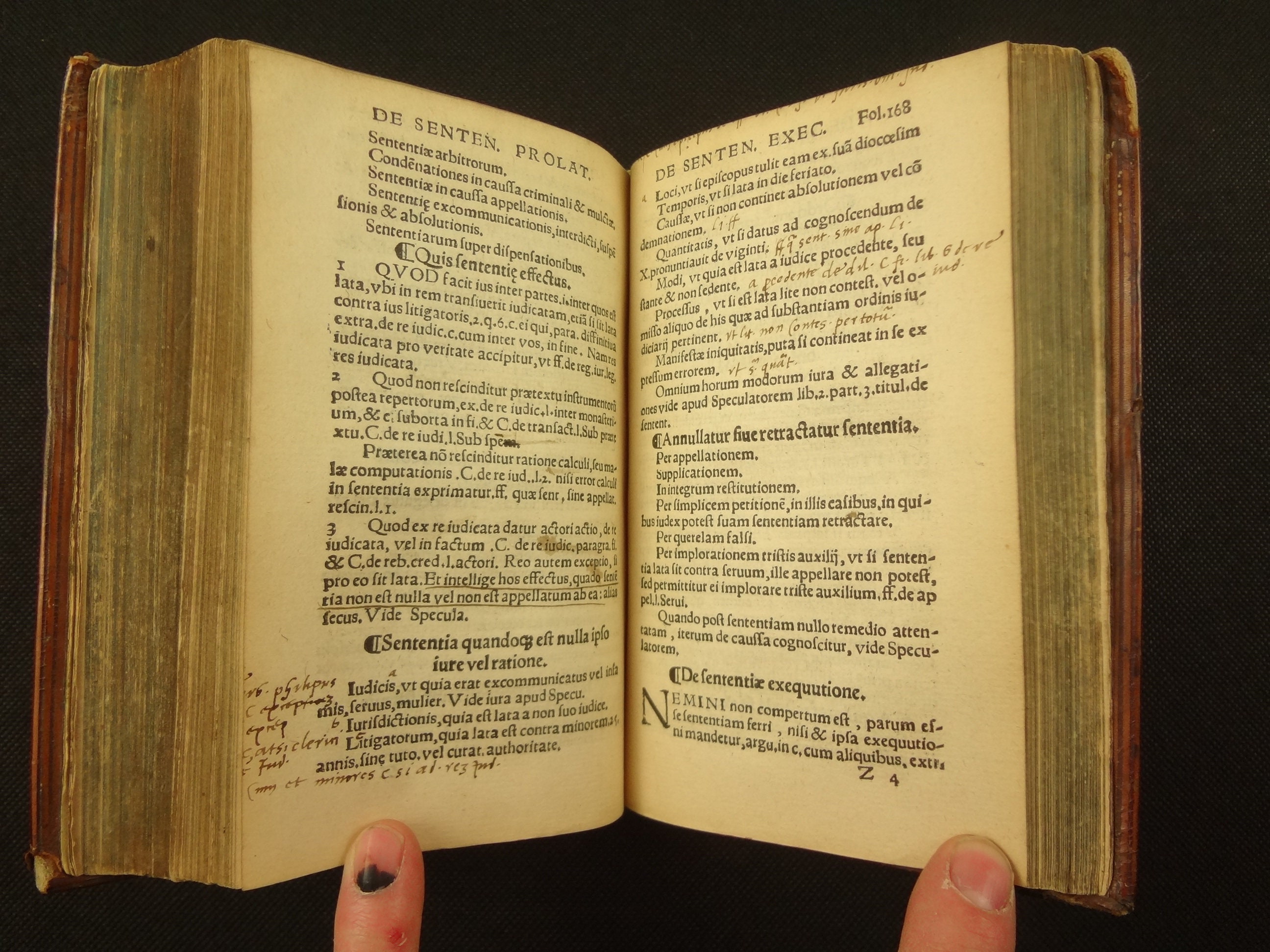 A rarer title in the Alciati catalogue, Mediolanensis, Judiciarii Processus Compendium, with OCLC showing only a handful of printings between 1535 and 1542, and then never again.

This is a unique copy, because it bears the annotation "Ex libris Caroli Mariliaci", in an old hand, on the title page; this name translates to Charles Marillac, and if you search the term you'll find it has only been used to recognize Charles de Marillac: French diplomat, and bishop, who sat in the court of Henry VIII, before becoming part of the privy council of Henry II (France), among other adventures. There is contextual evidence, also, within the book; for example, page 178 discusses the work of "delegato", which a highlighting mark has been made next to. Alciati was considered one of the finest legal minds of the 16th century.

That being said, I can't find another example of a book from de Marillac's library with which to confirm.

Two copies of this edition in the world's libraries, one in the Harvard Law School Library, and the other at the U of W Libraries (OCLC #20047729).

Alciati was born in Alzate Brianza, near Milan, and settled in France in the early 16th century. He displayed great literary skill in his exposition of the laws, and was one of the first to interpret the civil law by the history, languages and literature of antiquity, and to substitute original research for the servile interpretations of the glossators. He published many legal works, and some annotations on Tacitus and accumulated a sylloge of Roman inscriptions from Milan and its territories, as part of his preparation for his history of Milan, written in 1504-05.

Ex libris plate on flyleaf. Space at gutter between endpapers and title page. Some soiling in gutter. Note in old hand at top of title page, no text affected. Ex libris note under printer's notes at bottom of title page, remnants of paper that was pasted over it. Title page, and Index, has some moisture marks at edges and in text. Spot of moisture at F.7 fore-edge, no text affected. Moisture marks intrusions in margins at rear of book. Near front, some worming near gutter. Underlining and annotations intermittent throughout. Occasional fox spot, thumbing mark, dog ear. 33/34 ink smudge, and 84/85. Ink spot, bottom edge 100 to 160, no text affected. Annotations trimmed for the later binding (Cambridge style?).

Although there is some wear of time, the book functions well and the leather feels healthy (not dry rotted).