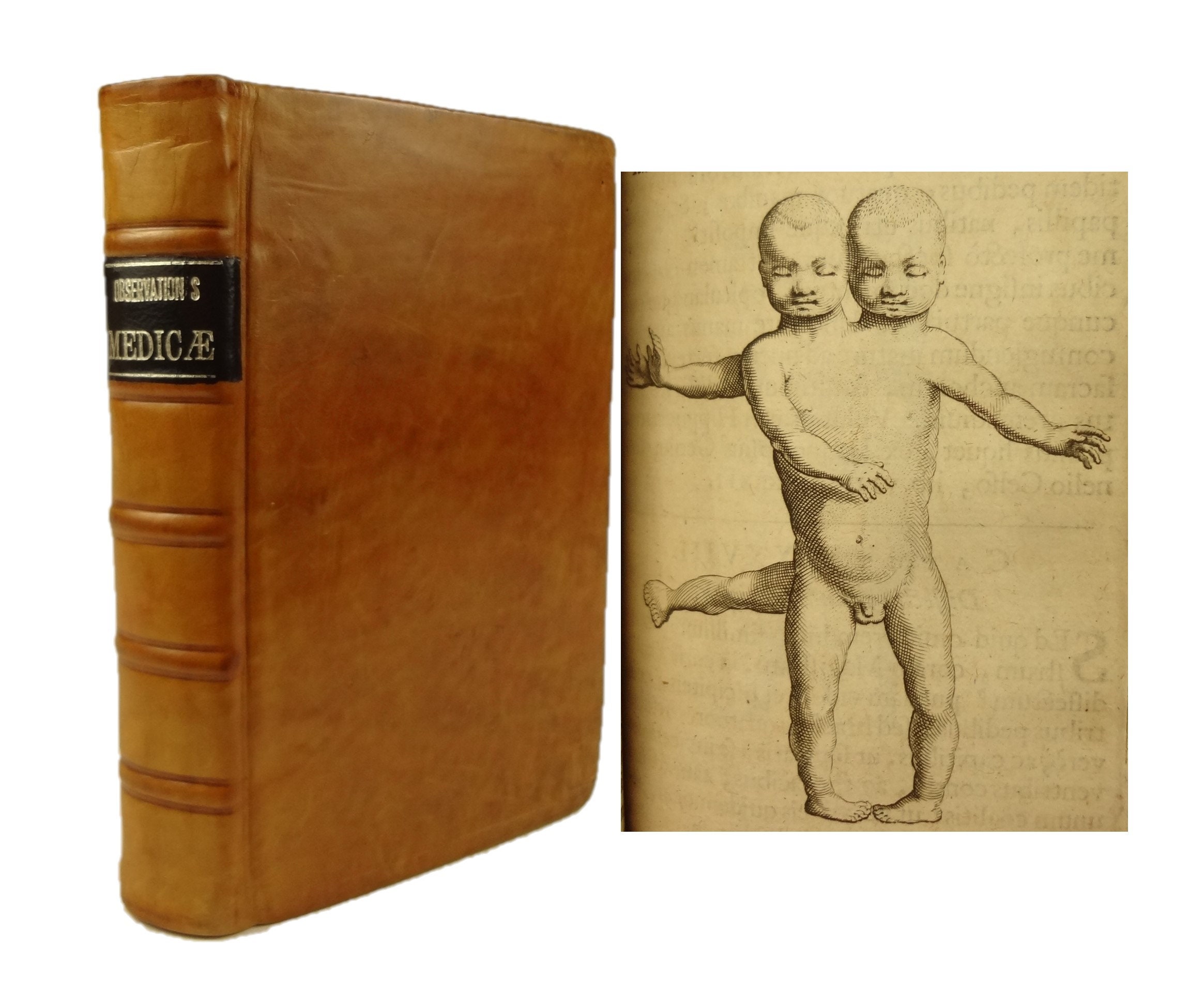 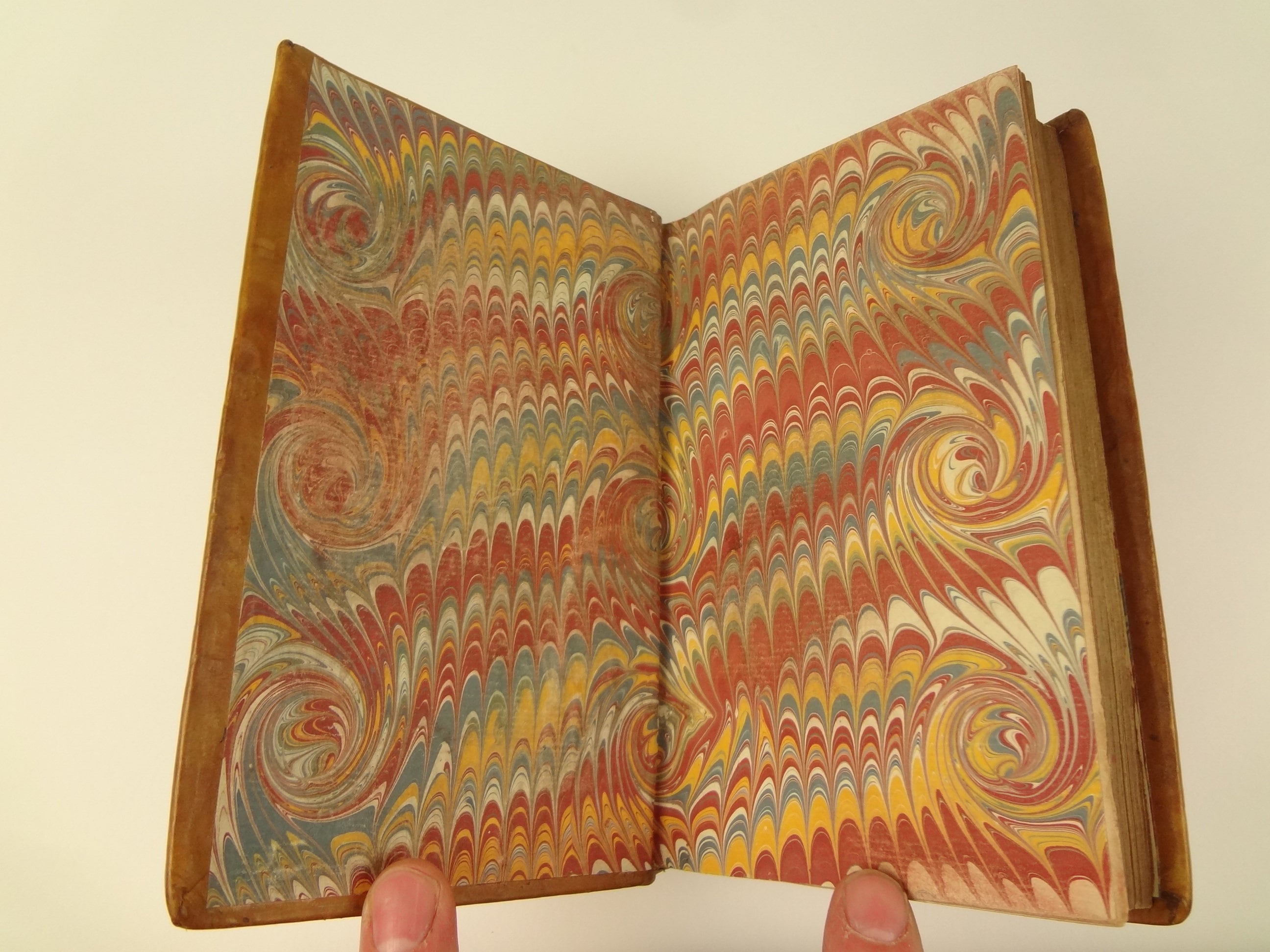 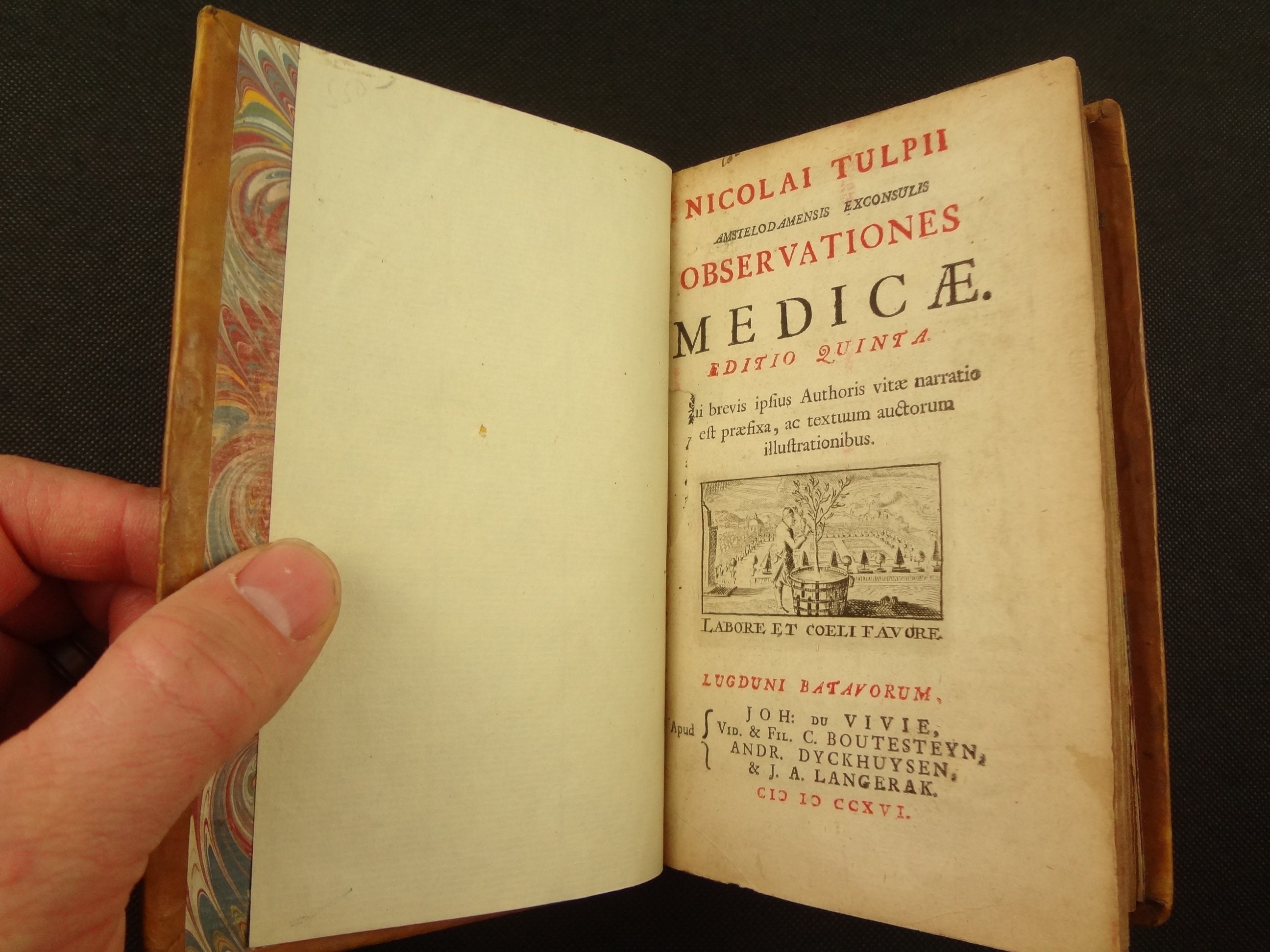 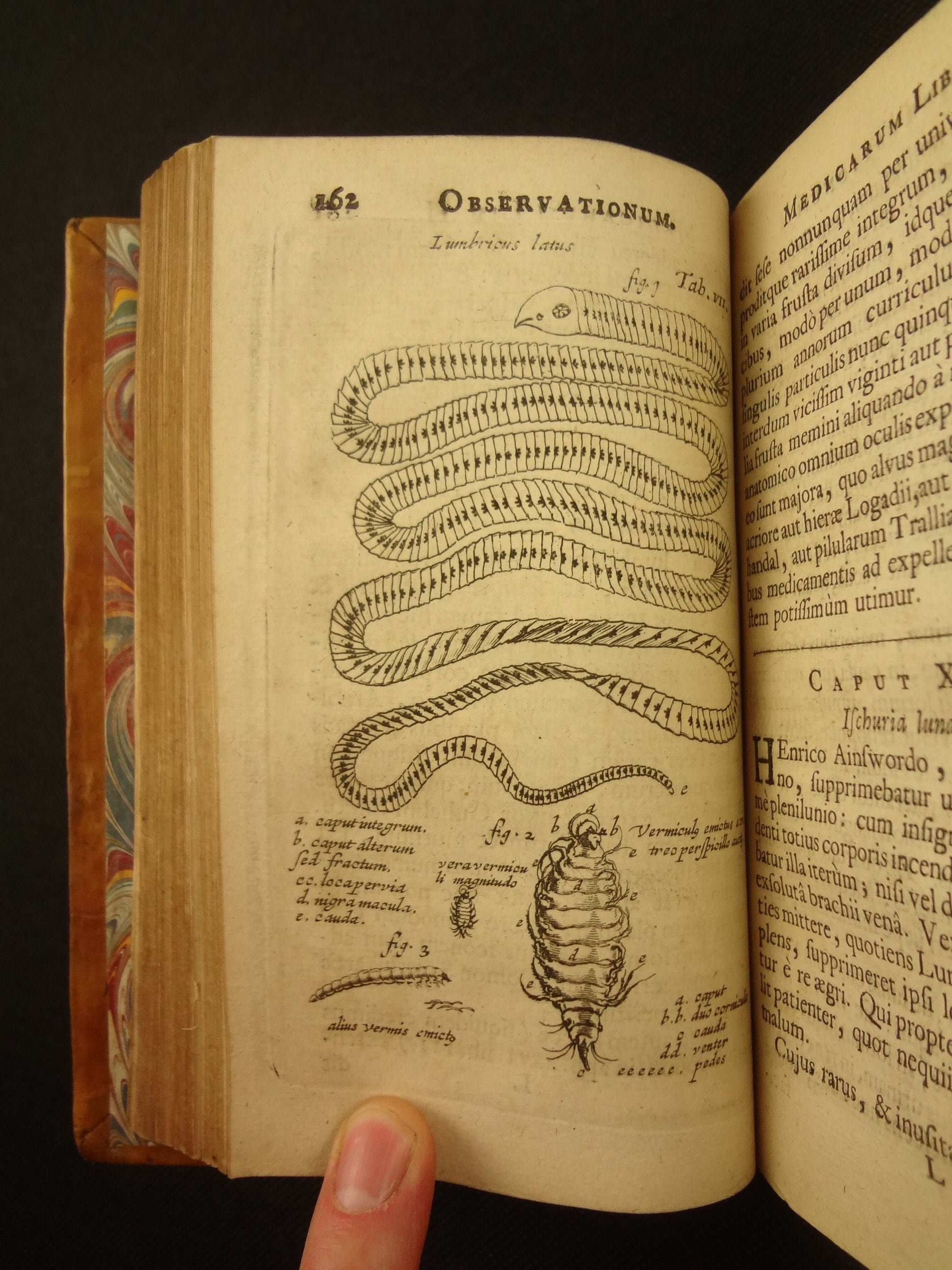 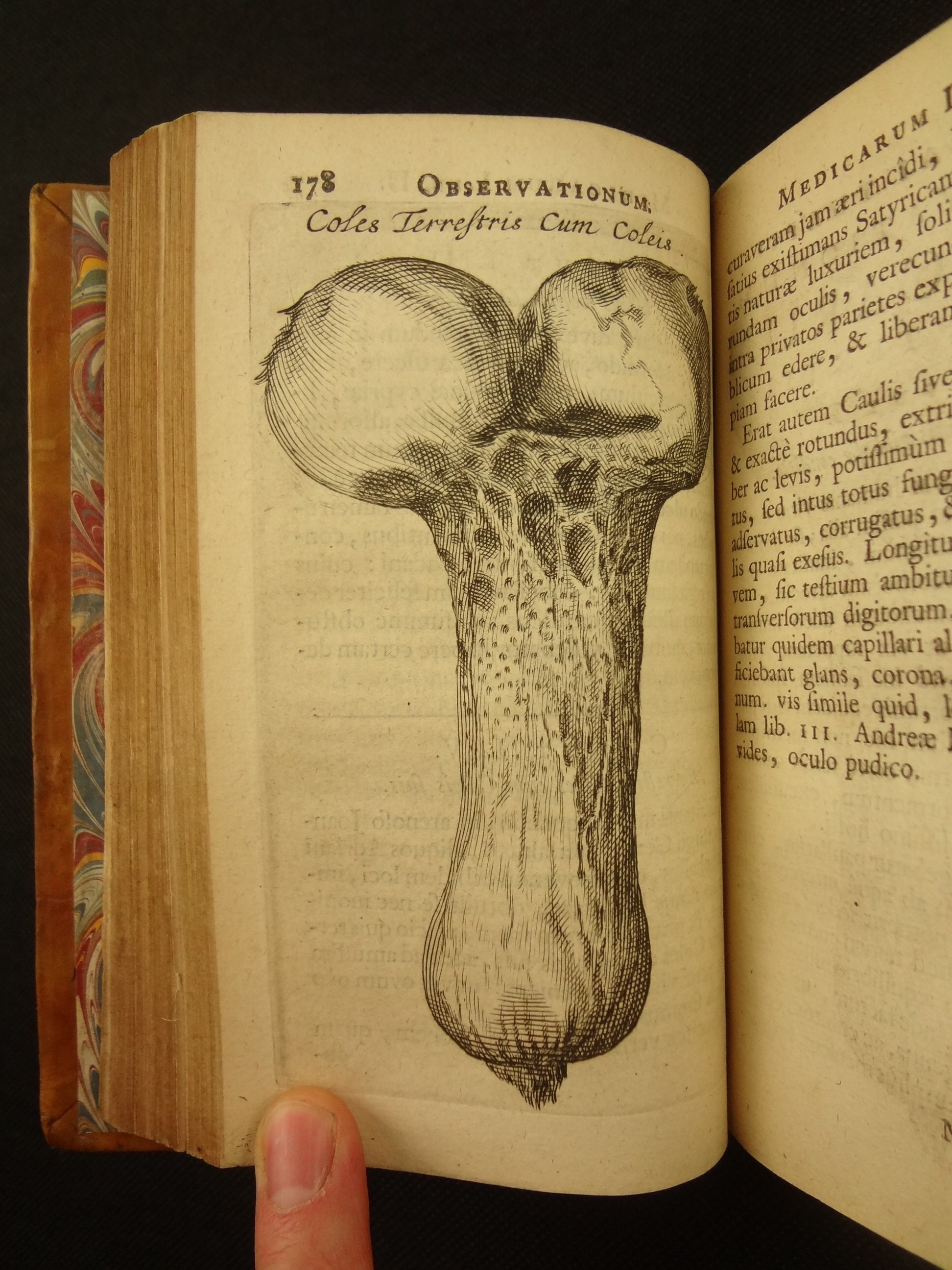 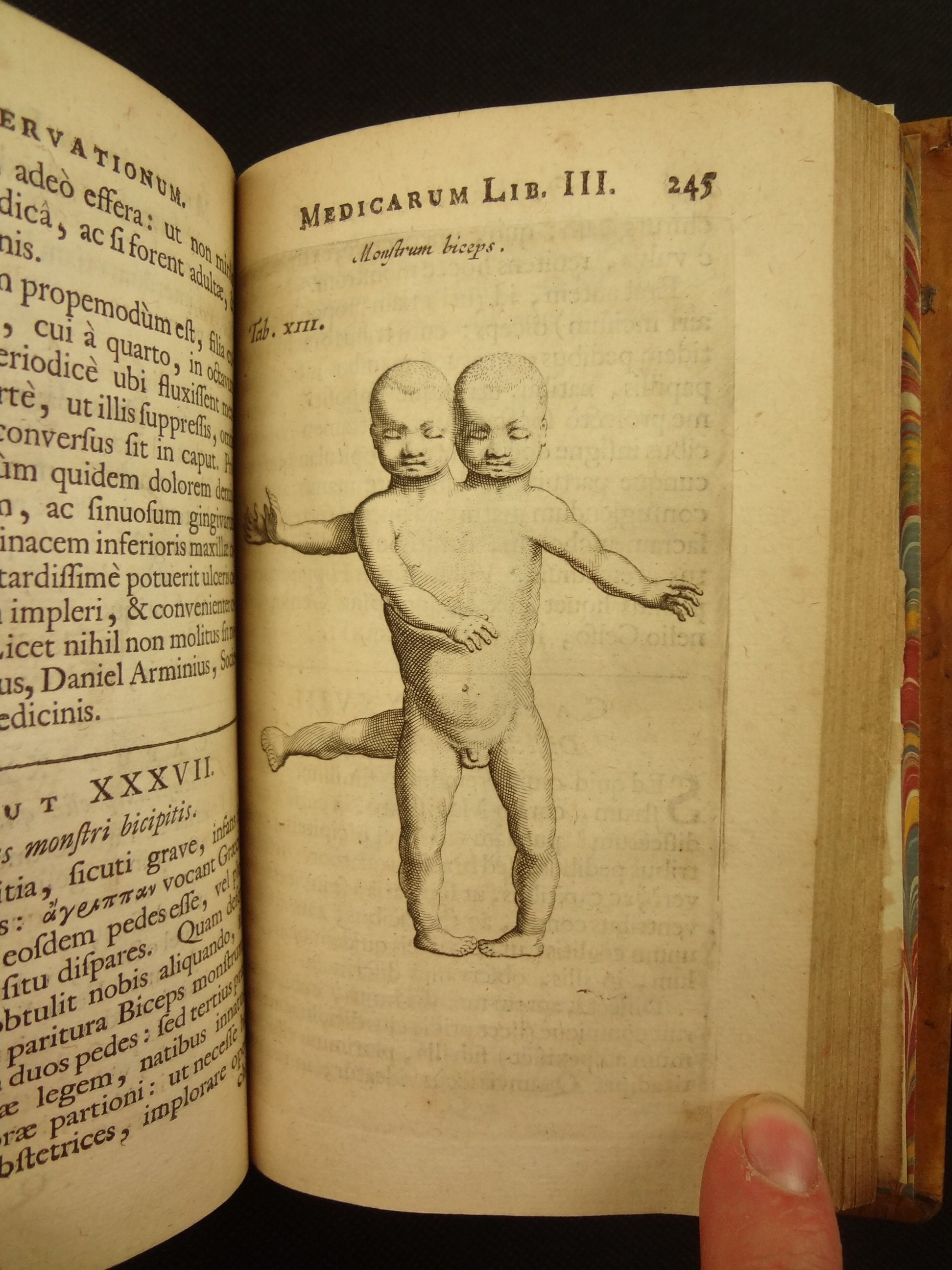 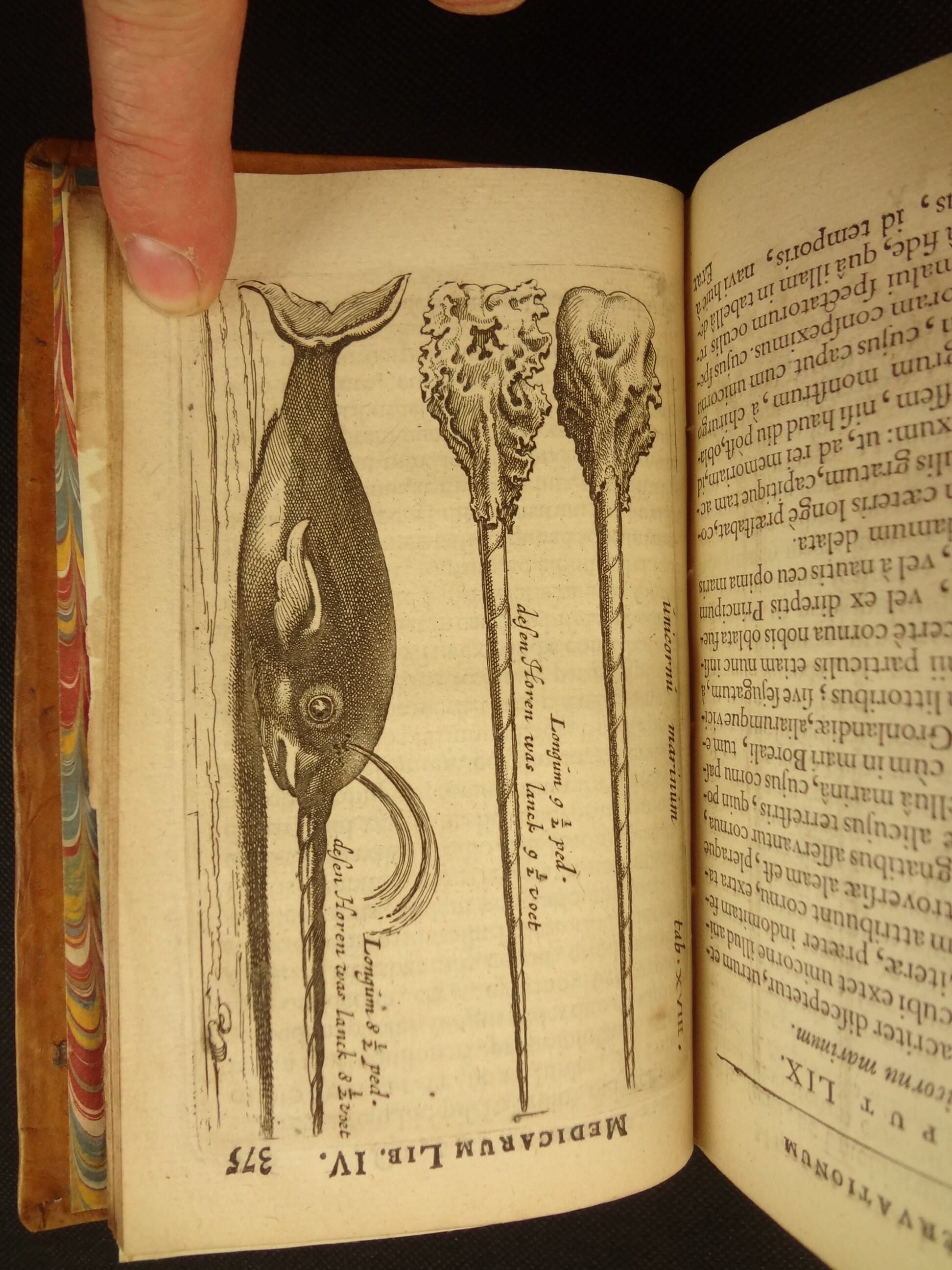 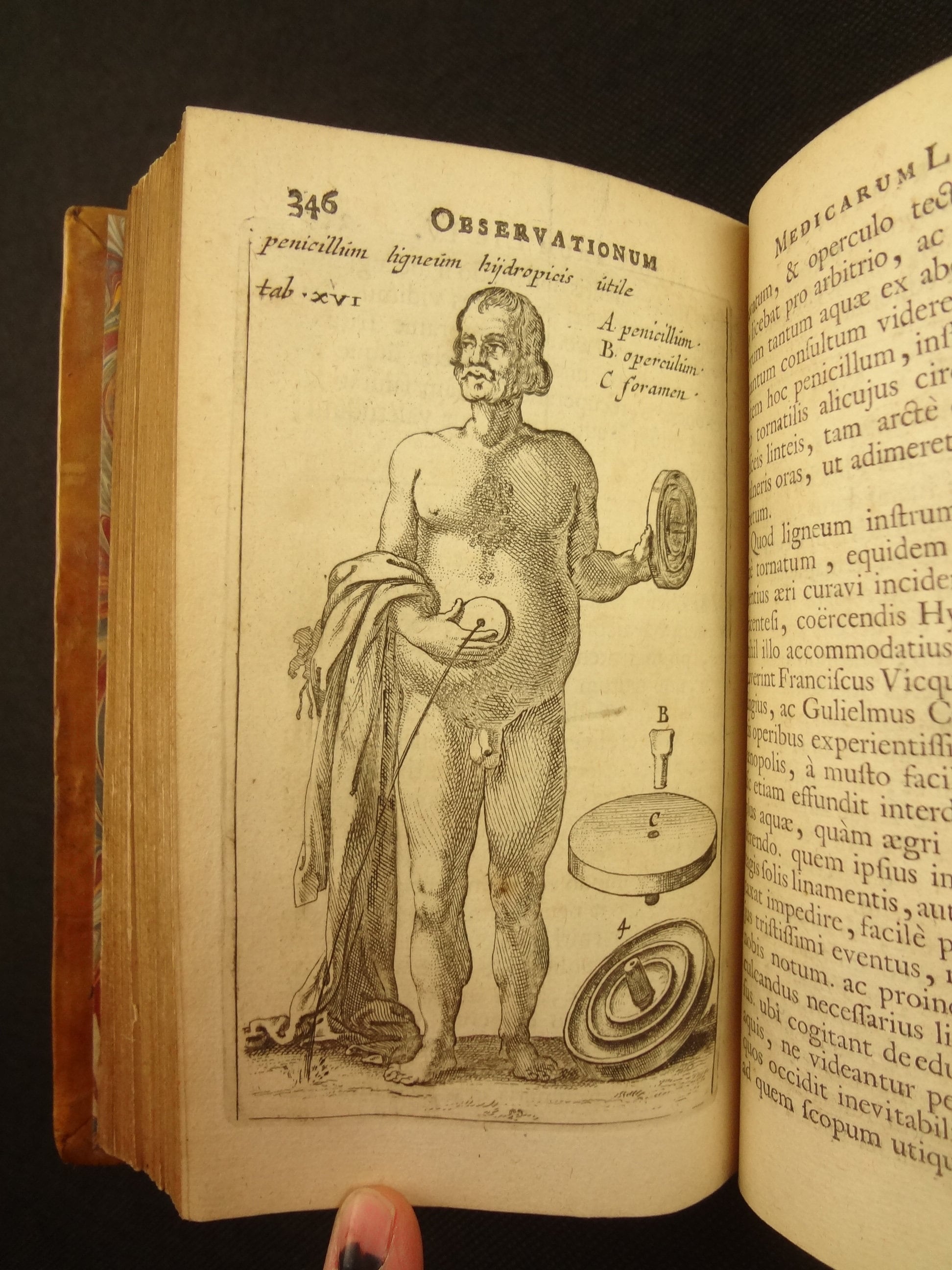 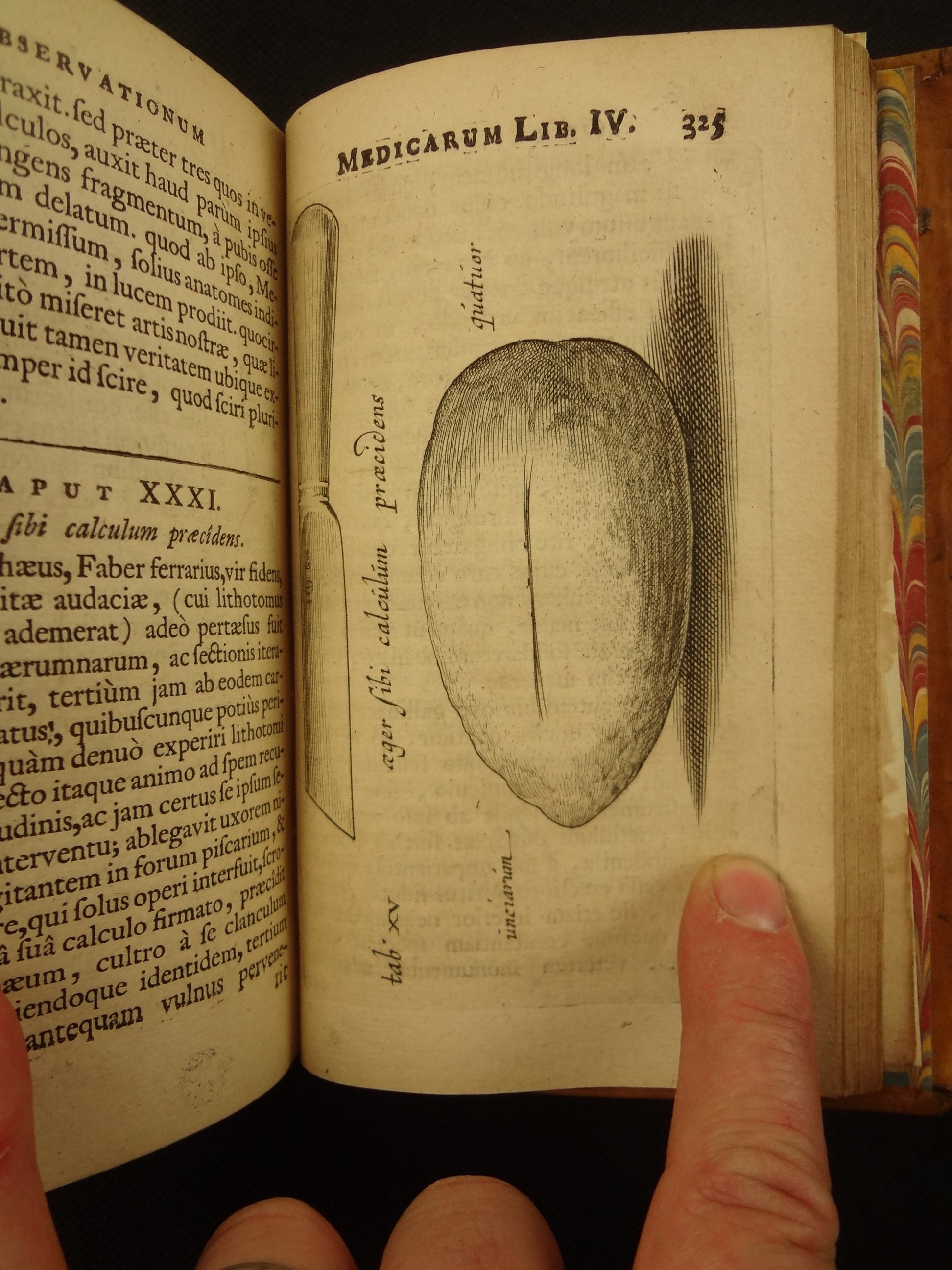 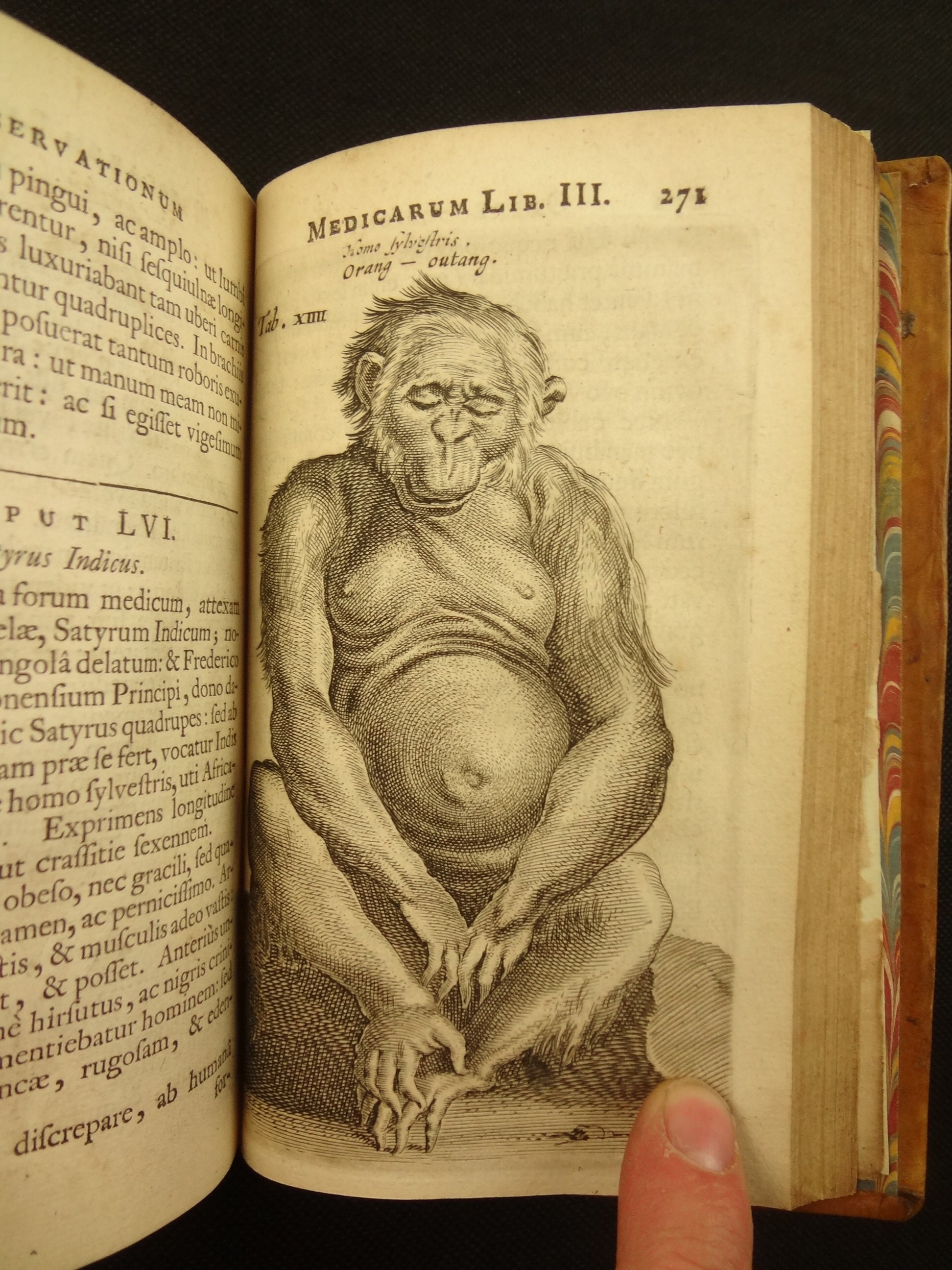 Tulp was at the forefront of renaissance era medicine. He was elected the Praelector Anatomiae of Amesterdam, and famously depicted by Rembrandt in the painting The Anatomy Lesson of Dr. Nicolaes Tulp.

This is the fifth edition (per the title page) of this work, which was first published in 1641. Tulp wanted his work to only be published in the Latin, lest the common people read it and become hypochondriacs. A Dutch edition was finally issued in 1740, translated by Ludovicus Wolzogen.

Tulp's "observations" were varied and interesting, bringing the book great success; for example, Jan de Doot performed a bladder operation on himself and Tulp wrote:

“But this stone, weighing 4 ounces and the size of a hen's egg, was a wonder how it came out with the help of one hand, without the proper tools, and then from the patient himself, whose greatest help was courage and impatience embedded in a truly impenetrable faith which caused a brave deed as none other. So was he no less than those whose deeds are related in the old scriptures. Sometimes daring helps when reason doesn't.”

This work is accredited with being the first book to contain an illustration of an Orangutan, which was quite sensational at its time.

Other cases, with accompanying plates, include: spinal bifida, conjoined twins, Narwhal tusks, among others.

This is an edition of the Latin, as issued by Tulp. It is missing its frontis illustration, and page 191/2 (which included a plate of Calculus Vesica). The other nineteen plates are present (Tulp's 1st edition had twenty plates), although two are not numbered (testicles, and conjoined twins).

See pictures. Calf binding is fresh, but they used older marbled endpapers to tie the binding into the work. Some rubbing to boards and corners and one pin hole near top corner of front board.

Graphite price erased from verso of flyleaf. Title page: name trimmed at top edge and 3 cm. hole at gutter. Small brown spot at fore-edge margin. A little toning throughout the text block. Occasional fox spot, dog ear. Possibly washed, quite clean with the occasional smudge of ink at text (or the printer was a little loose with the type). Missing frontis plate (signature A1). P. 117 corner tear, no text affected. Page 191/192 missing, which is plate "IX", showing "Calculus Resica". 2 cm. tear at bottom of 327, no text affected. The last two blank endpapers have chipped edges.