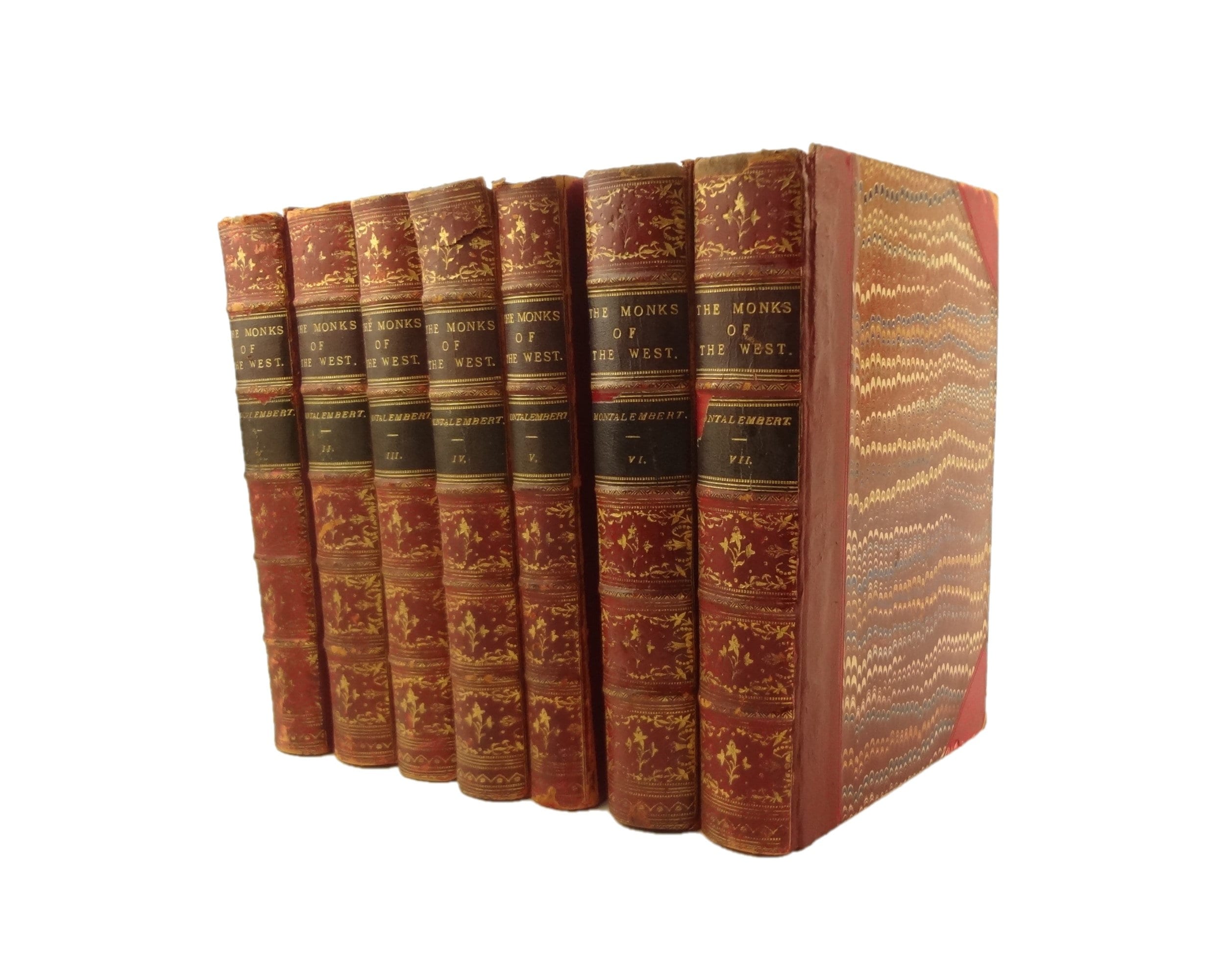 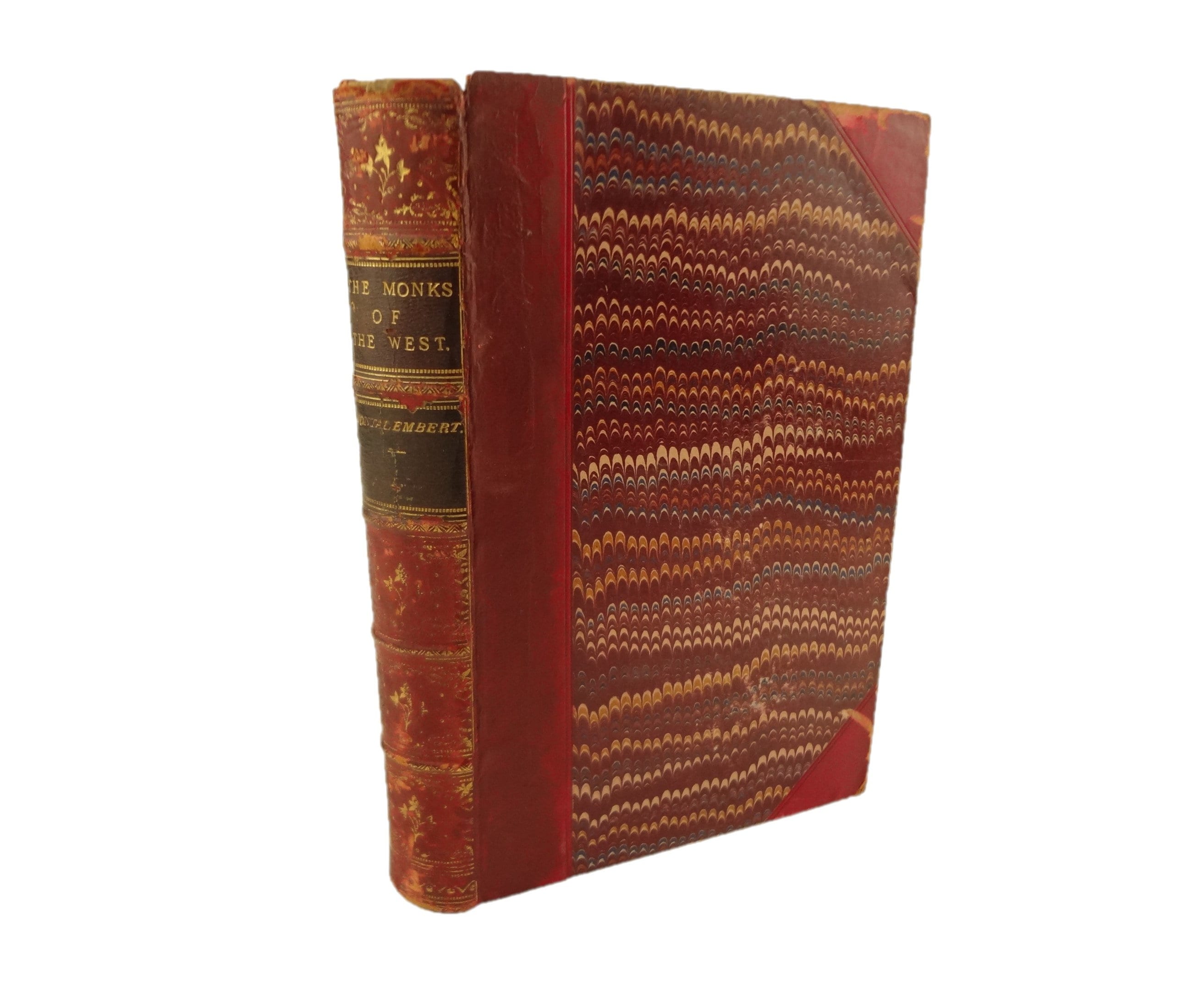 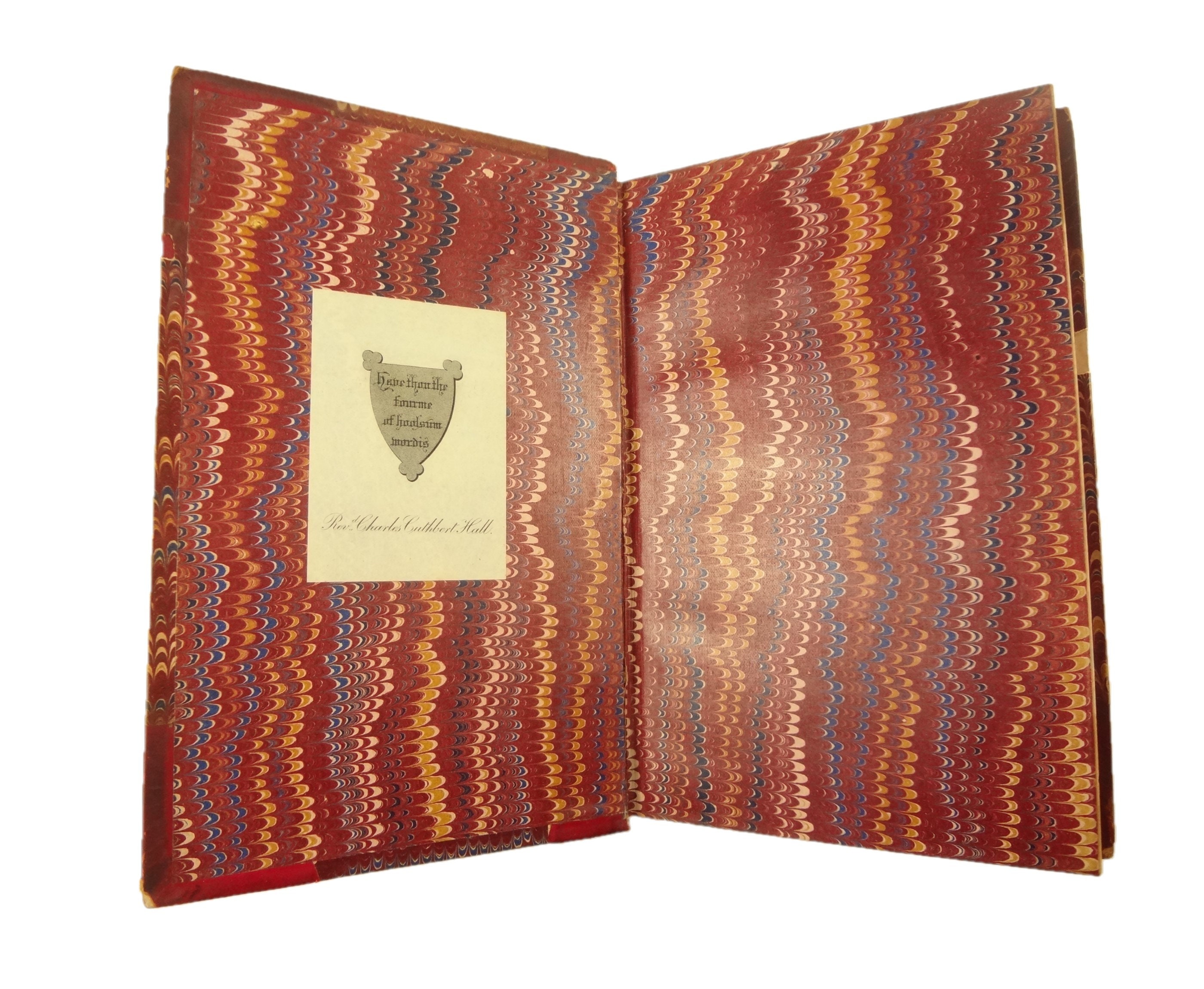 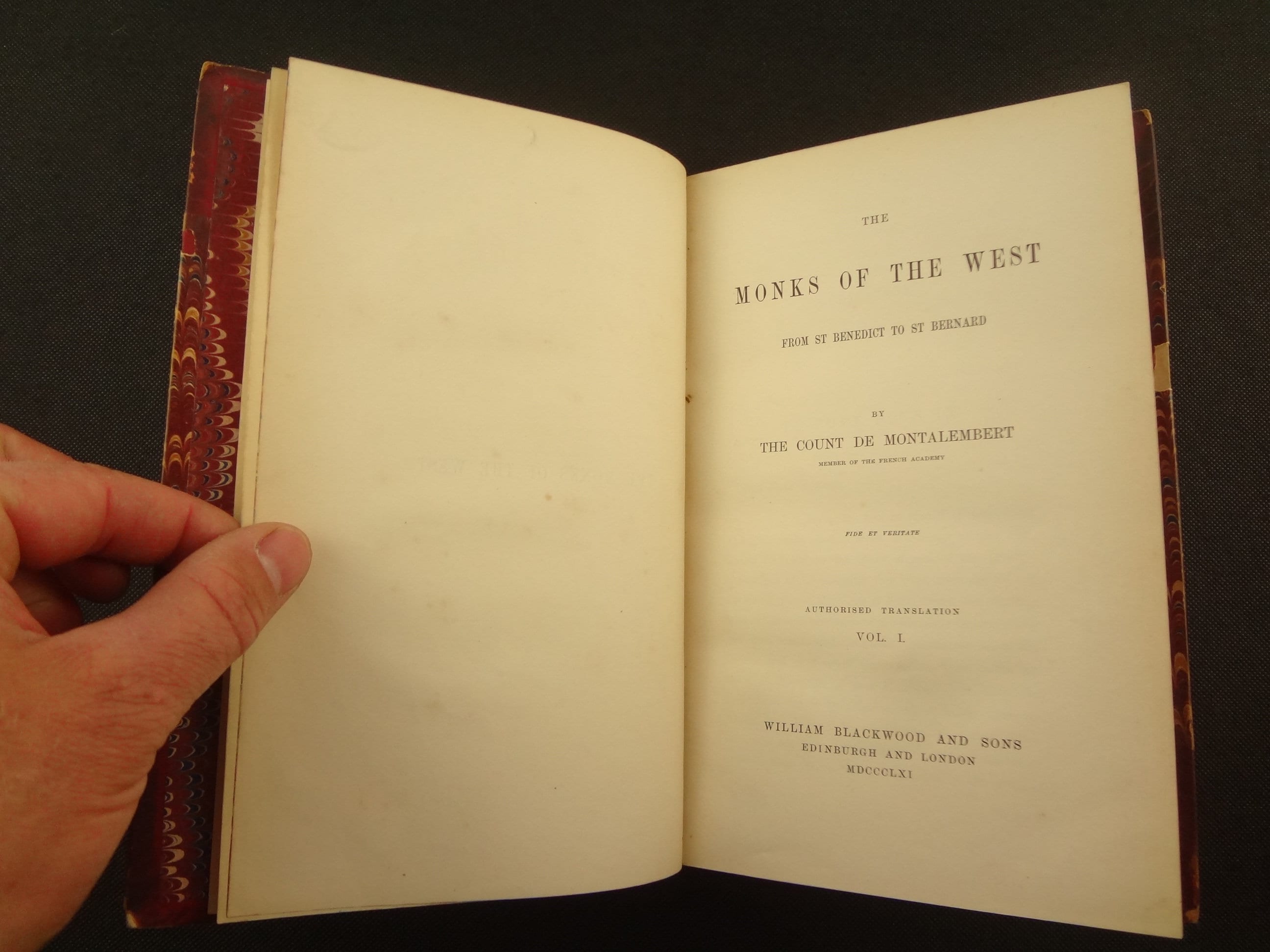 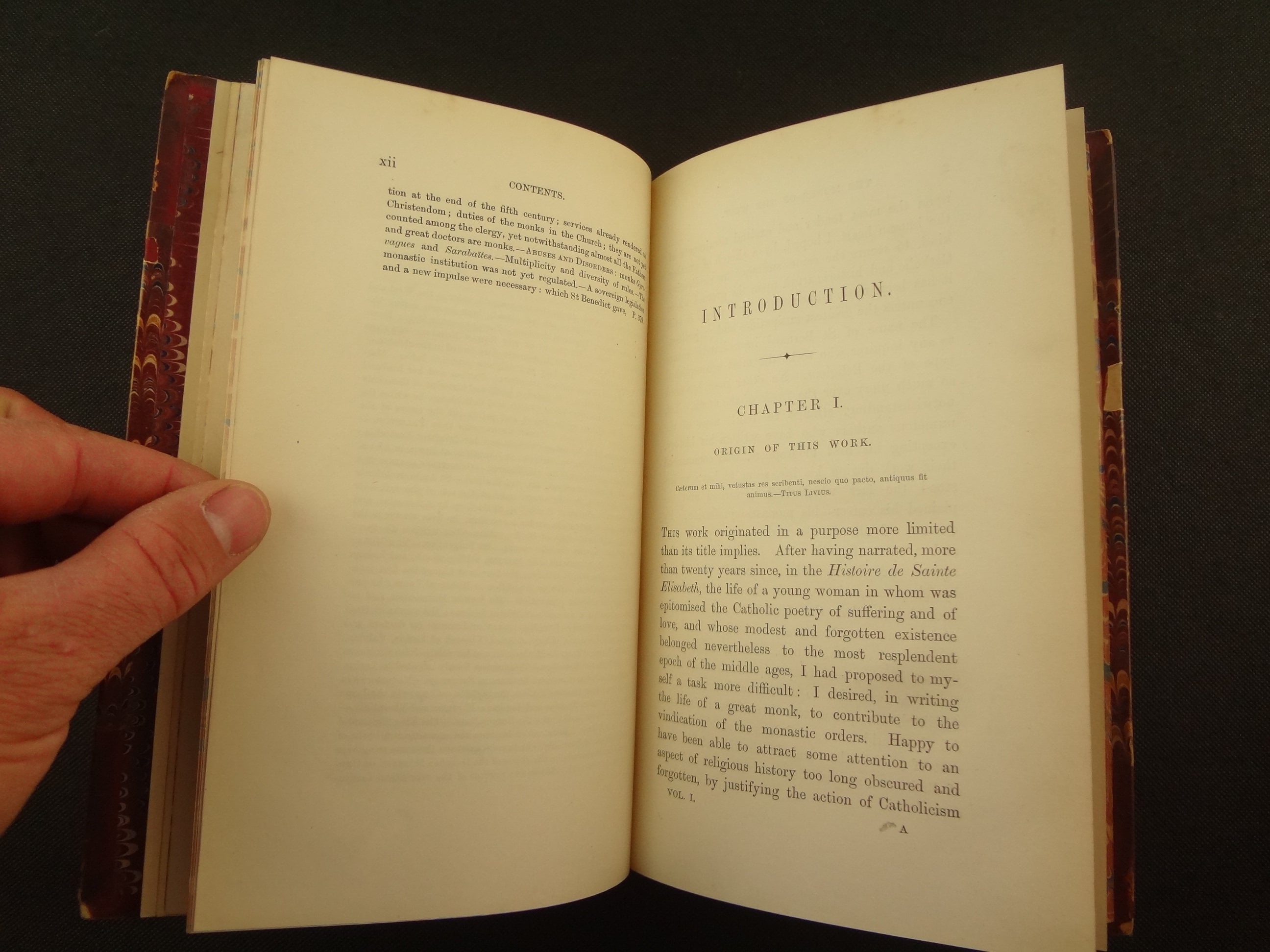 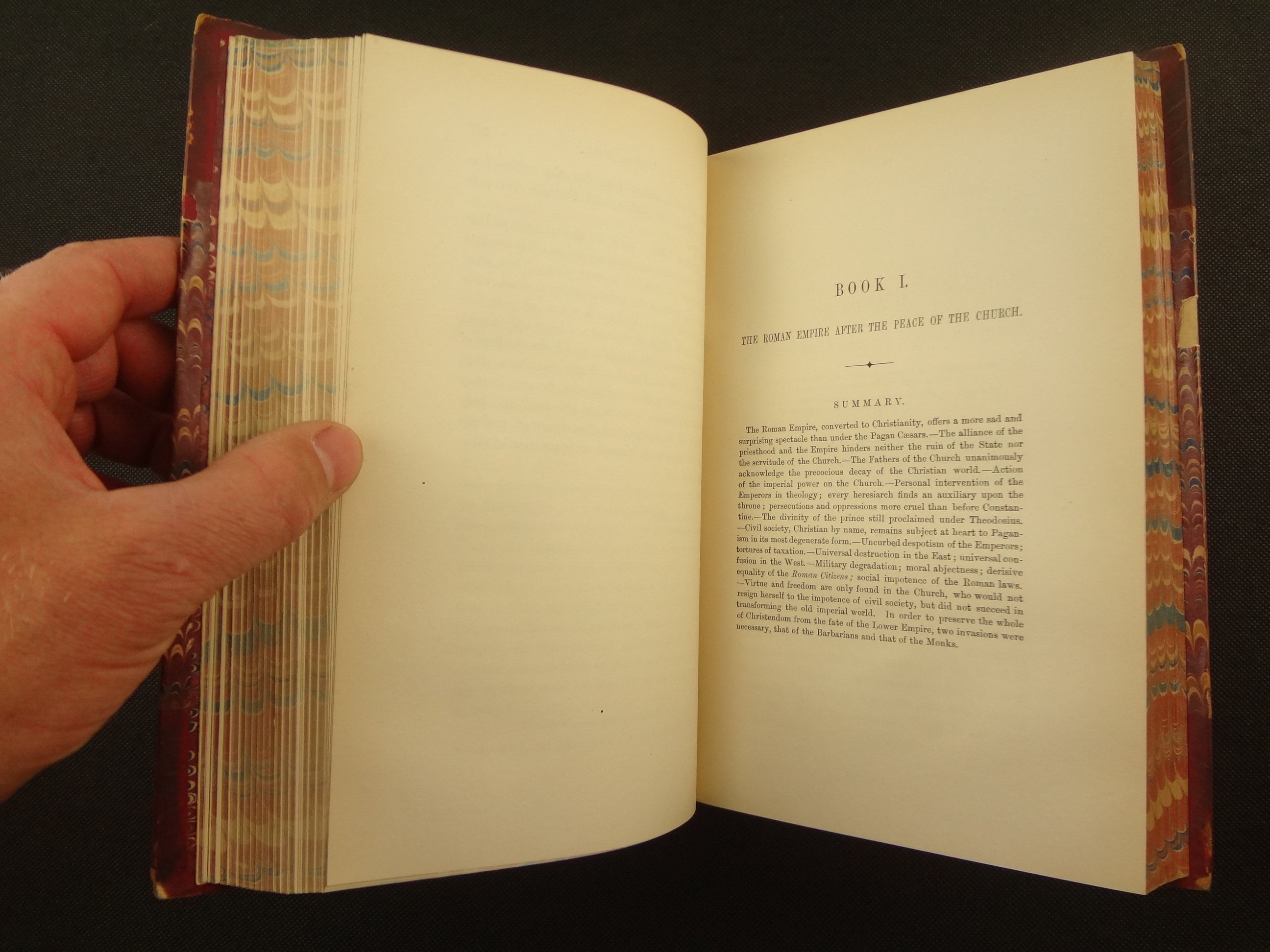 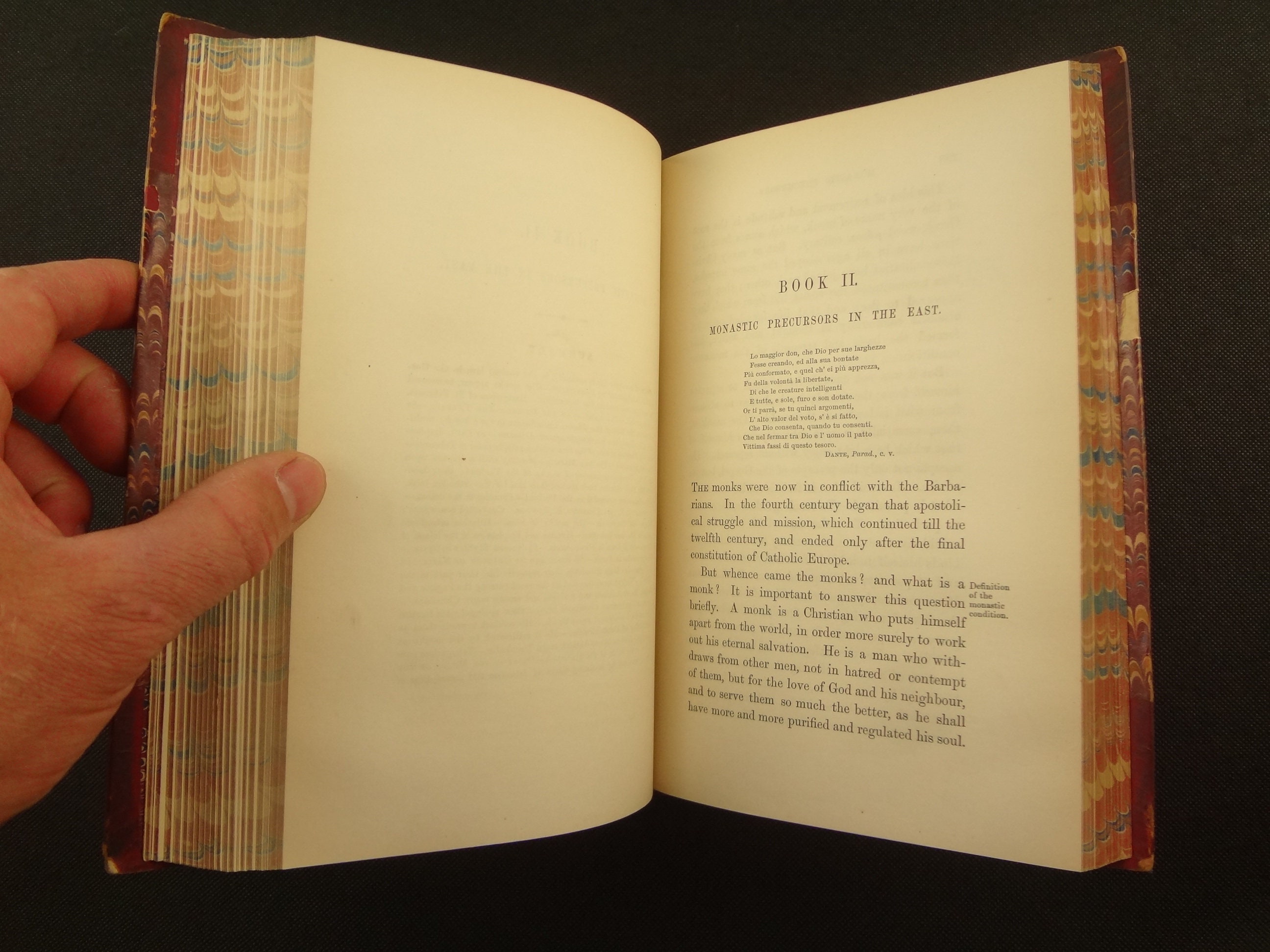 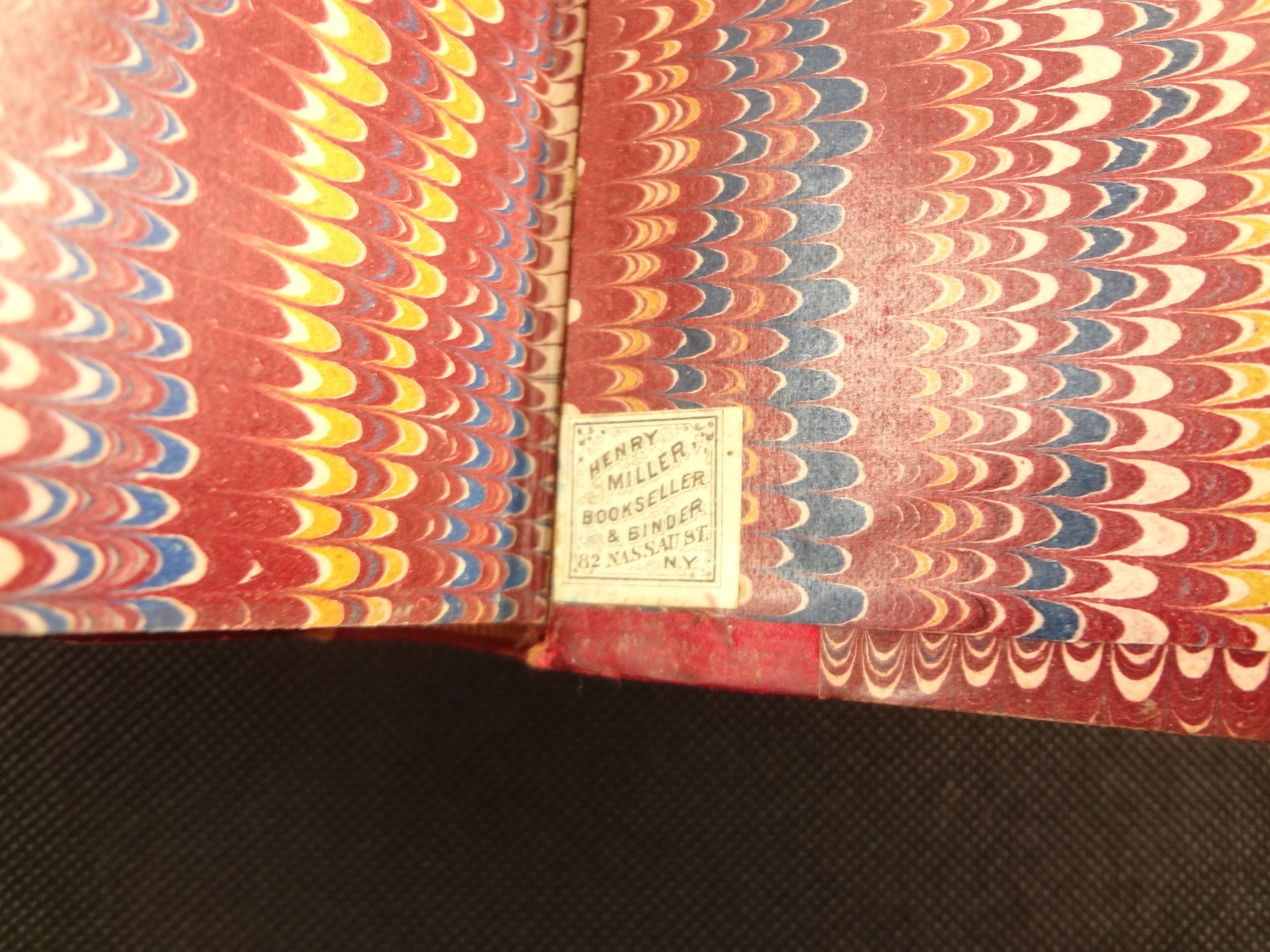 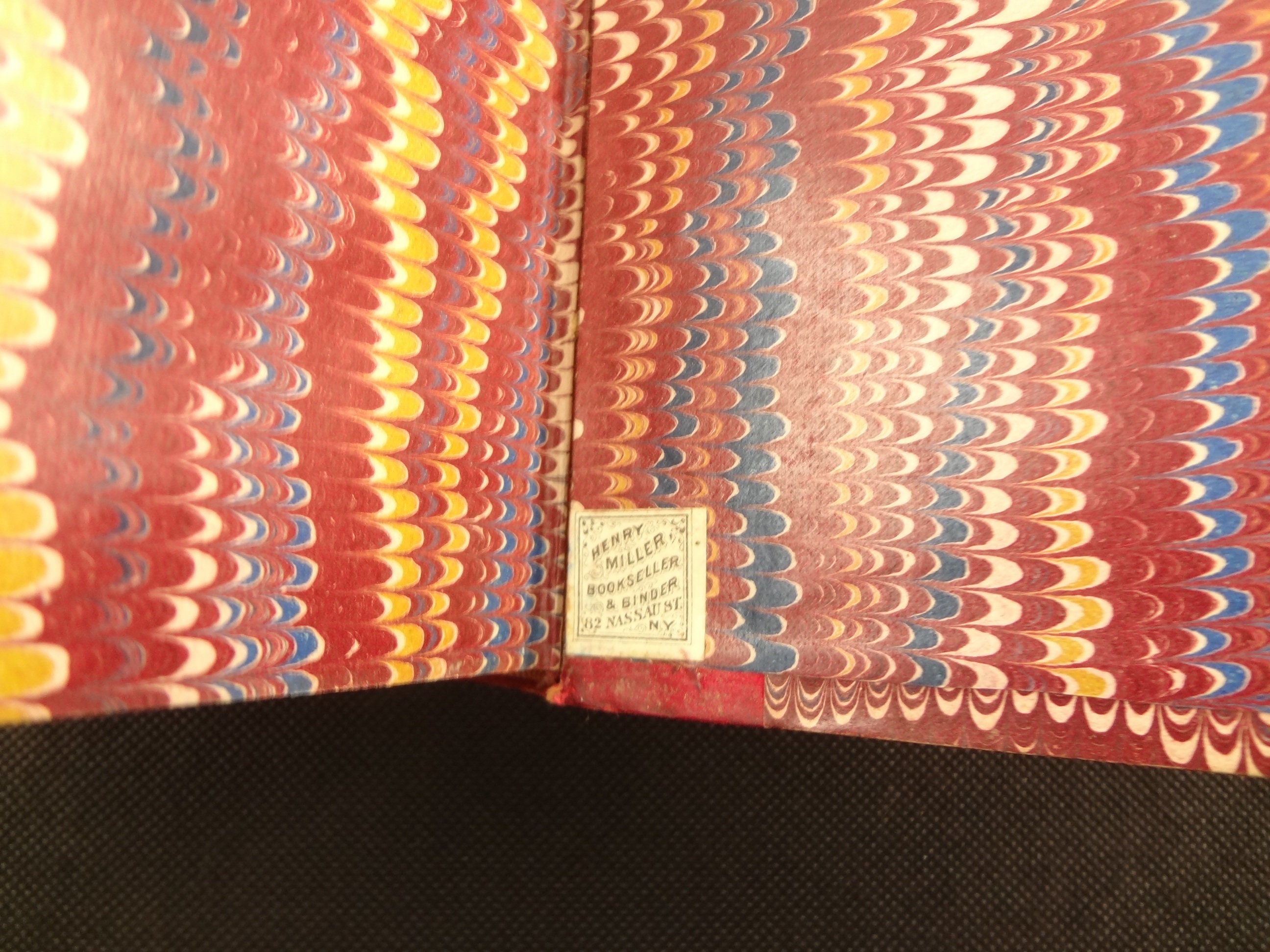 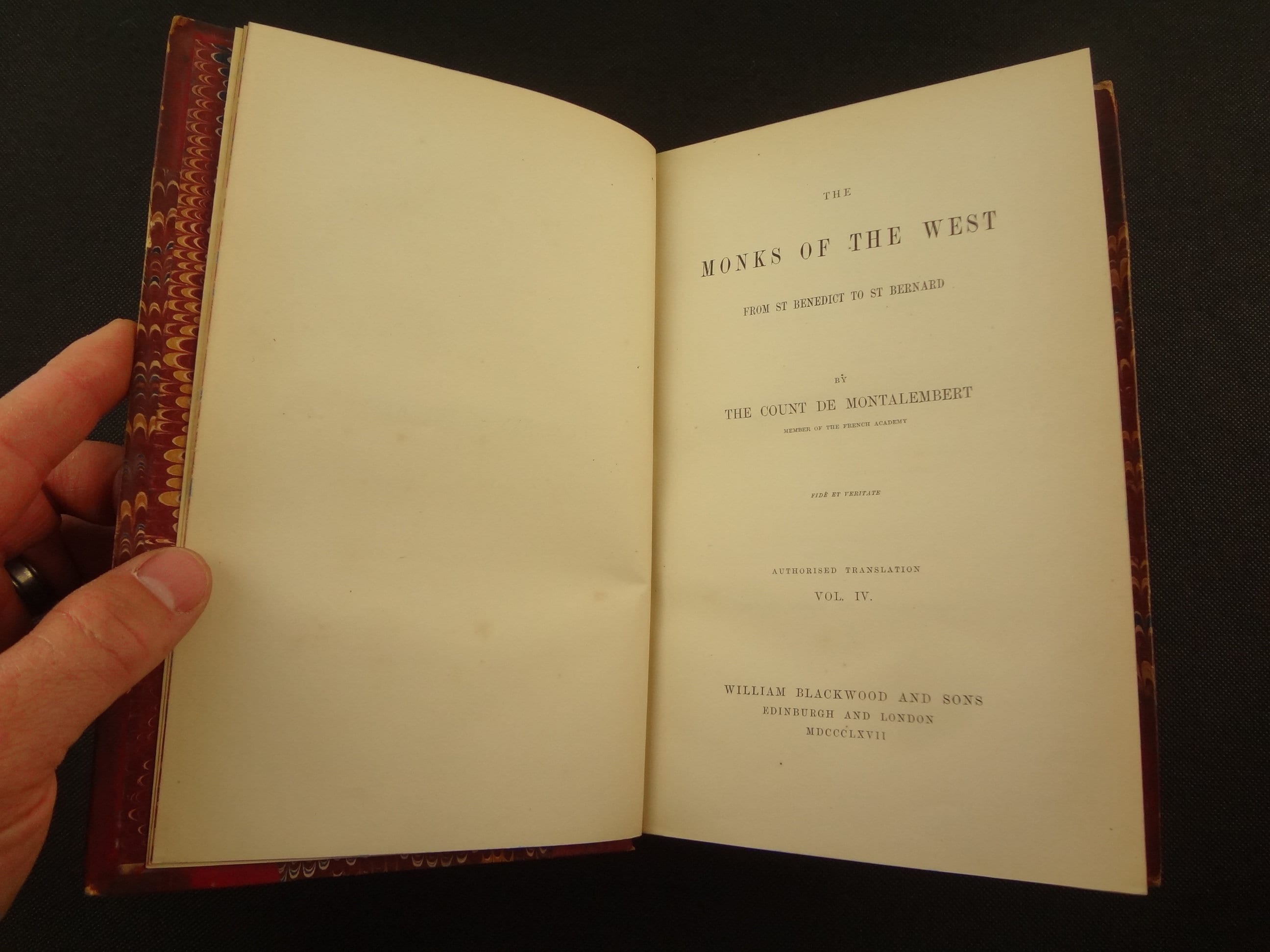 1861 to 1879, complete set of Monks of the West by Count de Montalembert. Printed by Blackwood & Sons in seven volumes.

A hard-to-find set, complete in seven volumes (they were published between 1861 and 1879), documenting the lives of the saints from St. Benedict (6th century) to St. Bernard (12th century), translated from the French of the author, Montalembert. The author died before completing the task he set to, so volumes six and seven were collated from his notes and papers post mortem.

"In addition to being an eloquent orator, Montalembert wrote in a style at once picturesque, fiery and polished. He was an ardent student of the Middle Ages, but his medieval enthusiasm was strongly tinctured with religious sentiments. His first historical work, La Vie de Ste Elisabeth de Hongrie (1836), is not so much a history as a religious manifesto, which did much to restore the position of hagiography. It met with great success, but Montalembert was not elected a member of the Académie française until 1851, after the fall of the July monarchy."

"From this time he gave much of his attention to a great work on monasticism in the West. He was at first attracted by the figure of St. Bernard and devoted one volume to him. He later withdrew it on the advice of his friend Dupanloup, and the entire printing was destroyed. He then enlarged his original plan and published the first volumes of his Moines d'occident (1860), an eloquent work which was received with much admiration in those circles where language was more appreciated than learning. The work, unfinished at the time of the author's death, was completed later from some long fragments found among his papers. Volumes VI and VII appeared in 1877." - Wikipedia

Our editions are the first English editions.

Ex libris plate of Rev. Charles Cuthbert Hall, president of Union Theological Seminary in New York. This explains the New York binder ticket, and possibly hints at his draw (Saint Cuthbert?), although I'm sure a man of the cloth could have more motivation to own the set. He held three Doctorates of Divinity, from the University of New York, Harvard, and Yale!

Each volume measures approx. 22 x 14 x 3 cm, octavo. Marbled paper covered boards, with the spine and corners leather. All edges marbled. Mabled endpapers. Spines with five raised bands; four compartments with a central floret in gilt, the other two with the title, author and volume number in gilt on black morocco. Seven volumes. No complete collection of seven volumes recorded in OCLC.

Occasional foxing and toning of pages throughout. Note, "ahns 7 vols" on back of flyleaf. Ticket of "Henry Miller Bookseller & Bookbinder 82 Nassau St. NY" at rear pastedown. I don't see any annotations or tears in the text. I may have missed a dog-ear or edge chip somewhere in the seven volumes, I'd be lying if I said I looked at every page. An interesting set, hard to find complete, and although it shows some of the wear of time, it is still entirely readable and usable as a reference, with a pleasing look of antiquity.