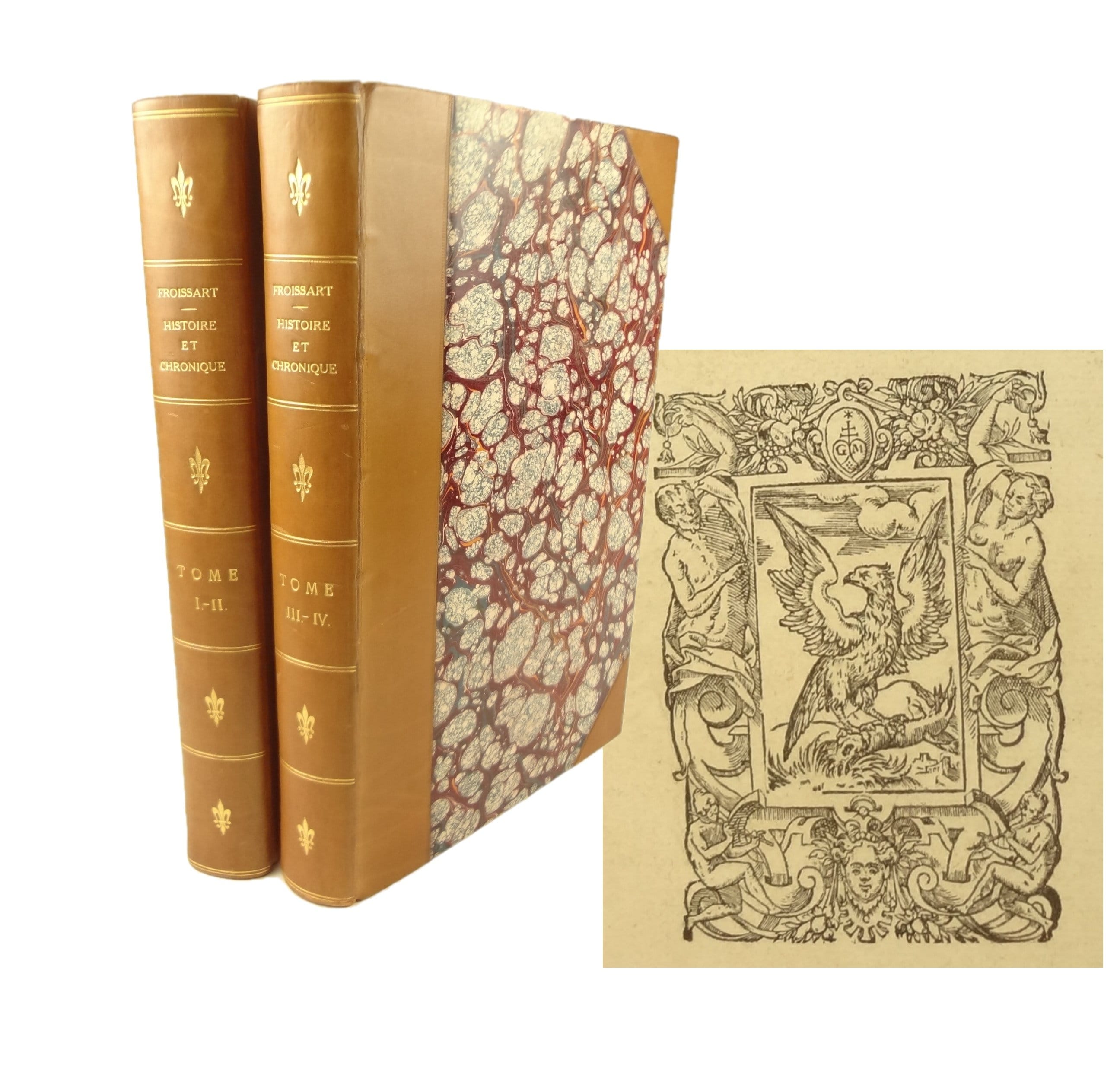 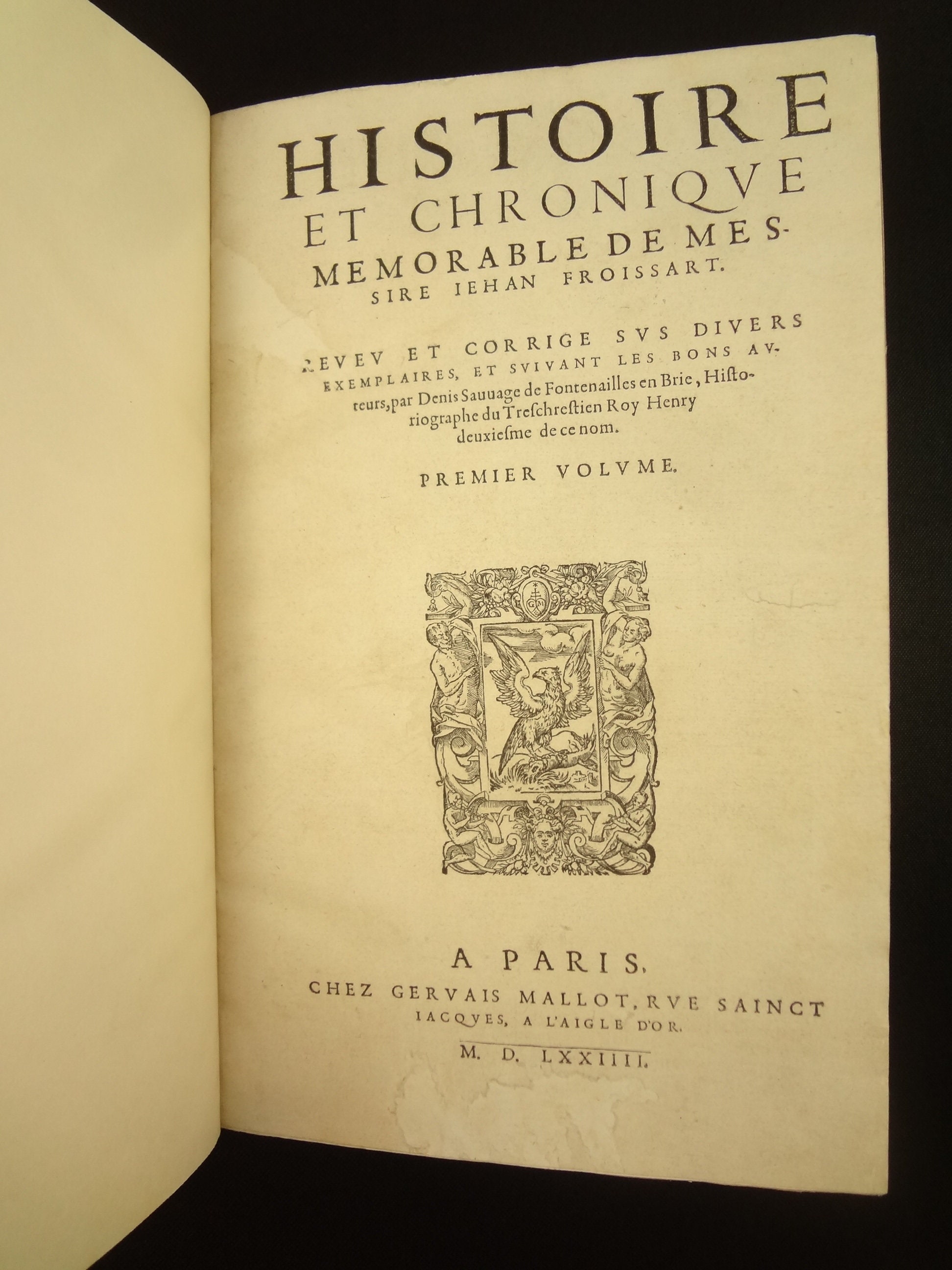 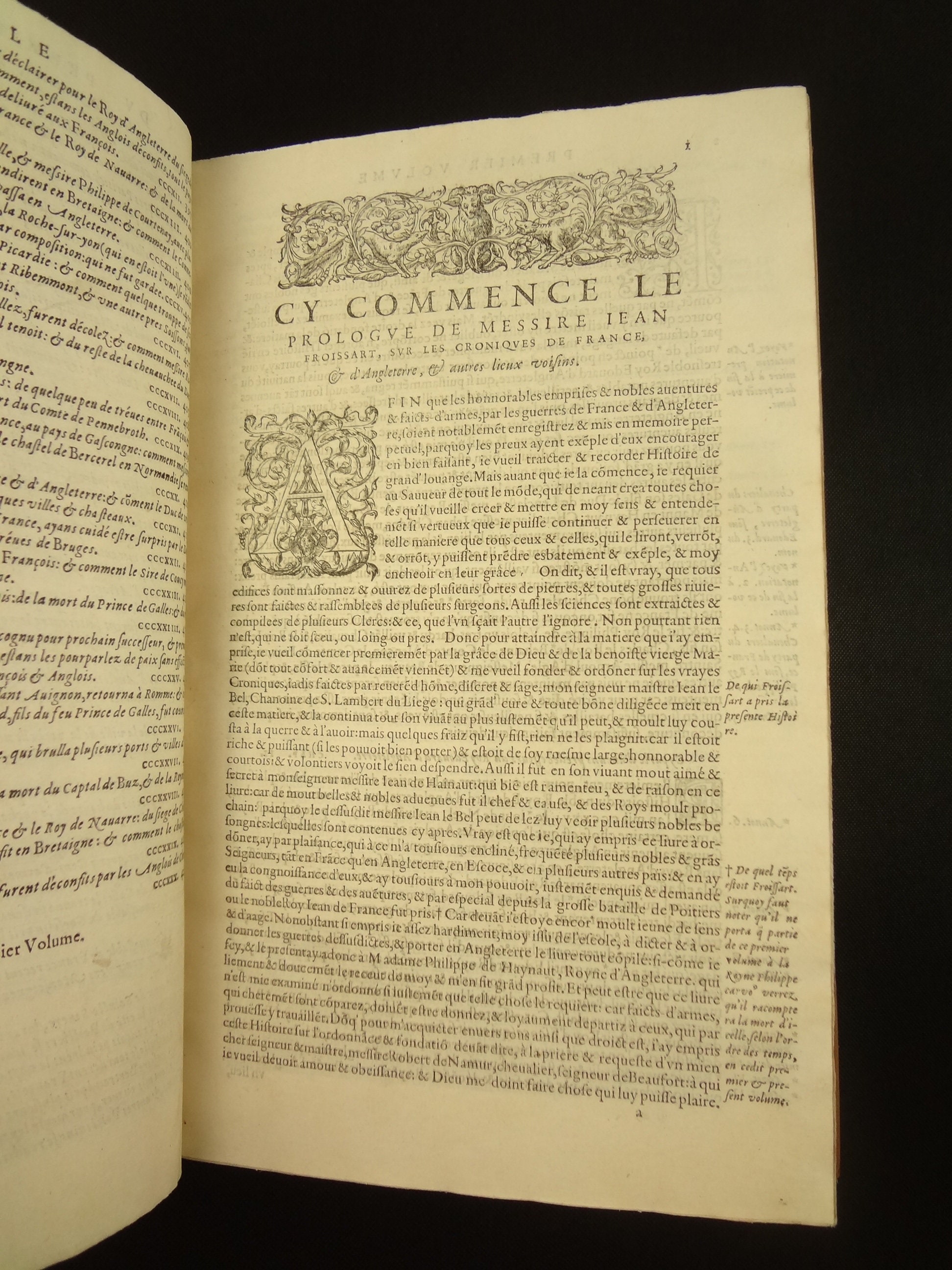 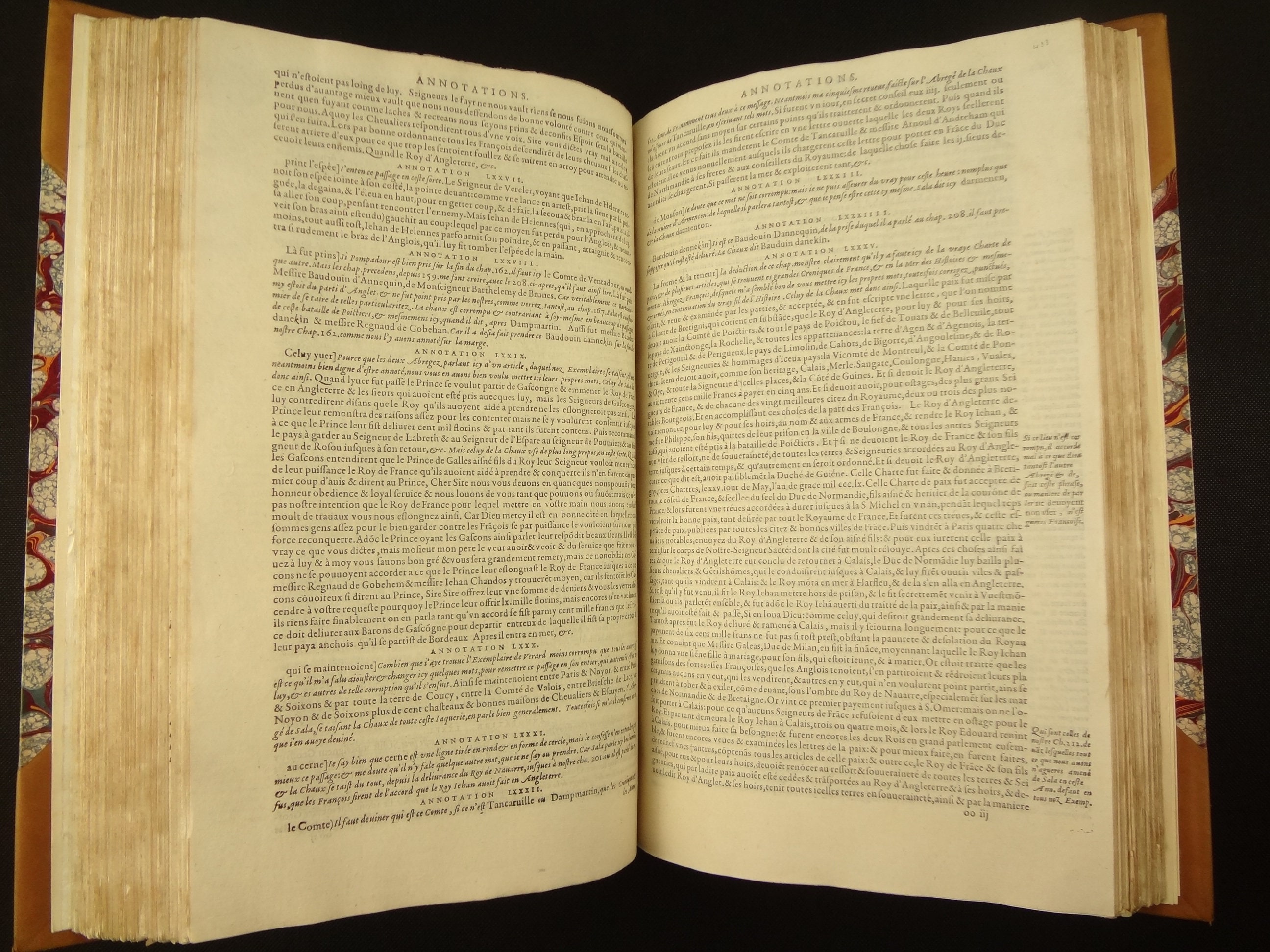 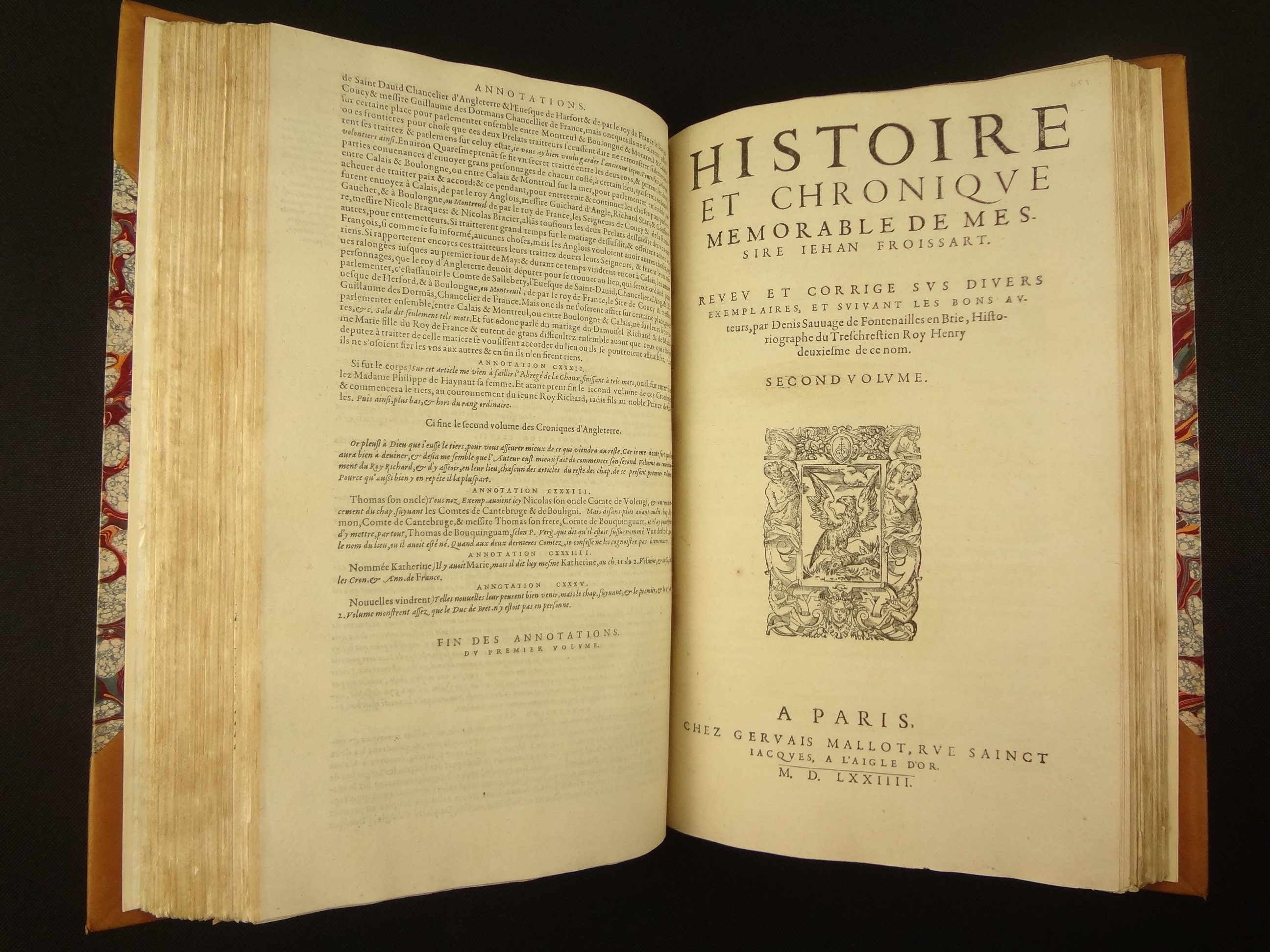 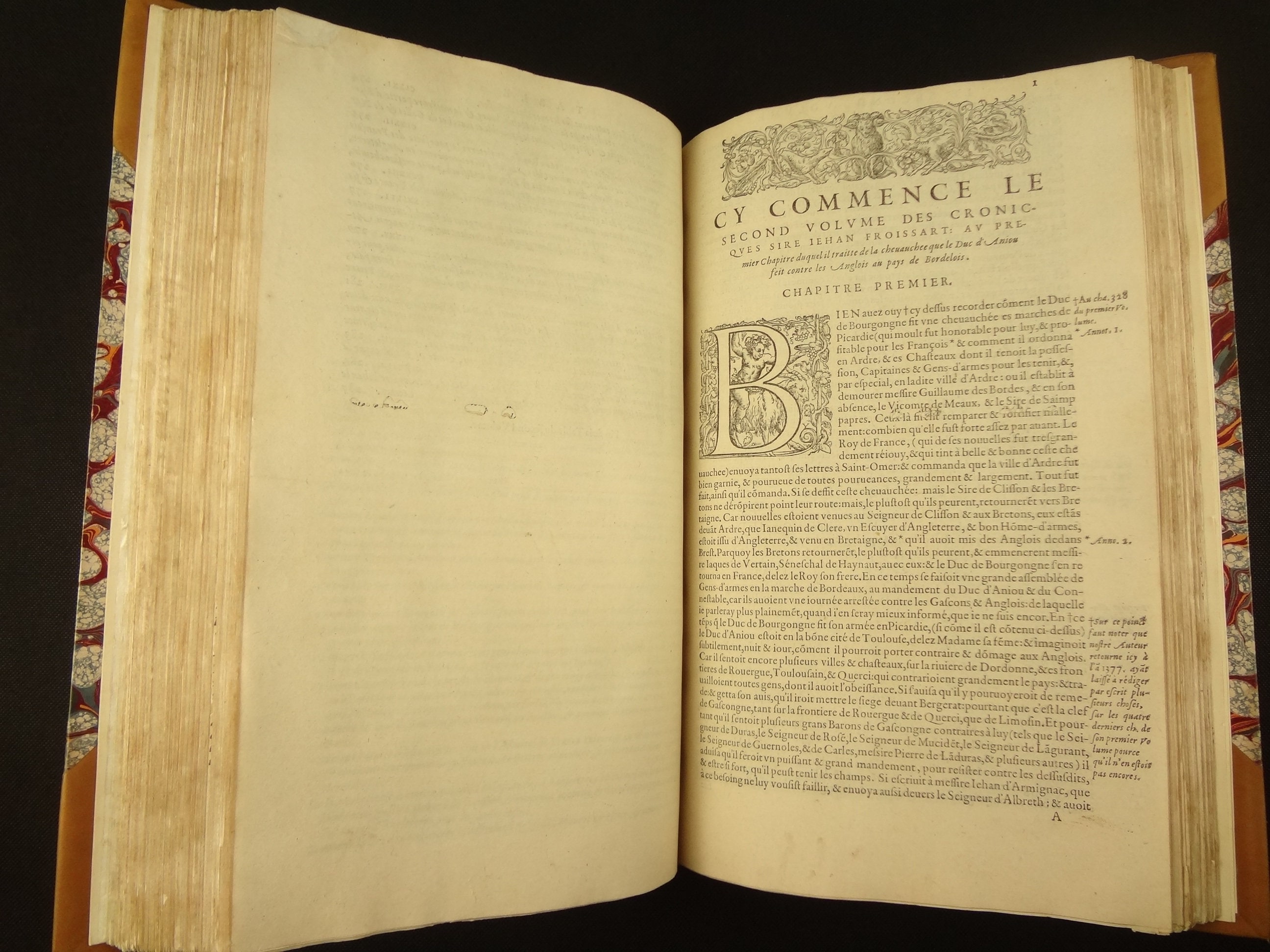 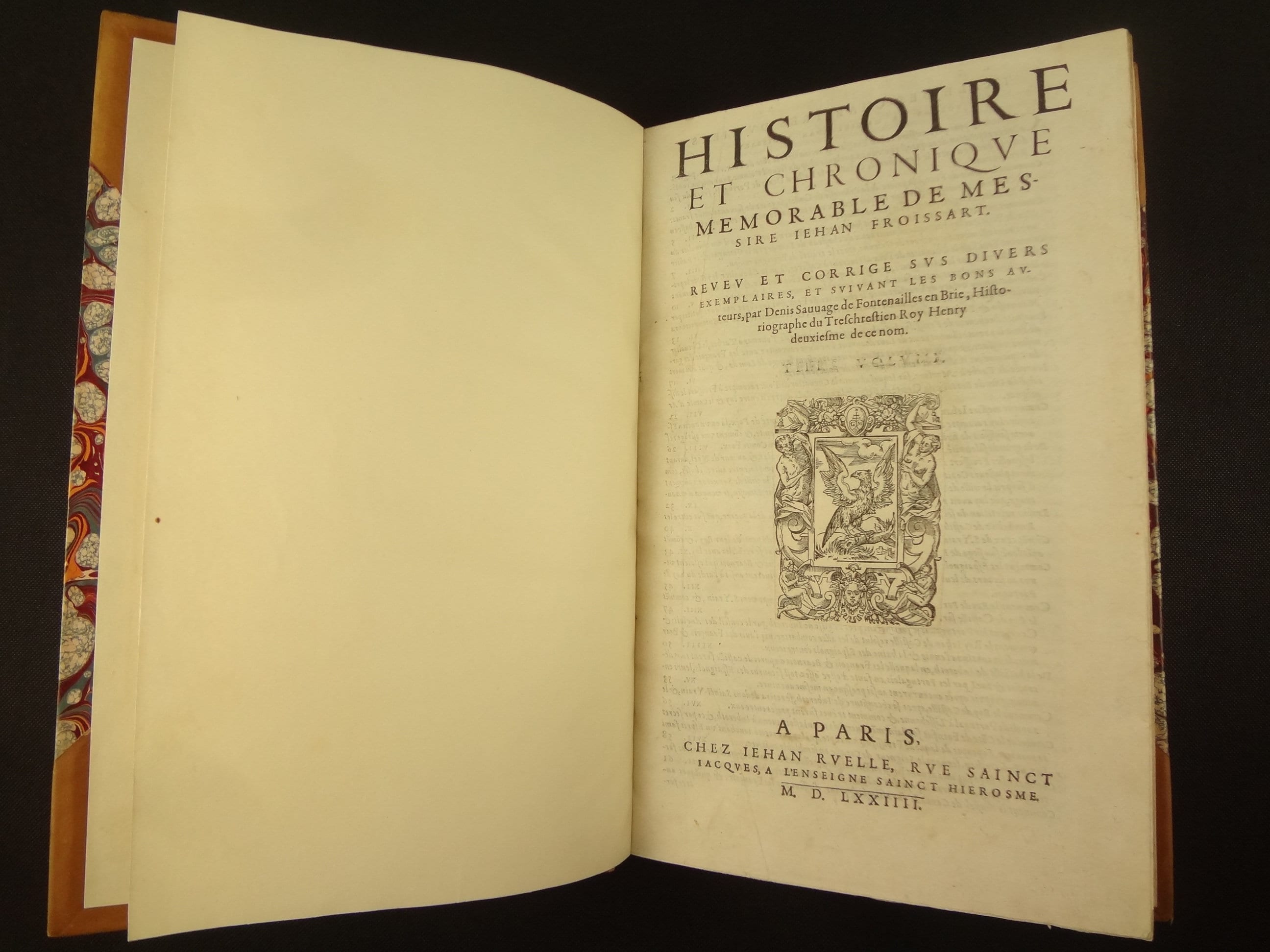 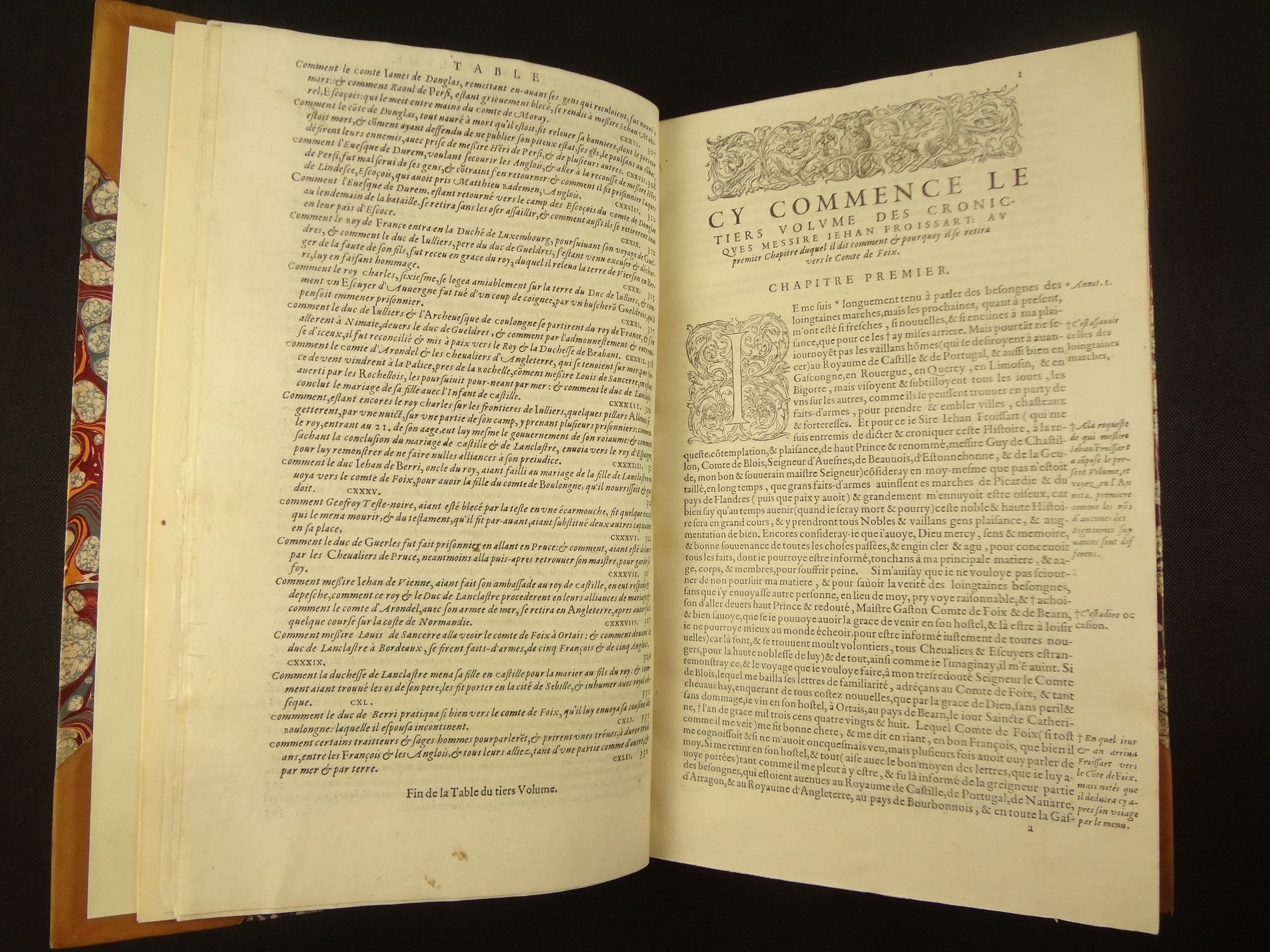 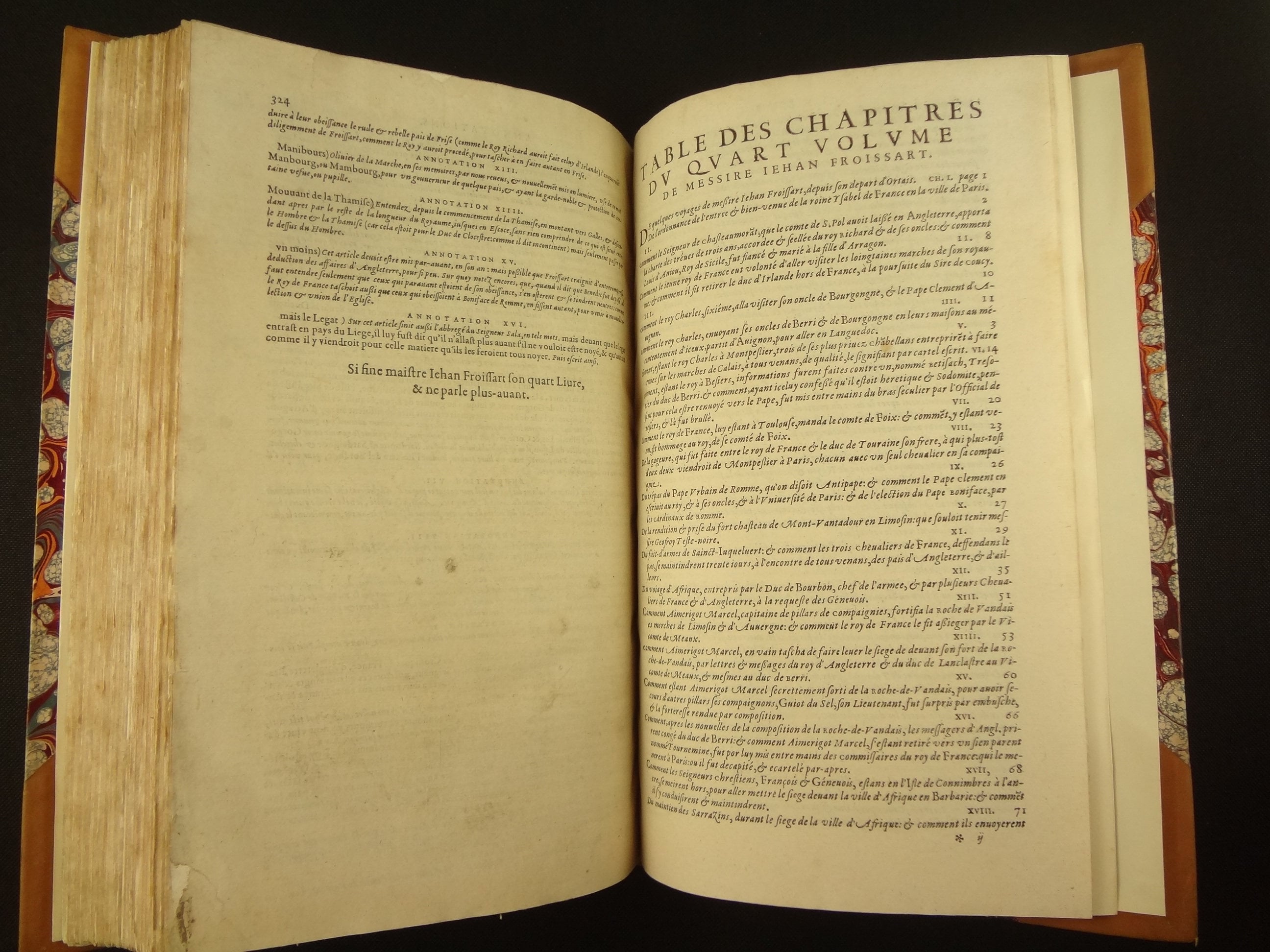 There's a fascinating 16th century mystery here that I've not fully fleshed out. I've found four Paris printers (L'Huillier, Sonnius, Mallot & Ruelle) who all issued this same book in 1574, with only printer and their device changing on the title pages.

Recently, I listened to a University of Oxford podcast on the Frankfurt Book Fair; books brought to the fair had to be a new edition for the printer. There are a number of ways researchers have found printers evaded this rule. Perhaps, attributing many printers to this Froissart was a way to get many Paris printers into the Book Fair? This is just wild conjecturing, but there is certainly a story to why a number of printer's claimed this work. Interesting, the copy residing at the Austrian National Library, published by L'Huillier, has layout lines throughout it.

I believe this copy was restored. There are some very well-done repairs to volume one's title page. It seems washed, because it is clean and a few of the pages seem a little light (in regards to ink). Also, there is an infill where the correct text is used, and (in volume three) two pages of the same text (I think the repairer wanted to put the next page, but made a mistake), leading me to believe a second copy was used to "tune-up" this copy.

Froissart's Chronicles are a prose history of the Hundred Years' War written in the 14th century by Jean Froissart. The Chronicles open with the events leading up to the deposition of Edward II in 1326, and cover the period up to 1400, recounting events in western Europe, mainly in England, France, Scotland, the Low Countries and the Iberian Peninsula, although at times also mentioning other countries and regions such as Italy, Germany, Ireland, the Balkans, Cyprus, Turkey and North Africa.

For centuries the Chronicles have been recognized as the chief expression of the chivalric culture of 14th-century England and France. Froissart's work is perceived as being of vital importance to informed understandings of the European 14th century, particularly of the Hundred Years' War.

See pictures. Recent binding (but not new), and to quote the inscription on the flyleaf, "a fine clean set". Still, a little wear along bottom edges of boards. Some toning to leather at edges. A little dust to the top edge. Endpapers were renewed with the binding, so they look very clean. Turn-ins have ghosted flyleaf.

Volume one: Bookseller notes on verso flyleaf (L880, Scarce, Fine clean set, etc.). Title page repaired at gutter and bottom edge, well done repairs; "R" in "Revev" affected (see picture). Text block looks washed to me, it is quite clean. Wormhole in leaves a ii to a viii (Table of contents). Occasional toning to pages. V1 p21/22 missing. Top edge trimmed tight, into headings sometimes. Ink thumb bottom margin v1 p81. Occasional chip to fore-edge in all volumes. When the binding trimming clips the page number, at the top of the leaf, someone wrote it in in pencil at top-edge in all volumes. Occasional fox spot throughout, but not common. V1 p185 repaired very well. V1 327/28 trimmed into fore-edge margin notes. Ink smear V1 361. 4 cm x 1 cm cut at top edge of V1 p415, no text affected (likely stolen from margin for a repair elsewhere).

Volume two: Worming from the 2nd leaf of V.2 through p. 15. The number of the edition, in all the volumes, is rubbed, and the second volume someone has pasted "second" over where second was rubbed out.

Volume four: Repair to edges of V4 p. 323/24. There might be a blank page missing between the end of the Annotations and the Table of Chapters at the rear of the fourth volume (no page with signature *i)