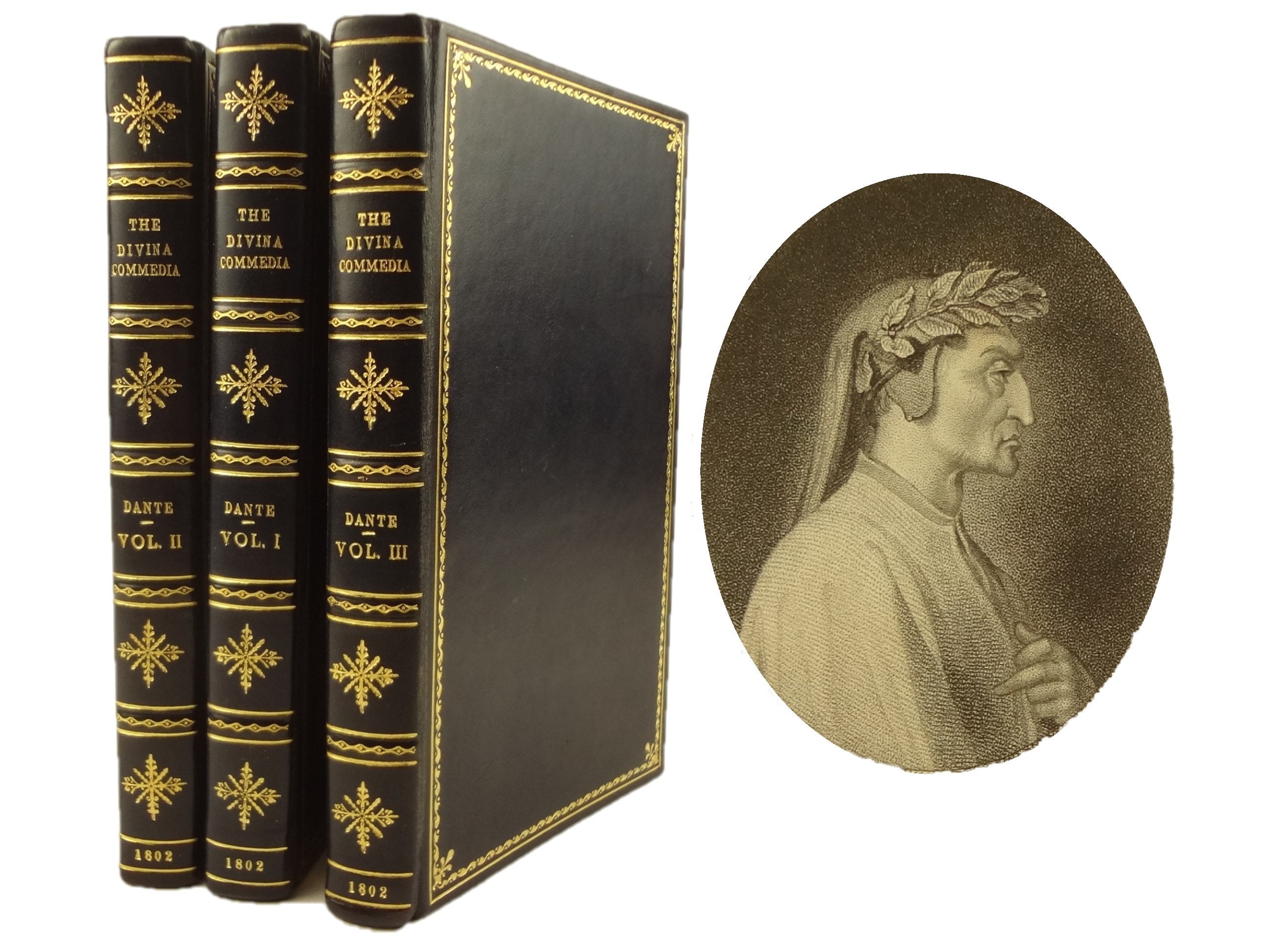 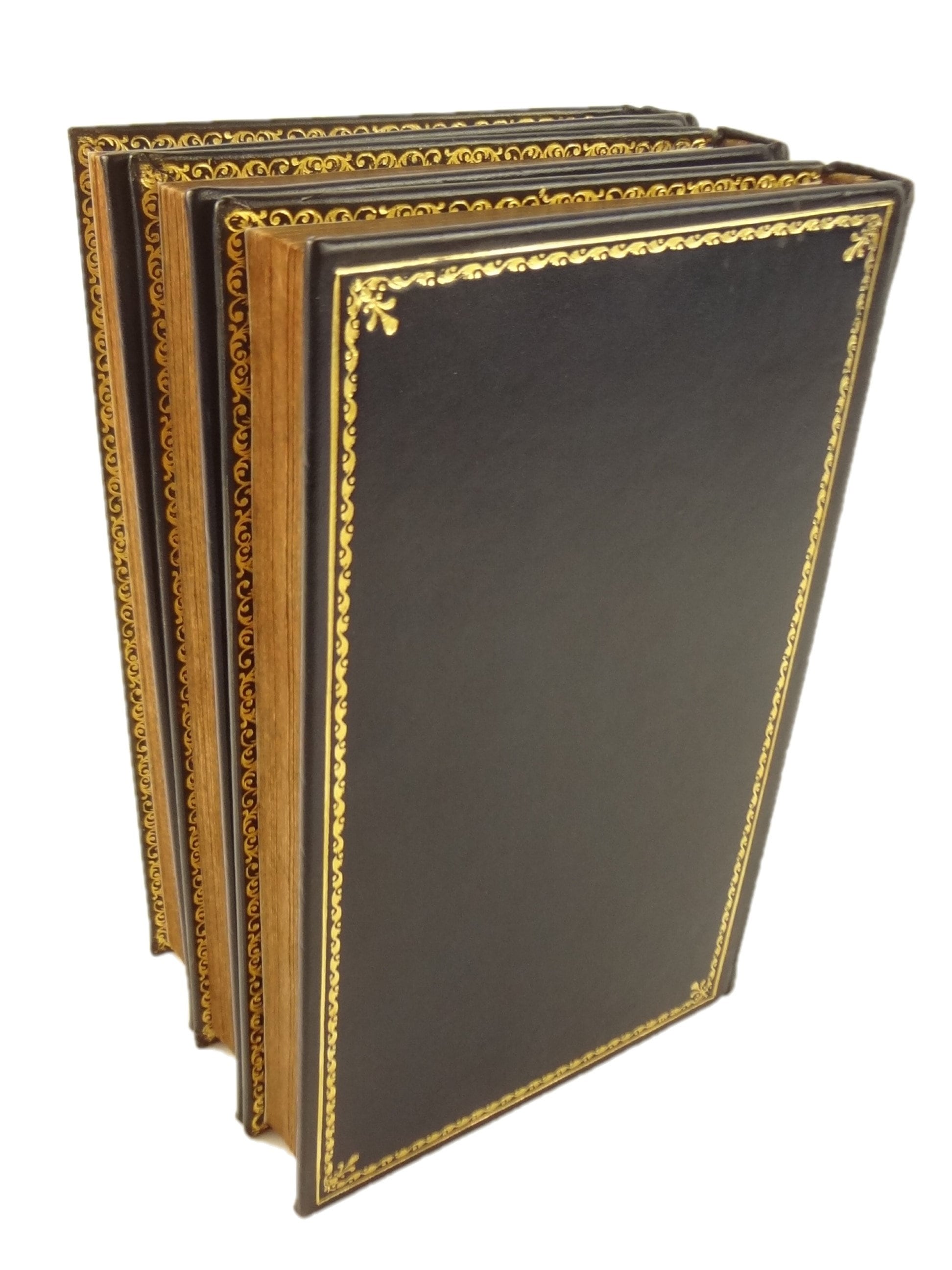 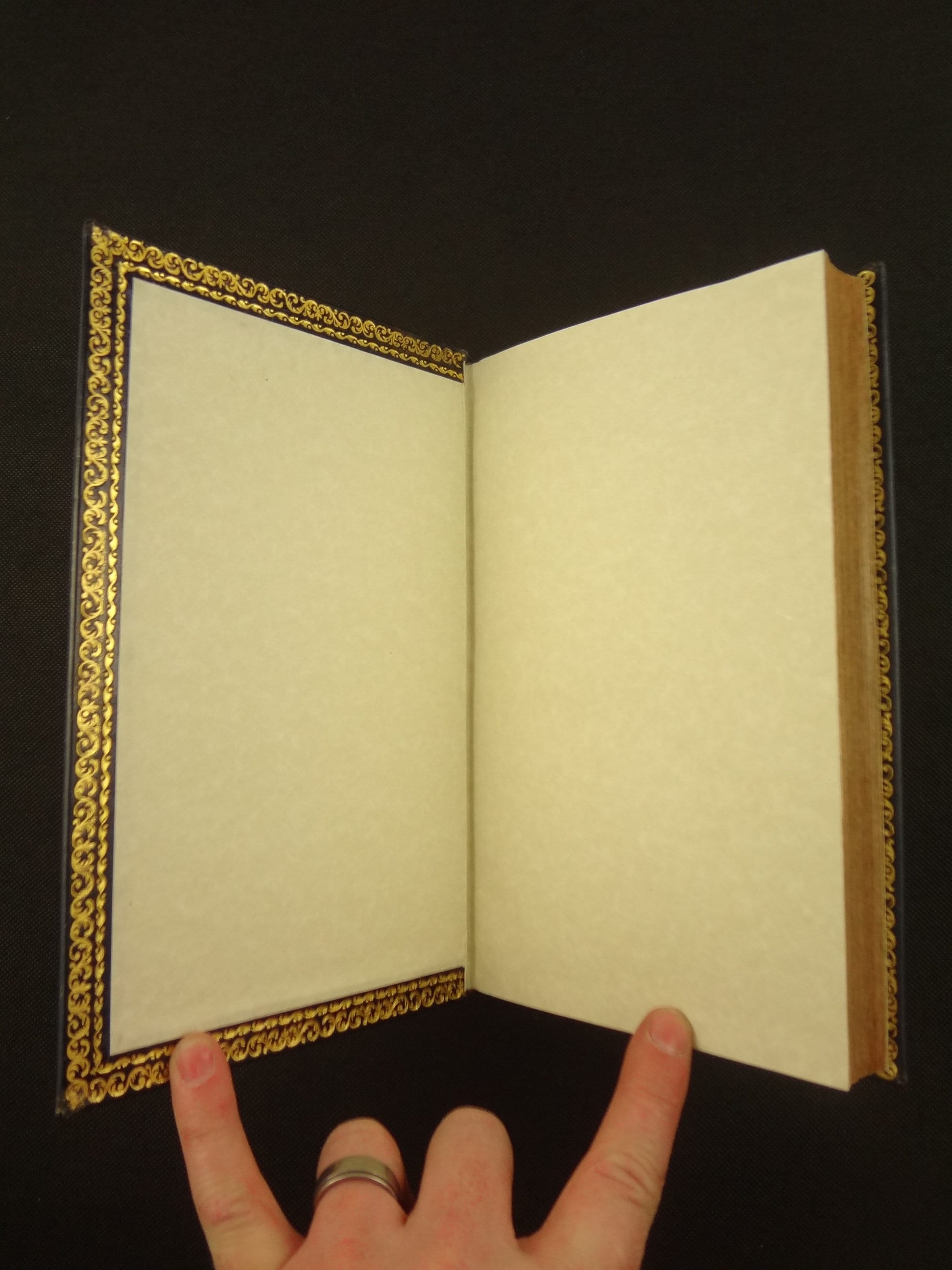 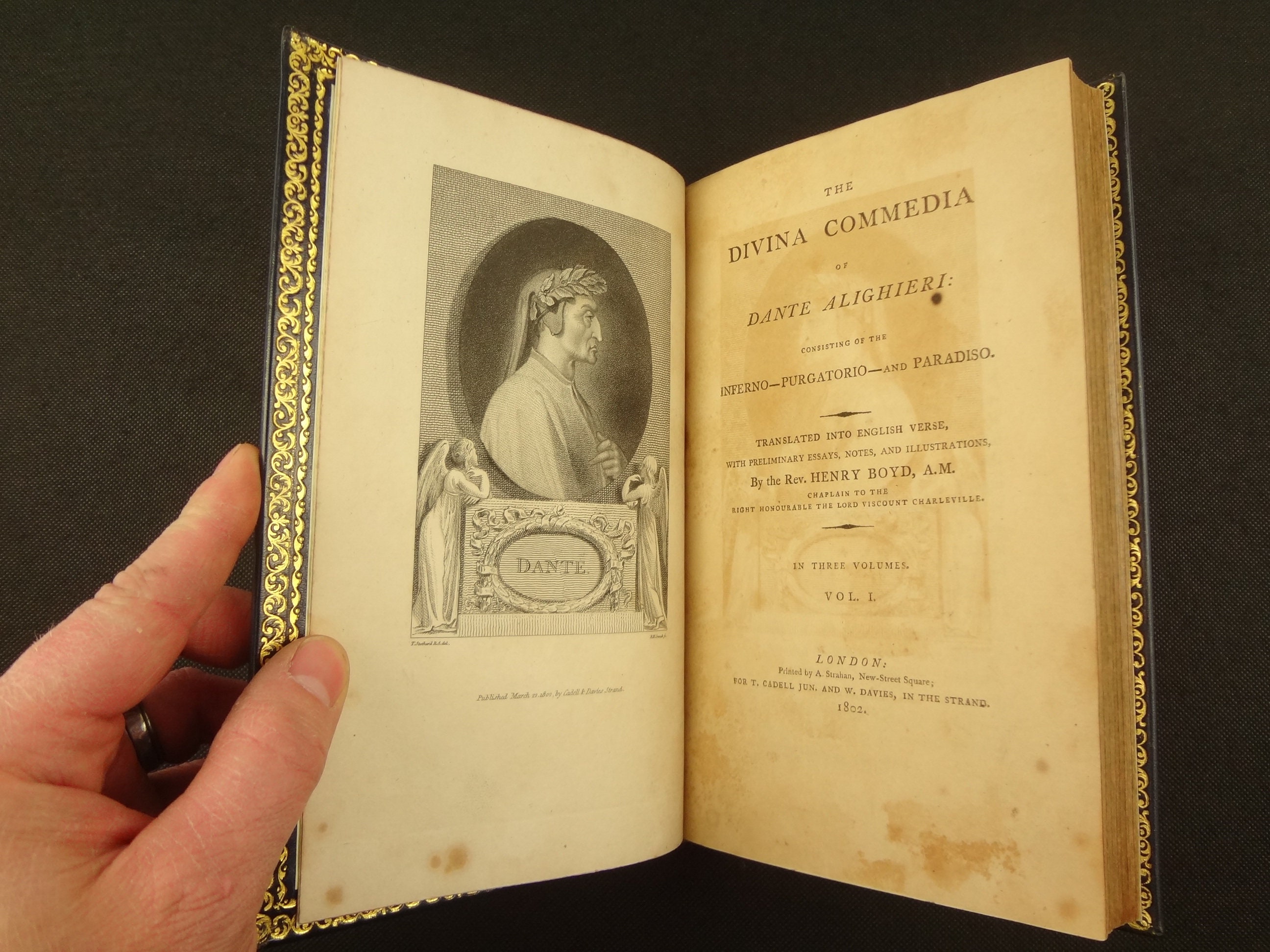 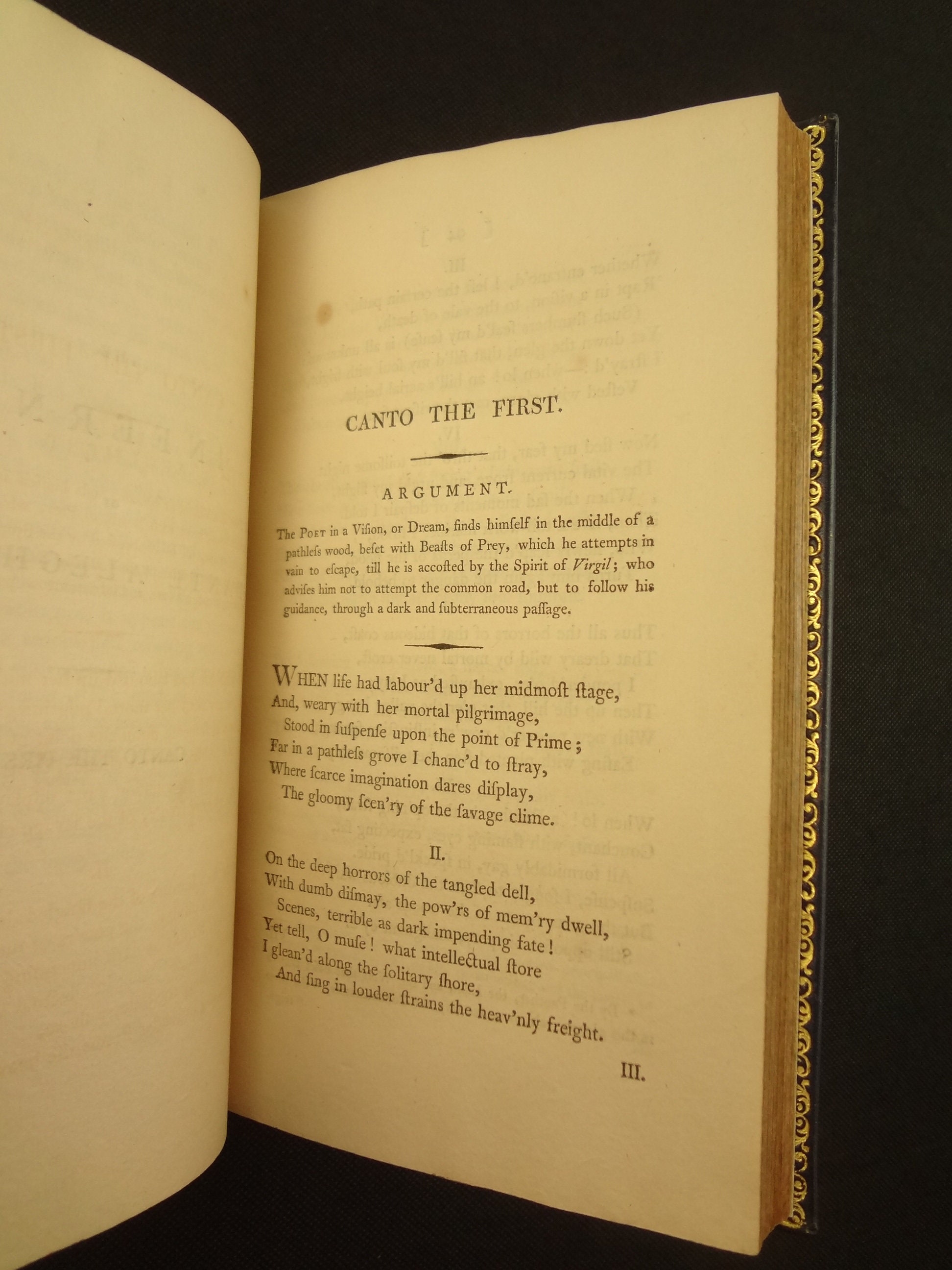 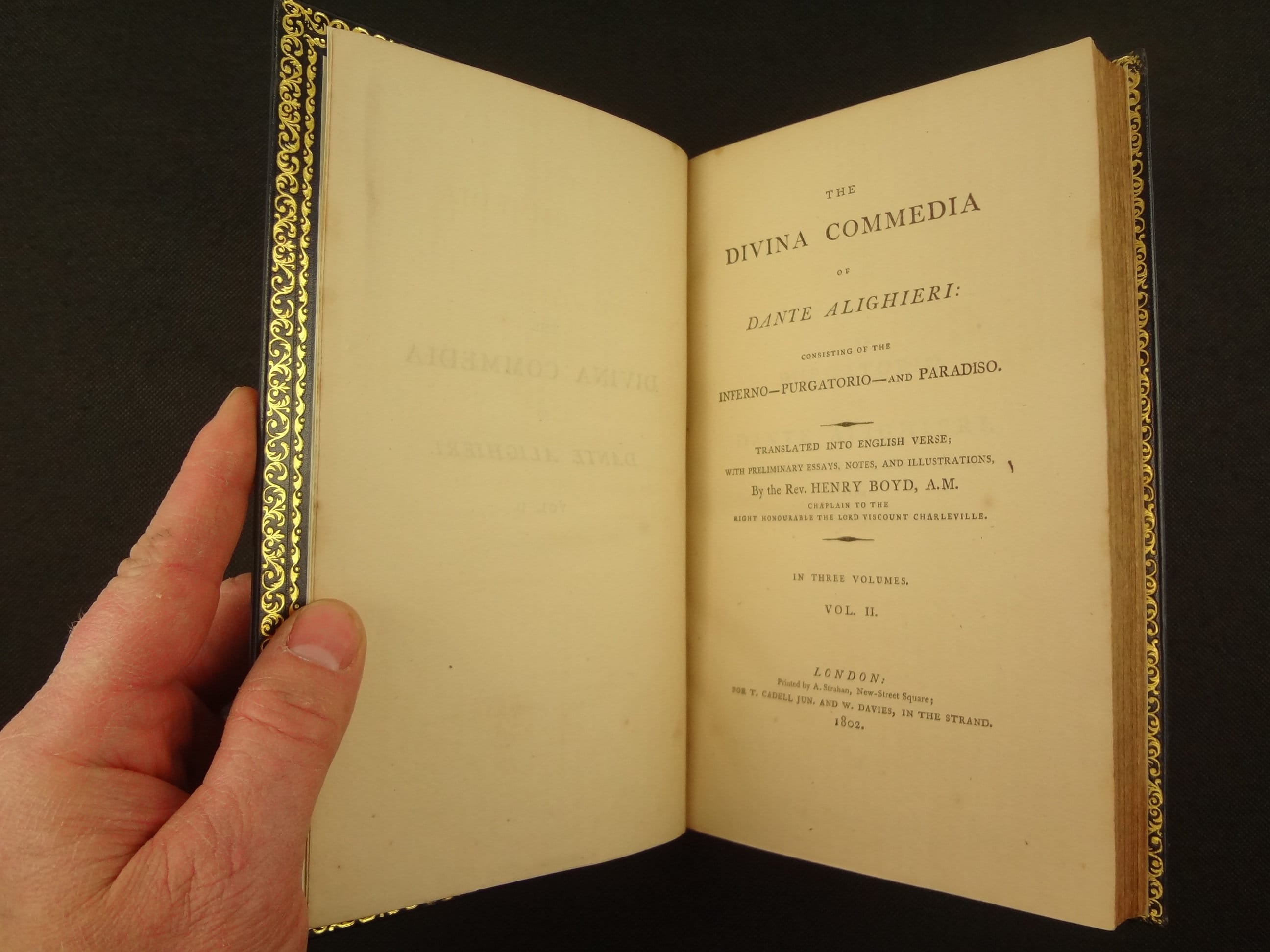 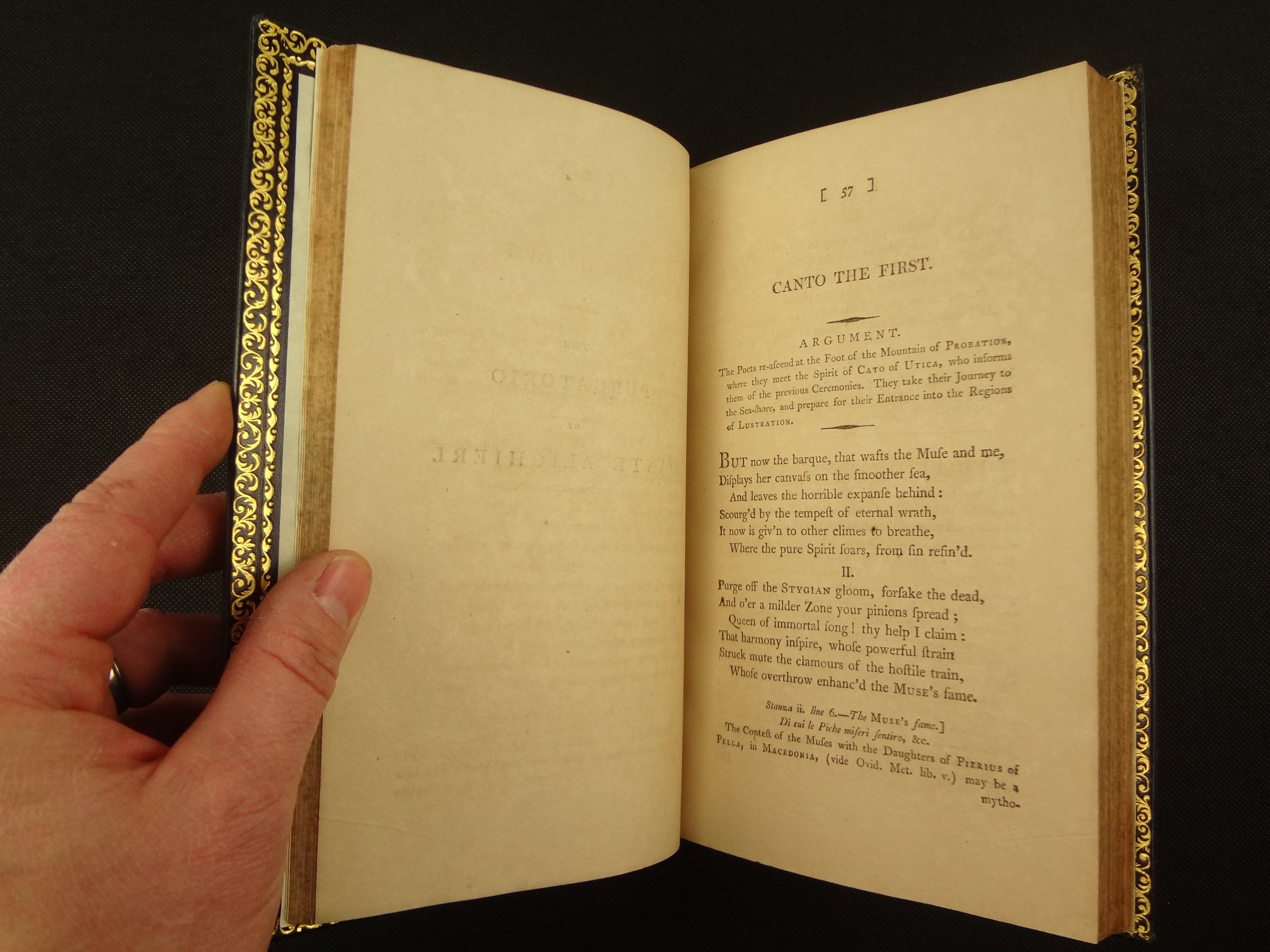 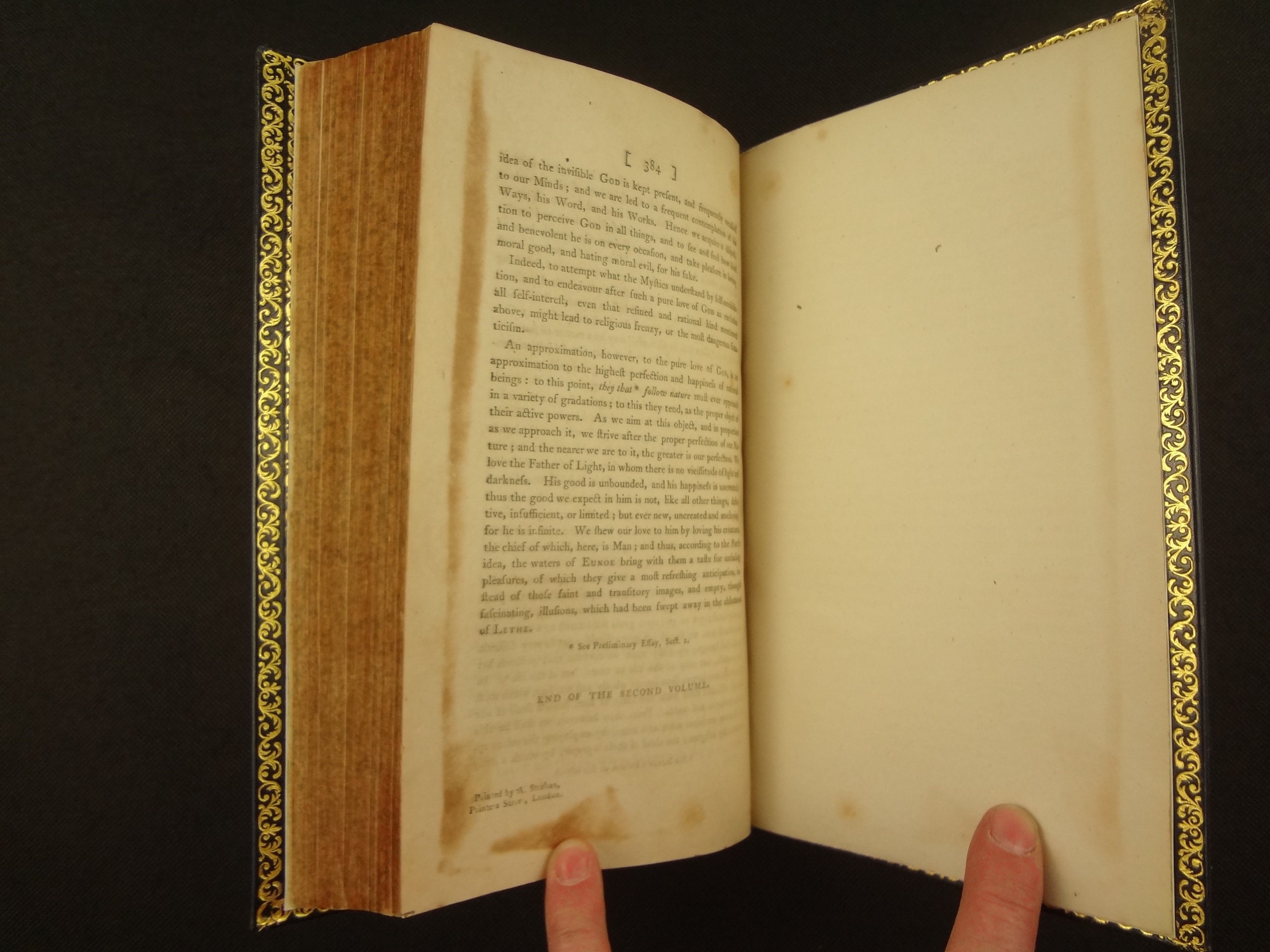 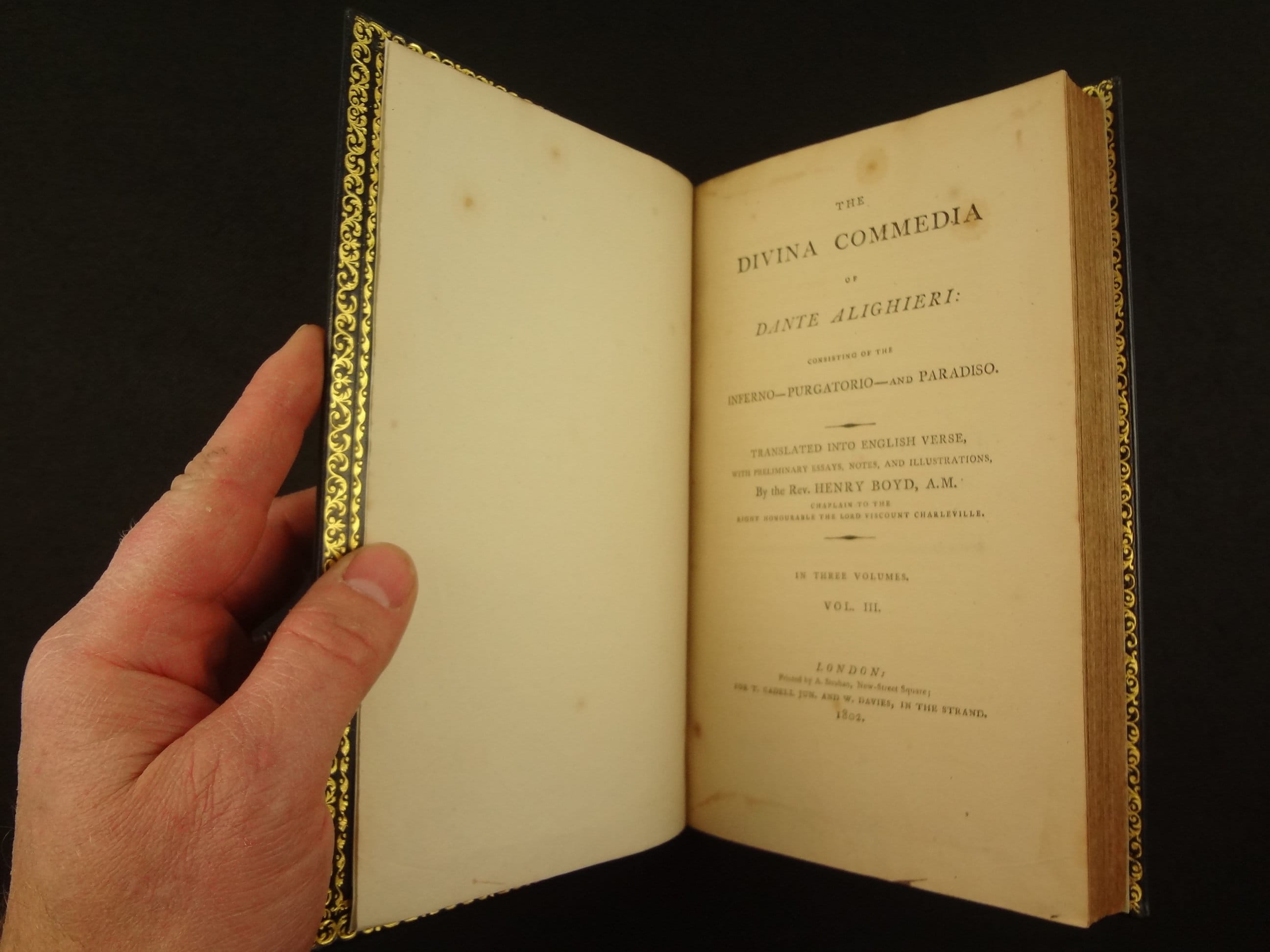 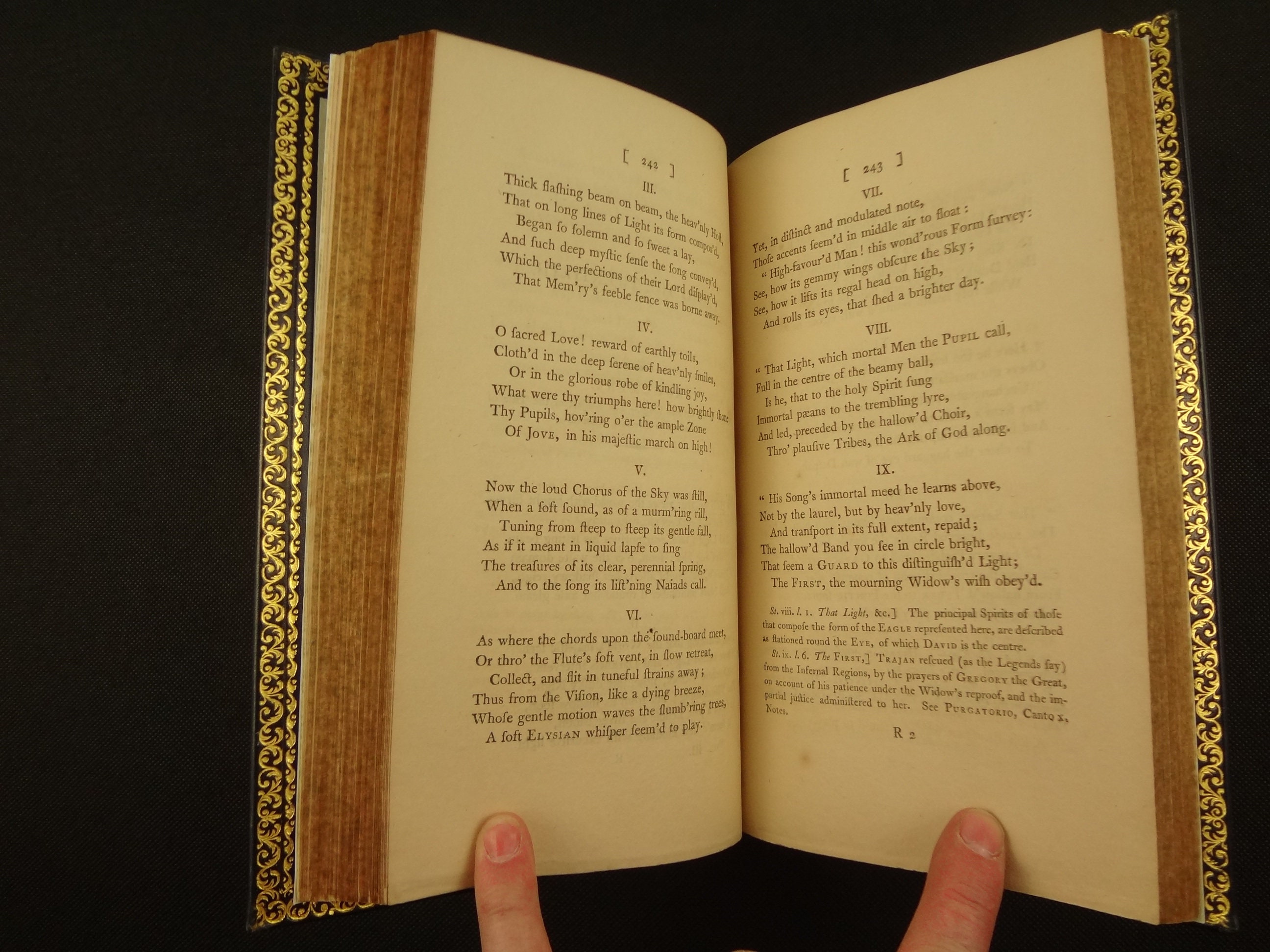 The first English translation of the entire Divine Comedy, as prepared by the Rev. Henry Boyd. Remarkably, perhaps due to anti-Catholic sentiment, the English speaking world largely ignored The Divine Comedy until the 18th century, when William Blake translated portions of it and is accredited with reigniting interest. The Rev. Henry Boyd was the first to complete translation of the entire work, published in 1802.

This example of the 1802 first English edition has fresh bindings, sympathetic to the historic nature of the work, retaining their original endbands, endpapers, and page edges (still toned with antiquity, and matching). With care, this set is ready for centuries more of use, reference, learning and enjoyment.

The Divine Comedy is a long narrative poem by Dante Alighieri, begun c. 1308 and completed in 1320, a year before his death in 1321. It is widely considered to be the preeminent work in Italian literature and one of the greatest works of world literature. The poem's imaginative vision of the afterlife is representative of the medieval world-view as it had developed in the Western Church by the 14th century.

“The ‘Divina Commedia’ is an allegory of human life, in the form of a vision of the world beyond the grave, written avowedly with the object of converting a corrupt society to righteousness: "to remove those living in this life from the state of misery, and lead them to the state of felicity". It is composed of a hundred cantos, written in the measure known as terza rima, with its normally hendecasyllabic lines and closely linked rhymes, which Dante so modified from the popular poetry of his day that it may be regarded as his own invention. He is relating, nearly twenty years after the event, a vision which was granted to him (for his own salvation when leading a sinful life) during the year of jubilee, 1300, in which for seven days (beginning on the morning of Good Friday) he passed through hell, purgatory, and paradise, spoke with the souls in each realm, and heard what the Providence of God had in store for himself and to world. Virgil, representing human philosophy acting in accordance with the moral and intellectual virtues, guides Dante by the light of natural reason from the dark wood of alienation from God (where the beasts of lust pride, and avarice drive man back from ascending the Mountain of the Lord), through hell and purgatory to the earthly paradise, the state of temporal felicity, when spiritual liberty has been regained by the purgatorial pains. Beatrice, representing Divine philosophy illuminated by revelation, leads him thence, up through the nine moving heavens of intellectual preparation, into the true paradise, the spaceless and timeless empyrean, in which the blessedness of eternal life is found in the fruition of the sight of God." – 1913 Catholic Encyclopedia

Each volume measures approx. 22.5 x 14 x 2.5 cm.. Blue morocco bindings. Spine with five raised bands tooled in gilt, with six compartments, four with a central floret motif, one with the title, one with the author and volume, and the year at the base, all in gilt. Boards with double gilt border, one fillet, inner border rolled; inner corners of the borders with fluer-de-lis in gilt. Sprinkled (faded) edges. Refreshed pastedown/flyleaf. Volume one has a frontis portrait of Dante.

Some rust spots and foxing, more towards ends; text blocks have some, but it's light. Toning to paper throughout. V1 Title page has small candle ember spot, no text affected. Occasional candle ember spot (small, less than 1 cm.), most in bottom margin. Page 323-326 uncut at top edge (on that note, margins are wide!). Thumb mark on 339. Occasional dog-ear crease. Square ghost of insert at end of volume 1 between last text page and endpaper. V2, smudge on blank 216. A few stray ink marks along the bottom edge of the text blocks. Although the works have some foxing, as is common to paper of this period, it's predominately clean with wide margins. No annotations.