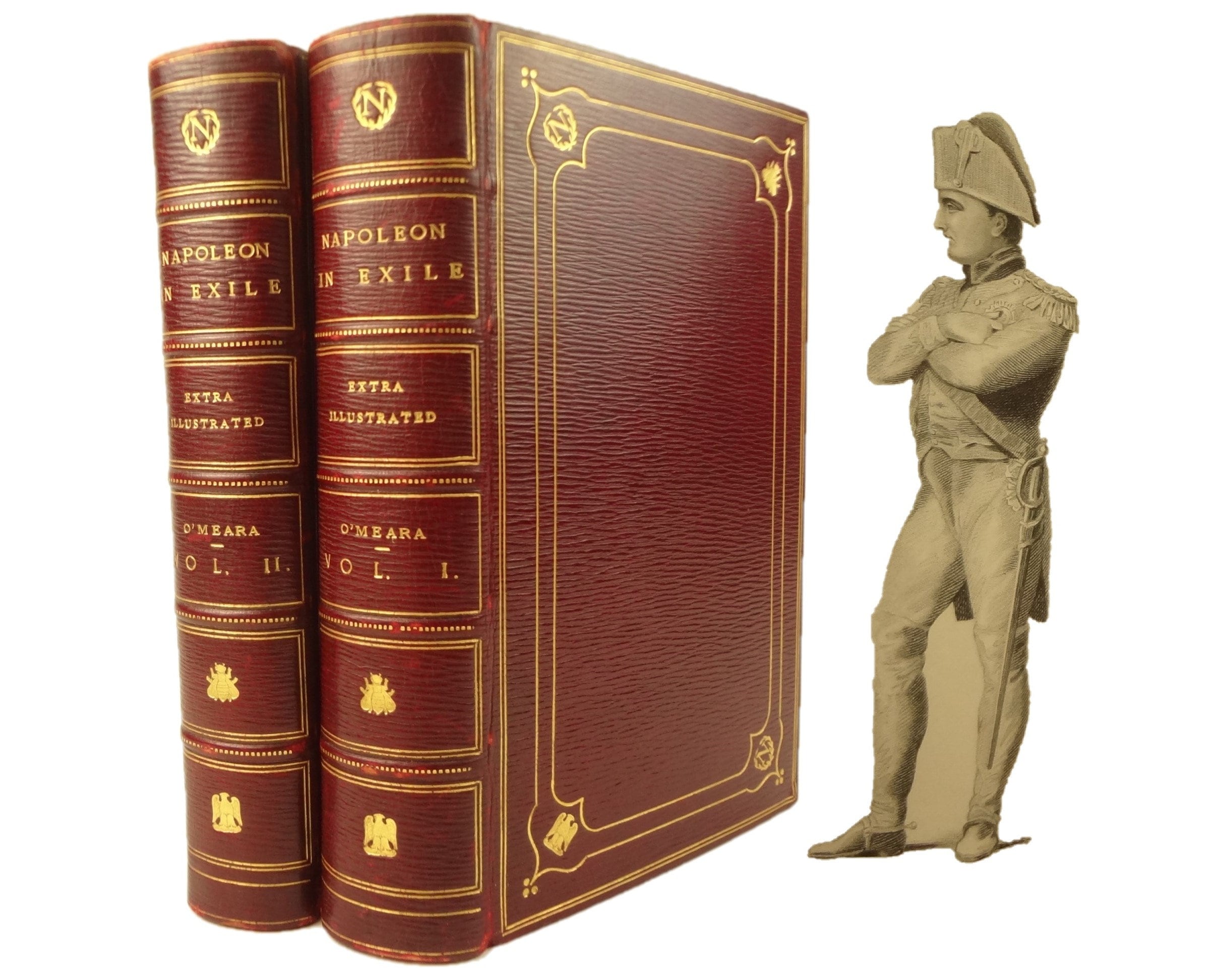 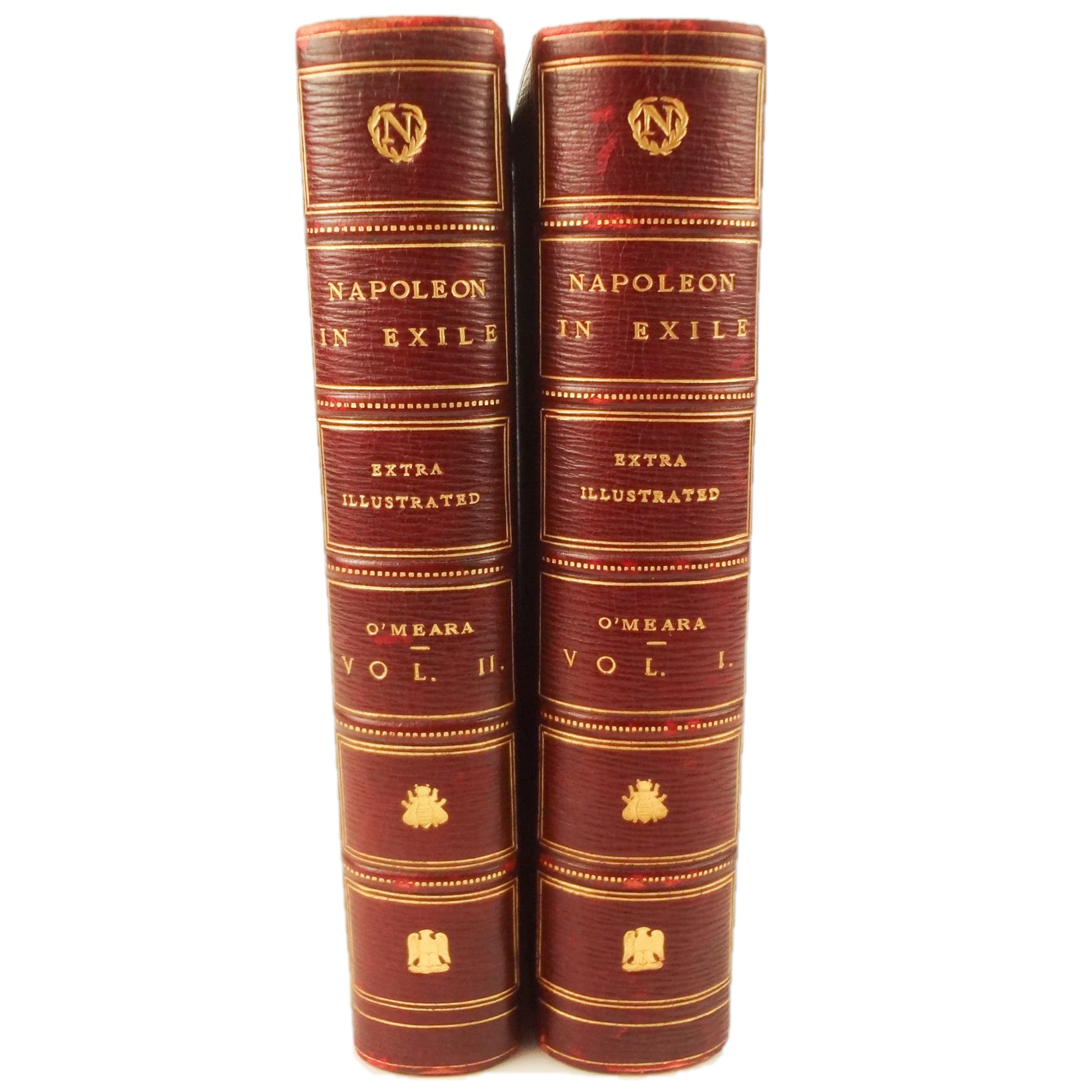 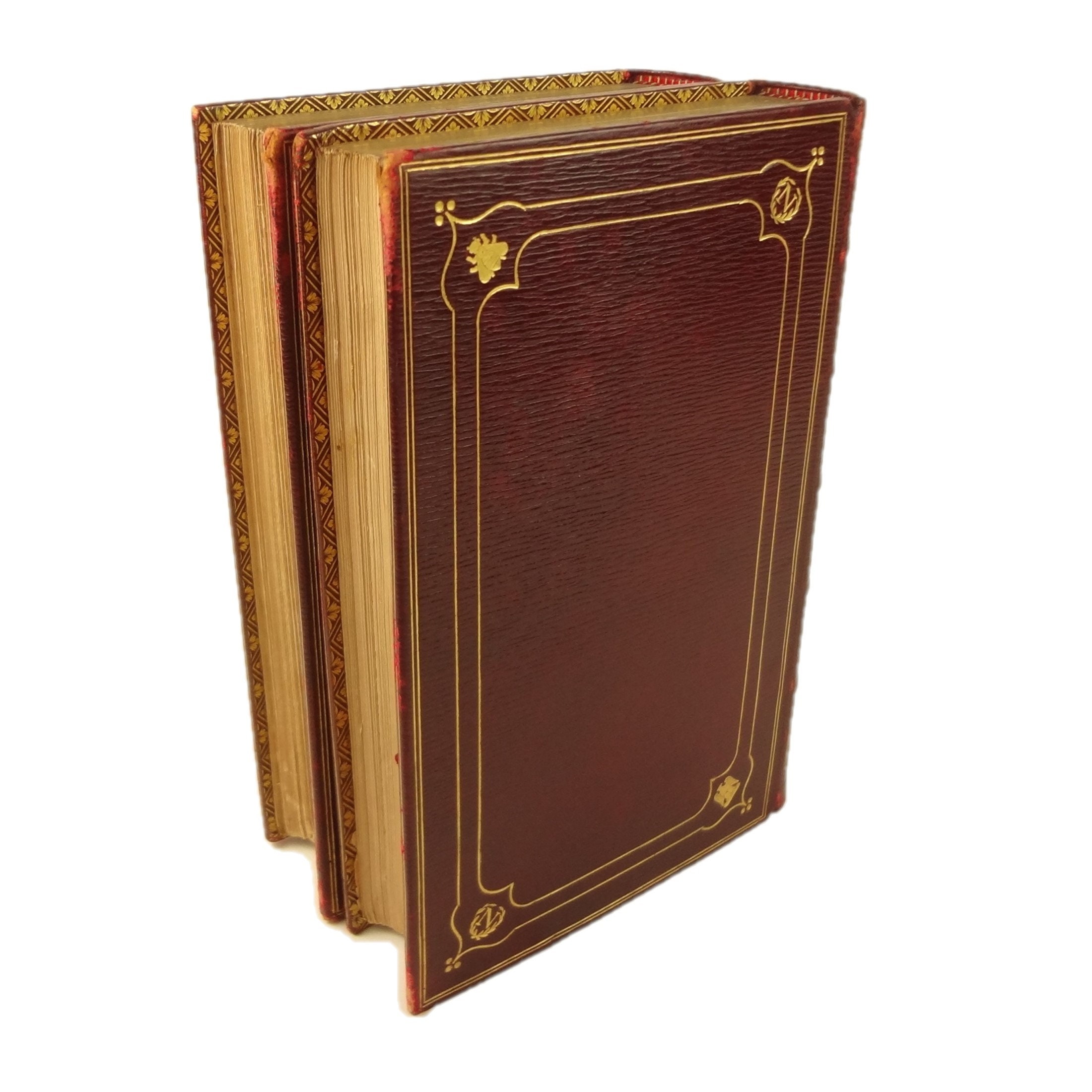 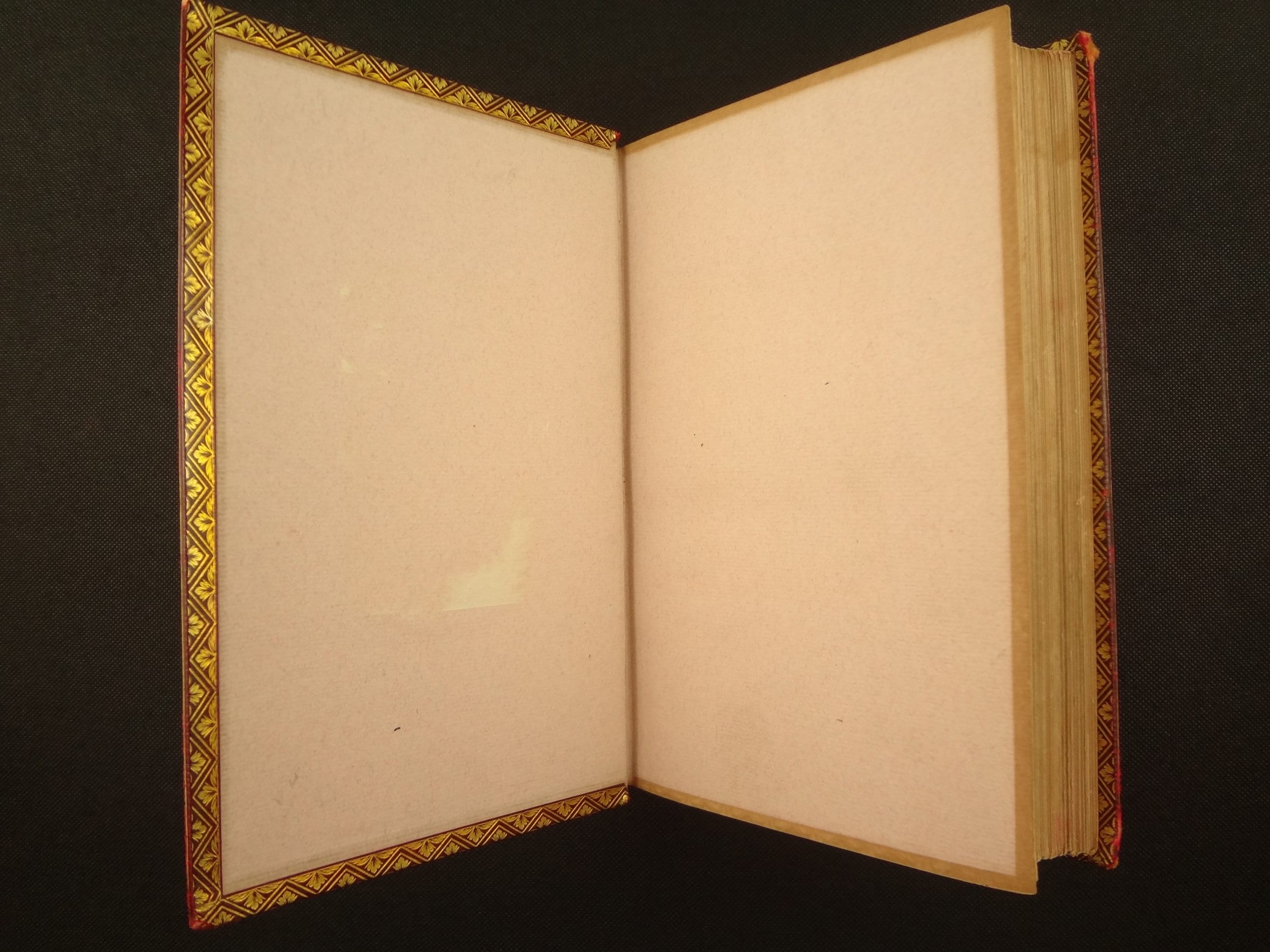 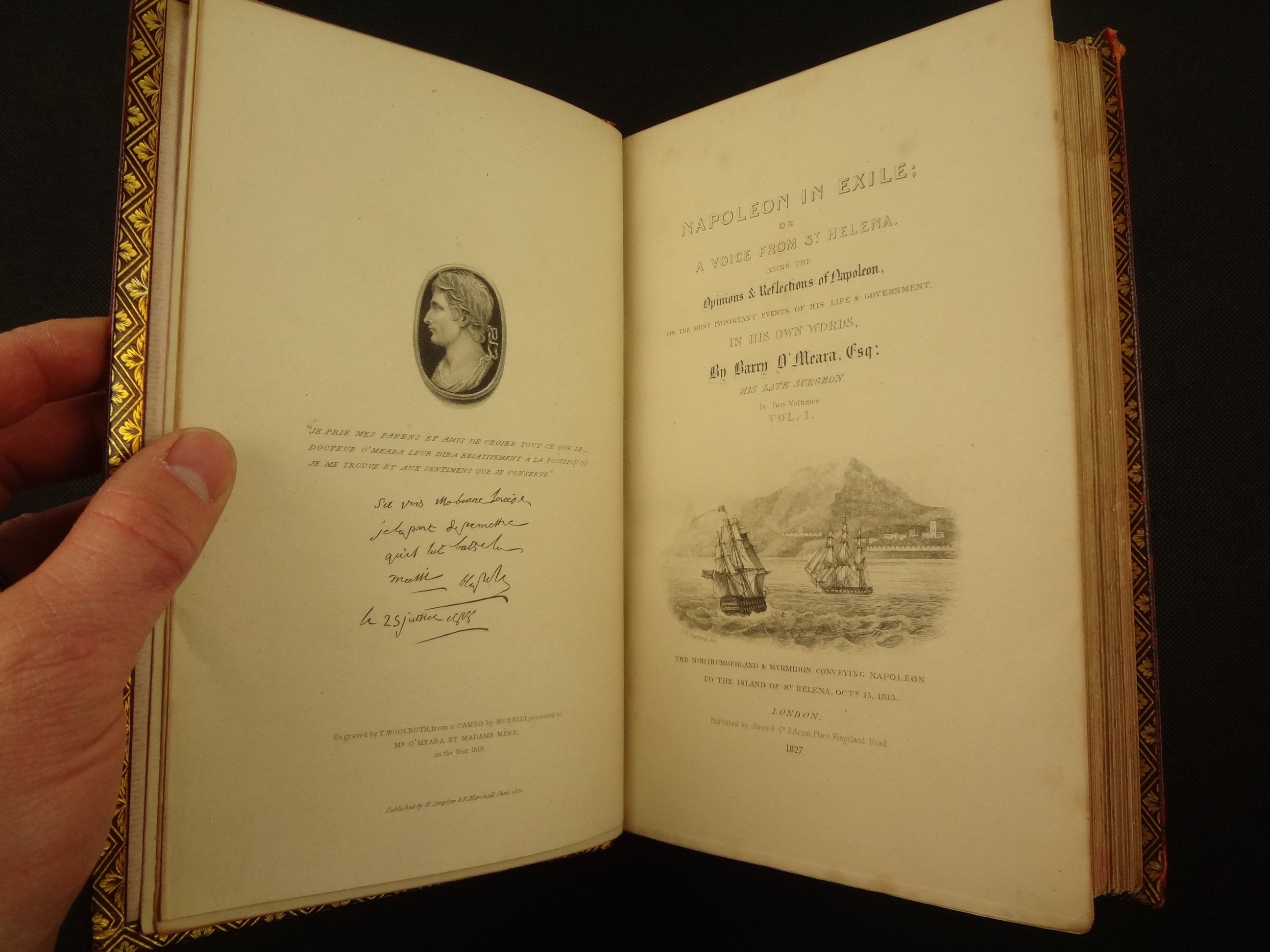 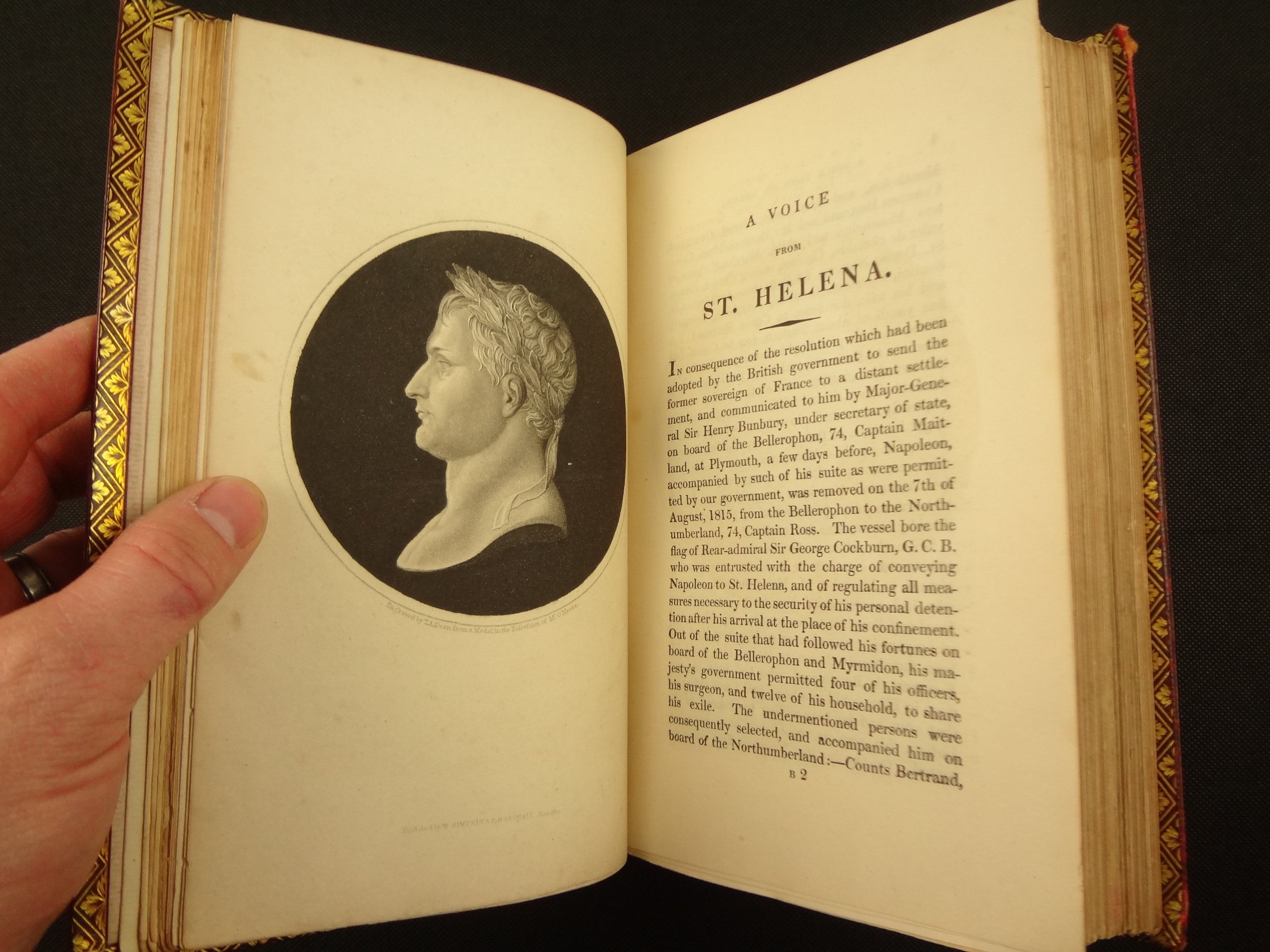 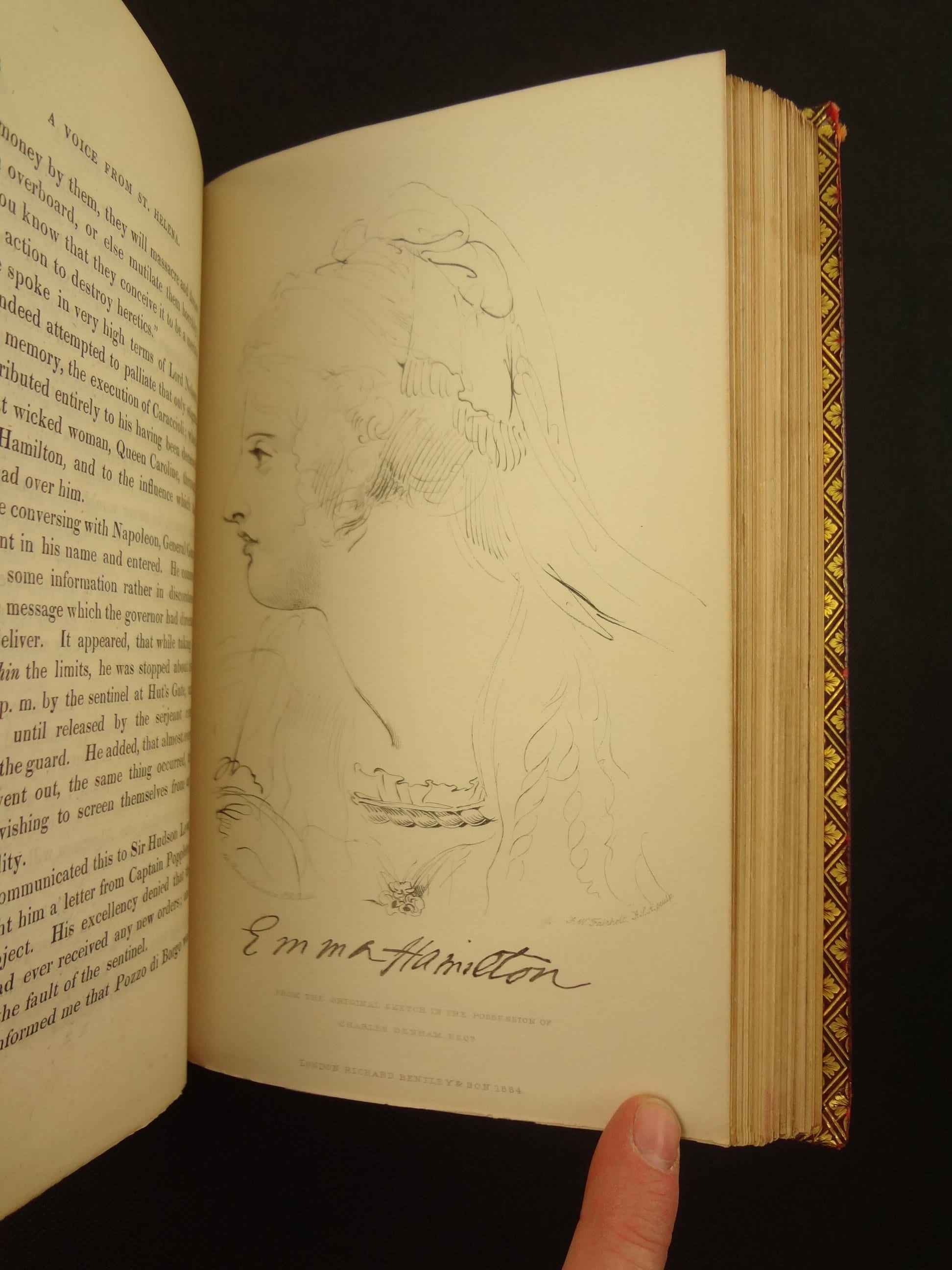 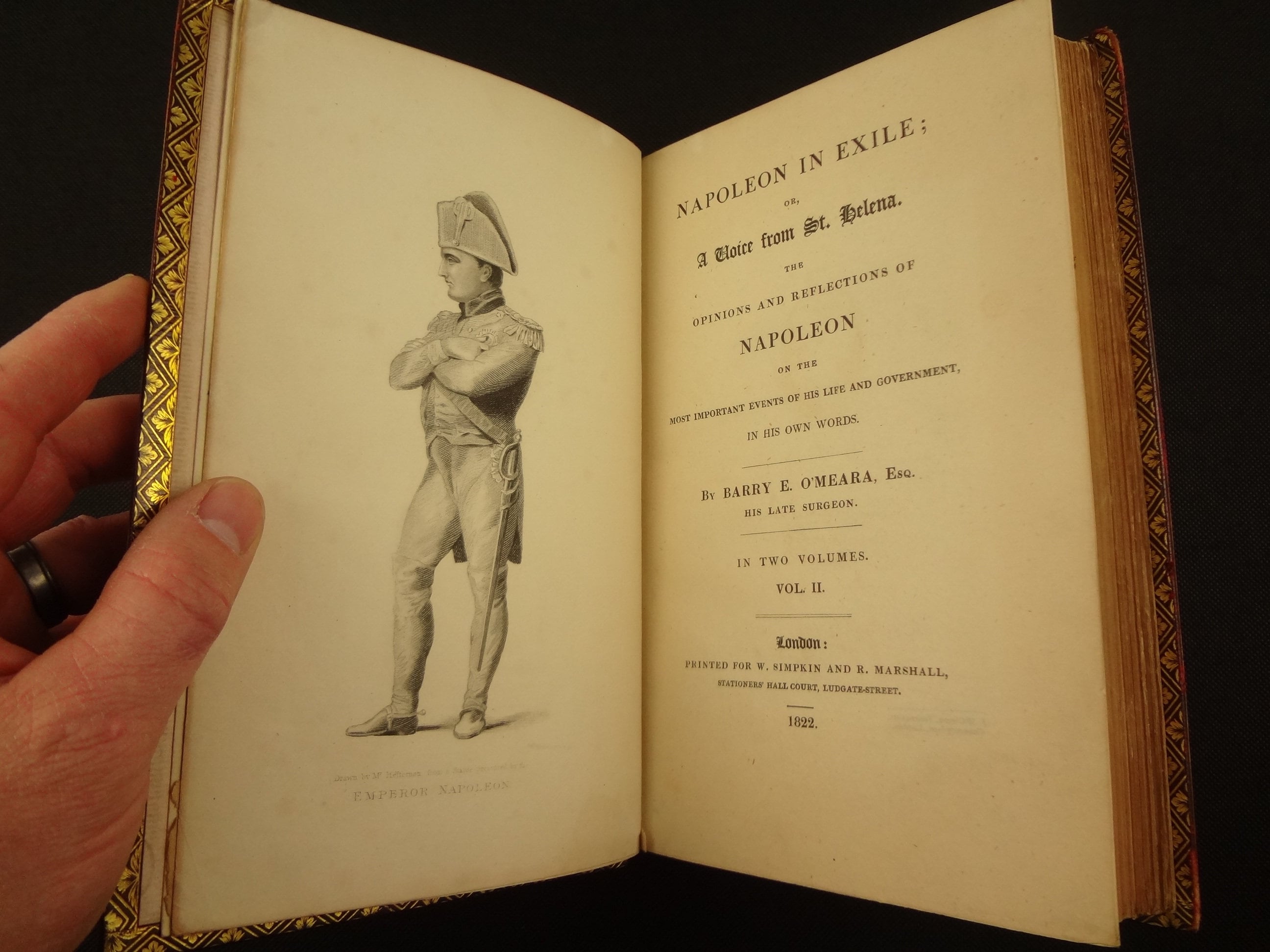 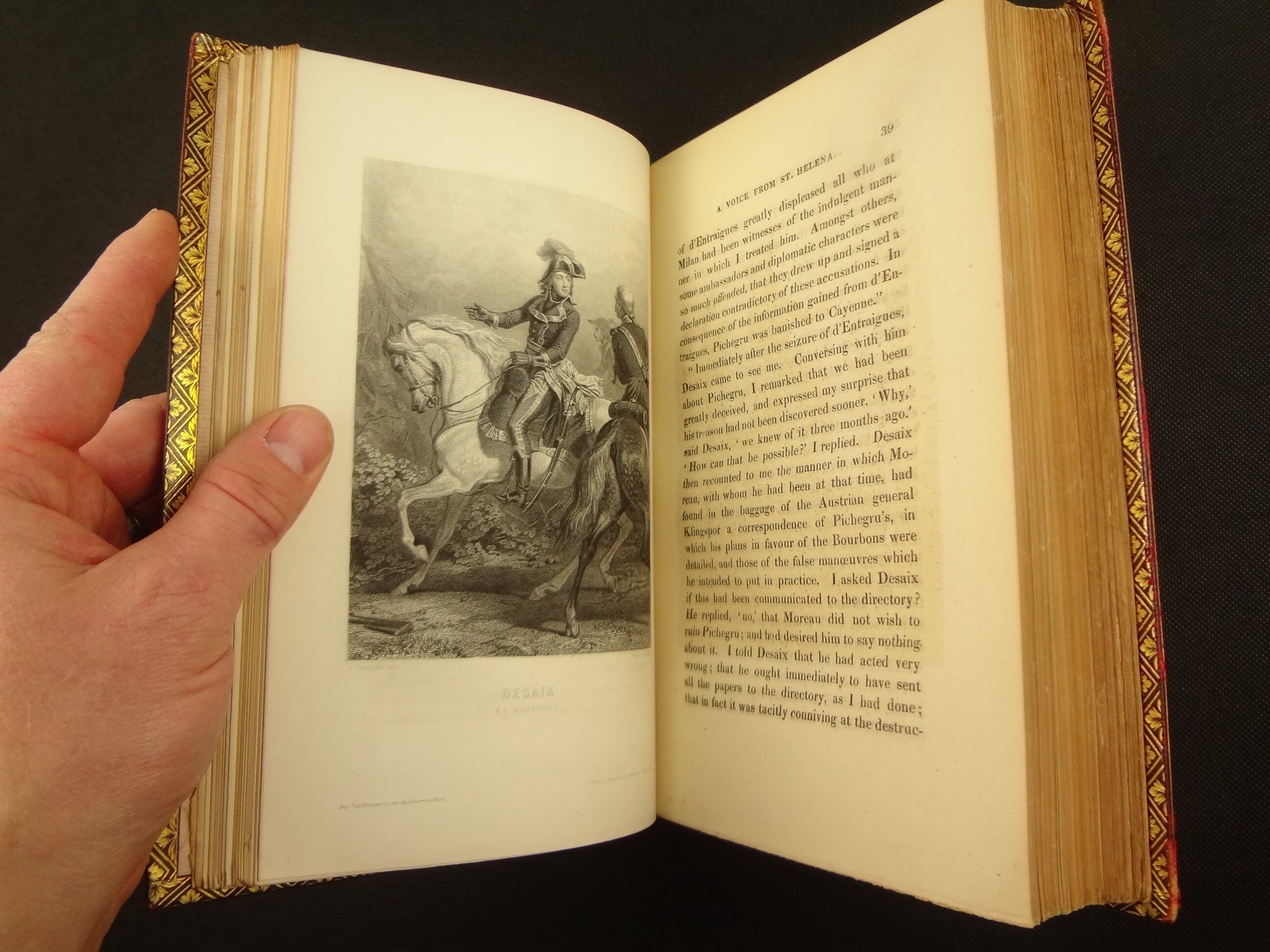 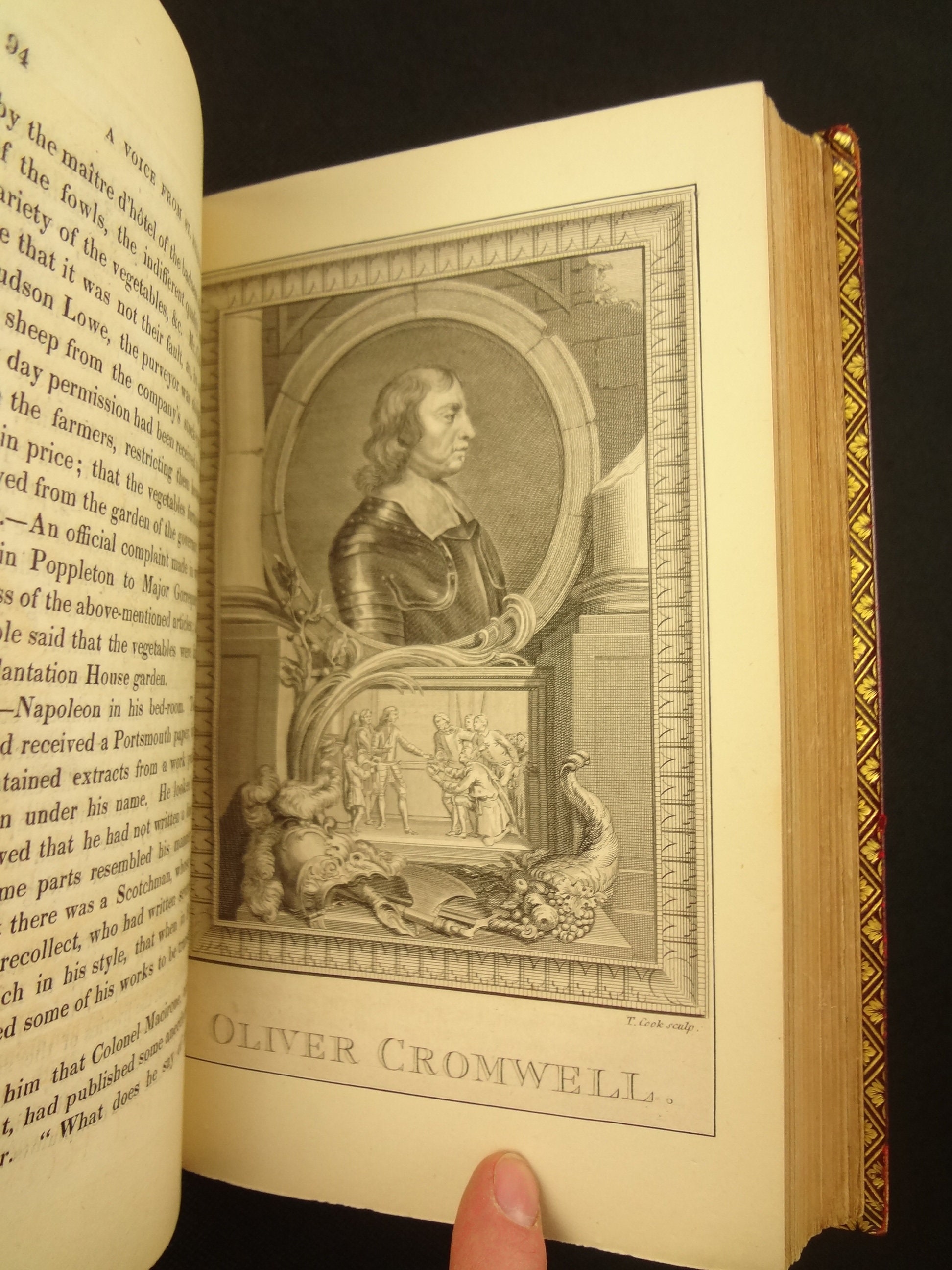 Extra-Illustrated. 1827 Napoleon in Exile by O'Meara (his surgeon). Fine bindings.

Full title: Napoleon in Exile; or, A Voice from St. Helena. The Opinions and Reflections of Napoleon on the Most Important Events of his Life and Government, In His Own Words. By Barry E. O'Meara, Esq., His Late Surgeon.

The binding is unsigned, but the tools match other known Bayntun copies (see Bauman Item #108783).

O'Meara is remembered as the author of Napoleon in Exile, or A Voice From St. Helena (1822) a book which charged Sir Hudson Lowe with mistreating the former emperor and created no small sensation on its appearance. Several period pieces accused O’Meara of being in Napoleon’s pocket, and this pro-Napoleon work was meant for public relation, with the goal of instigating a return for Napoleon, thwarted only by his death.

“We are of opinion, that it is very possible to collect and compile from it a more authentic and detailed account of him, than has hitherto appeared in our language. It is written pretty much upon the plan of Boswell's Life of Johnson, and contains a kind of journal, not only of the events that happened at St. Helena, but also of the emperor's conversation, during the period that Mr. O'Meara attended him in the capacity of a surgeon ; and what gives it peculiar interest is, that no small portion of it has evidently been dictated by Napoleon himself, with a view to publication.” – The New Evangelical Magazine and Theological Review, 1822, p. 253

Both measure approx. 22.5 x 14.5 x 3 cm.. Dark red straight-grain Morocco. Boards with outer frames of double gilt fillet and an inner frame with Napoleonic devices at the corners (bee, crowned "N", eagle). Spines with five raised bands, with a roll of dots in gilt over each; compartments framed in double gilt fillet, three with Napoleonic devices and three with the title, "Extra Illustrated", Author and volume in gilt. Top-edges gilt. Board edges with gilt fillet. Turn-ins rolled in leafy geometric gilt roll. Triple-colored endbands. Light purple pastedown/flyleaves, with a tip-of-the-hat to Roger Payne's straight-grain Morocco with purple pastedowns. Extra-illustrated, with 99 plates added, many in "windows".

See pictures. A little wear at edges, corners, joints, but not much. A few light rubs on the two bindings. Very handsome books, they present very well. Corners on back board of volume two show a little more wear. Ex-libris plate removed from pastedowns in both joints. Turn-ins have ghosted flyleaves. Binder and bookseller notes on blank endpapers; "99 extra plate", "DD0020847, 4500-", "2 vols". Pencil "M" on back of second title page. Binder notes on the back of all the extra plates. Occasional fox/rust spot throughout, typical of paper of this age, not excessive. Occasional toning to page. Bookseller notes on verso of v2 front flyleaf, "B VI 7 RWL". Occasional ghosting of extra-portraits, no tissue used. Mostly very attractive volumes, with many extra-illustrations!