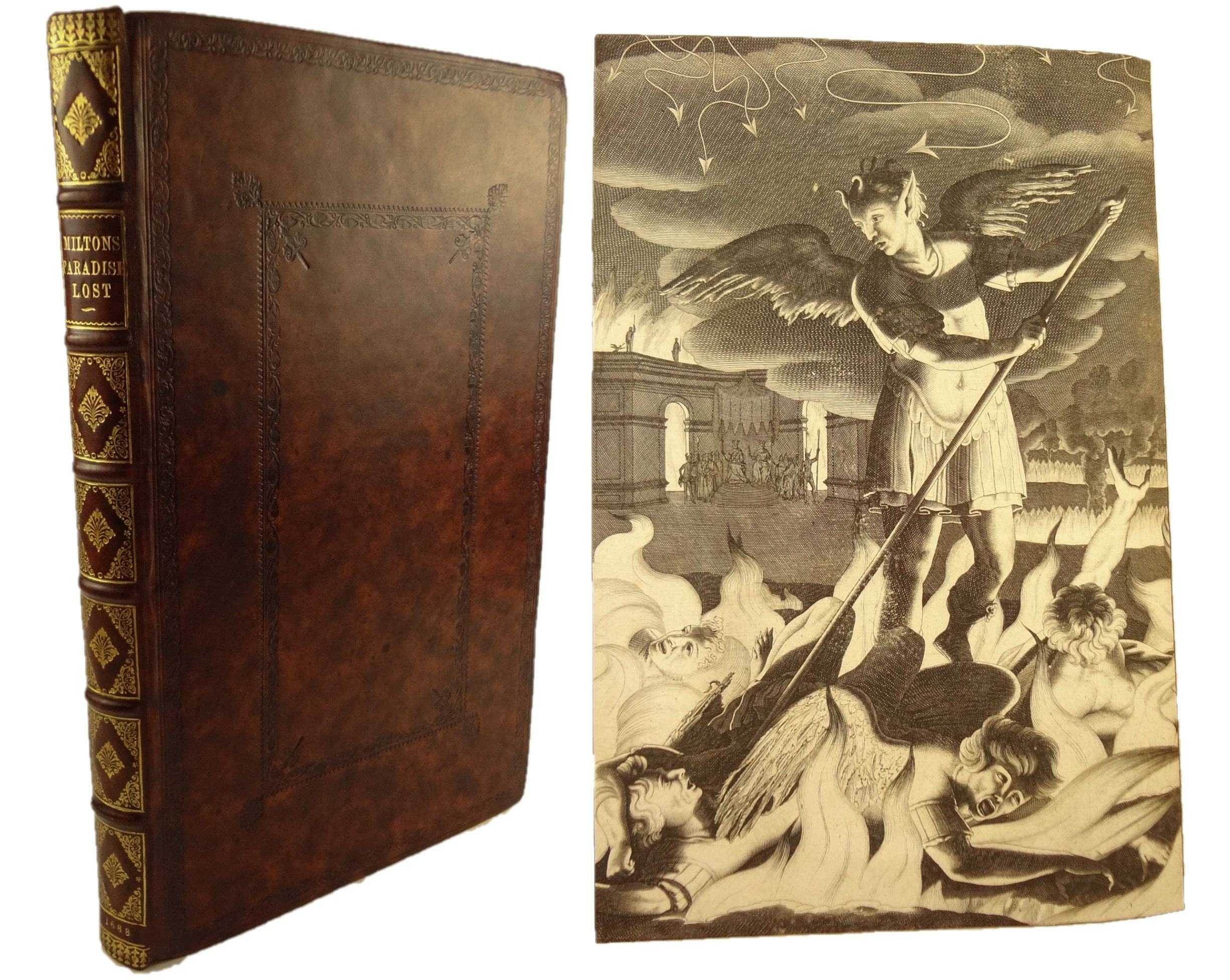 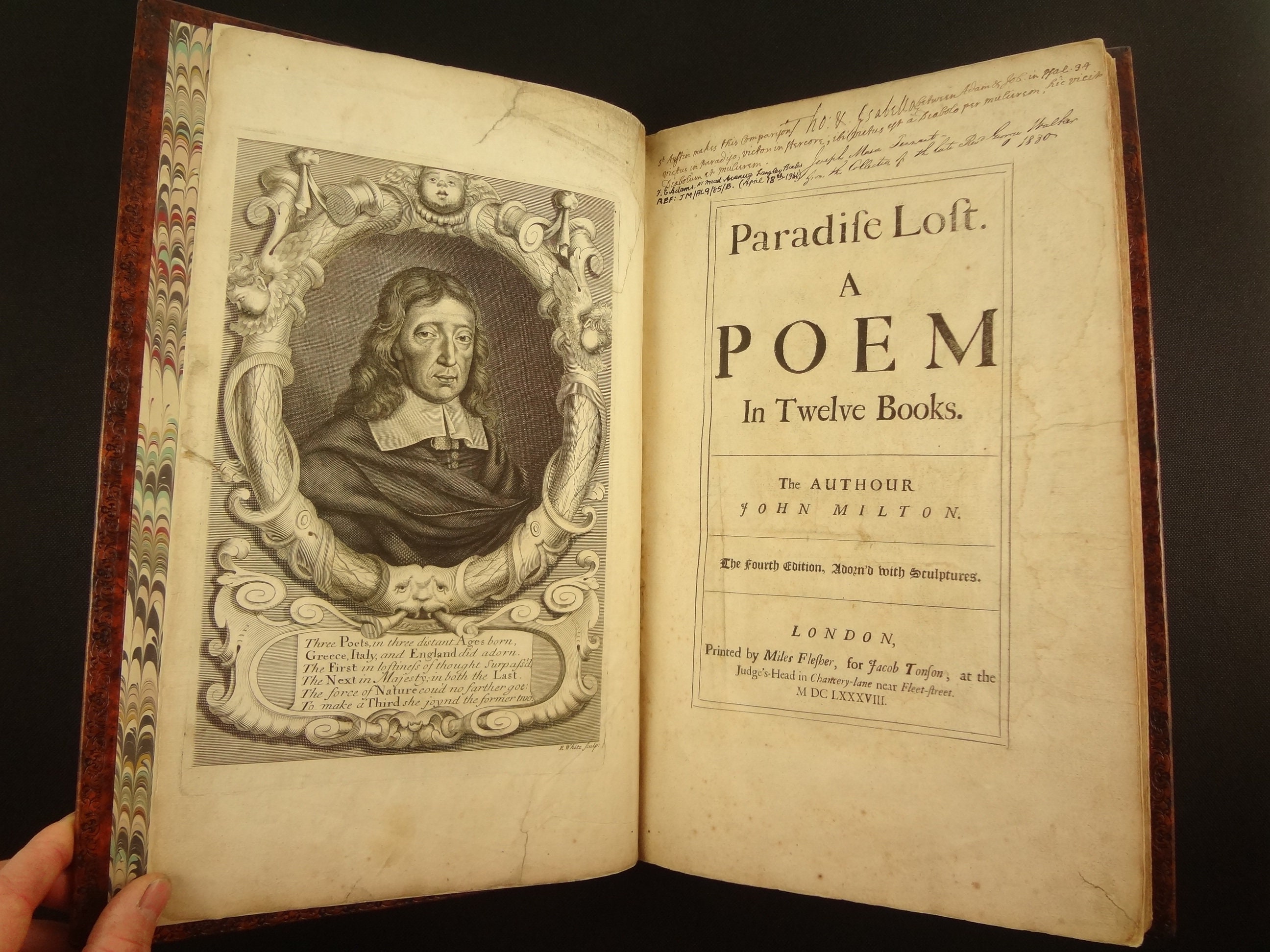 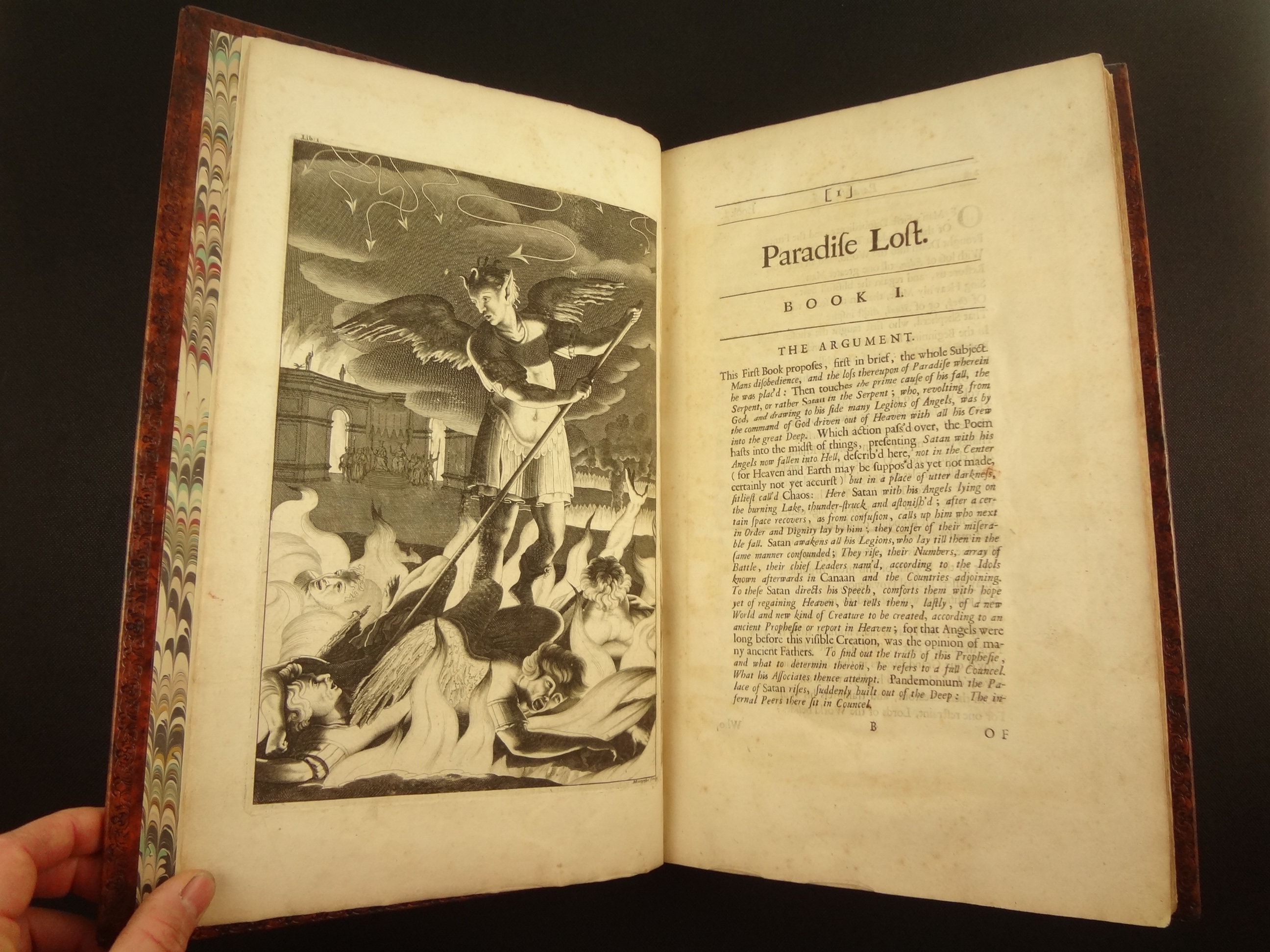 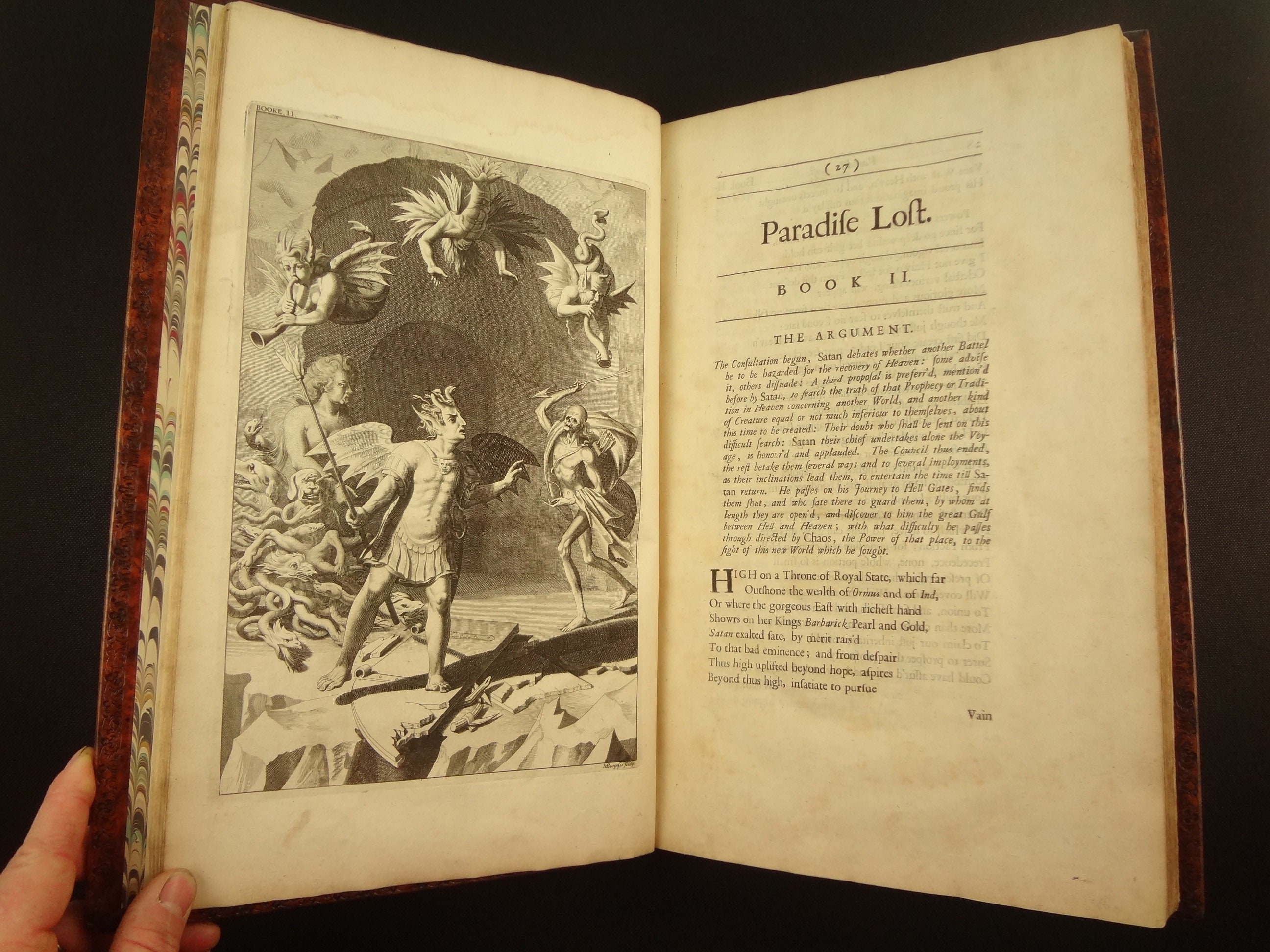 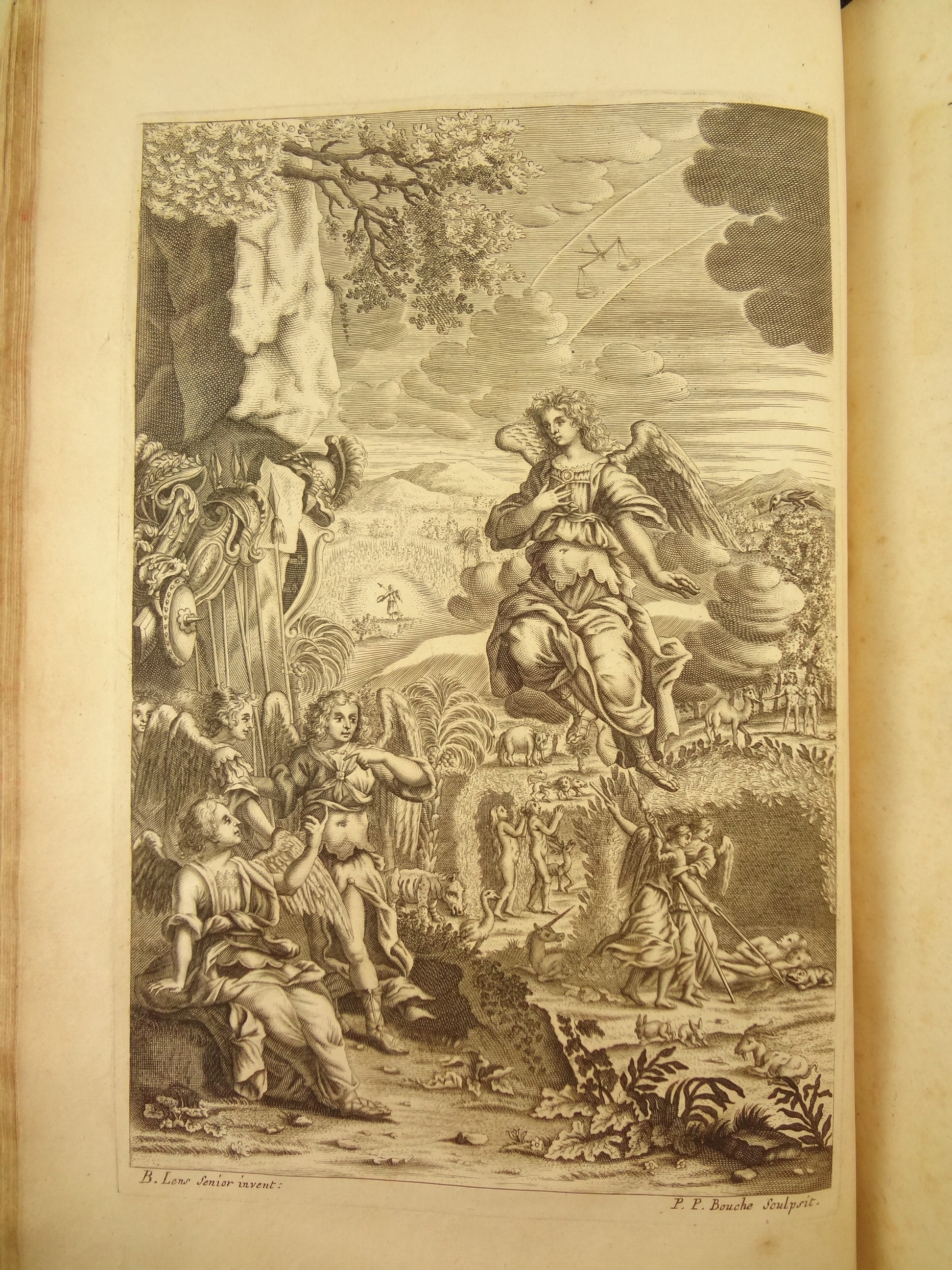 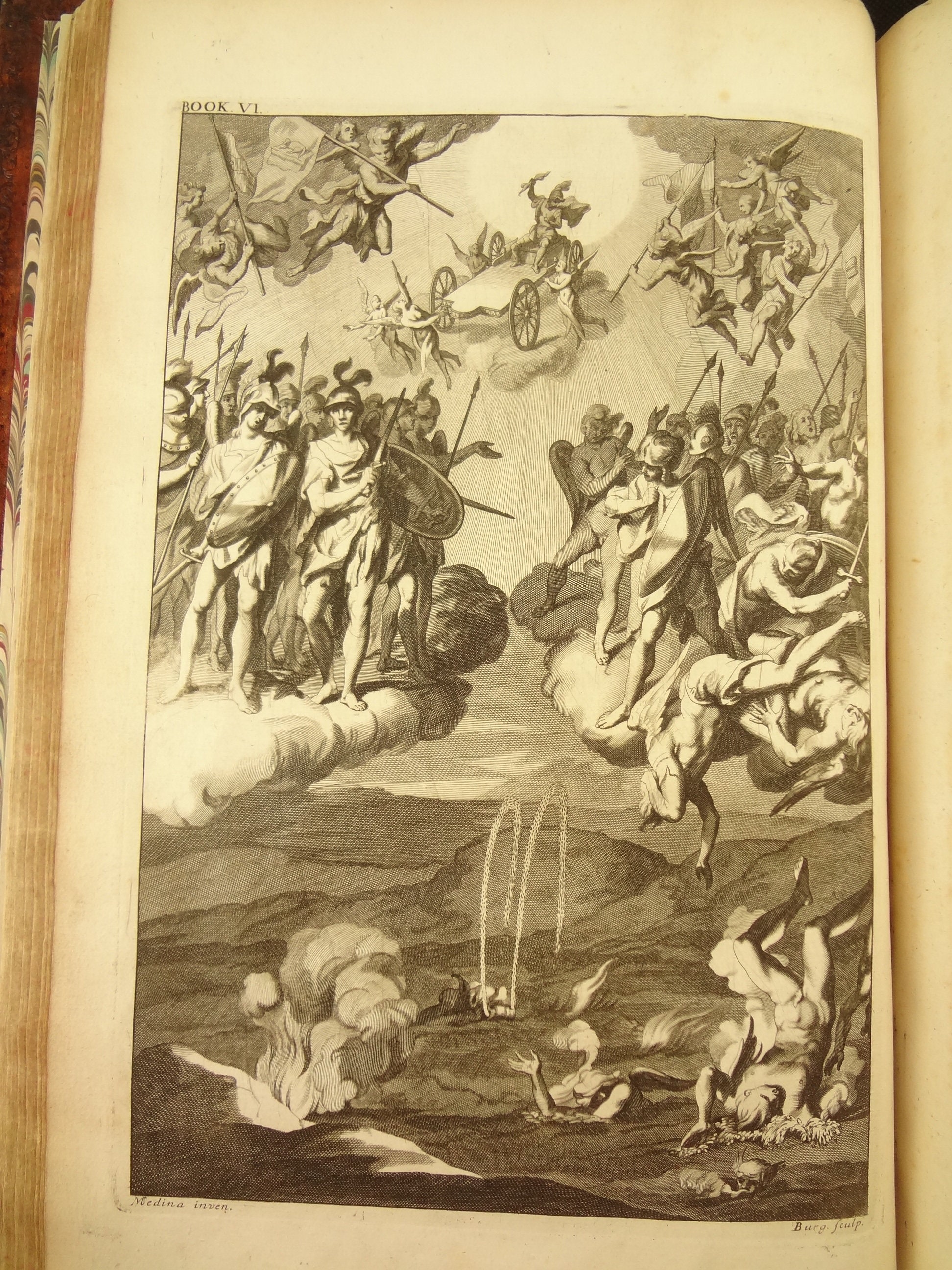 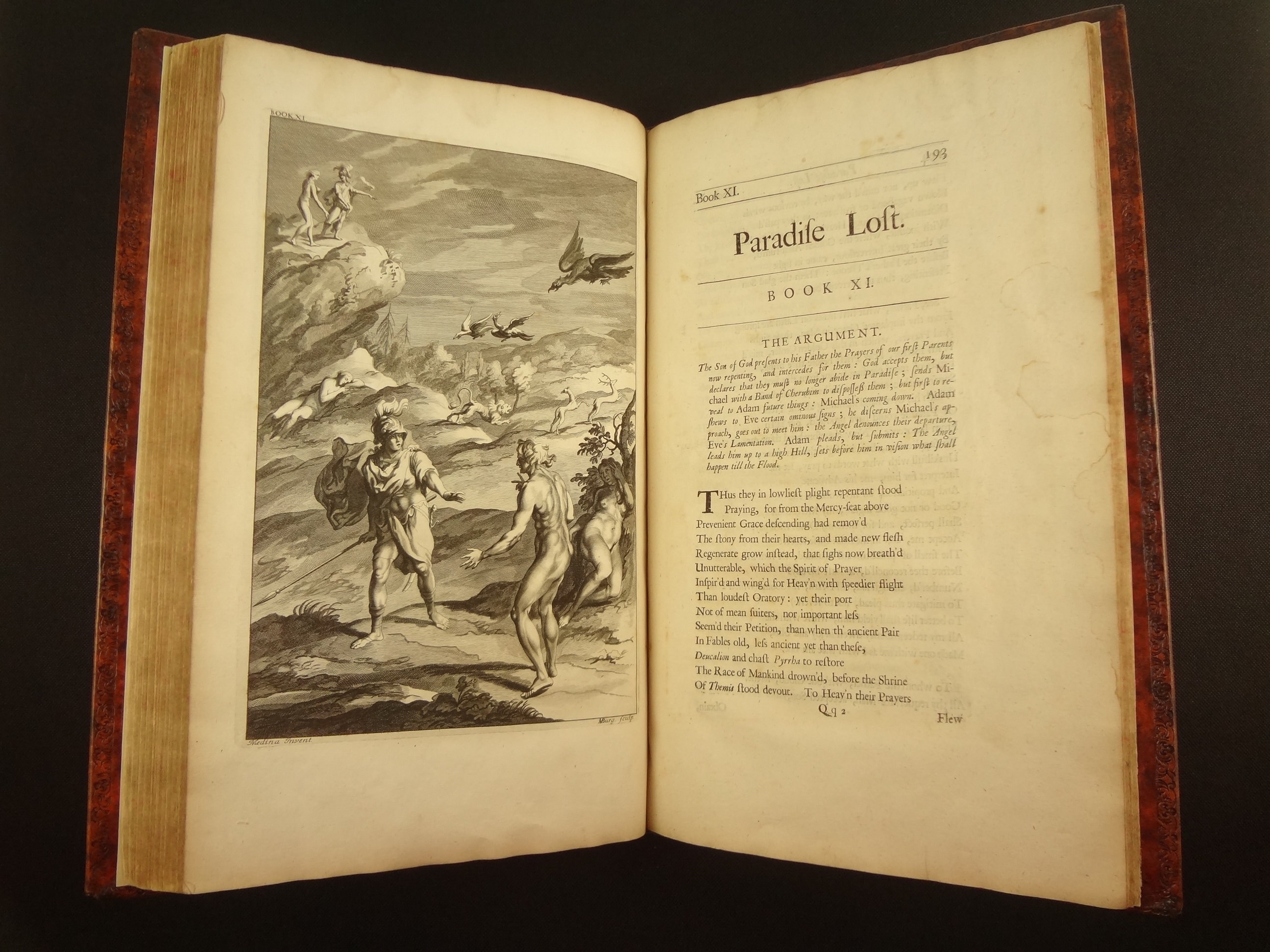 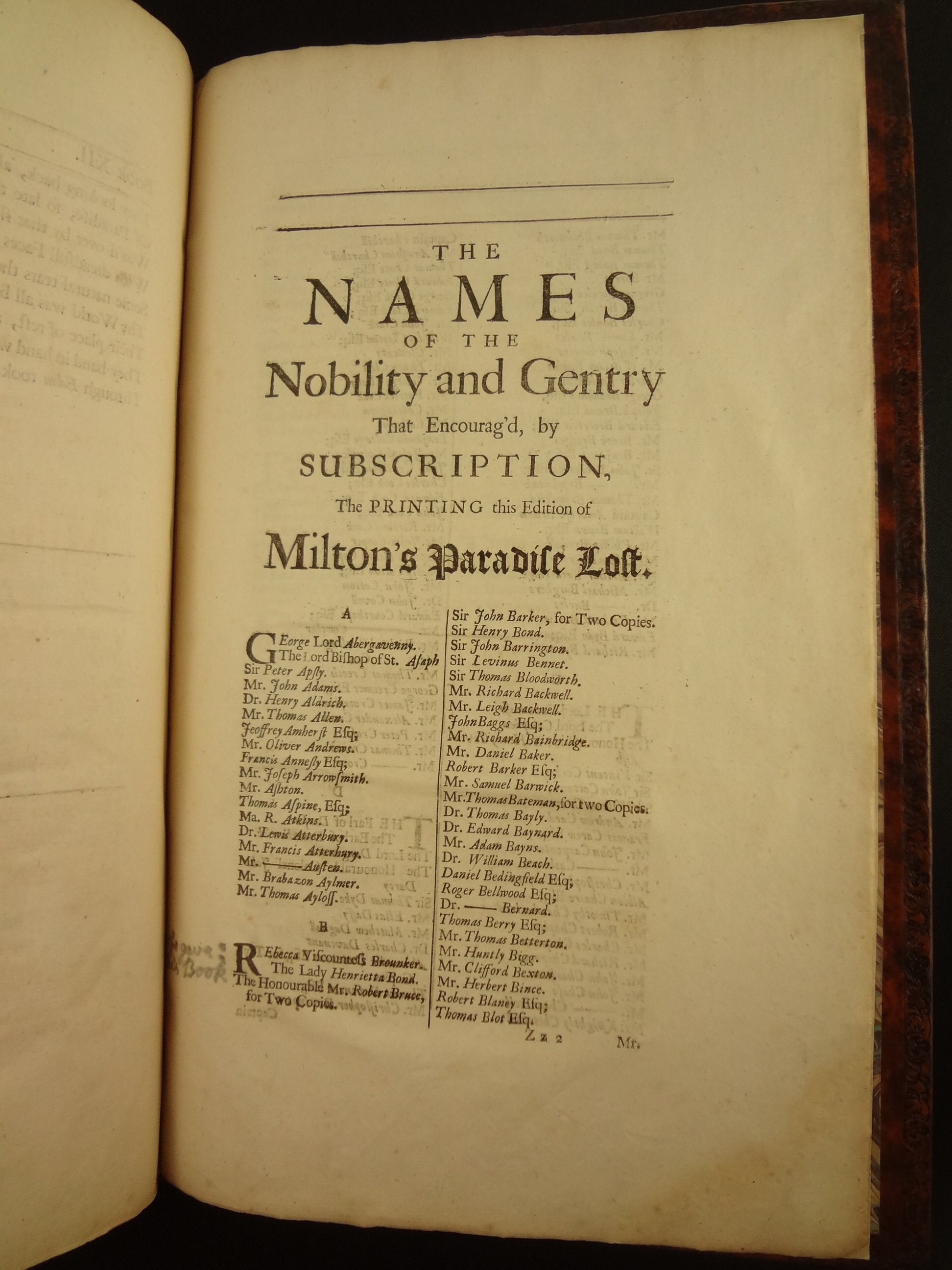 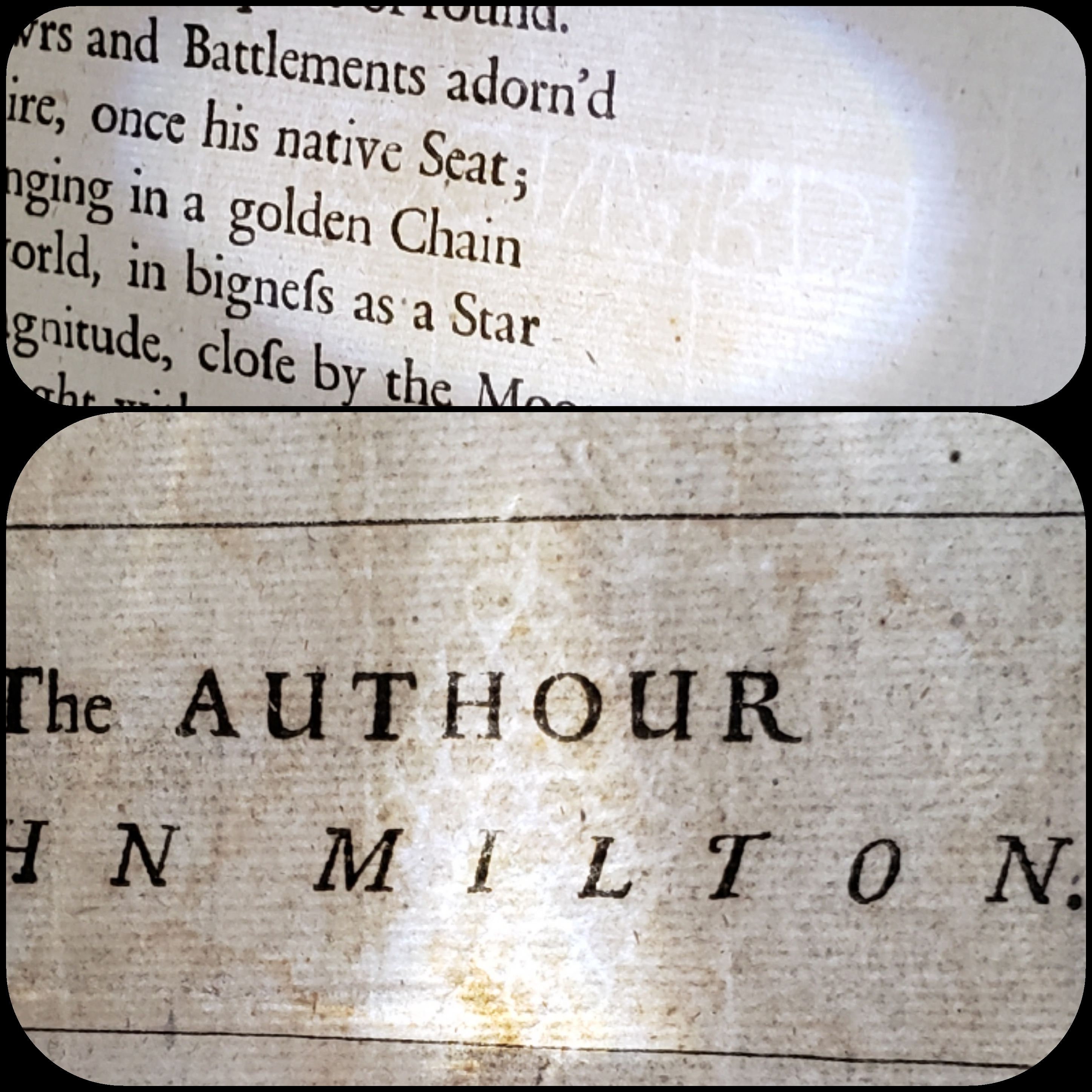 A rare opportunity to own the edition that is largely accredited with helping establish John Milton’s Paradise Lost as a preeminent example of English poetry. This is an important and noted work in English literature. The fourth edition is the first edition to include woodcut engravings, illustrated wonderfully with examples of artwork by John Baptist Medina, and engraved by Michael Burghers, which enhanced Milton's reputation greatly. In addition to its important place in the history of English literature, this edition is also one of the first to be financed by subscription model.

The book for sale is missing one plate (preceding Book 9), but the often-missing frontis of John Milton is still extant. I will supply the missing engraving, in facsimile, printed on acid-free laid paper (8.5x11) from a photograph on hand from the last time I sold this work.

Delightful contemporary (one even dated 1688) graphite annotations throughout seem to be highlighting passages regarding marriage and overall give the indication of being notes to a well-loved spouse.

“The folio edition with title pages dated 1688 exists with three slightly different title pages , and printed on two different paper stocks . Apparently , except for the title pages , none of the type was reset ; but the large paper stock , with watermarks in two places on the large sheets before folding , one the name I CONARD enclosed in a loop and the other a bunch of grapes a little over an inch long , in the twelve copies at Illinois occurs always with the Bently , and the Tonson title pages . The smaller paper stock , with one watermark consisting of three initials and the other a foolscap , occurs only with the Bently - Tonson title page.” – Fletcher, John Milton’s Complete Works, v.3 p. 20, 1948

Information About the Work -

“Milton began Paradise Lost in 1658 prior to his imprisonment and completed it in 1663. Following a brief account of Man’s Fall, he takes up the story with Satan and his angels lying on Hell’s burning lake, and closes the poem with the angel Michael leading Adam and Eve out of Paradise. Whilst early editions did not sell quickly, the fourth edition published in 1688 by Tonson and Bently, established the poem’s reputation as one of the great works of English literature.” (University College of Oxford, web article titled Milton’s illustrated Paradise Lost)

“By 1688, when England was on the verge of the Whig revolution, Milton's reputation had revived considerably. He was commended for his republicanism as well as his record as a defender of liberty. His supporters believed that his greatest poetic achievement merited this handsome, monumental edition. One of the earliest examples of subscription publishing, financed by Lord Somers, the fourth edition of Paradise Lost was the first to be printed in folio format and is the first illustrated edition, distinguished by high quality paper, large, clear type, and ample margins. Milton had previously reorganized the poem into twelve books (by splitting Books 7 and 10 of the original) to parallel Virgil's Aeneid more closely.” (from The Morgan Library’s catalogue description of their copy, PML 36799)

“This edition contains thirteen ornate engravings depicting the author and scenes from the poem. The (main) illustrator was John Baptist Medina (1659-1710), a Spanish artist deeply influenced by Rubens, and all but two of the designs were engraved by the Dutch artist Michael Burghers (1647/8-1727).” (University College of Oxford, web article titled Milton’s illustrated Paradise Lost)

“Although (Medina) appears to have painted other types of work than portraits, the only works other than portraits known to survive are his eight (out of a total of twelve plates prefacing each book of the poem) engraved book illustrations for the fourth edition, the first to be illustrated, of Paradise Lost by John Milton, published in London by Jacob Tonson in 1688. Though they have been described, perhaps rather unfairly, as "stiff and archaic", these follow Milton's text carefully, unlike those of the artists used for the other prints, and usually include several different episodes in each illustration. Appropriately, Medina drew on traditional Biblical iconography, carefully and imaginatively adapting it to fit Milton's text. Medina's designs preface Books 3 and 5 to 11; the plates were engraved from his designs by a specialist, Michael Burghers (also Burgese or Burgess), a Flemish engraver working in Oxford, who signed all but one plate as the engraver.” (Wikipedia, John Baptist Medina)

This edition achieved a $10,000 Christie’s auction result in 2013, and current market offerings, for a complete work, are similar.

Of note, Jacob Tonson (the printer) so loved this work that when he his portrait was painted he chose to hold a copy of this work.

Annotation beside subscriber Rebecca Viscountess Brounker reads “who gave this Book”. Viscount Brouncker was a Viscount in the Peerage of Ireland, with their land in Castlelyons.

19th century title page note, “From the collection of the late Rev.d George Walker”, and the names “Tho: & Isabella” are scrawled at the top of the title page, being put there early as all other notes make way for them. These indicate (barely) this book belonged to the family of the Londonderry hero Reverend George Walker, his wife being Isabella and one of his sons Thomas; the Rev. had travelled to London in 1688 and the Viscountess may have gifted the work to him then, or it came into his possession in some other way… but this is purely conjecture. I’ve reached out to a Londonderry book dealer and no “collection” is associated with the Walker family.

Missing the engraving for Chapter 9, which will be supplied in facsimile from a photograph of another copy.

Twelve engravings, including the frontis and eleven preceding the chapters.

Please review the pictures posted. The binding is fresh, and in wonderful condition. I will nitpick the inside of the book, but overall it is a handsome copy, with wide margins, easy to open and read (not brittle), and a pleasure to own.

Occasional fox and rust spots throughout. Moisture mark at top margin of all the engraved plates, light. Some tears around the edges of the frontis, repaired with Japanese tissue, several of which extended into the portrait of Milton (also some darkening at top margin from where one of those torn areas was folded over). Frontis and title page have chipped corners. There is a moisture mark on the title page. Ownership inscriptions and annotations at top of title page; bottom corner tear repaired with tissue. Some thumbing and soiling to title page. Title page printing slightly askew.

After the title page and frontis, the condition improves and the book is generally clean considering its age. Occasional thumb throughout. Mark at top of page 16, marginal only. Corner of 17 chipped. Three circa 1.5 cm rust spots on page 63 which have ghosted the facing pages. Pages facing all plates toned. Other pages can, on occasion, be toned (roughly ten). Occasional marginal and in-line annotations, mostly regarding marriage (contemporary, one even dated 1688!). Occasional tiny candle/fire ember pin holes. 207/8 tear at bottom edge, margin, no text. Tear at top of 217/8 but possible paper error as deckled. Book IX plate missing. Pages 222 and facing 23 ink faded. Fingermark at top of 161 (but 261). Moisture mark at fore-edge of (293) -319. 2” tear at bottom margin of 297. Corner of lasted printed leaf (subscribers) chipped/folded, verso soiled.