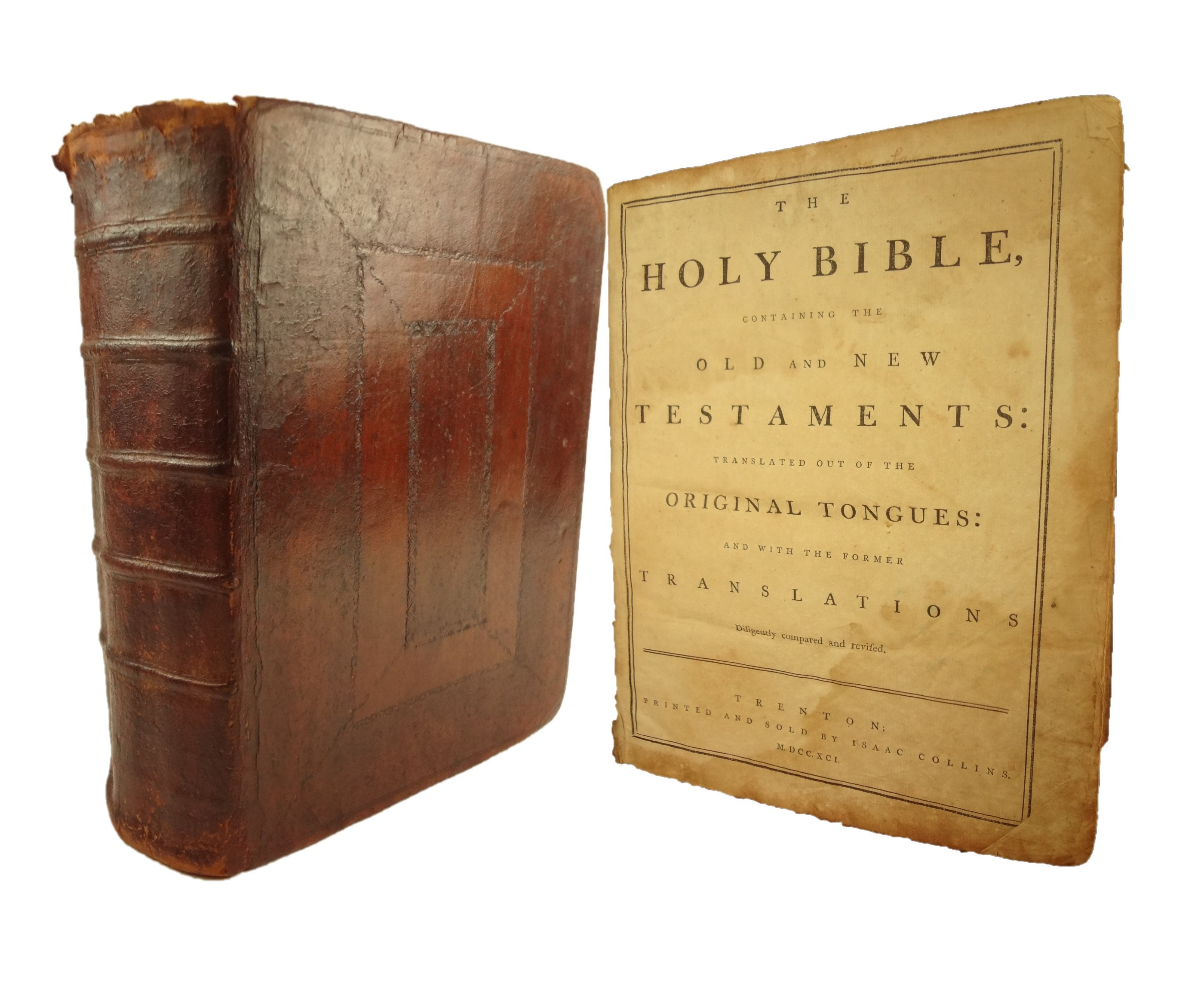 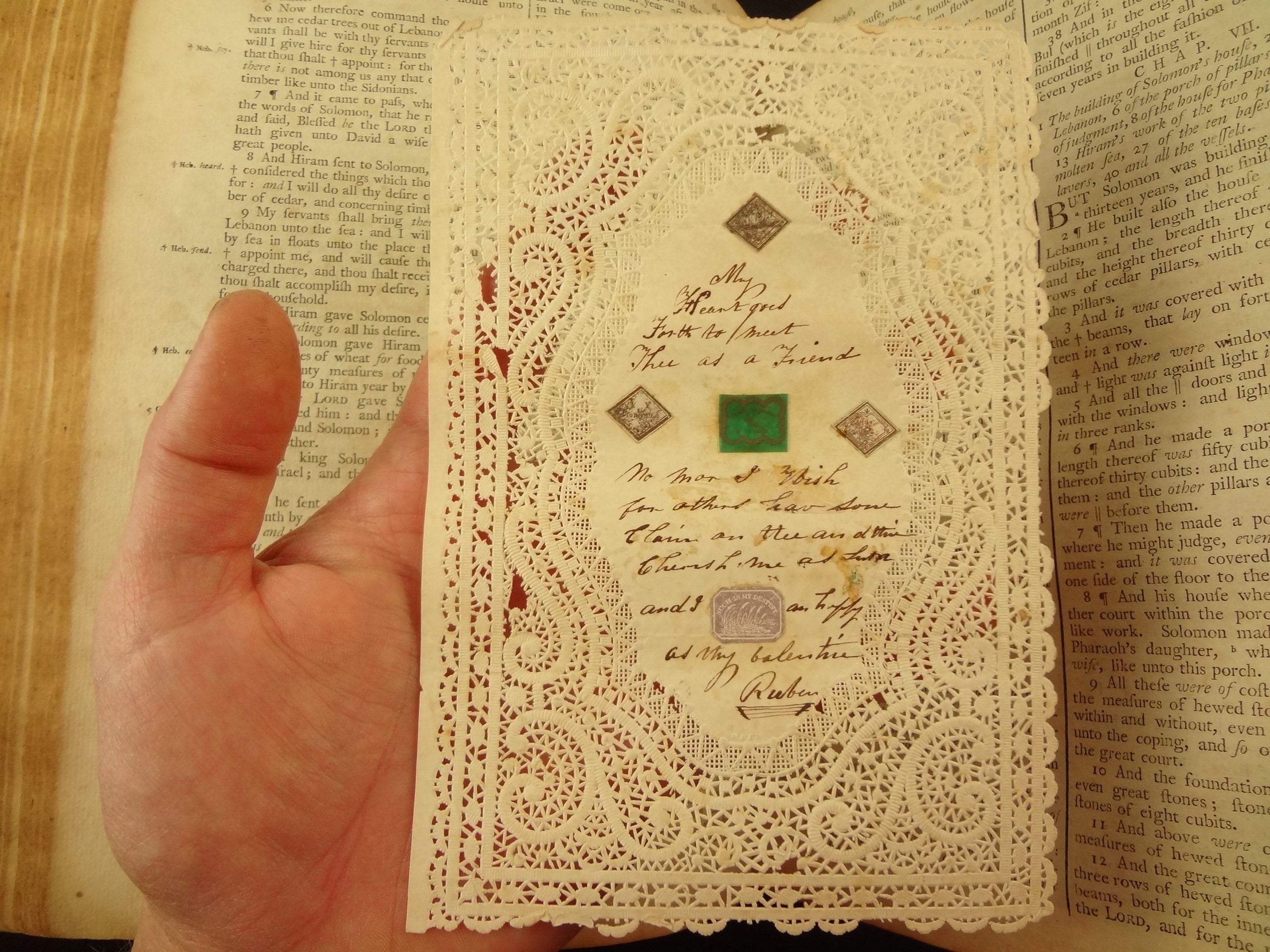 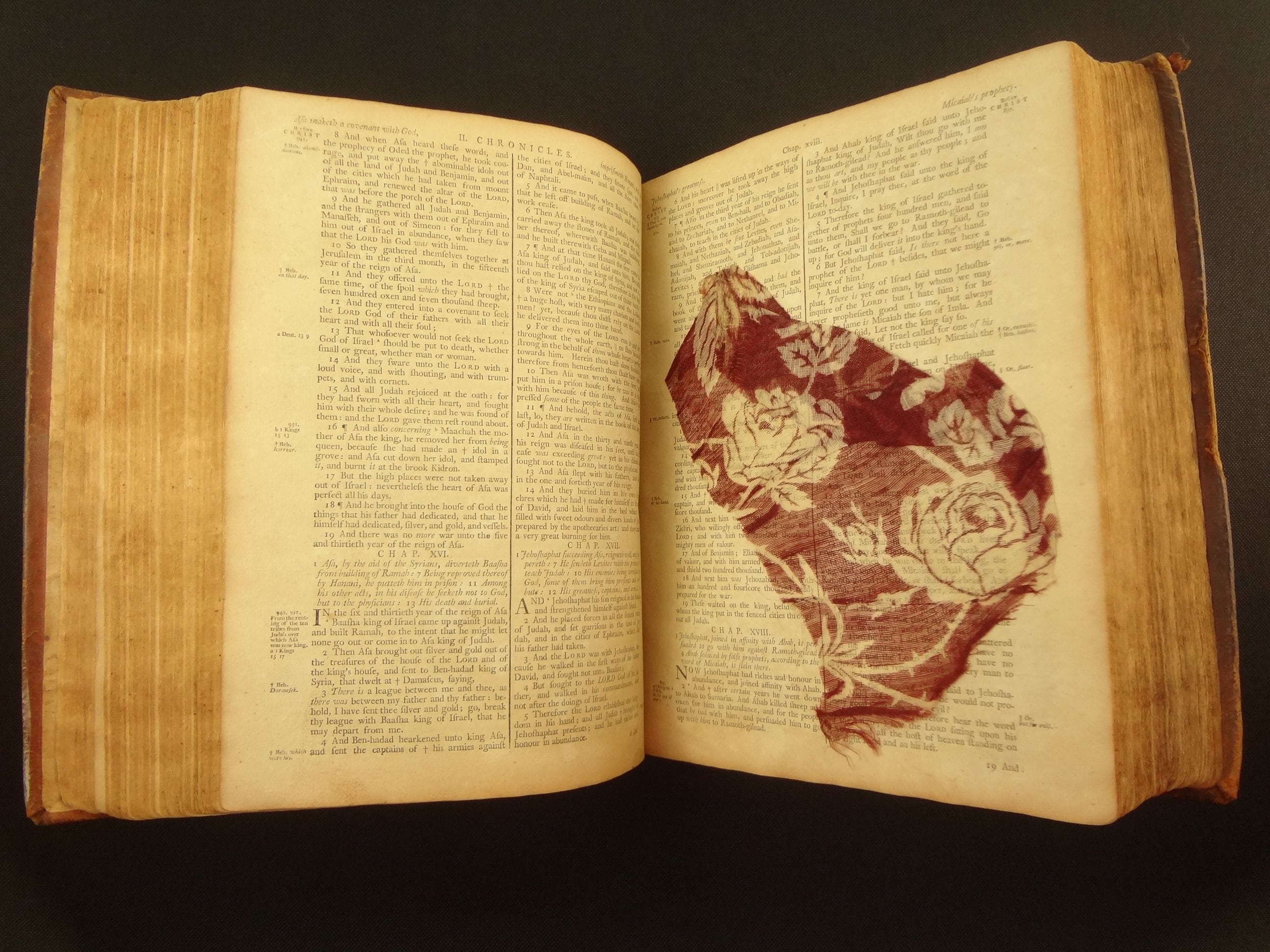 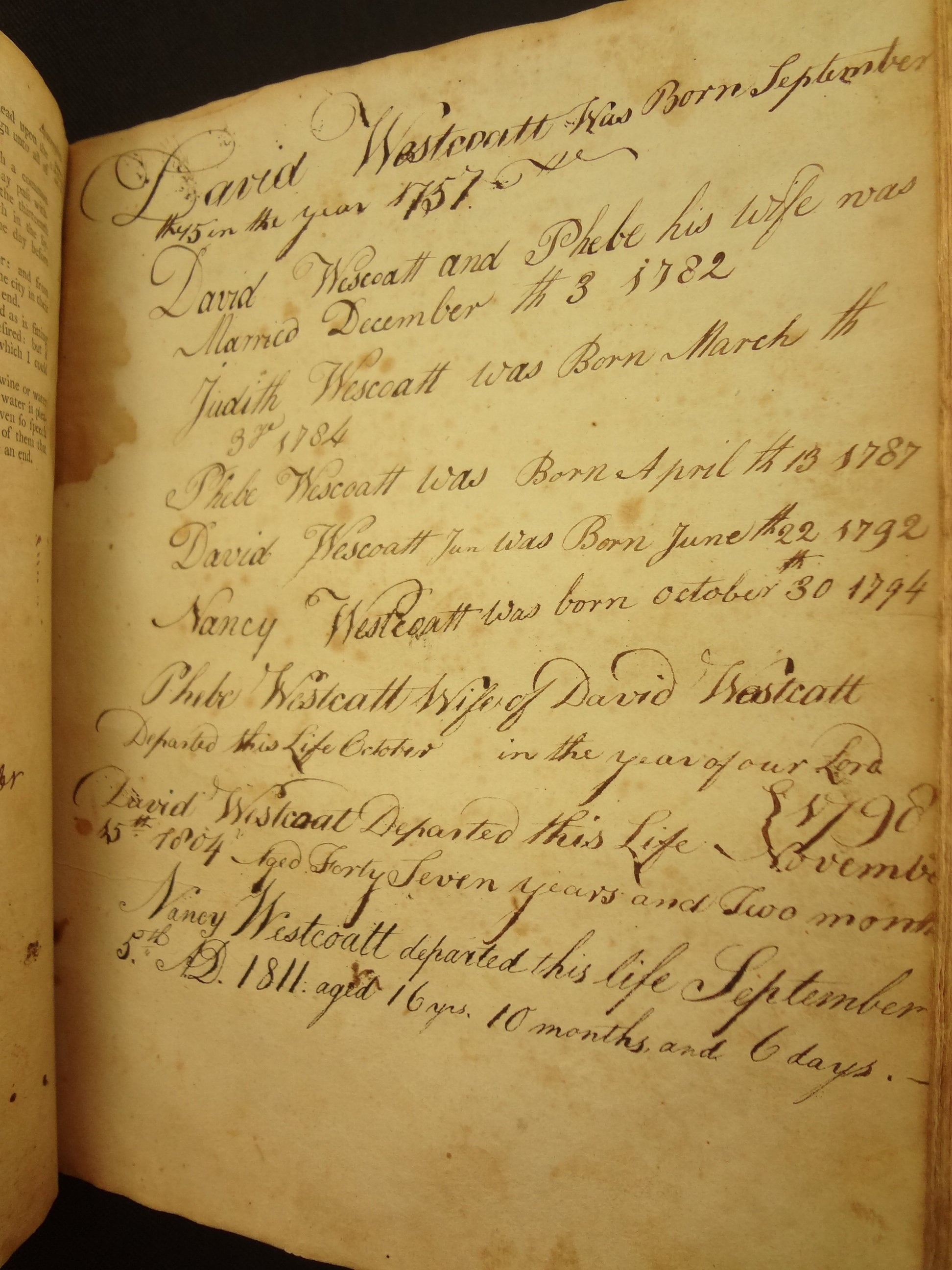 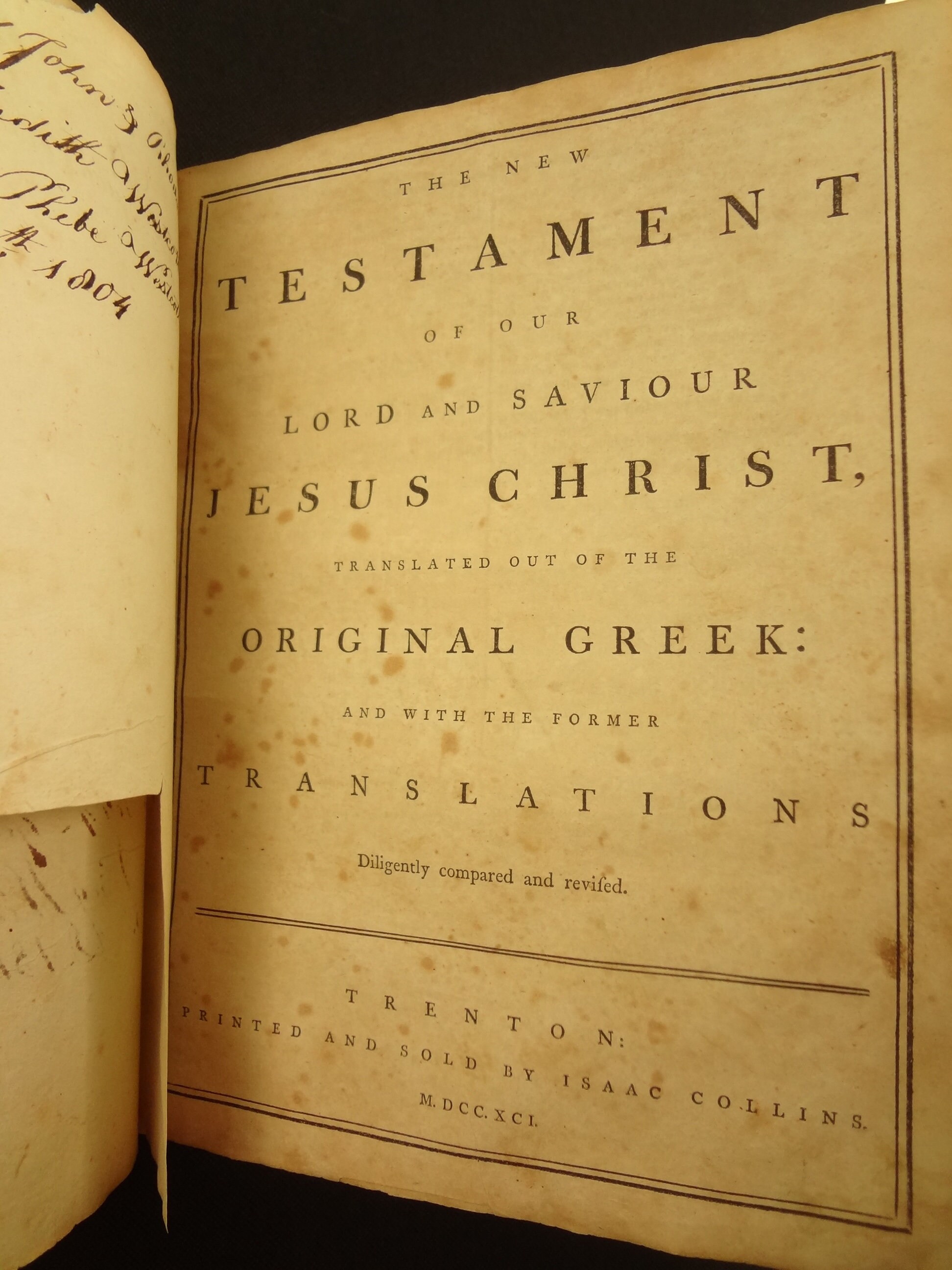 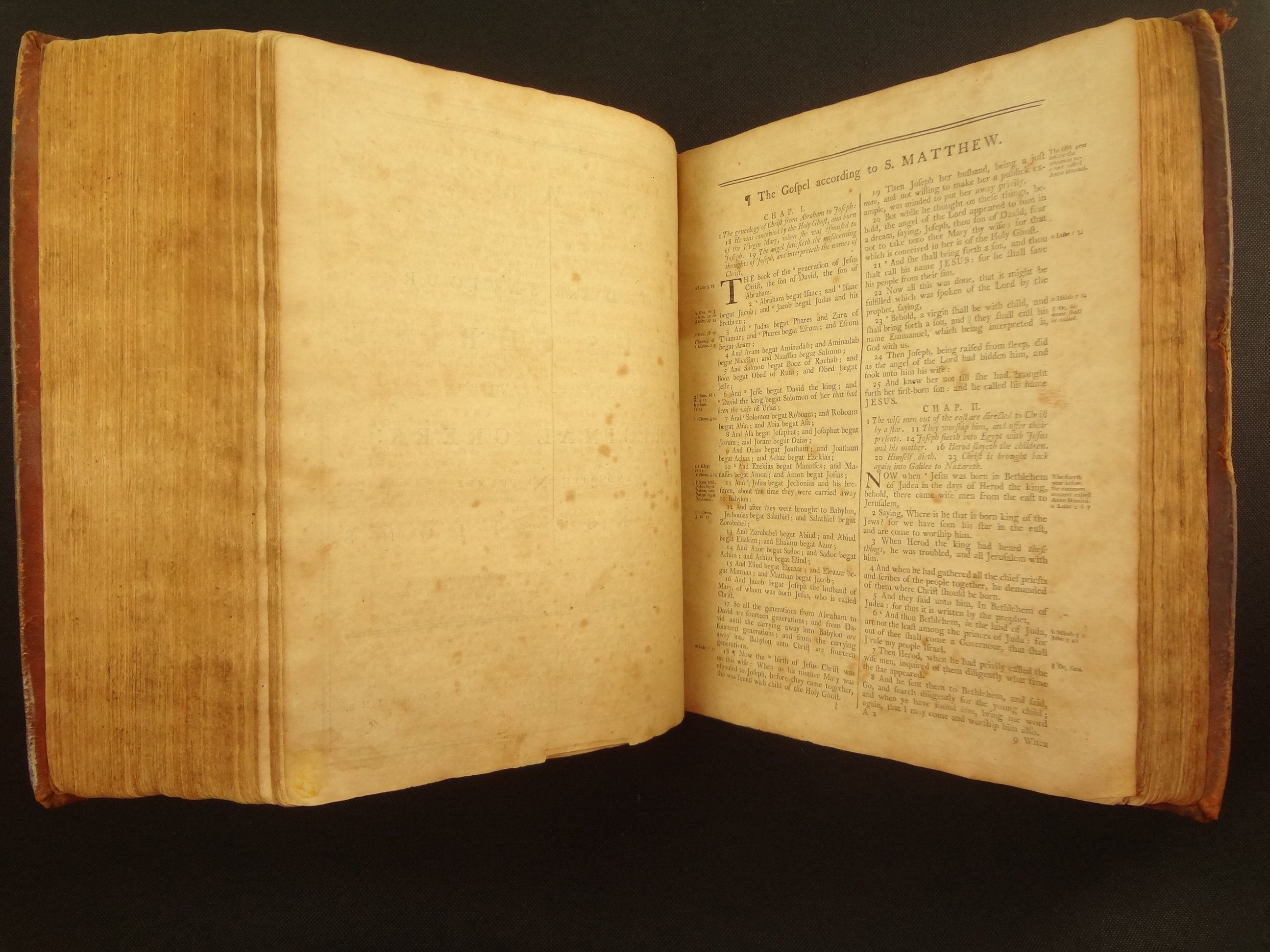 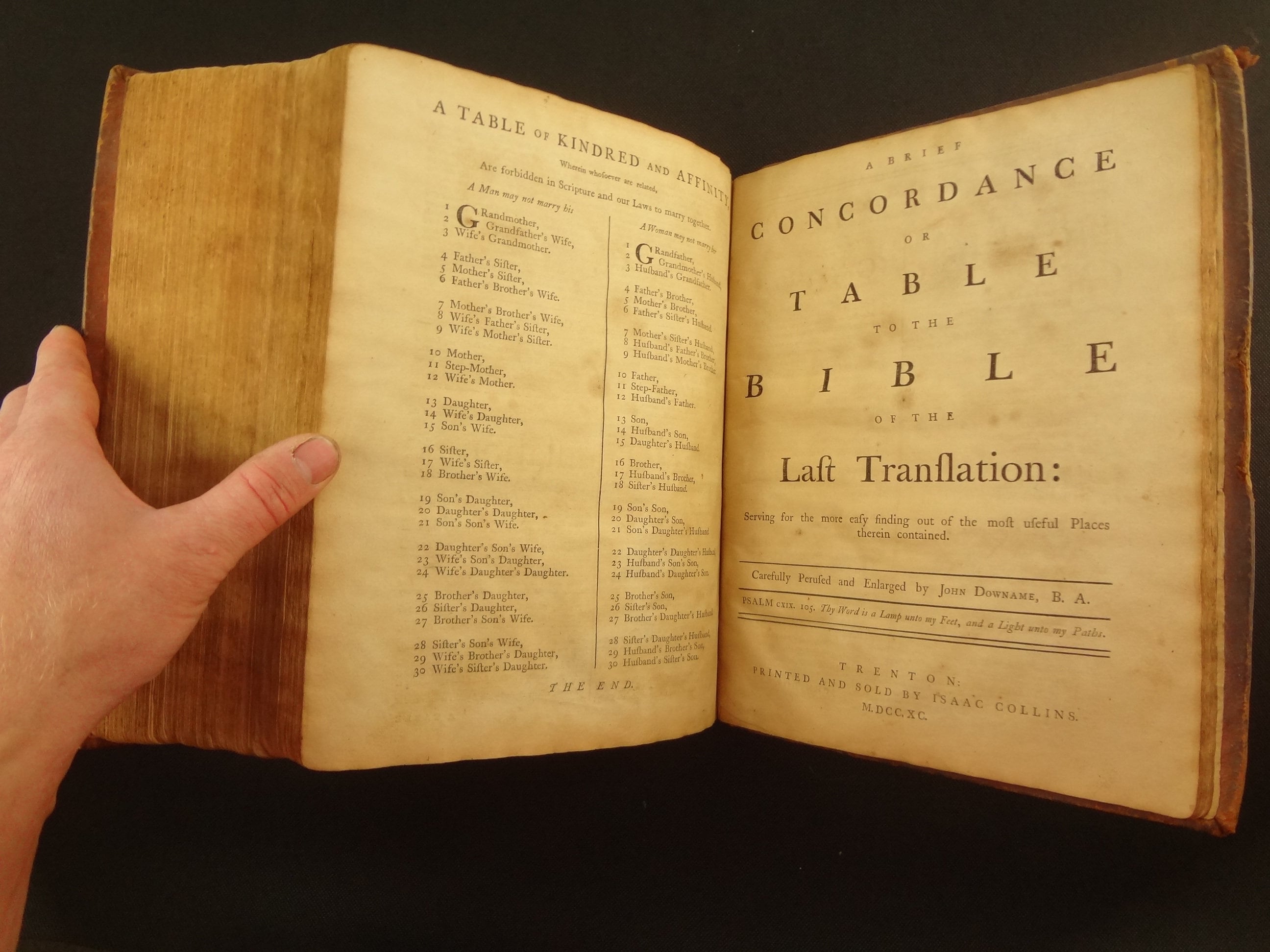 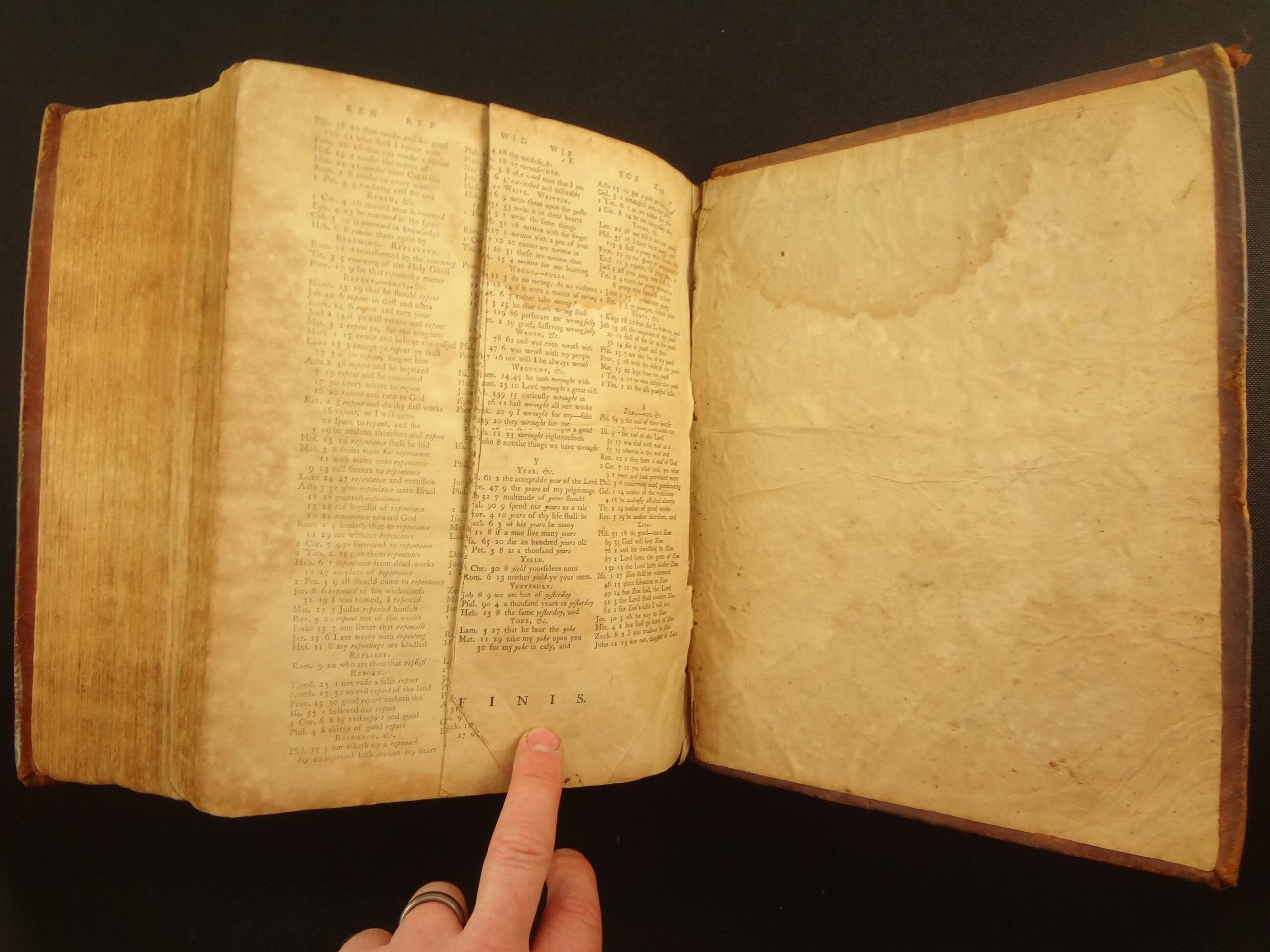 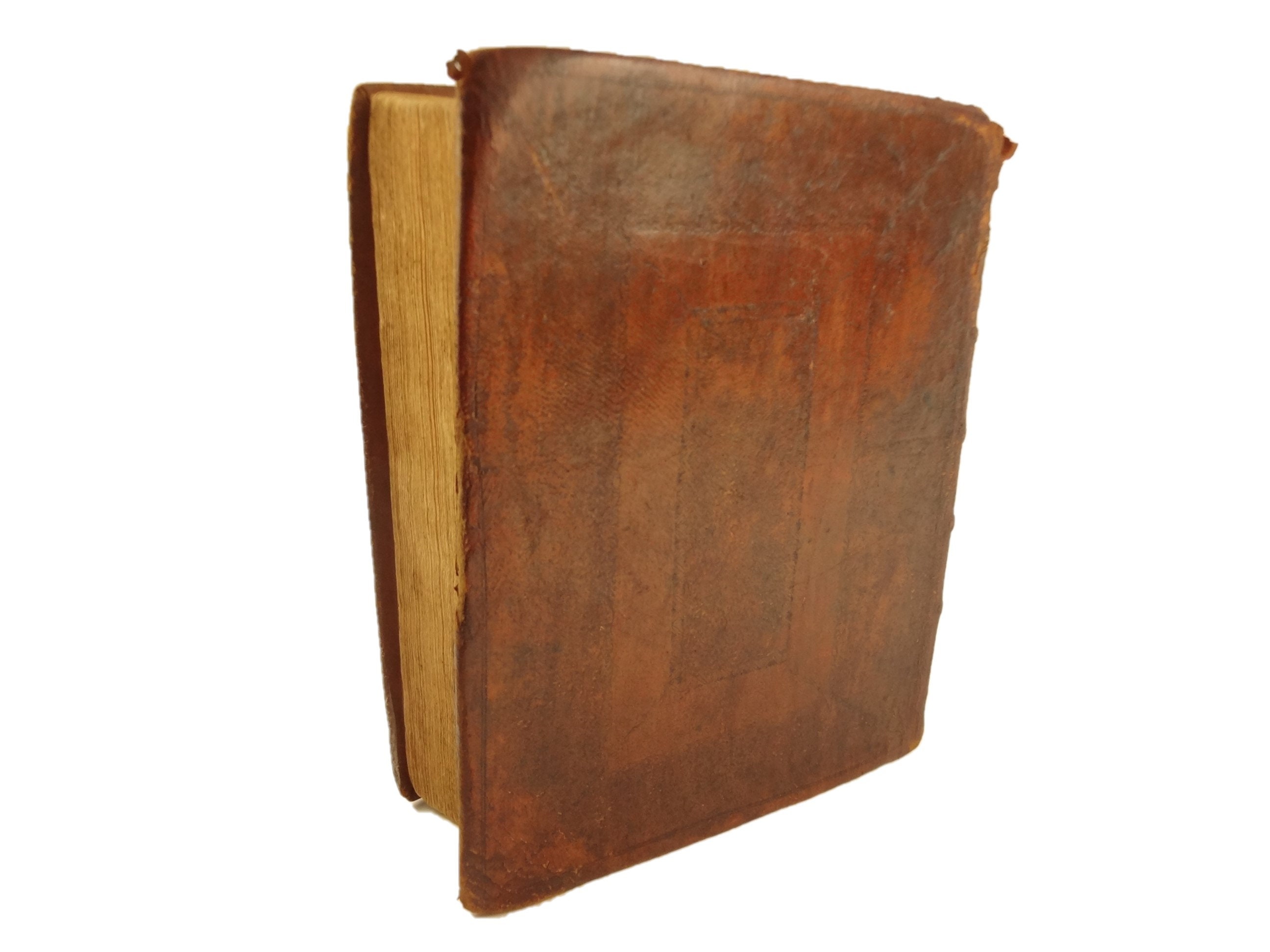 A very early (1791) U.S. printing of the English Bible, the first printed in New Jersey, and the third quarto (family size) Bible printed in America, preceded only by Isaiah Thomas' Boston edition of the same year and Matthew Carey's 1790 Douay Rheims (Catholic) edition.

England maintained a monopoly on the printing of English language Bibles previous to these printings; while America was subject to the British, Bible printers were required to have royal privilege and after the revolution the cost of importing the supplies needed to print the Bible were prohibitive when compared to the cost of buying Bibles from England.

This copy is notable for its hearty contemporary Cambridge-style binding, family notes, and various insertions relating to the families that owned it, and the times they lived in.

Inserted within you'll find the death notice of Mrs. Catherine Lanning (a Charles Lanning's name is at the top of the title page), a newspaper editorial defiling Grant as a candidate for President, an advertisement for discounted cloths, a 19th century valentine, examples of cloth and ribbon as place markers, religious ephemera from the 19th century, handwritten poetry, several pages of family notes between the testaments, and various flowers and leaves.

There is one place mark with pin points, reminding me of braille, and I couldn't help but think of Laura Ingalls Wilder's stories (braille, cloth, flowers, poetry, valentine, etc.). This book is a wonderful representation of an early American family's Bible.

Collins began collecting subscriptions for this edition in 1788. Matthew Carey, in successfully producing the first quarto English Bible before Collins, was aware of Collins activities and observed that his Bible would be for the one denomination Mr. Collins' efforts would leave out, Catholics (see notes on these printings in O'Callaghan's List of Editions of the Holy Scriptures... Printed in America Previous to 1860).

Collins struggled to achieve subscribers, partly due to his plan to incorporate the apocrypha and notes, and, after appearing at several conventions, wrote a proposal with the following compromise, "Subscribers...shall be supplied with Books containing either the Apocrypha or Ostervald's Notes, or both, or neither - as they choose."

This copy has the Apocrypha, but not Ostervald's notes. This may indicate the original purchaser's denomination. Also, probably still due to denominations, this copy does not have the "To the Reader" by Rev. John Witherspoon, D.D.. which can be found on the two leaves after the title page in some copies (in this copy, the first gathering is two pages, rather than four). The Baptists didn't want the Apocrypha, and Witherspoon was a Presbyterian; there is a hand-written hymn tucked within, which is found in the Methodist Hymnal (Retirement and Meditation), so perhaps this Bible went to a Methodist home.

John and Phebe Westcott, whose 18th century family history decorates the blank pages between the testaments, are buried in the Old Cohansey Graveyard in New Jersey, indicating the book didn't travel far after printing (see Find A Grave reference 133675256).

In the 19th century we find traces of a Charles and Catherine Lanning (who was married to a D.W., so Charles may have been a son). Catherine's Death Notice states, "a devout Christian, illustrating in death her faith in the efficiency of Christ as her redeemer in saving to the uttermost. Thus passed away a good woman whose praise is in the churches and greatly beloved by all who knew her".

The Lanning's were likely the New Jersey Lanning family, as there is an advertisement for "Fithian.. Fancy Goods... Bridgeton", a known 19th century Bridgeton, New Jersey, business.

Measures approx. 27.5 x 22 x 7 cm., quarto. Cambridge style binding, with three frames, in blind to the boards, connected at the corners. Spine is not decorated, with five raised bands.

The pages are not numbered, but I have collated the gatherings of printed pages using their signatures (small printer's mark at base of printed page):

See pictures. Vintage patina, with the pleasing look of history. Some edge wear, corner bumps, rubs, etc. to binding. Chipping at top of spine. Front board splays outward about 1 cm at fore-edge when off-shelf, but with the pressure of a nearby book closes completely easily.

Some moisture marks at title page that retract towards edges as you go in, and by Judges are only occasionally intermittent at margins; entirely free by Chronicles. Toning throughout. First 10 leaves have corners dog-eared, some chipping and edge tears, etc. from heavier use at front. Very faded name (Charles Lansing) at top of title page.

Concordance (second included printing/book) with fore-edge half missing from G3 to I4 (index letters R to Z).

No flyleaf at rear.

Despite condition notes, it is holding together well, handsome in its binding, easy to peruse, and delightful with its hidden treasures relating to the previous owners.