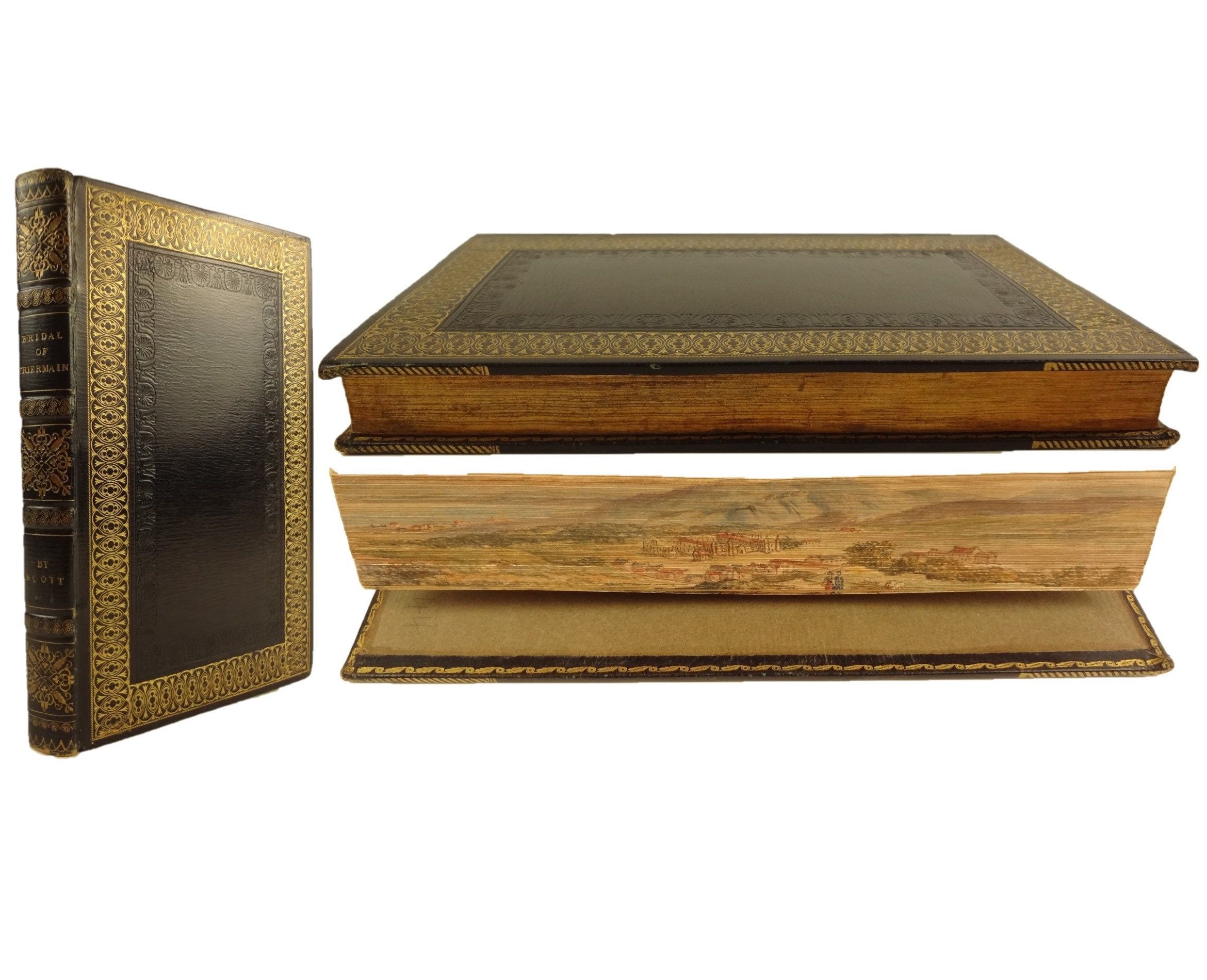 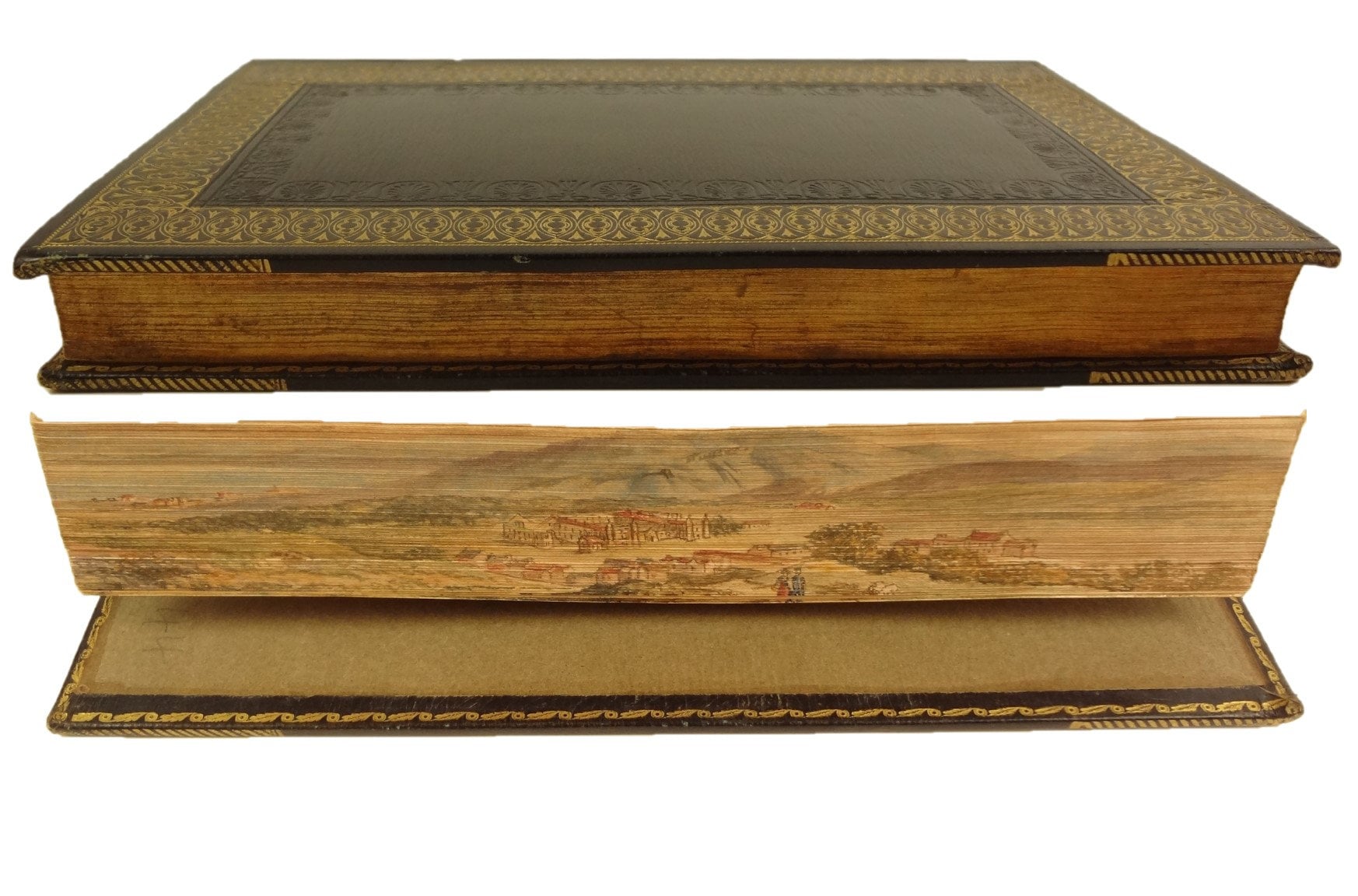 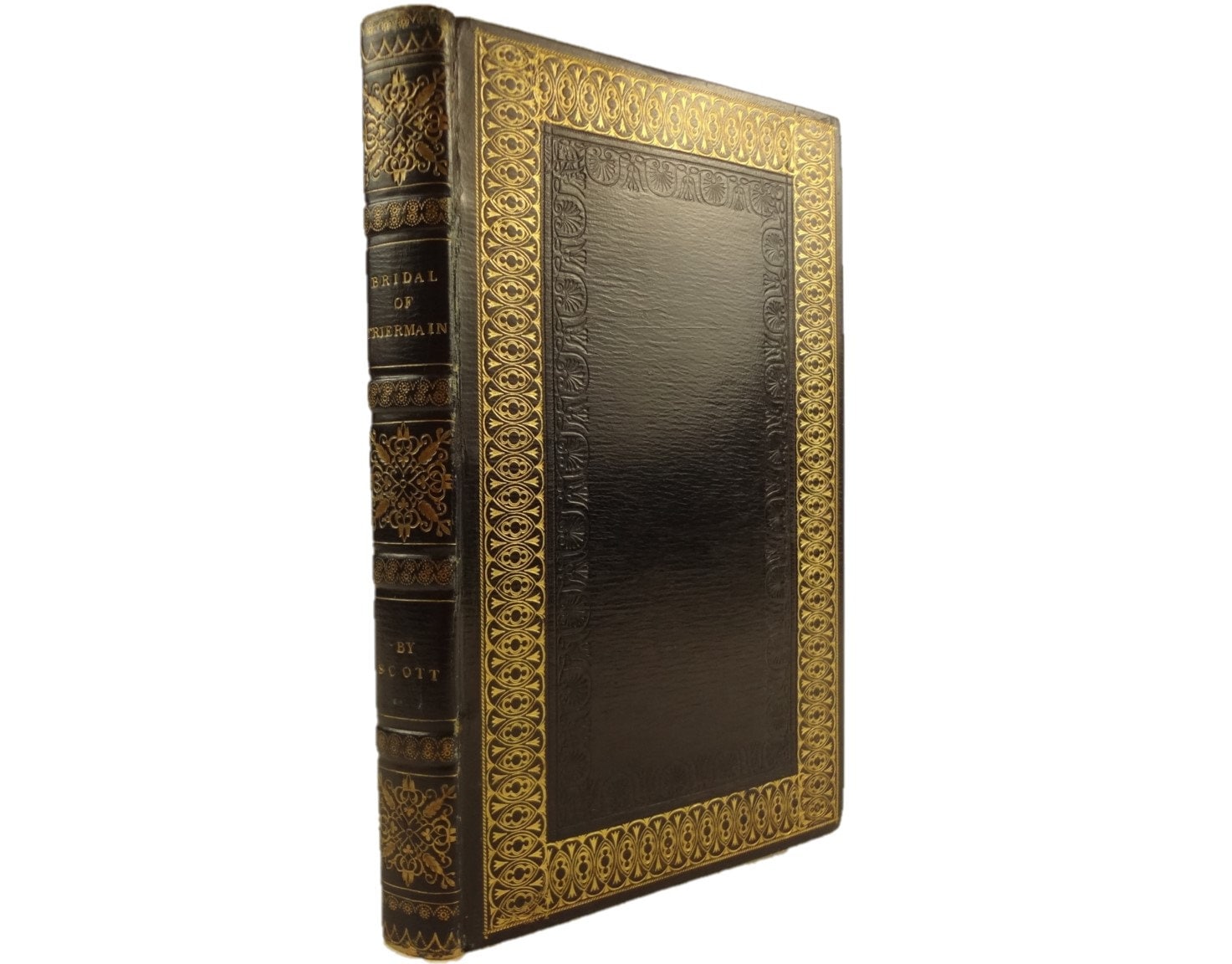 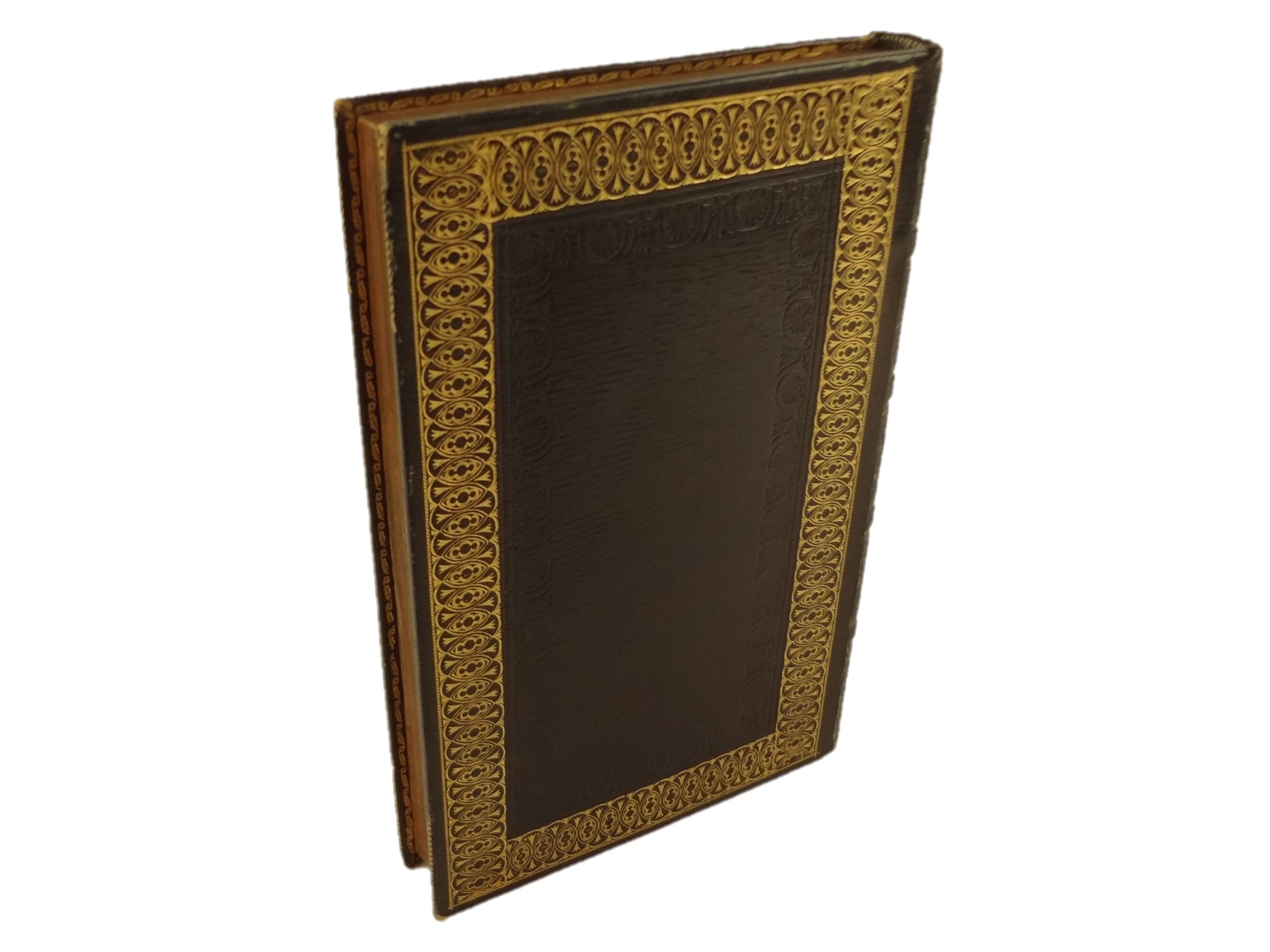 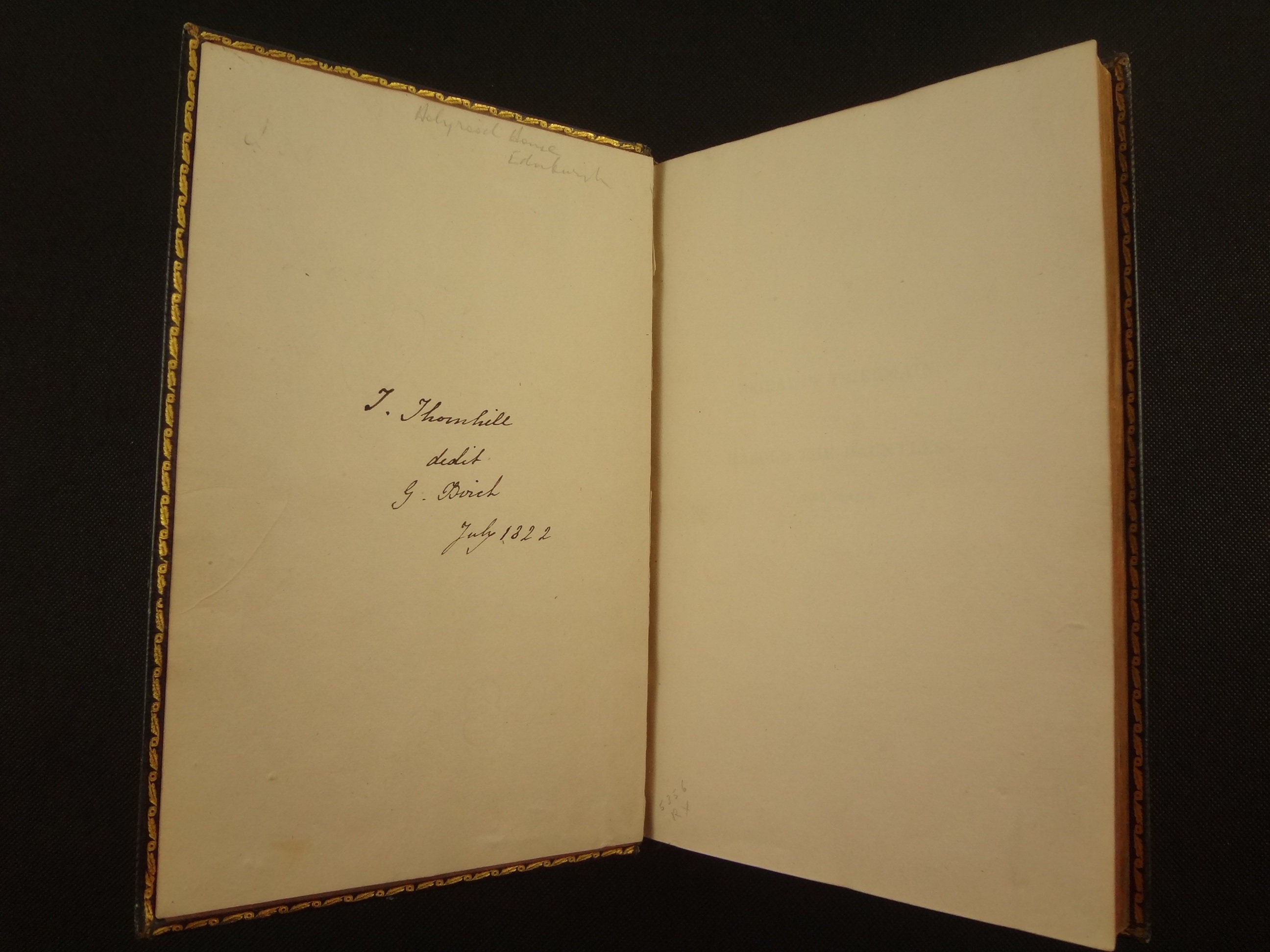 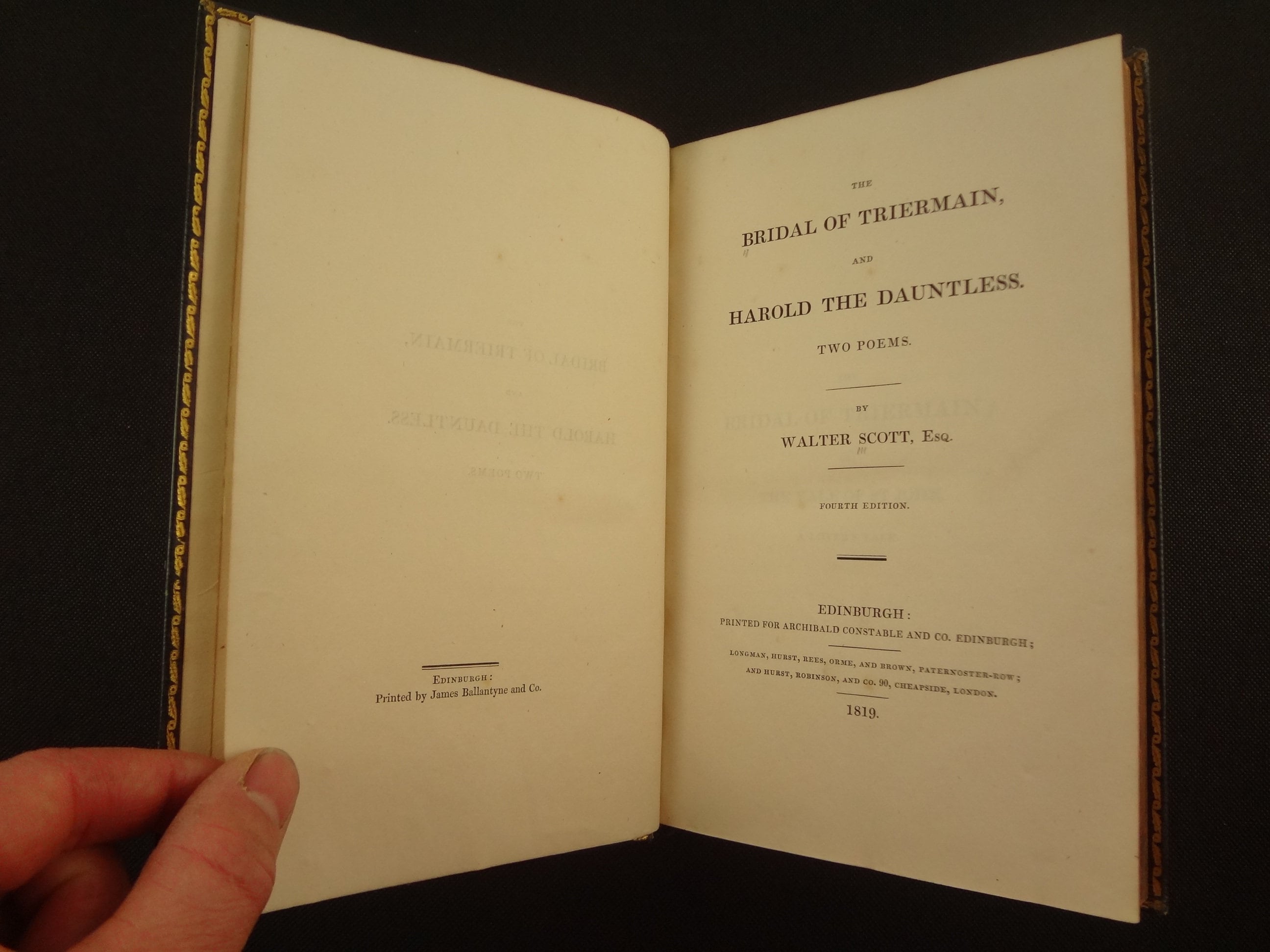 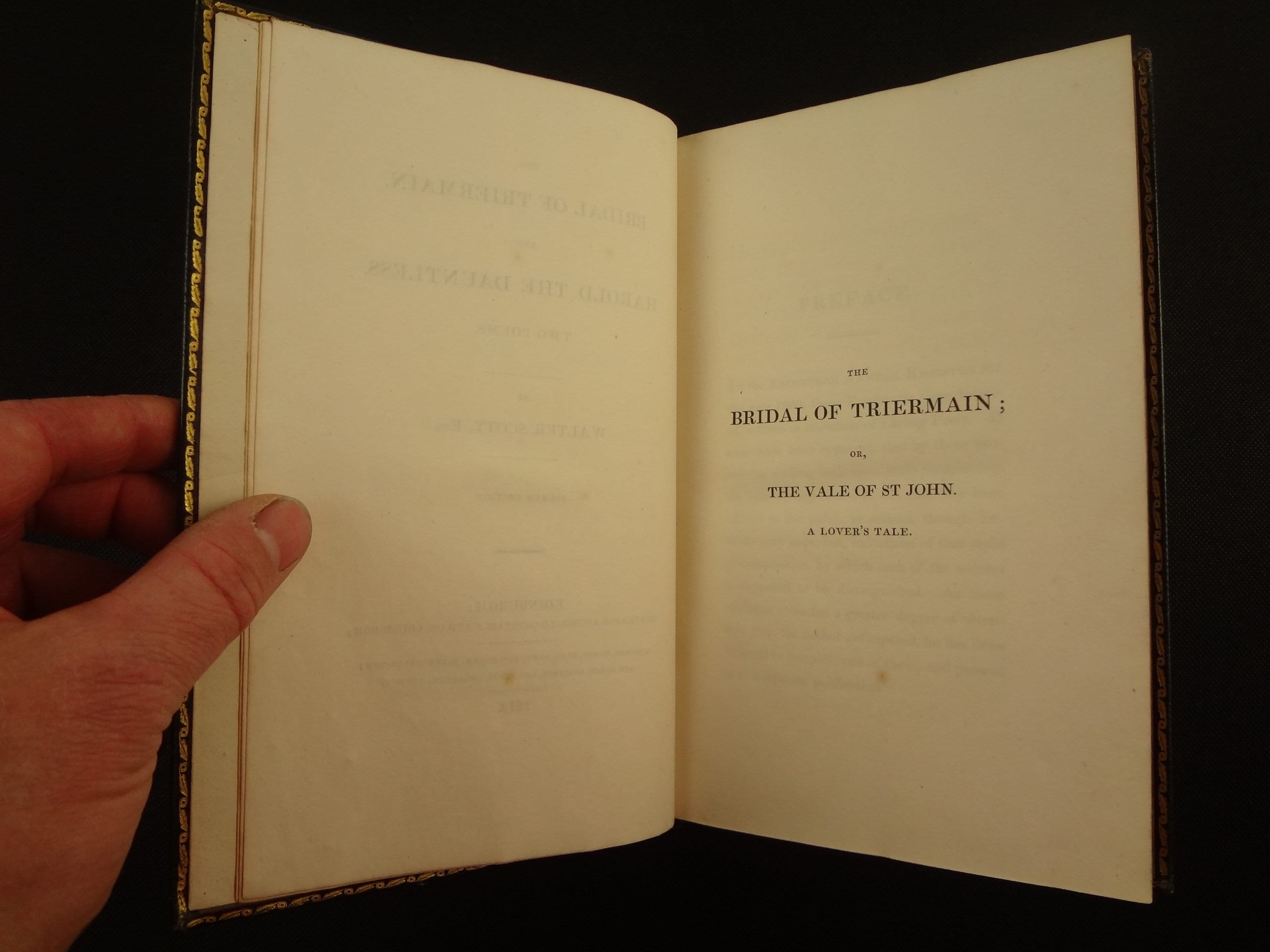 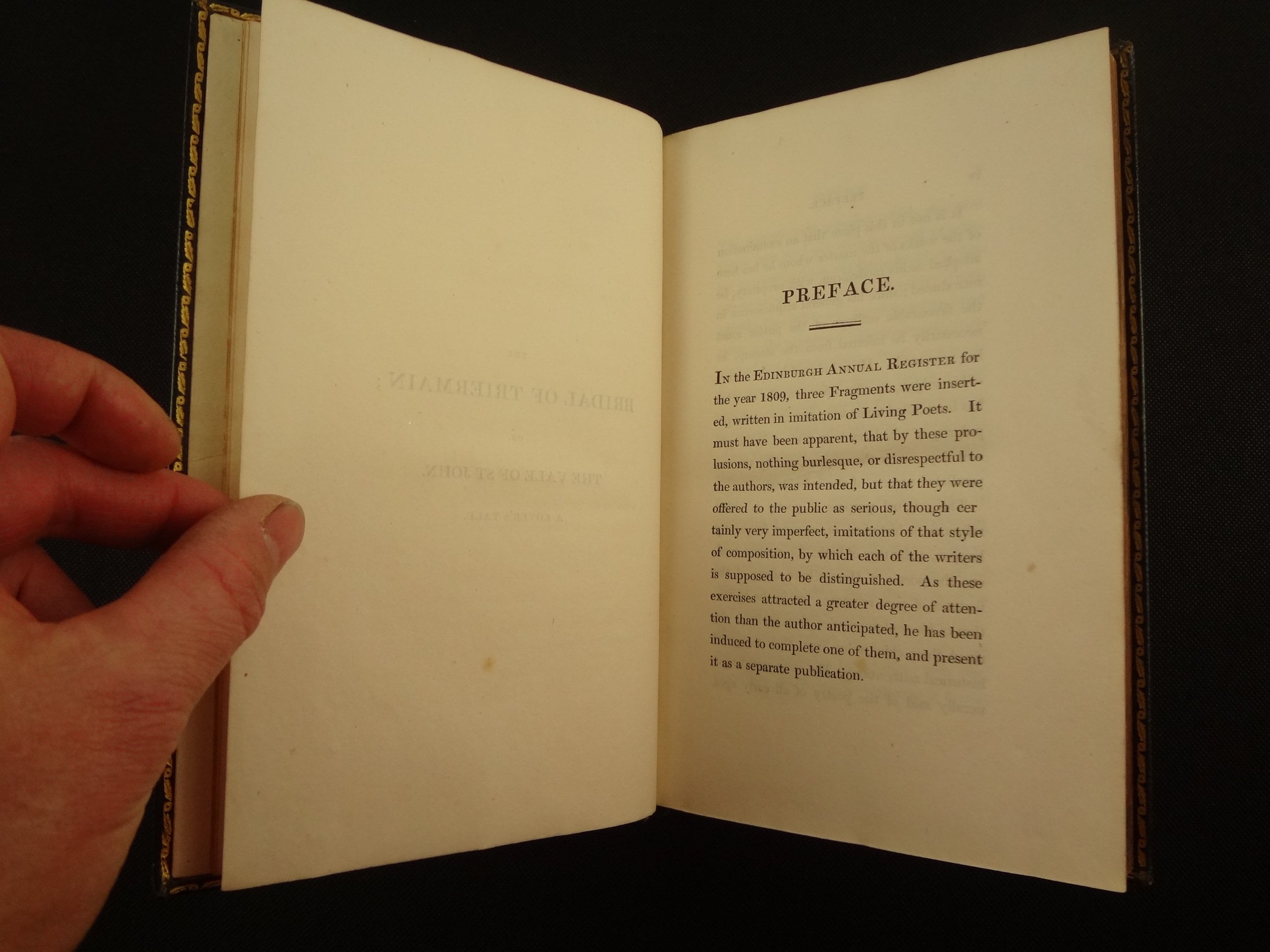 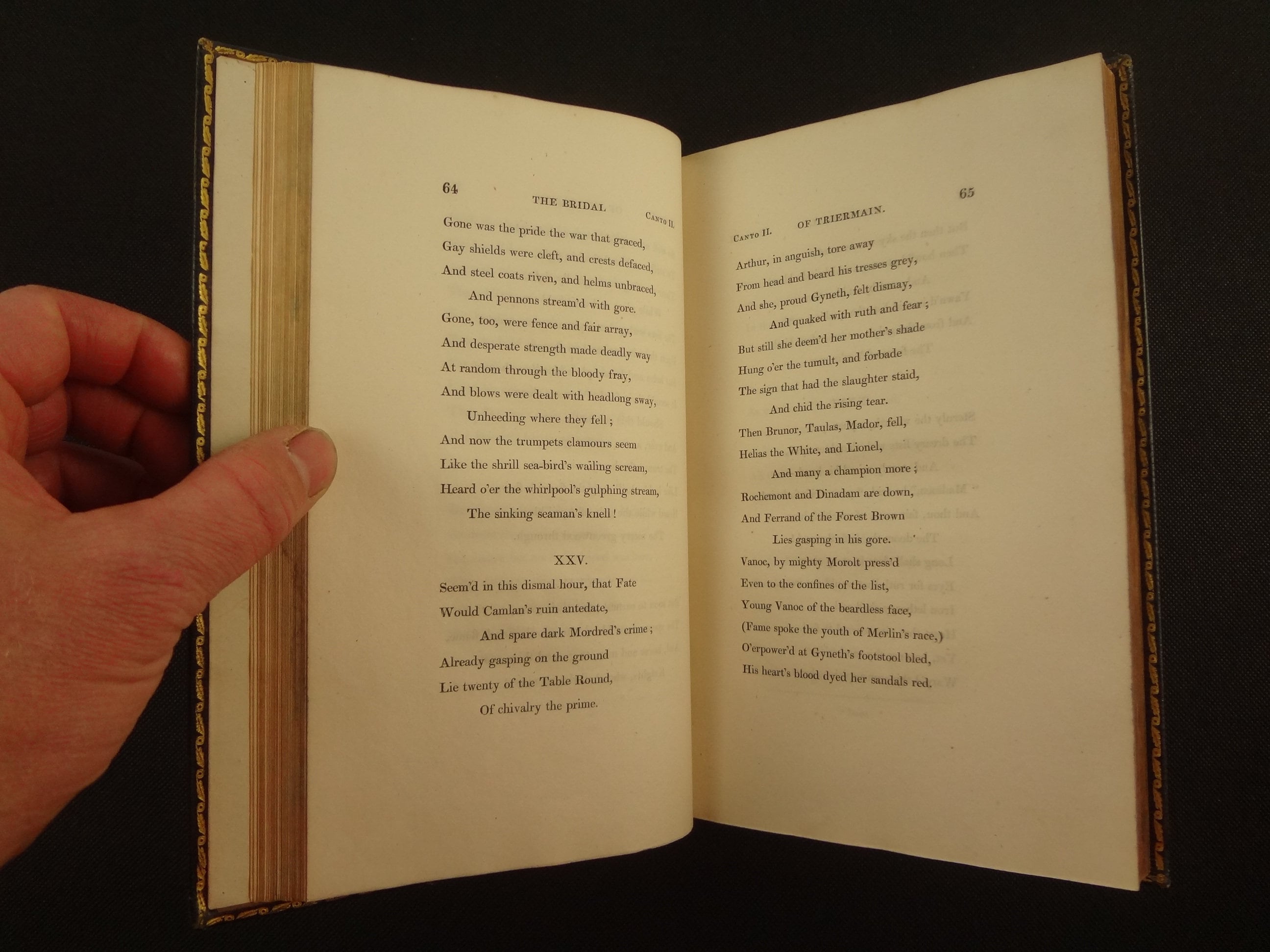 With a fore-edge painting of Holyrood Palace, a handsome Edinburgh edition of Walter Scott's The Bridal of Triermain and Harold the Dauntless. The fore-edge painting with a tasteful tie-in to the Scott's work; Arthur's Seat is prominent behind Holyrood and, perhaps, the true subject of the painting.

The Bridal of Triermain is a rhymed, romantic, narrative-poem by Sir Walter Scott, written in 1813. The poem celebrates the exploits of a knight errant - Sir Roland De Vaux - as he seeks to rescue (and hopefully espouse) a beautiful maiden, Gyneth. Gyneth is the illegitimate daughter of King Arthur: doomed by Merlin 500 years previously to an enchanted sleep inside a magic castle. The enchantment can only be broken by a rescuer both brave and noble enough to overcome the temptations used successively to distract and overcome prospective suitors, namely fear, wealth, pleasure and pride.

The poem is set in the countryside comprising the original Triermain fiefdom in the Barony of Gilsland in Cumberland. The fief was possessed originally by the old Saxon family of De Vaux, whose male line failed in the 17th century.

Harold the Dauntless is a rhymed, romantic, narrative-poem by Sir Walter Scott. The last of his long verse narratives, written in 1817, it weaves together elements of popular English legends and folklore using dramatic themes.

The poem recounts the exploits and the personal spiritual journey of a doubtful knight errant - Harold the son of Danish Count Witikind: who seeks to recover his lands and wed a suitable spouse. Scott described it as "a strange, rude story". It was largely inspired by the Old Norse sagas, with which his library was well stocked.Cleverly integrated into the plot is the story of how Harold gradually converts from the Norse religion of his ancestors to Christianity. The tale of Harold's conversion alludes to the progressive Christianization of England: especially during Anglo-Saxon times and up to and including the Middle Ages.

About the Fore-edge Painting -

This is only conjecture, but I present my evidence this is a 19th century fore-edge painting:

There is an 1822 "T. Thornhill" gift inscription on the verso of the flyleaf. On February 23rd, 2017, the Instagram account of Beckside Books Penrith posted a picture of another fore-edge painting, with similar gilt decoration, "from the library of the Thornhill family of Brockhall"; the Beckside copy had the stamp of Taylor and Hessey along the fore-edge of the boards. Taylor and Hessey were known competitor of Edward's of Halifax in fore-edge paintings. Other examples of Taylor and Hessey bindings are similar to the straight-grain Morocco binding on this copy; see the copy that Phil Pirages holds in his video on the history of fore-edge paintings loaded to youtube and titled Fore-Edge Paintings at the (approx.) twelve minute mark, or the example in the British Library Database of Bindings, shelfmark Davis 220.

What I don't like about this theory is the Scottish printing, and the Edinburgh painting; they don't seem to be in the flavor of a Northamptonshire Sheriff (as the Thornhill's had a long history of being Sheriff).

Measures approx. 22 x 14 x 2 cm.. Straight-grain Morocco. Boards with an elliptical and tassels roll in gilt for outer-border, and a palm fronds and flowers inner-border in blind. Some gilt to bord edges and turn-ins rolled with leaf-dot pattern in gilt. Spine with four raised bands with dentelle gilt decoration over them, three compartments with a rich central gilt decoration of interlocking fleur-de-lis, leaves, etc., two compartments with "Bridal of Triermain" and "By Scott" in gilt, rolls at top in bottom in gilt (mostly dentelle). White and grey endbands. Plain grey thick-stock endpapers.

See pictures. A little wear to edges and joints. Some bookseller and binder numbers written on endpapers. 1822 Gift inscription at rear of flyleaf, "T. Thornhill dedit G. Birch July 1822", and an erased pencil note barely visible. If you look down in to the gutter you can see a little paper cracking between the flyleaf and 1st blank unpaginated endpaper. Occasional pin sized rust spot and marginal foxing (very occasional). Occasional dog-eared page. Mostly very clean inside, with nice wide margins. Fore-edge painting occasionally bleeds onto fore-edge of page. Fore-edge painting a little faded. A handsome book, quite pleasing.