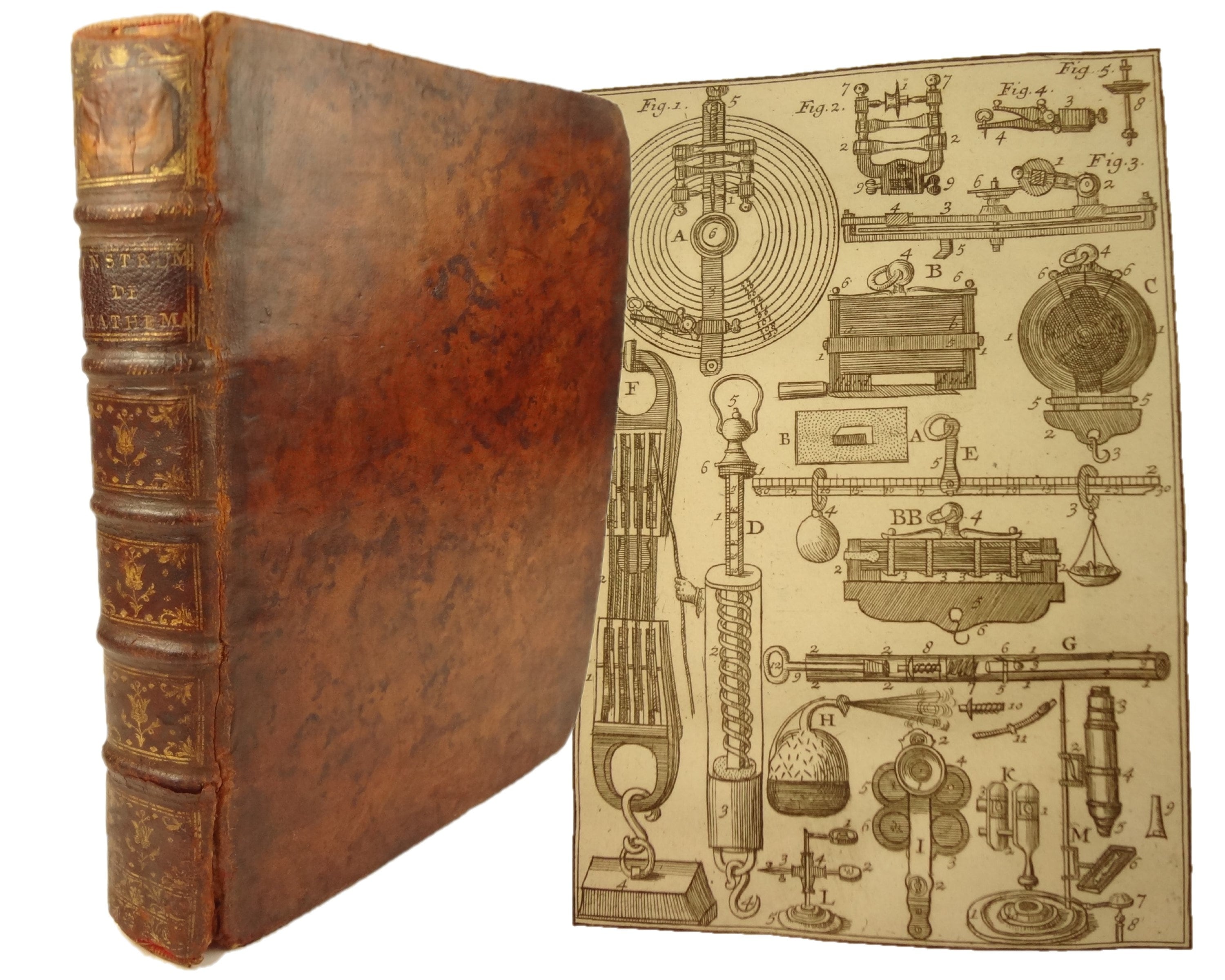 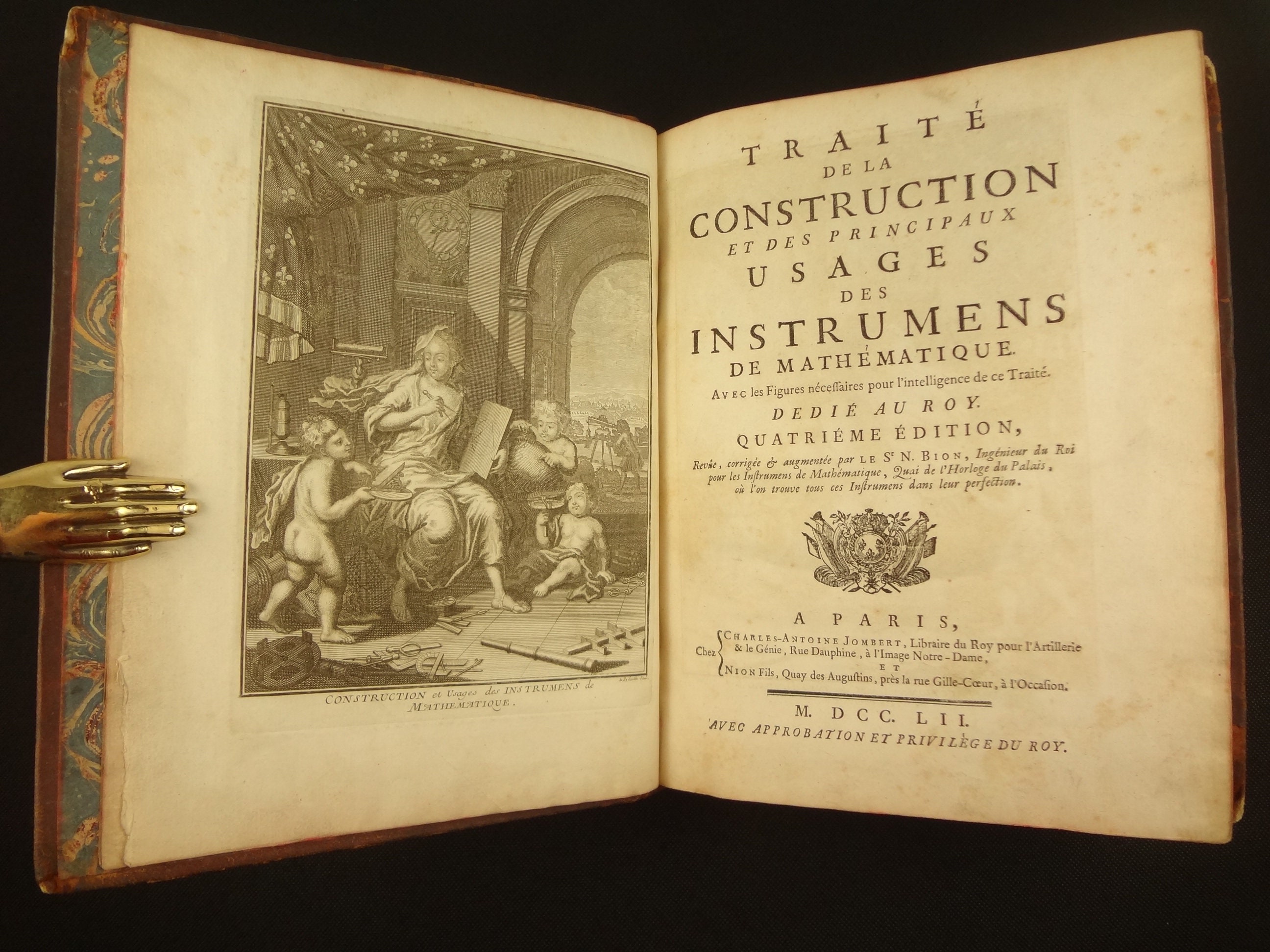 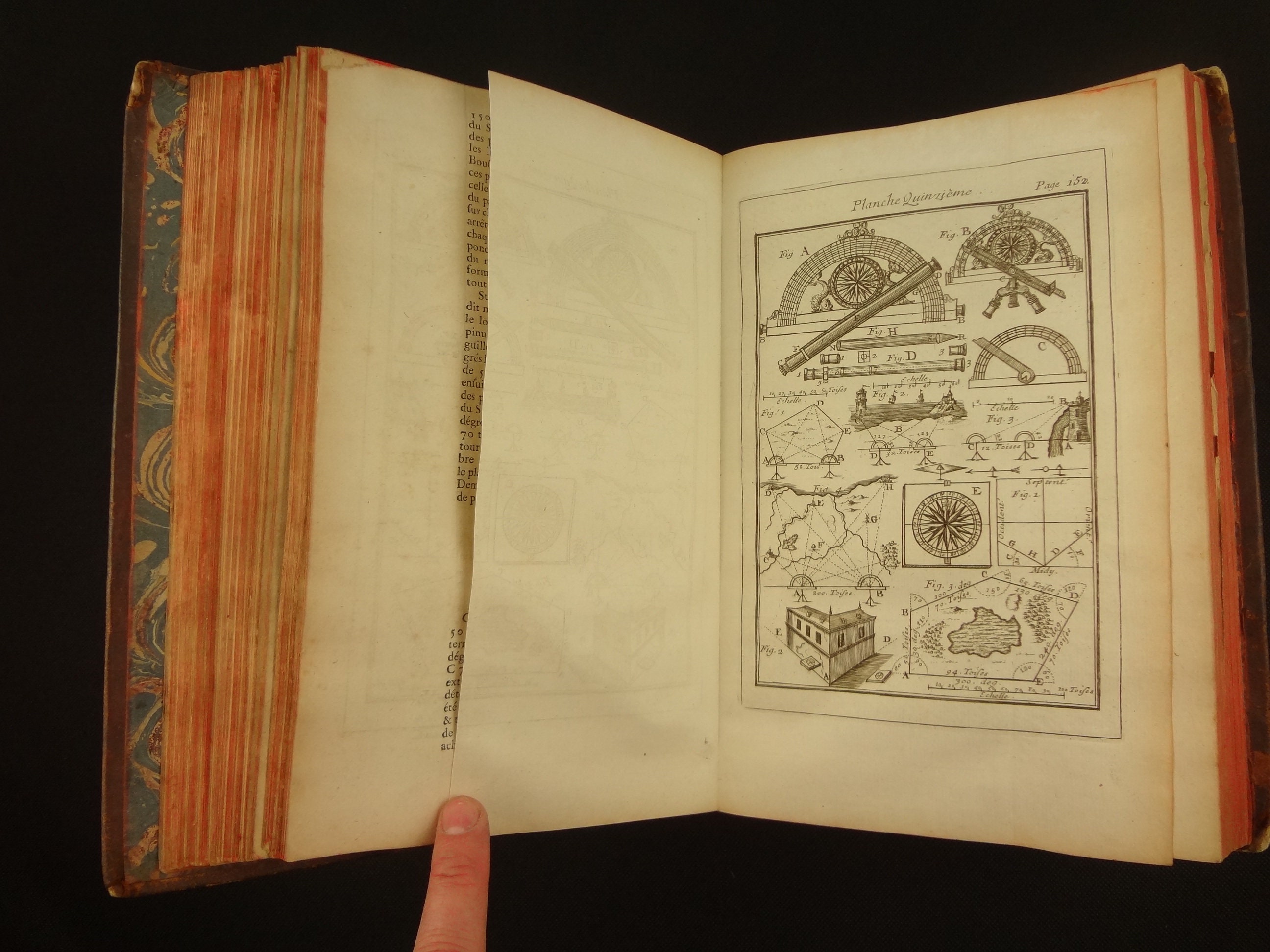 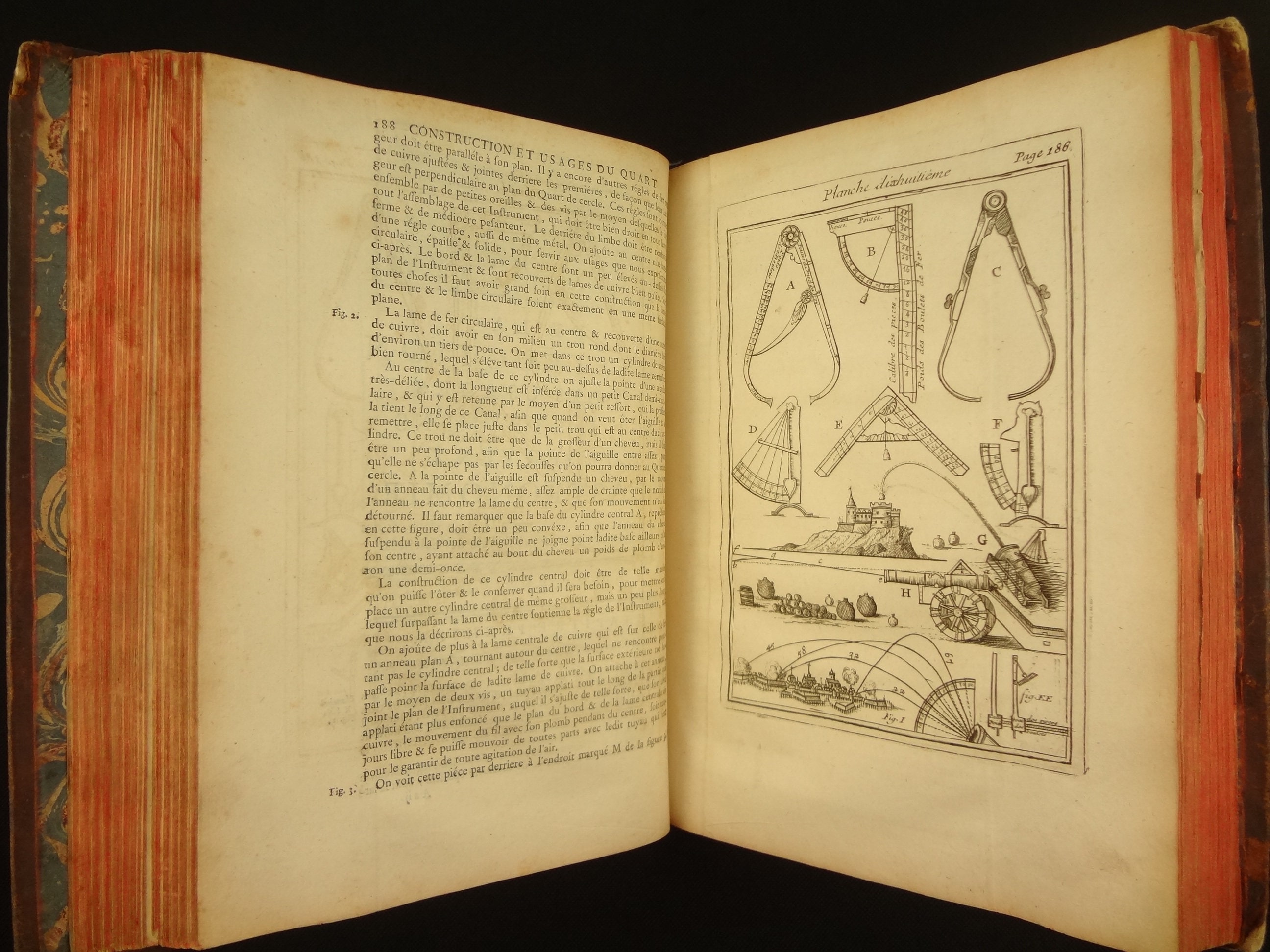 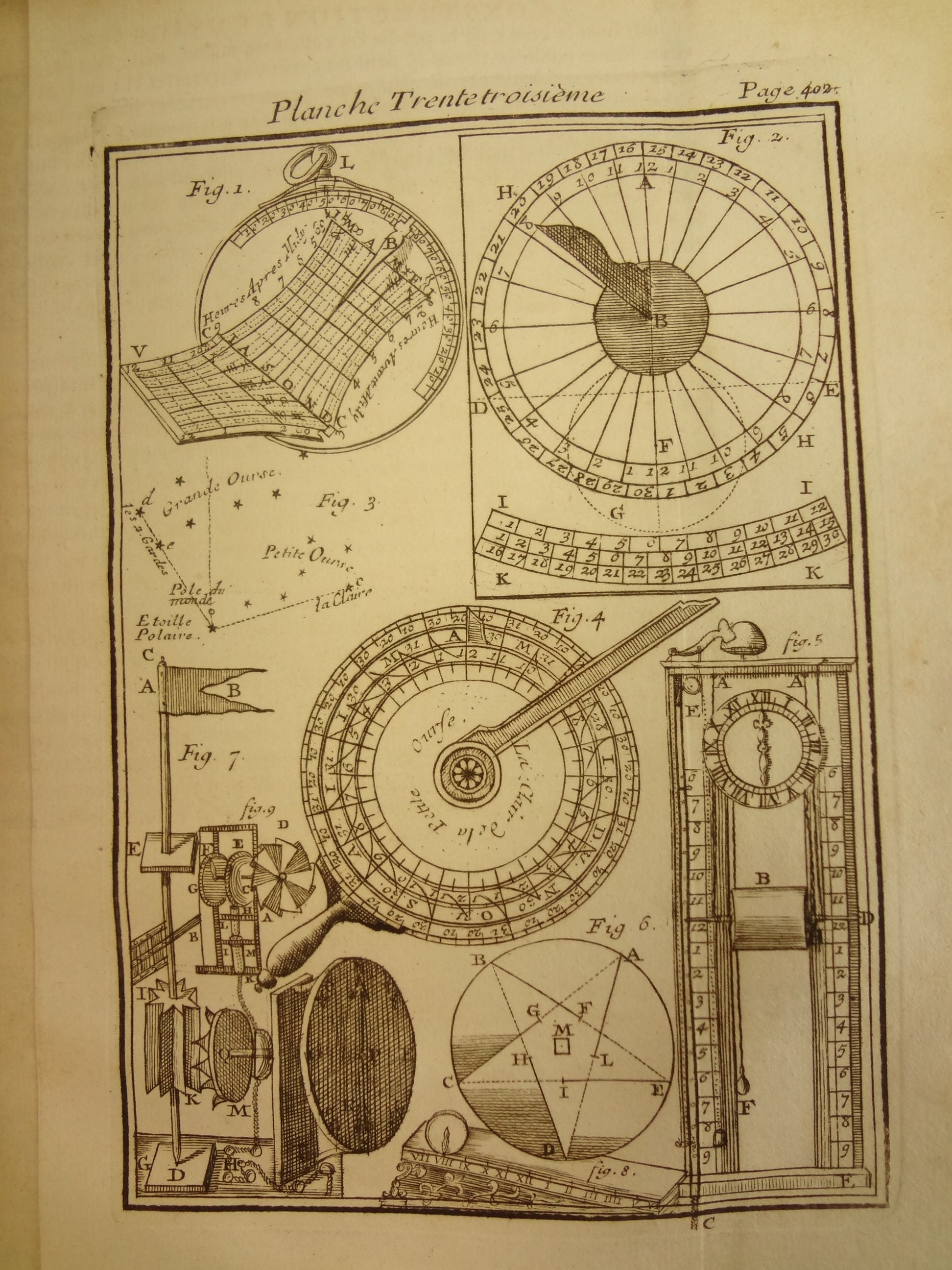 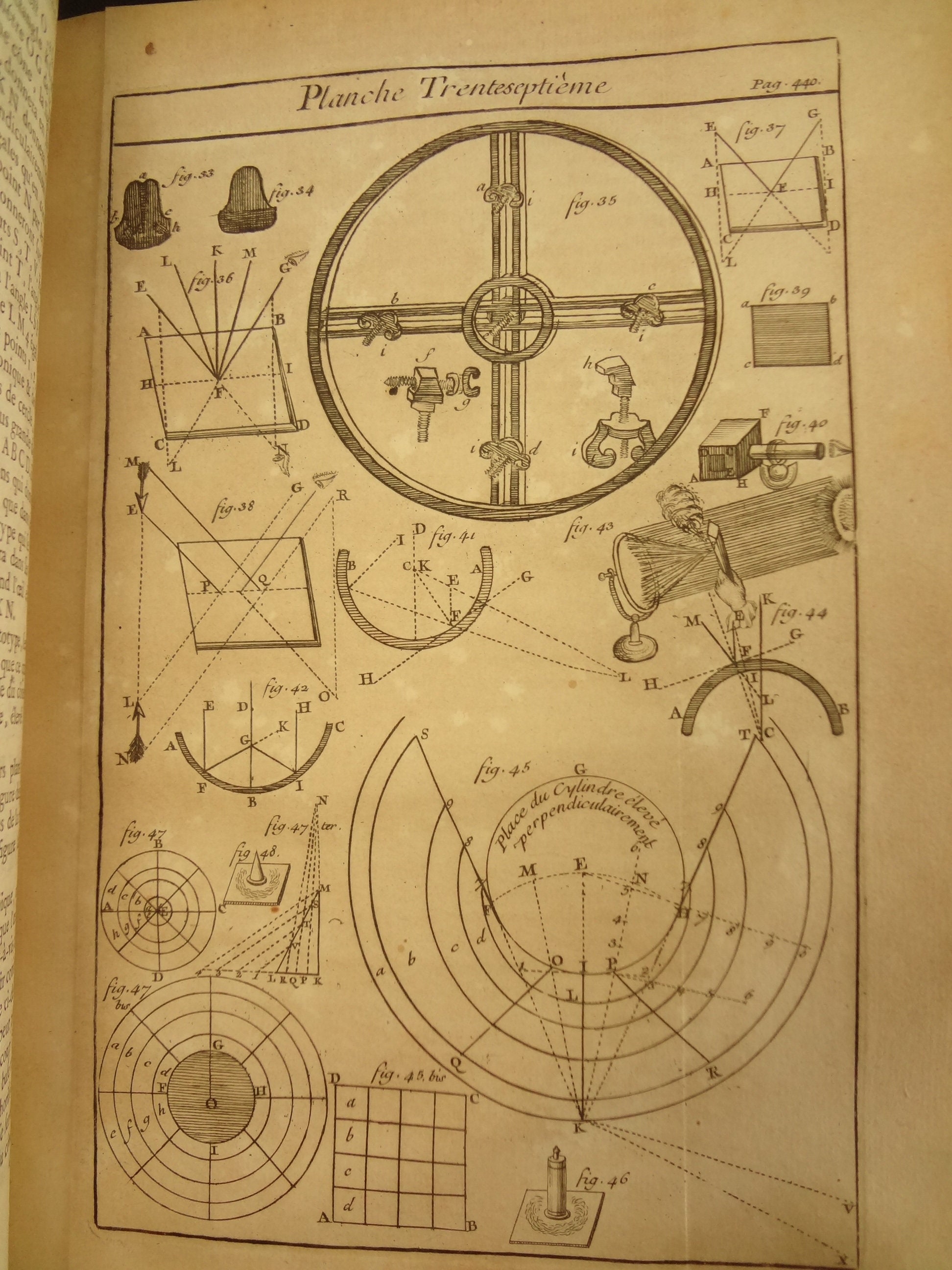 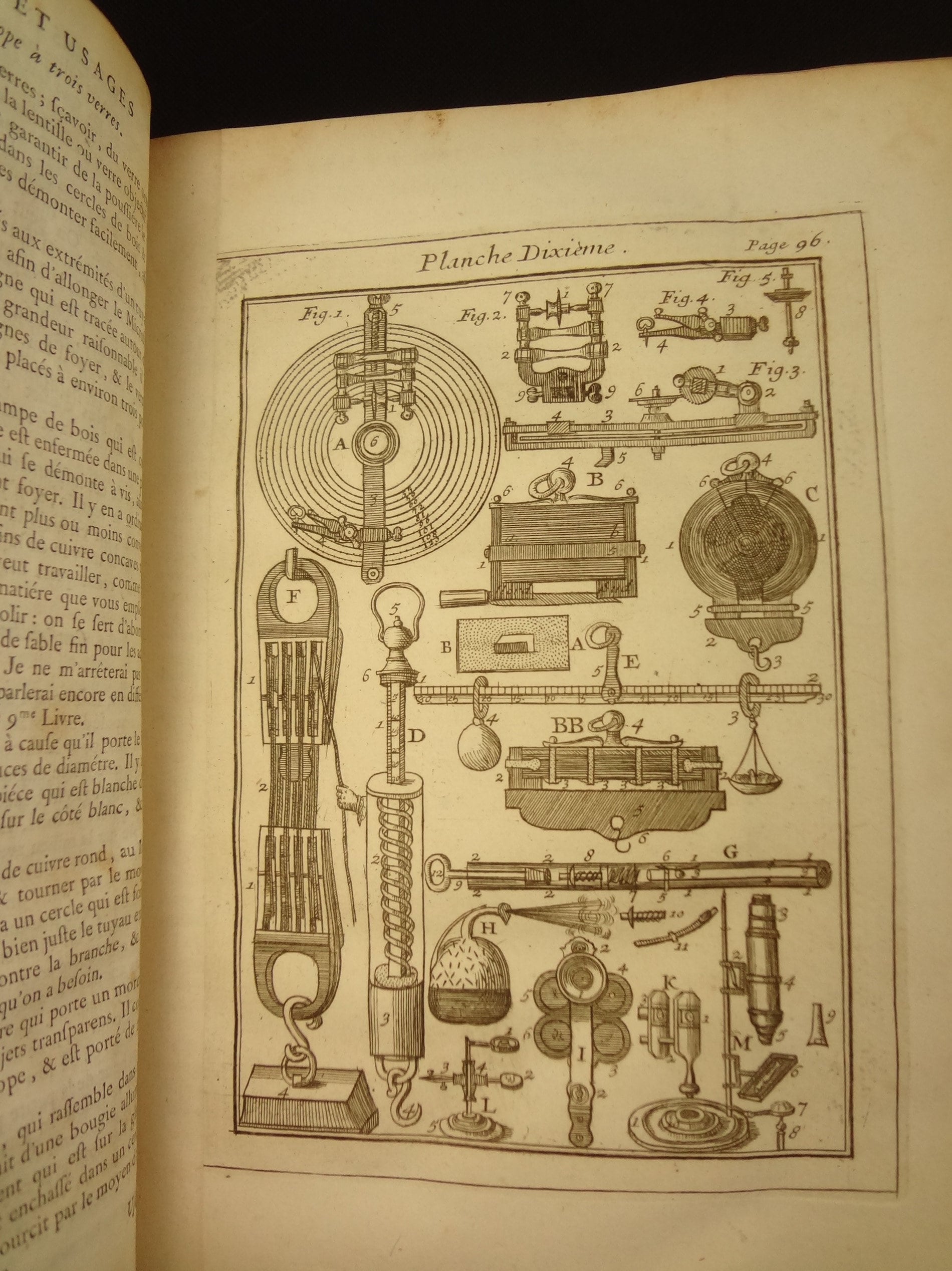 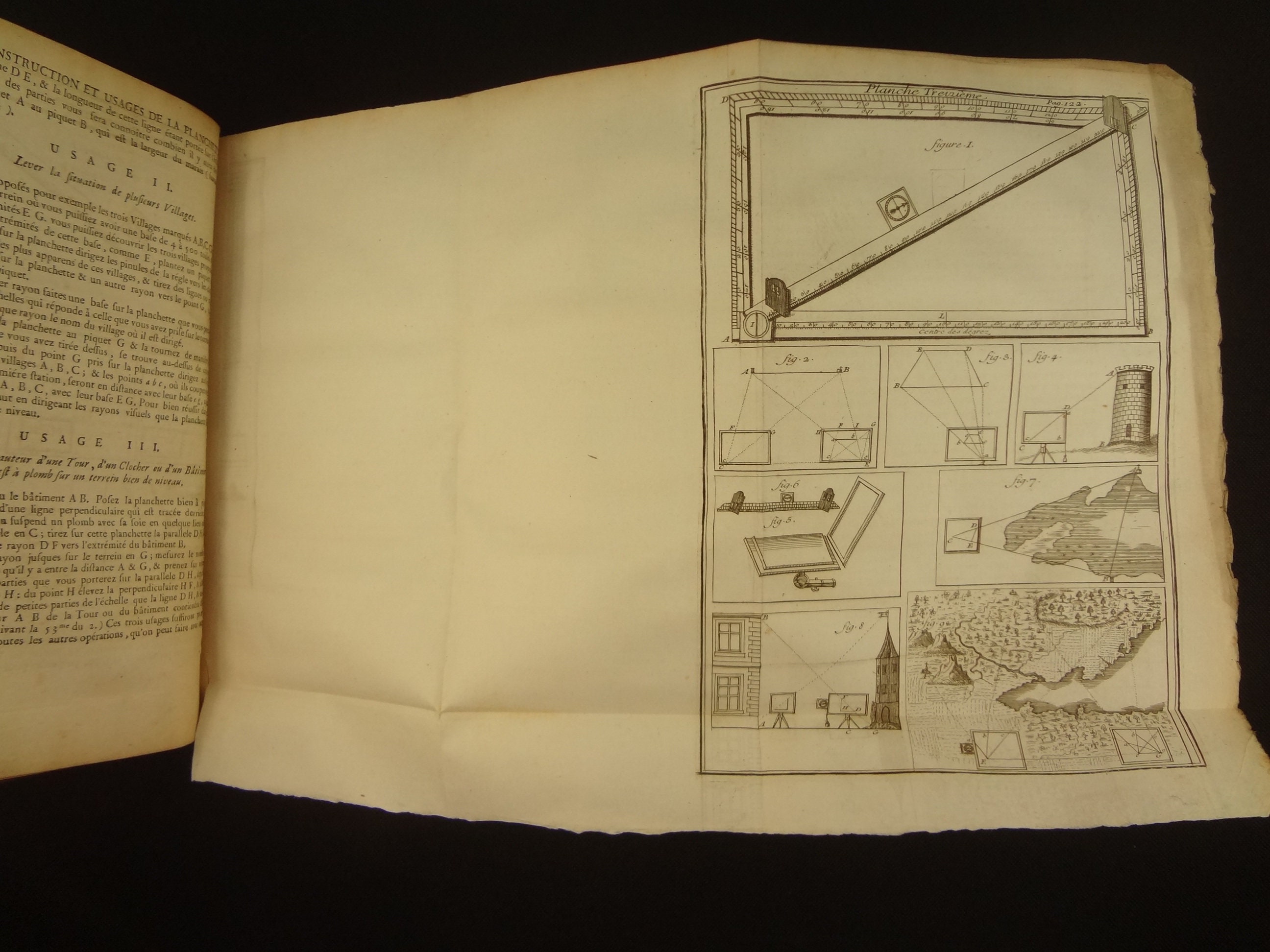 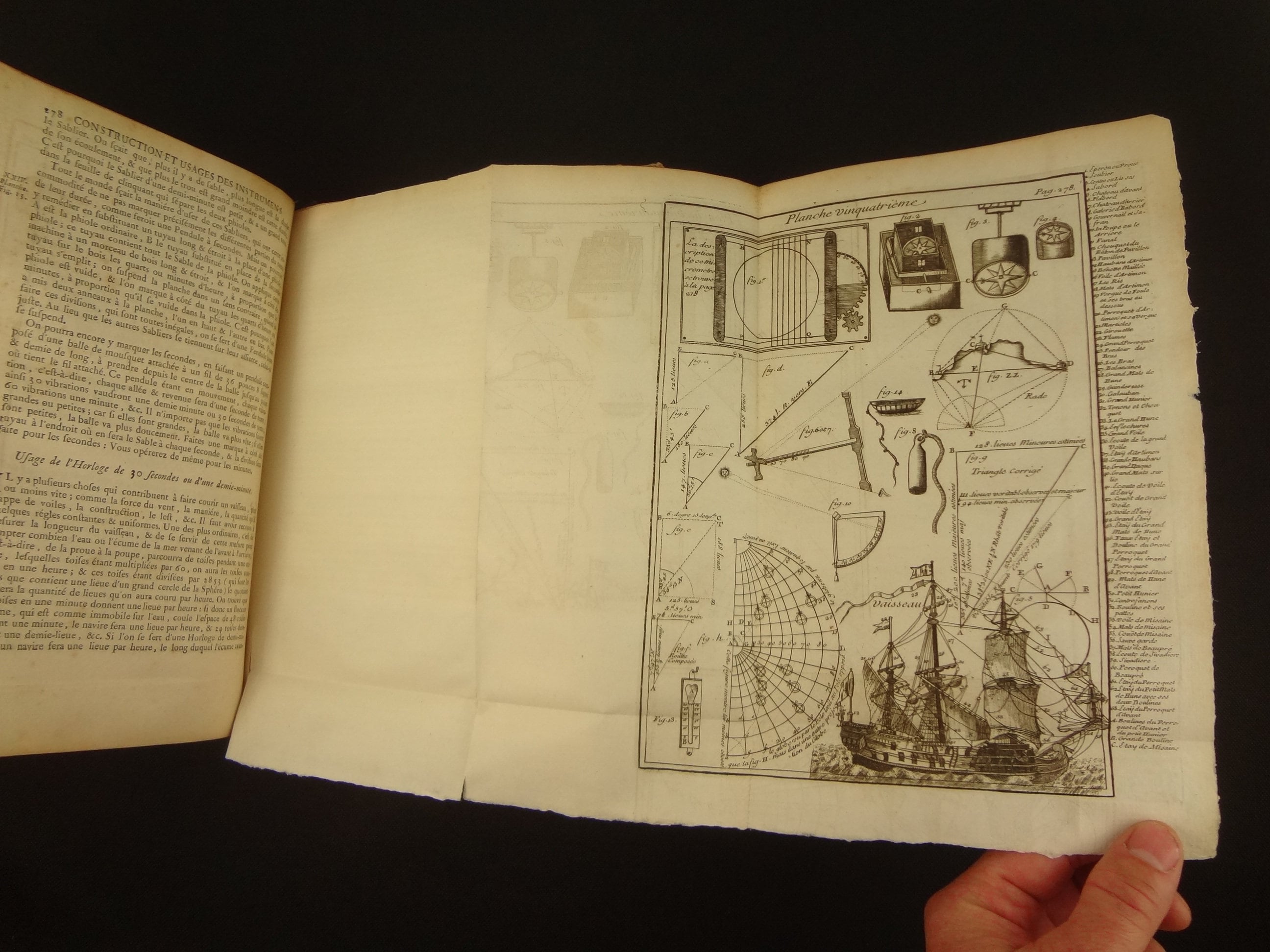 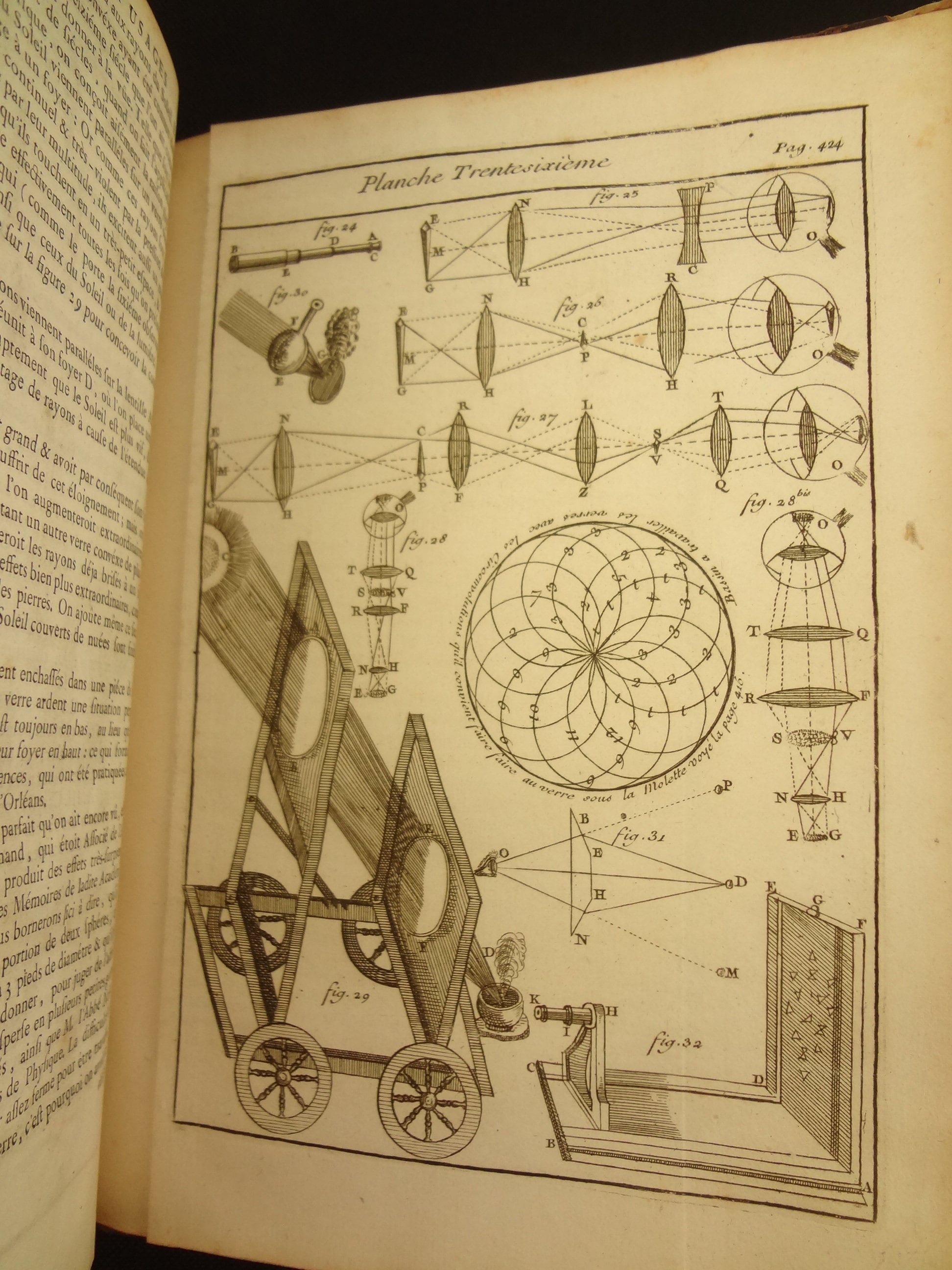 Richly illustrated scientific work from The Enlightenment, filled with thirty-seven fold-out plates illustrating the instruments and practical uses of the instruments that are based on mathematics. From clocks, to land surveying, through castle building, this work touches on a wide range of instrument based work in the 18th century (and today, still). This is a well-regarded work, and this fourth edition was expanded with additional information not contained in the previous editions.

“Nicholas Bion was the king’s engineer for mathematical instruments. It is surprising how little is known about his life beyond the fact his workshops were in Paris. His name is very well known, but it is difficult to determine if his fame rests on the quality of his instruments or on this respected work. Only a few of his original instruments appear to have survived.”

“The work is encyclopedic and gives descriptions of the mathematical instruments commonly available at the beginning of the eighteenth century. Bion interpreted mathematical broadly, for the work contains information on devices used in a variety of scientific and engineering fields. It is composed of a preface giving definitions of mathematical terms, followed by eight separate books:

3. the compass (including both proportional compass and beam compass)

7. navigational instruments, including, for example, the Jacob’s staff and the mariner’s quadrant, which were, by then, no longer in use

8. sundials of all forms at all orientations, the nocturnal and a water clock”

About the Fourth Edition -

“This fourth edition was published after Bion’s death in 1733, the printing being supervised by his son. It uses the same frontispiece as the second edition (1716) but also includes an idealized engraved portrait of Bion—done posthumously (c. 1740) by De Larmessin, the King’s engraver. The content of the second edition has been further augmented with an additional chapter to Book 6 on octants and other astronomical instruments; two very small additions to Book 7 (dignified by being given their own chapter); and a completely new Book 9, which describes a miscellaneous collection of devices from water pumps to burning glasses.” - Tomash Catalog

A frontis, a portrait, and thirty-seven fold-out plates.

Toning, occasional foxing, and thumbing throughout.

Pencil notes on back of flyleaf, and some smudges. Small ink smudge on page 9. On the second plate someone drew a corresponding shape in the right margin. Plate 13 had a deeply toned fore-edge. Plate 25 is proud (extending past text block) and chipped, darkened at fore-edge. Plate 34 is placed at page 420, not 410, as called for.