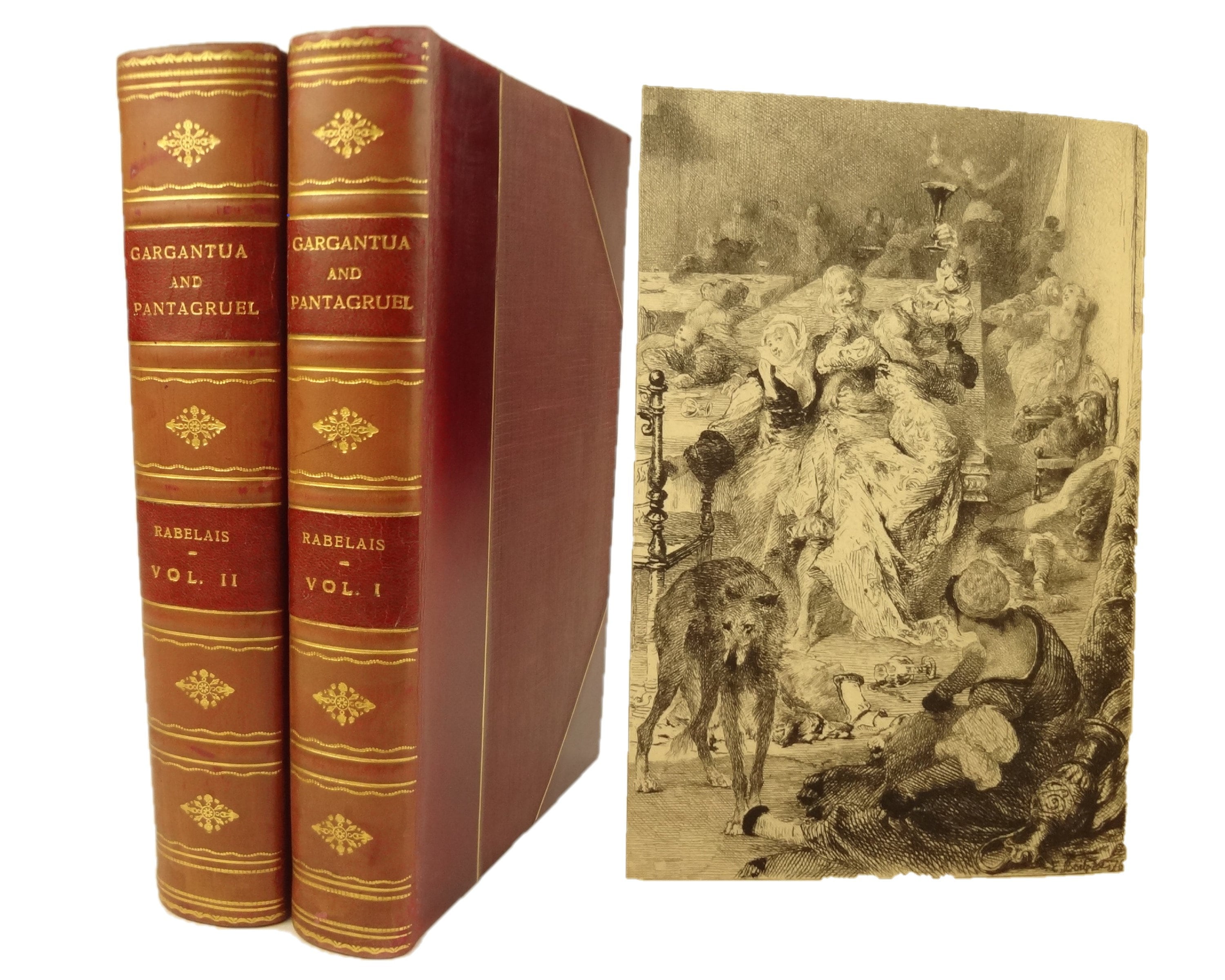 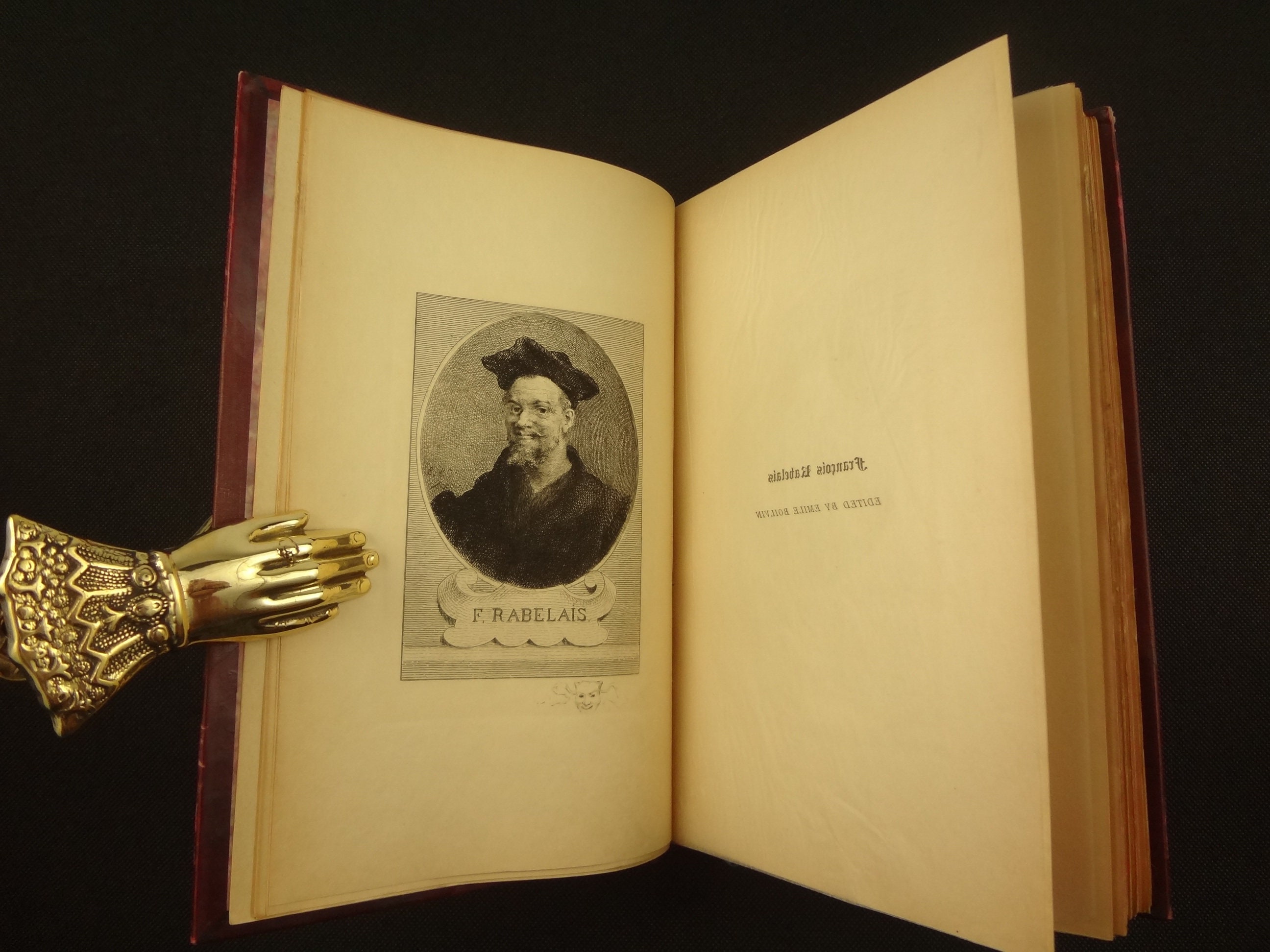 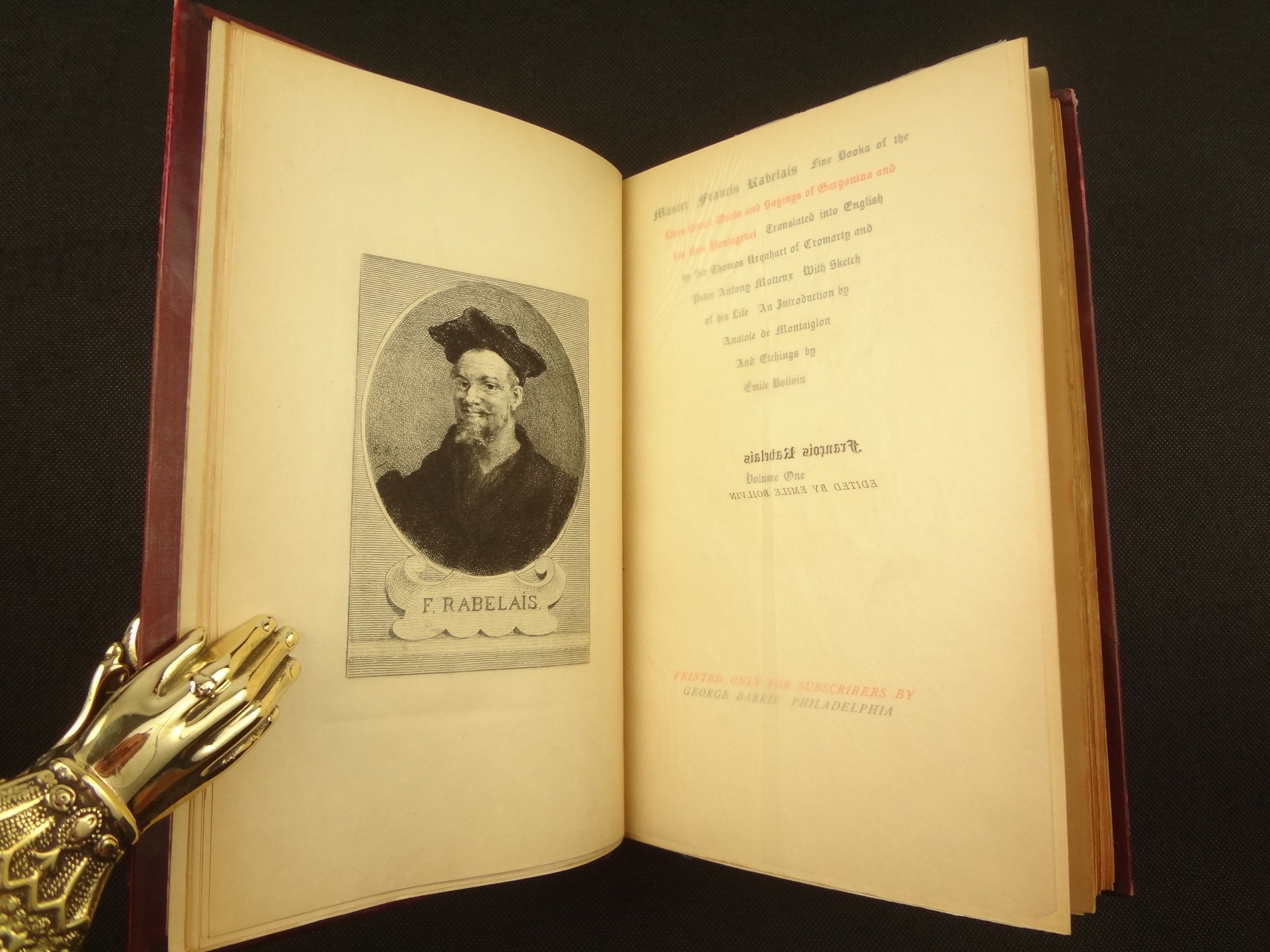 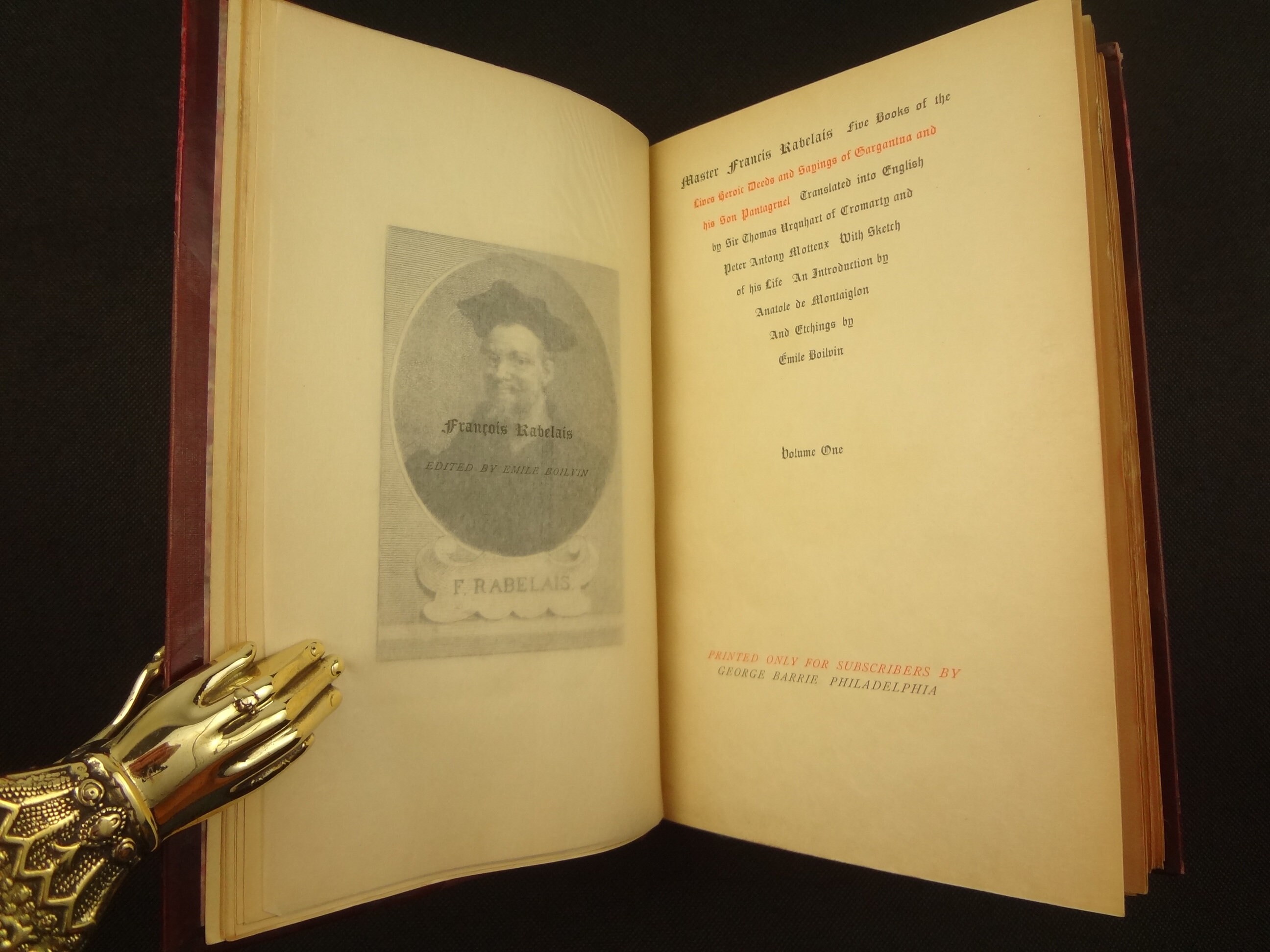 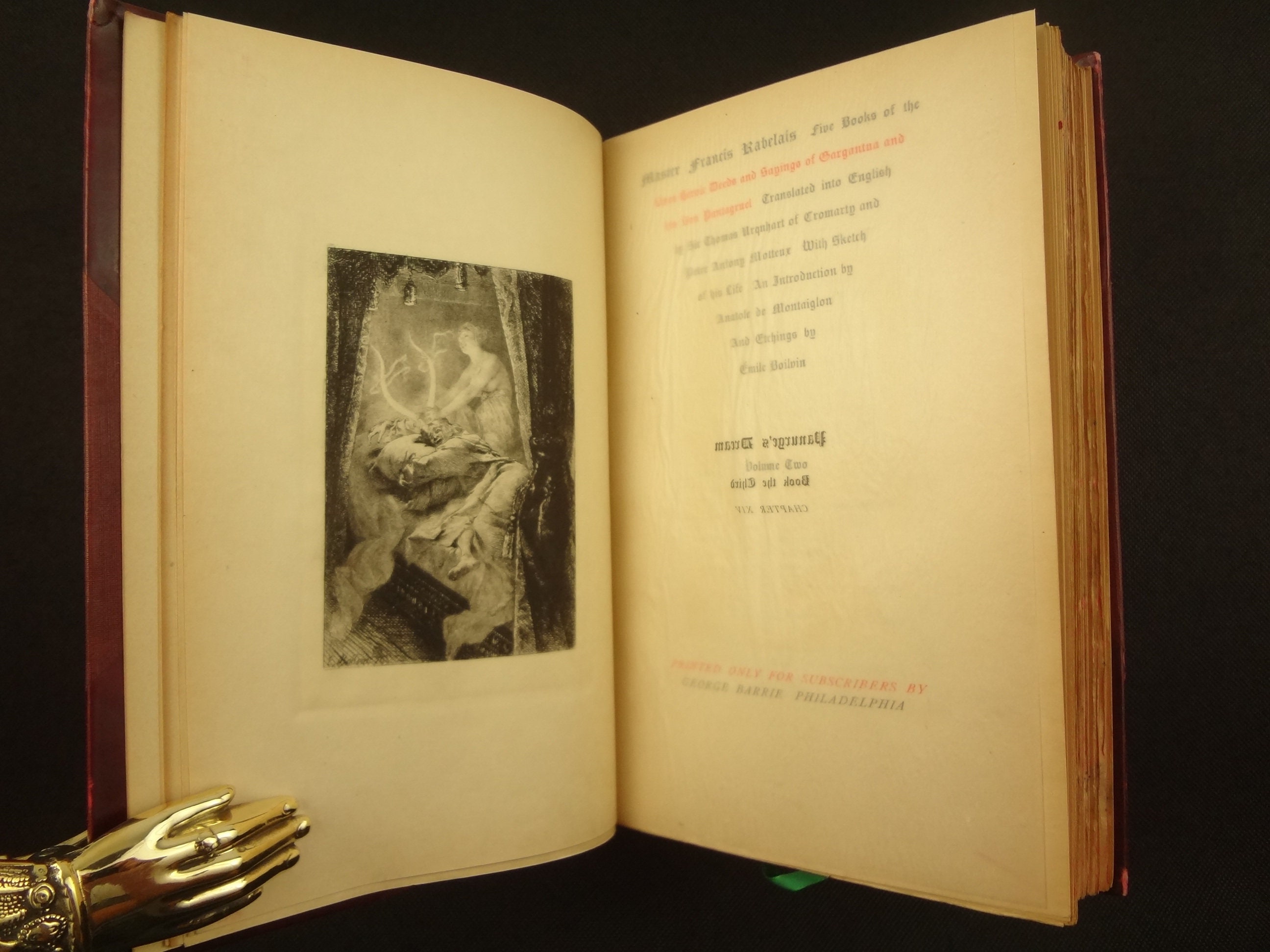 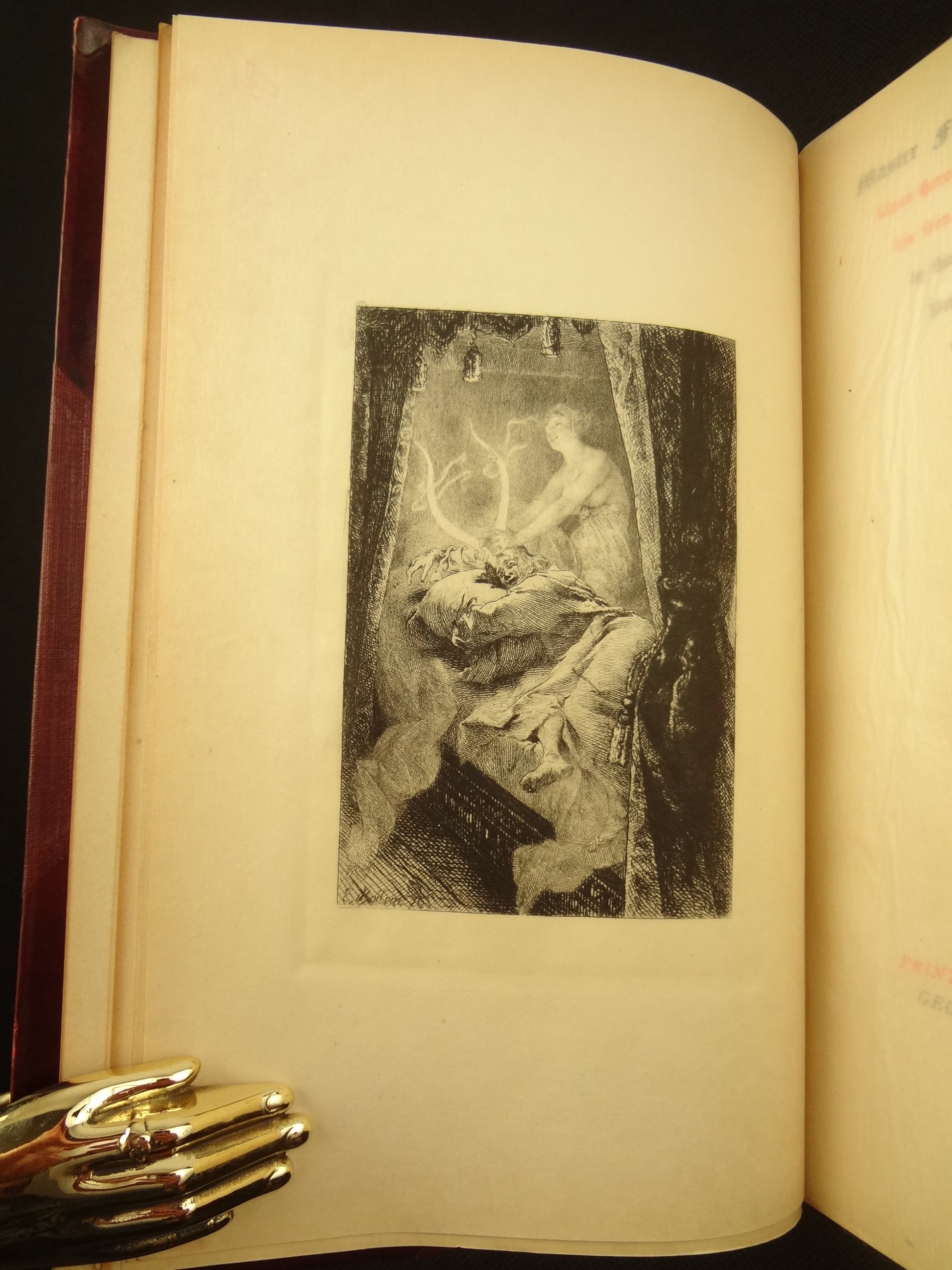 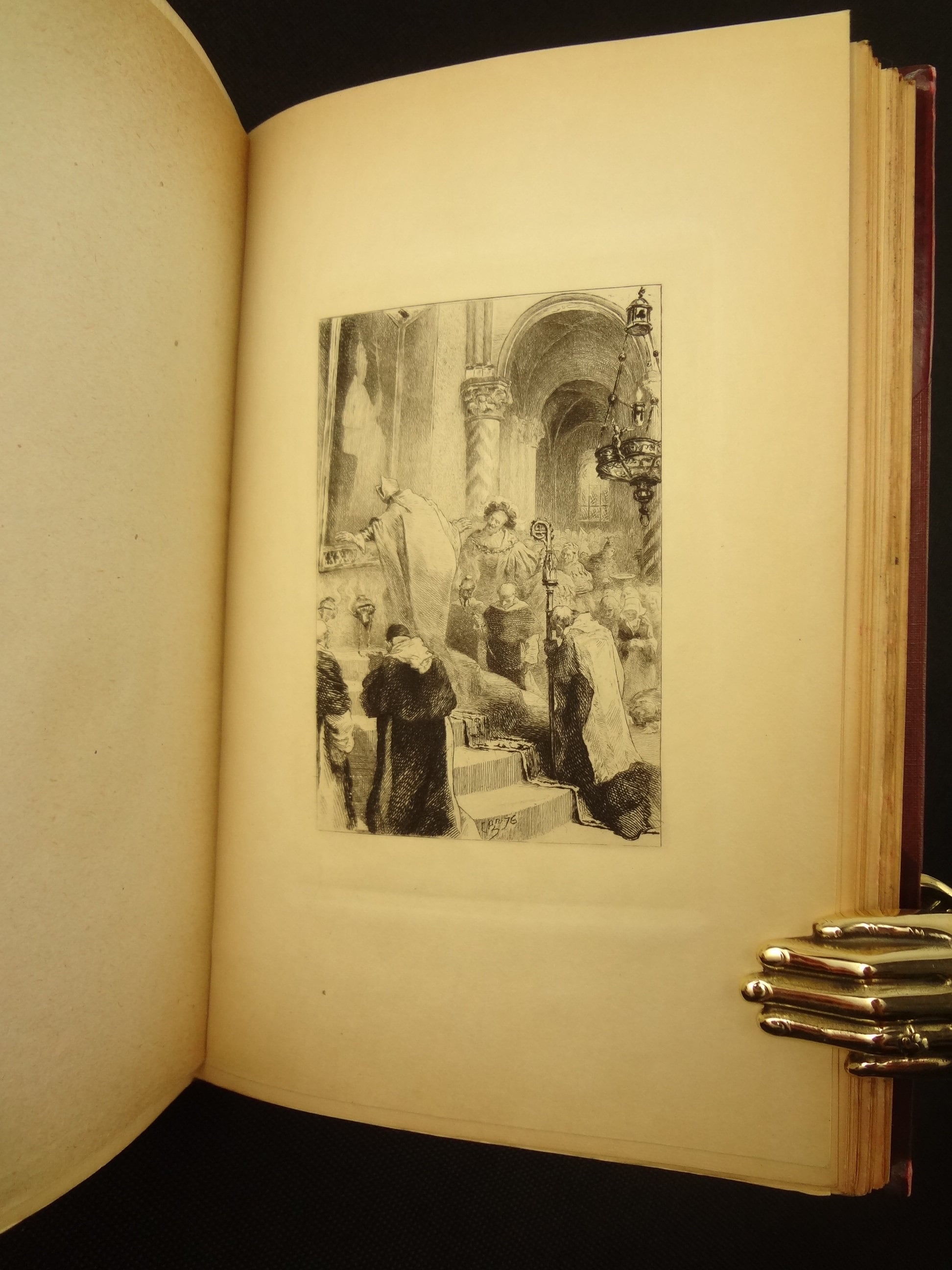 A handsome edition of Rabelais' classic work, printed on Japanese paper, with two states of each of the eleven etchings (after the first illustrated edition's illustrations) by Emile Boilvin. No copyright date, but likely printed circa 1900; printed by George Barrie in Philadelphia "for subscribers".

The Life of Gargantua and of Pantagruel is a pentalogy of novels written in the 16th century by François Rabelais, which tells of the adventures of two giants, Gargantua and his son Pantagruel. The text is written in an amusing, extravagant, and satirical vein, and features much crudity, scatological humor, and violence (lists of explicit or vulgar insults fill several chapters).

The censors of the Collège de la Sorbonne stigmatized it as obscene, and in a social climate of increasing religious oppression in a lead up to the French Wars of Religion, it was treated with suspicion, and contemporaries avoided mentioning it. According to Rabelais, the philosophy of his giant Pantagruel, "Pantagruelism", is rooted in "a certain gaiety of mind pickled in the scorn of fortuitous things".

Rabelais had studied Ancient Greek and he applied it in inventing hundreds of new words in the text, some of which became part of the French language. Wordplay and risqué humor abound in his writing.

François Rabelais (1483-1553) was a French Renaissance writer, physician, Renaissance humanist, monk and Greek scholar. He has historically been regarded as a writer of fantasy, satire, the grotesque, bawdy jokes and songs. His best-known work is Gargantua and Pantagruel. Because of his literary power and historical importance, Western literary critics consider him one of the great writers of world literature and among the creators of modern European writing. His literary legacy is such that today, the word Rabelaisian has been coined as a descriptive inspired by his work and life. Merriam-Webster defines the word as describing someone or something that is "marked by gross robust humor, extravagance of caricature, or bold naturalism."

See pictures. Volume one is slightly out of square. Sunning to spines. A little edge and corner wear to bindings. A little chipping at edge of V2 label on spine. A little toning to pages. Volume one has "6023, 2vols" written on blank endpaper with price and initial erased. Mostly very clean inside.