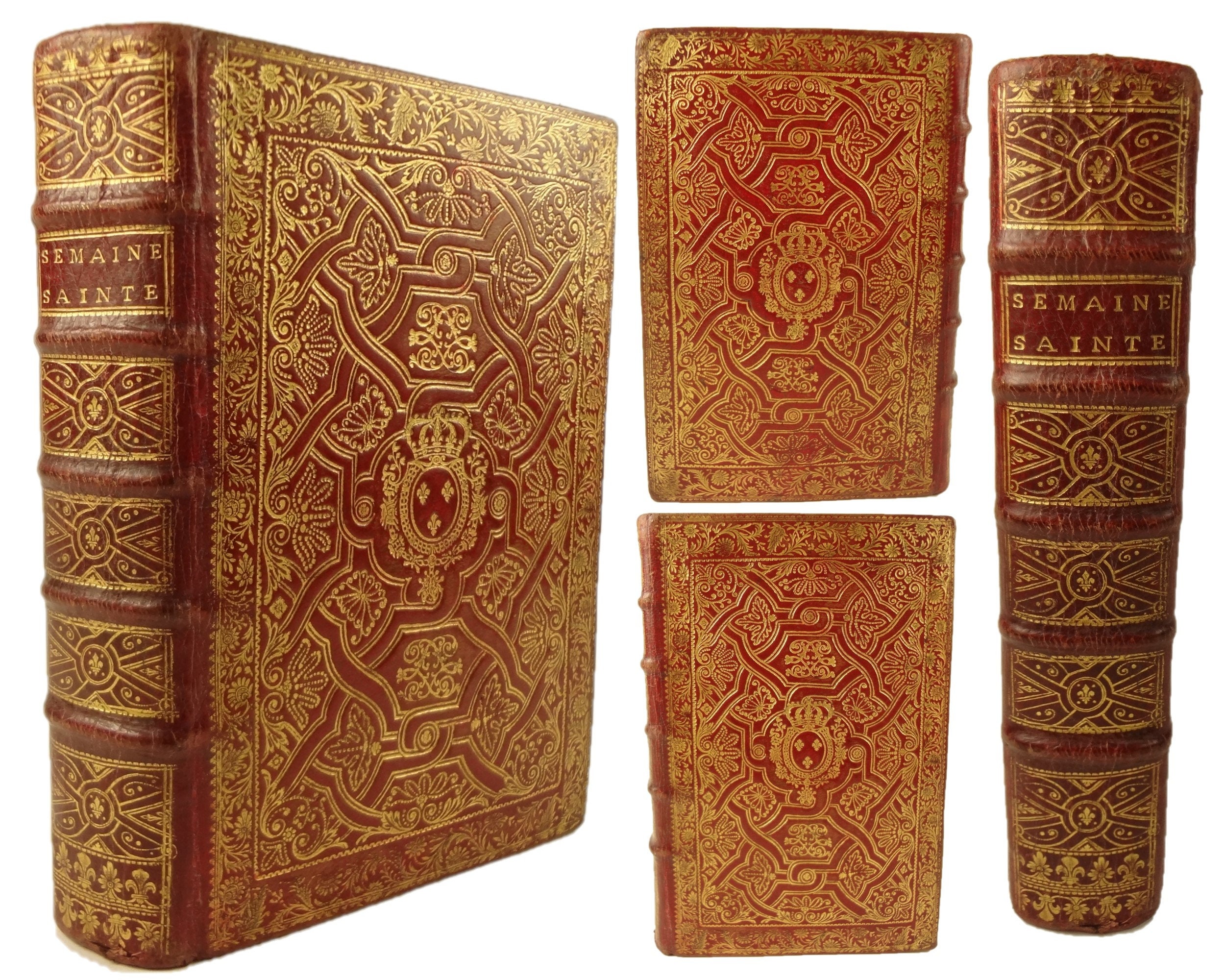 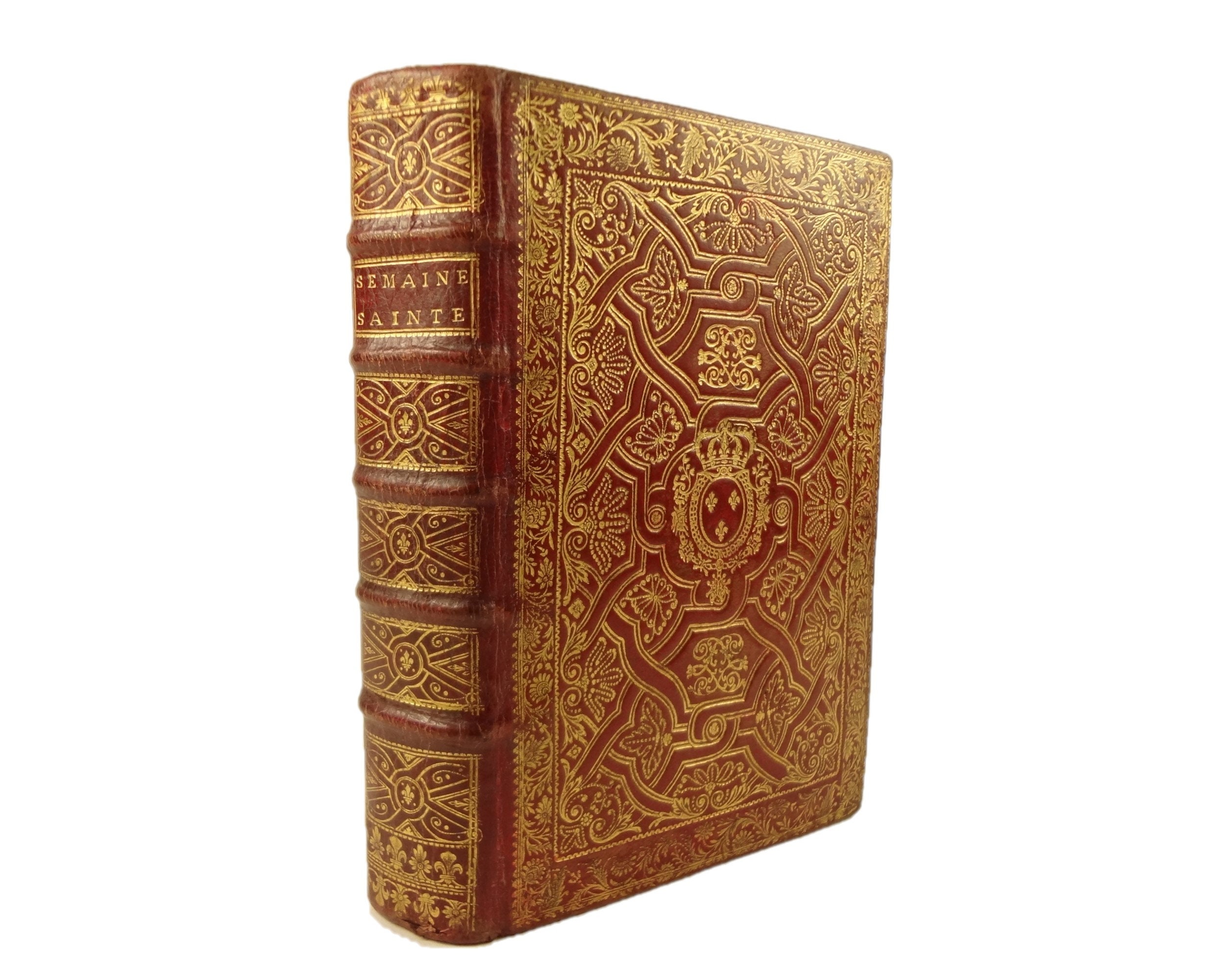 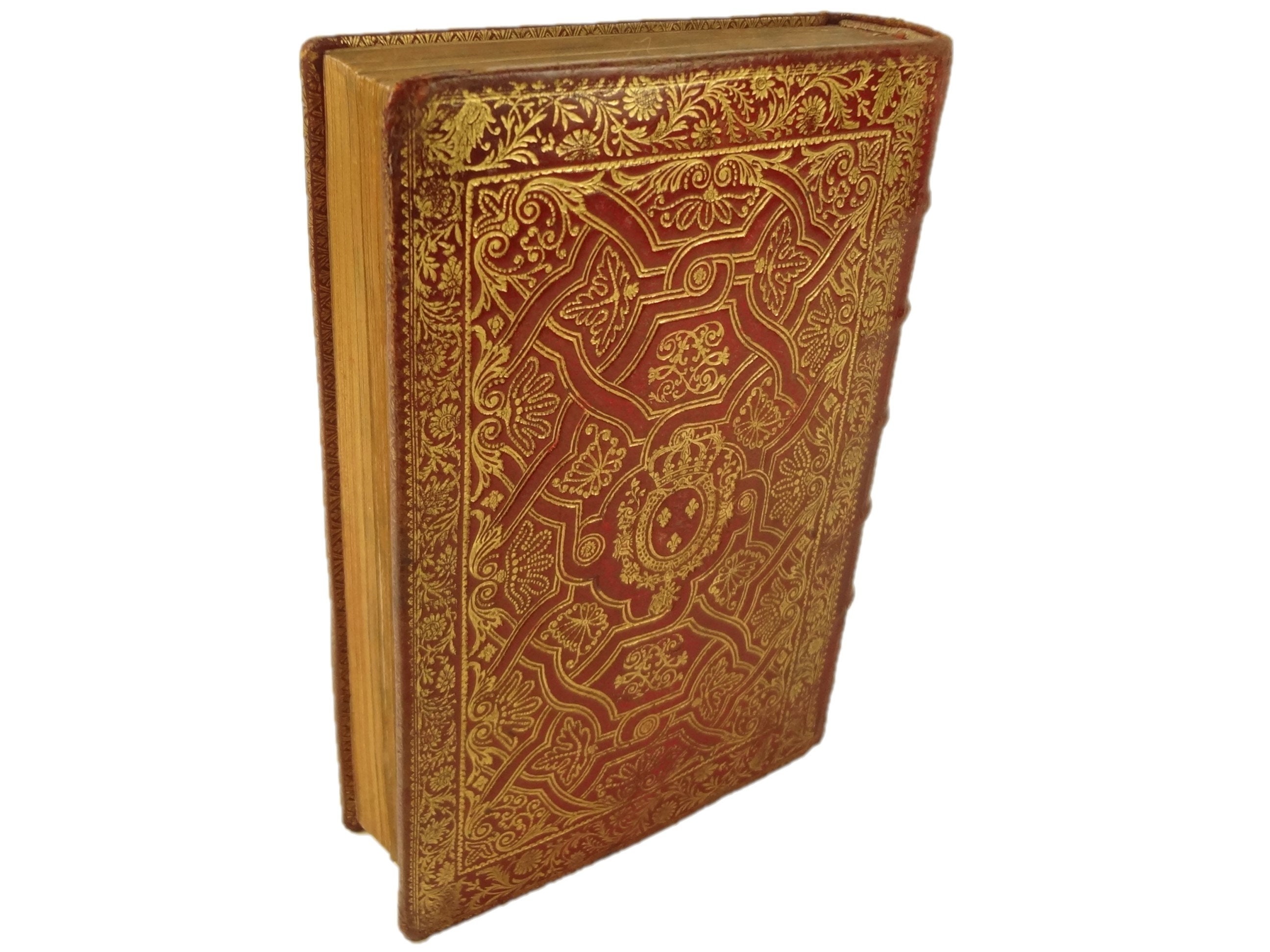 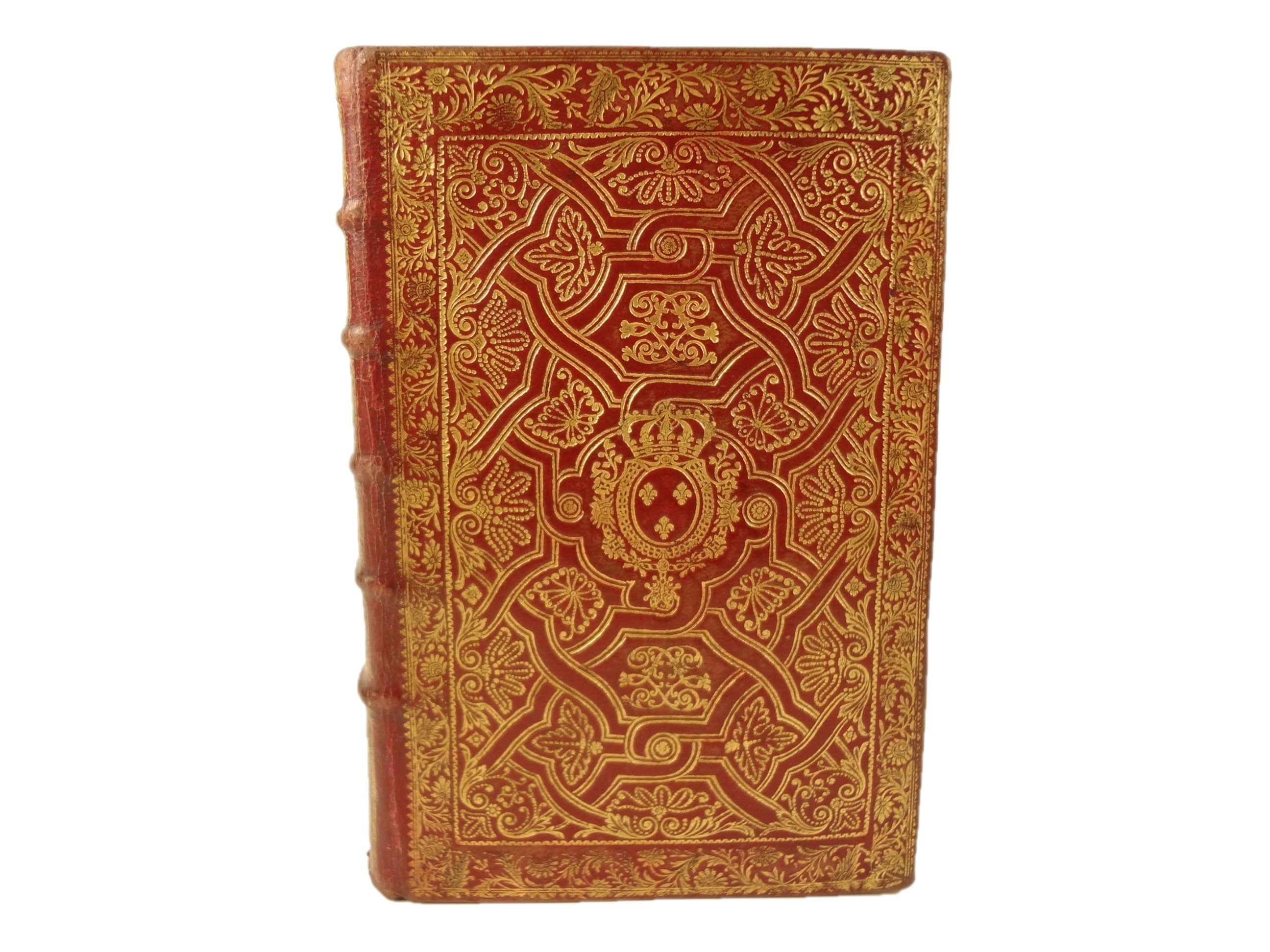 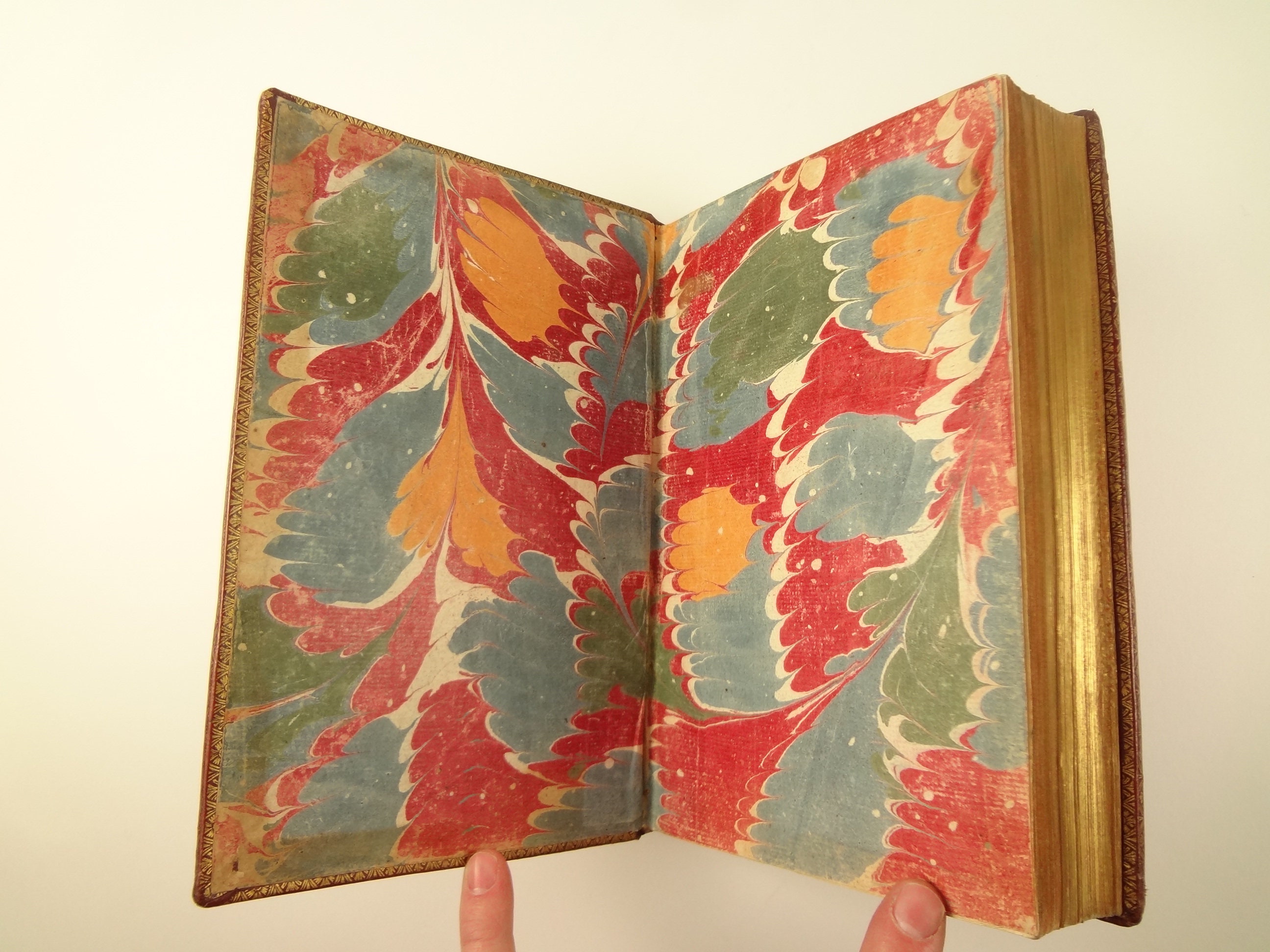 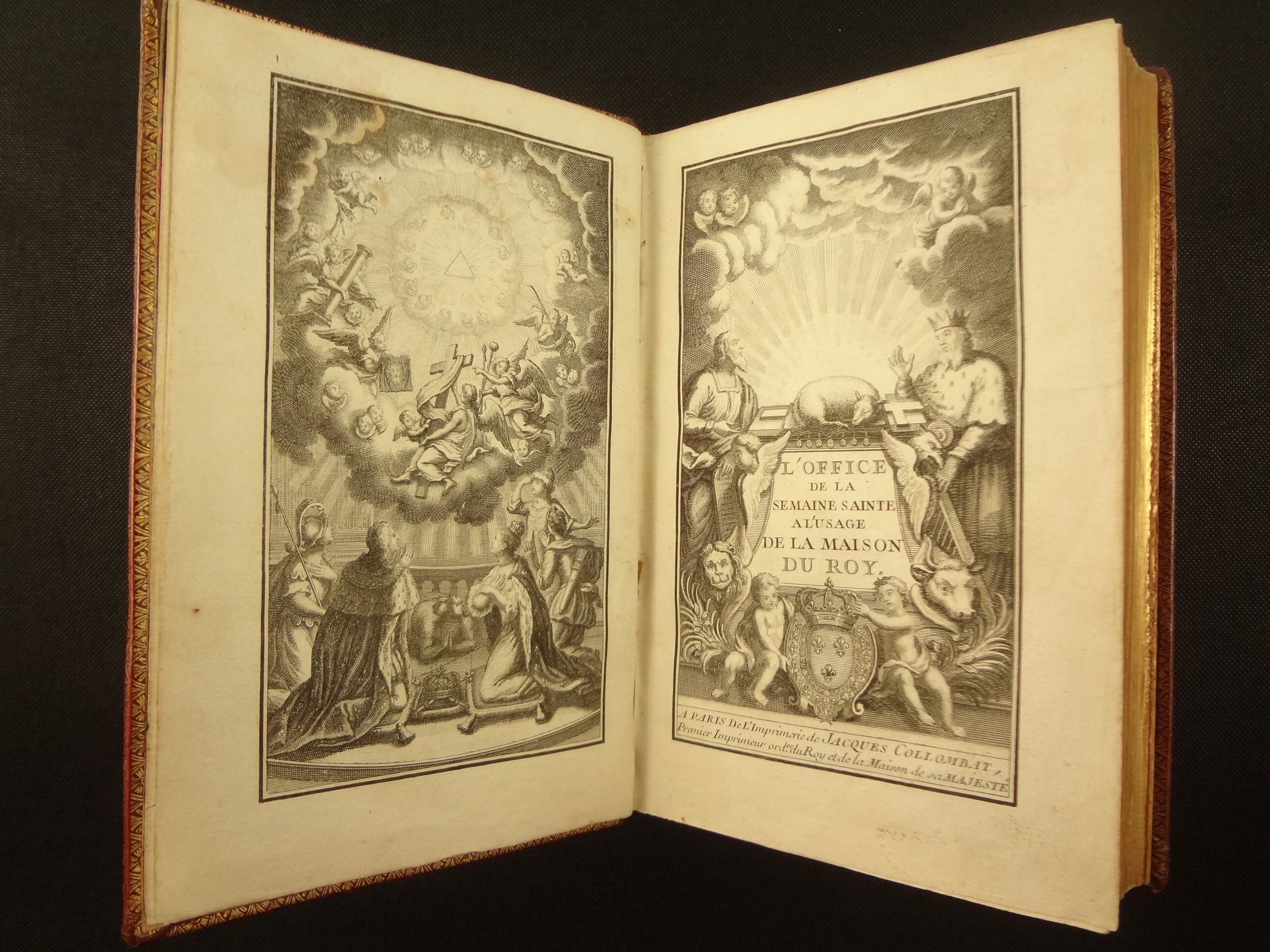 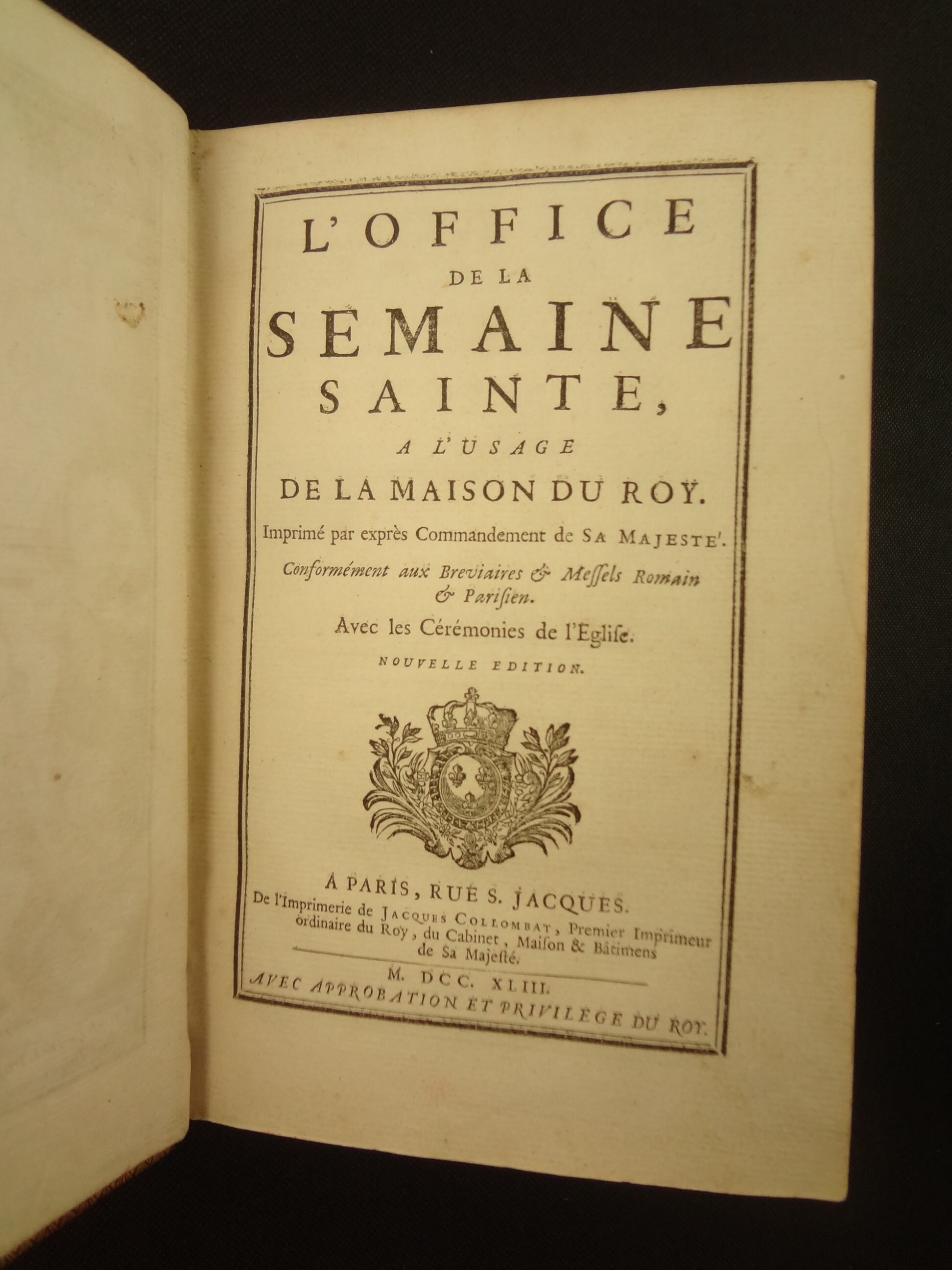 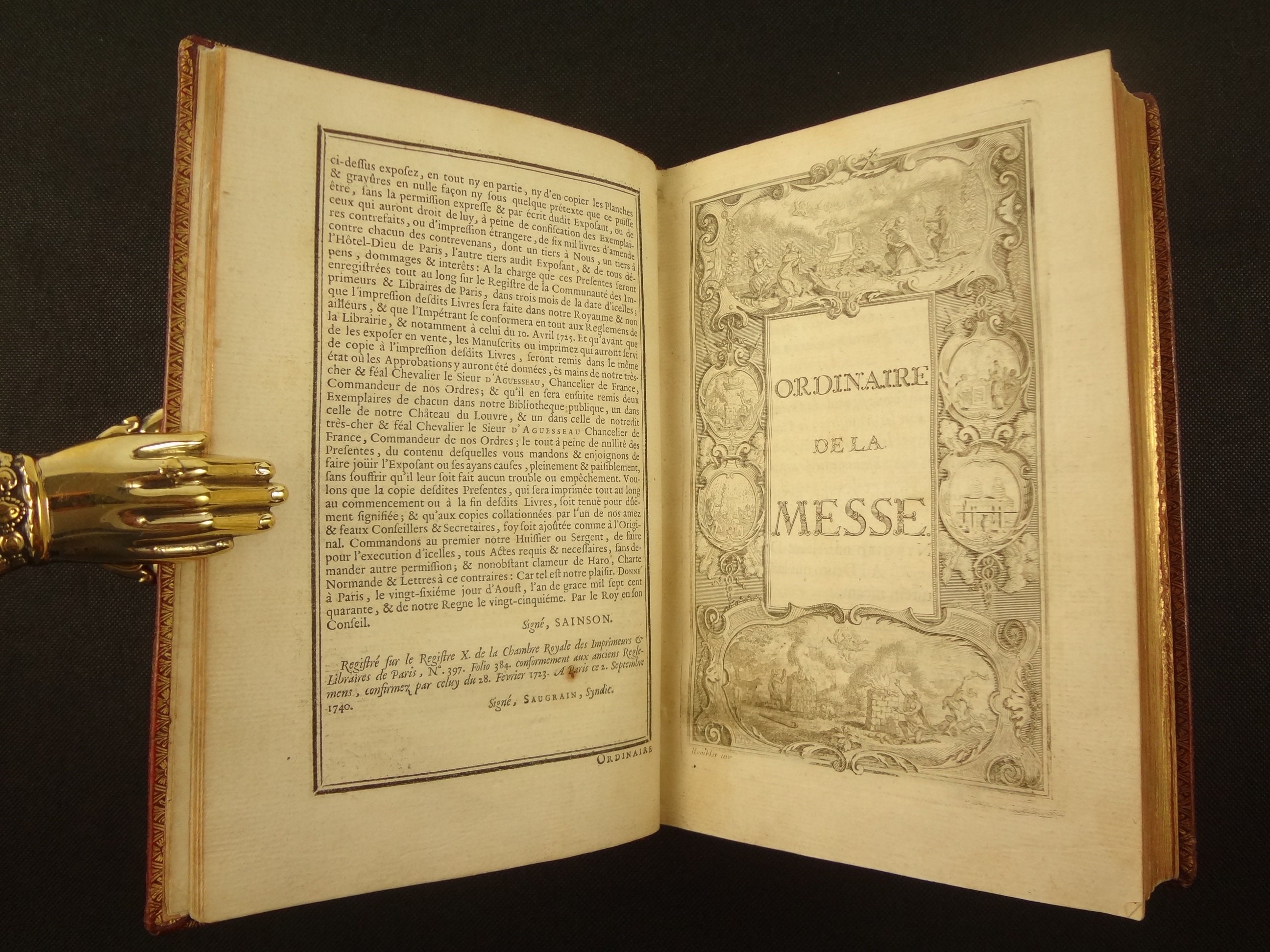 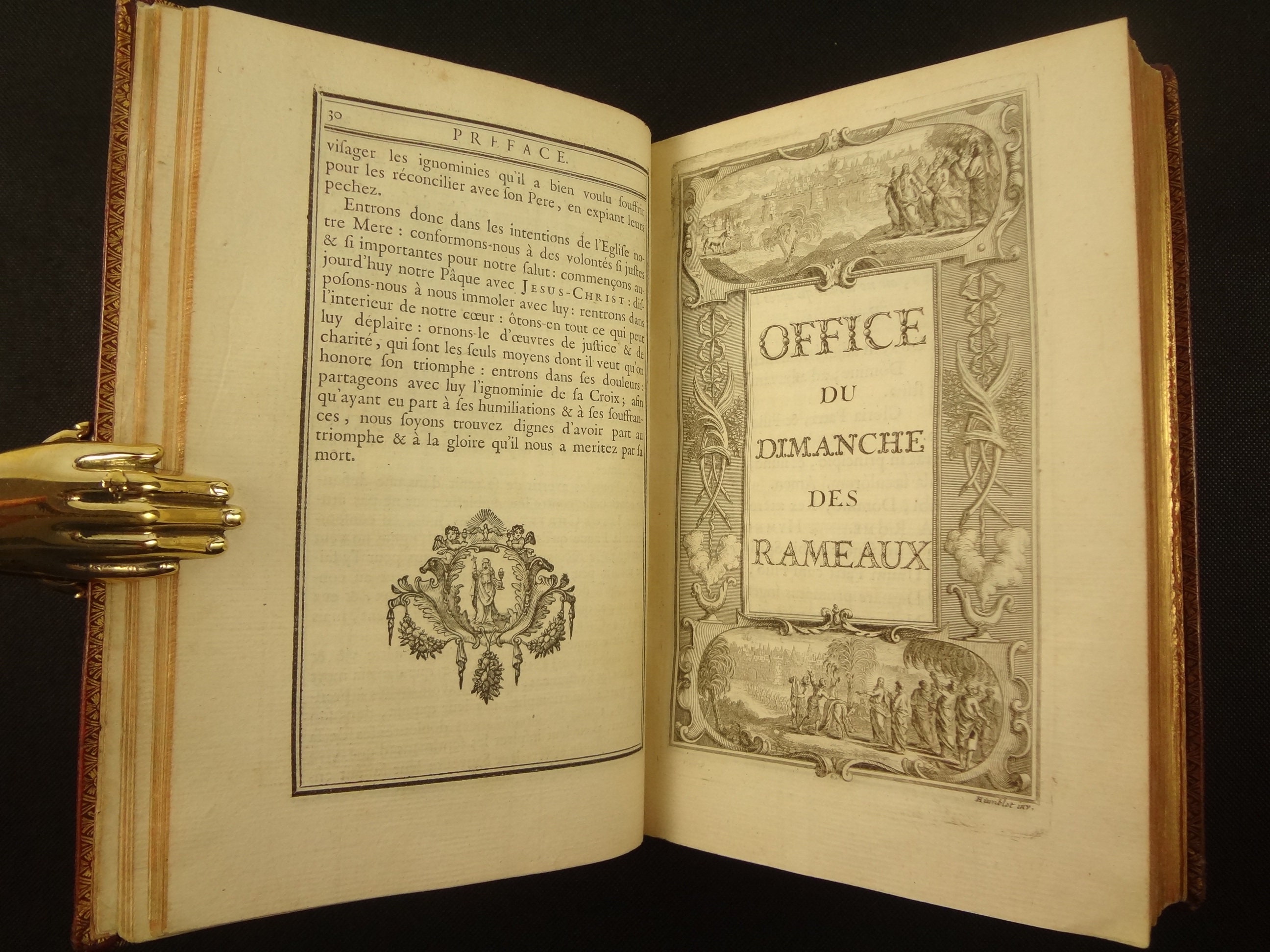 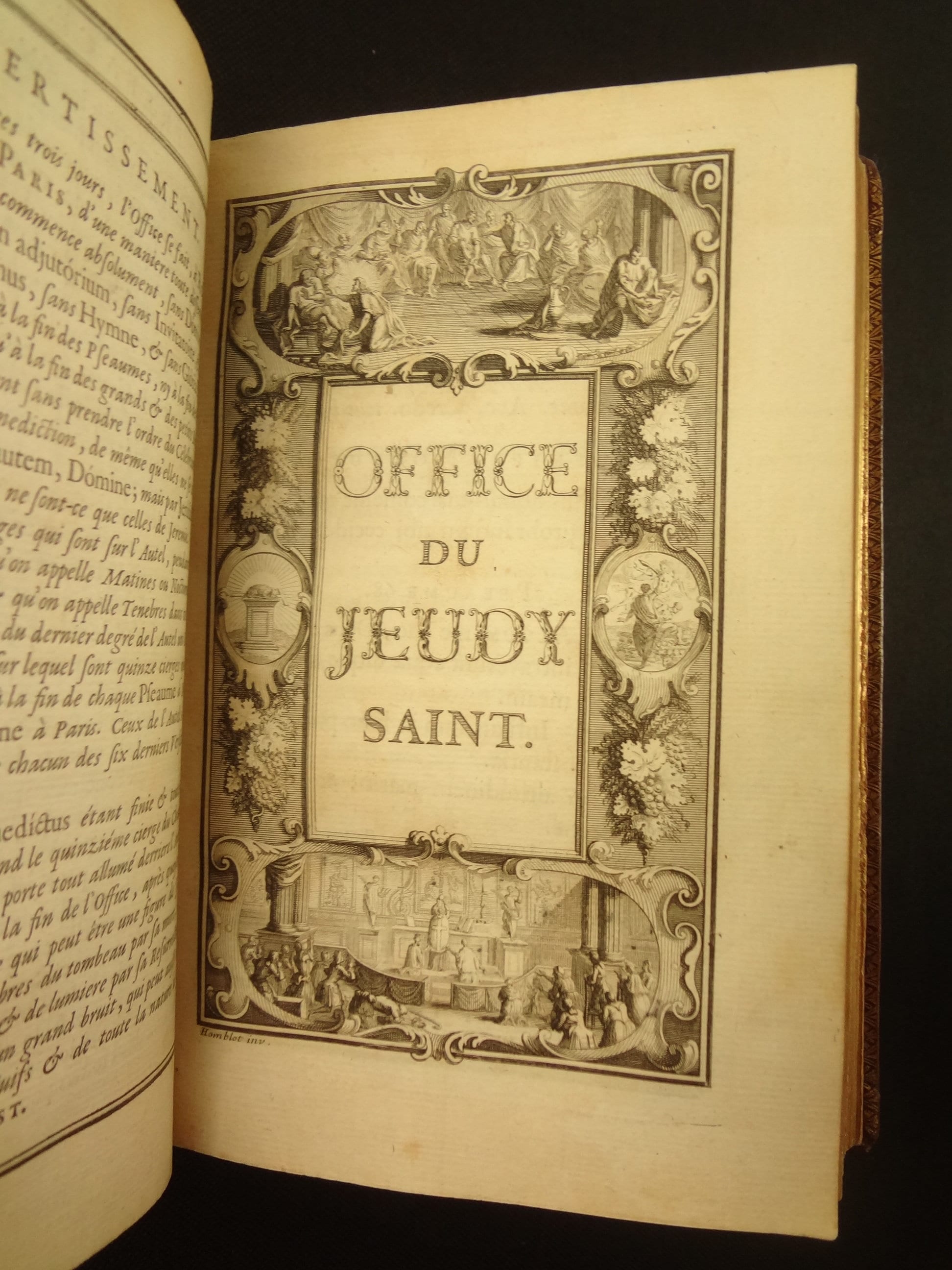 Beautiful gilt tooling, with the central arms of King Louis XV, and his monogram, decorate this 1743 L'Office de la Semaine Saint, a l'usage de la Maison du Roy (for the use of the King's household), printed by Jacques Collombat, printer to the King.

This delightful prayer book is a devotional for Holy Week, and was immensely popular in France during the 18th century. This is a particularly fine example, with a beautiful royal binding, illustrations by the French artist Antoine Humblot (six, full-page), and on handsome laid paper (likely made in Holland, but difficult to read watermark in last blank leaf).

The gilt tooling design decorating this binding is well-known and well-regarded; it mimics the fanfare bindings of the 17th century, although likely produced using a stamp, rather than individual hand tools, producing bright and deep tooling which remains lovely almost three hundred years later. It is possible that the binding was produced in the workshop of the royal binder, Dubuisson (See L.A. Miller's (Cyclopaedia) article on the Collombat bindings).

Yves Devaux, in his work on bindings (Dix Siecles de Reliure) writes that these 18th century fanfare bindings are an example of "pastiche", which celebrates the work they imitate.

Regarding provenance, although largely blotted out, the front blank unpaginated endpaper contains an inscription in which one can partially make out "Ce livre est la (propriete?) de Notre Dame de Charite de (?)".

Measures approx. 21.5 x 14.5 x 4.5 cm, 8vo. Red morocco binding with richly gilt late-fanfare design. Boards in gilt with outer border of double fillet and a roll, outer frame of floral scroll, inner roll frame, and within the central compartments are the monogram of King Louis XV above, and below, the arms of Louis XV, surrounded by fanfare designs, with floral and leafy sprays and flowers in the pointelle style. The spine is with five raised bands, and six compartments; five compartments have a central fleur-de-lis, surrounded by a circle and framed in by gilt borders, fanfare motif and a few leaves, one compartment with the title in gilt, and a fleur-de-lis/flower alternating roll in double at bottom of spine and at top.

Two frontis engravings after Humblot, with one showing the King and Queen in prayer.

Four other full-page engravings as section titles, after Humblot.

See pictures. Light edge and corner wear, more at bottom edge. Light surface crazing of leather near joints and on spine, but surface only, joints remain solid. Wear at top of spine, and 1 cm horizontal crack at foot of spine. Silk tie expired at top endband. A few fore-edges, near the rear, seem to have been trimmed by binder just slightly less than smooth. Some fox/rust spots throughout, light and occasional. Occasional leaf more toned than others. Also, occasional thumb towards front, but mostly quite clean. 1st blank unpaginated leaf has ex libris inscription blotted out, causing stain that did blead through to the verso of the flyleaf. "Louis XV" written in graphite at recto of frontis engraving of King/Queen. 1 cm round (candle-wax?) mark on 286. While I nitpicked, truly a very handsome book.