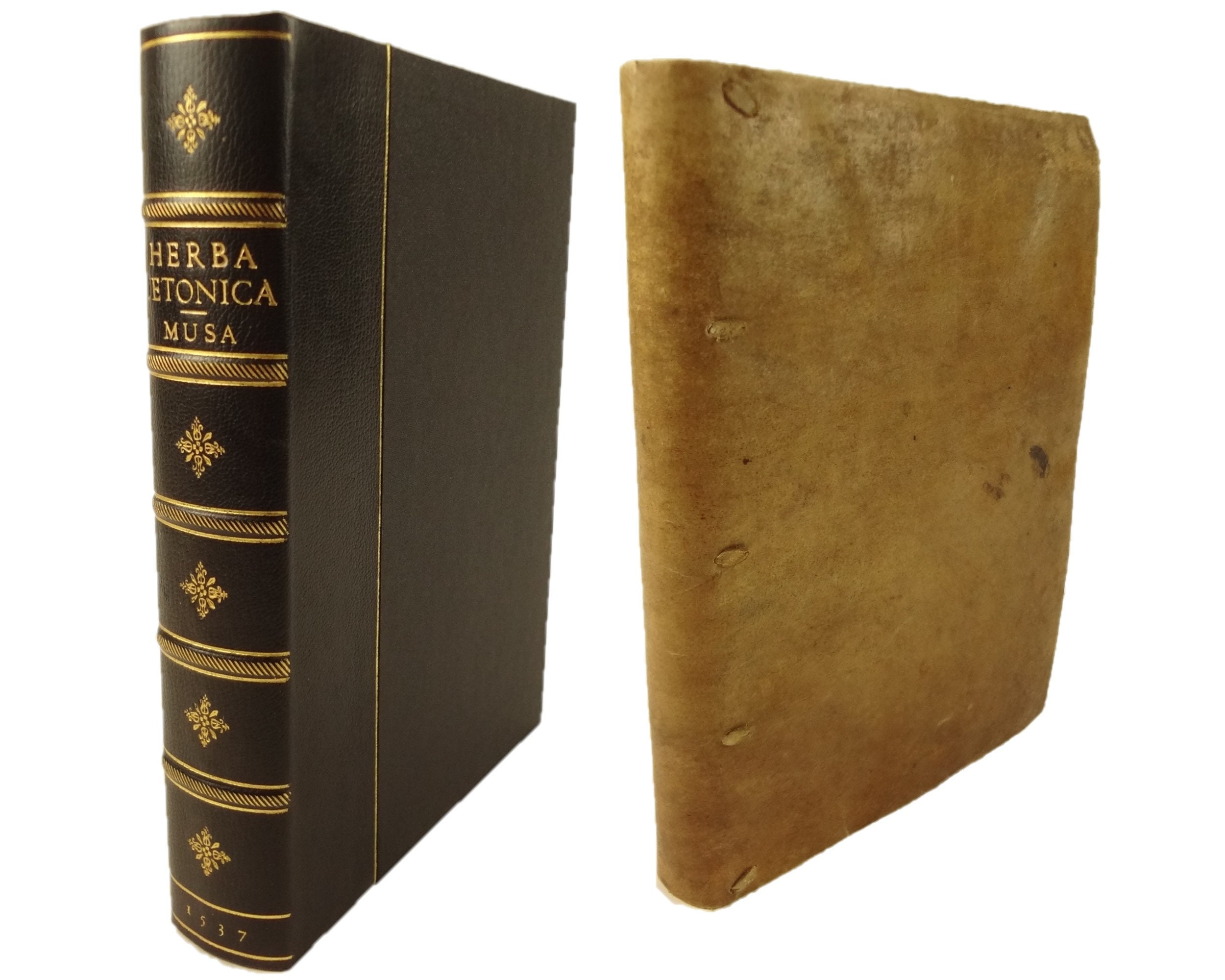 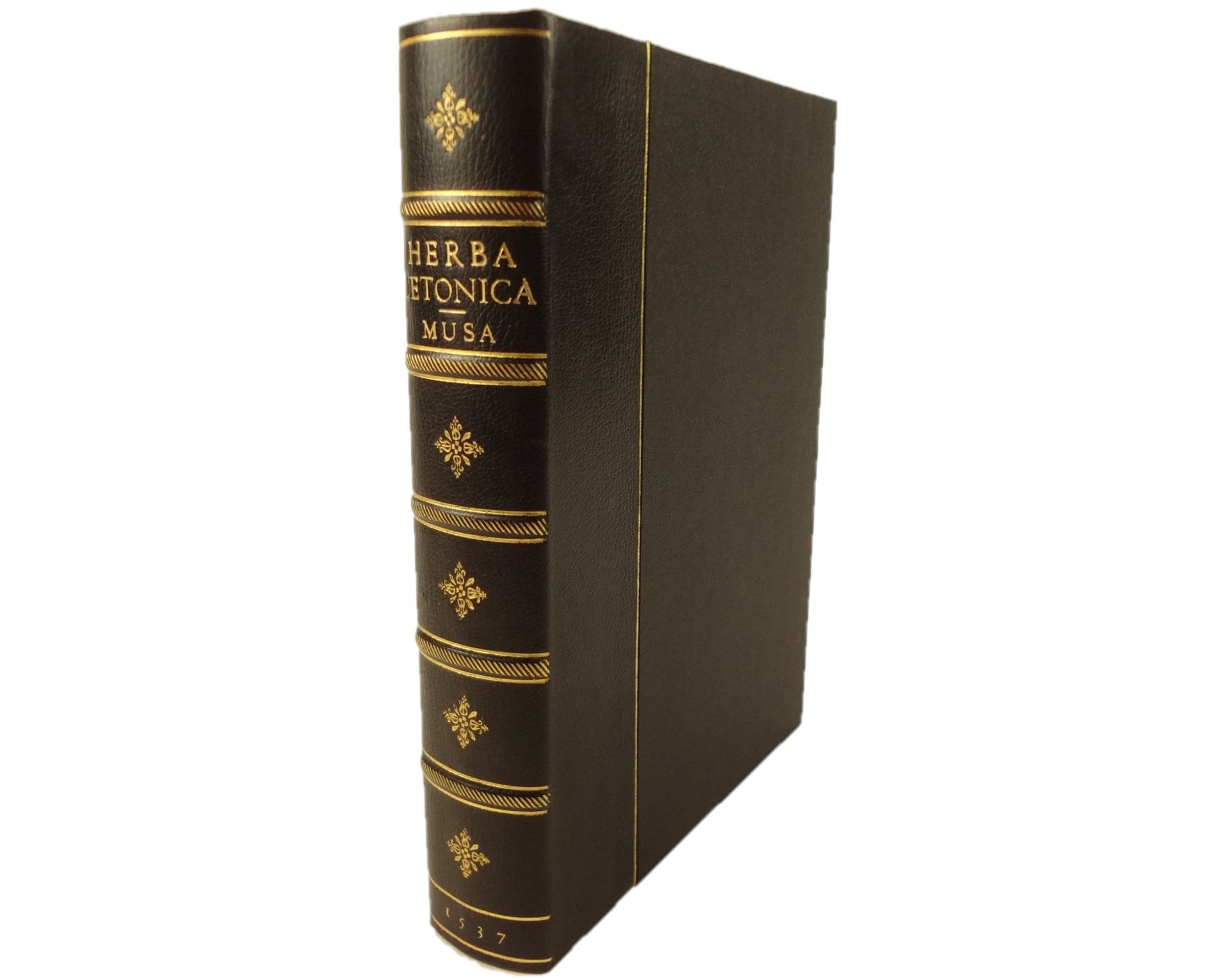 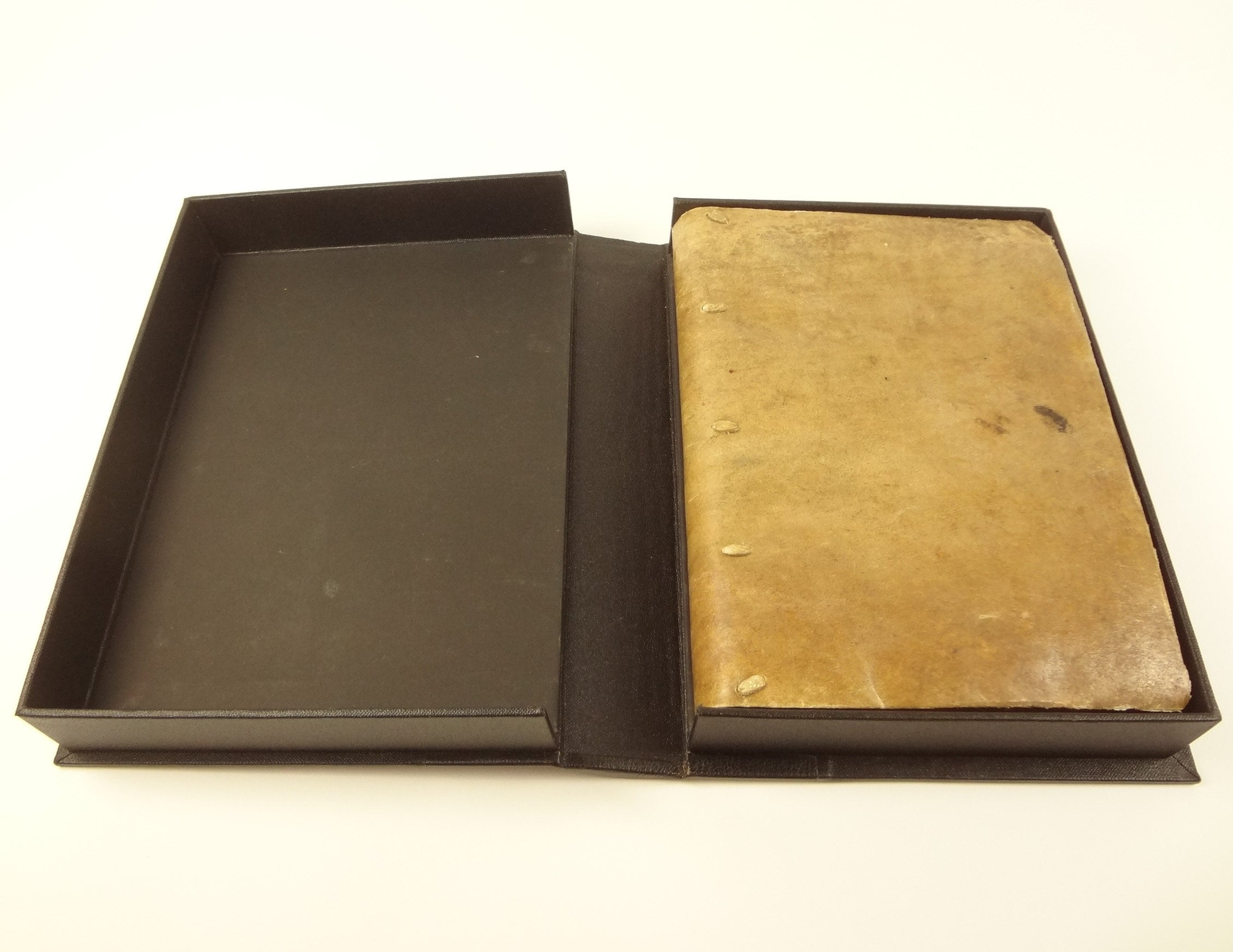 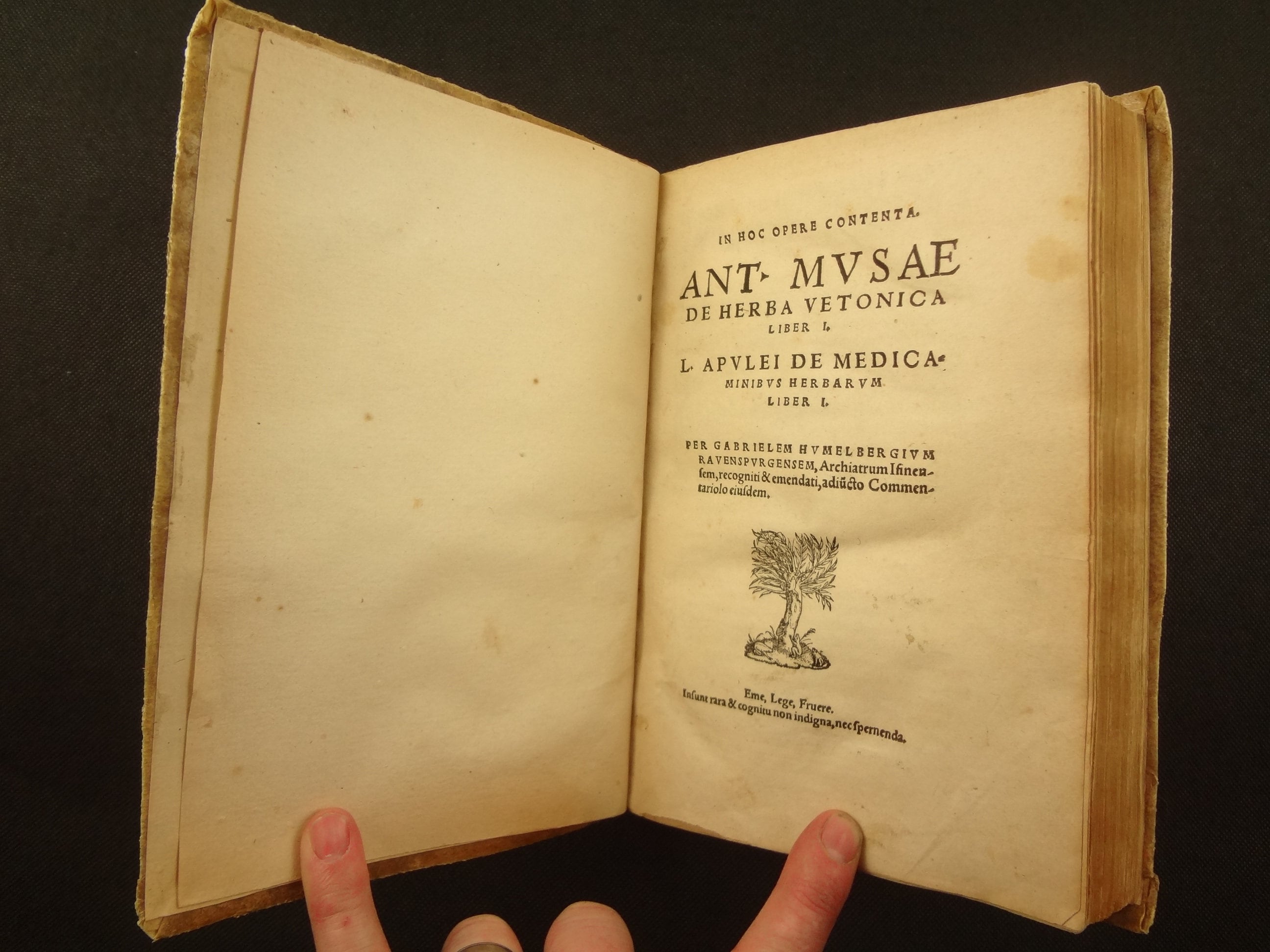 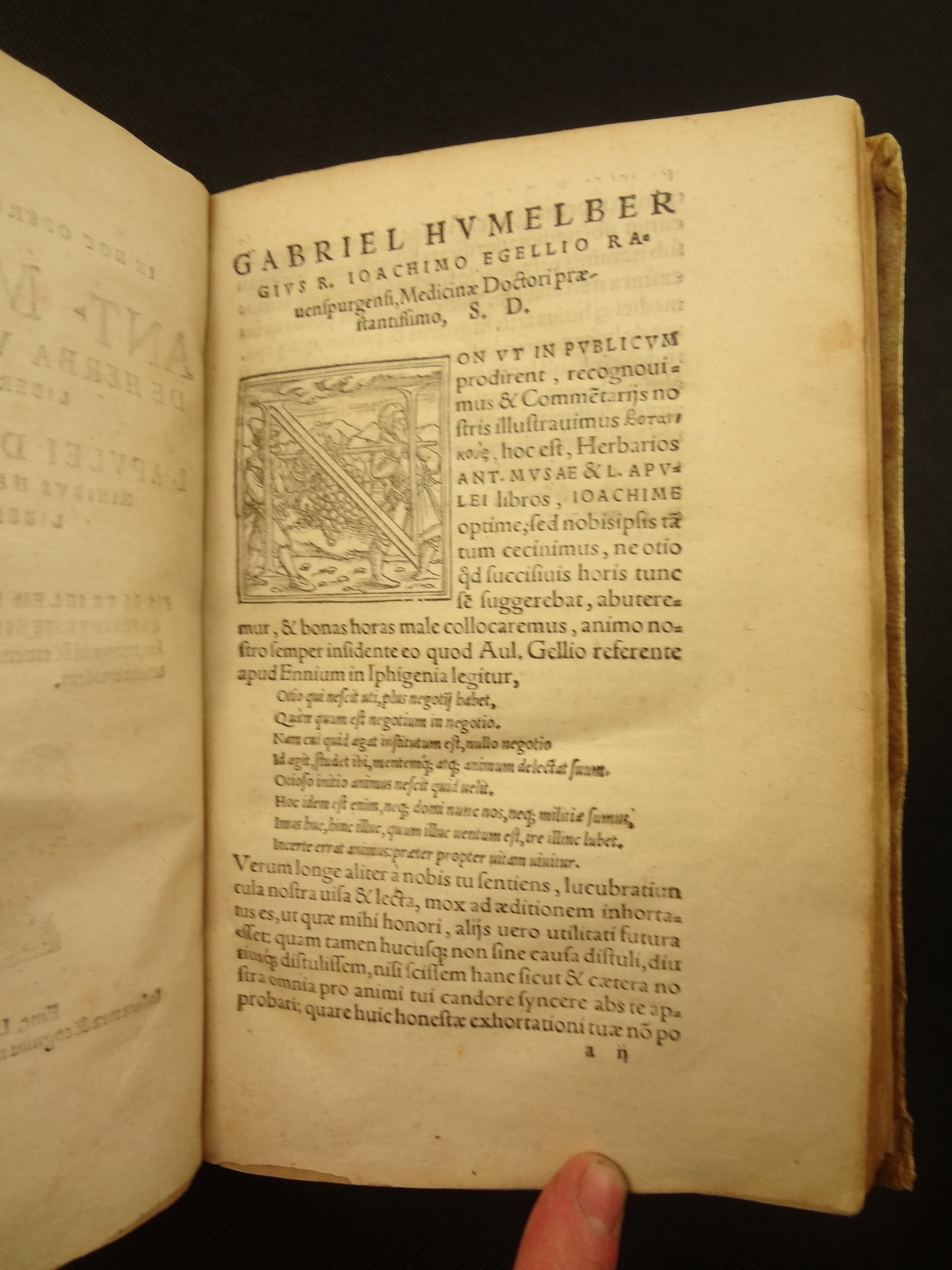 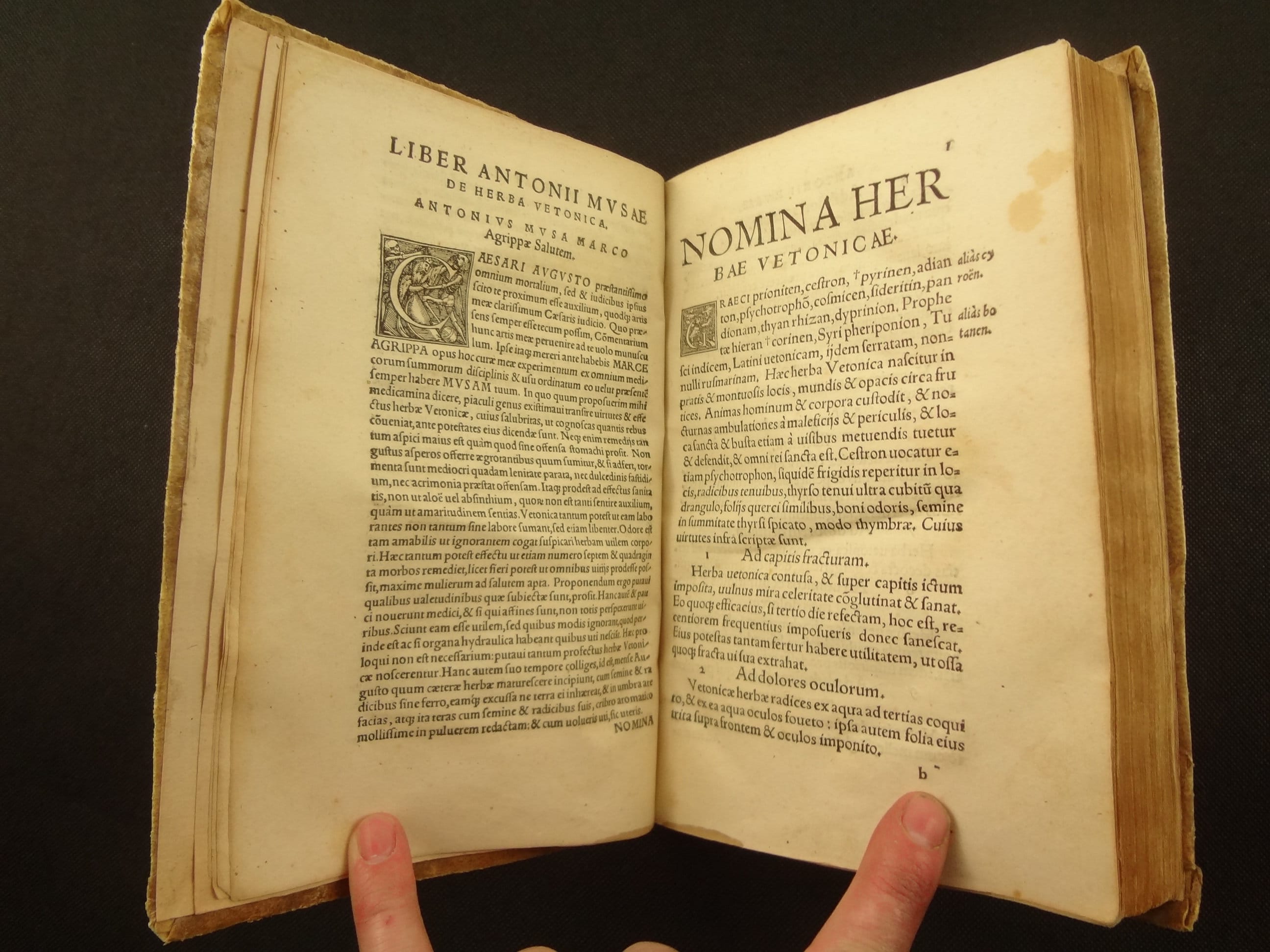 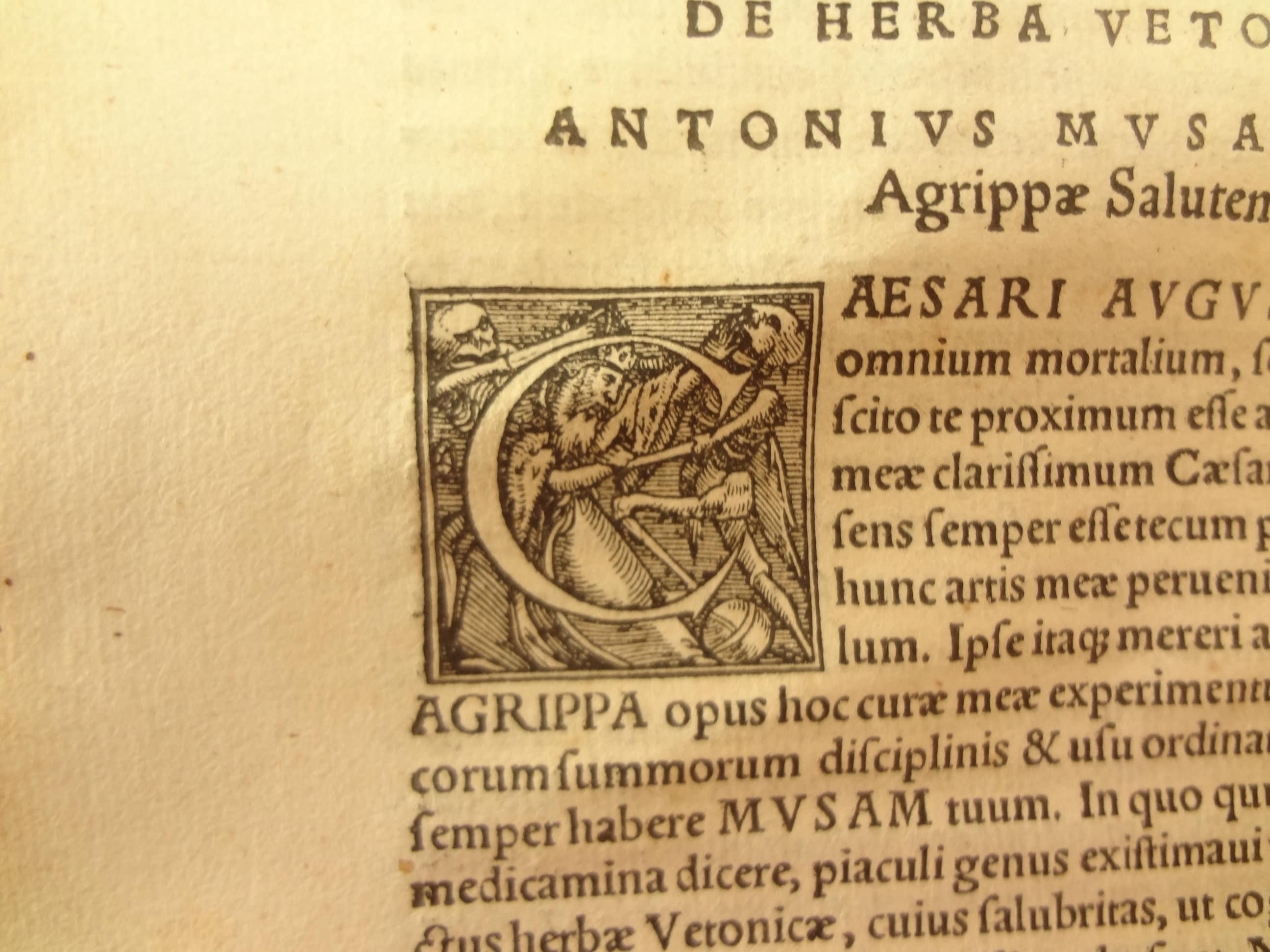 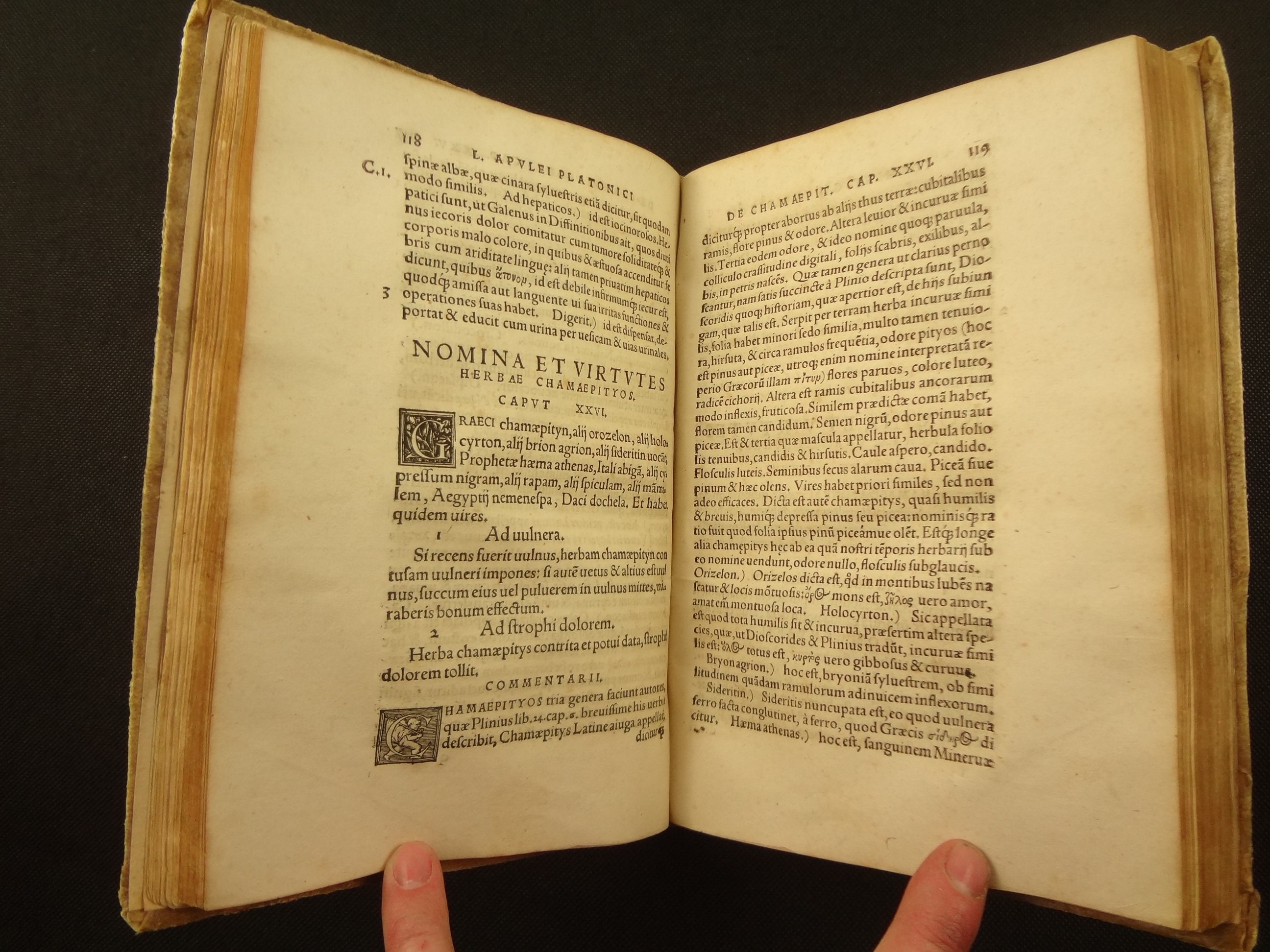 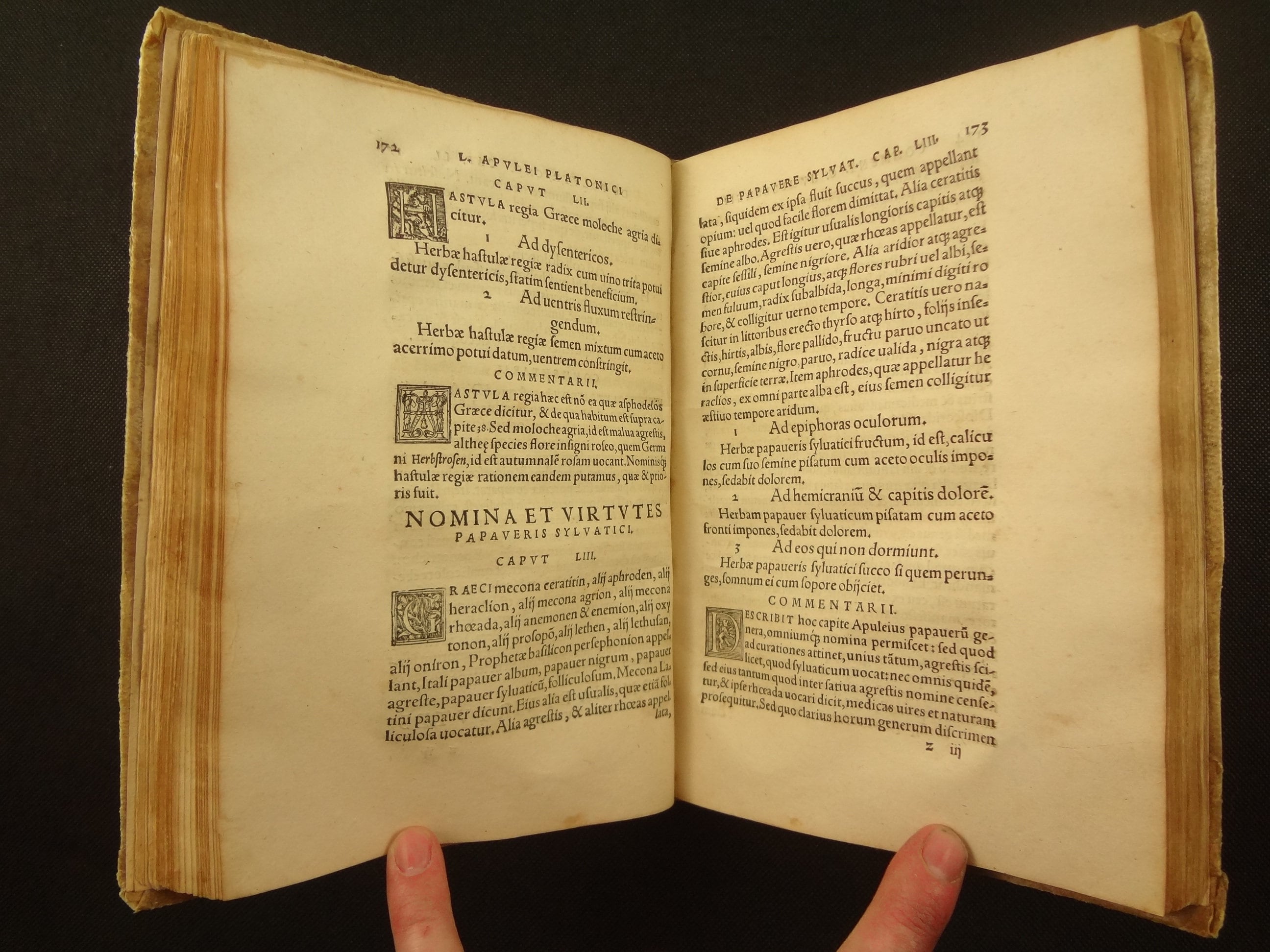 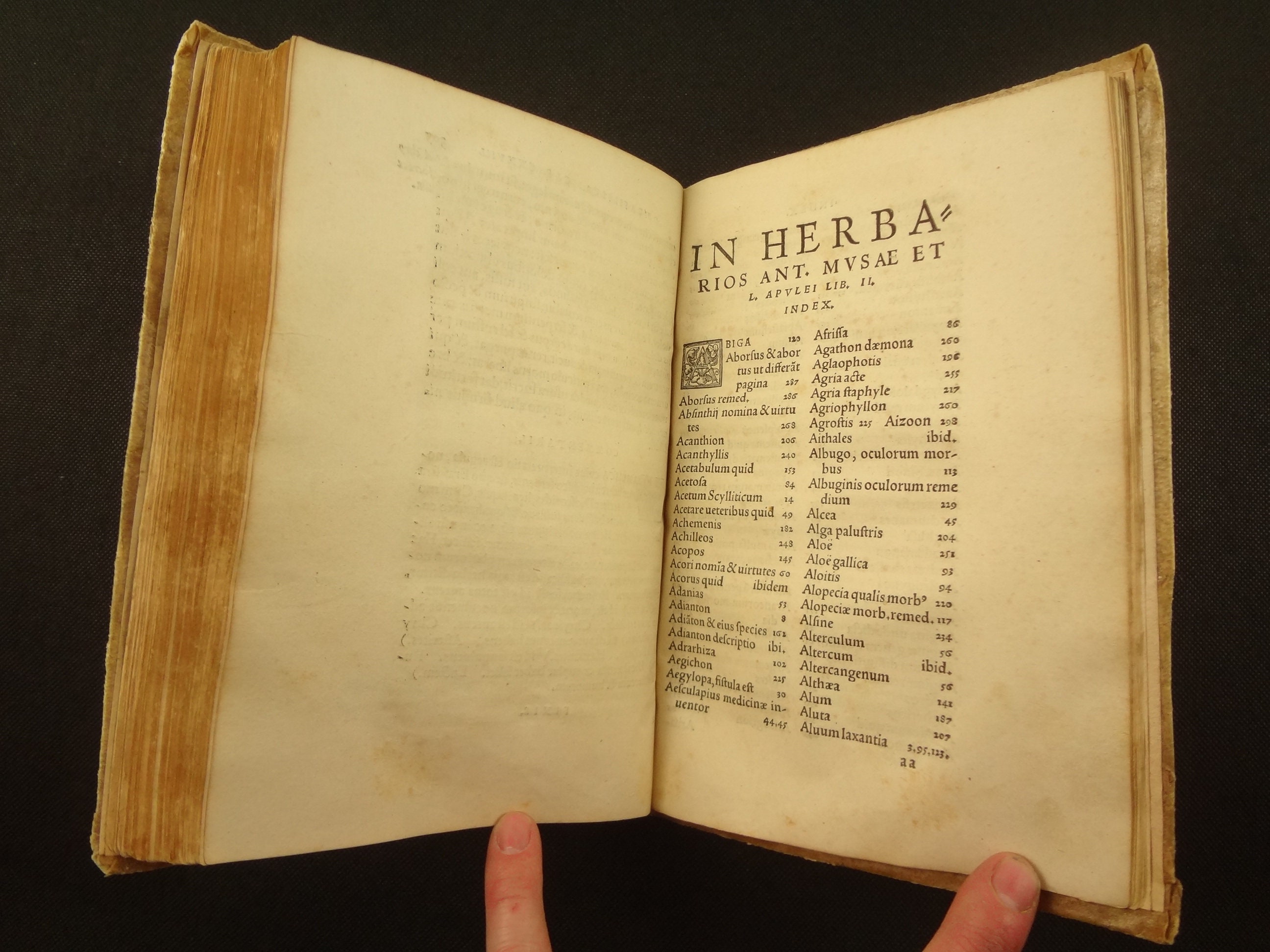 A first edition 1537 compilation of the Roman Musa's herbal Vetonica writings, and the 4th century Apuleius' herbarium (128 herbs), as edited by the German doctor Gabriel Hummelberger.

The Musa and Apuleius attributions are doubted, but regardless of authorship, Hummelberger compiled the healing attributes the medieval period credited to 129 different herbs.

Due to the difficulty in ascribing the larger work directly to Apuleius, the work is defined as "psuedo-Apuleius".

This printing begins with Musa's Herba Vetonica, a work loosely attributed to Musa, and describing the use of the herb Vetonica (sometimes spelled Vettonica).

There is a commentary by Hummelberger, then follows the Apuleius work.

In the Apuleius work, each of the 128 herbs has a section defining the it (mostly by names by country), what it should be used for (and how), and lastly commentary.

Book II is a labelled Index, at the rear, which directs the reader to different sections based on keywords; for example, "Aspis, Serpens - 88" (Asps, serpents).

Antonius Musa was a Greek botanist and the Roman Emperor Augustus's physician; Antonius was a freedman who received freeborn status along with other honours. In the year 23 BC, when Augustus was seriously ill, Musa cured the illness with cold compresses and became immediately famous.

Pseudo-Apuleius is the name given in modern scholarship to the author of a 4th-century herbal known as Pseudo-Apuleius Herbarius or Herbarium Apuleii Platonici. The author of the text apparently wished readers to think that it was by Apuleius of Madaura (124–170 CE), the Roman poet and philosopher, but modern scholars do not believe this attribution. Little or nothing else is known of Pseudo-Apuleius apart from this. The oldest surviving manuscript of the Herbarium is the sixth-century Leiden, MS. Voss. Q.9. Until the twelfth century it was the most influential herbal in Europe, with numerous extant copies surviving into the modern era, along with several copies of an Old English translation.

There is one inhabited initial, after Hans Holbein's "C", showing two skeletons fighting an emperor, but it is known that the publisher copied Holbein's Dance of Death letters, but did not use Holbein's as small differences arise when compared.

See pictures. Limp vellum binding soiled and darkened, some edge wear. Ink thumb mark on front board. Nice wide margins throughout. Damp mark at bottom near gutter that just barely intrudes onto the paper throughout first half. Occasional thumb, rust/fox spot throughout. A little toning to paper. No annotations. Occasional dog-eared page. Clamshell box is handsome, with little wear.