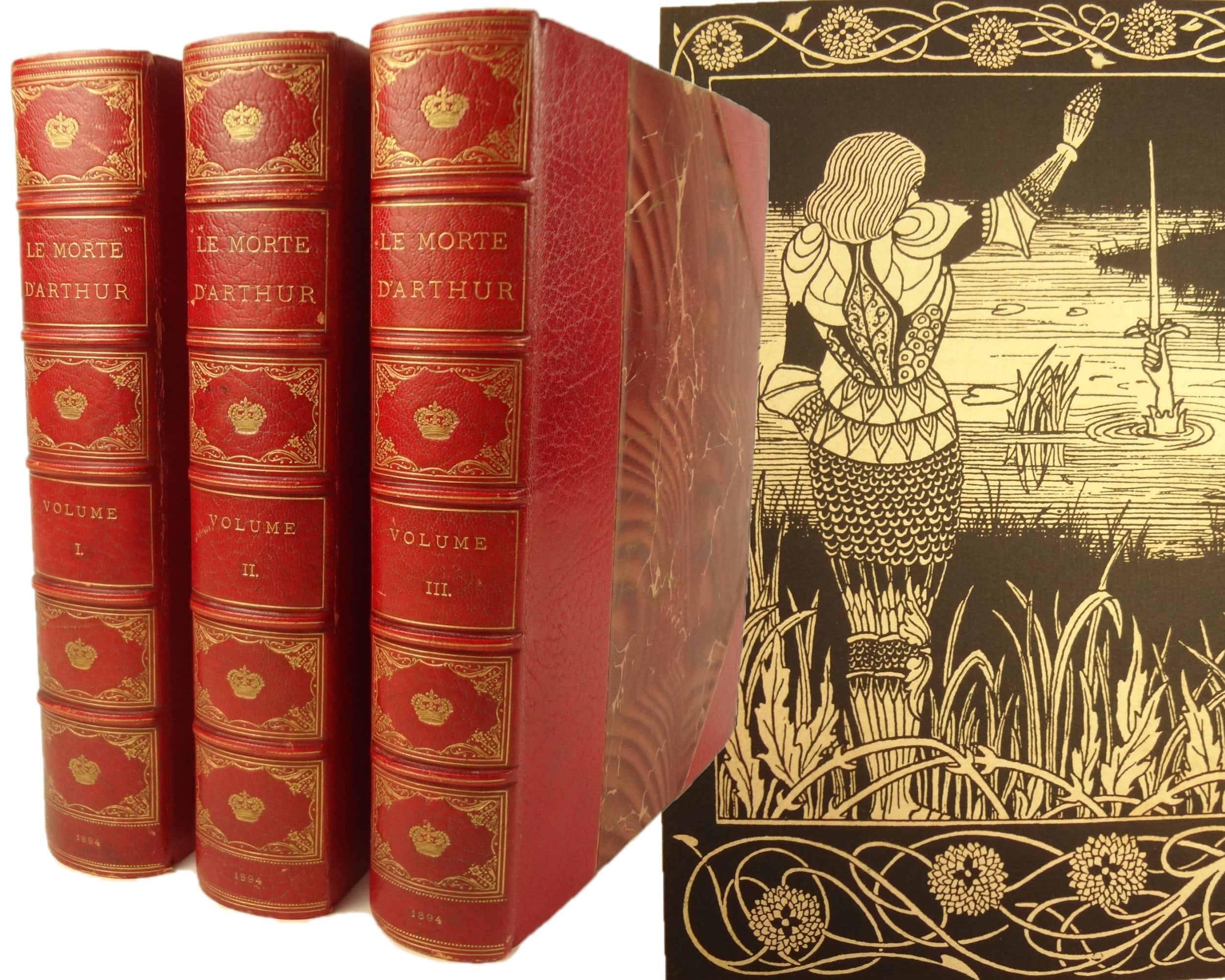 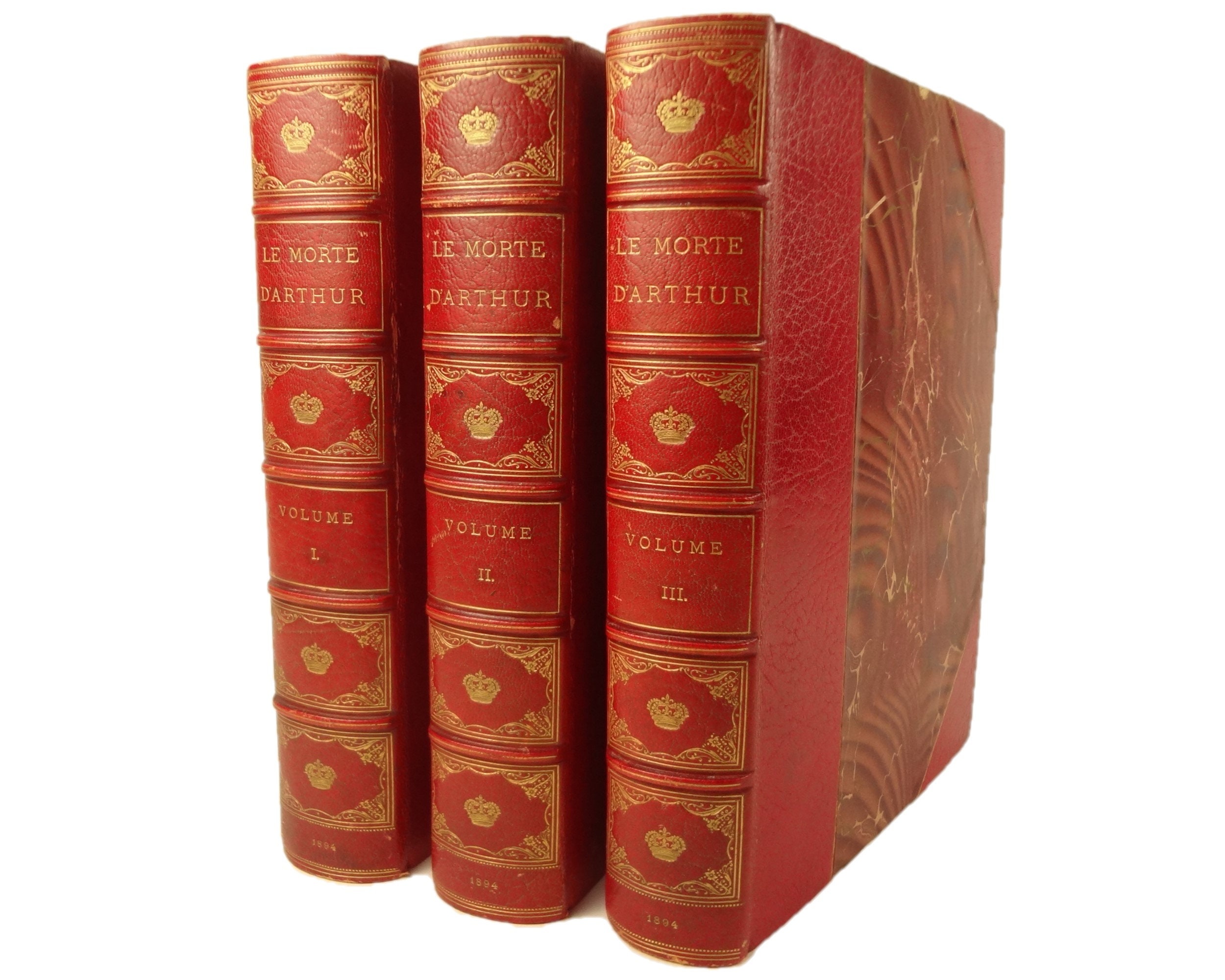 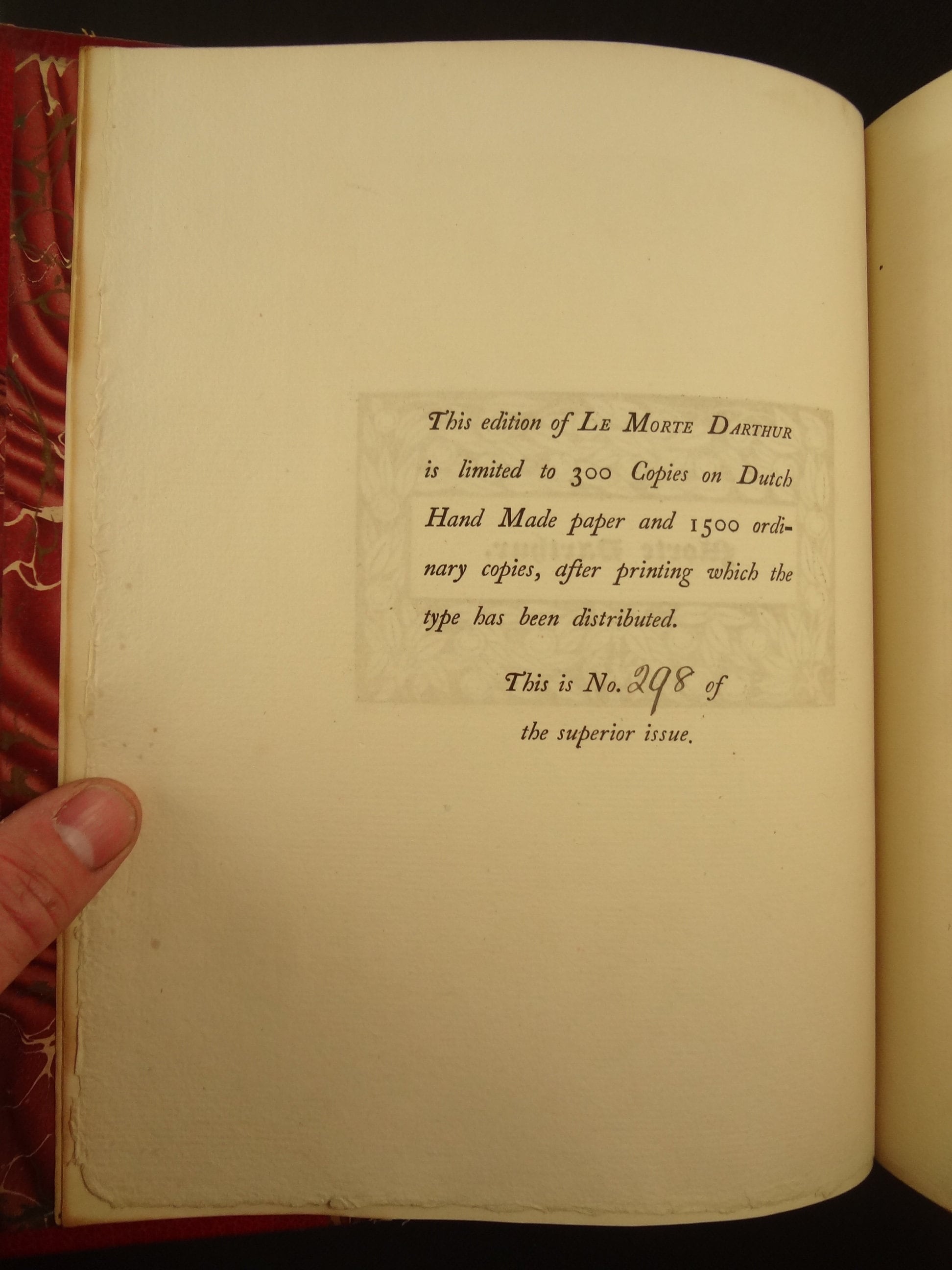 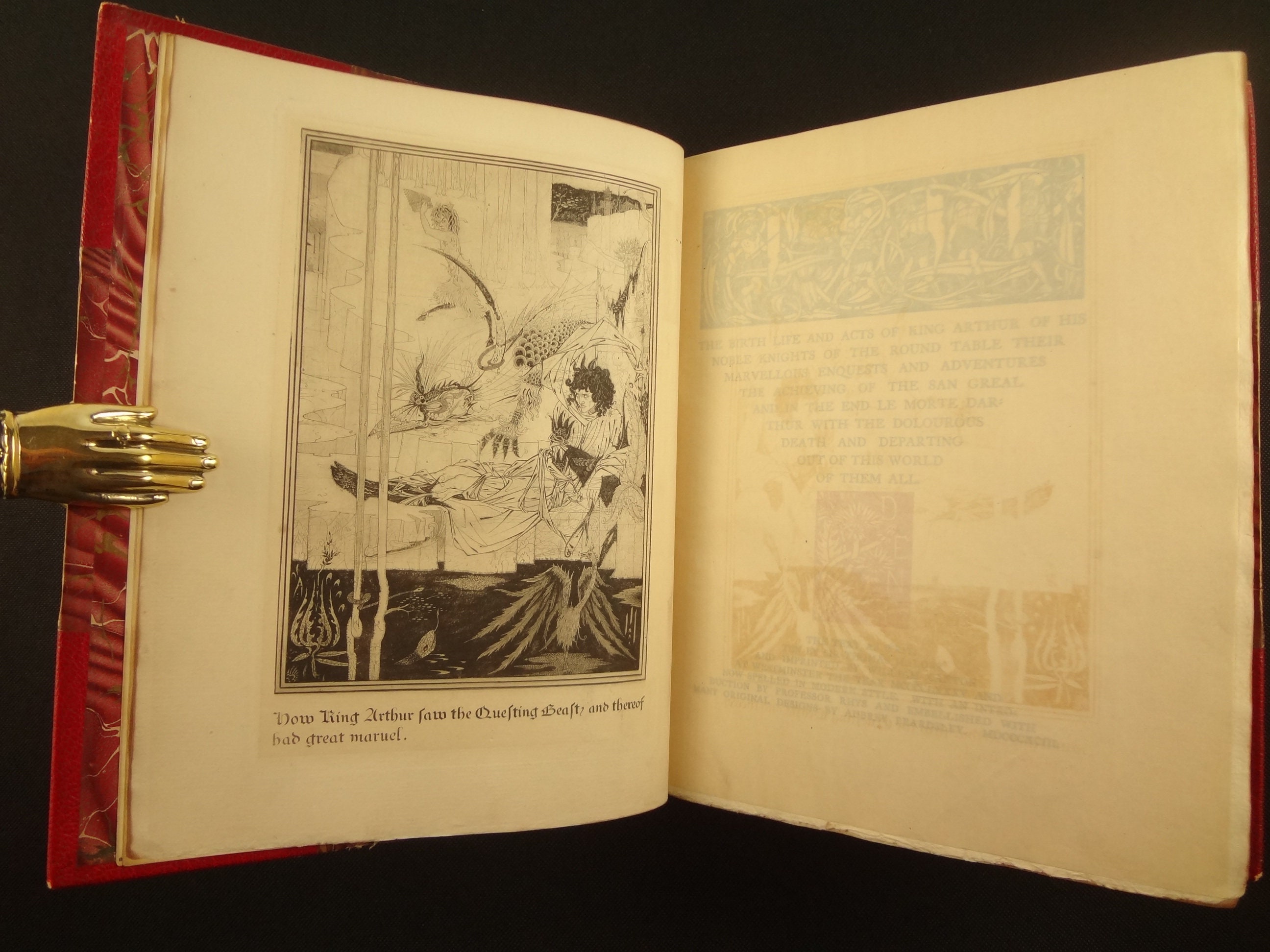 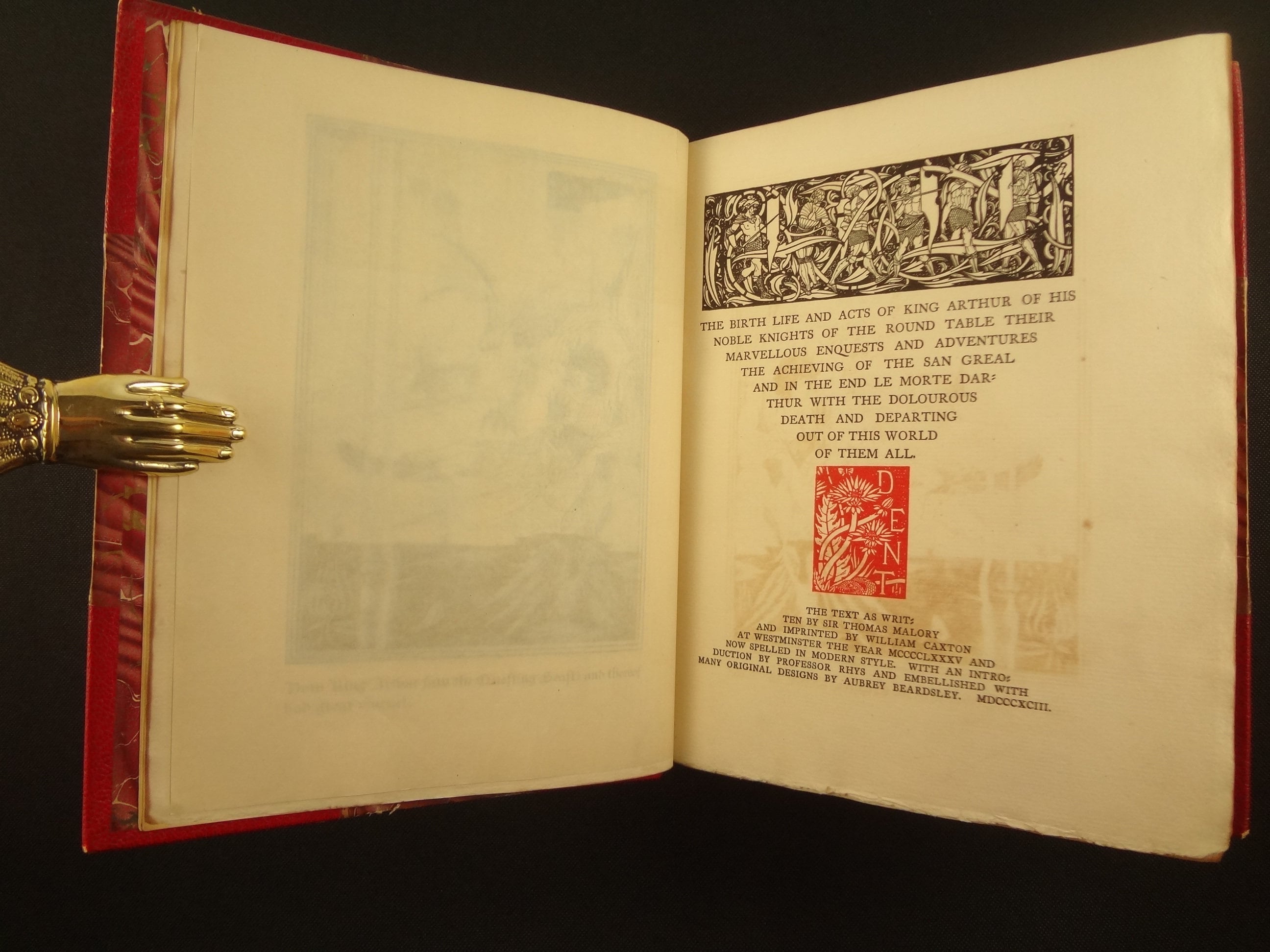 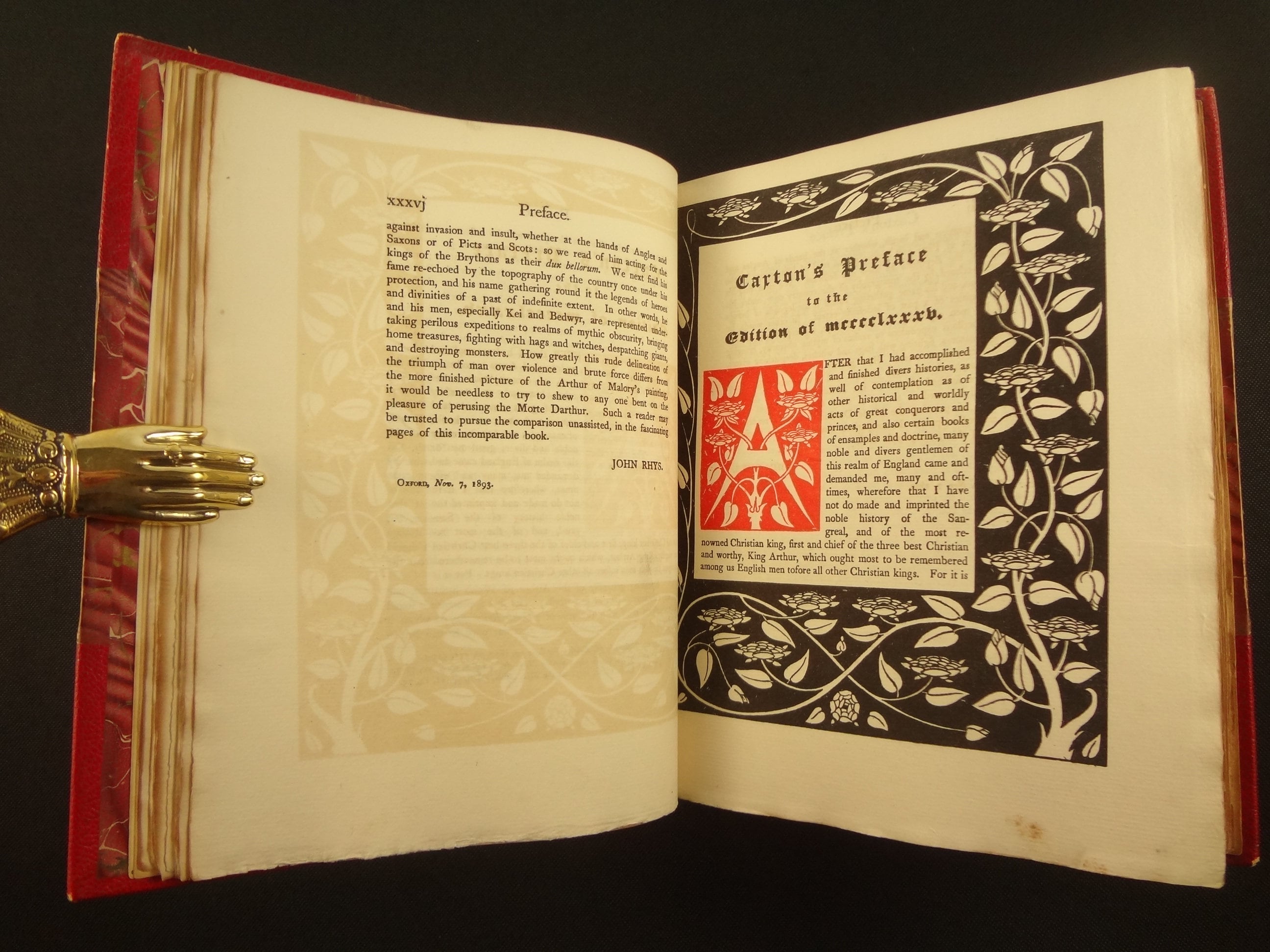 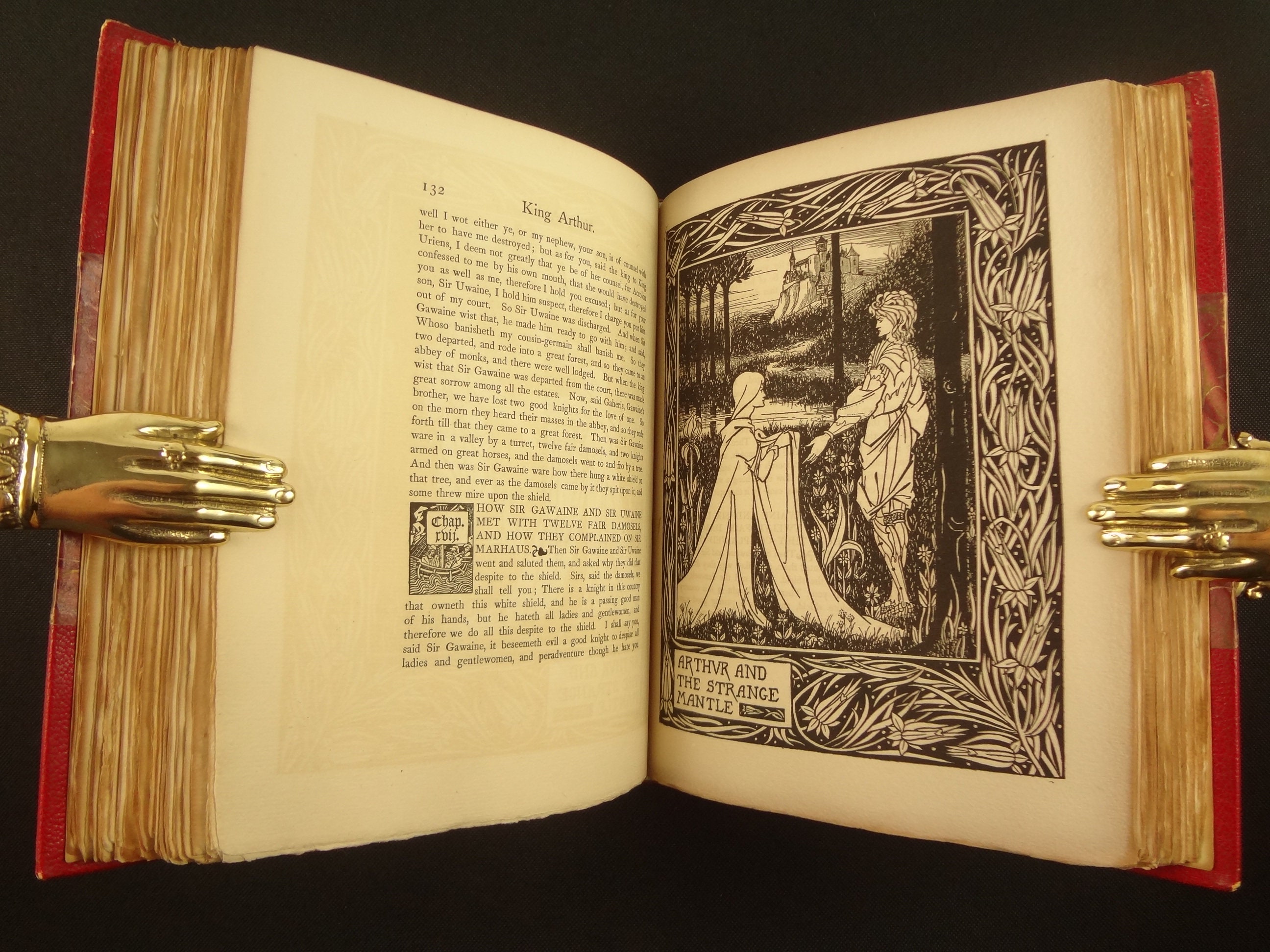 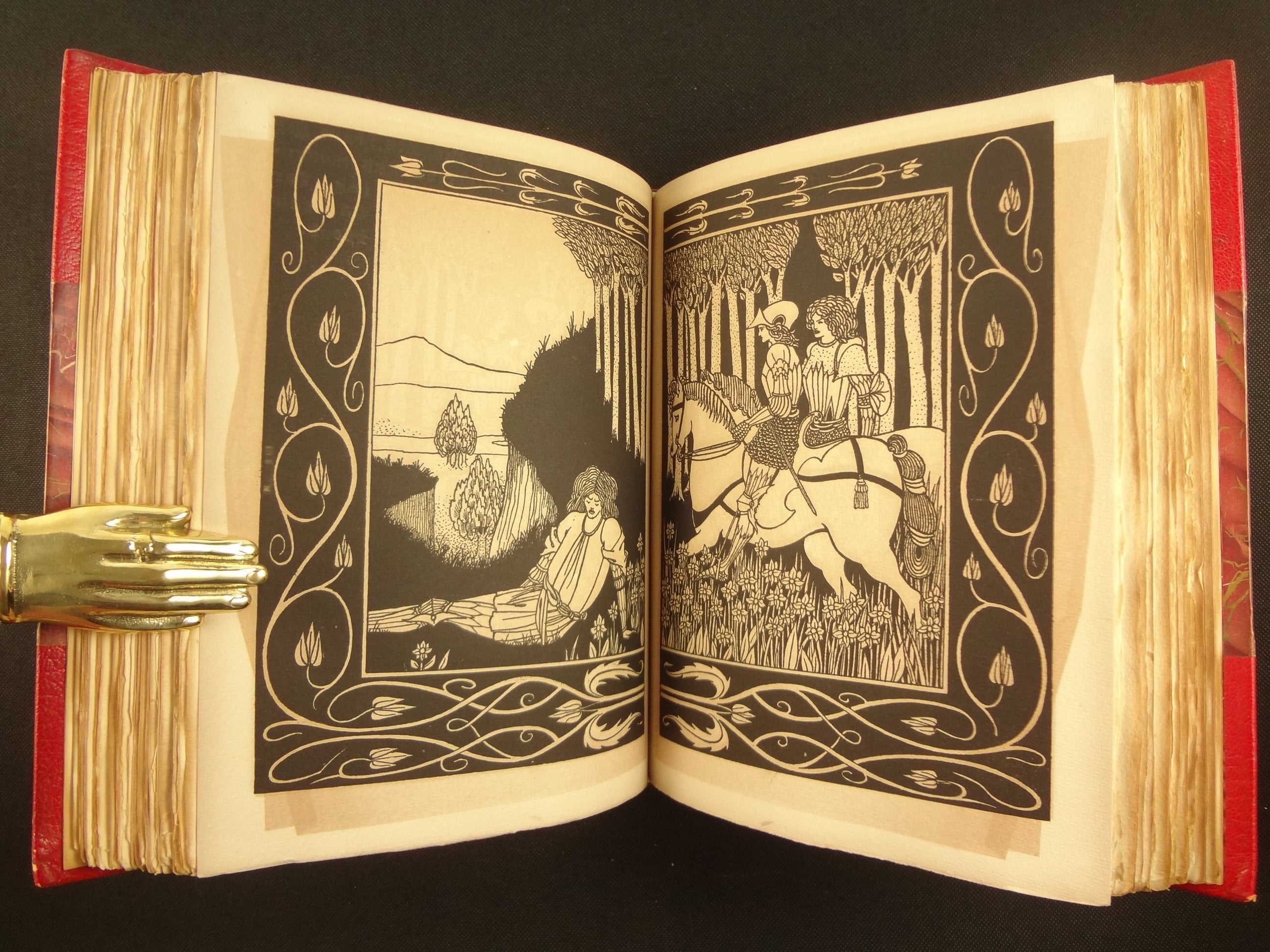 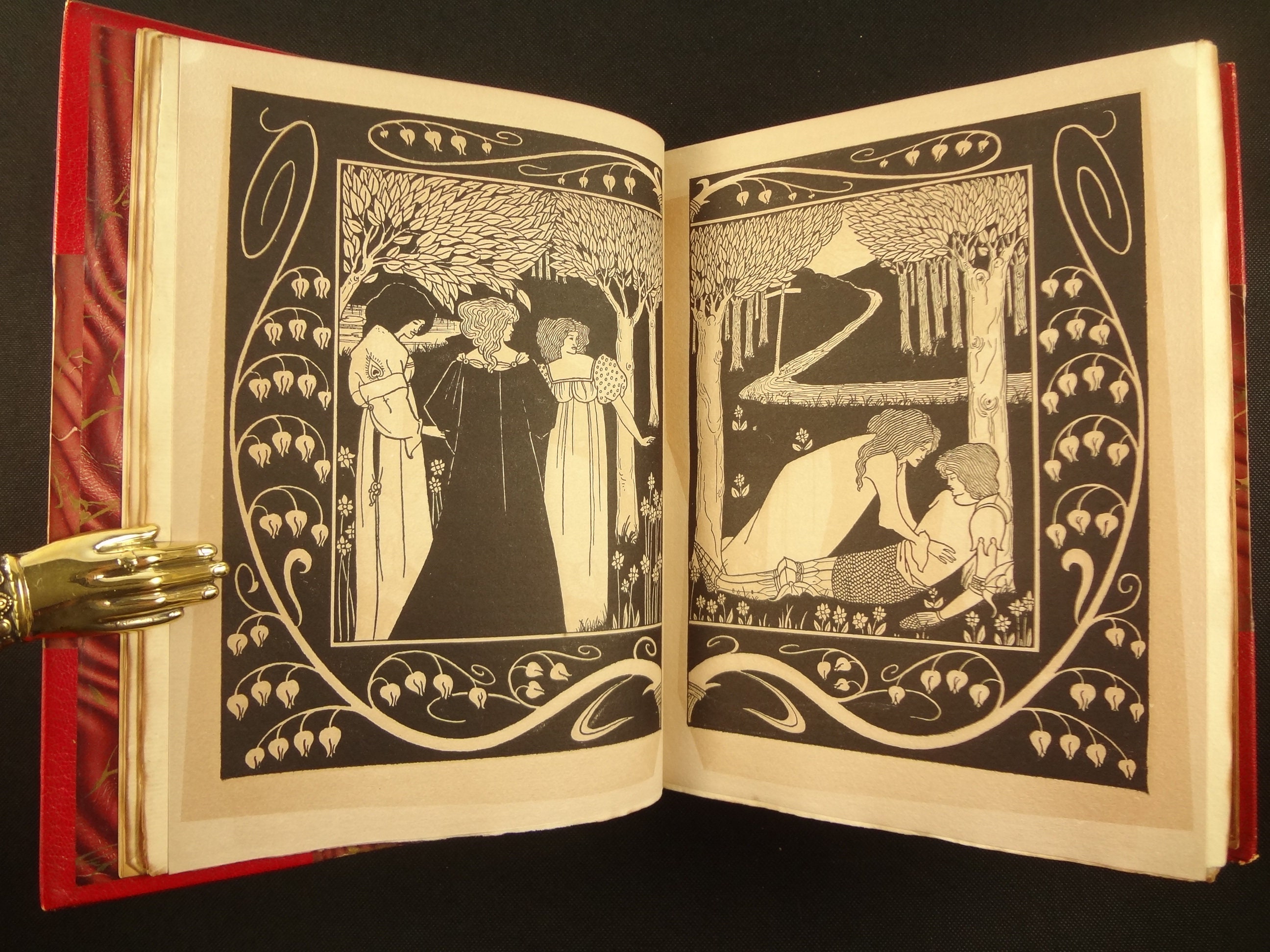 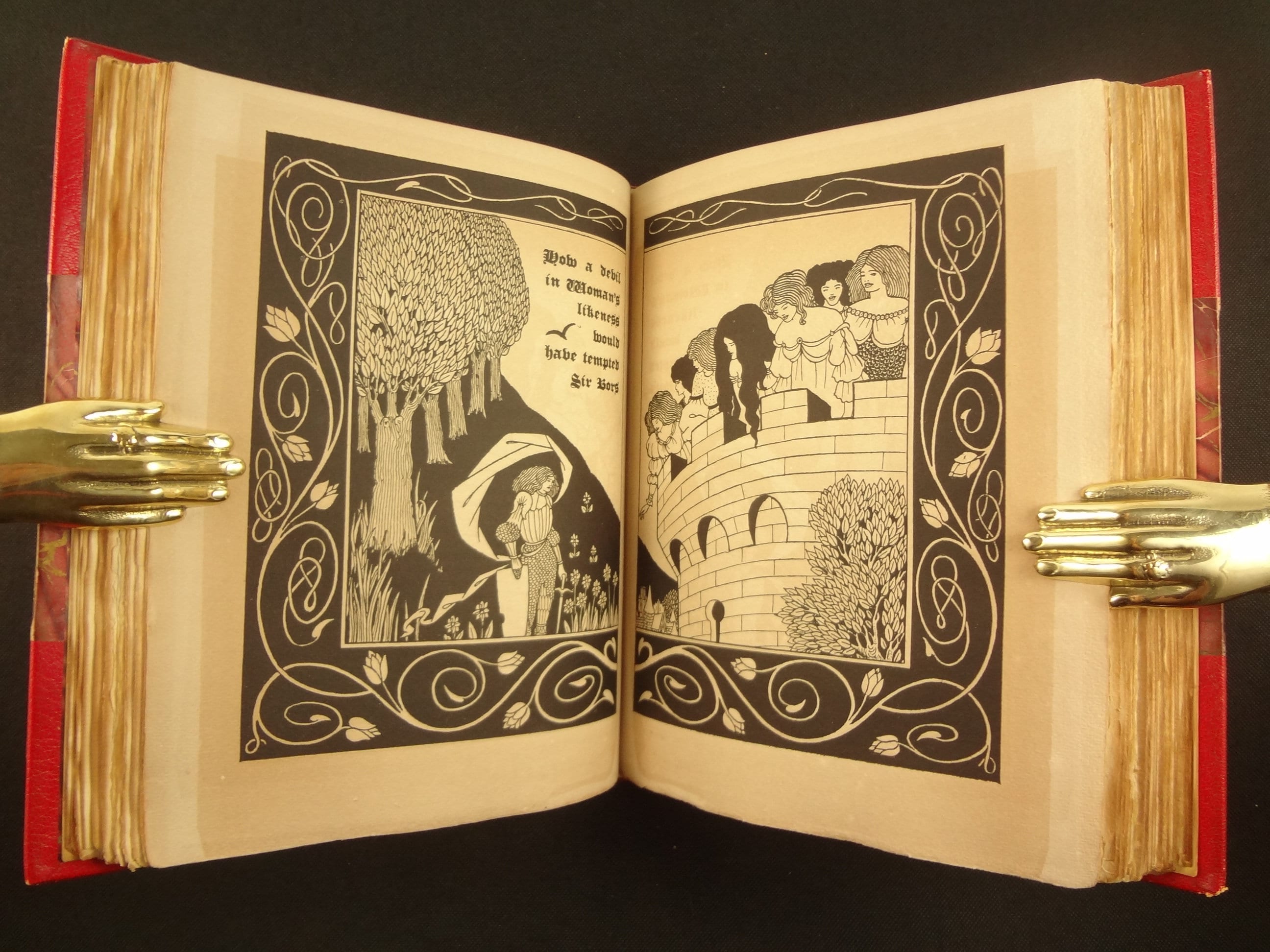 From its wonderful typography, to its beautiful illustrations, this work has been stunning readers for over a century. Copies of the "superior issue" reside in the world's finest libraries, including the Morgan, Beinecke Rare Book Library, etc..

When the Swann gallery auctioned several of the original Beardsley embellishments, they wrote, "To please Dent and emulate his artistic heroes, Beardsley's first drawings were modeled after the Kelmscott artist, Edward Burke-Jones. This enraged (William) Morris, who accused Beardsley of plagiarism".

Unfortunately, this copy is missing one plate, "Merlin & Nemue". There is no damage at the gutter, nor is there the ghosting common to all the other plates; it seems the binder simply never inserted it.

Morte Darthur is a 15th-century Middle English prose reworking by Sir Thomas Malory of tales about the legendary King Arthur, Guinevere, Lancelot, Merlin and the Knights of the Round Table—along with their respective folklore. In order to tell a "complete" story of Arthur from his conception to his death, Malory compiled, rearranged, interpreted and modified material from various French and English sources. Today, this is one of the best-known works of Arthurian literature. Many authors since the 19th-century revival of the legend have used Malory as their principal source. Written in prison, Le Morte d'Arthur was first published in 1485 at the end of the medieval English era by William Caxton.

This text was taken from that of the Caxton edition.

These volumes have the stamp (verso of flyleaf, v2) of the bookbinding firm Bradstreet's of New York. In Henri Pene du Bois' Historical Essay on the Art of Bookbinding (1883), he writes: "Certainly, none can put a varied colored morocco coat on a book, and gild it with greater perfection in choice of ornament and splendor of gold, and with greater care, taste and success, than Bradstreet's" (p.35).

THE BIRTH LIFE AND ACTS OF KING ARTHUR OF HIS NOBLE KNIGHTS OF THE ROUND TABLE THEIR MARVELOUS ENQUESTS AND ADVENTURES THE ACHIEVING OF THE SAN GREAL AND IN THE END LE MORTE DARTHUR WITH THE DOLOROUS DEATH AND DEPARTING OUT OF THIS WORLD OF THEM ALL.

THE TEXT AS WRITTEN BY SIR THOMAS MALORY AND IMPRINTED BY WILLIAM CAXTON AT WESTMINSTER THE YEAR MCCCCLXXXV AND NOW SPELLED IN MODERN STYLE. WITH AN INTRODUCTION BY PROFESSOR RHYS AND EMBELLISHED WITH MANY ORIGINAL DESIGNS BY AUDREY BEARDSLEY. MDCCCXCIII

"This edition of Le Morte Darthur is limited to 300 Copies on Dutch Hand Made paper and 1500 ordinary copies, after printing which the type has been distributed. This is No. 298 of the superior issue."

See pictures. A little wear to bindings. Rubbing at corners, edges, and front joint of v1. Spines just slightly sunned. Rub at the bottom of the rear board of v3.

Bookplate on pastedowns ("Myra Arthur"). Bookseller notes on verso of flyleaf. Some fox spots at the 1/2 title fore-edge margin v1. Some toning, a little darkening of the edges, and occasional fox spot throughout all three volumes. Illustrations have ghosted onto the facing leaf. No Merlin and Nemue plate in v1. Especially for volumes 2 and 3, where the tissue guards remained in place, the facing page and plate was toned heavily, and also some of the rubricated chapter headings; most of the illustrations in the last two volumes are affected such. In the margins there is a very occasional thumb and, more often, a few spots of rust likely caused by thumbing (fore-edge location, and some bottom edge). Despite notes, overall an attractive and beautifully illustrated "superior" set.