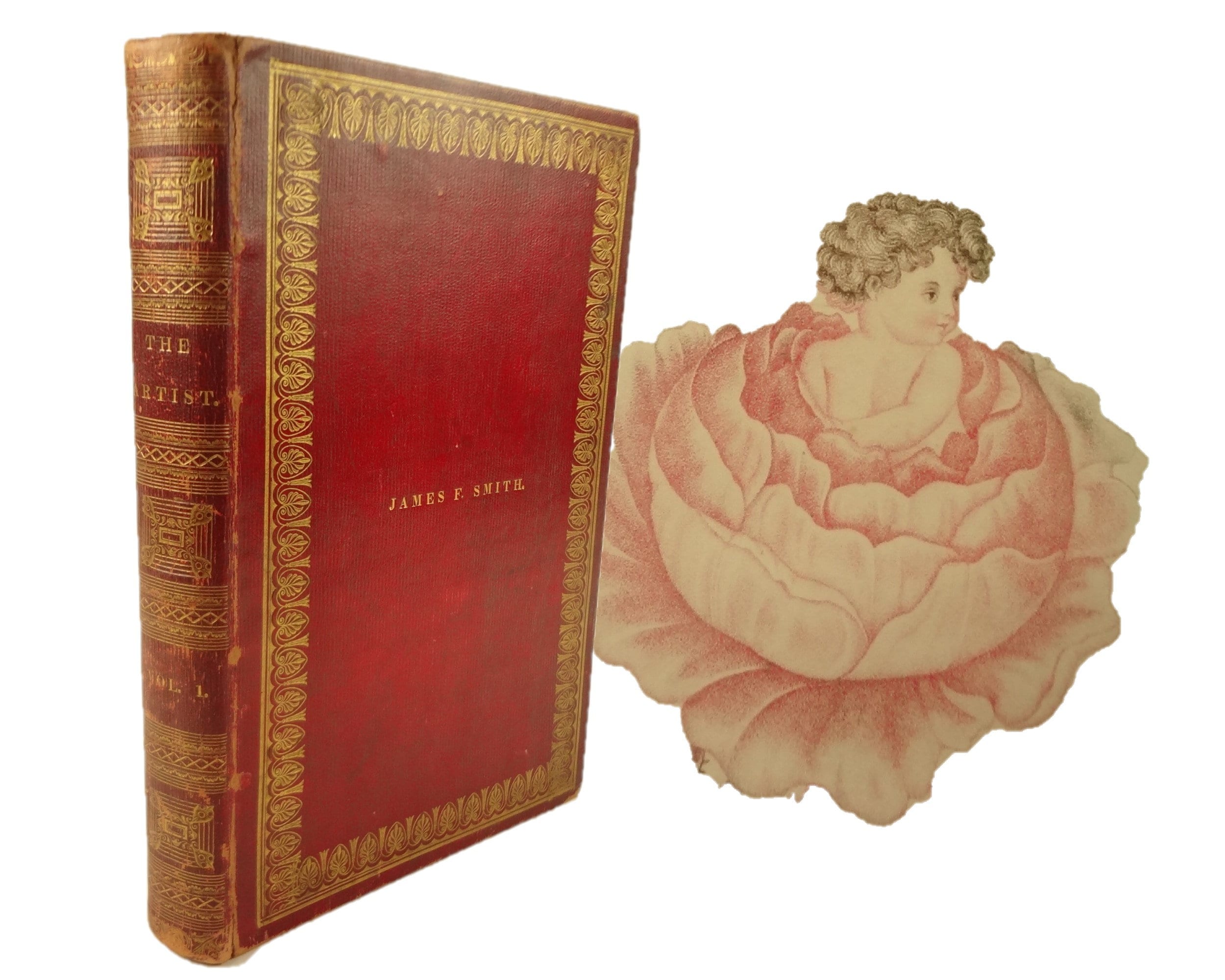 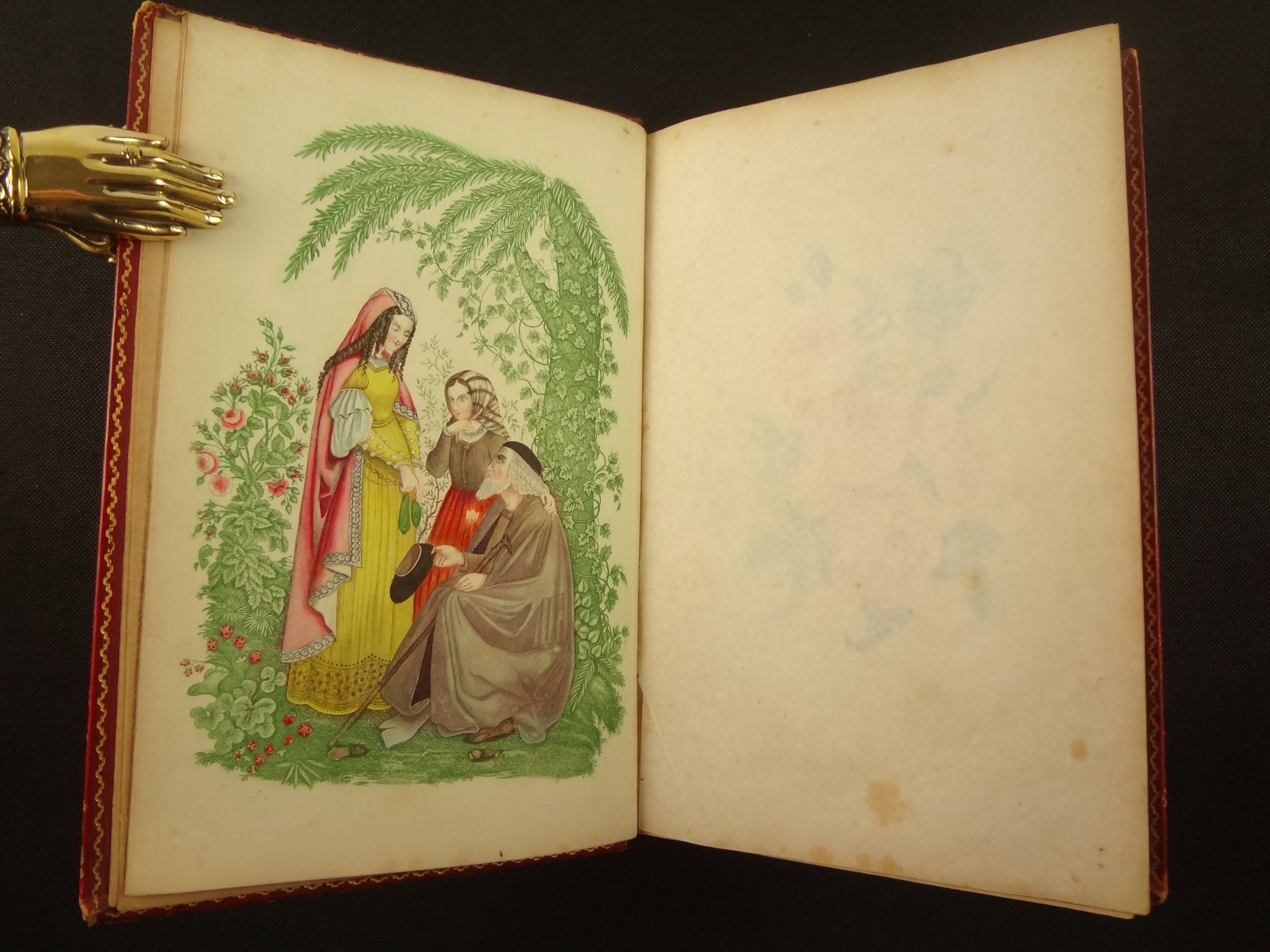 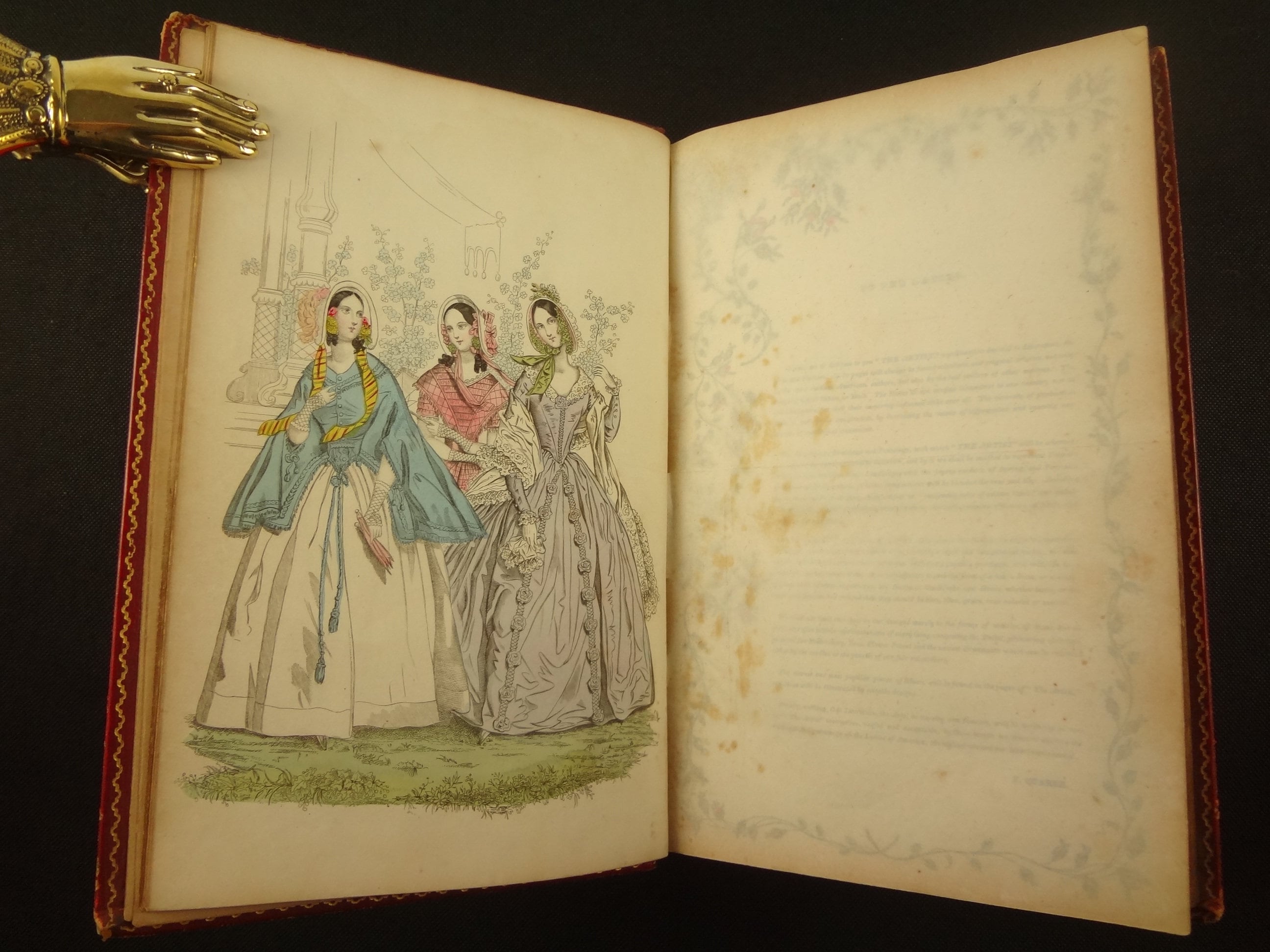 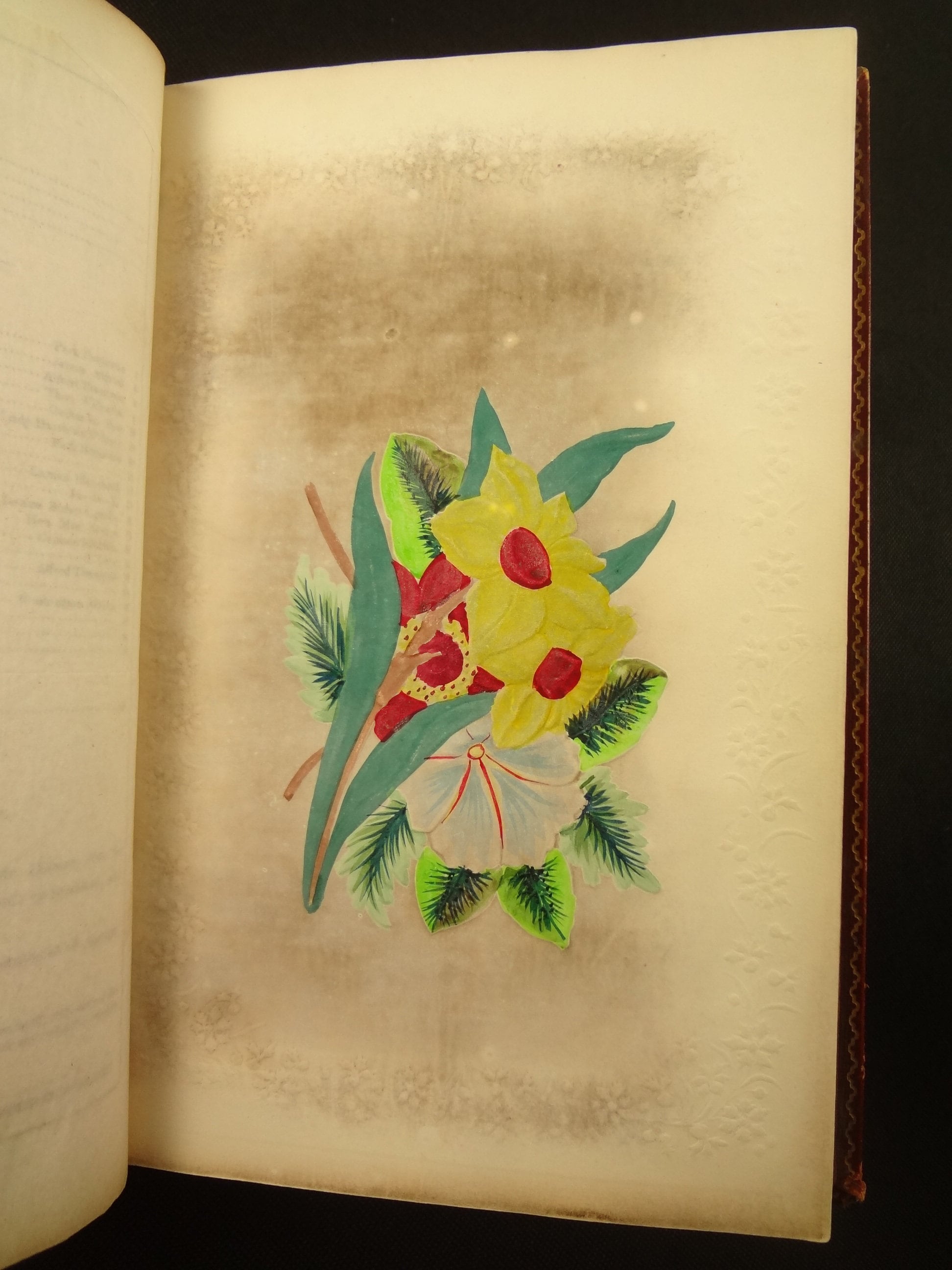 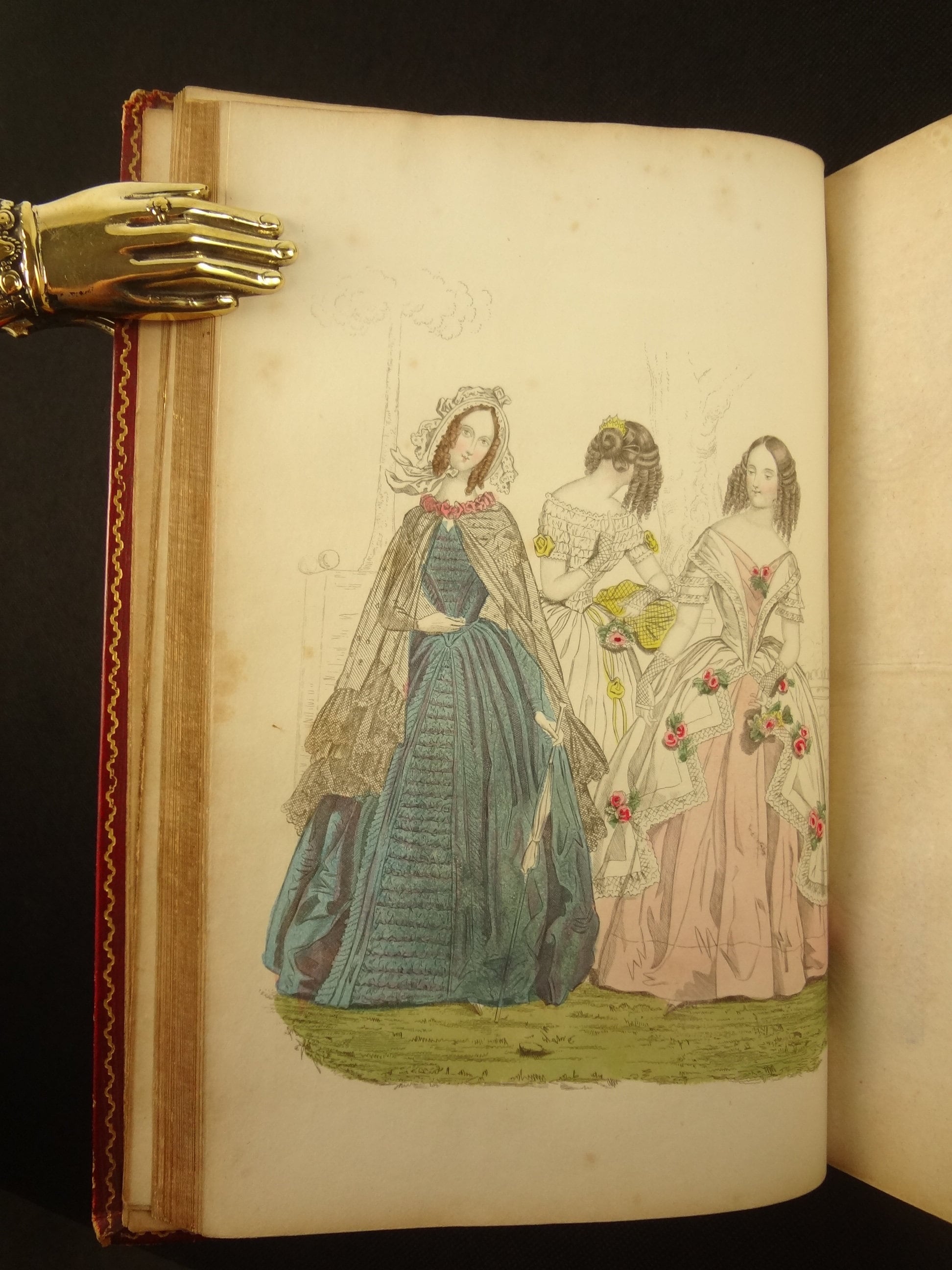 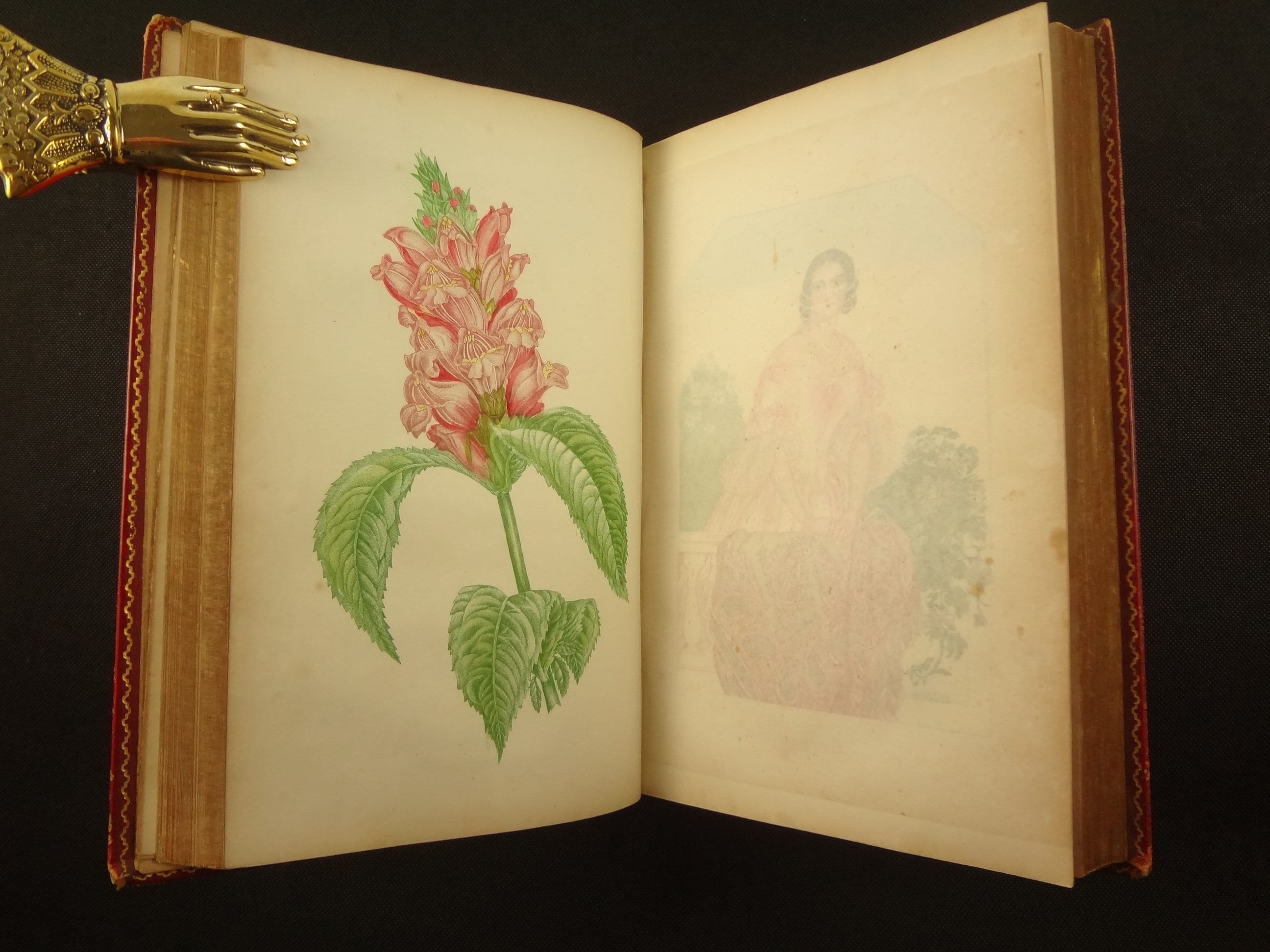 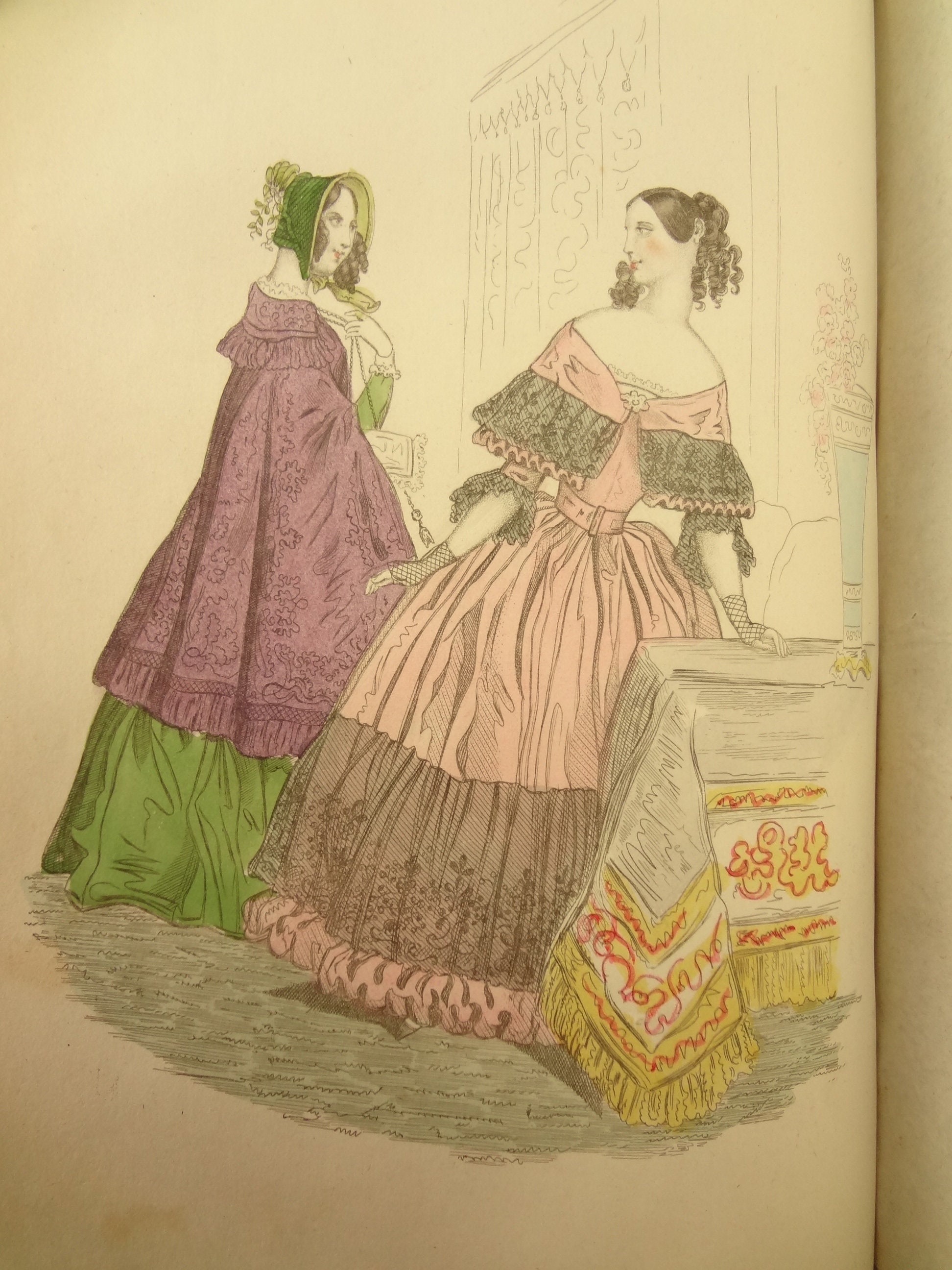 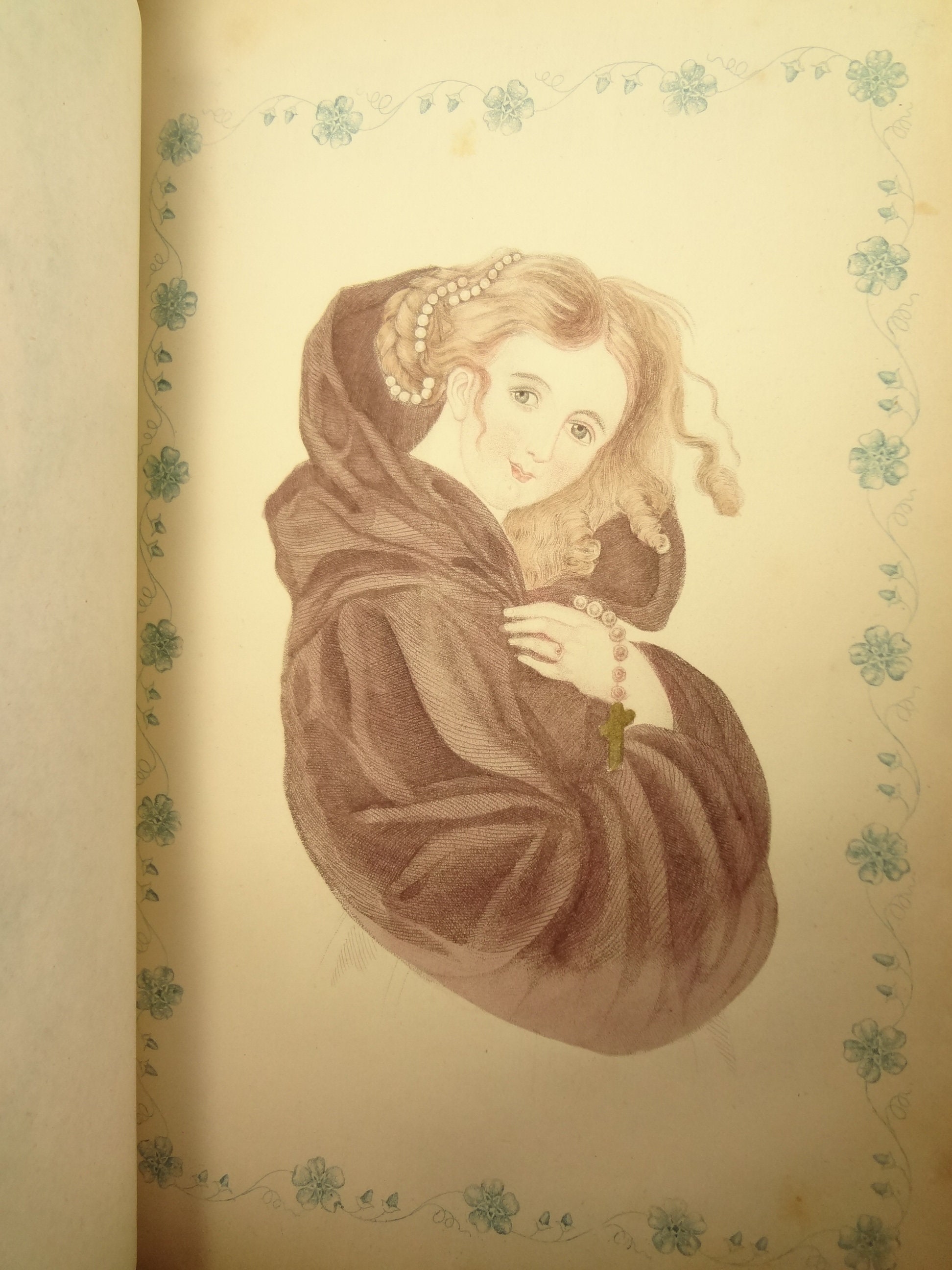 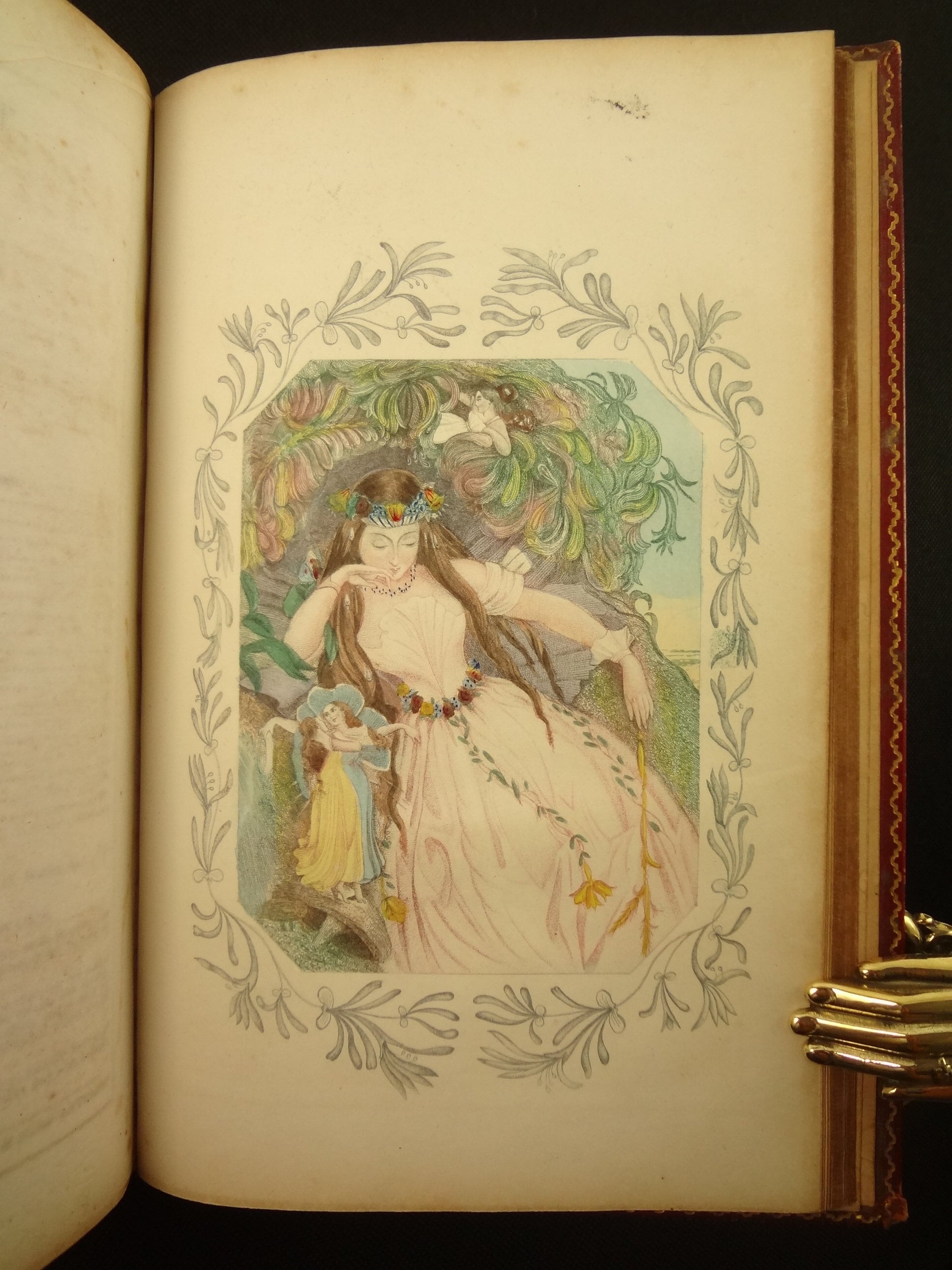 A beautiful and scarce work, the first six issues of The Artist, A Monthly Lady's Book, attractively bound in straight-grain red morocco leather.

In 1842 color printing was in its infancy. The editor, and artist, F. Quarre, in the introduction to the first issue, takes great care to state that the newest color printing methods would be used.

"The Engravings, Drawing and Paintings, with which 'The Artist' will be adorned are executed by a process hitherto unknown, and by it we shall be enabled to represent Flowers with their own brilliant tints,; Landscapes with the joyous verdure of Spring, and Portraits of young and lovely women, in whose complexions will be blended the rose and lily. Avoiding the ordinary mode of clothing every subject in 'customary suits of solemn black,' our embellishments will present the gladsome hues of nature, the lively coloring of flowers, of birds, and of fashionable costumes."

The Artist was "devoted to Literature, the Arts and Fashion."

Not a cheap endeavor, subscription was $3 annually (per the colophon at the last page of printing), which a CPI inflation calculator estimates at $96 in 2021; the scarcity of the work can be partly attributed to this. Also, after the six issues here included, only an additional six were printed. Complete runs of all twelve issues can be found on the market for $3,000 (in 2021).

In 1843 The Artist merged with World of Fashion, to become The Ladies' National Magazine (advertisements page, Brother Jonathan, for the week ending Dec. 16, 1843).

In addition to fashion, and bouquets, the literature includes small works by authors such as Alfred Tennyson, James Aldrich, Emma Roberts, Mrs. Edward Thomas and a number by Park Benjamin Sr. (among others).

Each issue also concludes with a popular music piece, with notes and lyrics.

This volume includes issues 1to 6, which cover September of 1842 through February of 1843. The pagination is continuous, so this volume may have been issued after the initial print run, although the thick paper illustrations at the beginning of each issue seems likely to have been the separate issue covers.

Small note: there are some embossed flowers that seem to be hand painted, but in issue six the embossed flower plate is blank of color. It may have been that the flowers were sent without color, allowing the subscriber to paint them at their leisure.

See pictures. Edge, joint and corner wear to the bindings, with some rubbing. Joints have small cracks at the top and bottom, but are holding. Toning and some foxing throughout, as is typical of mid-19th century paper; more to blank unpaginated endpapers. Erased bookseller price on endpaper. James F. Smith written in graphite on recto (rear) of 1st issue cover. Several of the plates oddly darkened, perhaps they reacted to the tissue cover. Occasional dog-eared page.