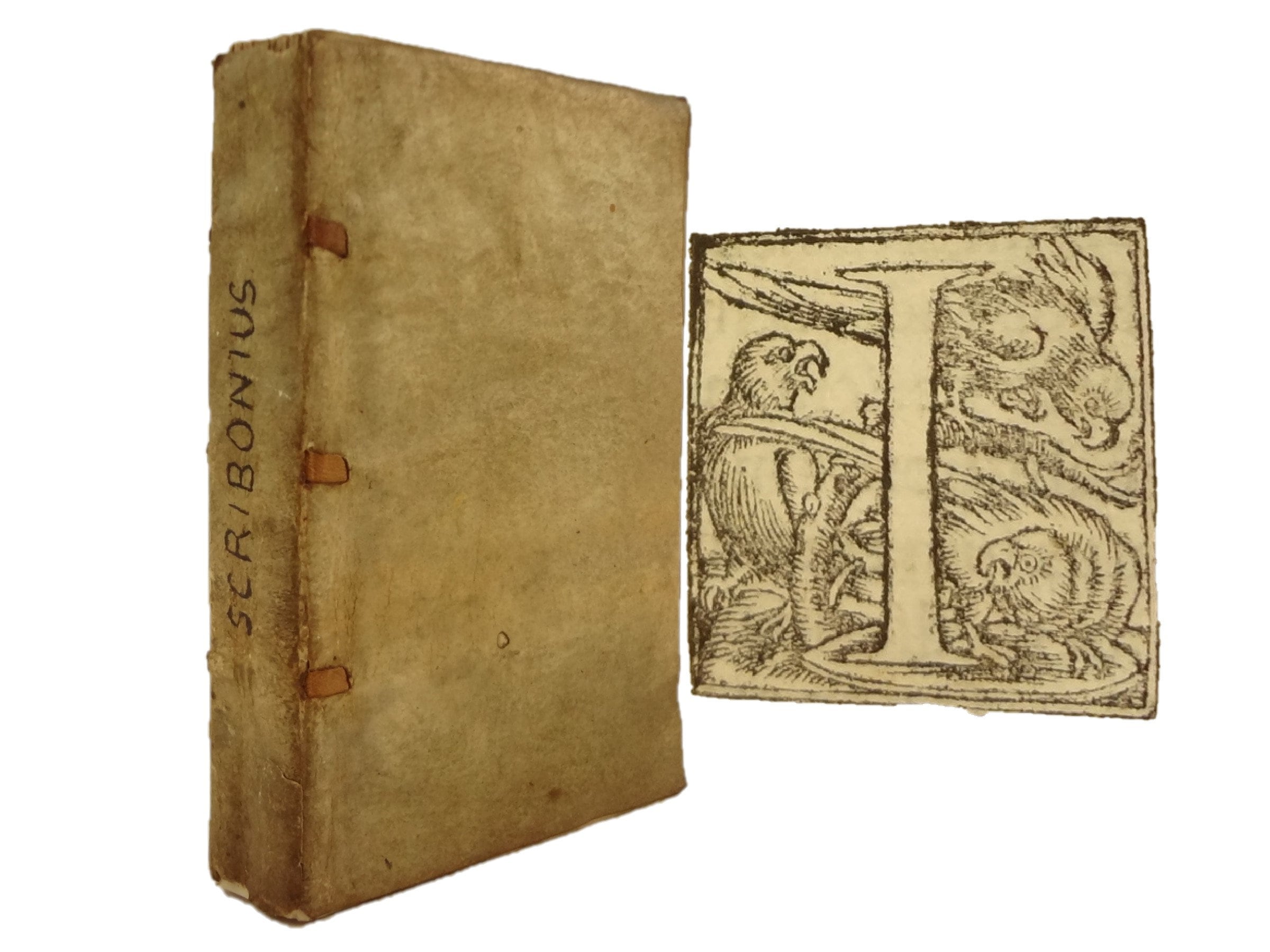 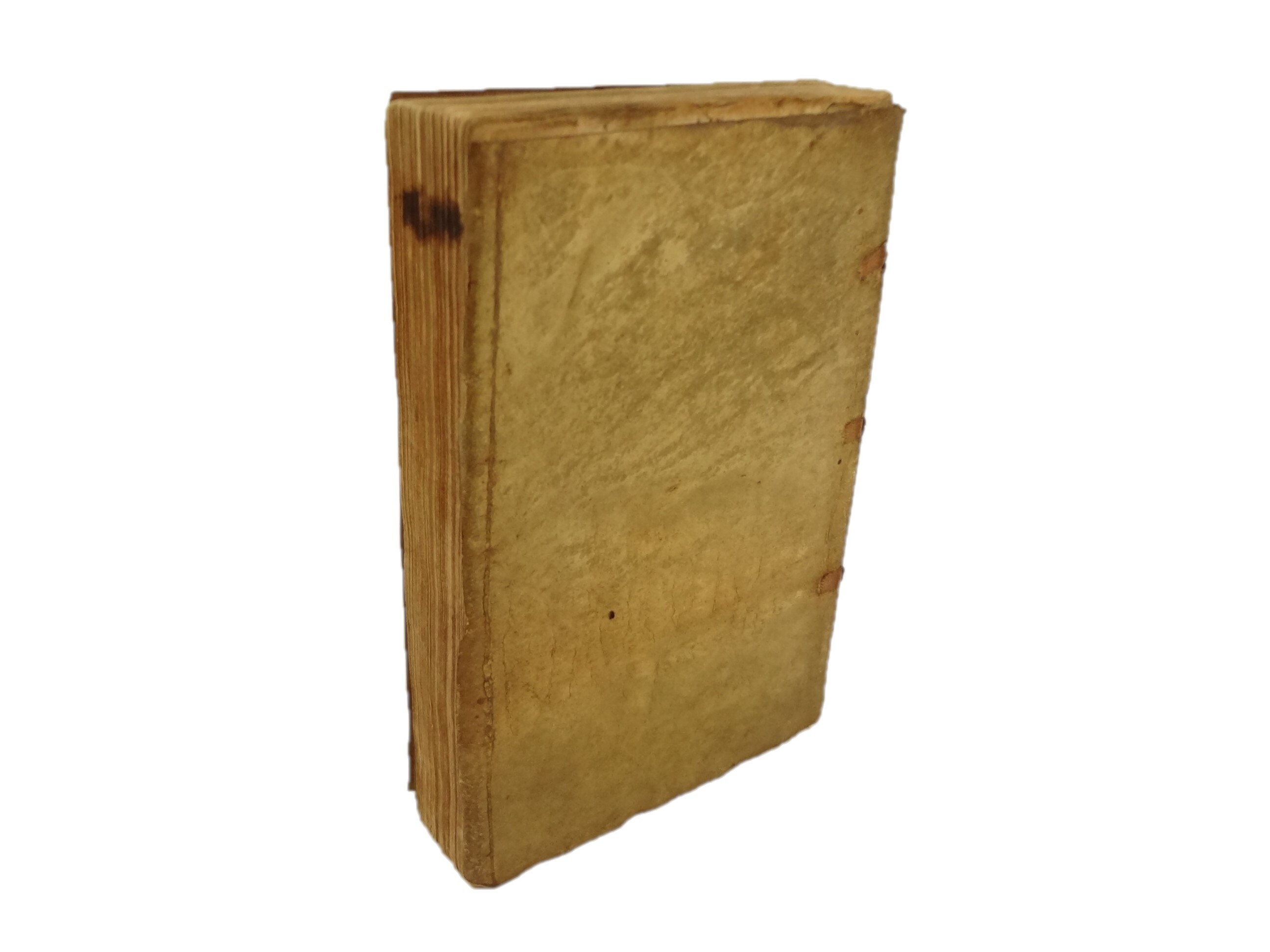 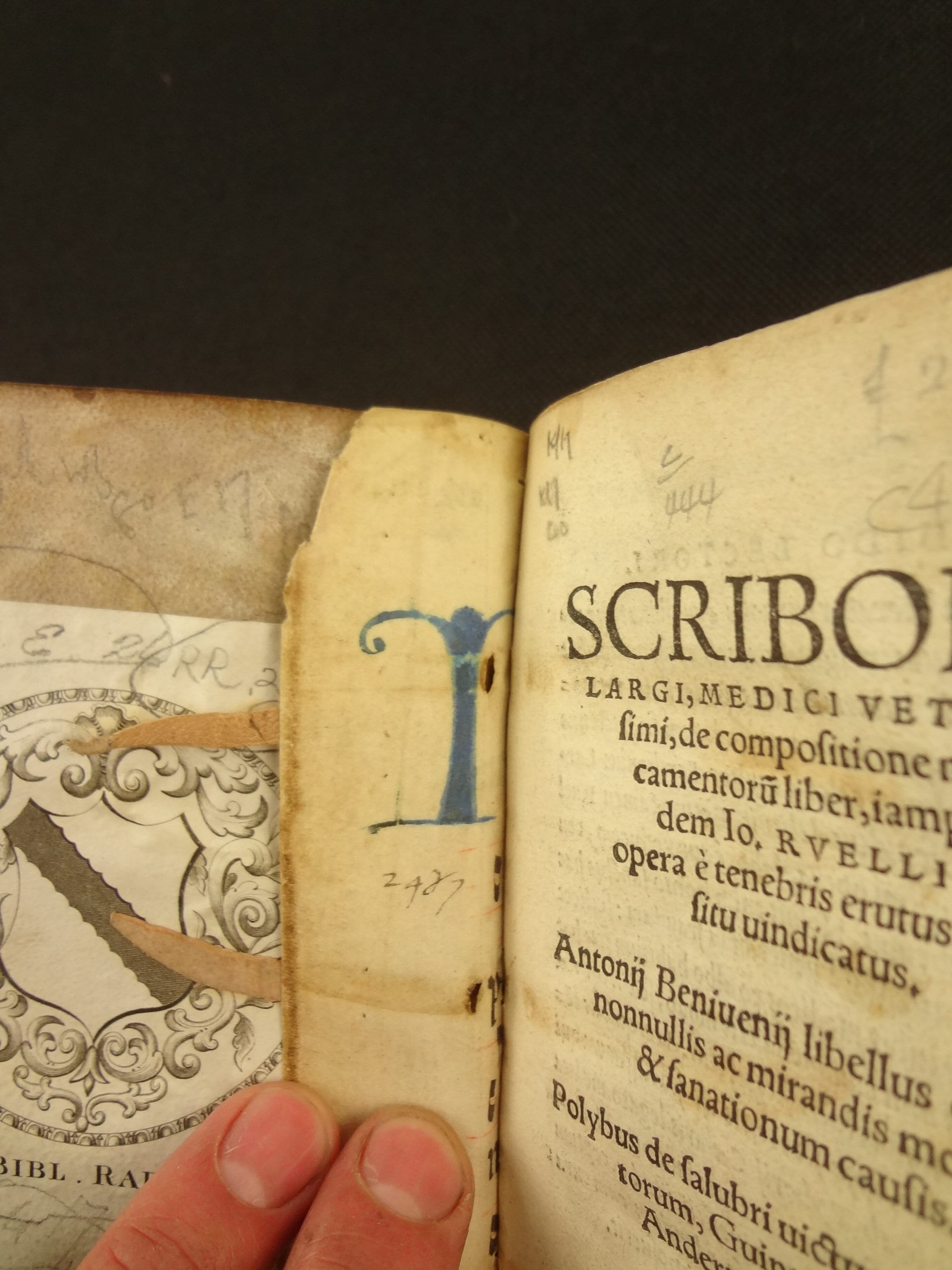 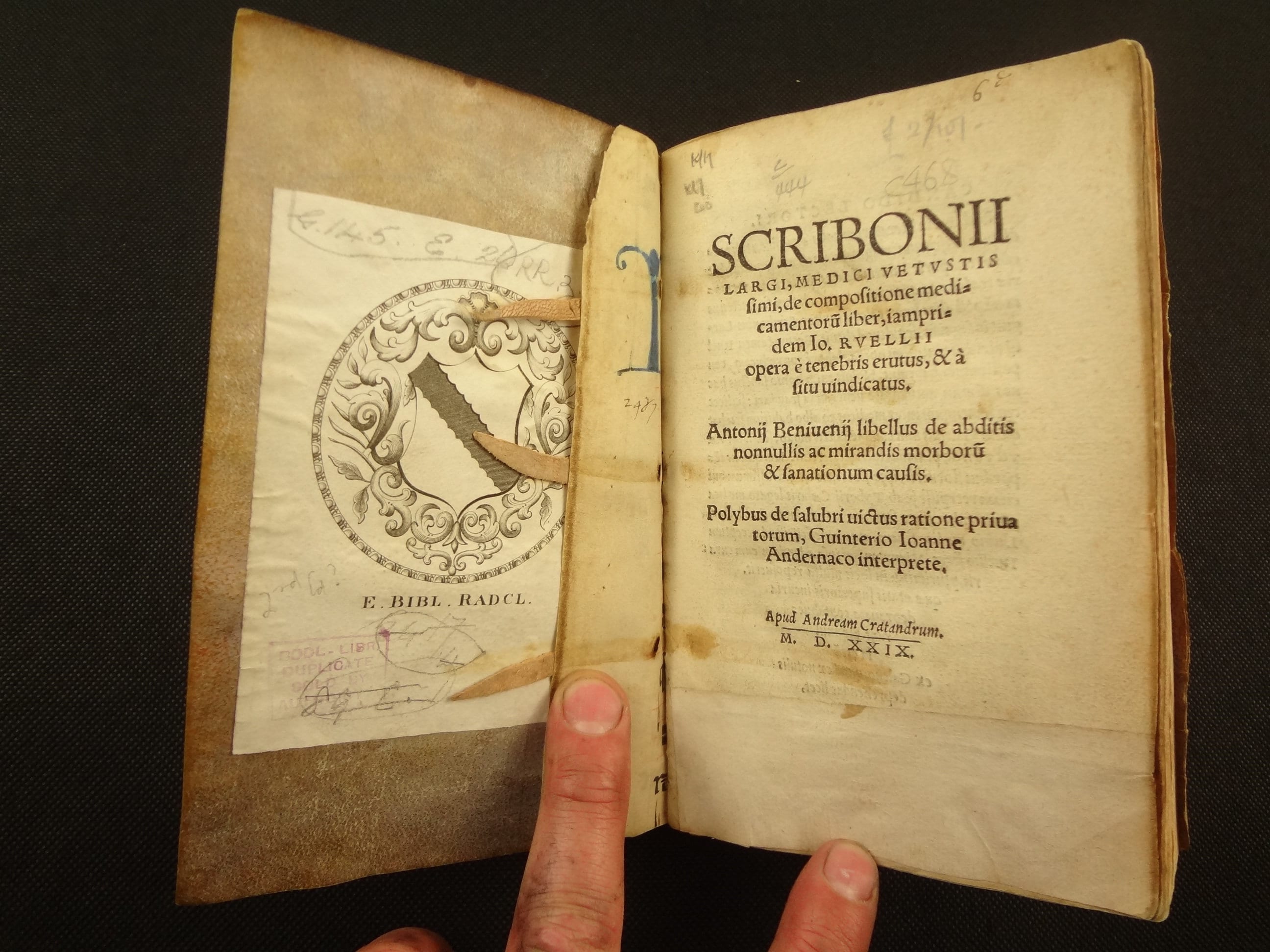 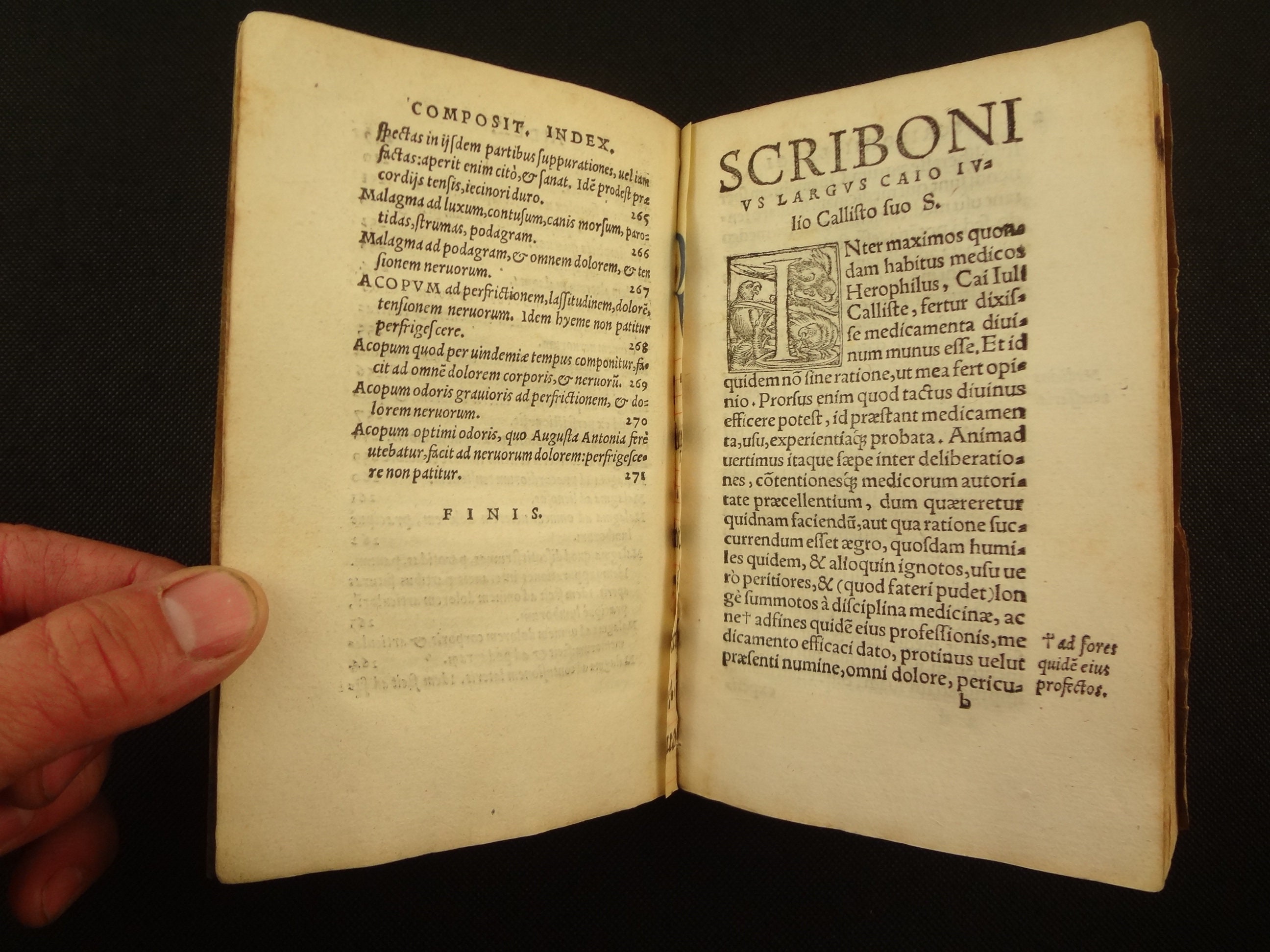 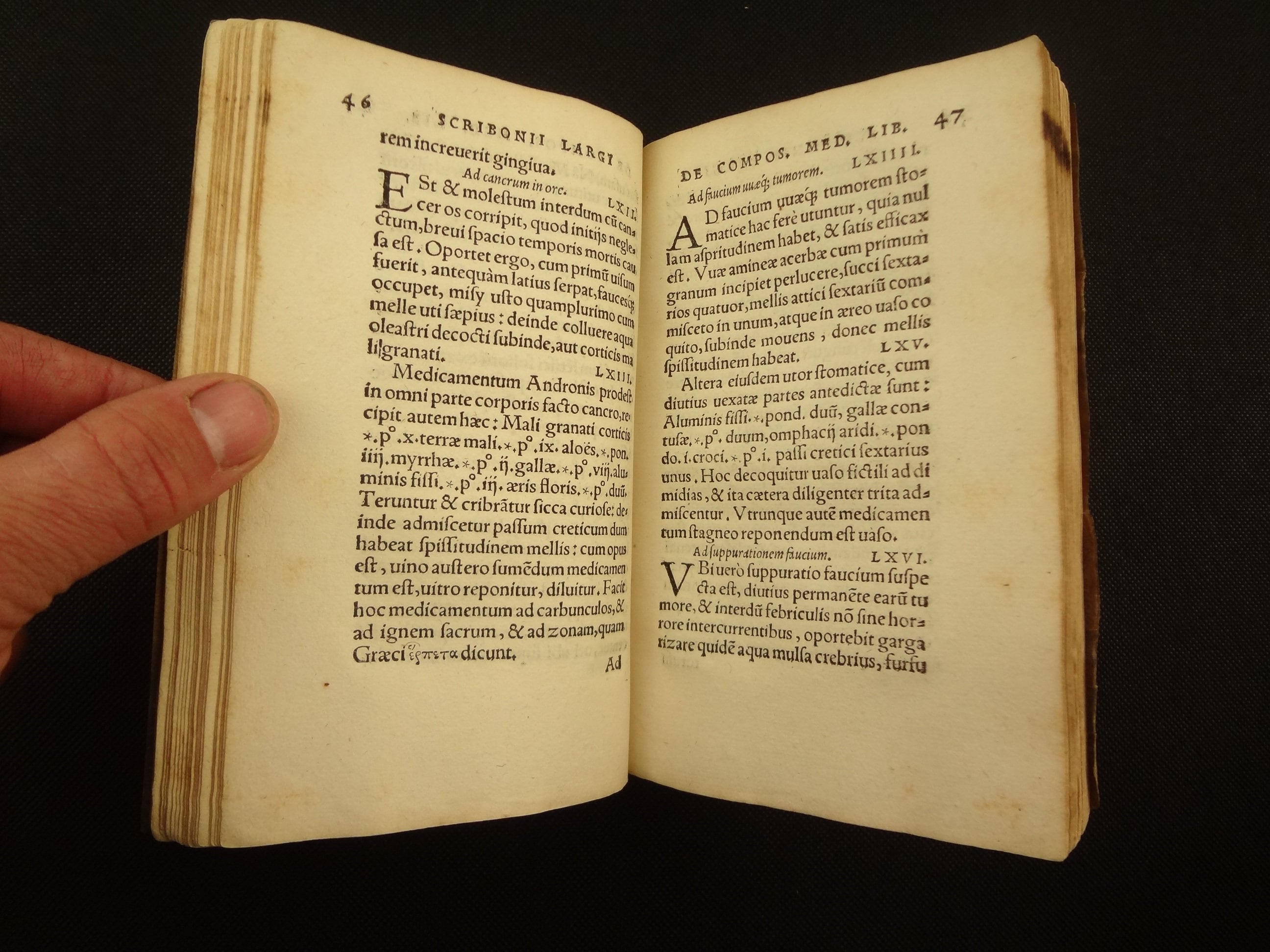 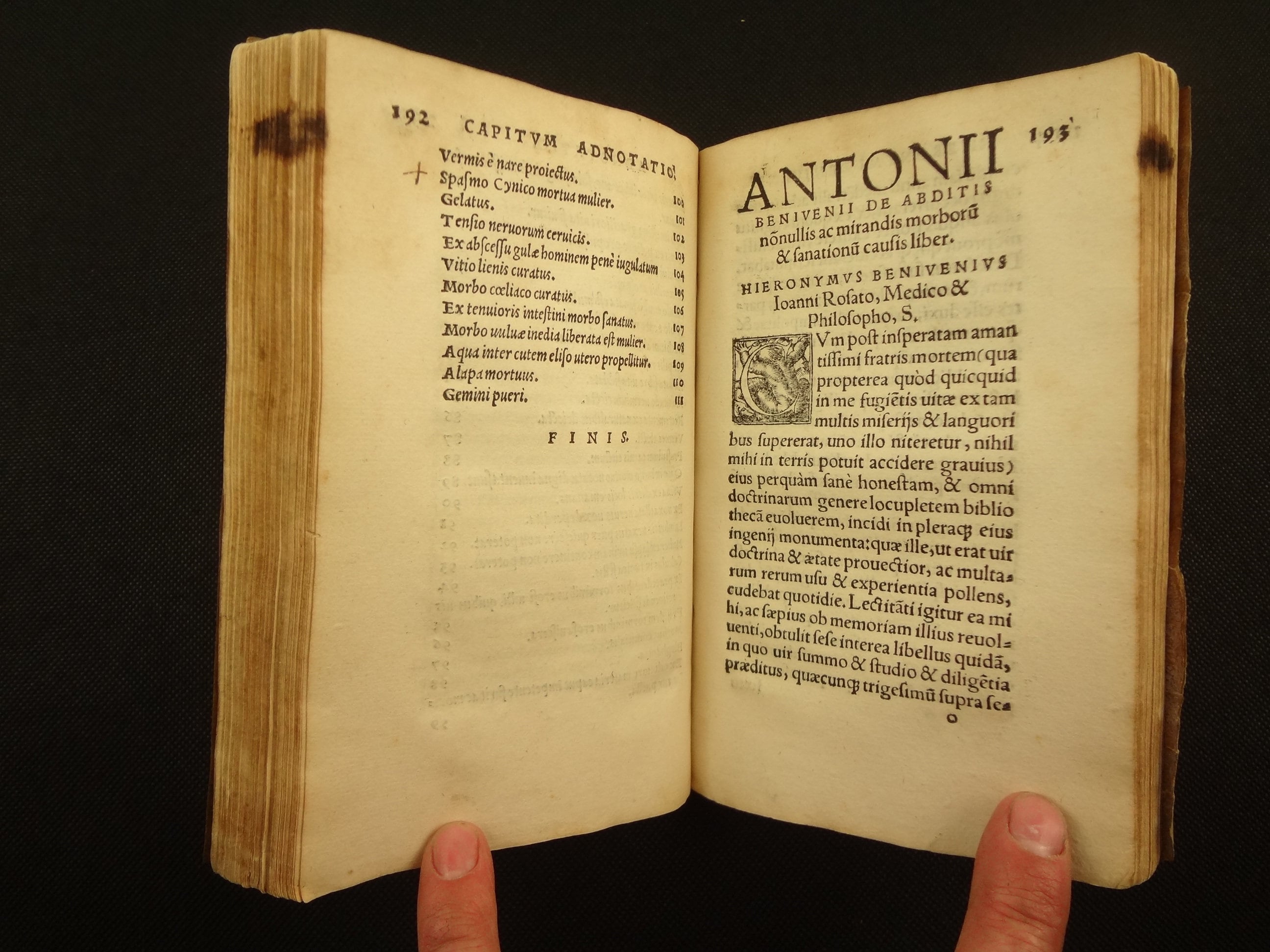 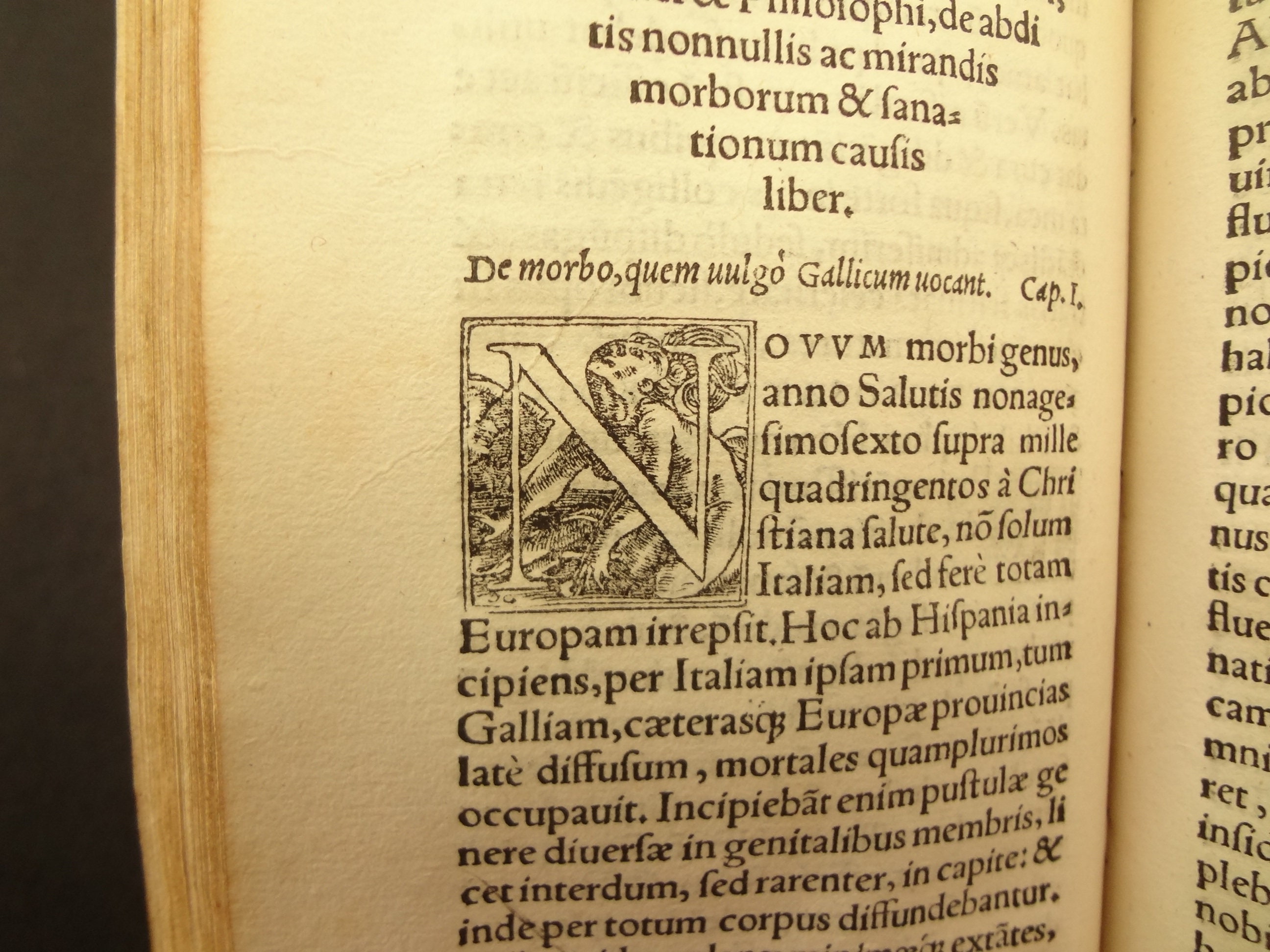 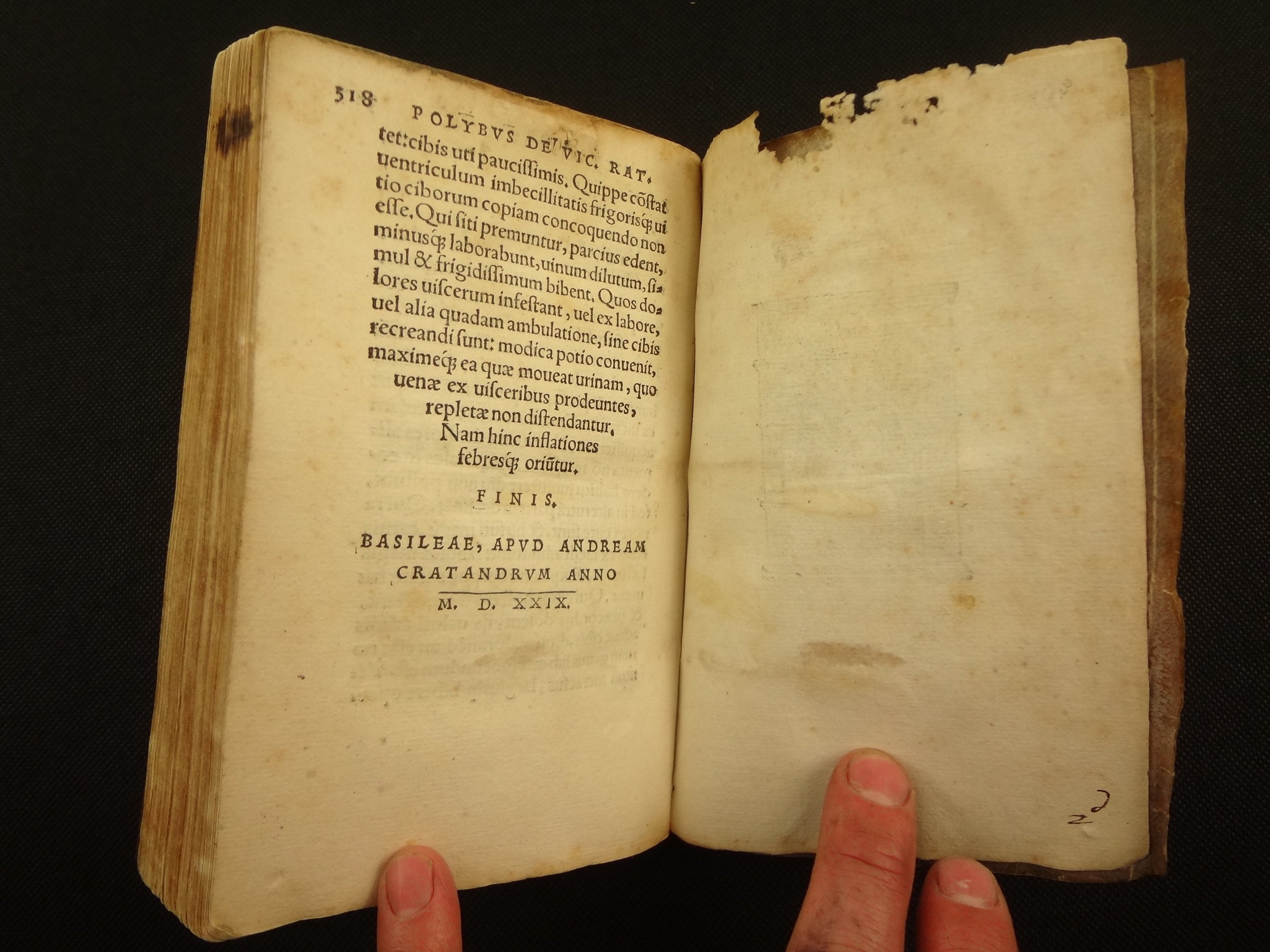 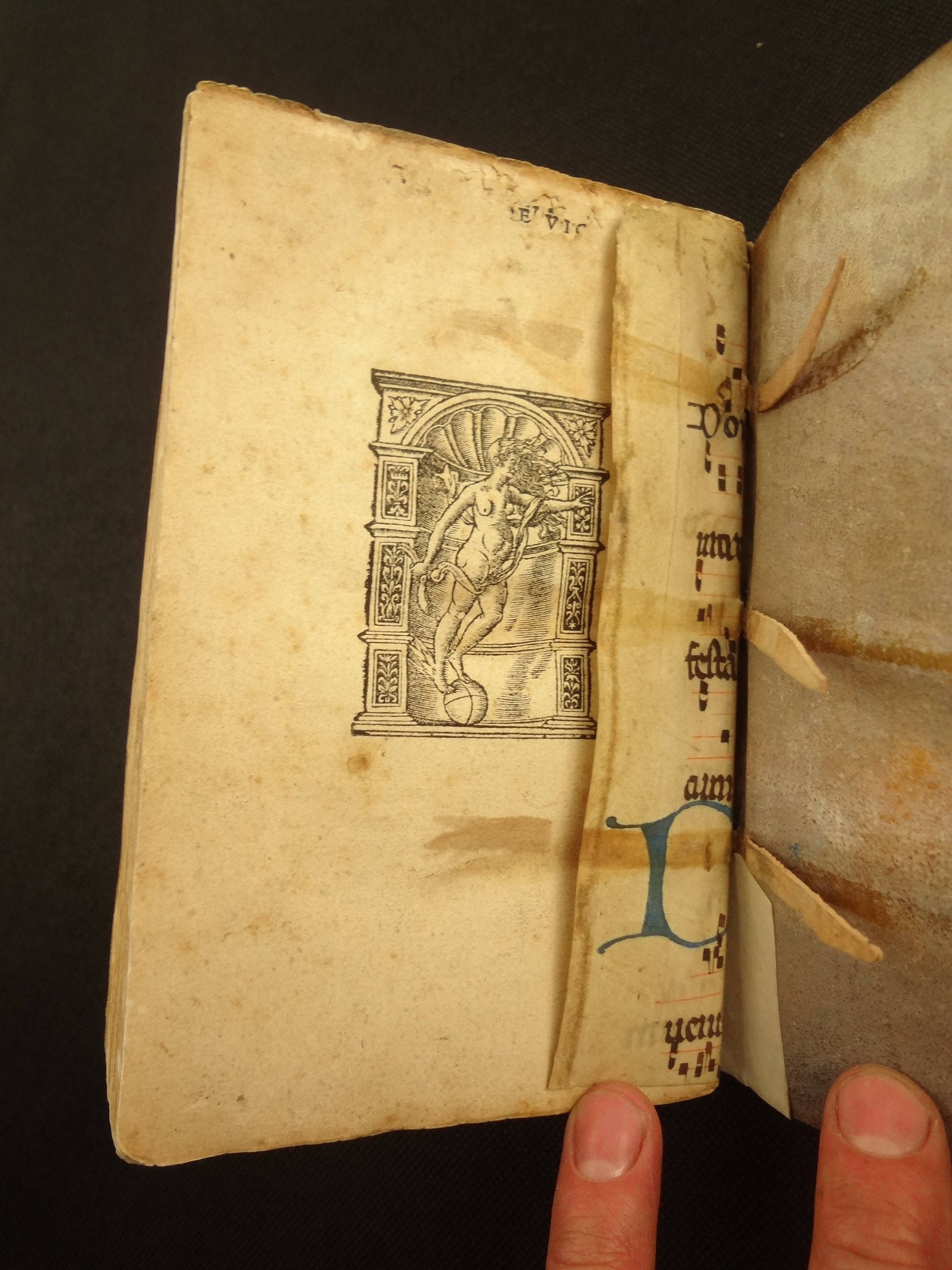 1529 printing of three important medical works, in one edition: Scribonius' De Compositione Medicamentorum (translated by Jean Reul), Antonio Benivieni's De Abditis Morborum Causis and Polybus' Salubri Victus Ratione (translated by Andernach); all well-regarded and important historical medical treatises. This copy also with interesting institutional provenance, a large ex-libris plate of the Radcliffe Library, University of Oxford, with a Bodleian Library duplicate/sold stamp. Also of note, the spine/hinges of the work work produced by using manuscript antiphonal fragments, with three larger colored initials protruding from the gutter (one "T" at the front hinge, one "R" at the mount for the first gathering, and one "D" at the rear hinge).

Produced circa 47 AD, by the Roman court physician Scribonius Largus, it is a compilation of 271 prescriptions (compositiones). It contains many traditional remedies and colloquialisms. The noted University of Paris physician Ruel here provides the translation (1st edition was in 1528). - 1911 Encyclopaedia Britannica

Antonio di Paolo Benivieni (1443–1502) was a Florentine physician who pioneered the use of the autopsy and many medical historians have considered him a founder of pathology. Benivieni published a treatise entitled De Abditis Morborum Causis ("The Hidden Causes of Disease") which is now considered one of the first works in the science of pathology. Some of the protocols developed by Benivieni are similar to those used in autopsies to this day, and he has been referred to as the "father of pathologic anatomy.”

At the rear is a short treatise, attributed to Polybus (c. 400 BC, Greek), De Salubri Victus Ratione, which is included in the Hippocratic collection. This translation was executed by the noted Renaissance physician Johann Winter von Andernach.

See pictures. Worn vellum binding,with wear and chipping at the edges, soiling to the boards. Perhaps a Yapp-like edge has come off the fore-edge of the front board since there is one on the rear. Ties are not cracked. Manuscript name on fore-edge of text block has been blotted out. Ex-libris of Radcliffe library, with duplicate/sold stamp on verso of front board. Many librarian bookseller notes on front board and title page. Hinges consist of antiphonal manuscript, and have lifted exposing both sides. Spine ties have ghosted title page.