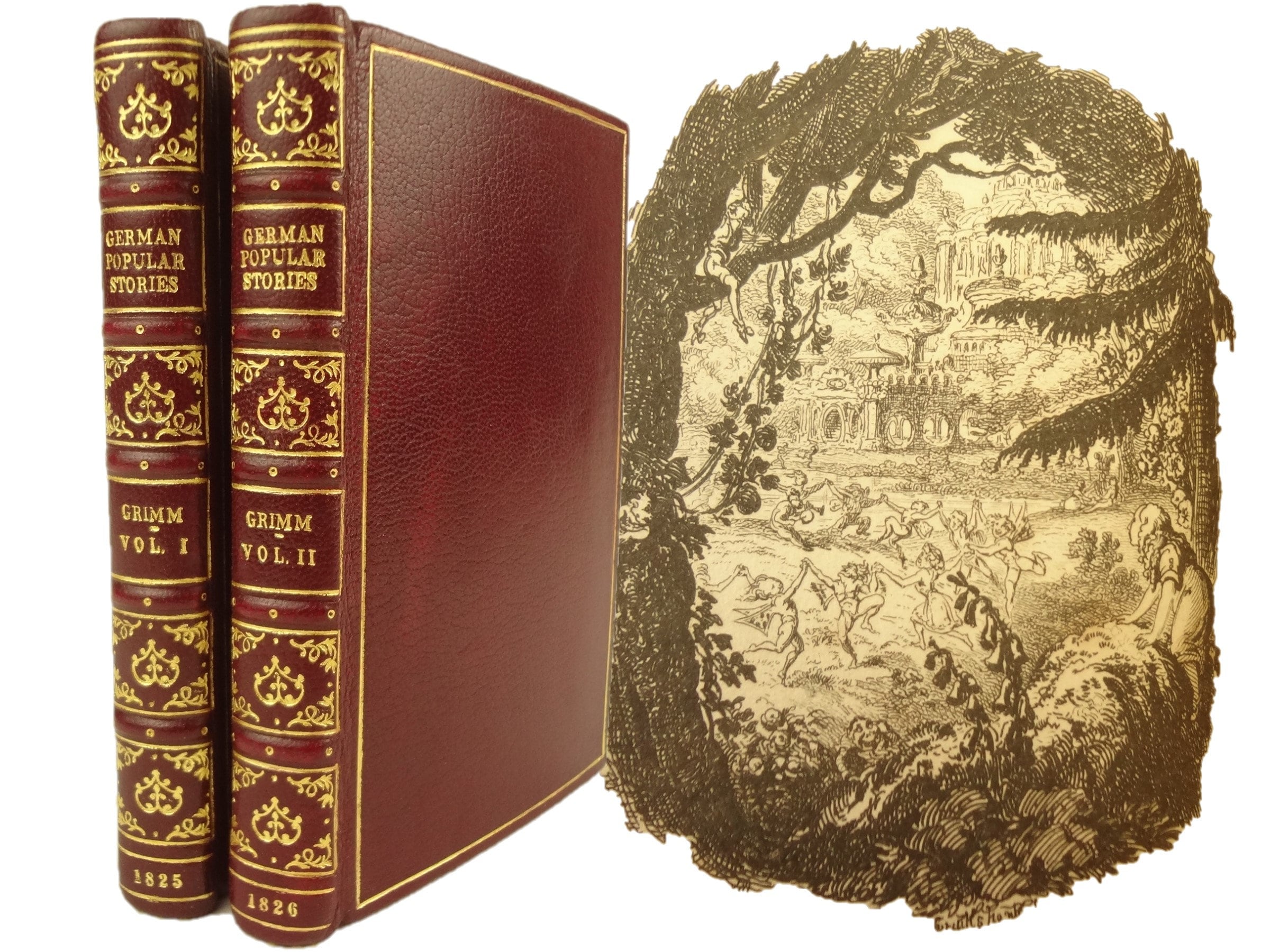 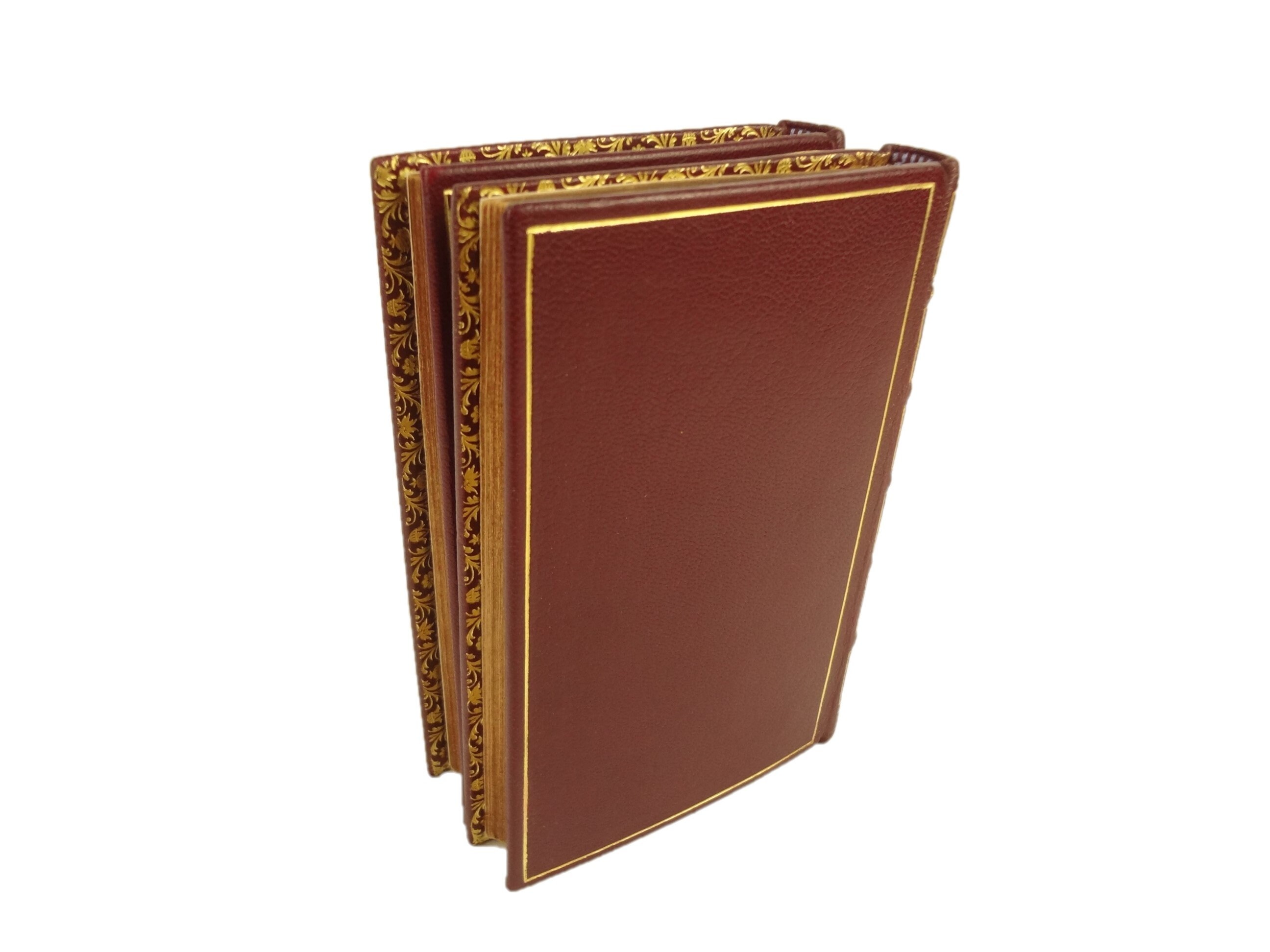 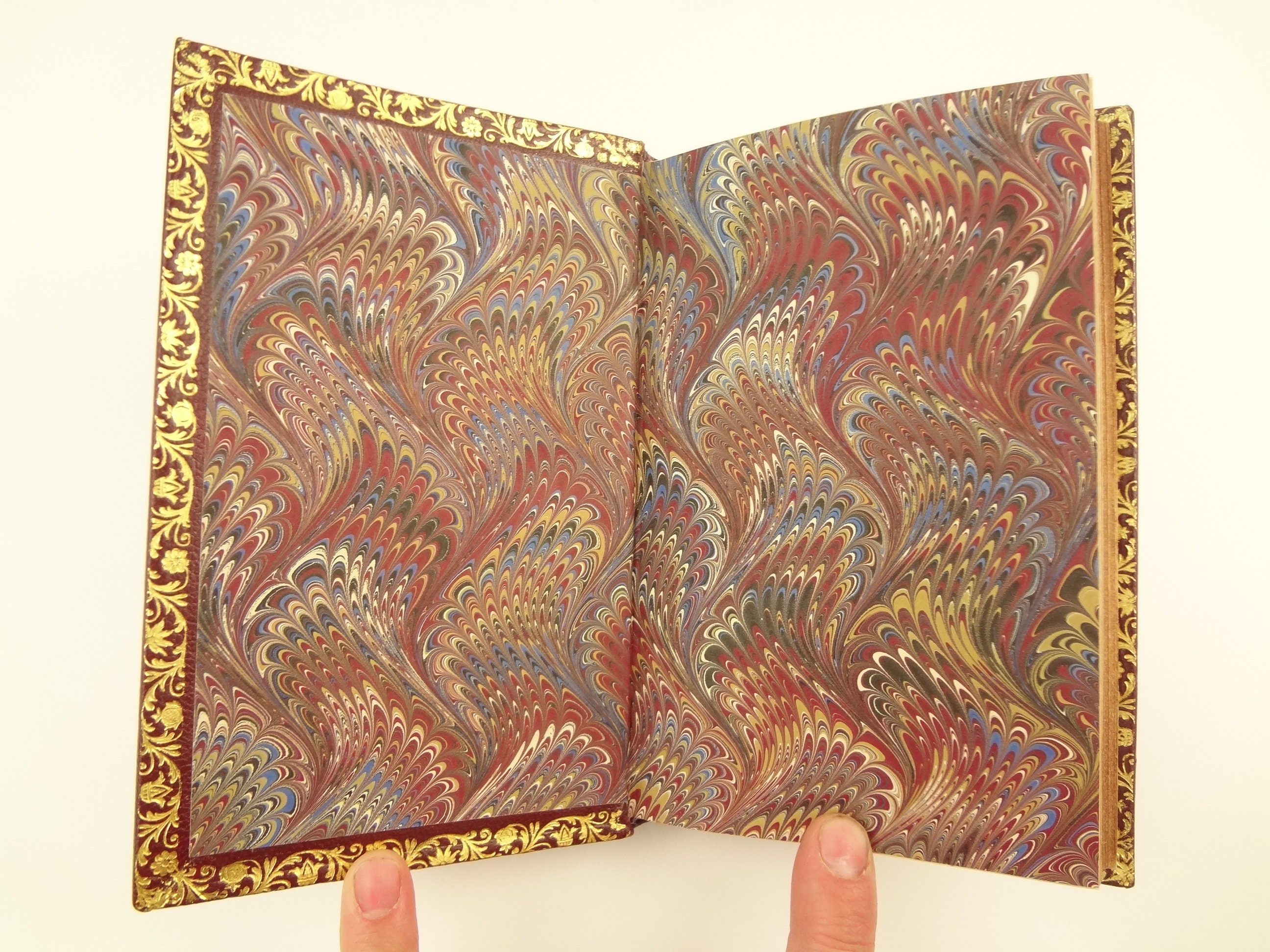 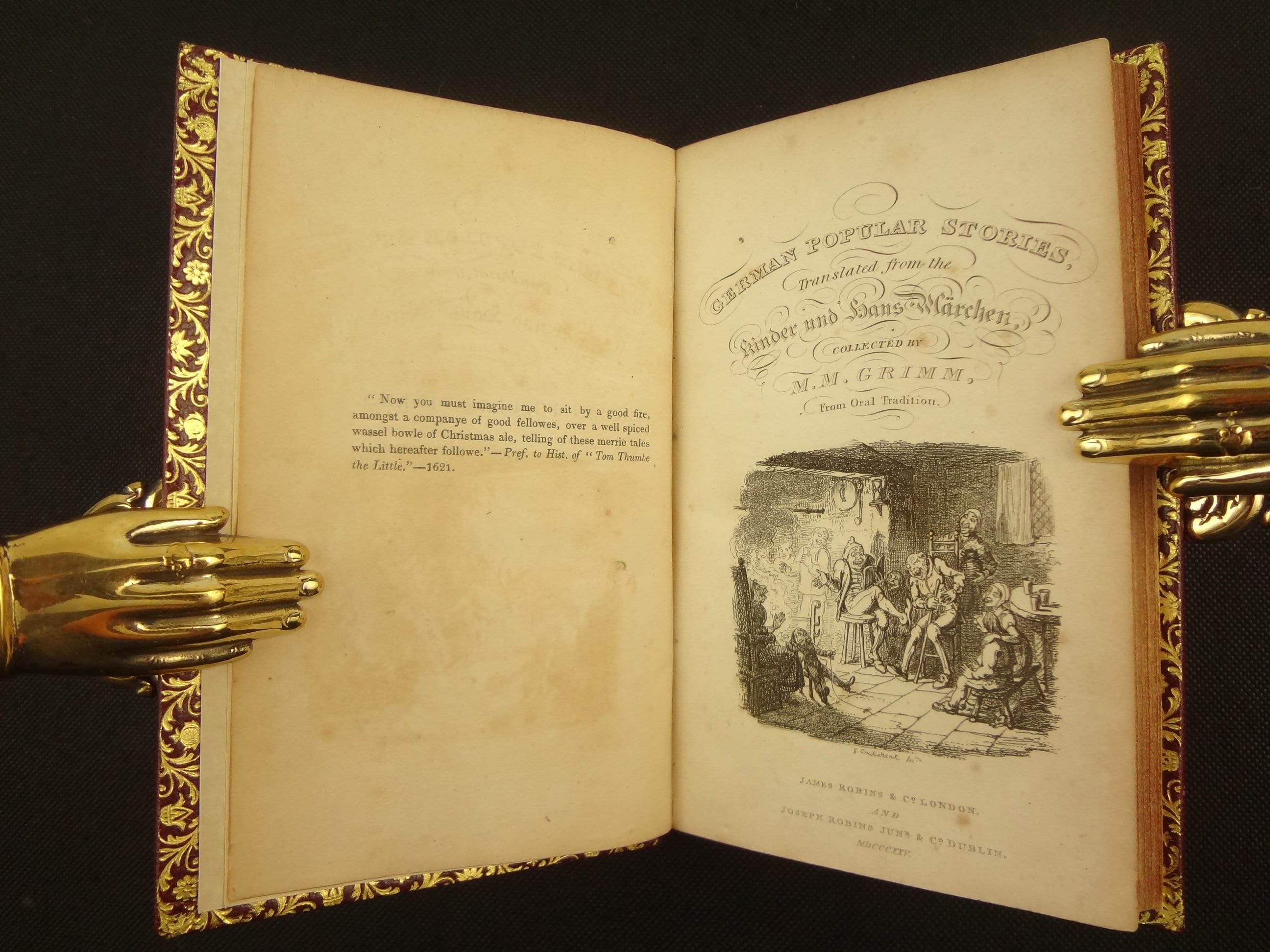 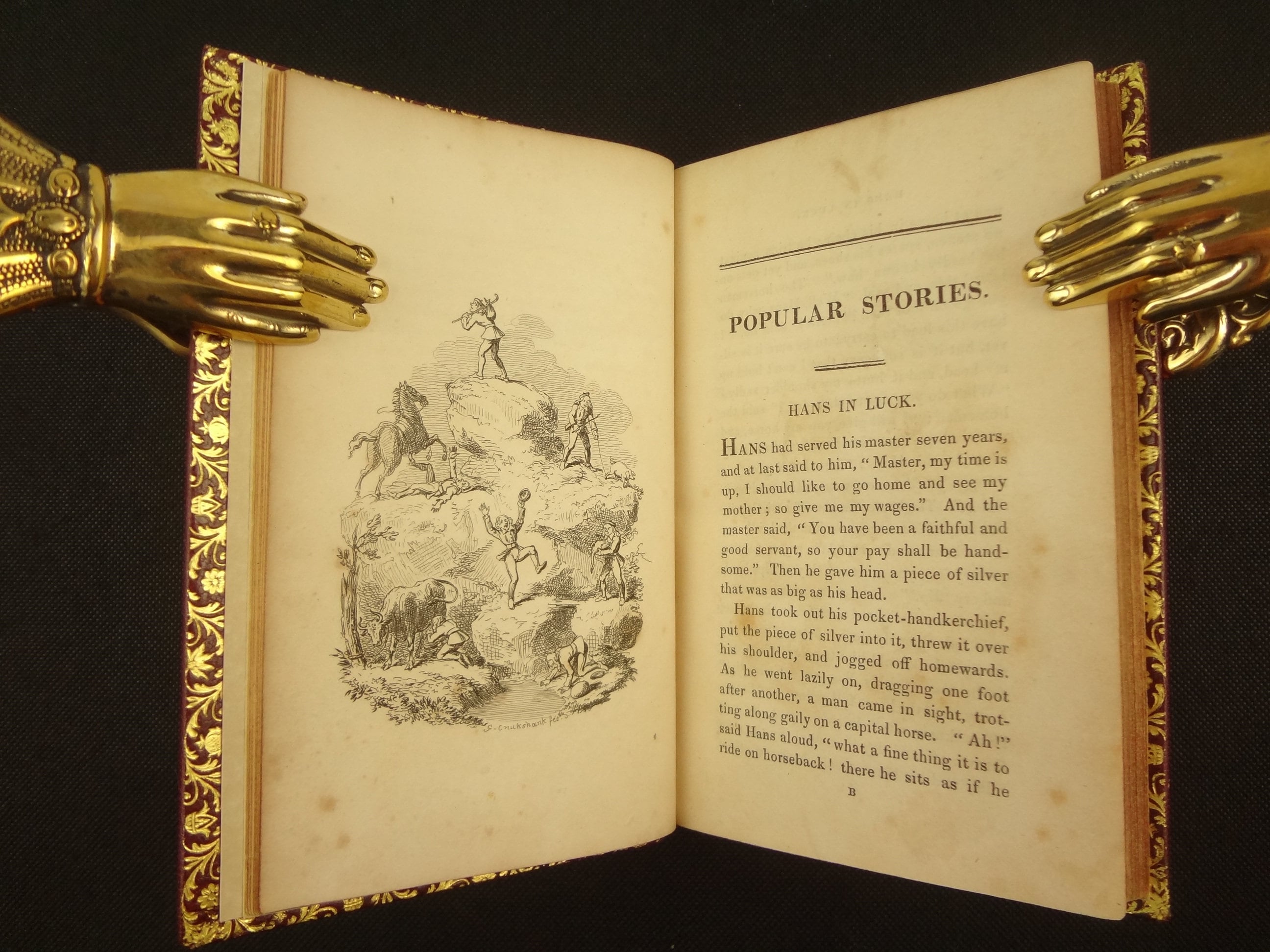 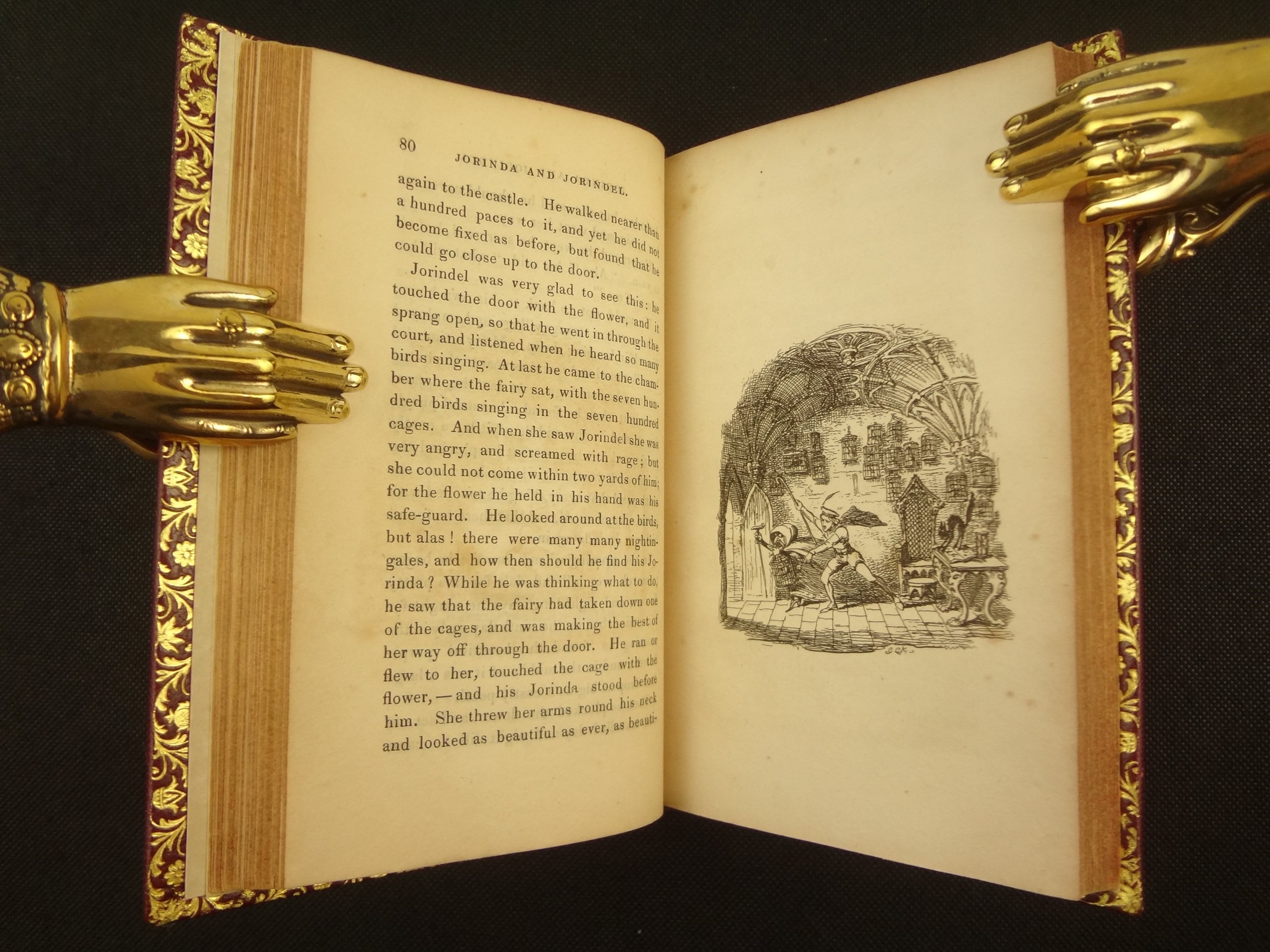 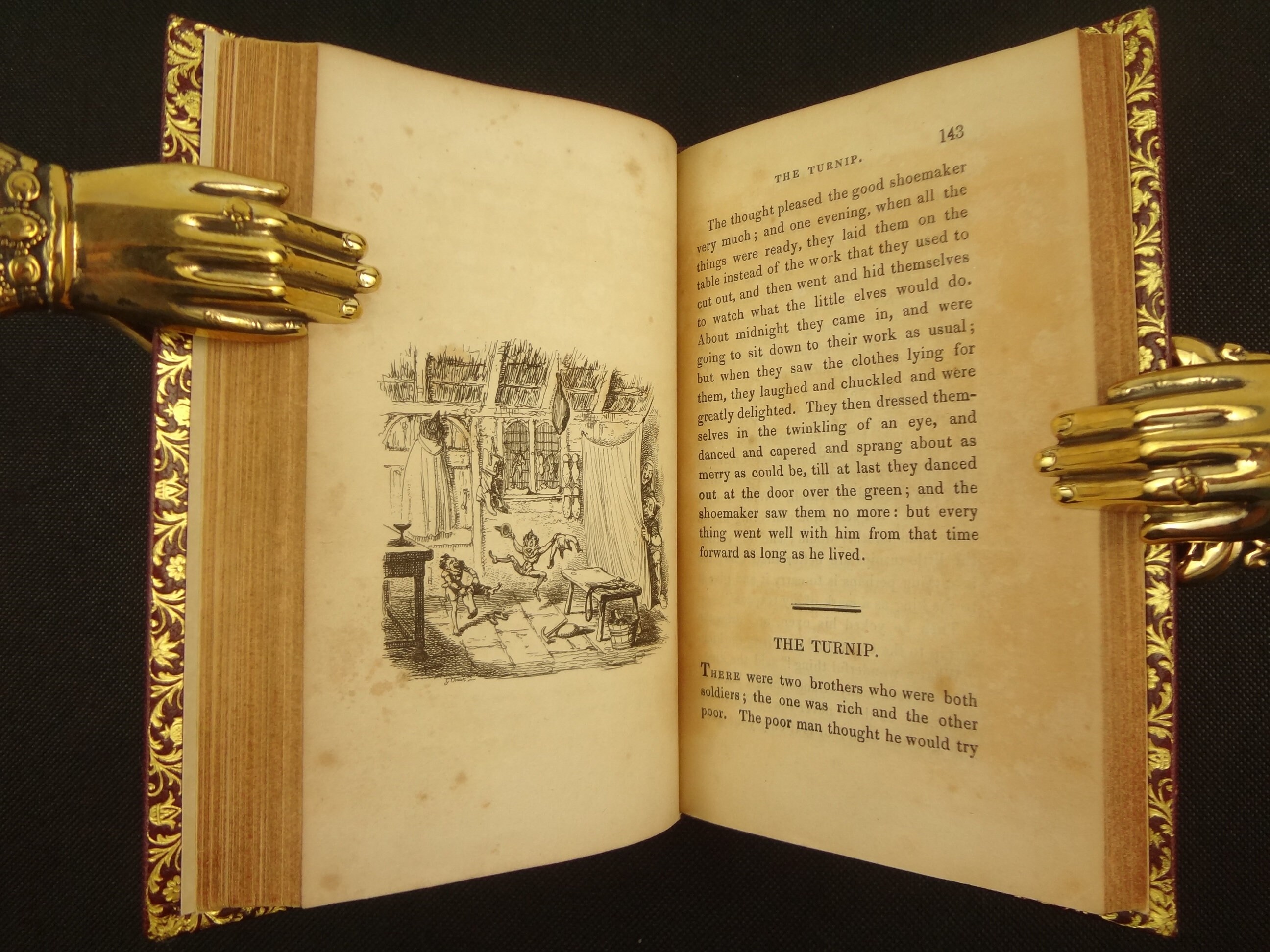 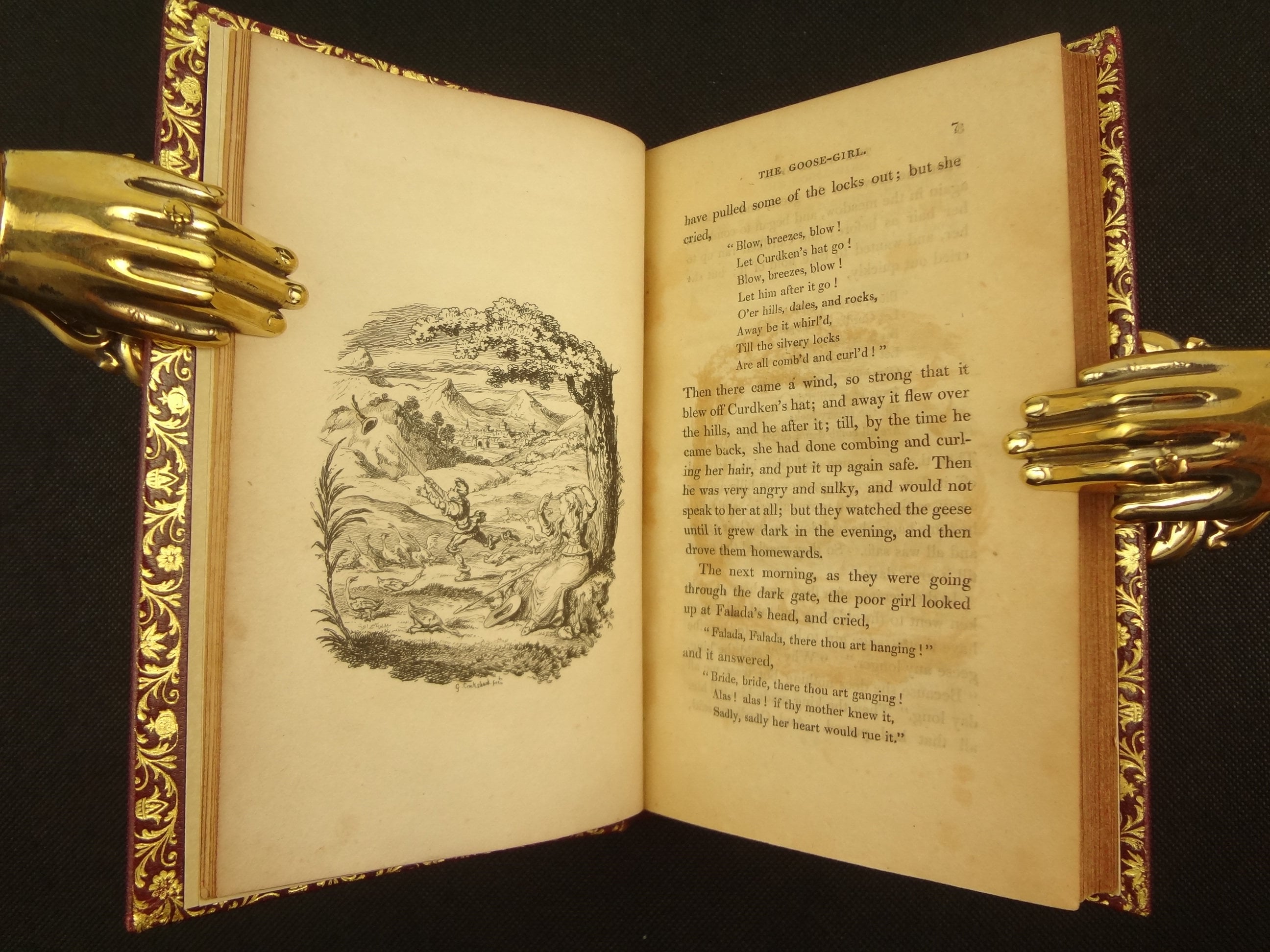 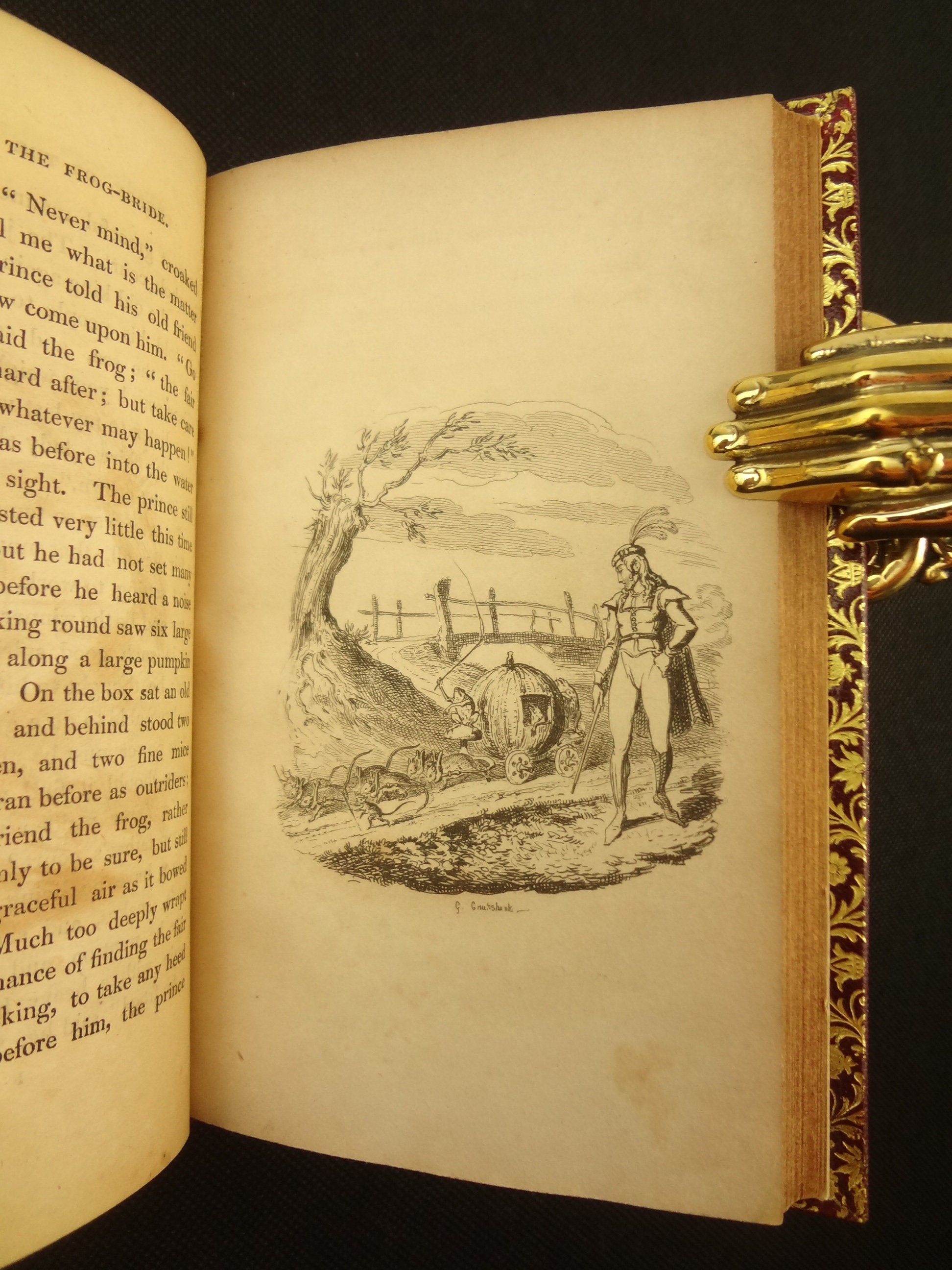 Very early states (volume two is a first edition) of the first English printing of the works of the brothers Grimm. Volume one is a fourth edition, printed in 1825, from the same plates as the first edition of 1823. With the exciting illustrations of George Cruikshank that helped this work gain great popularity. Bound wonderfully, as a matching set. These volumes are missing the advertisements added by the publisher, but have the rare half-title pages.

"If you ever happen to meet with the two volumes of 'Grimm's German Stories,' which were illustrated by (Cruikshank) long ago, pounce upon them instantly; the etchings in them are the finest things, next to Rembrandt's, that, as far as I know, have been done since etching was invented. You cannot look at them too much, nor copy them too often." John Ruskin, Elements of Drawing

"German Popular Stories" was published by C. Baldwyn in 1823, and the second volume by James Robins in 1826, both with illustrations by the translator's friend, George Cruikshank. These illustrations, in the simple directness and effectiveness of their execution, and in their fertile and unencumbered fancy, rank as the artist's masterpieces. These volumes have become exceedingly scarce and have in late years commanded as high a price as (65 pounds)." - The Publisher's Weekly, April 2, 1898

"Working with the 1819 edition of the German language Grimm’s Fairy Tales, Edgar Taylor took many liberties as a translator, combining stories, Anglicizing names and titles, eliminating some religious references, downplaying violence and bloody detail, rendering threatening figures comical, and so on. Such choices have generated nearly 200 years of unfavorable critique (at least from many scholars), and Taylor has become a relatively obscure figure in fairy-tale studies today. Nevertheless, the 1823 edition of German Popular Stories, Translated from the Kinder und Haus Marchen Collected by M.M. Grimm, from Oral Tradition, illustrated by George Cruikshank and published by Charles Baldwyn, was an immensely popular and influential book. It was reprinted in 1824 and 1825, followed by a second volume in 1826 and a revised edition in 1837 (shortly before Taylor’s death)." - Jennifer Schacker, Wayne State University Press, v28, n2, p394-5

About the Grimm Work -

The brothers were born in the town of Hanau in Hesse-Cassel (now Germany) and spent most of their childhood in the nearby town of Steinau. Their father's death in 1796 impoverished the family and affected the brothers for many years after. They attended the University of Marburg where they began a lifelong dedication to research the early history of German language and literature, including German folktales. The rise of Romanticism during the 18th century had revived interest in traditional folk stories, which to the Grimms and their colleagues represented a pure form of national literature and culture. The Brothers Grimm established a methodology for collecting and recording folk stories that became the basis for folklore studies. In addition to collecting and editing folk tales, the brothers compiled German legends. The best-known tales include “Hansel and Gretel,” “Snow White,” “Little Red Riding Hood,” “Sleeping Beauty,” “Tom Thumb,” “Rapunzel,” “The Golden Goose,” and “Rumpelstiltskin”. - Wikipedia

Collation V2 - Half-title leaf, Title page leaf, B1-K12, M9 (where M8 is the last numbered page, 256, and M9 is the translator's note/printer's mark), It's likely M10 to M12 were advertisements, but the WorldCat bibliographic entries aren't concise enough, and I can't find a detailed collation elsewhere.

The leaves (half-title, title, advertisement) noted above do not have signatures printed on them.

See pictures. Fresh bindings, no condition notes to report. Some toning, fox spots, occasional thumb and dog-eared page, etc. throughout, as is common to 19th century paper. V1 - half title page with 1 cm hole. "2 vols" and a signature written in graphite on back of title page. Upper corner of 61 and 63 missing, marginal damage only. Bottom corner of 73 missing, marginal damage only. V2 - A little more toning at ends. Ghosting at plates to facing pages, with toning. Tiny marginal candle ember hole on 21. p63 1 cm hole in fore-edge margin. Light ink stain on 102-103. Either deckled edge of slight fore-edge damage to 115. Very distinctive finger marks/foxed from 150-170. Corner of 189 and missing, marginal only, just at corner. No advertisements.