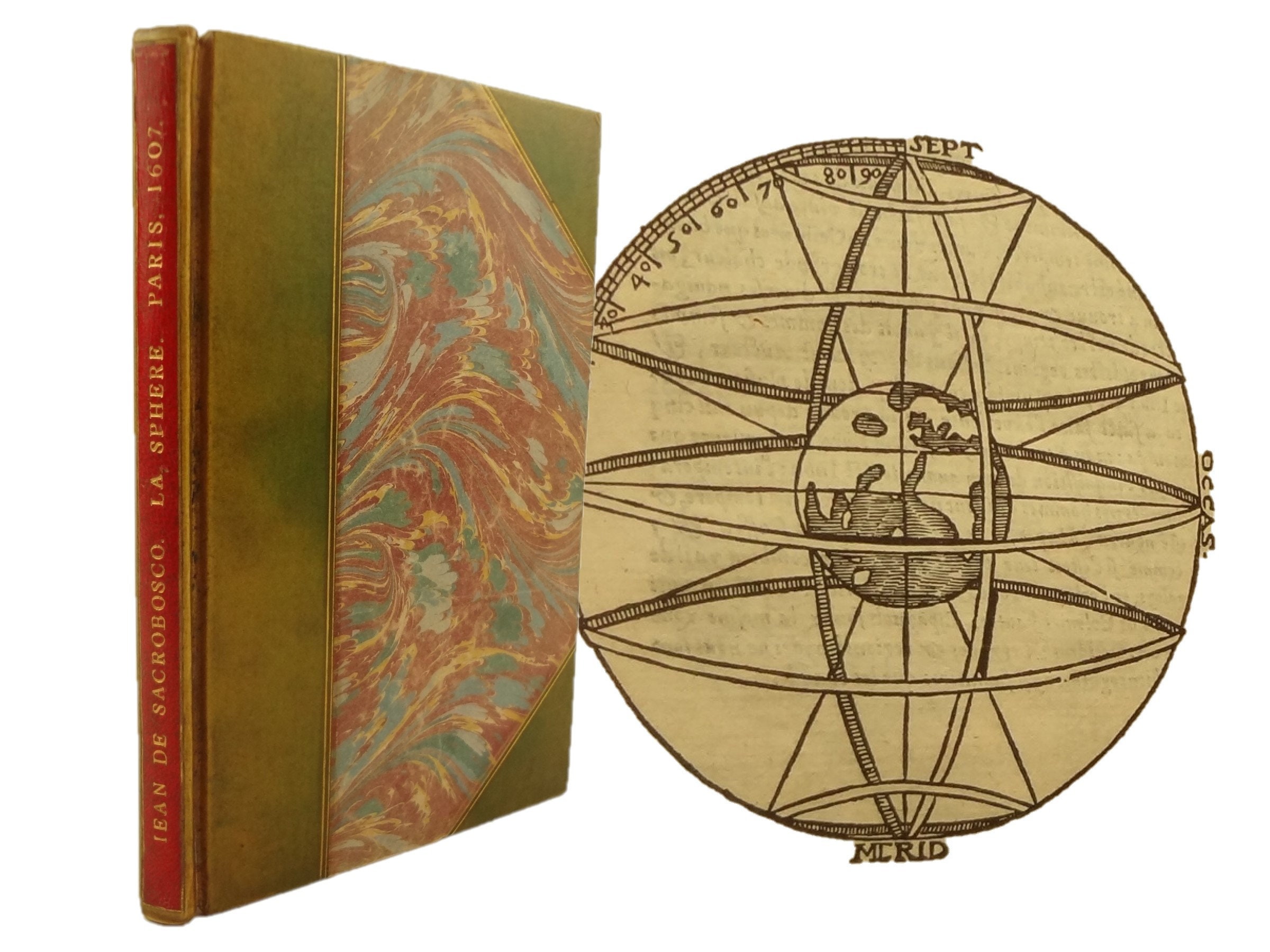 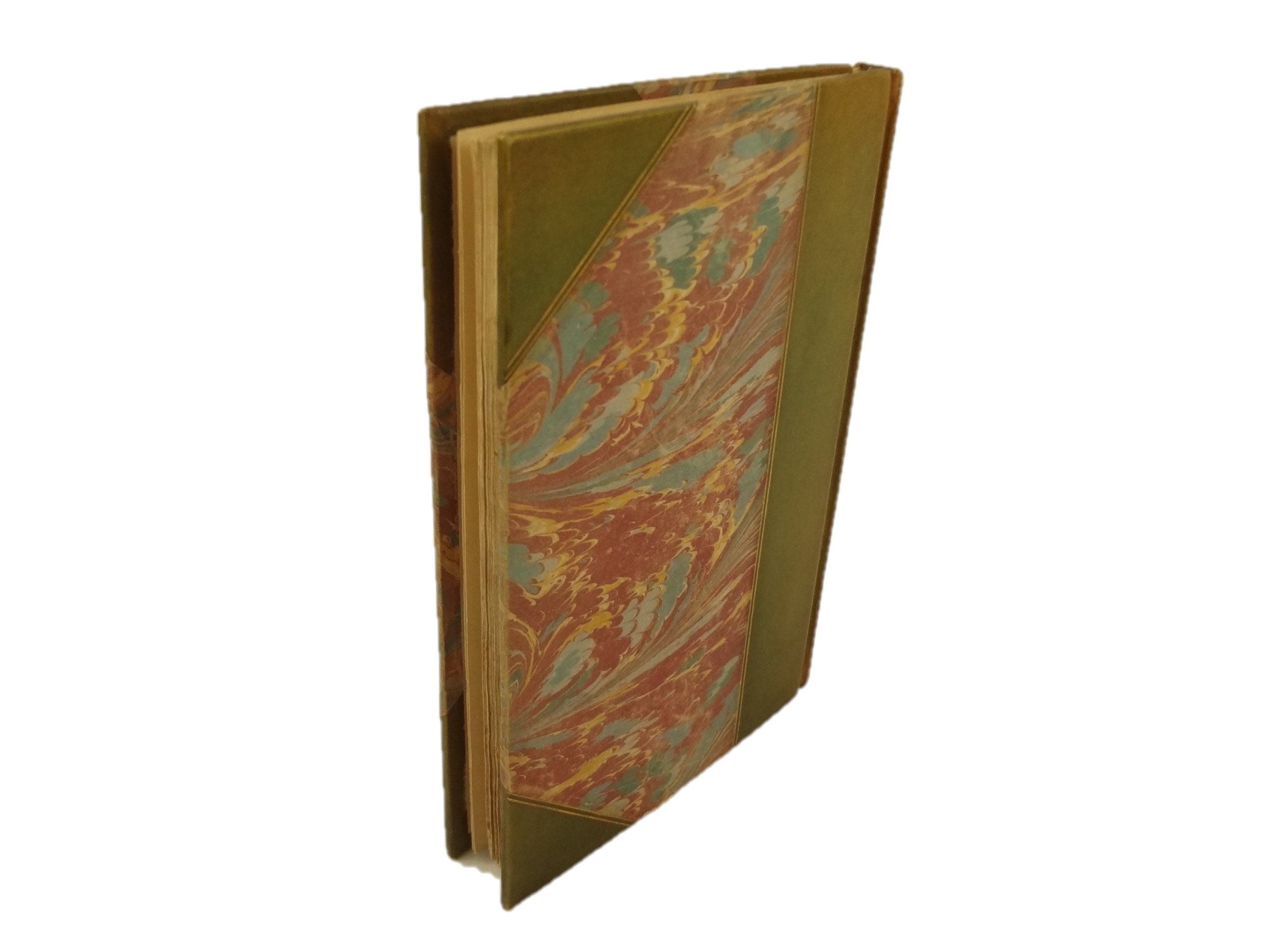 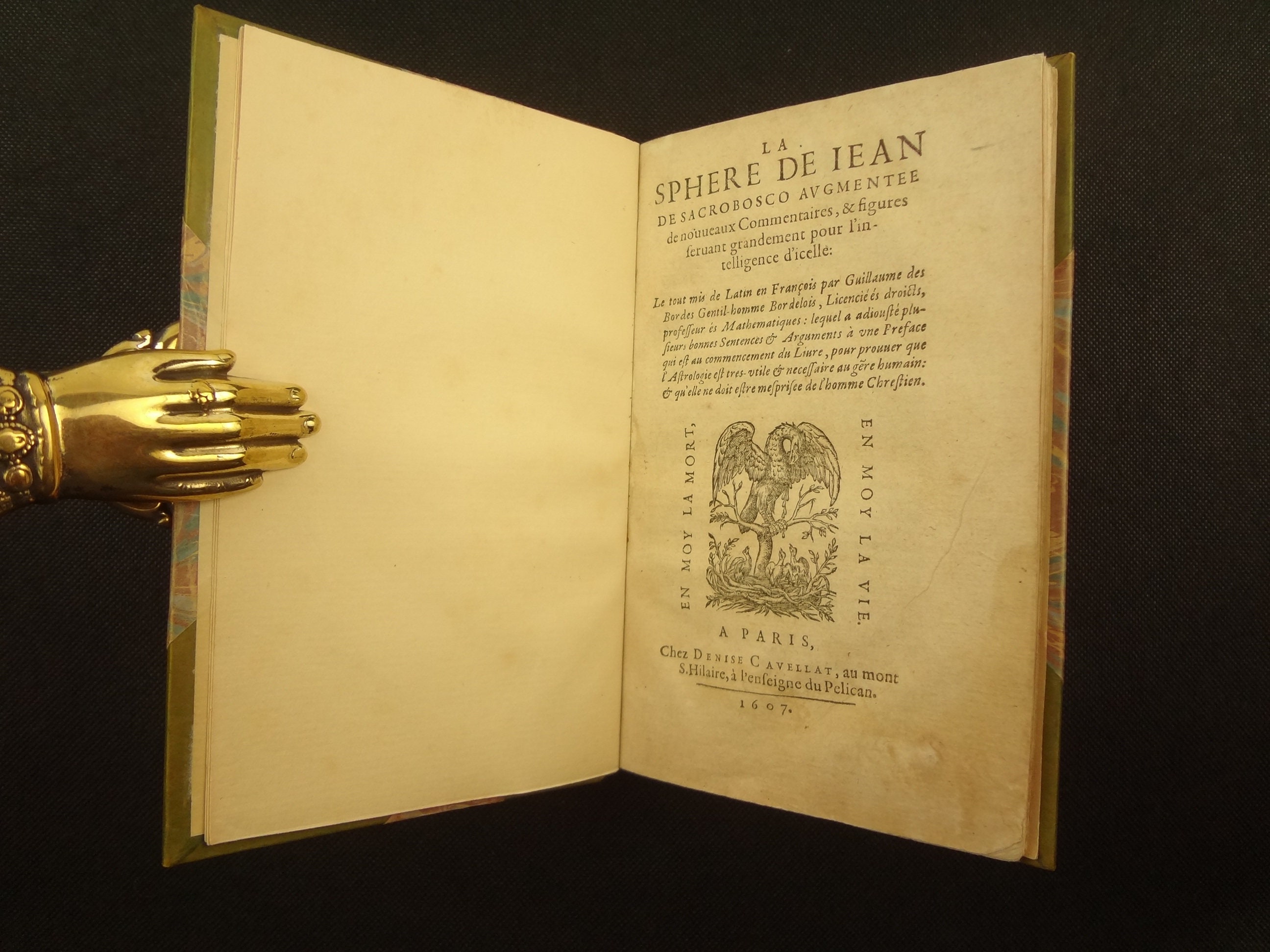 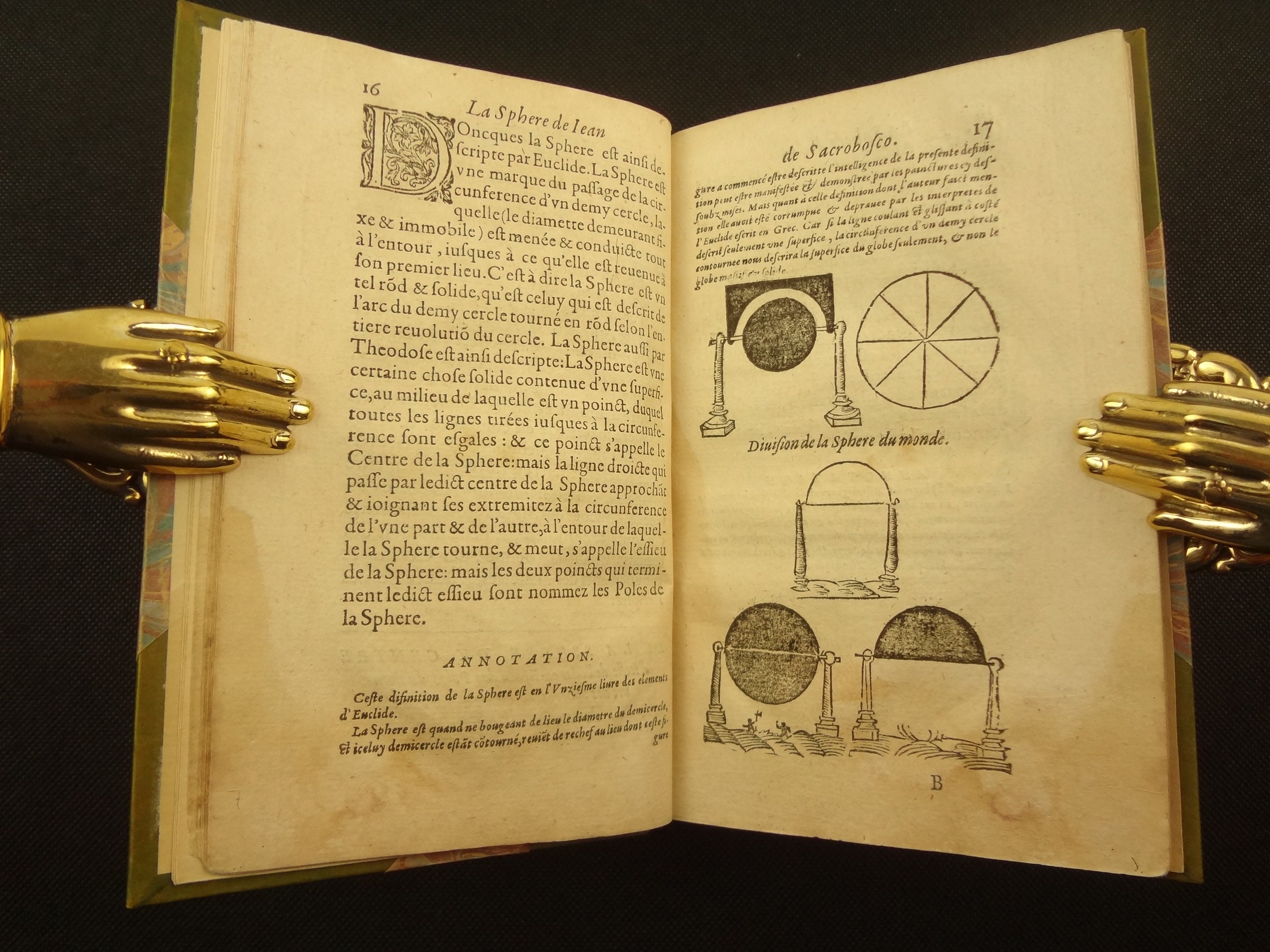 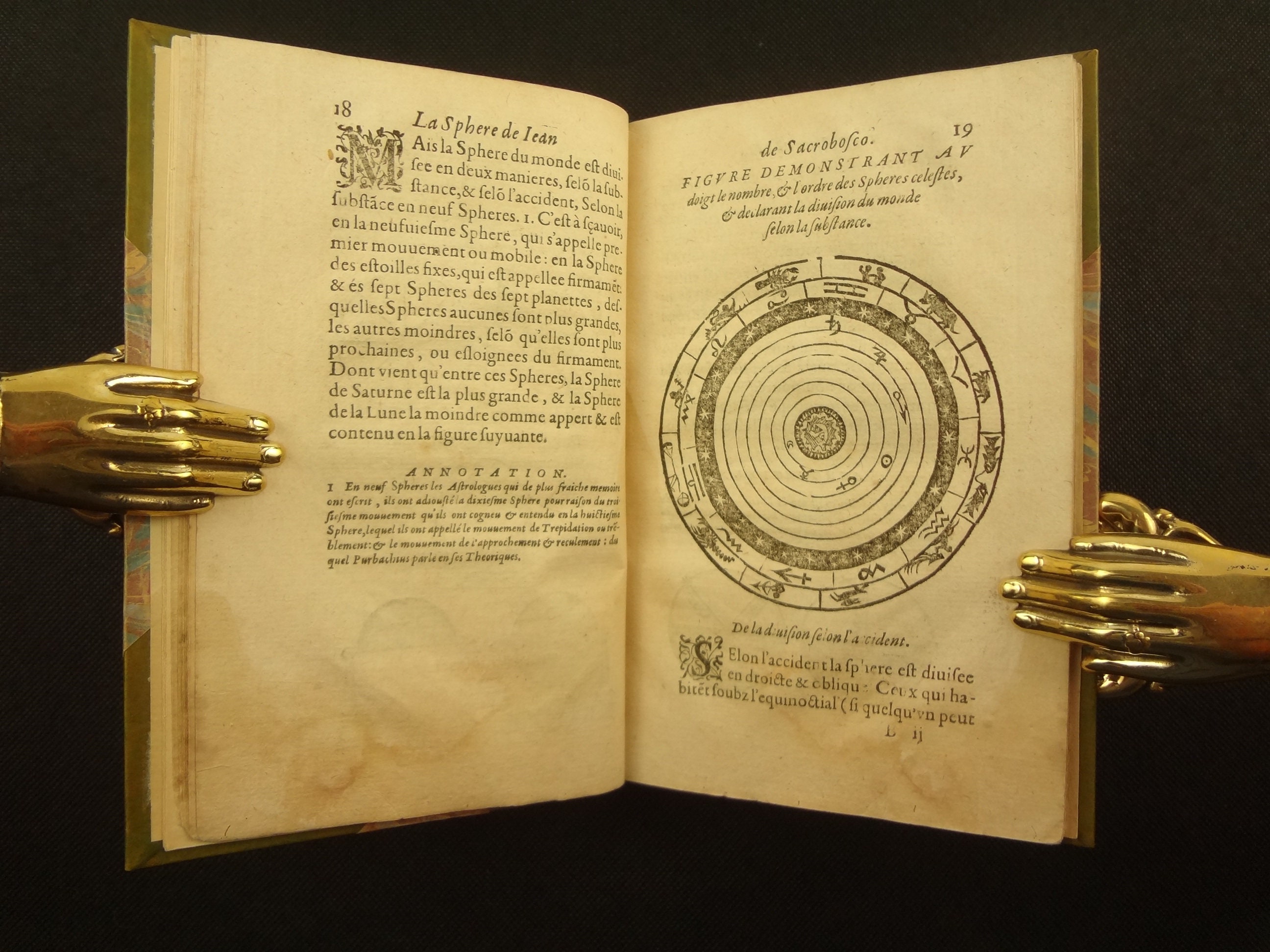 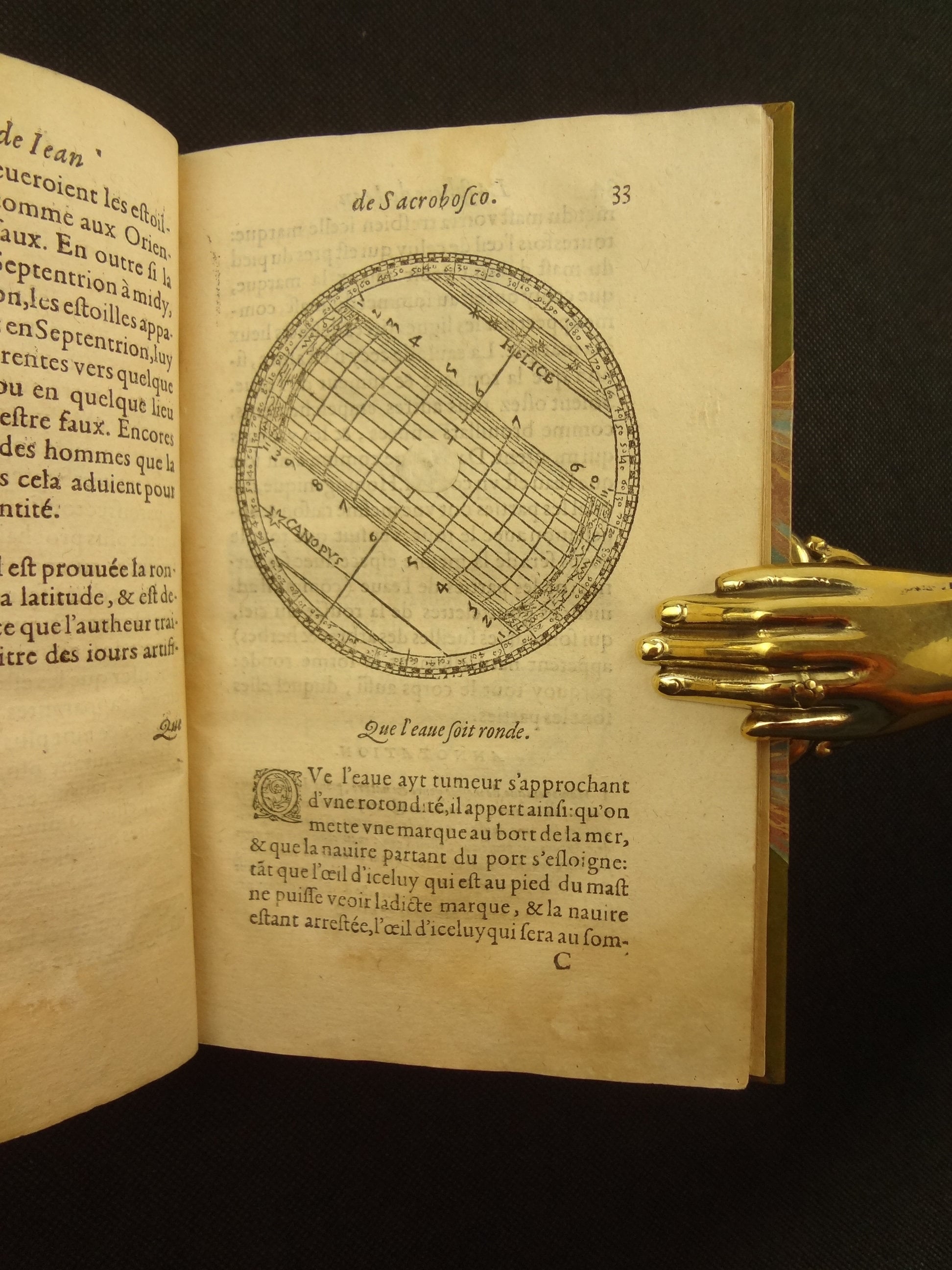 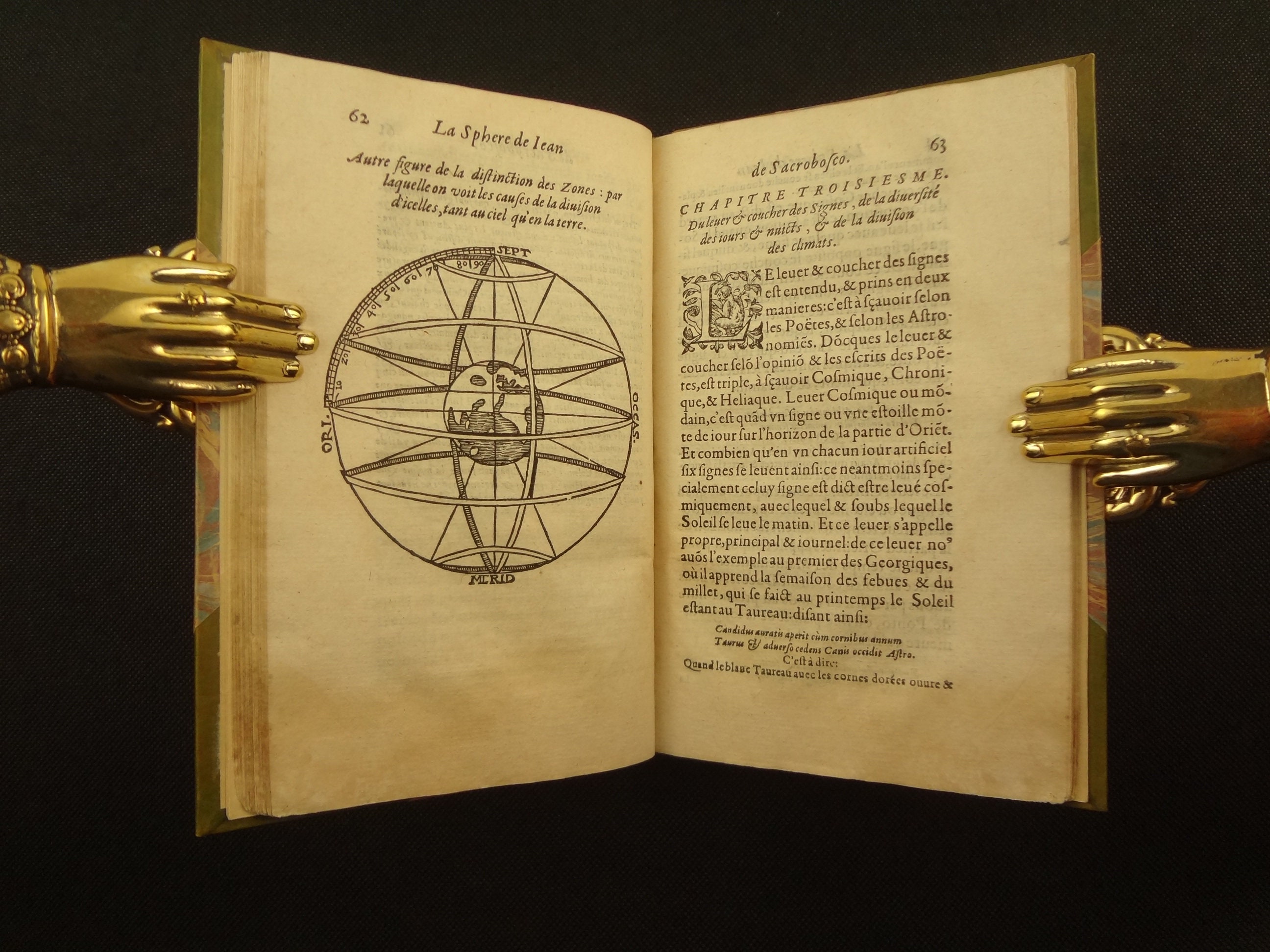 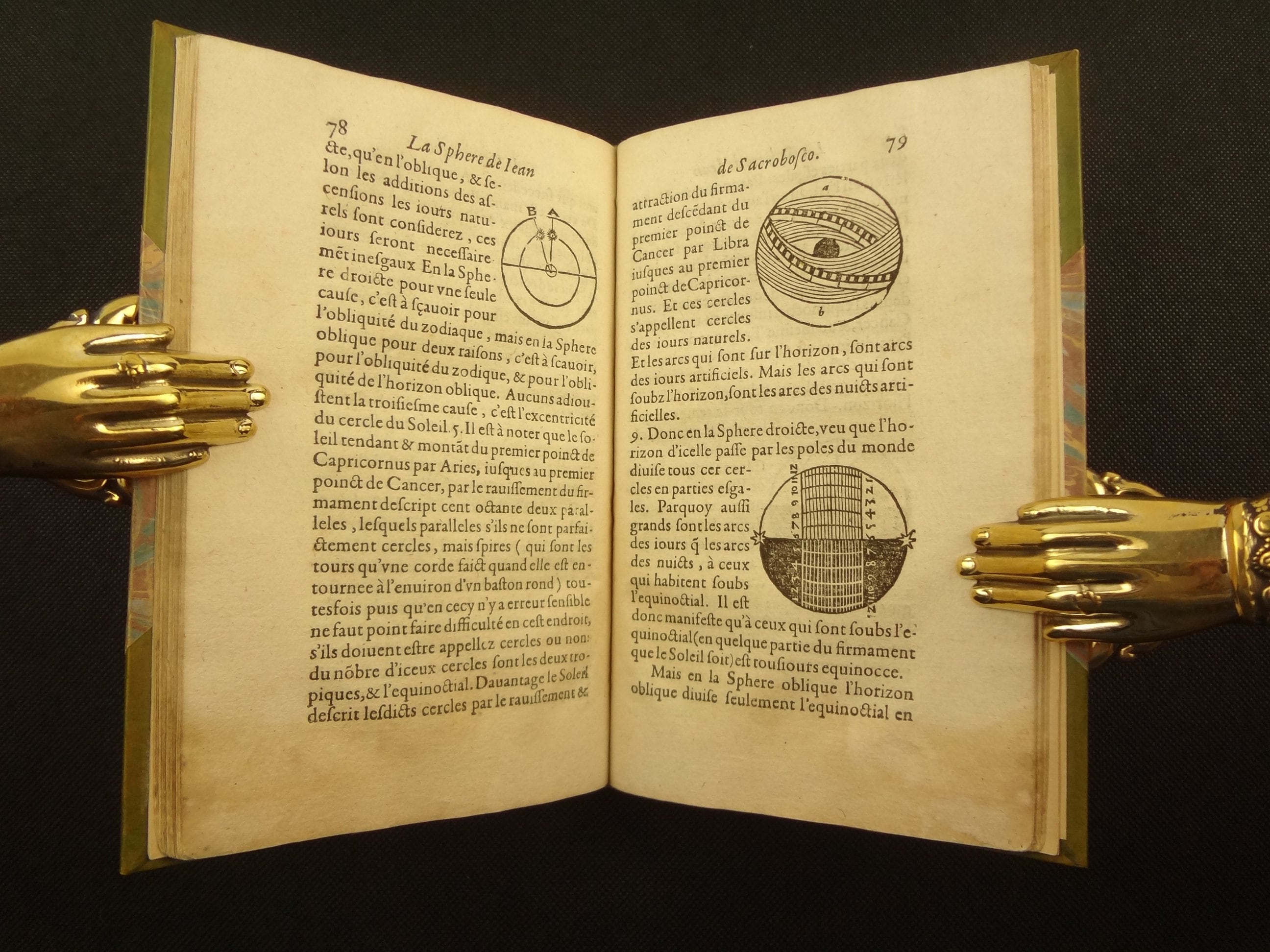 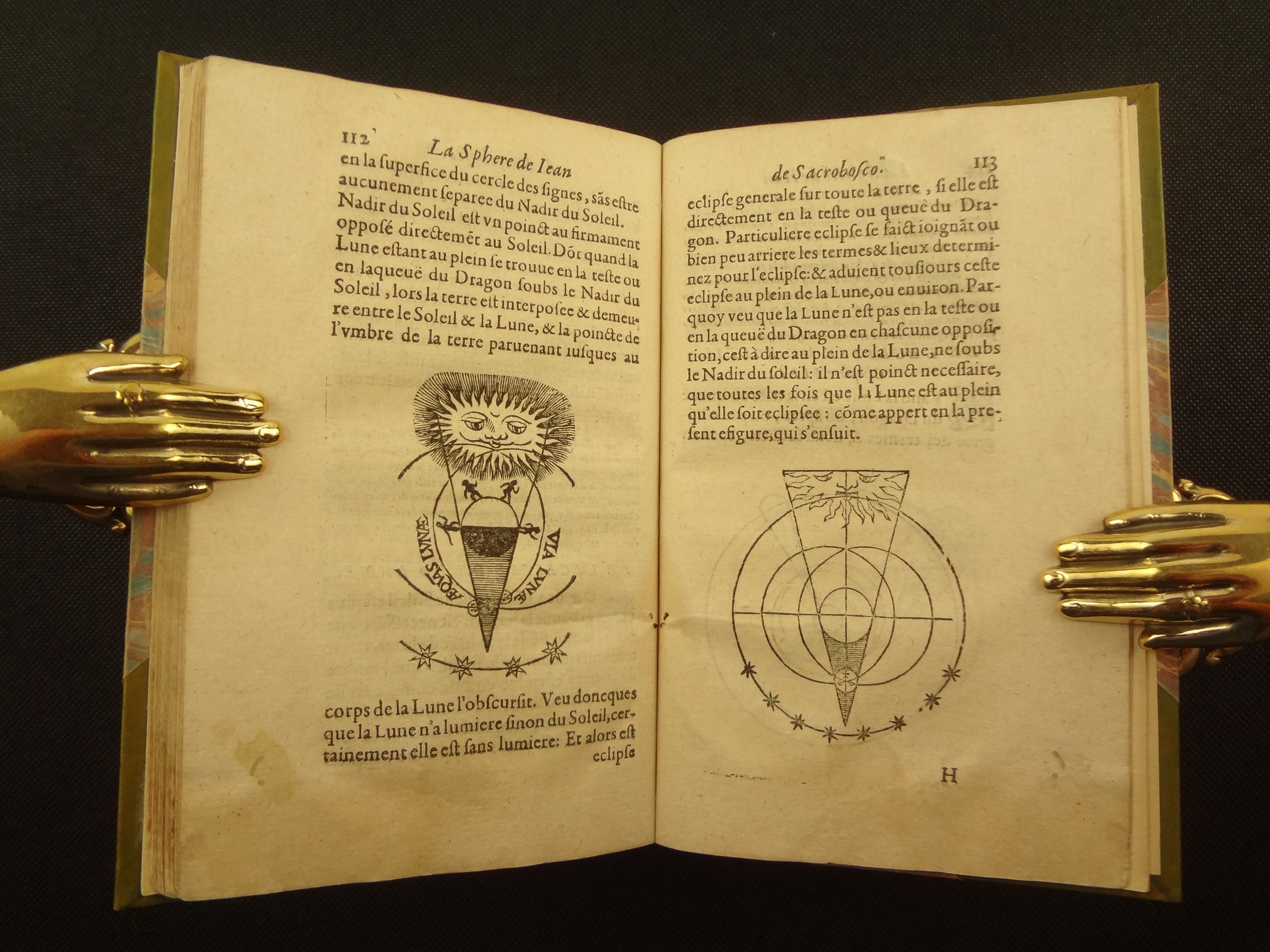 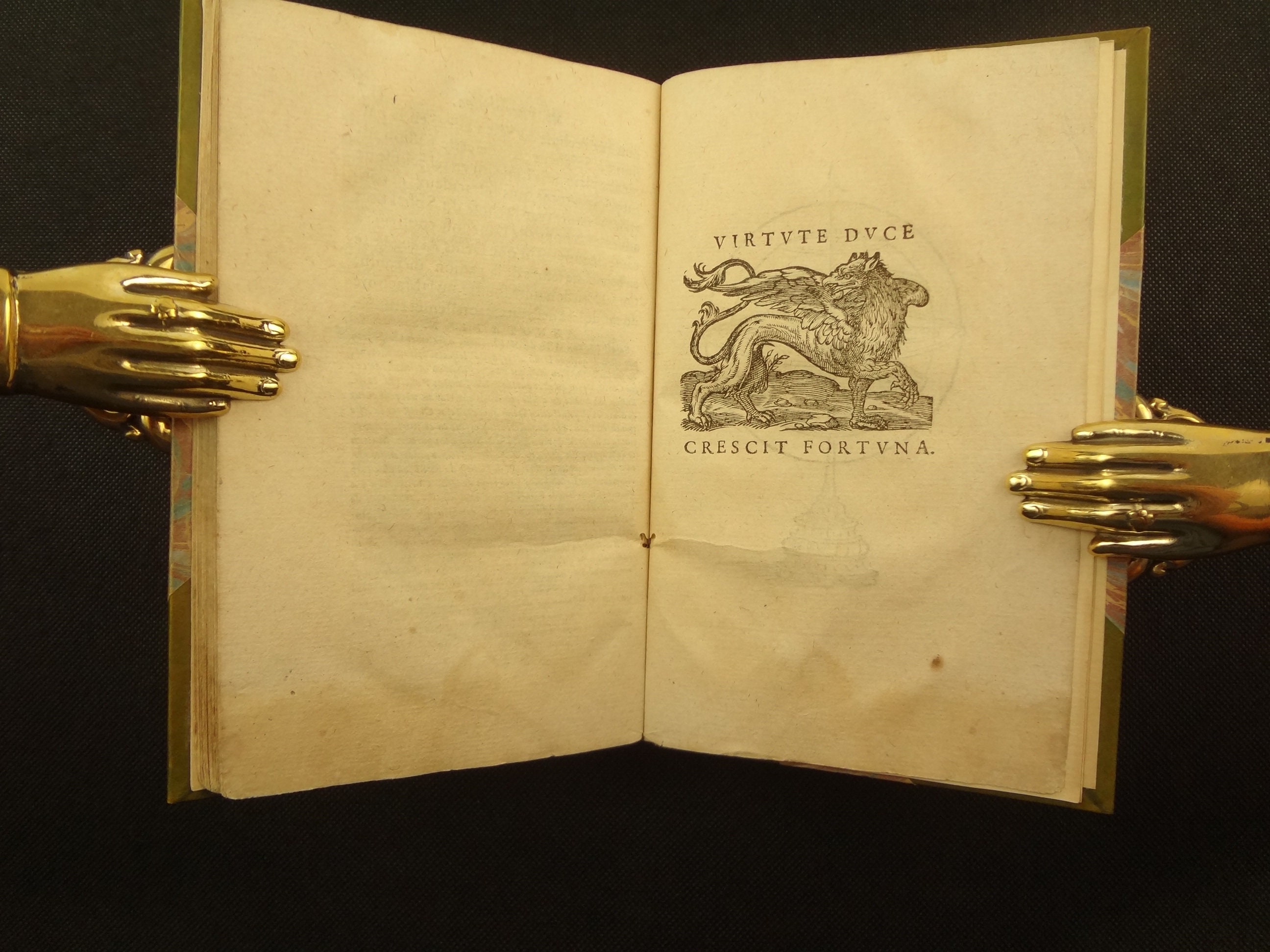 A well-illustrated 1607 edition of Sacrobosco's seminal introduction to astronomy, studied at universities as a foundational text for hundreds of years after it was introduced in the 13th century.

I count forty-three pages with illustrations, but the four volvelles (p. 30, 33, 47, 68) are missing their arms. Interestingly, the p. 47 illustrations isn't normally claimed as a volvelle, but it has a clear center circle remnant that the arms would mount too.

Johannes de Sacrobosco (c. 1195 – c. 1256), was a scholar, monk, and astronomer who taught at the University of Paris. About 1230, his best-known work, Tractatus de Sphaera / De Sphaera Mundi was published. In this book, Sacrobosco gives a readable account of the Ptolemaic universe. In addition Sacrobosco was able to draw on translations of the Arabic astronomers Thabit ibn Qurra, al-Biruni, al-Urdi, and al-Fargani.

The "sphere" Sacrobosco was referring to is the celestial sphere – an imaginary backdrop of the stars in the sky – which was the meaning of the word mundi ("world") at that time, not the planet Earth. Though principally about astronomy, in its first chapter the book also contains a clear description of the Earth as a sphere. De Sphaera Mundi was required reading by students in all western European universities for the next four hundred years. - Wikipedia

This French edition was translated by Des Bordes (his translation first appearing in 1570).

Ticket of "Harrison D. Horblit" on the pastedown. Harrison David Horblit (1912-1988) was a philanthropist and collector of books, manuscripts, and photographs. He is famous for the Harrison D. Horblit Collection of Early Photographs. Horblit was a collector of rare books related to the history of science, navigation and mathematics. In 1964 the Grolier Club published his book One hundred books famous in science, based on an exhibition at the Grolier Club.

See pictures. Binding has some light sunning, slightest hint of a bump at top right corner, occasional very light rubs and slight darkening along the gutters of the case binding joints; mostly a nice binding. Ex libris ticket of "Harrison D. Horblit" on the pastedown, and stamp of "Morley. Oxford" on the rear pastedown. Two refreshed endpapers.

Work with a light damp-stain throughout along bottom edge/corner, which reaches the text. A little toning to paper. Occasional thumb, fox spot, dog-eared page, etc.. Title page with pencil mark near top of fore-edge, 1". Moisture spot at top-edge p. 30-42, runs into text. Worm track bottom right corner, 83 to end, mostly marginal, older tissue repair (but still visible). Fox spot on rear colophon. Refreshed endpapers. Despite notes, a well-preserved copy. My theory is that when it was rebound, it was cleaned and the small worm holes lightly repaired. I think there might have been a touch of mold before, but this was also cleaned.