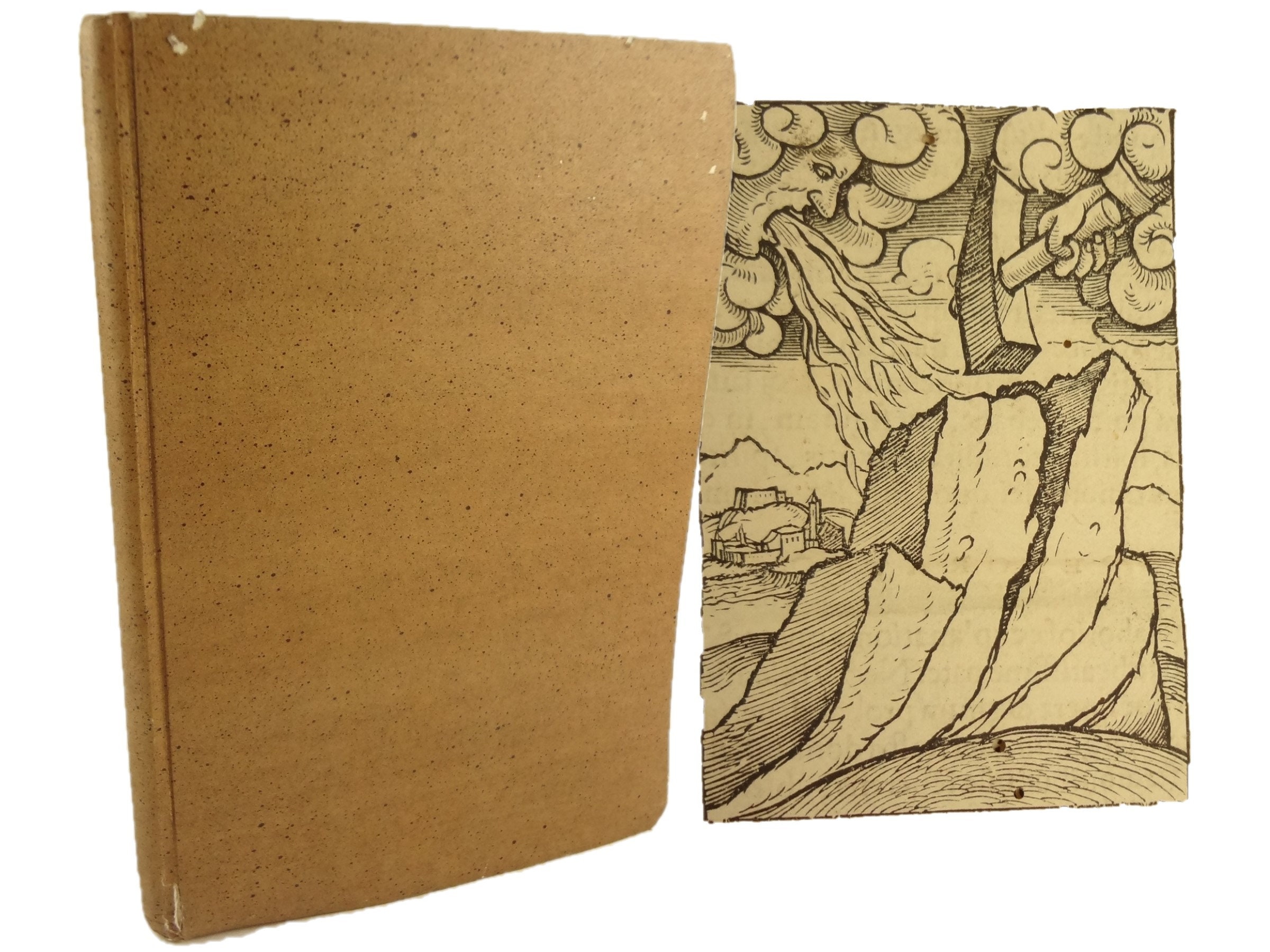 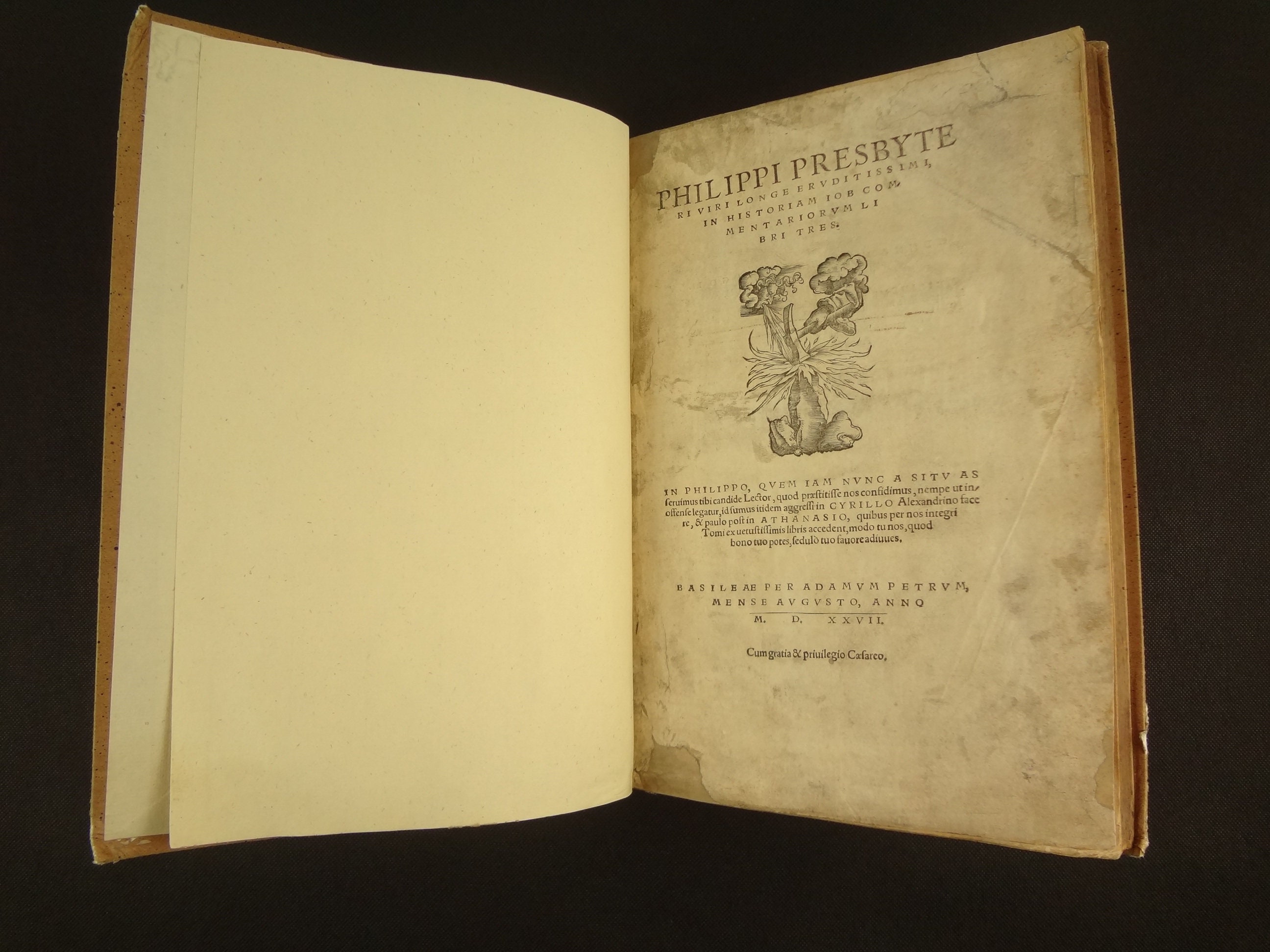 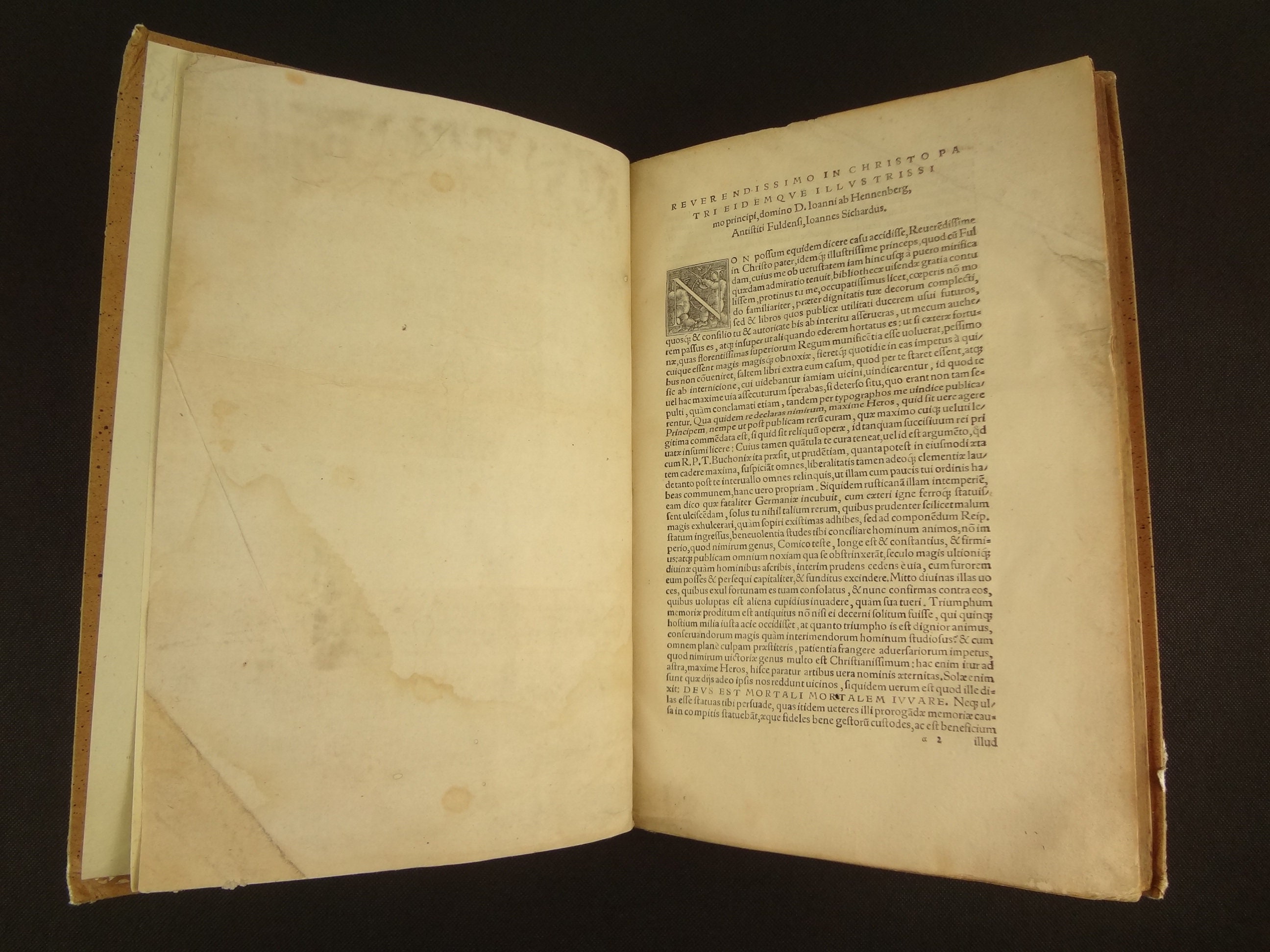 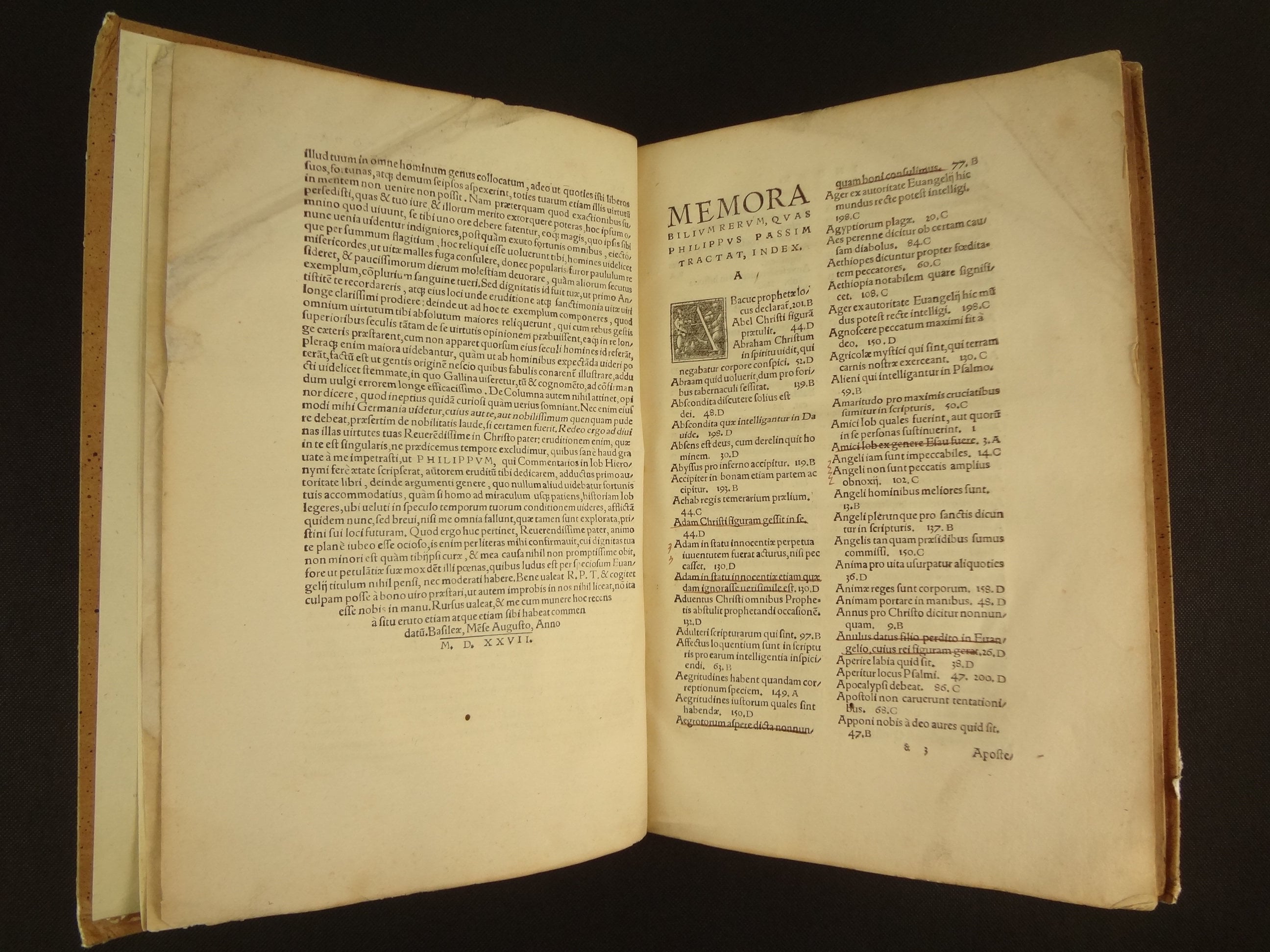 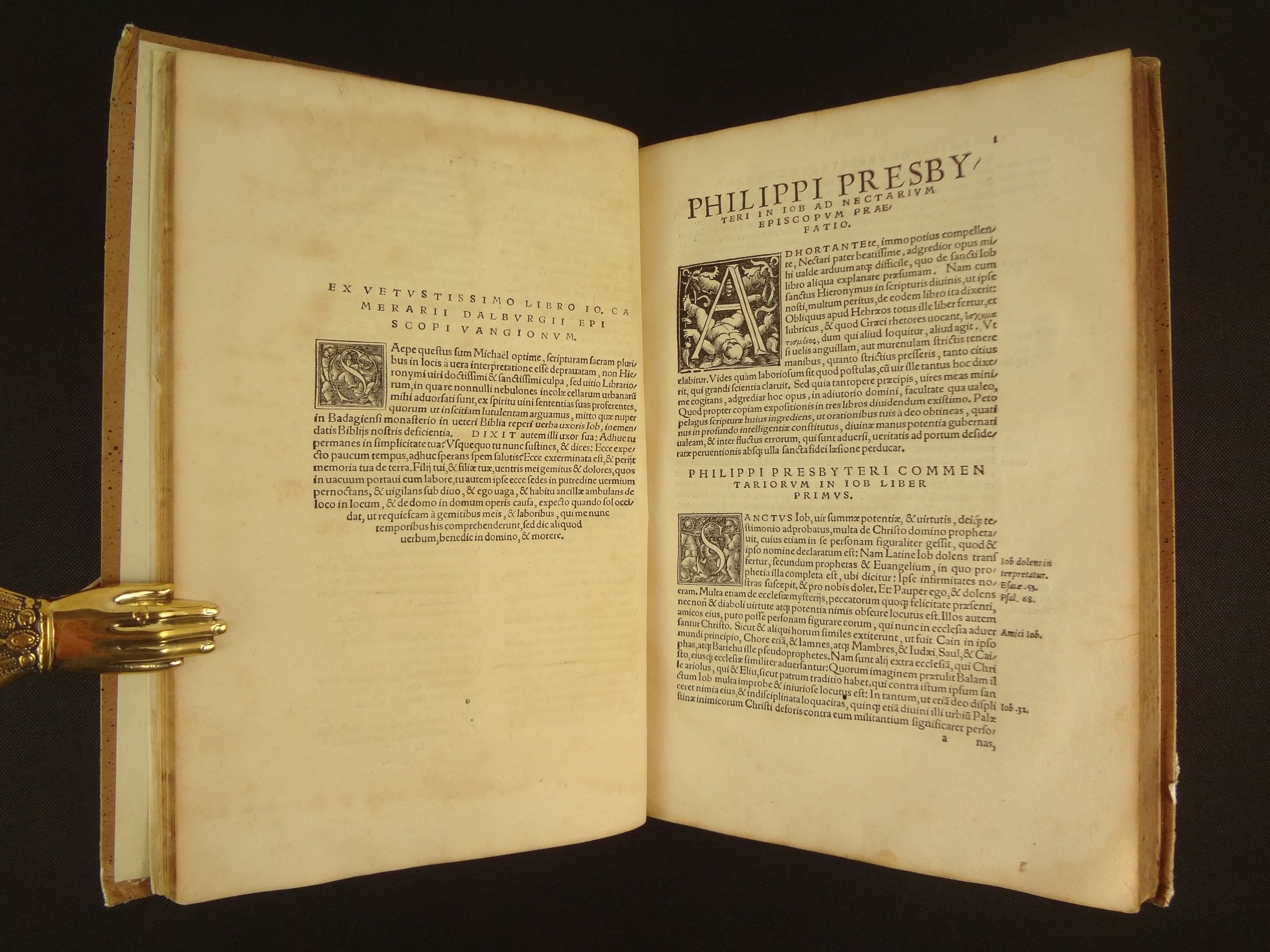 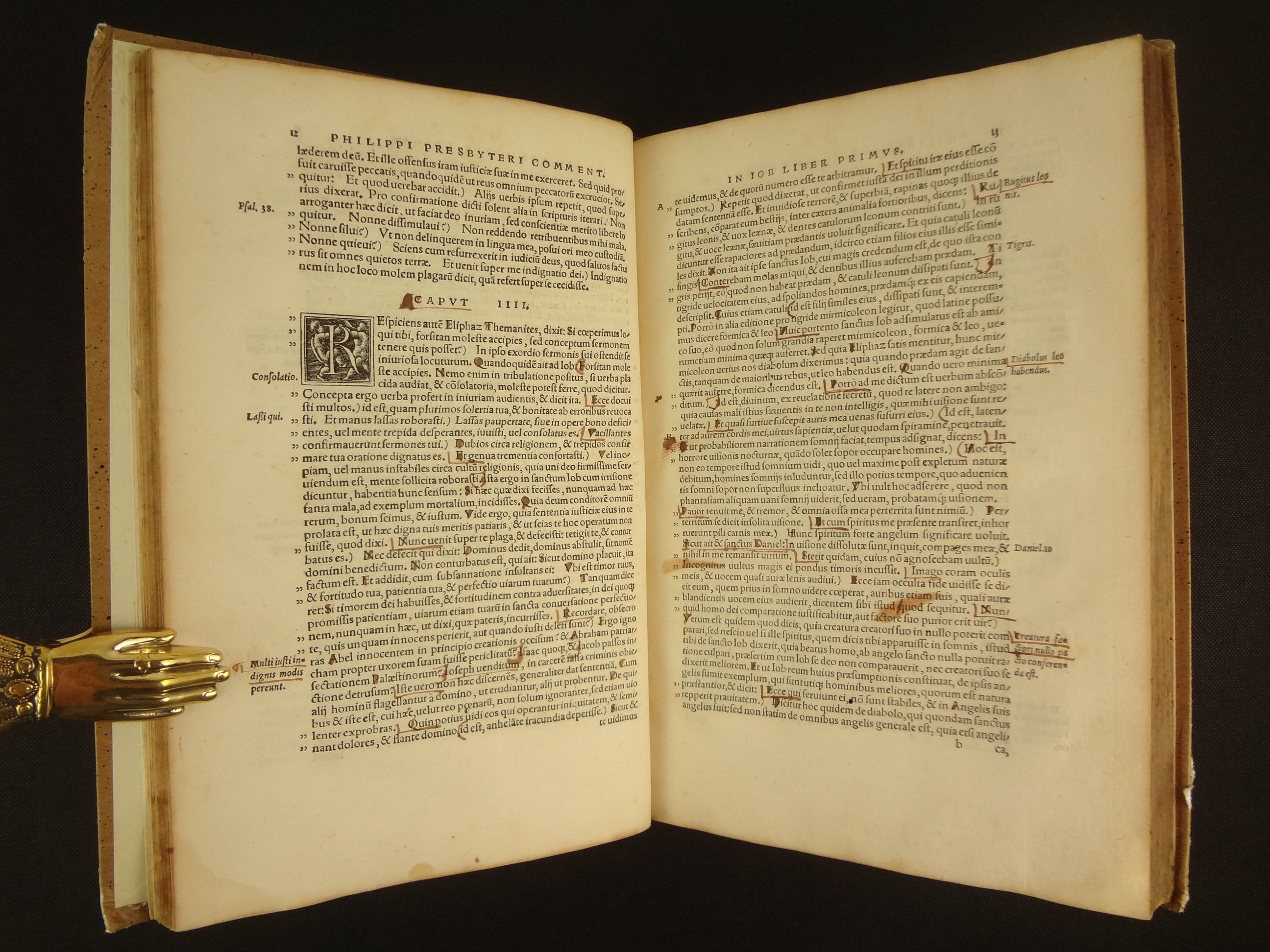 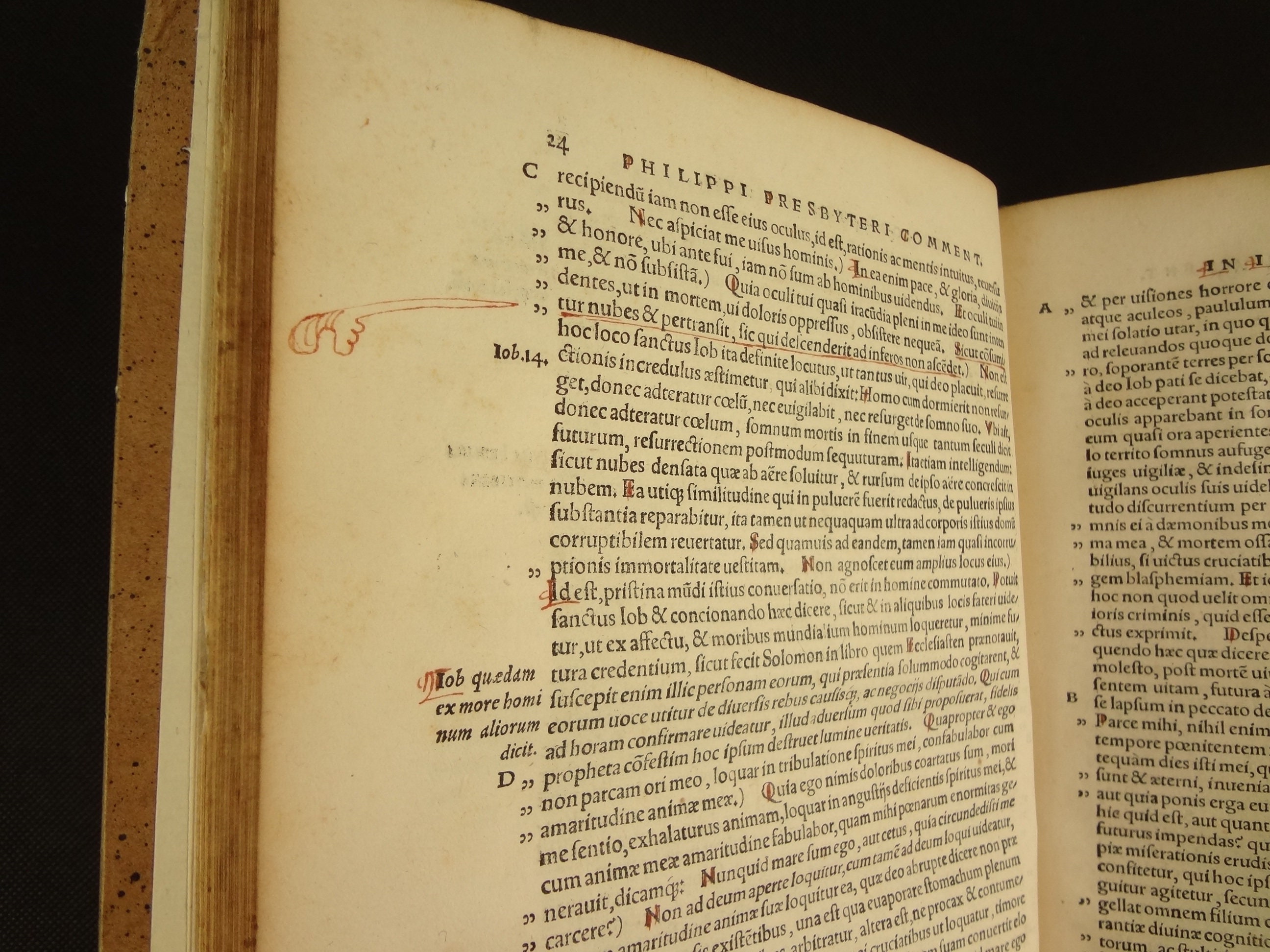 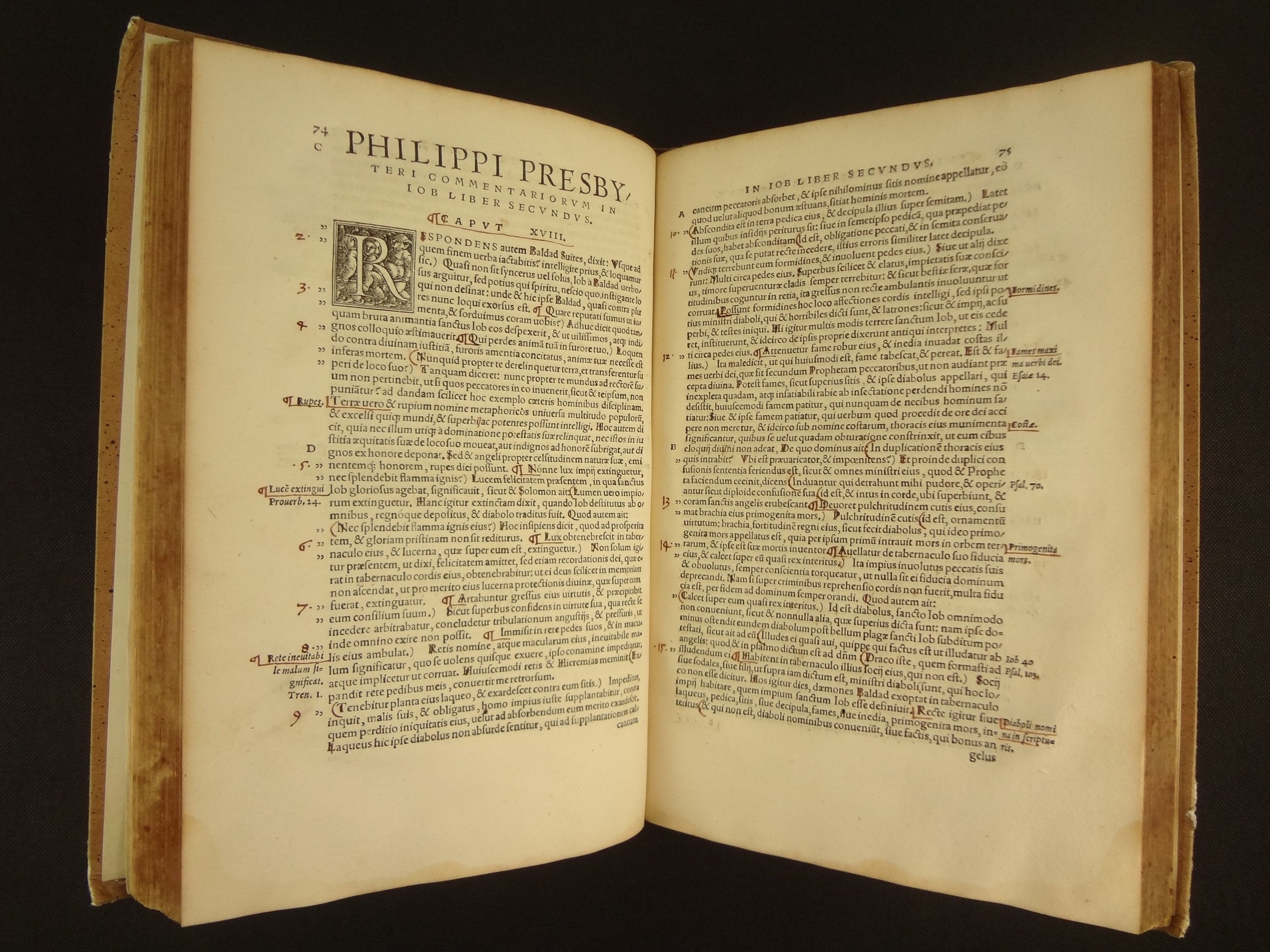 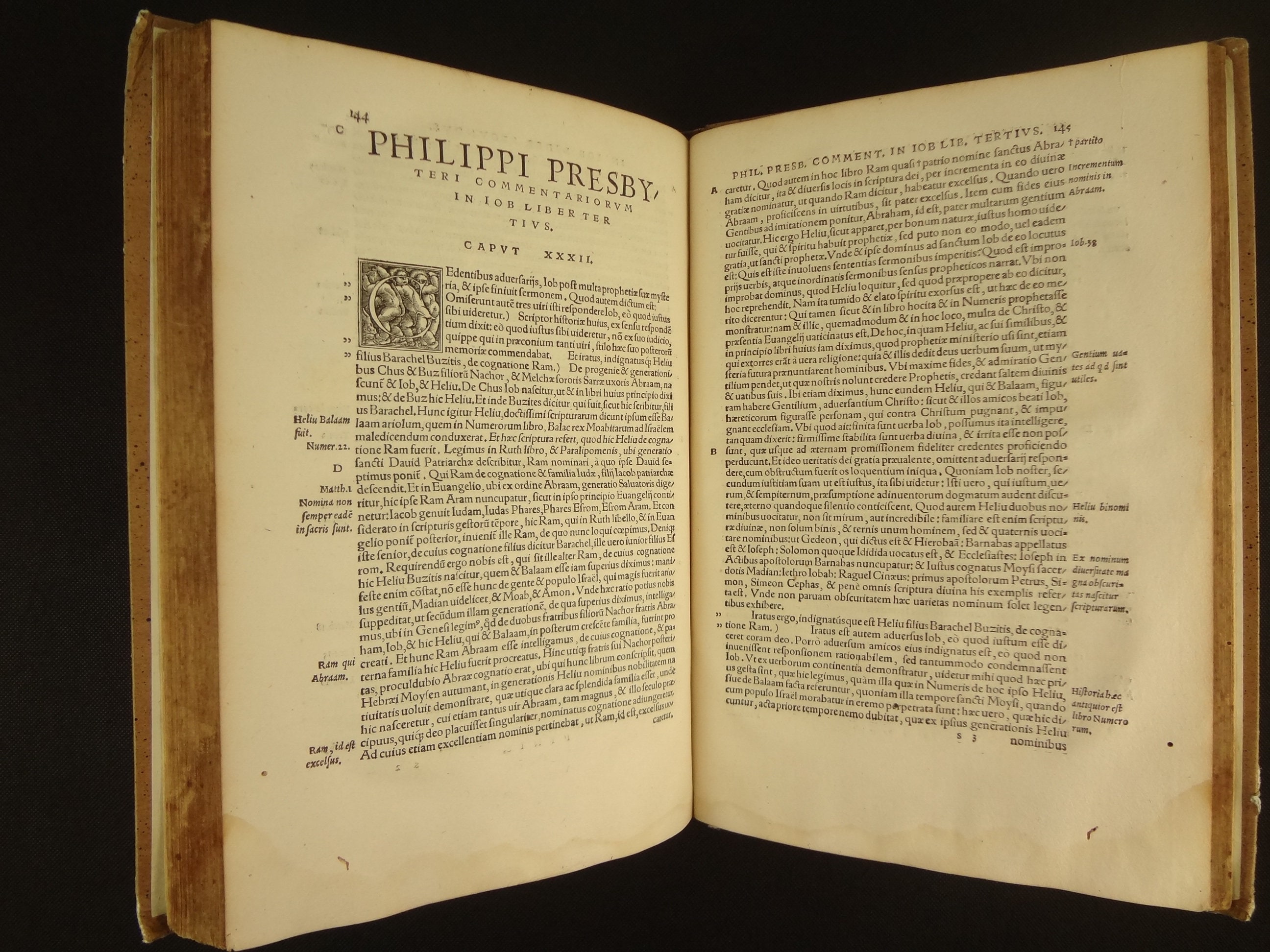 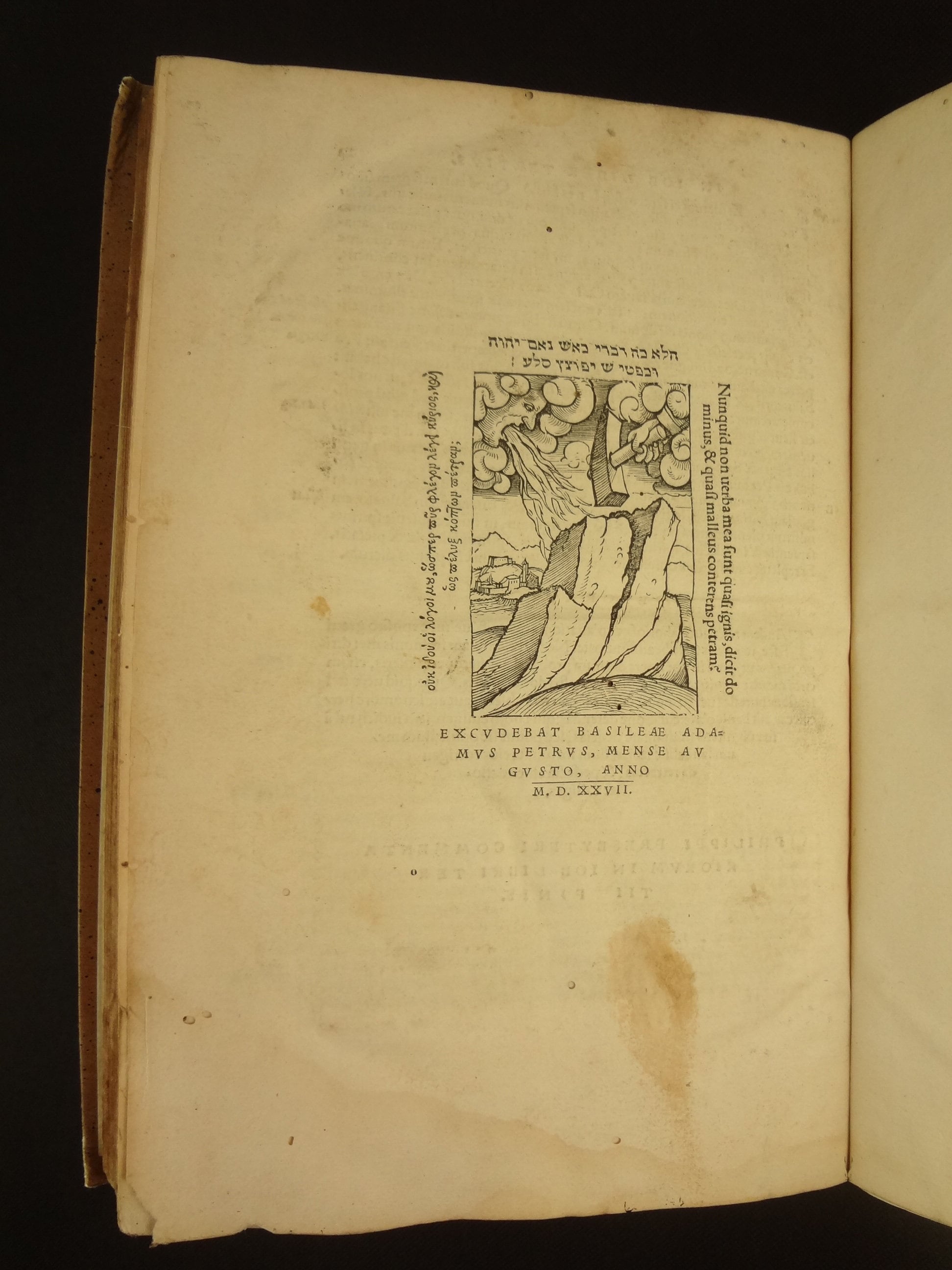 The first, and possibly only, edition of this work as a stand-alone printing and properly attributed to the 5th century church father Philip Presbyter. Presbyter studied under Jerome and this work has been wrongly attributed to Jerome and (bibliographies note, I have not verified) Venerable Bede.

It was also printed, though not often, within larger works (therefore, this is not the editio princeps). I didn't chase every occurrence but can verify that at the rear of the 1525, In Parabolas Salomnis Commentarii, Presbyter's commentary on Job was published (which was also printed in Basel, but by Froben).

I searched Worldcat for all the forms of the Presbyter name I could imagine and didn't find another edition of this book, as a stand-alone printing. It has been printed in larger editions including other author's works. Bibliographies don't mention another edition.

Scarce on the market, I can't find other examples that have been sold on the internet. That being said, I don't subscribe to the Book Auction Records software (because I've only come across several books, in ten years, with no online sales records). It isn't particularly rare in the world's libraries, Worldcat records 14 OCLC records, but they likely hold it because of its scarcity in print.

Joannes Sichardus provides the editing for this edition, and signs the dedicatory epistle to Johann von Henneberg-Scheusingen.

The 5th century historian Gennadius' De Viri Illustri... simply mentions that Philip was a disciple of Jerome, died during the reign of Marciano and Avito, and that the commentaries on Job were encouraging to the endurance of poverty and pain. - See chapter LXII in the 1718 printing.

Petri was one of the first printers in Basel who worked with illustrators. His books were illustrated by the likes of Urs Graf, Hans Holbein the Younger, and Conrad Schnitt among others. He also employed a number of prominent collaborators as writers, editors and proofreaders including Konrad Pellikan, the young Sebastian Münster, Beatus Rhenanus, Ulrich Hugwald and his relative Johannes Petreius. Petri chiefly printed devotional literature and works of practical theology. After 1517 his printshop was primarily occupied with the publication of texts of the Protestant Reformation. Of the more than 300 publications from the Offizin Adae Petri, there are more than 88 editions of Martin Luther. Passing in November of 1527, this would have been among the last of the works Adam Petri published.

See pictures. Inexpensive case binding (20th century?); corners bumped/worn, edges worn, a little waviness to boards, some rubs (a 2" square rub on back board rubbing decoration off paper). Dust along edges. Many shelf marks on pastedown. Refreshed endpapers. Title page laid down on another sheet for repair; it is well-soiled with lots of thumbing and chips around the edges (before repair). 2nd and 3rd leaf have a little damage right at fore-edge, no text affected; 1st several leaves also with crease mark from being folded over at top corner. Pages toned throughout with occasional thumb, dog-eared page, fox spot, etc. A little worming, at front it's one hole but more at rear. Ink marks, manicule, annotations, strike-throughs and underlining in an old hand. Moisture intrusion at bottom edge, mostly marginal mark; entirely dry now. Spot margin 86, 1 cm. Mark on rear printer's mark leaf. Wide margins, marginal annotations not trimmed.