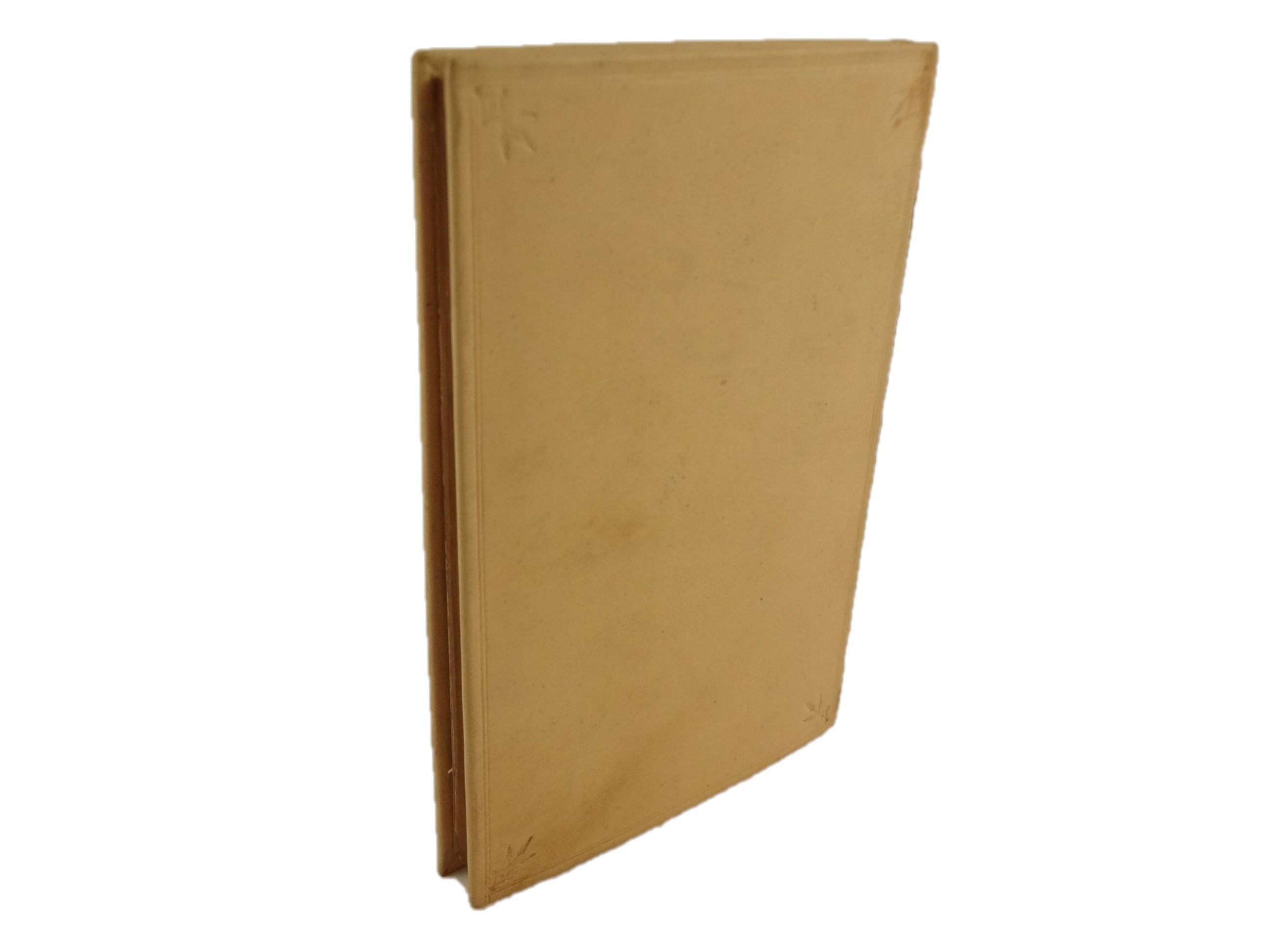 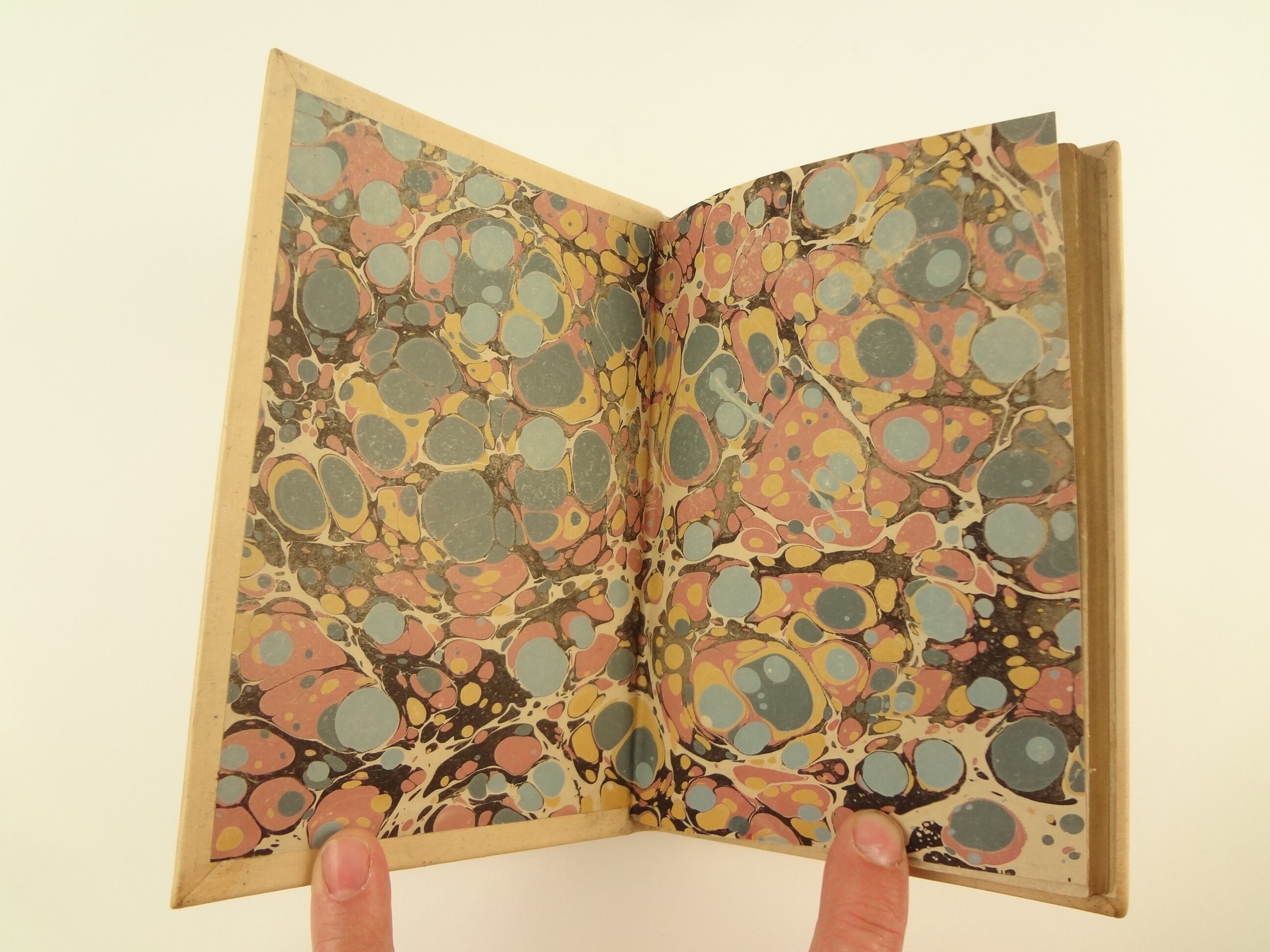 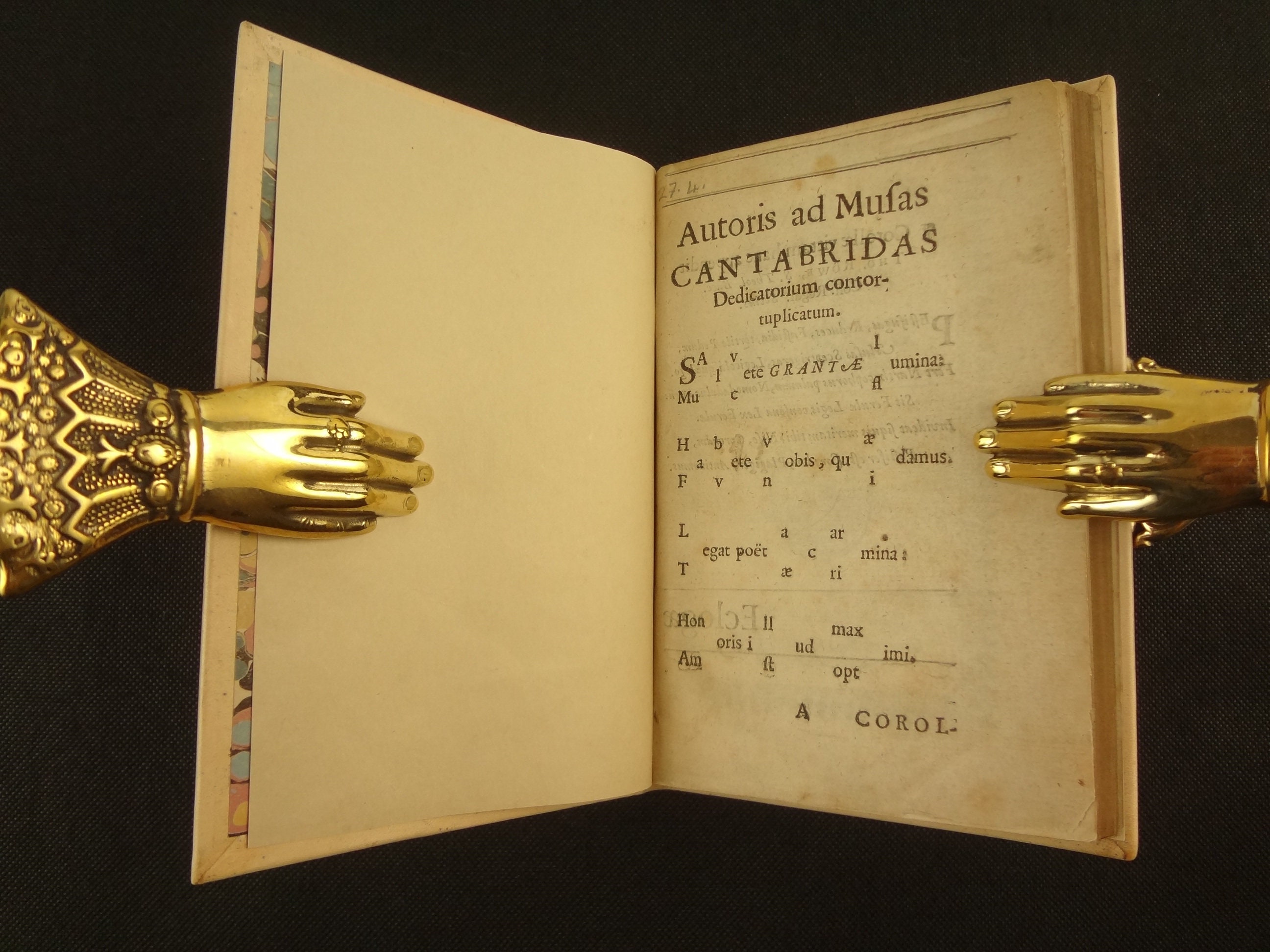 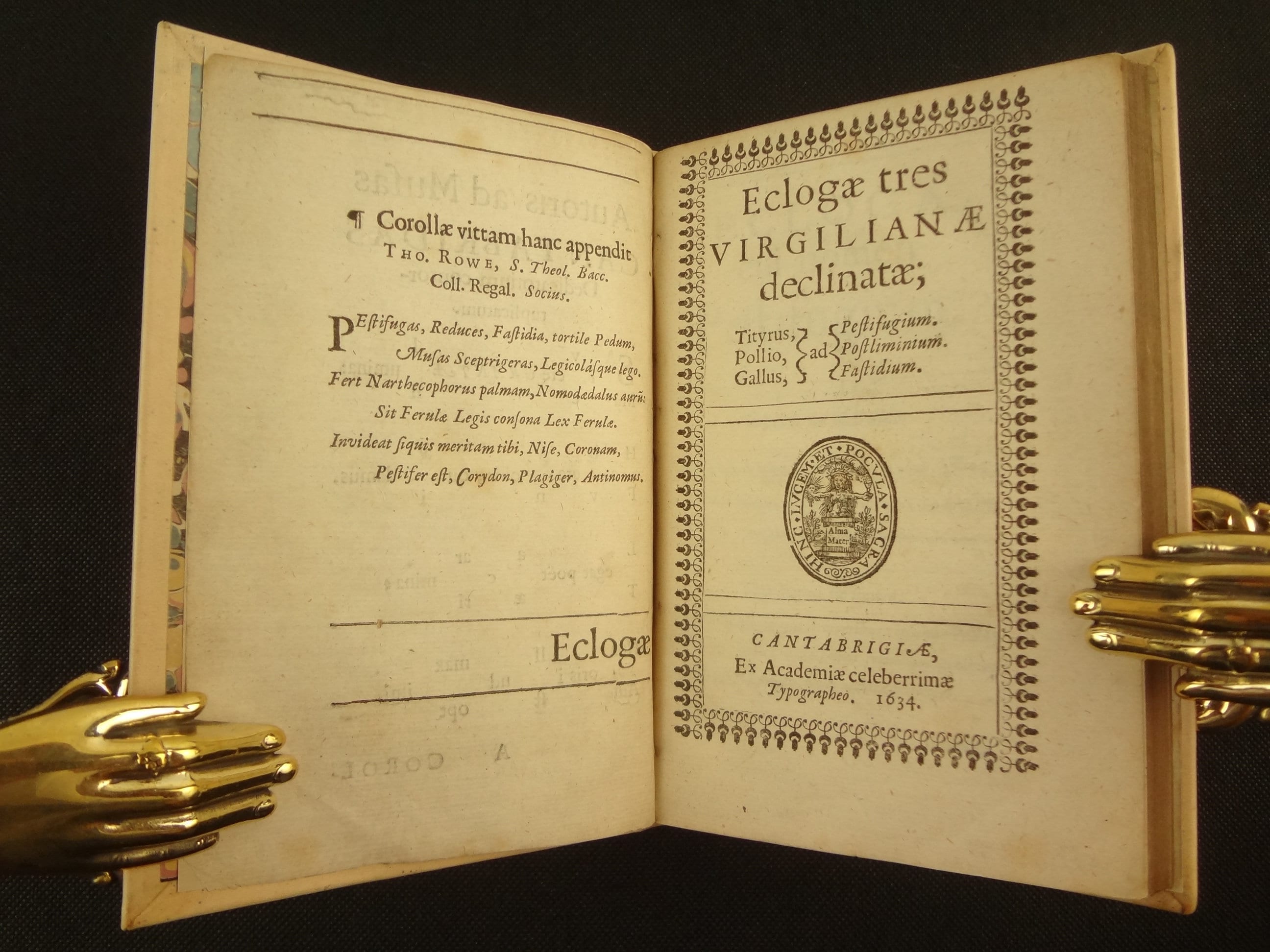 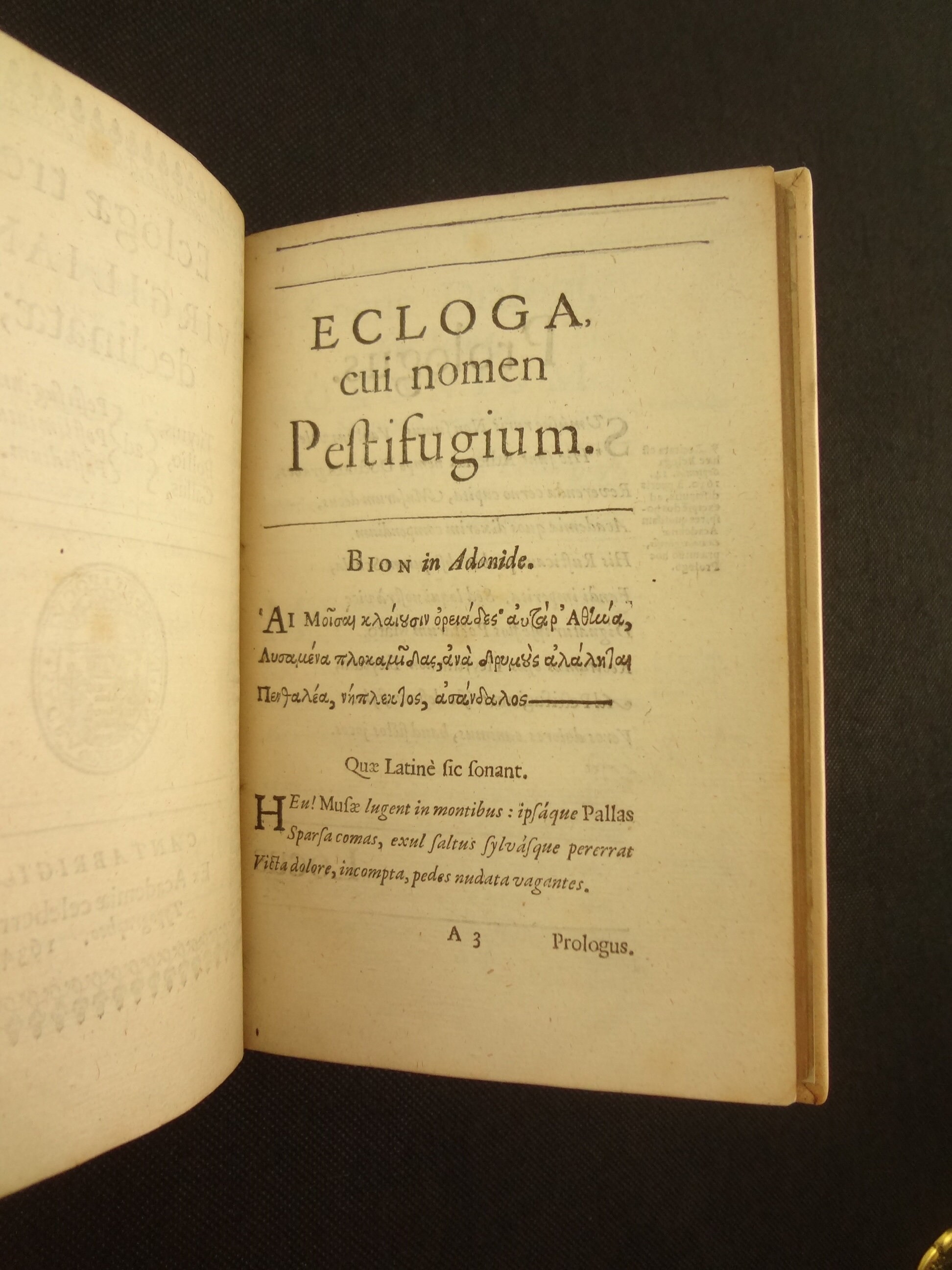 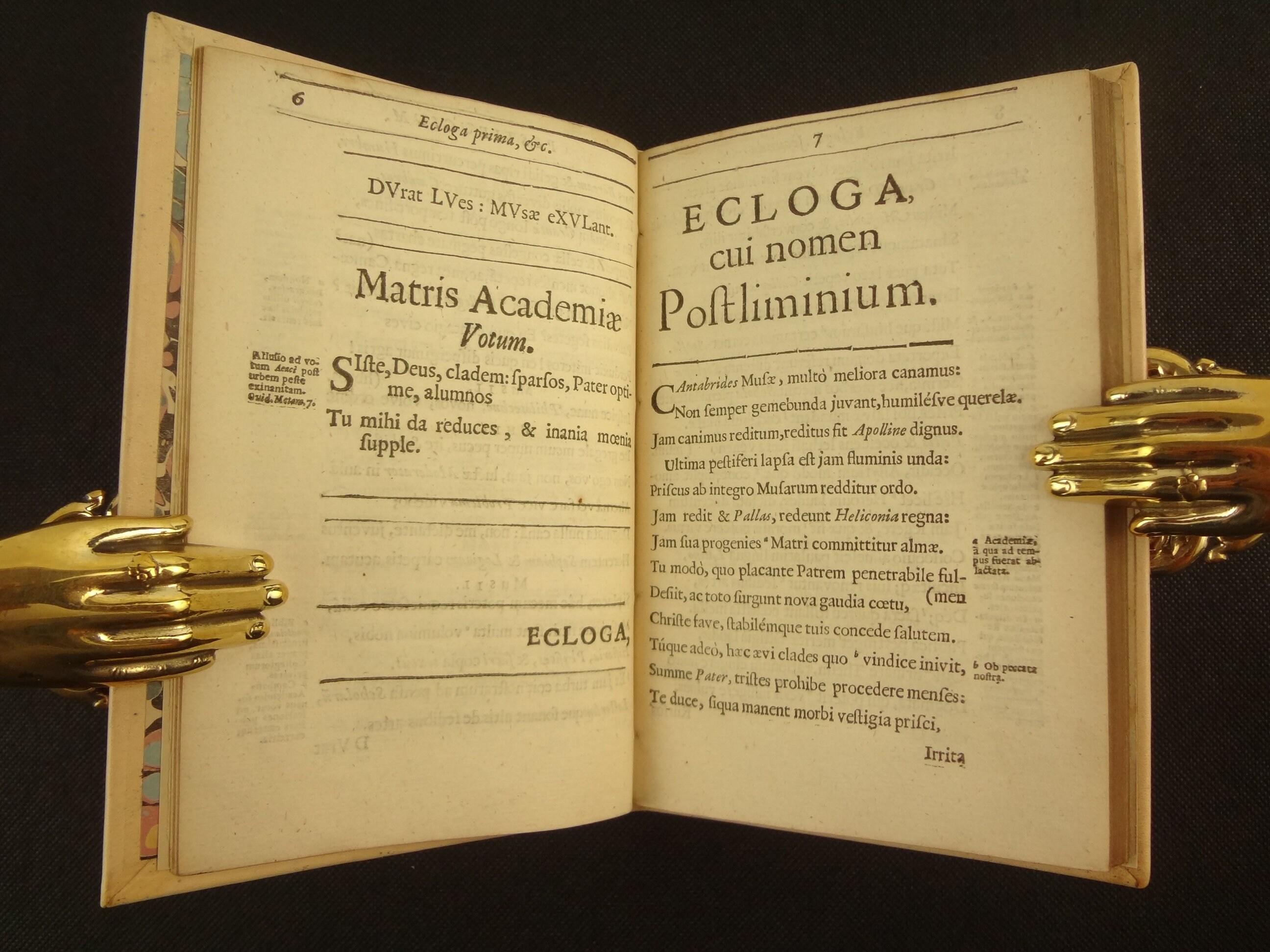 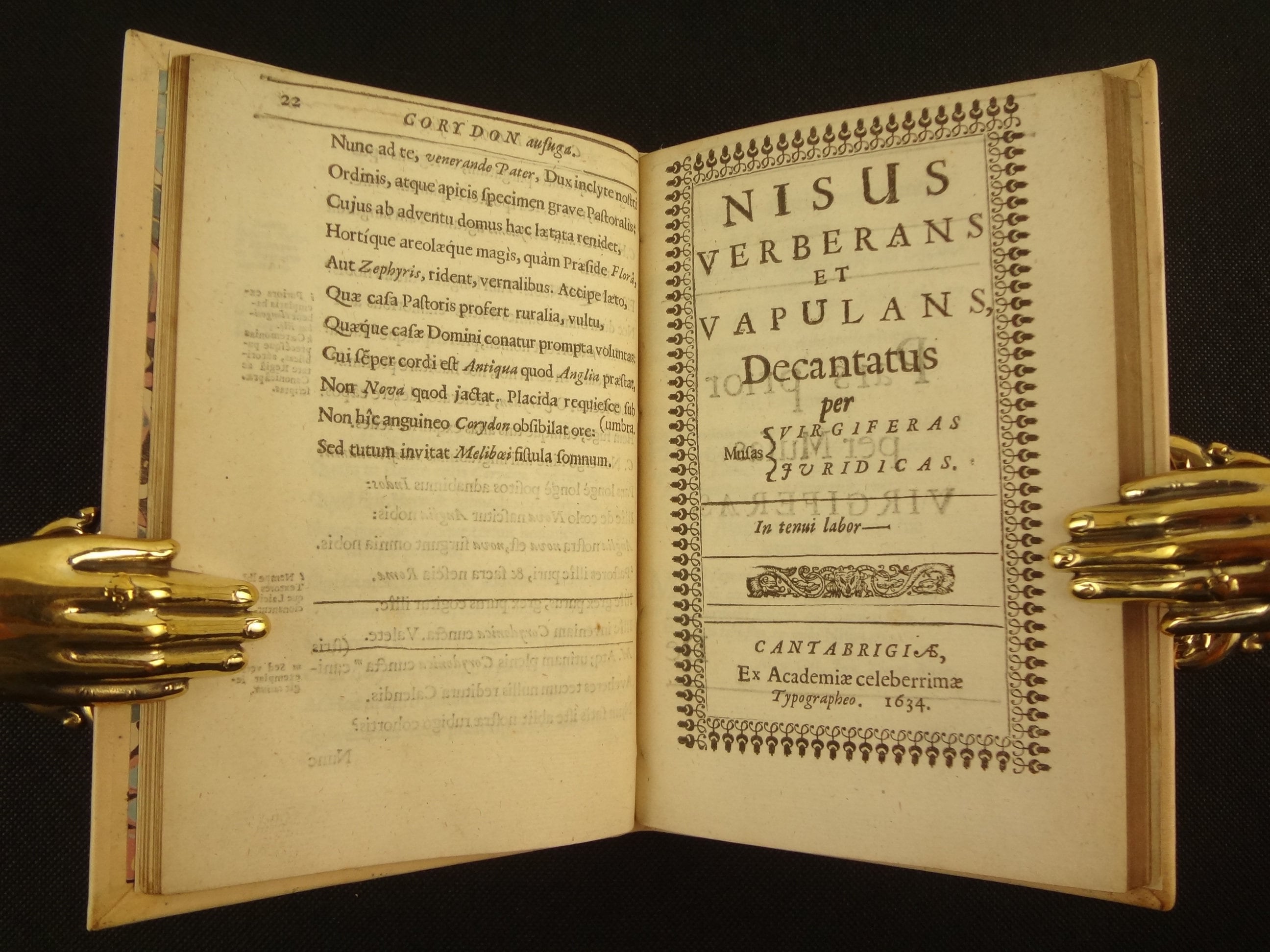 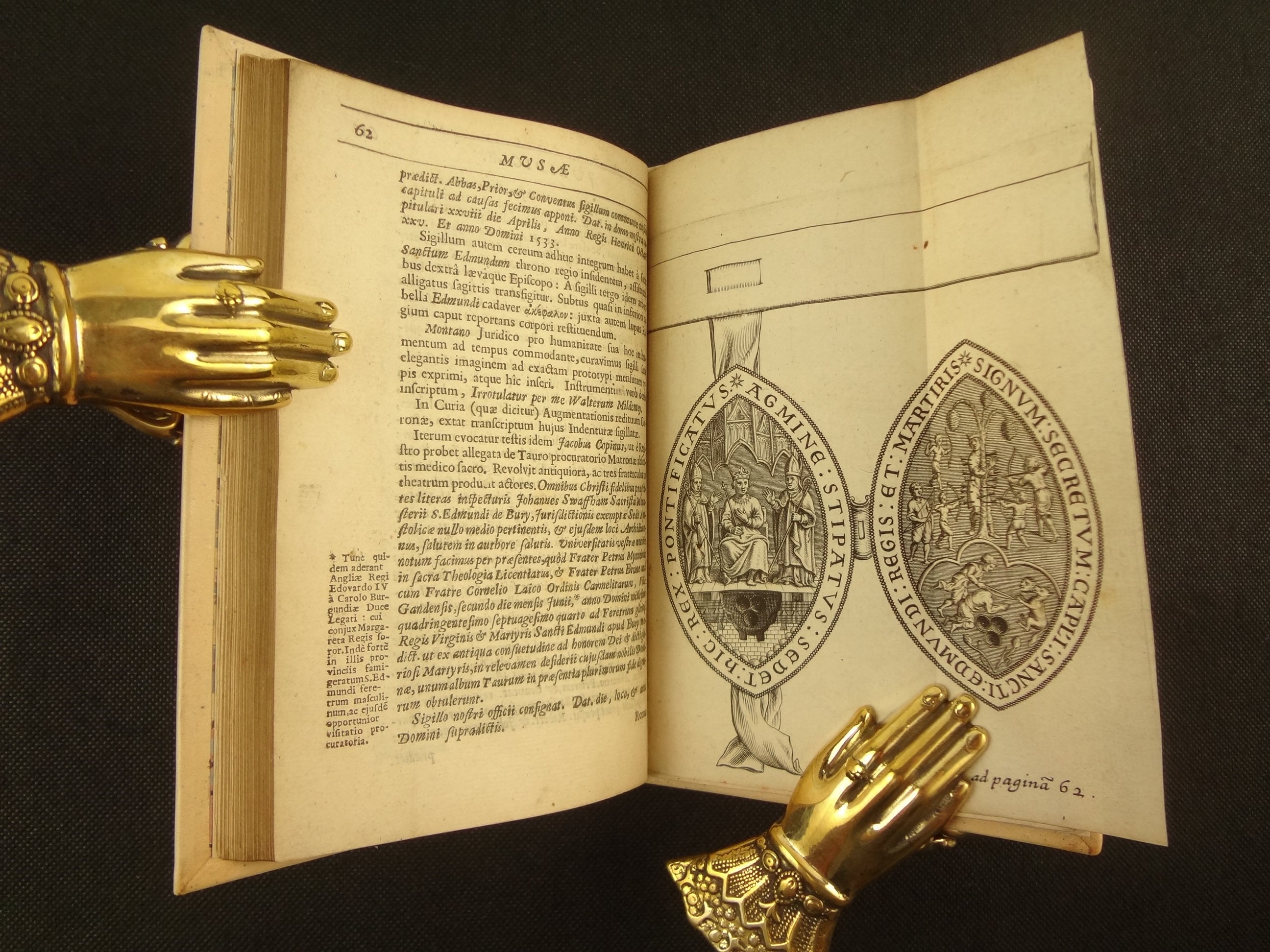 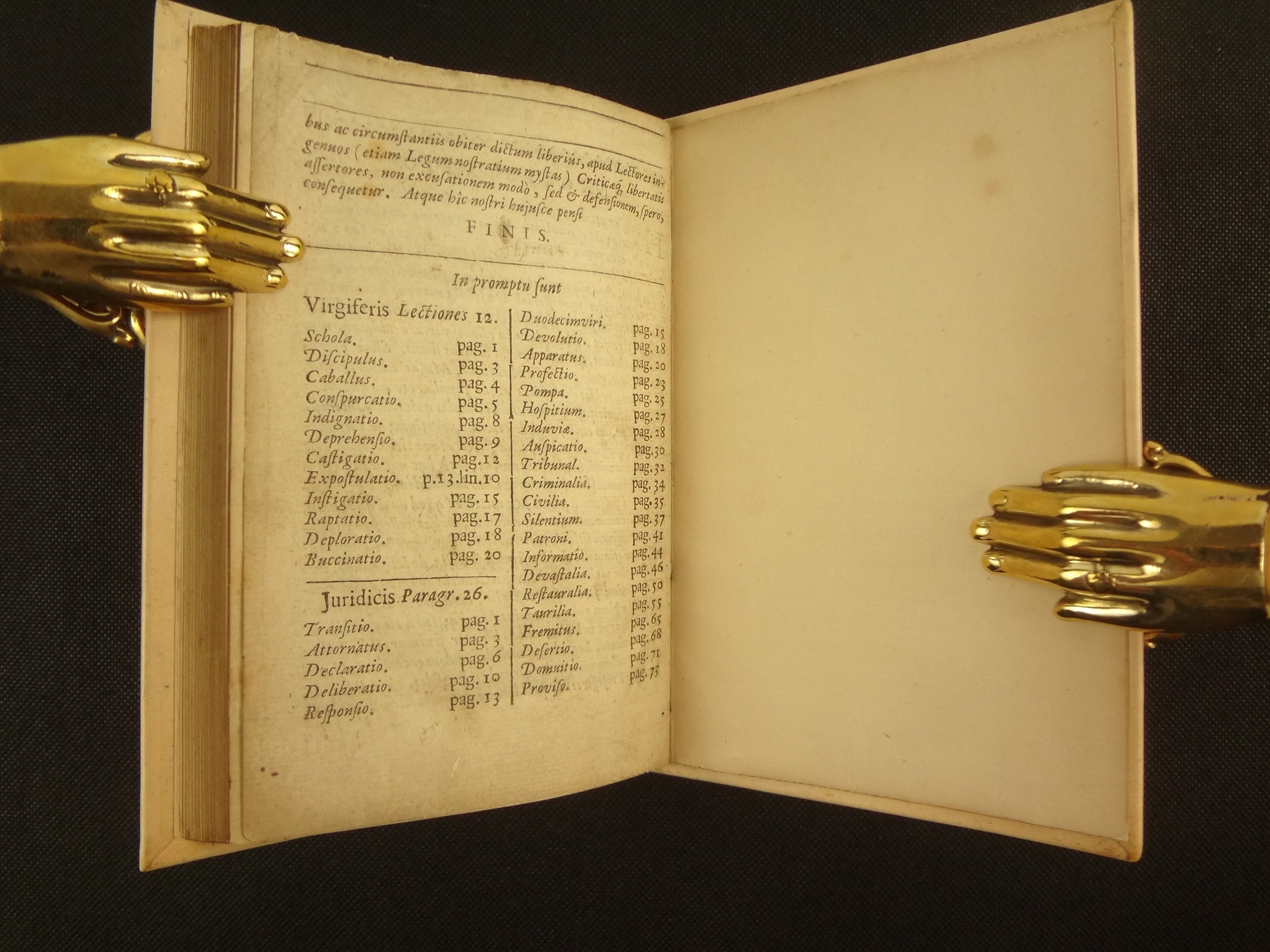 Scarce work, William Hawkins' 1634 Corolla Varia, in an attractive binding. The first is a story of the plague, all the more impactful since Hawkins likely died of the plague just several years later. Very uncommon to see this book come to market. This copy missing its engraved frontis, but supplied in facsimile, printed from a scan of the Folger's copy. It's long been scarce on the market, Pickering and Chatto's 1899 catalogue called this "a rare poetical volume".

"The first part is made up of four short pieces . The first of these , called Pestifugium , is a kind of parody of the first Eclogue of Virgil , and contains a dialogue between an Oxford man and a Cambridge man , who , being obliged to leave his own University through the breaking out of the plague , had taken refuge at Oxford , with the intention of pursuing his studies there for some time . This poem was recited by the boys of Hadleigh School , on Septr . 14 , 1630 , in the presence of some members of the University of Cambridge , who , flying from the danger which beset them there , had betaken themselves for safety to our town ; for the following line which is prefixed to the poem , and reminds us of the Chronogram placed by Dr. Goad on the Sun - dial at the Church , shews , I think , not only the date of the plague , but the cause of Mr. Hawkins ' having such learned visitors to entertain :"

"The second poem , called Postliminium , describes the joy which was experienced by the members of the University , when by the ceasing of the plague , they were enabled after a nine months exile , to return to Cambridge . The third contains the lament of Mr. Hawkins ( Nisus , at being obliged to discharge the distasteful office of a schoolmaster , and the endeavour of a friend whose name appears to have been White ( Leucus , ) and who was also a schoolmaster , to reconcile him to his fate by reminding him that such an office was worthy of a Clergyman , since our Lord Himself loved little children and took them up in His arms and blessed them ; and that even if the task were disagreeable he ought to be content to “ endure hardness , " as Prophets and Apostles , and Apostolic men had done before him . The fourth is a sarcastic and amusing dialogue between a sound thinking Churchman and a Puritan , and was spoken by two of the boys of Hadleigh school , on April 9 , 1632 , on the occasion of a visit by the Bishop ( John Bowle ) of Rochester . The Puritan's Bartoloyla - his fondness for assertions without proof , the absurdities to which his principles , if carried out , would lead him , are laughably depicted , and as was especially befitting in the presence of a Bishop , he is ignominiously driven off the field . The second part is entirely taken up with one long poem , and relates an extraordinary trouble - far more distressing than the ordinary grievances of which he had previously complained — experienced by Mr. Hawkins , while Master of our School ."

The last part of the book is best described by an article in the 1899 The Gentleman’s Magazine Library:

"The below are extracted from the Corolla Varia of the Rev.William Hawkins, M.A., schoolmaster, of Hadleigh, in Suffolk, an entertaining and classical, but now scarce, publication, printed at Cambridge in 1634…"

"The occasion of the latter was briefly this : The three sons of a Mr. Colman, of Payton Hall (Carbonius et Carbunculi) being admitted at Hadleigh school, one of them in less than two years, unprovoked and unthreatened, ran away ; but a few months after, in the absence of the master and scholars, thought proper to enter the schoolroom and filthily bedaub a wooden horse, used for the purpose of flagellation. He was seen, however, by one of the boys, and boasted of it afterwards to others. A week after, accompanied by a relation, he returned to repeat his prank, but was then detected by his master, who very properly chastised him, but gently, giving him only four lashes. For this assault (as it was termed) an action was brought against him by the father at Bury assizes, and the damages were laid at 40 pounds. This action Mr. Hawkins was obliged to defend at great trouble and expense, and at last, before issue was joined, the plaintiff withdrew his plea. All the circumstances of this case, the law process, etc., are described with great elegance and humour, and several commendatory poems are prefixed."

HAWKINS, WILLIAM (d. 1637), poet, was probably born at Oakington, near Cambridge. He was educated at Christ's College, Cambridge, graduating B.A. 1622–3, and M.A. 1626. In the interval he became master of the free grammar school at Hadleigh, Suffolk, but gave up the post to become curate to the rector of Hadleigh, Dr. Thomas Goad, who admired his Latin verses. He died in 1637 probably of the plague then raging, and was buried at Hadleigh on 29 June of that year.

Collation - Missing one plate at front that had its own collation (the title page engraving). Collates A1-I8.

See pictures. Attractive binding with only the lightest of rubbing. Engraved frontis missing, supplied in facsimile (loose leaf). Pencil shelf-mark at top of "A". Toning throughout, with some thumbing, occasional fox spot, a few dog-eared pages. Top-edge trimmed a little tight, occasionally touching header. p75, at rear, has upper corner repaired. Last five leaves have some soiling, etc to upper corner. A little separation, at gutter, between 76 and last leaf. A little chipping at top of last leaf, and name written below "FINIS".