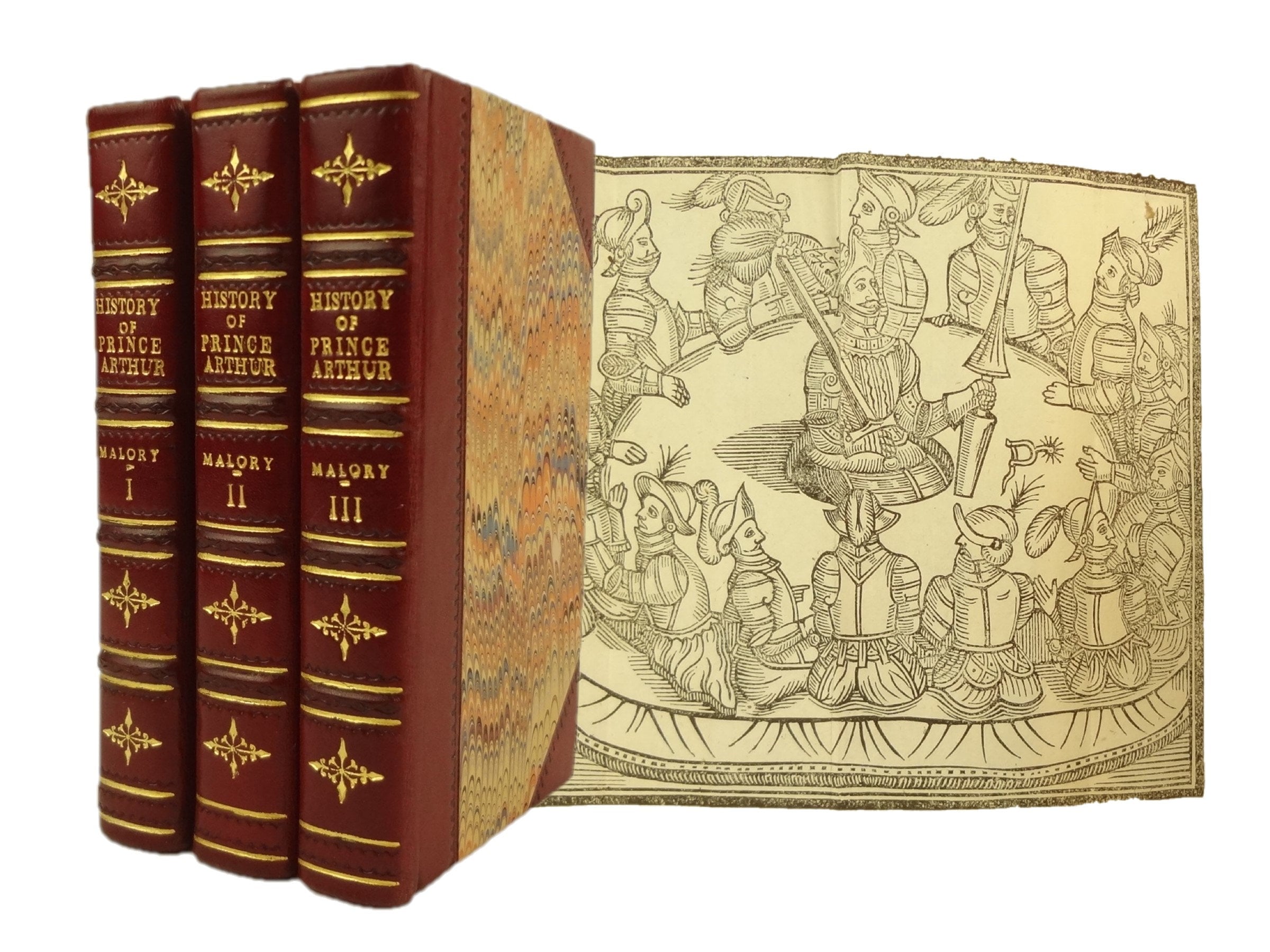 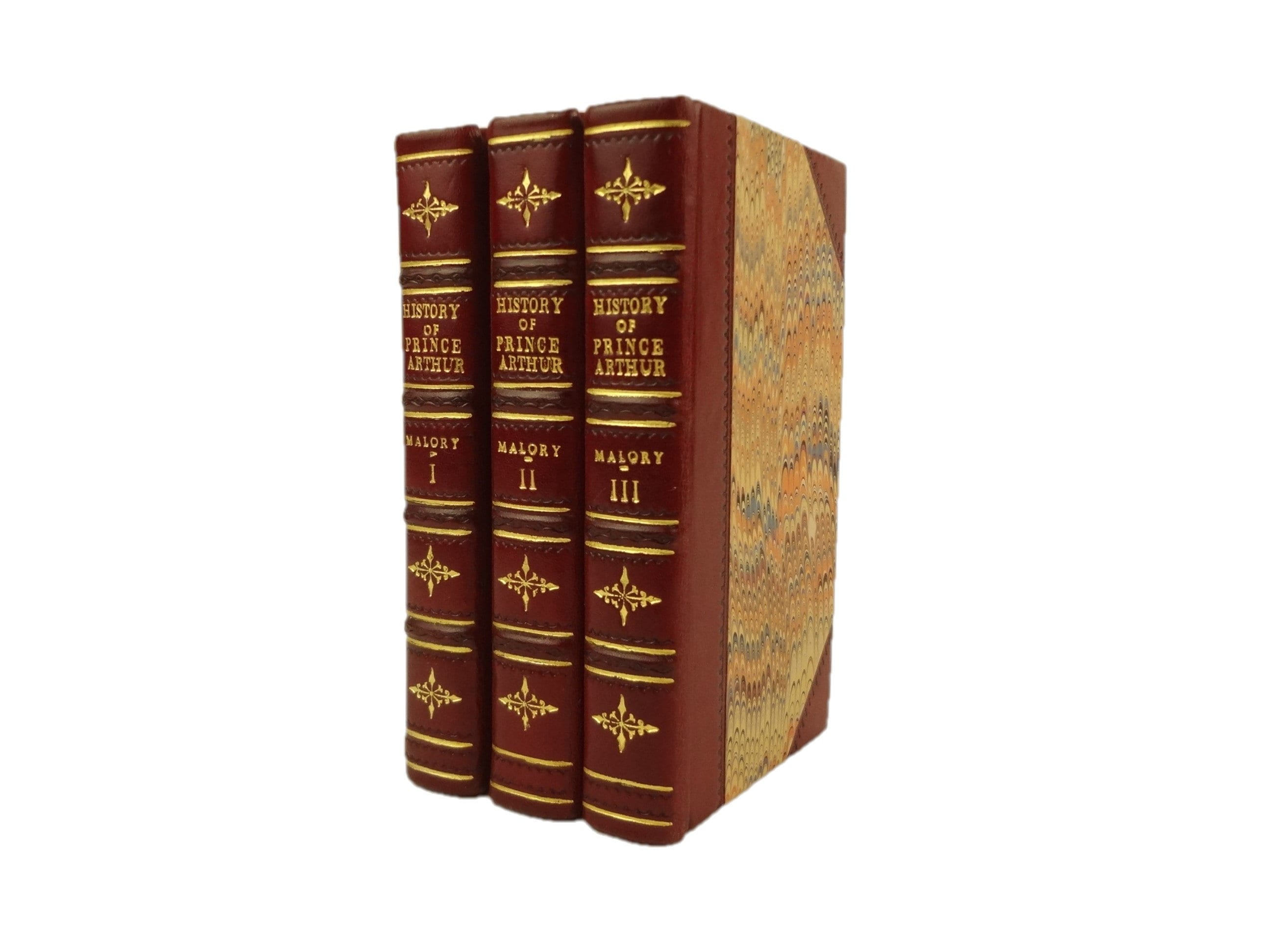 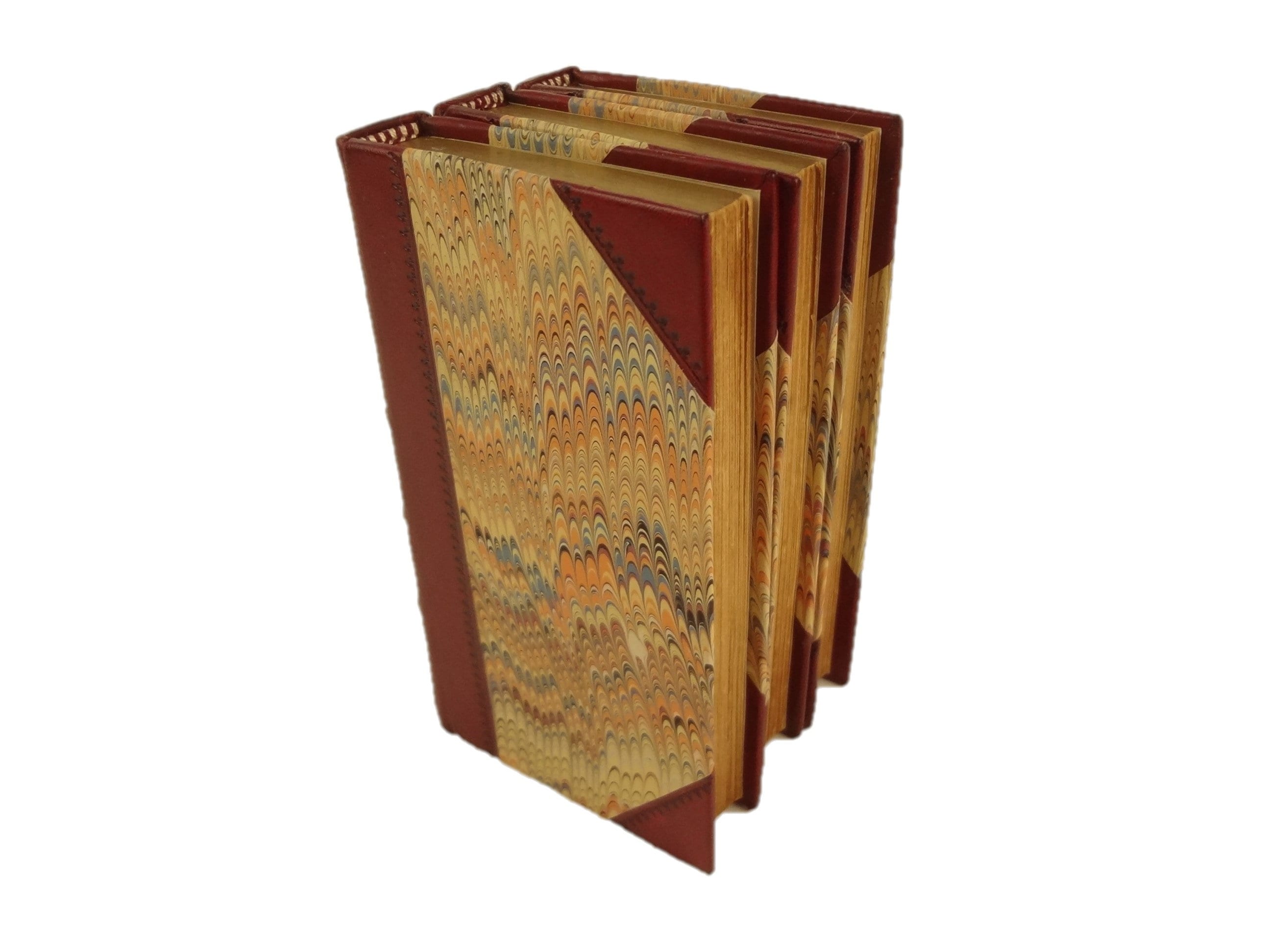 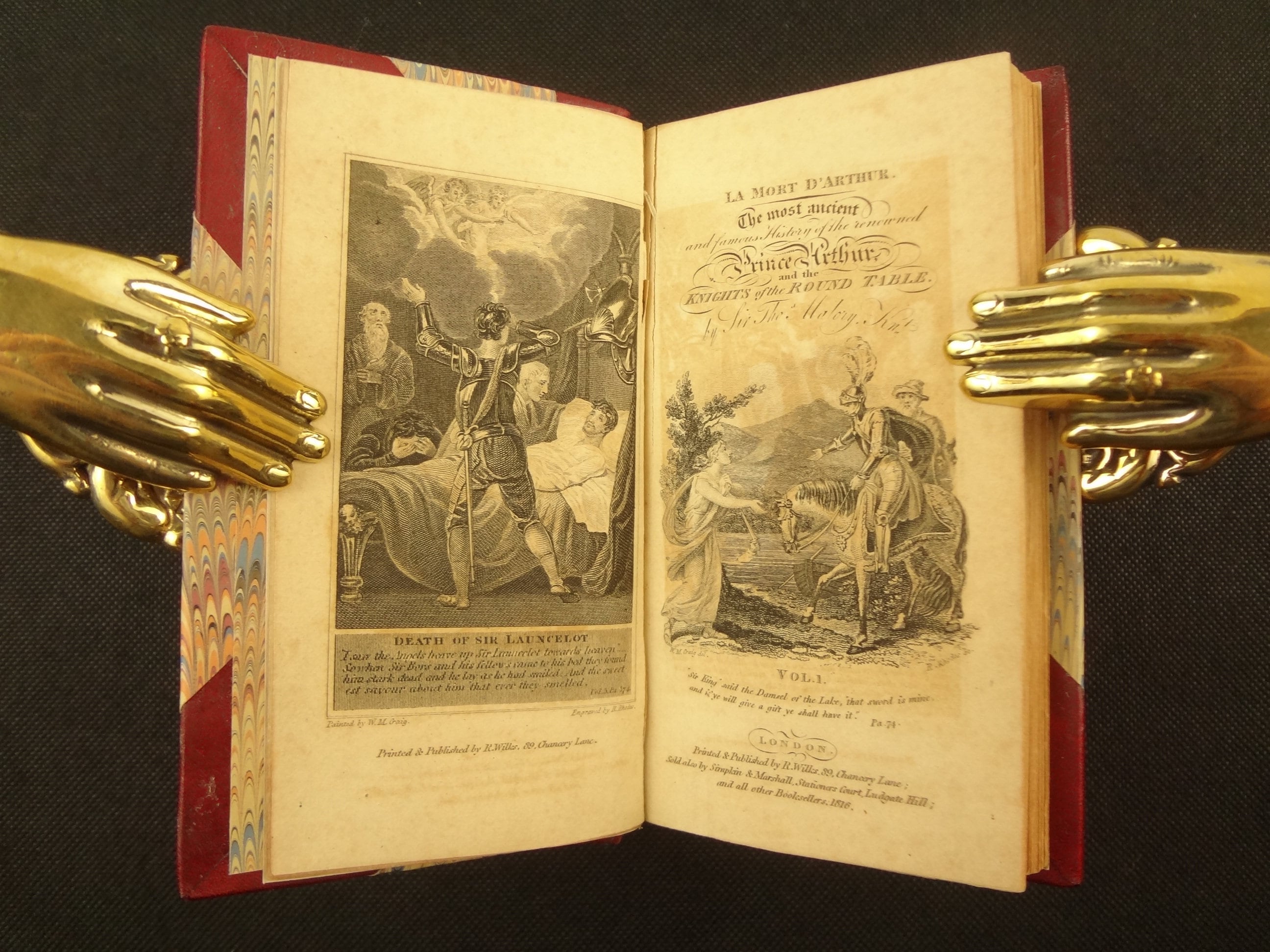 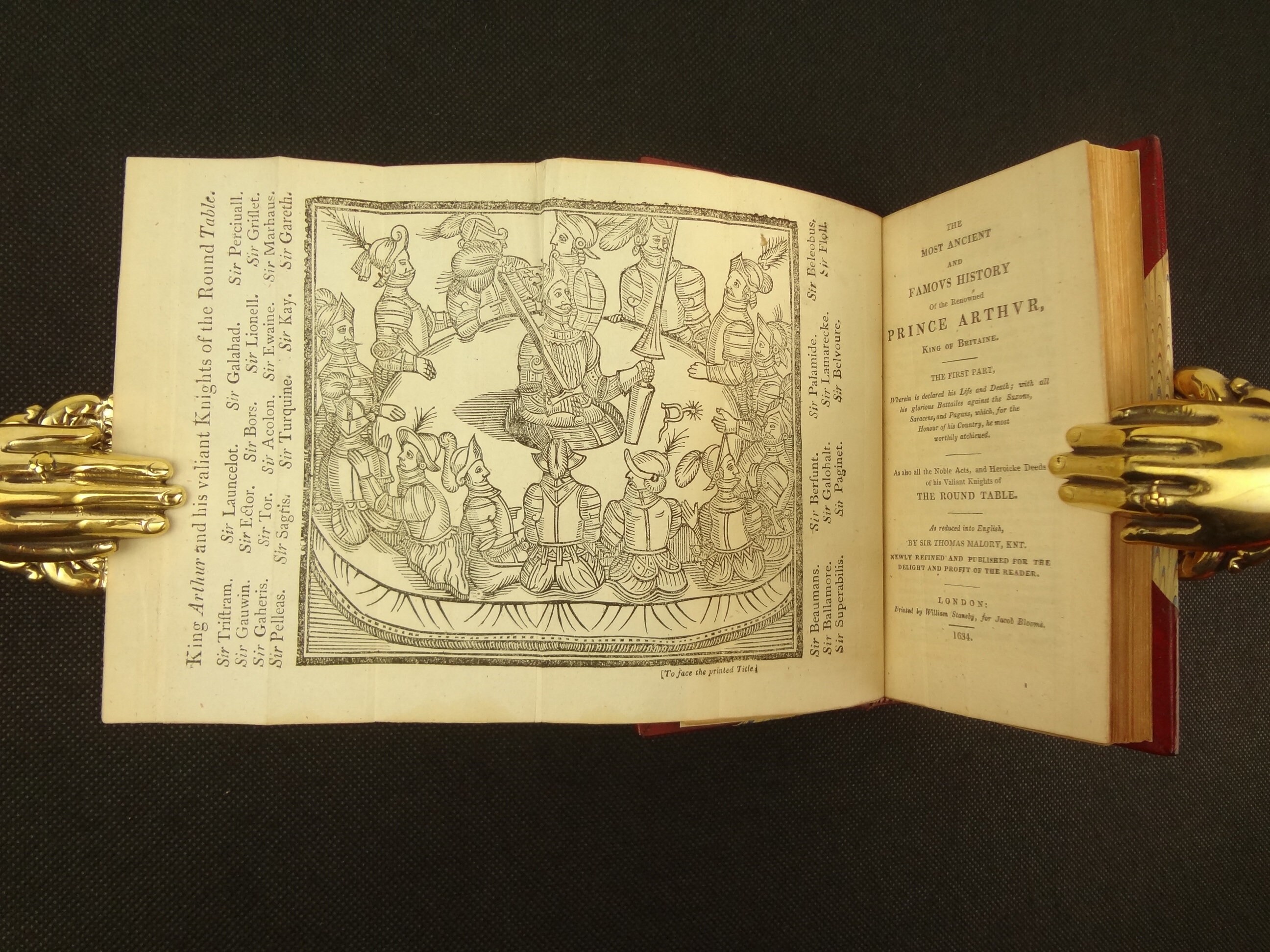 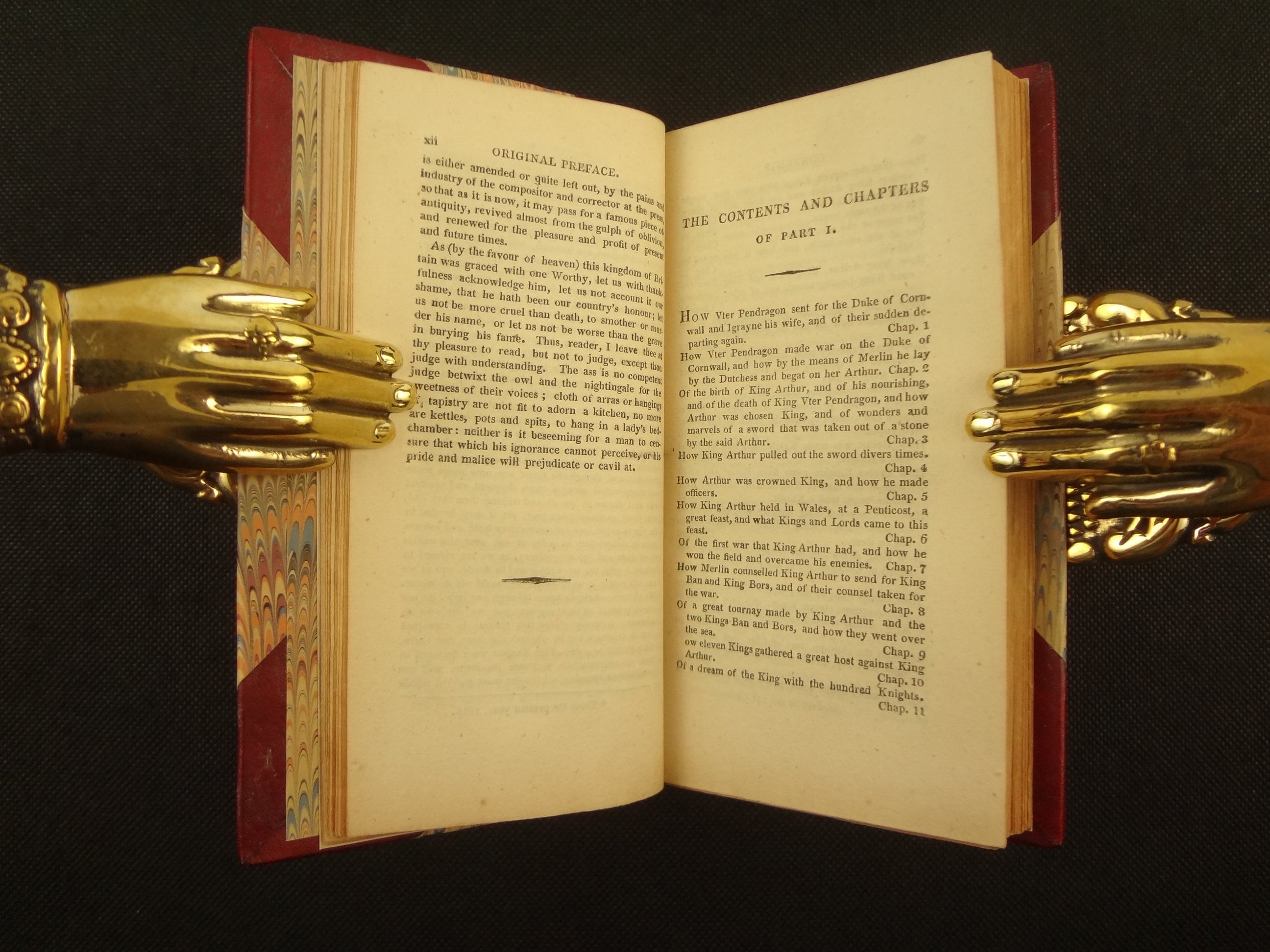 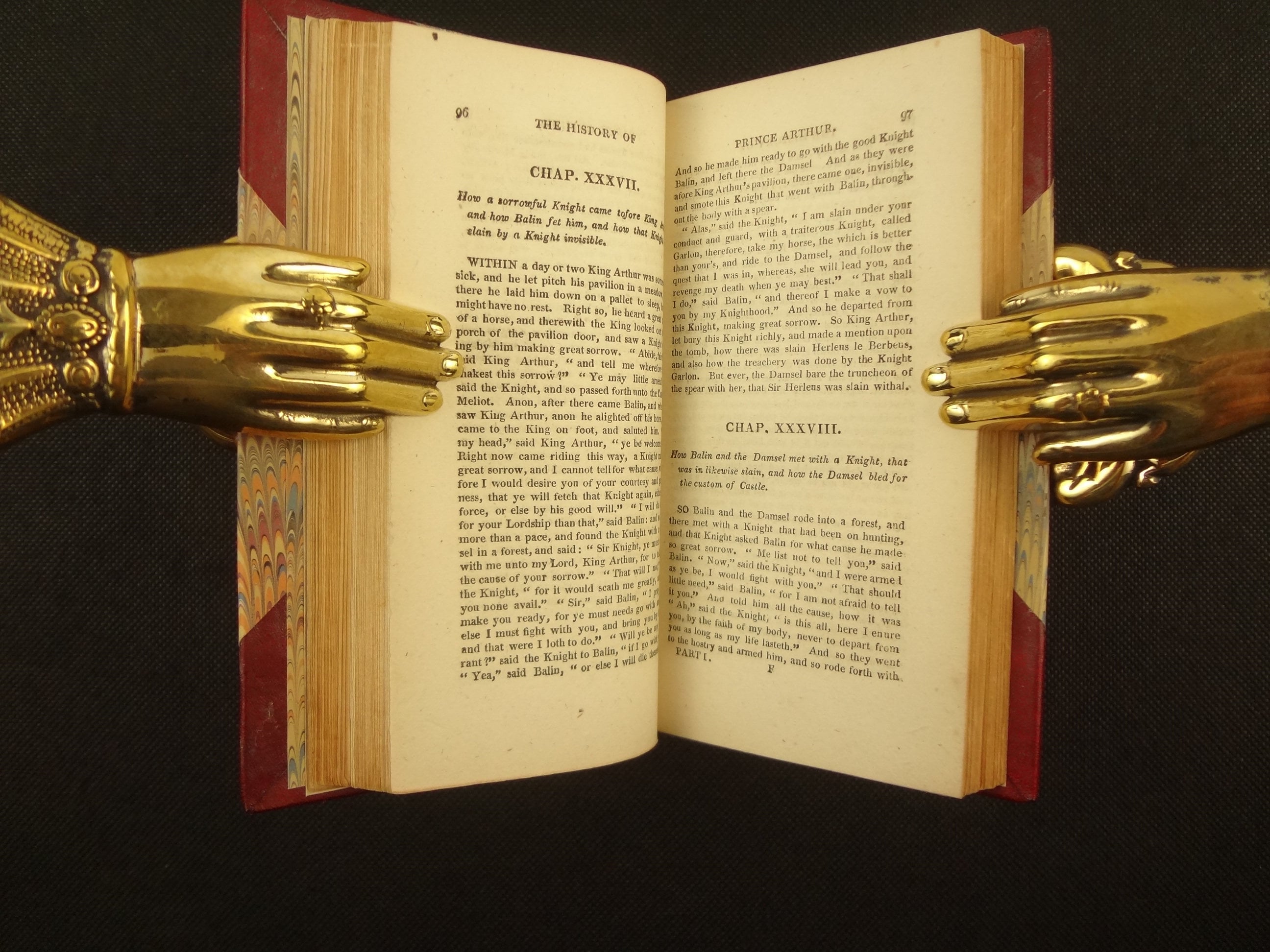 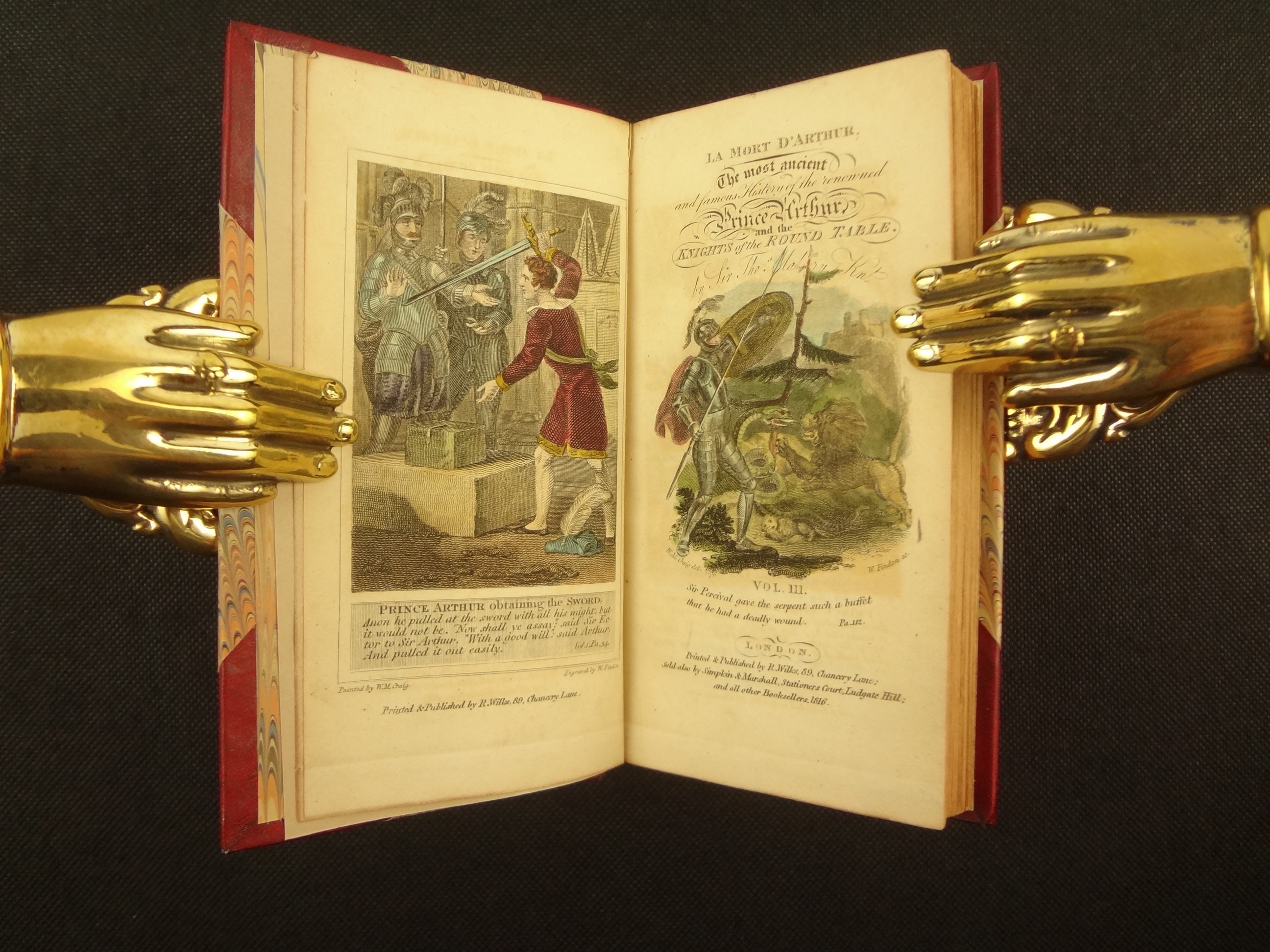 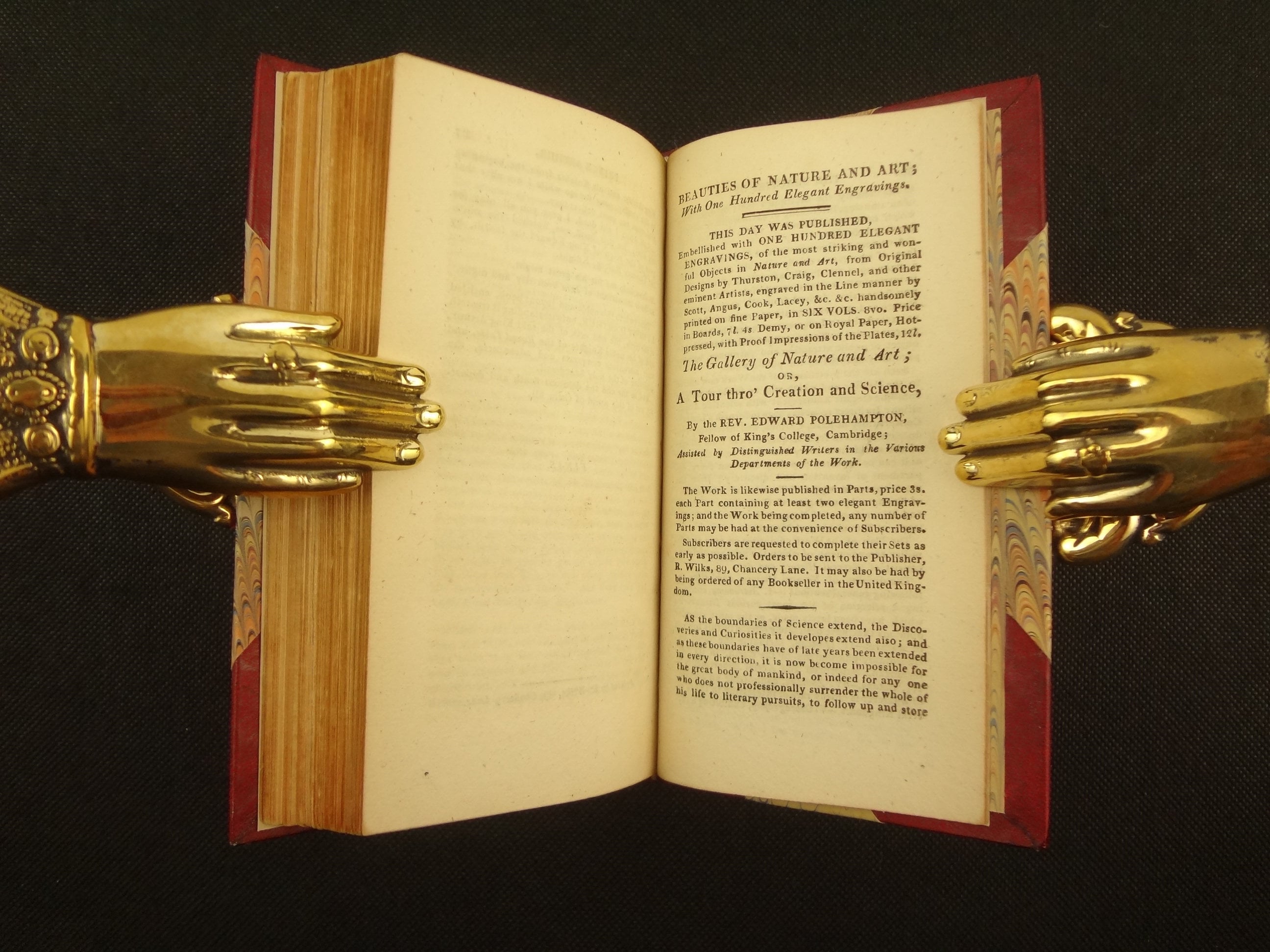 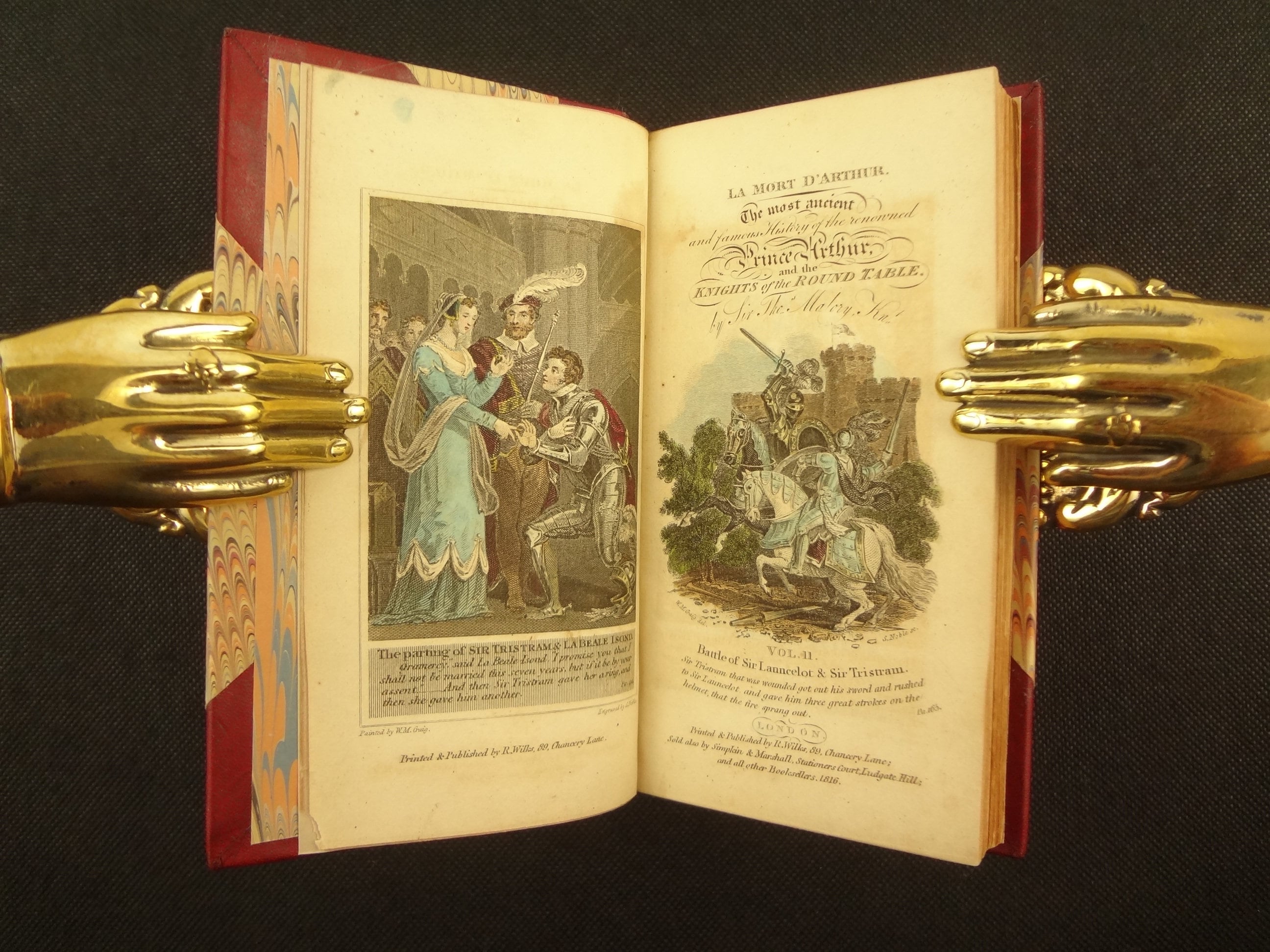 1816 La Mort D'Arthur, The Most Ancient and Famous History of the Renowned Prince Arthur and the Knights of the Round Table. Thomas Malory.

An early, and important, edition of Sir Thomas Malory's Arthur; two competing editions were published in 1816, this being the better edition (more complete, better illustrated). These 1816 printings were the first printings since 1634; only six editions were made prior to the 1816 printings (1485, 1498, 1529, 1557, 1585, 1634), of which few copies survive and seldom come to market (commanding sky-high prices when they do). The 1816 editions are often considered the earliest attainable editions of this work.

The advertisement, at the beginning of volume one, makes the case why this is the better of the two 1816 editions. Both are drawn from the 1634 edition, but only this edition recognizes that the 1634 edition erroneously skipped a leaf, when copying from an earlier edition; this edition reaches farther back and reinserts the missing text. Caxton's preface is included in this edition (and not the other). This set boasts two more engravings then the other 1816 printing. Also, this edition includes the original wood engraving of the knights at the Round Table, as a fold-out.

Malory's work is filled with chivalry and romance, and these 1816 printings of the Arthurian tales are accredited with helping perpetuate the Romanticism movement of the 19th century.

This copy has the fold-out, all three frontis illustrations, all three engraved title pages, and the advertisements bound at the rear of volume three. Its only possible shortfall is it's unclear if the coloring of the illustrations in volume two and three was done as a period embellishment (pochoir, which was popular in this period), or if it's a later personalization.

Each volume measures approx. 14 x 8 x 2 cm. Burgundy-red crushed calf spine and corners, with marbled paper covering the boards. The calf ruled in blind with a small clover tool. Spines with five raised bands, ruled with a gilt fillet and also some blind rolls; three compartments with a central gilt compass rose, one compartment with the title in gilt and the last compartment with the author and volume in gilt. Top edge gilt. Marbled endpapers. Purple and white endbands. Illustrated with three frontis, three engraved title pages, and one fold-out of the Round Table. Advertisements (for other books, not to be confused with the advertisement in volume one) bound at the rear of volume 3.

See pictures. Fresh bindings, but the text block edges were not recut; they books have been well-kept as evidenced by the largely dust-free top edges.

Toning and ghosting to the frontis and facing title pages of all volumes. Title pages and frontis of the second and third volume have been colored; very well-done, I'm unsure if it's contemporary coloring in the pochoir style, or a later addition. There's a pin-hole in the upper-right of the foldout plate. The foldout plates folds have left light impressions on the title page of volume one. 1 cm light ink mark on v1 266. Graphite bookseller mark on the last printed page of each volume. Light toning throughout, with an occasional foxing spot. Dab of blue at top edge of v2 frontis. Silk ribbons in place but expired at top edge.

I've nitpicked, but looking through these volumes I gather the impression they were lightly used, if ever. Clean text and tight text blocks with nice margins.