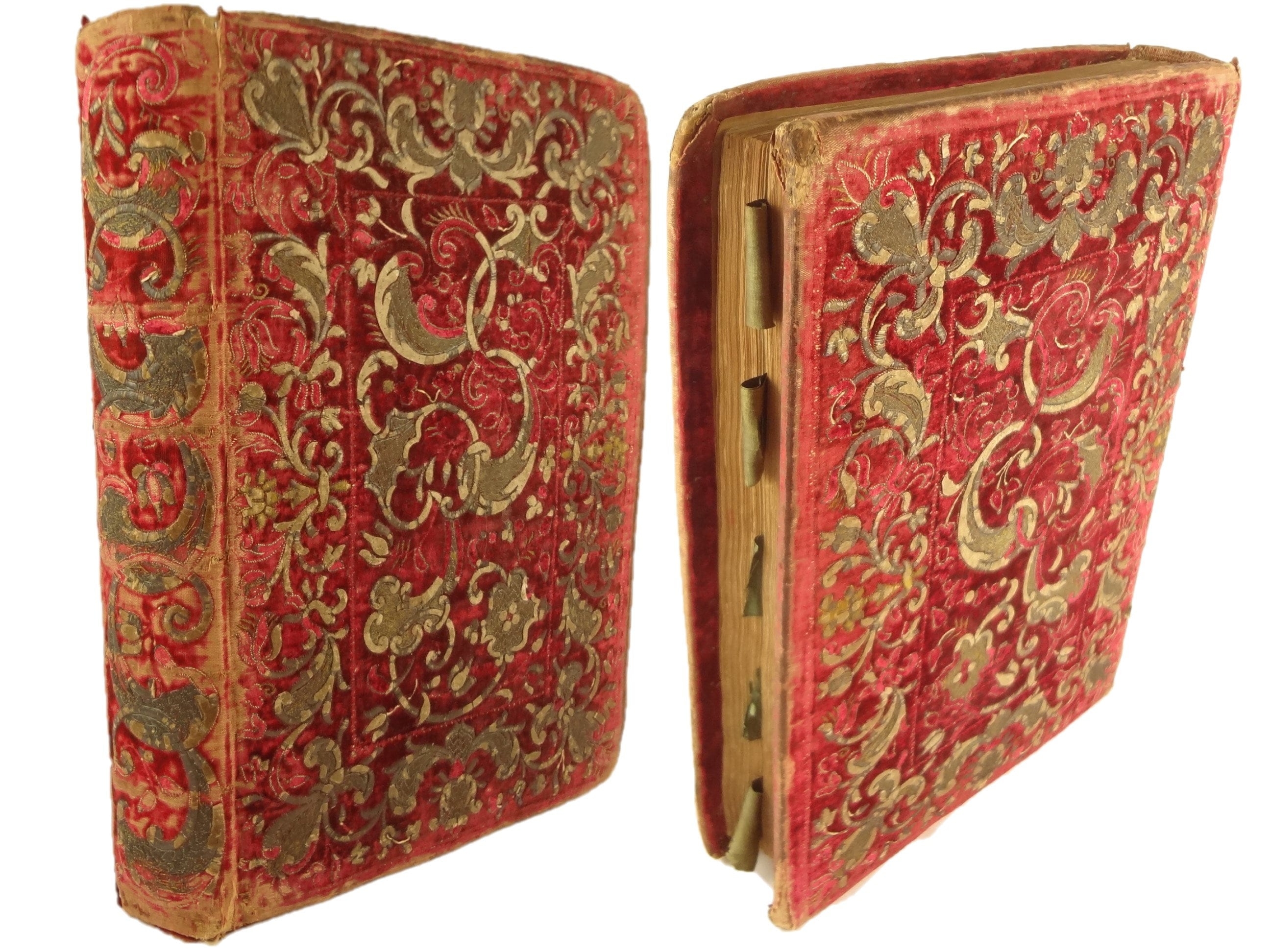 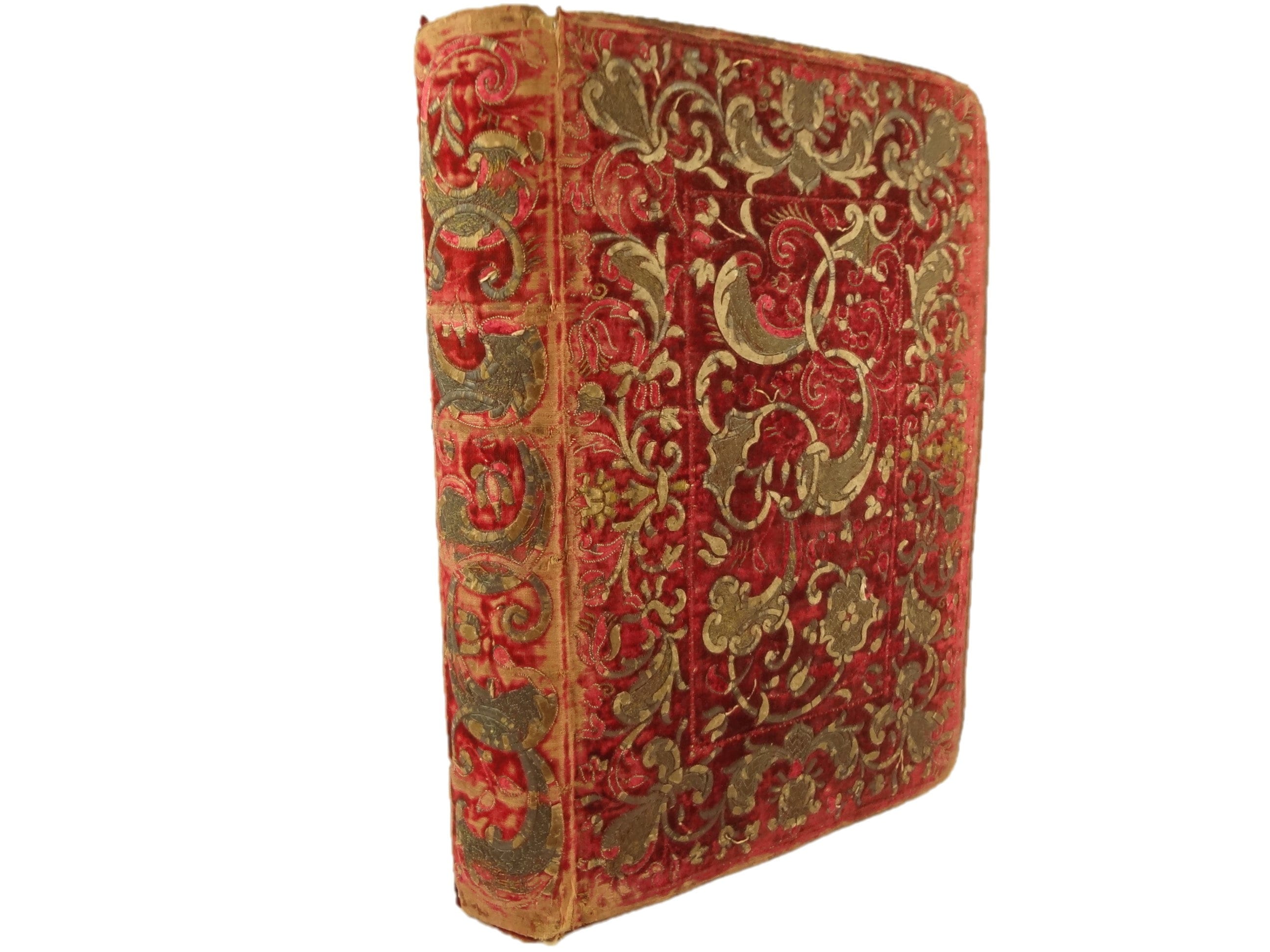 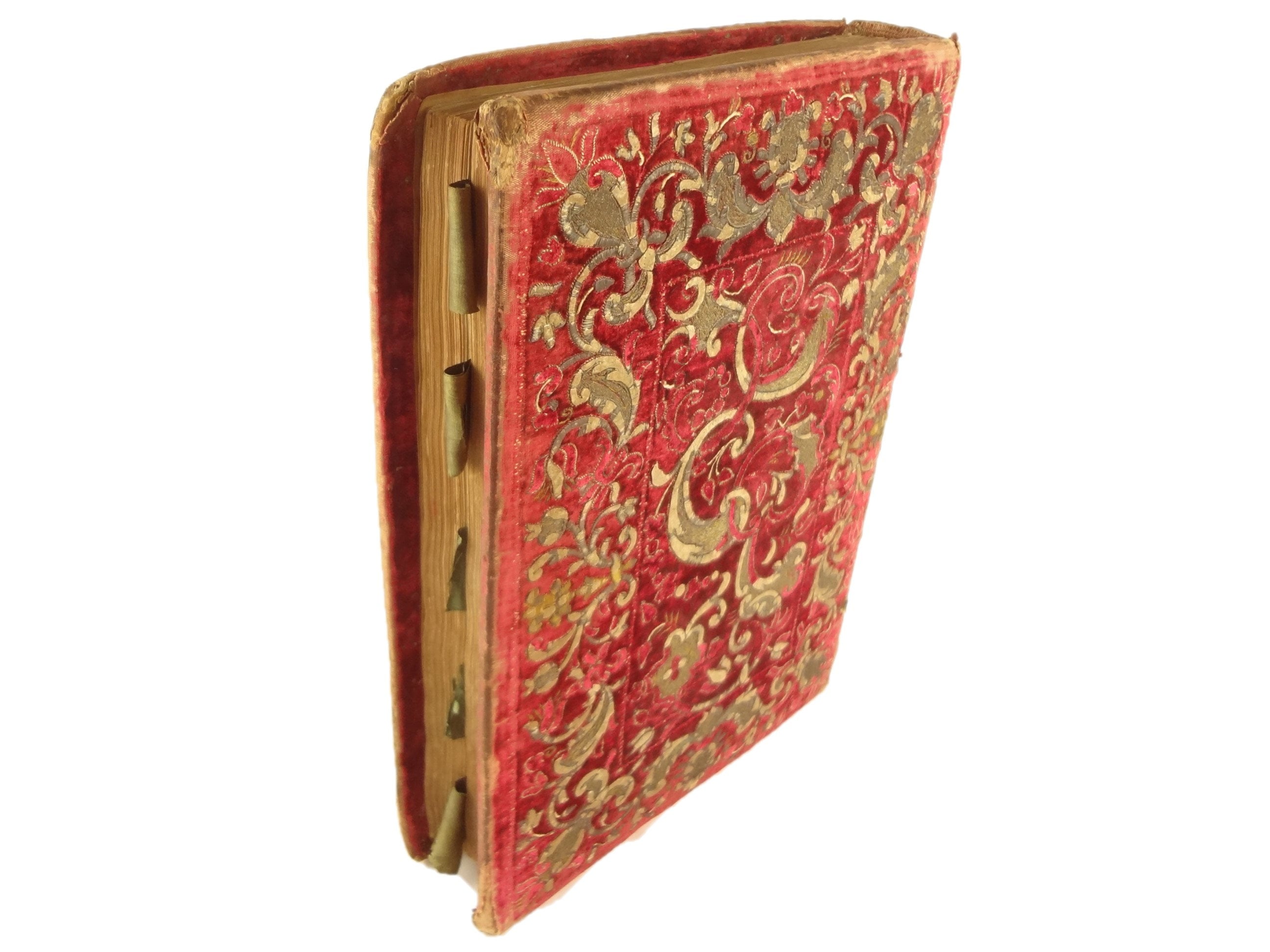 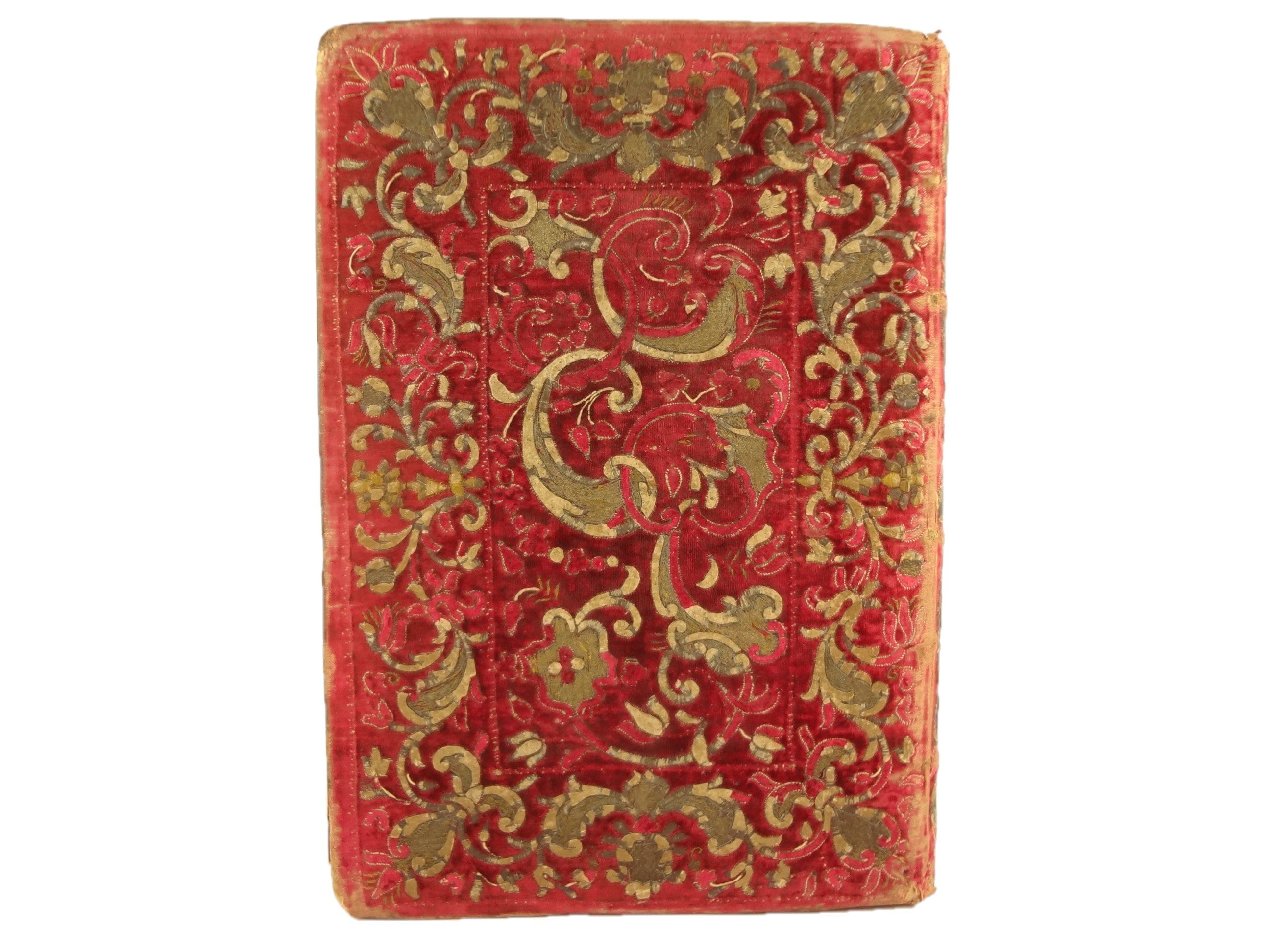 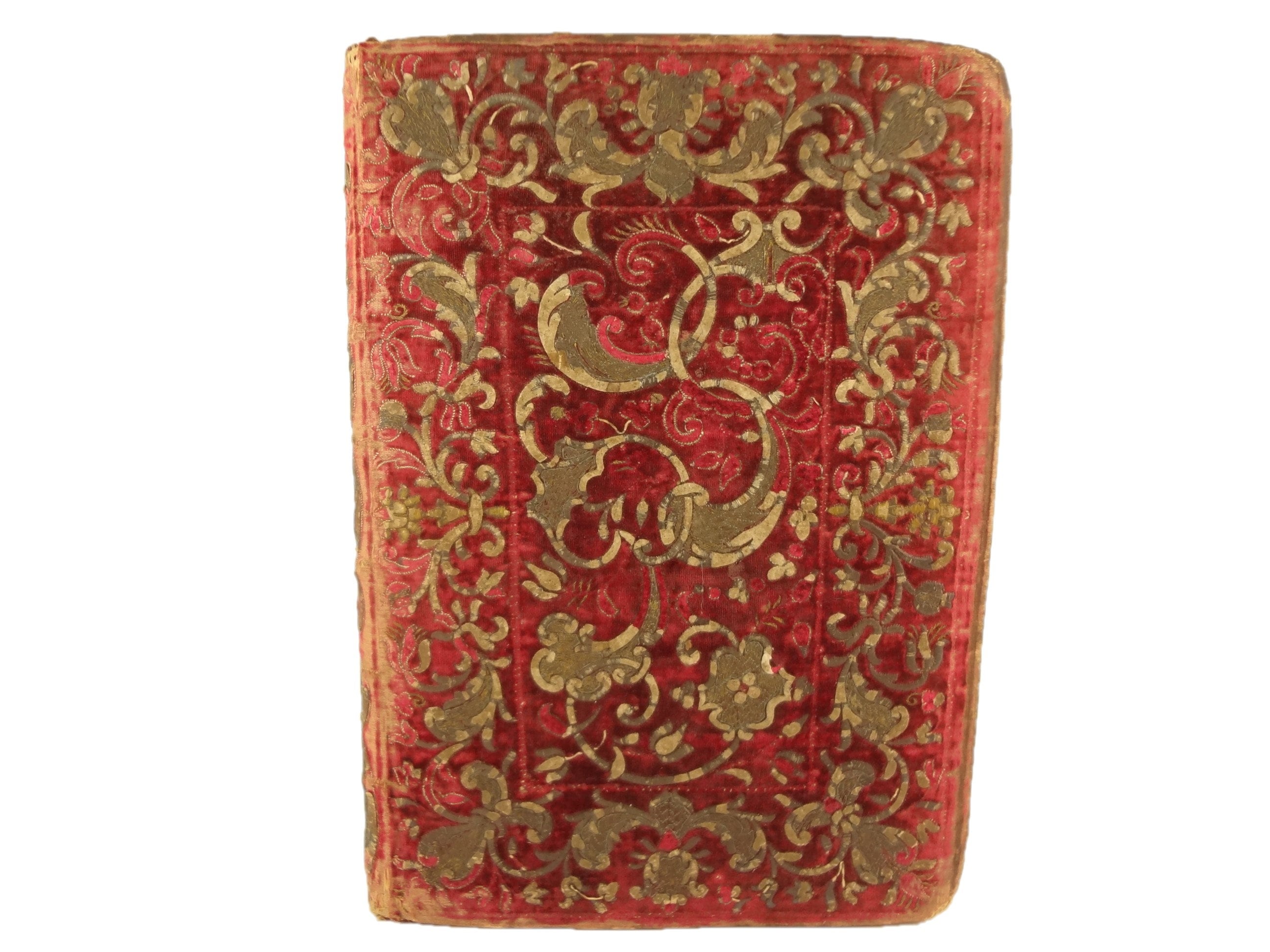 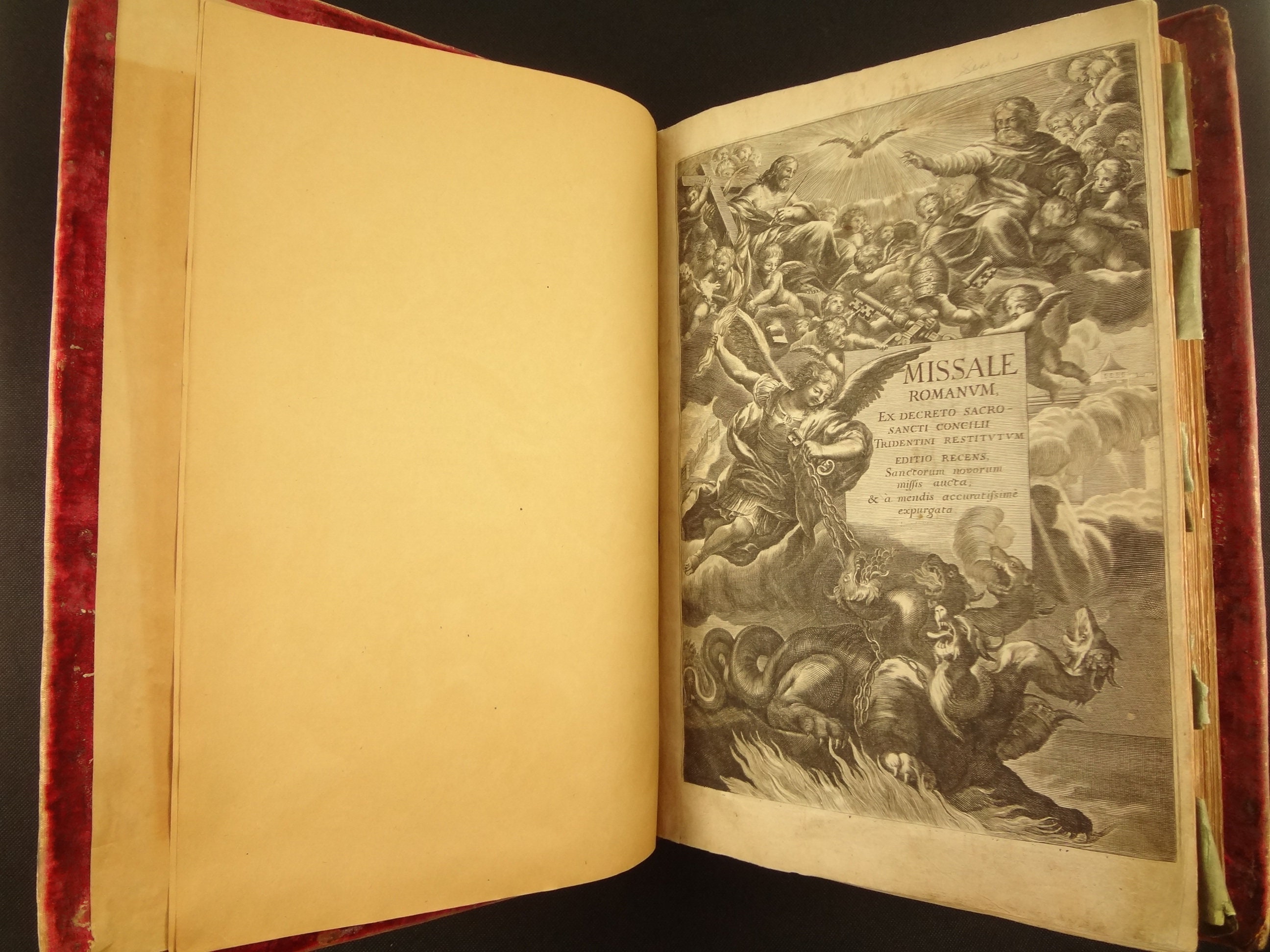 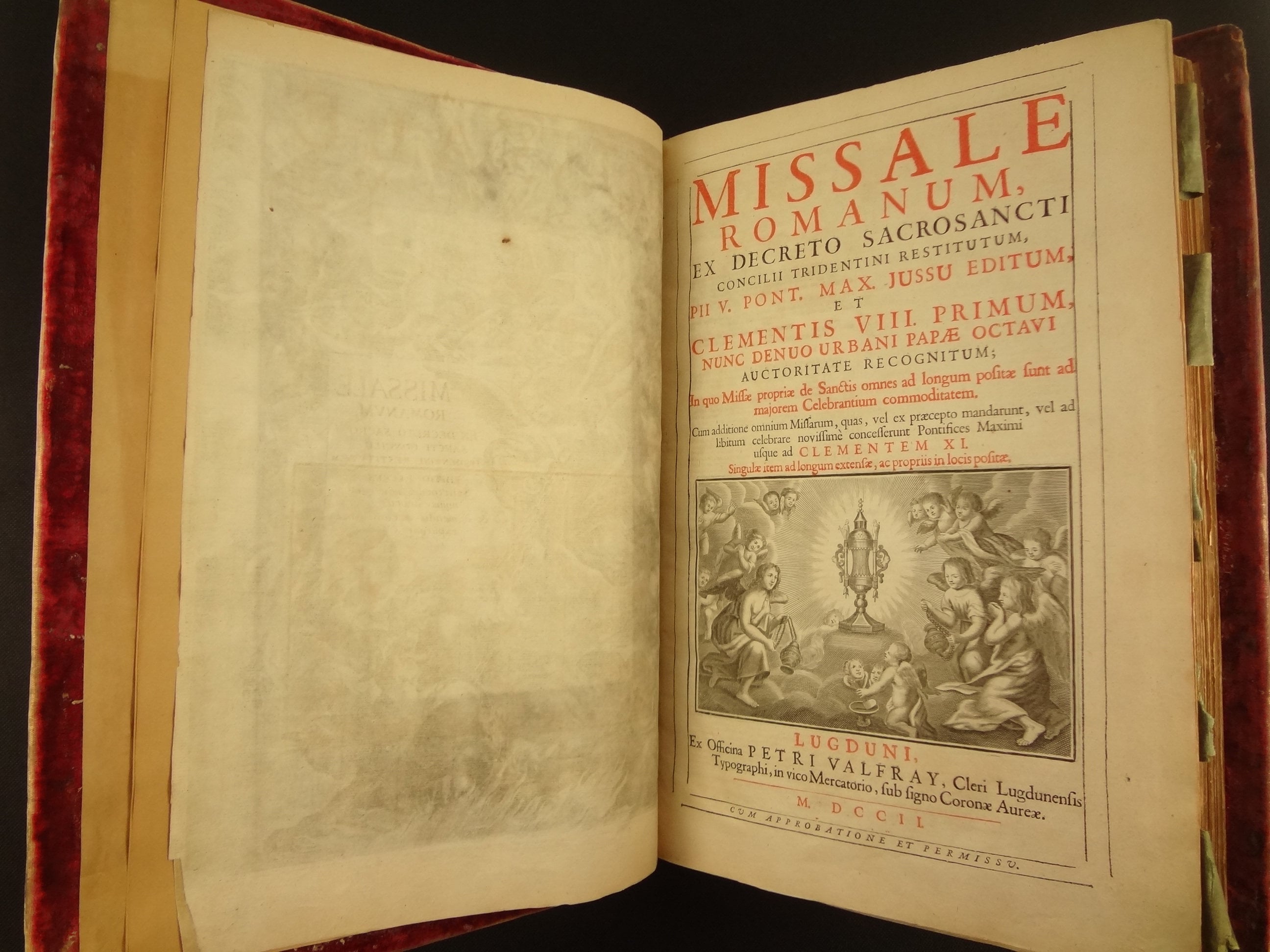 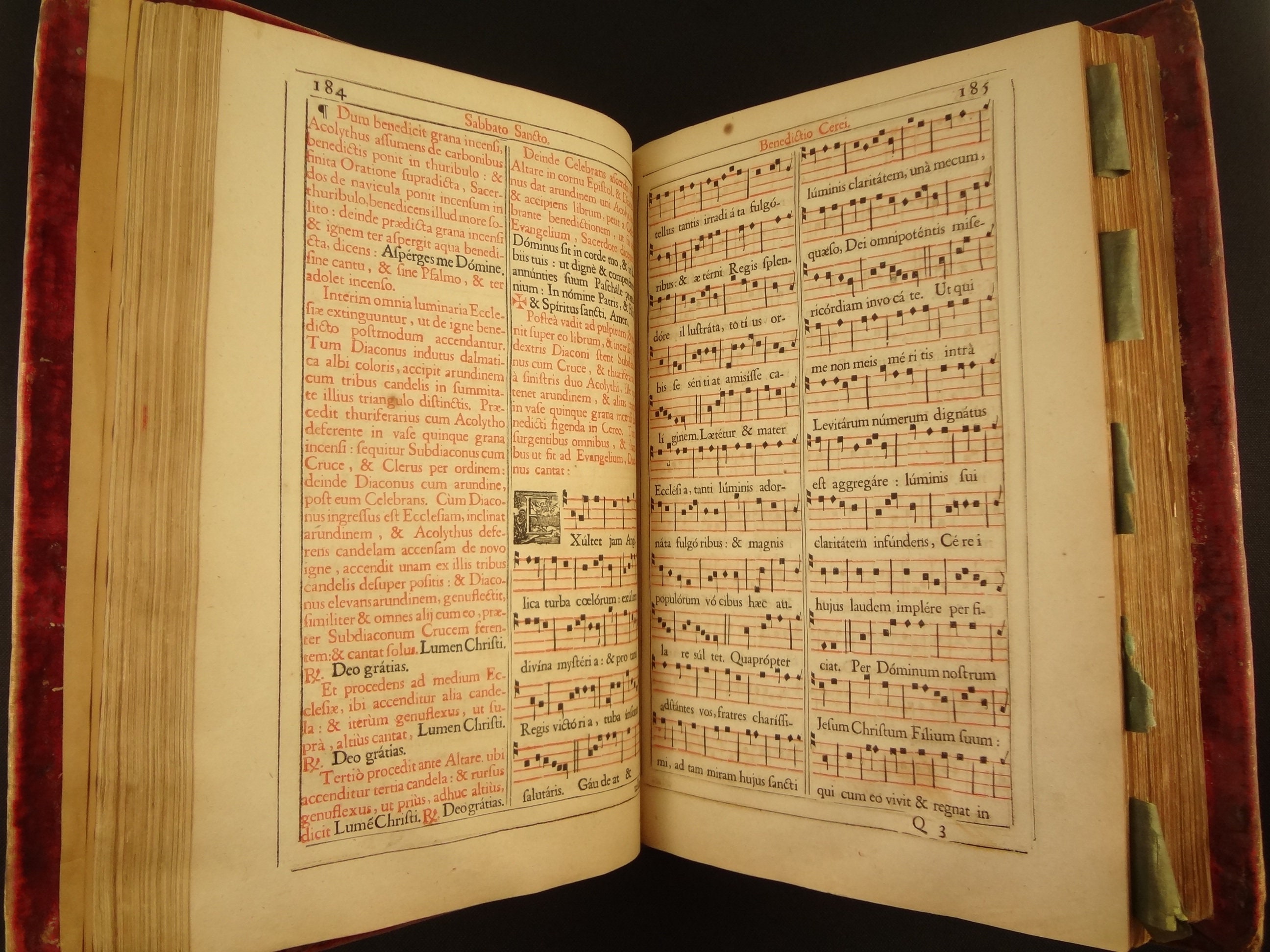 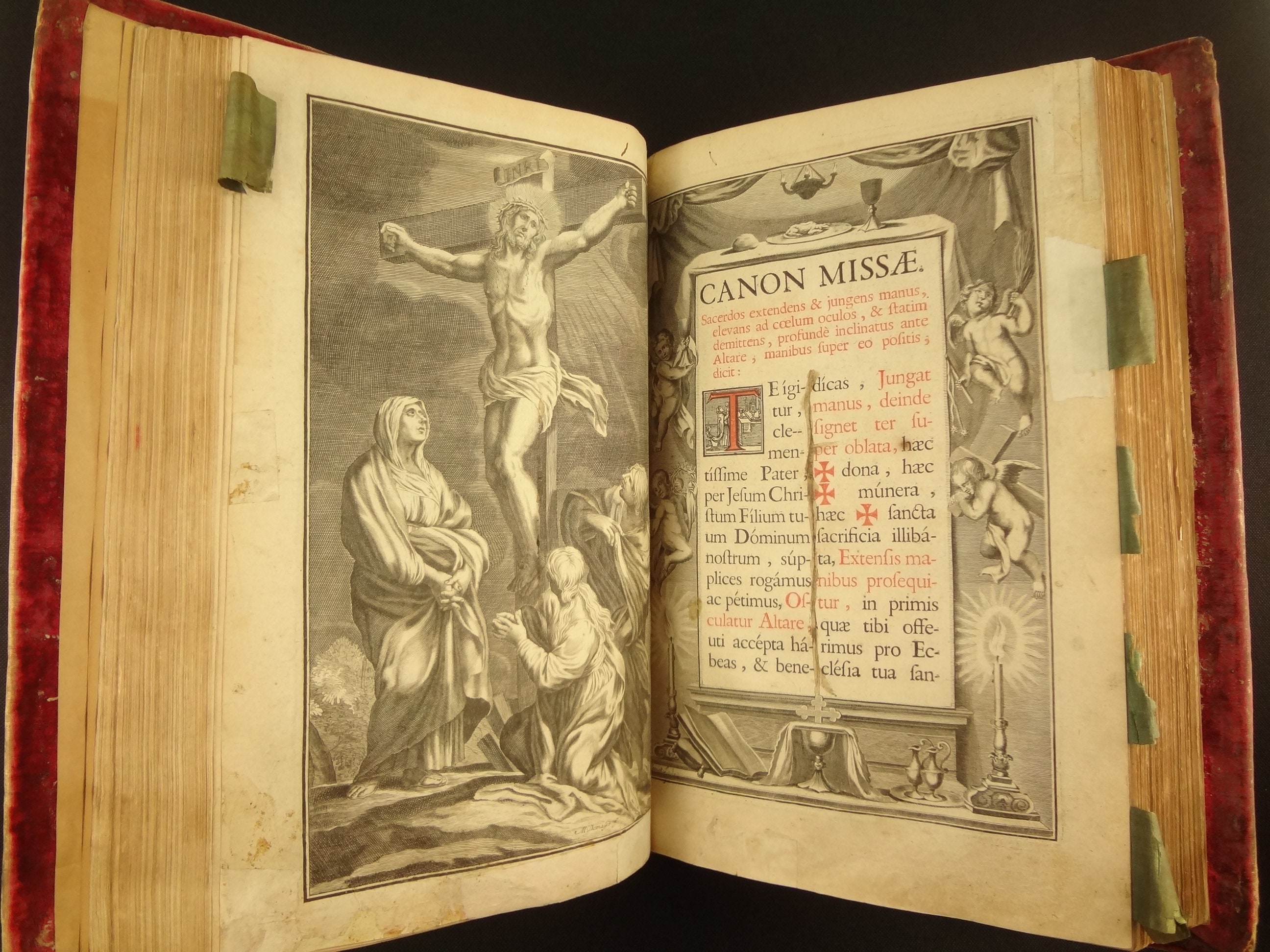 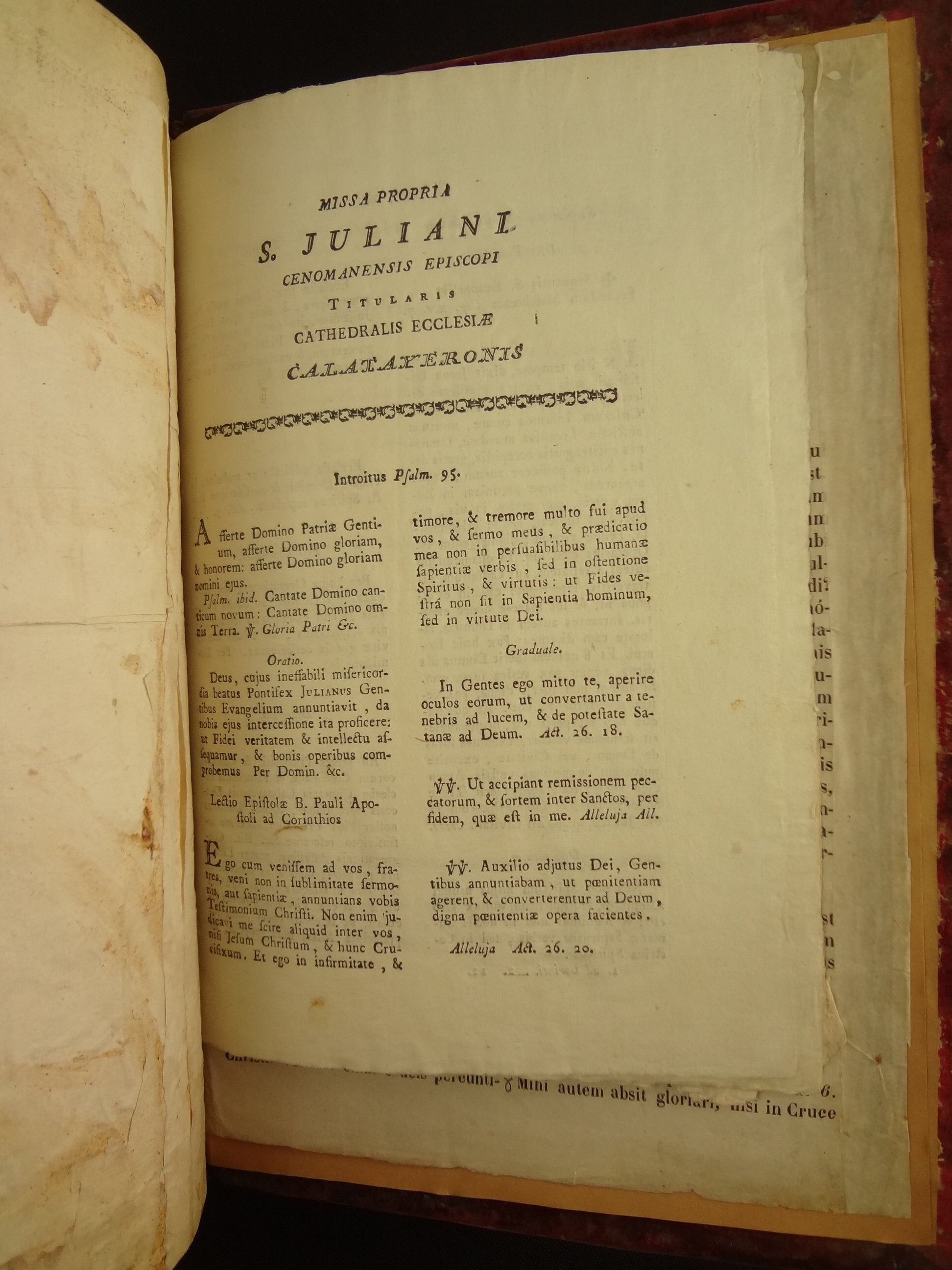 The embroidered binding was a bookbinding style from the 15th to 18th century; it was largely popular among the affluent in England, in the 16th and 17th century, but went into decline after the English Civil War. You can find Cyril Davenport's work on English Embroidered Bindings on Google Books, available to view at no charge. Davenport's work shows many embroidered bindings were in the collections of nobility and often bore their initials, coat-of-arms, etc..

This example hails from Italy. We discussed the book's likely Italian provenance, but a second clue is the binding itself. The British Library holds a 1705 Missale, whose binding is quite similar, which can be seen online in their Database of Bookbindings, shelfmark C188c5, which they also accredit to Italy.

This printing is well-illustrated and exhibits handsome typography . An exciting full-page frontis begins the volume. The title page hosts a large allegorical printer's mark. The book is printed in red and black, with the red used for rubrication including rubricating large inhabited initials. Eleven full-page engravings begin the sections of the book, with full-page engraved borders on the facing pages. Also, numerous sections with sheet music showing the staffs, with notes, in red and black.

I'd like this book to go to an institution who will prepare appropriate storage for it. As time goes by, embroidered bindings from this period are going to be subject to more decay due to the fragile nature of velvet, etc.. I would prefer this example to be saved from the decay of time, as best possible, and sometimes exhibited. For the last ten years, this book has been bouncing around the market (Chiswick, Millea Bros, D and D Galleries) since it came out of the Estate of Marian and Jacob Javits.

Also, on the note of provenance, the "Sesslers" written at the top of the frontis, may refer to the Philadelphia rare book dealer Charles Sessler, active circa 1900.

See pictures. Binding with some loss of velvet, and thread, exposing their bases. Edges and corners worn, pasteboard coming through at the corners (and bumped). A little damage to the velvet at the bottom of the spine. Thread largely dulled, some of the silver and gold threads on the rear board still shine in light. Hinges with cloth strip strengthening them.